It’s the last Wednesday of April . . . and it feels like I just did WUW for the last Wednesday in March. Quarantine time (Quarantime??) is moving along pretty quickly, and that’s a good thing because we have at least three more weeks (but possibly FIVE!) to go.

Quite some time ago my mom introduced the girls to peanut butter and cucumber sandwiches, and they love them! I must admit, Matty and I were skeptical but they’re actually pretty delicious!

I’m still going strong with my frittata and fruit in the mornings.

Last night we made some homemade meatballs that were delicious. I’ll share the recipe soon!

What I’m Reminiscing About

This picture was right near the one I just posted, and I couldn’t resist tossing it in here.

As the weather gets warmer, we’re also reminiscing about just how much Emily sweats!! These two pictures are from a particularly hot 4th of July at the cottage, and I promise you she had not just come out of the water in either of these pictures!

Honestly, I’m loving quarantine schedule! While it certainly feels like the days all run together, I’m definitely enjoying the lack of commitments. In fact, Lucy has a Zoom call every Wednesday at 11am with her preschool class. Now that I’m so used to having nothing on the schedule, it kind of puts a damper on my Wednesday mornings because we actually have to be PREPARED for something at a certain time. #heavenforbid

I’m also loving these new sandals I ordered from Target! I love that there’s a slight wedge to the heel. I’ve been wearing them around the house to break them in, and they seem super comfy!

What We’ve Been Up To

Lots of imaginary play . . . and a lot of mess to straighten up!

We discovered a new favorite spot on our walks. The girls love to run in the grassy area around the pond and throw pinecones in the water.

Oh, and Lucy is back to finding all sorts of bugs while playing outside. #ugh

Finishing my class for my teacher certification. I need to just do it and get it off my mind. Easier said than done, though.

What I’m Working On

Five seems like a big one to me, so I’m going to do my best to make it special. She’s been interested in getting her ears pierced, so I originally thought that would be her main gift. Then the Coronavirus happened, and I don’t think we’ll be getting out anywhere to get ears pierced anytime soon.

But, I have another trick up my sleeve, and it involves this 30 year old dollhouse that I had when I was a little girl!

I’m still working my way through The Good Wife. I’m on season two and really enjoying it!

Matty and I just finished up watching Waco on Netflix, and I have ALL THE THOUGHTS.

First of all, I was riveted. I believe it had six episodes, and I was on the edge of my seat for the first five. What was I doing during the sixth episode you ask? I alternated between being on the edge of my seat, covering my eyes, doing deep breathing exercises to try and calm down my heart rate, and pausing the show to let loose my thoughts and opinions.

You guys, Waco happened in 1993, which means I was eleven years old. I’m assuming that means my parents must have shielded me from the nitty gritty details. To this day I knew about Waco, David Koresh, and that there was a stand off, but I promise you this . . . I TRULY HAD NO IDEA HOW IT ALL ENDED!!! And now I do. And because there aren’t many survivors, we don’t really know how it all went down inside the compound, so all I have to go on is what Netflix showed me. So . . . if you want to really enjoy a show until the last episode and then go to bed feeling like total sh!t, this is most definitely the show for you!

A very good friend of ours wrote a children’s book!

Moon Puppets is the cutest book about a little girl who is determined to make shadow puppets on the moon. It’s a rhyming book, which is so fun, the pictures are delightful, and my girls constantly choose it as their snack time story. It has also led to some fun activities, such as shutting ourselves up in a dark closet with a flashlight to make shadow puppets. We highly recommend it!!

As far as what I’m listening to, I’m currently typing this in bed with the windows cracked listening to some delightful night time sounds!

What I’m Doing This Weekend

Ha! That’s funny. I’ll be doing the same thing as everyone else in America! 🙂

Hopefully the weather cooperates so we can get some good walks in with these two sweet sisters.

Have a great weekend! Stay safe!

Linking up with Sheaffer and Shay. 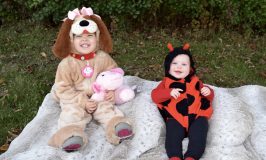 Happy Thursday! I still can’t get any new pictures onto my computer . . . and it’s only working well while plugged in . . . so today we’re just going to take a quick trip down memory lane to look at the girls’ Halloween costumes over the years. Spoiler alert: the cuteness level is […] 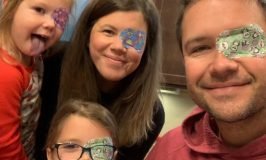 . . . the computer this time, not me! WHY?! It’s 5.5 years old, and Matty says it’s had a good life, but this is NOT the time for my laptop to finally give out. This is Christmas card season, family photo calendar season, and year-in-review blog post season. These things don’t happen overnight, and […]