Happy Thursday!
Everything we’ve done (or haven’t done, as weather permits) has revolved around the twelve inches of snow we got on Monday!
The news said 3-5″ so I didn’t really think too much about it when it was snowing when we woke up on Monday morning. Or even when it was still snowing at lunchtime. But it snowed all day long! Once Matty finally made it home, he went out to blow the snow around 6pm and couldn’t believe how much we had gotten. By the time we put the girls to bed at 8:00 we had gotten another few inches and had to go out and shovel again. Crazy!
All told, we ended up with about twelve inches and the girls loved it!
We went out to play as soon as we picked up Lucy from school on Monday. Everyone was still in school or at work, so it was a super quiet winter wonderland. 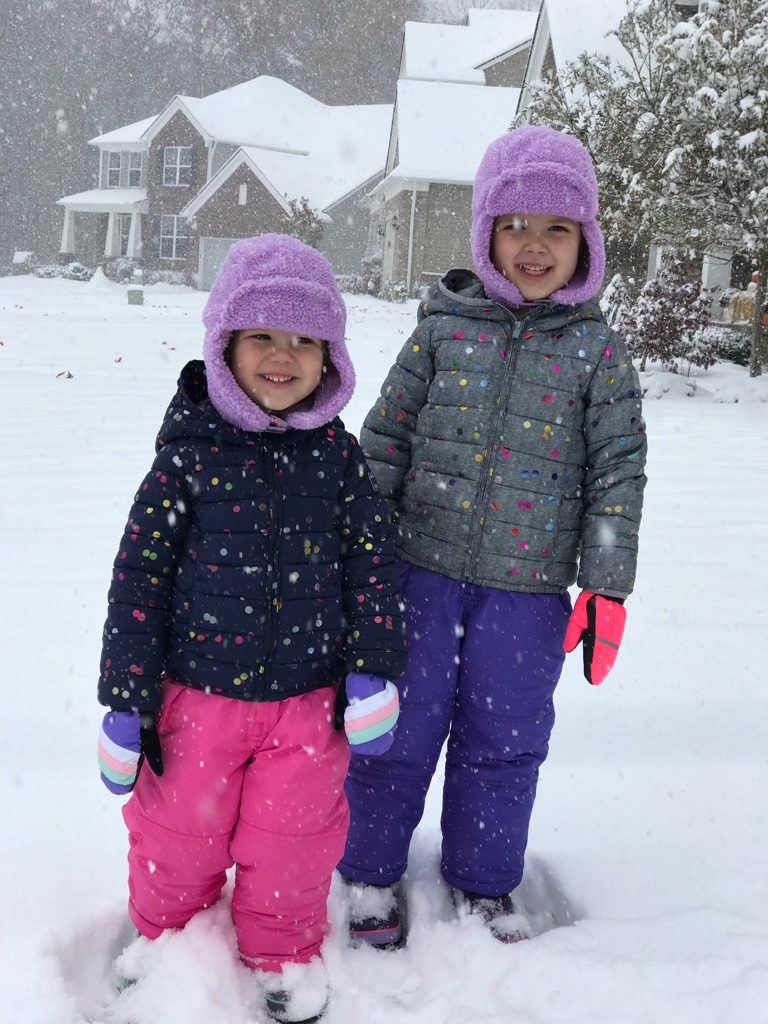 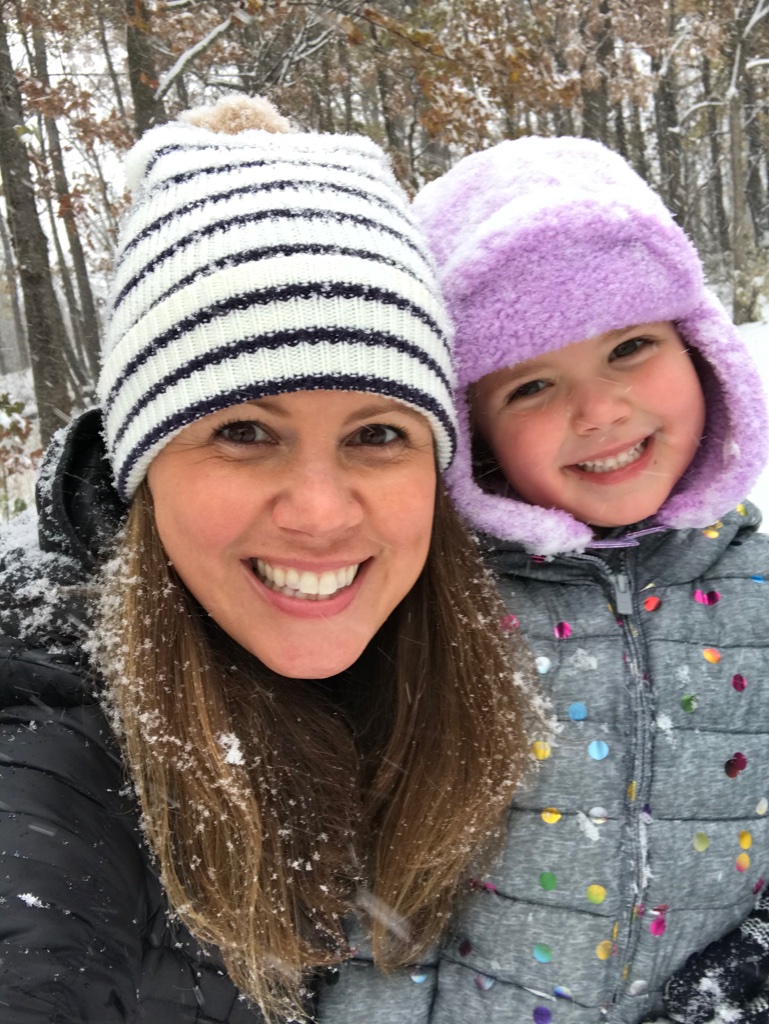 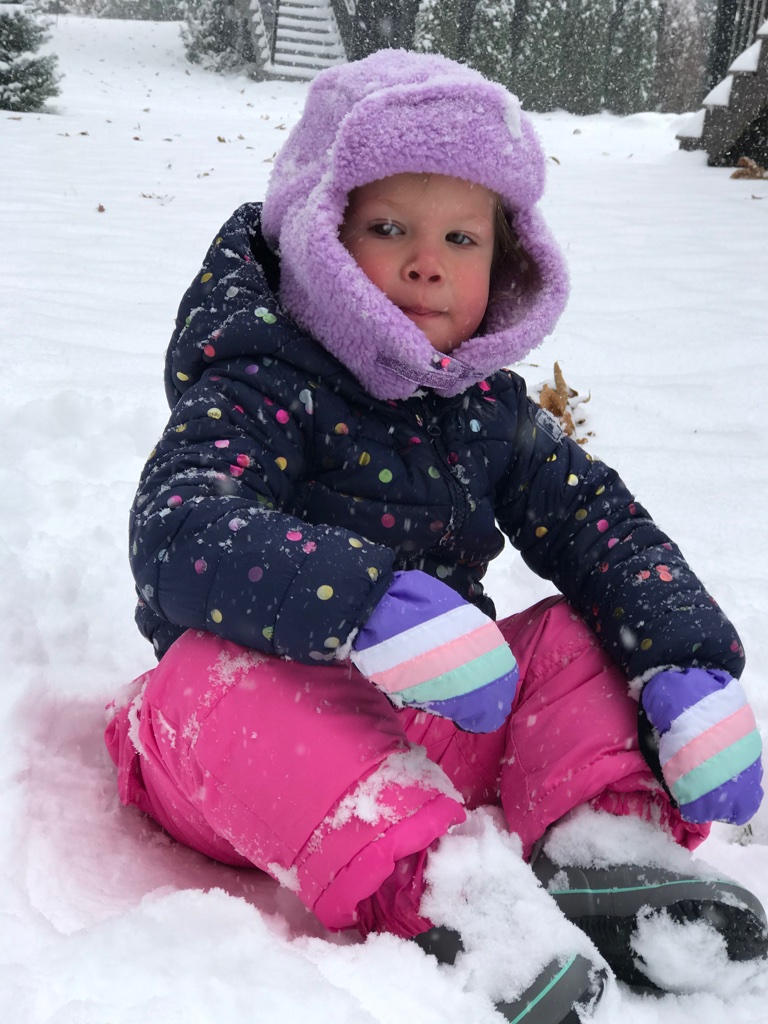 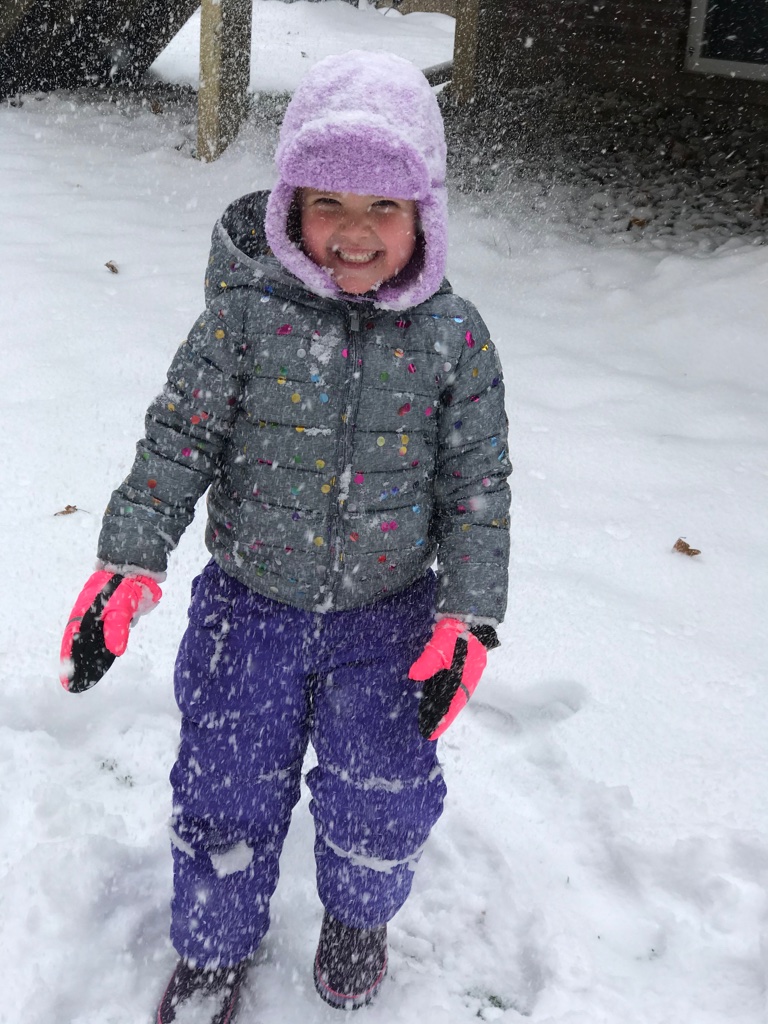 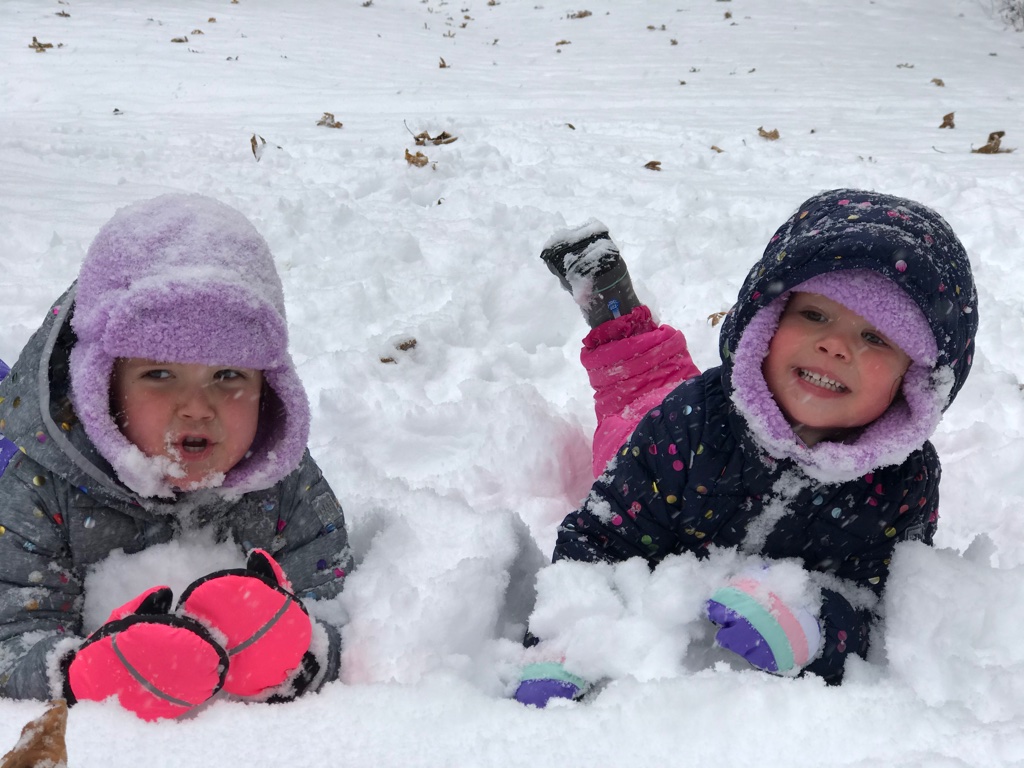 So. Much. Sledding.
We probably went up and down our hill 20 times! 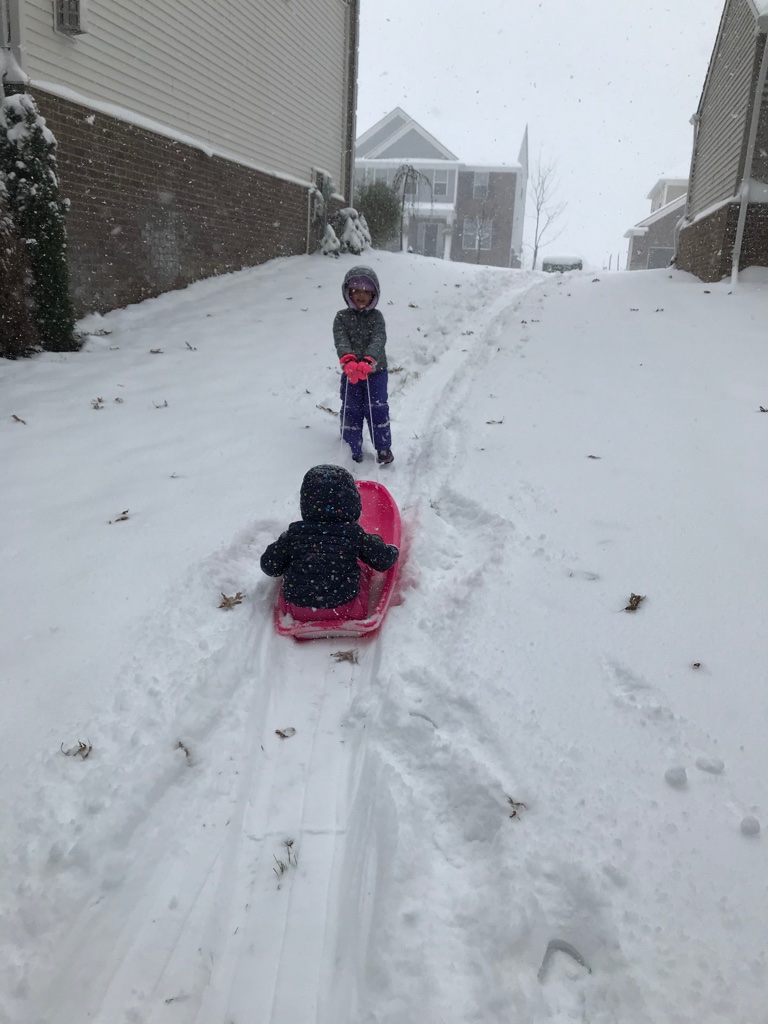 I was most definitely ready to go inside and warm up, but these sweet girls were having a blast! 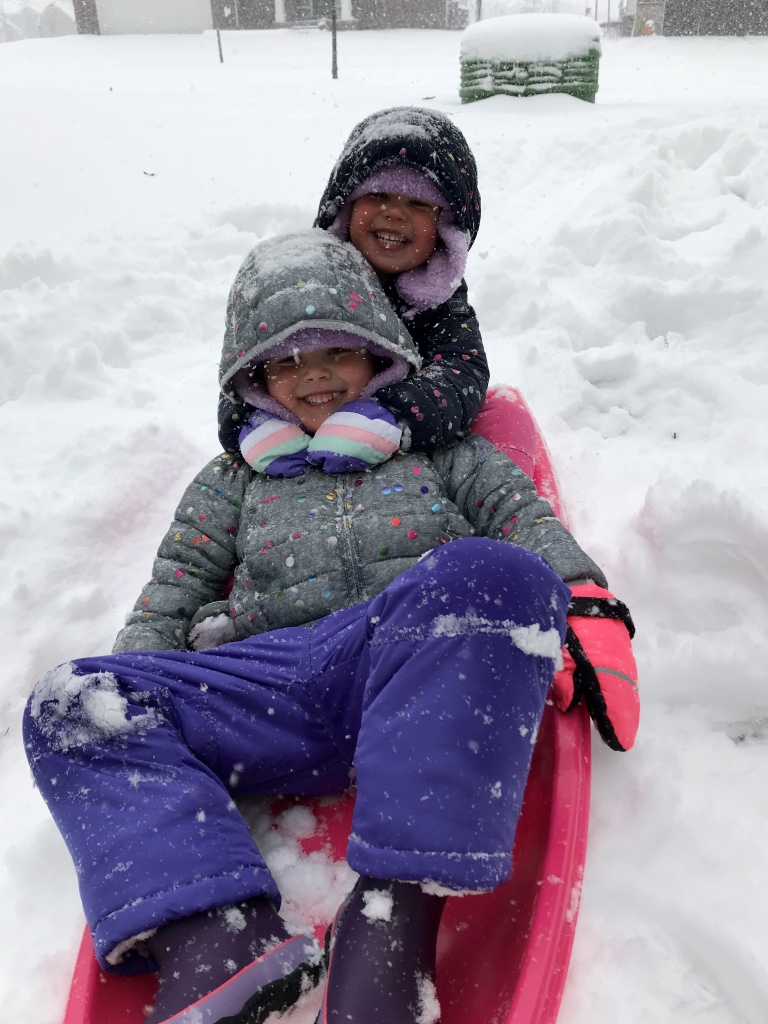 Once we finally made it inside, I put everything to dry by the fire because I had a feeling there would be a round two in the evening. 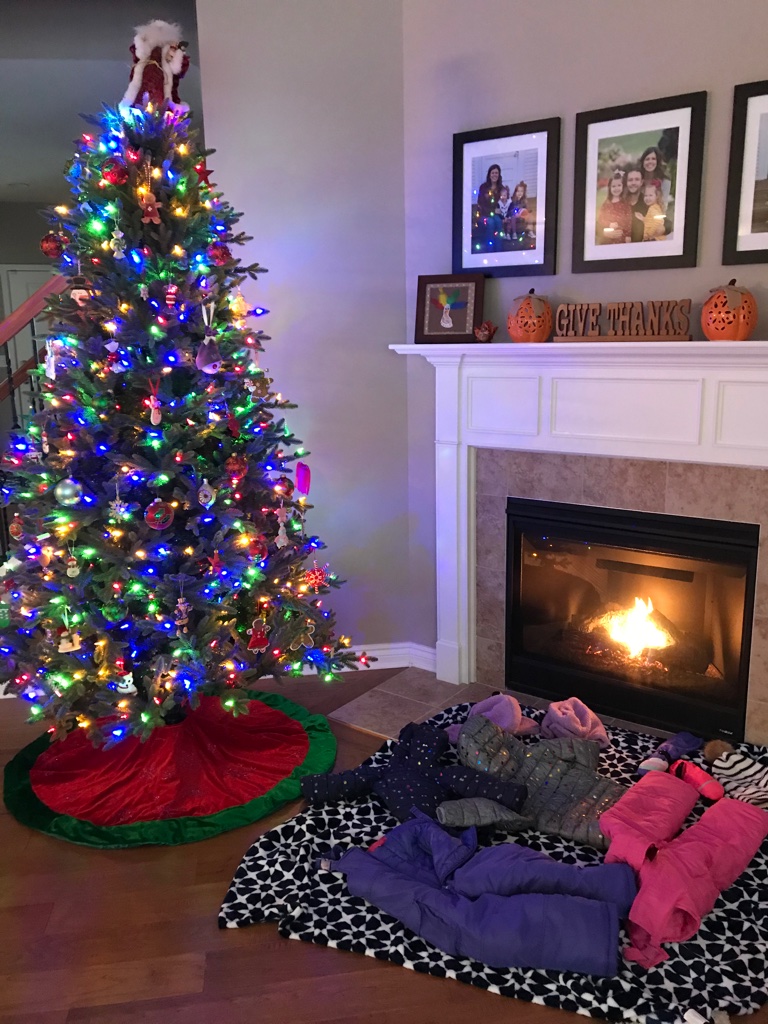 I was right!
Matty was out front blowing the snow, I was in the kitchen making dinner, and the girls were happy as clams locked on the deck! Lucy did countless snow somersaults . . . 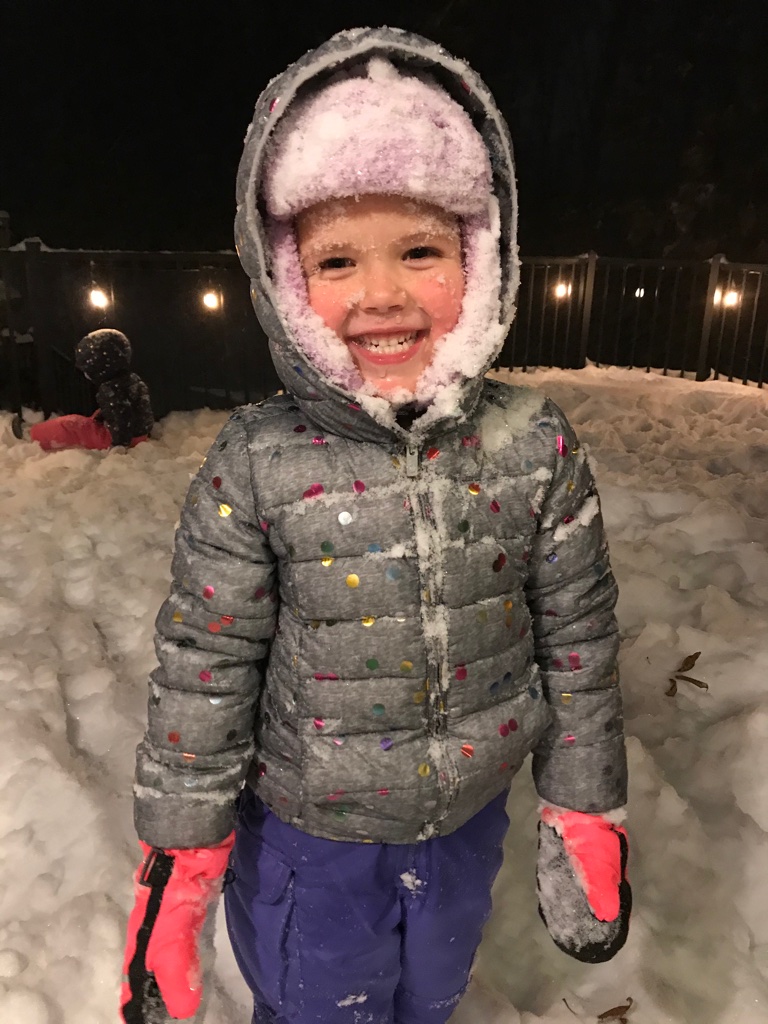 . . . and Emmy was happy to sit there for half an hour pushing snow over the edge! 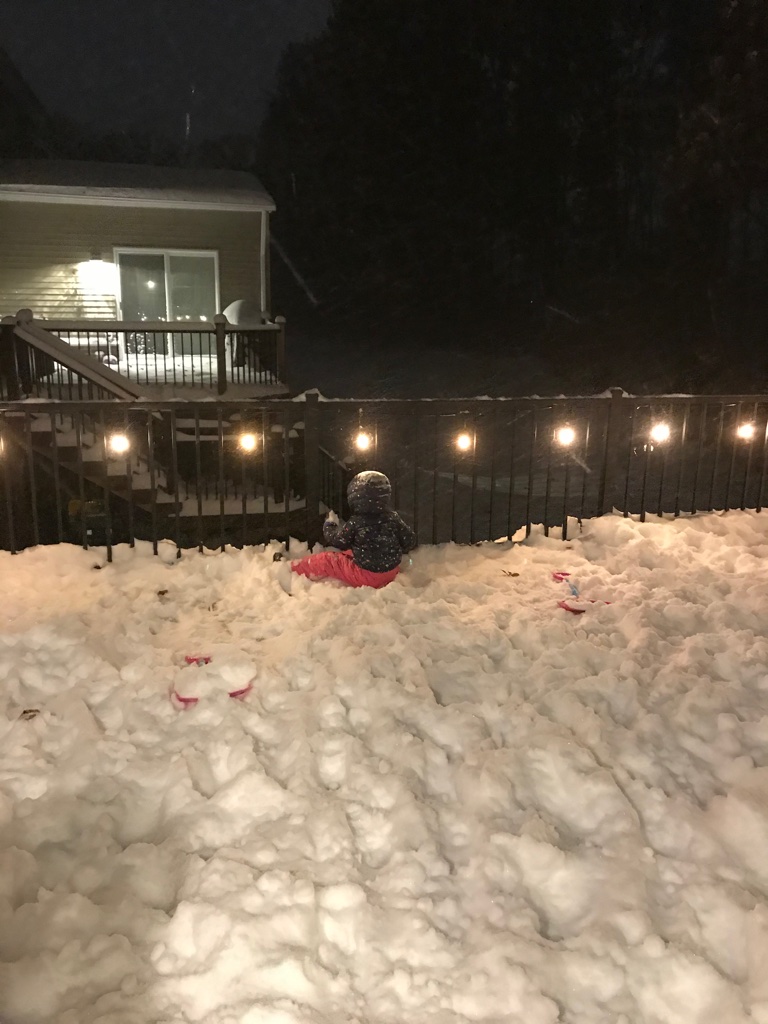 The Kissel girls are really into matching footie pajamas lately! 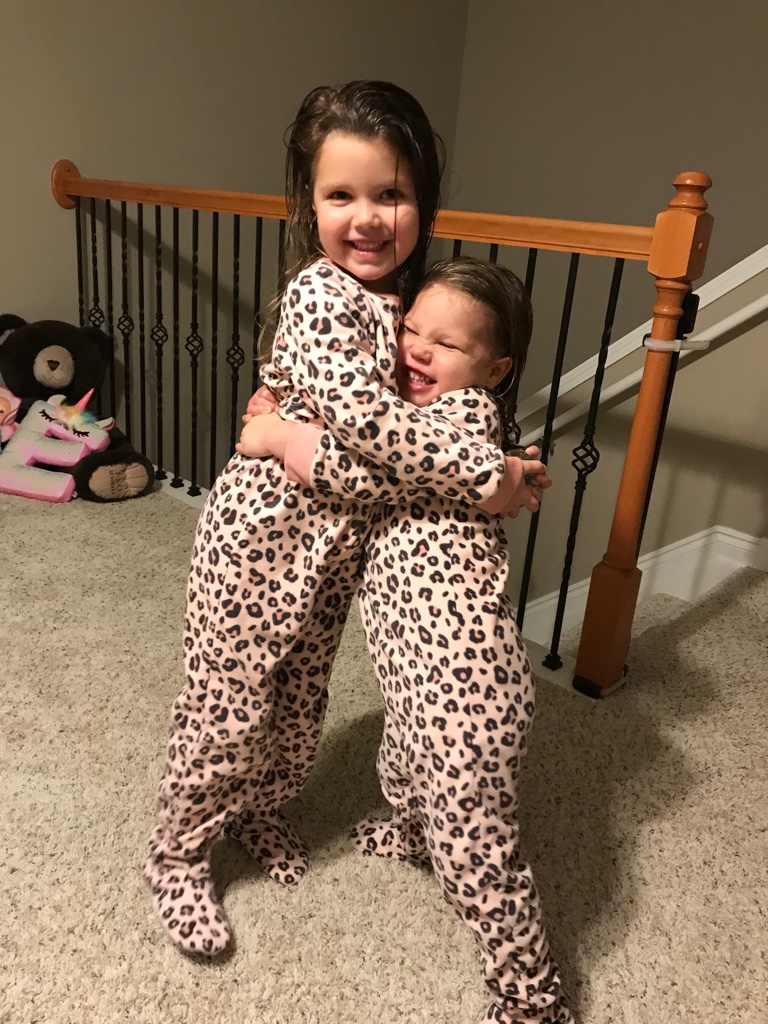 Tuesday was a snow day so we hunkered down and watched a movie first thing in the morning. 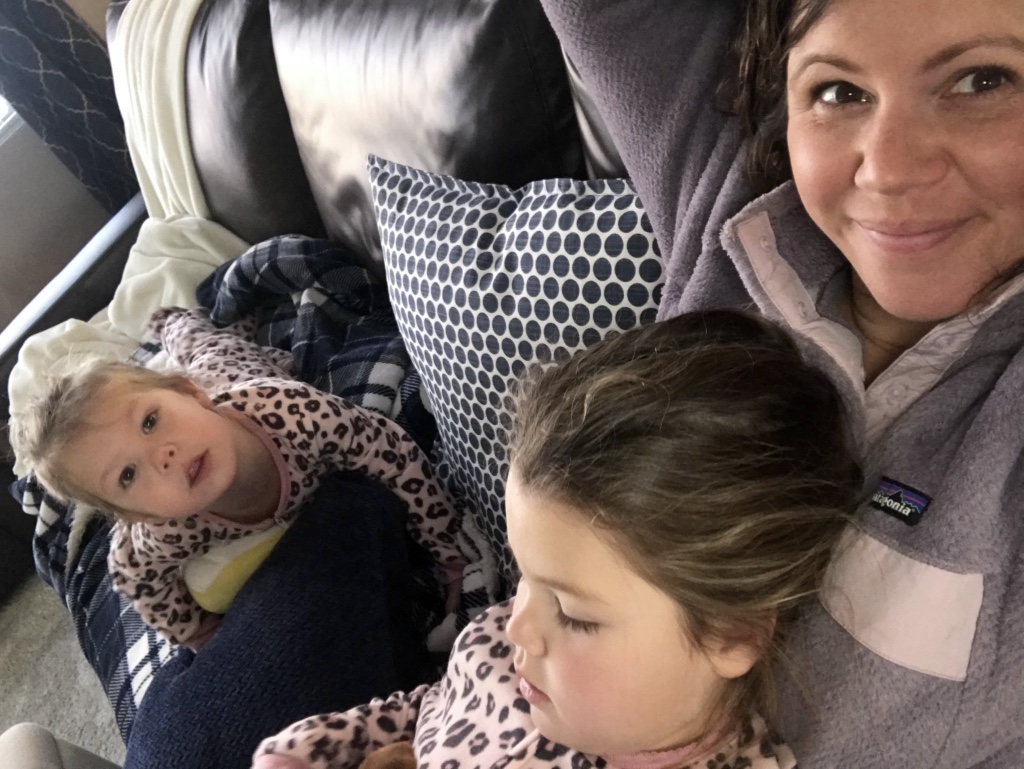 By 10:00 we were back outside playing. It was cold but sunny so we stayed out for a few hours. 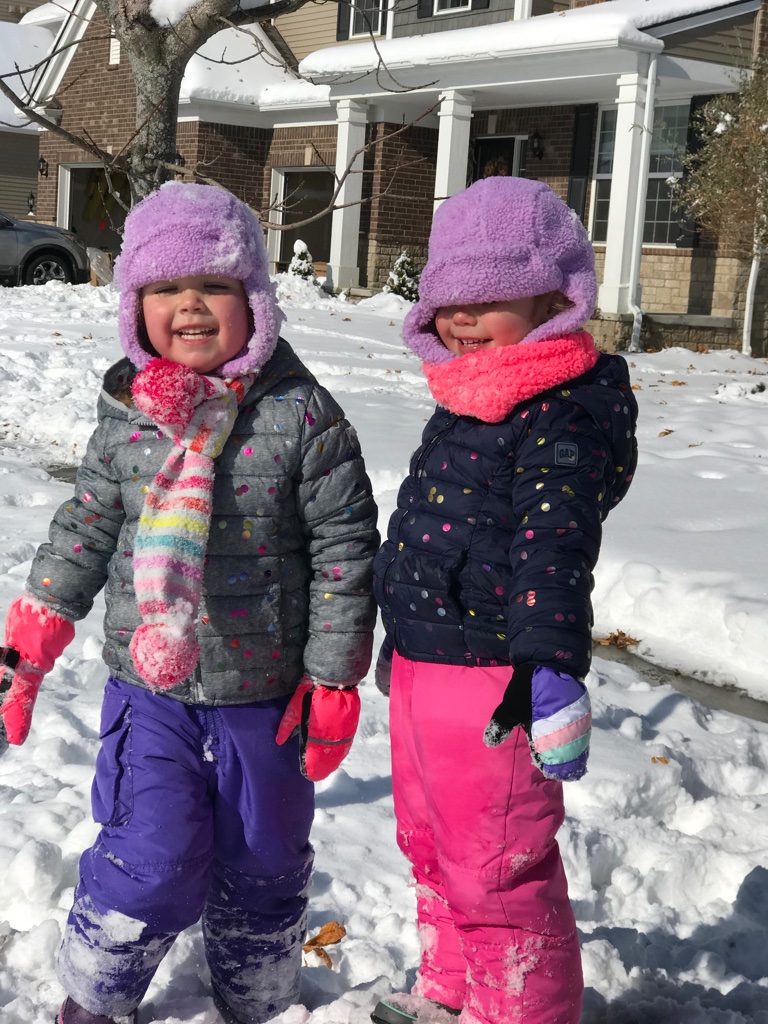 After lunch we made the trek out to Kohl’s to buy some more footie pajamas. (I did a little experiment and concluded that Emmy was sleeping through the night on the nights that she wore footie pajamas. When she wore regular pj’s, she’d wake up crying several times asking to be covered back up with her blanket. She only had one pair, so I definitely needed more for her!)
The girls couldn’t believe how big this sloth was! 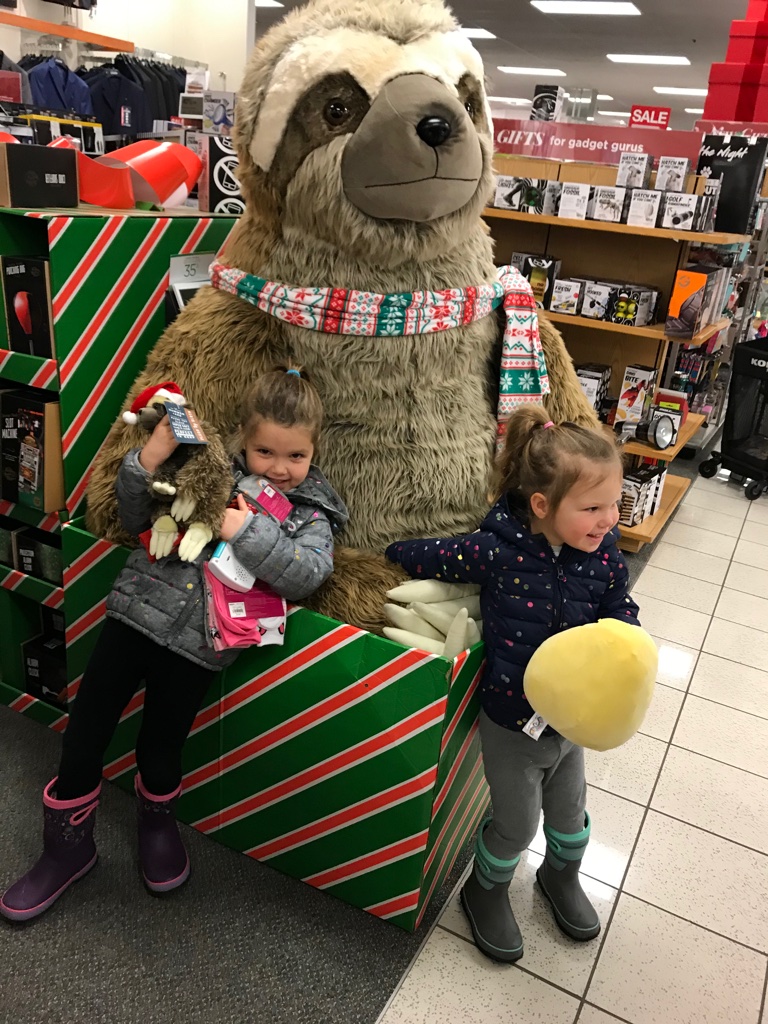 I mean, how am I supposed to just buy panda jammies for ONE girl?? 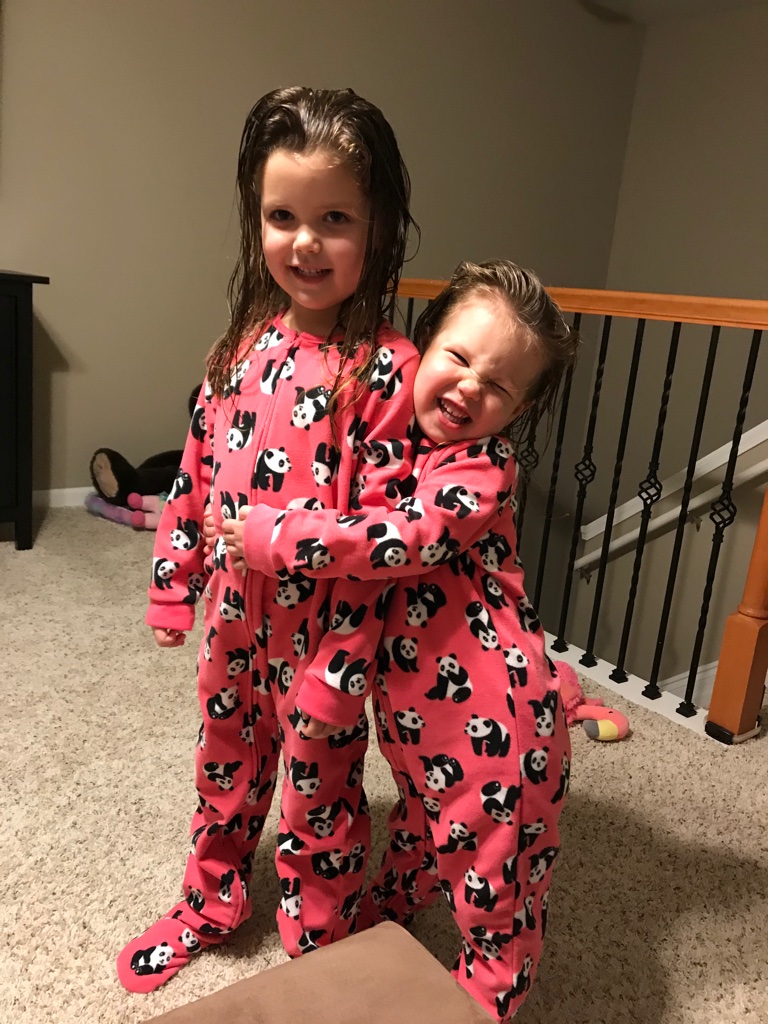 It was super duper cold yesterday so we didn’t make it outside to play in the snow, but there was some serious coloring going down in Em’s room. 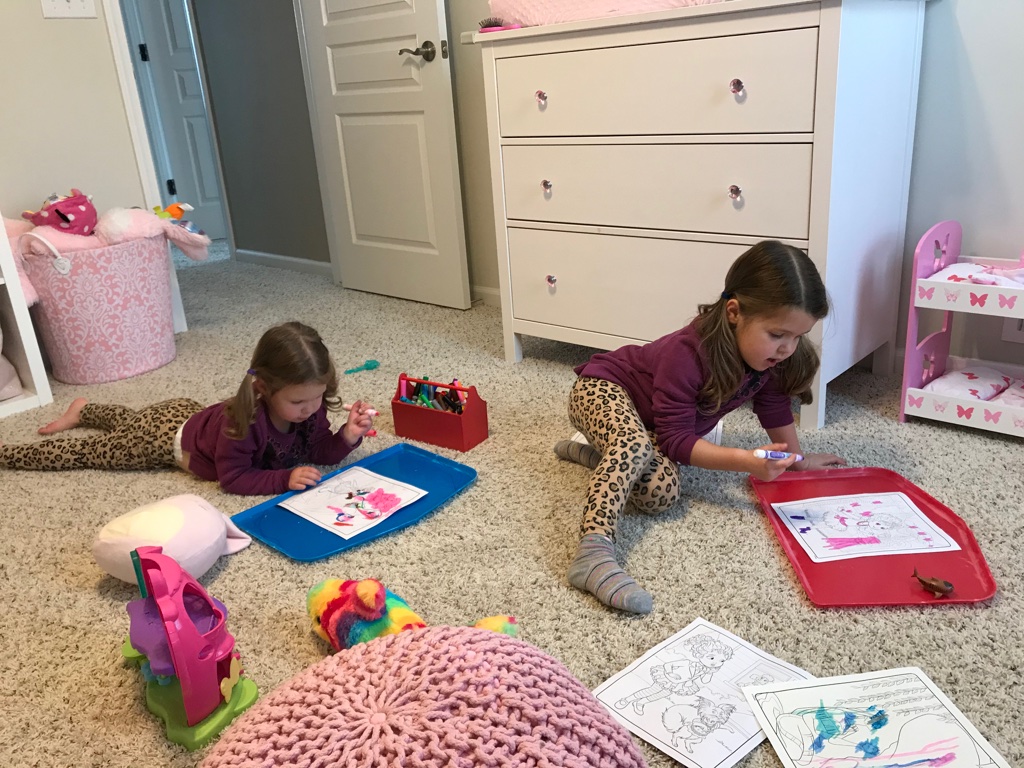 We have another low key weekend ahead of us, which I’m super excited about. However, with the conclusion of lawn/yard work season, I’m definitely ready to have Matty tackle some indoor projects!
Have a great weekend!
XOXO