Happy Monday!
We had the most amazing weather this weekend! We packed a lot of fun activities into three days (four, if we count Thursday!). It should have been a super fun weekend, and it was for the most part, but there were a few epic tantrums sprinkled in for good measure that threw us for a loop!
My mom and I took the girls bowling on Thursday. This was only their second time going, and they love it! 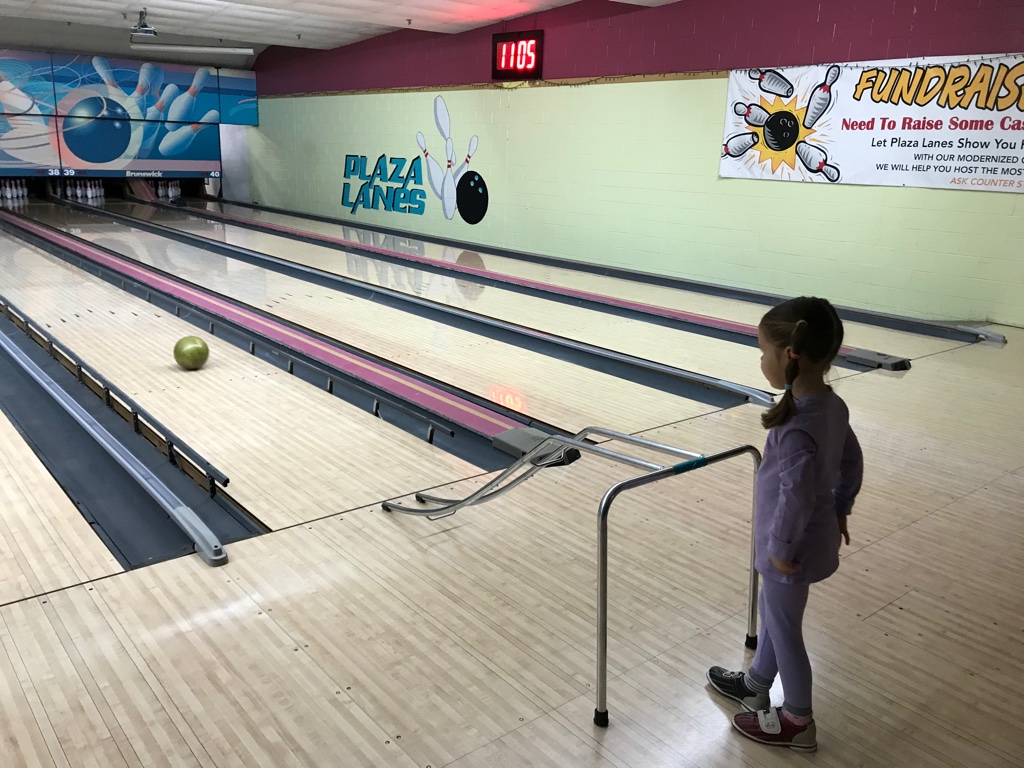 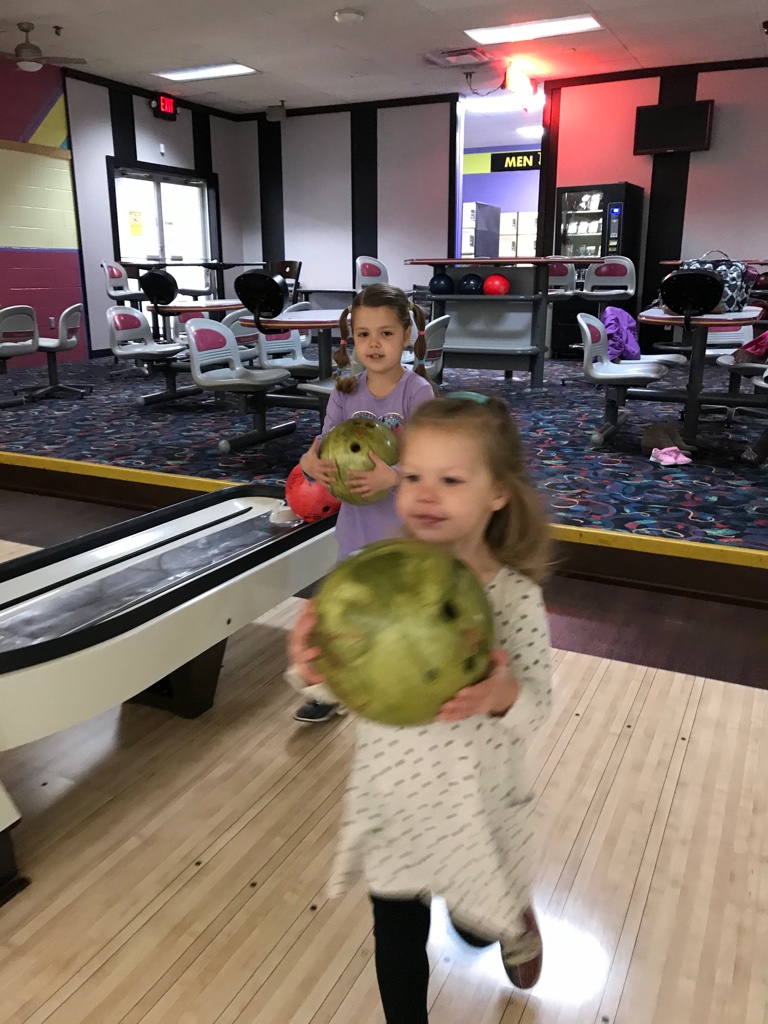 Emily was fascinated by the ball return. 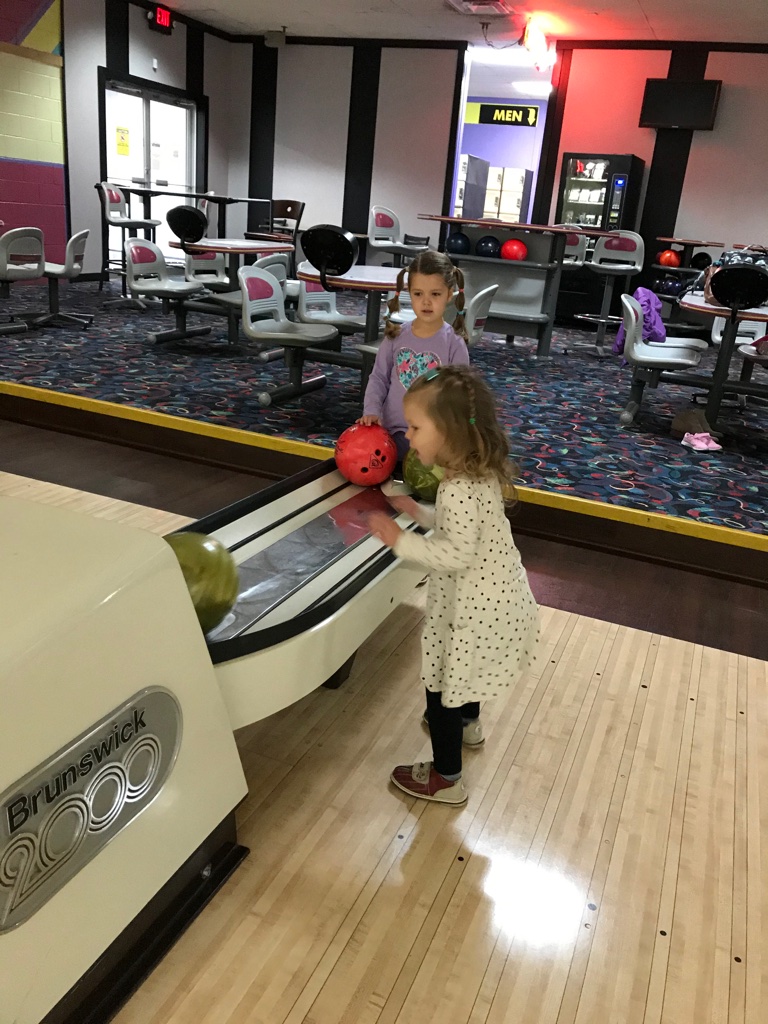 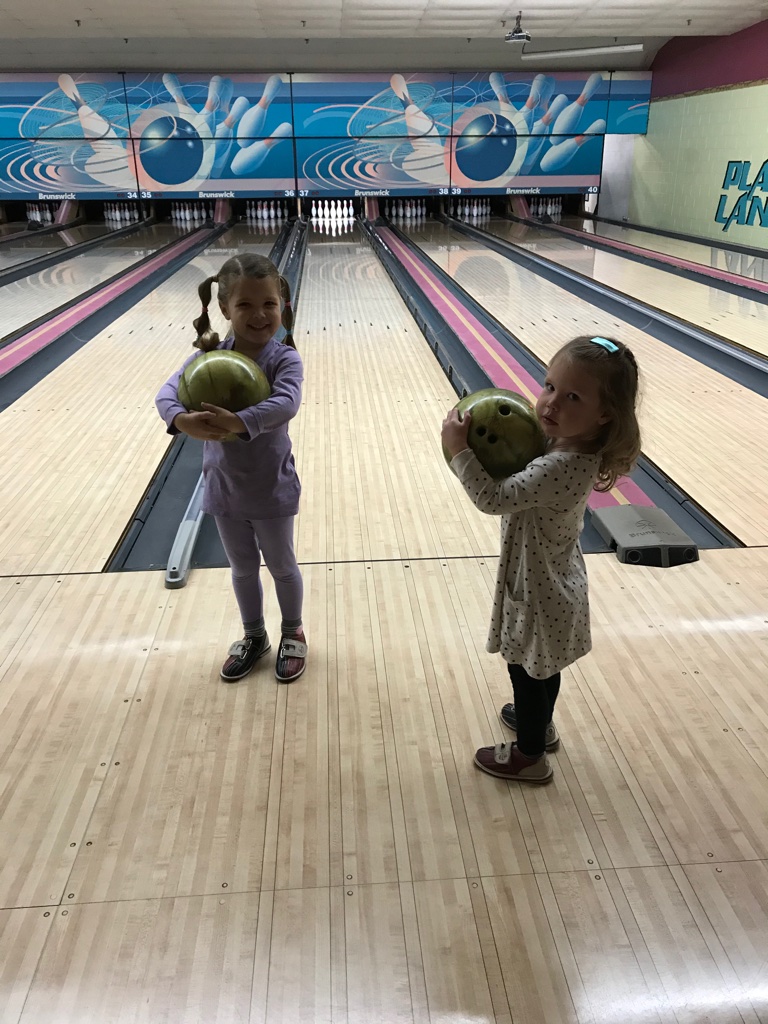 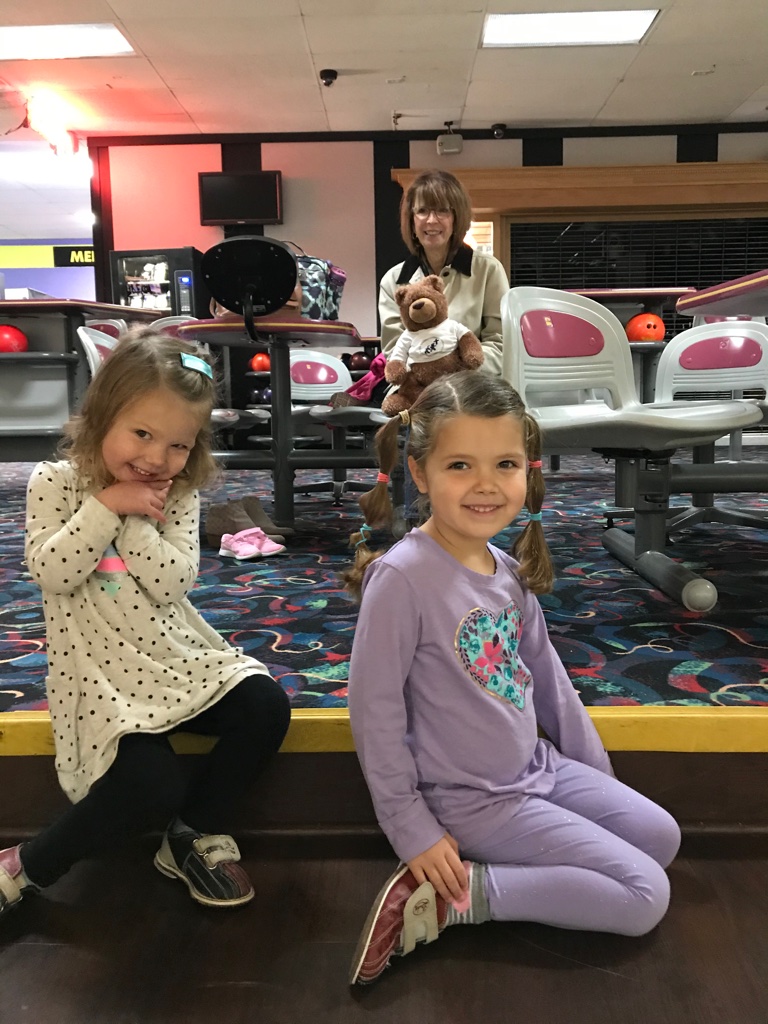 After bowling we went out to lunch and then Oma bought everyone cupcakes as an early Sweetest Day treat!
The box from my monthly delivery of paper towels from Target always provides an afternoon of entertainment for the girls. 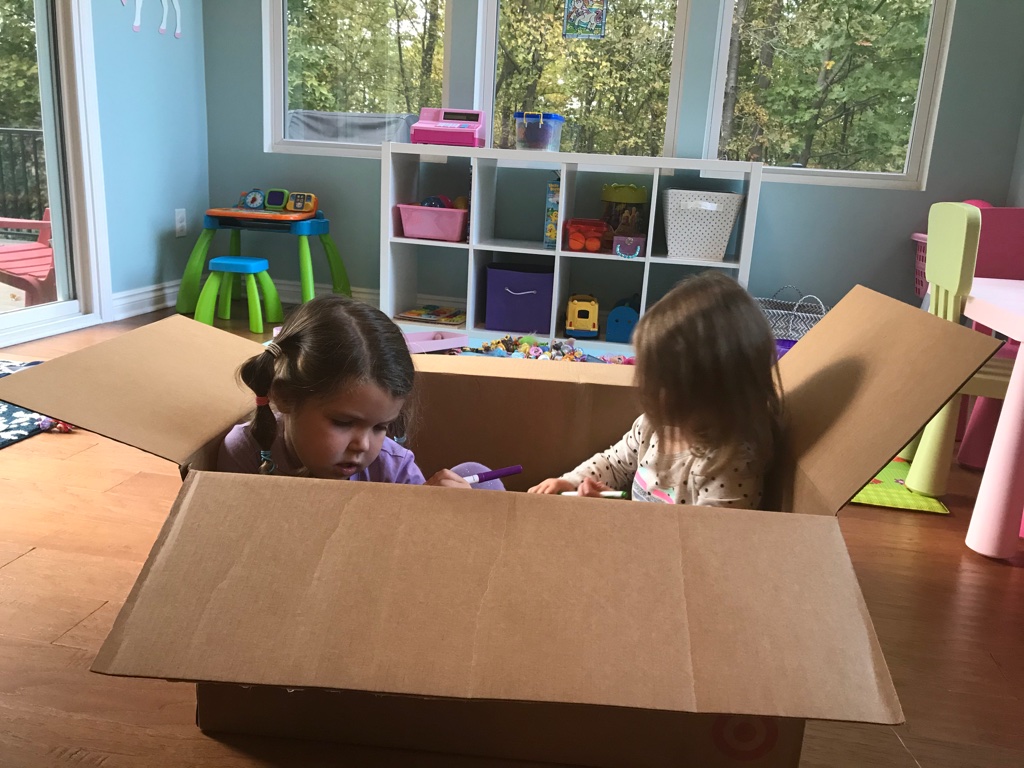 I wish everyone could see on a weekly basis how much Emmy Roses LOVES school. It continues to amaze me because it is the total opposite of what I’ve experienced with Lucy. Emmy’s classroom is at the end of a long hallway, and on Friday she saw her teacher waiting for her and sprinted down to give her a big hug. I love it! 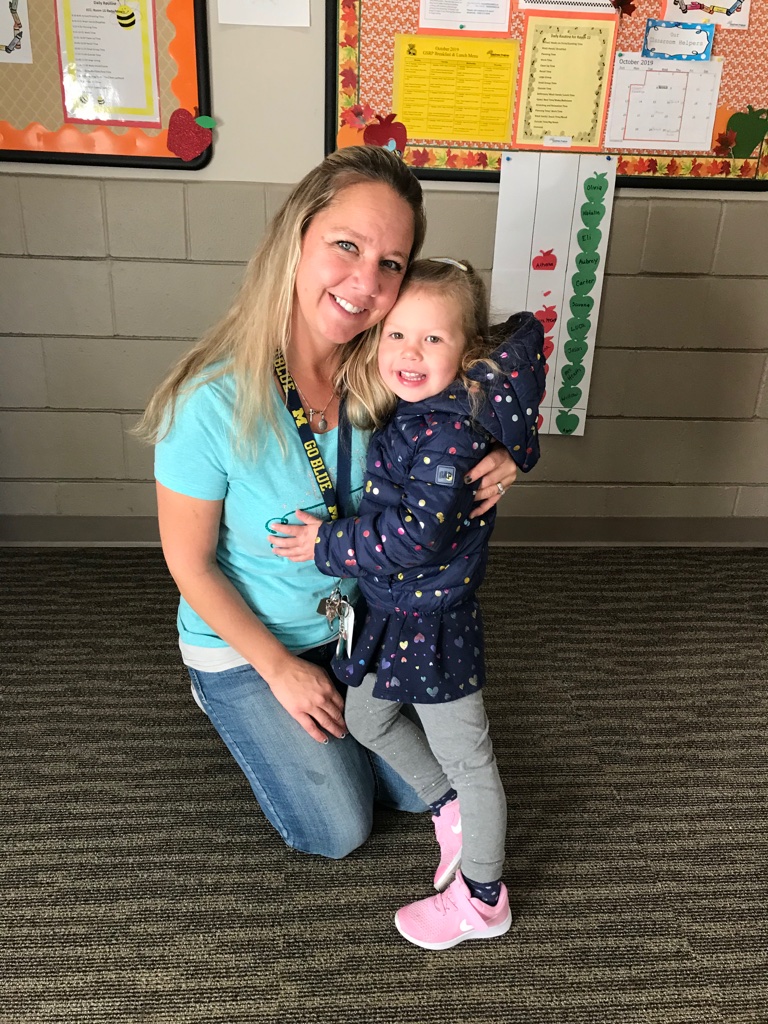 Matty came home early on Friday afternoon (Hallelujah!) so we decided to take the girls to Erwin’s to play and get some cider and donuts. They love jumping all over the straw bales. 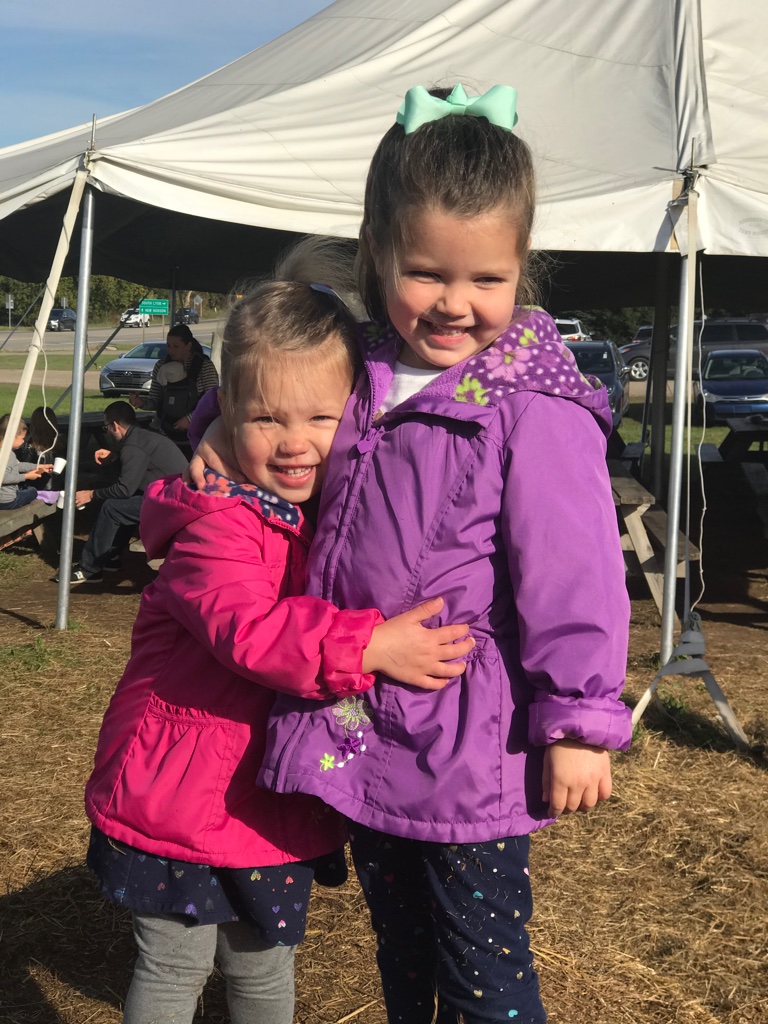 They also love the donuts and apple cider! 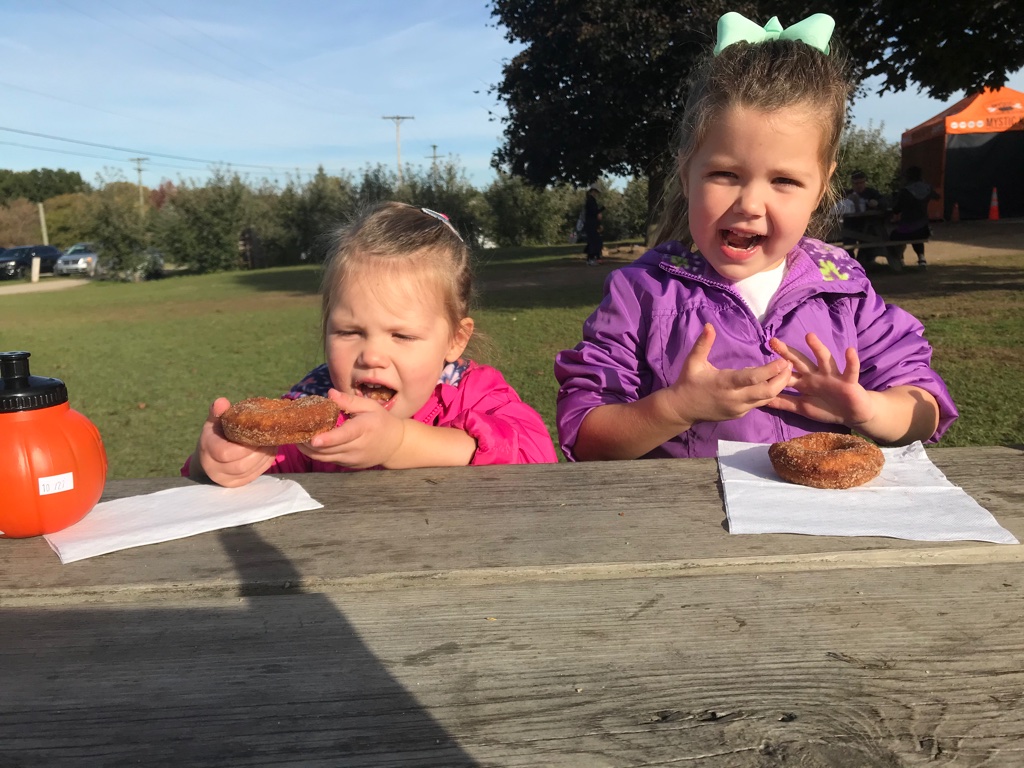 We took a tractor ride to the pumpkin patch. 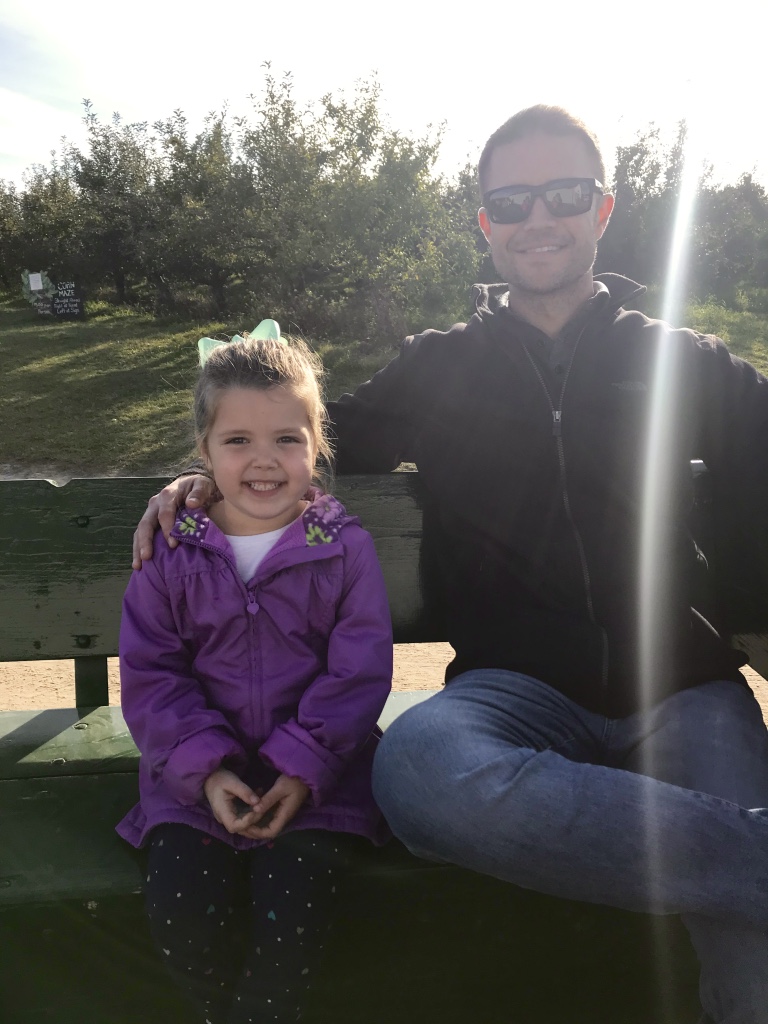 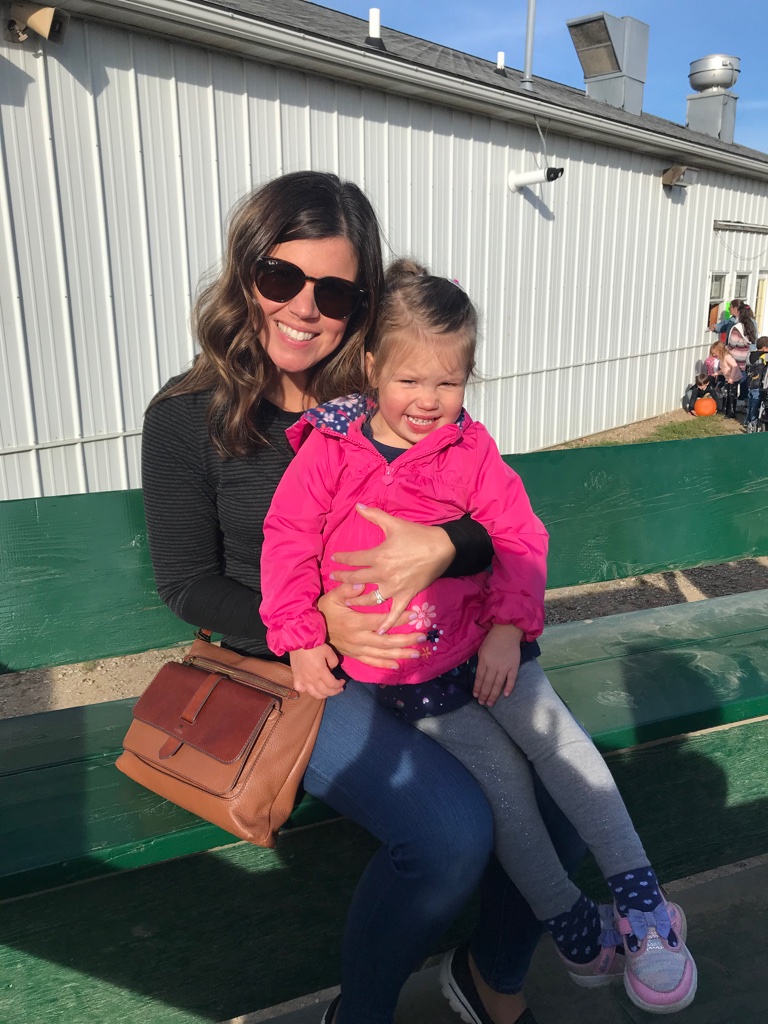 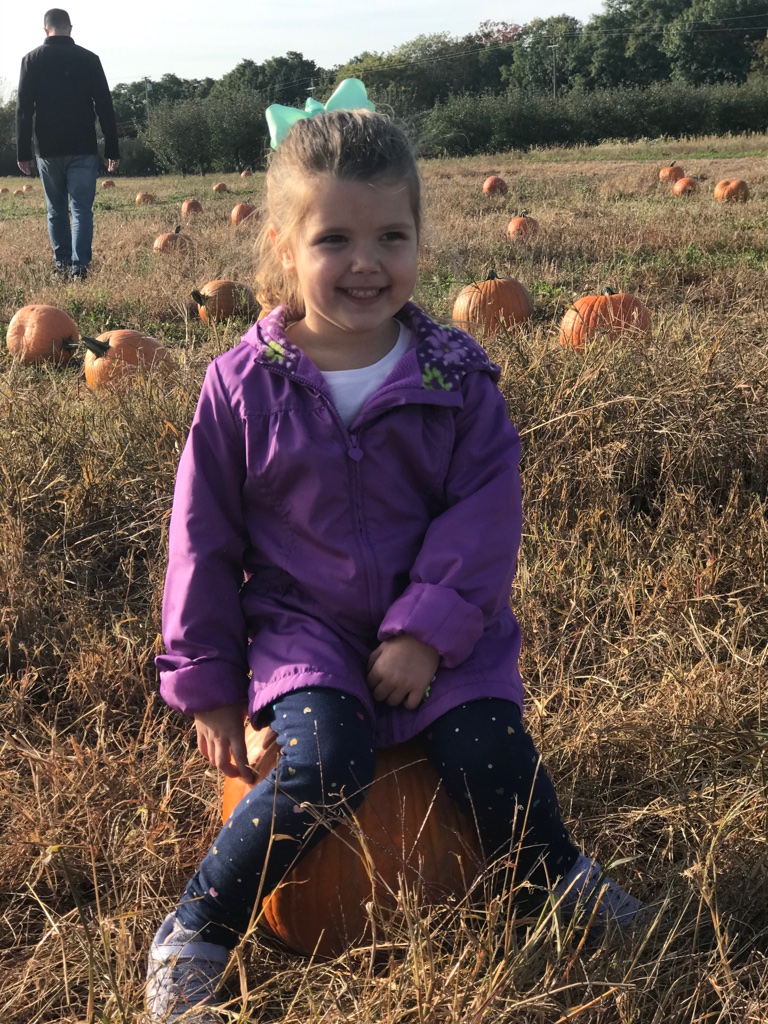 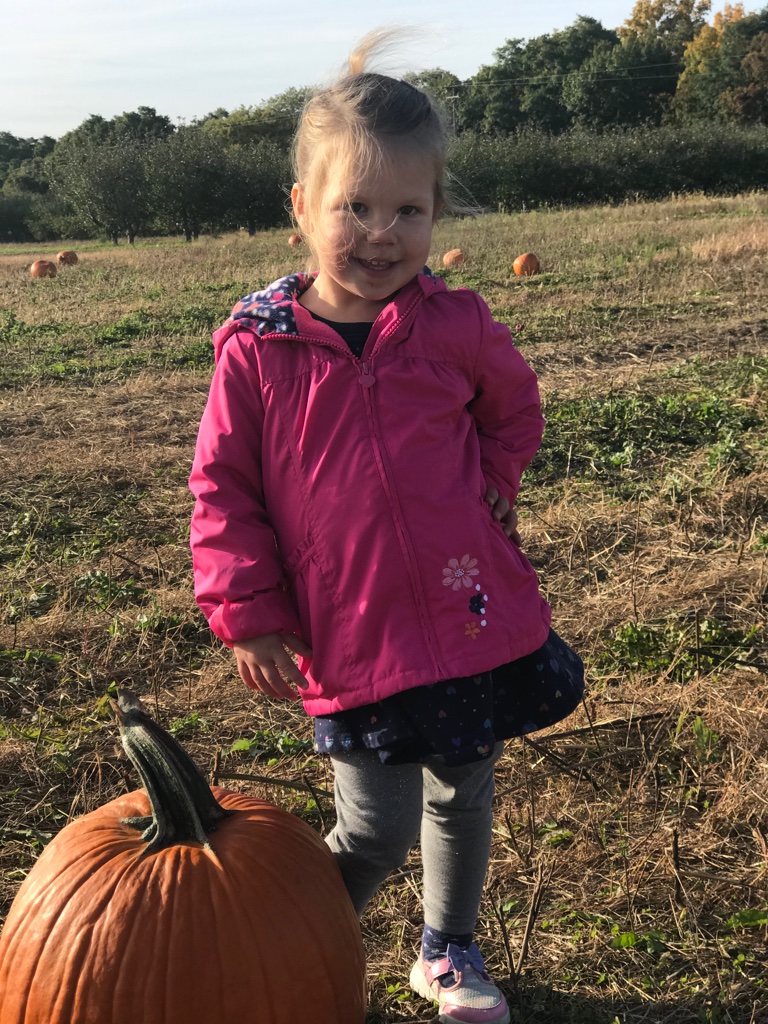 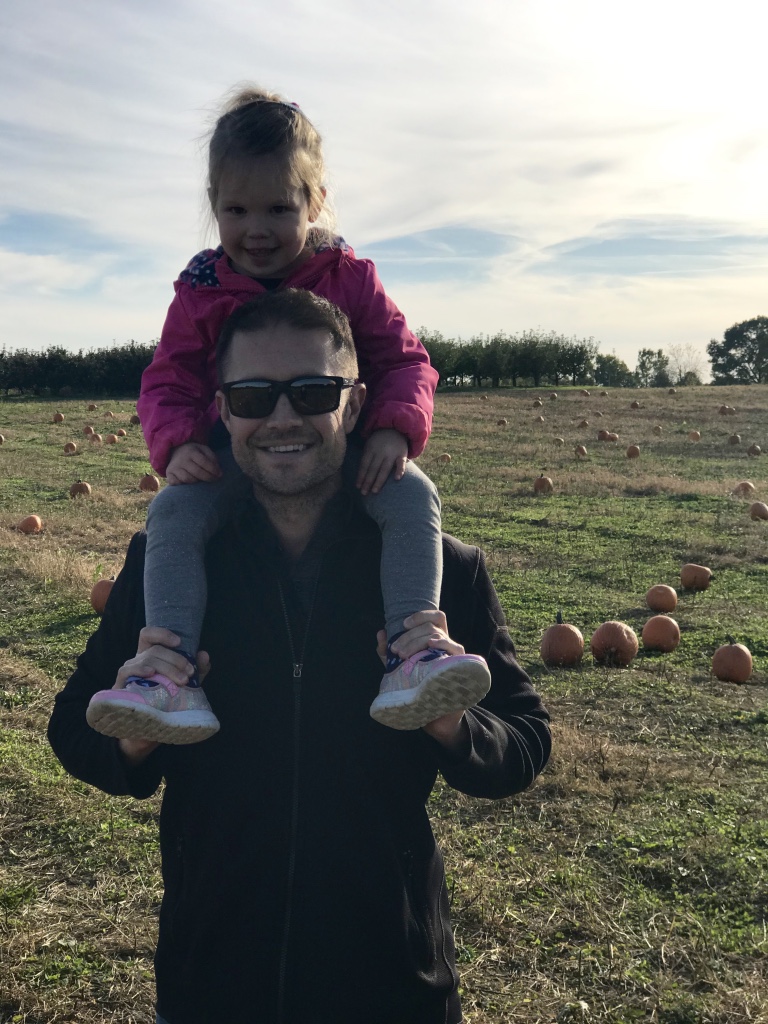 And then fed the goats and visited with Buzz and Woody before heading home. 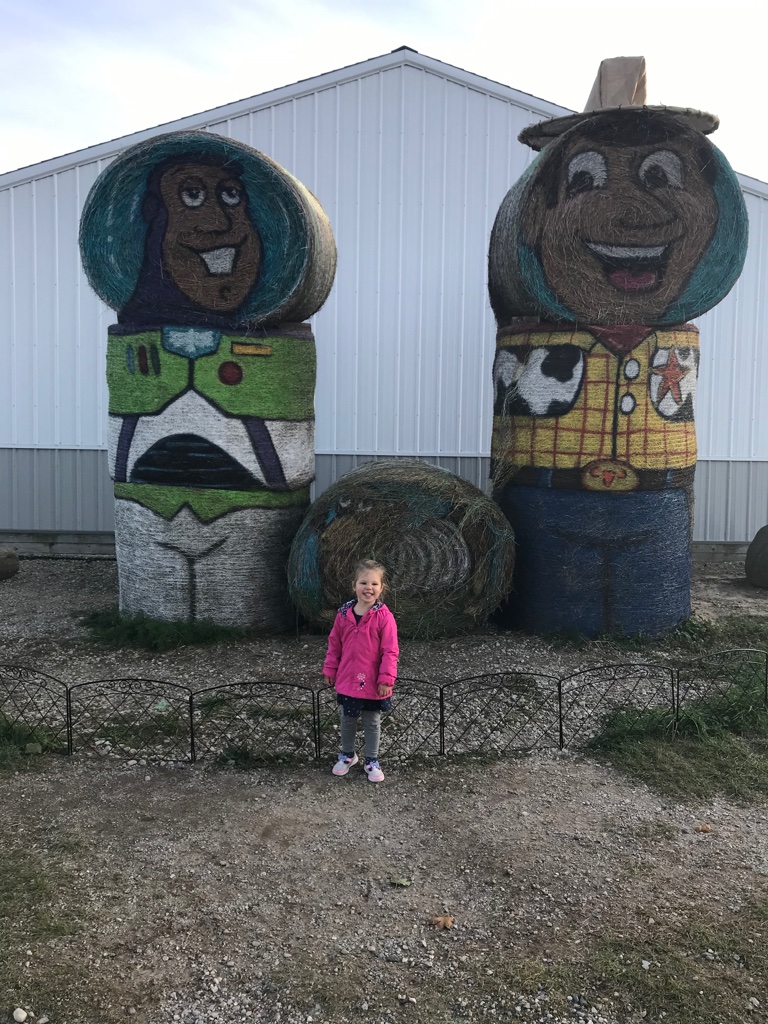 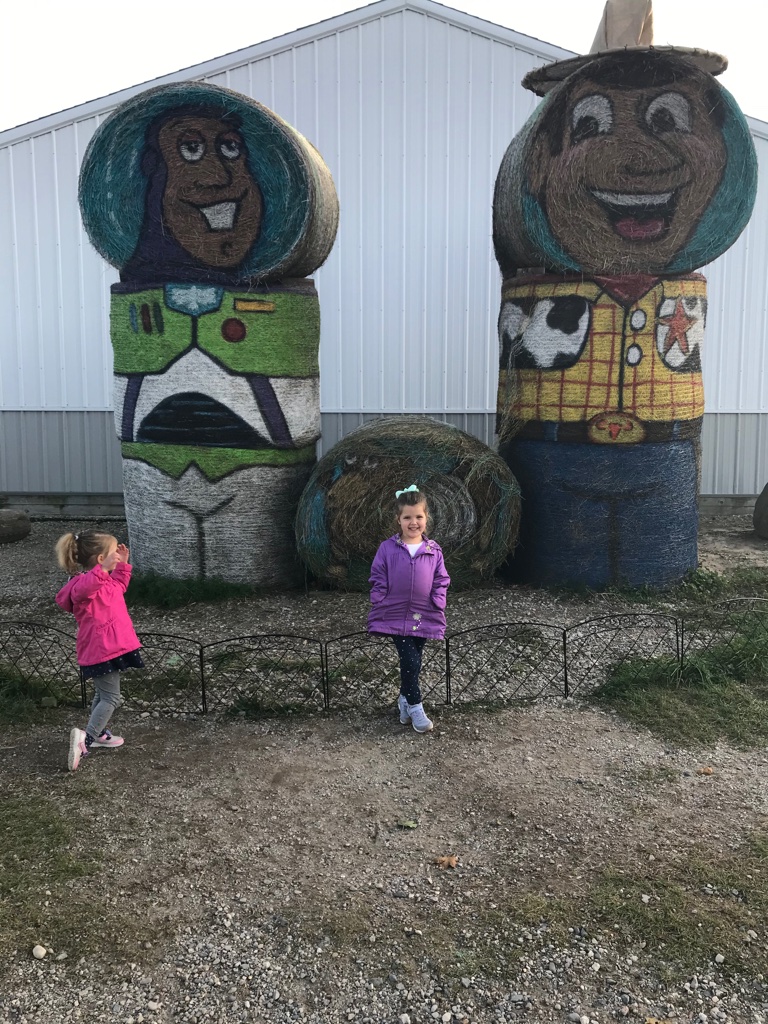 We were headed to Costco on Saturday morning, and I told Lucy she could wear whatever she wanted. She usually goes with a monochromatic look, so I was pleasantly surprised when she put this adorable ensemble together. 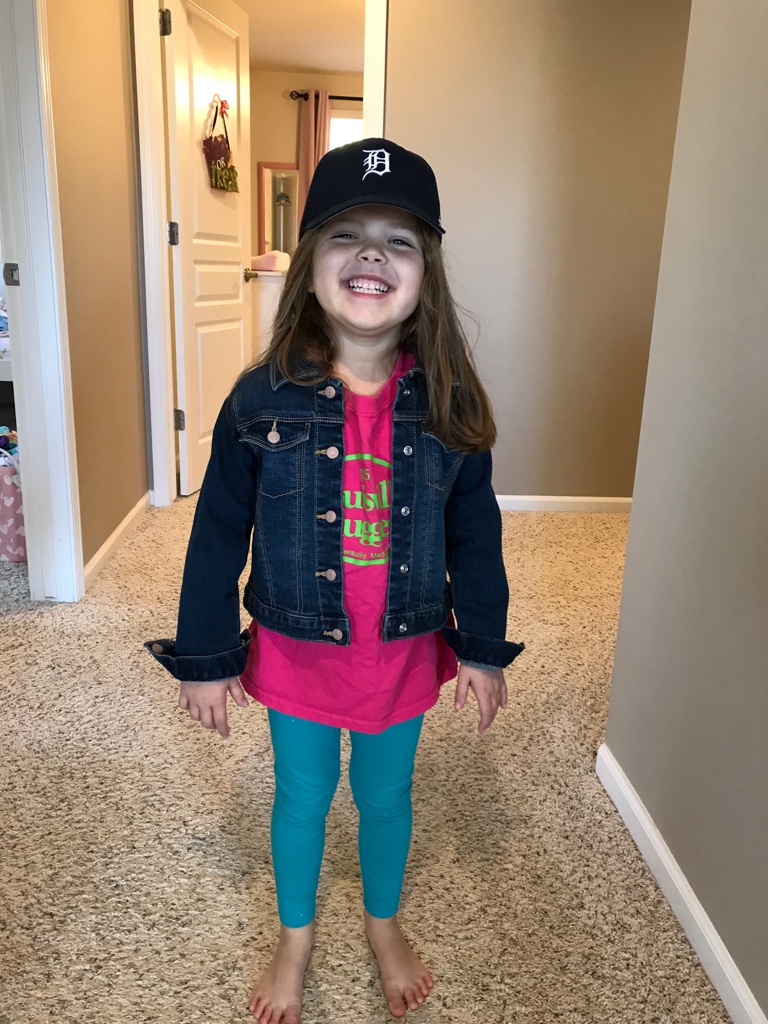 The girls love our neighbors’ dogs and were happy to help walk them on Saturday. 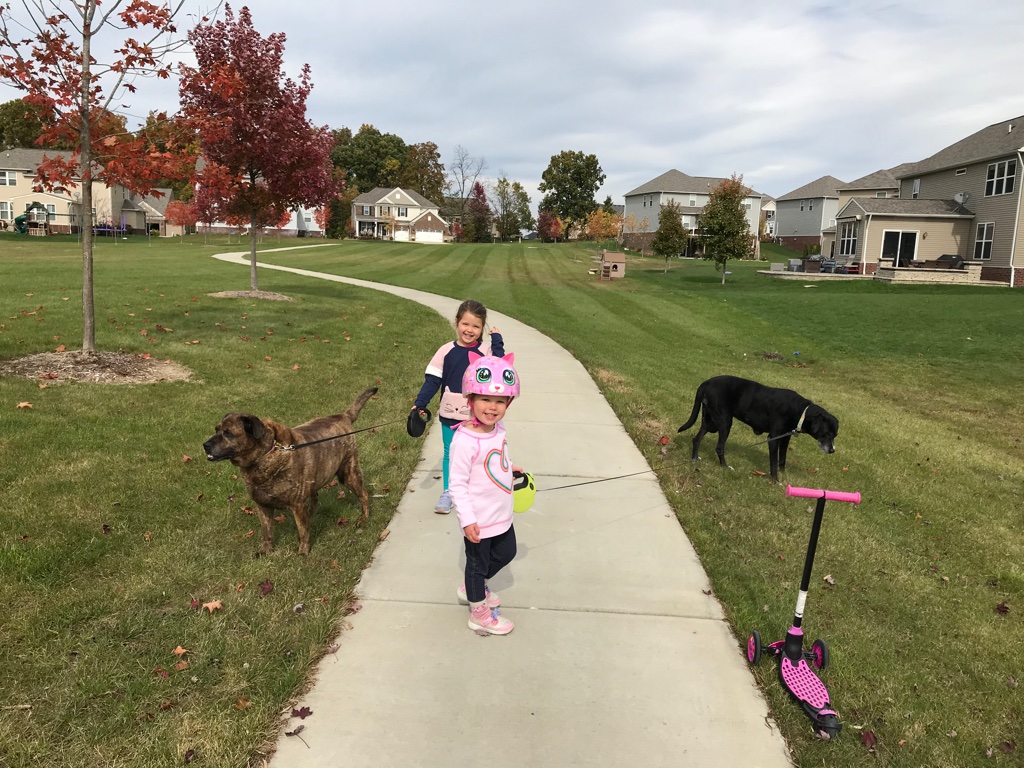 Our neighbors were out of town over the weekend, but said the girls could use their playground if we wanted. Lucy and Emmy played for awhile while Matty cut the grass. He came over to check on us and found me living the life on their patio while the girls played. I chose not to include the video he took of me carrying a kicking and screaming Lucy back across the street after I gave her SO MANY warnings that it was time to go home. 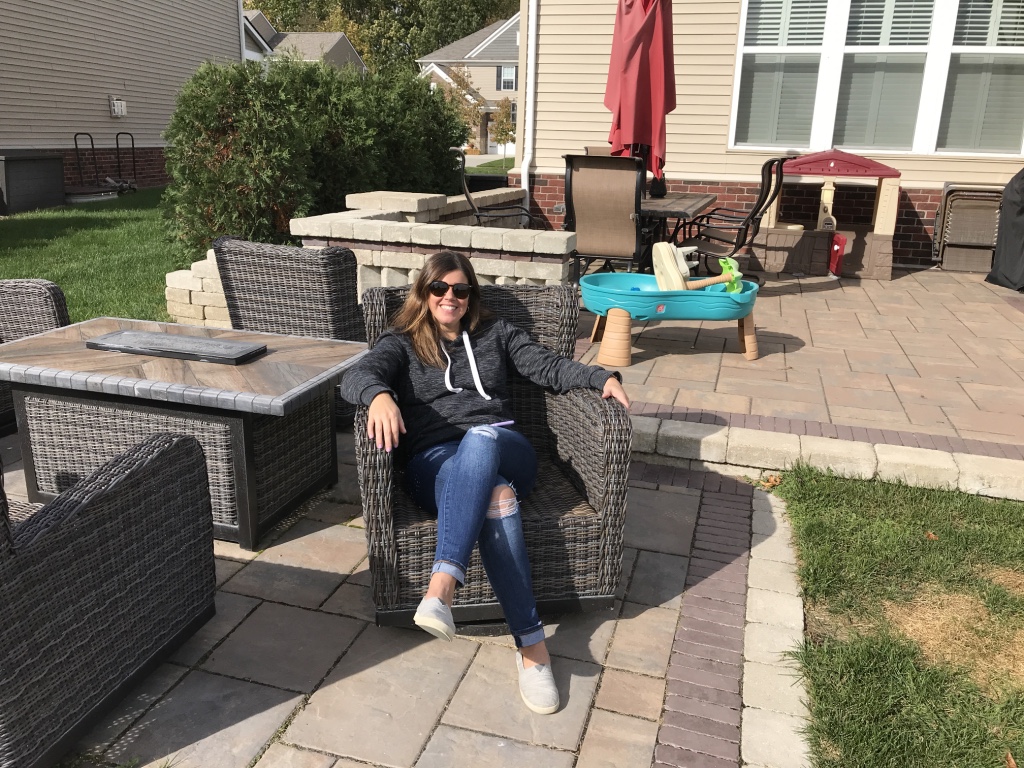 We played outside for hours on Saturday afternoon and then decided to take the girls out for dinner and dessert for Sweetest Day. You know, because they’re both so sweet all the time. 😉
We sat next to this festive fireplace that we told Lucy she couldn’t play in . . . and then two other little kids walked over and started playing in it. C’mon, people! 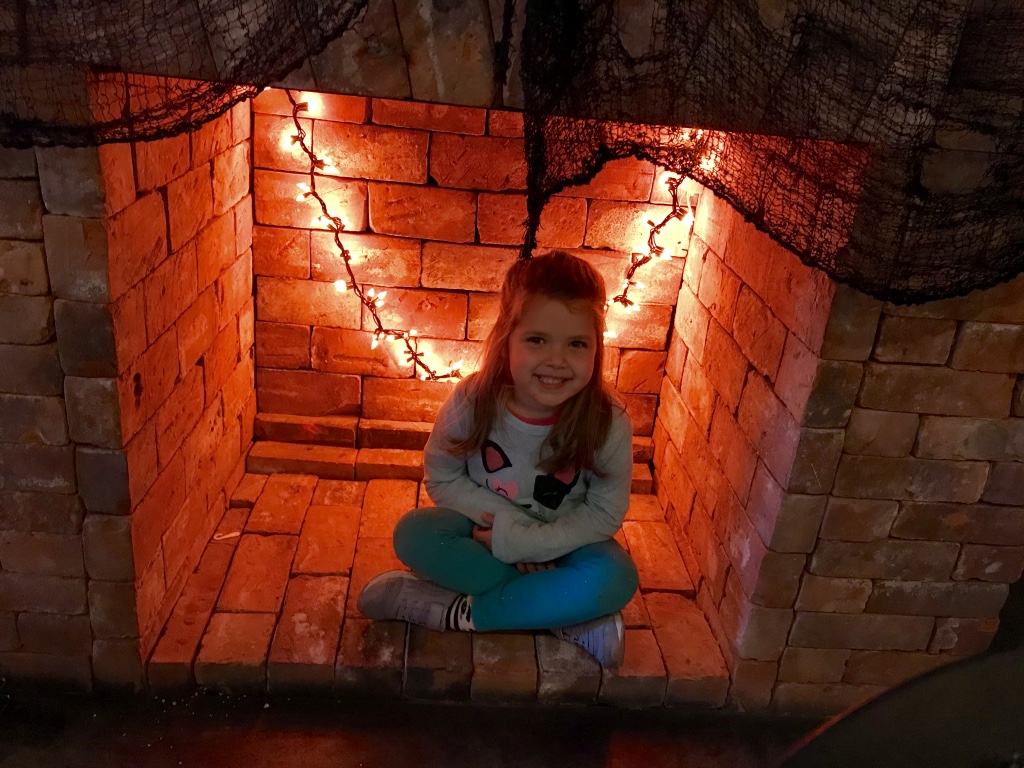 We planned a family fun day at Kensington Metro Park that started off with an epic tantrum by Lucy over what shoes she was going to wear. We’re trying to teach her that she can disagree with us, but respectfully. Shouting, “No!” and then declaring she’s not going to do something is not cool with us. All I wanted the girl to do was go upstairs and get socks to put on with her rain boots. ugh! 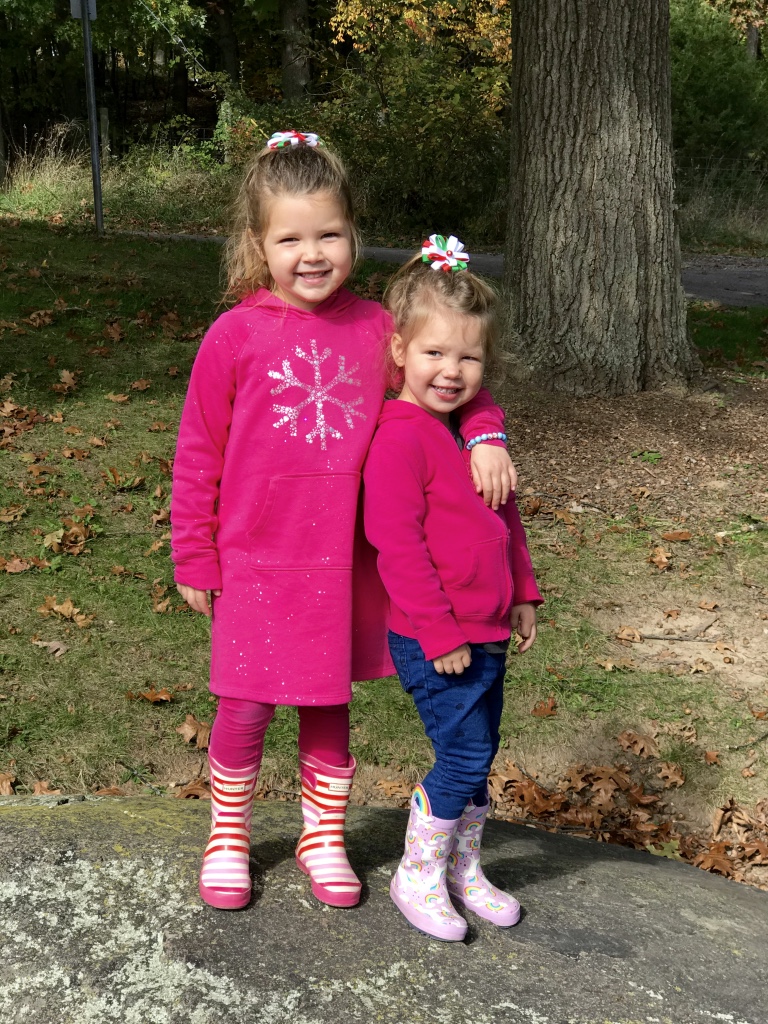 We eventually made it to the farm, and the girls loved petting the animals. 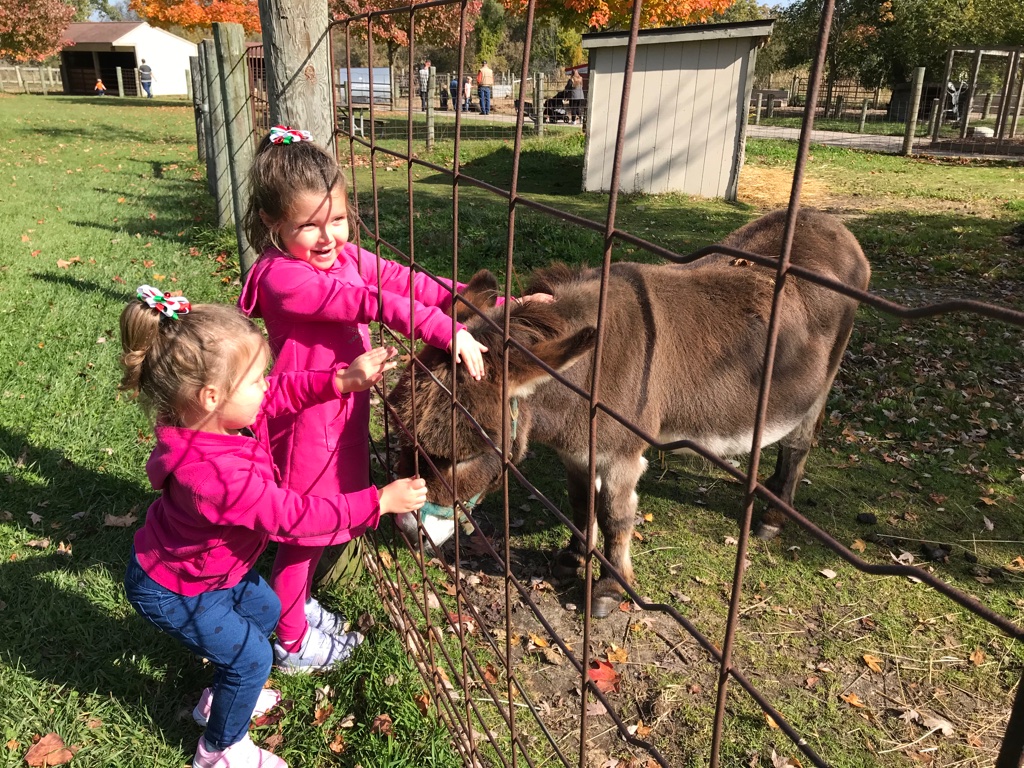 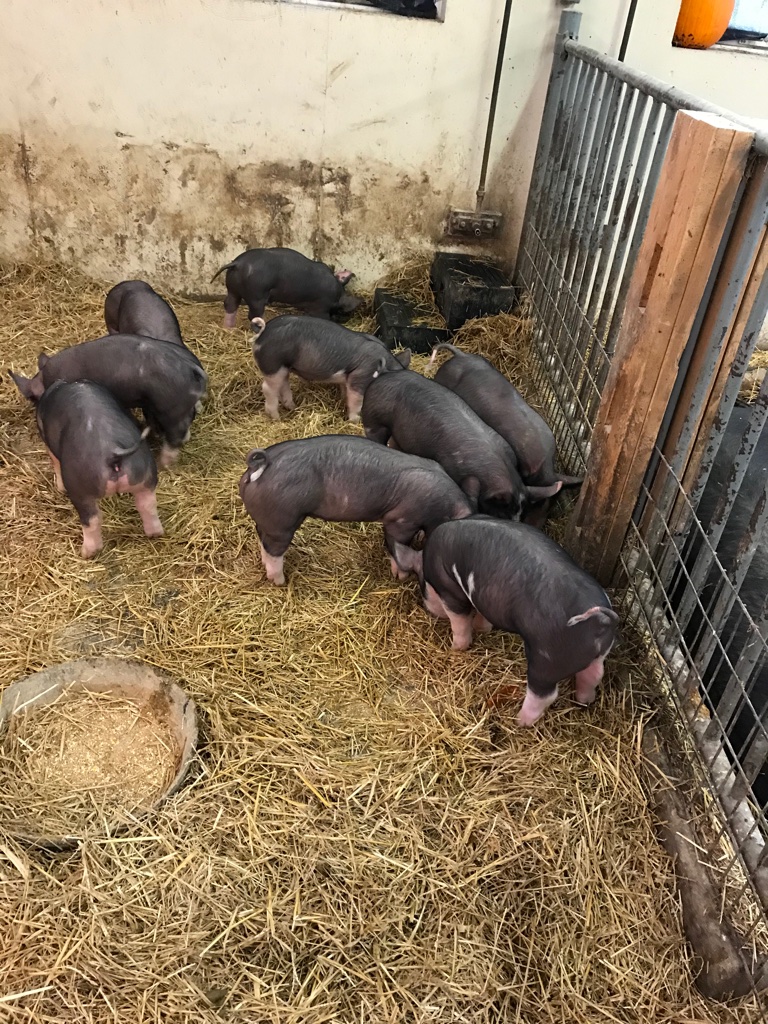 After the farm, we headed to the playground by the lake. Not a bad view on a beautiful fall day! 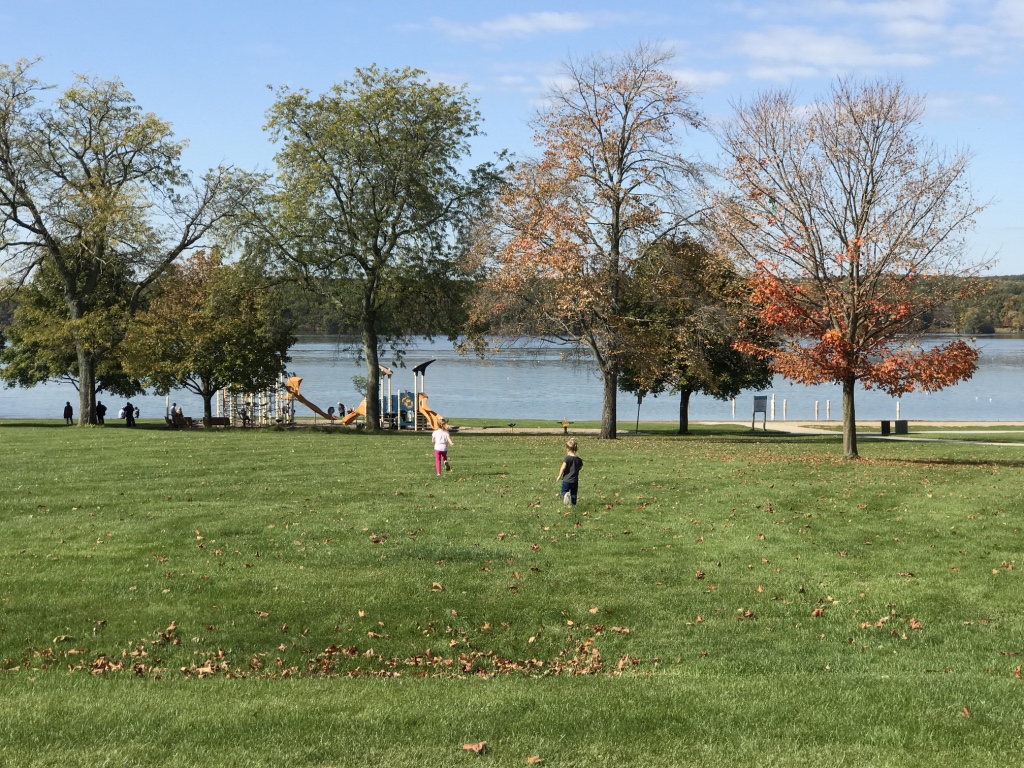 Not a bad way to spend a Sunday! 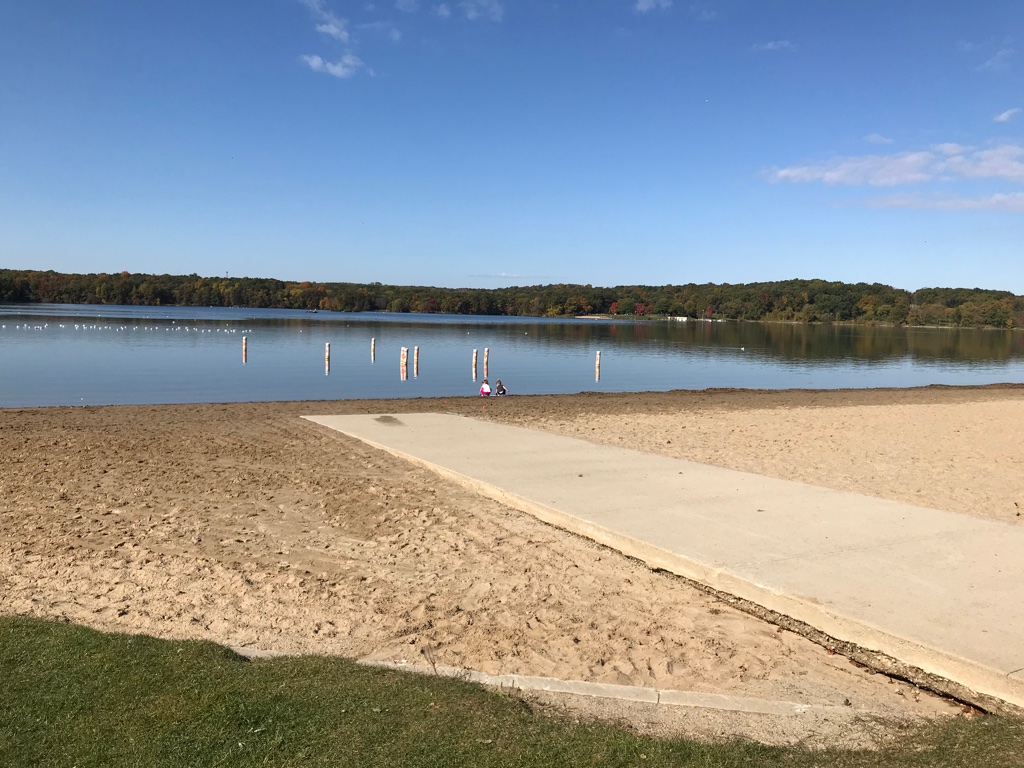 Emily had been up since 6:15 am and was as fussy as can be. When we got back from Kensington she was melting down left and right, so I decided she needed a little snooze (she doesn’t nap anymore). She let out an epic, ear splitting scream when I told her she had to rock with me in her chair and then passed out two minutes later. 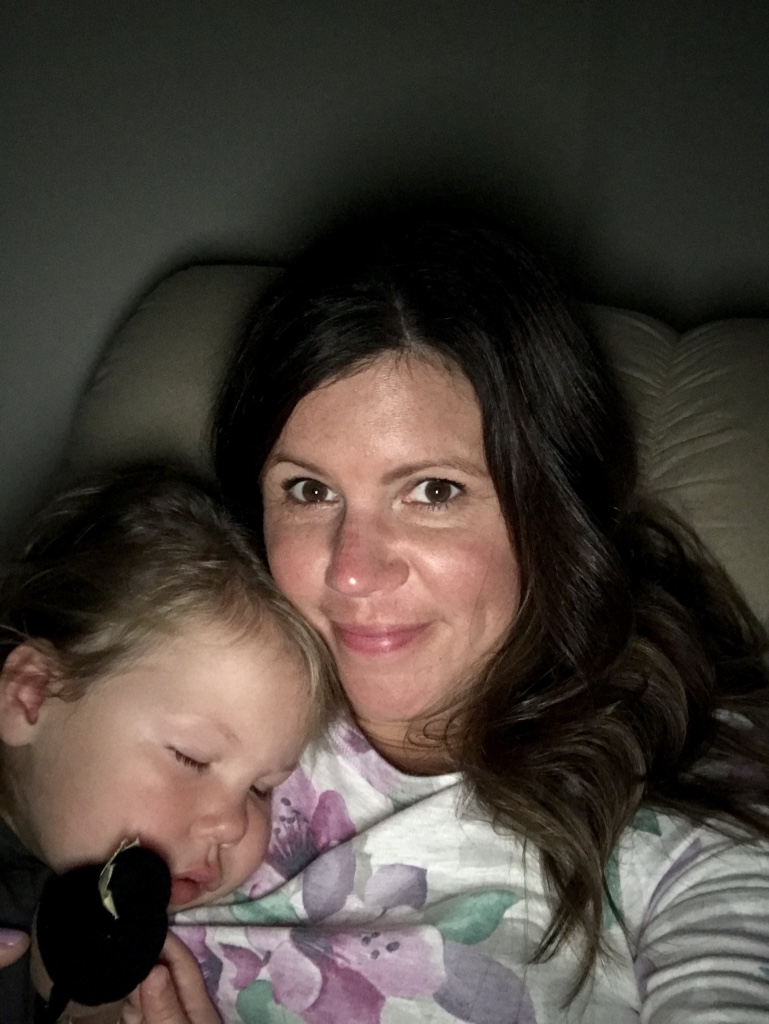 The rest of the day was spent meal prepping, playing outside, and exerting our parental dominance by having to hand out a big consequence during our evening stroll. That’s right, Lucy wasn’t listening again and flat out told us no a few times when we explained to her why she needed to change her behavior, so we calmly counted to three and she called our bluff. . . and then went to bed without getting to watch a T.O.T.S. with her sister.
Phew!
Lucy has been so darn sweet for about eight weeks, but a switch has been flipped. I’m going to try my best to be patient and understanding. I did yell at her once this weekend. It didn’t seem to phase her, but it left me feeling like crap so I’m going to try and stay calm and avoid that tactic from now on.
I would say that, overall, the weekend was a good one. The weather was perfection! I’m looking forward to some Halloween activities with the girls this week, and a night out with a friend on Tuesday! Yes!!
XOXO