Happy Thursday!
School officially started for Lucy this week . . . just in time for the return of the summer weather! Honestly, by this time in the year if I can’t be in a pool or a lake then I have no use for extreme heat and humidity. Bring back the low humidity upper 60 degree days for me, please! 😉
Lucy had her orientation at preschool on Monday. The kiddos got to choose a set of stickers for their cubby and name tag, and Lucy’s teacher had a set of Nemo stickers ready and waiting for her! 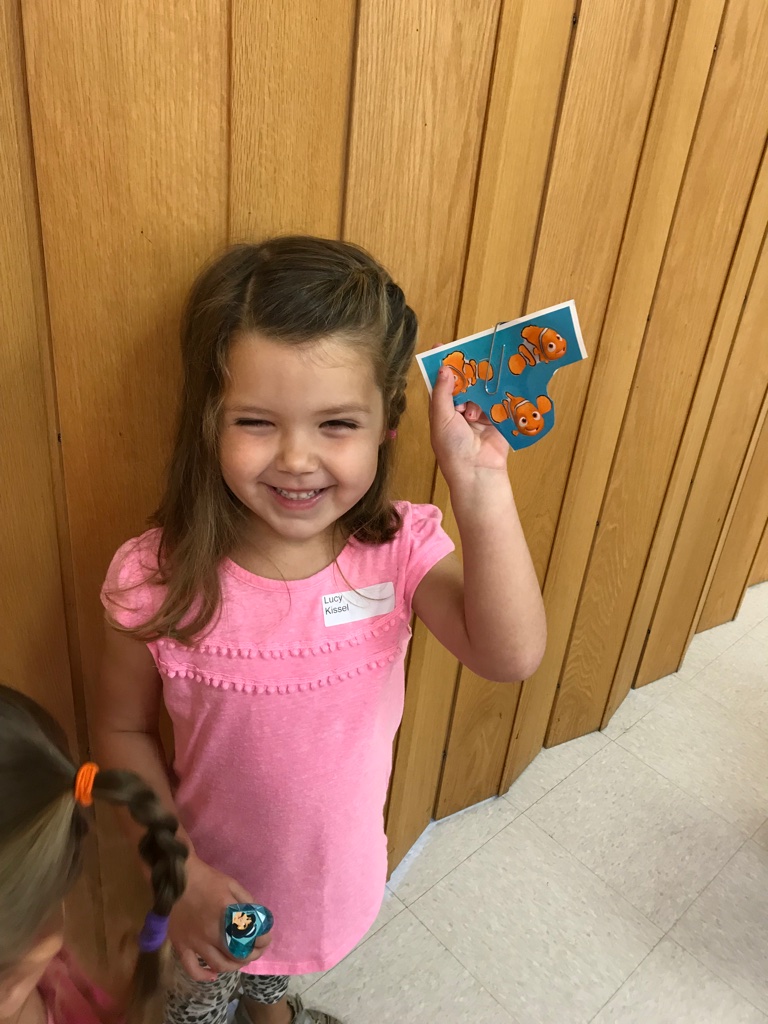 Even though it’s the same school and the same teacher as last year, Lucy was pretty nervous. Emmy loves Lucy’s classroom, though, so she took the lead and got Lucy playing away from me! Who’d have thought that would ever be the case?! They both thoroughly enjoyed the donuts and cookies for snack too! 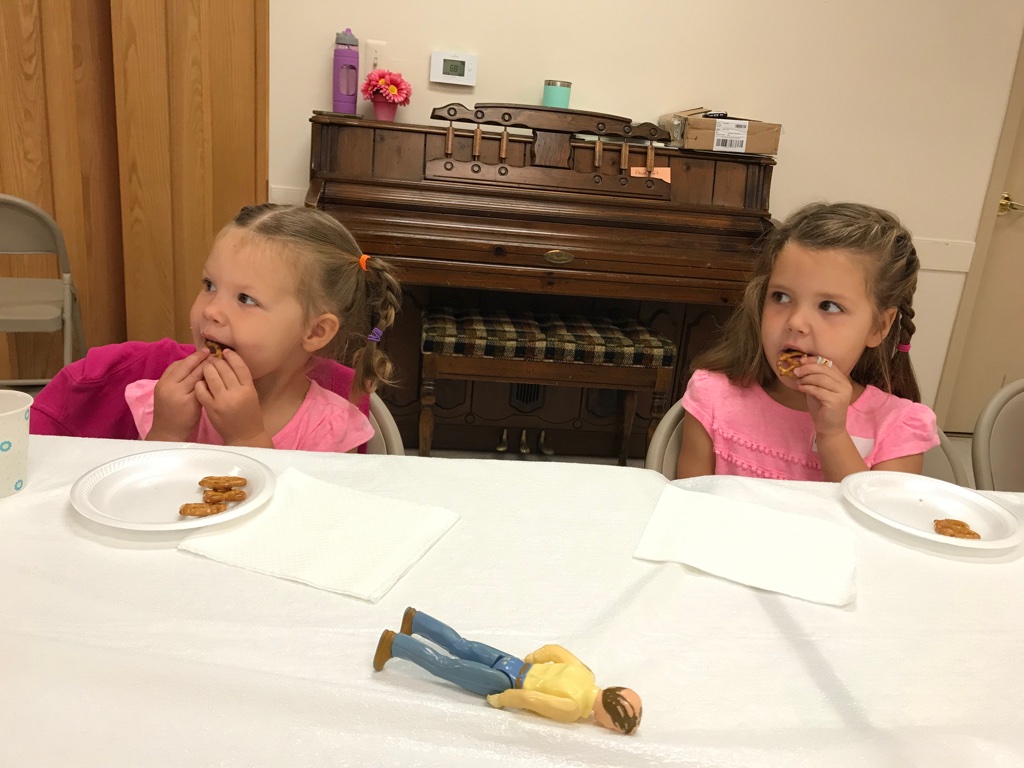 I got the girls some flip flops for next year on major clearance at Von Maur. Emmy has never worn flip flops before and has been enjoying practicing inside the house. I cannot even handle the cuteness of her chubby little feet! 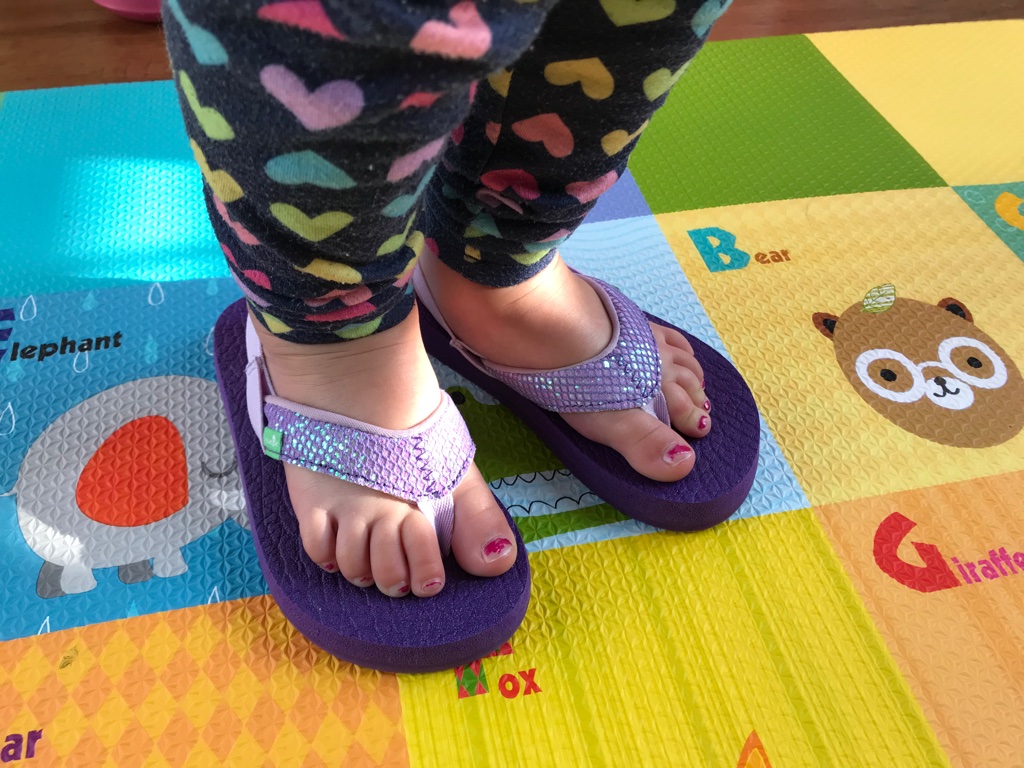 Emmy has officially entered the “will she or won’t she?” phase of napping, and it’s taking a mental toll on me! She did not nap on Tuesday, which is already a super long day for me because Matty golfs until after the girls go to bed. I needed a break, they needed a break, so Kindle time for everyone! 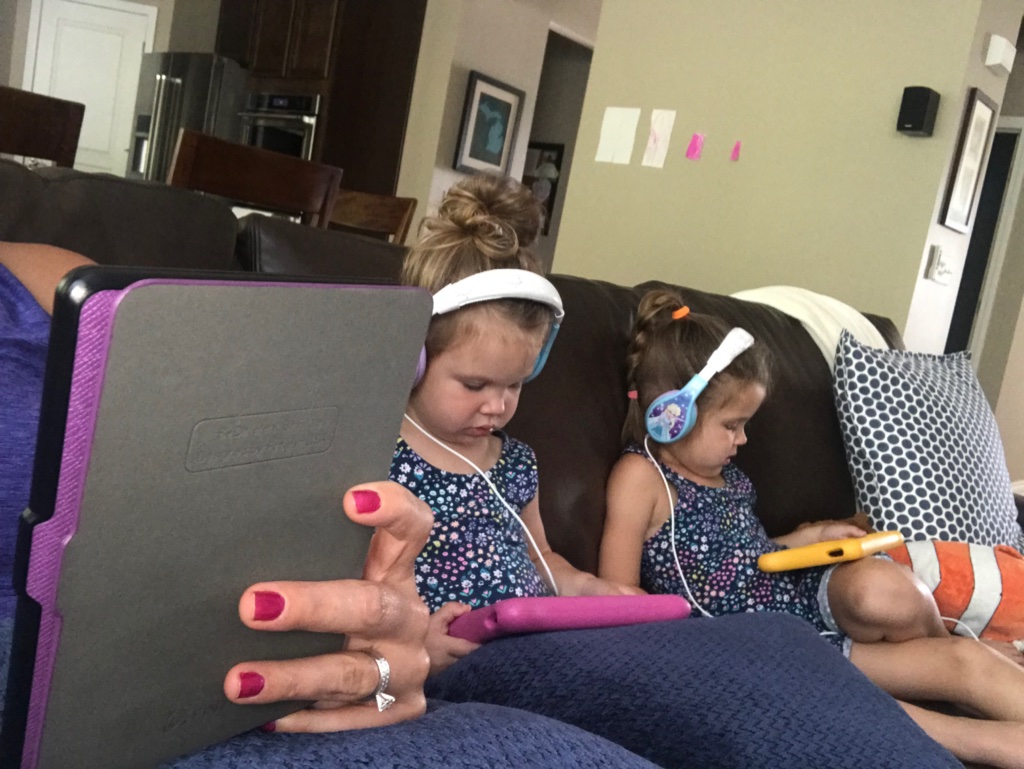 After our rest time we went on an “adventure walk” where I let the girls choose which way we go. We ended up way far out on a path in our neighborhood, and then they of course wanted to get out of the stroller and chase butterflies. 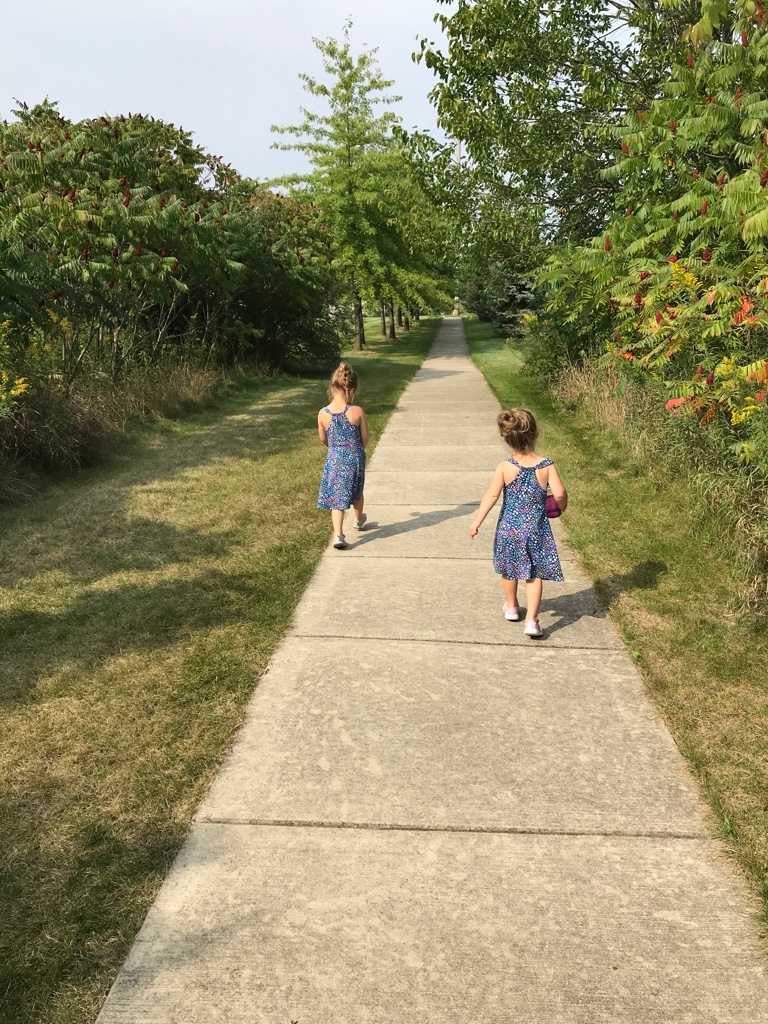 It was HOT, and Lucy is obsessed with all critters, bugs, and animals so it was taking us a sweet forever to get home. I finally wrangled them somewhat close to our house . . . and a BUNNY hopped out in front of Lucy as she was chasing a butterfly. That’s when I knew we were in it for the long haul. Or should I say long HOP? #bunnyhumor 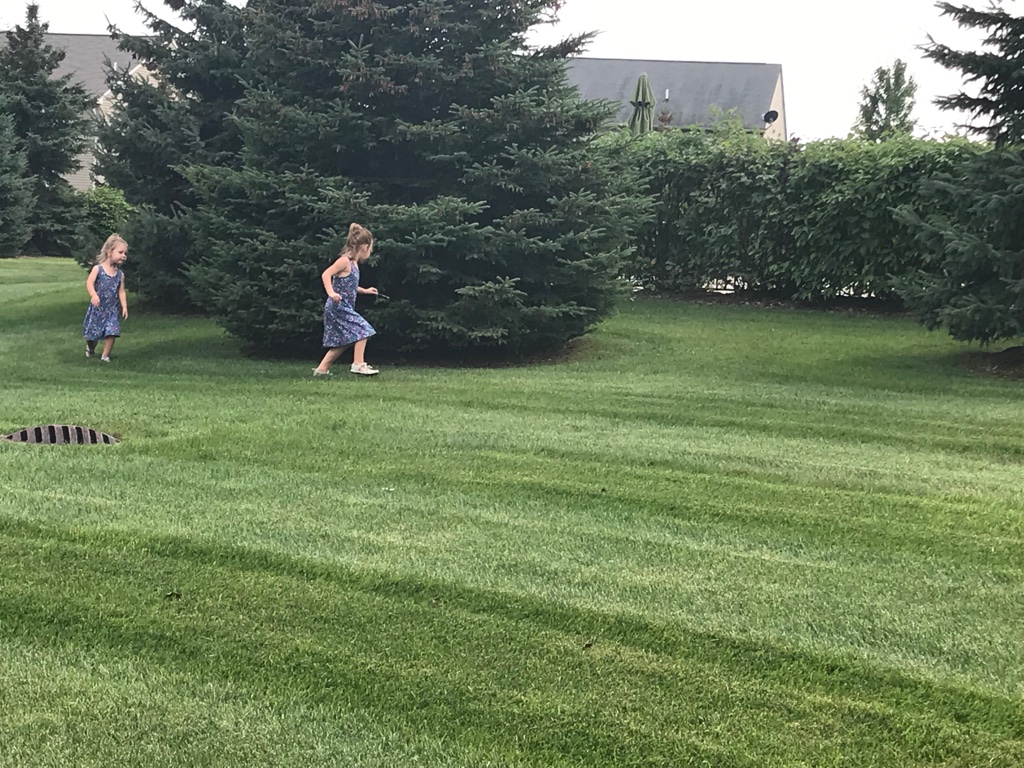 They went from tree to tree to bush to bush and back again searching for that darn bunny. They were so focused and working so well together that I gave them FIFTEEN minutes to do it while I baked/sweated in the sun, and they still threw a fit when I said they needed to be done. 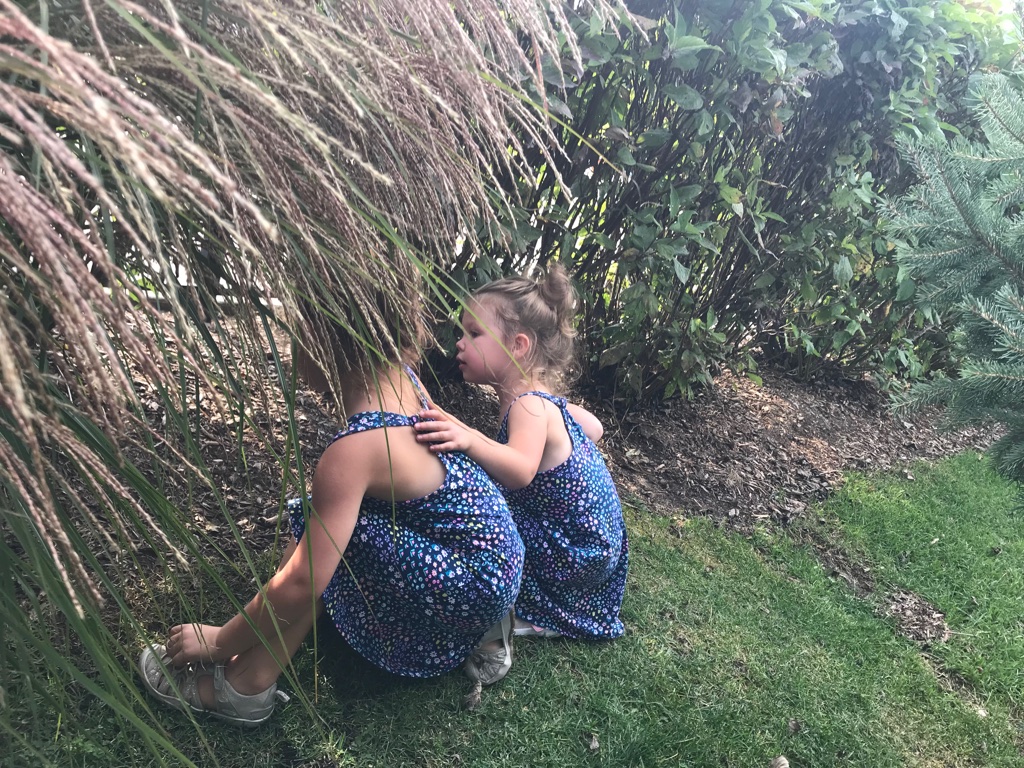 As we finally made it back to our street about an hour or so after we’d set off on our walk, I could already feel to cool AC and the refreshing glass of cold water I was about to enjoy . . . and then our neighbors came out with their two dogs to go on a walk and they offered to let Lucy hold the leash for one of them. So back around the block we went on a slooow dog walk! 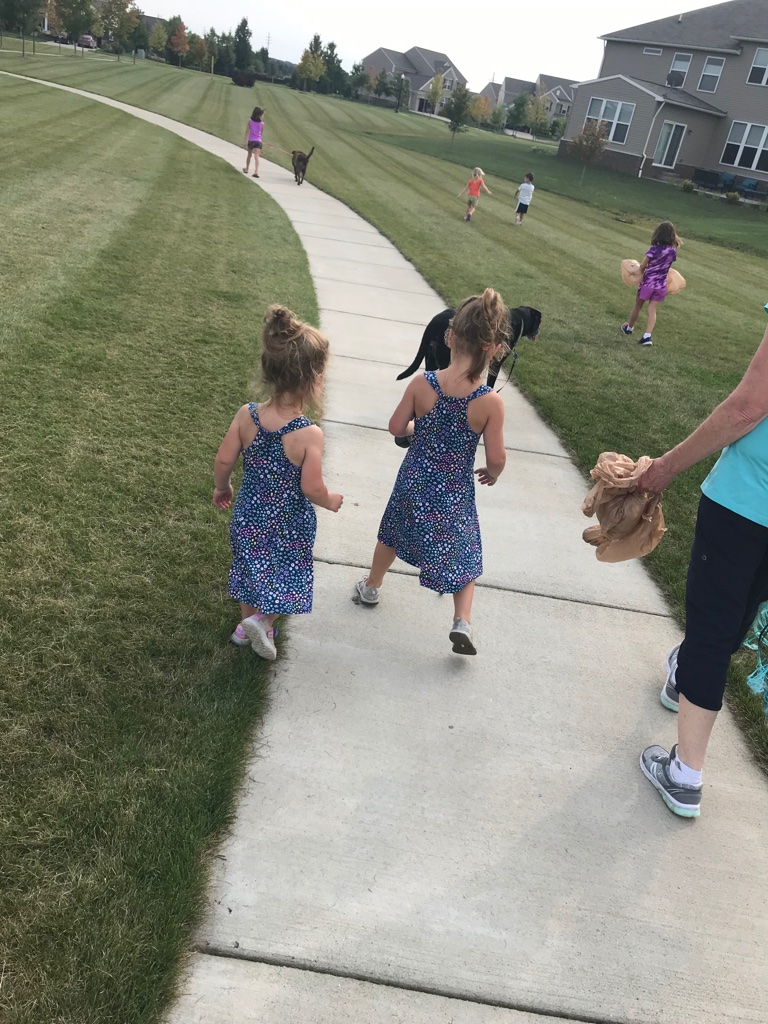 The dog walk ended with all the kiddos playing in the neighbor’s backyard and me wondering how on Earth we’d managed to be out of the house for over two hours without sunscreen, potty breaks, or water for mama. And then, THANK THE LORD, I heard the ice cream truck! It was just the incentive I needed to get the girls to head home! They happily waited for the truck to come by, and then we put the ice cream in the freezer while I made dinner. 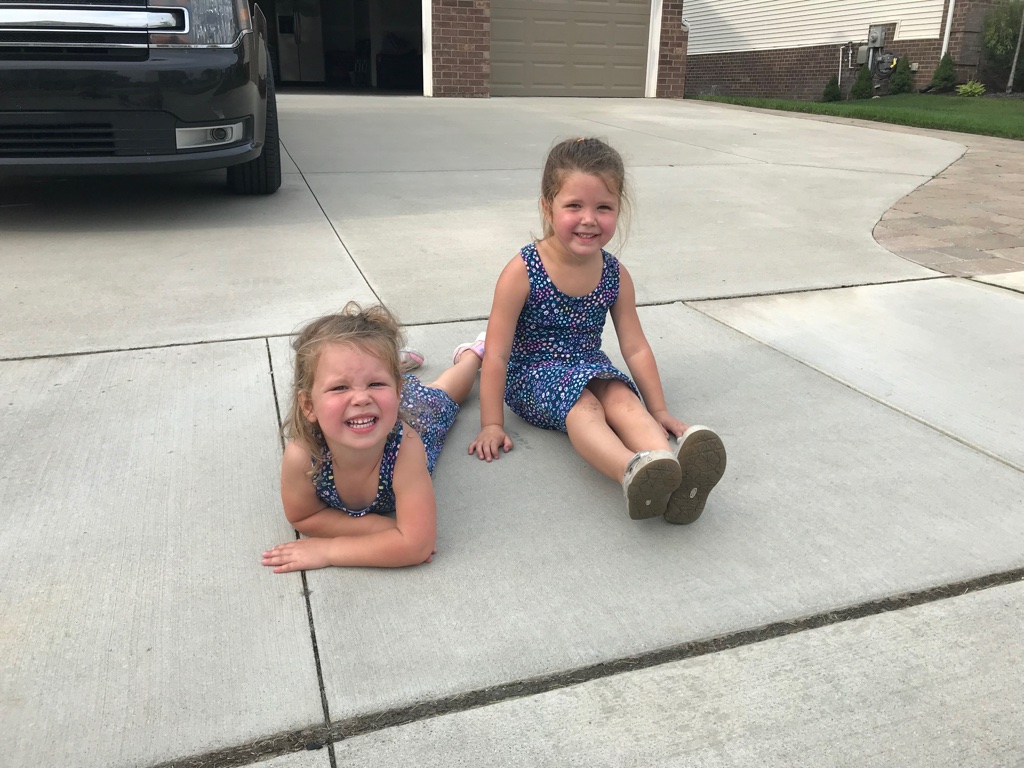 The girls each chose a birthday cake bar, and I got a Toasted Almond bar. I LOVE those and had been waiting all summer to get one. 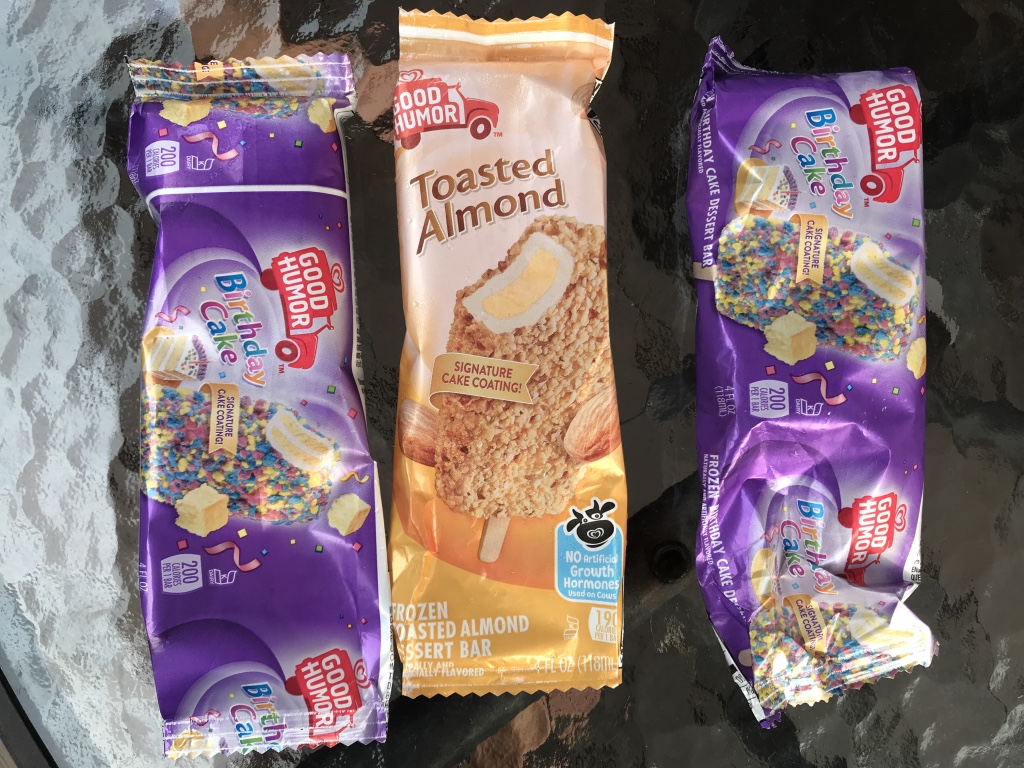 We bought mums last weekend, and the guy at the greenhouse said they needed to be watered everyday. I declared this my year to finally keep the mums alive until Thanksgiving . . . and then forgot to water them two days in a row! When Matty got home from golf on Tuesday night we watched a few shows and then randomly stayed up on the couch talking until 11:30 . . .when I remembered I hadn’t watered my mums! Here he is at 11:30, watering them for me. Husband of the year! 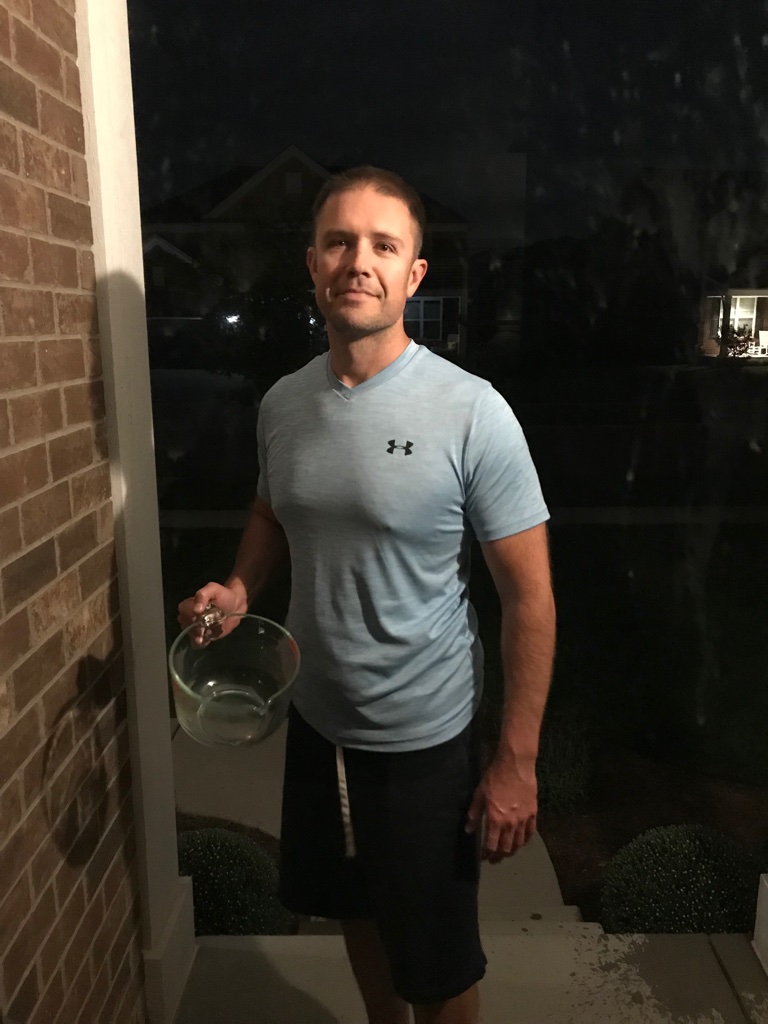 Lucy’s first day of preschool was yesterday, and she did great . . . right up until it was time for her to go sit on the carpet and me to leave. The poor thing started crying so hard. I knew she’d be fine in a minute or two, but it still made my mama heart sad. 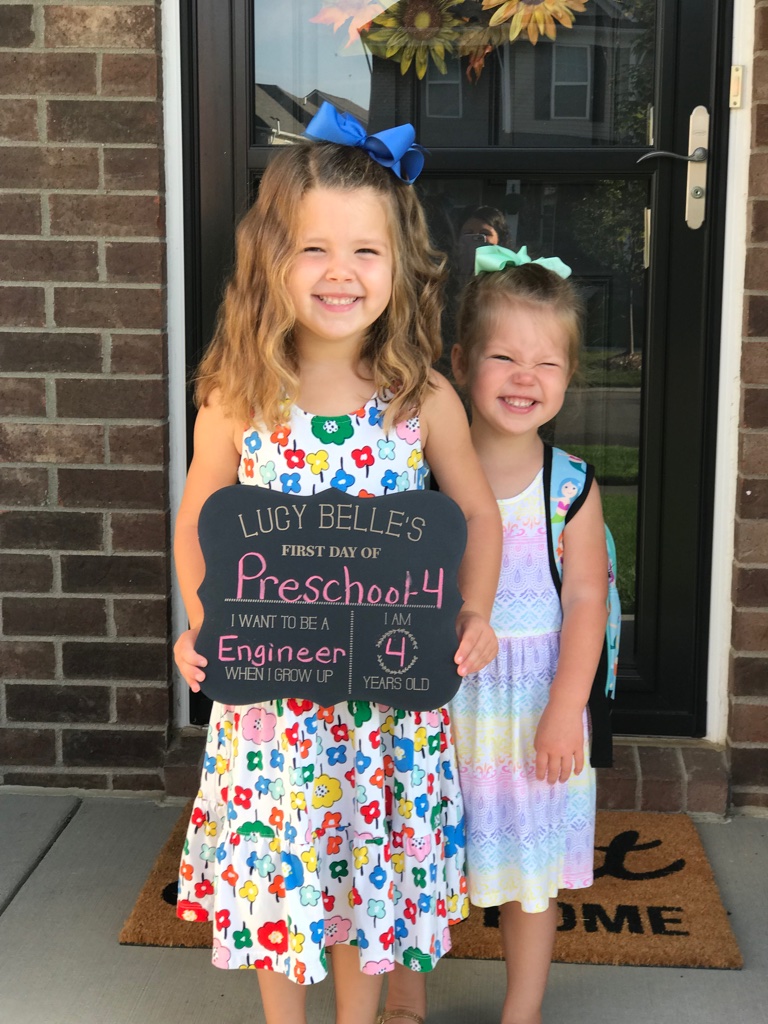 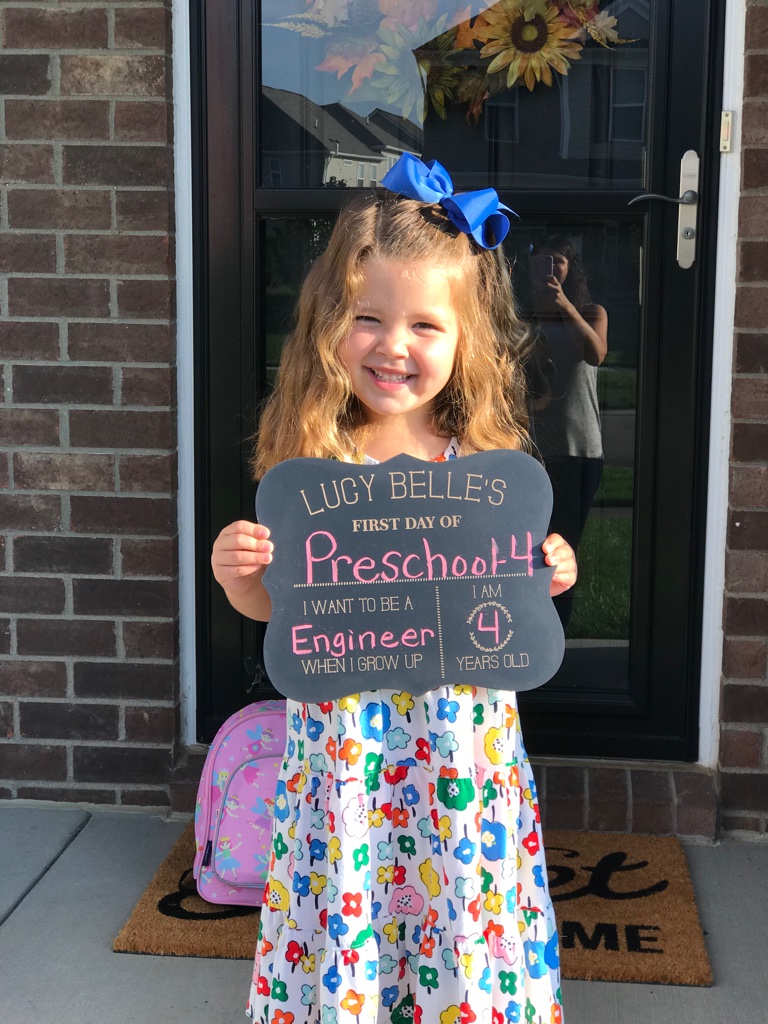 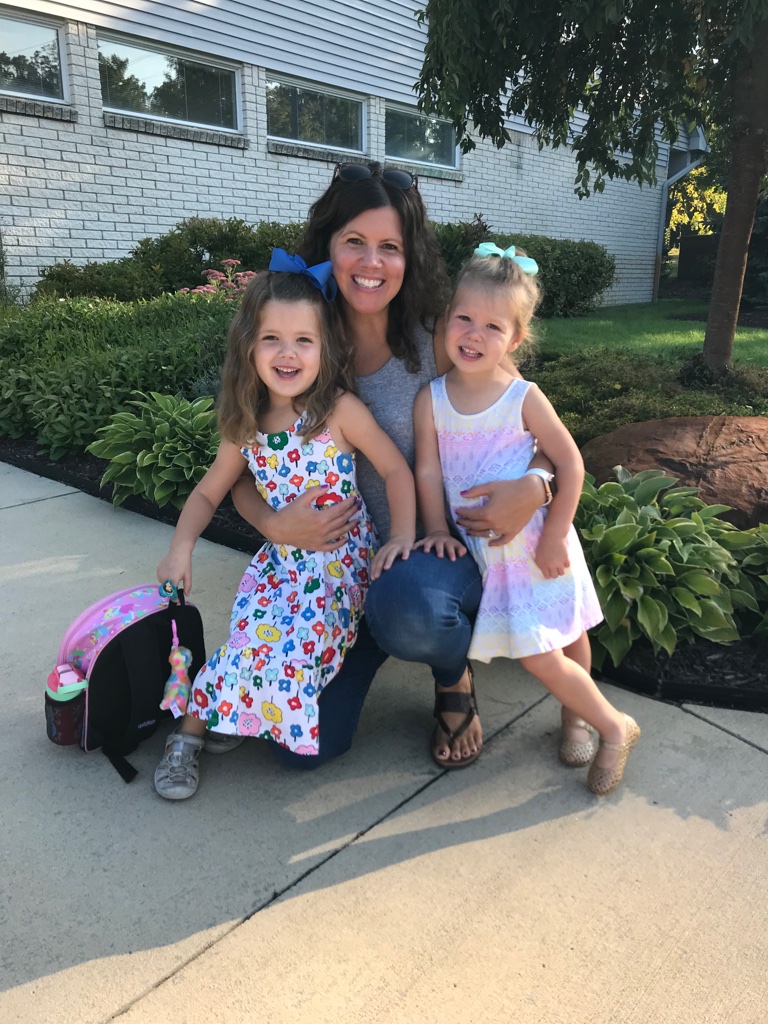 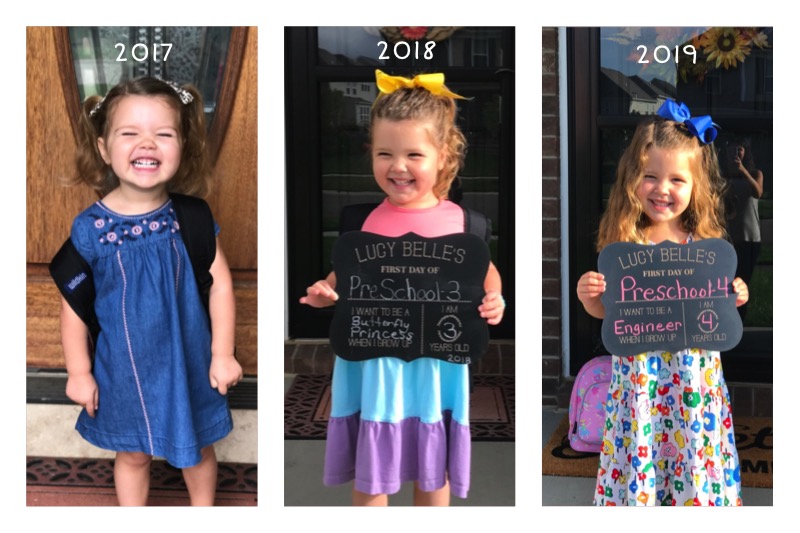 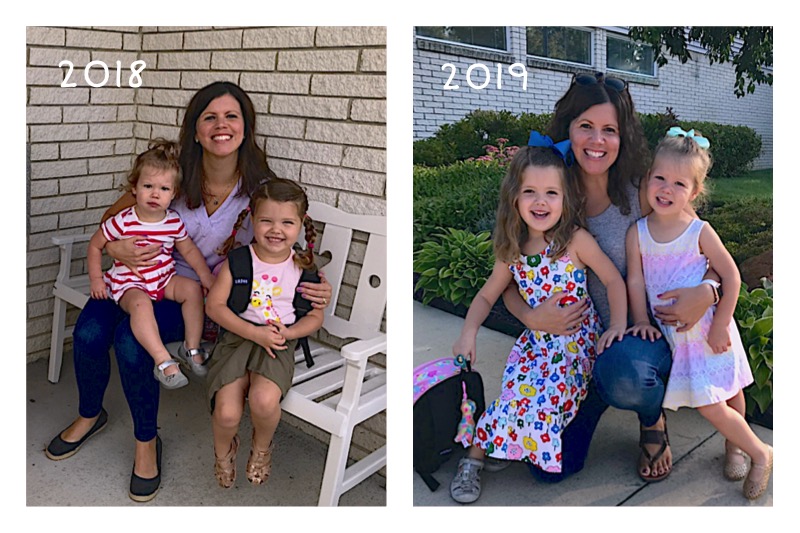 When Lucy cried at drop off, I told her we could do whatever she wanted to do after school so that she’d have something to look forward to. She said she wanted to bake cookies! M&M cookies for the win! 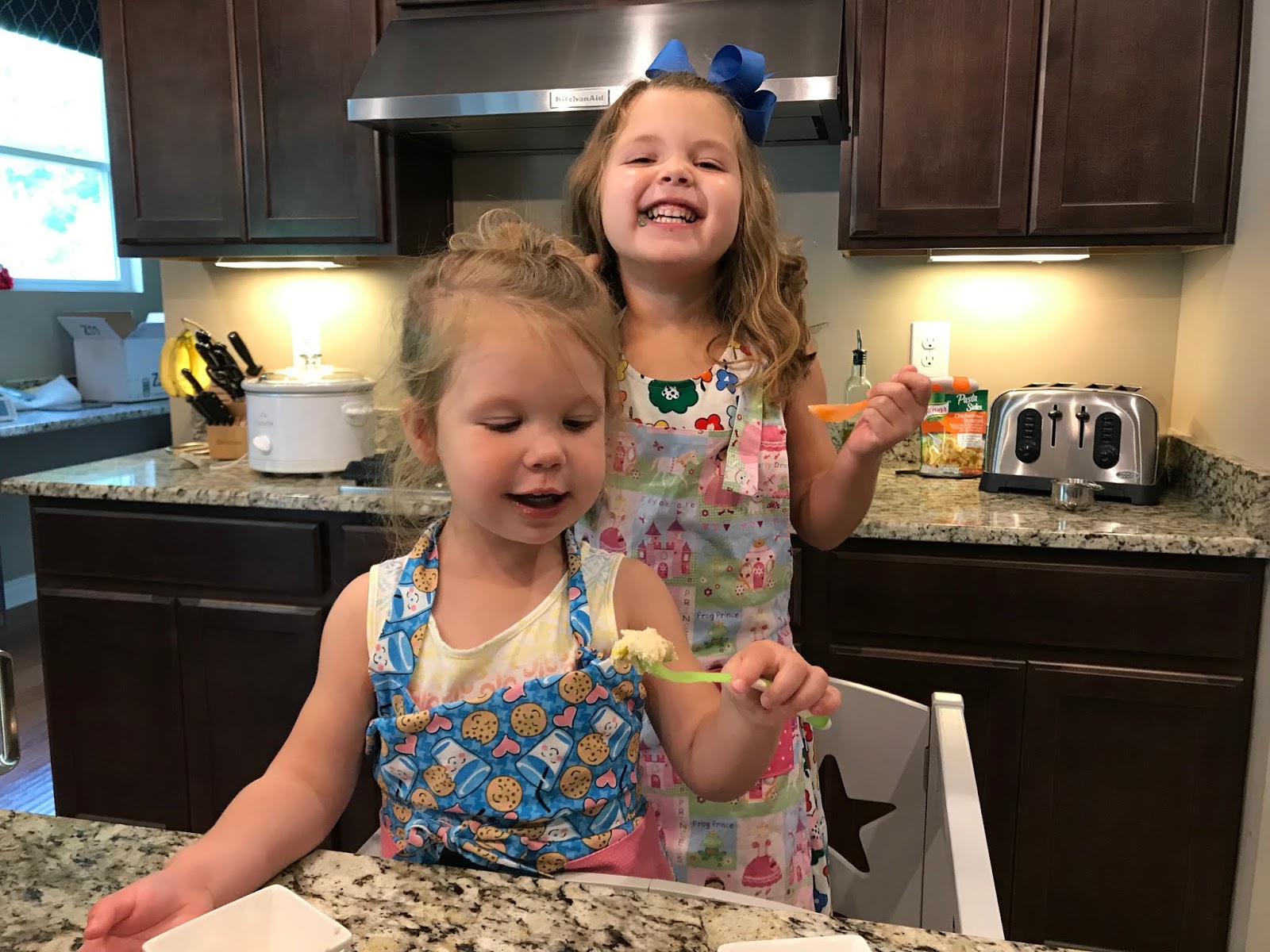 We got a couple of good storms yesterday, including one while we were eating snack on the front porch. We had come out through the garage, and the front door was locked, so we were kind of stuck until the rain let up. 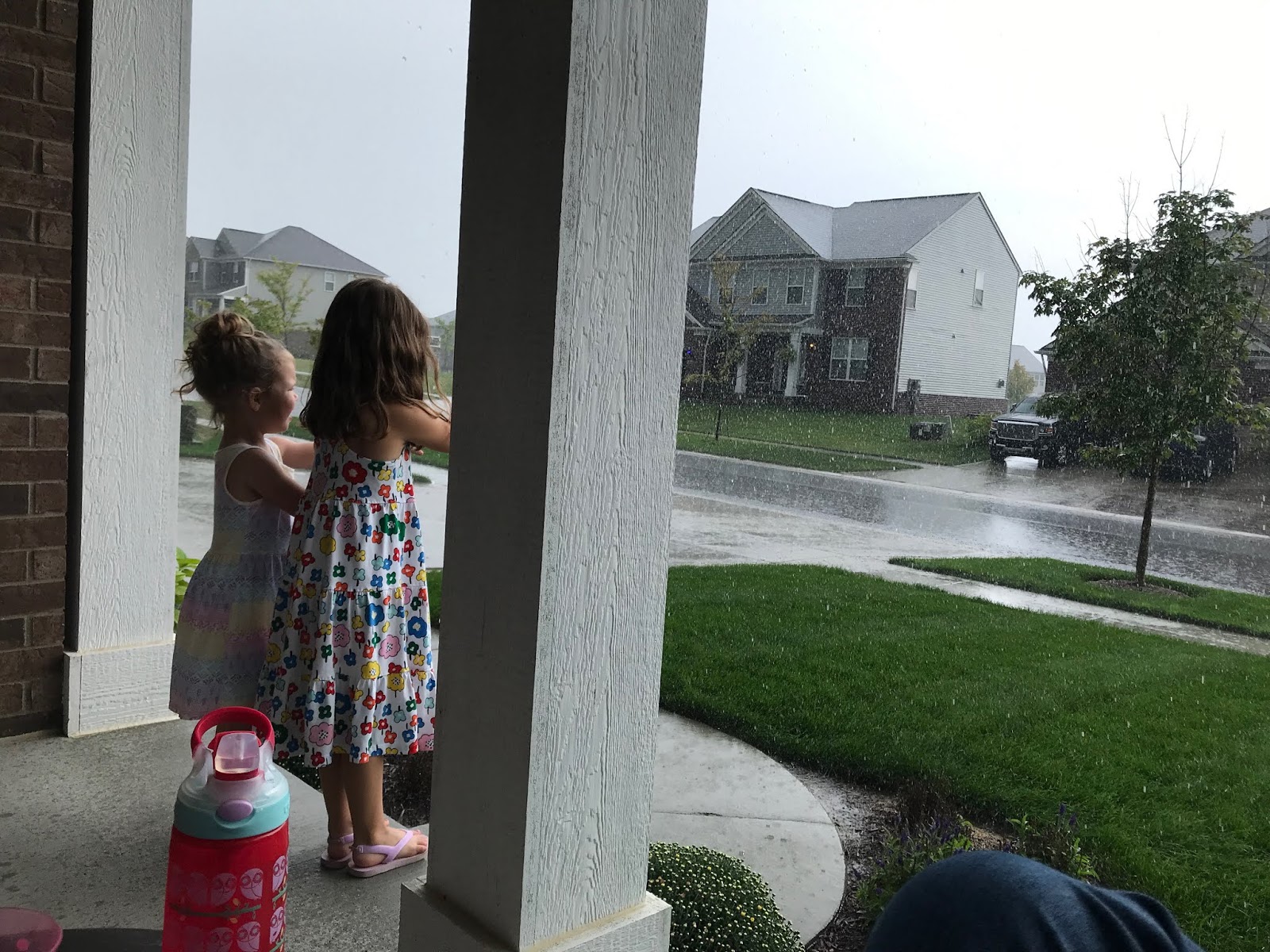 All in all it’s been a pretty good week. Even though she’s not napping during the day, Emmy is going to bed and sleeping better at night! Woo hoo!
Have a great weekend!
XOXO