Where did my blog design go???
It’s a mystery, and I’m still working on solving it.
I’ve looked into it a little bit but, truth be told, Matty’s been in Mexico for work all week and my evenings have not been as productive as I thought they would be. Sure, I cleaned out my closet, but the clothes are still in a pile on the floor instead of in bags and dropped off at the Salvation Army. Yes, I spent some time googling how to fix my blog design . . . but I also spent more time than I care to admit binge watching Suits in the evenings. It’s actually been quite nice, but I’m definitely ready for Matty to come home this evening!
All that to say . . . the blog shall remain a shell of its former self until I can either figure out how to get my old design back or figure out which new design to buy. Either way, it’s not happening until after Labor Day!
The girls and I have had a lazy week, and we’ve all really enjoyed it! I have a few pictures, but nothing too groundbreaking. The weather has been AMAZING, so we’ve been doing a lot of outdoor play.
One of our neighbors gave us this bike, and Emmy is knocking it out of the park! Matty tried to help her learn how to ride it on Sunday before he left for Mexico but said she wasn’t really able to do it. Boy is he going to be surprised when he gets home later today! 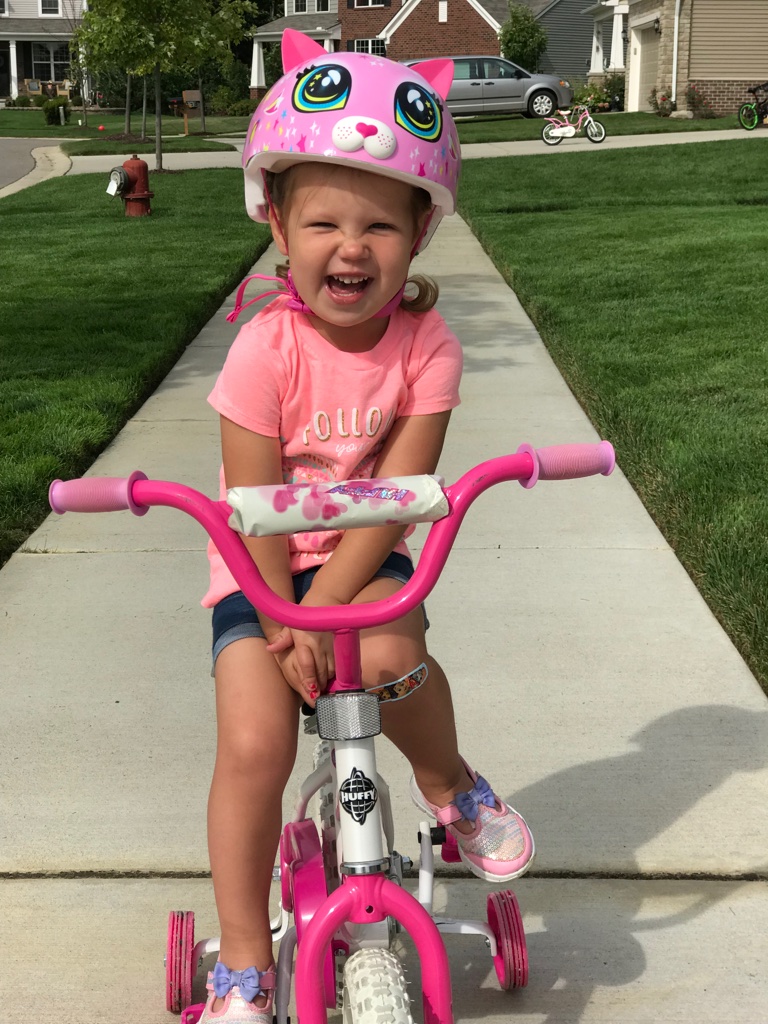 Not only has Ems figured out how to pedal, but she’s been riding it all the way around our block! 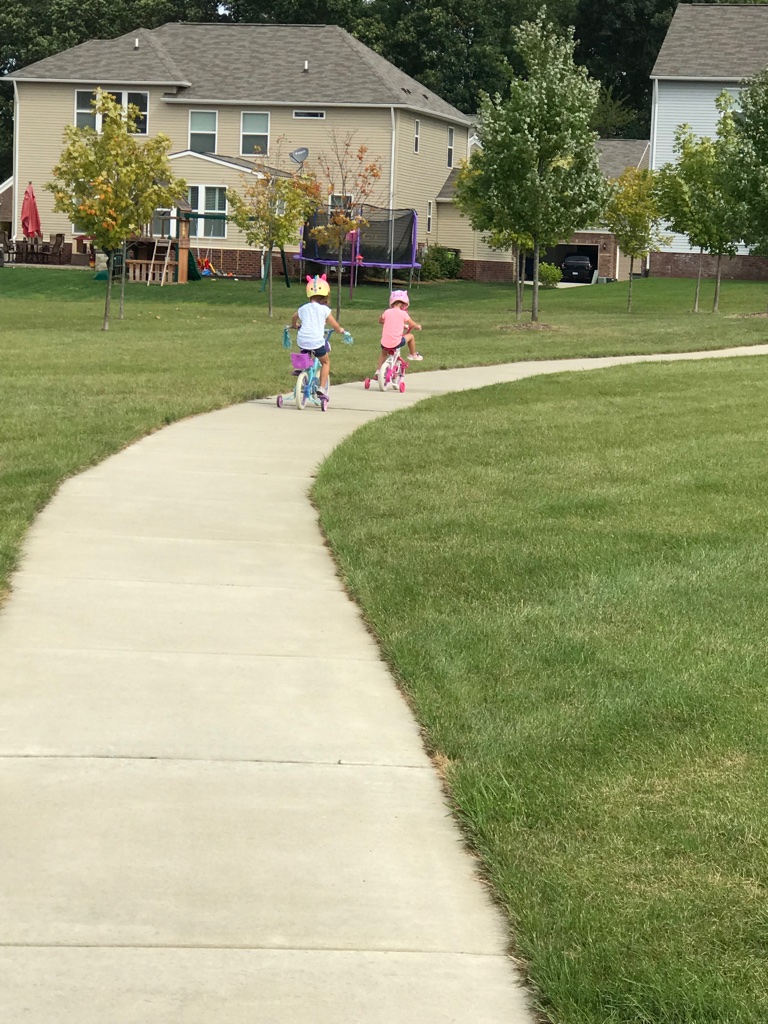 We played on our neighbor’s playground the other day, and there’s a spot where the kiddos like to play restaurant. Emmy was my server and I ordered grilled cheese, tomato soup, french fries, and a chocolate malt . . . it’s my imaginary meal, and I can pig out if I want to! 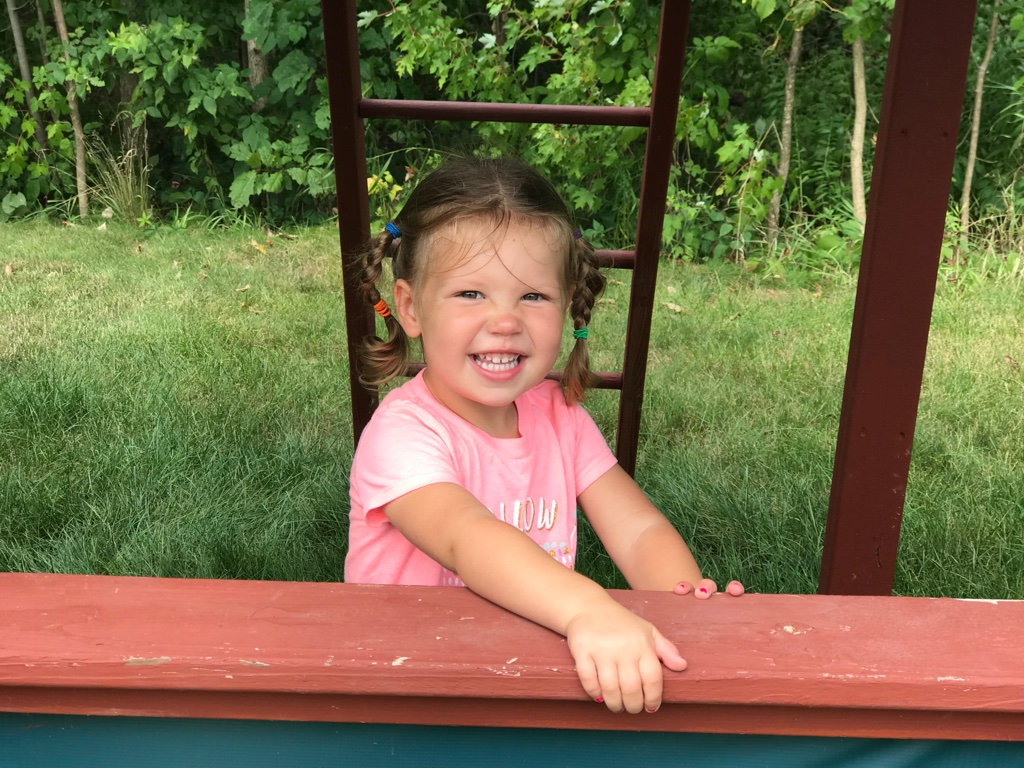 Matty ordered a new hat that arrived while he’s been gone, so Lucy was kind enough to model it for a picture. 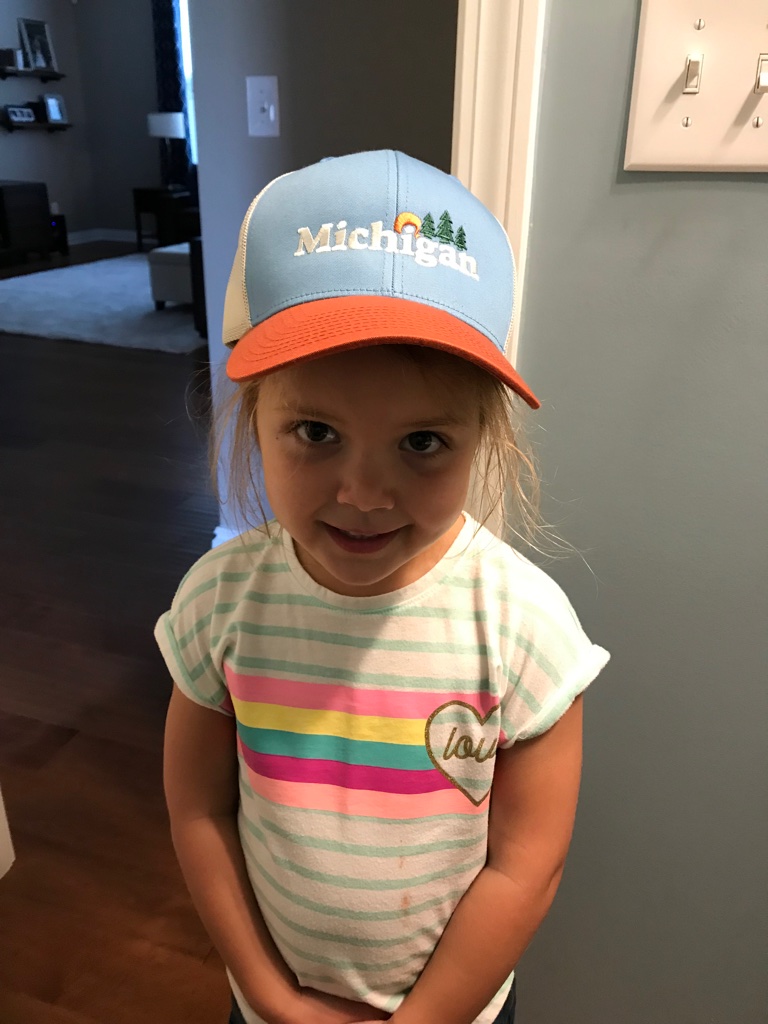 Side note: He ordered the hat from a website called Unparalleled Apparel. I picked out this sweatshirt and love it! It’s so cozy and soft, and will be perfect for the chilly nights at the cottage this weekend! If you’re in the market for some Michigan gear that’s not college themed, this website could be for you! 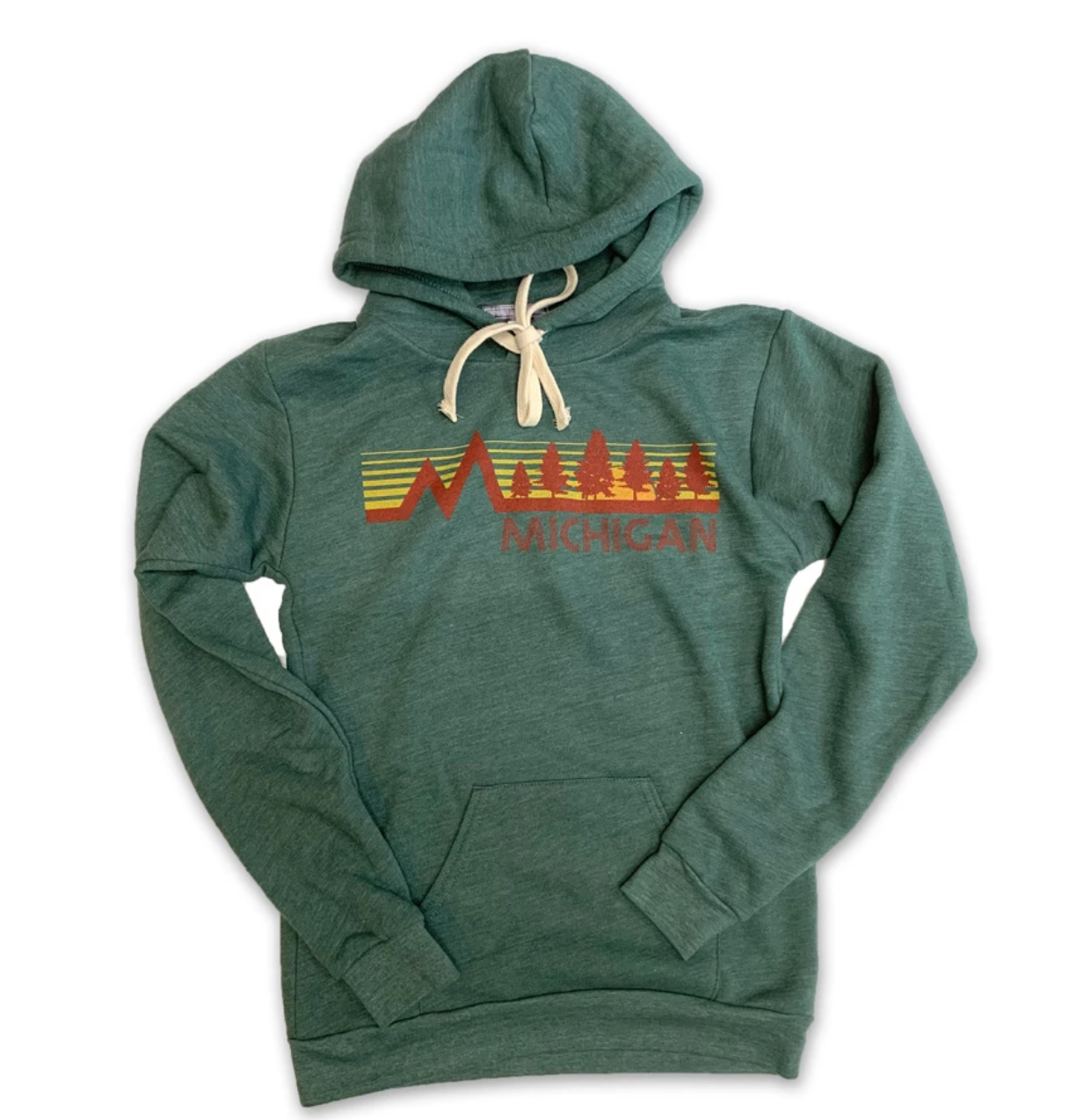 My mom made library bags for the girls, and we tried them out this week. They had a great time selecting their books and putting them in their bags! 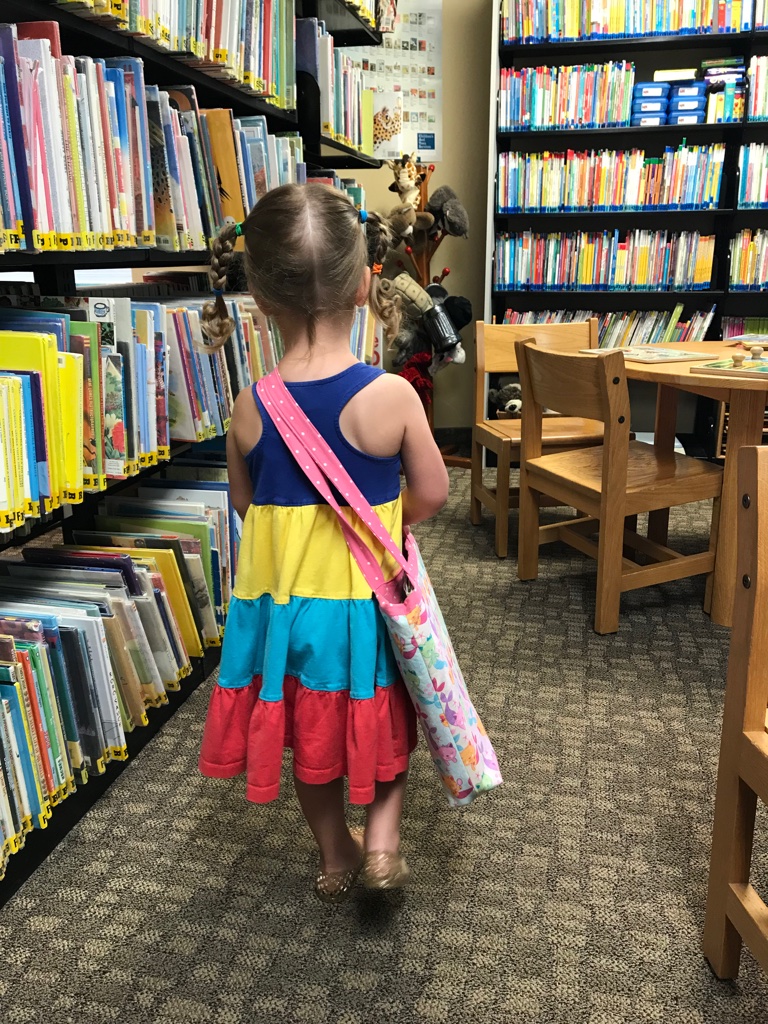 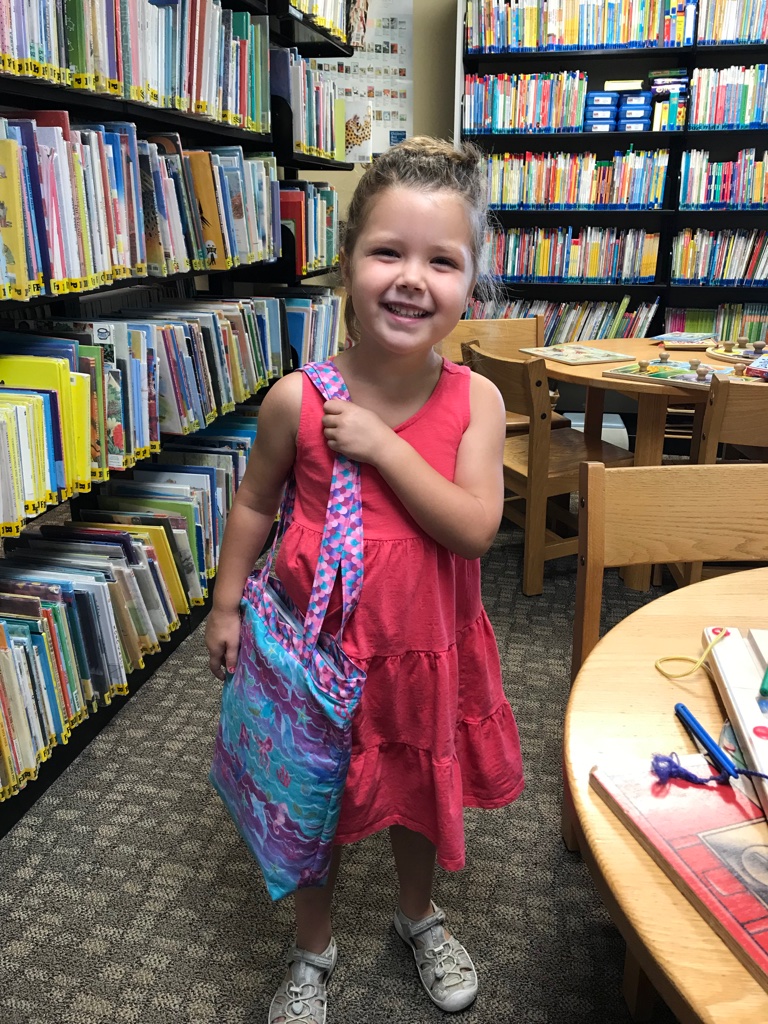 We’ve been playing a lot of Go Fish lately, and it’s been delightful! Both girls enjoy it, and Emmy does a great job with a little help from mama. 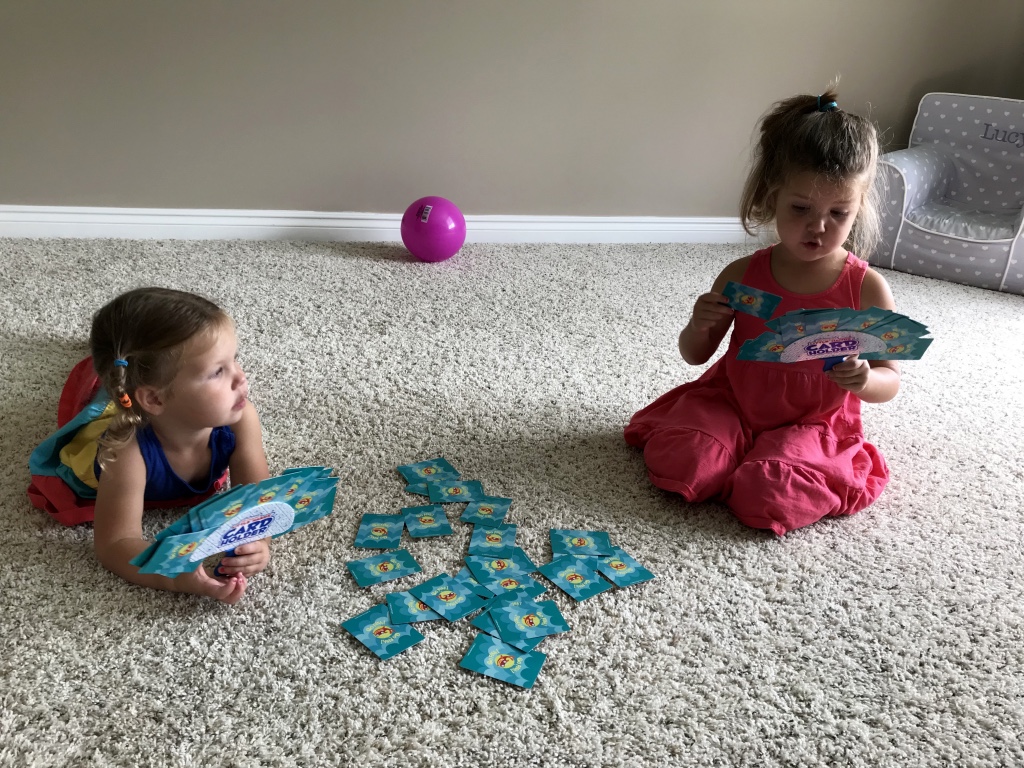 Sisterly love during a beautiful outdoor breakfast yesterday. What am I going to do when I have to start feeding the girls inside again?!
The answer is vacuum. Lots of vacuuming! 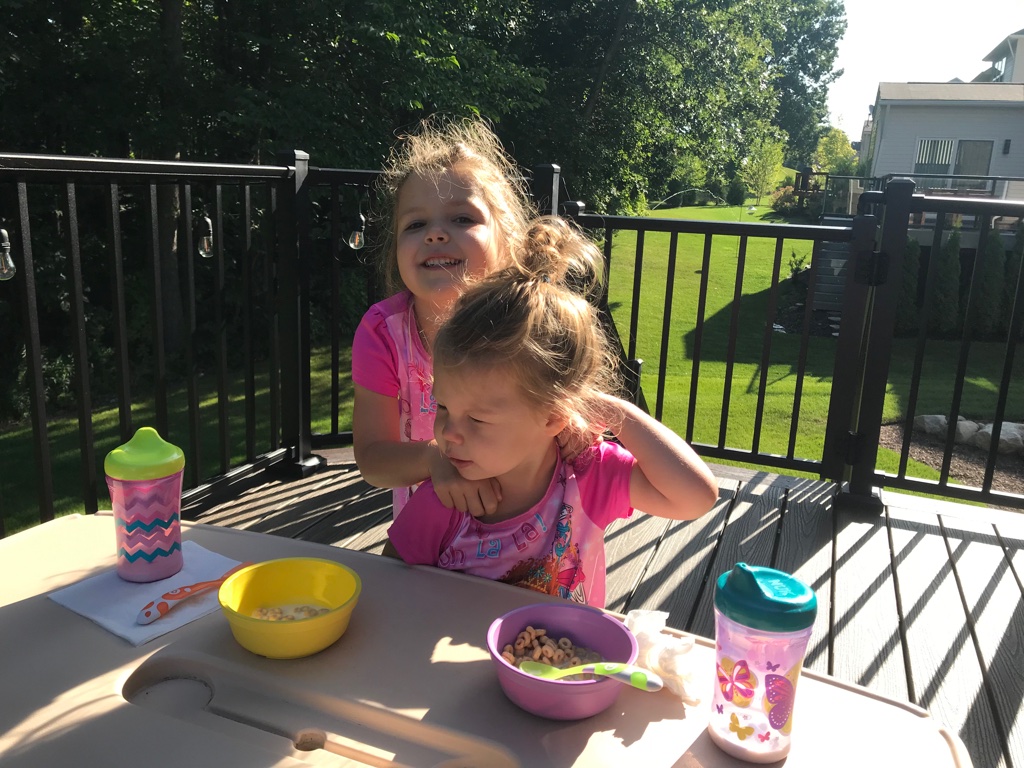 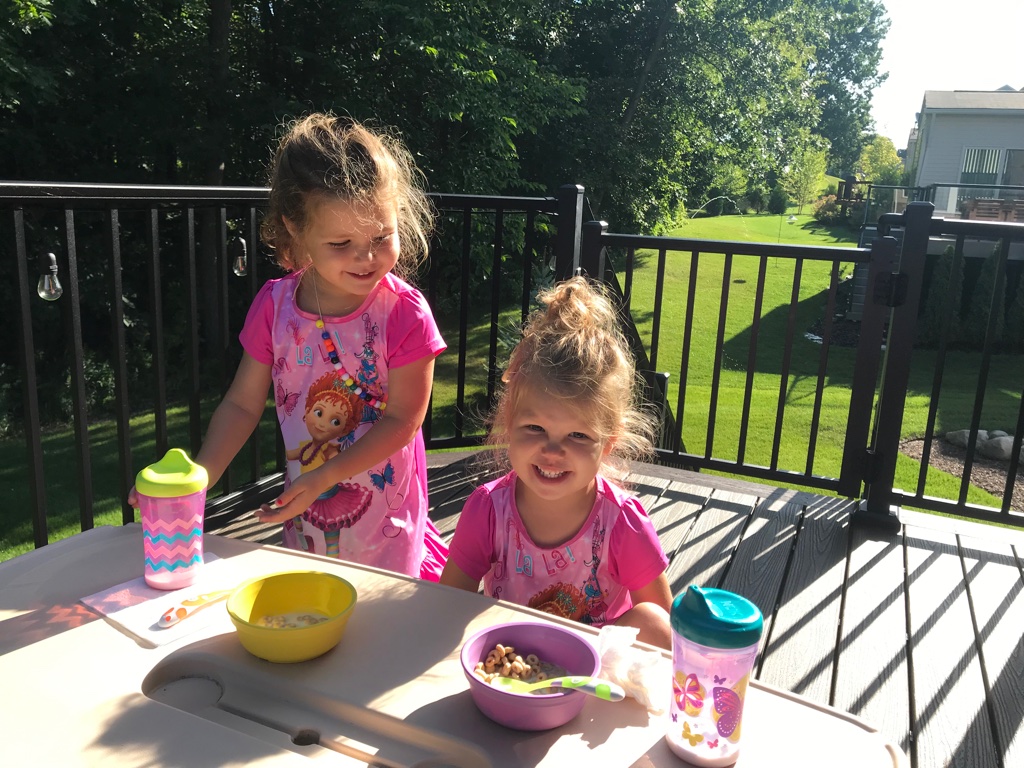 We’ve been able to FaceTime with Matty every night. Apparently he thought we were quite the crew last night because he took these screen shots while we were talking. The girls LOVE when he gives them a tour of his hotel rooms! Lucy likes to see the potty and Emmy likes to see the tub. 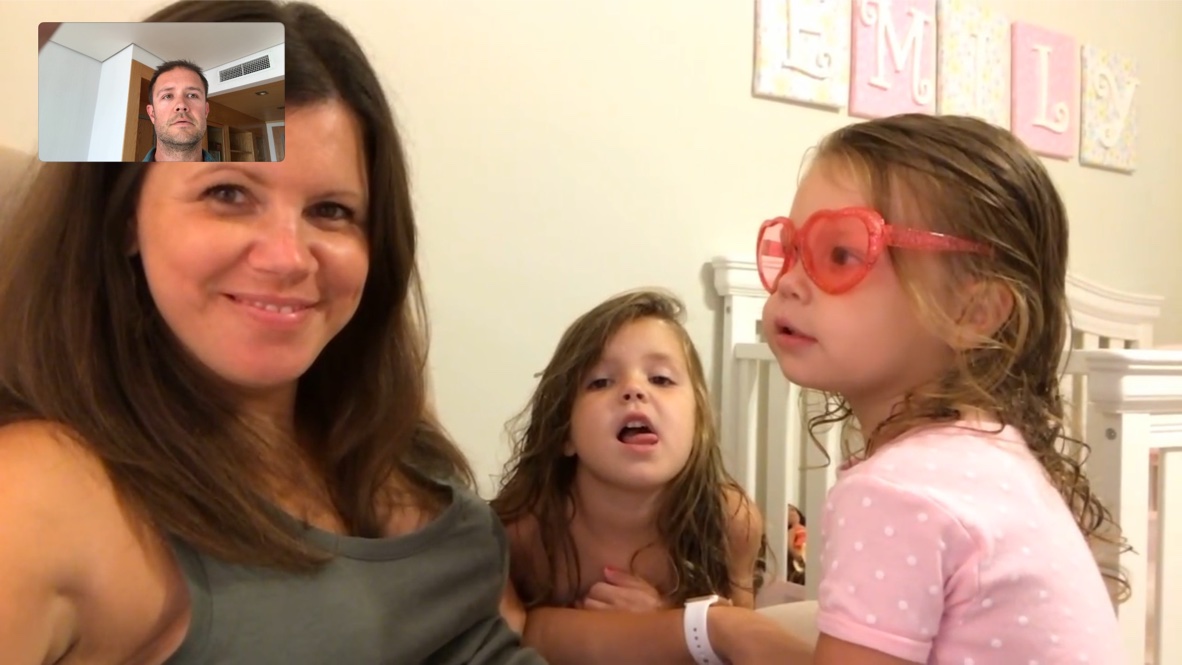 Matty once told Emmy that she looked like Elton John in these glasses, so now she always refers to them as her “Elton John glasses” which is hilarious. 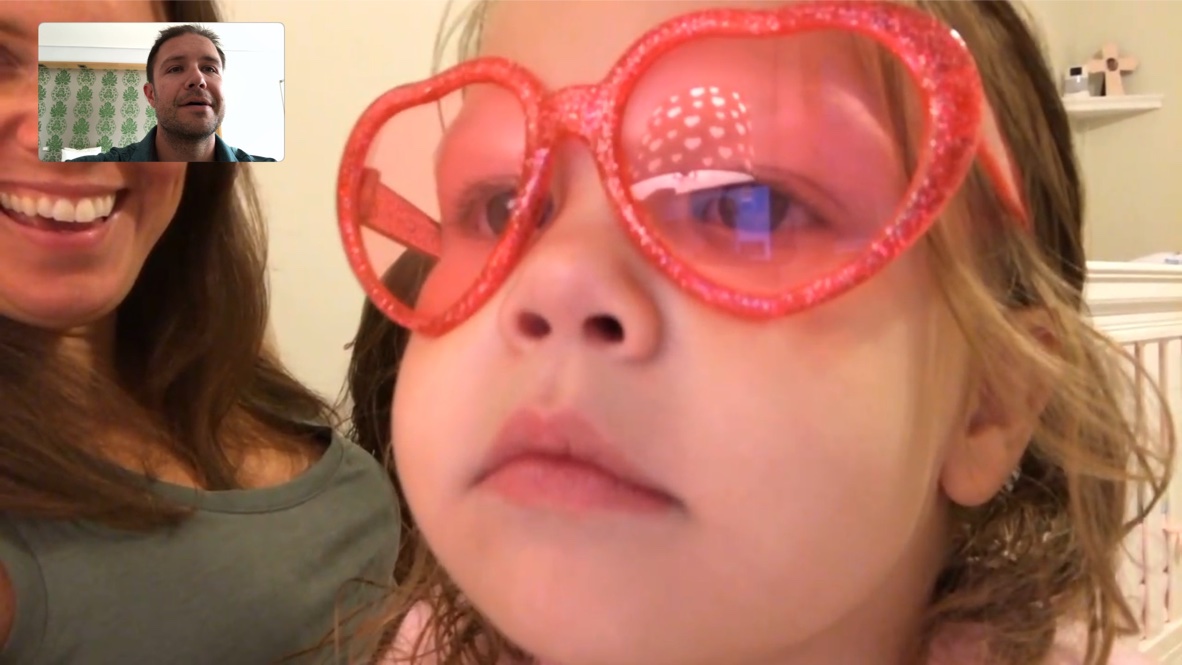 We’re off for one last long weekend at the lake before school starts and it’s back to reality. I’ll be back here on Thursday.
Have a great long weekend!
XOXO