Happy Monday!
We had a busy weekend celebrating the dads in our life.
But let’s back up a bit to last Thursday. It rained most of the day, but the girls needed to get out for a bit so we got out their umbrellas and went outside to play. They found the one spot where the water was pouring out from our gutter and stood under it, filled up their umbrellas, and dumped the water over their heads! 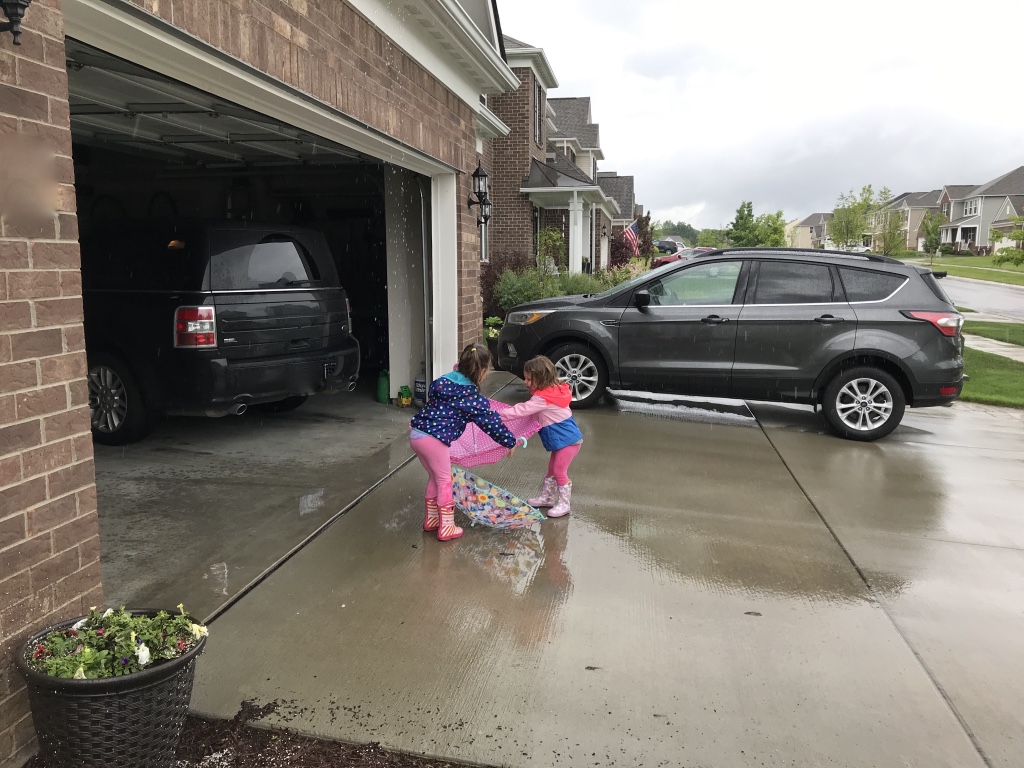 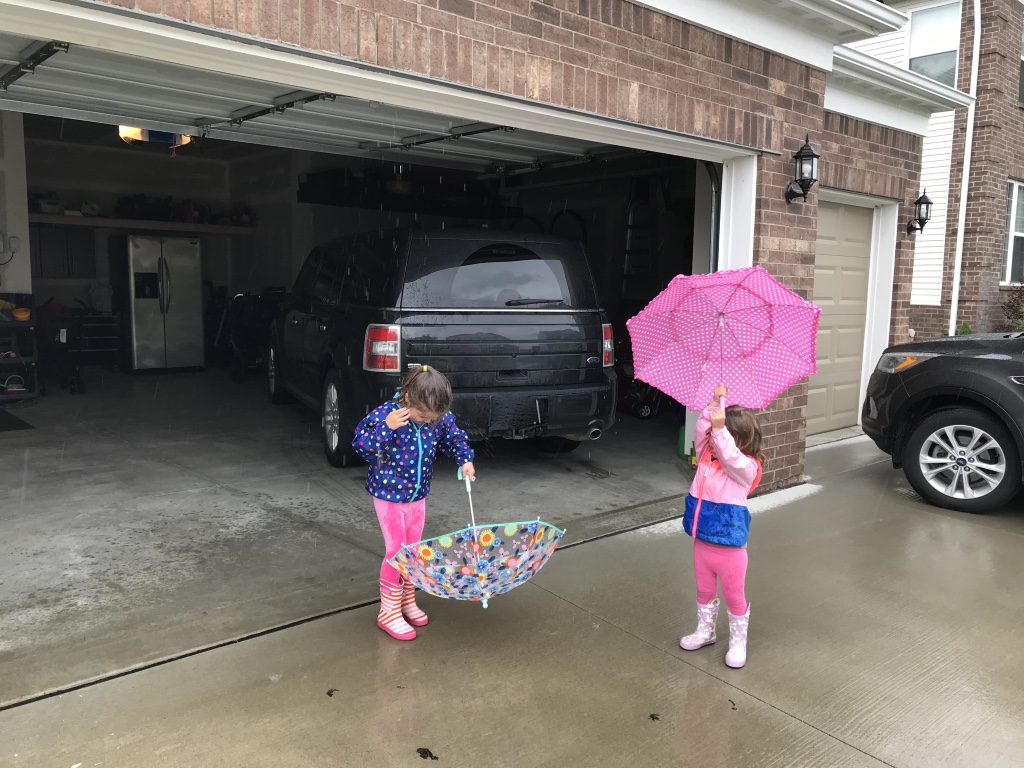 Matty went for a haircut after dinner on Thursday and took Lucy and her whale with him. 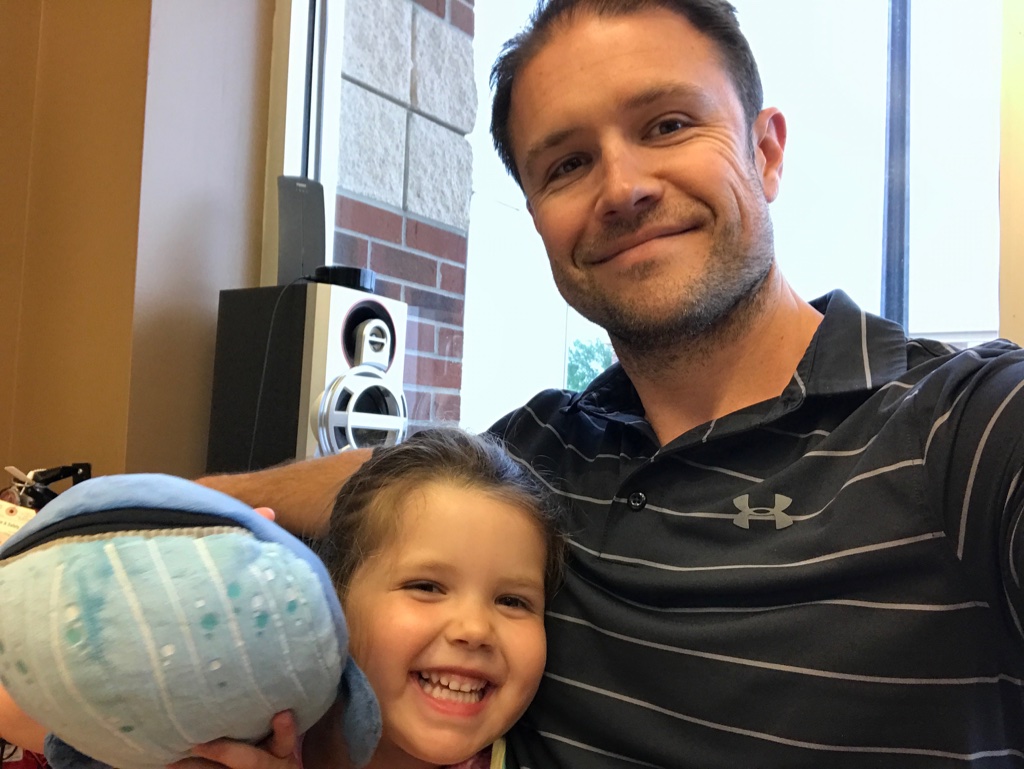 I took the girls to DSW with me on Friday to look for some shoes for me and, of course, they wanted to try some on. I let them each pick one pair to try on which was fun, but then they learned the tough lesson about not buying shoes when we truly don’t need them. Believe me girls, I feel your pain! It took me a long time to learn that lesson! 😉
Lucy’s shoes were super cute, but a tad too small. 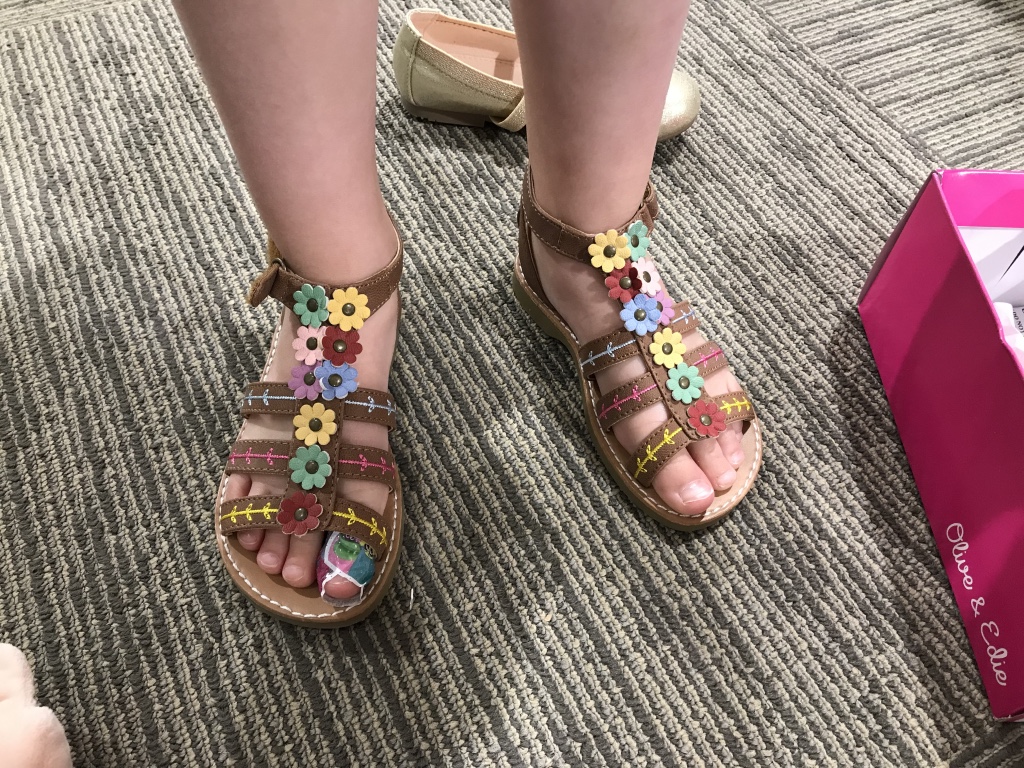 And Emily was so proud of these star sandals that if they had had them in her correct size I may have ended up breaking my own rule! 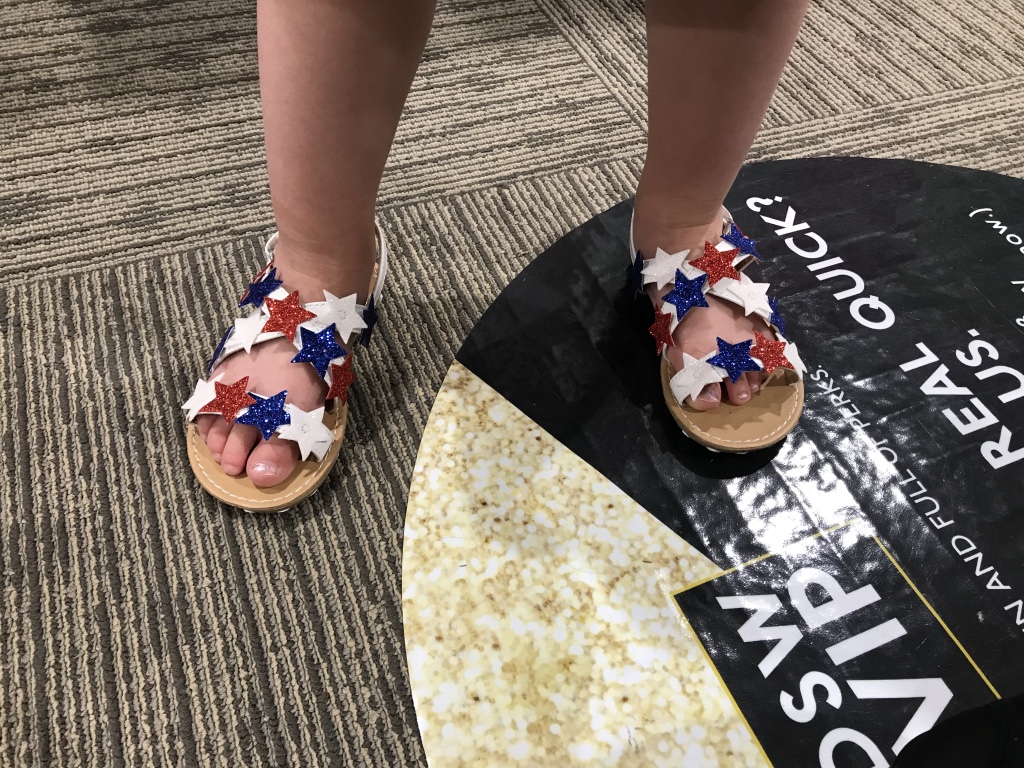 Matty golfed on Saturday morning while the girls and I were worked on some Father’s Day projects and did some cute hair dos. 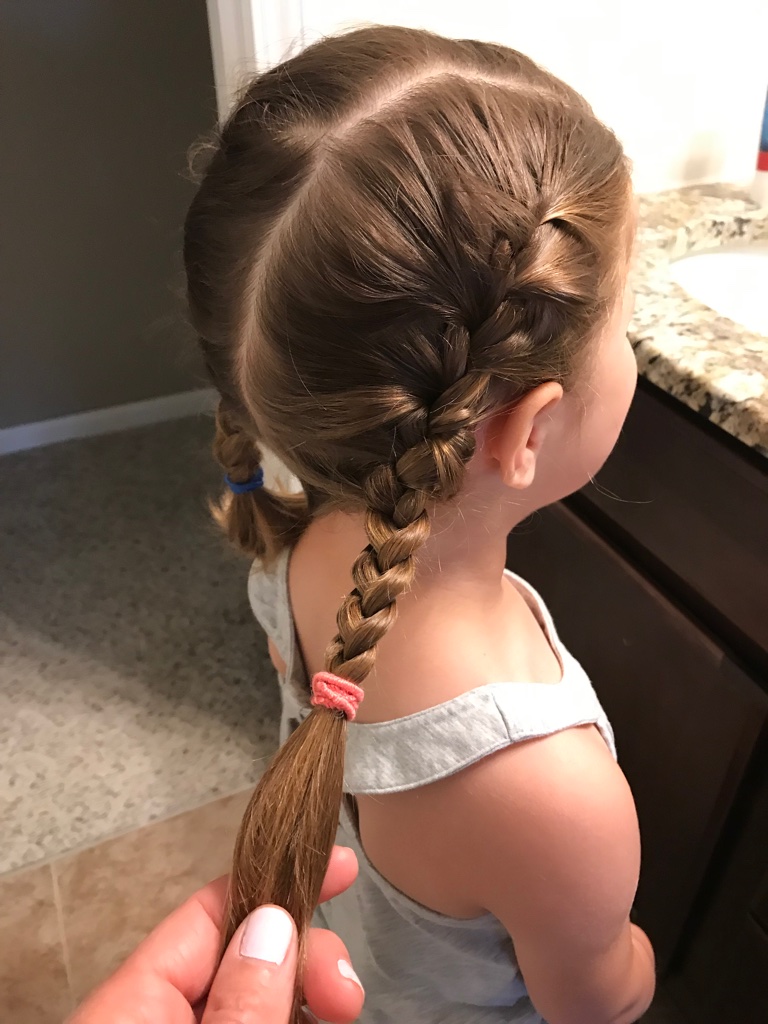 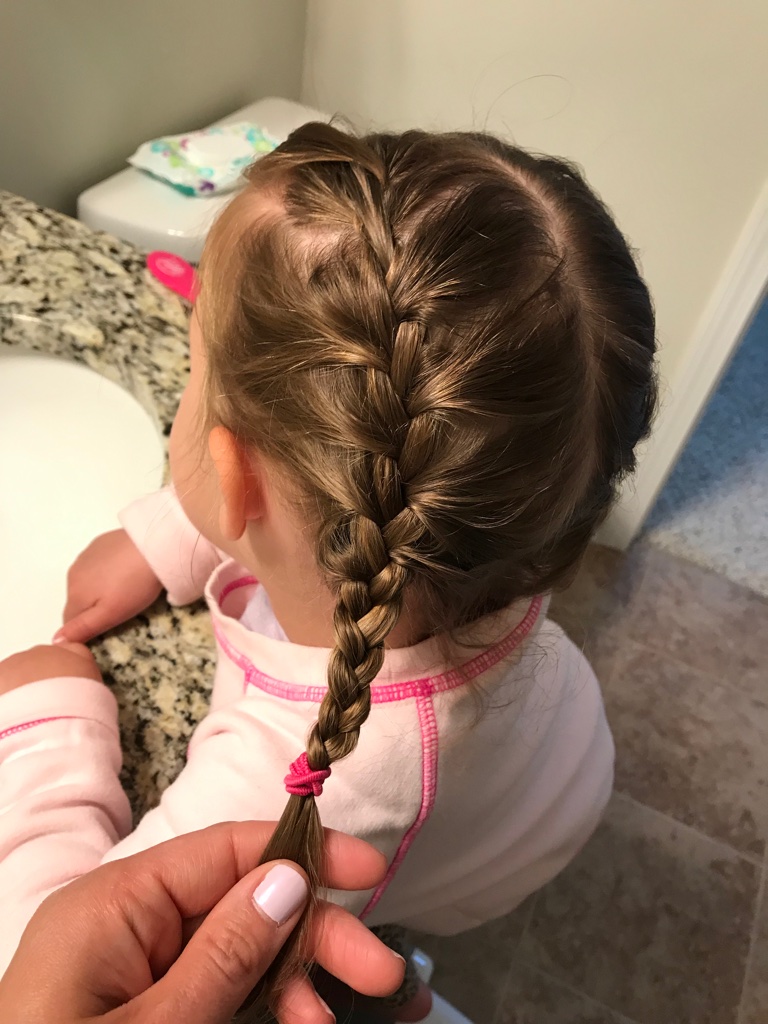 Matty had mentioned that he wanted a bottle opener to go next to our fridge in the garage. Ask and you shall receive! There’s nothing like having a three dimensional cattle dog looking at you every time you open your beer! 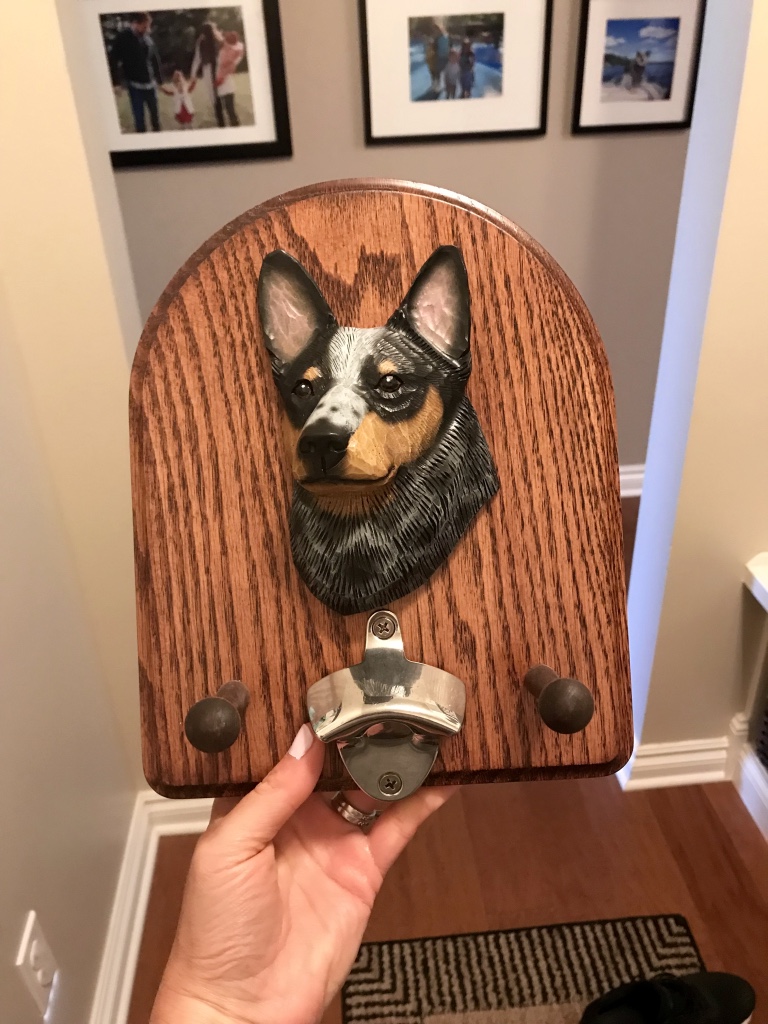 We ended up giving it to him Saturday afternoon because Lucy saw it, and nothing’s a secret once Lucy sees it! 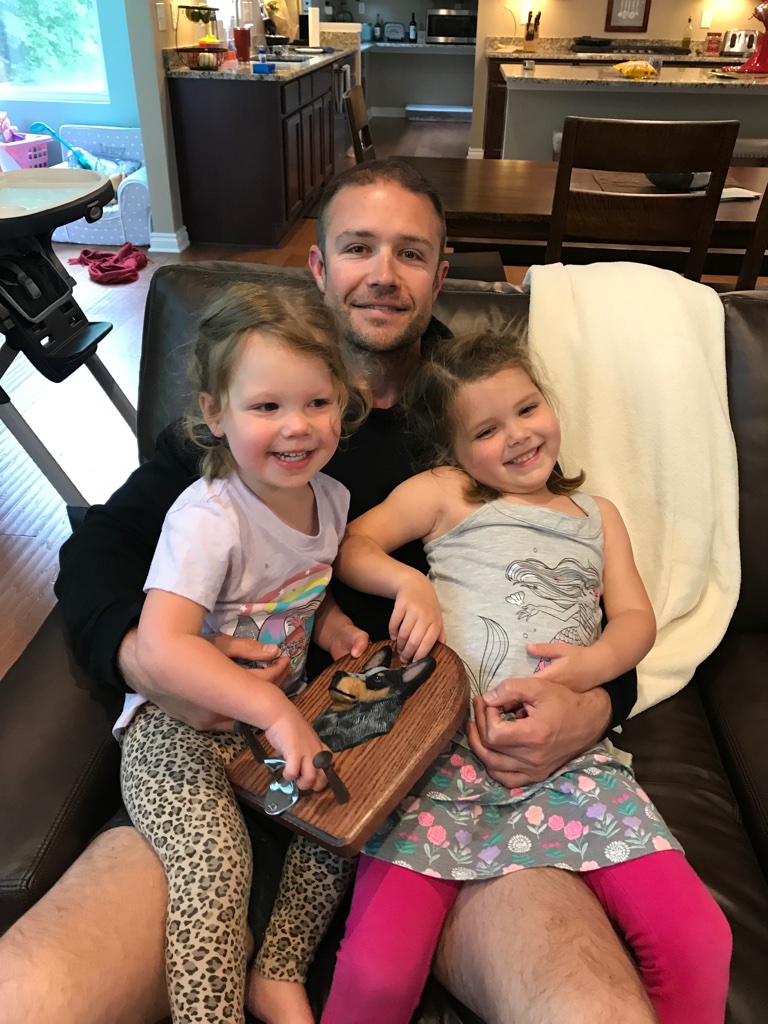 My parents came over Saturday evening to celebrate Father’s Day, and I took zero pictures! I’m not sure what I was thinking!
The girls have been giving us a run for our money lately when they play together. It usually only lasts a few minutes before there’s fighting or crying. They did give us a few good extended play times this weekend, though, so maybe they’ve turned a corner! The first play session was play doh on Saturday evening . . . 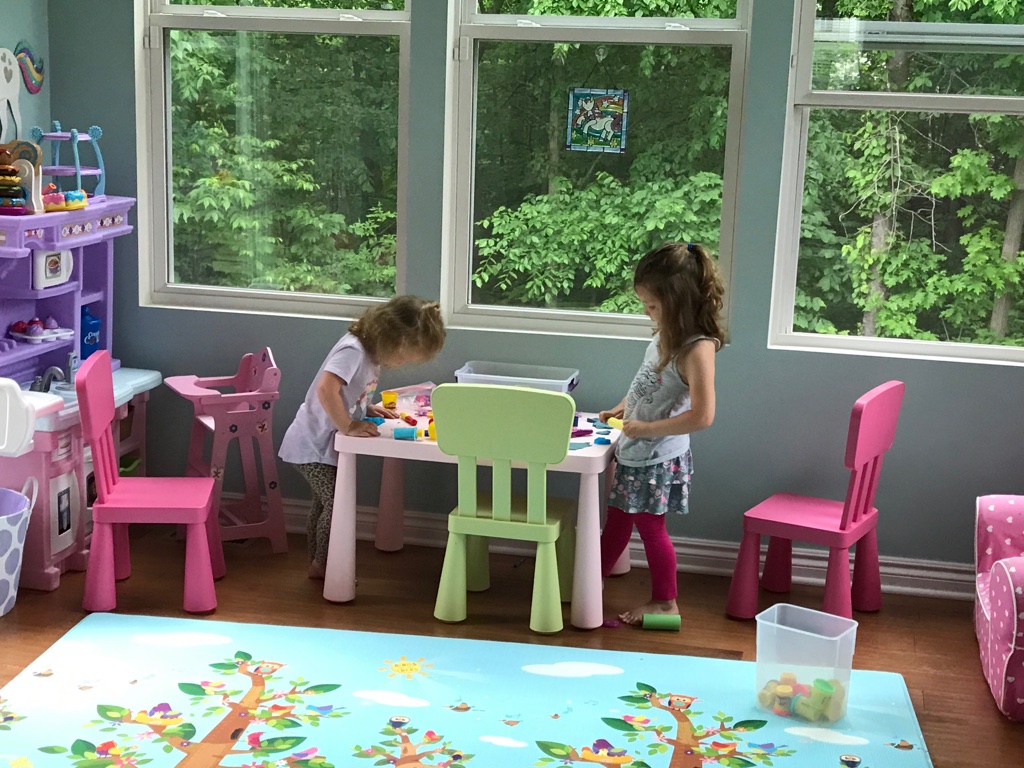 . . . and the second was pet washing on Sunday morning! They spent almost 30 minutes “washing” their stuffies and putting make up on them. It was awesome! 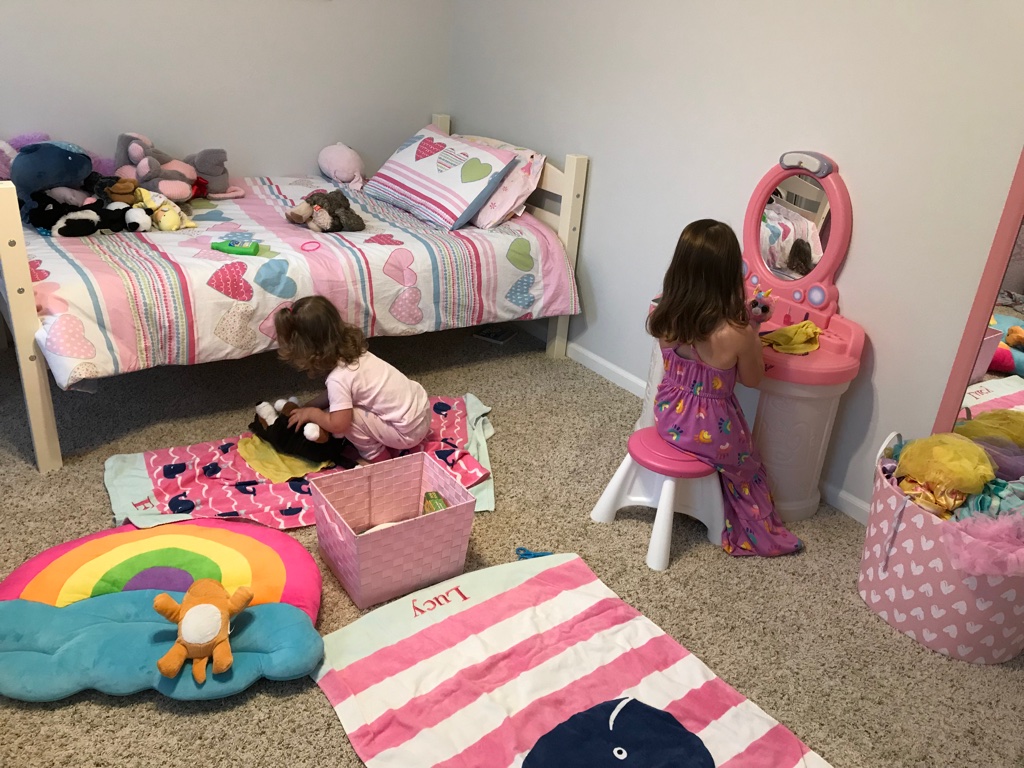 It rained most of the day on Father’s Day. Boo!!
But we got out our rain gear and took a walk later on in the morning. 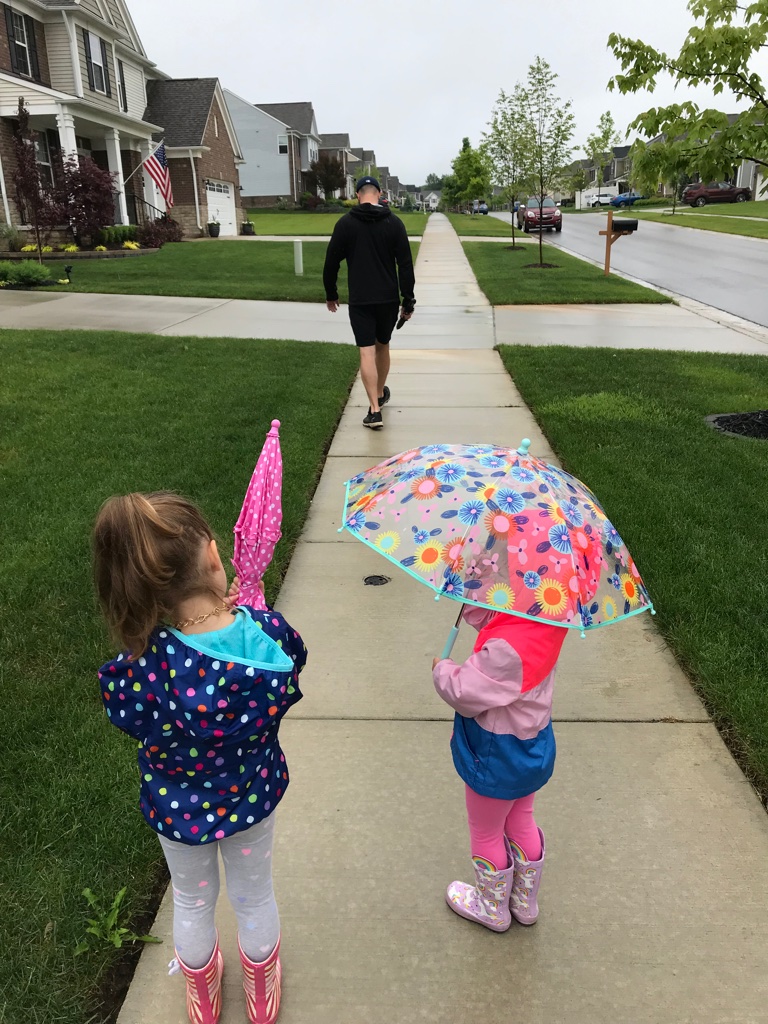 Lucy spotted a HUGE worm on the sidewalk and picked it right up. Gross! 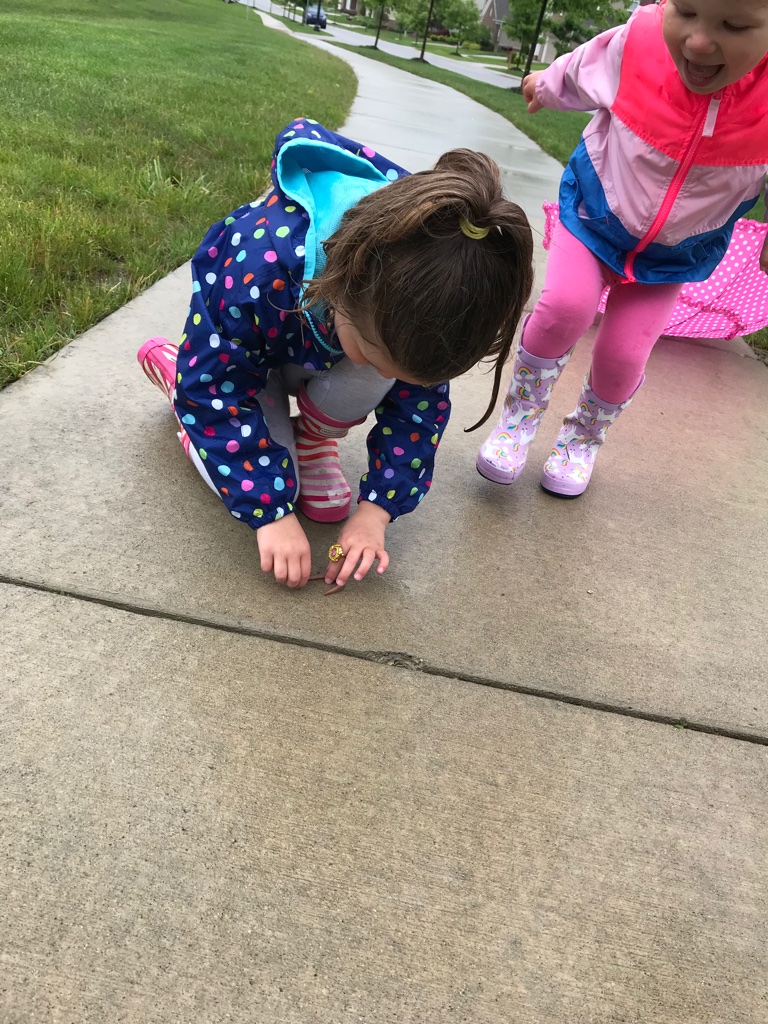 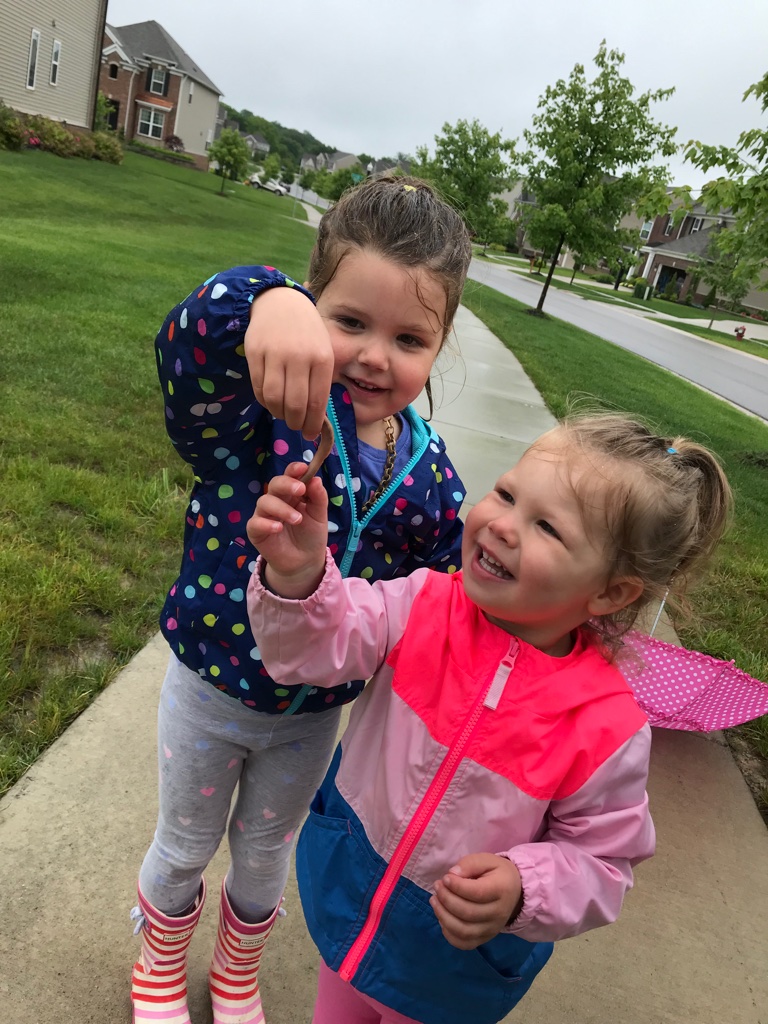 The girls had a great day pampering daddy. They made the banner while he was golfing on Saturday. 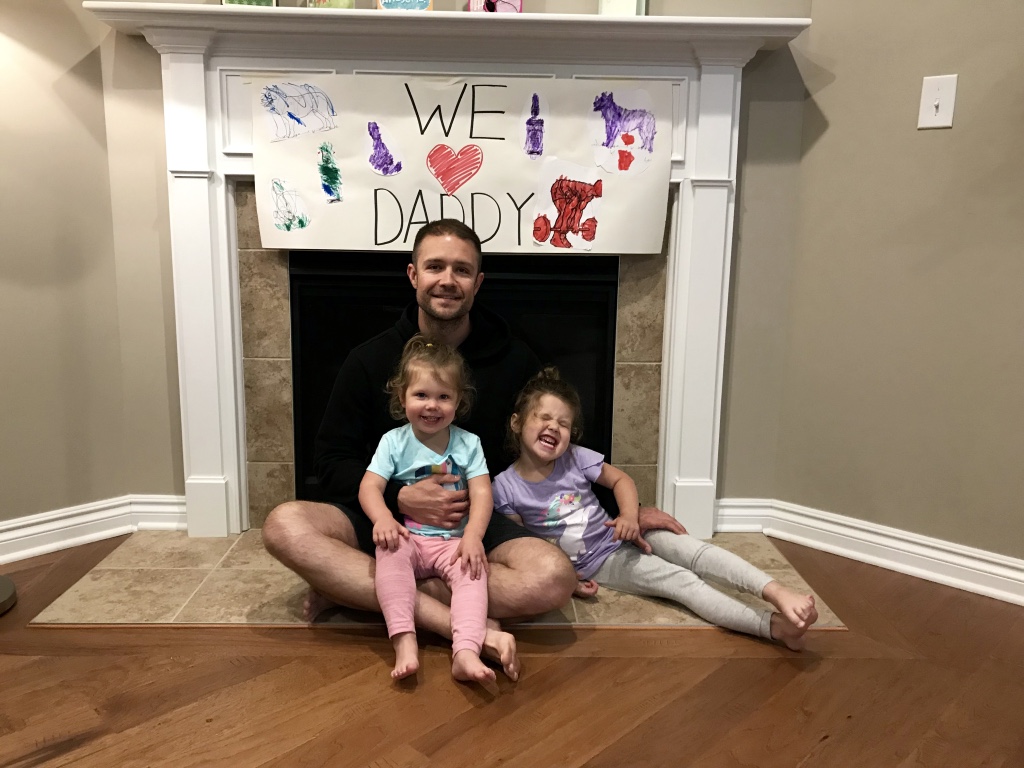 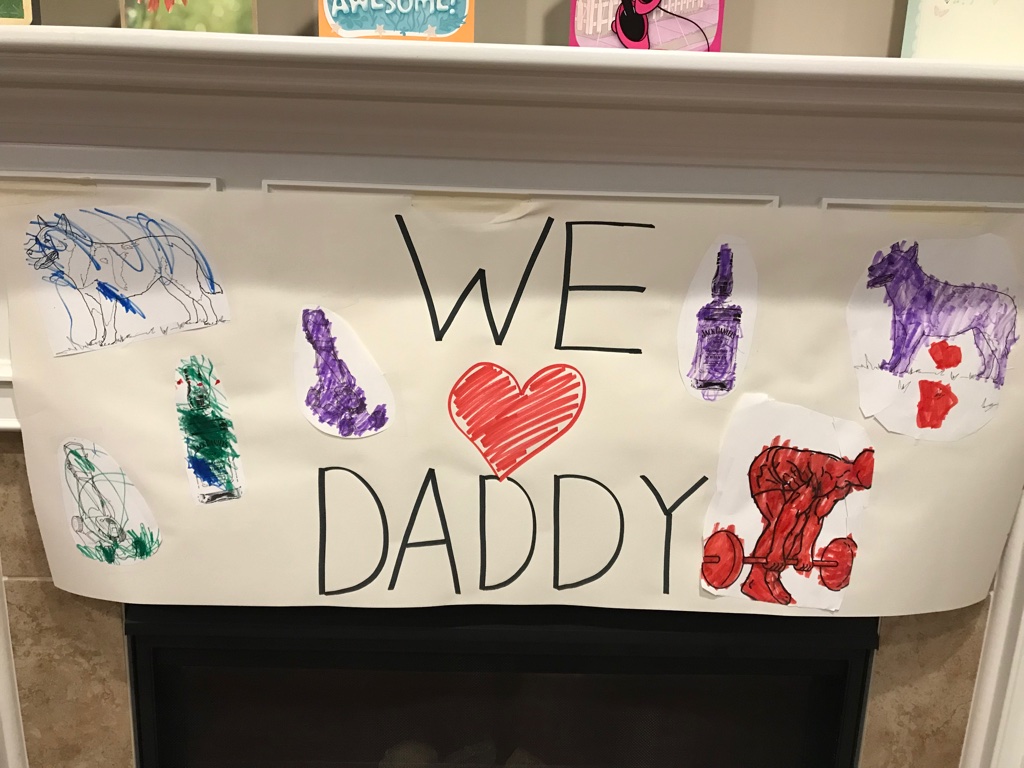 They colored pictures of lawnmowers . . . 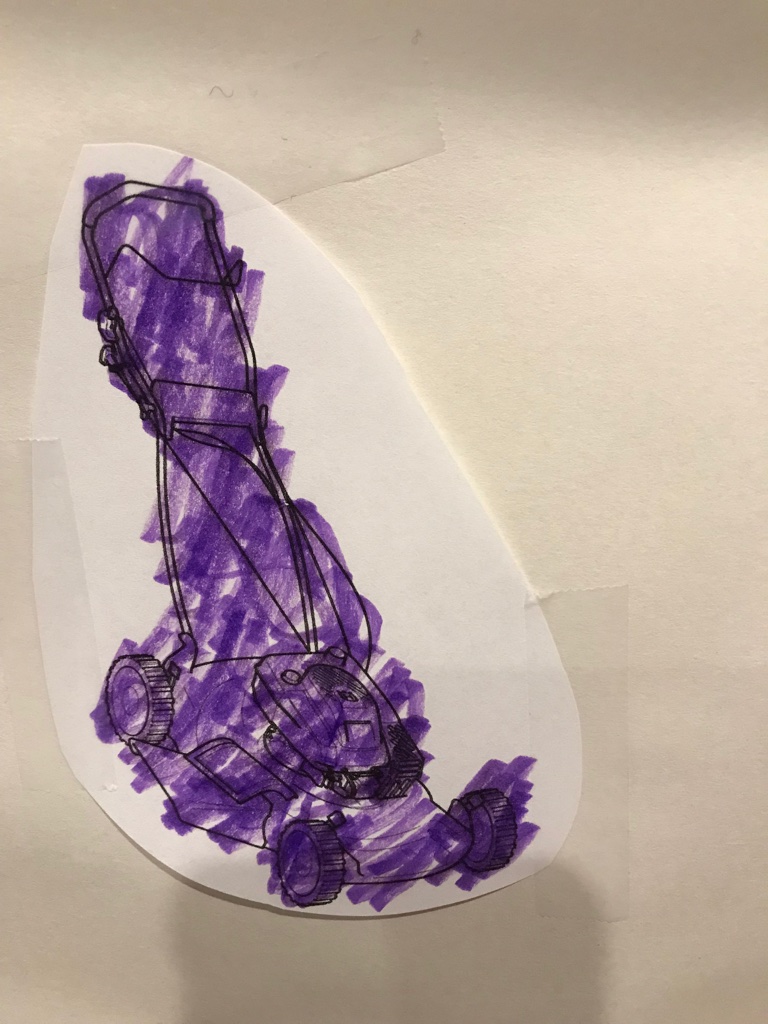 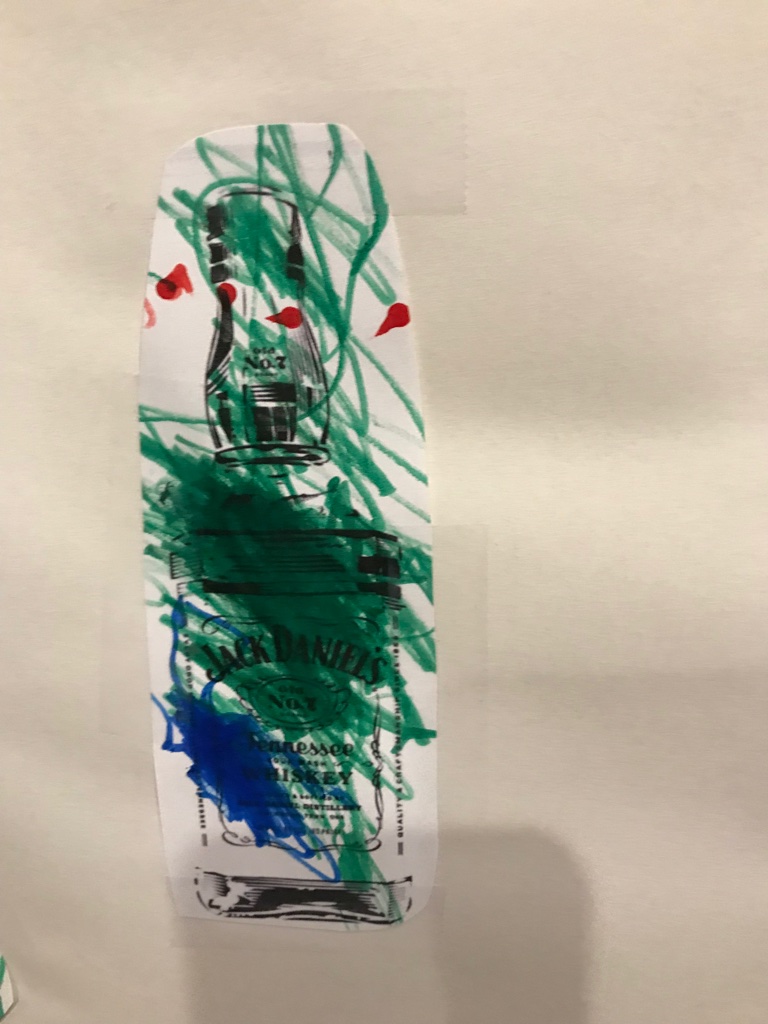 . . . cattle dogs and weight lifters.
All of his favorite things! 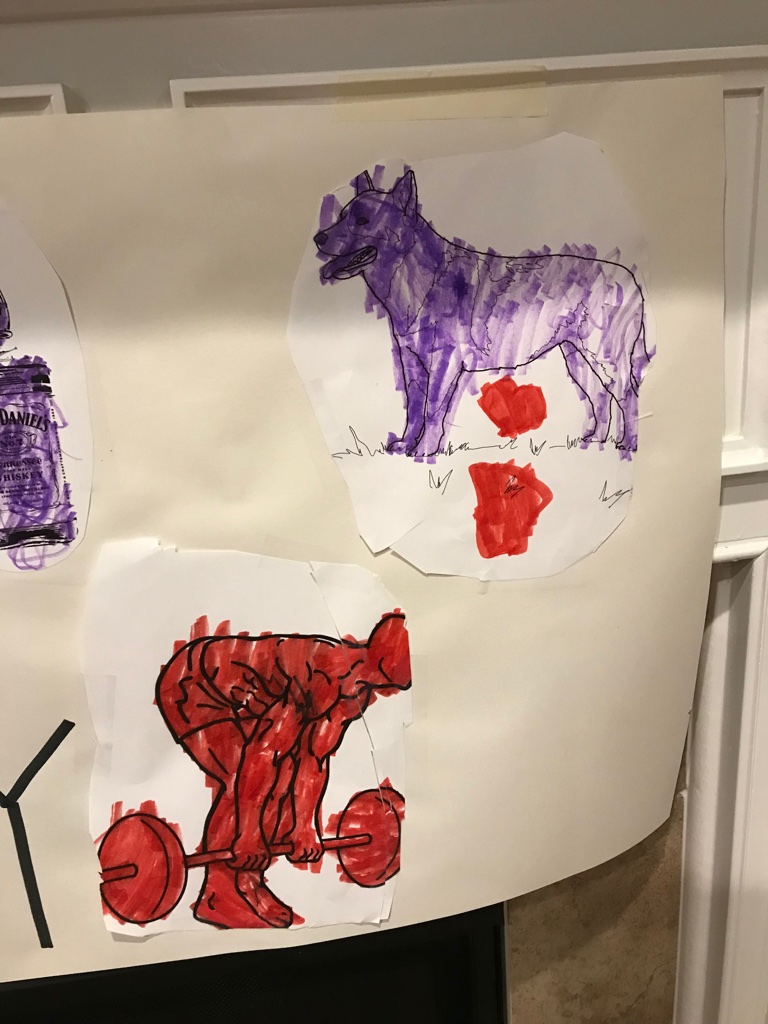 Lucy decorated the envelope of her Father’s Day card all on her own, and it melted my heart! 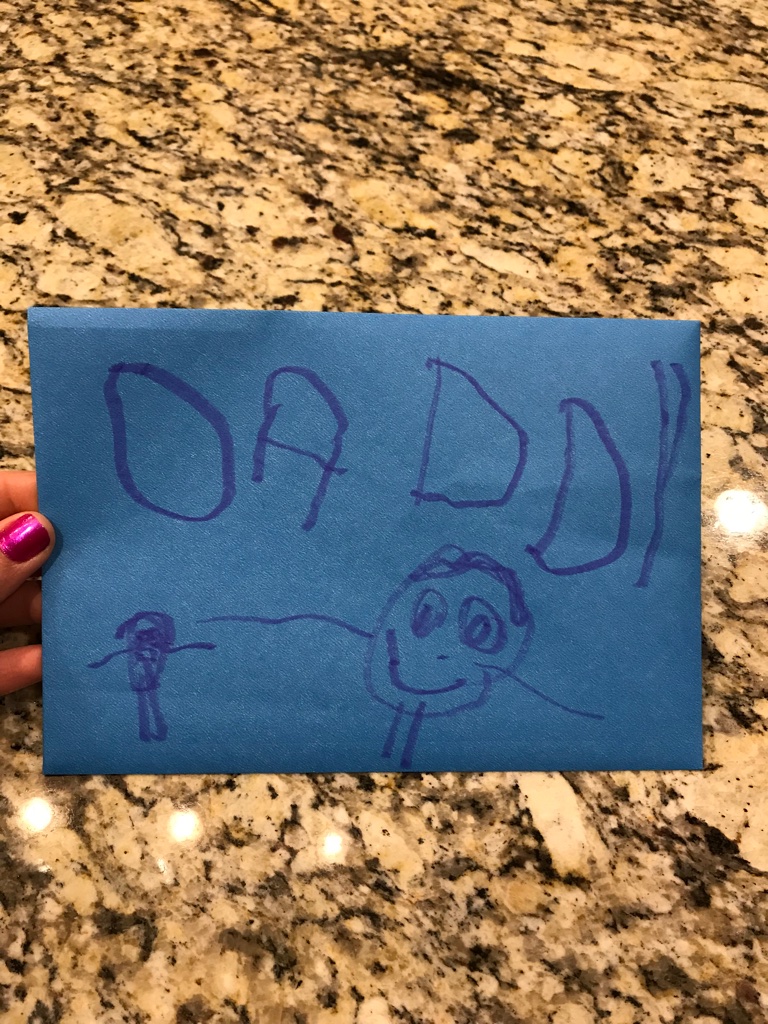 Emmy did a great job too! 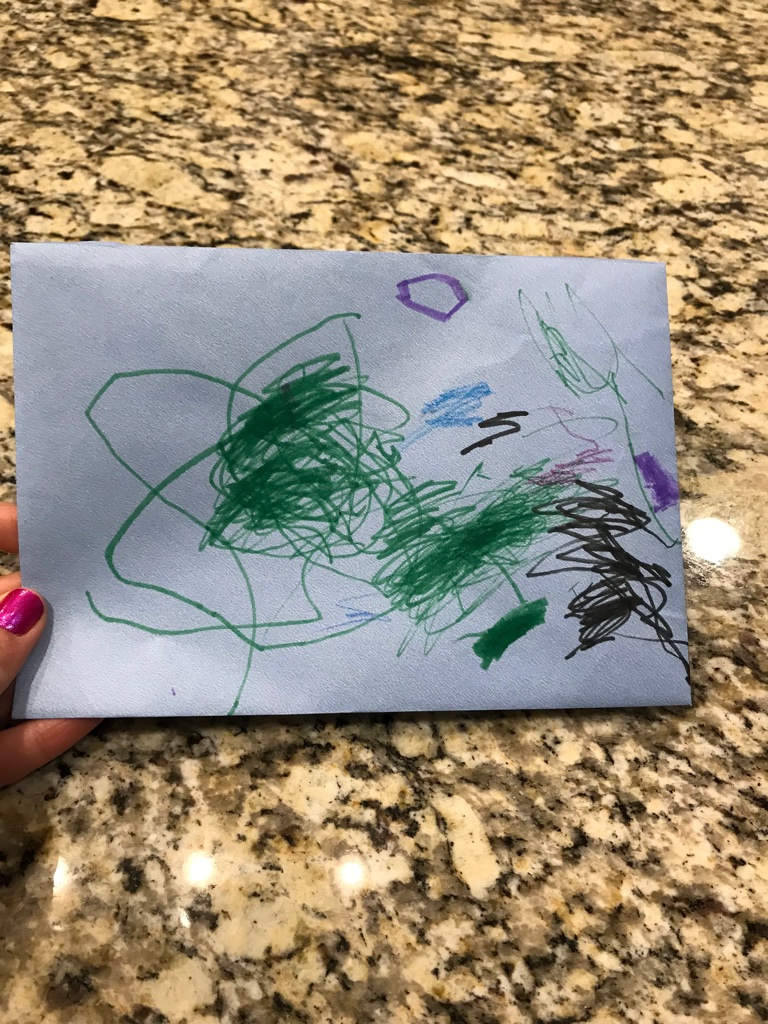 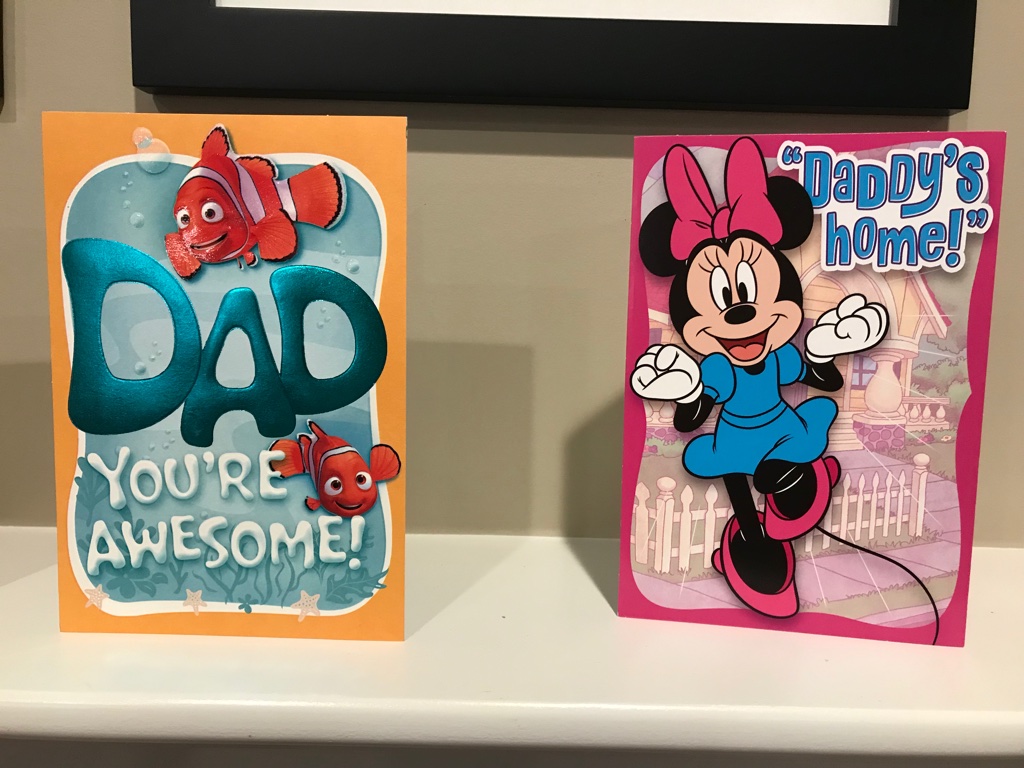 Oh, and yesterday was also our 13th anniversary!!
My how things have changed! 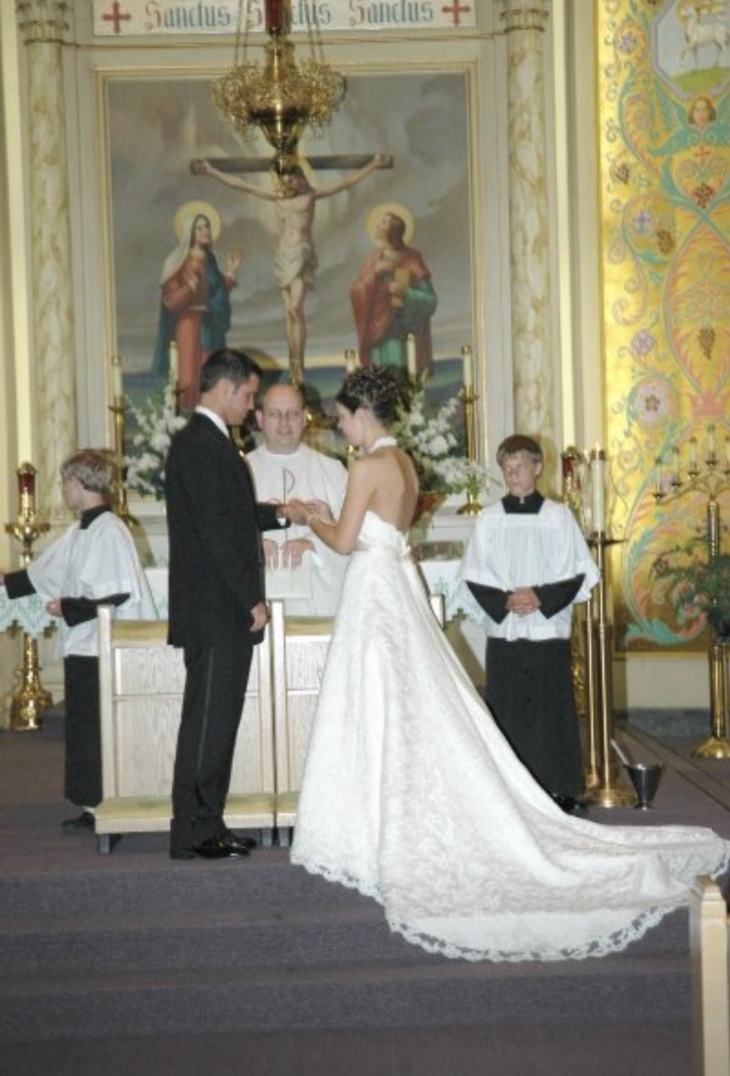 We didn’t do anything to celebrate because we have a wedding to attend next weekend and we got a hotel room, so that will serve as our night out for our anniversary.
The biggest news of this week . . . our deck is being built! Woo hoo! Finally!
I cannot wait to have a private, secured (there’s going to be a gate!) location to play outside with the girls and eat our meals.
Have a great week!
XOXO