Because if I don’t laugh/blog about it, I might just cry.
Nothing major has happened to make our week particularly trying; it’s just lots of little things that seem to be adding up.
1. Emmy’s sleep is still inconsistent, but leaning toward getting better. Two nights this week she slept through the night and I got 6.5 hours of uninterrupted sleep! Sounds great, right? Except that in a weird twist of fate the days after those two nights of good sleep were the most tired I’ve felt in a long time! Like, put on a movie for the girls in the middle of the morning because I must lie down kind of tired! It’s like my body no longer knows how to feel when it sleeps all night long or something. She woke me up four times on Tuesday night, so we’re not out of the sleep regression woods yet.
2. Four year olds are frustrating, and I need to actively remind myself fifty (a hundred? TWO hundred?!) times a day to take a deep breath, relax, and don’t engage in her mind games/big sister war fare. I start out real strong in the morning, but by 4:00/4:30 my patience is running a bit thin. Which brings us to number three . . .
3. Lucy peed all over the hallway/bathroom floor the other afternoon, and despite my best effort not to, I lost my ever loving mind. I’m not proud of it, but I will own up to it. What is so hard about going to the bathroom, that’s what I want to know?! I’ve gotten it down to like 8 seconds flat, no joke. #momlife
But it’s the end of the world to Lucy. I asked her several times to go potty before we went outside, and she insisted she didn’t have to go. While we were playing, I noticed her getting fidgety and asked if she had to go. She said no, but I suggested we go in and try anyway. Crying ensued. Then, like 3 minutes later Lucy had to go RIGHT NOW and insisted she needed my help. So by the time I got a (now crying) Emmy to leave the game they were all playing across the street, it was too long and Lucy peed all over the hallway floor on her way to the bathroom. I think what makes my blood boil the most is that she doesn’t care and isn’t apologetic about it. She’s four, I’m 37 . . . I know. But it was the straw that broke this mama camel’s back!
And then I get mad at myself for getting mad at her, and want to stuff a cookie in my mouth. Why can’t I be the kind of person who gets mad and wants to do ten push ups?
Anyway, we did have a few successes this week.
Lucy had her four year check up on Monday. She wasn’t happy about having to get two shots, but she didn’t cry either! She handled the check up, vision, and hearing tests like a champ! 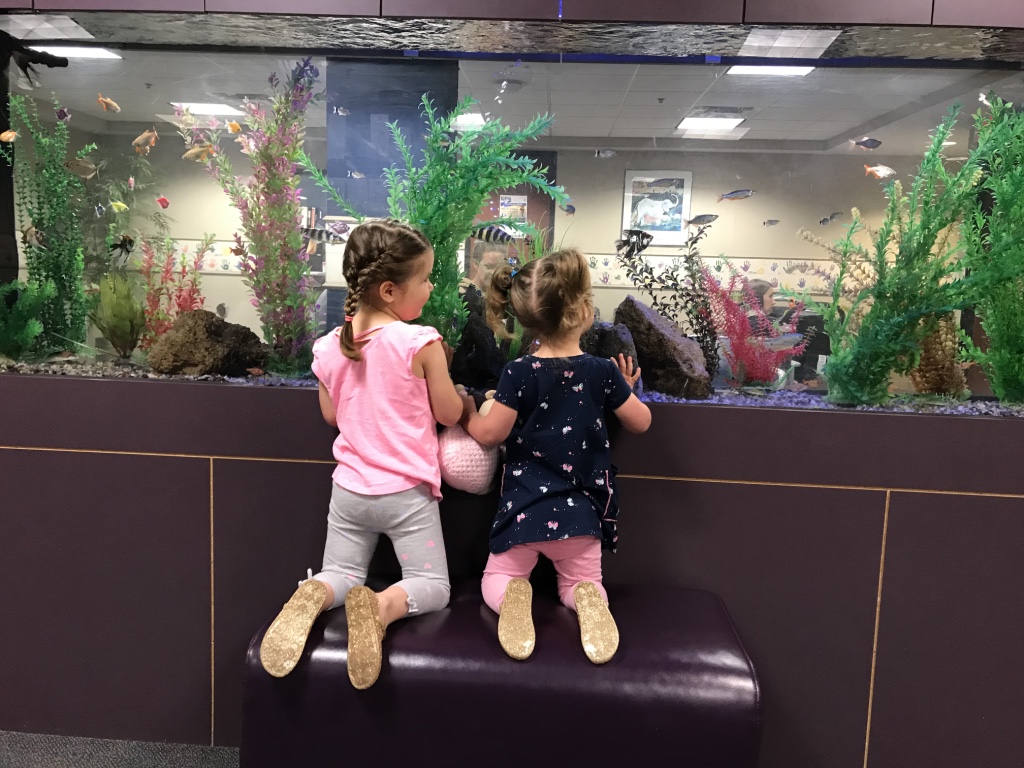 I made it very clear to Emmy on the car ride to the doctor that this visit was for LUCY ONLY. She must have finally understood because she was happy and chatting with the doctor and her nurse, who were both so happy to see that Emmy has another personality besides a screaming maniac! 😉 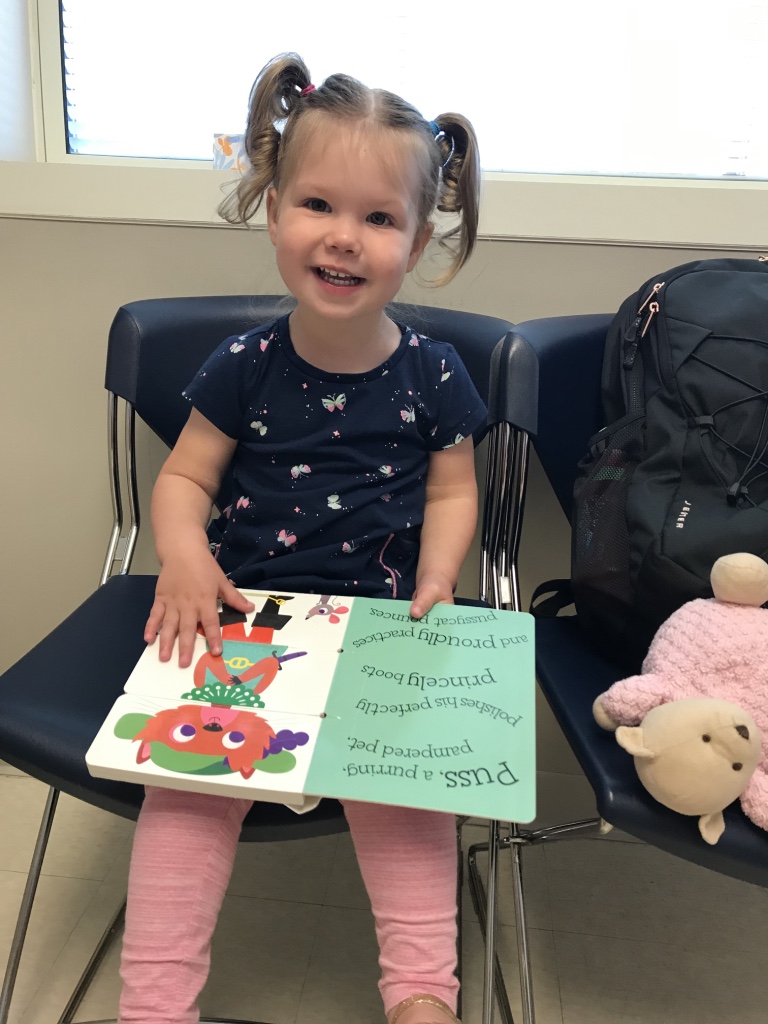 Monday was a beautiful day so we packed lunch and headed to the park with my parents after Lucy’s appointment. There was lots of swinging . . . 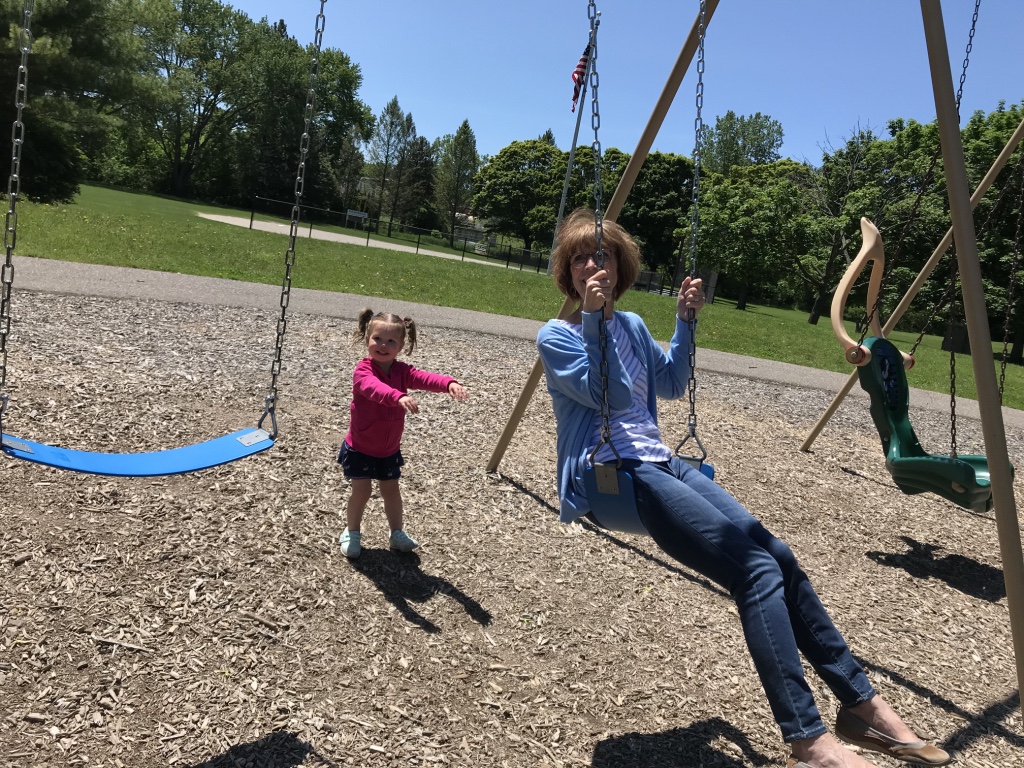 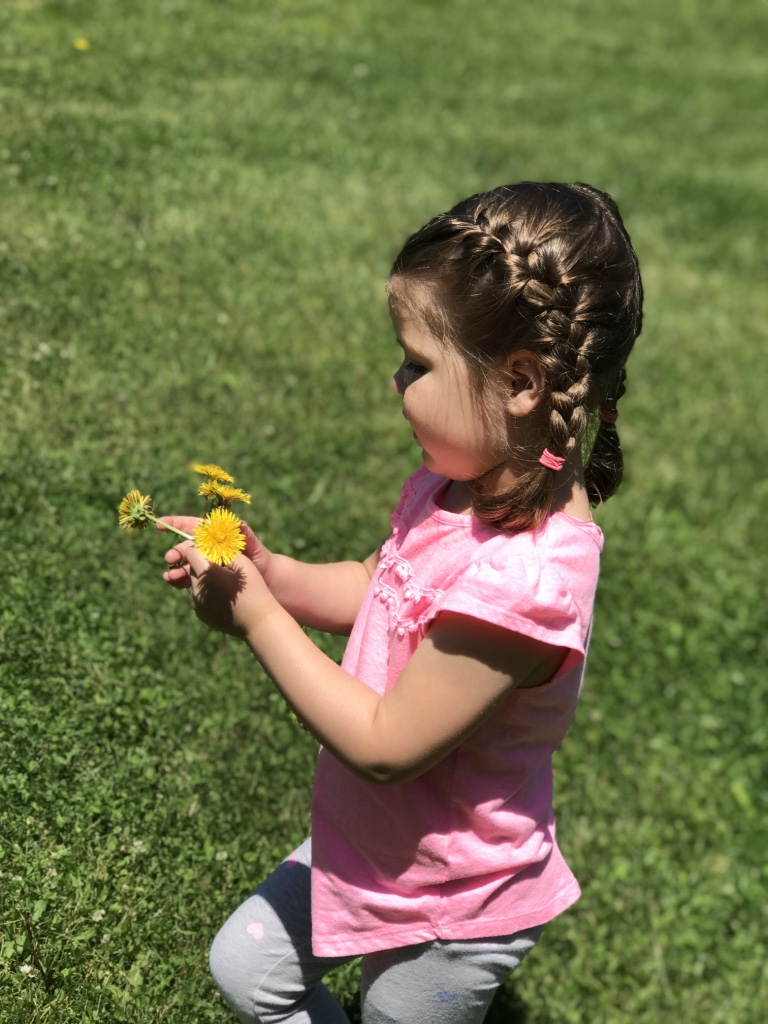 I was so proud of Lucy for doing such a great job at the doctor that I decided to make cookies with her and let her do most of the steps herself. My kitchen had seen better days, but Lucy was happy as a clam to get to do it all. 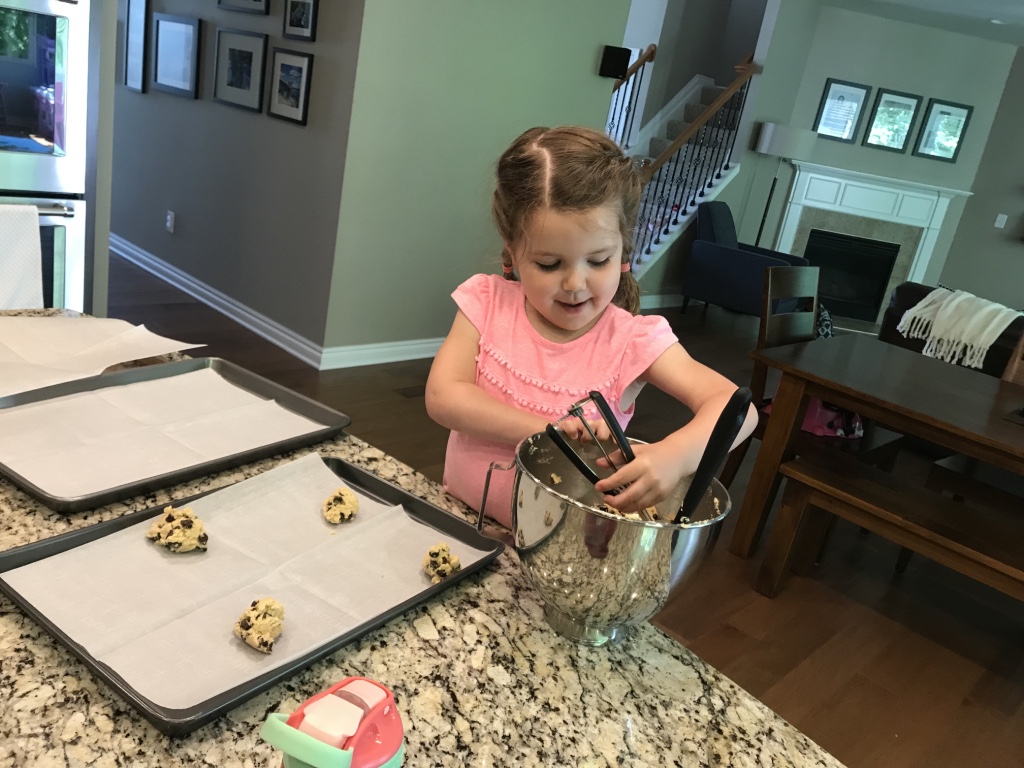 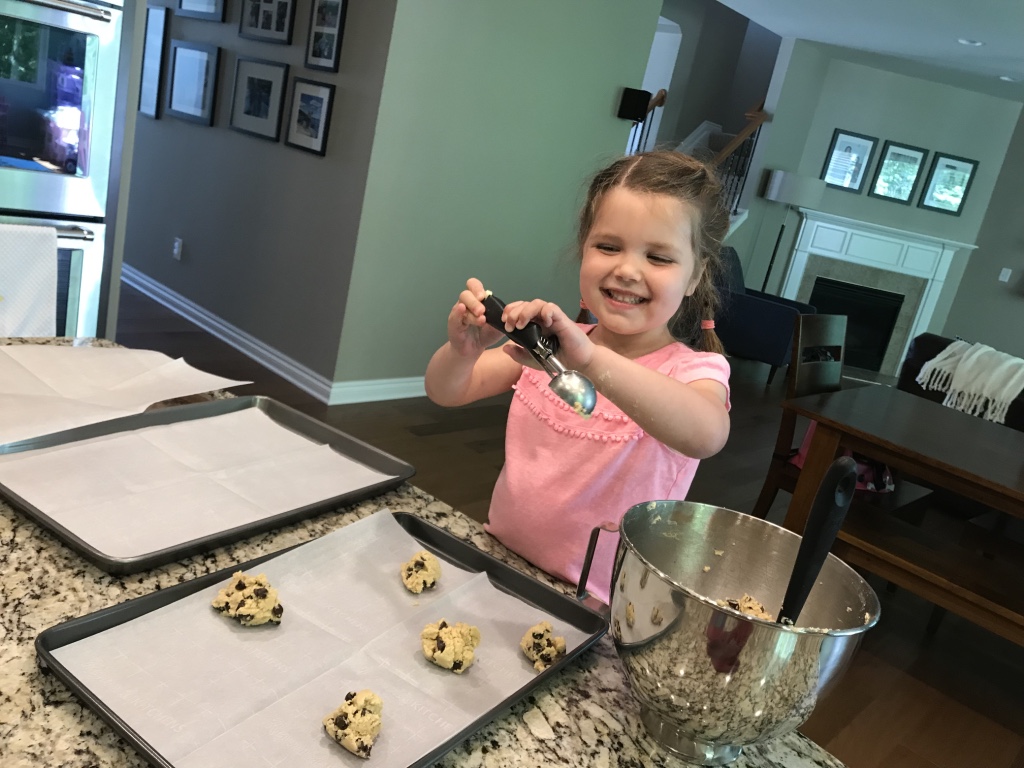 We had a friends over on Tuesday and walked to the playground to burn off some energy. And eat snacks. 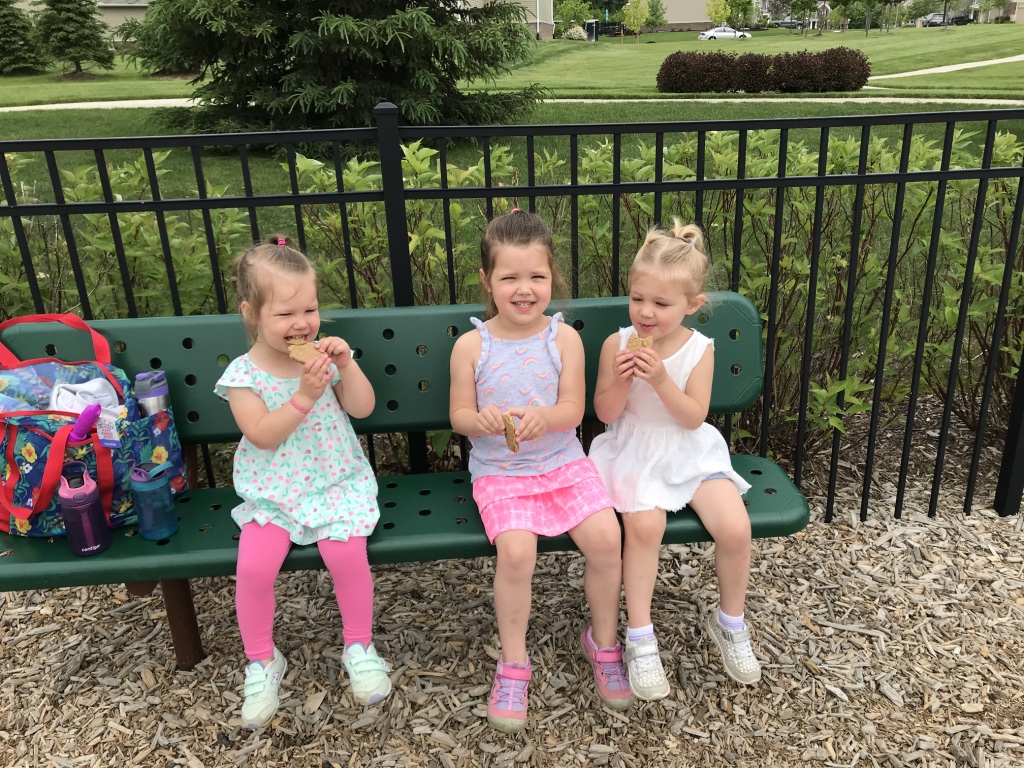 These girls are starting gymnastics in July, and they are looking super cute thanks to my friend Marie’s mom! She used to own a gym and so thoughtfully gave the girls some leotards she still had on hand. 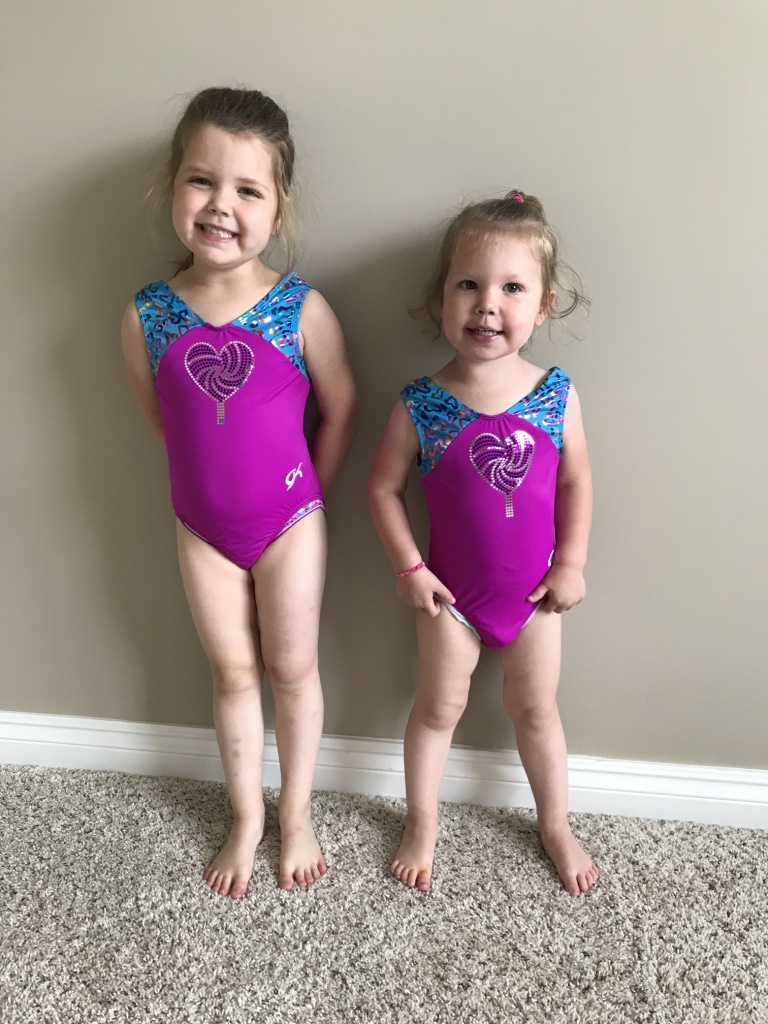 Tuesday is Matty’s golf night, and it also happened to be the day that Emily decided not to nap. 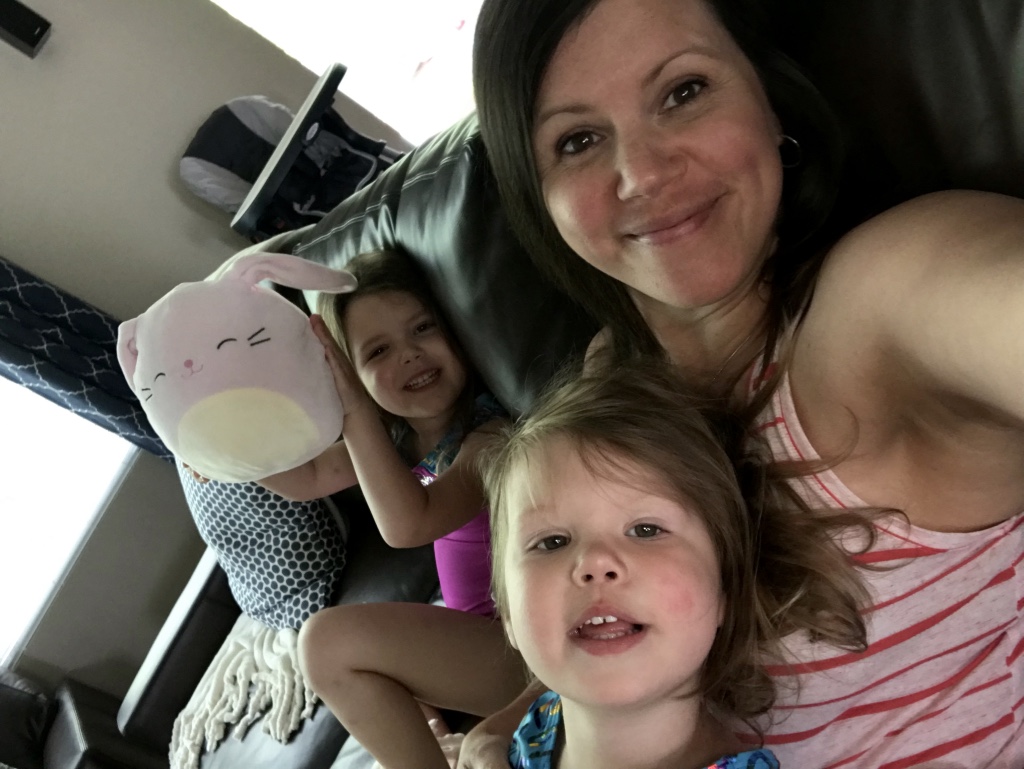 I must have lost my mind because I decided a crazy tiring day without a nap time seemed like a good day to take the girls out to dinner by myself. They did a great job at Panera, though! 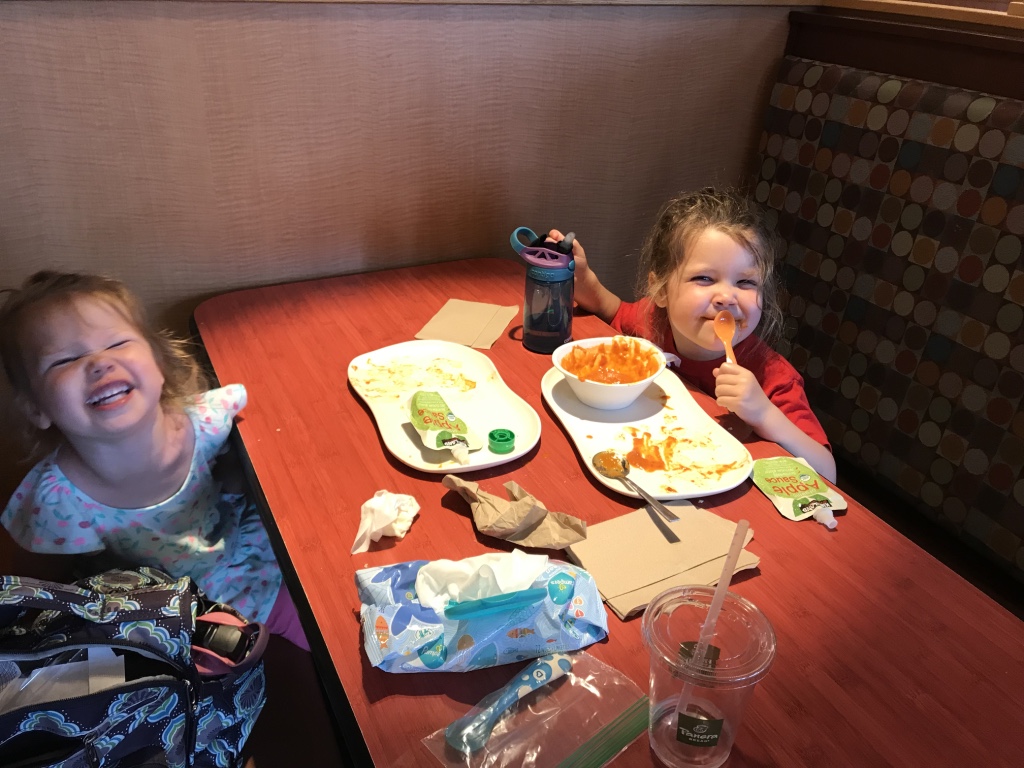 Yesterday we had a play date at Funtastic, and Lucy was the best big sister ever! She kept encouraging Emmy to climb up the jungle gym with her and go down the slide. It was so sweet, and I wish they played that well together more often. 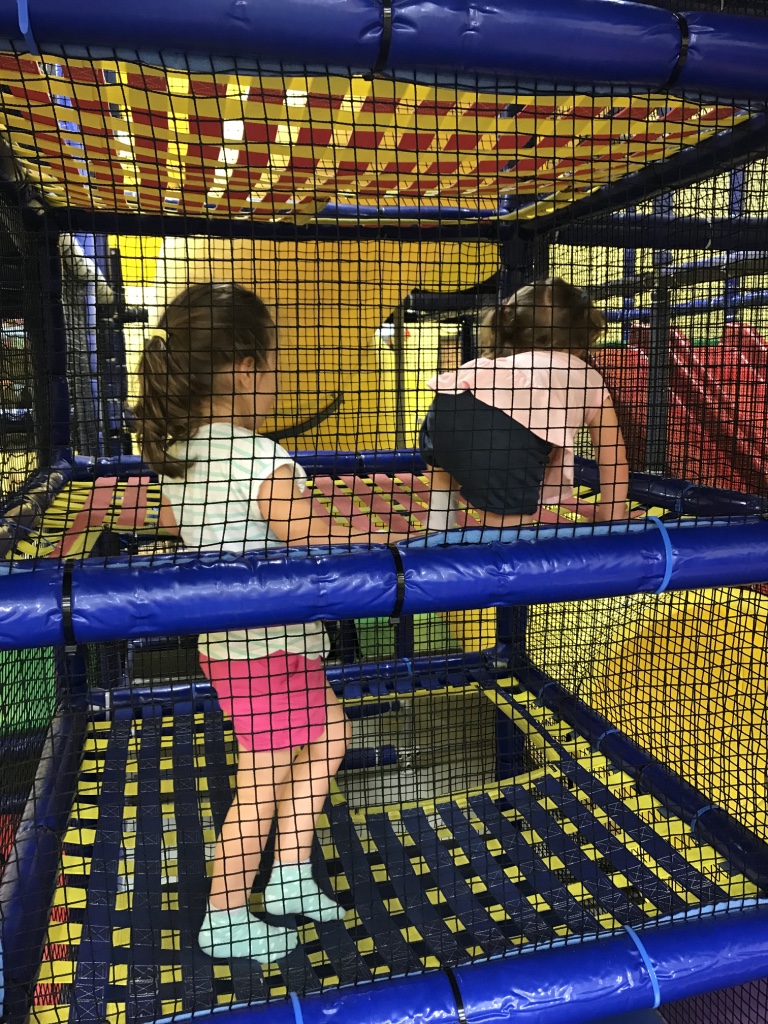 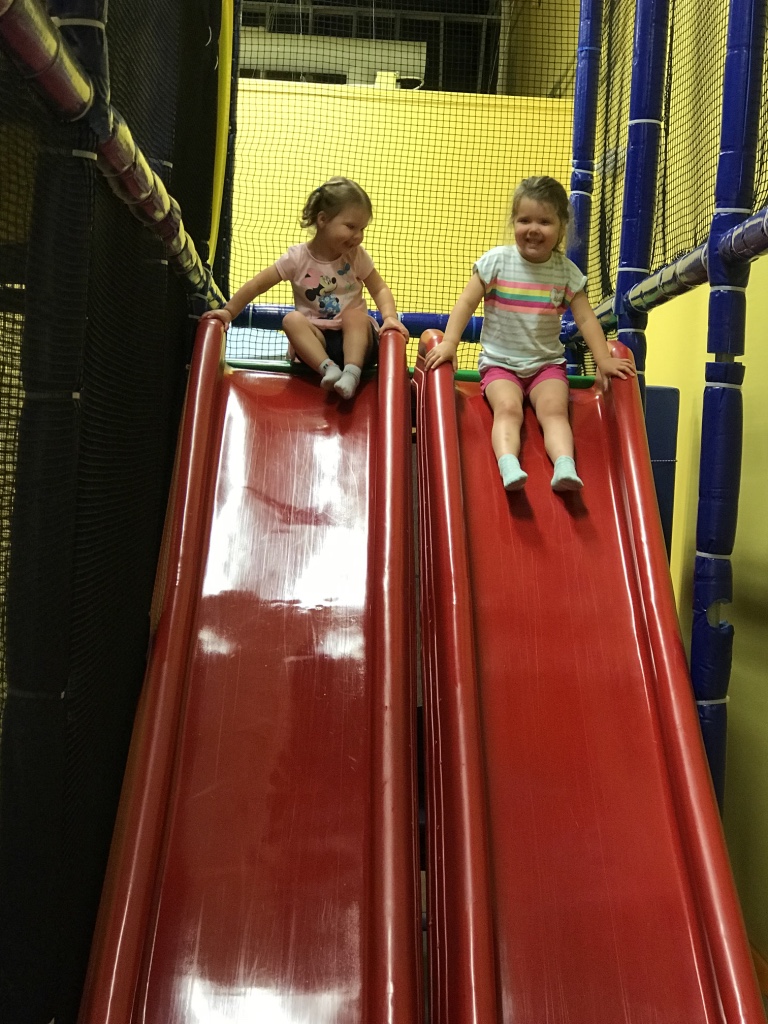 Last night I went out to dinner with some friends, and it was so nice to get out for a bit. Margaritas, chips and guacamole, and friends make even the craziest weeks better!
We have a pretty low key weekend ahead of us which is fine by me.
Here’s hoping for good weather, pool time, and naps for everyone!
Have a great weekend!
XOXO