Happy Monday!
I’m playing catch up a bit today since my computer wasn’t working one night last week.
I took the girls to our neighborhood park last week, and we were the only ones there. 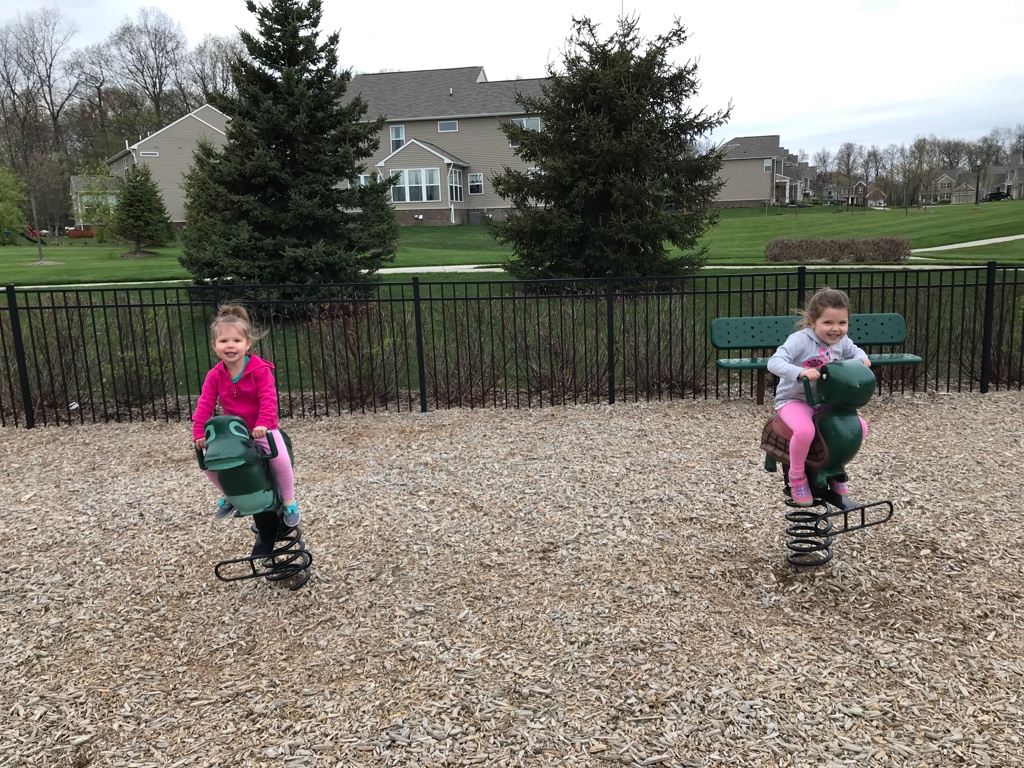 This is me SITTING on the bench while the girls played together for like ten minutes. It was glorious! 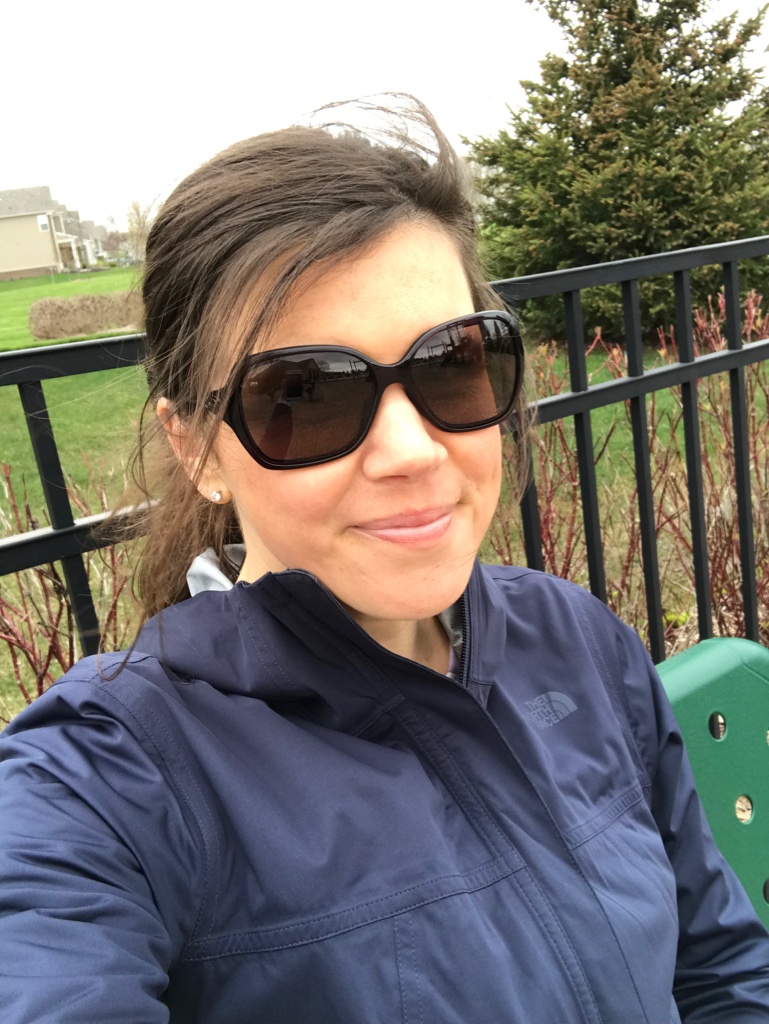 When they’re the only ones at the park I let them climb up the slide, and they had a blast! #coolmommy 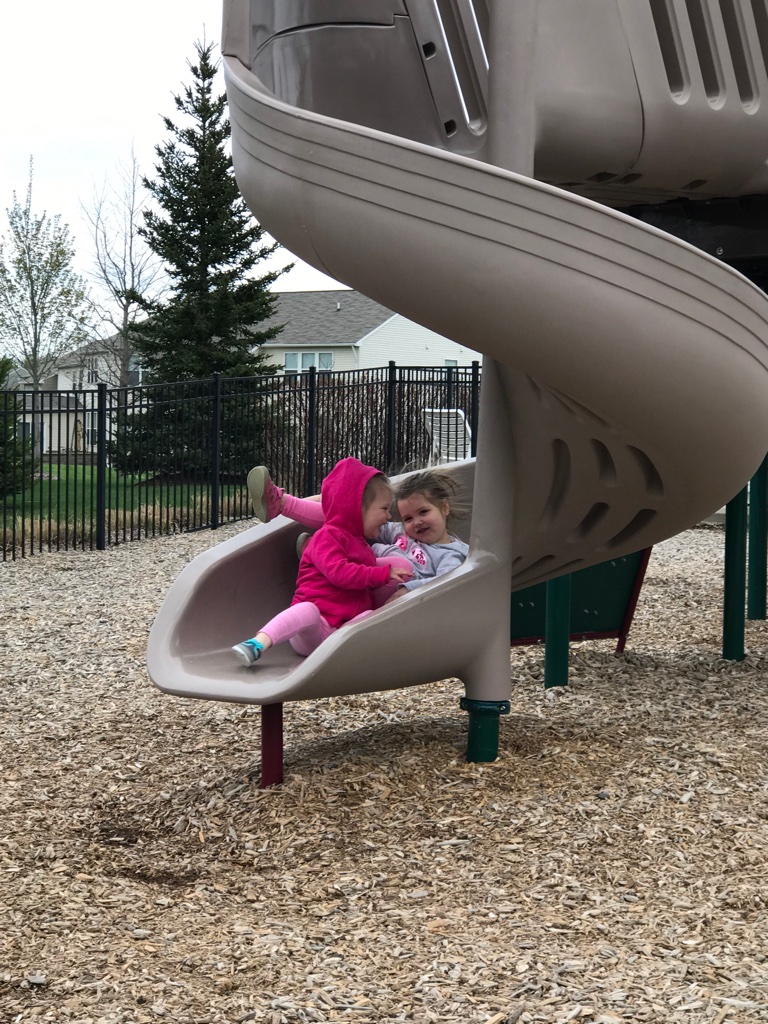 It was rainy but warm on Thursday, so the girls and our neighbor put on their rain gear and got playing! 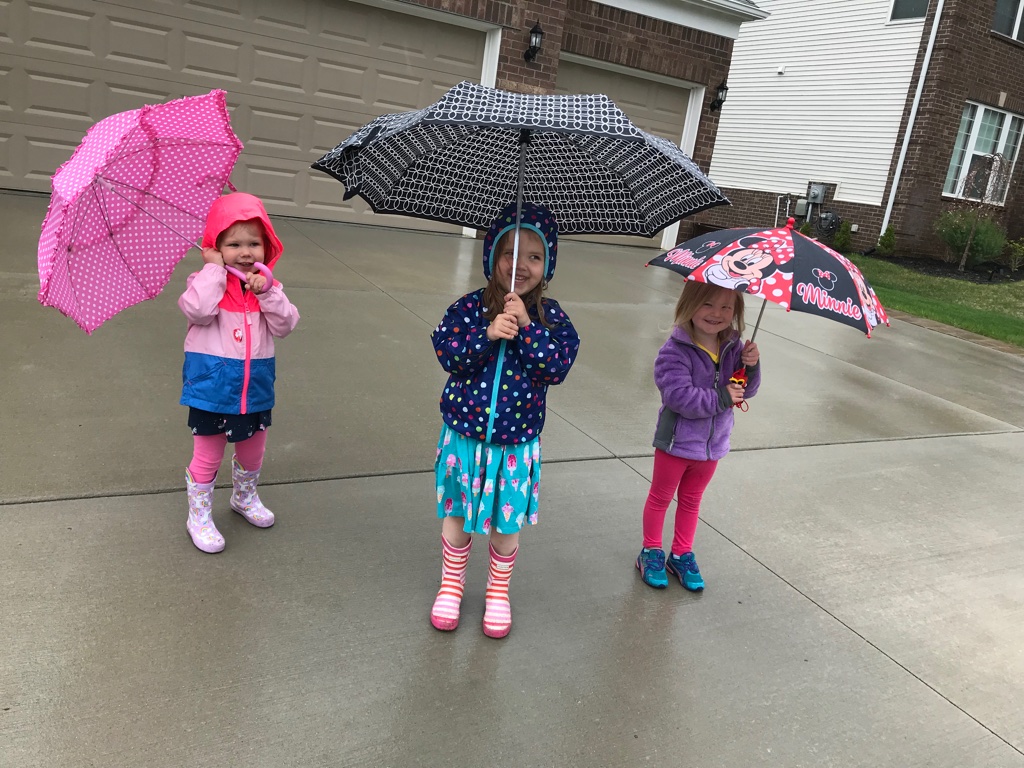 Confession: blogging has been a chore for me lately and I’ve considered taking a break. I think it’s because my nights are now spent listening to Emmy scream from her crib, so it’s hard to focus on what I’m trying to type and to feel happy about it! Her Mother’s Day gift to me is to yell, “Mommy, I love you! Please rock me, just for a minute mommy!” amongst other things over and over again. And believe me, four weeks ago I tried rocking her a bit but it doesn’t work . . . it’s never enough and she loses her mind no matter when I try to put her down.
It’s also carrying over into our daytime hours. If I’m not holding her, she’s mad. If the slightest thing bothers her, she loses her mind. I know this sounds bad, but I almost wish that she was sick or something to explain this crazy, never ending behavior! Four weeks is a long time for this to be going on. As you can see from the look on Lucy’s face, she’s had enough of it too!
(Don’t worry, nothing major happened here. She wanted ME to stand in the tower with her instead of Lucy and got mad when I said I couldn’t. Sigh.) 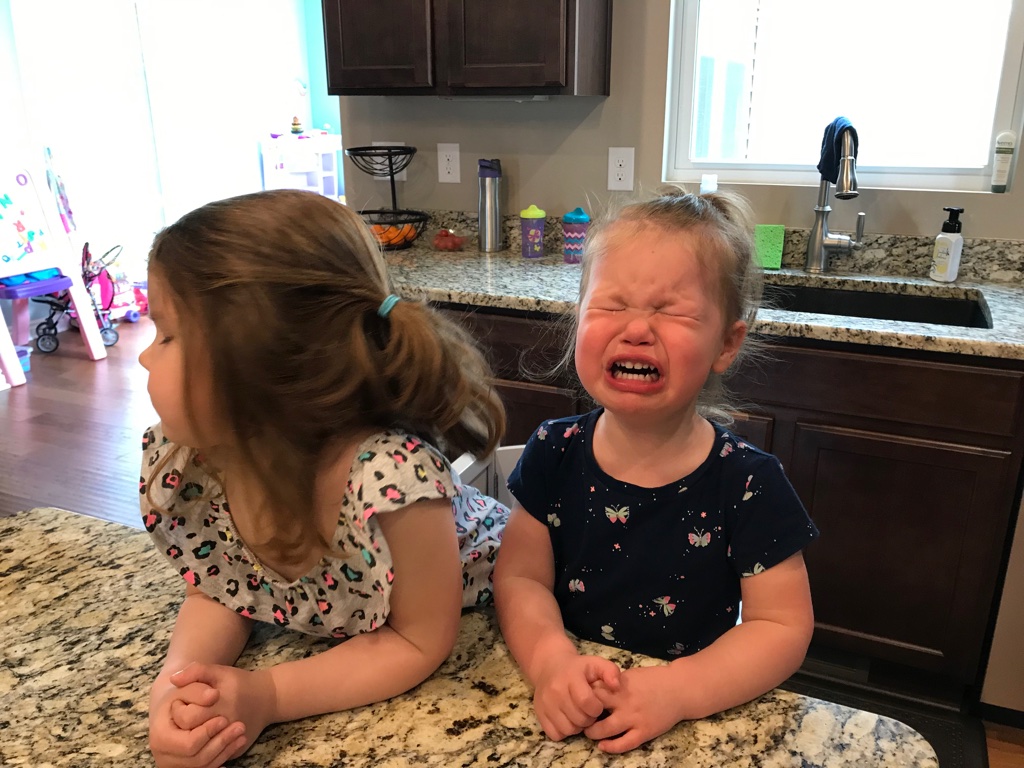 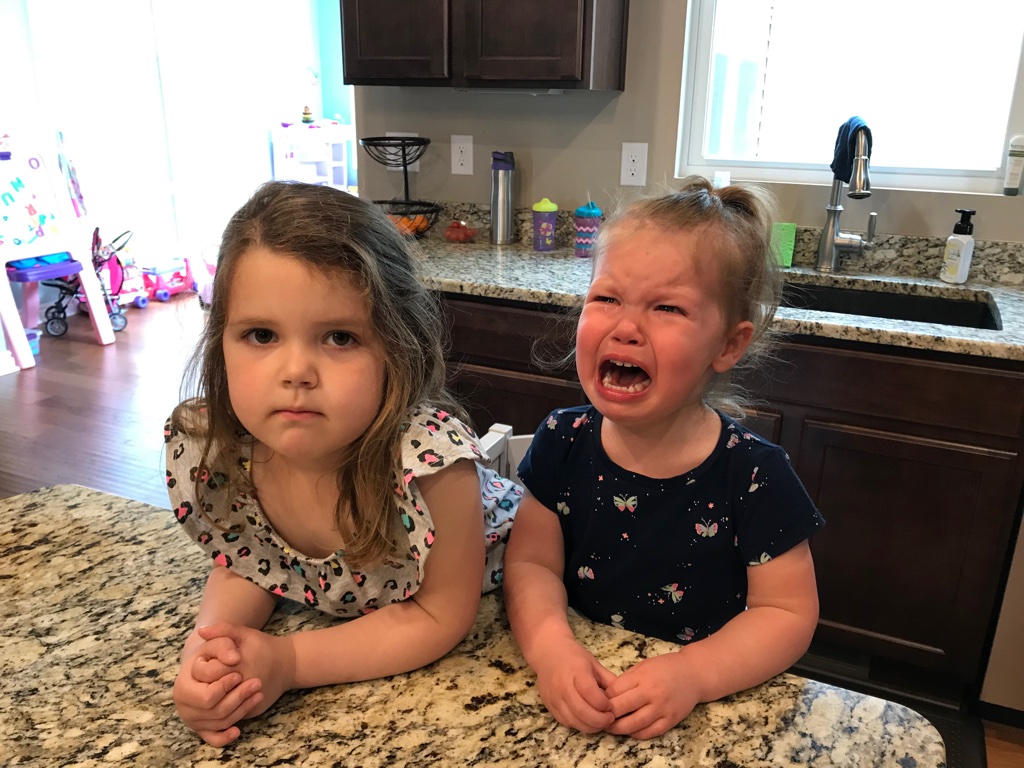 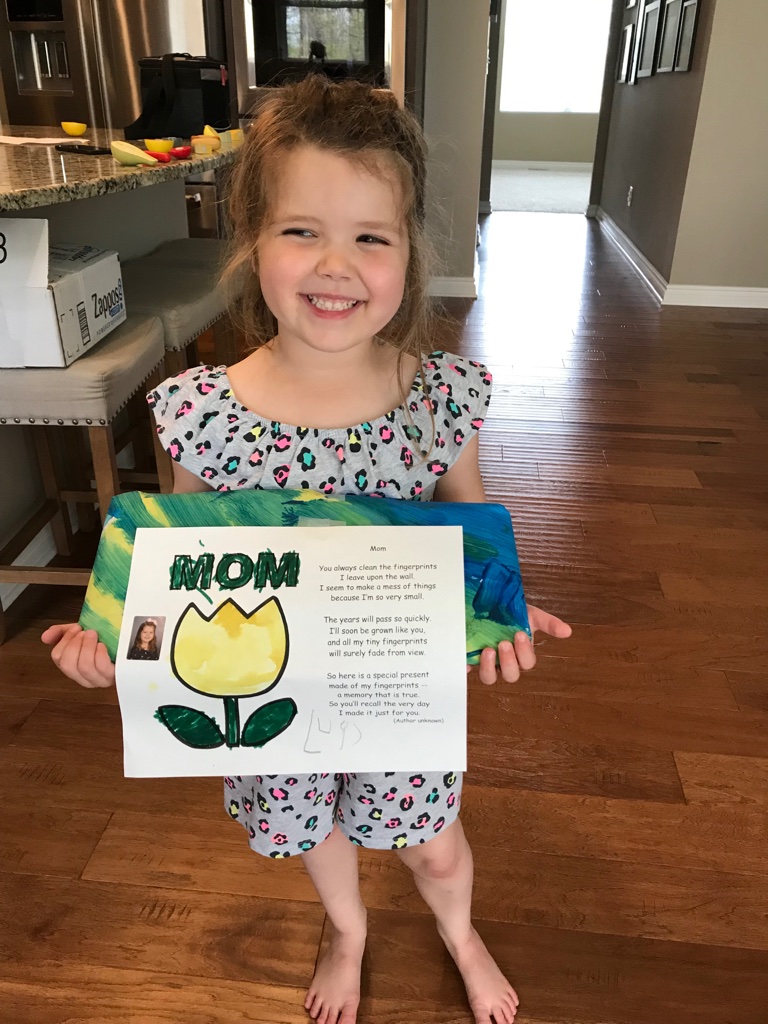 . . . and a kitchen towel with her handprints on it! 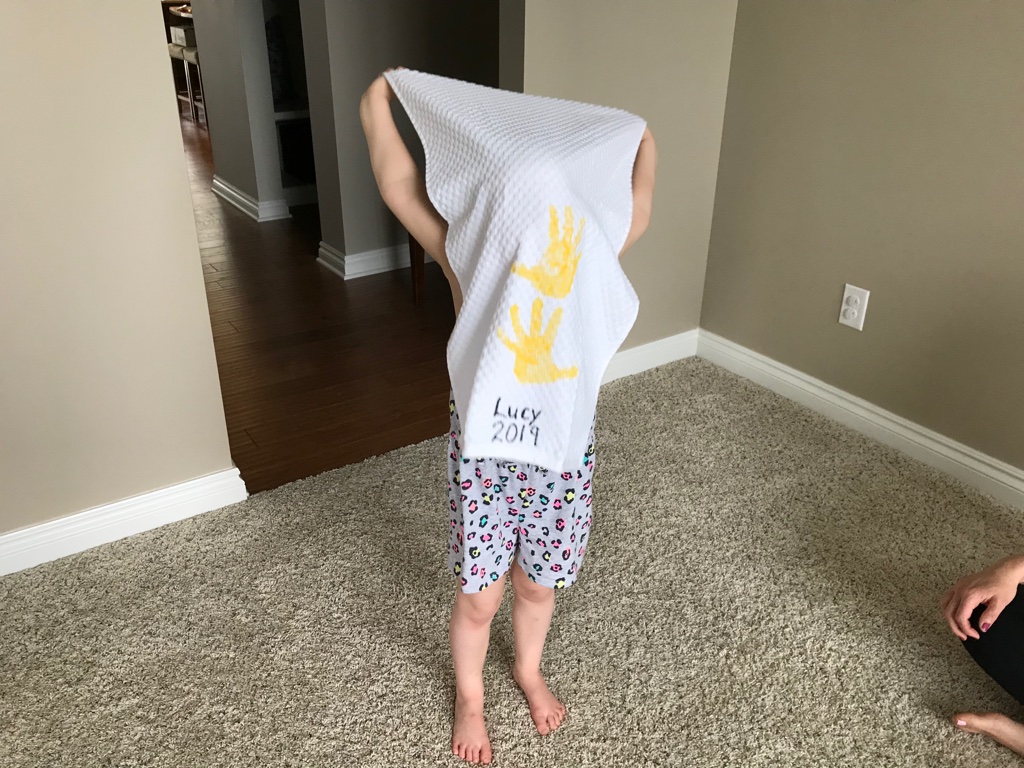 On Friday morning a bunch of us got together at Sky Zone for a playdate in honor of Lucy’s birthday. 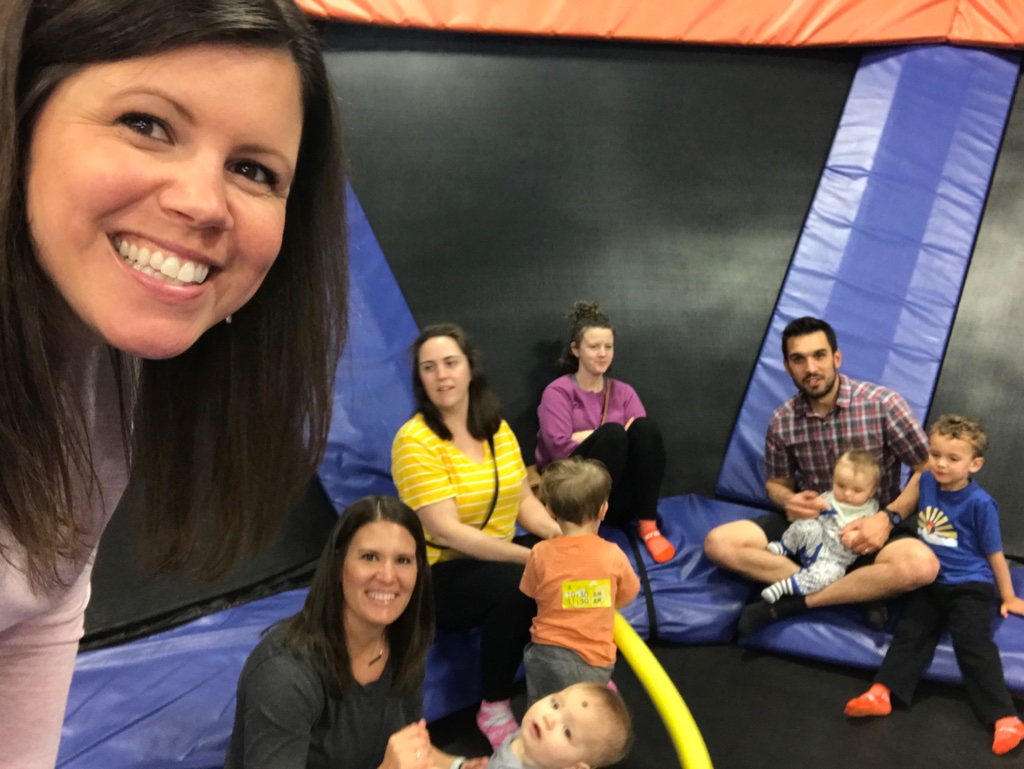 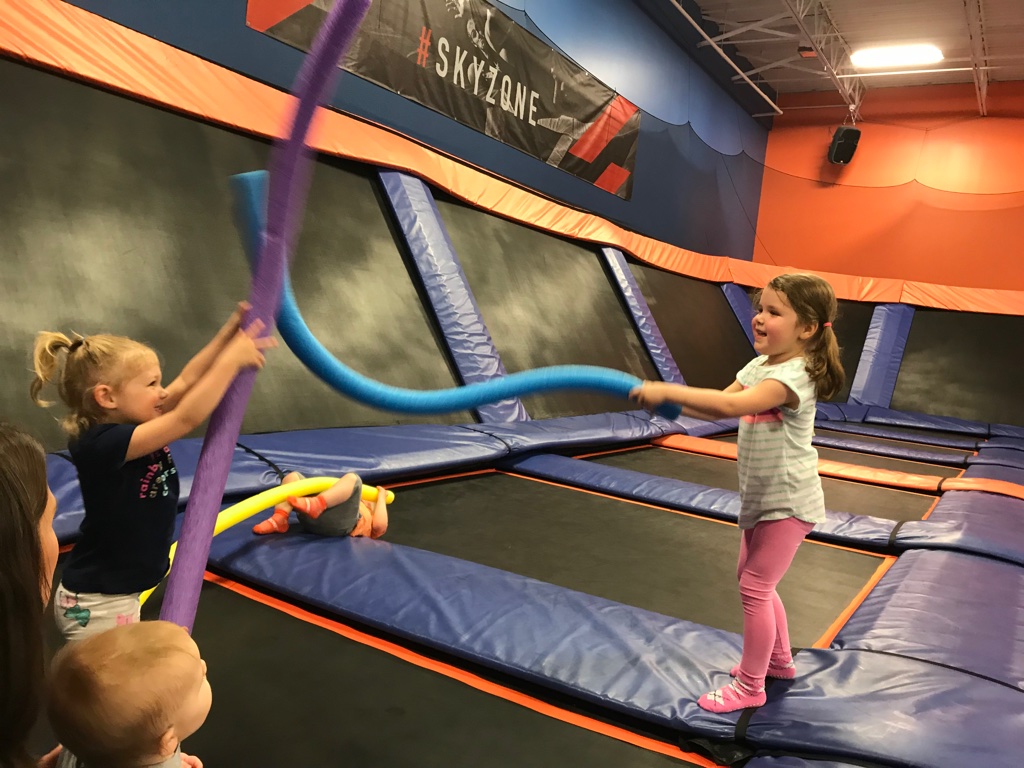 The brownies were a hit! 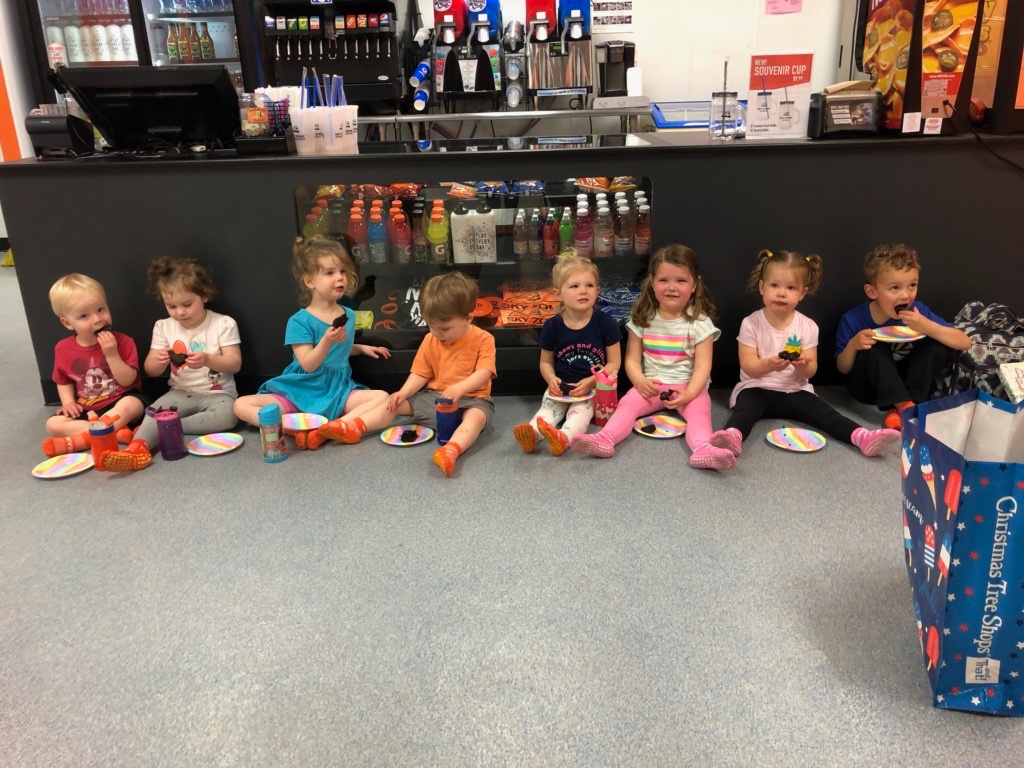 And then on Saturday we had a family party for Lucy! Her birthday isn’t until Wednesday, but it’s too hard to get everyone together during the week. This little lady was ready to celebrate turning four . . . flamingo style! 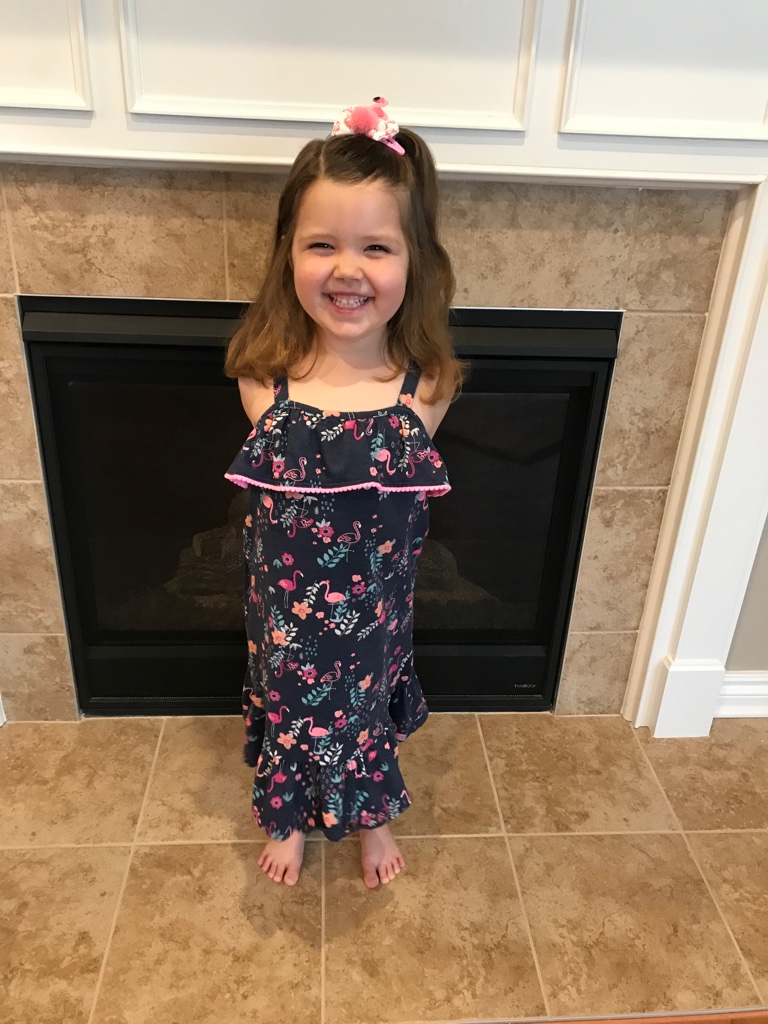 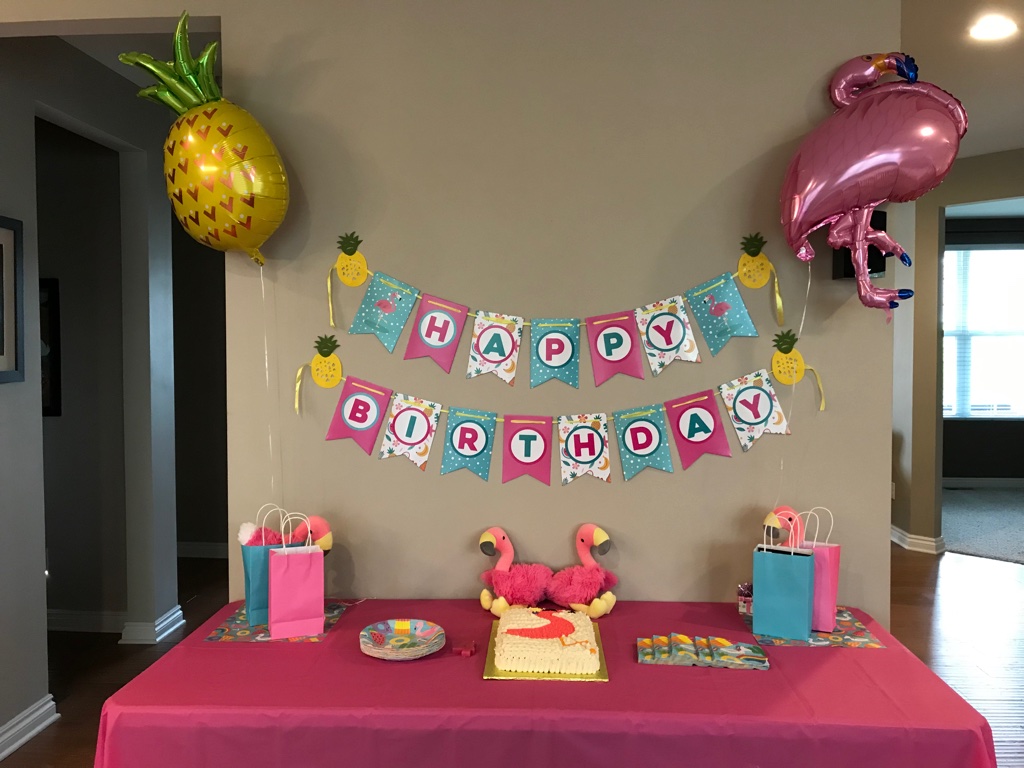 I have to say, I was pretty proud of the cake! See how the flamingo’s legs make the number four?! That was my inspiration for a flamingo themed party! 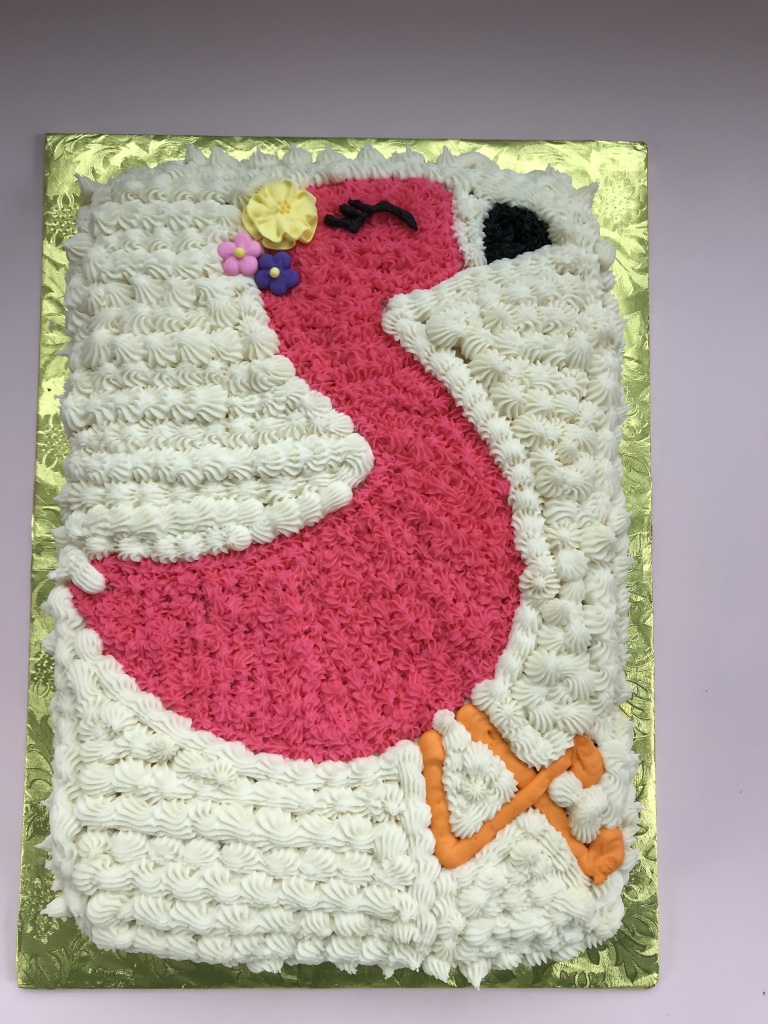 We had the food catered from Mission BBQ, and it was delicious! I was only responsible for the cake and the fruit salad . . . easy peasy! 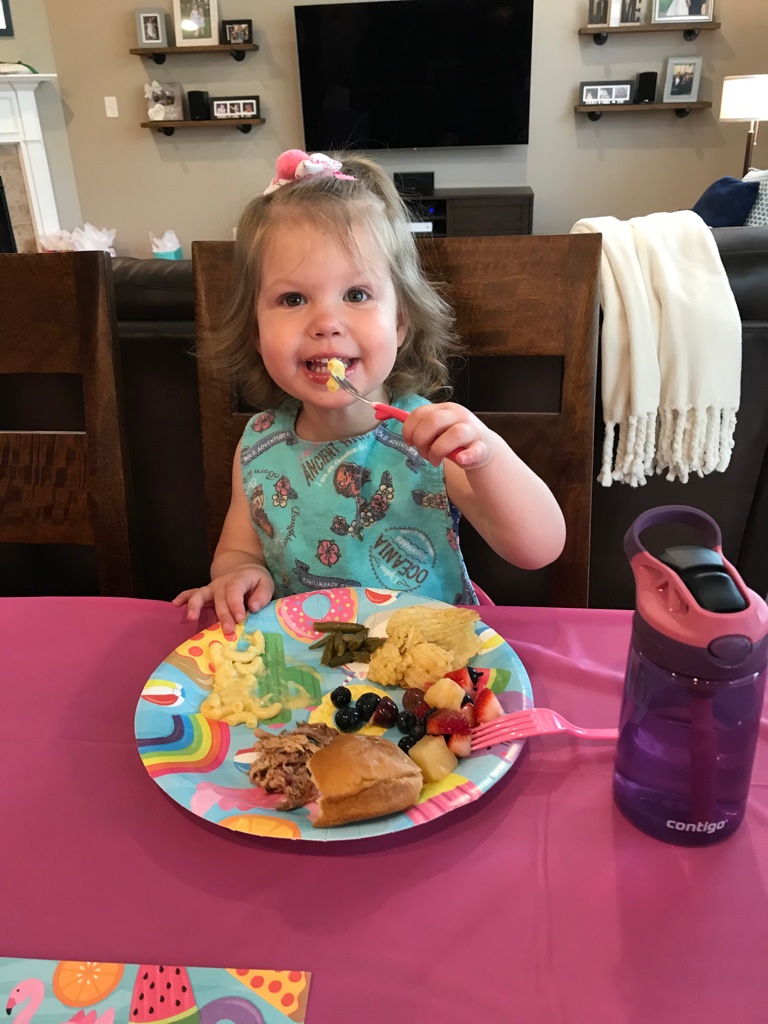 My parents got Lucy this adorable unicorn night light for her room. 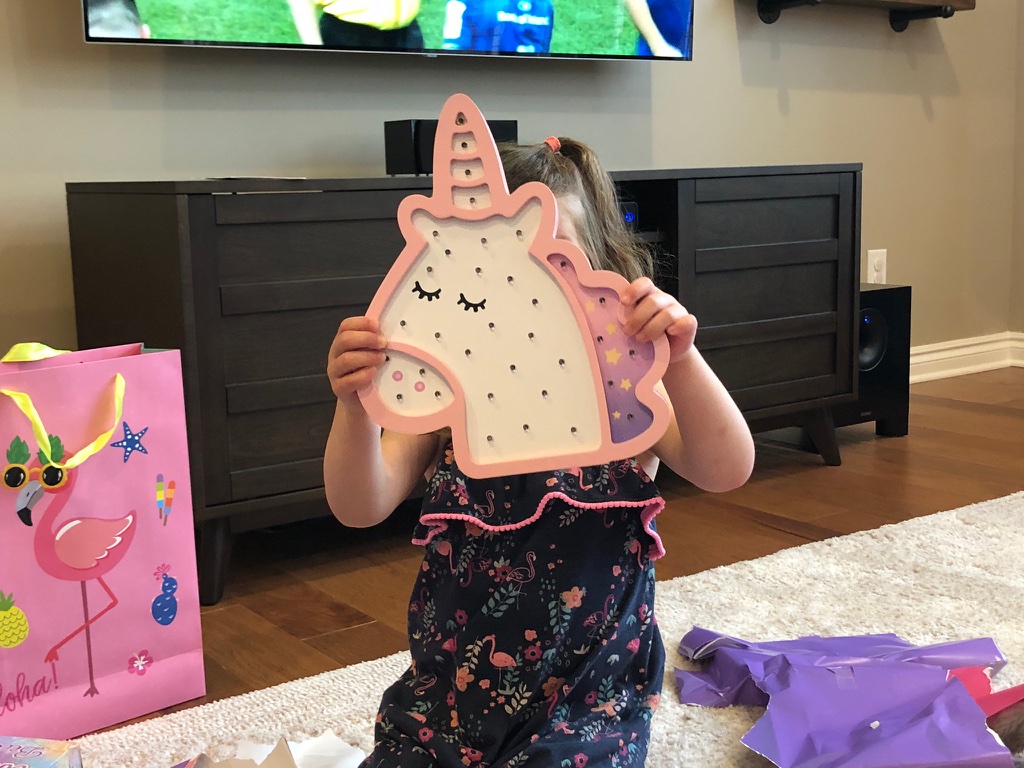 I’m working with Lucy on showing the proper emotions during gift opening. She started out a very grumpy opener, and was not pleased that my sweet nephew, Gordie, colored the flamingo blue on her birthday card. She’s still working on the whole “just smile and say thank you” technique. 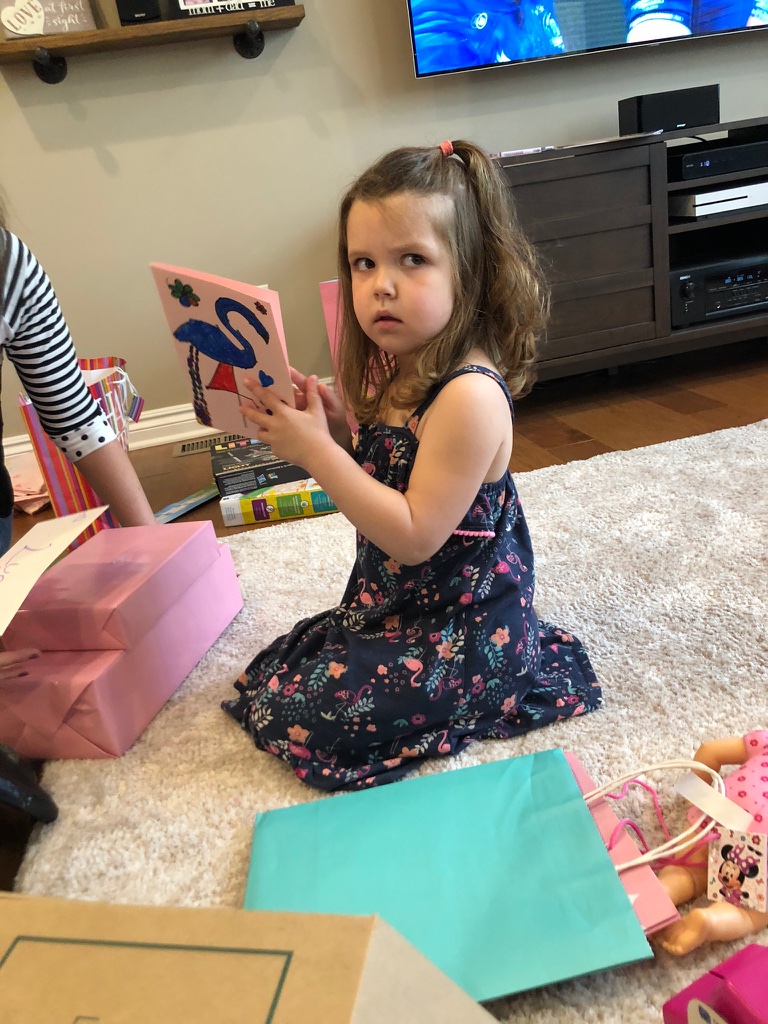 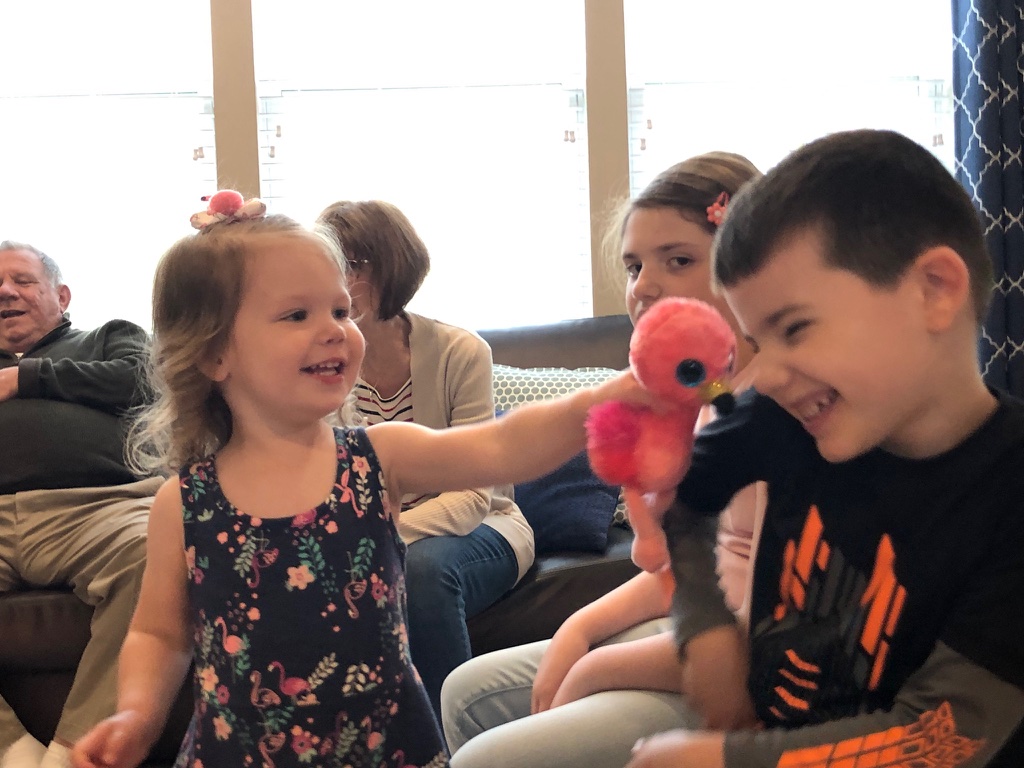 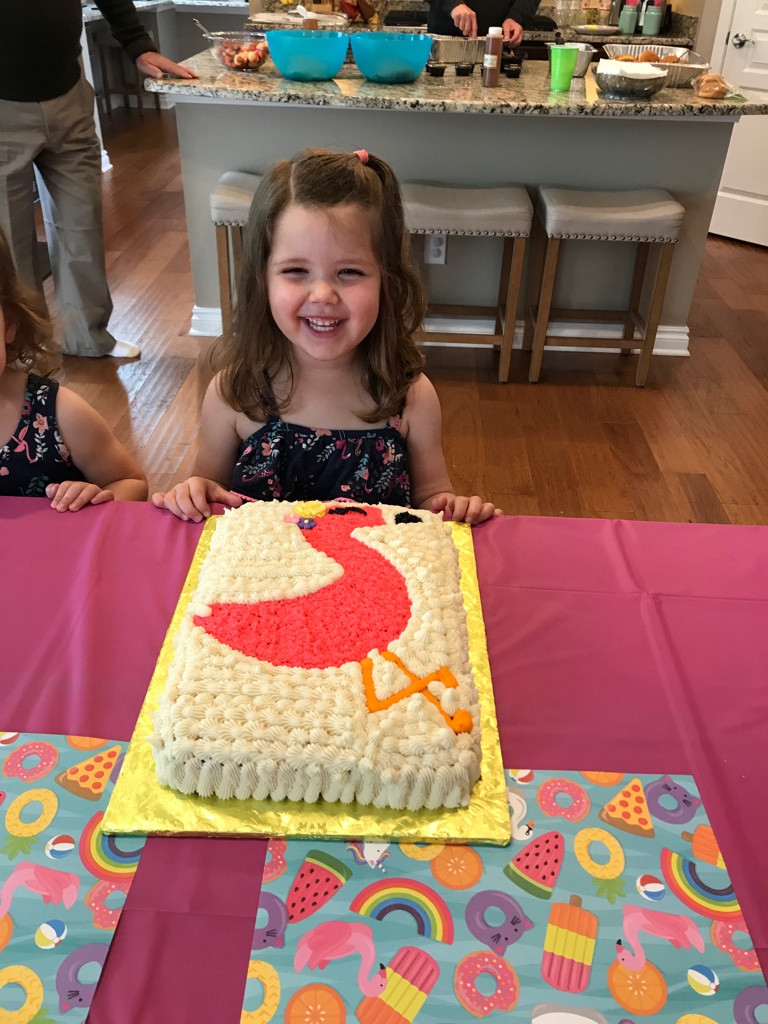 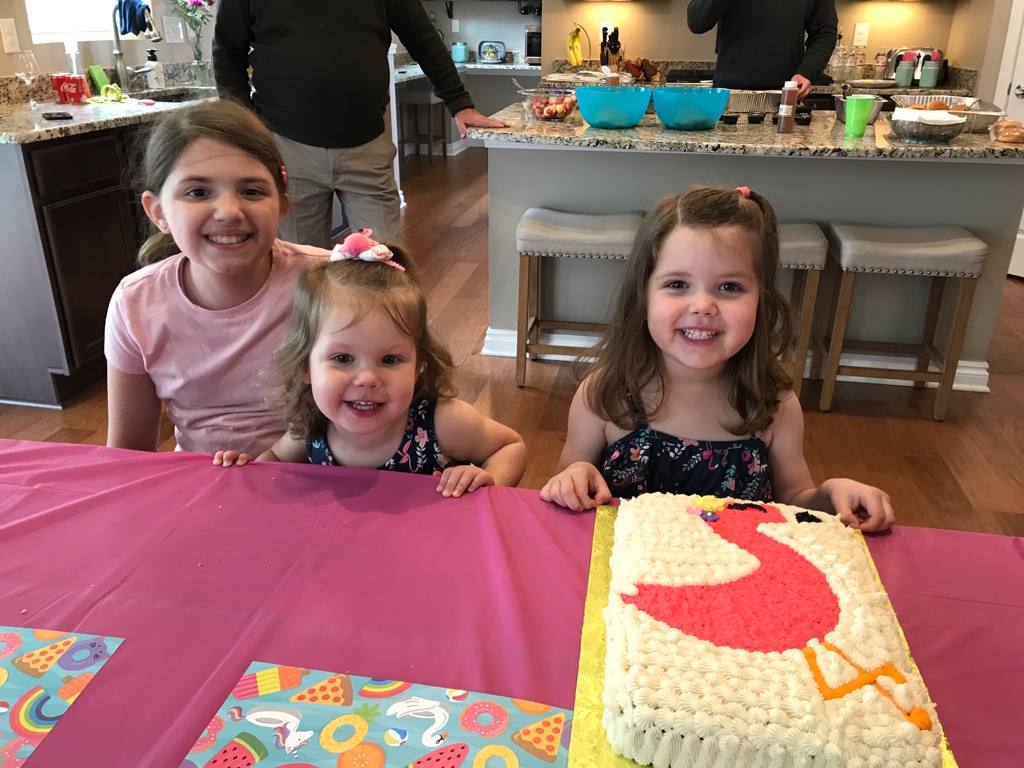 Emmy doesn’t understand that you’re only supposed to use your hands for your FIRST birthday. 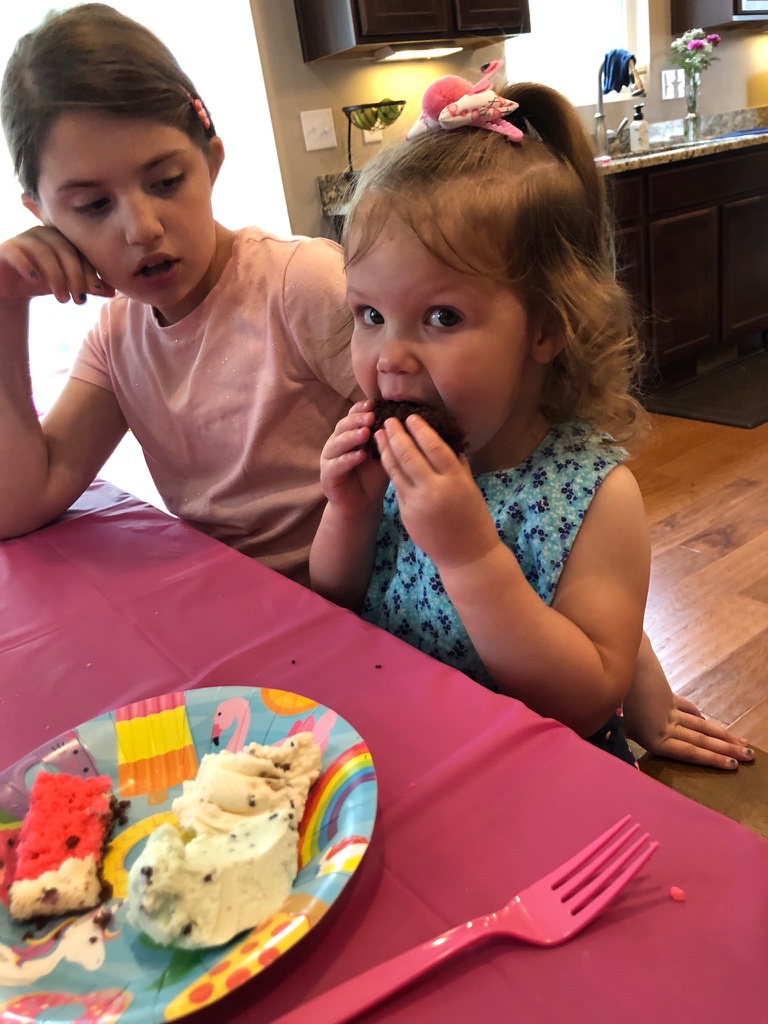 Check out Matty’s right hand in a fist on my arm. As soon as I saw this picture I said something to him and he was like, “I KNEW you were going to say that! I had something in my hand!” haha I’ll let it slide . . . this time. But only because his left hand did a good job. 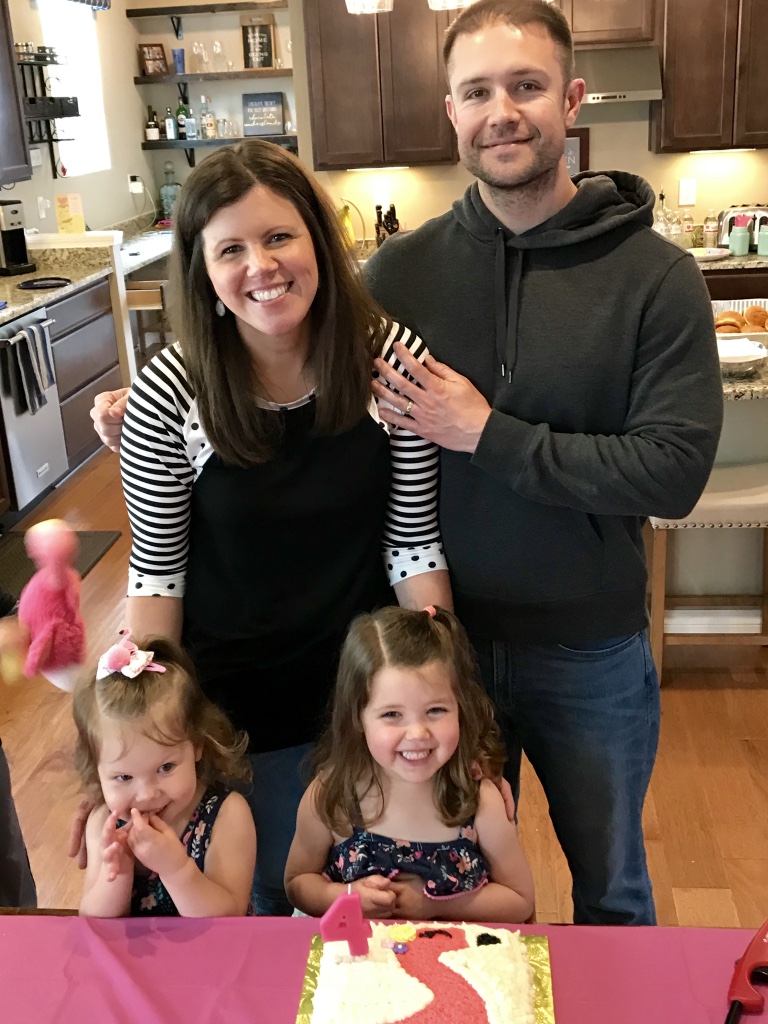 After presents and cake Papa hunkered down for a siesta, and the kiddos took that as an opportunity to cover him up with every stuffy in the house. 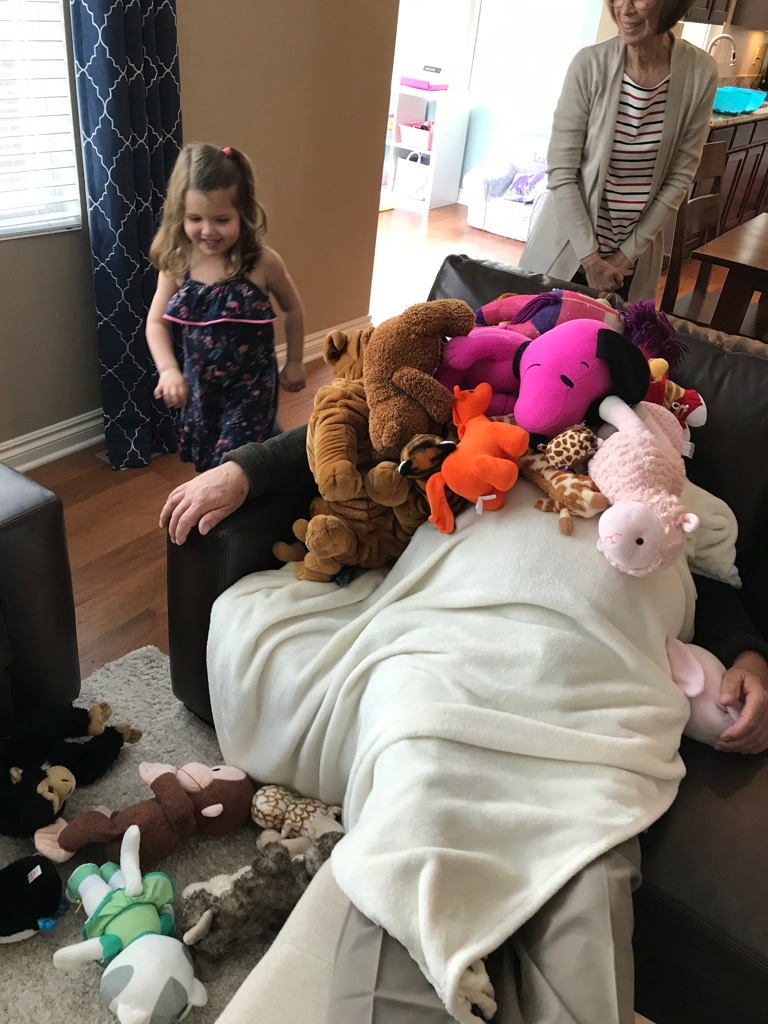 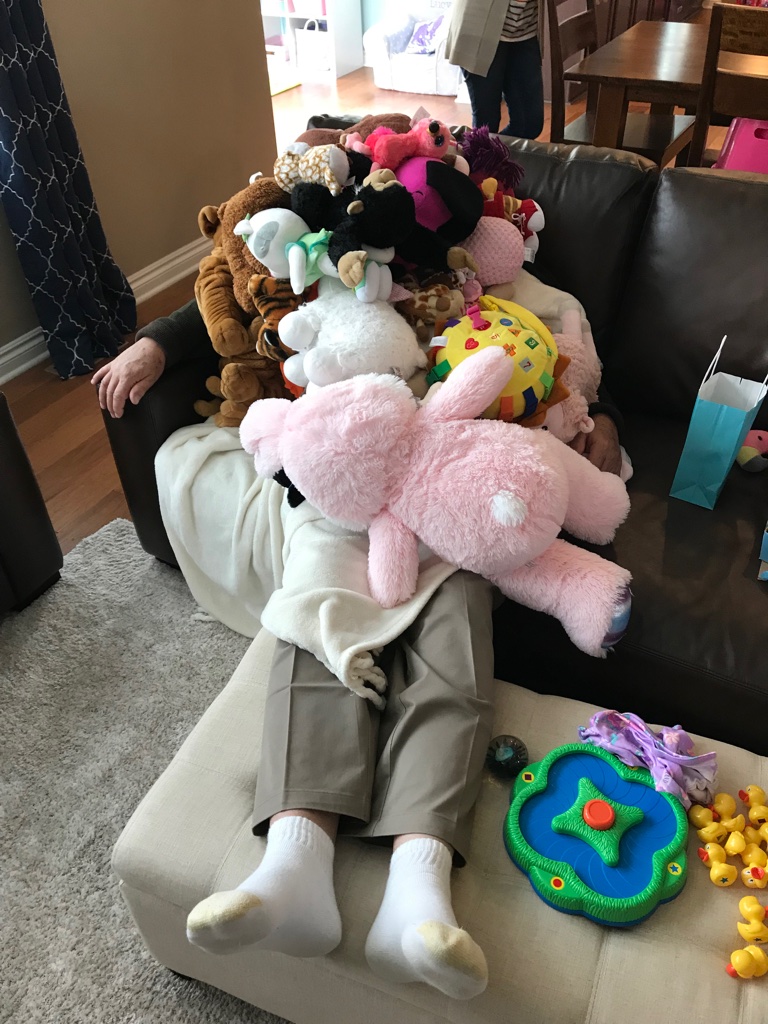 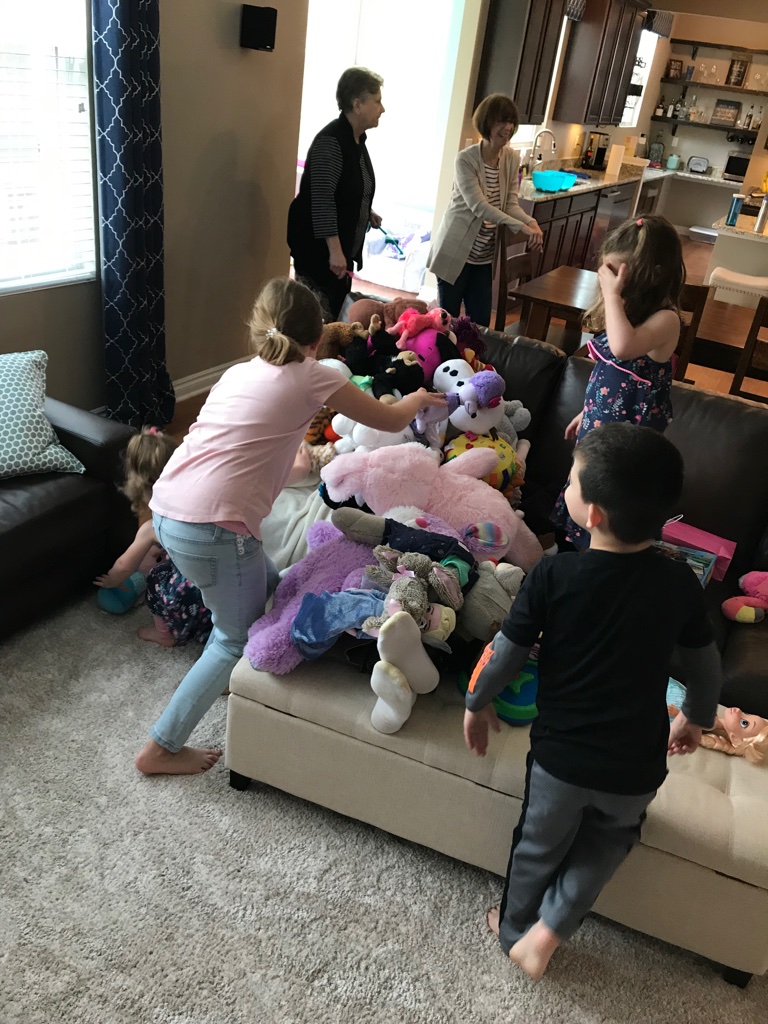 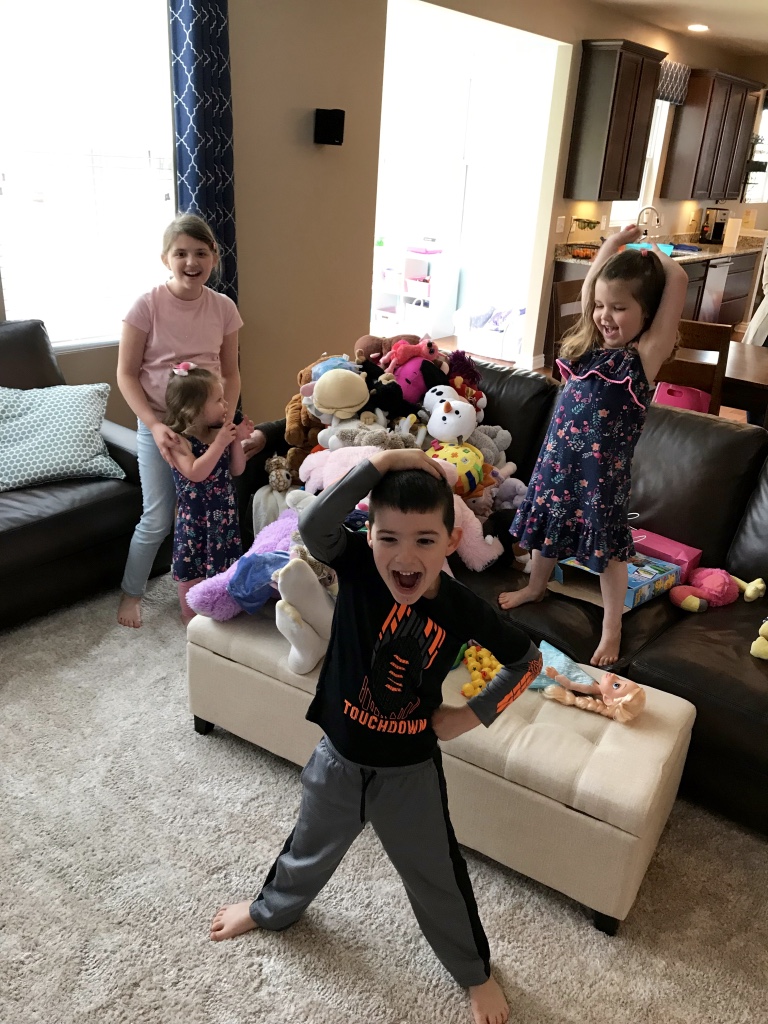 Once the stuffies were cleared away, Matty settled down for his siesta. The kids know better than to try and mess with Matty while he’s snoozing. 😉 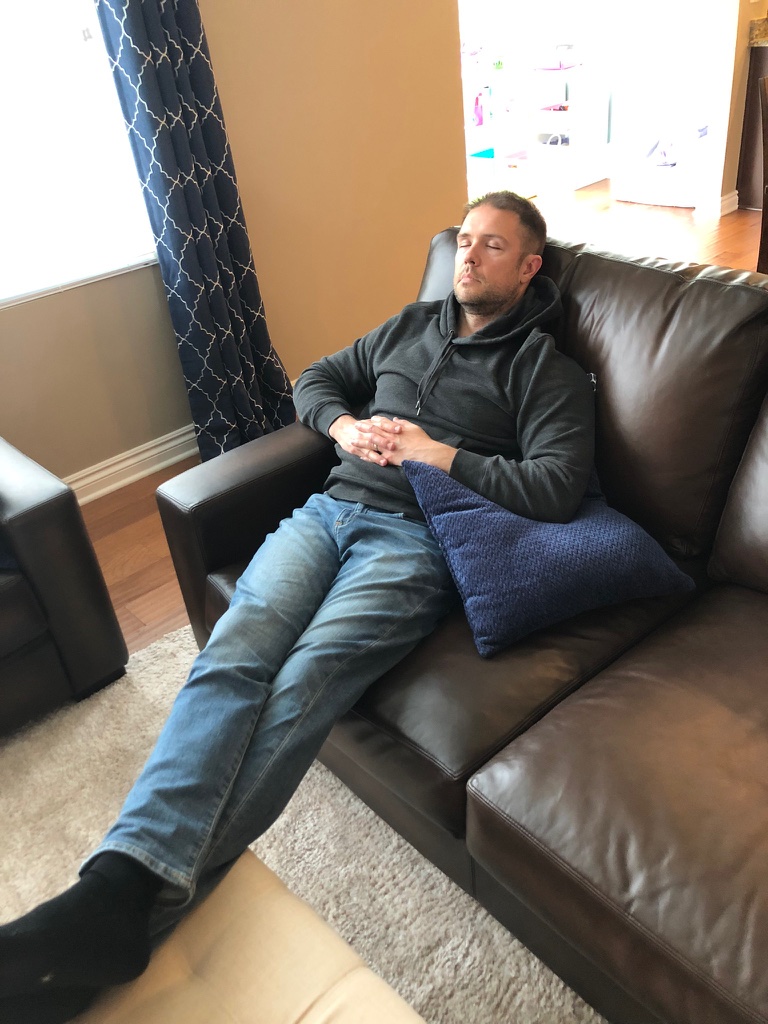 And then yesterday was Mother’s Day, and I have zero pictures!
I had a great day, though. It started with a Mother’s Day miracle . . . Emmy only woke up once throughout the whole night, and then everyone (even me!) slept in until 8:00!!
There were homemade cards from the girls, an Ulta gift card from Matty (forget a bouquet of roses, he knows what this mama wants!), and a trip to the nail salon during nap time. I’m one lucky mama!
We don’t have much on the calendar for the week. Lucy’s actual birthday is Wednesday. She’s requested pizza for dinner, and we’ll give her the presents from us, but otherwise it will be a low key day. She’s already had enough celebrating!
Matty starts golf league on Tuesday . . . yay for him! 😉
Have a great week!
XOXO