TGIF!!
I feel like a broken record, but I’m keeping it simple today because I’m starting this at 9:30 Thursday evening and I’m tired!
Here are three things about each of us right now. 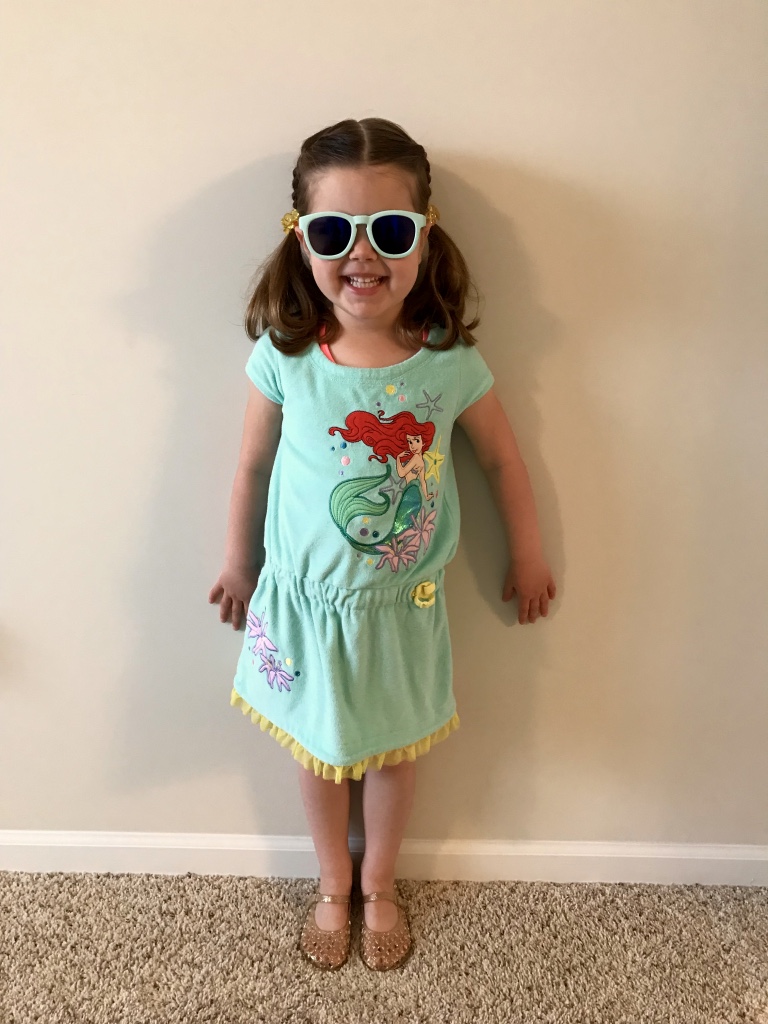 Yesterday was Beach Day at school!
~ ONE ~
Lucy is obsessed with puzzles lately. It seems like one morning she woke up and decided she was ready for big girl puzzles. She’ll sit for a LONG time and work on 50, 100, or even 150 piece puzzles! Sometimes I can tell she’s mentally tired and needs a break because she gets fussy with herself while doing them. I love sitting there observing how her little mind works, but God forbid I try to help her out. Yikes!
~ TWO ~
Her birthday is this month and, other than a new bike helmet, she won’t give us any ideas of what she wants for her birthday. She says she wants it to be a surprise. I feel like she must have an idea of something in her head, though, and I hope she’s not disappointed with the great gifts she’s getting!
~ THREE ~
Lucy finishes up three-year-old preschool this month, and I’m so proud of how much she’s grown over the school year. She still has a long way to go, but she’s interacting with her classmates more, doesn’t seem so shy and nervous at drop off, and has even willingly started telling me more about her day. I’m entertaining the idea of signing her up for some sort of summer camp so that she can continue being away from me for little chunks of time. We shall see.

~ ONE ~
Emmy’s not quite entered the Terrible Two’s yet but she’s dipping her toes in the pool to test out the water, that’s for sure! She is sweet as can be 95% of the time, but every once in awhile a stubborn streak comes out!
~ TWO ~
We have a Disney princess ride on car that the girls play with in the house, and Emily has been obsessed with it for weeks now. She wants to zip around the house on it all the time and loses her mind when Lucy rides it . . . which of course makes it all more enticing for Lucy to ride. The concept of sharing is a work in progress for both girls!
~ THREE ~
Emily loves to sing, and she put on quite a performance of Twinkle Twinkle Little Star for everyone in the dairy aisle at Kroger the other day. I hear her singing along with songs on TV while she’s watching a show and singing Happy Birthday to her stuffies in her crib. She has the sweetest little singing voice, and I could listen to it all day long! 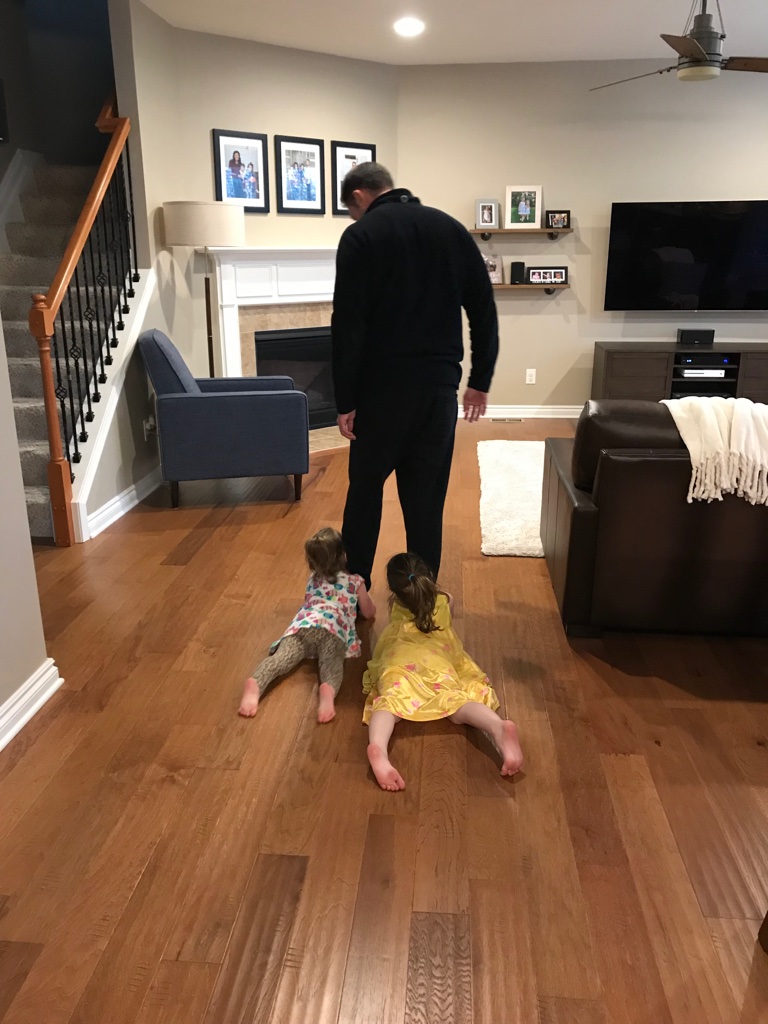 He found a new way to clean the floor!
~ ONE ~
Golf league starts in less than two weeks, and Matty is ready for it. And just like that, Tuesdays will become my least favorite day of the week. 🙂
~ TWO ~
Grass cutting season has begun, and Matty is diligently following the schedule he created for his lawn maintenance. Our grass is looking good, and all the neighbors have noticed/commented/asked for advice. He’s the lawn guy now.
~ THREE ~
He’s currently lying next to me in bed watching a car video on his iPad. Next will be a lawn video, and then his nightly food video from Sam the Cooking Guy. He has a very predictable nightly wind down routine. 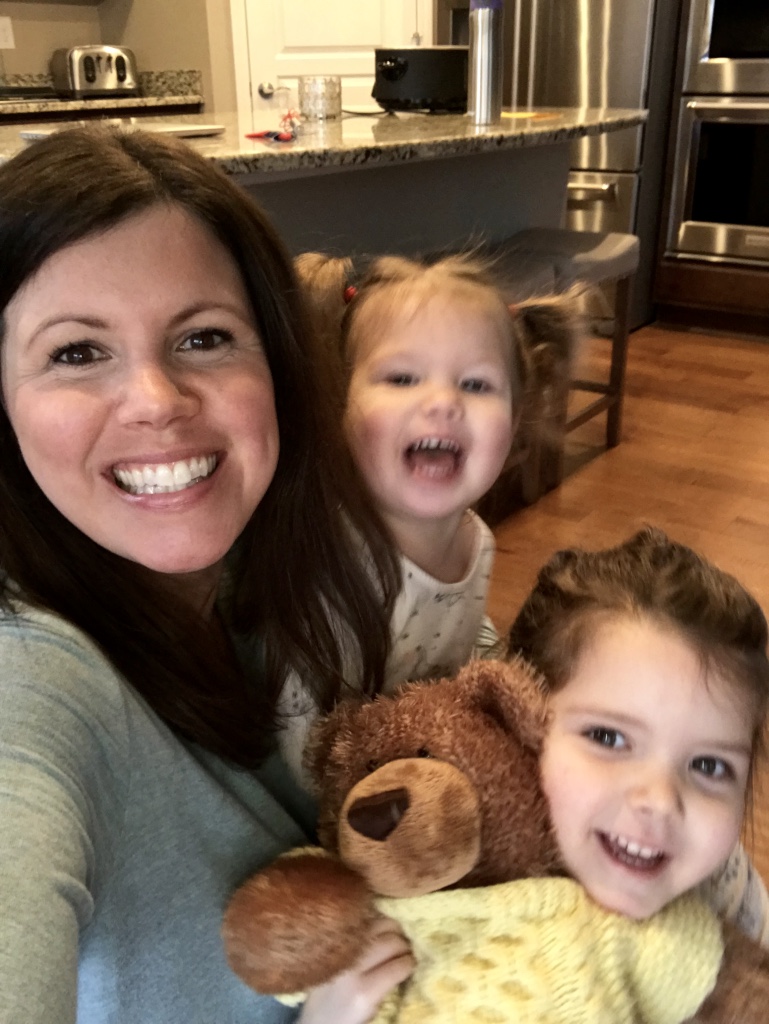 This picture is from a month or two ago. I obviously need to try to take more pictures of myself.
1. I’m trying to be more present. I don’t need to delete the Instagram and Facebook apps from my phone or anything like that, but there have been a few times where the girls (Emmy especially!) will say, “Put your phone away, mama.” So now when I go to play with them I usually leave my phone on the counter. . .or snap a few pictures and then put it on the counter! 🙂 We always watch a show before the girls go to bed, and I do my best to stay off my phone during those 30 minutes every night. If it’s been a crazy day where I literally haven’t been away from the girls at all or haven’t returned any messages all day I may pick it up for a few minutes. Otherwise, I like having them know that mama is there with them and focused up.
2. I’m not sure how I survived two newborn stages. Emmy’s sleep regression is still going strong and naps/bedtimes are super unpredictable. Two nights ago was the first night in weeks that I got a solid SIX HOURS of uninterrupted sleep. I dread bedtime now because I never know how long I’ll get to be cozy in my bed. Once you create really good sleepers, it’s hard to go back to waking up all the time!
3. I miss trying new recipes. I feel like we’ve gotten into a dinner rut. I’m still doing pretty well with meal planning/prep, but it’s the same things over and over again. I need to start trying a new recipe every week or two.
Bonus: I had a hard time coming up with three things about me. I feel like I’m the most boring person ever lately!
We have a first birthday party for a special little girl on Saturday, and then I’m doing an early Mother’s Day celebration with my mom on Sunday.
The weekend is looking good!
XOXO