Happy Monday!
Most Mondays I feel prepped and ready to tackle the week ahead. This isn’t one of them!
We had a super productive weekend, which was great, but it was also busy so I don’t feel like I got any relaxation time in . . . can’t we have one more day just for that?!
We spent the day Friday preparing for Matty’s arrival home from Mexico. I cleaned/vacuumed/dusted the entire house, did some laundry, made a grocery run, and even had a whole chicken and veggies roasting in the oven when Matty walked in the door! I’d be lying if I said I didn’t feel like wife of the year! 😉
While I was doing some vacuuming, Lucy completed this big girl puzzle all by herself! I love how proud of herself she was! 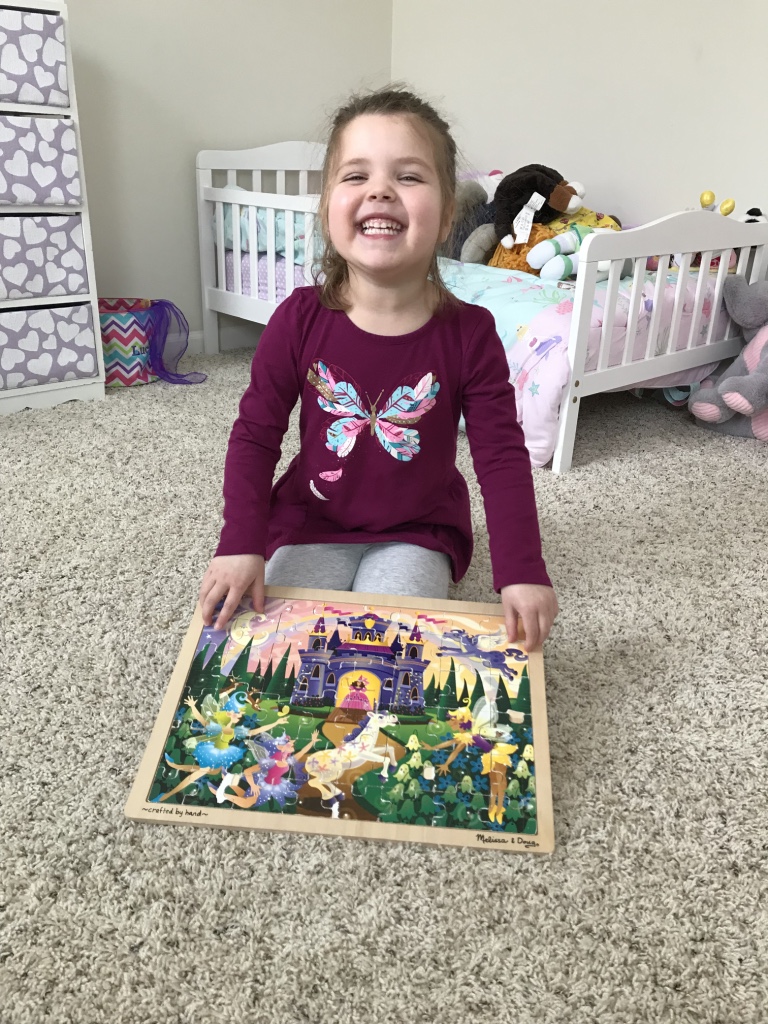 Matty got home about 5:15 and was immediately more fun than mommy had been all week! 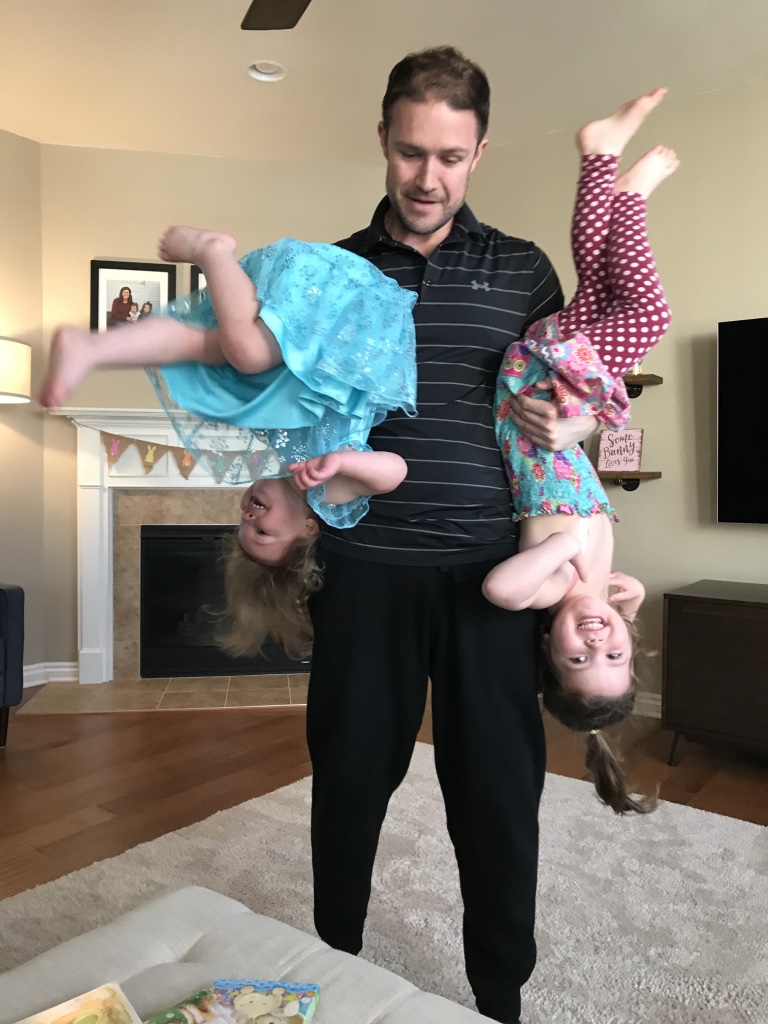 Saturday was a BEAUTIFUL day! We started off the day by checking out a preschool for Lucy for next year. Then we came home and the girls played while Matty and I started the prep work for painting Lucy’s room: we moved everything into the guest room, took everything off the walls, filled in holes, and taped. Then Grandma Rita came over for lunch. After we ate, we played outside for awhile before Emmy’s nap. She was loving the fantastic weather! 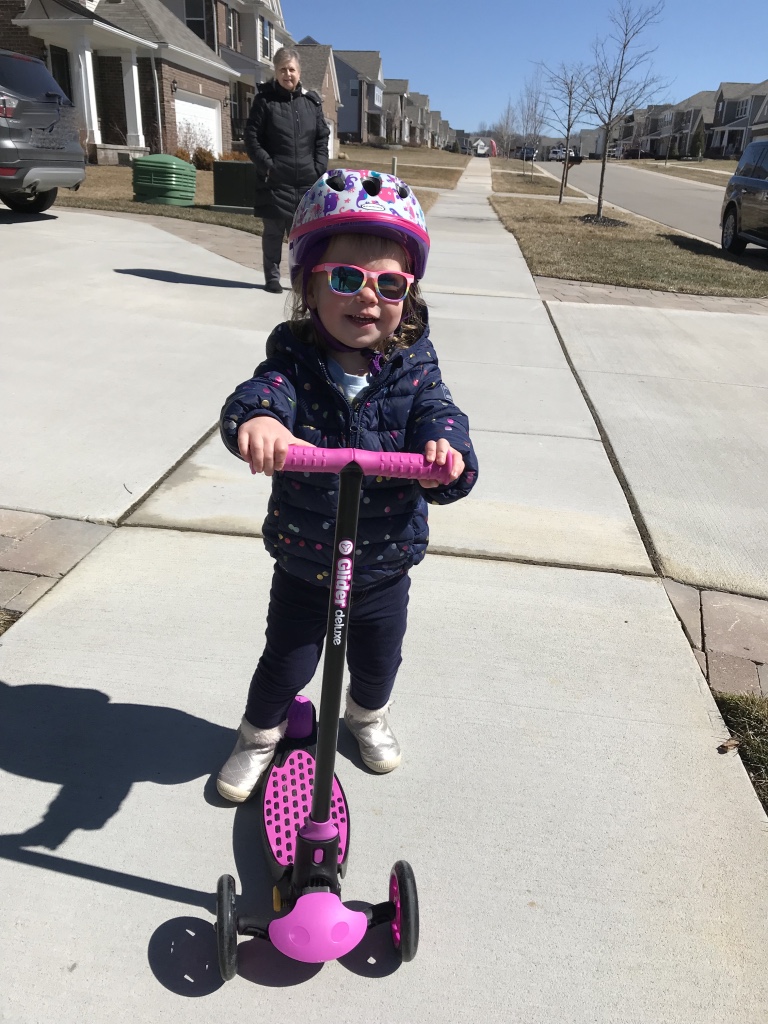 Lucy hung with Rita while Emmy napped, and Matty and I got the first coat of paint done in Lucy’s room. That was followed by some more time outside playing and enjoying some driveway drinks . . .until Lucy took a pretty good spill on the scooter and scraped her face on the sidewalk. Oops! She hadn’t been drinking, though! 😉 Then it was dinner, bath, and bed time. We tried to start season 3 of True Detective after the girls were down, and I think Matty reported that I made it for about 20 minutes. #mamatired
Here I am at the grocery at 8:03 on Sunday morning . . . by myself!!! I knew we had a busy day, so I was up and out early to get the grocery run out of the way. 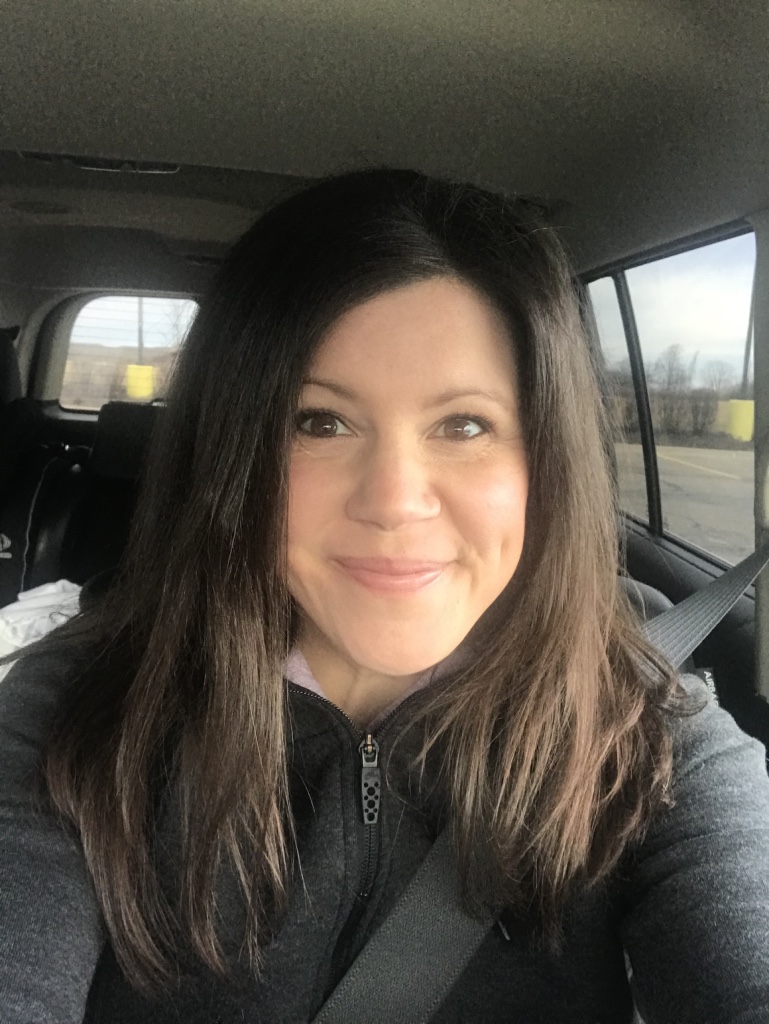 Our plan was to let the girls snack on their breakfast up in the loft while we put the second coat of paint on Lucy’s walls. I had their breakfast prepped and ready to go! 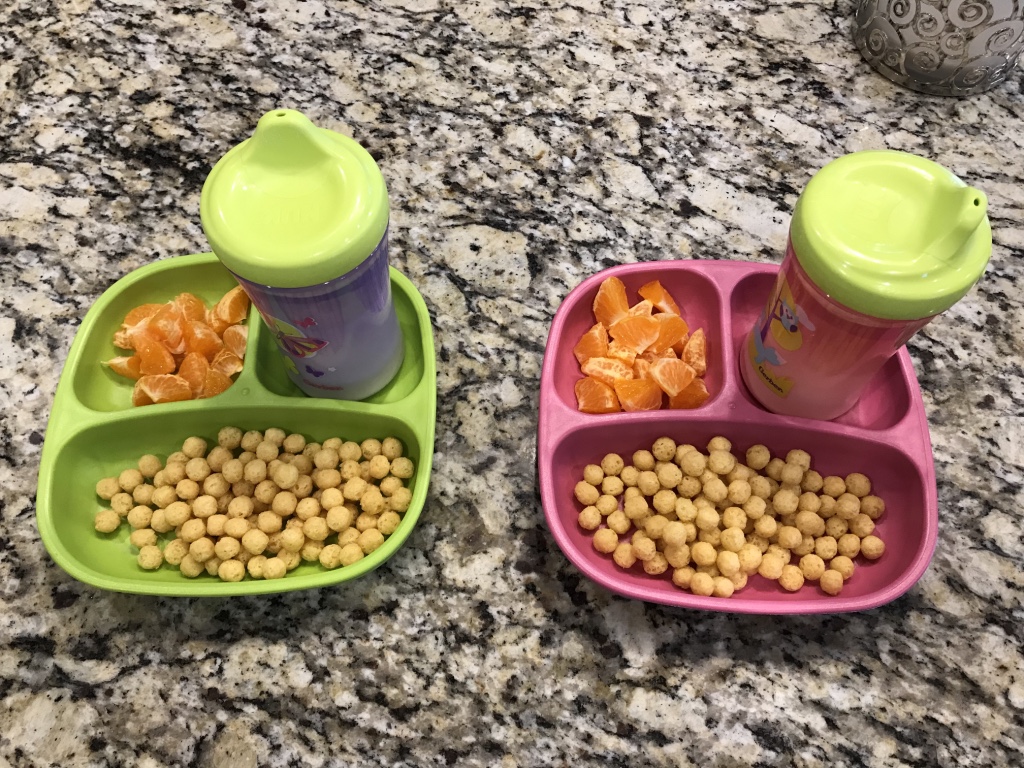 Emmy slept until 9:30am! But I got them settled in for breakfast and a movie right away, and Matty and I got to work. We were all finished and cleaned up by about 11:30, which was good because we had a birthday party at noon! 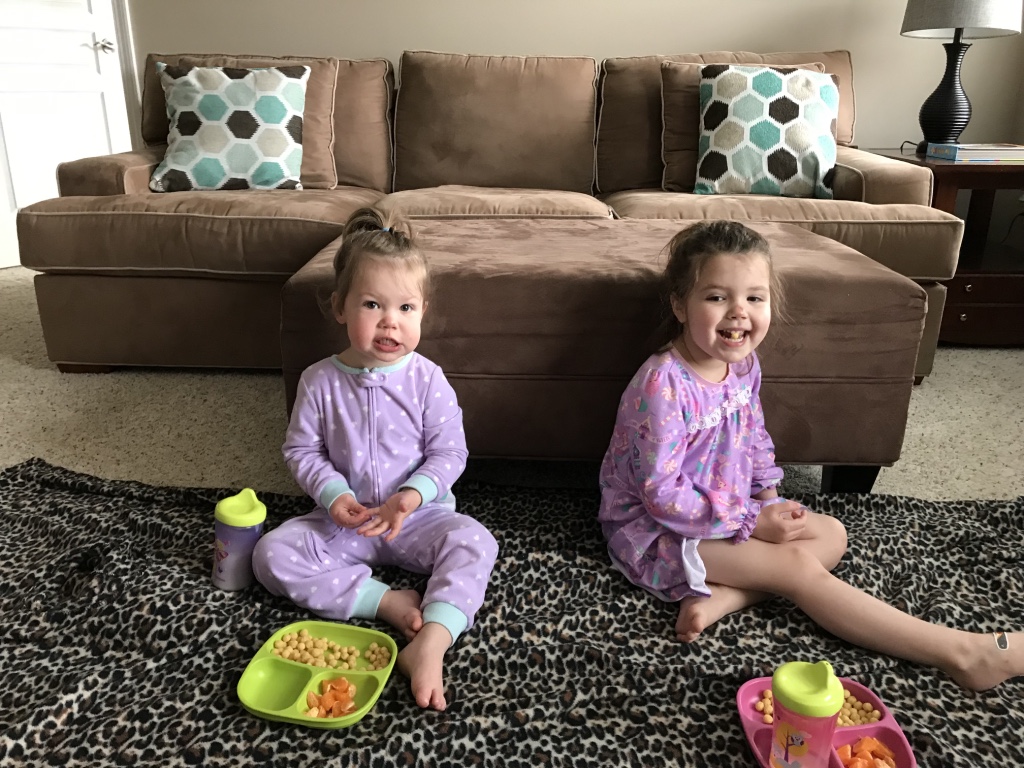 Here’s the aftermath of Lucy’s run in with the sidewalk. She handled it pretty well, and we were able to fix her right up with a gentle face washing and some marshmallows! 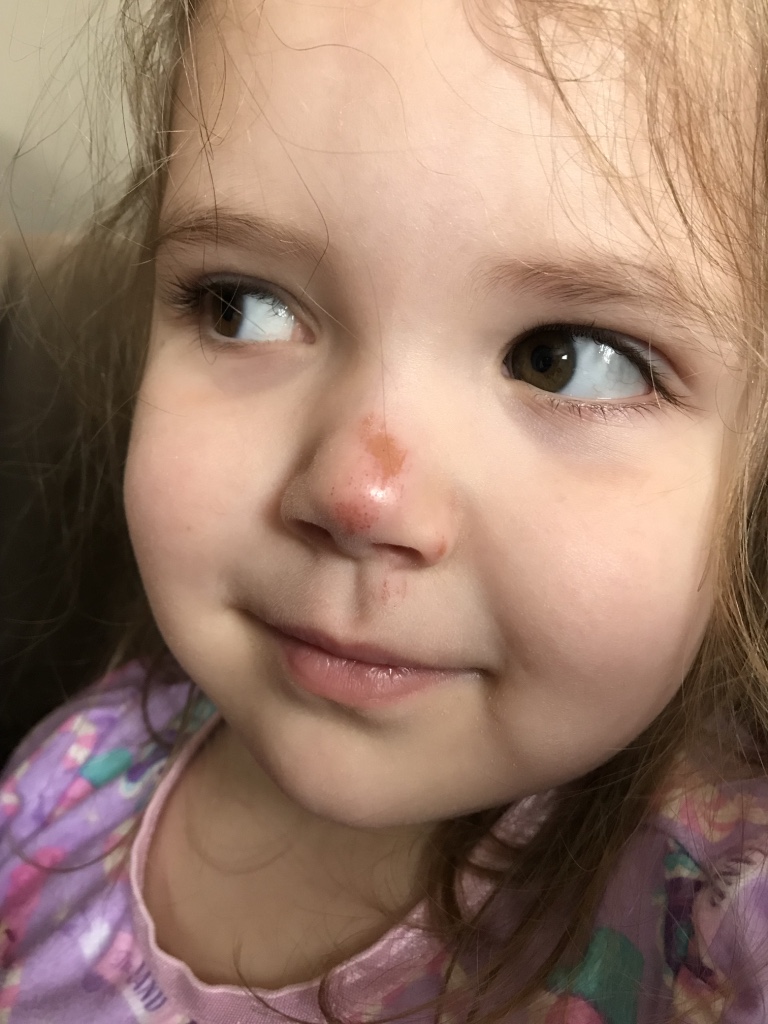 We went to a first birthday party yesterday, and the girls had a great time! 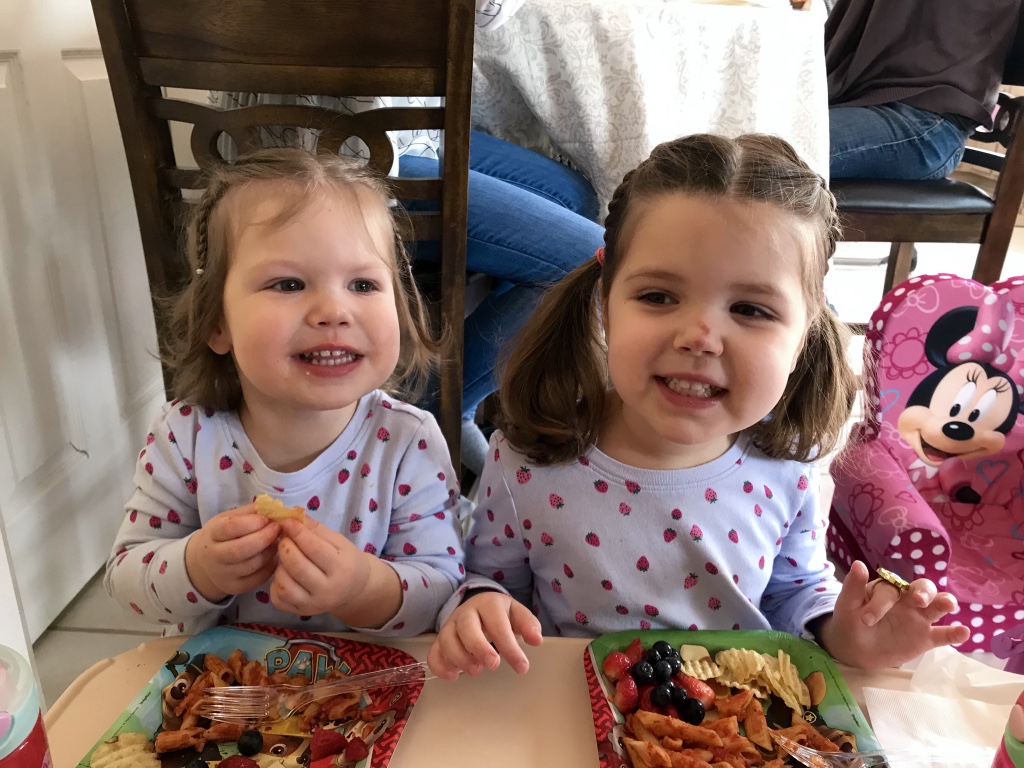 They waited so patiently for the cake. Emmy must have been confused and thought it was HER first birthday again because she used her hands and shoved that cake right in her mouth! Hopefully she’ll have a better technique by her birthday party next weekend! 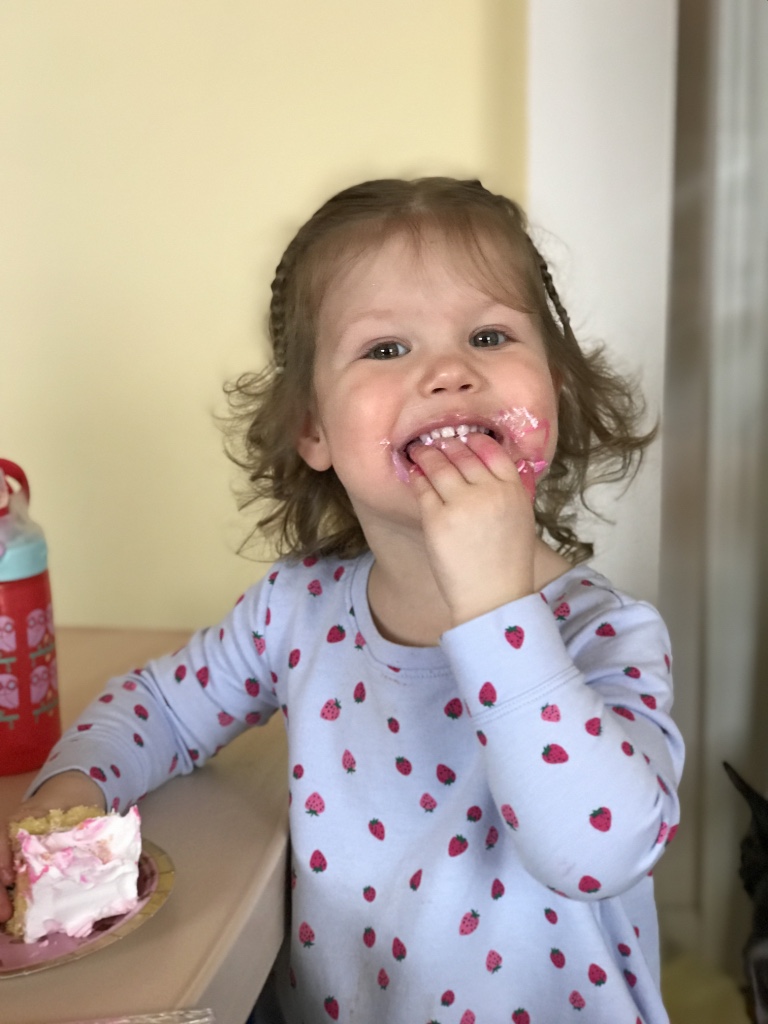 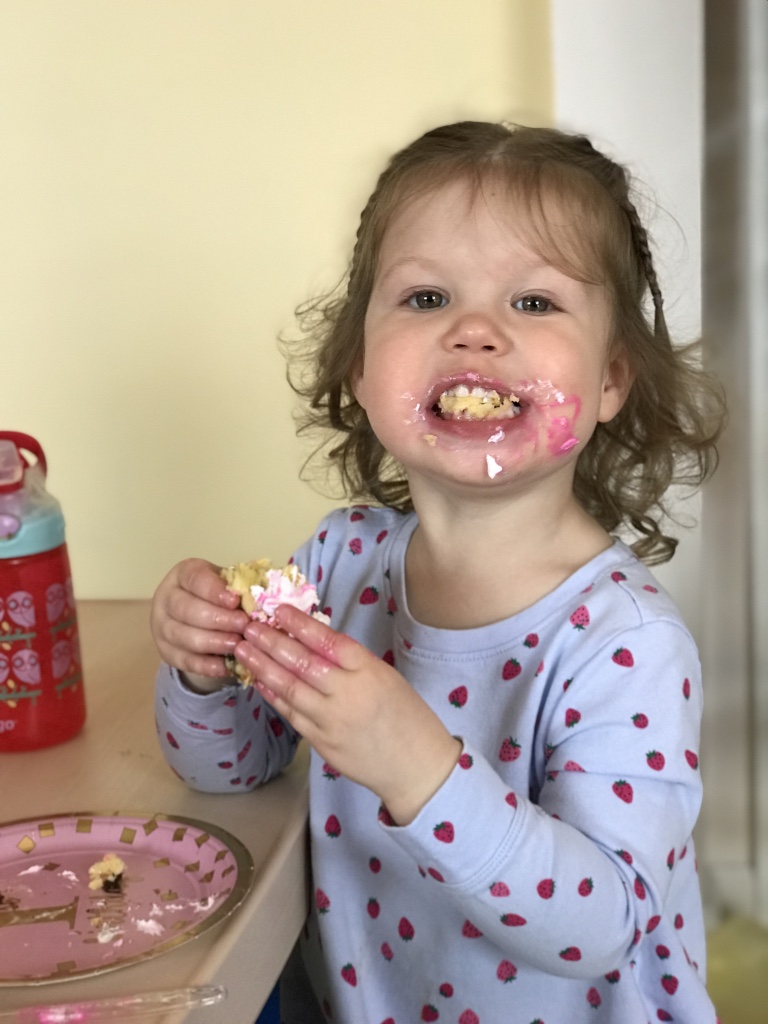 Lucy was a little more ladylike! 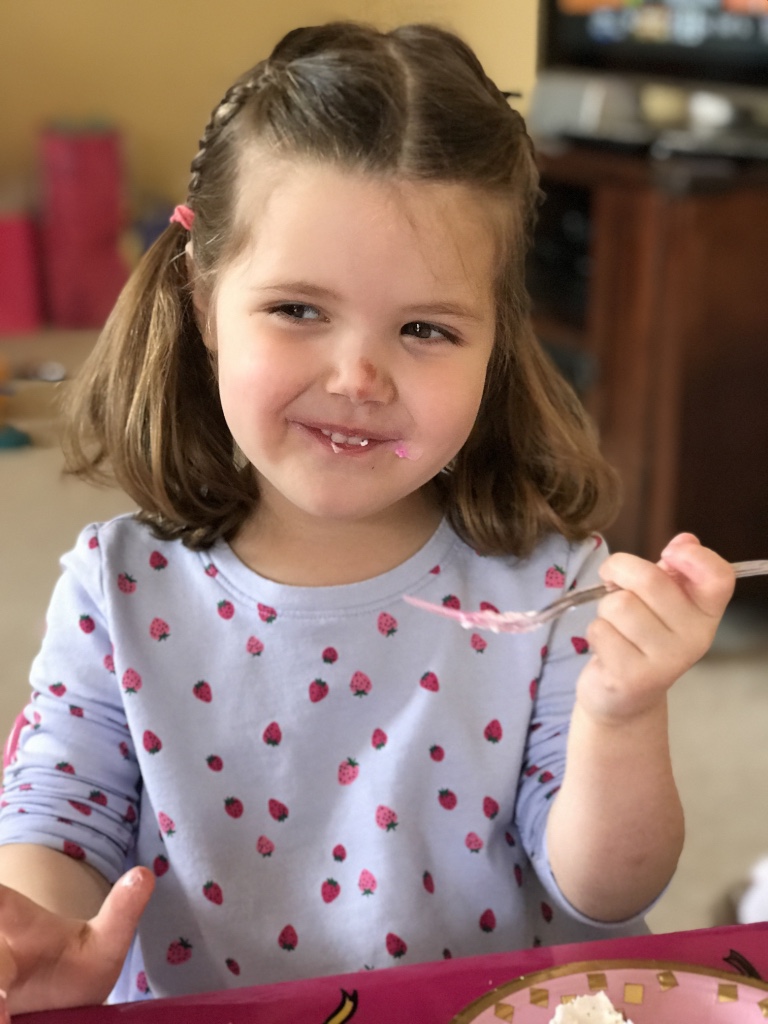 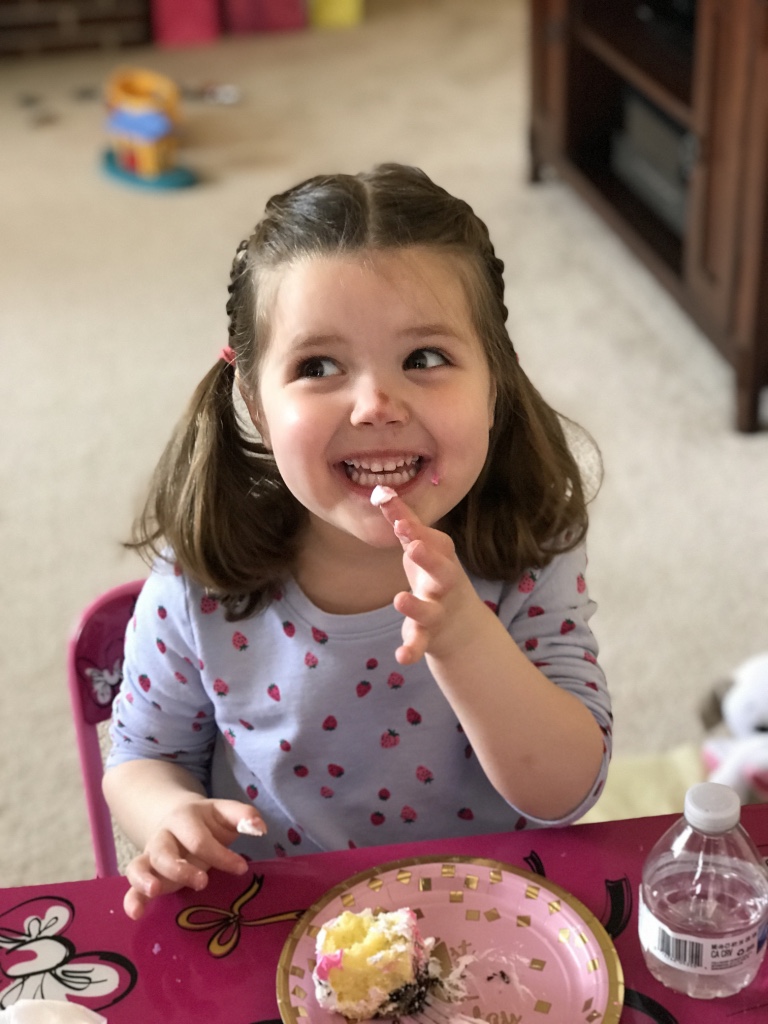 We got home from the party around 2:30 and played outside until after 5:00! Lucy finally got to try one of these power wheels things, and she’s hooked! 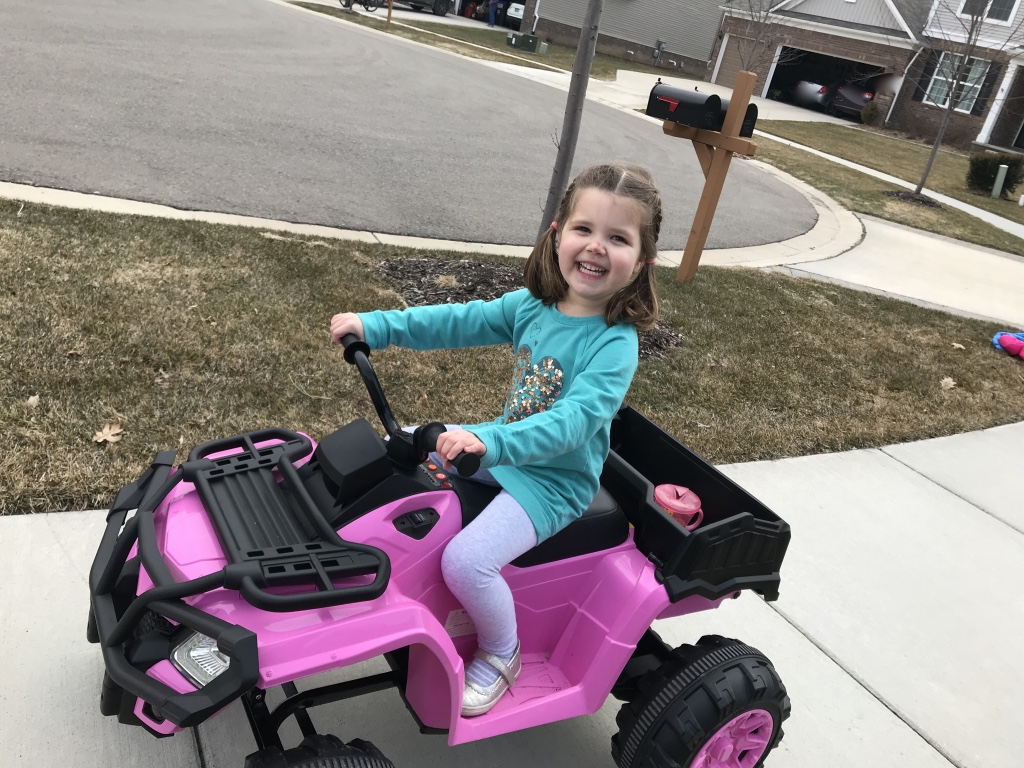 The girls love dunking the basketball at Mr. Chris’s house! 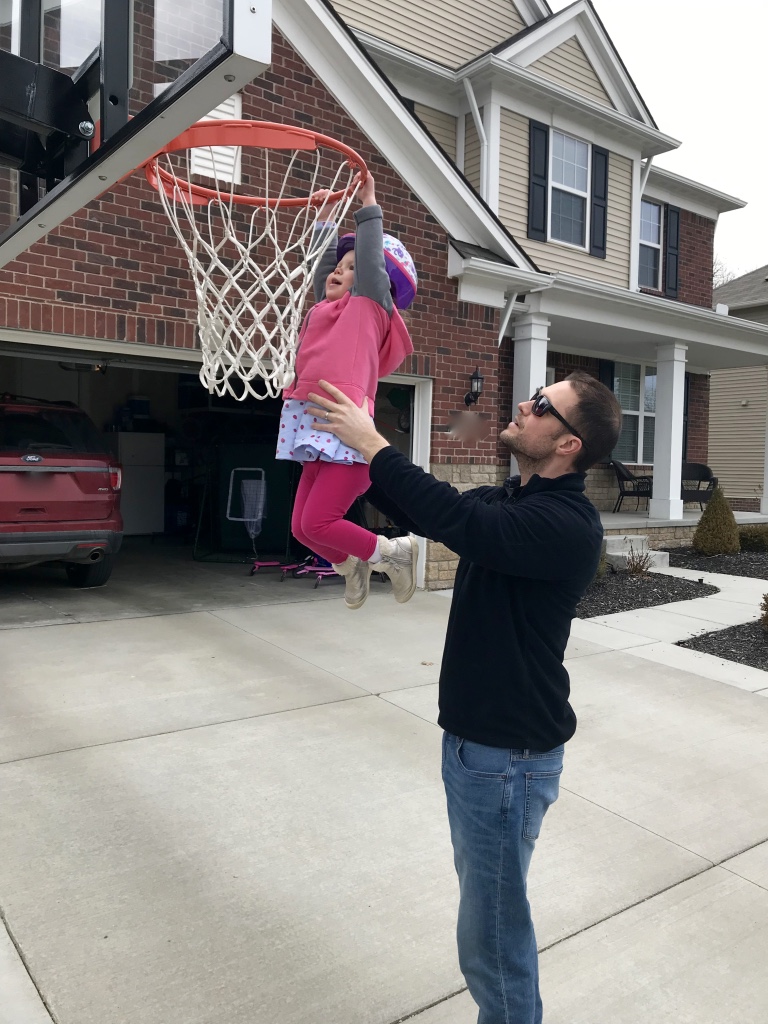 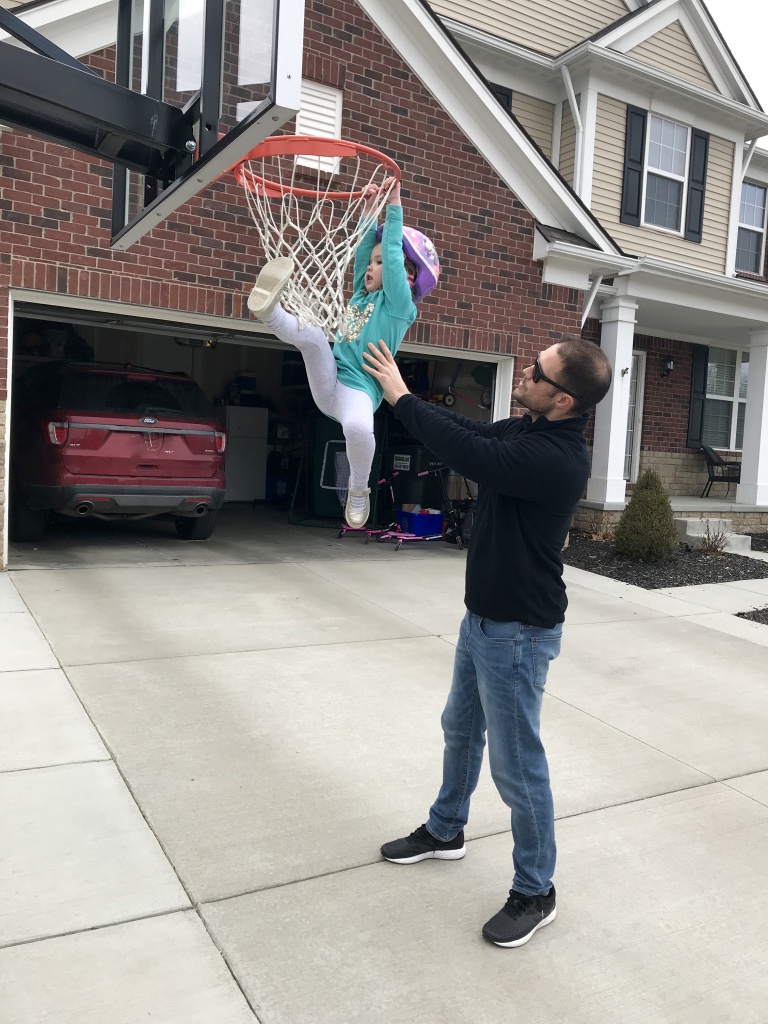 They also tried out a big wheel and loved it . . . of course! 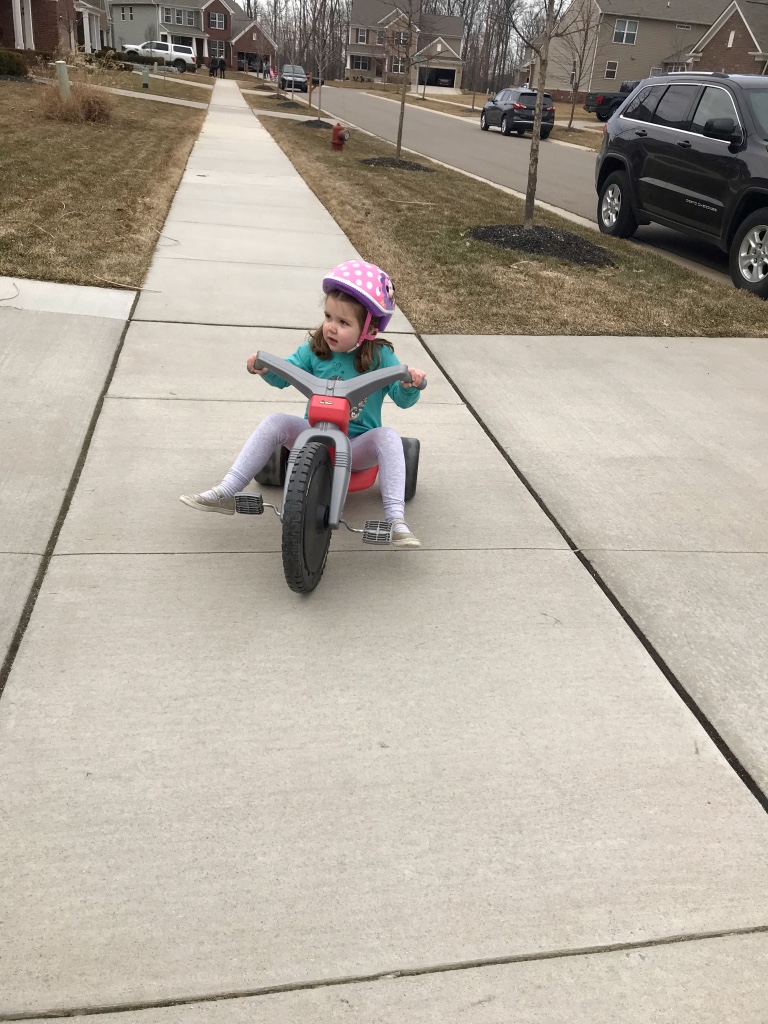 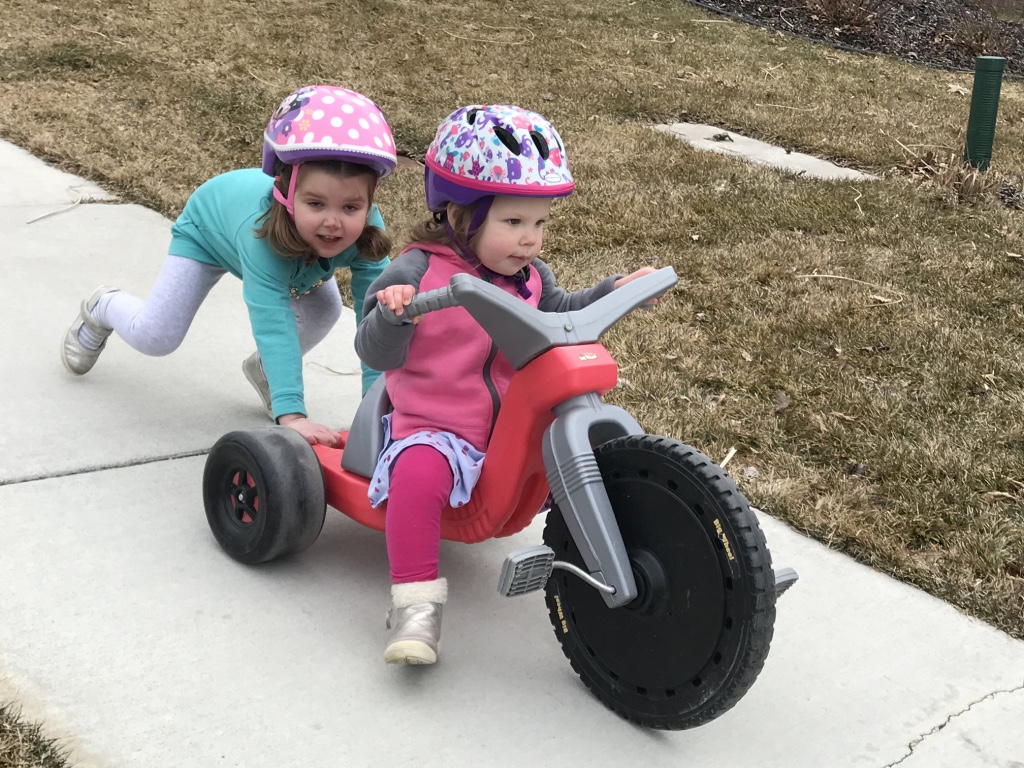 Once we finally got inside it was dinner time, meal prep for the week, and then bath and bed.
This week will be spent getting things ready for Emmy’s birthday weekend!!
Have a great week!
XOXO