TGIF!!!
St. Patrick’s Day is just around the corner, and you don’t have to ask me twice to celebrate a holiday!
Here are a few things my two little leprechauns and I have been doing to get in the Irish spirit. (Unfortunately, it hasn’t involved any Bailey’s or Guinness!)
Mint Chocolate Brownies 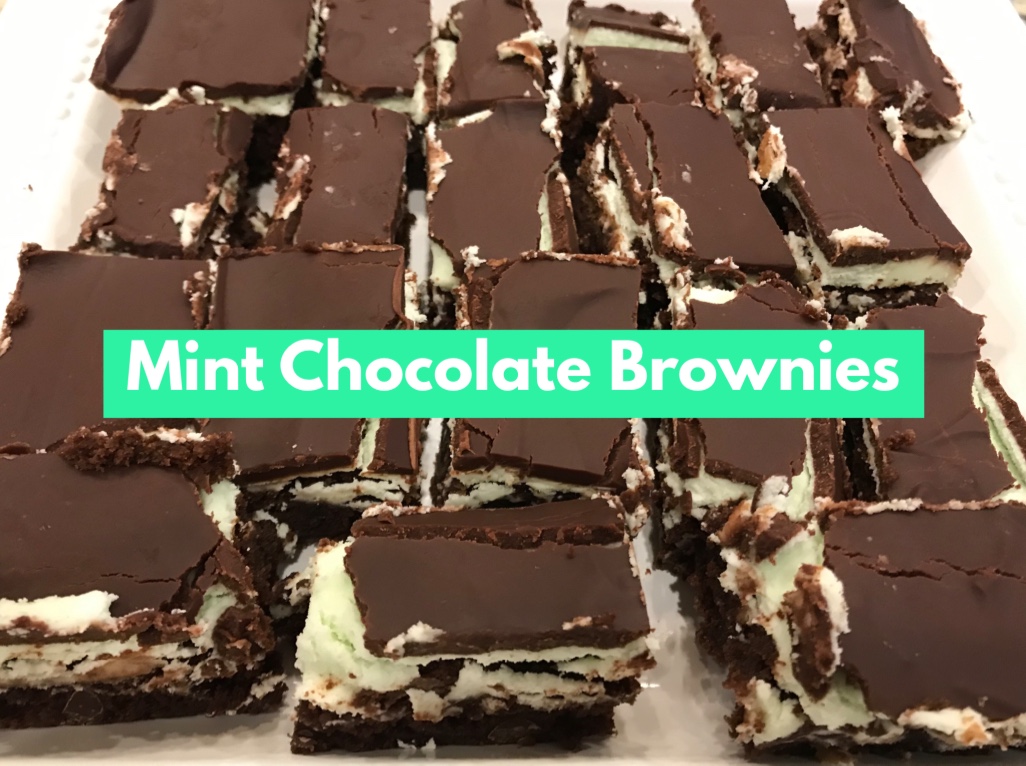 You know me . . .I’ll take any excuse I can get to bake! Finding something with a hint of green in it seemed like a good idea. I started by going through my recipe box and found a recipe for mint chocolate brownies that my college friend, Aimee, had given me at my wedding shower. I wish I hadn’t waited almost 13 years to make them because they are delicious!
The recipe calls for two boxes of brownie mix. I always use Ghirardelli brownie mixes. And, as far as I’m concerned, there’s never a reason NOT to use a mix with chocolate chips in it . . . or to add a few of your own! I feel very strongly about this, and so does Matty. It may have even been in our marriage vows.
“I promise to love, honor, and cherish you as long as we both shall live . . . and to always use brownie mixes with chocolate chips in them.”


Yikes, maybe I was wrong about that Bailey’s and Guinness! 😉
Anyway, I used two boxes of this brownie mix. 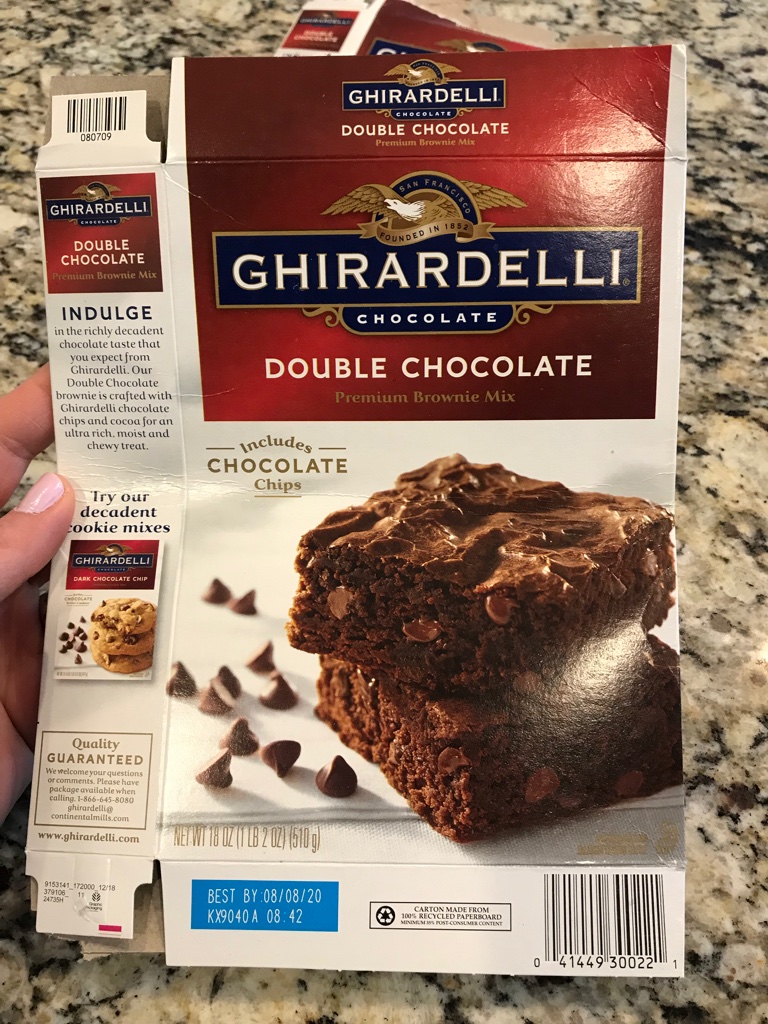 Bottom Layer
2 boxes of brownie mix
*Mix according to directions and pour into a 9×13 pan.
*Bake the minimum suggested baking time (I think mine was 39 minutes).
Mint Cream Center


2 cups powdered sugar
1/2 cup softened butter
1 Tablespoon water
1/2 teaspoon peppermint extract
3 drops of green food coloring
*Combine all ingredients.
*Beat until smooth.
*Spread mixture evenly onto brownies.
*Chill for about an hour.
(I only used a small amount of food coloring. I was taking these to a neighborhood party and didn’t want to weird everyone out by making it bright green! If I were to make these for St. Patrick’s Day, I’d definitely add more green.)
Chocolate Topping


6 Tablespoons butter
1 cup chocolate chips
*Melt butter and chocolate chips over very low heat.
*Stir until smooth.
*Cool slightly and then spread over the mint layer.
*Chill for at least an hour before cutting.
ENJOY!! 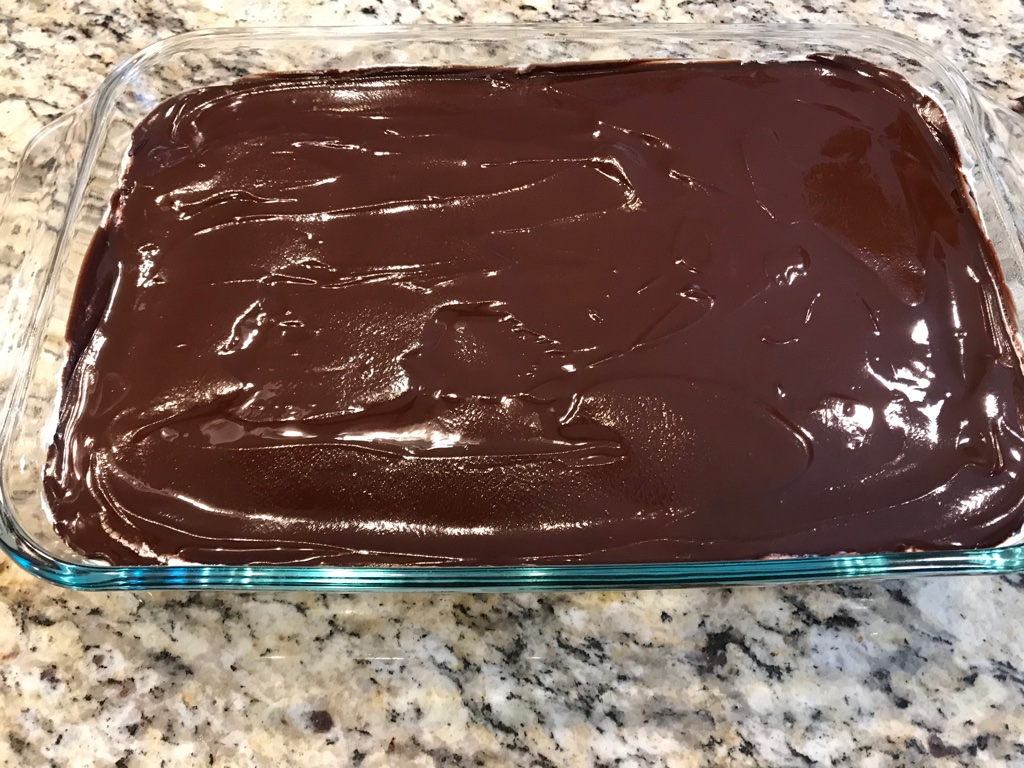 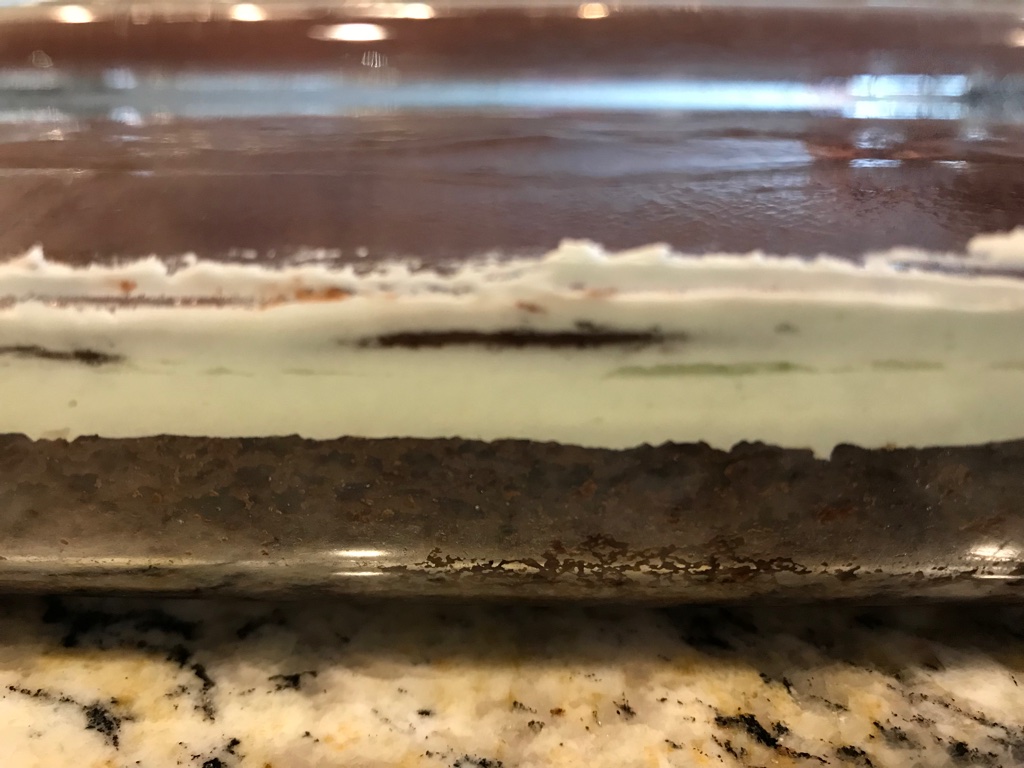 Lucy was very helpful when it came to cleaning the mint cream off the beater! 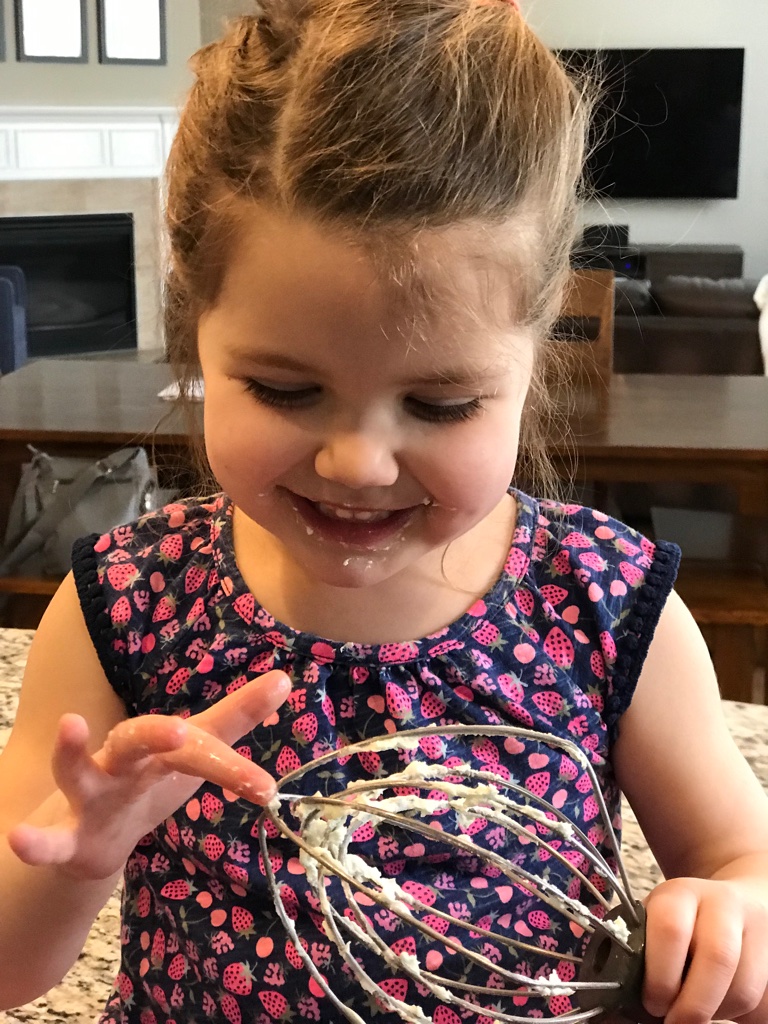 I really need to get a plain white plate to photograph desserts on! 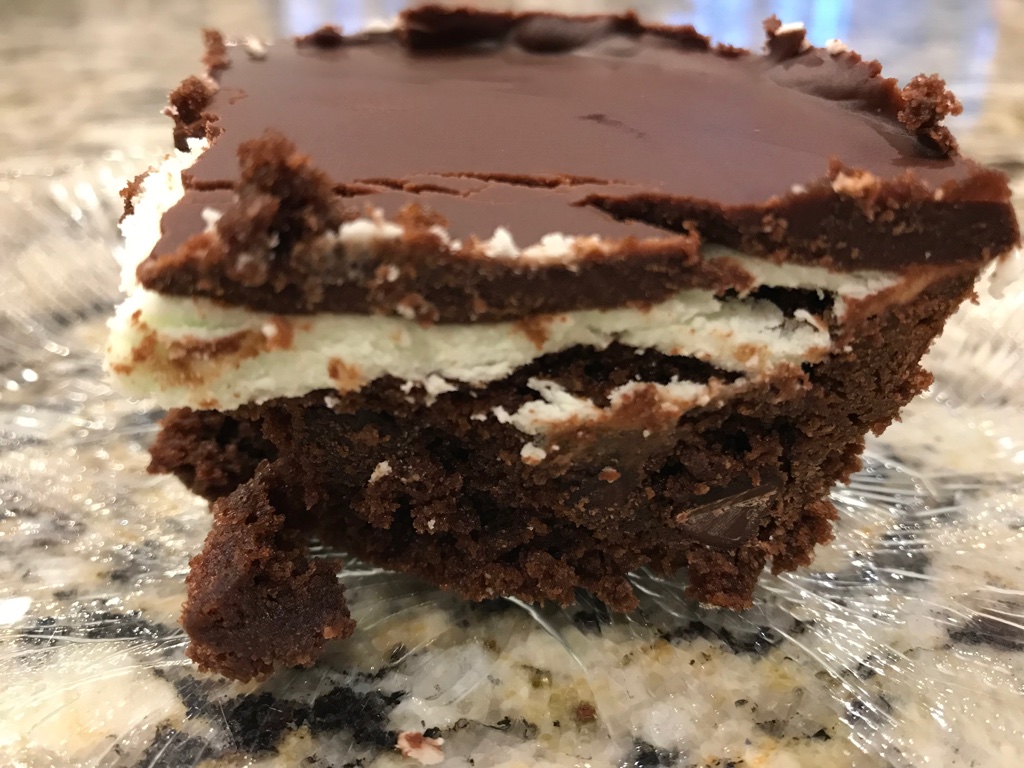 I was actually a little skeptical as I was making this, but it turned out great and was a big hit at the party!
And, of course, it wouldn’t be St. Patrick’s Day with kids without Lucky Charms! My girls were so excited to sort the marshmallows into different piles . . . and then eat all of them. 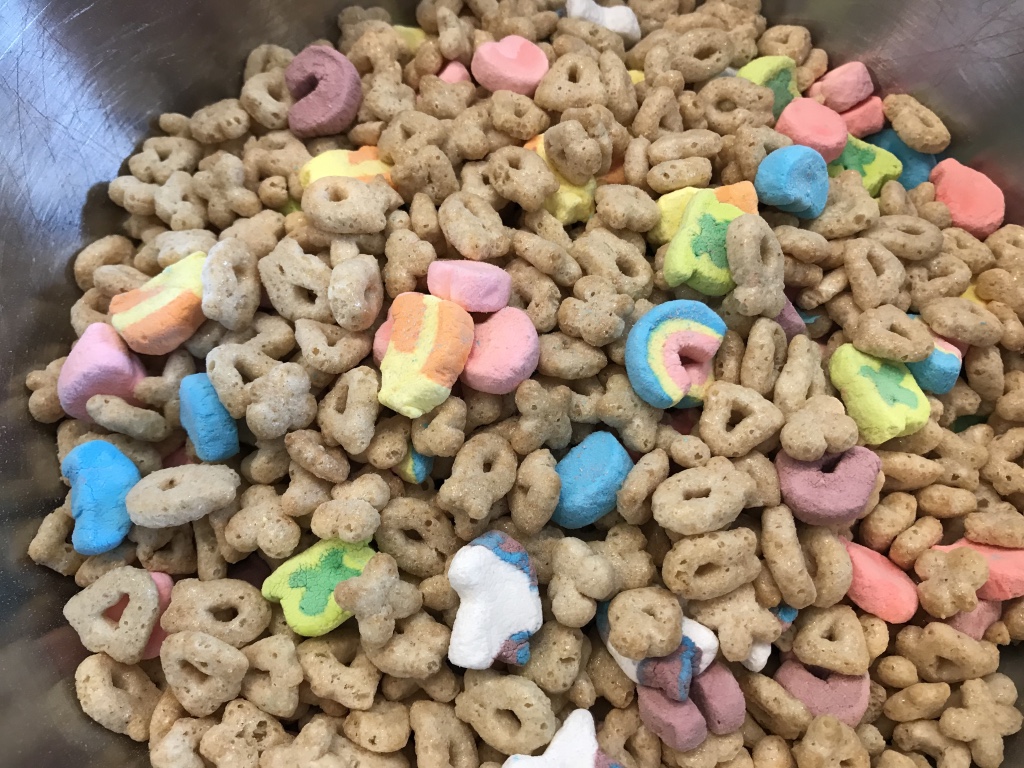 I mentioned last week that I made this sensory bin with dried rice and beans. 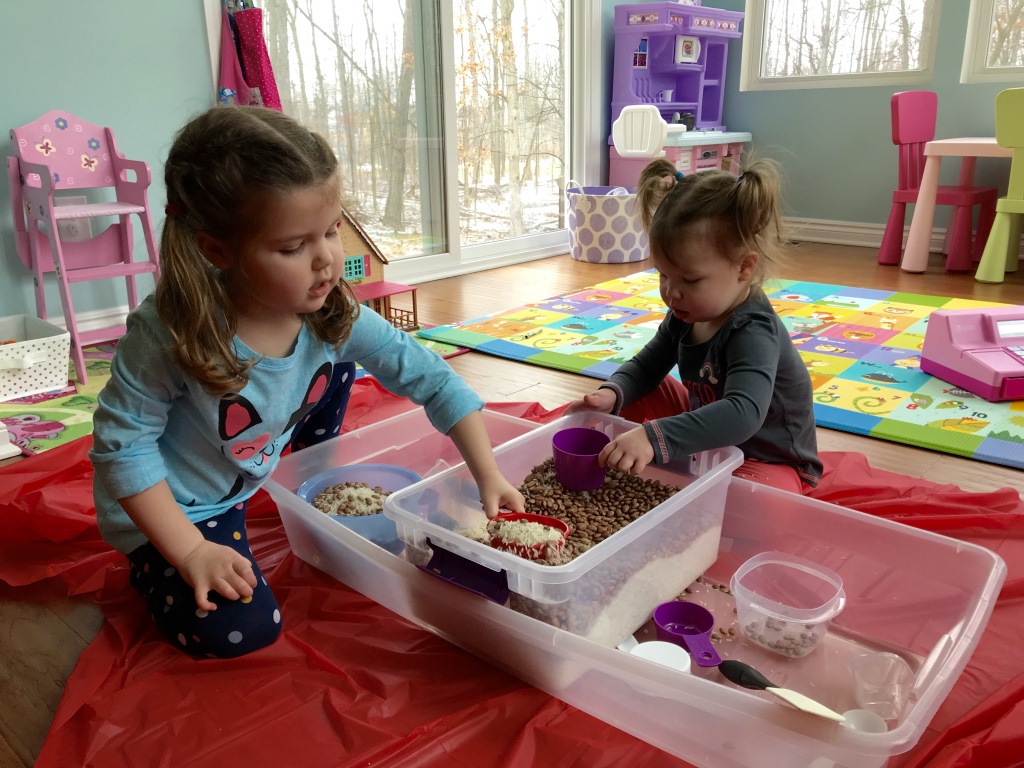 I added some Dollar Tree gold coins to make it more festive . . . 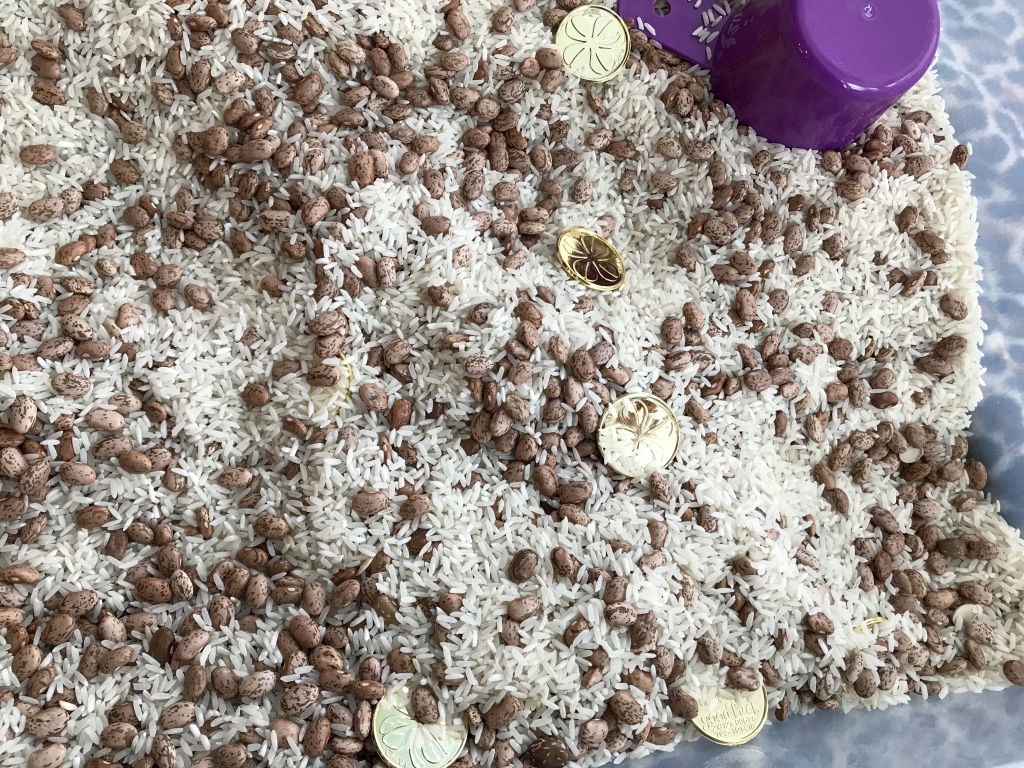 . . . and the girls were pretty excited about it! 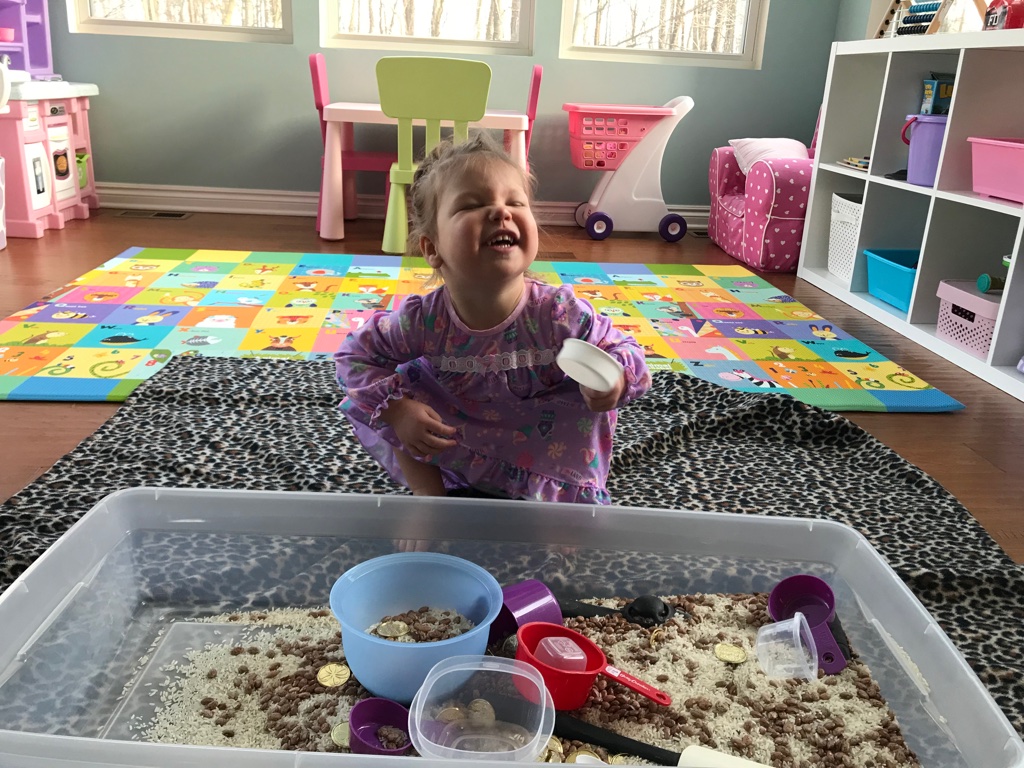 I also made this pot of gold at the end of the rainbow game to play with the girls.
Thank you, Pinterest!
Or, as my picture more accurately depicts, a pile of gold underneath a rainbow coming out of a pot. 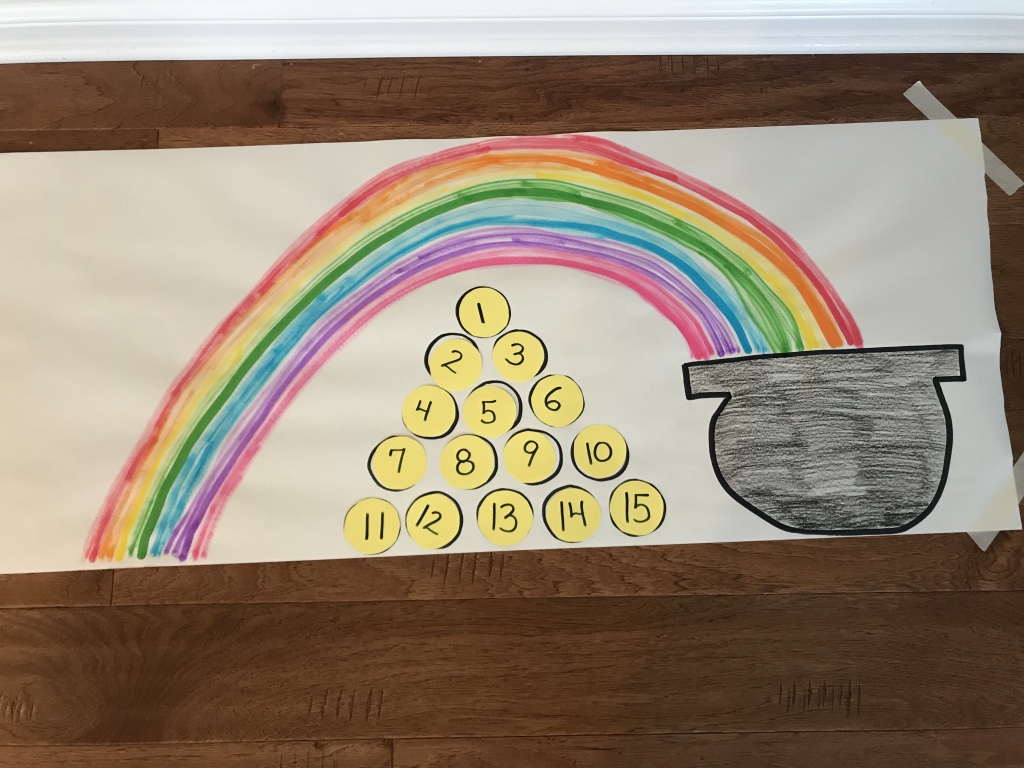 I take the gold coins and hide them around the living room, and then the girls find them and match them up with the circles underneath the rainbow. It’s been a pretty cute game to play! 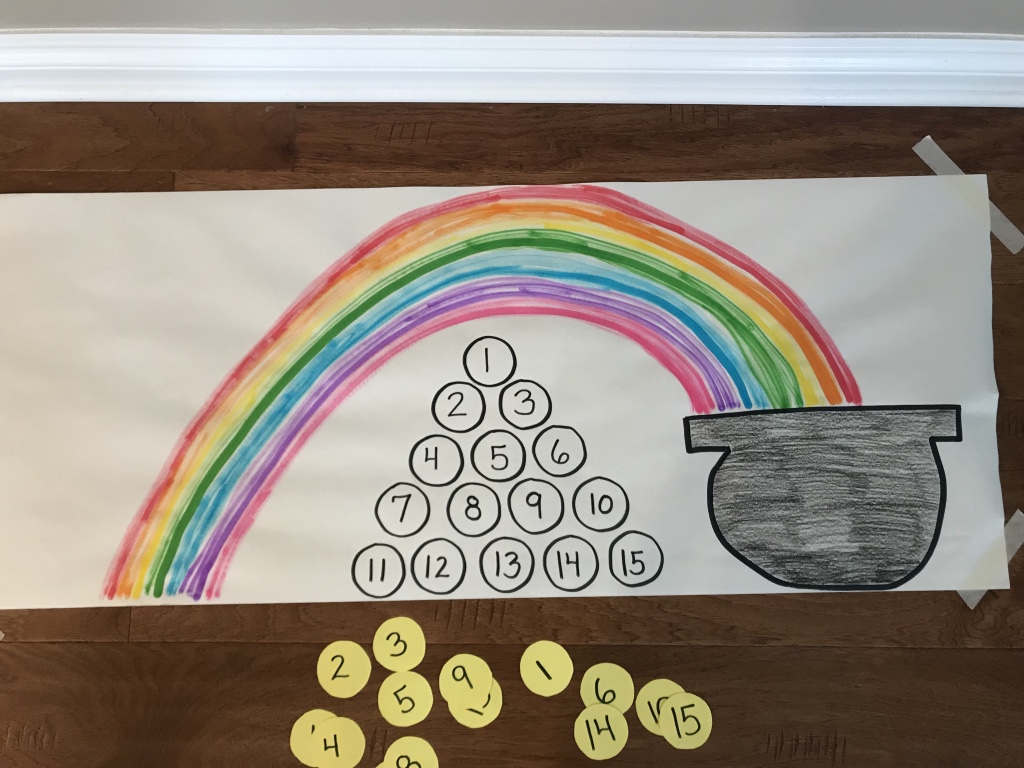 I usually pride myself on having an extensive collection of books for any given holiday, but I have definitely failed at this for St. Patrick’s Day. We only have ONE BOOK! To be fair, I did look at Target last week to see if I could grab one or two more, but they seem to have skipped over St. Patrick’s Day and moved right on to Easter. St. Patrick’s Day is like the middle child between Valentine’s Day and Easter . . . never gets enough attention!
Our one St. Patrick’s Day book is as authentic as it gets, though, because Rita brought it back for the girls from her trip to Ireland! It’s adorable, and the girls love it. As it turns out, Rita could have saved herself some plane fare and just looked on Amazon because I found our book there! 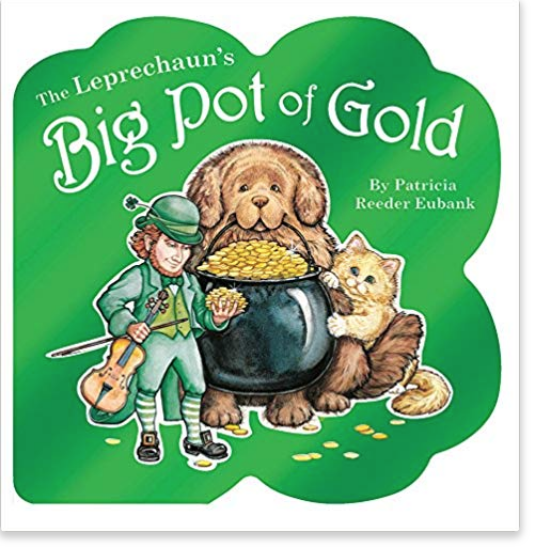 Hopefully you now feel inspired to incorporate a little St. Patrick’s Day into your days next week!
I hope everyone has a great weekend.
It’s looking like these two cuties are going to be spending another night at my parents’ house! 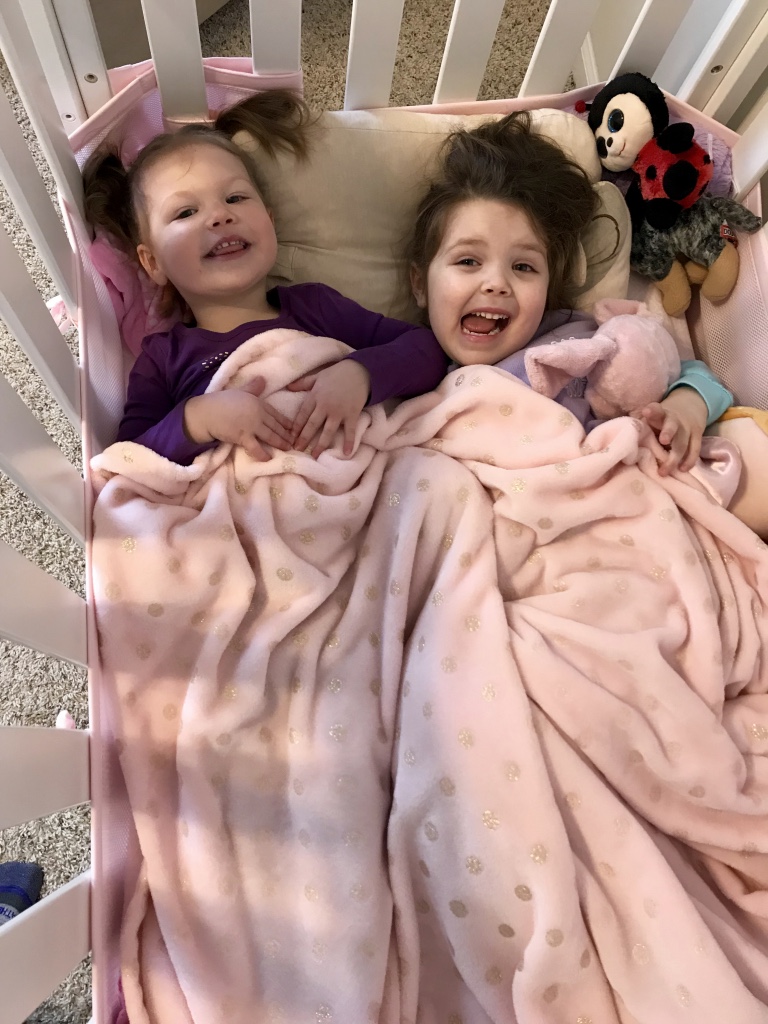 We’re going out with friends down near my parents’ house. It’ll most likely be a late night, but rather than join the girls at my mom and dad’s afterward we’ll be staying at Matt’s mom’s house instead . . . even though she’s out of town!
I feel like that’s what most tired parents would choose to do, right?! We certainly don’t want to disrupt the girls by arriving home at my parents’ house at a late hour. So, really, it’s like we’re helping my mom and dad out. 😉
XOXO