And we saw our neighbors again!
Everyone seems to have survived the winter, but don’t think we all didn’t stand out there and share our tales of woe regarding the illnesses that took everyone out from November til now.
The girls have been using books to go “ice skating” around the house. It’s the cutest thing ever. I’m not sure how good it is for our floors, though. I don’t think Matty has seen them do it yet, so he might have something to say about it after he reads this post! Snuggle time in their snuggie tails! 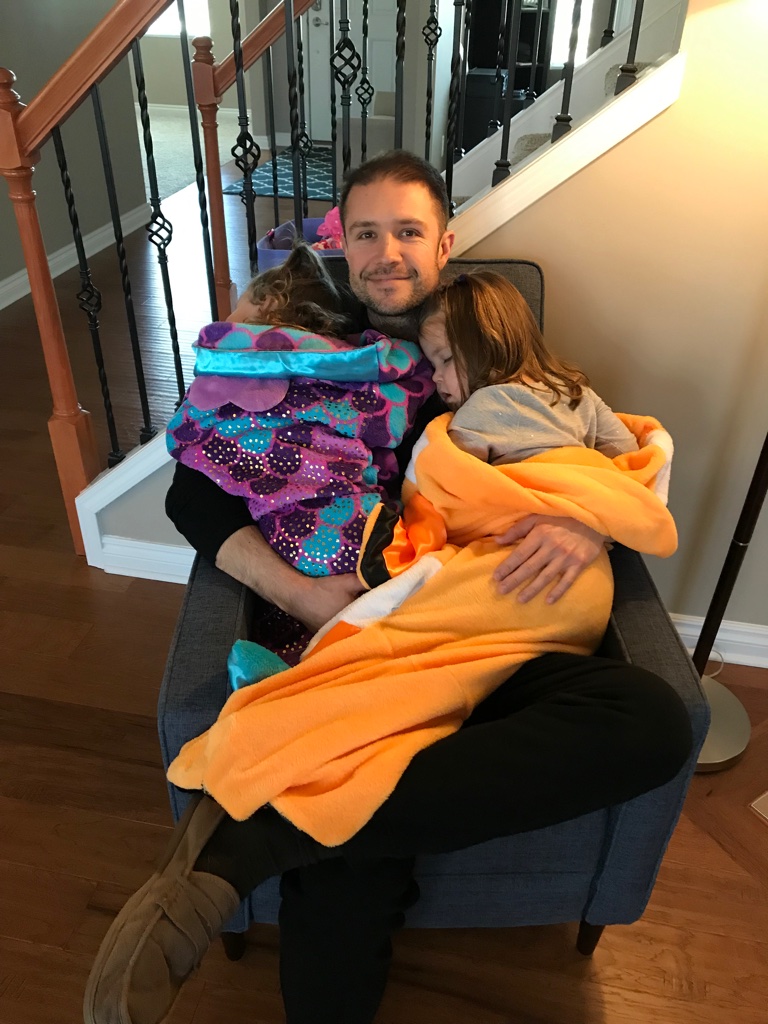 So ever since Emmy had a cold almost a month ago, she’s been going through some sort of weird sleep regression. She cries for me at night, wants me to hold her, and constantly wants us to re-cover her up with her blankie. So . . .since she was already sleeping pretty poorly, I decided it was time to get rid of the paci! Matty kind of looked at me like I was crazy, but I figured since I was already getting up several times a night we may as well just get it over with.
I’m happy to report that Emmy is doing GREAT! There was minimal to no fussing, and she seems to have totally accepted the fact that the Paci Fairy came and took her pacis to give to little babies who need them. In fact, she keeps saying that the paci fairy gave her pacis to Ellie Belly (my friend Marie’s baby), so . . . here’s hoping Emmy doesn’t take Ellie down and steal her paci’s back next time we see her!! 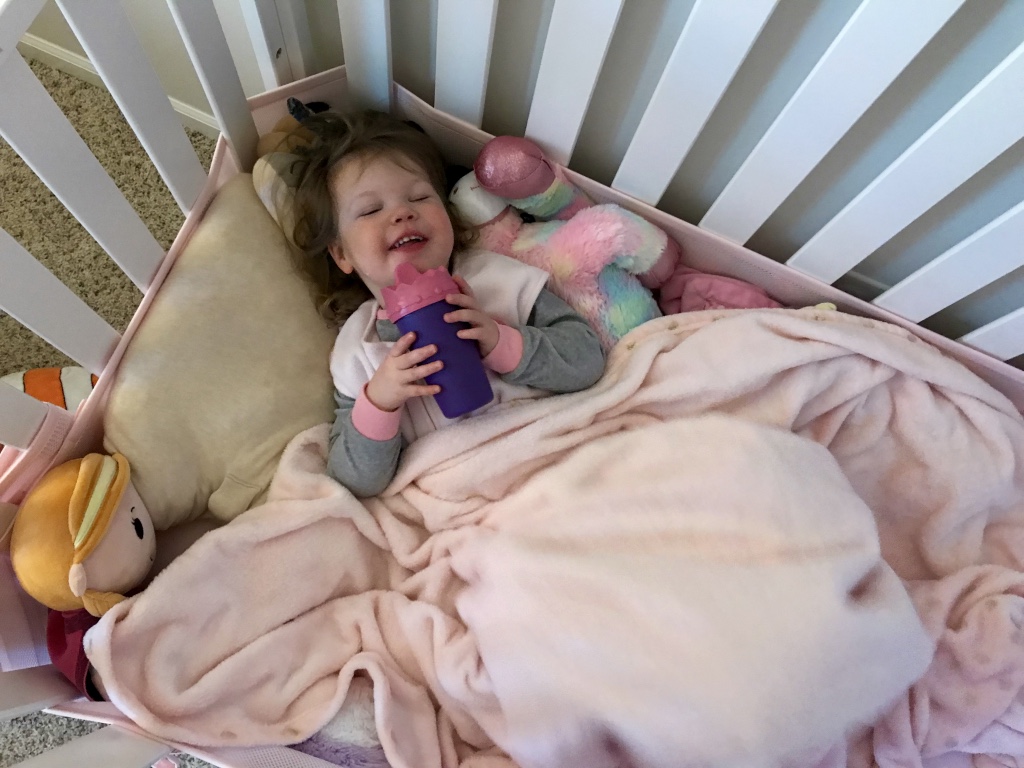 I did some cleaning while Lu was at school on Tuesday. Emmy planted herself on our bed to watch “Mr. Grinch” and do some puzzles. She’s wearing her Fancy Nancy dress that leaves sparkles EVERYWHERE. Tuesday night I went to climb into bed and realized she had been sitting right on my pillow and there were sparkles all over my sleeping spot. I considered the time it would take to change my pillow case and vacuum off my sheets versus just climbing into bed and passing out. I chose the latter. Motherhood has made me weak! 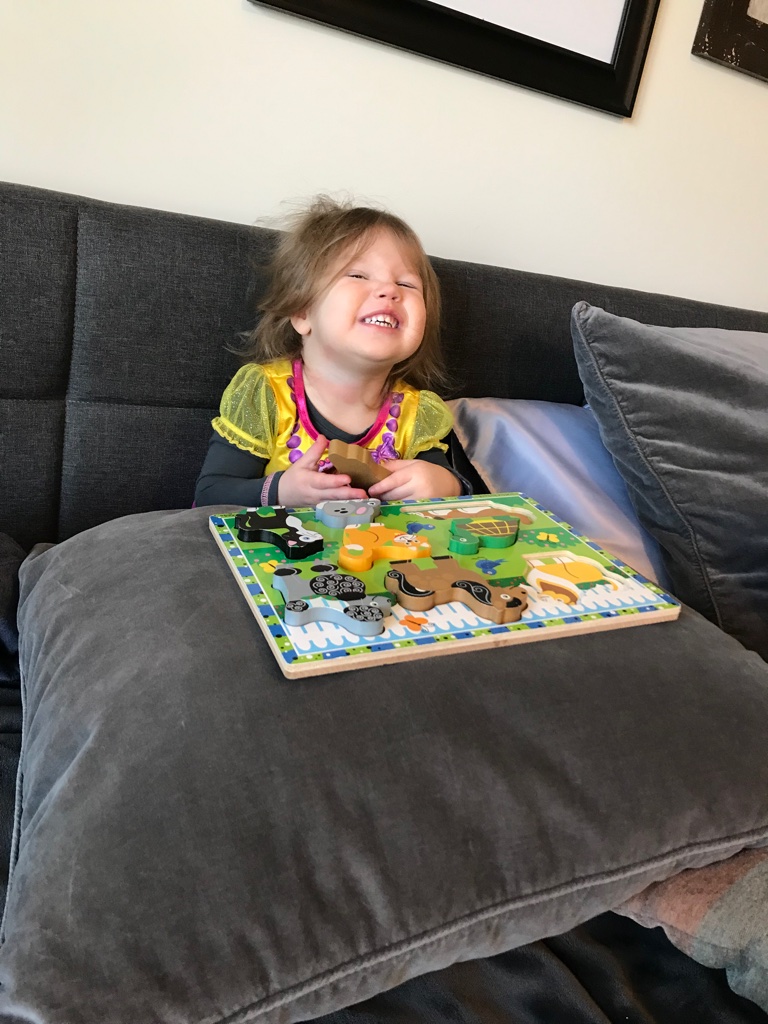 We picked Lulu up from school on Tuesday and didn’t even go in the house. It was so nice out that we got right to playing! 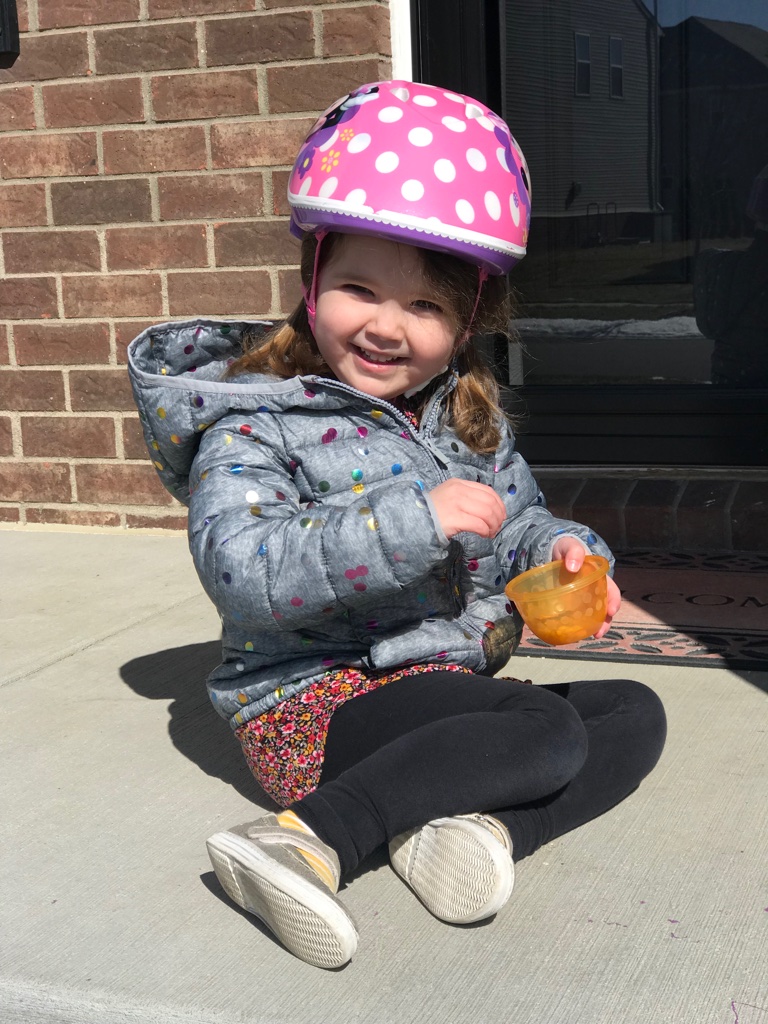 We bought this tricycle from a garage sale when Lucy was the age Emmy is now. Lucy hopped on it and started pedaling right away, so I kind of expected Emmy to do the same. Nope! I’ve spent a lot of time hunched over trying to help her out, but it just hasn’t clicked yet. She loves it though, and was not too pleased when I had to stop pushing her so I could take this picture. 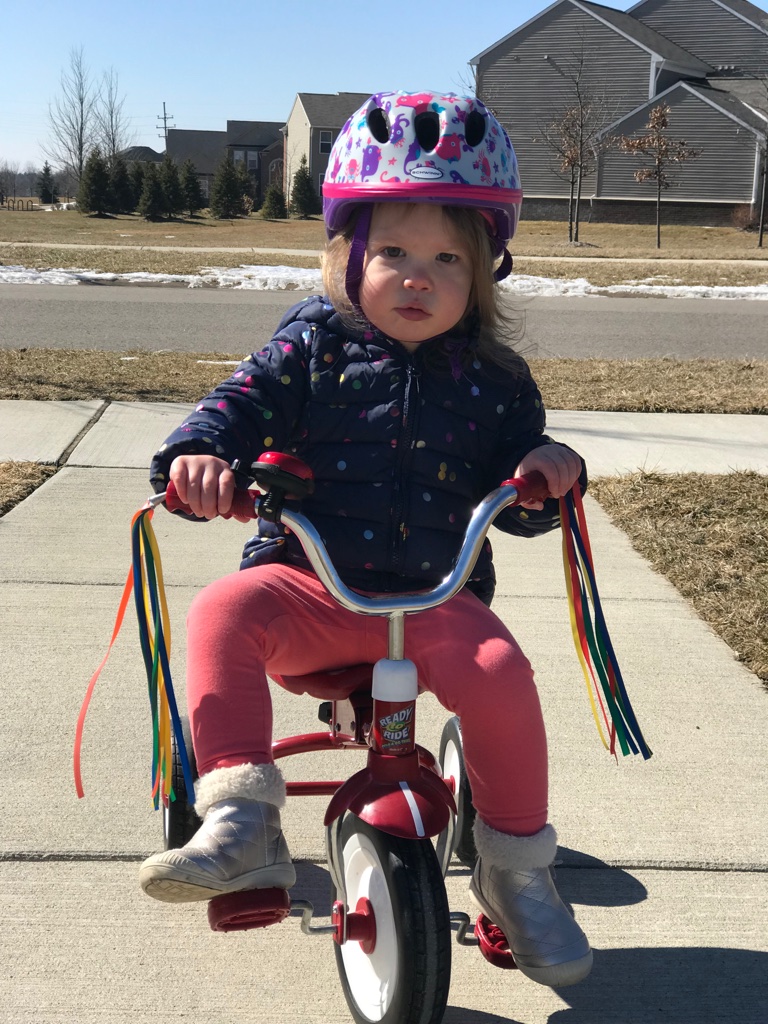 Pre-bedtime shenanigans while watching Fancy Nancy. She knows I don’t like it when she sits up there! 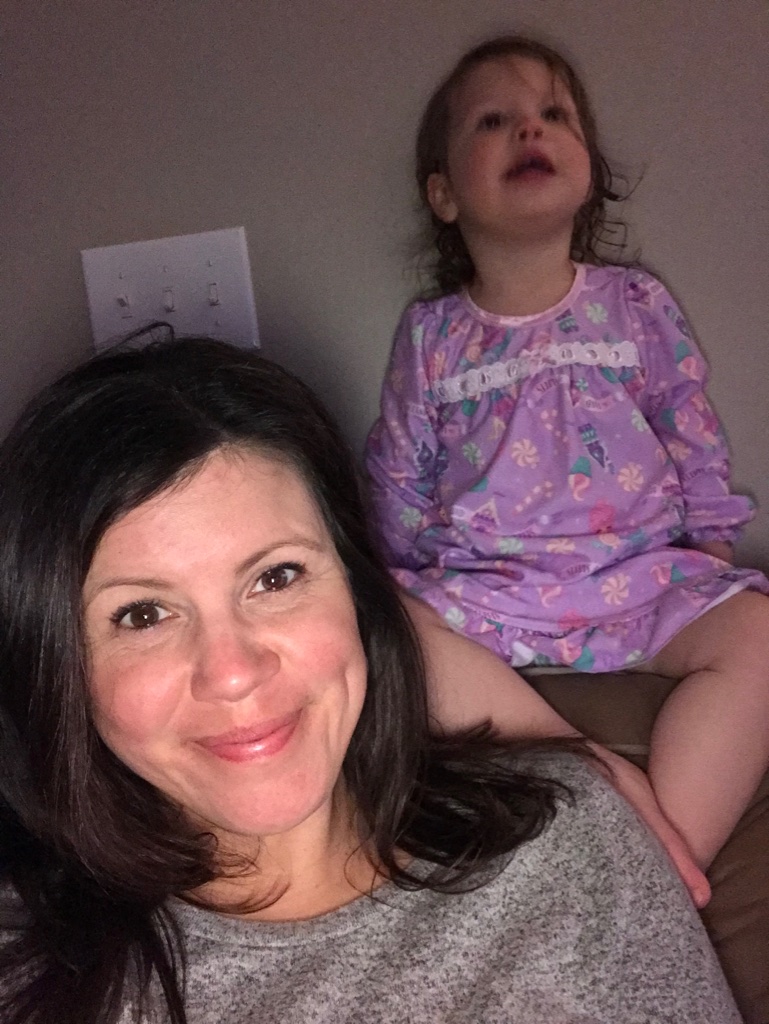 We were doing some baking and Lucy told Emmy that she had to “put her hand on top of the mixer just like mommy does.” Melt my heart! 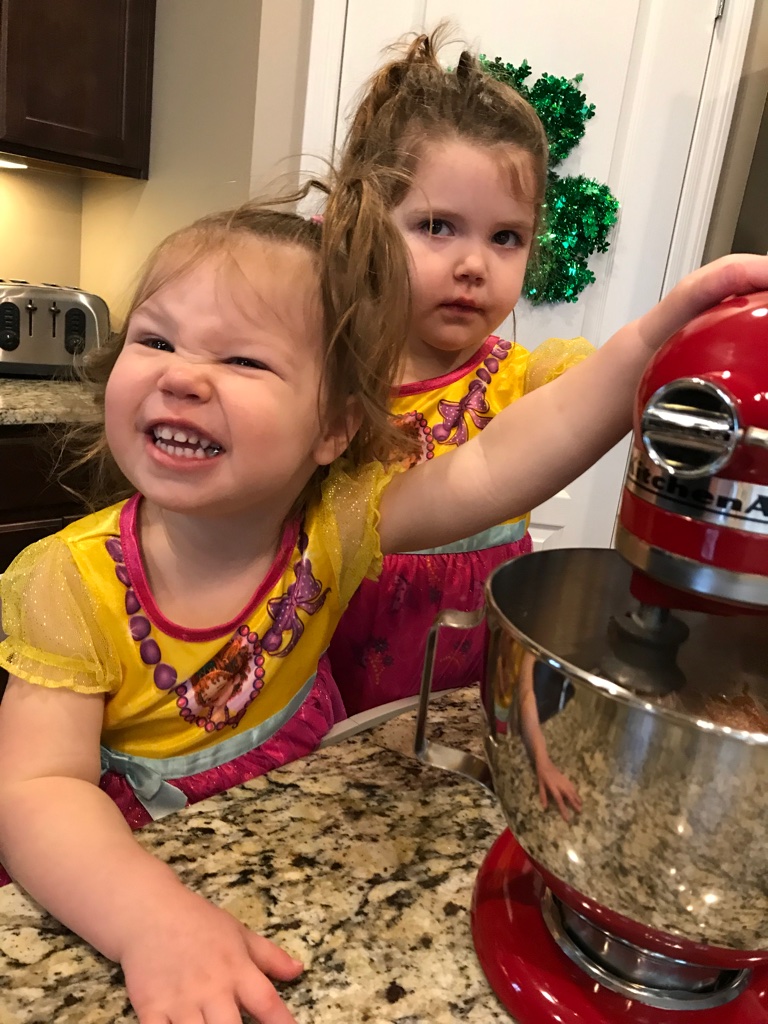 Lucy developed a bit of a cold throughout the day on Tuesday, and when Matty was giving her a bath in the evening he noticed a few hives on her chest. We gave her some Benadryl and put her to bed, and she woke up early Wednesday morning covered in hives! I’ll spare you the pictures, but trust me when I say it wasn’t pretty. The doctor thinks it’s probably some sort of viral infection that has manifested itself as hives. Yuck! She does pretty well as long as she has Benadryl in her. She can take it every six hours, and right around the five hour mark the hives start coming back with a vengeance, her fever spikes, and she gets super itchy. Unfortunately, the way the dosage works, we’ve been having to wake her up around 11ish to give her another dose of medicine which is no easy task. That girl can sleep!
Anyway, Wednesday before lunch we sat down on the couch to watch The Incredibles for a bit, and ended up watching the whole movie in one big long cuddle session . . . and that never happens! I was surprised at how long Emmy laid on top of me! 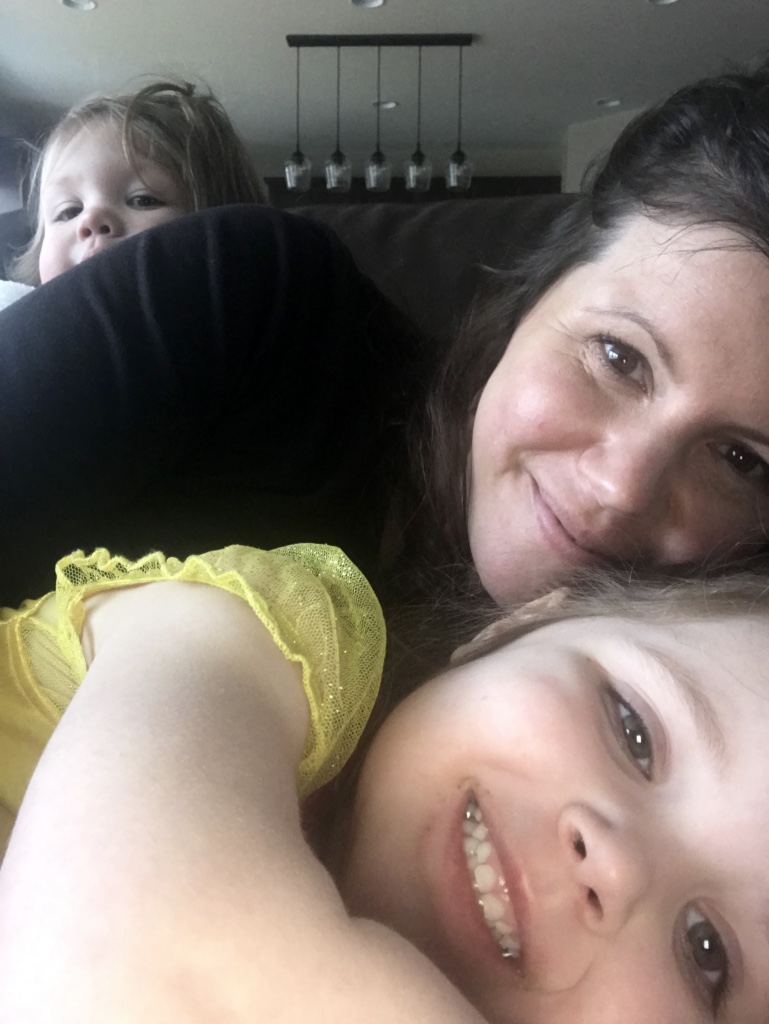 And finally, Google Photos strikes again! It sent me this comparison pic of the girls. I wish they were on the same sides in both photos, but life isn’t perfect. Time needs to sloooow down, that’s for sure! I cannot believe Emmy is going to be TWO in a few weeks! 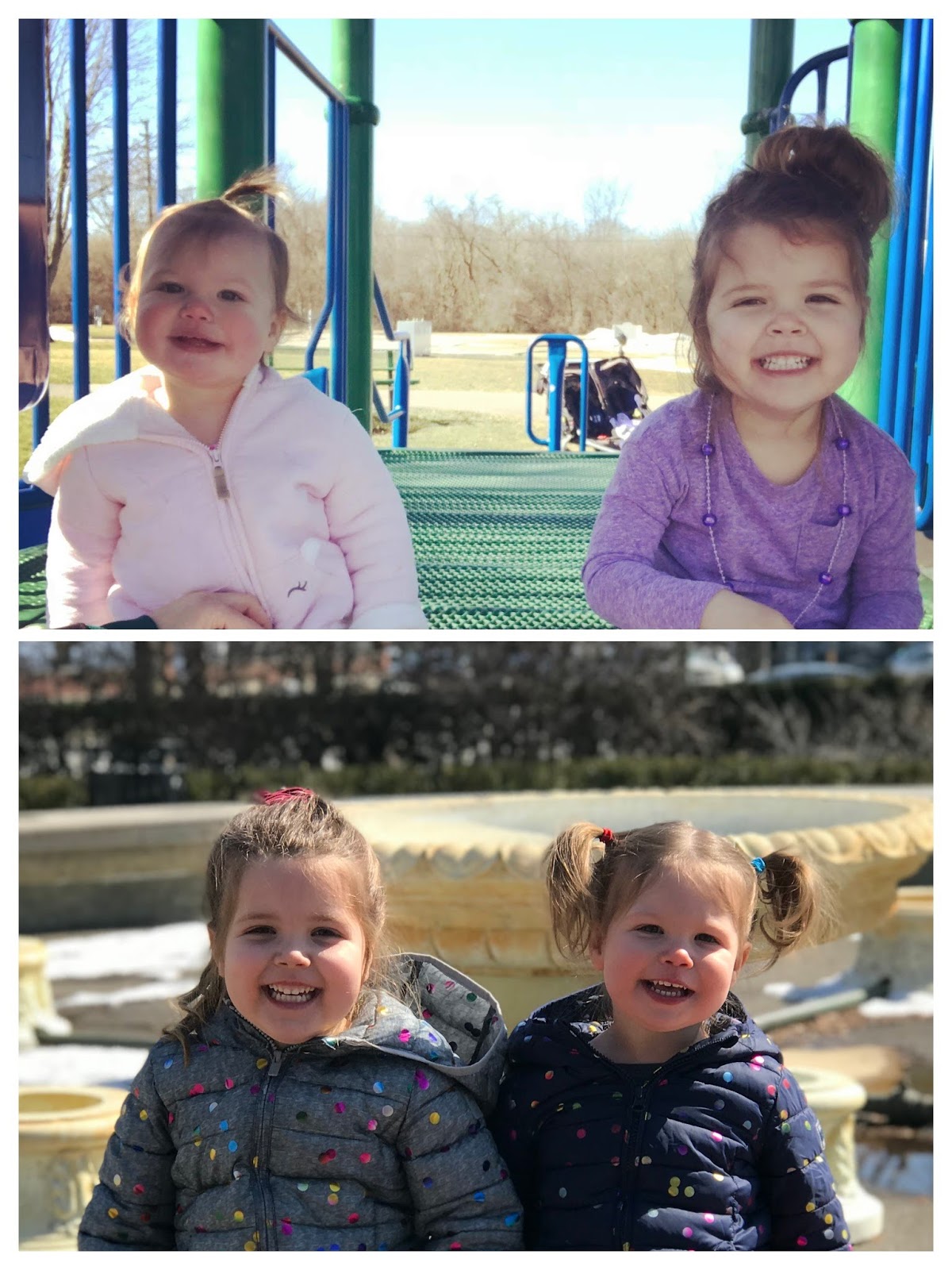 We don’t have any super exciting plans this weekend except to hopefully finish it out free of hives!
Oh, and Matty is going to start painting Lucy’s room which will be more exciting when it’s finished than the actual process of doing it. We’ve got big plans to give her a “big girl” room, and I sure hope she loves it!
Oh! And it’s St. Patrick’s Day on Sunday! There most likely will not be any green beer, but I’m sure
there will be Lucky Charms at breakfast and hunting for gold coins as our activity. #momlife
If you’re looking for a last minute dessert idea for St. Patrick’s Day, be sure to check out my recipe for Mint Chocolate Brownies.
Have a great weekend!
XOXO