TGIF!!
or
TGIFAZD!
(Thank Goodness It’s Finally Above Zero Degrees!)
We’ve been hunkered all week, folks, and we ended it with a bang! Unless you’ve been living under a rock, you may have heard that we had a record breaking week of low temperatures here in the Midwest. And “low” is putting it mildly. We’re having a heat wave today, though, with a high temperature of 14 degrees! Bust out the tank tops and shorts! 😉
Honestly, most of the days of our week are blending together, but I’ve done my best to put them in a somewhat logical order.
Lucy and Emmy have really been enjoying playing “nap time” lately. They take turns putting one another down for naps, and it’s really sweet. On this particular day, Lucy climbed into Emmy’s crib to play, and she was loving it. 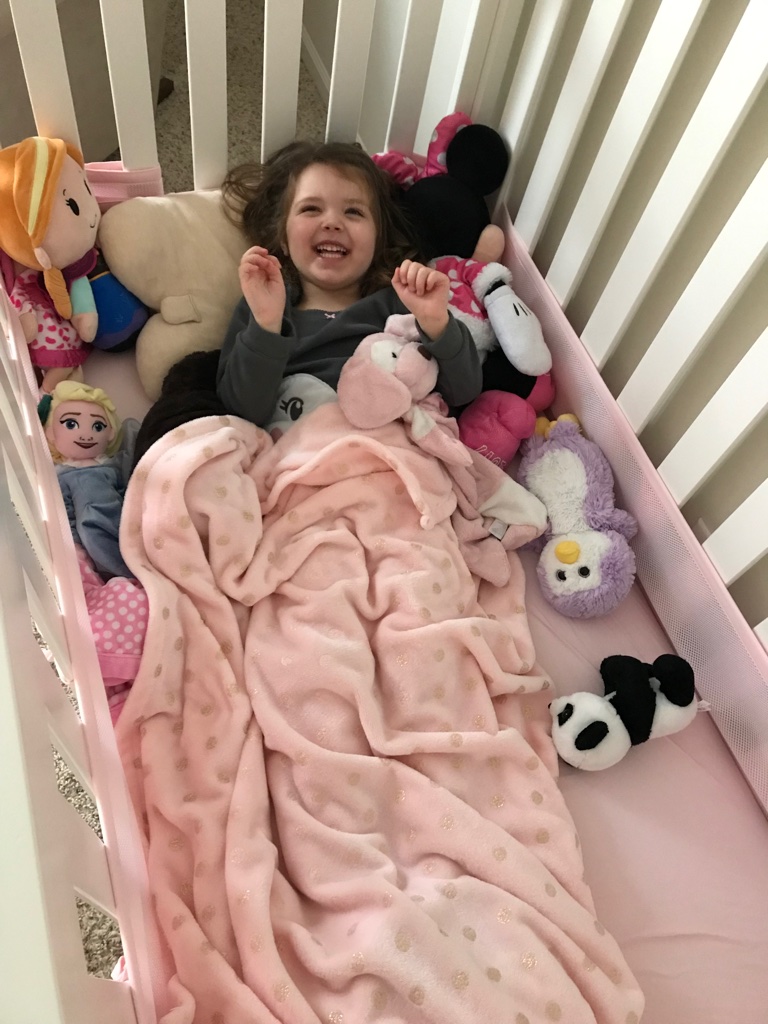 Emily has had a pretty decent cold this week. She woke up really fussy on Monday and didn’t even want to eat . . . all she wanted to do was snuggle. 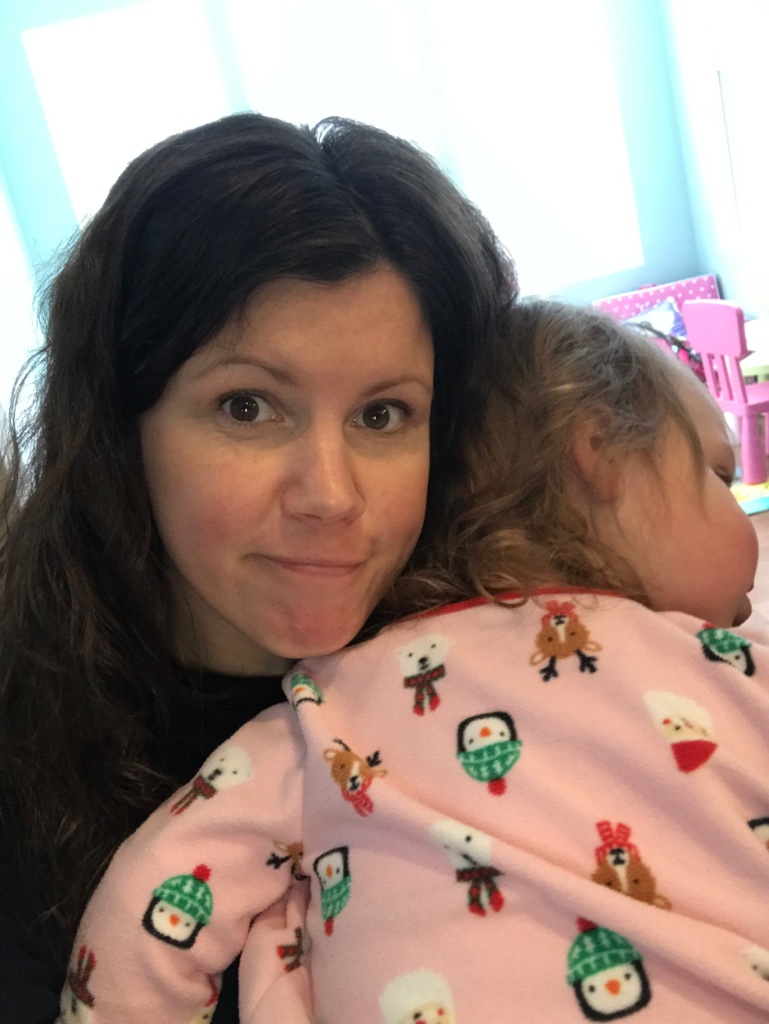 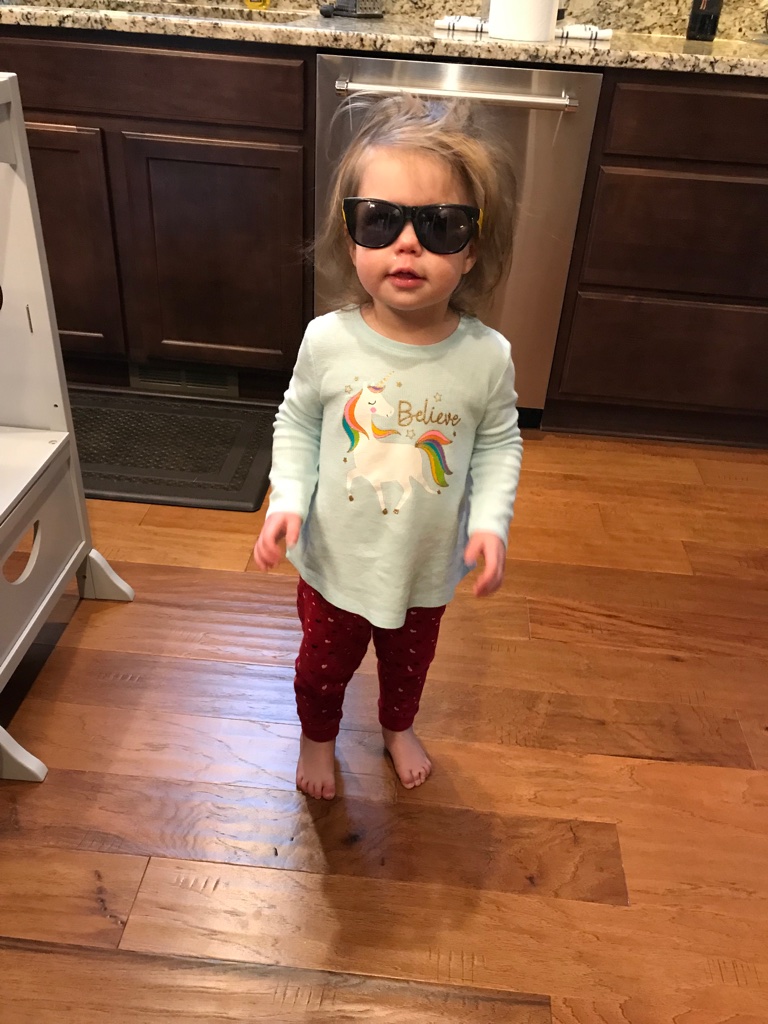 She was hamming it up for me while we waited to pick up Lucy up from school on Tuesday. 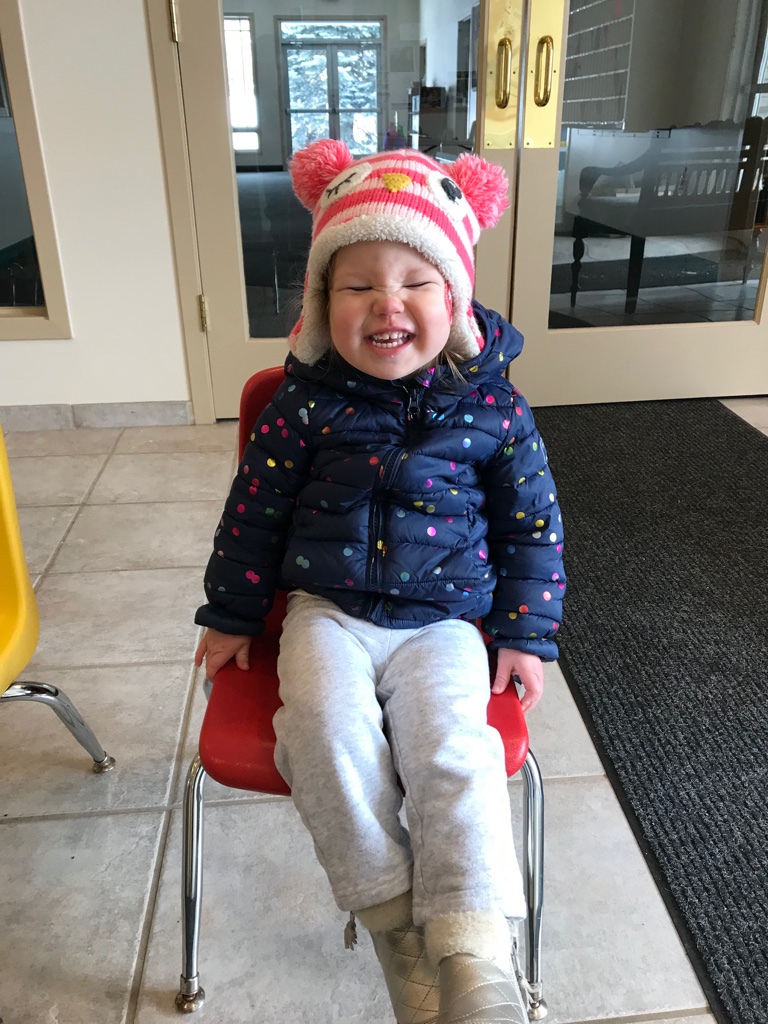 We went to Target, and I couldn’t resist this adorable unicorn bathing suit for Emmy . . . 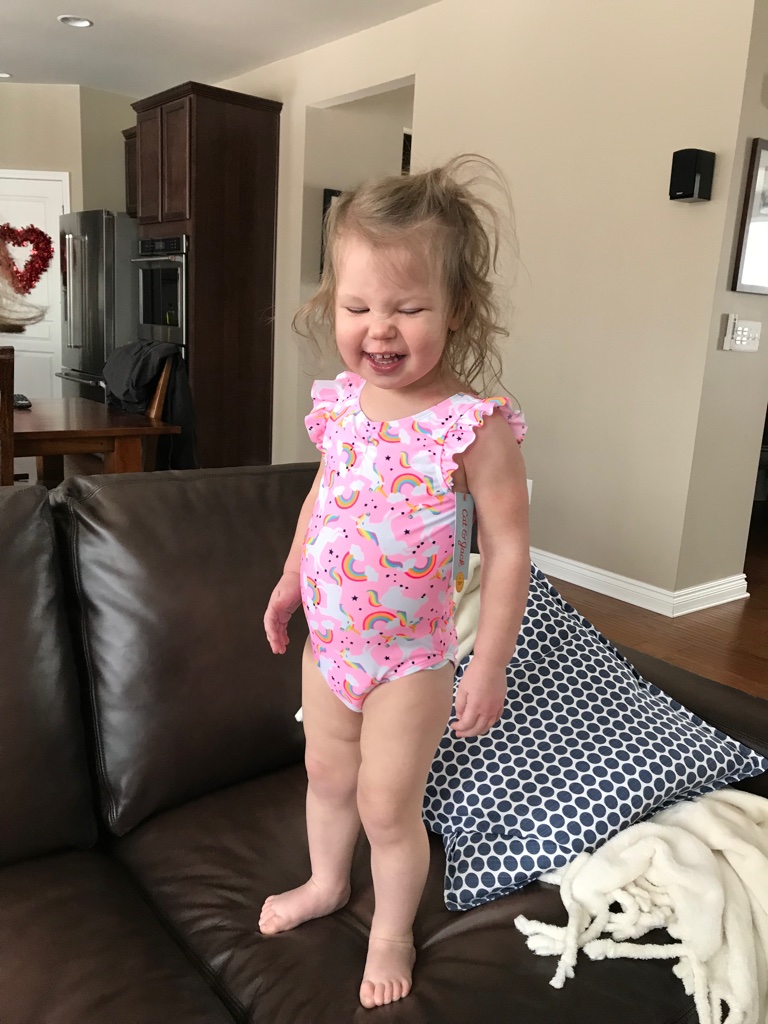 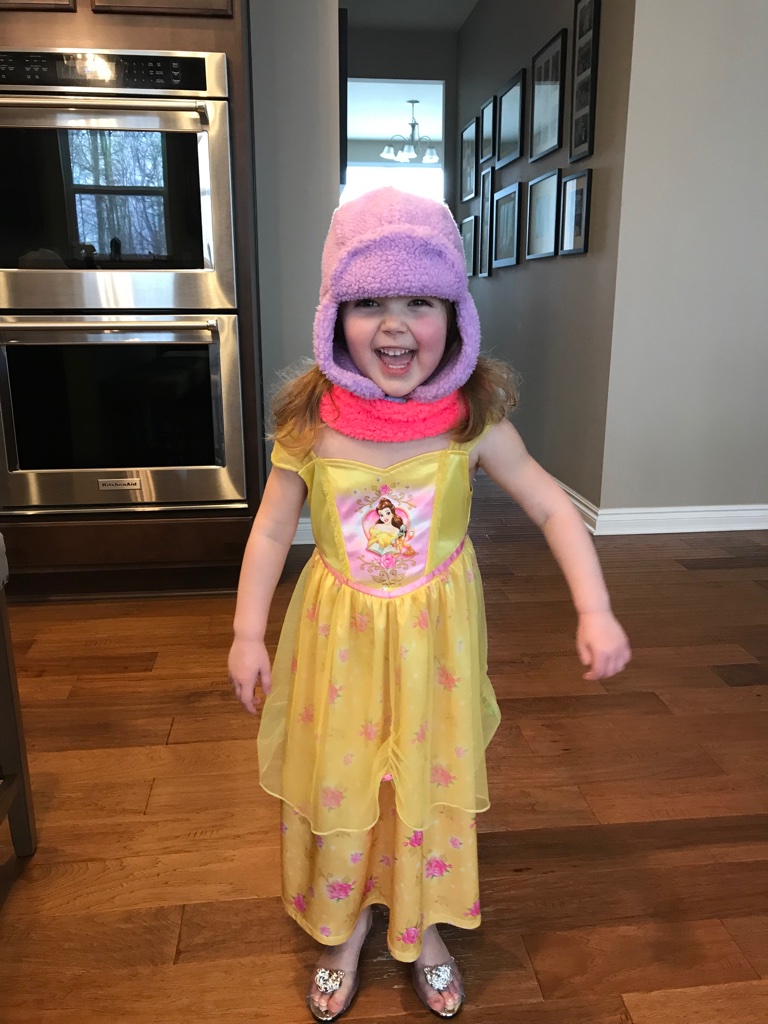 By Tuesday afternoon schools had already been called off for Wednesday AND Thursday, and I knew it was going to be a loooong couple of days. This was 9am on Wednesday, and we were already scraping the bottom of the barrel of ideas for what to do.  😉 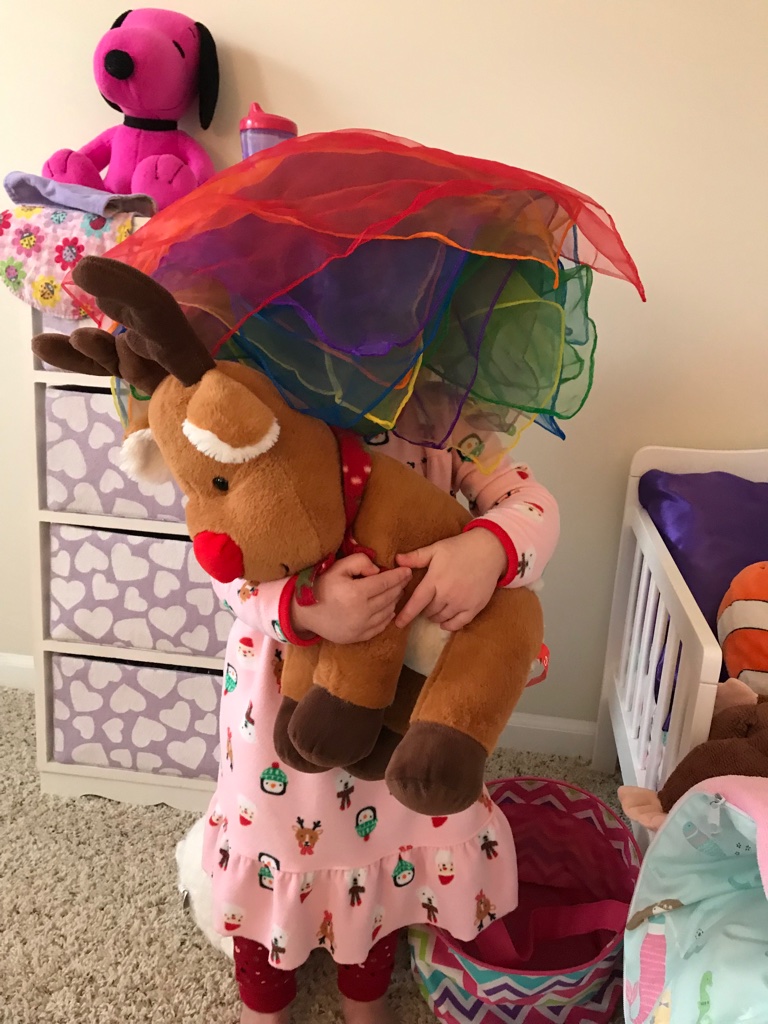 The girls set up an airplane in the playroom and “packed up” all of the toys to take on the plane. 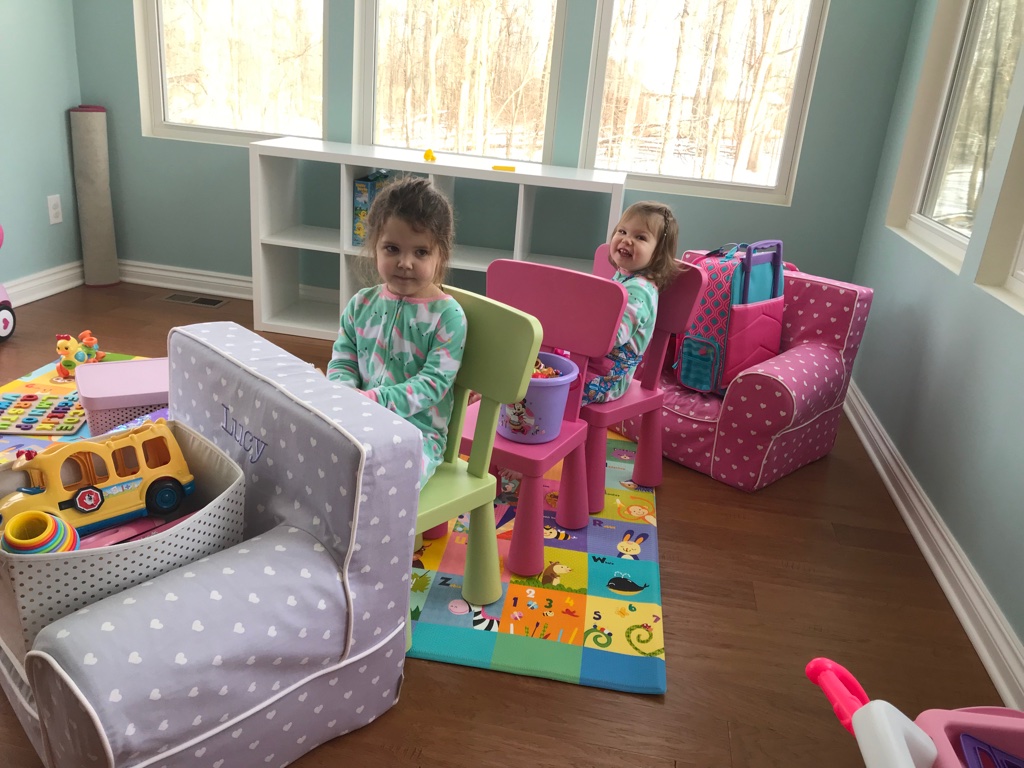 Since the toys were already pretty much packed up and out of the way, it seemed like as good a time as any to deep clean the playroom and rearrange a bit. 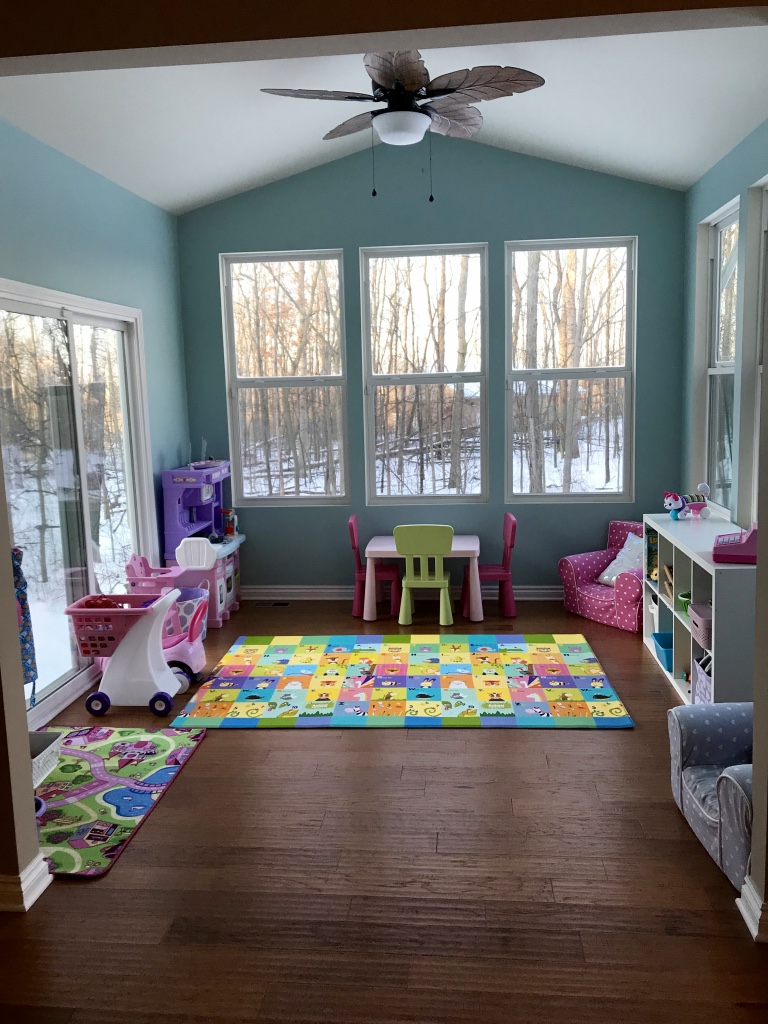 While Emmy napped, Lucy and I vacuumed and mopped . . . 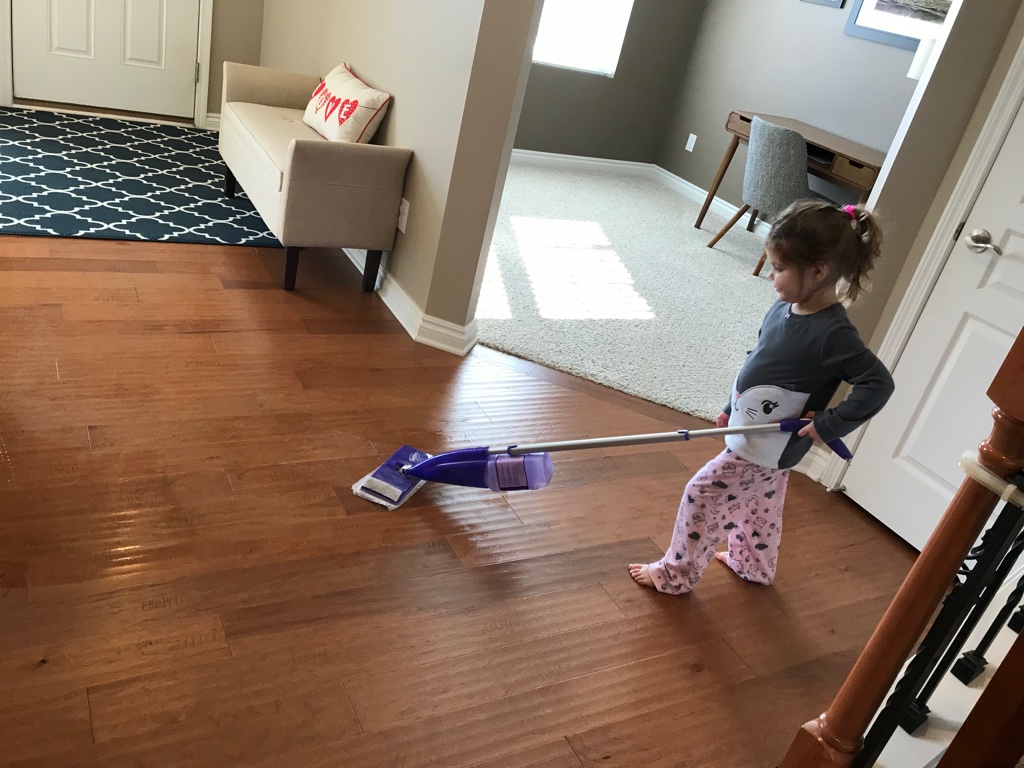 . . . and played Candy Land for the first time! 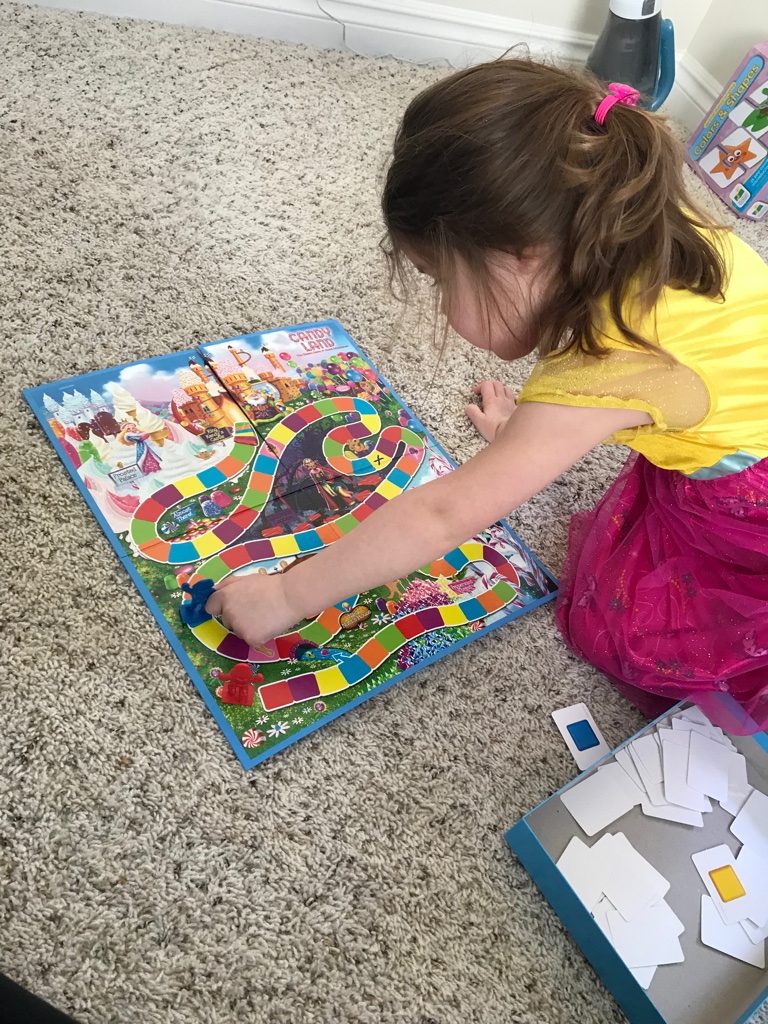 I got a rare sighting of a sleeping Emmy at the end of nap time. She is the lightest sleeper ever and always wakes up when I open the door to her room . . . not on Wednesday, though. Look how sweet she is! 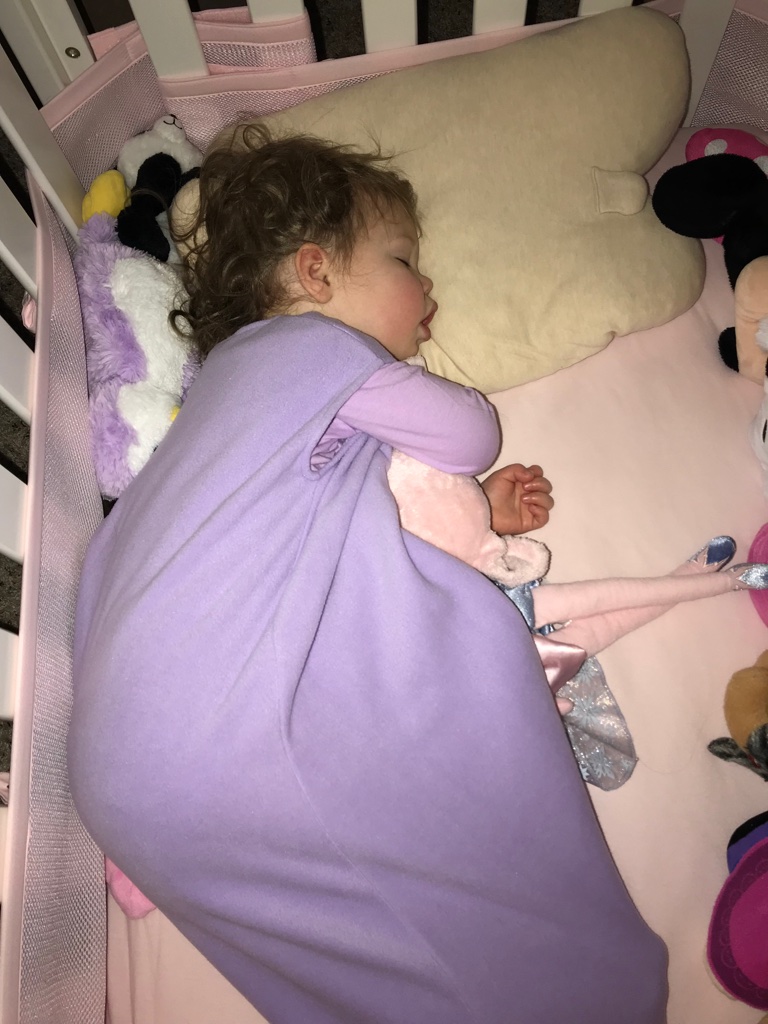 I woke up early to work out on Thursday morning, and it was only 55 degrees in the house . . . even though we had it set at 68! I worked out and then went up to shower. It was even colder in the basement, so I was chilled to the bone and ready for a hot shower . . . but the water was lukewarm at best. Matty woke up and tried our fireplace and gas stove and nothing was working right . . . then our furnace completely turned off! Nooo! 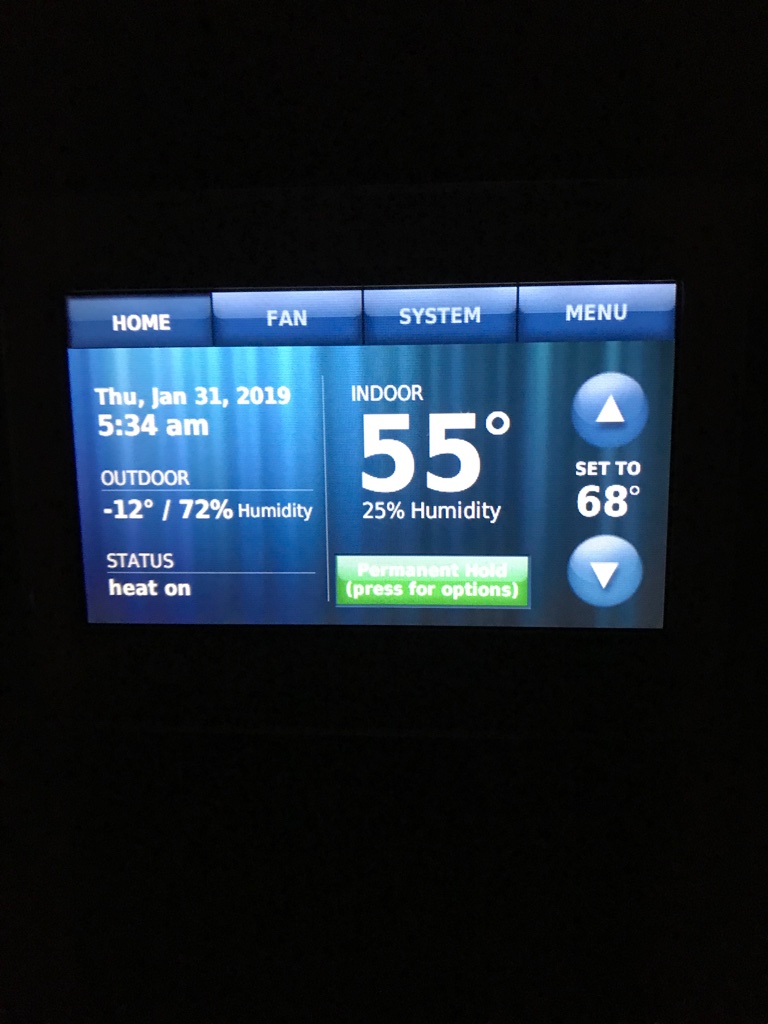 Thankfully, Matty handled the furnace situation while I quickly finished getting ready and packed a bag for the day and night (if necessary). We were going to stay with my parents, and by the time I woke these little ladies up to load them into the car, it was 51 degrees in the house! They were excited for an early morning adventure, though. 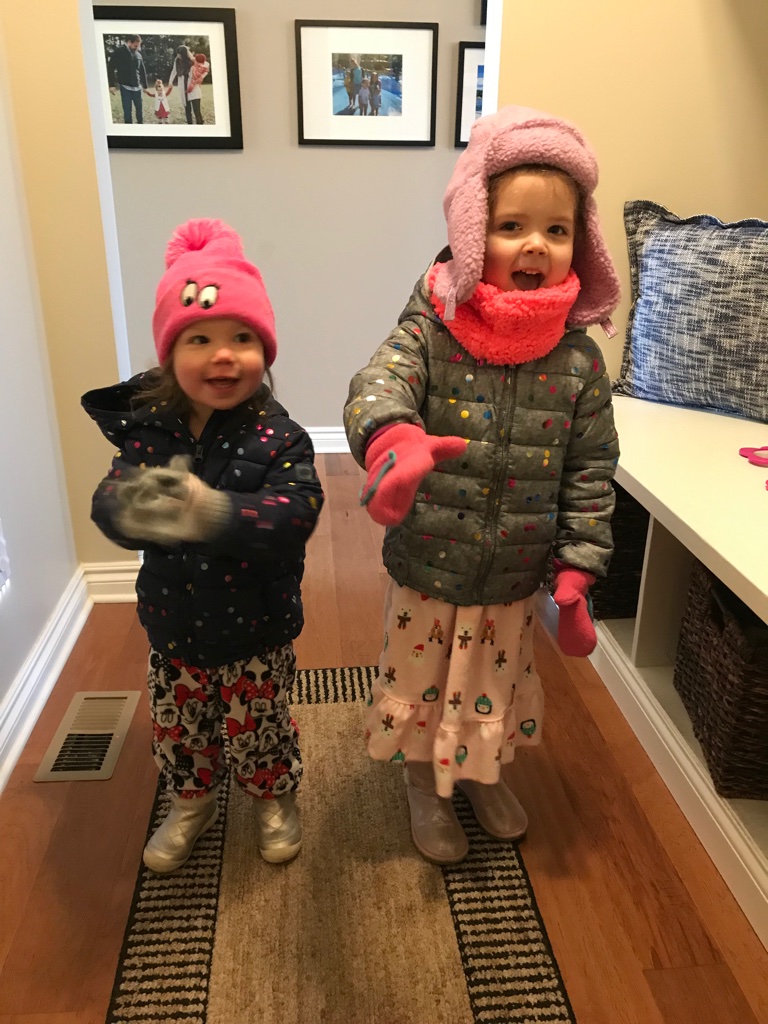 The temperature was -14 degrees when I was on the way to my parents’ house! 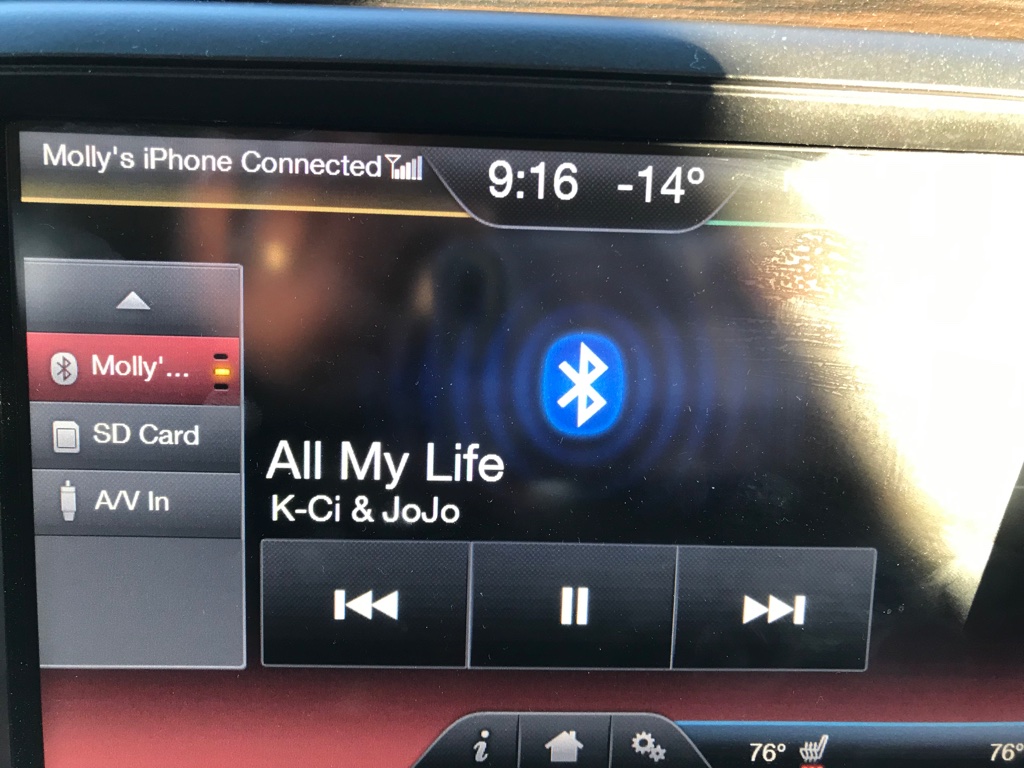 Emmy got lots of snuggles while we were there. 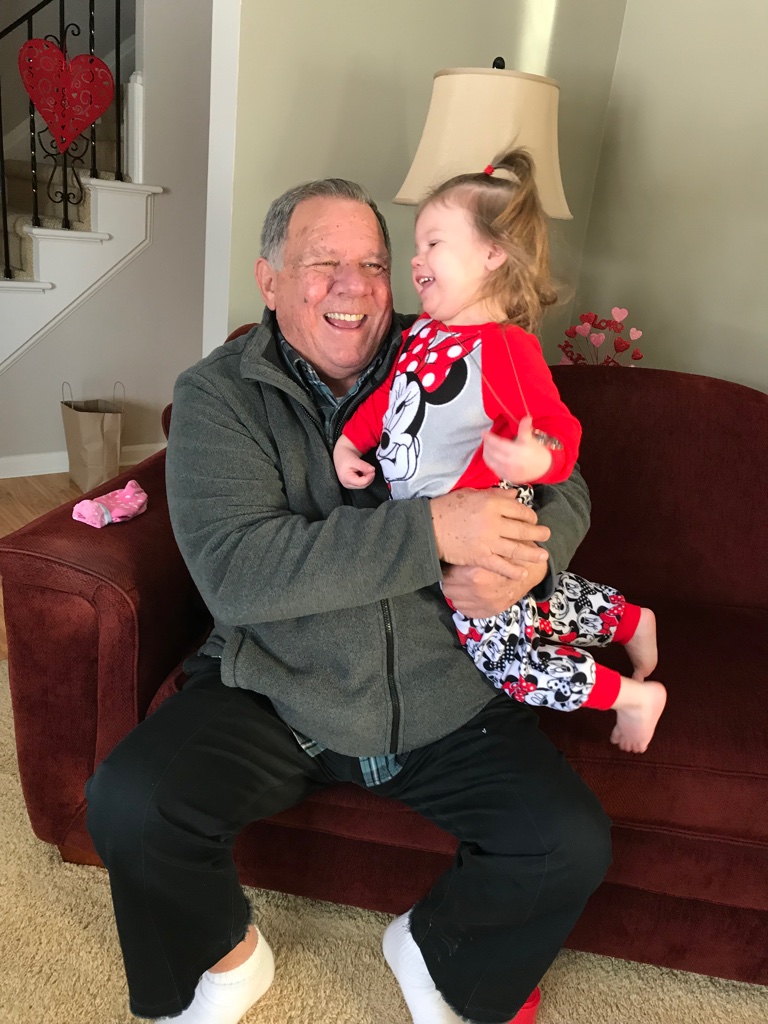 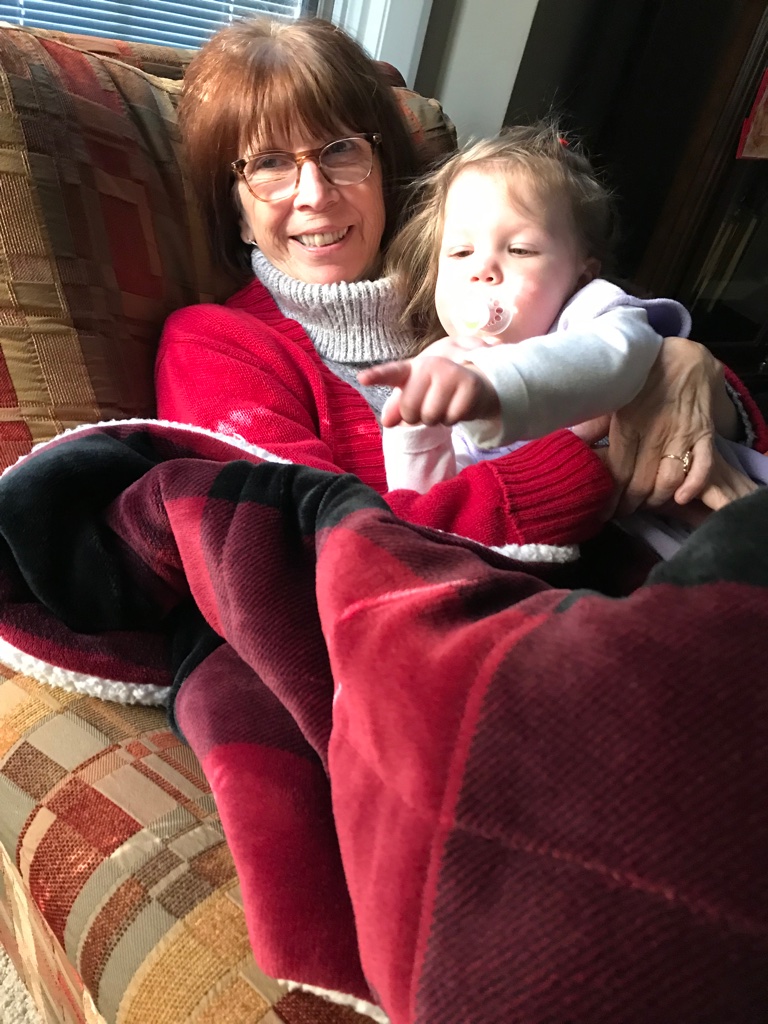 In the meantime, Matty was working from home with his coat on and a space heater while this was going on outside. 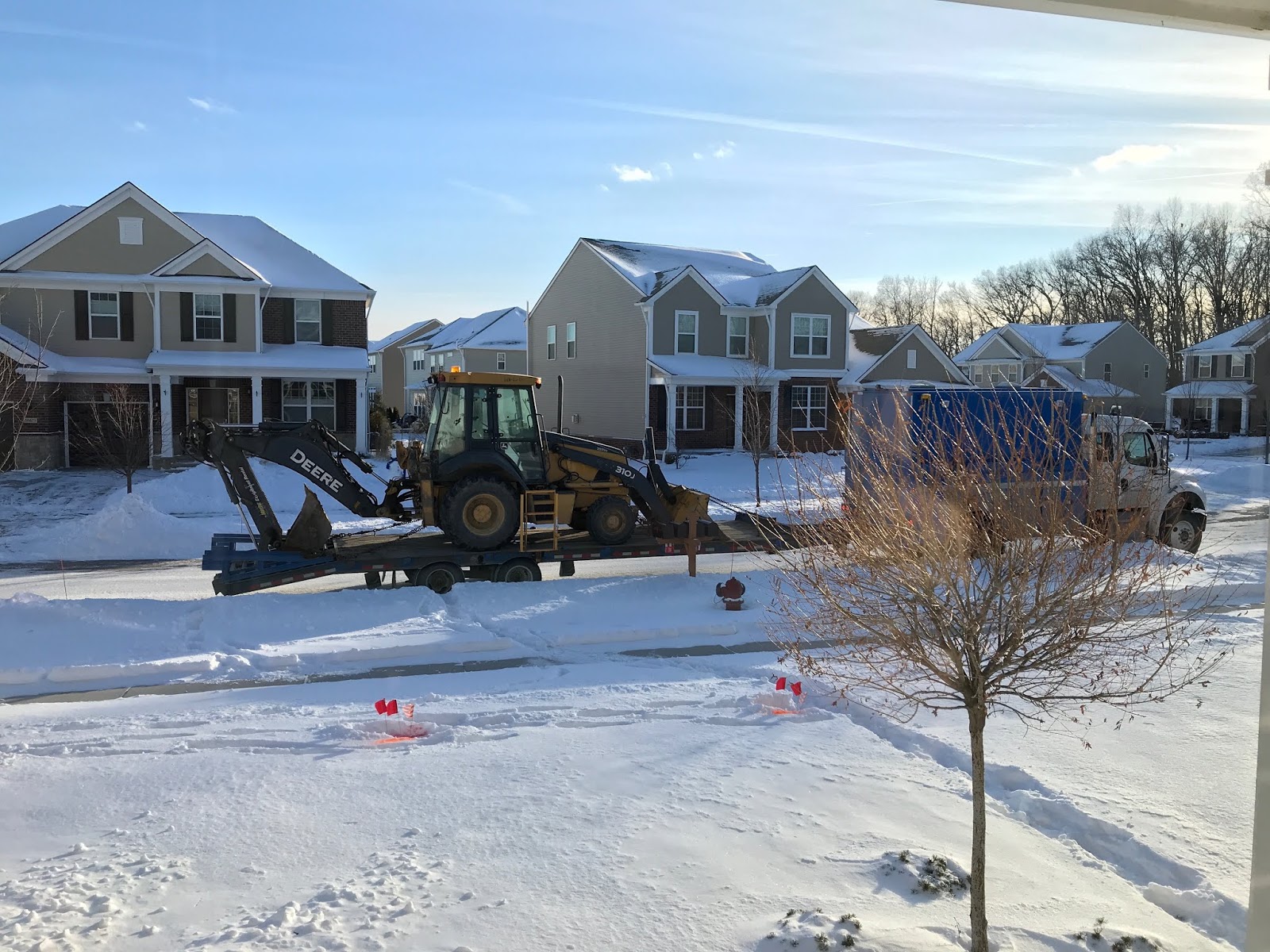 It was determined that they needed to dig up and replace some sort of valve that was buried underground. They dug a very deep hole in our front yard, and dug out a piece of Matty’s heart along with it. He’s so bummed about his lawn! But, on the bright side, they had it fixed by 5:30pm and the girls and I were able to come home and sleep in a warm house! 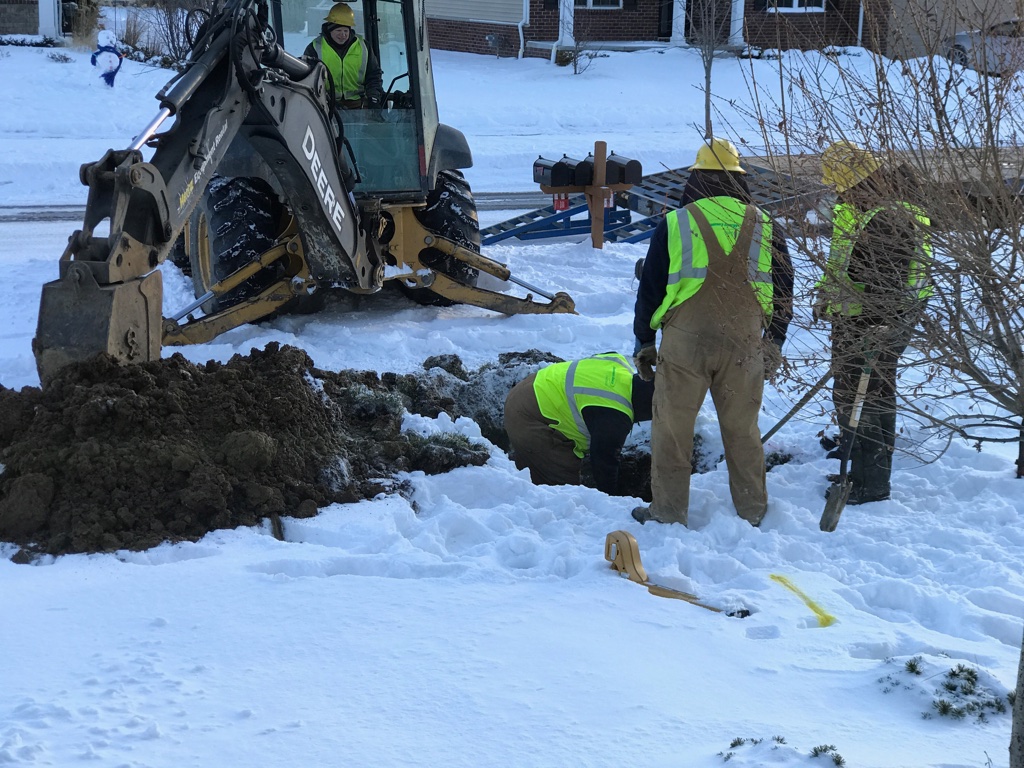 We had to make a stop at a McDonald’s about fifteen minutes from home for Lucy to take a bathroom break. Matty’s off today, and we are heading to the cottage at some point. Yesterday was supposed to be my day to pack and get everything ready . . . but that wasn’t possible in our cold house. Hopefully we’ll be ready to hit the road by nap time.
I think the worst is over now and, if I’m not mistaken, it’s supposed to be almost 50 degrees here on Sunday and Monday. Someone please remind me again why we don’t live in Arizona??
Have a great weekend!!
Come back on Monday for a special post all about Valentine’s Day.
XOXO