Trying to keep the titles festive. How am I doing??
You guys!
The Kissels cannot catch a break! As the girls FINALLY began to turn a corner and resume their normal behavior and day to day activities, I went down hard. And then Matt followed. So I had no choice but to use this meme as an opening to my post. 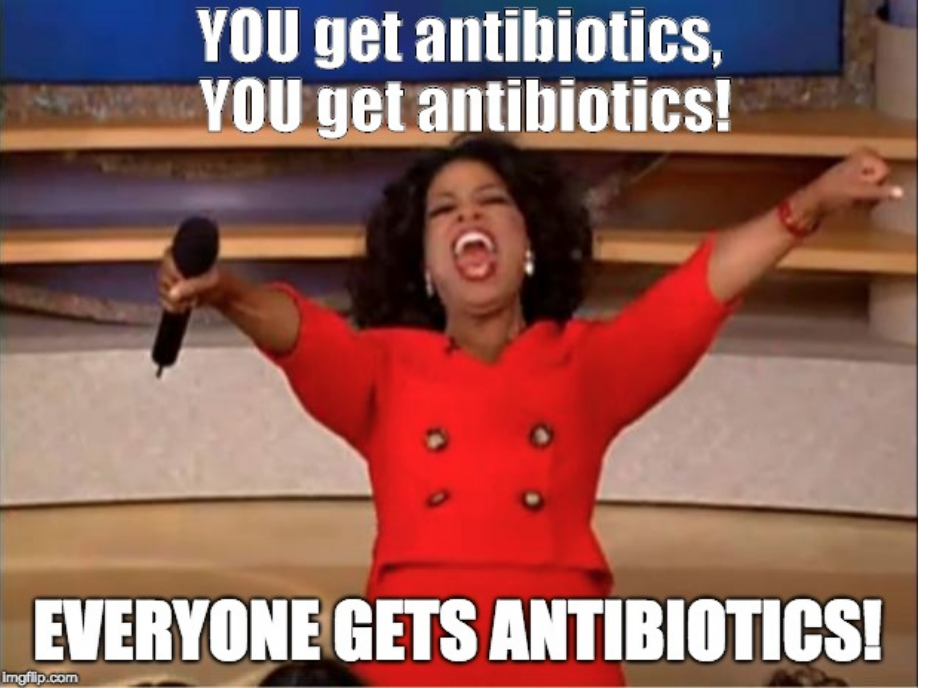 Side note: Did you know that if you Google “Oprah Meme” a website comes up where you can generate your own words for that picture?? Genius! It was so easy and then I just took a screen shot and suddenly my blog post is that much better. 😉 Also, you can bet your bottom dollar that I’ll be using it again. And again. Be warned!
So my mom came over on Monday to visit because it had been over a week since she’d seen the girls. They played hard while I did some disinfecting and then rested. 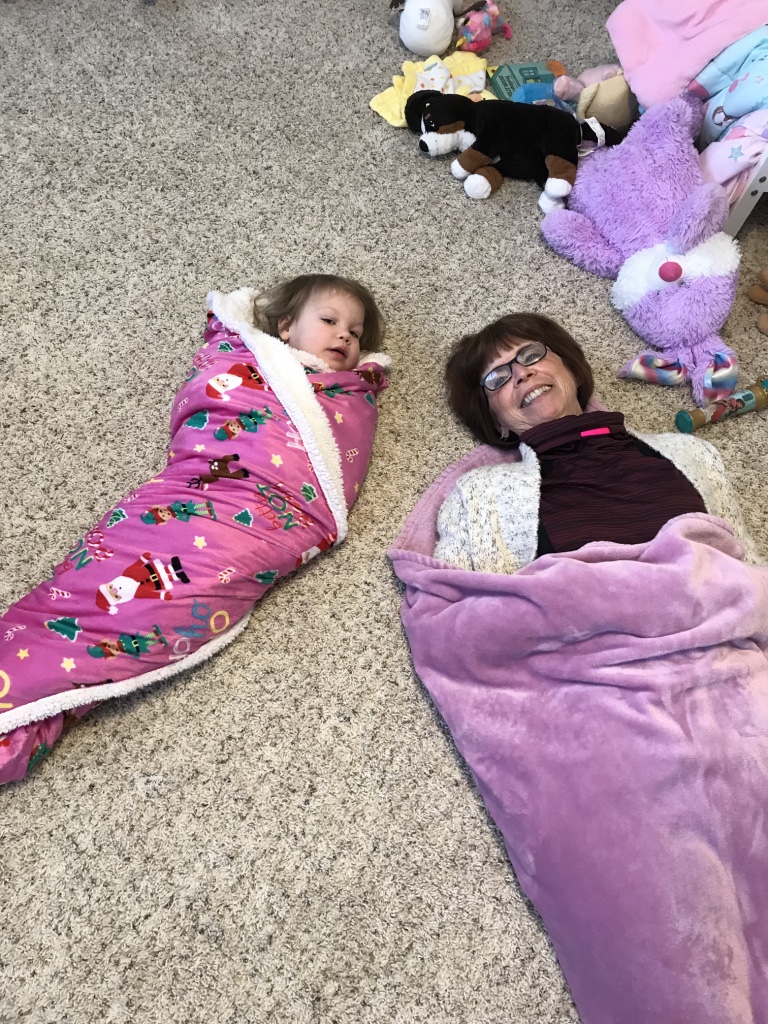 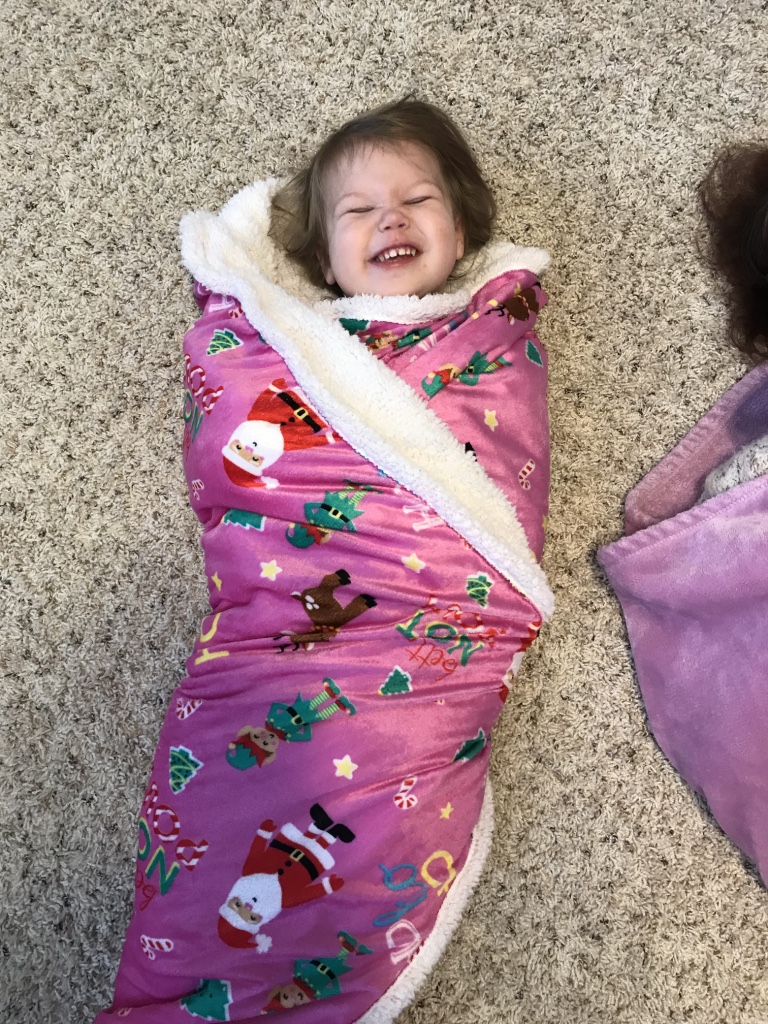 And that is all I have from Monday. My mom left around 3ish. By 5:00 I knew I wasn’t feeling all that great, and by 6:00 (when Matt had to go on a conference call, of course!) I was downright miserable and had a pain like no other in my left ear. There was no way I was making it through the night that way, so I left Matty to tackle bedtime on his own and I headed off to urgent care. The doctor quickly said I had an ear infection and then followed that up by saying she rarely sees ear infections in adults. #luckyme
She gave me a prescription for an antibiotic and sent me on my way. Mother/daughter ear infections is not my idea of bonding!
My saint of a mother headed back out to our house on Tuesday. Based on how I felt at urgent care Monday night, there was no way I was going to be useful to the girls on my own! She took Lucy to school, and look what Lucy brought home at the end of her day! So sweet! 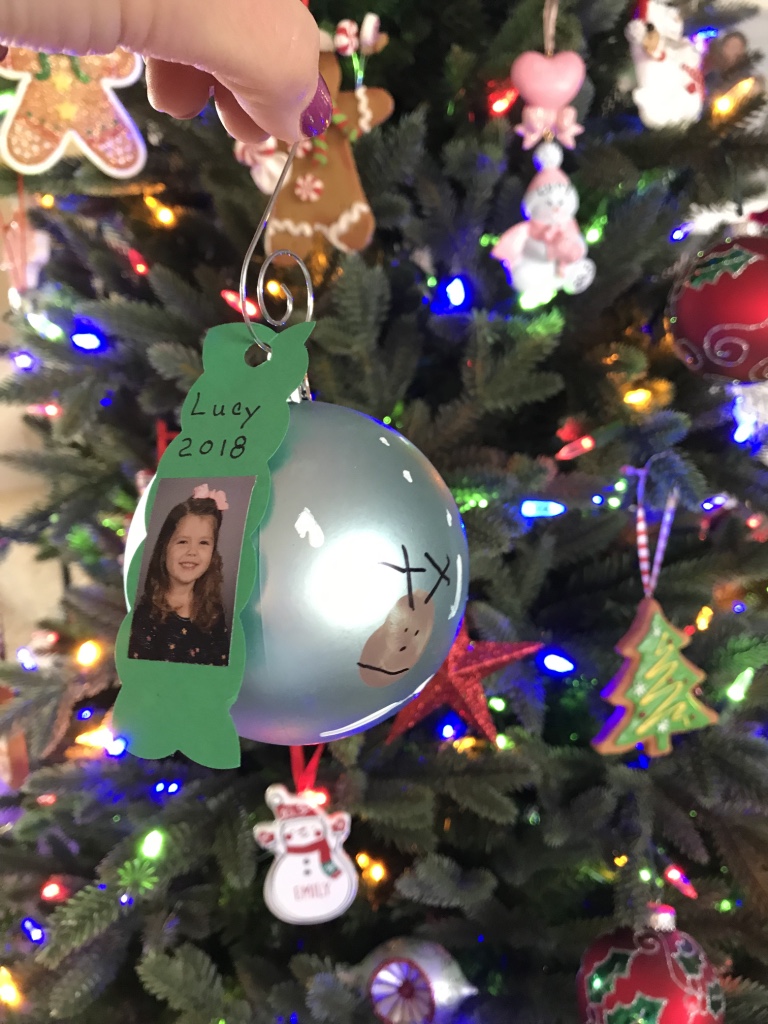 And that’s the only picture I have from Tuesday. My ear felt a little better on Tuesday, but I was coughing something fierce. It was so bad in the evening that Matty decided to sleep in the guest room so I wouldn’t disturb him, and I couldn’t blame him!
I woke up (and I use those words loosely . . . I was too busy coughing to get much sleep) Wednesday feeling a little better but SO TIRED. But I was determined to will myself better. I figured if I dressed the part then I’d FEEL the part . . . so I dried my hair, put on a little make up, and snuggled with Lulu who was finally feeling pretty darn good! 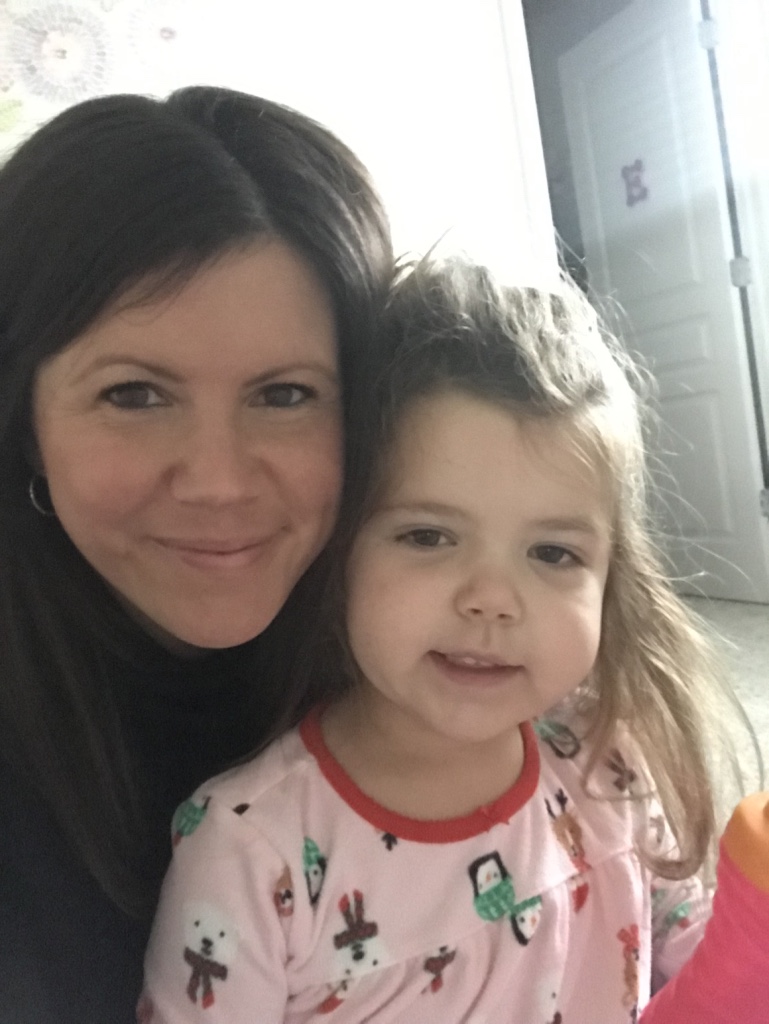 While I was getting the girls ready for the day, Matty called to say he really wasn’t feeling well and that he thought it was best he go to urgent care at lunch to get things taken care of. I told him he should head home after urgent care so he could rest. He said it was more relaxing for him to just sit at his desk than to be home. #touche #someonegetmeajobwithadesk #STAT
I was determined to be productive yesterday after about ten days of being stuck inside with illnesses. So the girls and I headed to Target. You can see how it takes me forever to do anything . . . Lucy now has to strap Nemo into her carseat and cover him with a blanket before she can get out of the car. 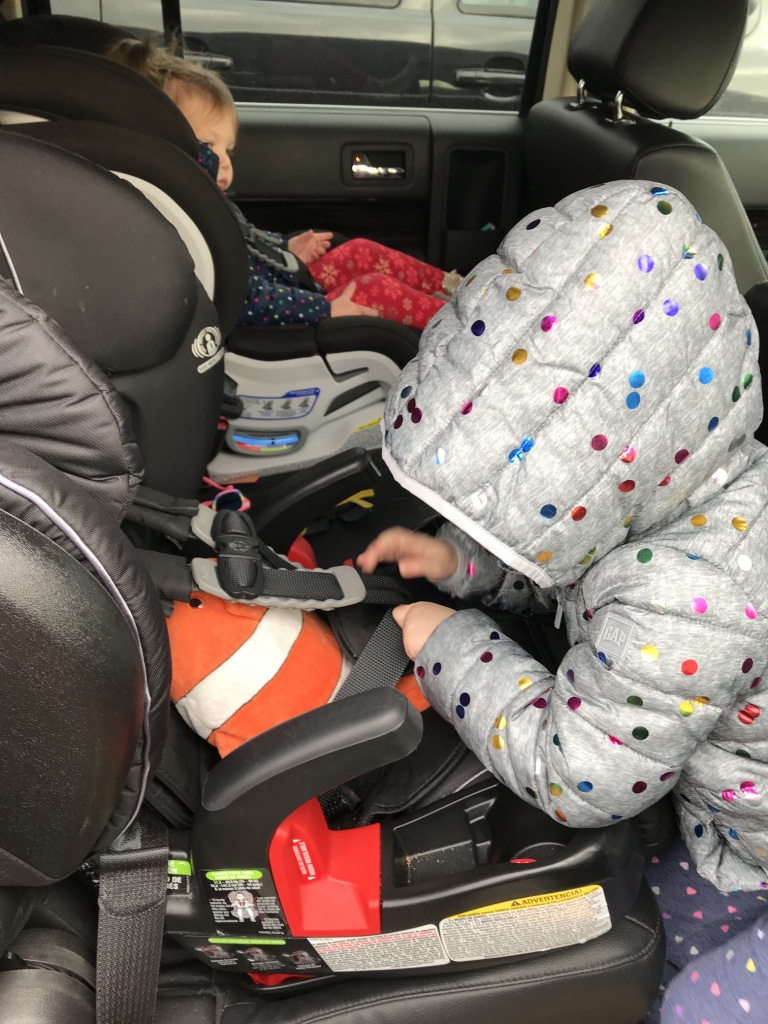 I had a loooong list of things to get, and the girls did a great job passing all of the items back and forth in the cart. 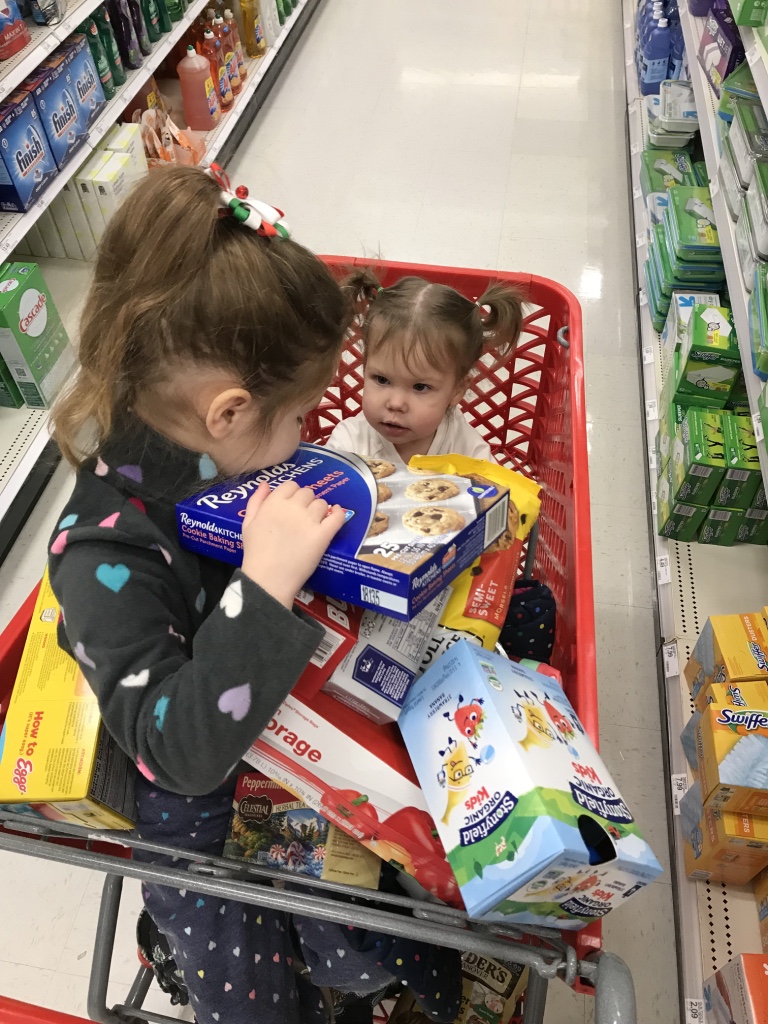 It was sunny and 38 degrees when we got home from Target. I threw our lunch/nap schedule to the wind, threw our purchases on the counter, grabbed our Halloween pumpkin (duh!), and got those girls outside. #germsbegone 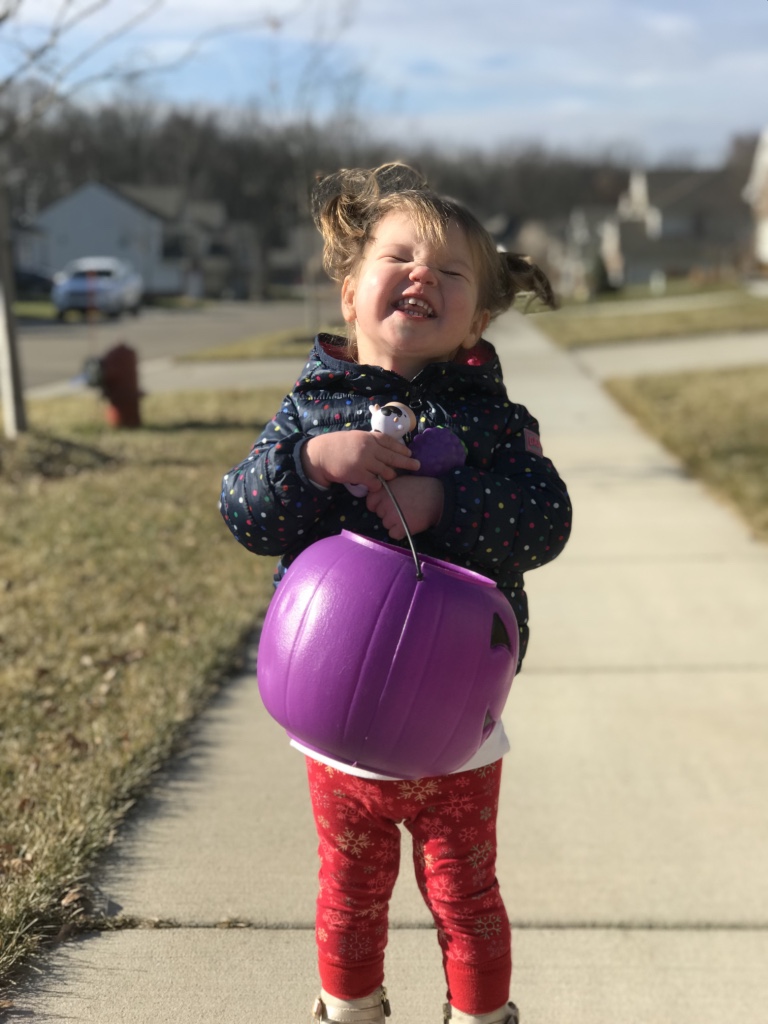 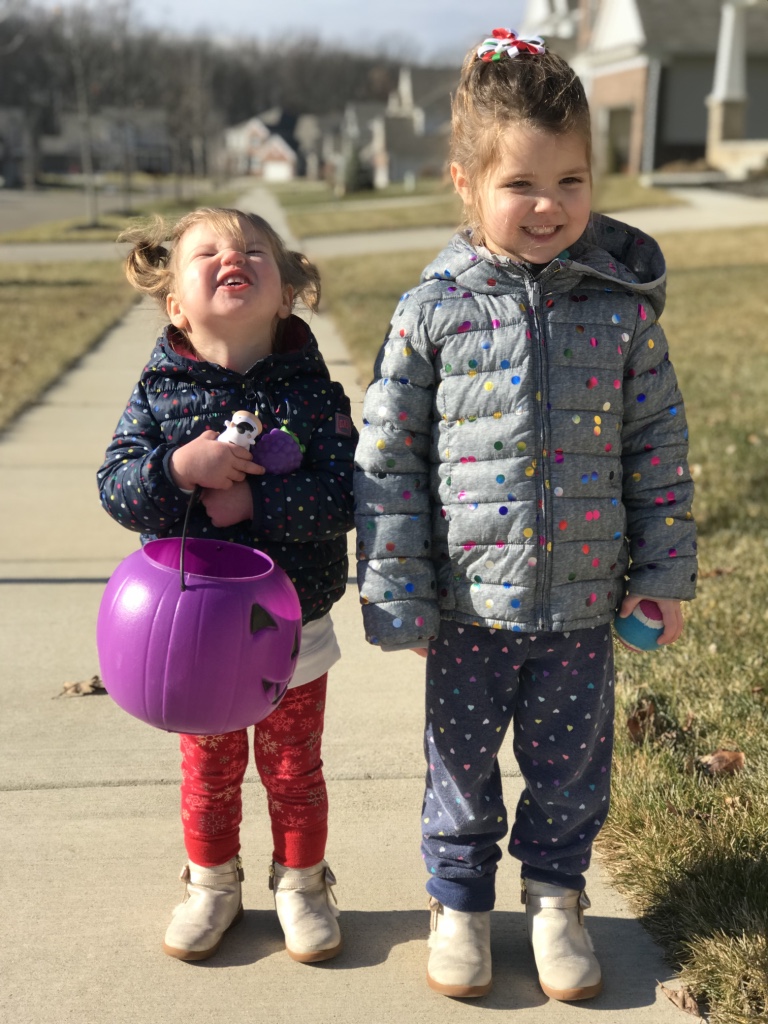 Have you noticed a trend in Emmy’s smiles lately? Here’s the best one of the day . . . she was so happy to have a Hershey Kiss after lunch! 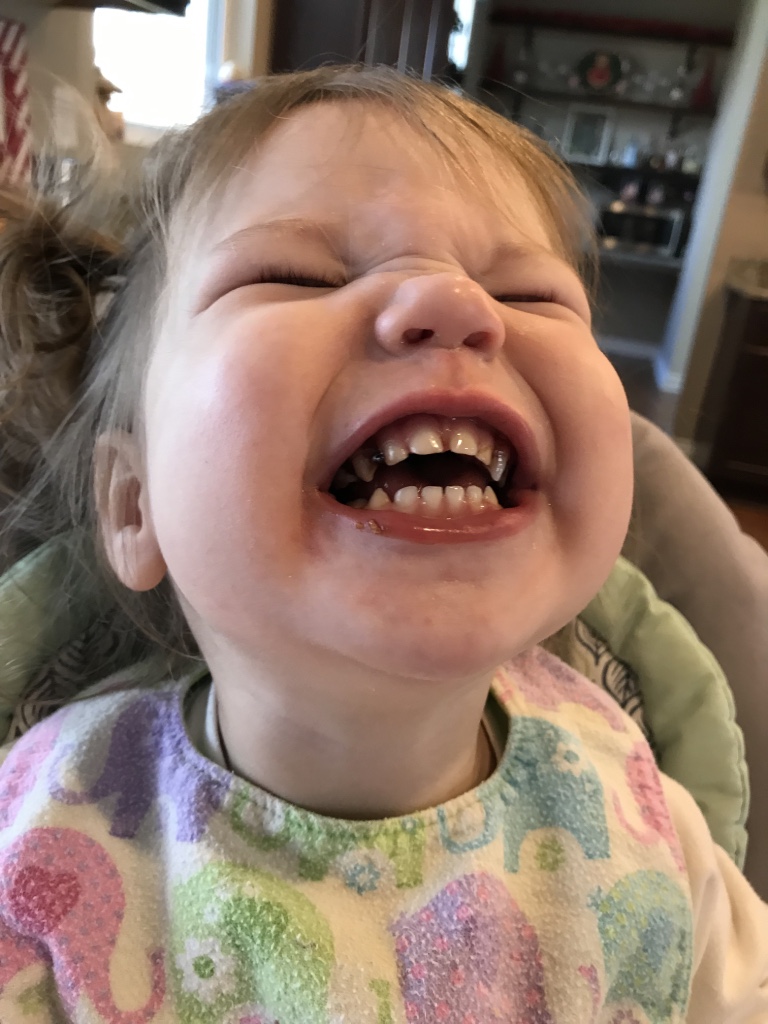 The girls are definitely feeling better, which is great, but that also means they’re full of energy while Matty and I are exhausted by dinner time. But, Santa awaited us at our clubhouse, so after dinner we loaded up the wagon and headed out! 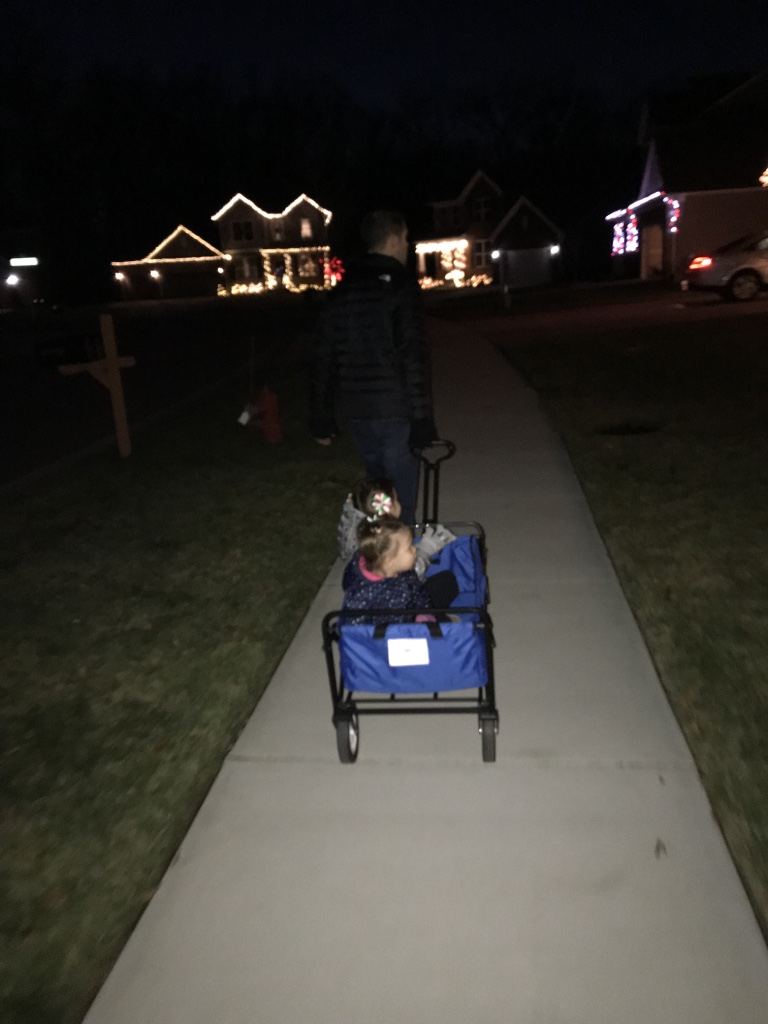 I almost didn’t include these pictures because my face is so tired and puffy from the past week, but they’re too funny not to share! Ems was super pumped to see Santa . . . until we got there! 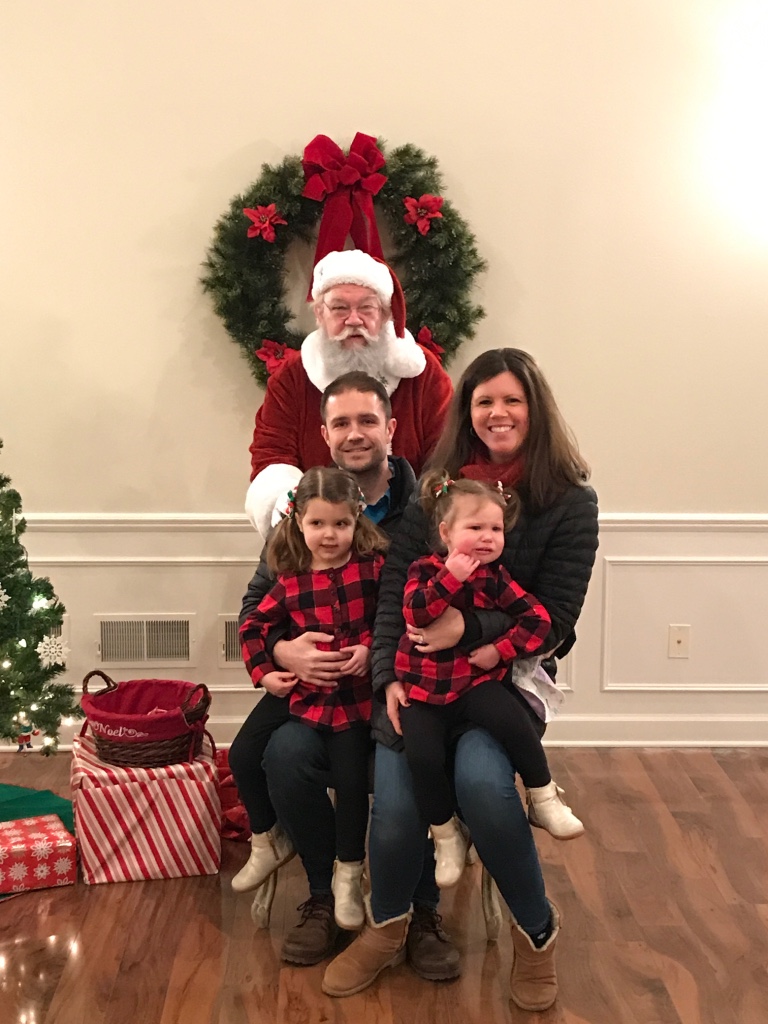 After some hot cocoa and part of a candy cane, Lulu warmed up to Santa and started playing games with him. 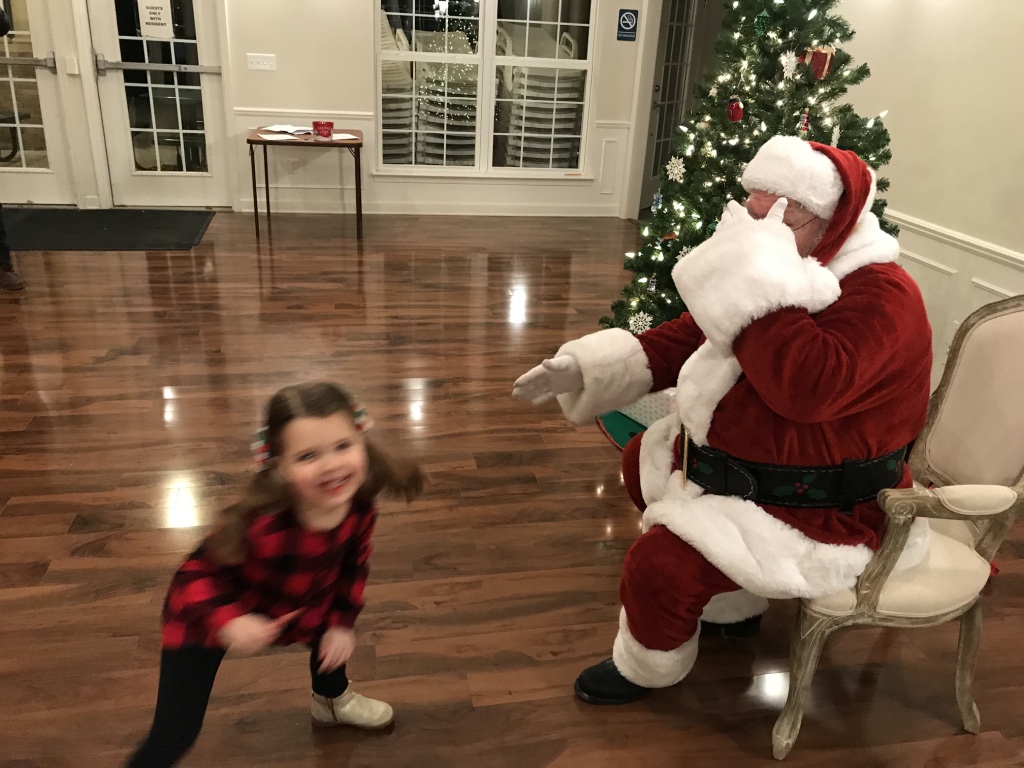 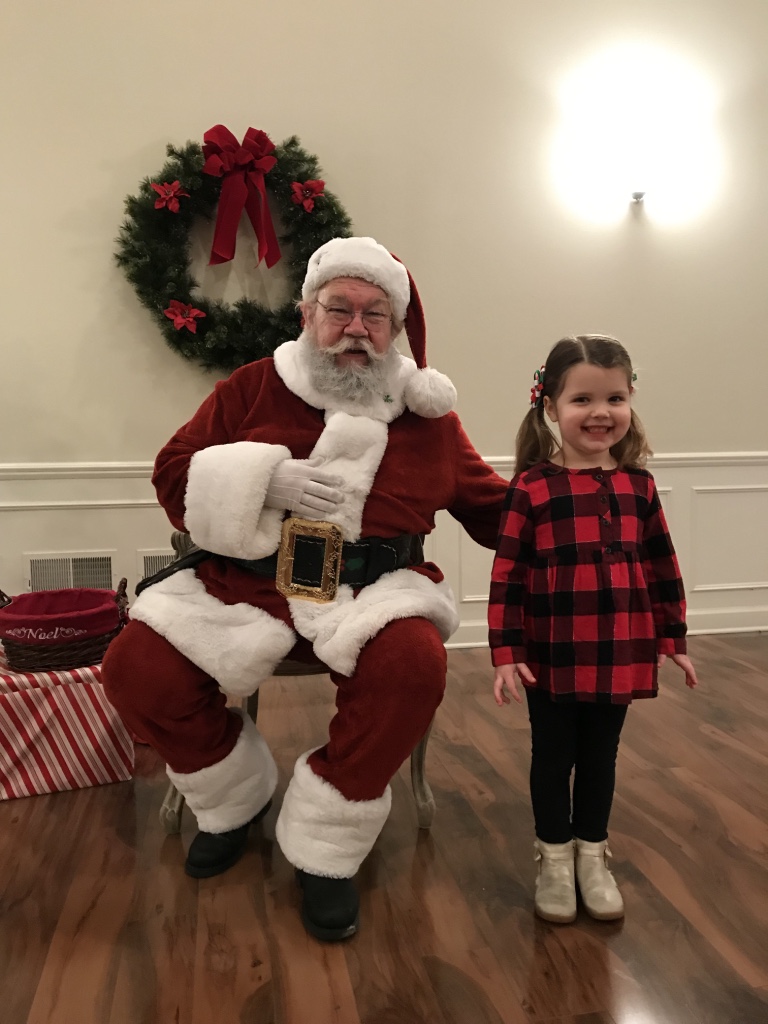 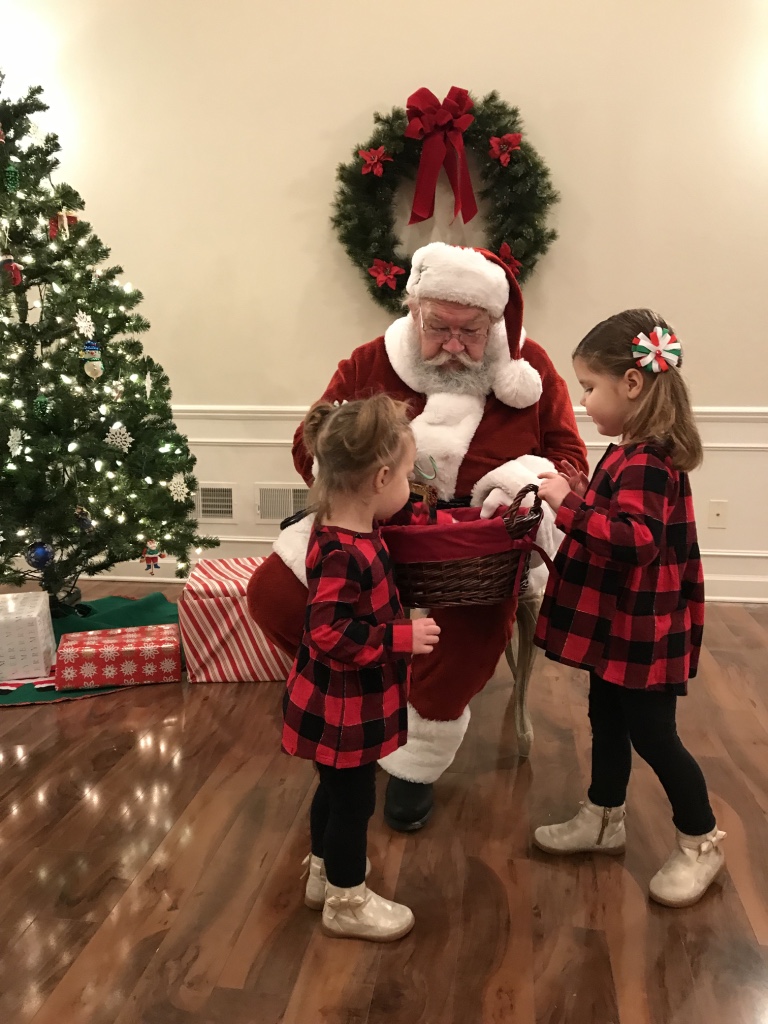 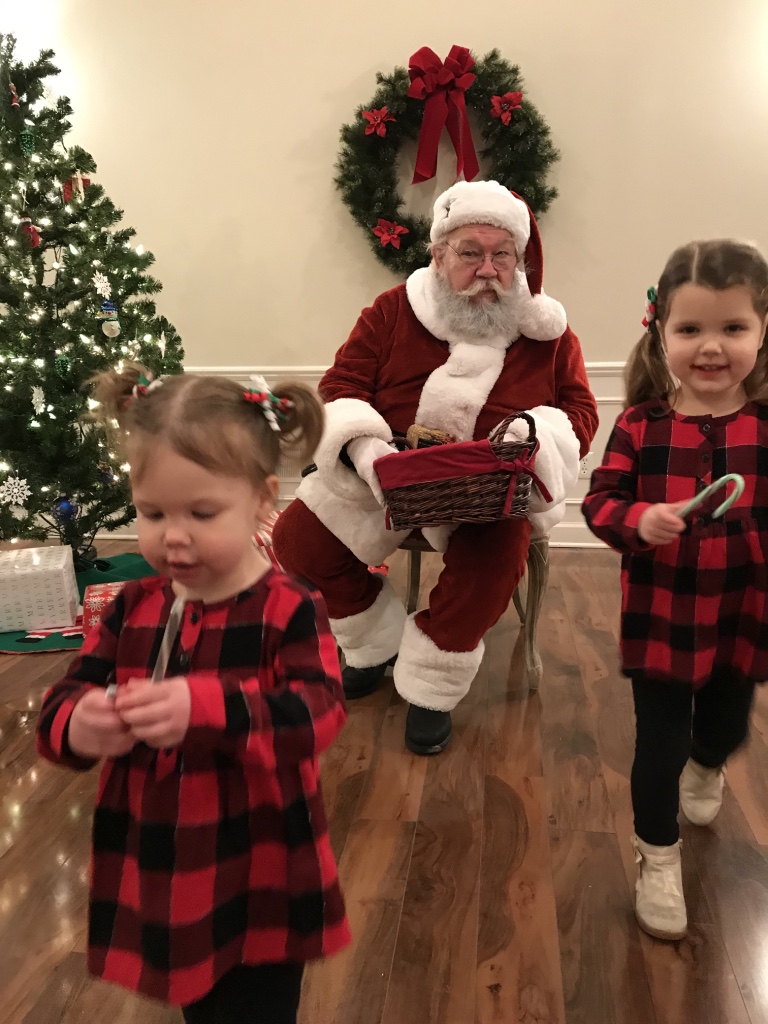 Look how sweet they are looking at Santa on our way out! 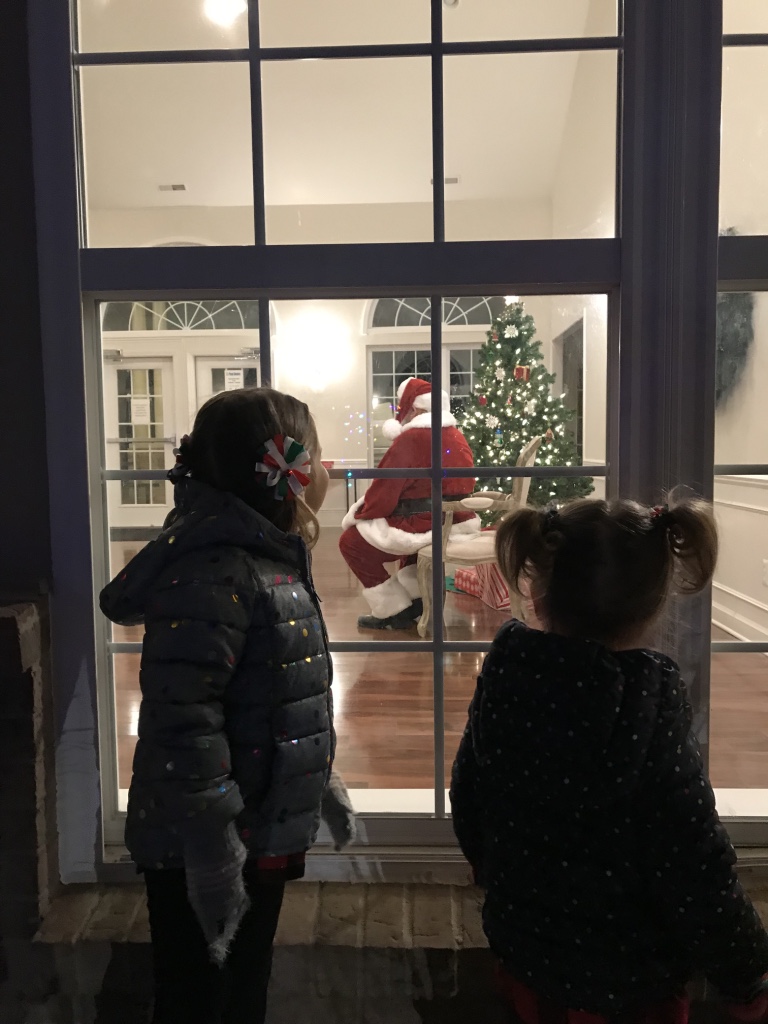 I’m so bummed that the flash went off because Santa was waving to the girls, but now it’s hard to see it! 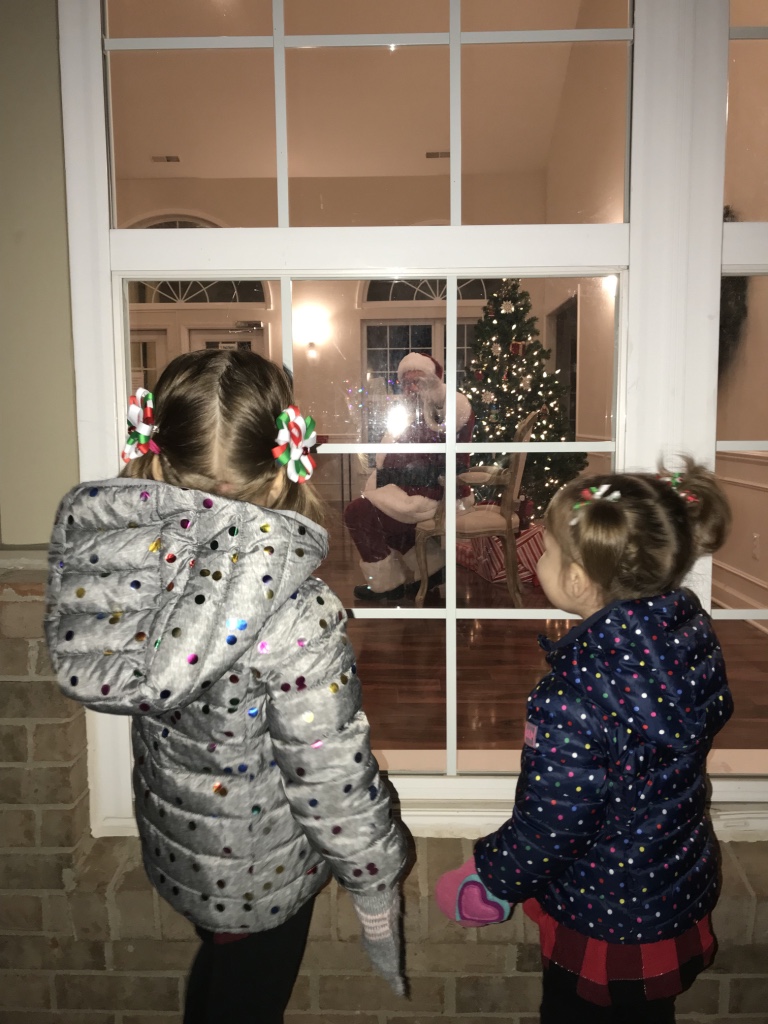 And that’s that, folks!
I got a little pep back in my step at the day wore on yesterday, so hopefully Matty isn’t too far behind. As I sit here in bed creating this post, he’s already sound asleep, and I hope to follow soon!
I’ve already had to cross several things off my to do list and cancel a few holiday get togethers due to everyones illnesses. I’m bummed, but I’m definitely not stressing about it. We don’t NEED five different kinds of cookies anyway, right?!
I’m hoping that by Friday I’ll be back up to my normal energy levels and ready to tackle my to do list for the festive days ahead. We host Christmas Eve which is exciting, this is our first Christmas in our new house which is even more exciting, and this is the first Christmas where Lucy GETS it and Ems just mirrors her excitement, which is the best thing ever!!
All that to say, I’m most certainly feeling a little behind after our ten day setback, which is why this made me laugh out loud when Carla sent it to me yesterday morning! 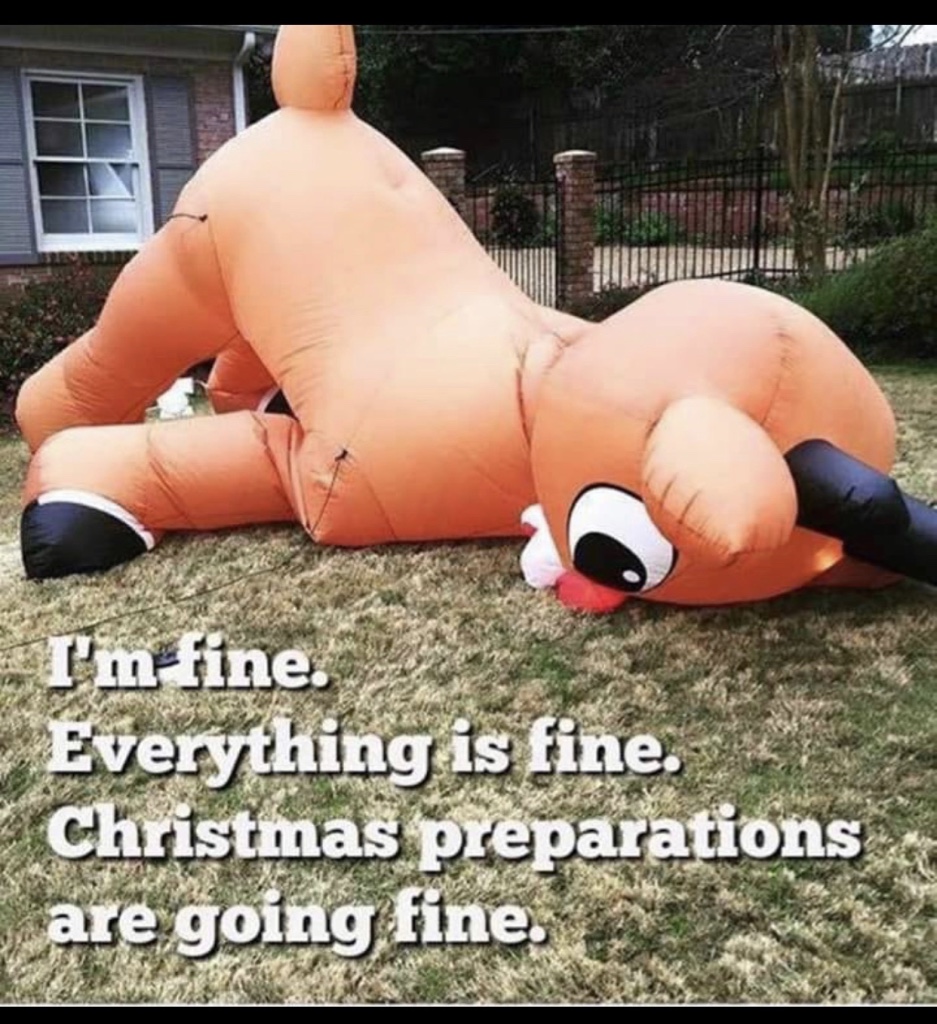 Have a great weekend, friends!
Our Christmas festivities start on Saturday and go through the day after Christmas, and we are READY FOR IT!
The next time I post it’ll be Christmas Eve!!! So magical!!!
XOXO