Except minus the holly jolly!  🙁
We’ve had a doozy of a week here at the Kissel house.
You may recall from my post last Sunday, that the girls started feeling poorly last Sunday and Monday. Well, by Tuesday neither one of them had slept through the night for two nights, their noses were seriously out of control with the amount of goo running out of them, Ems had a fever, and both had terrible coughs. So I decided to keep Lucy home from school, and we stayed home all day long. #emphasis on long
We started the day with some cute antics from Raspberry, our elf. She knew the girls were under the weather and wanted to make them giggle. It worked! 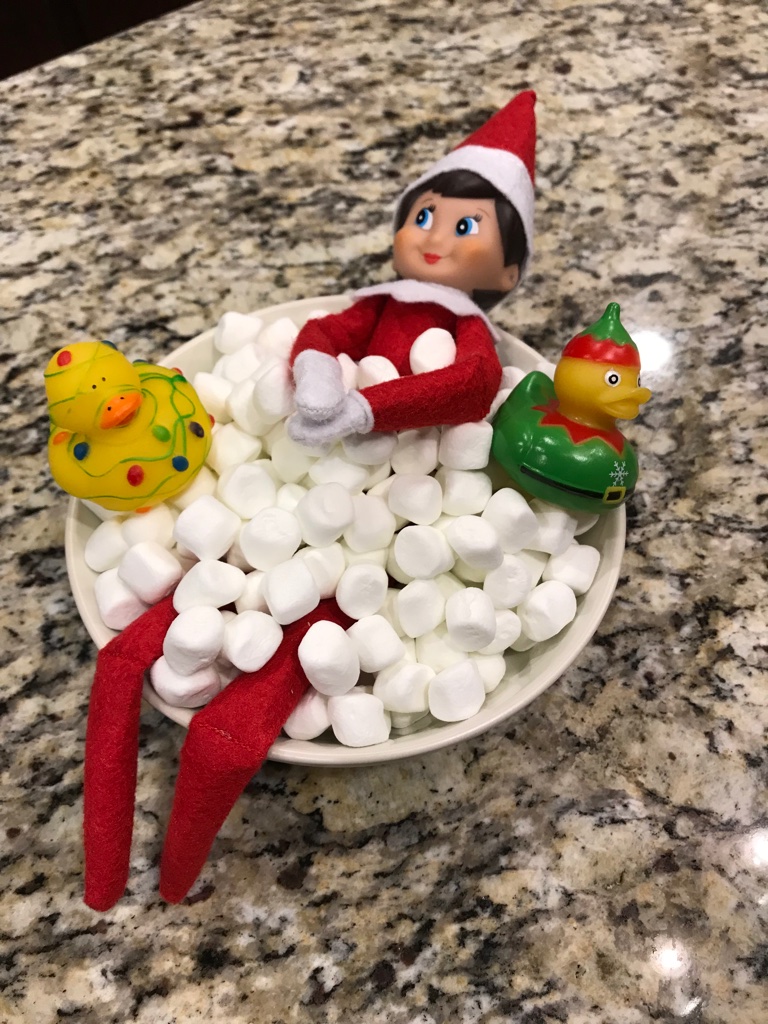 Then we lined up all the stuffies and gave them check ups. 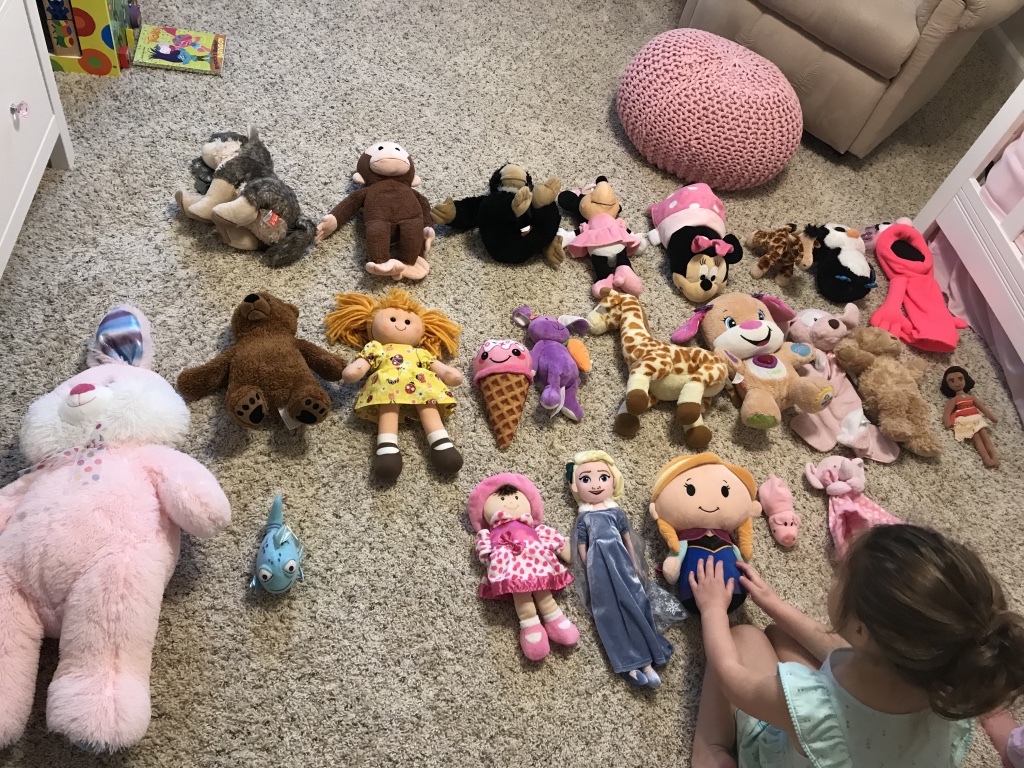 I try hard to always be dressed, eat breakfast, and brush my teeth before the girls wake up. Then I really have no excuse to be in our bedroom or bathroom during the day. This is why! Lucy woke up early because she coughed herself awake, so I still needed to brush my teeth. The girls used the time to line up all of the products in my cabinets! 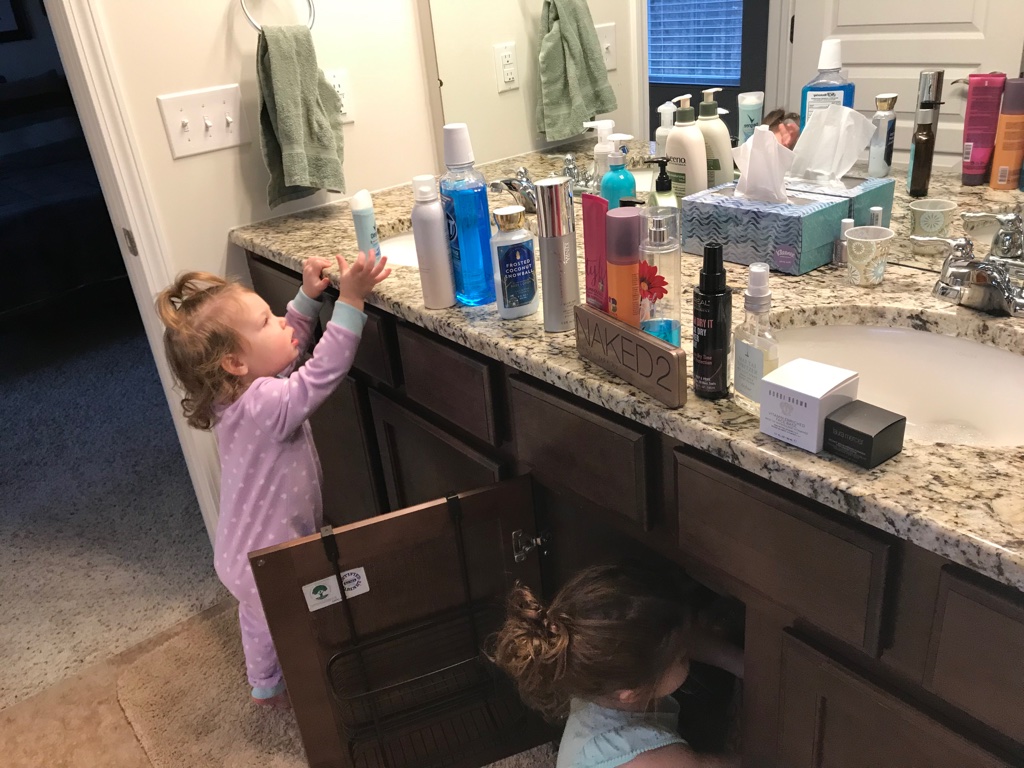 We got a Target delivery that came in a large box, so the girls sat it in and colored for awhile. 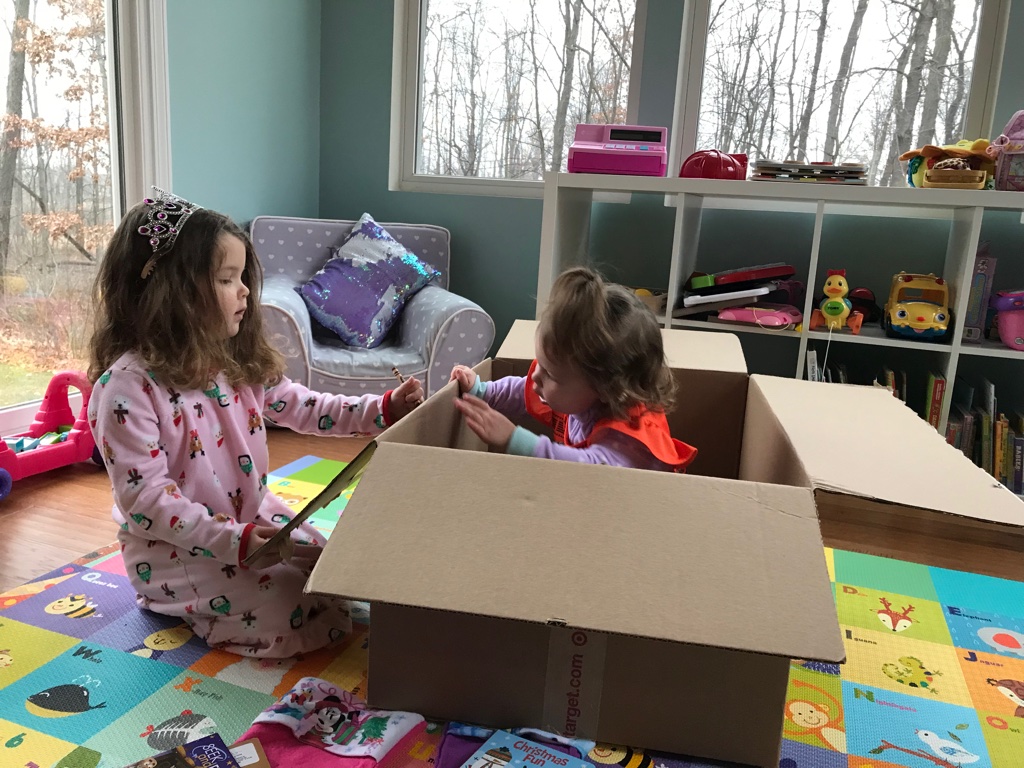 They were definitely getting fussy, so I broke out some water paints I had stashed away. 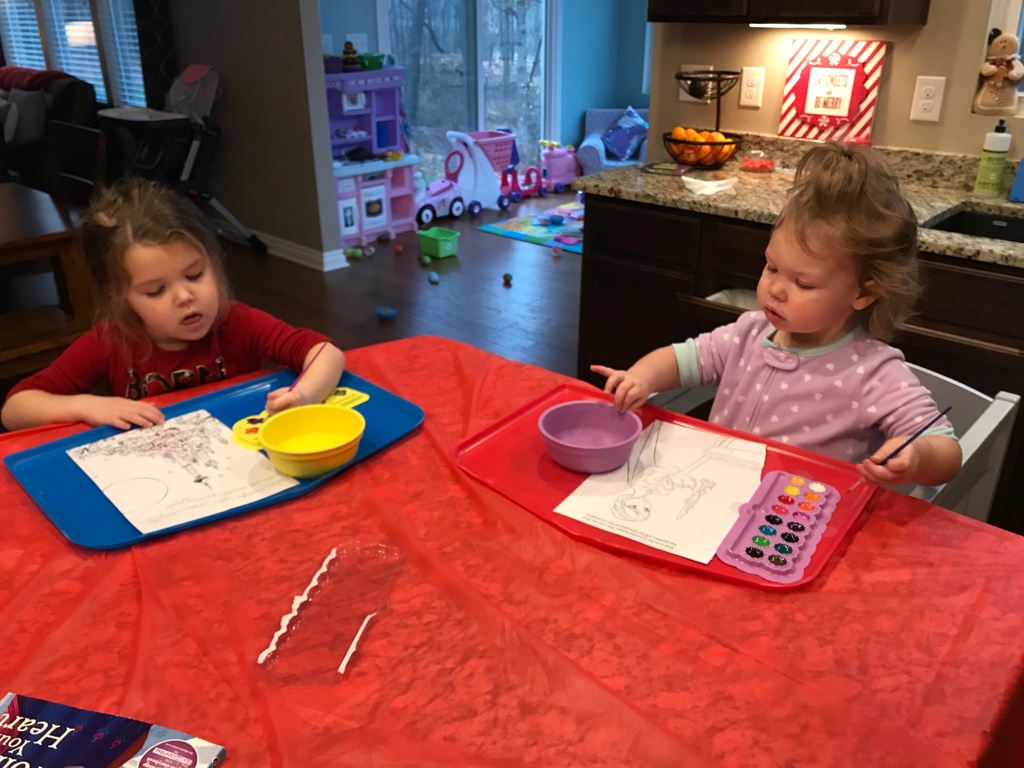 Ems read in the box for awhile and by that time it was almost time to make lunch. Kidding! It felt like the day crawled by though. Fussy kids will do that to you! 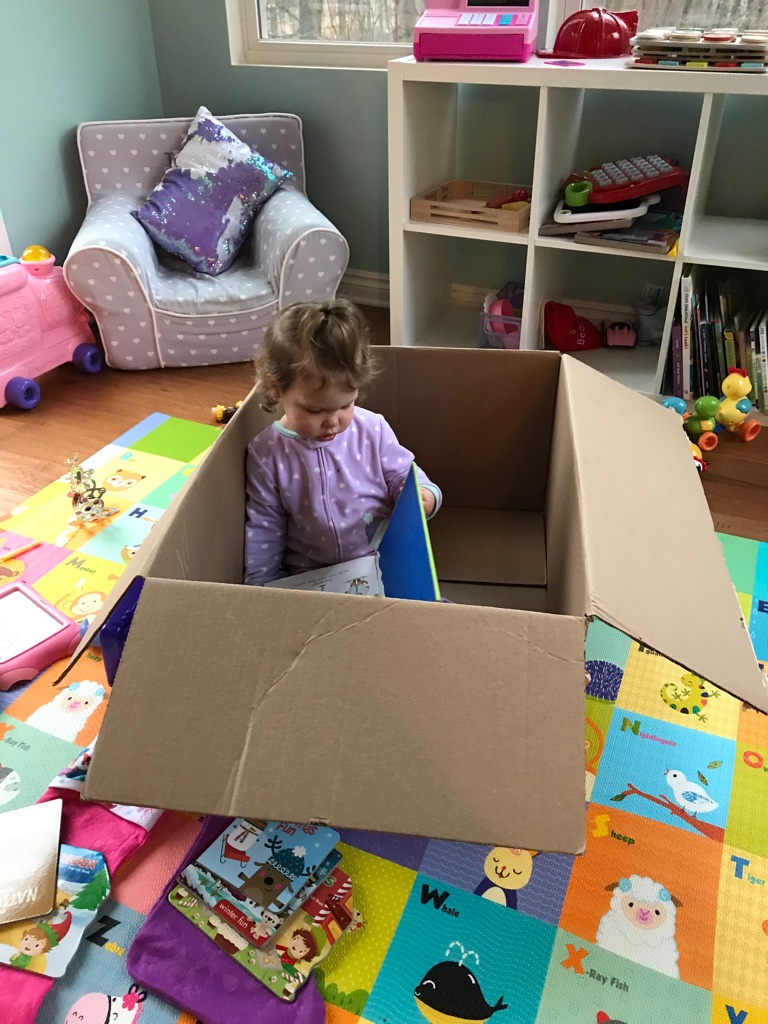 After another sleepless night, Ems woke up Wednesday morning and was not looking good. Her poor eyes and face were so swollen! 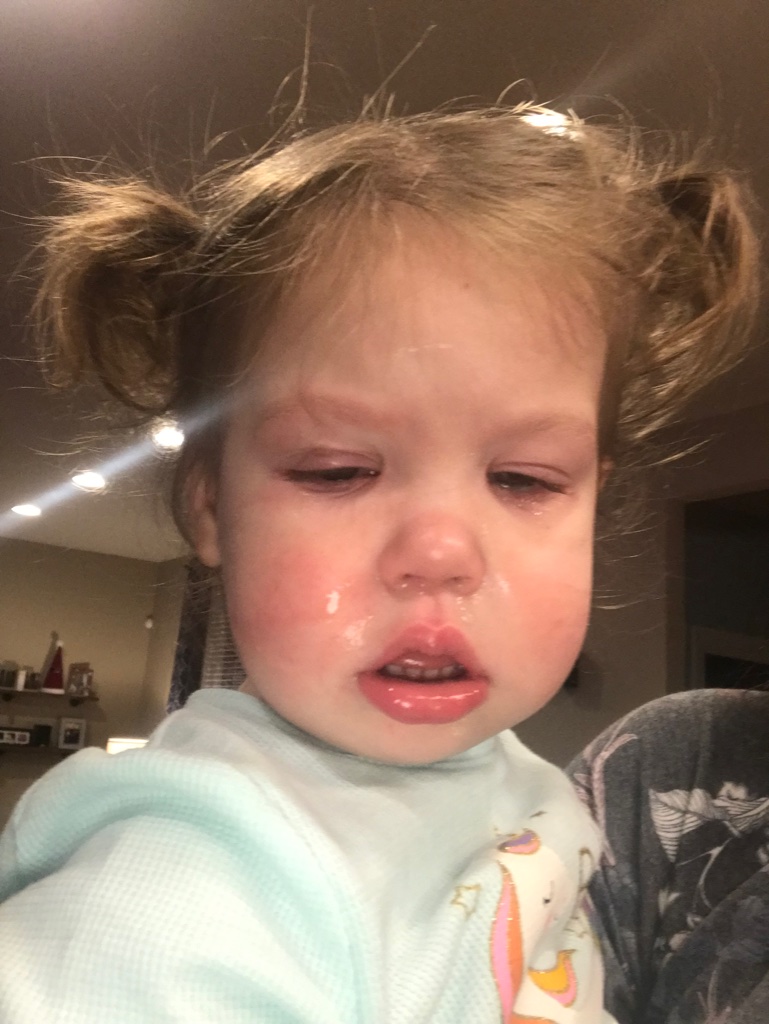 We headed out to the doctor later in the morning. Ems knew she’d be doing a lot of screaming, so she grabbed a quick nap in the car on the way to rest up. 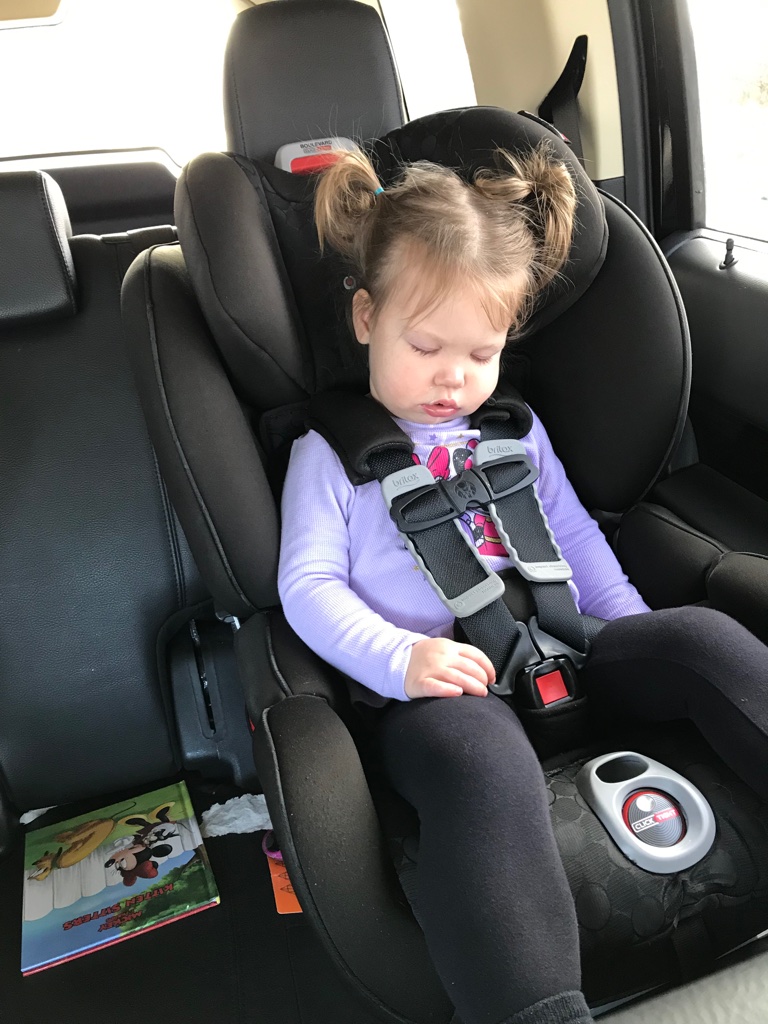 It was every bit as traumatizing as I knew it would be. For some reason, sweet Emmy Roses is terrified of the doctors office . . . from the second we step in the building! So it turns out Emily’s eyes were infected as were both of her ears. Poor little thing! The doc checked out Lucy as well and determined she just had the nasty cold.
We now live thirty minutes from our doctor, and our drive home required TWO bathroom stops for Lucy. It’s a much nicer drive to take the back roads home to South Lyon, but there is literally nothing in between the doctor and our house. So . . . we made a quick stop at Holiday Market to grab some things and let Lu go potty. Then we headed out of town and back to South Lyon and Lucy started really getting upset because she had to go again . . . so I turned around and drove five miles back to the nearest Kroger. Ems cried the whole way and for most of the bathroom trip. I happily would have taken any sort of alcohol that someone saw fit to hand me in the moment. Just kidding, kind of!
Instead, I took out my phone to show Ems some videos, snapped a quick pic, and we finally made it home a little over an hour after we left the doctors office. 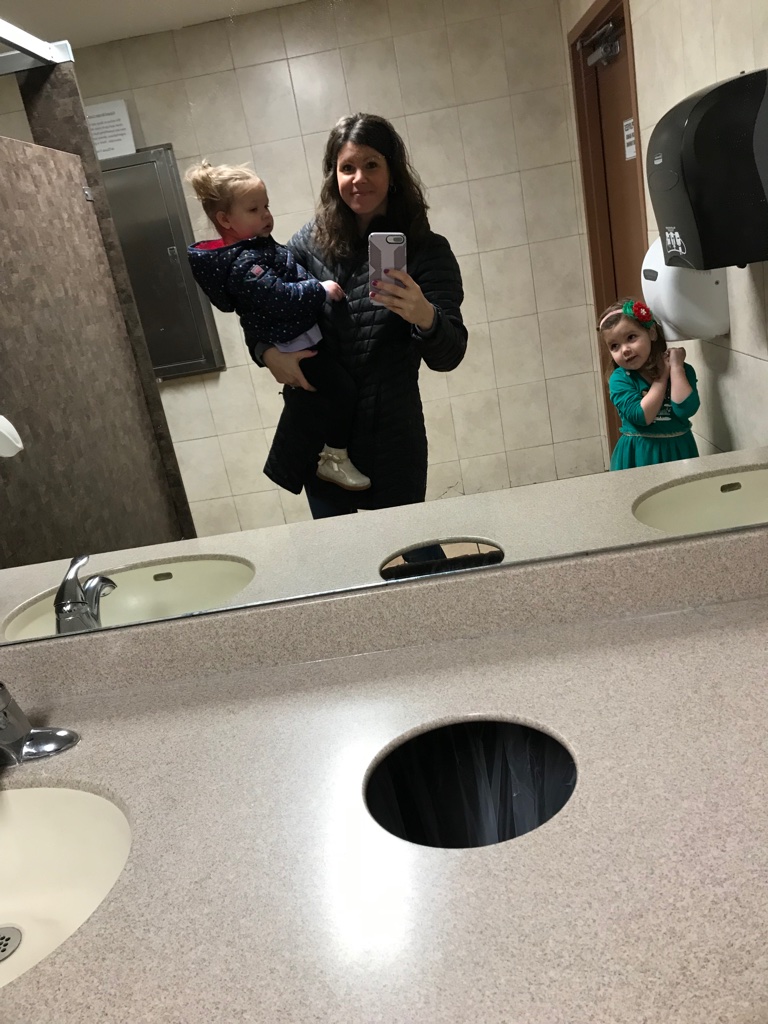 Lucy decided to provide a second opinion by giving Em a check up herself. 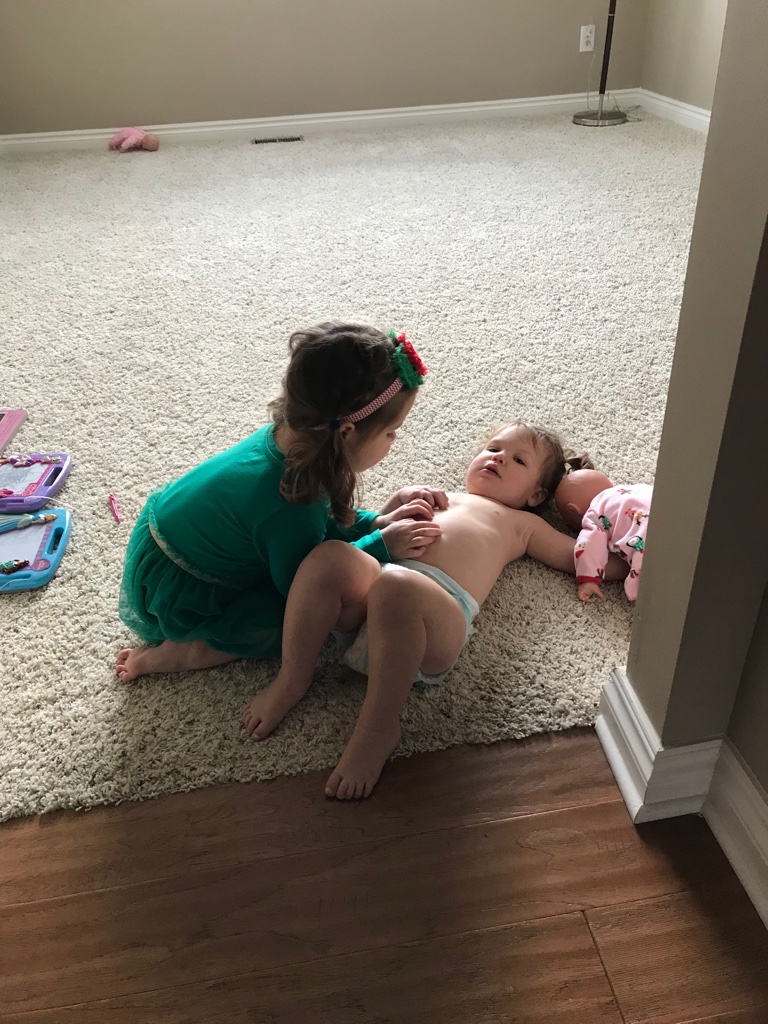 Emily has never given us any trouble taking medicine . . . until Wednesday. Getting her antibiotic and Motrin down her has been our biggest challenge . . . along with me getting a good night of sleep! 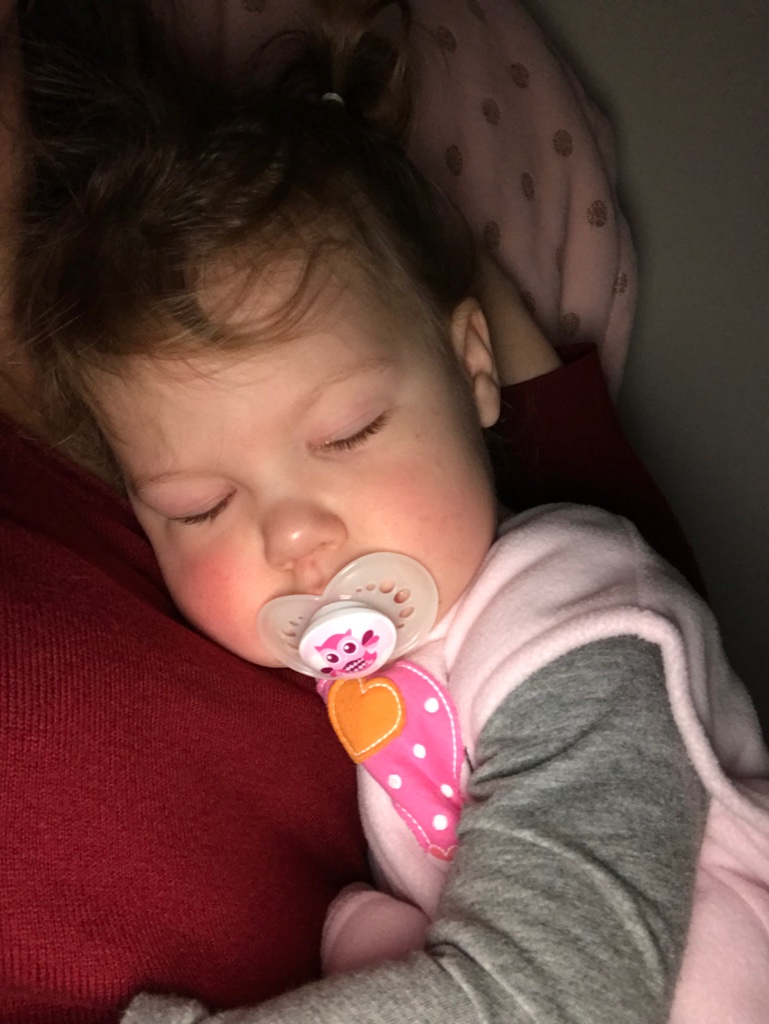 Rita came over to help out on Thursday, which turned out to be a good thing because by about 5:30 on Thursday evening I was feeling awful. My ears and throat were on fire and my entire body ached. Thankfully, Rita agreed to stay the night and I went to bed at 8:30pm and was able to sleep while Rita woke up with Ems at 3:30.
I woke up Friday morning feeling a little bit better, but Lucy was worse! She woke up in a panic because her eyes were so goopy that she couldn’t open them, and she had a pretty good fever going. Back to the doctor to find out that Lucy’s eyes were now infected as was her left ear. She slept most of the drive home. 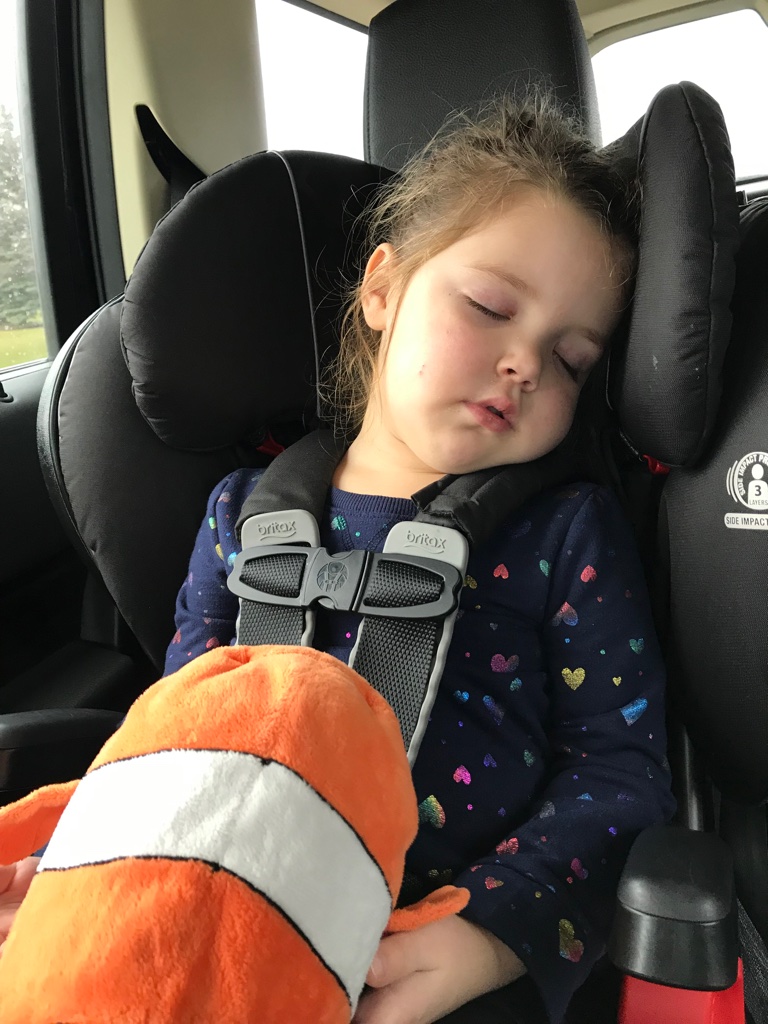 I was so happy to have Matty home with us on Saturday to help! Raspberry brought the girls these cute little purses because everyone needs a little something sparkly when they’re sick! 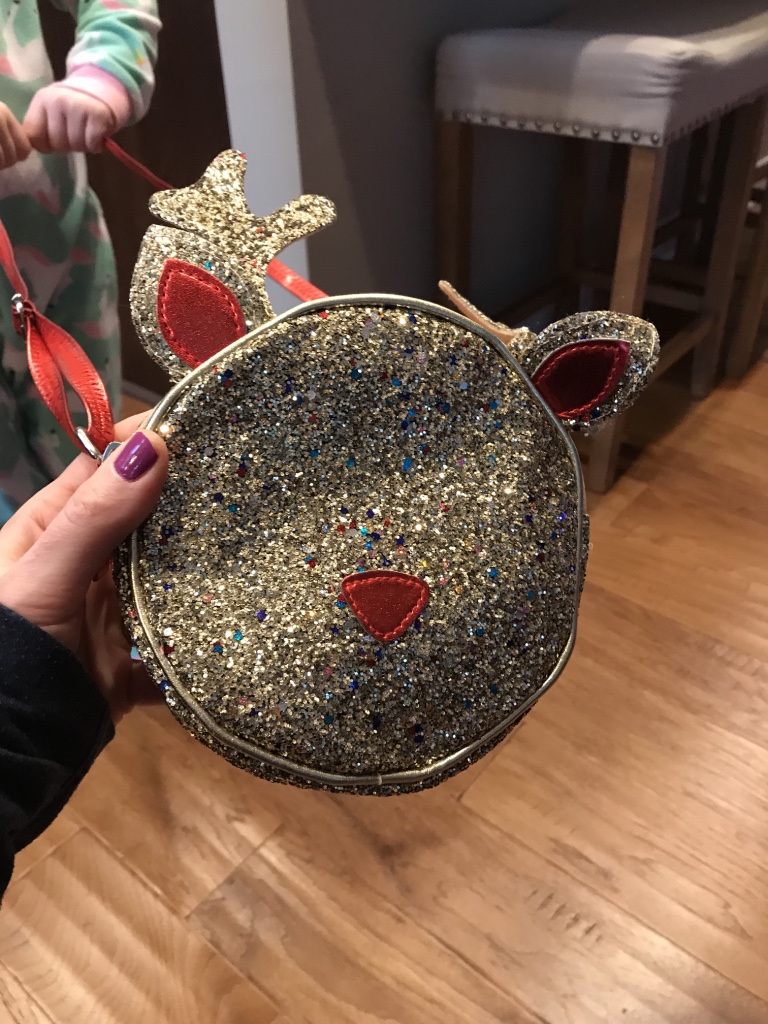 Fussiness was at an all time high, but after so many days in the house we decided to head to the grocery. 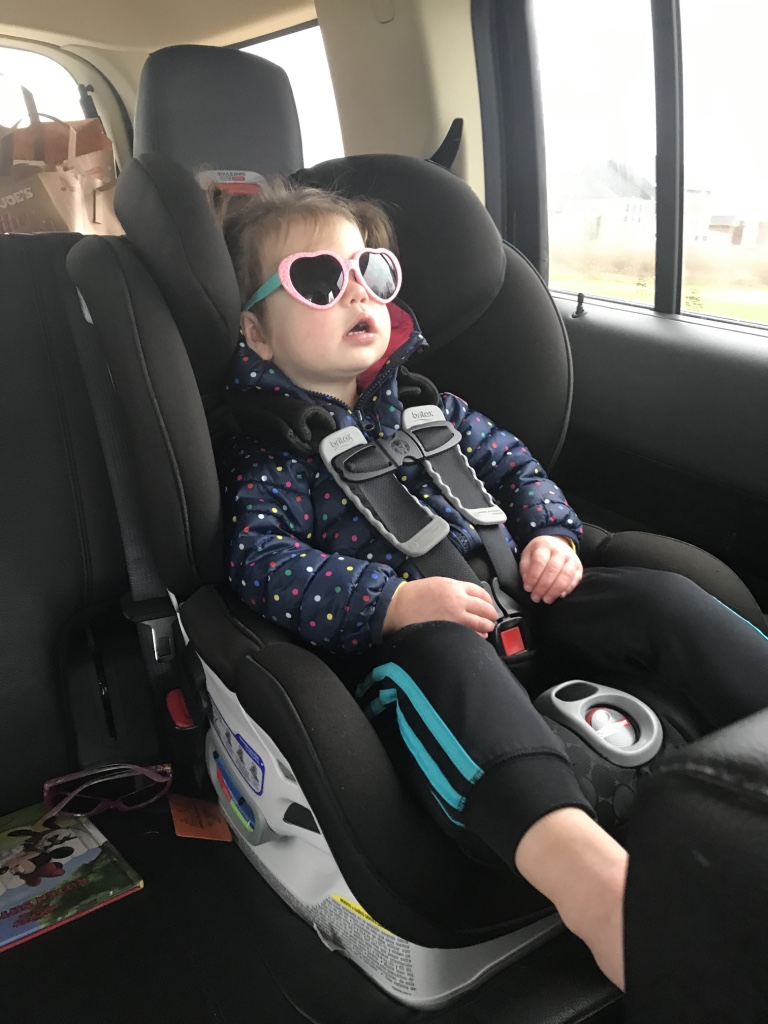 After the grocery, we spent the rest of the day playing and catching up on some laundry. Matty and his drinking buddy enjoyed some beer in the loft while we waited for our pizza to arrive for dinner. 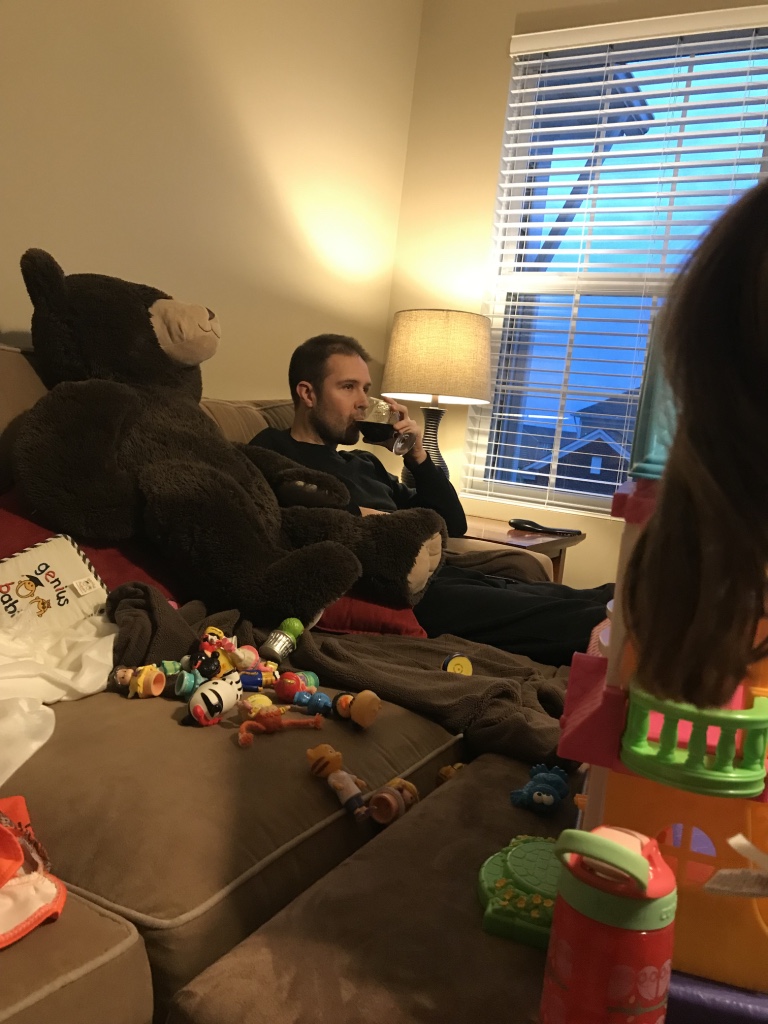 We wiped very few noses on Sunday, which was great! The girls seem to be improving a little every day . . . except for their coughs. They basically cough until they gag, and we feel terrible!
Lucy started off her day on Sunday by gazing at ornaments from underneath the tree. We also went to Costco, got a little fresh air and soaked up some Vitamin D, and then made the most delicious chicken noodle soup and homemade bread for dinner. 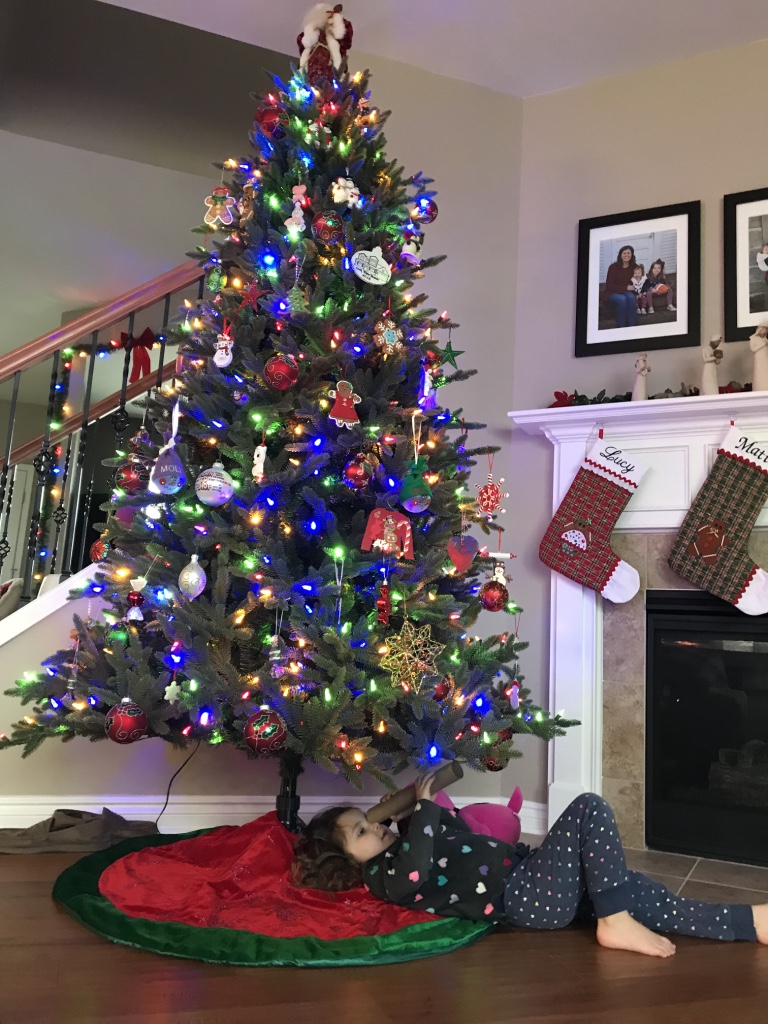 This was the first big illness for both girls, and I know we’re lucky to have made it this long without any ear infections or anything like that. I’m so happy that they are on the mend and ready to enjoy the extra special Christmas festivities over the next eight days!
Have a great week!
XOXO