Happy Monday! How is it OCTOBER already??
We had an extra long weekend over here, and it was fantastic!
Thursday morning the girls woke up around the same time and decided to have a milk party in Lucy’s bed. 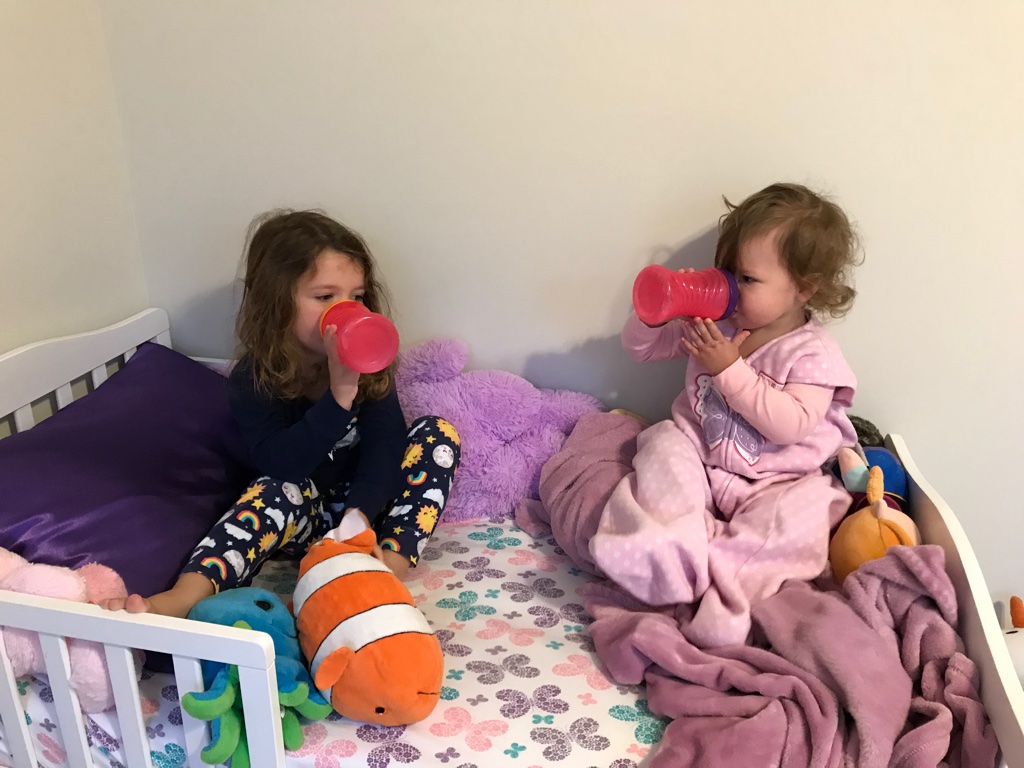 Ems and I ran to the grocery while Lucy was at school, and Emmy basically ate her way through the store. I brought her a granola bar, the deli person gave her a slice of cheese, and they were giving away donut holes at the bakery! 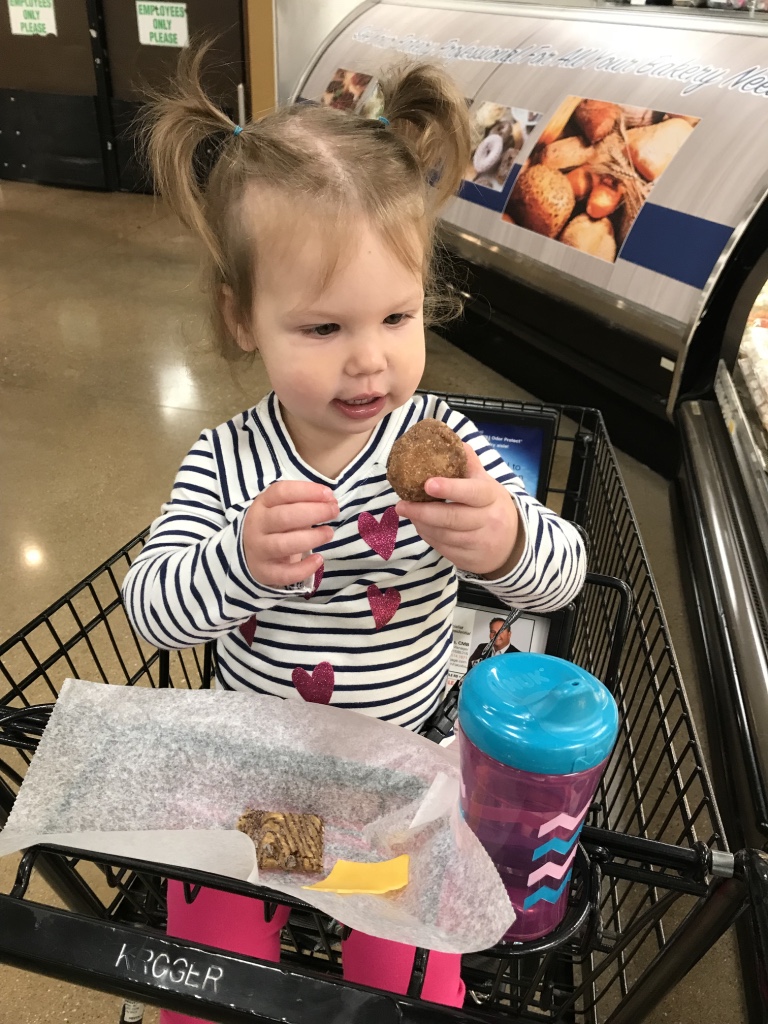 It keeps her happy and distracts her from trying to climb out of the cart, so I’ll take it! 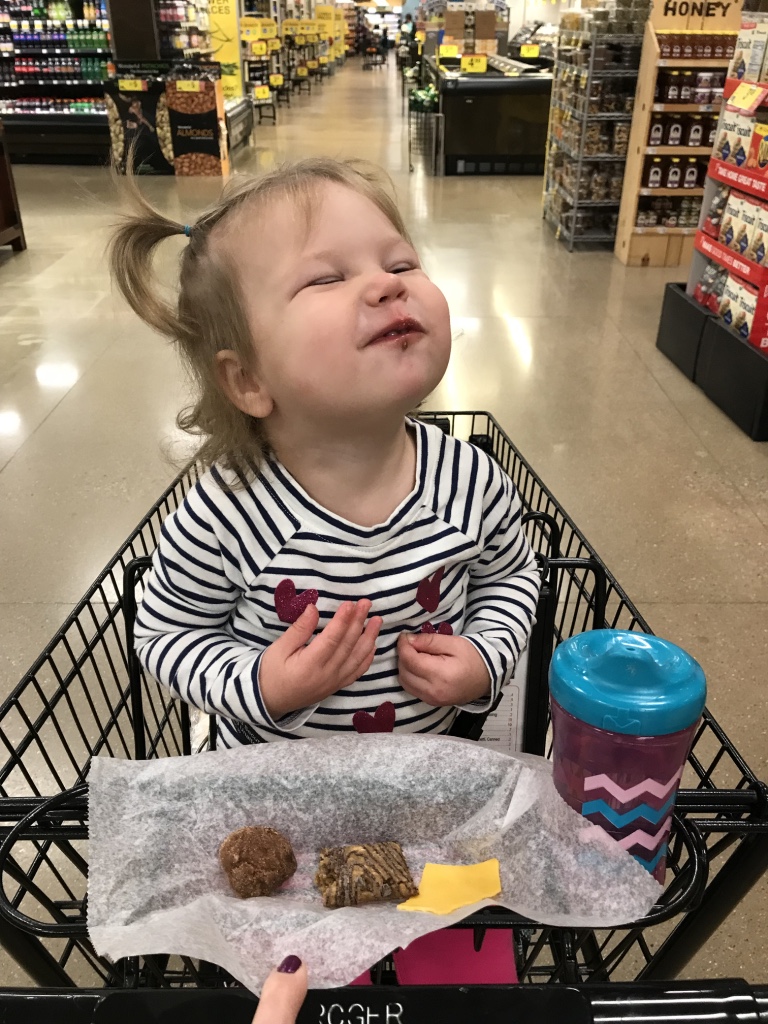 You guys. We had 26 hours without kiddos last week, and it was amazing! From 1:00pm on Thursday until 3:00pm on Friday, we were footloose and fancy kid free! And you wouldn’t believe how much we got done! Matty took the afternoon off, and we went out to lunch before heading to the cottage. We stopped at the outlet mall on our way (woo hoo!). When we arrived at the cottage, we immediately laid down and read for a little bit . . . because we COULD! #nokids
Then we did a little work, ordered a pizza and picked up a movie, ate dinner, watched a movie, went to bed early, slept in a little later than usual, cleaned the boat, purged a bunch of stuff from the cottage, met with the lawn guy about some things, stopped for lunch again and test drove a minivan! It was a fantastic 26 hours! 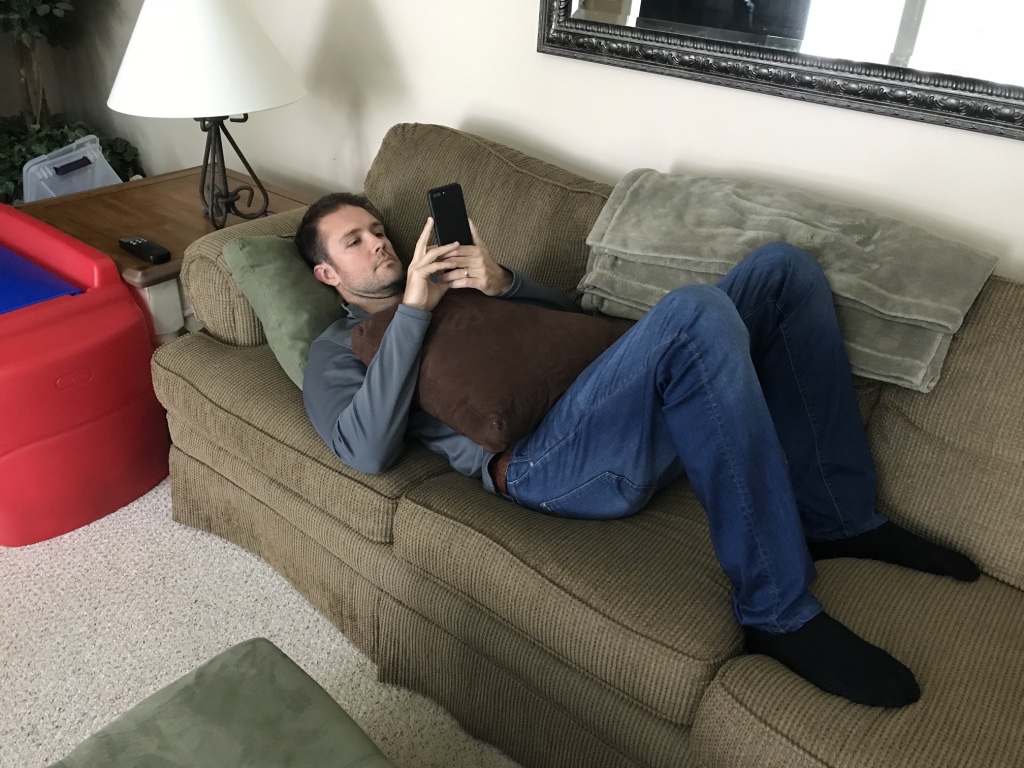 But by Friday afternoon, it was back to reality . . . which apparently means grocery shopping in your puddle jumper! 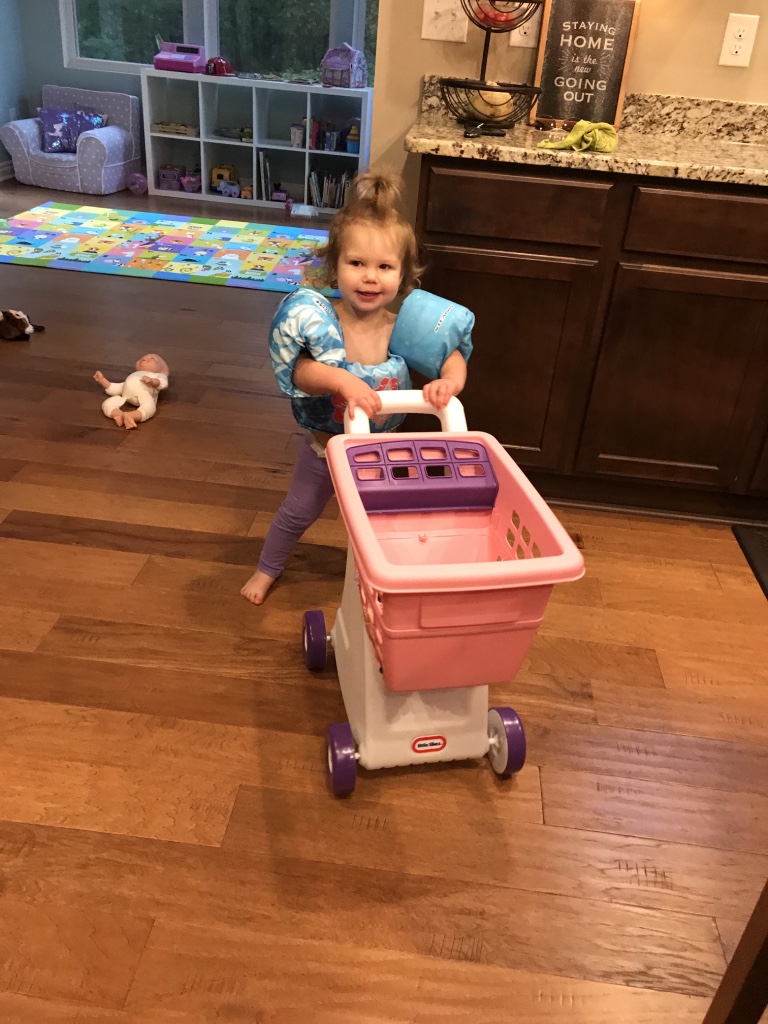 This weekend was Pumpkin Fest here in South Lyon. Saturday was a beautiful morning so we loaded up the wagon and headed into town for the girls’ first parade! 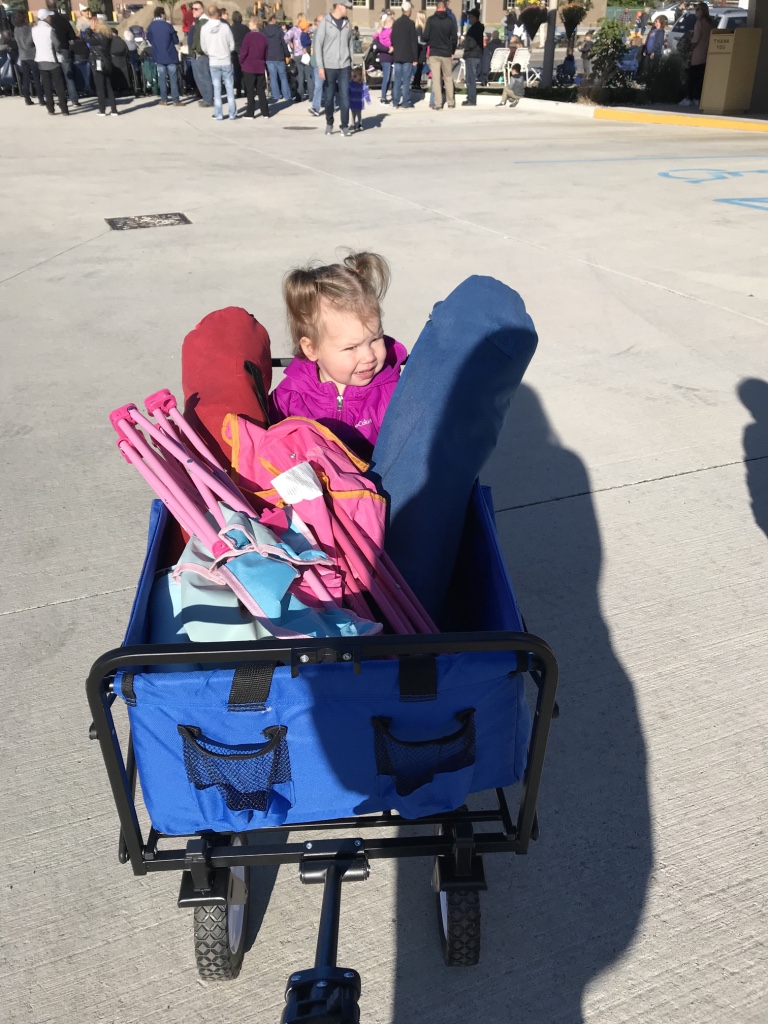 We sat with some neighbors, and the parade was so much fun! The girls loved picking up the things that were tossed their way . . . candy, rubber duckies, mini beach balls, and toothbrushes!

Emily did great! She switched back and forth between my lap and Matt’s and just cried for a quick minute when all the loud fire trucks and police cars were setting off their sirens. 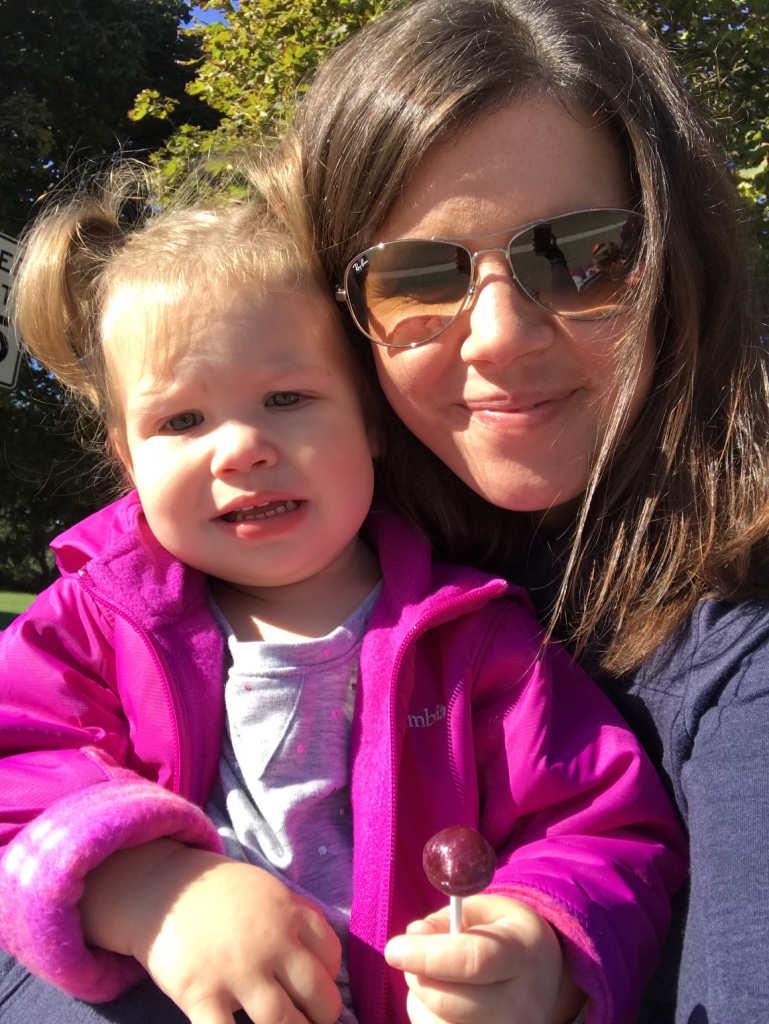 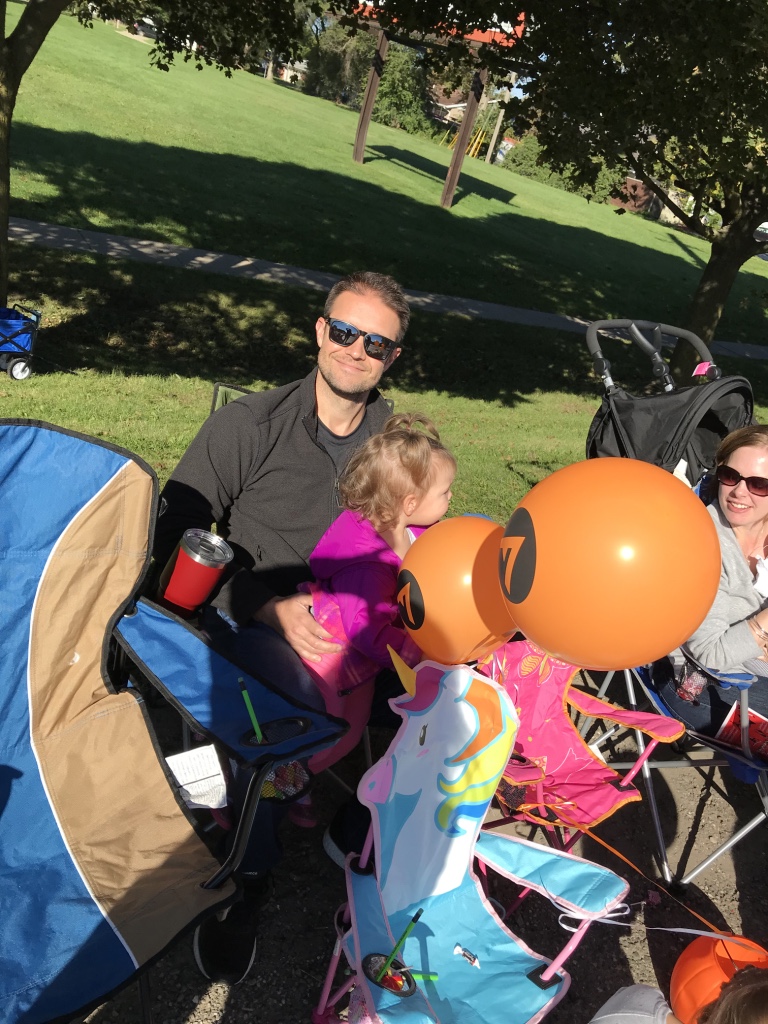 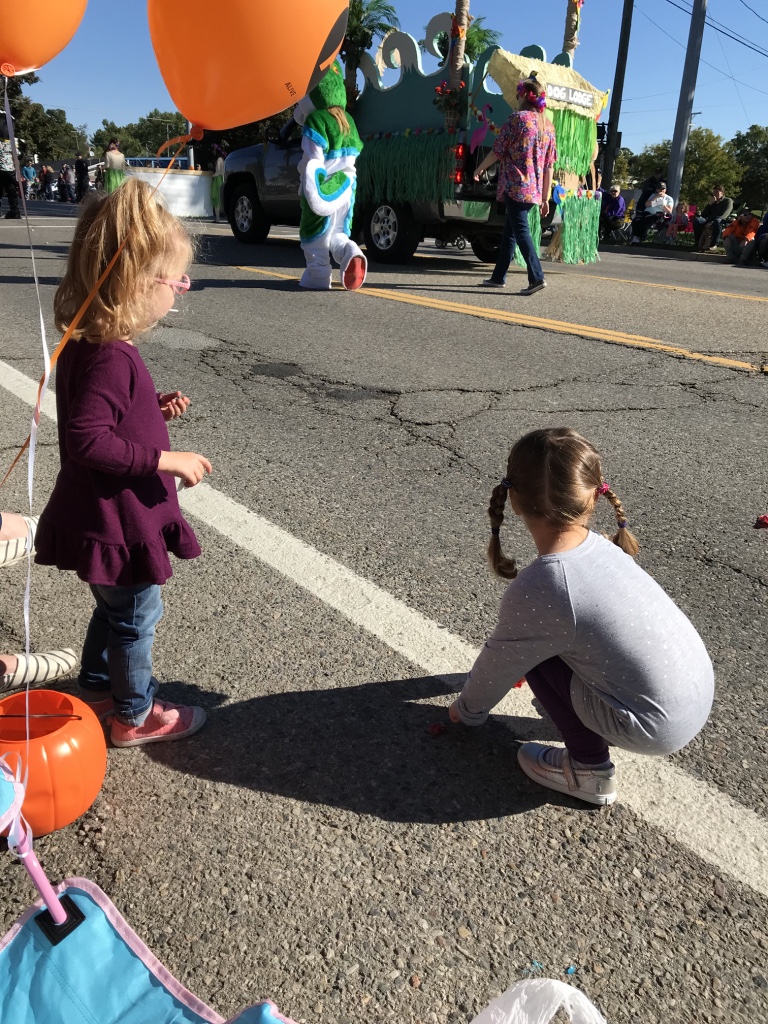 We walked around the festival for just a few minutes, but it was SO CROWDED that we decided to just head home. But not before taking a picture in front of the tower of hay bales and pumpkins. 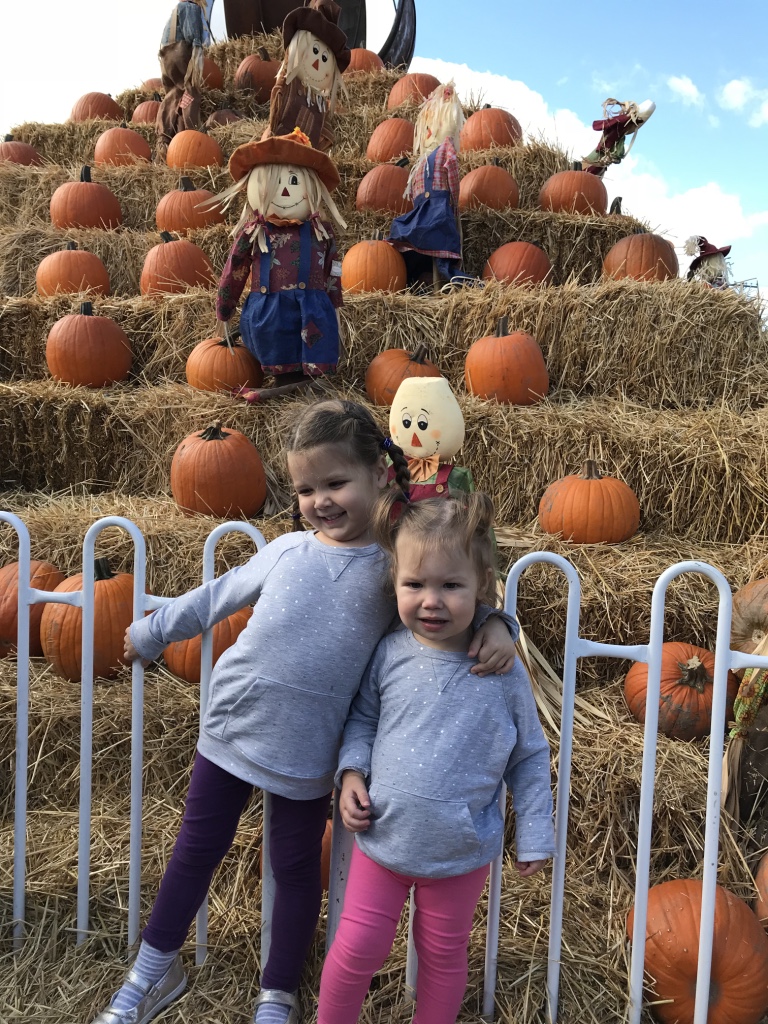 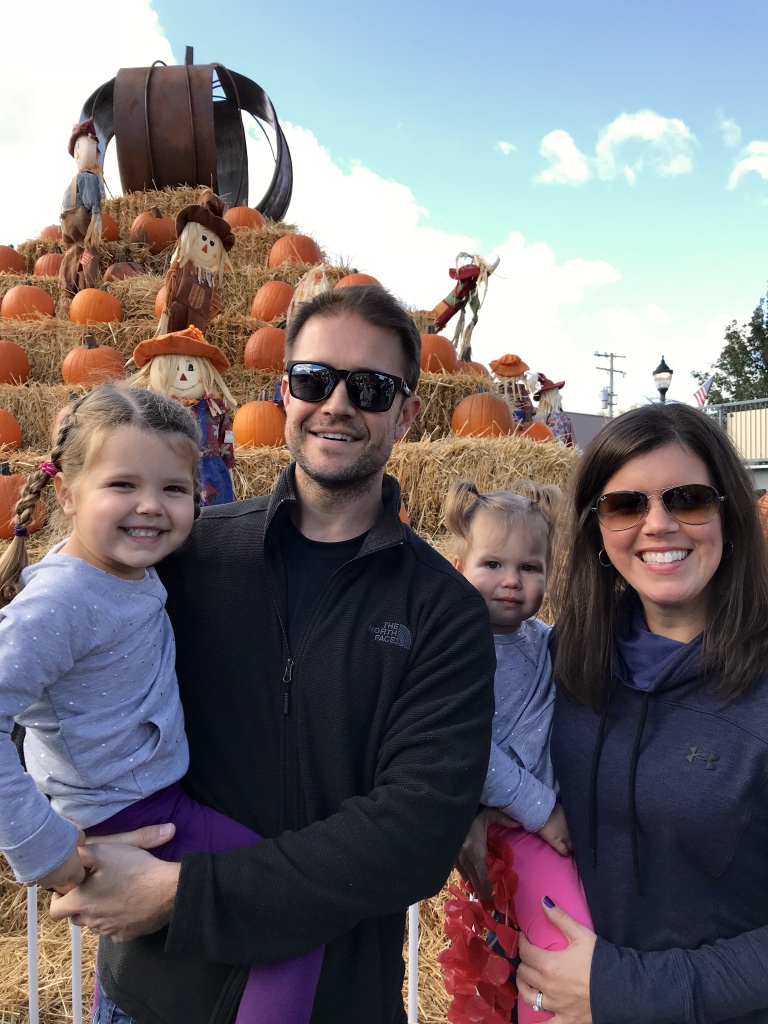 Saturday was beautiful all day long. We spent the afternoon outside playing, eating apple slices . . . 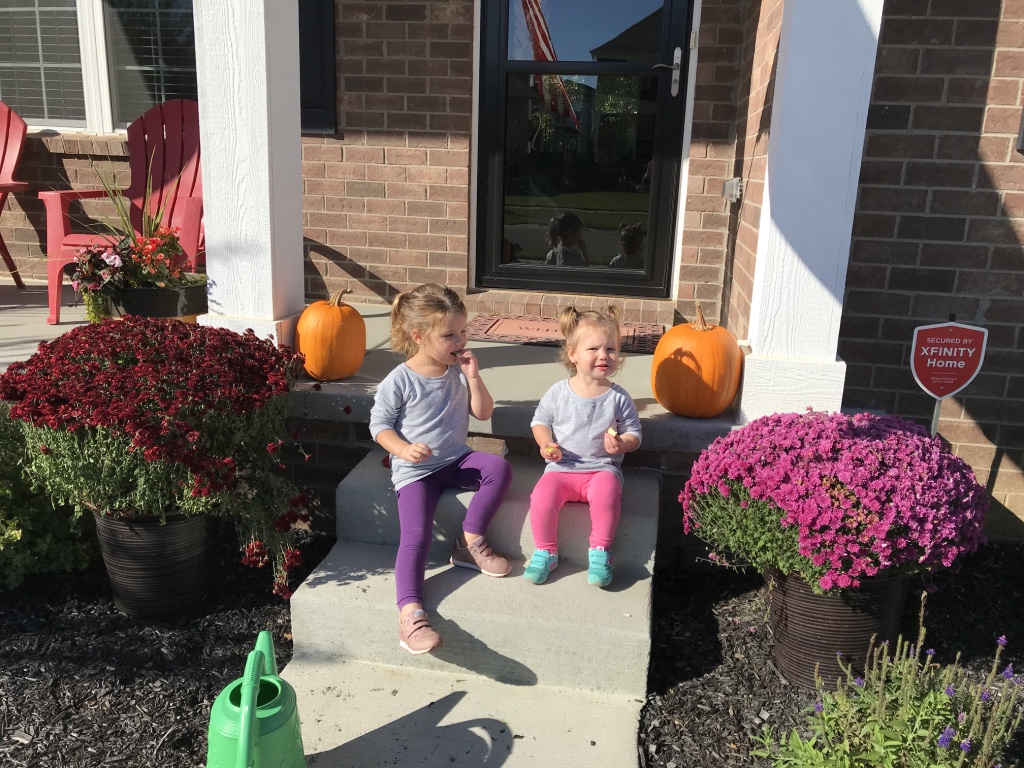 . . . and basking in the late afternoon sun! 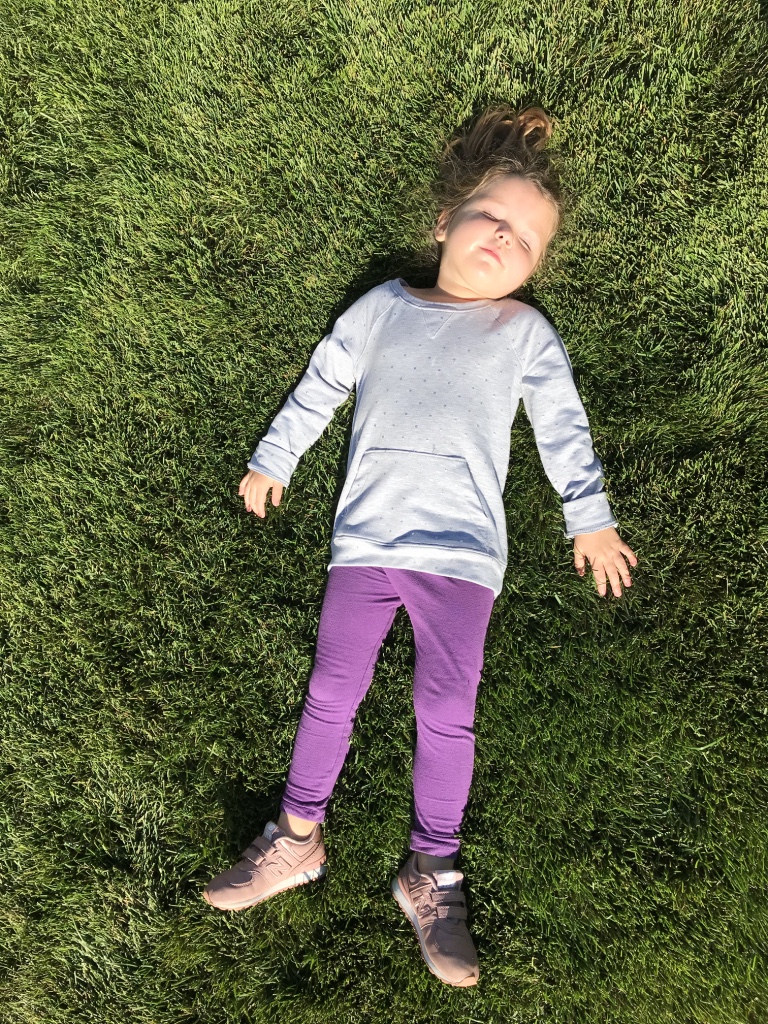 On Saturday evening we went to our neighborhood Euchre party, and it was so much fun! We didn’t get home until after midnight, though, which is about two hours past our bedtime. I was dragging a bit on Sunday morning.
But I rallied and got everyone ready to head to Sadie’s 9th birthday party! It was a unicorn theme and was so so cute! 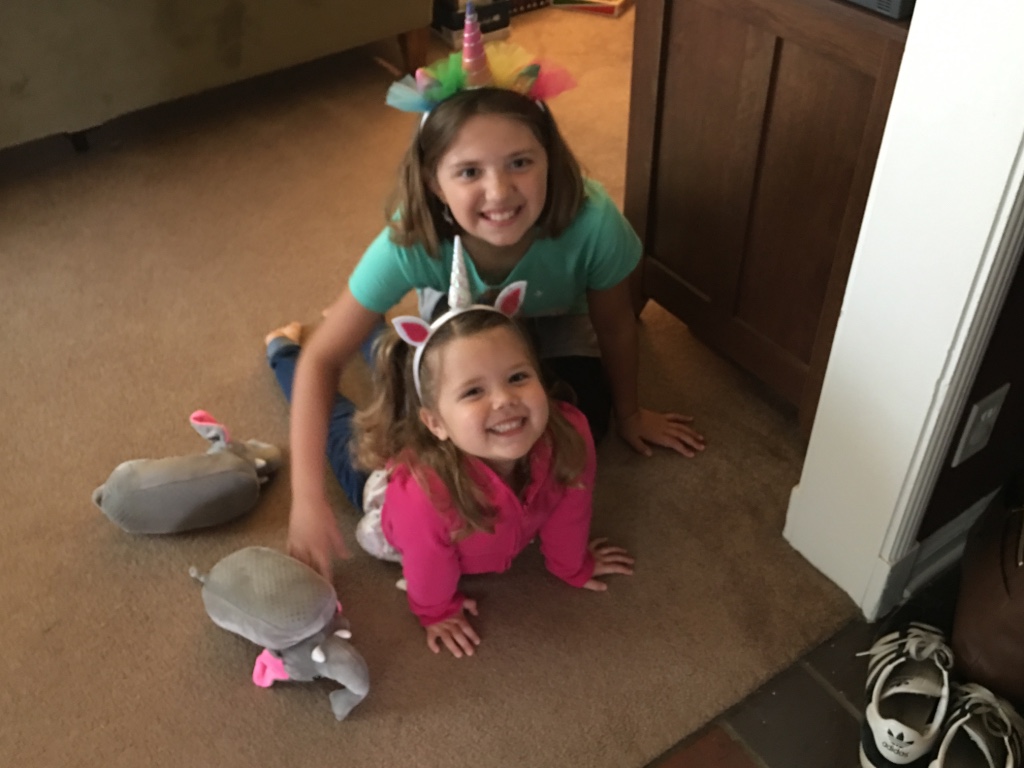 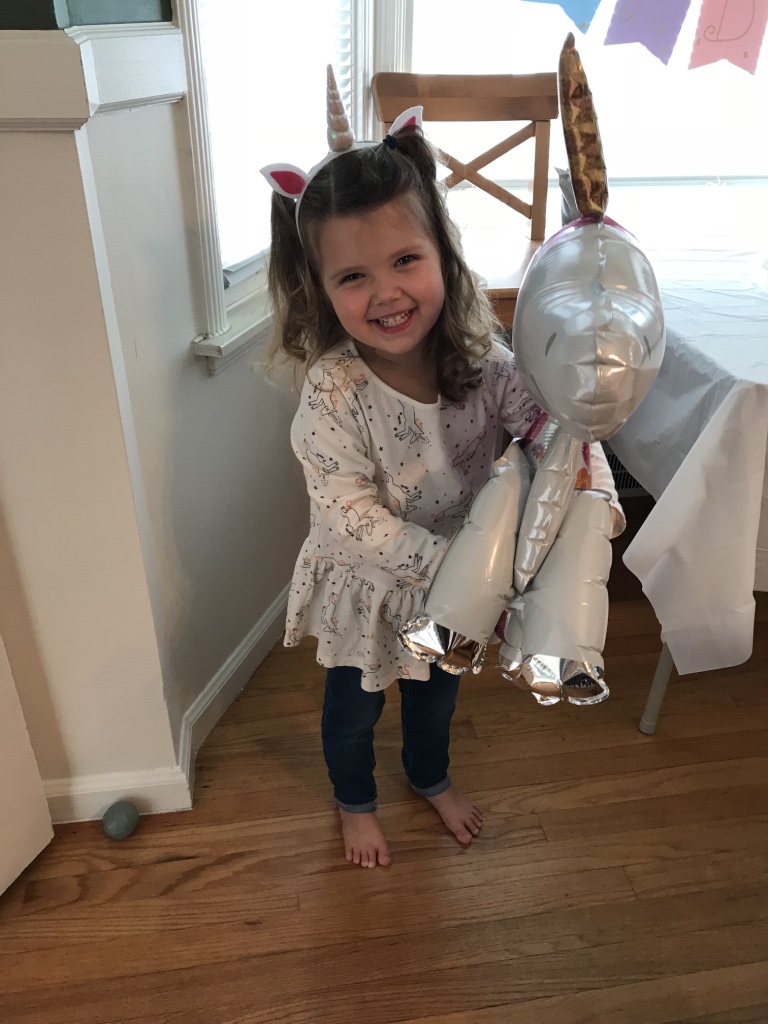 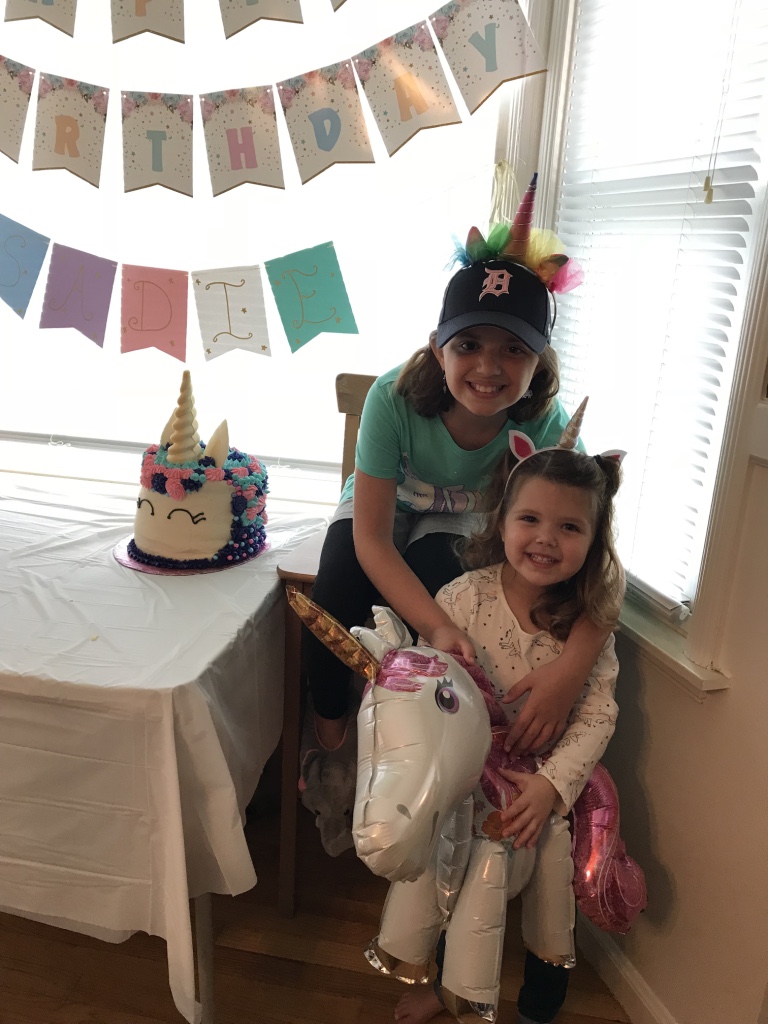 This picture of Sadie’s 3rd birthday popped up in my Facebook memories yesterday, so I had to pair it with Sadie posing with a 3 year old Lulu at her party this year. So. Cute. 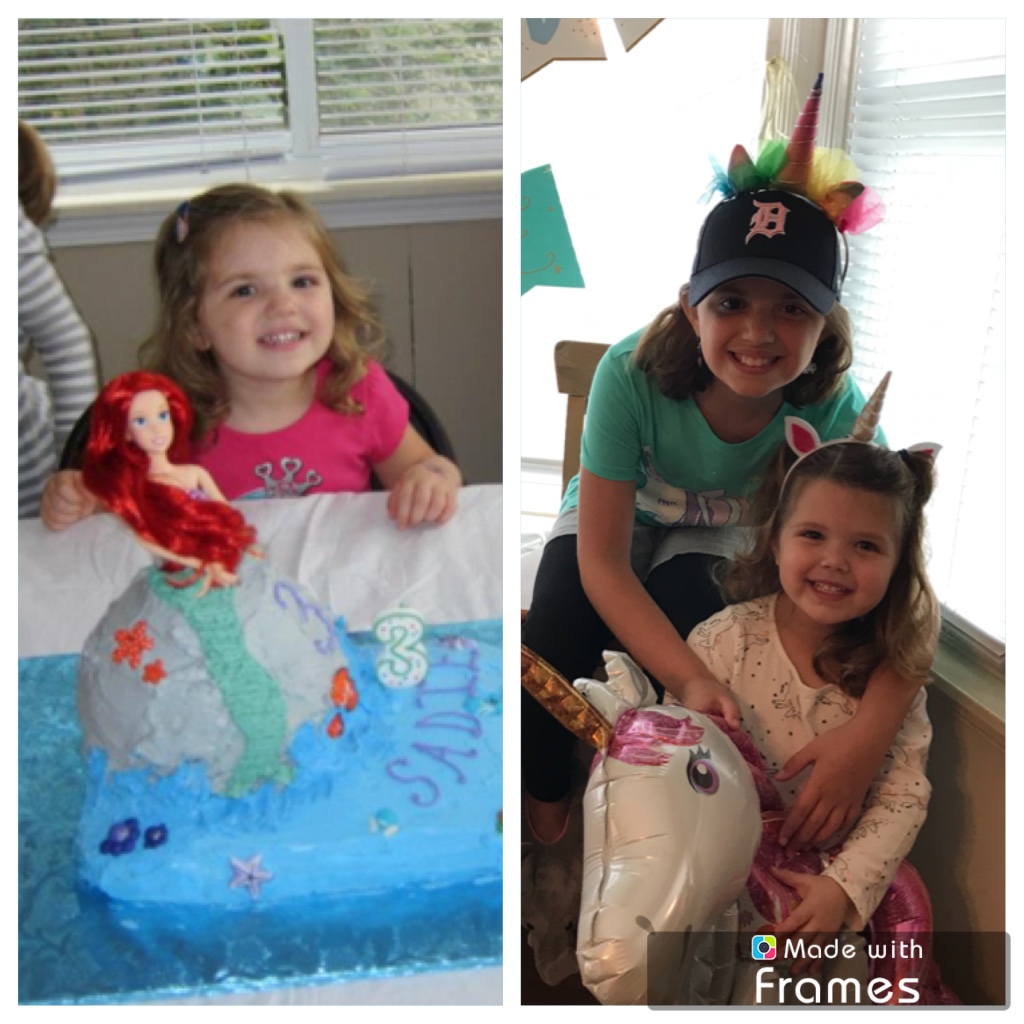 For some reason, I cannot get the picture of the entire cake to load, but Carla humored Sadie and helped her bake a 6 layer unicorn cake with rainbow cake layers! It looked amazing! 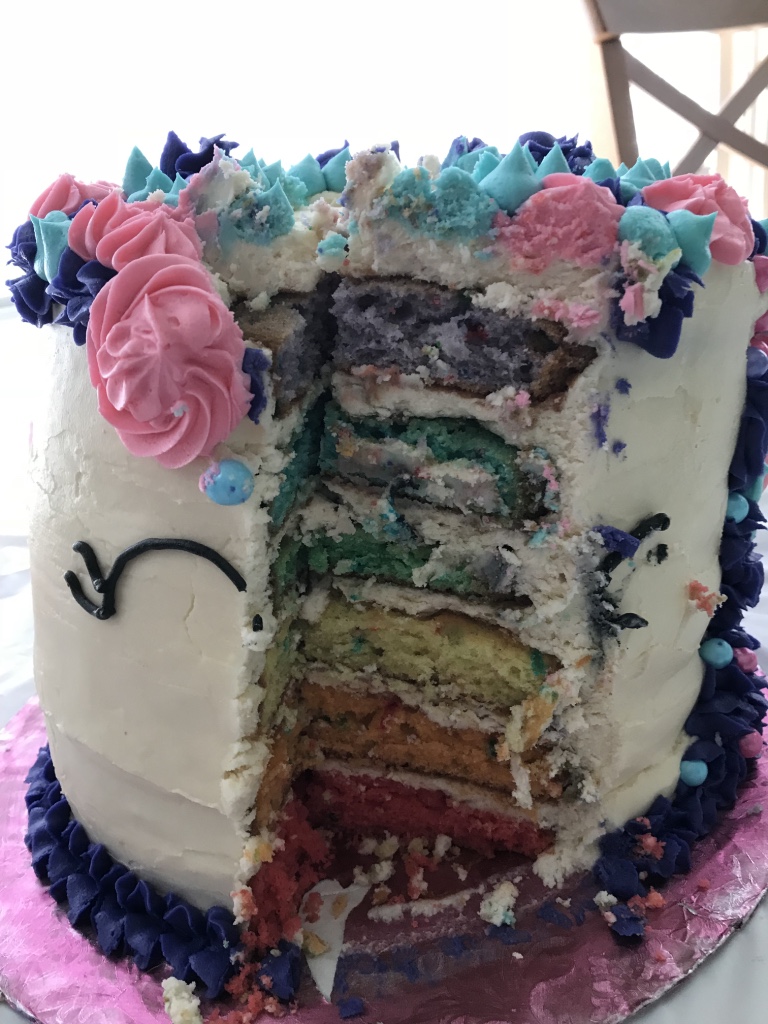 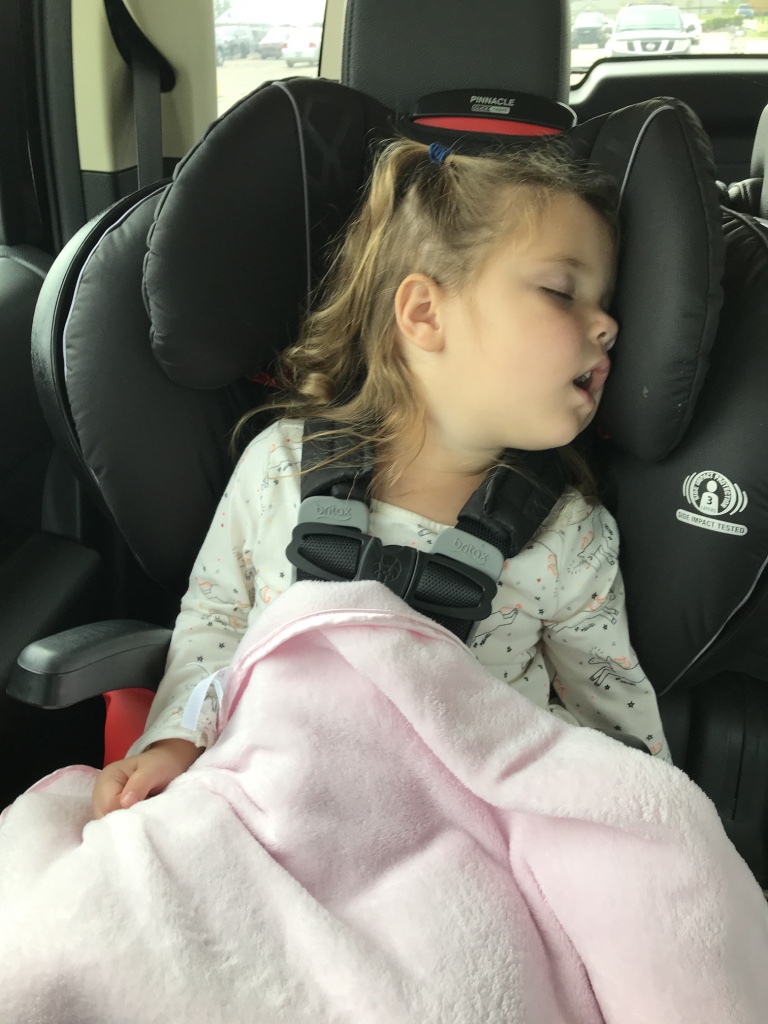 After a quick stop at the grocery, we were home and ready to play outside with our neighbor’s super cool bubble wand. 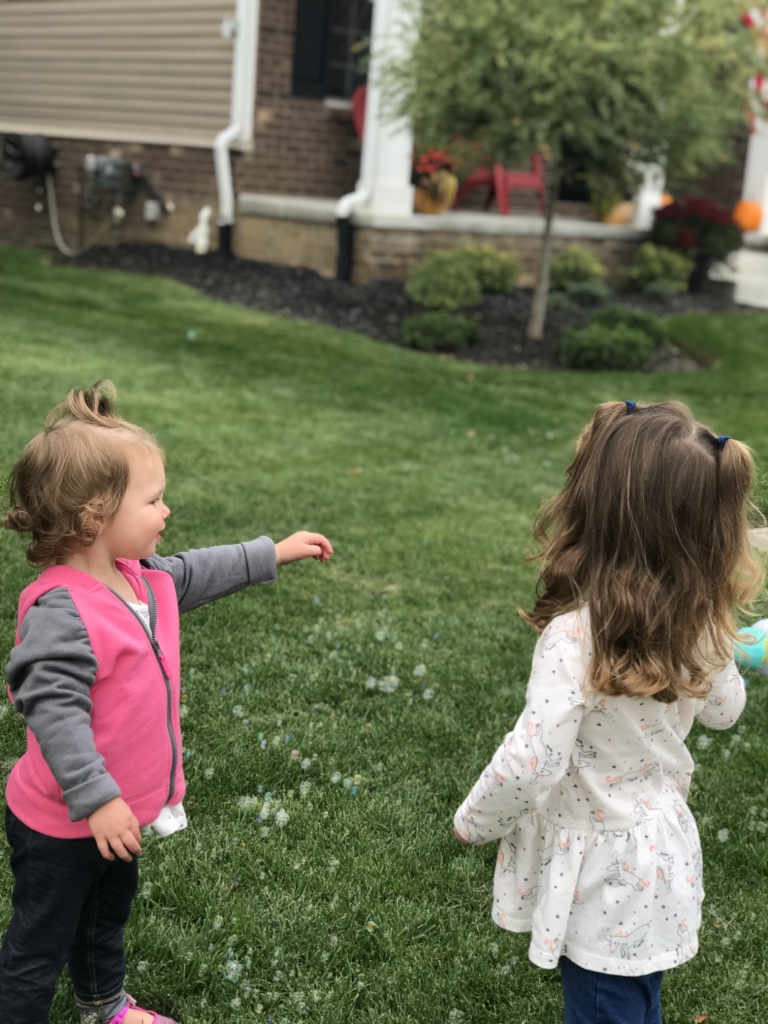 We pulled out the Halloween costumes again after dinner, and Emmy is warming up to them! 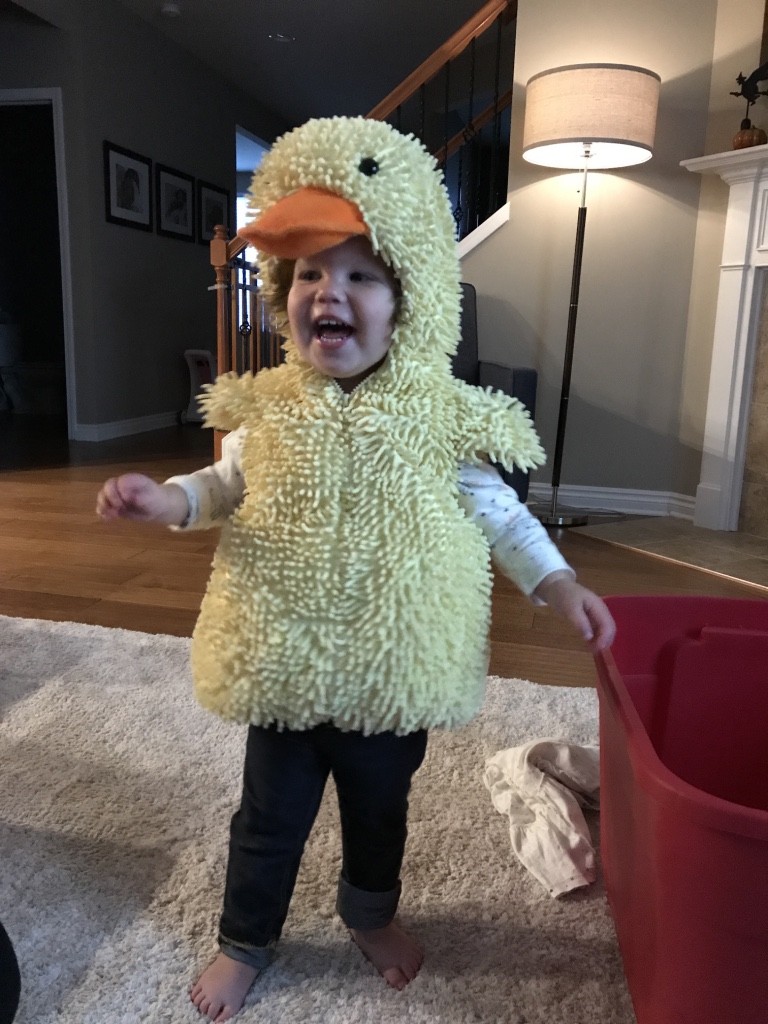 I’ve got a busy week ahead. I’m hosting a Mom’s Night Out on Friday (!!!), so I’ve strategically spread out my to-do list throughout the week to make the prep work easier.
I’ve also got some work to do for a special Halloween inspired blog post for next week!
Hope your week is a good one!
XOXO