It’s very rare that we have a string of several poor behavior days in a row, but Tuesday marked day five of some challenging days at the Kissel house! Emily’s clinginess is at an all time high, which I’ve accepted, but something happened with Lucy and she’s gone bananas since Friday evening! Crying at the drop of a hat, tantrums, not sleeping in as much as usual, hitting, pushing, general misbehaving and not listening. It all caught up with me on Tuesday, and we had one of the worst days we’ve had in a long time. Don’t get me wrong, I know how very lucky I am to get to stay home with the girls, but some days . . . man, oh man!
As usual, JUST when I think I won’t make it through another day, something switches back and things go back to normal . .  and that happened yesterday. Here’s hoping it’s smooth sailing from here on out. Or at least for a few days. #realist
We had a play date on Monday which called for a fancy hairdo for Lucy! 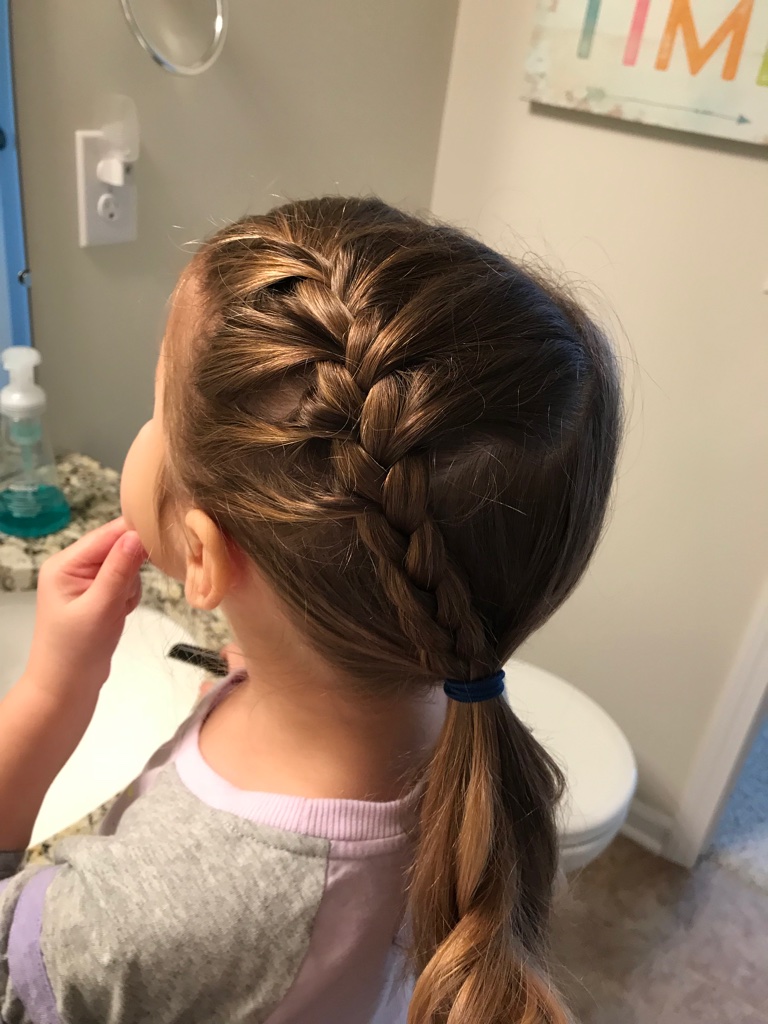 Amelia has a clubhouse in her playroom, and the girls had a great time baking cookies and playing inside. 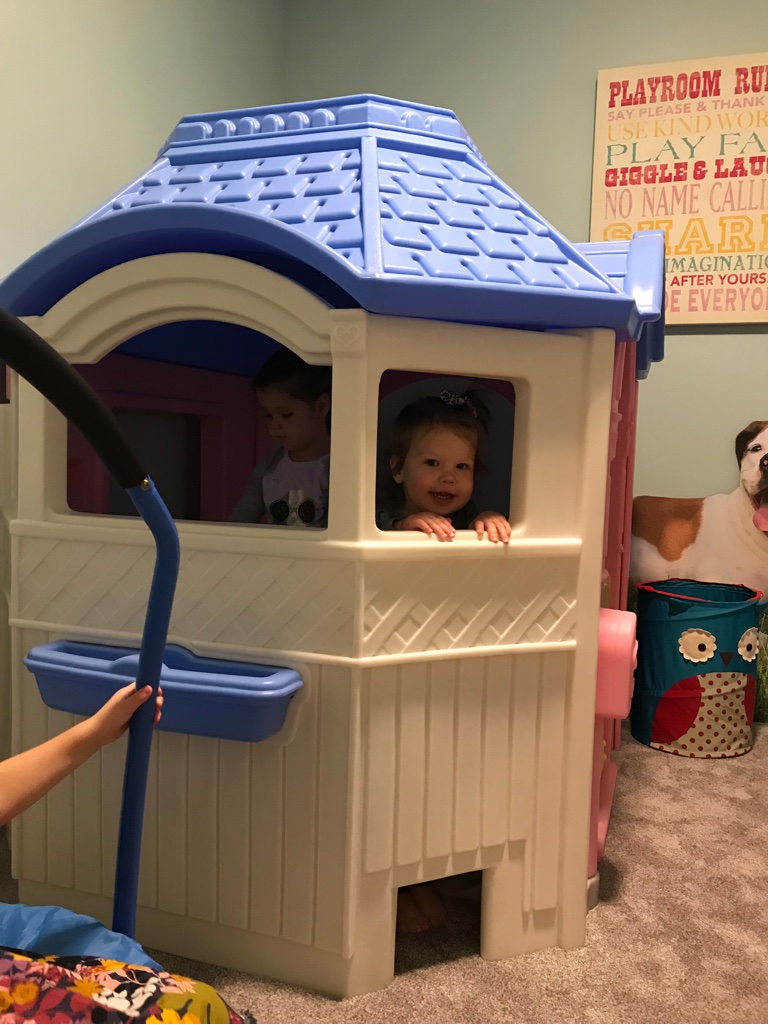 Lucy asked to hold baby Eliana, and it was cuteness overload! 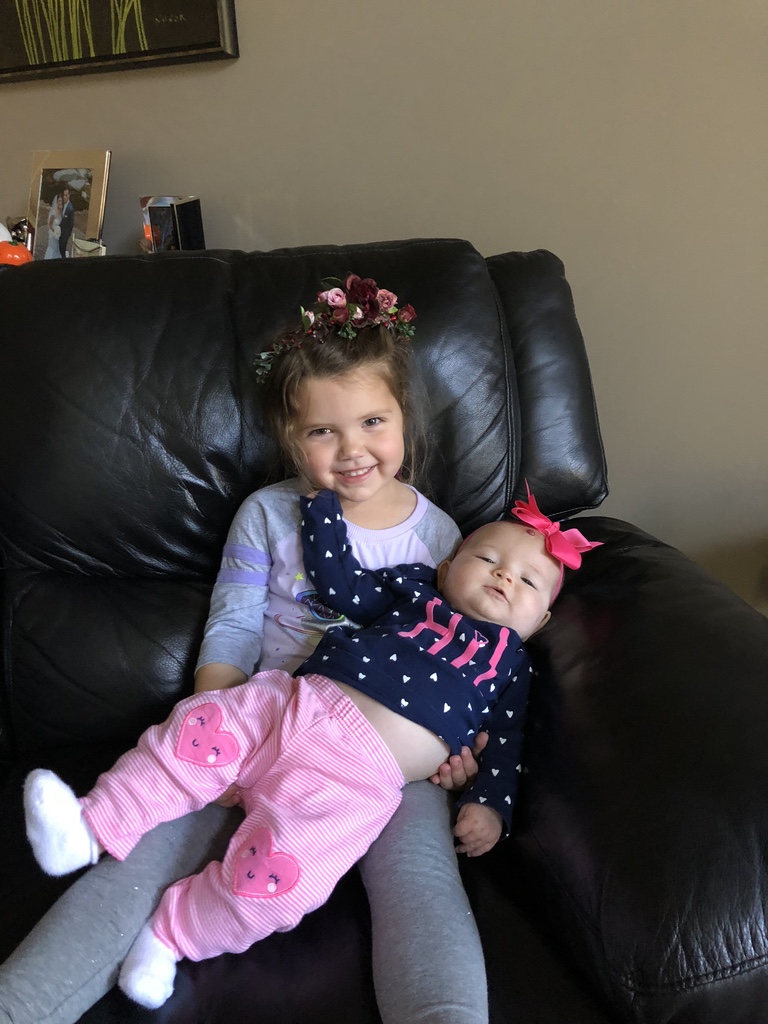 Did you see yesterday’s blog when I said suckers were not my favorite treat for the girls? This is why! You should have seen her hands . . .and arms! 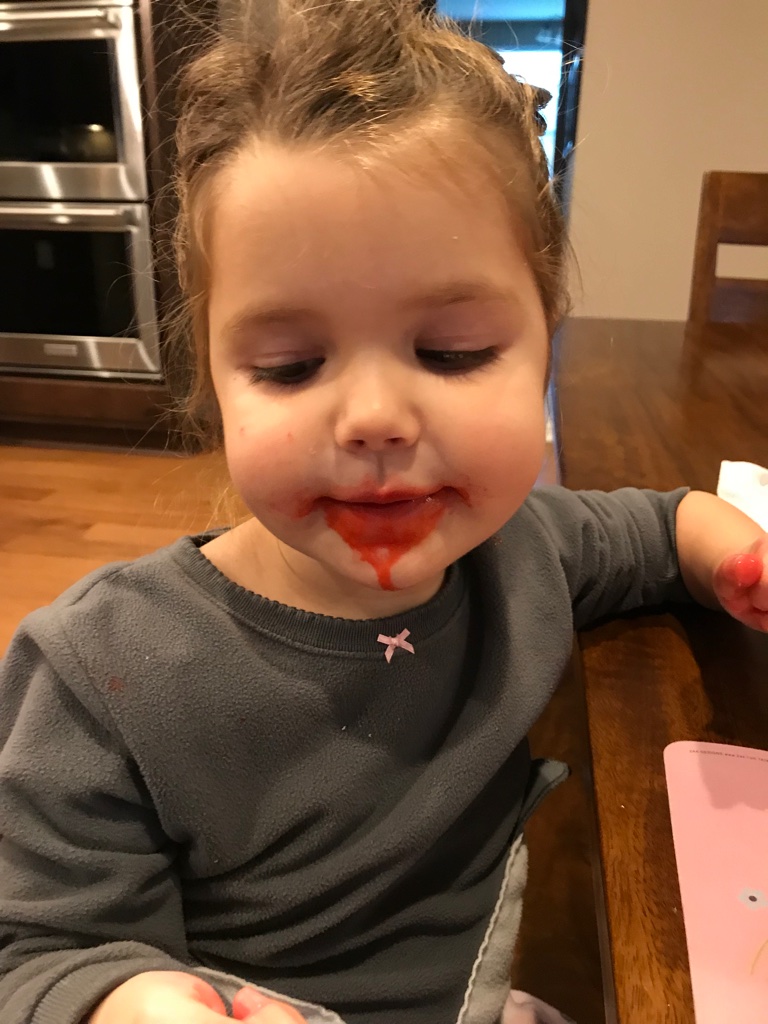 The girls have been loving the full moon on our walks the past few evenings. 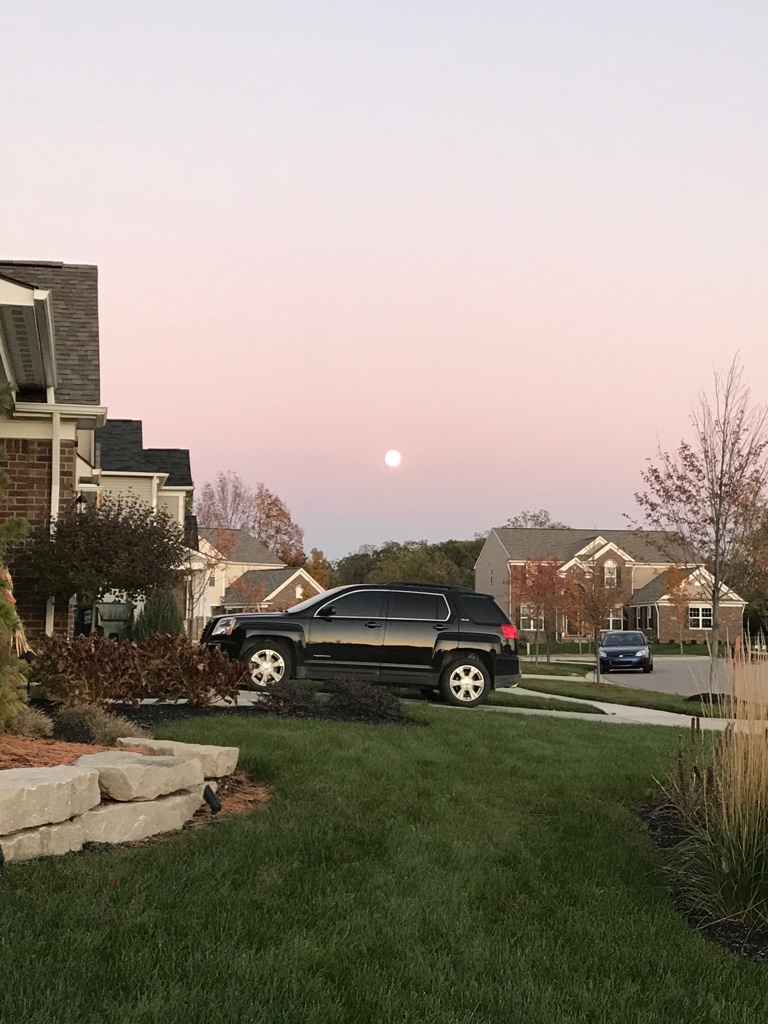 Matching Halloween dresses for the win! I wish the black tutu part didn’t blend in with the fireplace. #oops 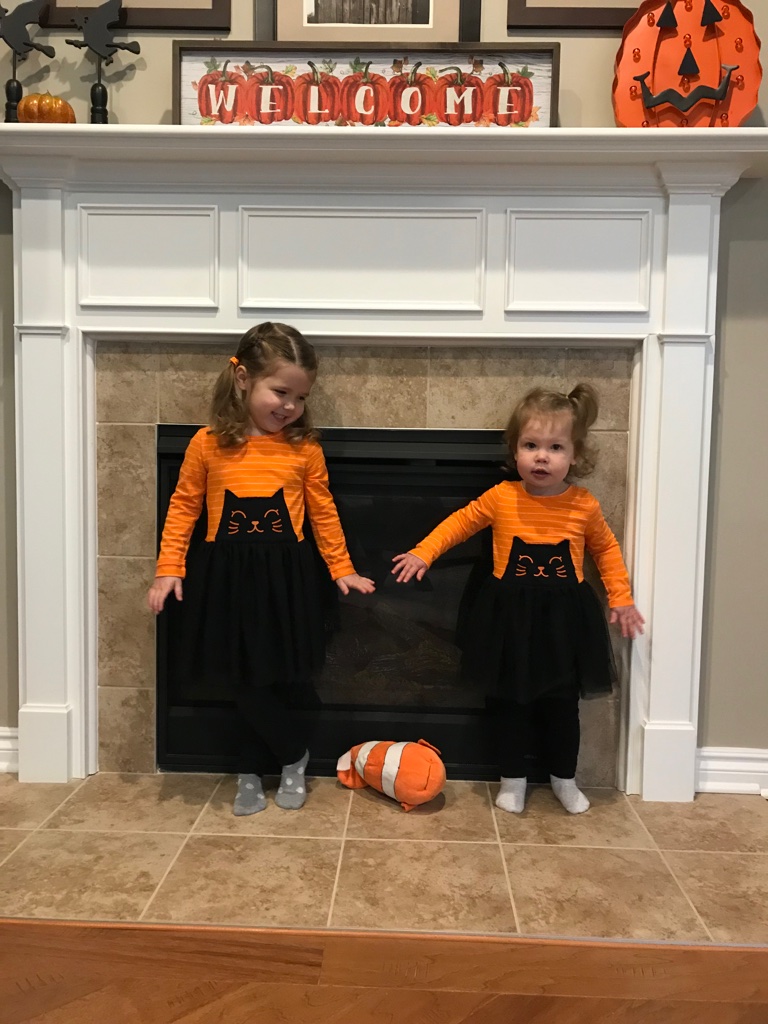 Emmy and I ran to Meijer while Lu was in school on Tuesday, and she got to ride the penny pony twice! 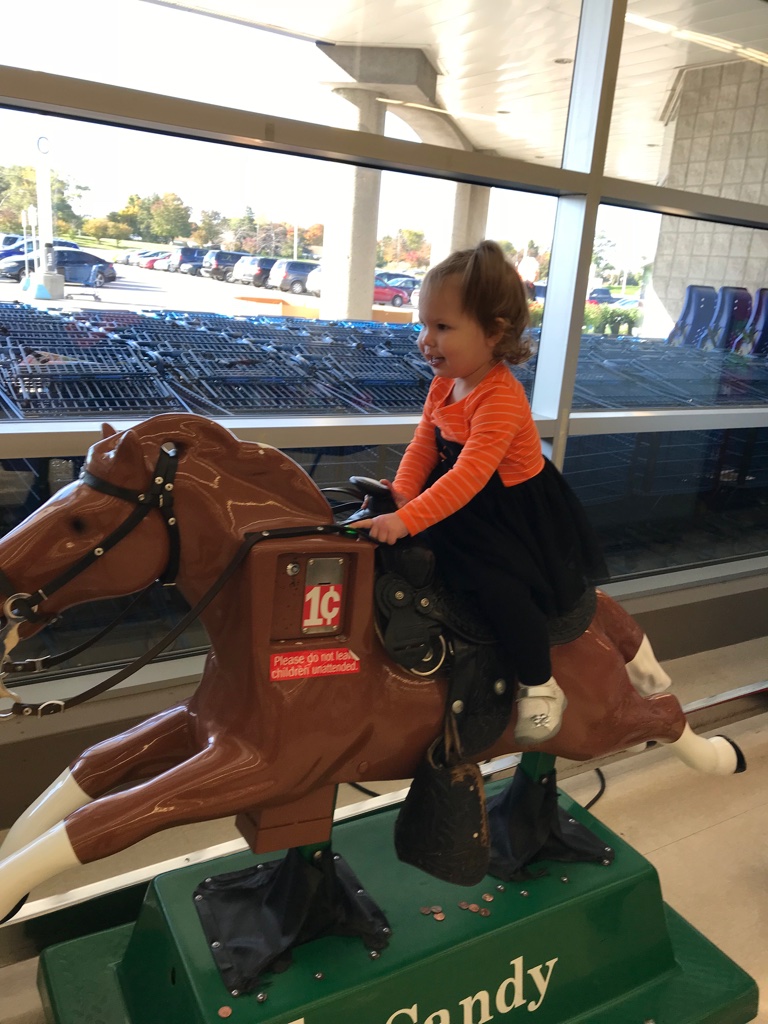 She also helped me with the vacuuming while I put away the groceries. 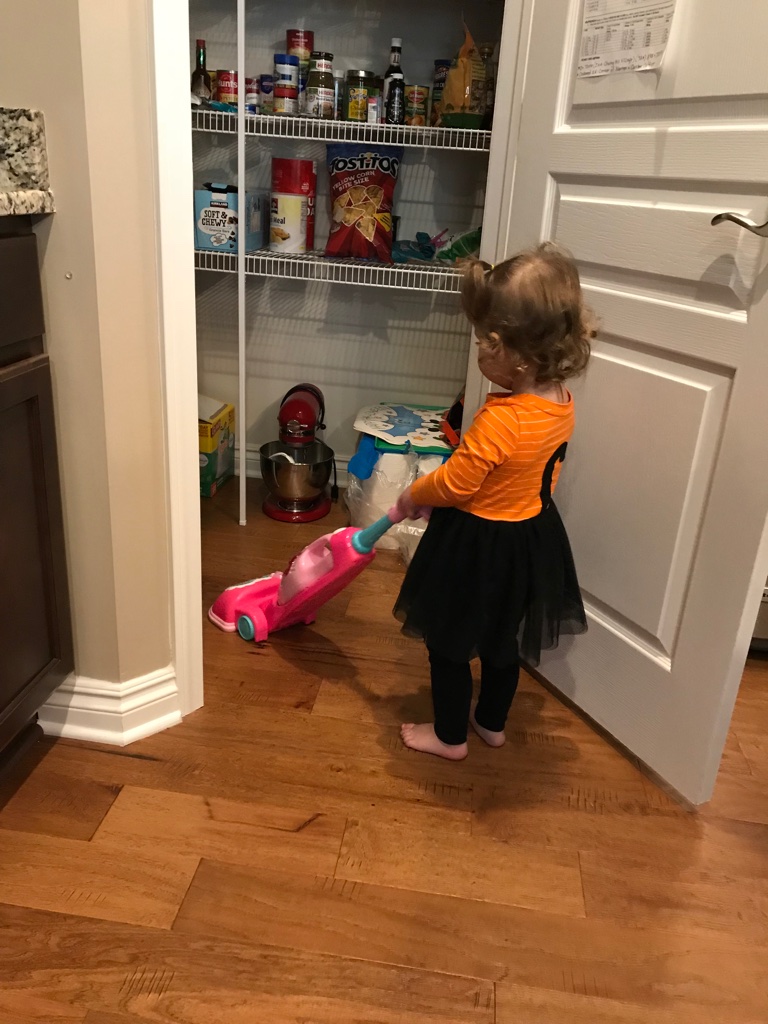 Somebody hand me a spoon! Lucy and I started to bake cookies during nap time on Tuesday, and Ems woke up halfway through the process after only napping for like 45 min. I think that’s when the afternoon started to go downhill! 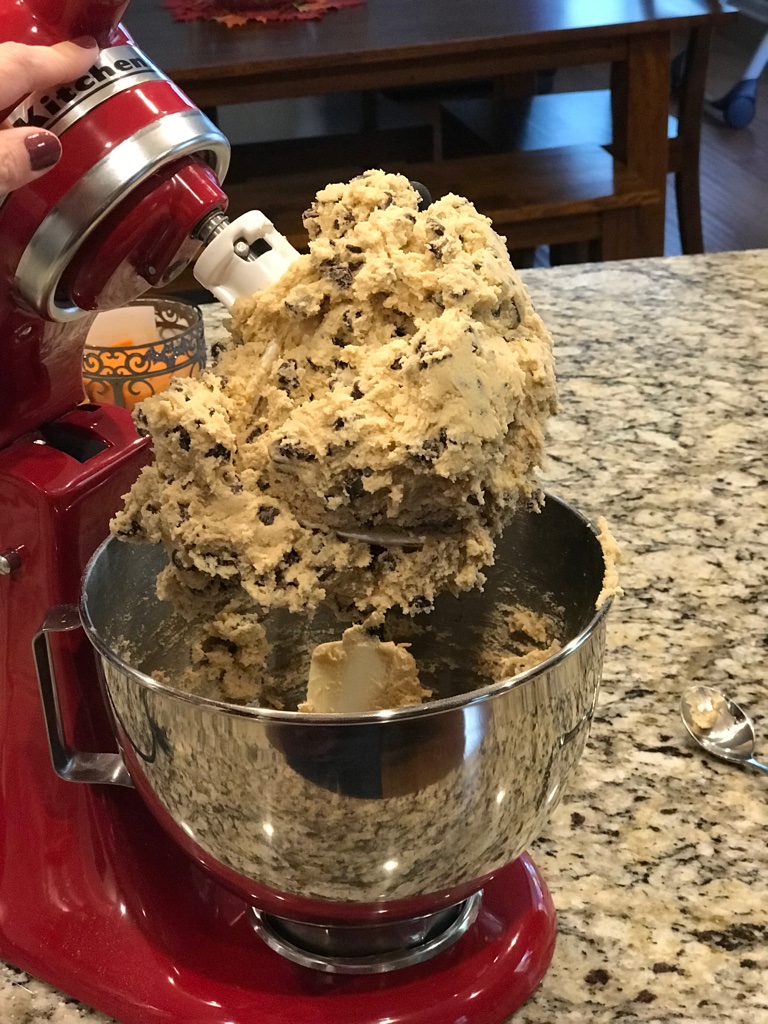 The longer the dough sits out, the flatter the cookies get. I do NOT like a flat cookie, so I tried to grab Ems from her crib quickly and keep the girls busy while I put the cookies on the sheets and into the oven. These Halloween pencils and a random bowl did the trick for about five minutes. 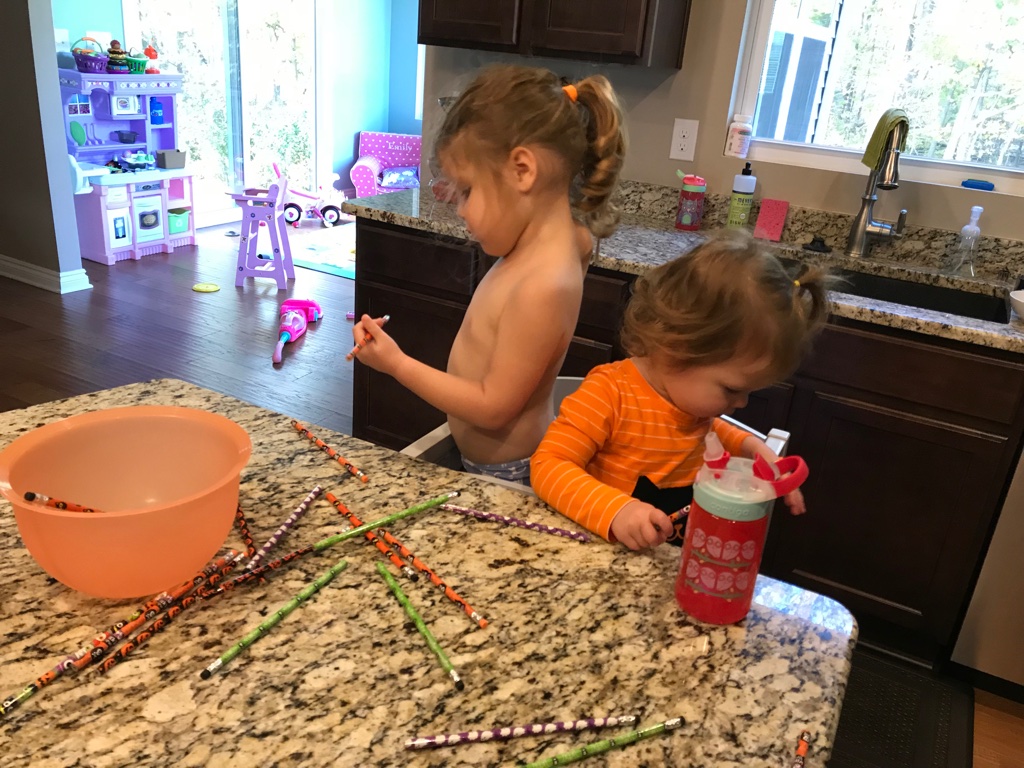 And then Lucy pushed Emmy out of the way so Emmy bit Lucy. And all hell broke loose for about two hours. #notjoking 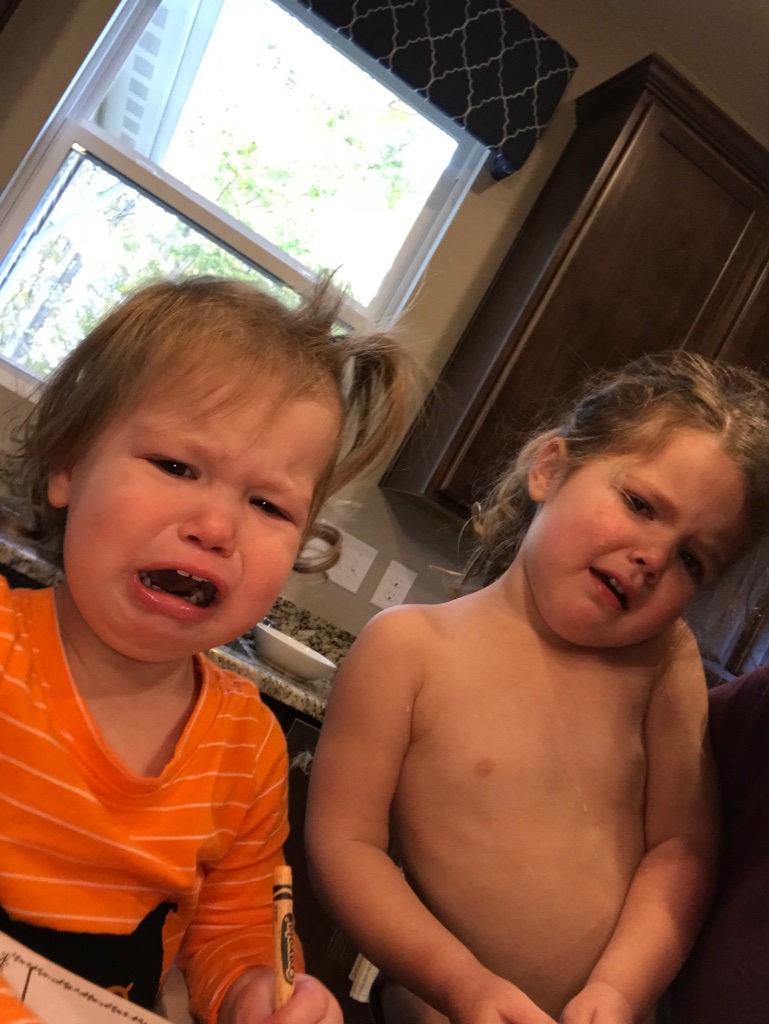 And then just like that, things got better and they couldn’t stop smooching one another! 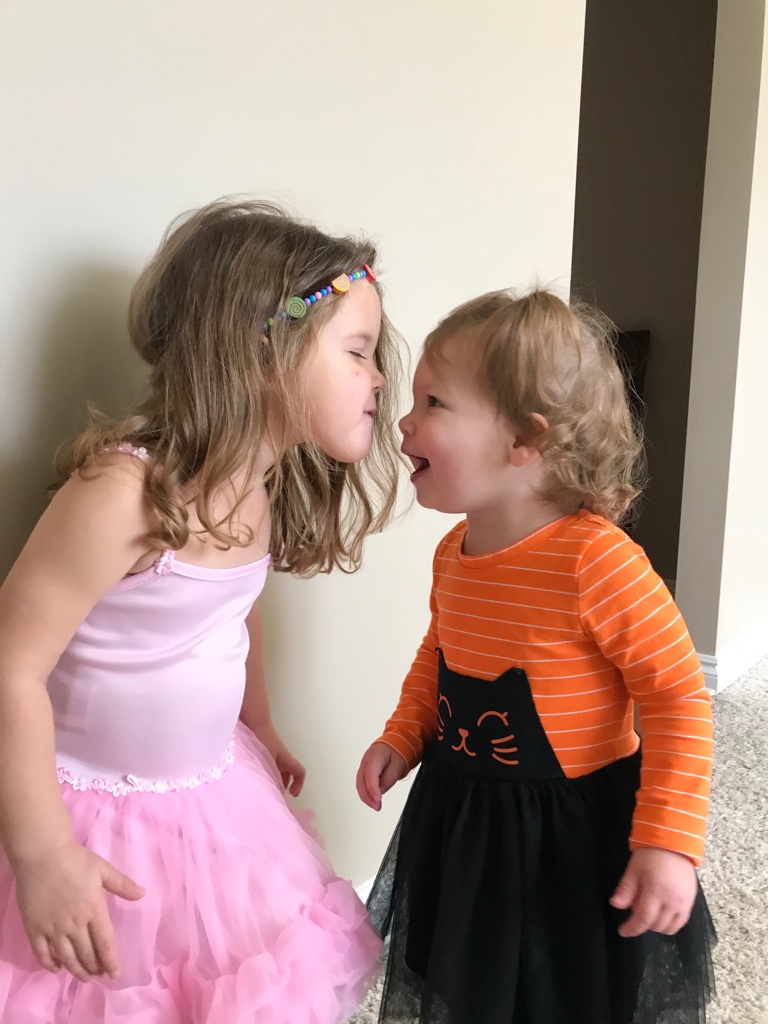 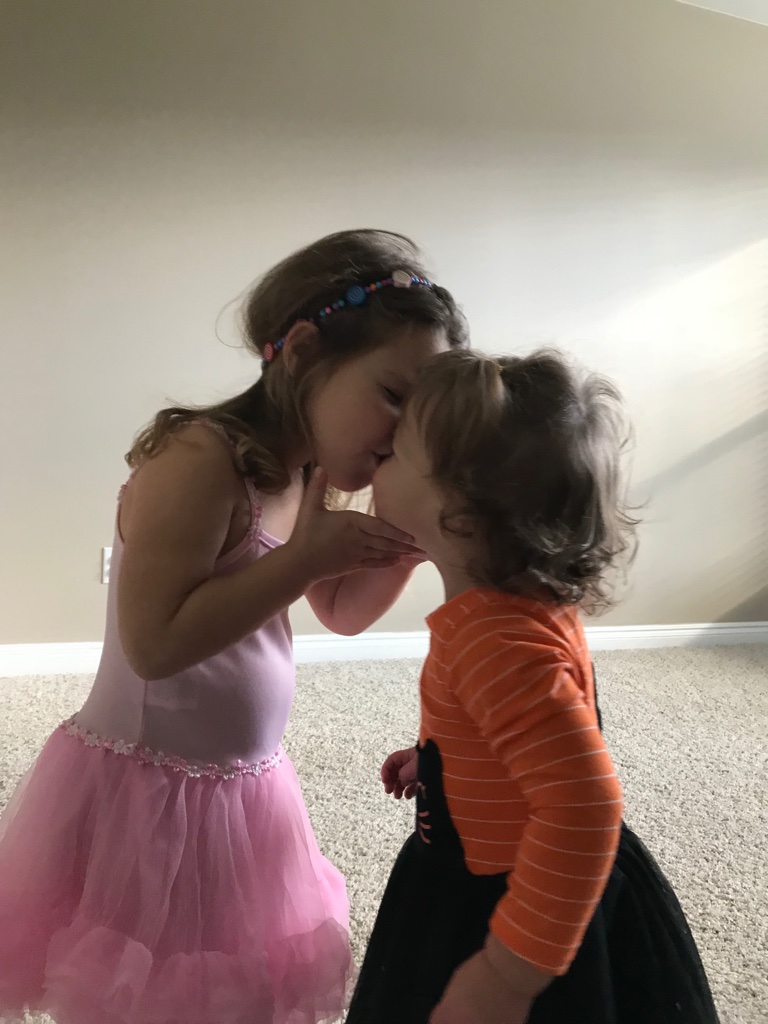 They kissed and made up over a banana snack . . . until Emmy reached over and broke Lucy’s banana in half. #iwishiwaskidding #imnot 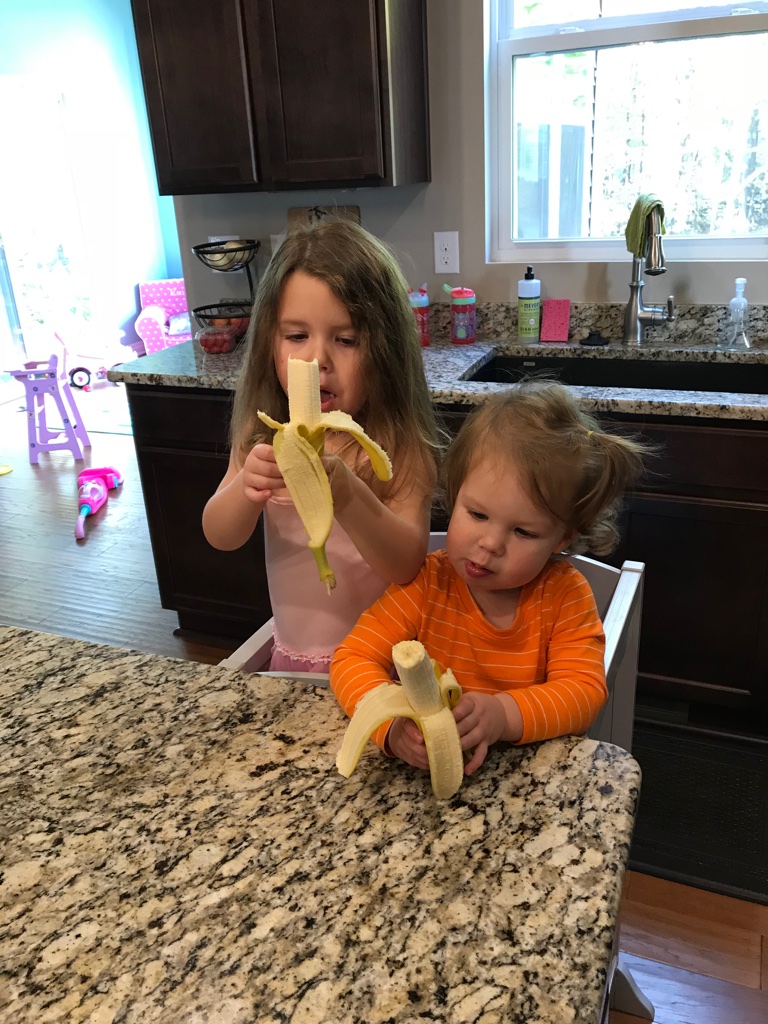 There is nothing cuter than Emmy Roses in her crib in the morning. Half the time she prefers to take her morning milk in her crib, and the other half she snuggles with me on the rocking chair. 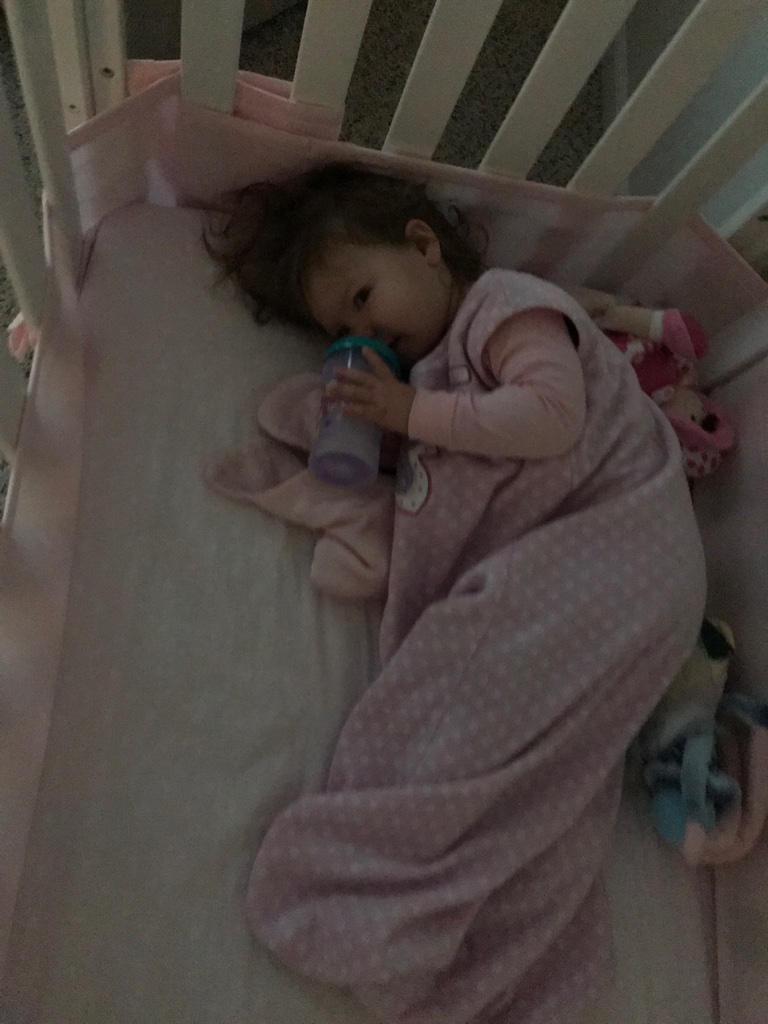 It’s a rare occasion when I don’t get the dishwasher emptied before the girls wake up. When I do have to empty it with them awake, Ems is never far away! 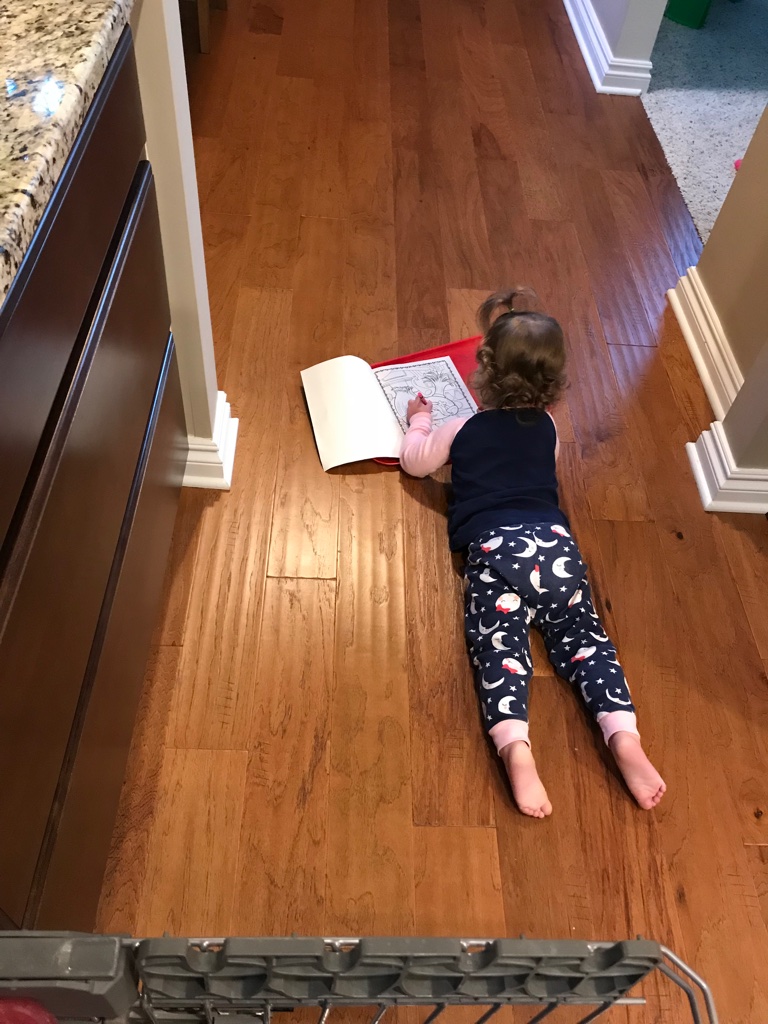 I gave the girls a new cereal bar for breakfast yesterday morning. Emmy gobbled hers right up. Lucy nibbled on hers and then declared she didn’t like it and wouldn’t eat it again. So . . . I gave it to Emmy, which apparently was a huge mistake. This tantrum went on for about 15 minutes. #heavenhelpme 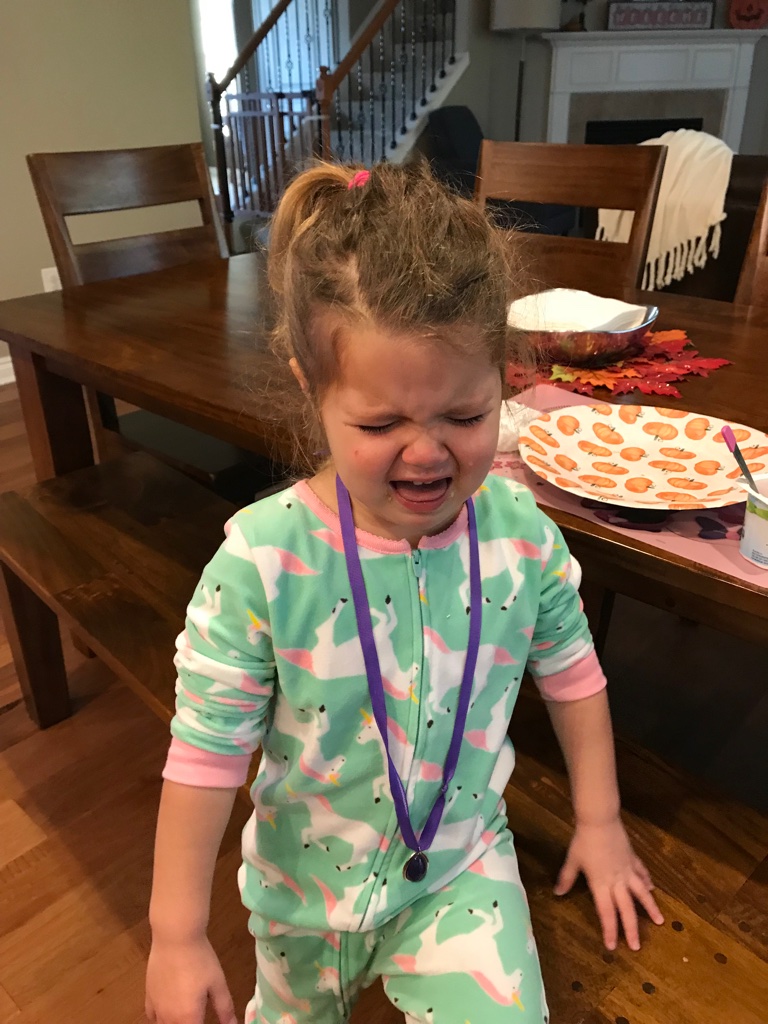 Emmy wasn’t bothered at all. She scarfed down the cereal bar and then continued to paint her face with yogurt. 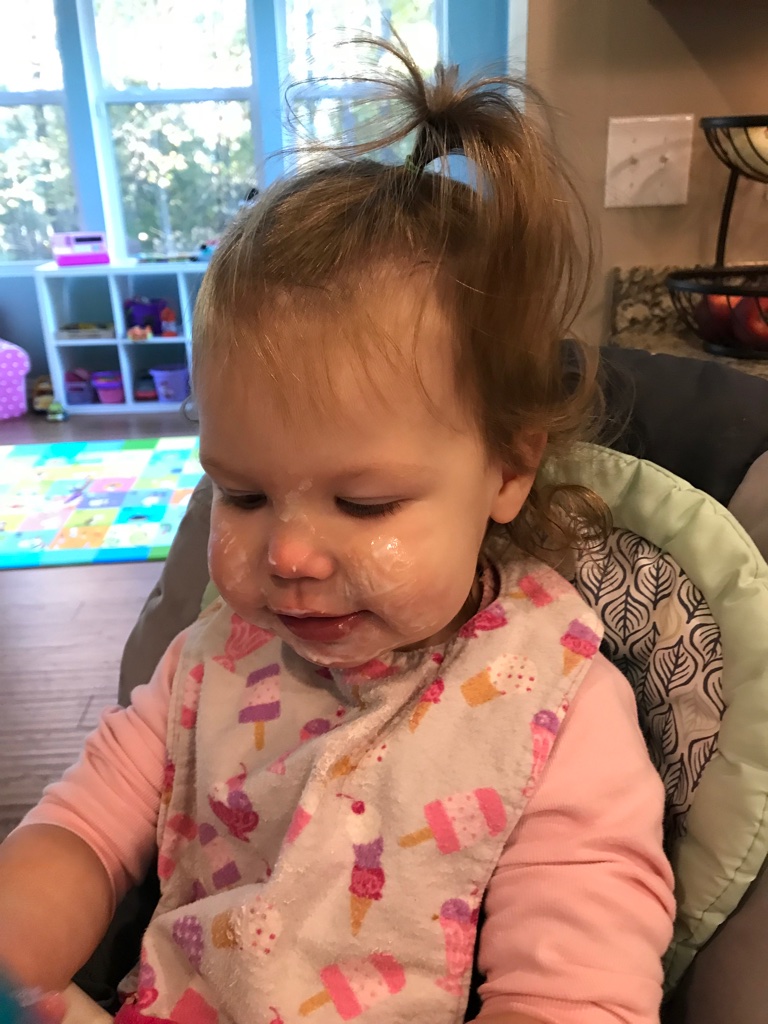 I had some returns that I really wanted to cross off my list, so I loaded the girls up and we headed to the mall. I’d be lying if I said I wasn’t a little hesitant about how the day would go in light of recent behaviors. However, I was very pleasantly surprised, and we had a great time!
We stopped at Nordstrom to get the girls sized for boots . . . and ended up buying the cutest ones ever! Also, there is a giant fish tank in the kids shoe area, and the sweet sales girl gave each girl a pink balloon! Everything was going my way! 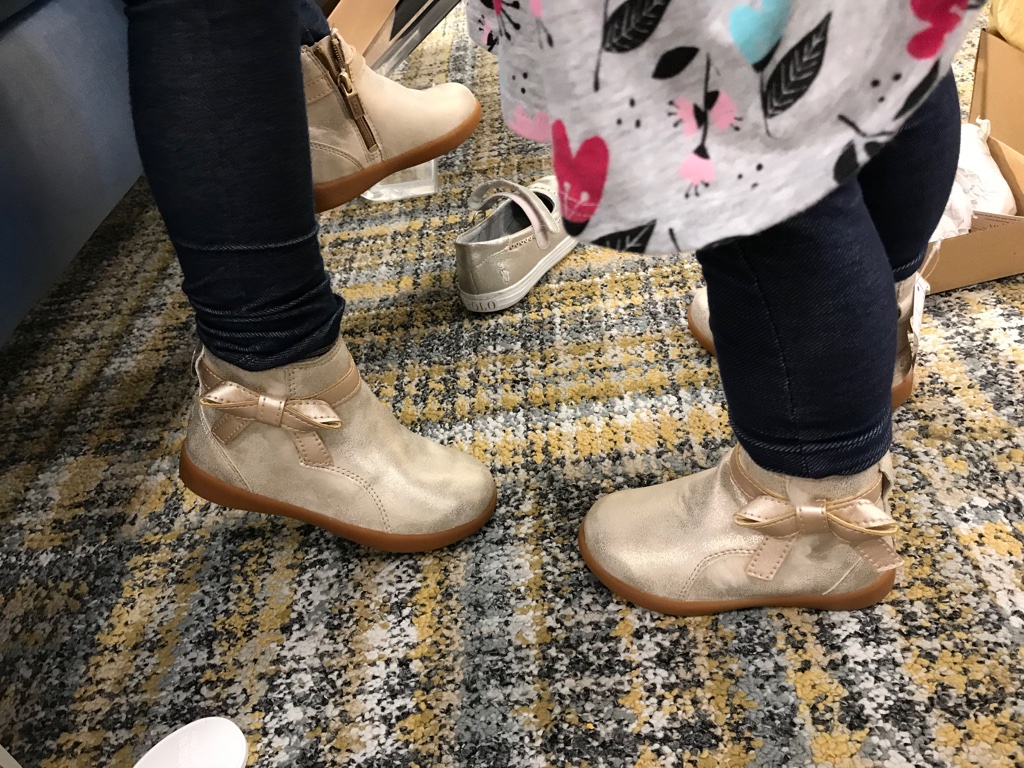 I was a little surprised to see that they were already setting up Santa’s sleigh! I’m a big believer in celebrating Christmas for most of the month of November . . . but you should at least wait until after Halloween to decorate! 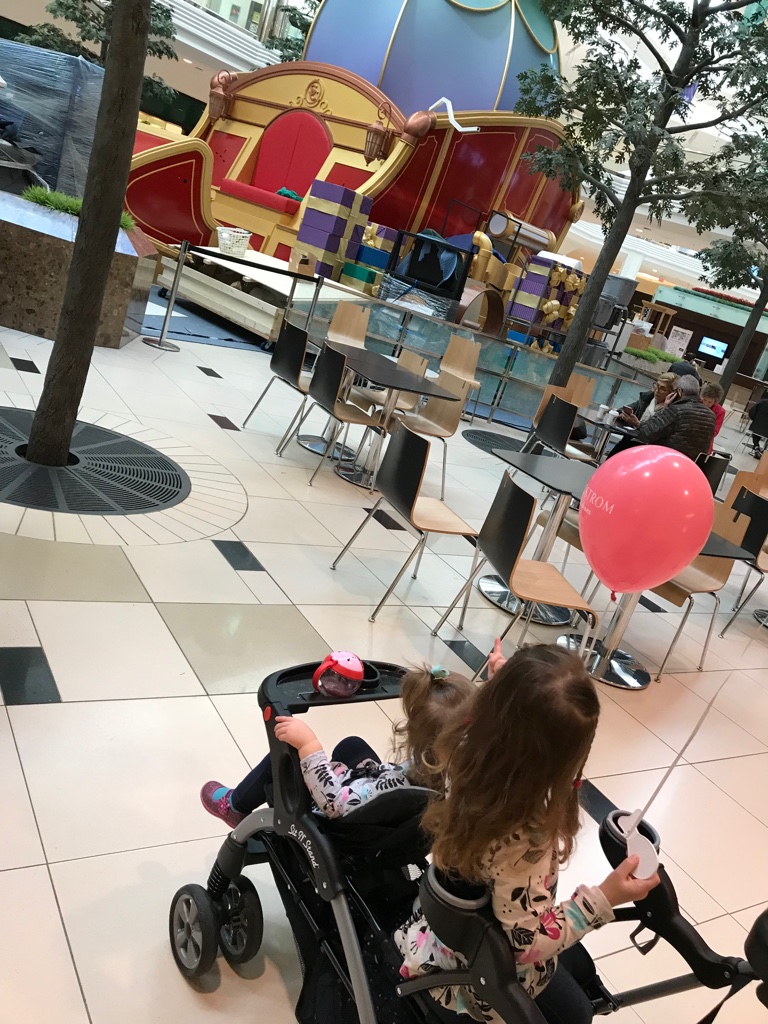 Emmy didn’t want to share the fish, so she pulled on Lucy’s shirt until she got down. 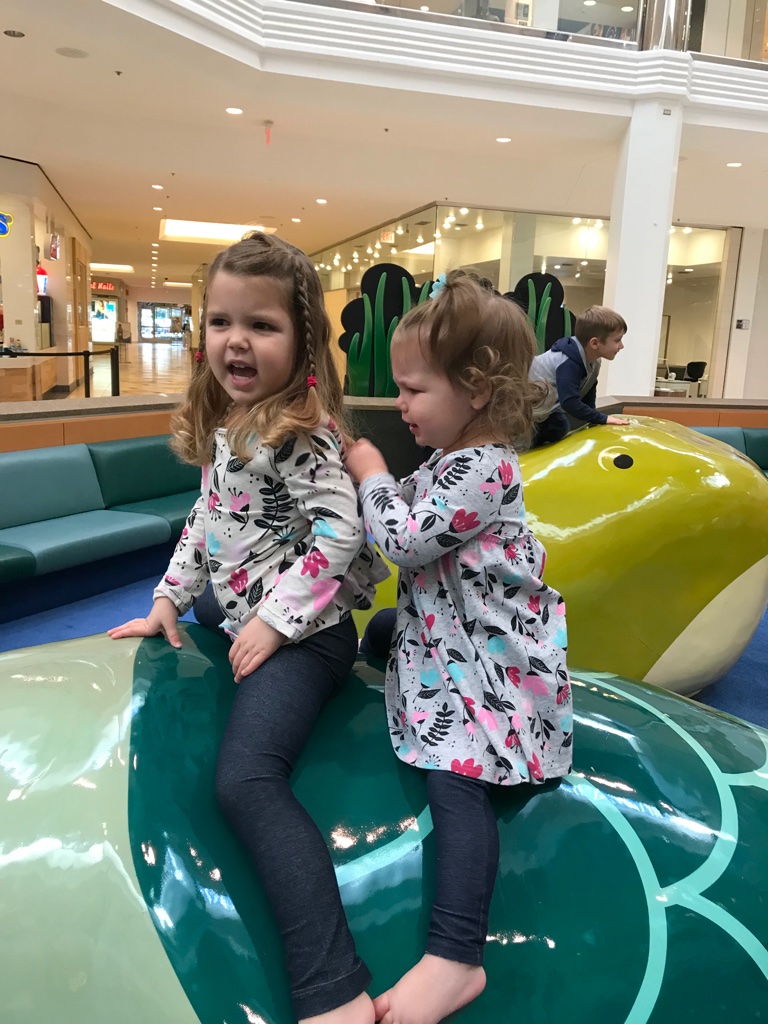 What a little stinker! 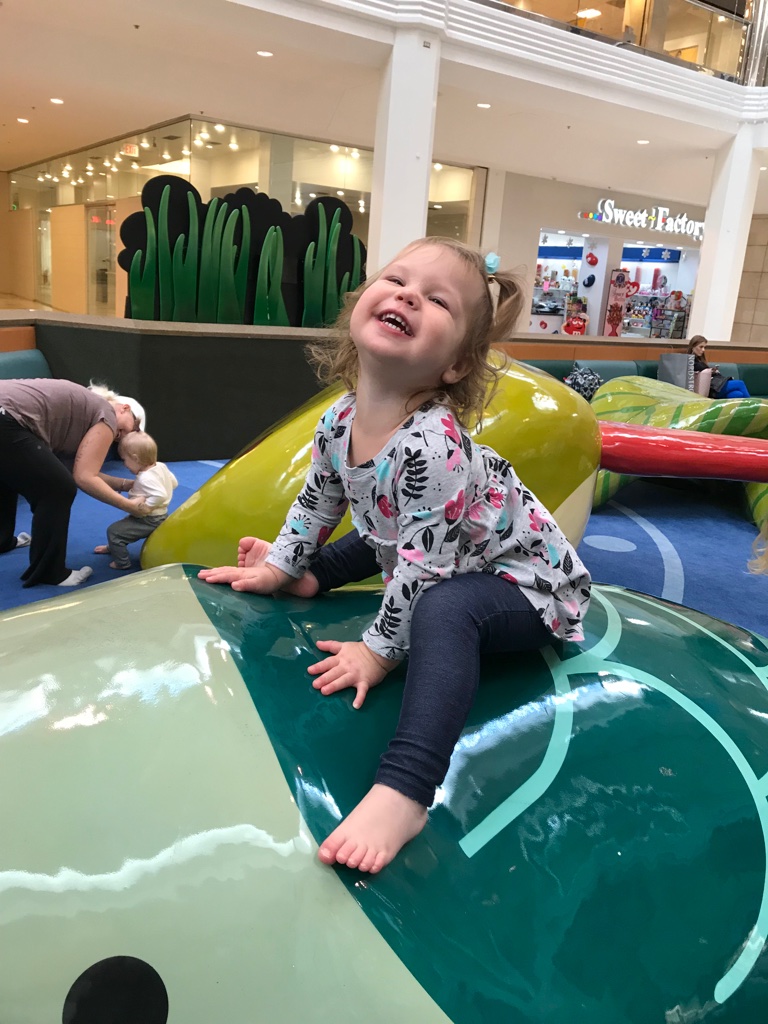 Look at Lucy’s face! I’m convinced she was two seconds away from pushing Ems off the balance beam. 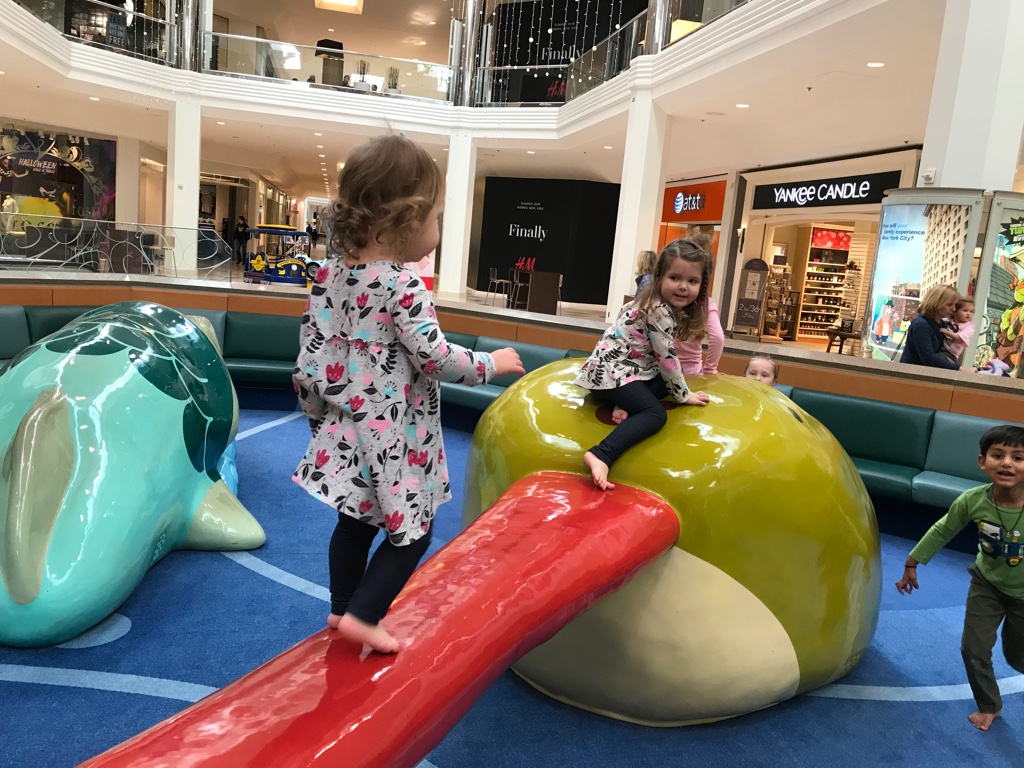 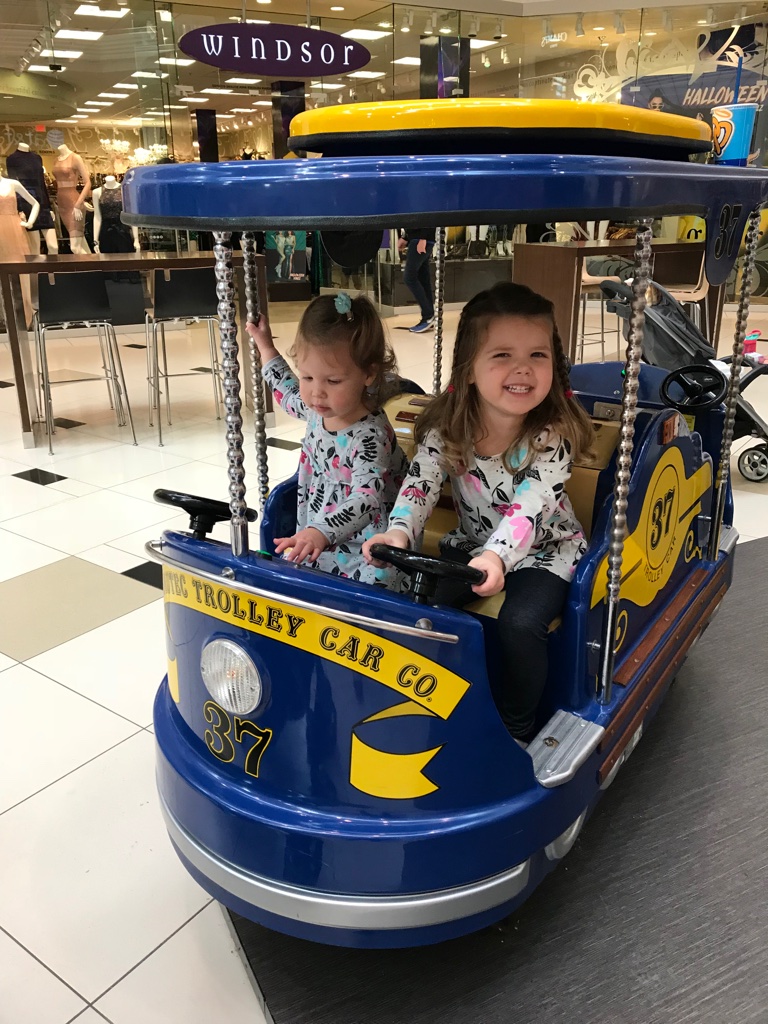 Did anyone else get the Target toy catalog in the mail yesterday? We happened to get two copies, and they made dinner prep a breeze for me! Thanks, Target! 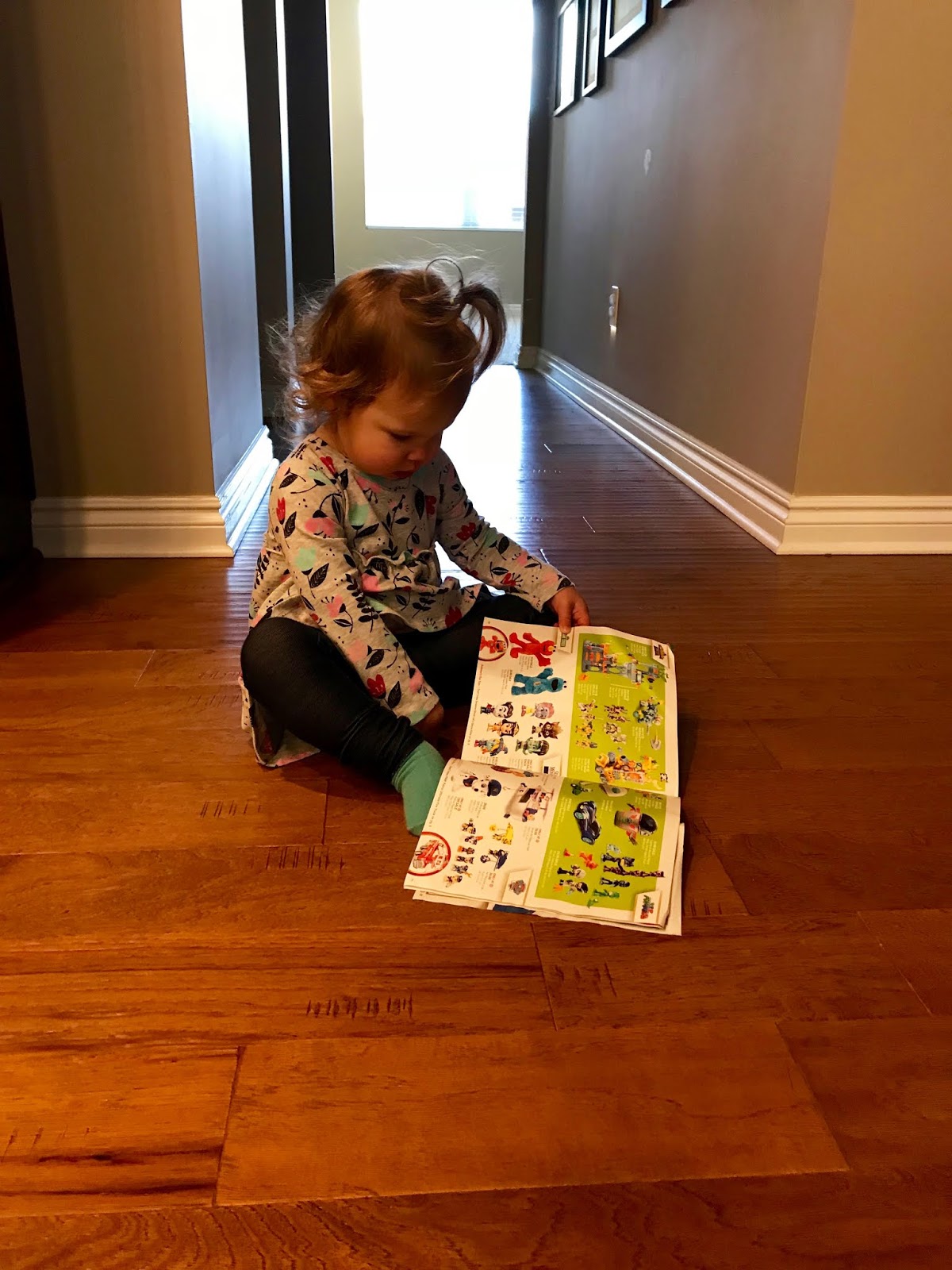 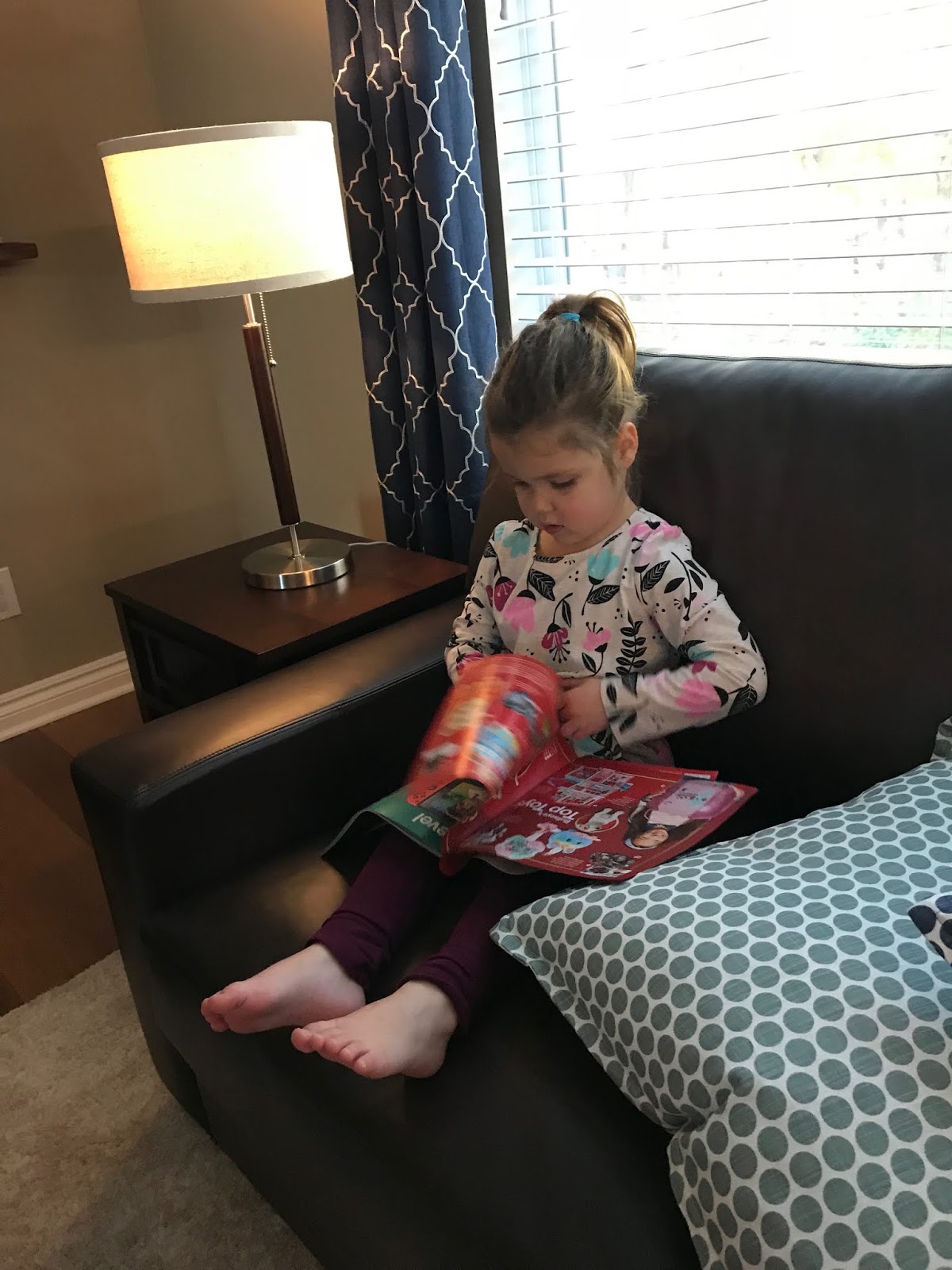 As of now, it looks like the girls will be having a sleepover at their grandparents’ houses on Friday night. It’s a necessity for my sanity, and I’m very much looking forward to turning my brain off for twenty-four hours!
Have a great weekend!
XOXO