Happy Friday!!
I’m feeling a bit more well rested today, so here’s what we’ve been up to this week.
I topsy tailed Lucy’s hair this week! She ended up not loving it, but I was pretty excited about it. Oh, and you totally don’t need that As Seen on TV tool from the 90’s . . . you can do it all with your fingers! 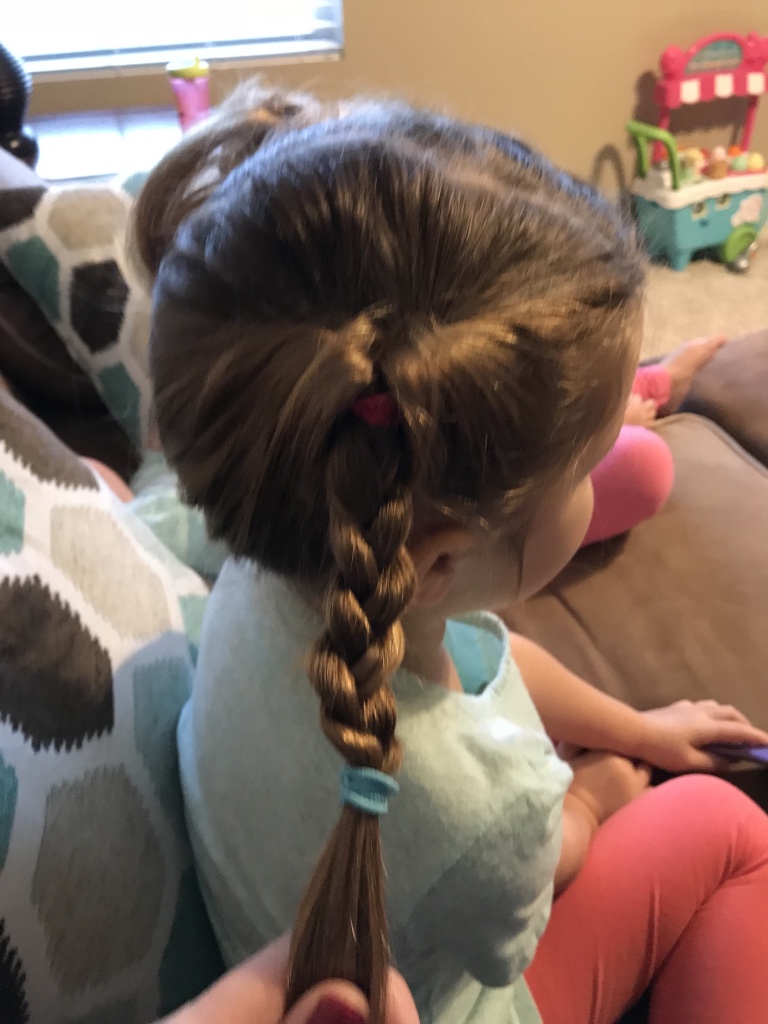 I don’t remember what Emmy found so funny while I was changing her diaper, but I sure do like seeing those beautiful teeth! 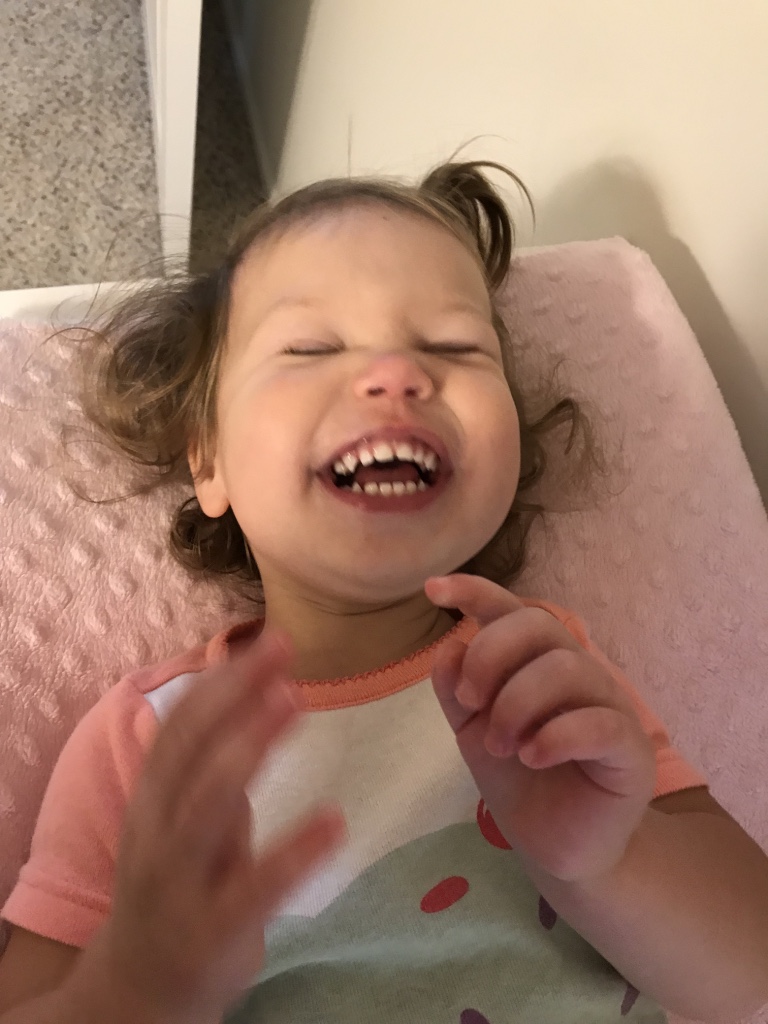 I was getting lunch ready and asked Lulu to get out her placemat and take it to the table. She ignored me, but Emmy got out a placemat and started setting up all of her little people on it. She is at the cutest age right now! (Minus the clinginess and tantrums) 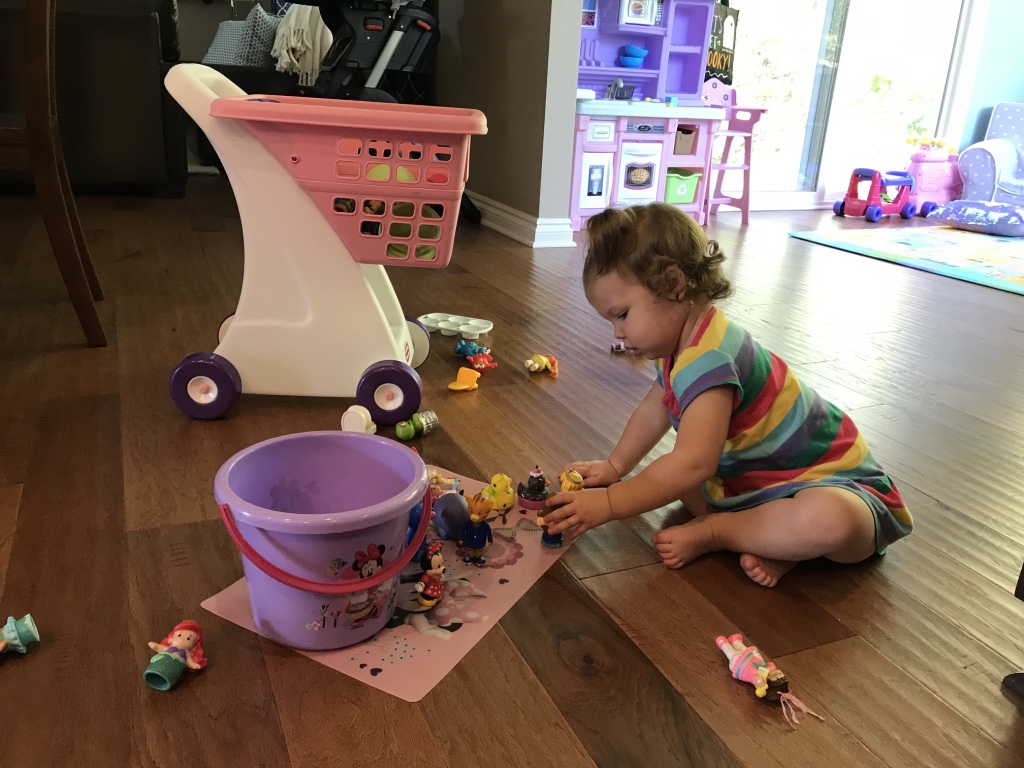 I let the girls go free range for a bit at Meijer. Lucy did a great job making sure Emmy stayed right by her. 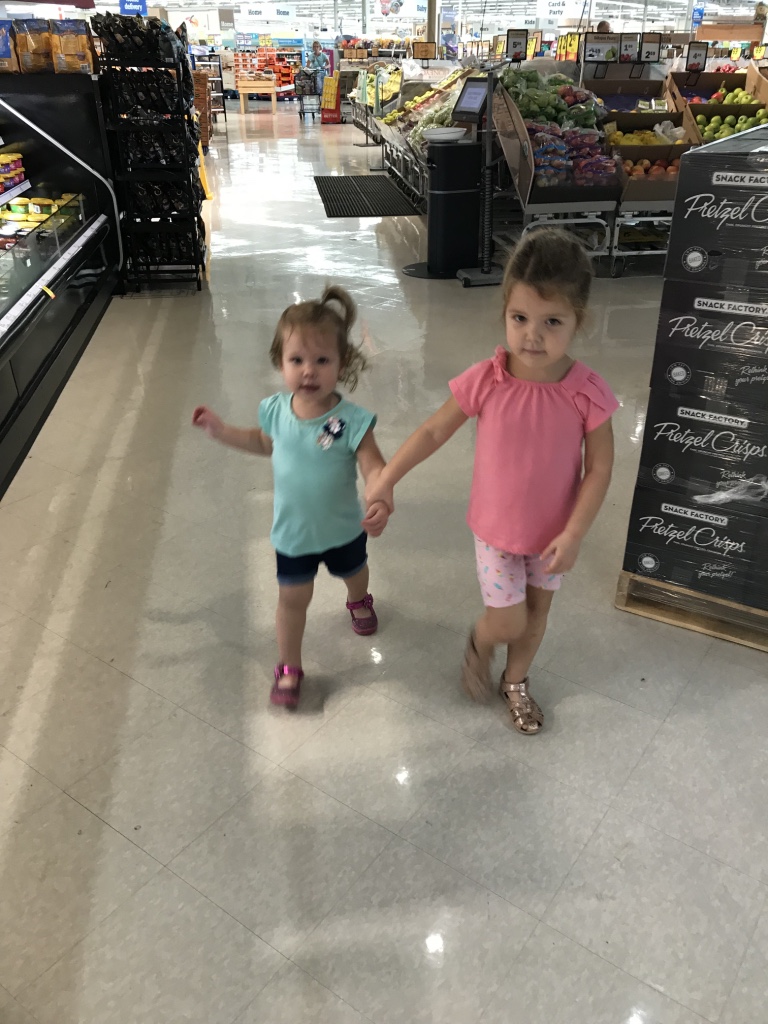 How sweet is this? Lucy couldn’t sit down for lunch until she had Minnie situated in the high chair next to her. Every few minutes she’d turn around to feed Minnie a bite of Cheerios! 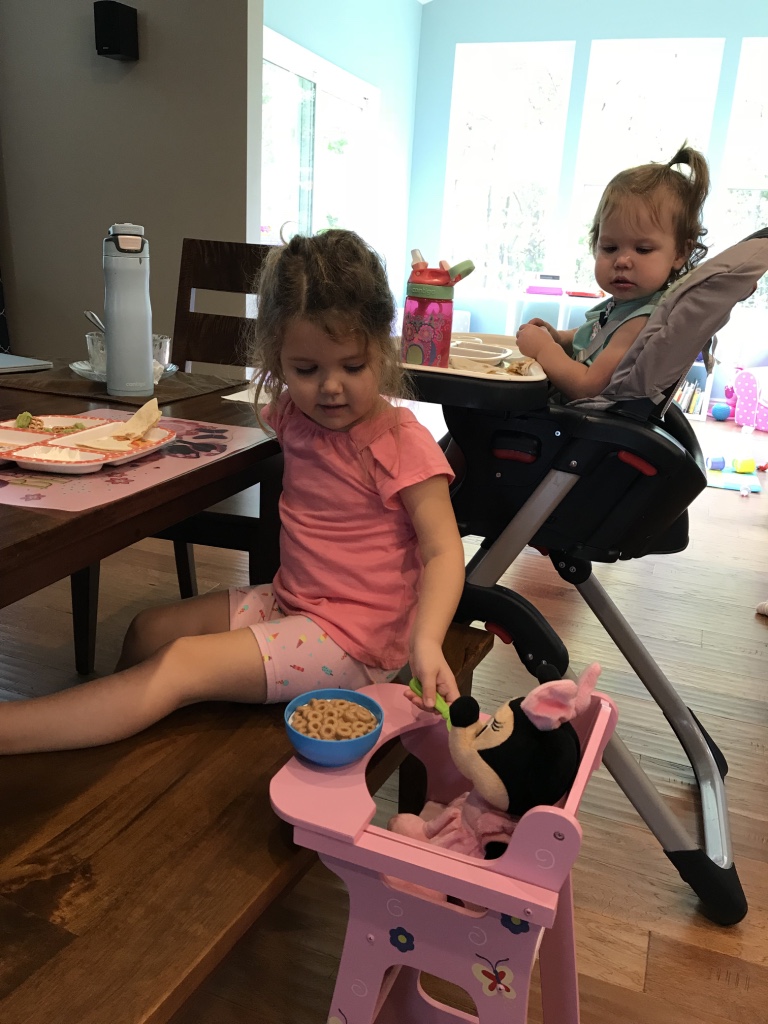 Matty had been waiting on this hat to arrive for awhile, so I decided to open it up when it arrived and send him a picture at work. It’s a Milorganite hat . . . which is a type of lawn fertilizer. I forgot to snap a pic, but he wore it proudly while he cut the grass last night! 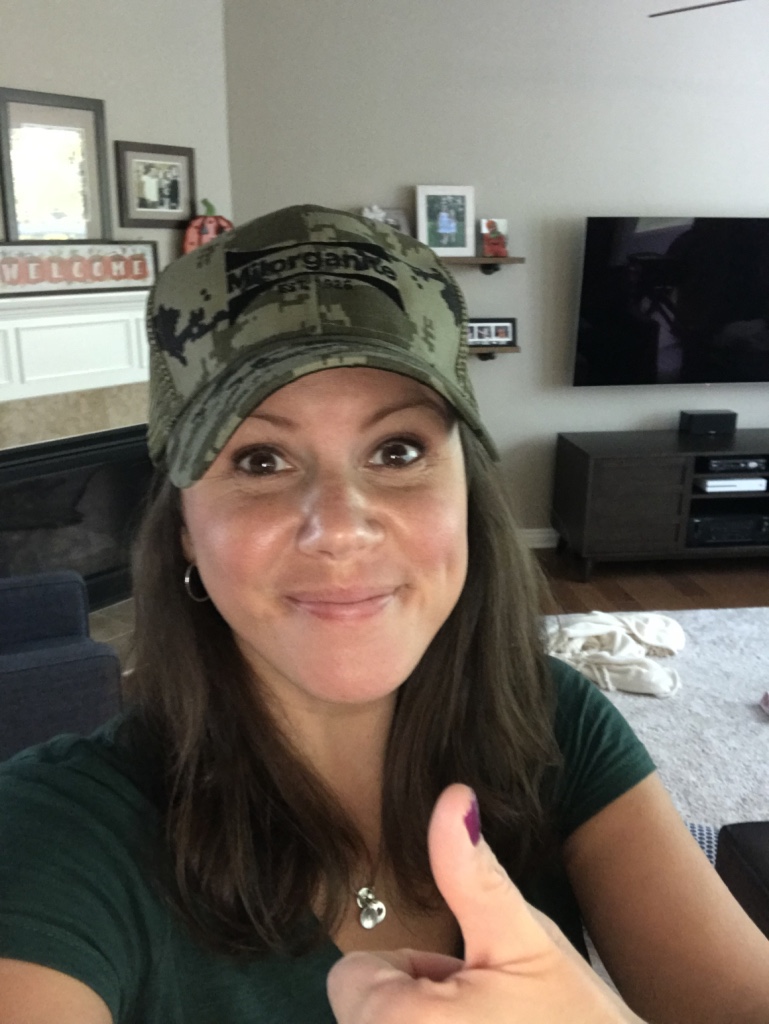 I ordered the girls some bows from Amazon to wear for family pictures this weekend. The size description was obviously inaccurate! These definitely went into our return pile. 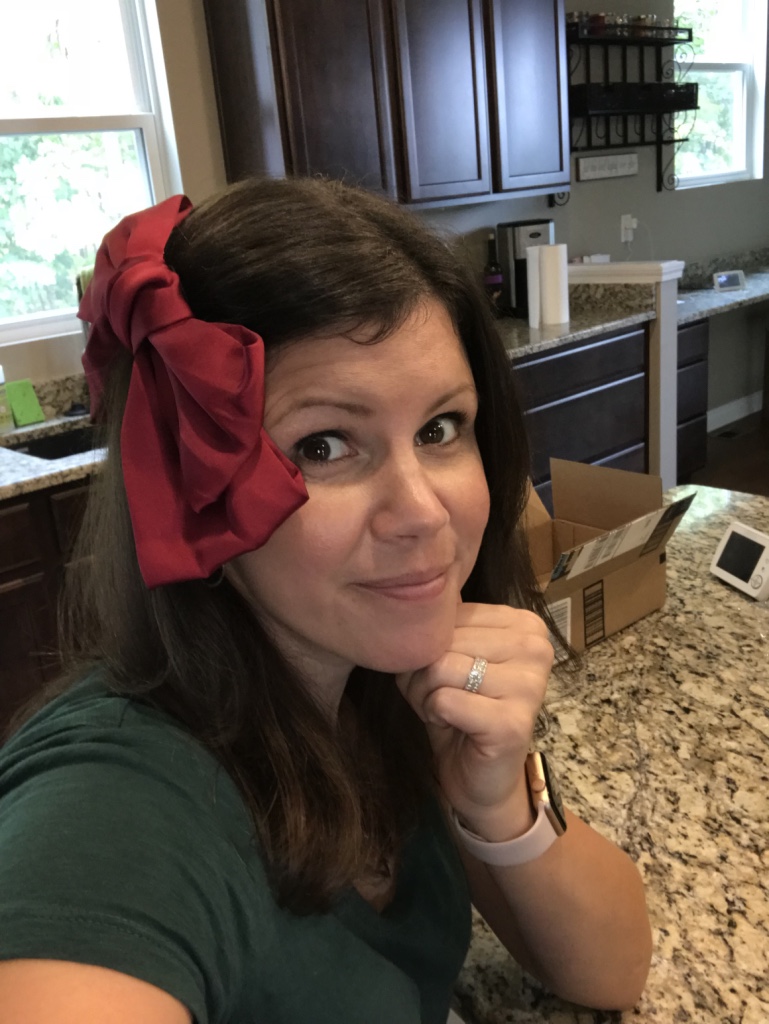 Lucy always gets to watch half of a Daniel Tiger episode before bed. Up until about a month ago, it used to be something to entertain her while we bathed Ems and put her to bed. Emmy has grown to love DT, though, so we’ve amended our nightly routine a bit. Both girls get a bath together and then we all sit in the loft to watch Daniel Tiger together. It’s my favorite part of the day because it usually involves lots of snuggling! 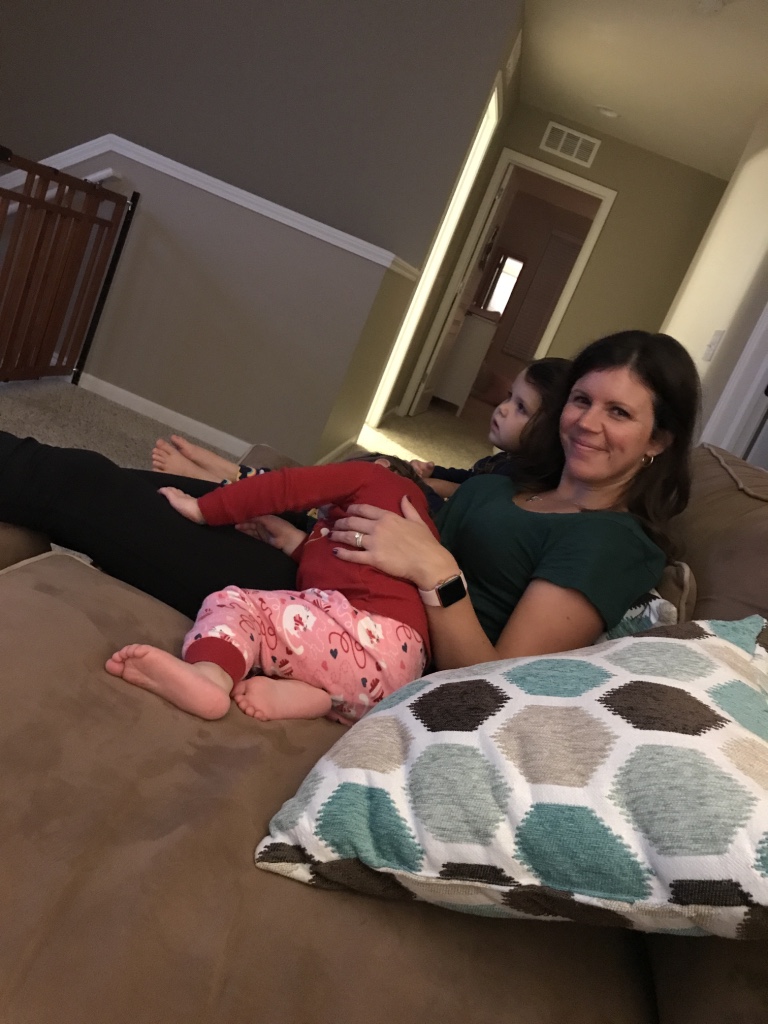 This popped up on Matty’s Instagram the other day. Doesn’t it look just like Snort?! Had I known Yeti made dog bowls when the dingos were alive, I probably would have bought them one. I’d like to think they’re both enjoying ice cold water out of a bowl like this in Doggie Heaven. 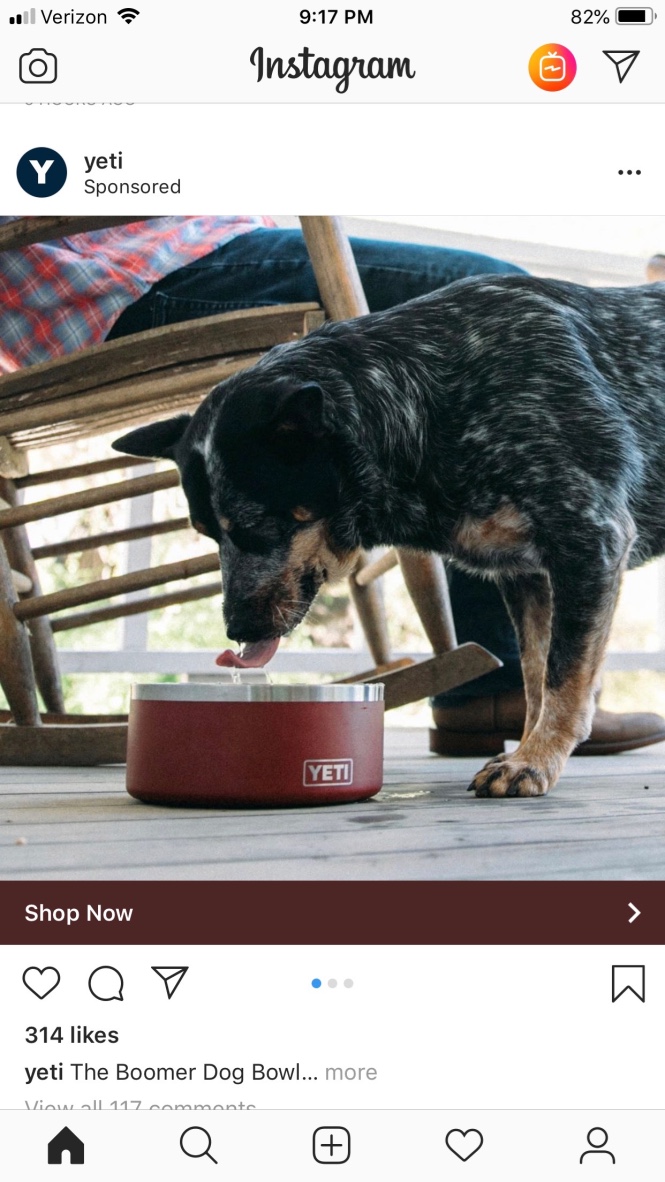 Yesterday was picture day for Lucy, and she owned it! We got the proofs the same day, which totally made my day! As soon as we get the actual high quality photos I’ll be sure to share. 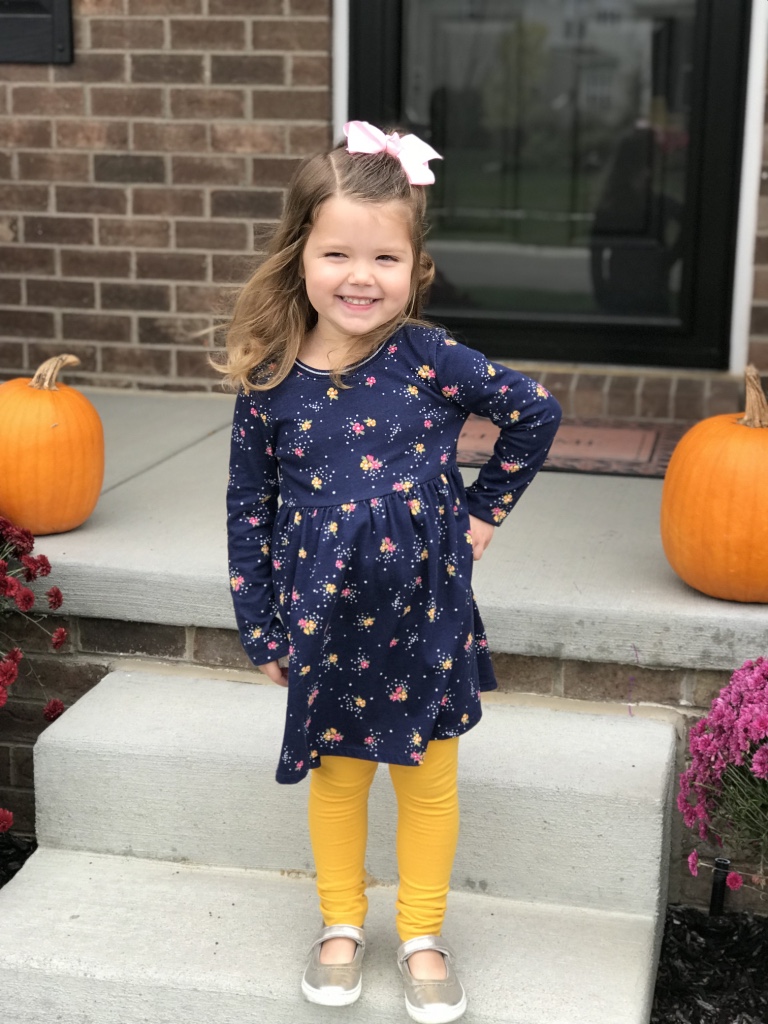 Lucy brought home a bunch of Scholastic book orders from school and wanted to look at them right away. She’s definitely my daughter! Emmy wanted to get in on the action too, and it was the cutest thing ever. Lucy would turn the page and then they’d each point to a book they wanted. Then Lucy would turn to the next page, and they’d repeat the process. Emmy saw a book about a bear and kept pointing to it and yelling, “Bear! Book!” I really wanted to get a picture from the front, but I also had to be sure that no one fell off the bar stools. #priorities 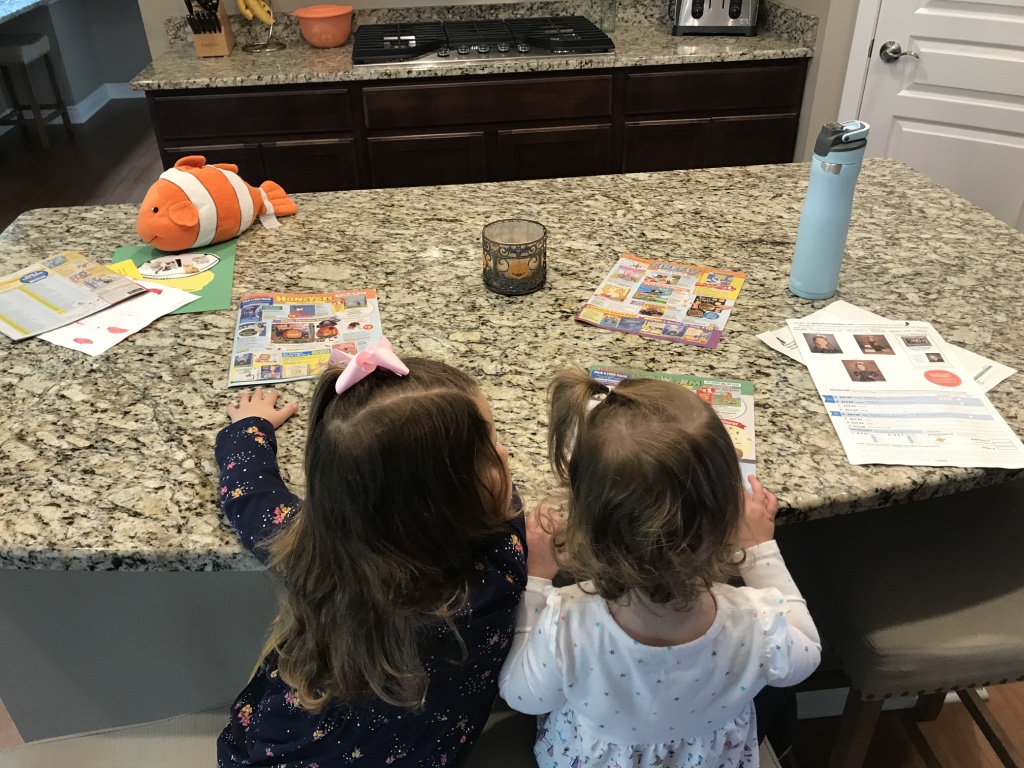 The past few weeks I’ve noticed that Lucy is super duper tired when she comes home from school. Not tired enough to nap, but definitely tired enough to chill out on the couch for awhile and watch Super Monsters. Has anyone else watched that show on Netflix? It’s about cute little monsters who go to preschool, and it’s perfect for this time of year. Lucy loves it! 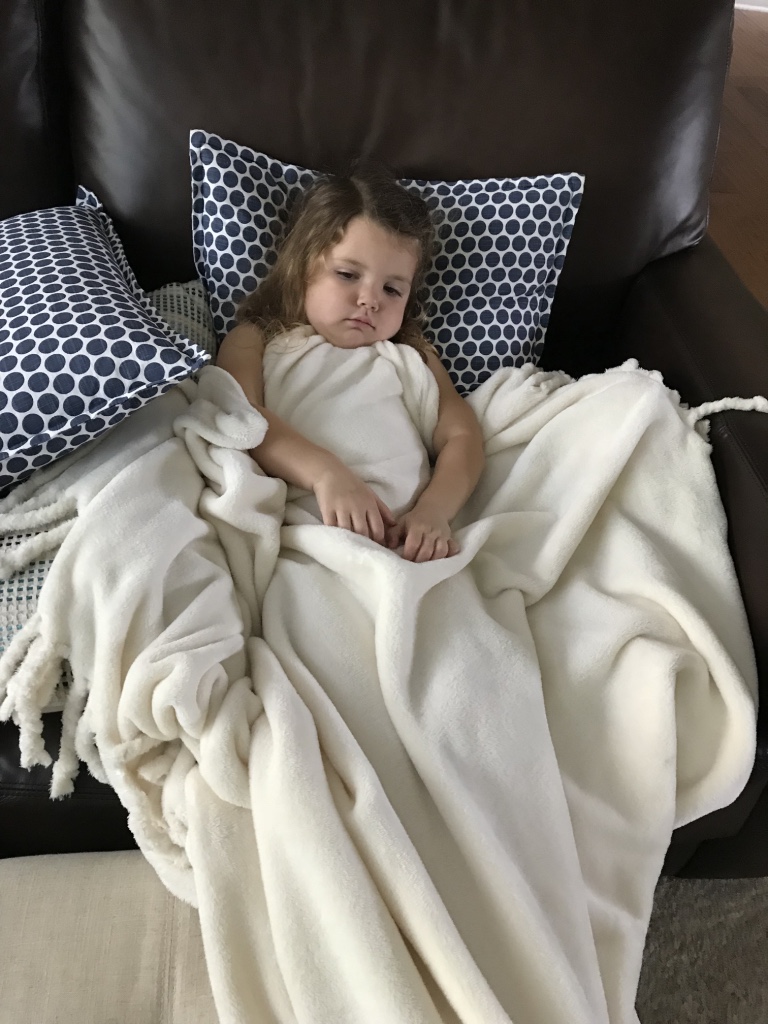 And speaking of not napping . . . Emmy Roses is going through some sort of regression this week. If she naps at all, it’s usually only 45 minutes to an hour. That’s a far cry from the 2-2.5 hour naps I was used to! Look at that poor girl . . . just go back to sleep! #nope 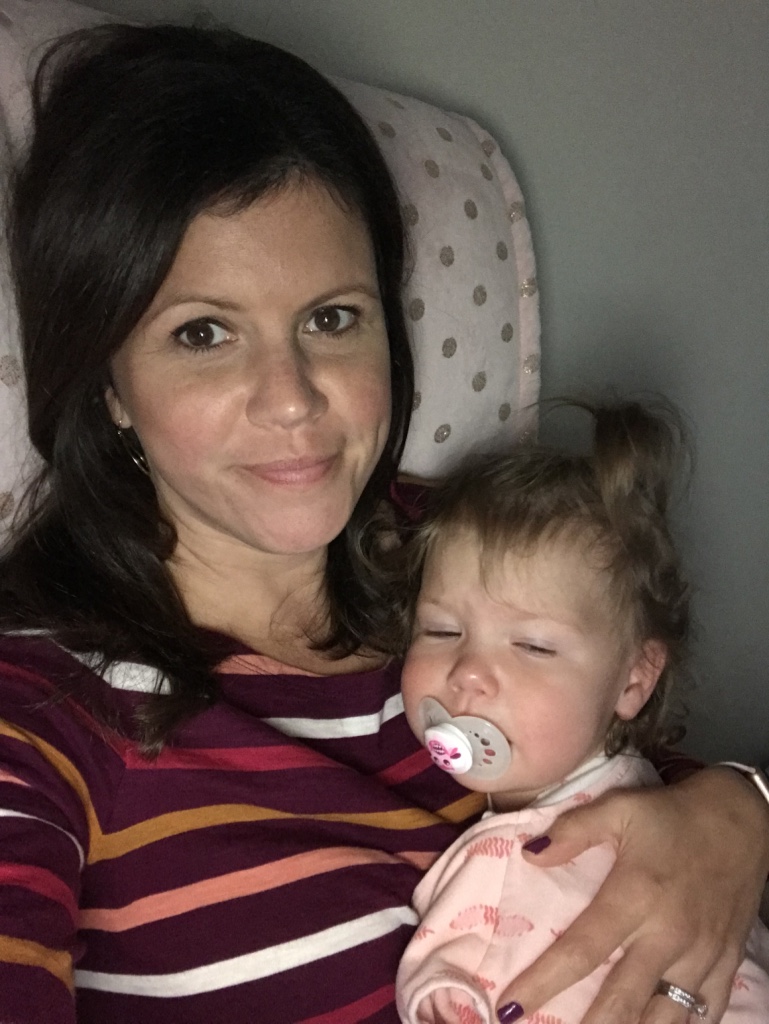 Emmy’s nap regression means the afternoons have been looooong. Yesterday we took advantage of the cool weather to spend some time at the playground. 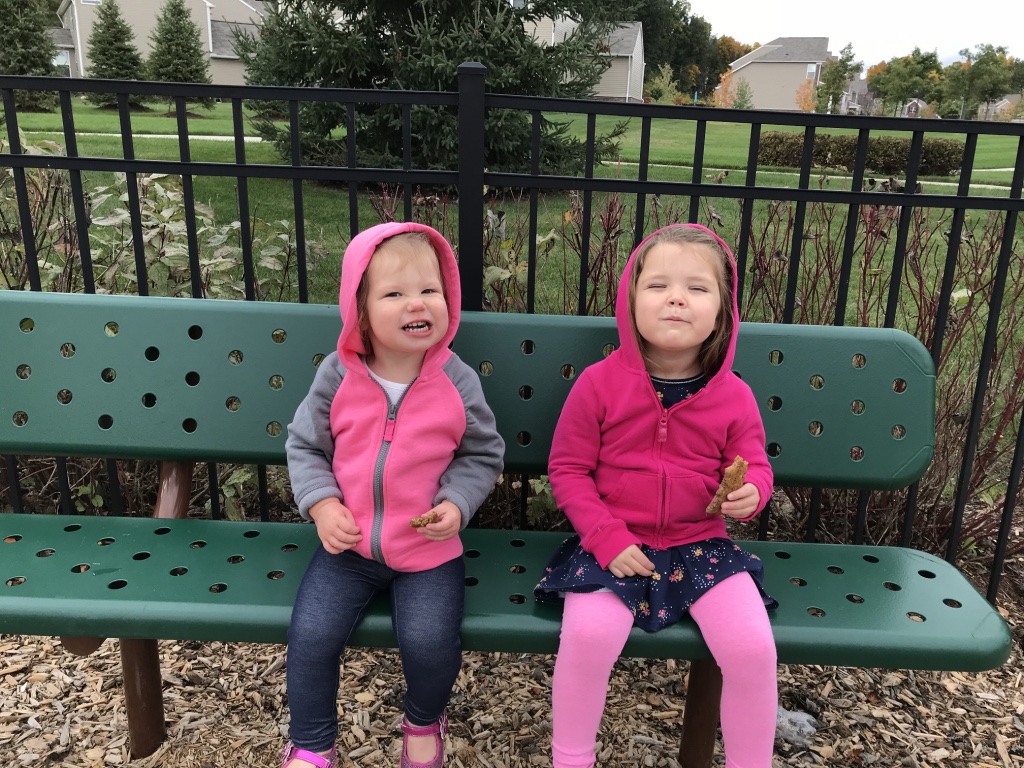 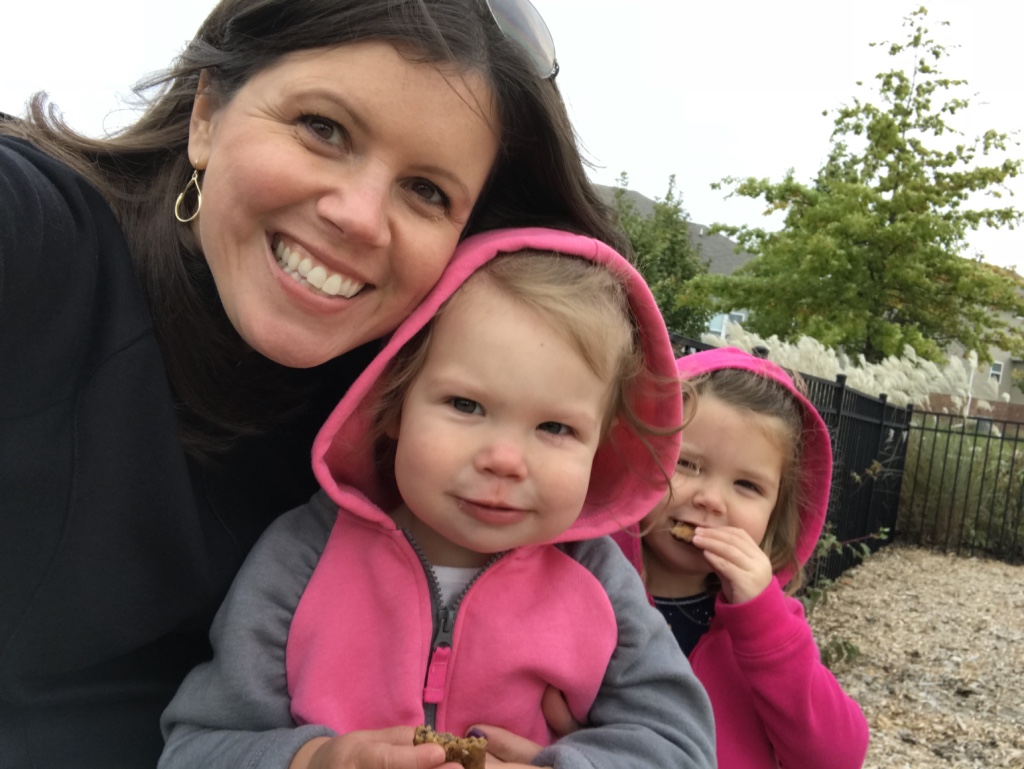 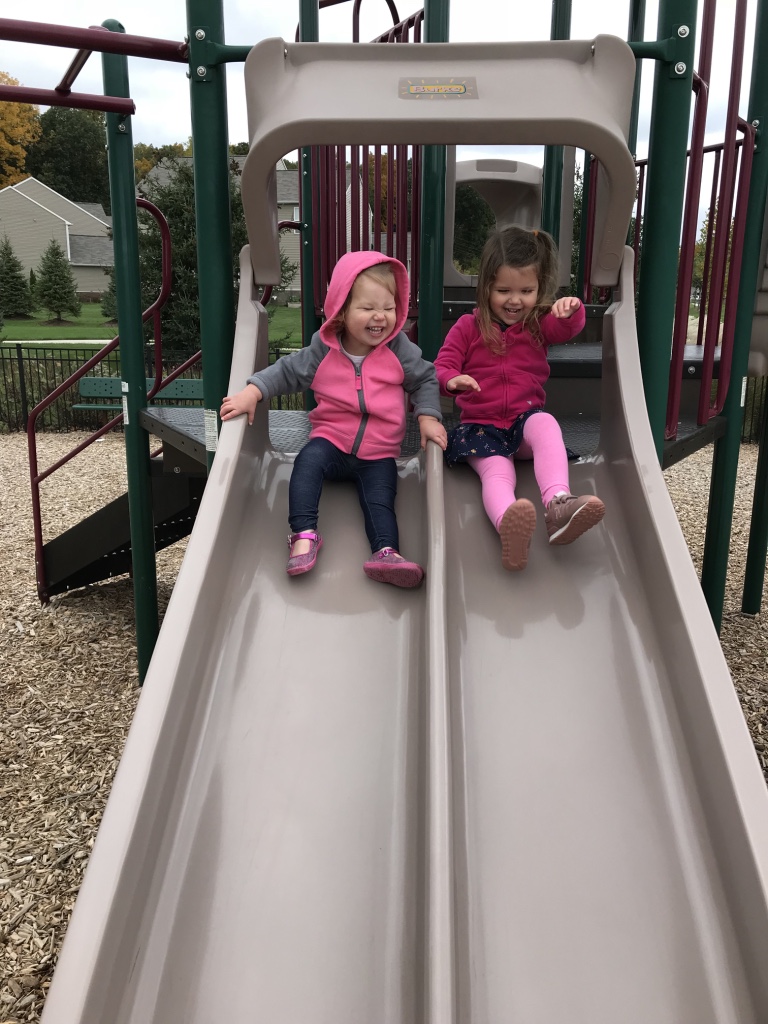 Even though they had a snack at the park, apparently they needed another one after 45 minutes of playing outside. These silly girls decided to eat their goldfish underneath the table. 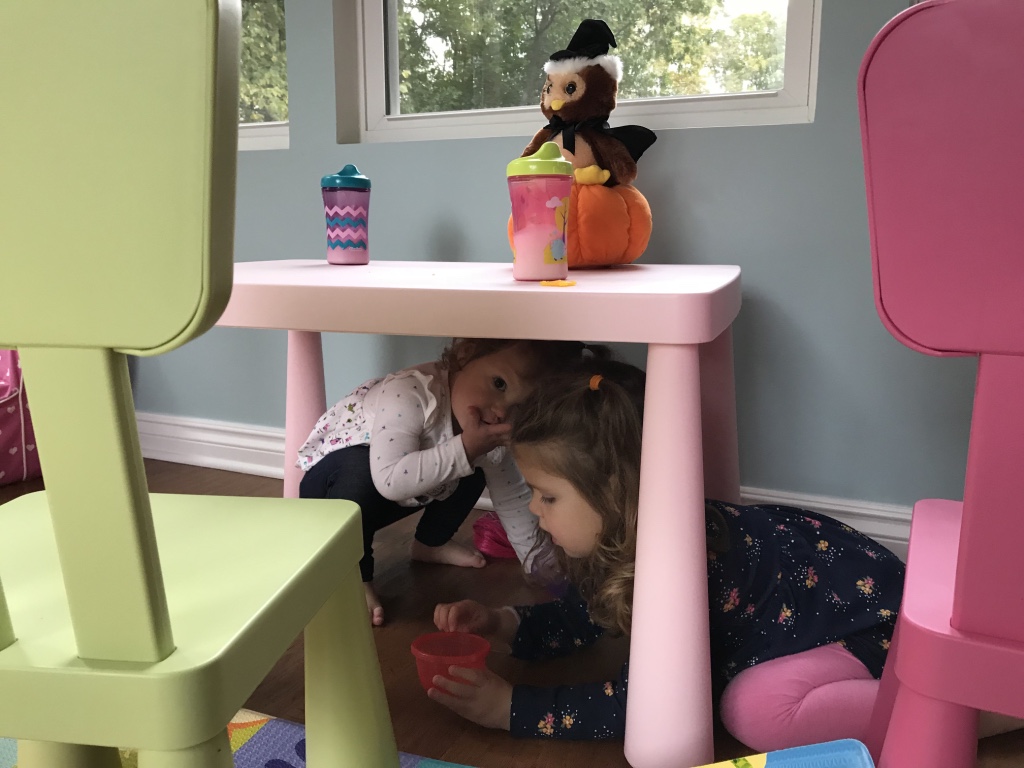 One girl and one puppy watching Bubble Guppies. 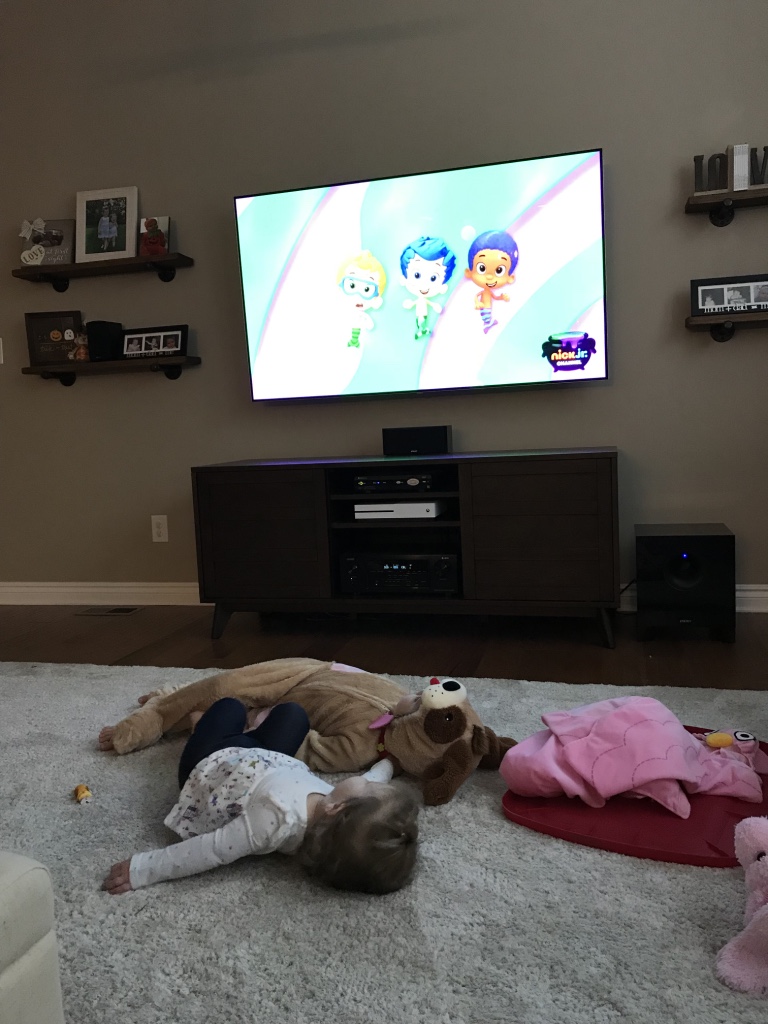 We played outside after dinner last night while Matty cut the grass. Emmy tried to pick up one of the pumpkins on our porch, and the stem broke off. She was super confused! 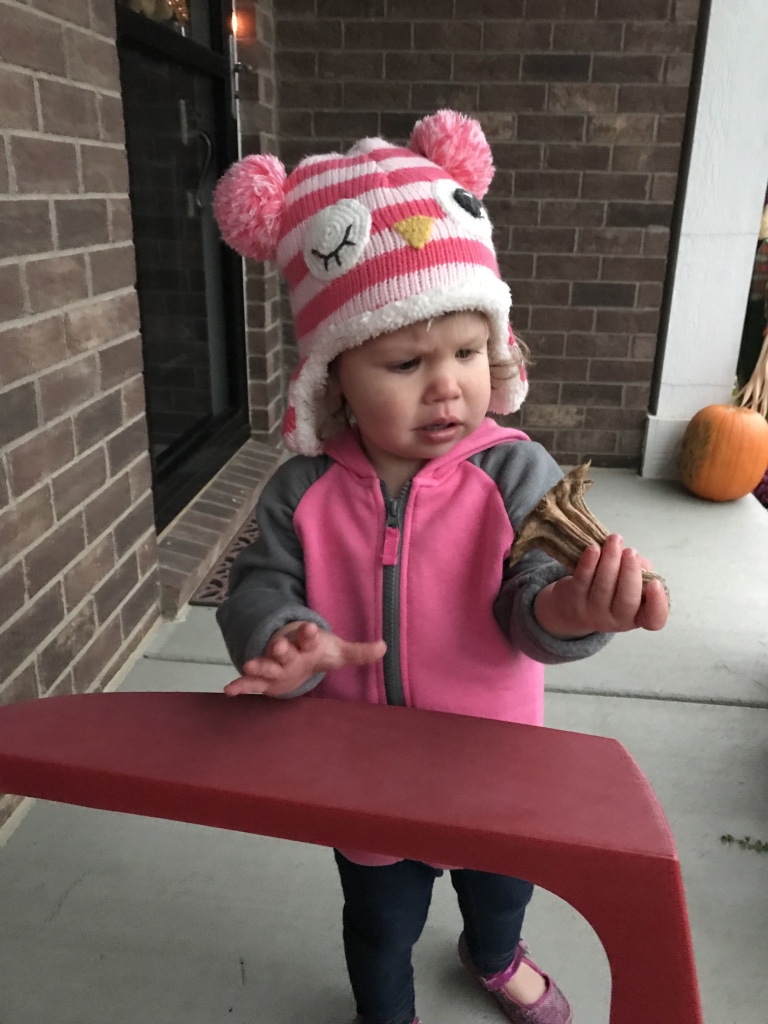 This weekend we are heading to the apple orchard on Saturday, and then we have family pictures on Sunday! I have created approximately 273 different outfit combinations and still don’t love any of them. Oh, and Matty hasn’t even purchased anything yet. So I think we’ll be going to the mall on Saturday in addition to the apple orchard.  😉
Have a great weekend . . . enjoy the fall weather!!
XOXO