I don’t have much to share this morning. Matty has been in Mexico all week for work, so the girls and I have just been chilling at home. Chilling is definitely the wrong word . . . more like melting! Fall temperatures have to come soon, right?! We’ve made it to the playground three evenings in a row, though, so I’m calling that a win.
We went to Target yesterday and had a little fun looking at all of the Halloween costumes. Lucy spotted this flamingo hat and had to try it on. 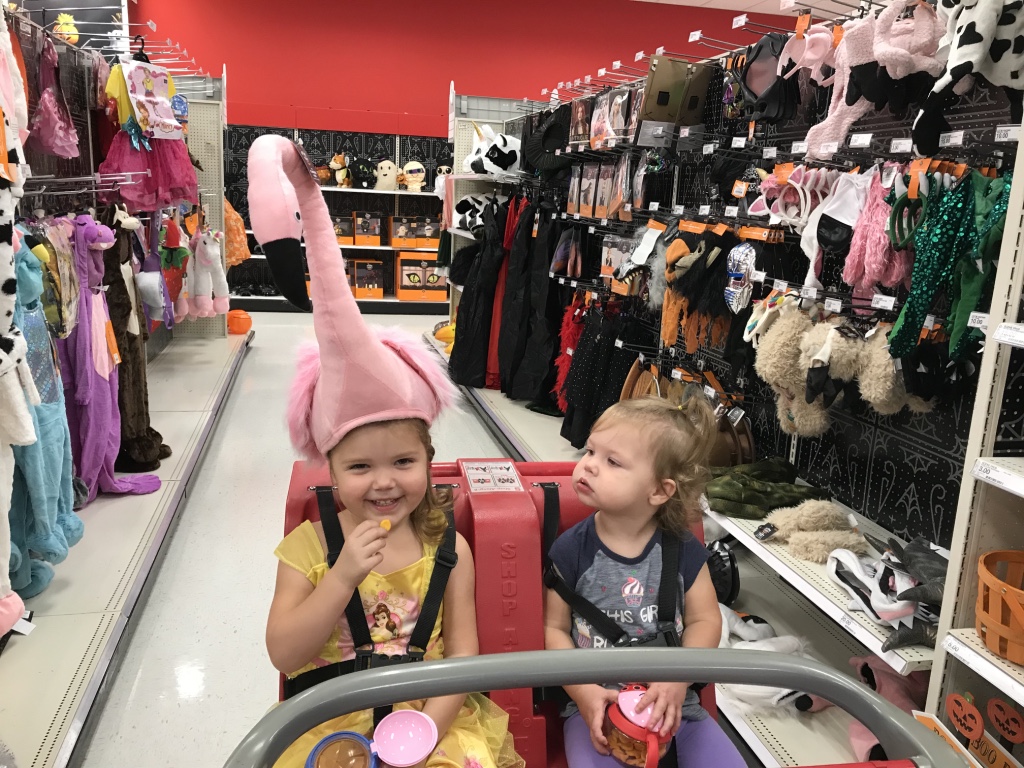 Emmy was intrigued so I put one on her too . . . and then she just looked confused! 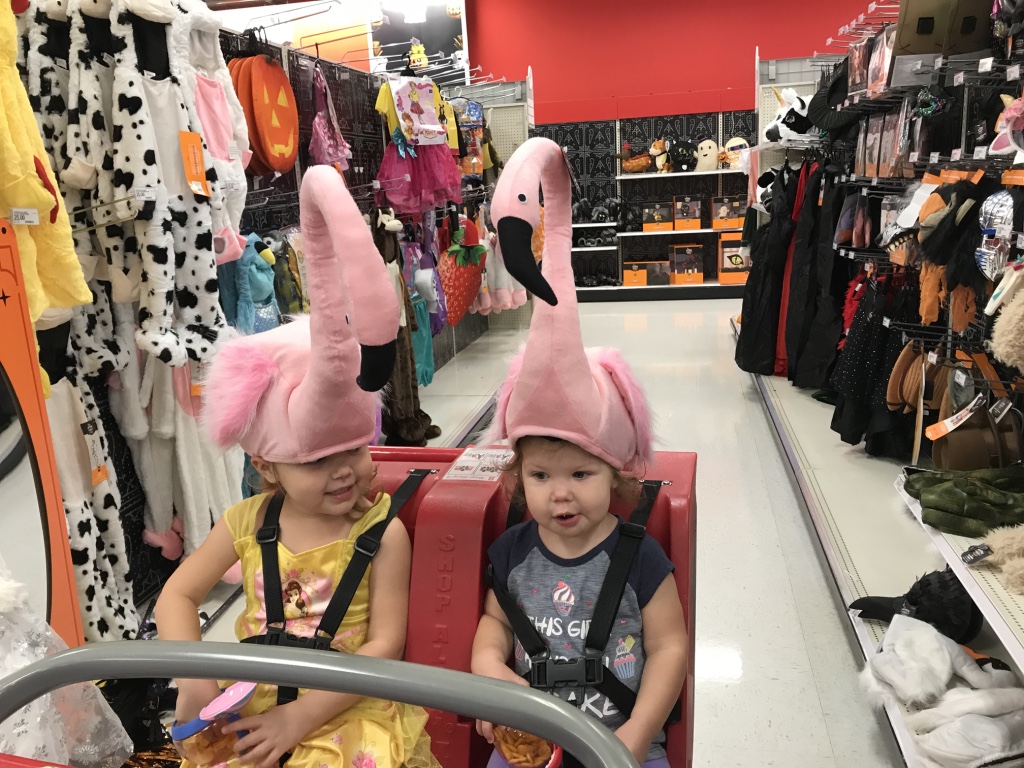 The humidity dropped a little yesterday, so we ate lunch on the porch in the shade. Emmy has developed the annoying habit of throwing all of her food off of her high chair lately, so I thought this might be a nice change . . . and it was. She ate all of her lunch and then tried to grab some of Lucy’s sandwich! 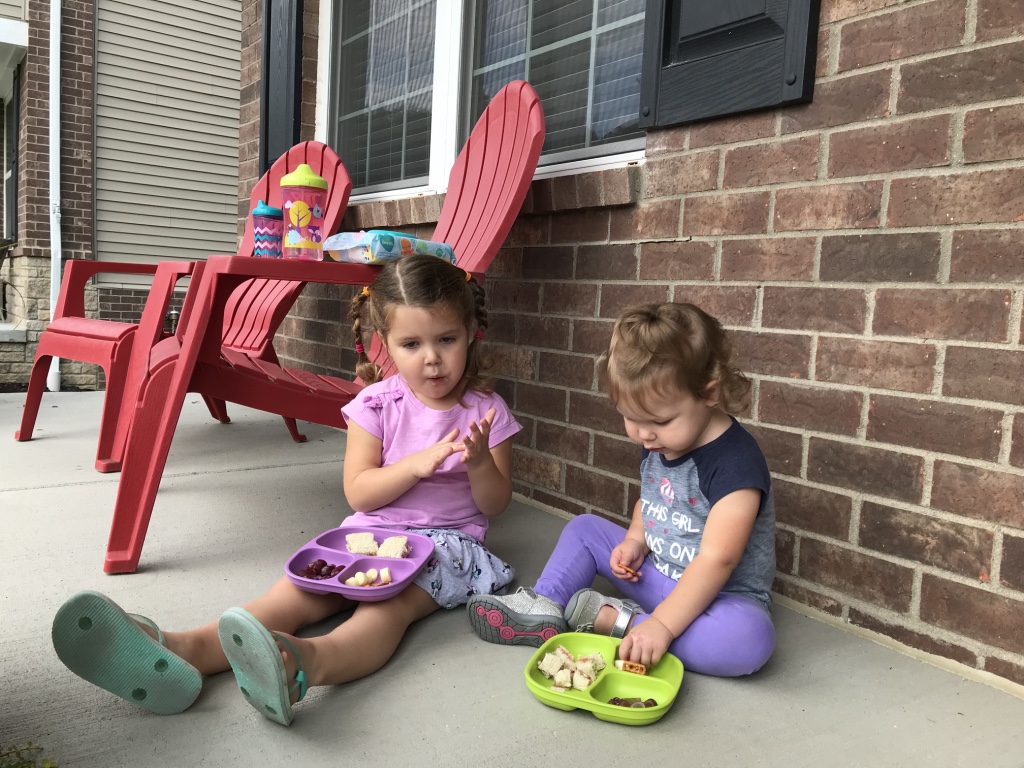 I made a giant sensory pool of corn kernels this week. The girls and neighborhood kids have been loving it, but I had to pull it into the garage to get some shade! 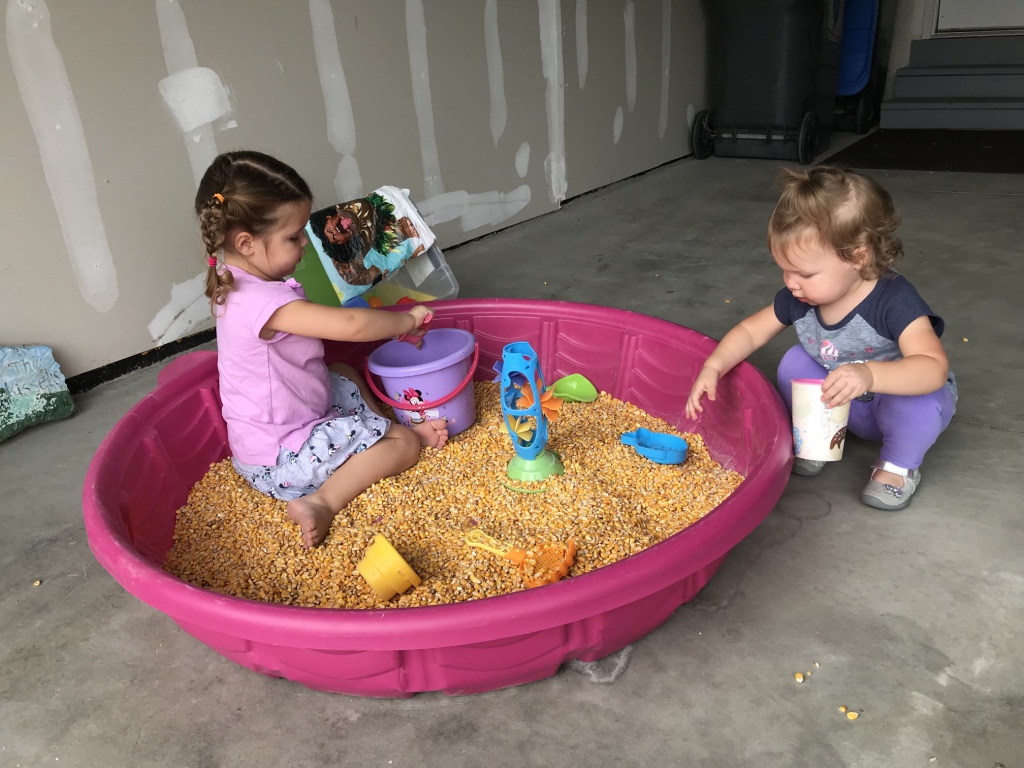 The flamingo hats at Target made me think about getting the girls ready for Halloween. Lucy already has her costume, but I wanted to pull her old ones out to try on Emmy. Lucy didn’t believe me that they’d be too small for her, so she tried them on to get proof. Exhibit A: 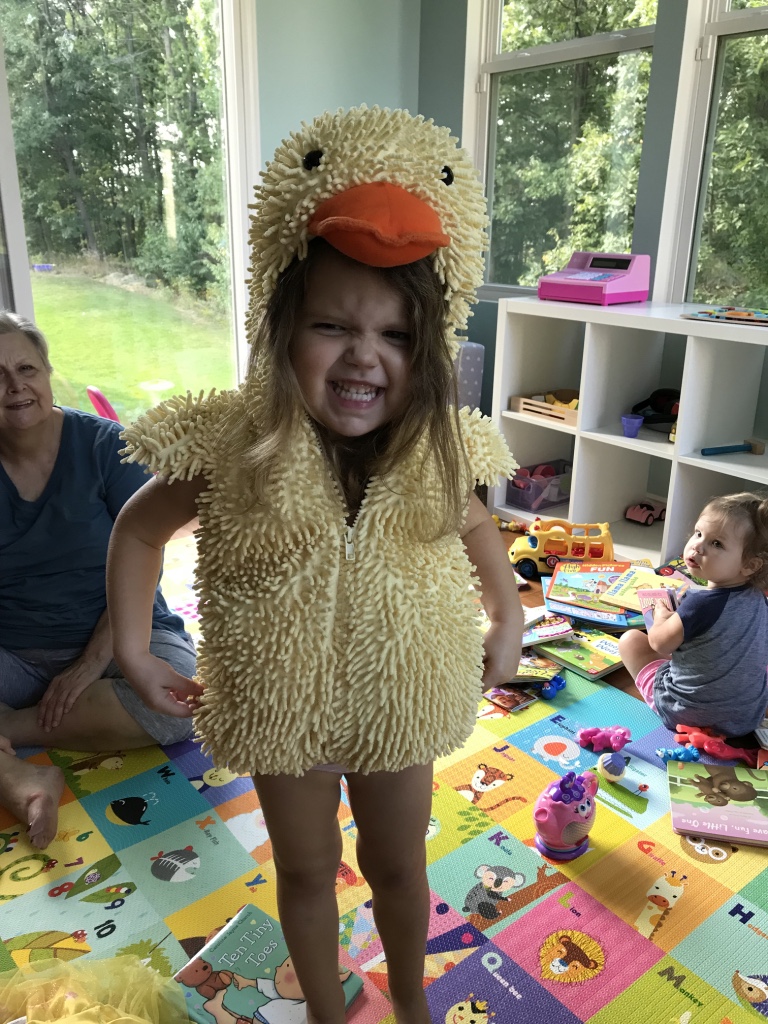 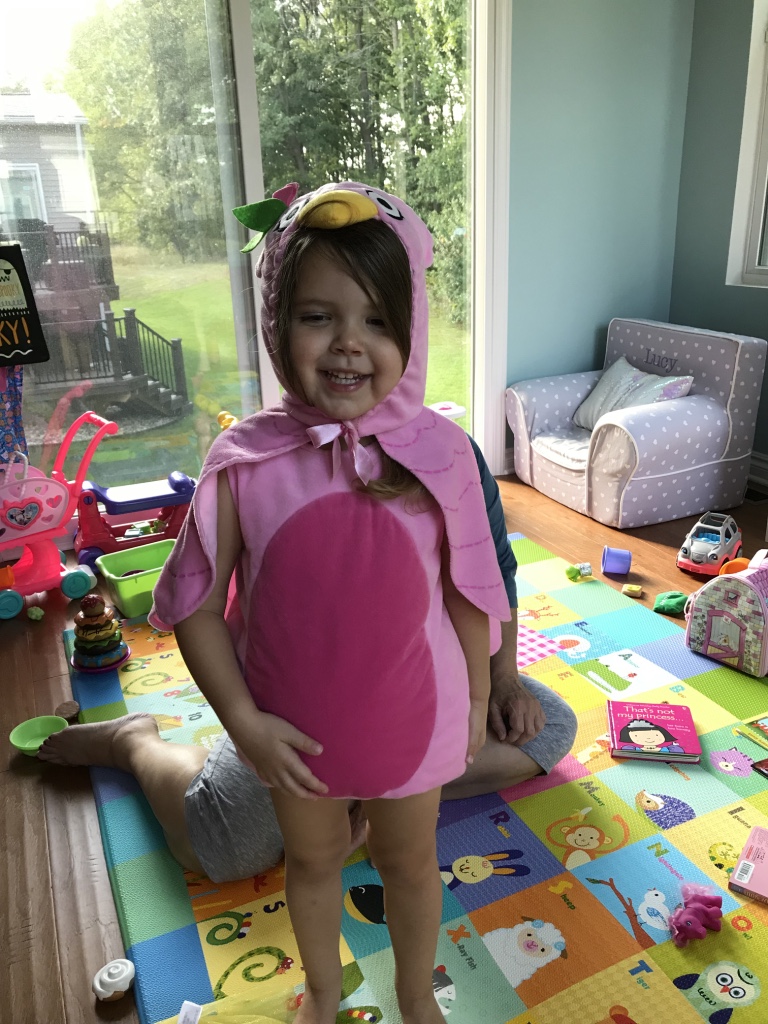 Emmy wasn’t super interested, but I did get the owl hat on her for about four seconds. 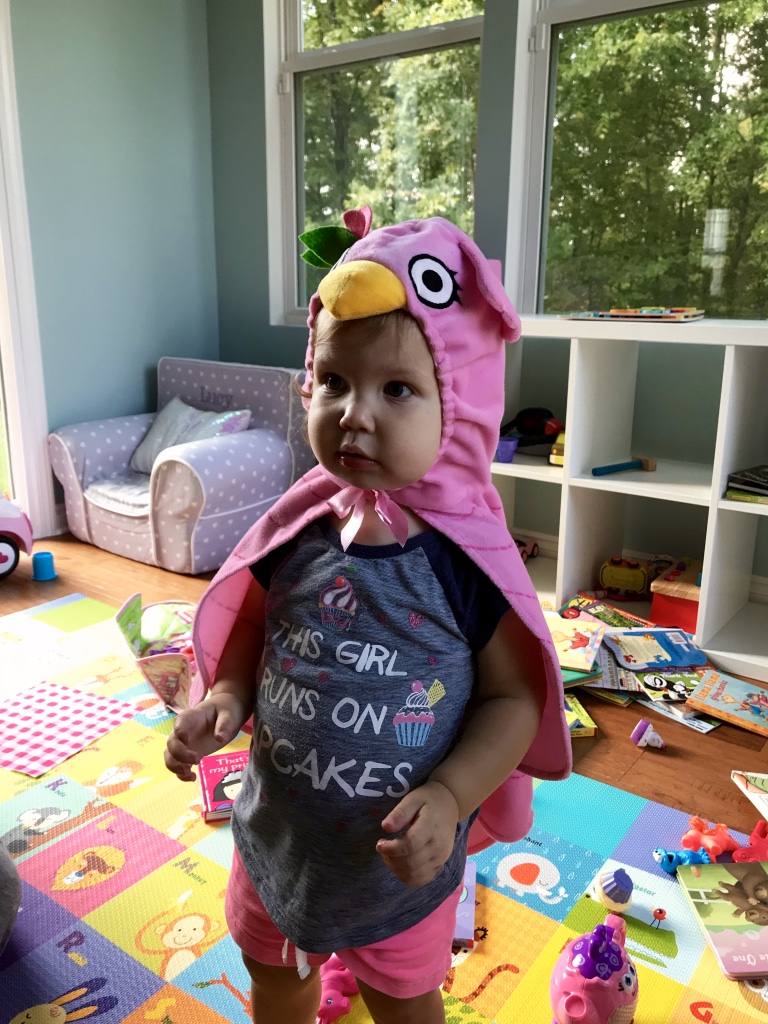 She eventually asked to put the duck costume on, but then freaked out when she saw herself in it! LOL 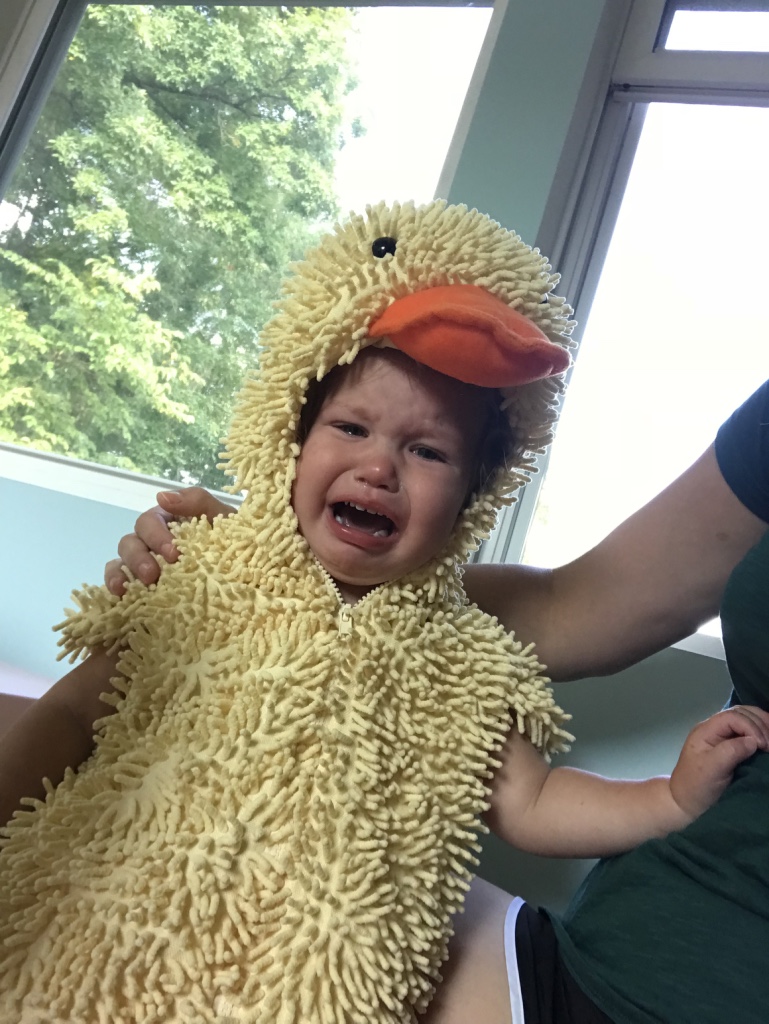 Then Lucy put on her puppy dog costume from last year, and Ems LOVED it! She kept “arf-ing” and petting Lucy. It was so cute! 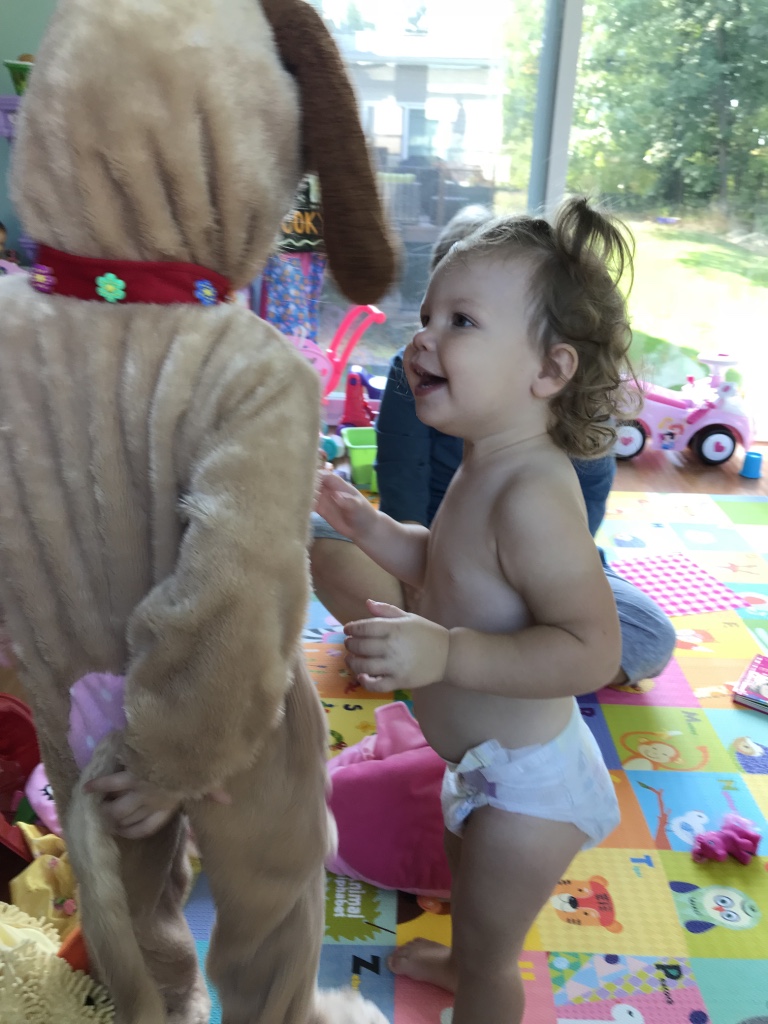 Who wouldn’t want to hug a super soft puppy dog?? 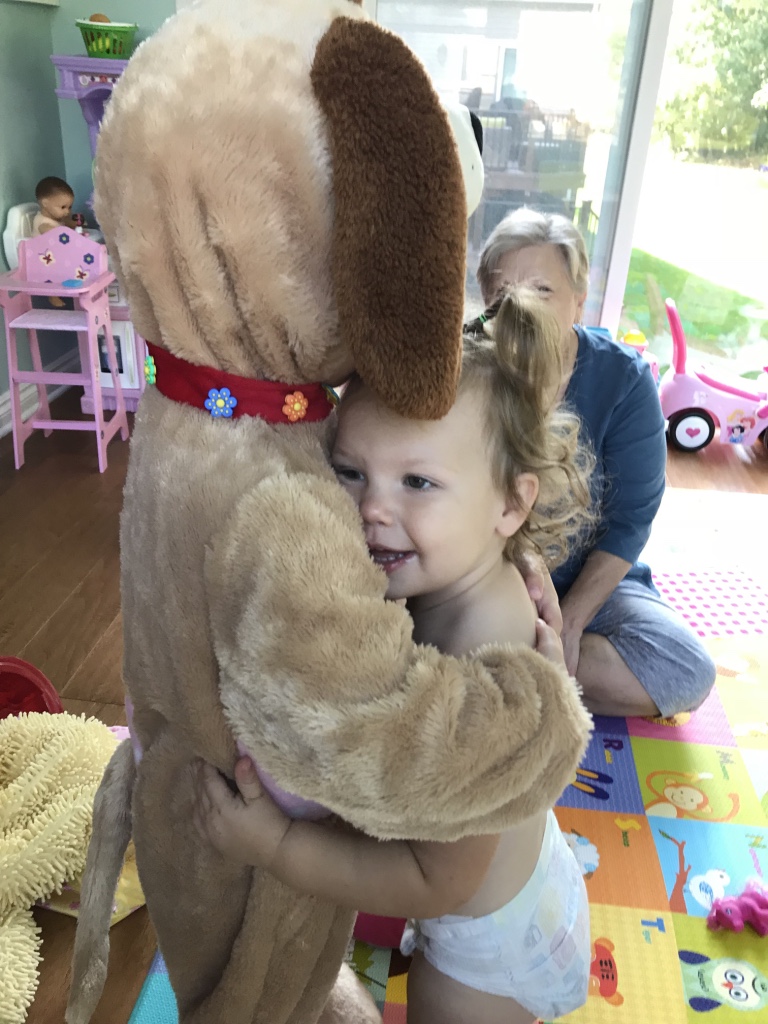 Ems happily tried on the puppy costume, but it was too big for her. Halloween 2019, we’re ready for you! I’m not too concerned about getting Emmy into a costume this year. Lucy was very reluctant at this age as well, but I’m going to leave the costumes out from now until Halloween so that Emily will hopefully get used to seeing them and playing dress up in them. Here’s hoping! 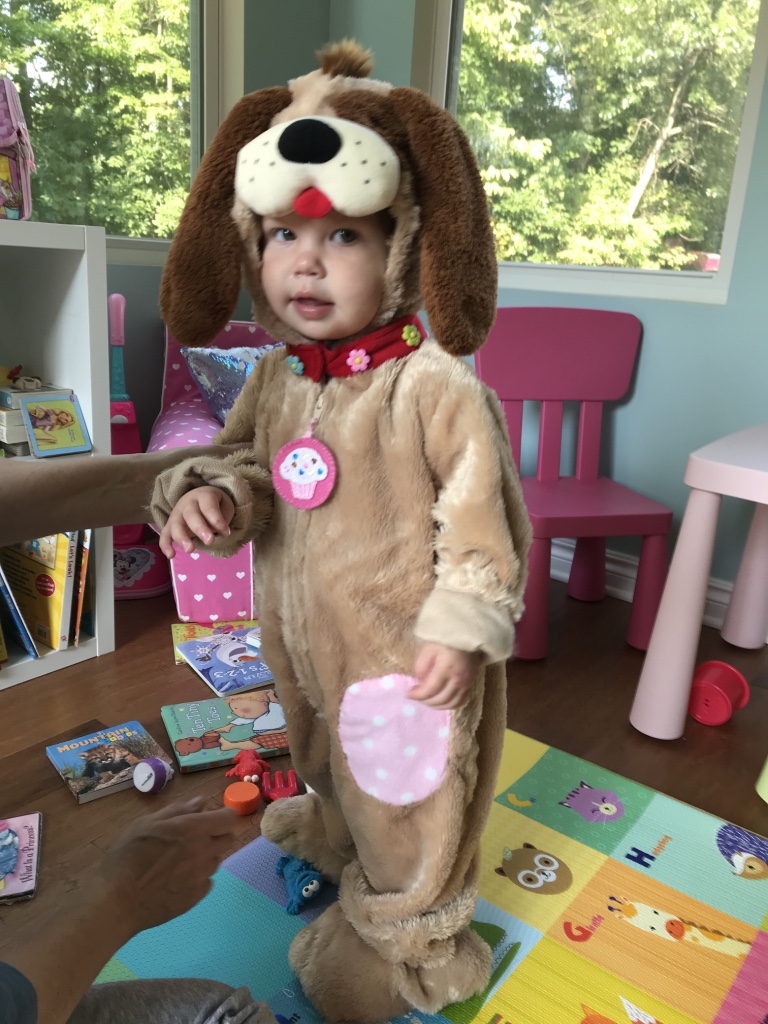 And that’s all I have for today!
Matty comes home Friday afternoon, and it can’t get here fast enough for me!
We have a date night planned for this Saturday, and the weather is only supposed to be in the low 70s so it’s gearing up to be a great weekend!
XOXO