We had a very busy weekend, and this time I remembered to snap quite a few pictures. I got so many cute ones that I’m having a hard time figuring out which one to make as the wallpaper on my phone. #firstworldproblems
Before we get to all the cuteness, though, first let’s talk about how the girls have ganged up on me. Here they are playing together so nicely while they empty out every article of clothing Emmy owns . . . 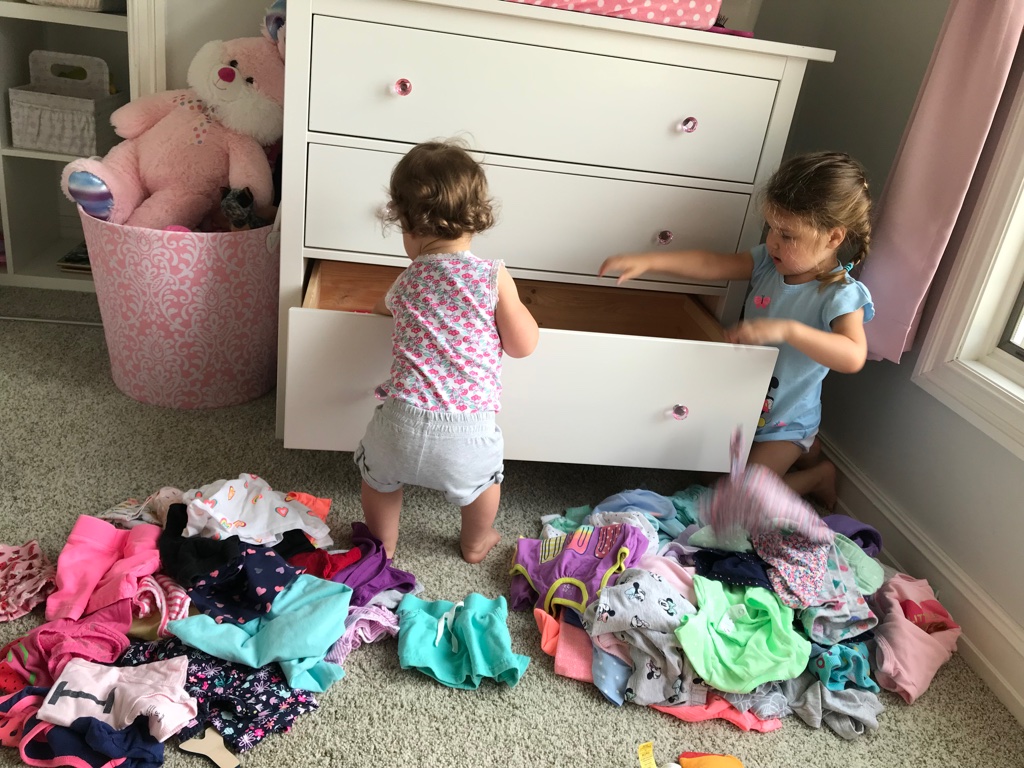 . . . and then here they are taking off every single book from Lucy’s bookshelf. It’s cute and endearing the first time they do it, but around the third or fourth time in the same day I get a little annoyed. My new strategy is to just leave everything on the floor and then have them help me clean up right before bed. 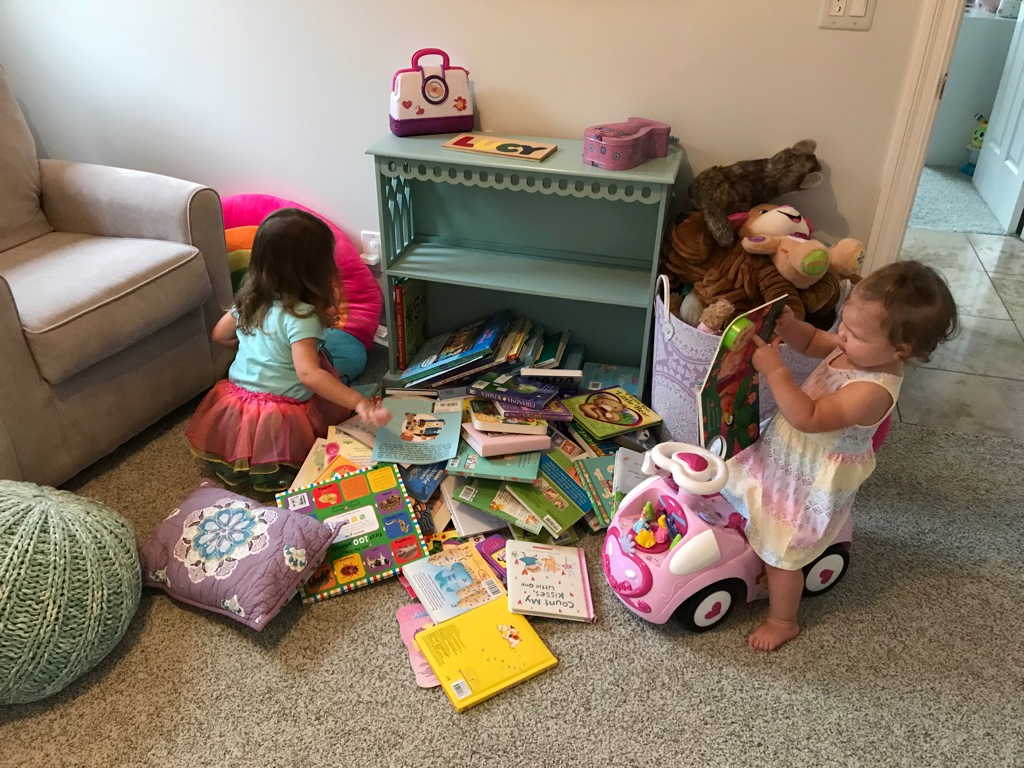 Friday was Take Your Child to Work day at Matty’s work. The girls aren’t old enough to hang for the whole day yet, but we went in to visit Matty for a bit and then went out to lunch. The occasion called for matching dresses. But, if I’m being honest, so does a trip to the grocery! 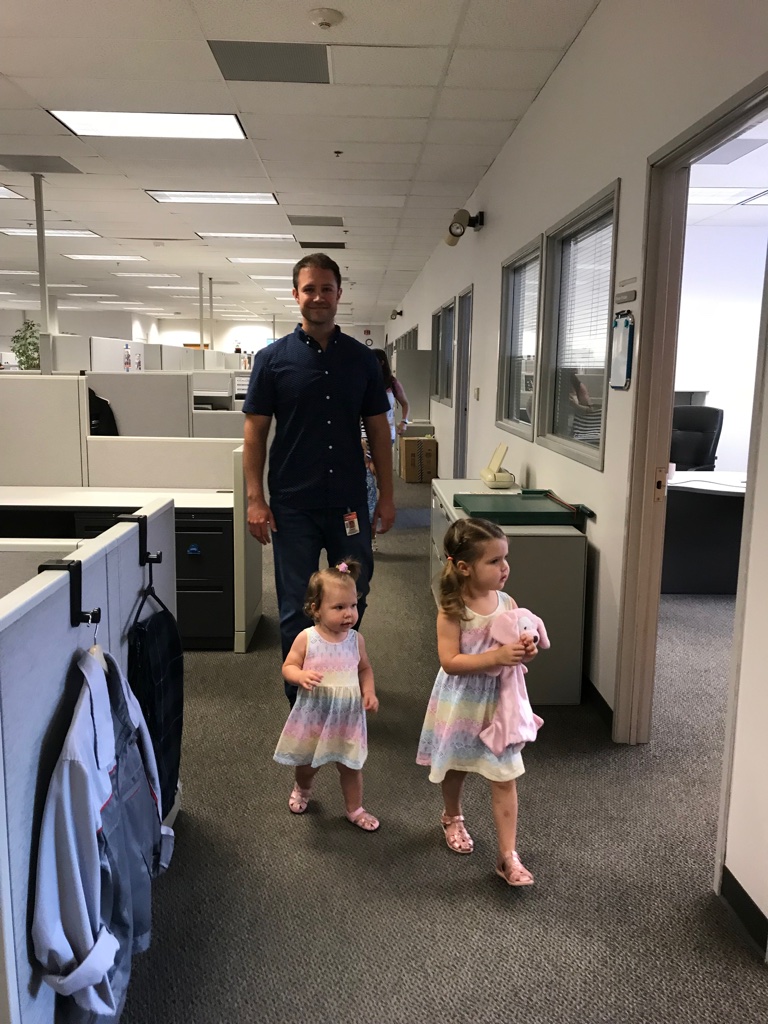 Lucy worked hard while eating cookies at her daddy’s desk and spinning in his chair. (Gotta protect company secrets, so I blocked everything on Matty’s bulletin board!) 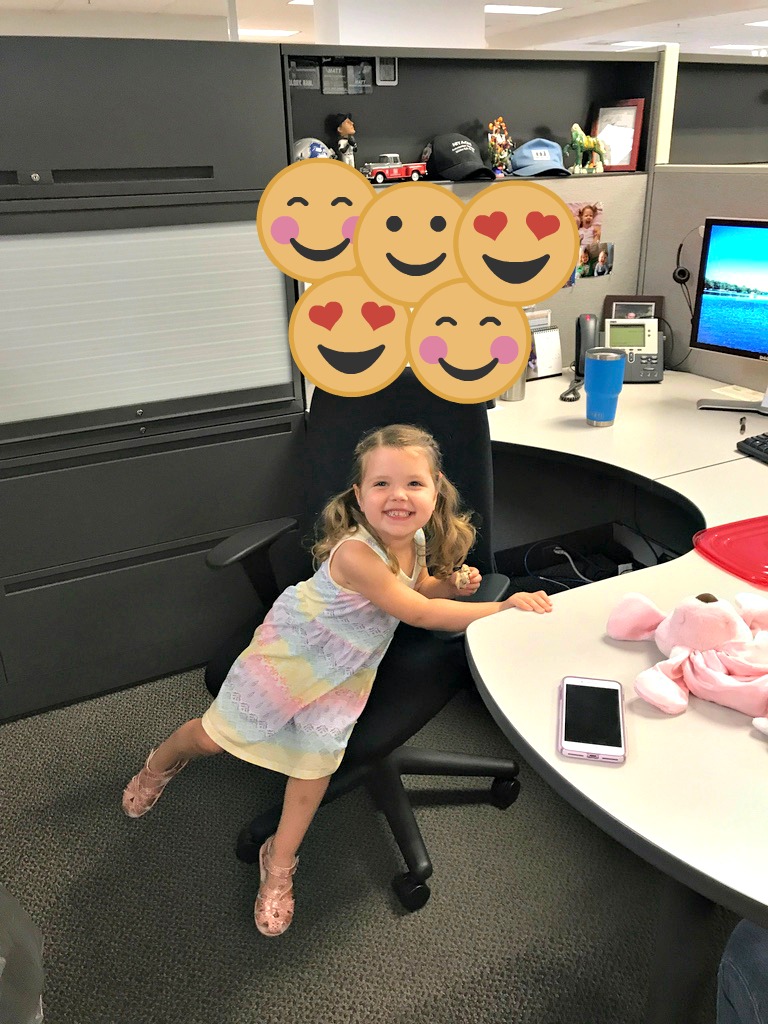 We went out to lunch with another couple and their two girls. I have zero pictures because I was too busy trying to keep the girlies occupied in between running Lucy to the bathroom three times in one meal! 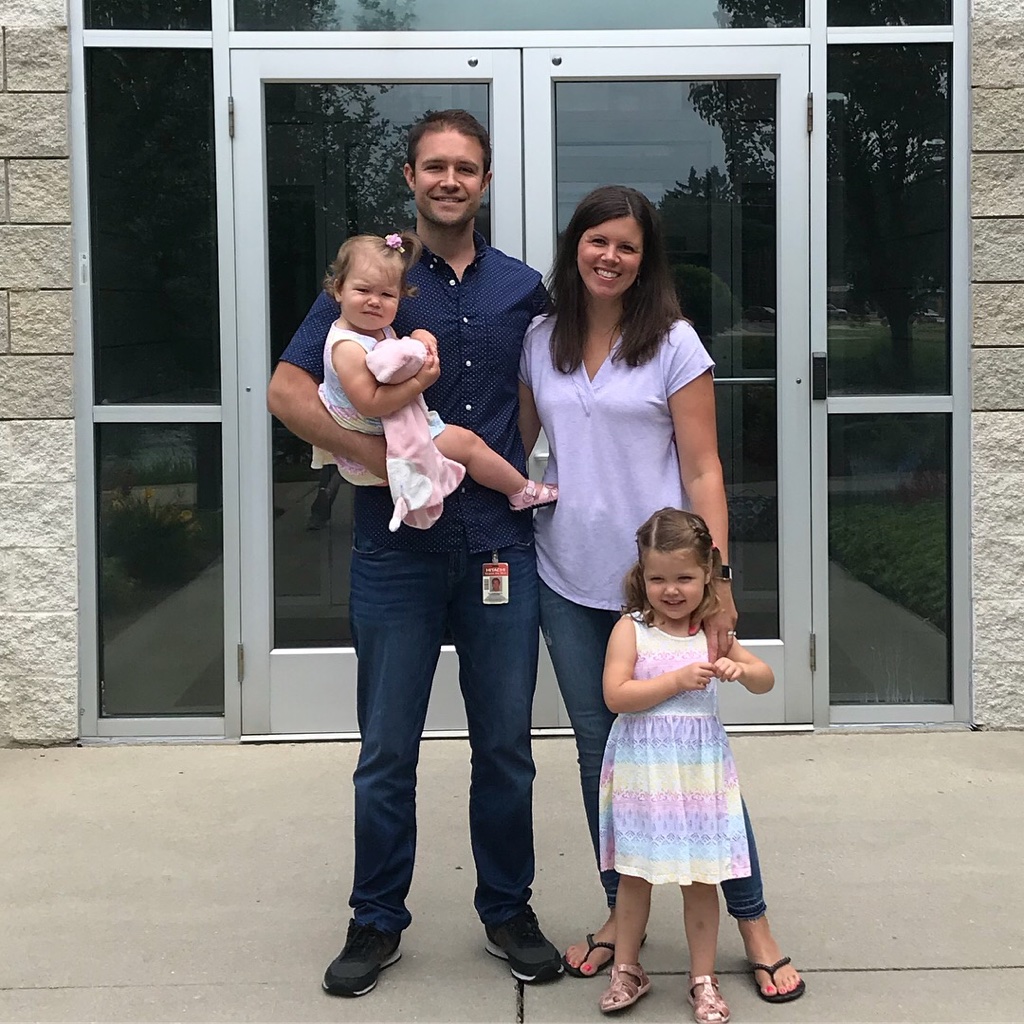 On Friday night, Matty was kind enough to tackle bath and bedtime on his own so I could go hang out with my mama friends. I only took one picture the entire night, and it was of these Klondike bars that Leslie brought. They were delicious and paired perfectly with our margaritas! 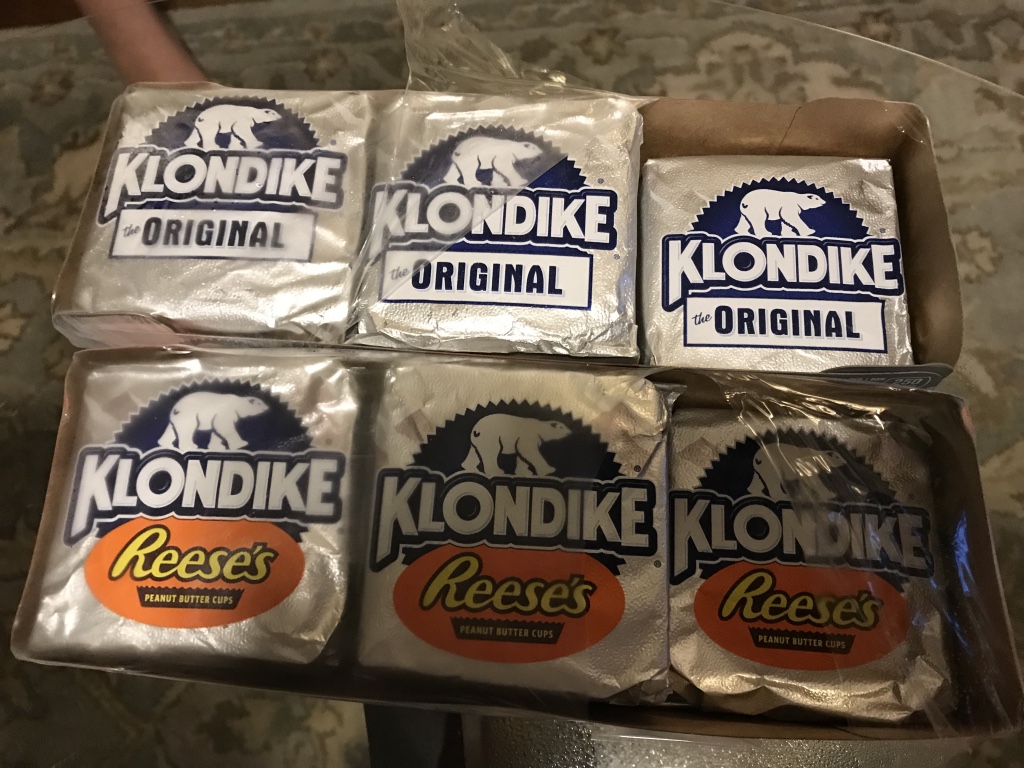 Saturday morning we threw caution to the wind and took the girls shopping in downtown Birmingham and Somerset and then to lunch at Shake Shack. That’s three stops! It was tiring, but surprisingly fun. The girls were so cute at Somerset, and if I had a dollar for every person that commented on their cuteness, I could have bought myself a nice little outfit while we were there 😉
Now that Emmy Roses has discovered walking, it’s all she wants to do. Thankfully the mall wasn’t super crowded yet, so we could give her a little freedom. 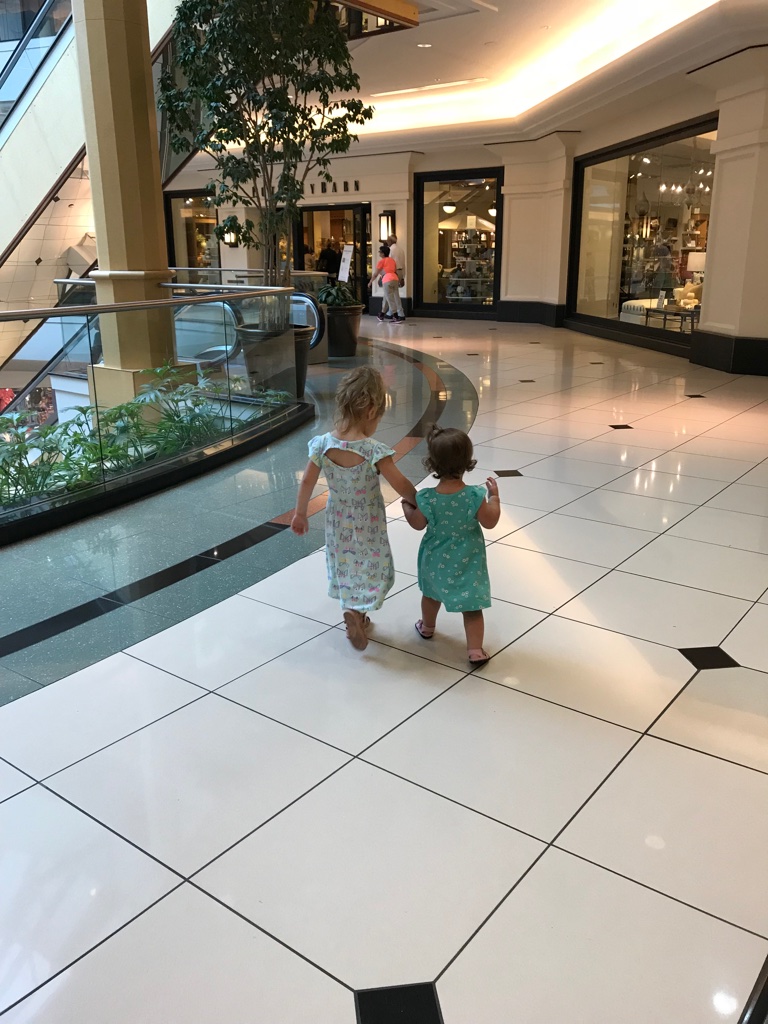 I’d love this picture more if I didn’t have the diaper bag on. I had just gotten back from taking Lucy to do ALL her business in the bathroom at Pottery Barn and then to change Em’s massive dirty diaper at Nordstrom. Side note: if you are ever at a mall and in need of a changing station, look for a Nordstrom or Von Maur before going anywhere else. They have the best baby changing and nursing areas! 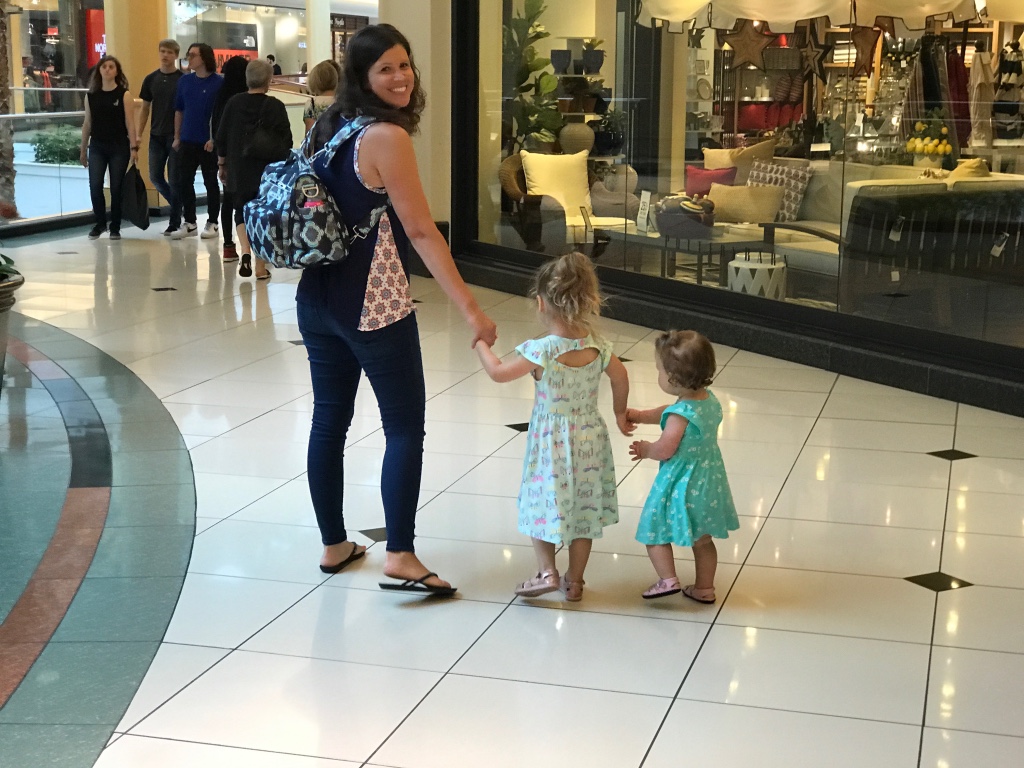 In case you were wondering, this picture is currently the wallpaper on my phone. That is Em’s new smile, and it is priceless! 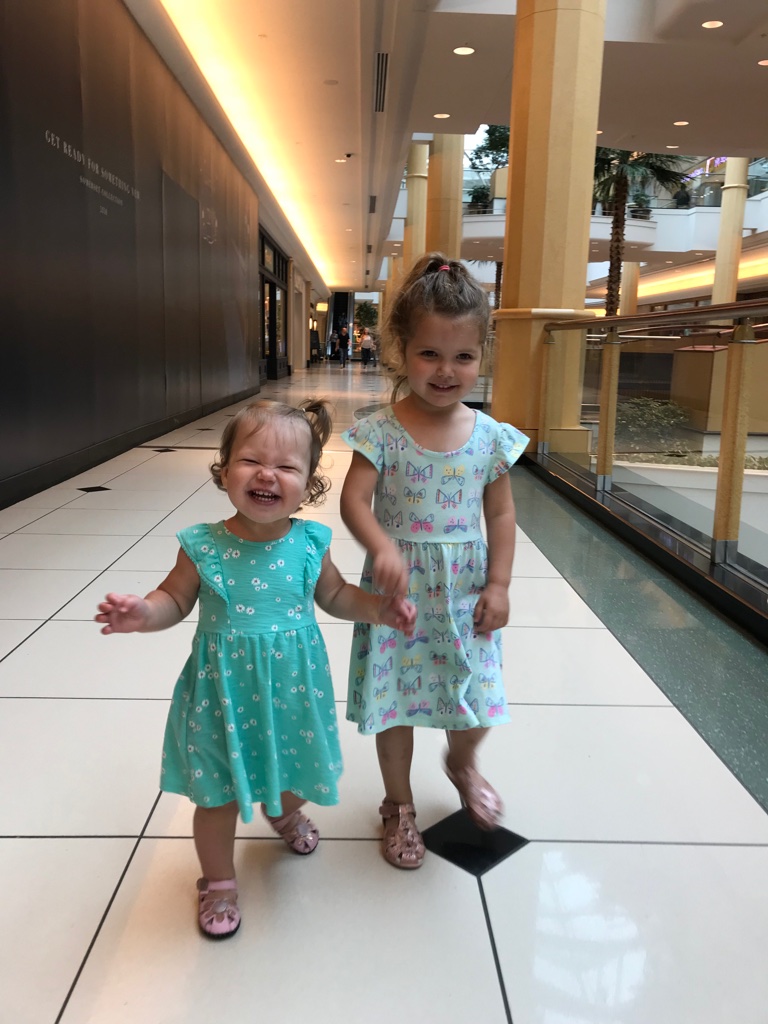 I knew the Skywalk at Somerset was long . . . but it seemed never ending while waiting for a new walker to make it all the way across! 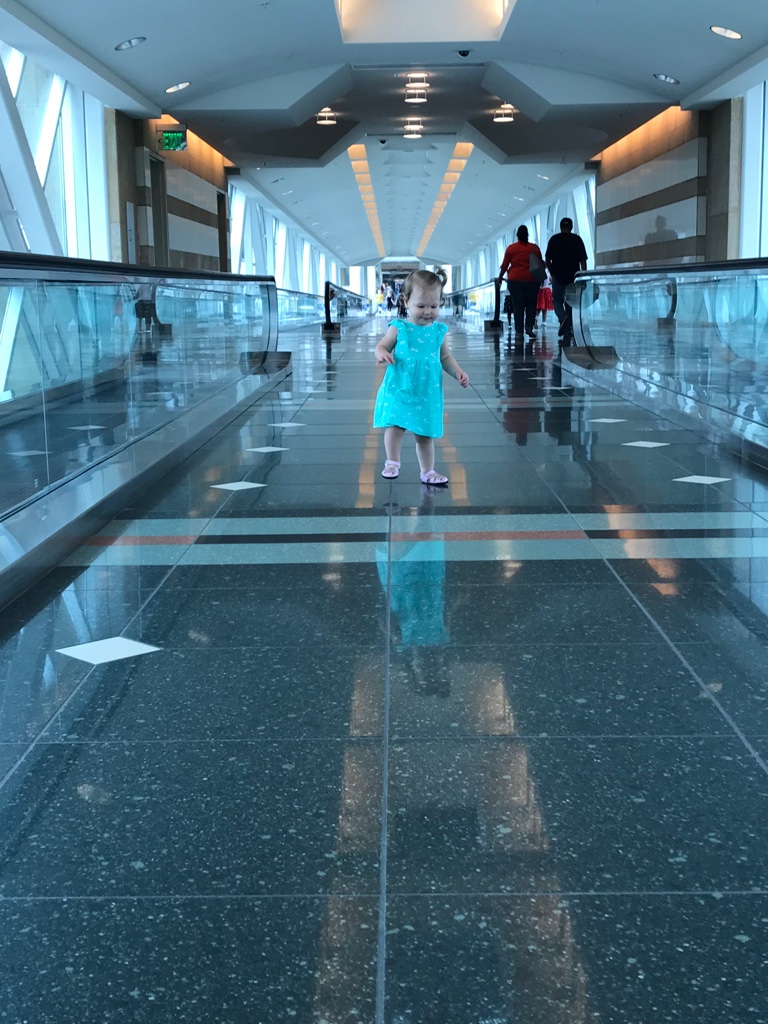 The wait wasn’t super long at Shake Shack, but it was too long for Emmy. I had packed three snacks for each girl, and they blew right through them at the mall so I had nothing left to offer! 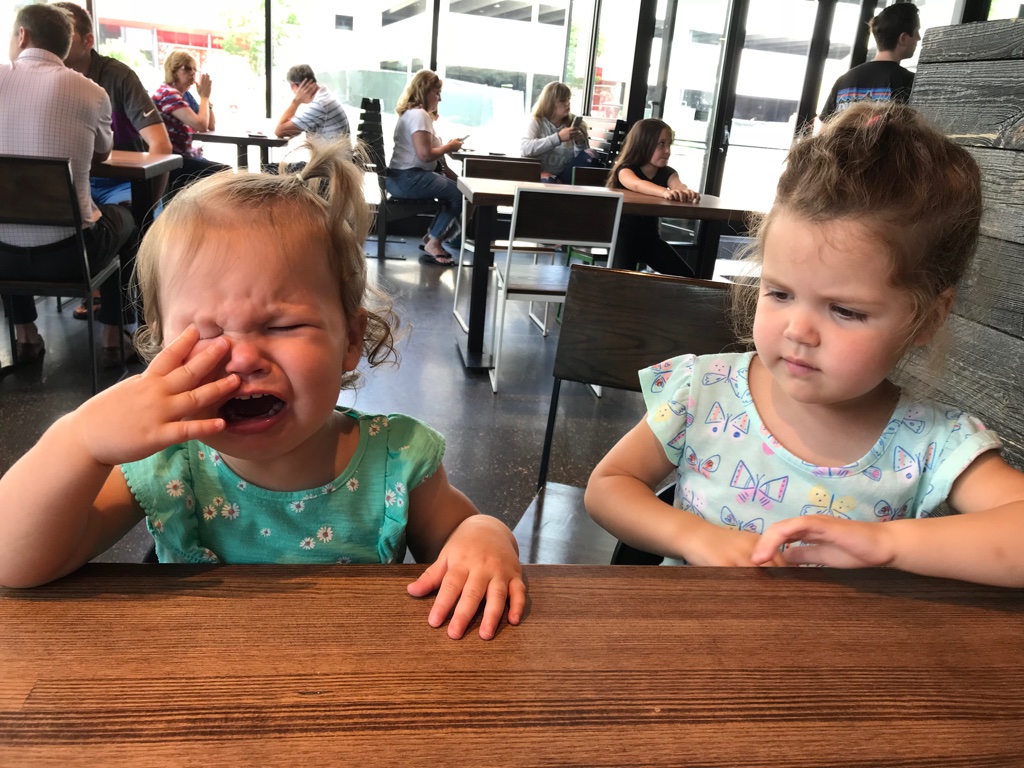 She perked right up as soon as the french fries and ketchup appeared! 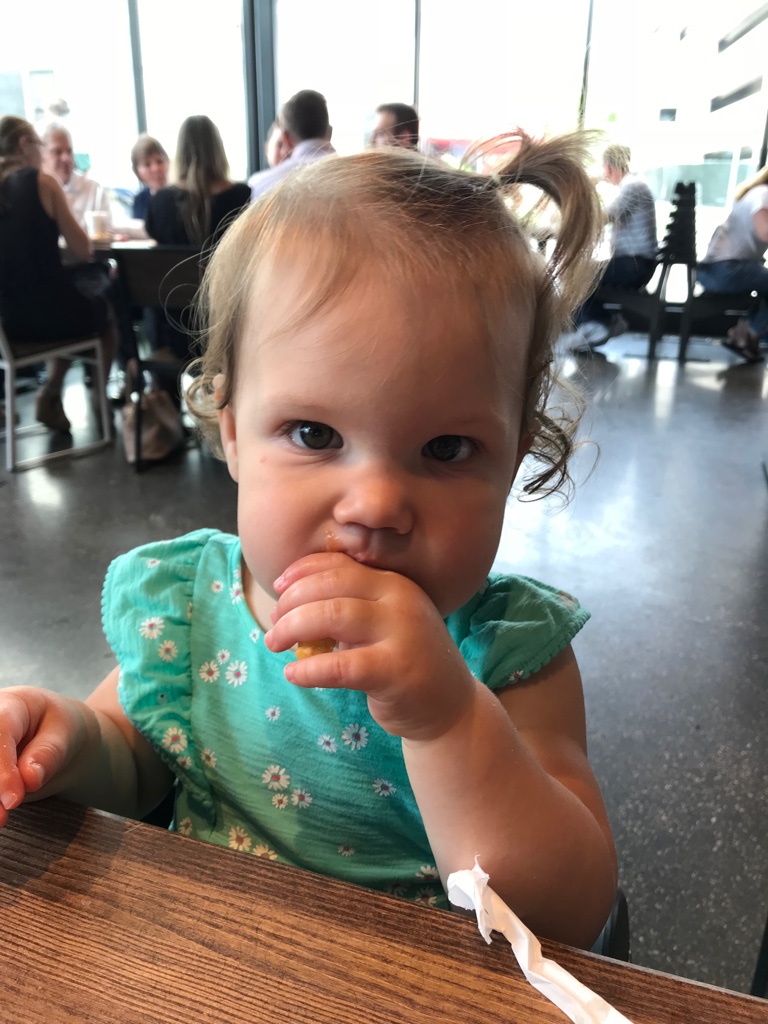 You guys, the chocolate shake was soooo delicious! Lucy willingly ate her hamburger so she could get more of it. 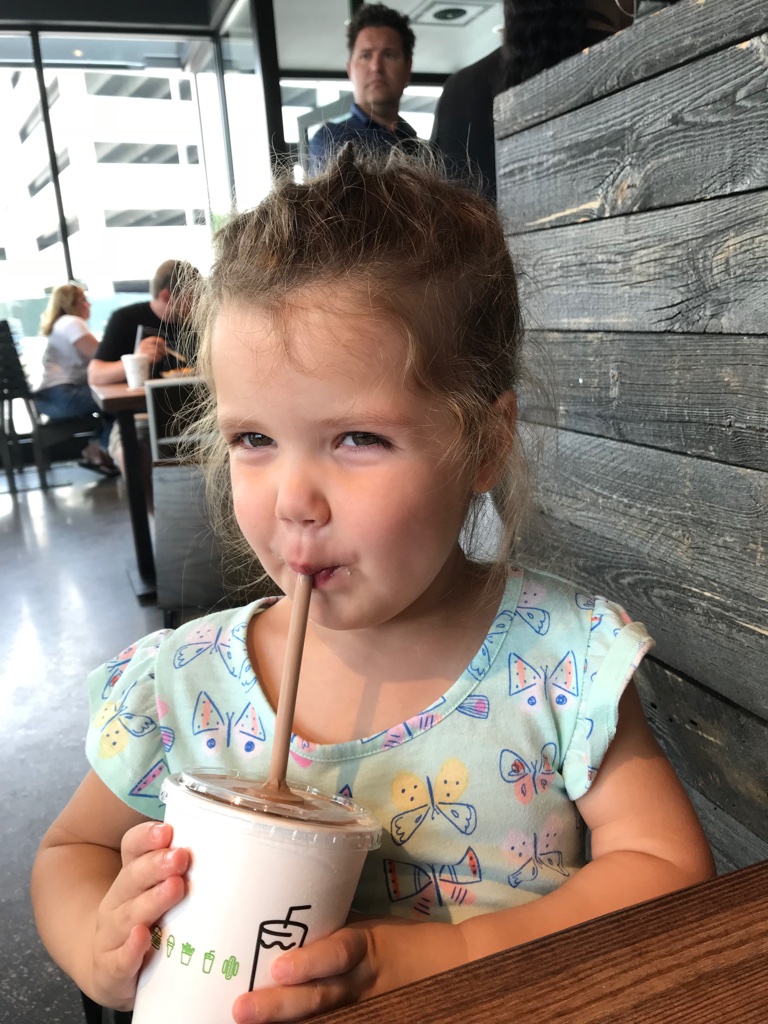 Lucy had one job on the ride home, and it was to keep Emily awake. Her work ethic needs some improvement. 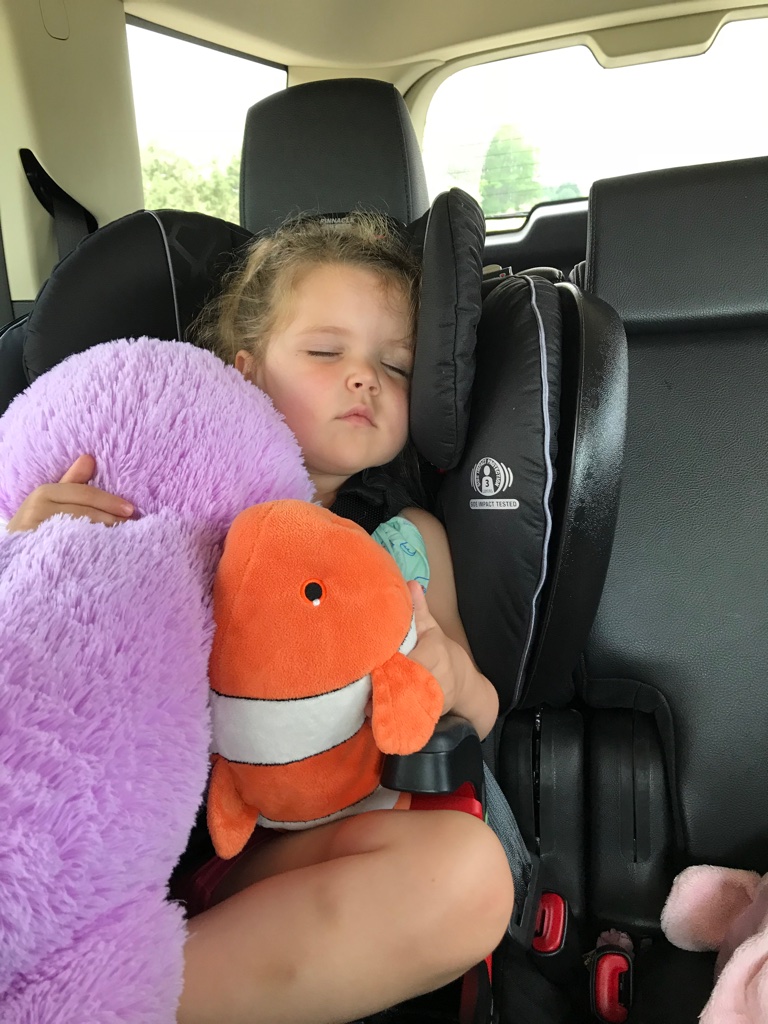 Lucy is starting a ballet class in July, and her outfit arrived on Saturday. She couldn’t stop doing ballet moves long enough for me to get a decent picture. 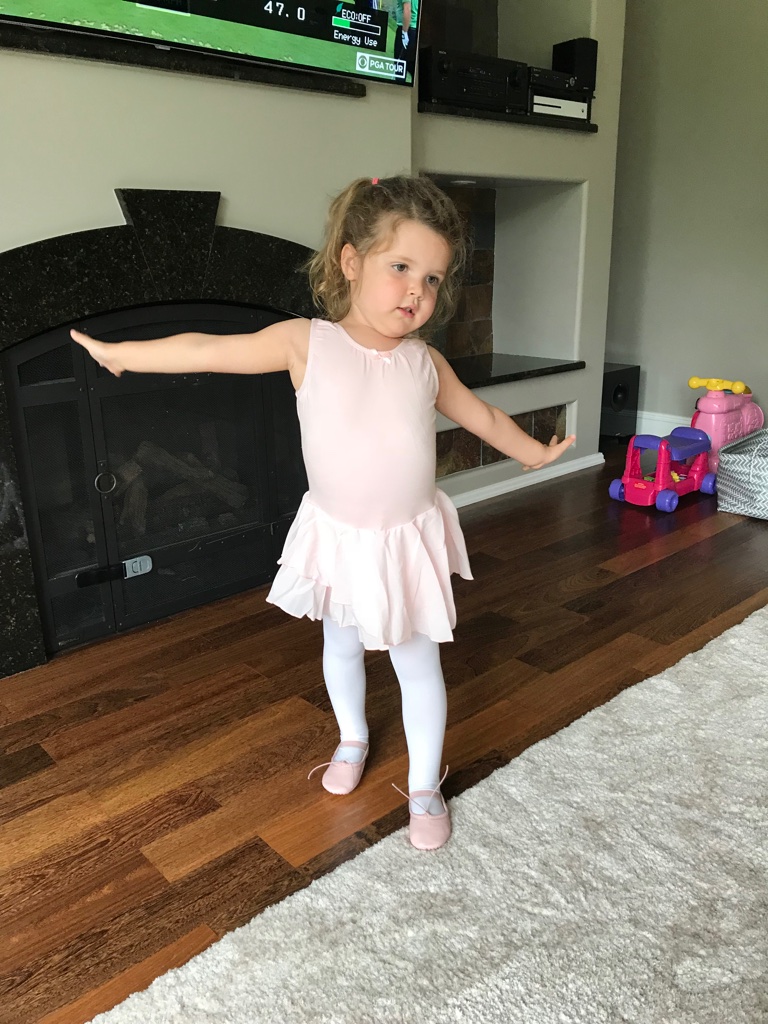 And then she wanted Emmy to be a ballerina too, so we broke out Lucy’s old dress up tutu. 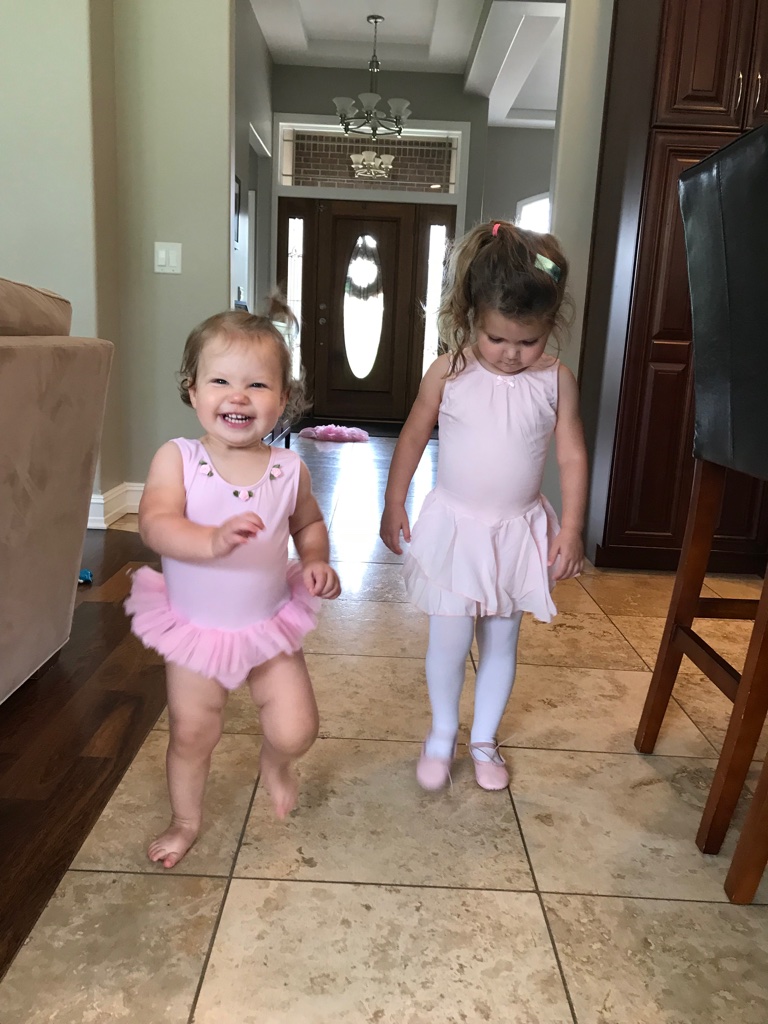 Sunday was a beautiful morning so we drove to a different park to play and then walked around the pond to look at the ducks before stopping at the grocery on the way home. Apparently, Matty and Emmy played so hard that they needed a little snack. Emmy got a piece of bread, and Matty made himself a little sandwich right as the lady handed us our things from the deli. 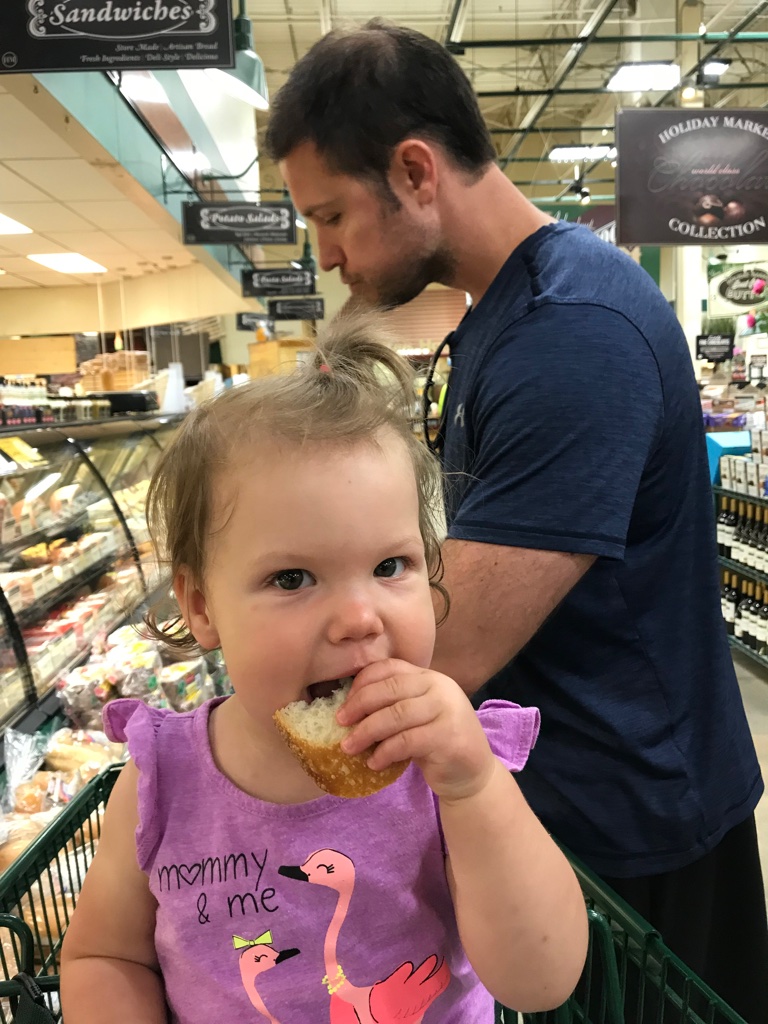 When Lucy styles her own hair! 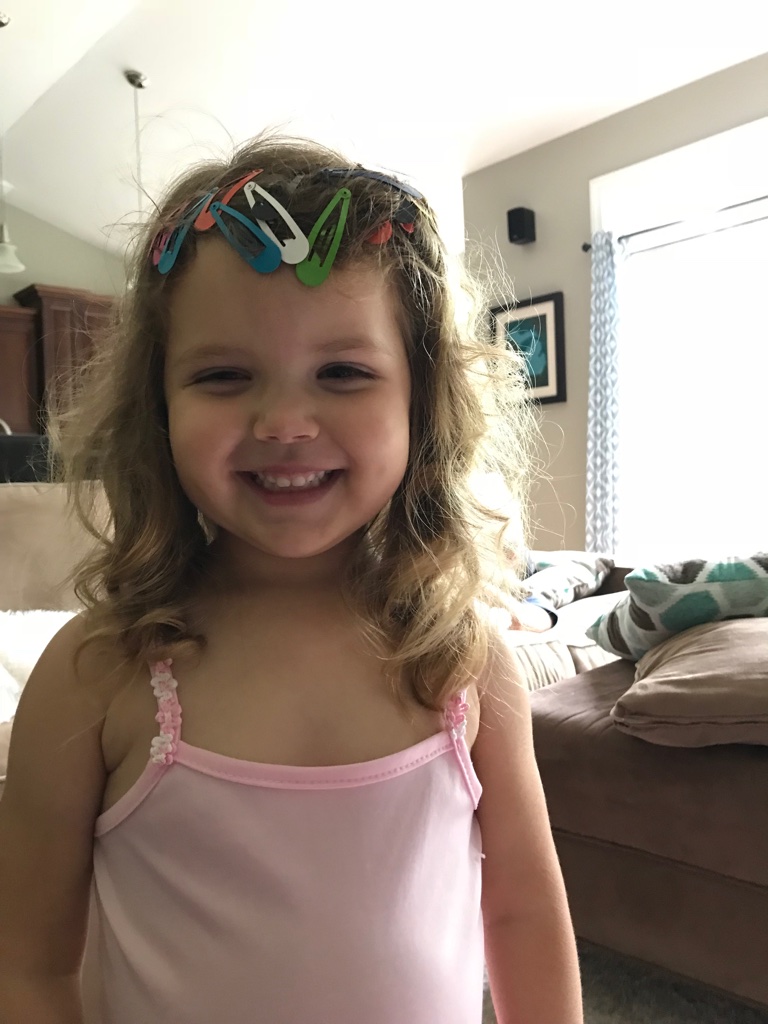 We ended our weekend with a walk through the park. We brought Emmy’s little car with us, but she pretty much walked the entire way! 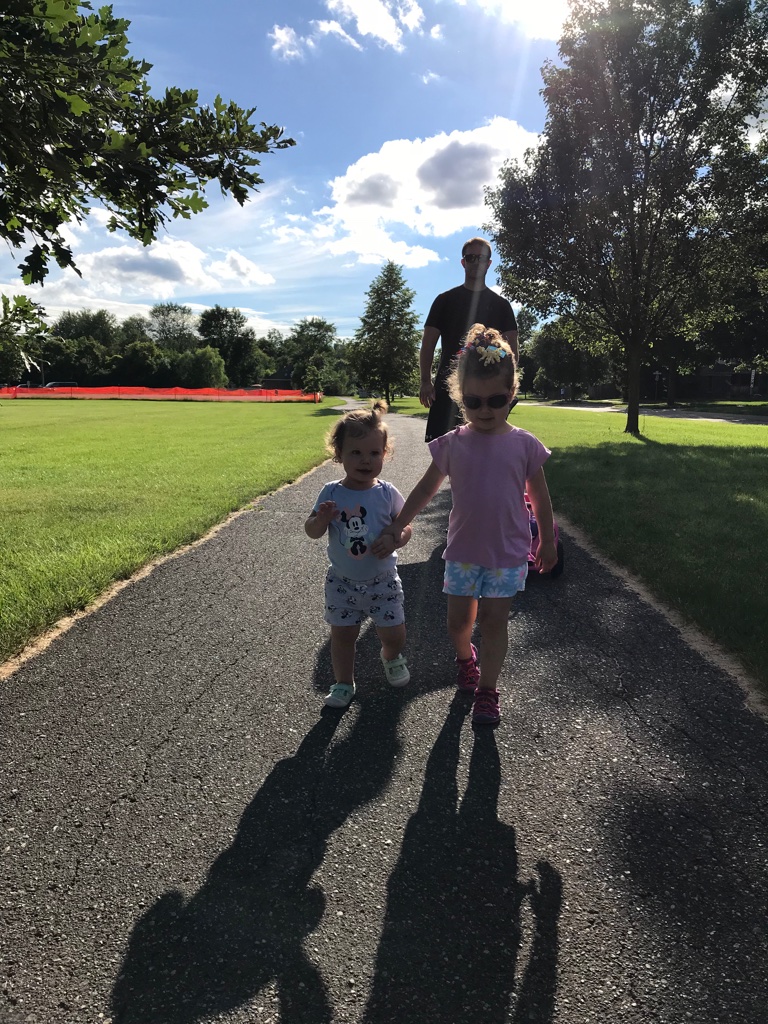 We decided to let Emmy lead the way. She got off track a few times, but generally followed the path. Now that she’s gotten a taste of freedom, I’m pretty sure my days of having one girl roam and the other in a stroller are over! 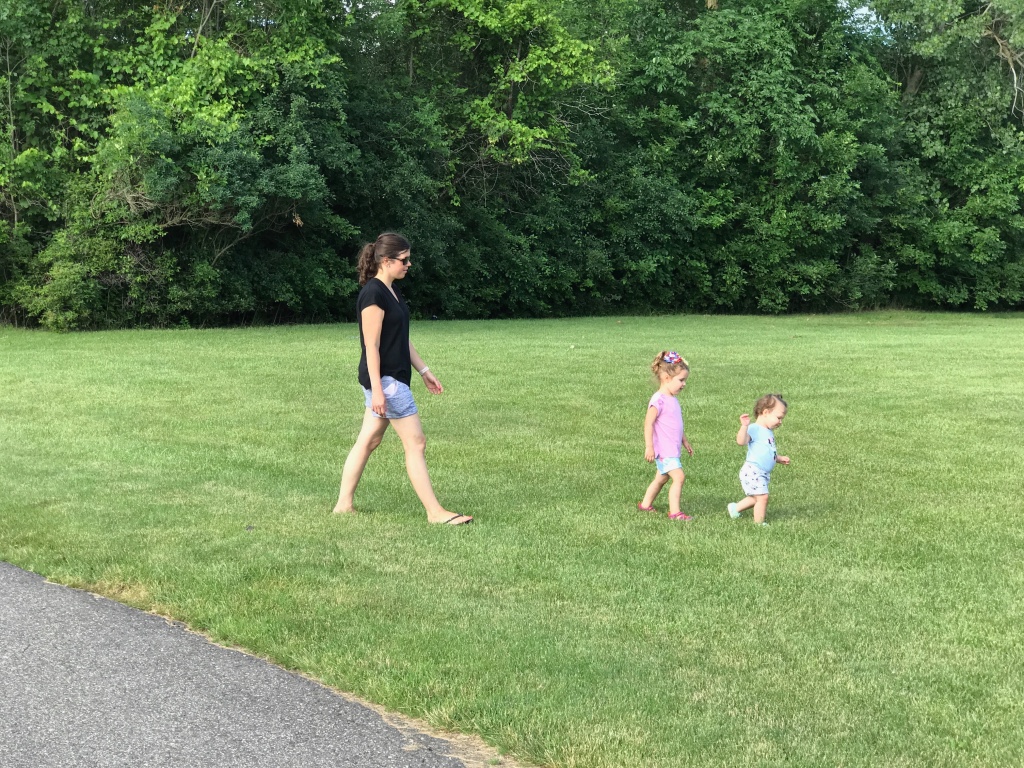 It was a busy weekend, but a good one. The weather was perfect for playing outside . . .warm enough to feel like summer, but not so warm that I was uncomfortable chasing the girls around. There’s nothing worse than needing a second shower by lunchtime!
Have a great week!
XOXO