Happy Thursday!
Summer arrived this week, and we aren’t sad about it! Here’s a little glimpse into what we’ve been up to this week.
Starting it off strong with a super important picture of my morning waffle. I picked these up at Meijer a few weeks ago and have been enjoying one in the morning with a little almond butter. 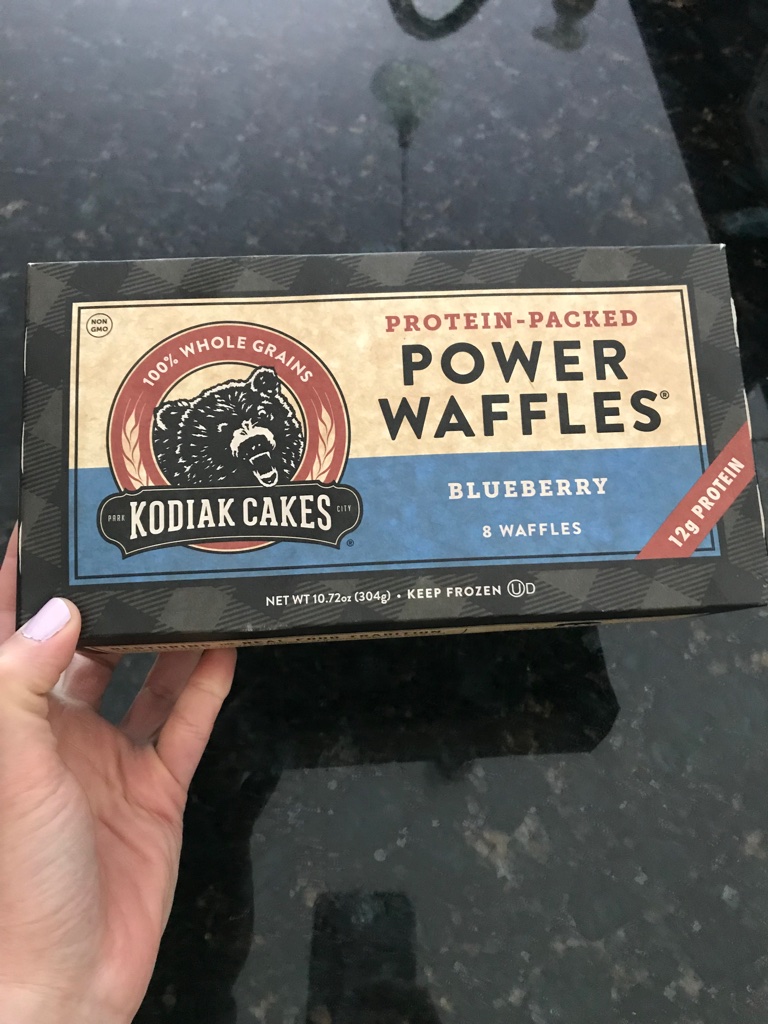 The house across the street from us knocked down their rickety old wooden fence and had a bunch of big trees cut down on Monday. It provided all day entertainment for the girls! 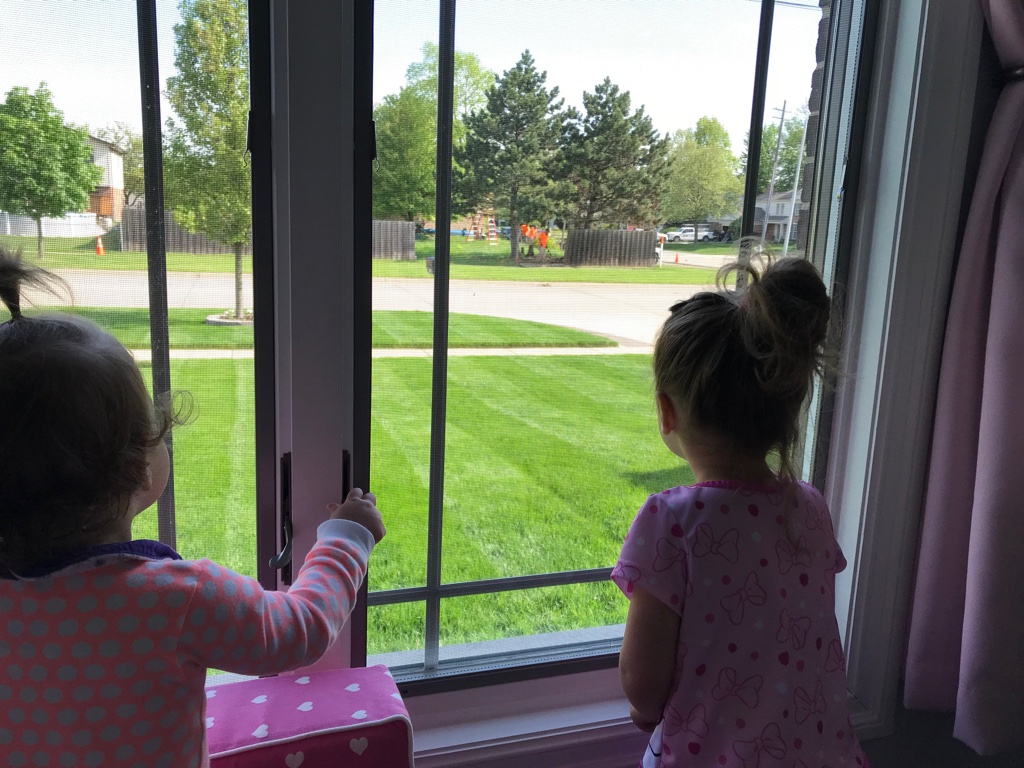 We have ourselves a biter, folks! Lucy stole a book from Emmy the other day and took it up into her chair to read. When Emmy tried to grab it back, Lucy pushed her away so Ems leaned down and bit Lucy’s leg! Not cool, but totally justified. 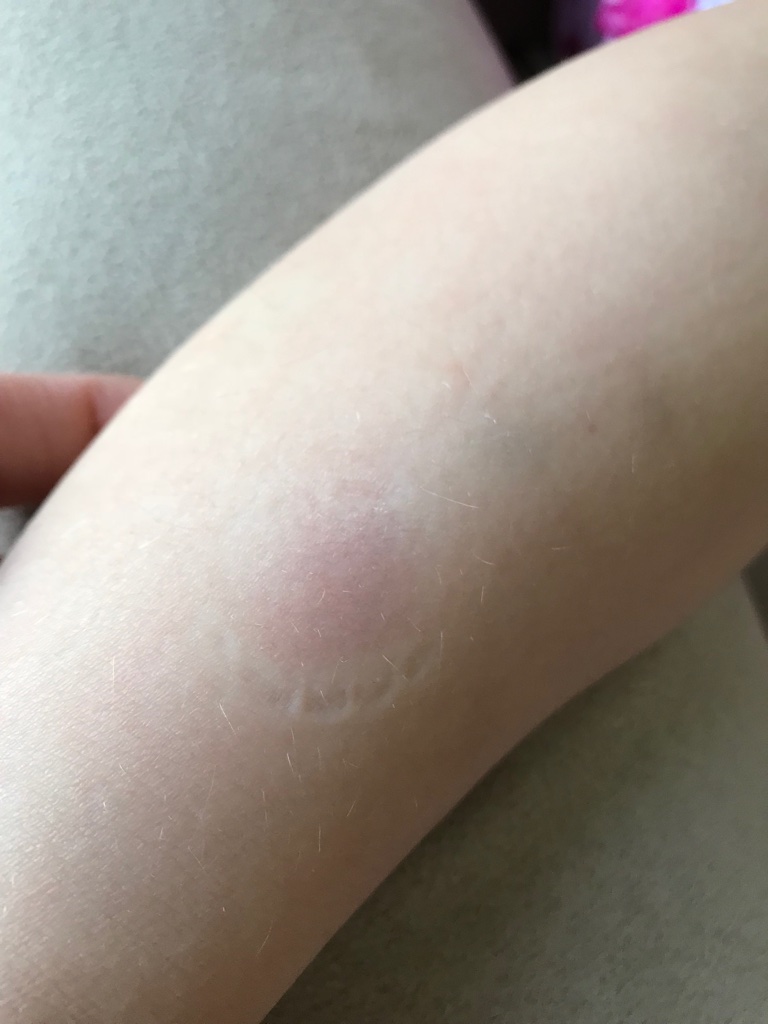 Emmy woke up from her nap and was so excited to see Grandma Ri! 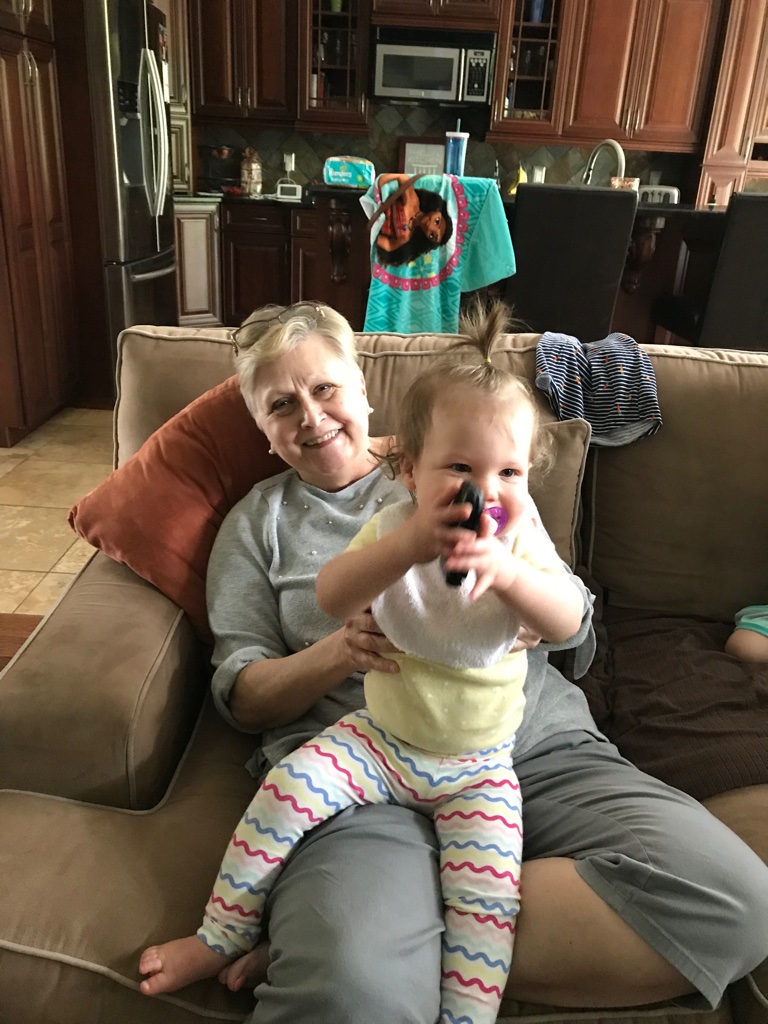 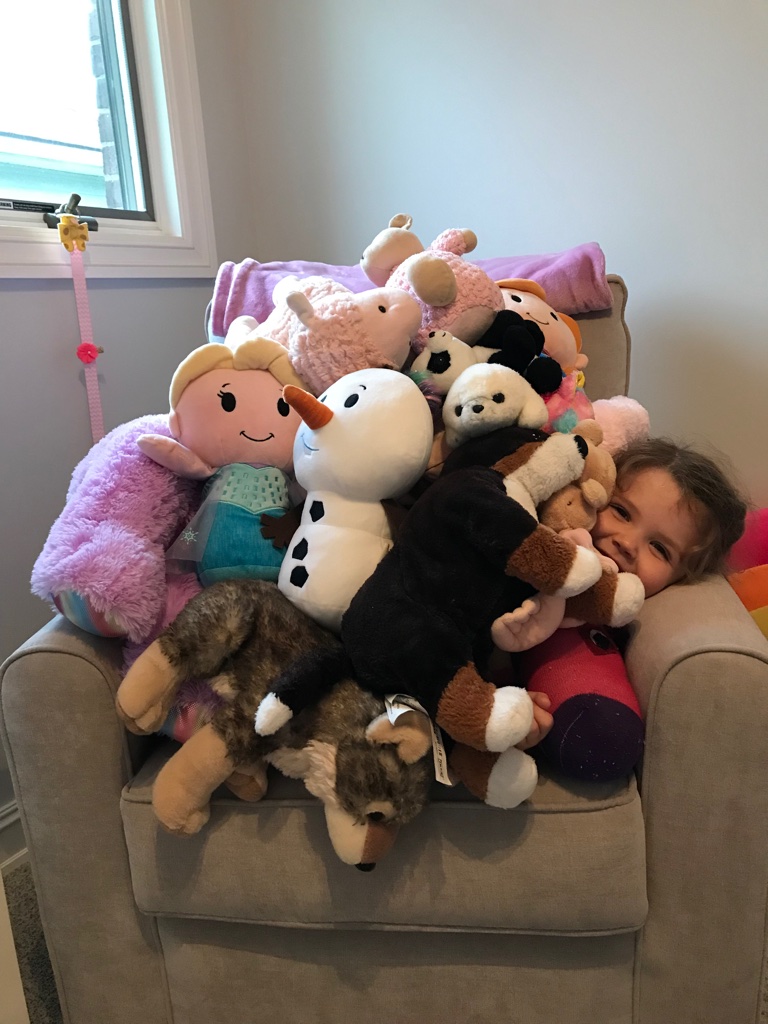 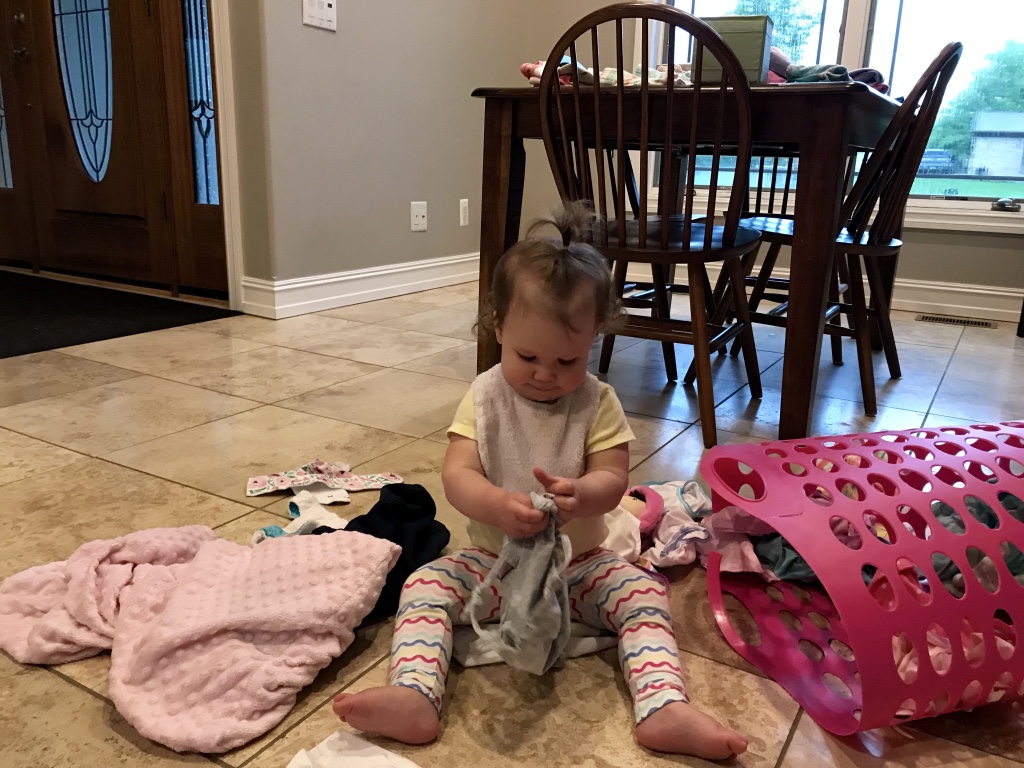 They now have a baby swing at the playground at Lucy’s school, and, boy, is it a hot commodity! 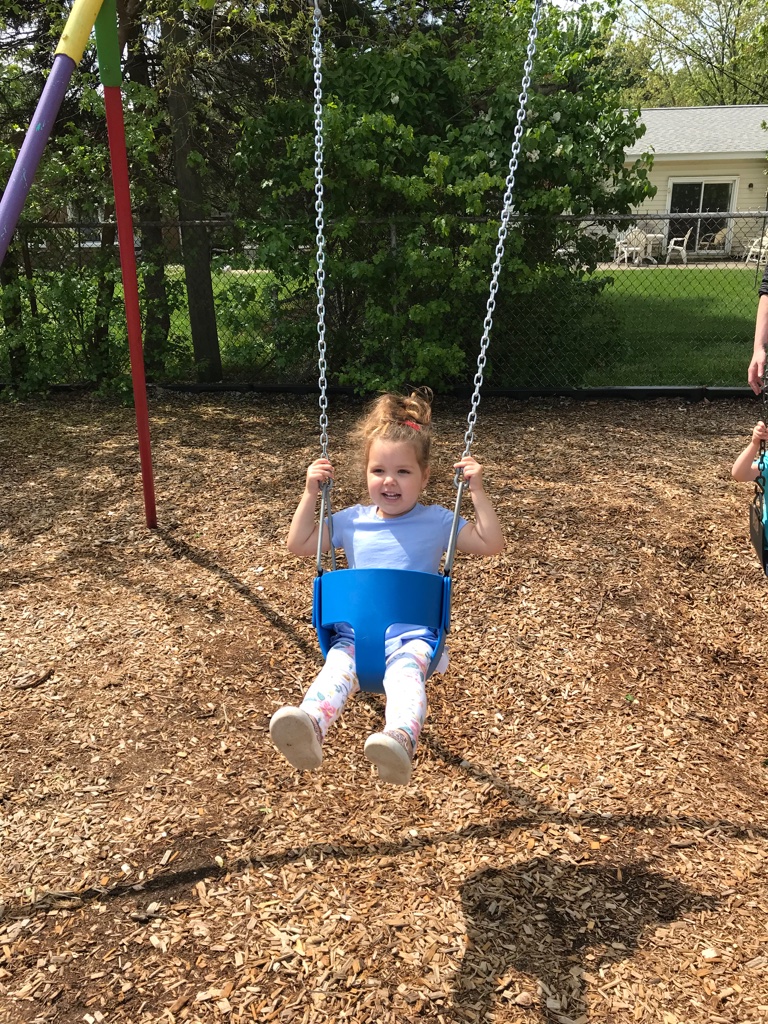 Making sure mama got everything at Costco. Why don’t all groceries have carts like this?? 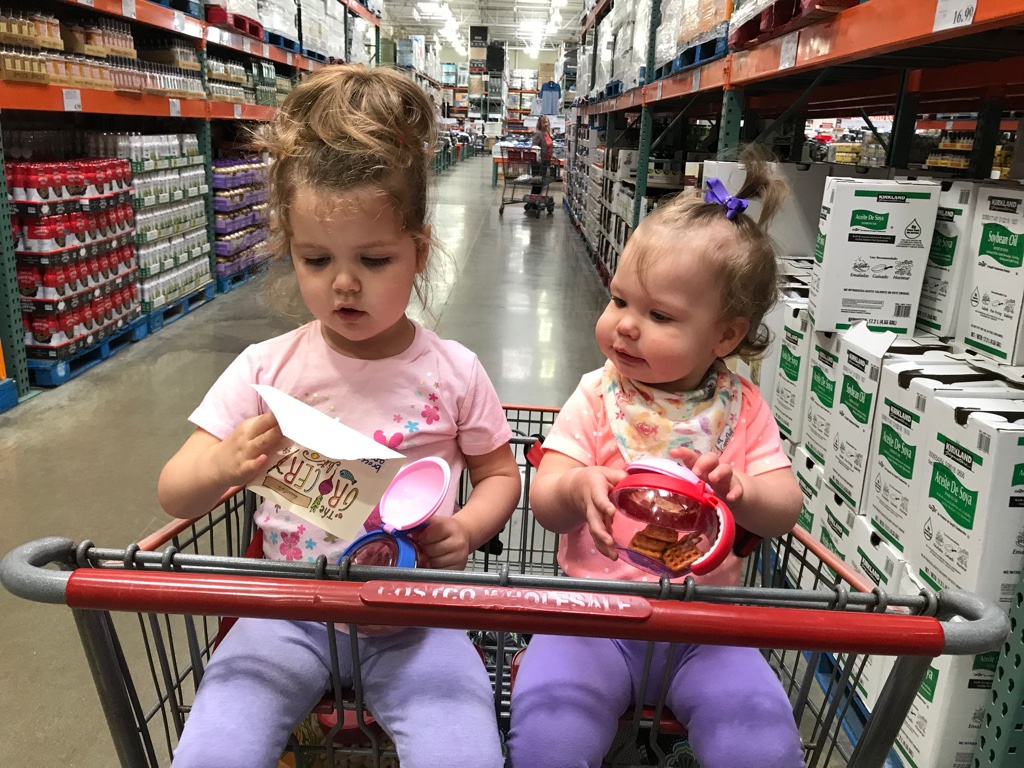 Ok, this is a public service announcement for anyone who likes pie . . . which normally I don’t. Costco’s Key Lime Pie is THE. BEST. I tried it for the first time last summer, and kept bringing it up all summer but never had an occasion to buy such a gigantic pie. I knew I was going to Costco on Tuesday, and when Matty and I were getting ready in the morning I mentioned that it would be awesome if they had it. My dream came true, and it’s every bit as good as I remember it! Still, I didn’t buy one. If I ever have an occasion where I need to feed like 15 people dessert, though, you can bet I’ll be high tailing it to Costco for this pie. (Along those same lines . . . if 15 people want to set up a day to come to my house to do nothing but eat key lime pie, I’m totally in! Maybe Mom’s Night Out: Key Lime Pie Edition!) 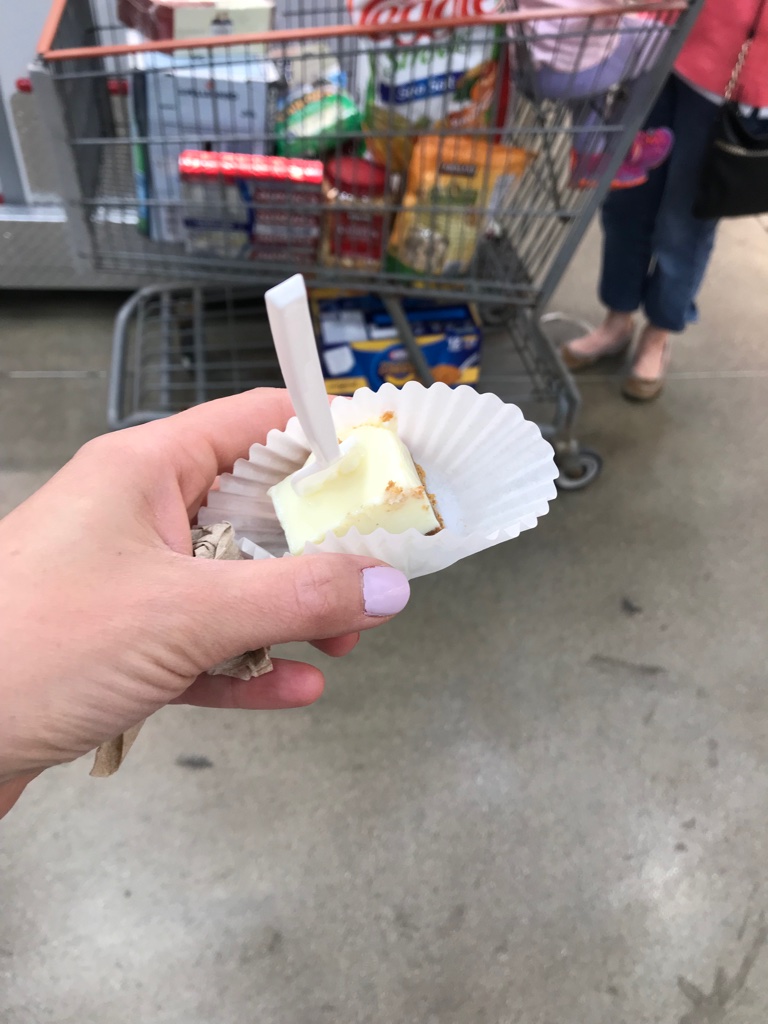 I’m not the only one who found it delicious. First the girls dined on a cheese quesadilla and then finished it off with some key lime pie. #thankscostco 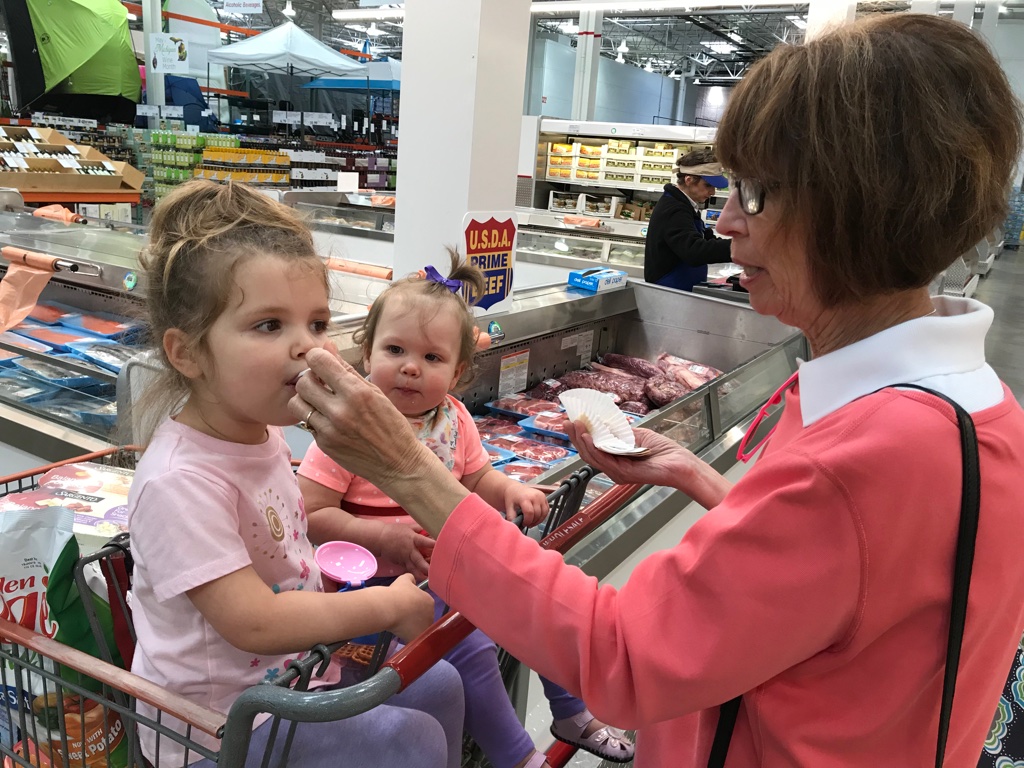 And in one of my most successful Costco trips to date, I also picked up a huge new area rug for our living room. The dingos really destroyed our current rug, and we knew we wanted to replace it. We looked into getting an area rug made, but it was pretty pricey . . . and remember that never ending debate about whether or not to move?? Seemed silly to spend $700 on a custom made area rug when we don’t know if we want to stay here.
Tuesday is Matty’s golf night, so after the girls were in bed I decided it was time to roll up the old rug, move the super heavy furniture, vacuum up the last of the dog fur, and mop the floor. It was quite the job, and I ended up having to wait until Matty got home to move the furniture back because I just couldn’t move it again by myself! 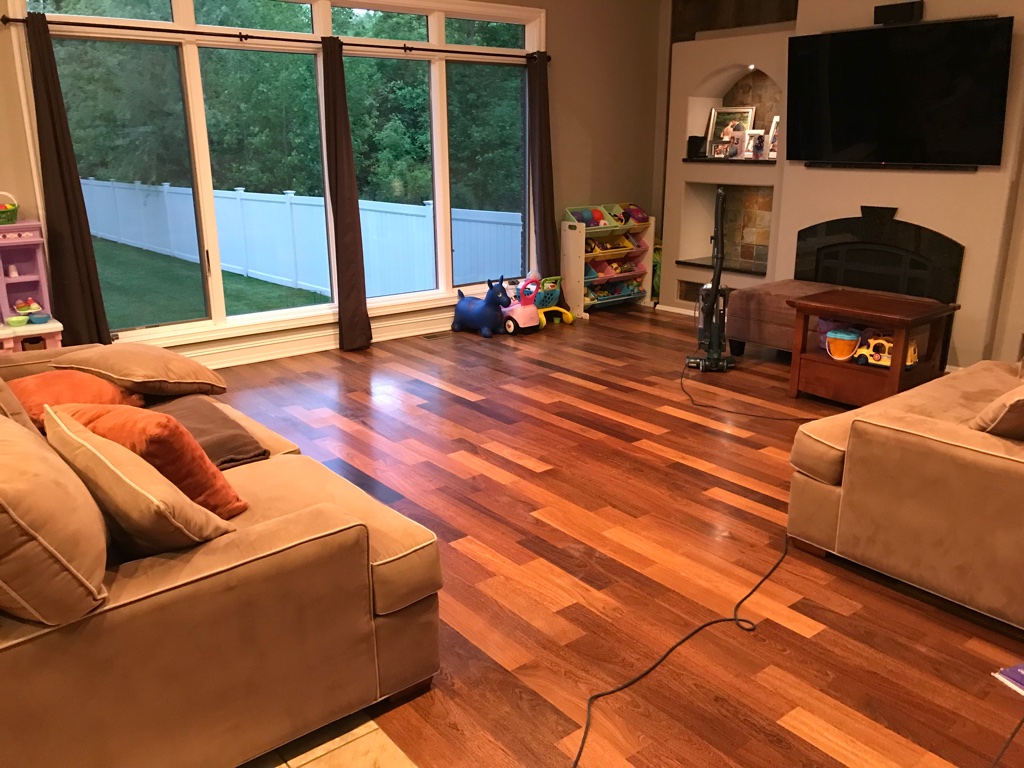 We love the new rug! It’s bigger, so much lighter, smells great, and has no dog hair on it!! I didn’t feel badly at all about having clean laundry spread over it by Emmy Roses. 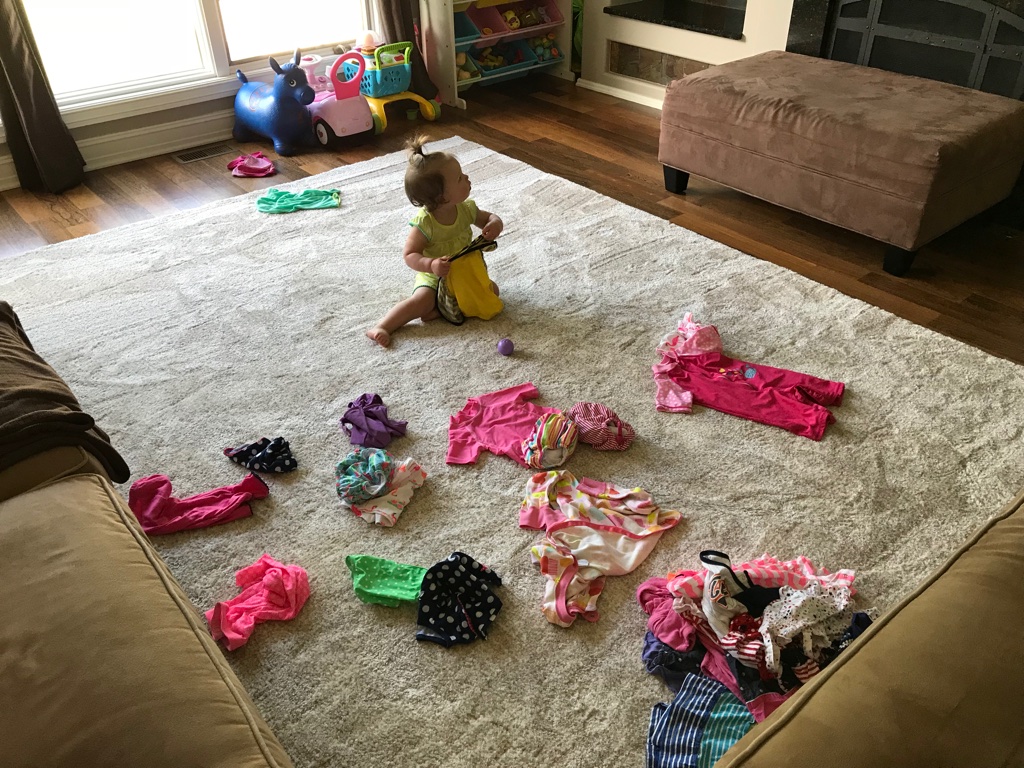 Lucy was living the life while Emmy napped yesterday. 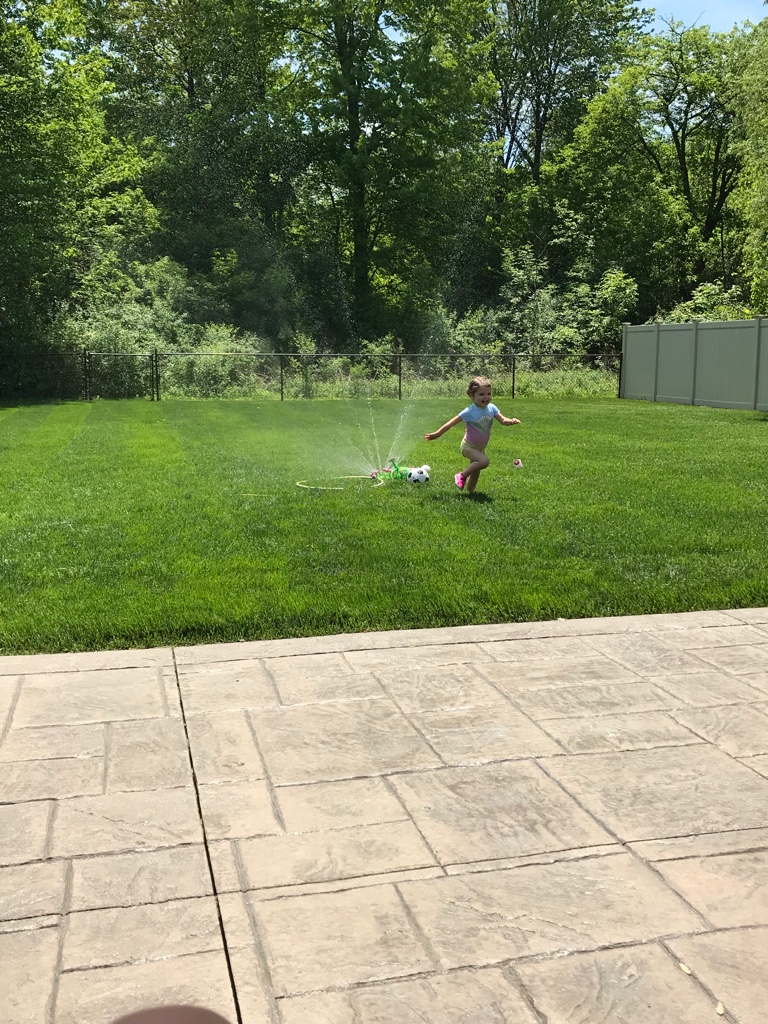 Emmy had her first experience with a sprinkler yesterday. I turned it on low to start. 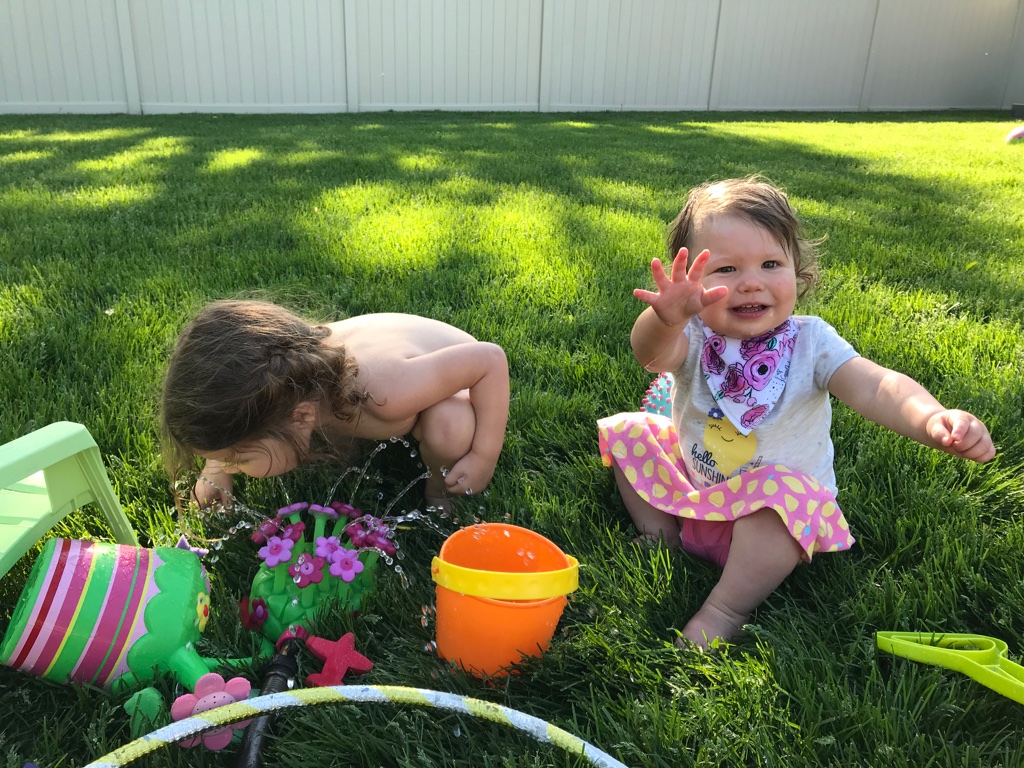 Yes, she was fully clothed! The main reason was because the girls’ bathing suits were already packed for the cottage this weekend, and also it was like 6:15 so bath time was right around the corner. 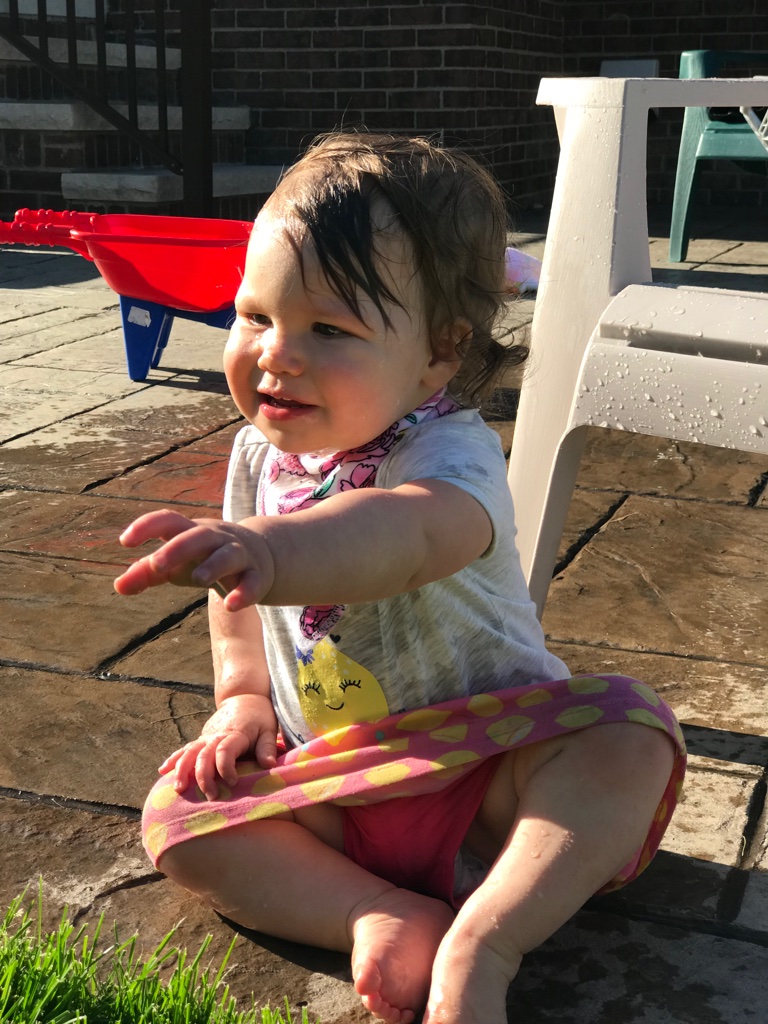 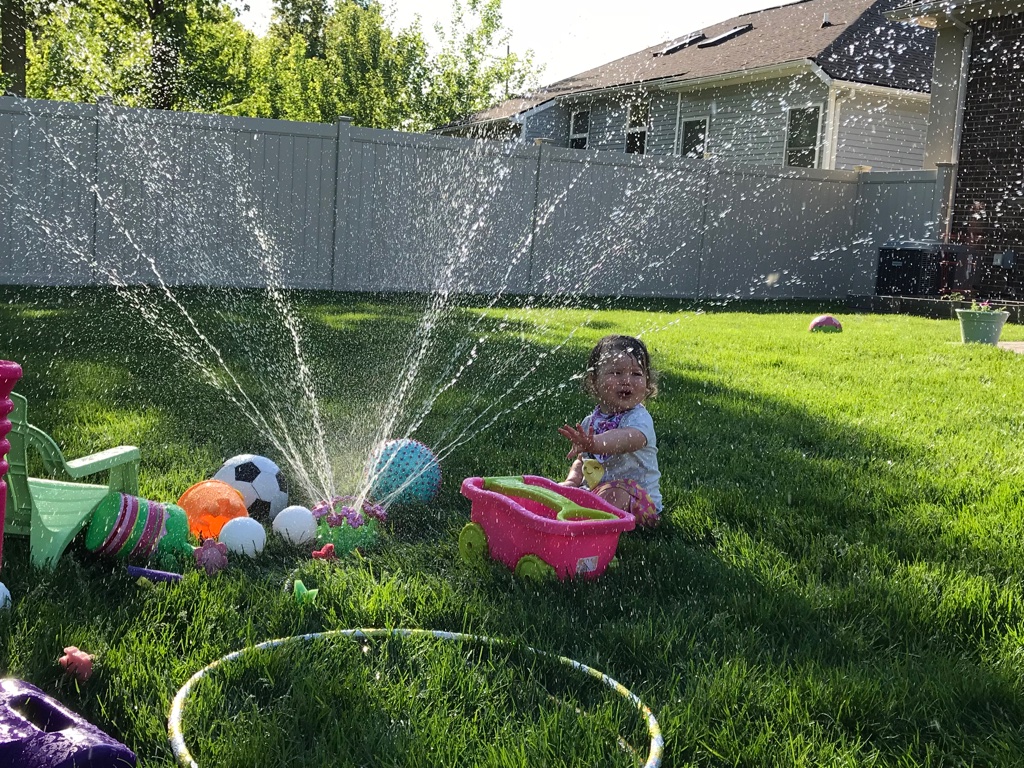 And finally, I know this is so silly, but it still made me laugh. Even a princess has #momproblems. 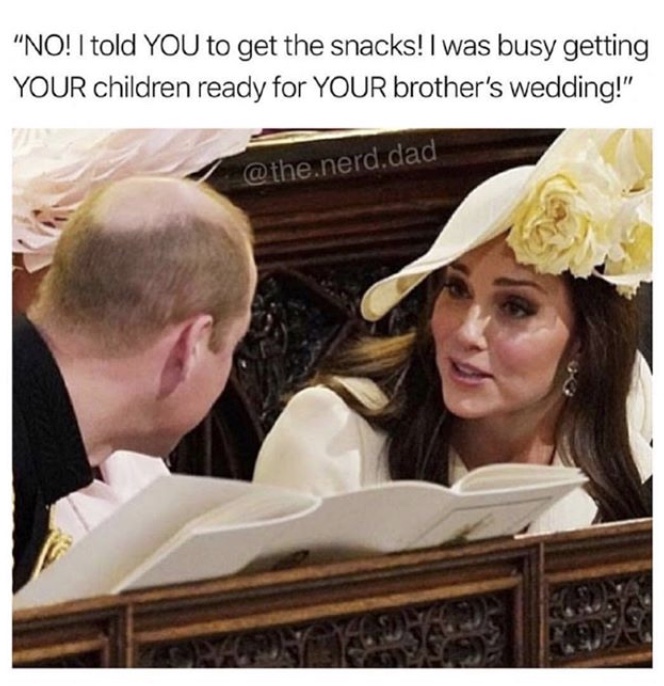 We are off to the cottage this morning and couldn’t be happier about all the warm weather in the forecast. I’ll most likely be off the grid until next Thursday, so have a great week.
Happy Memorial Day!
XOXO