This last week was a crazy one!
There’s been a manufacturing issue with a part at Matty’s work, and he worked late every single night last week. That is no fun for me and definitely no fun for him!
Lucy didn’t eat breakfast Tuesday morning, but I didn’t really think anything of it because she was acting ok. By the time she got home at lunch, she still didn’t want to eat anything and only wanted to snuggle. I took her temp and it was 102.7. Poor little thing. 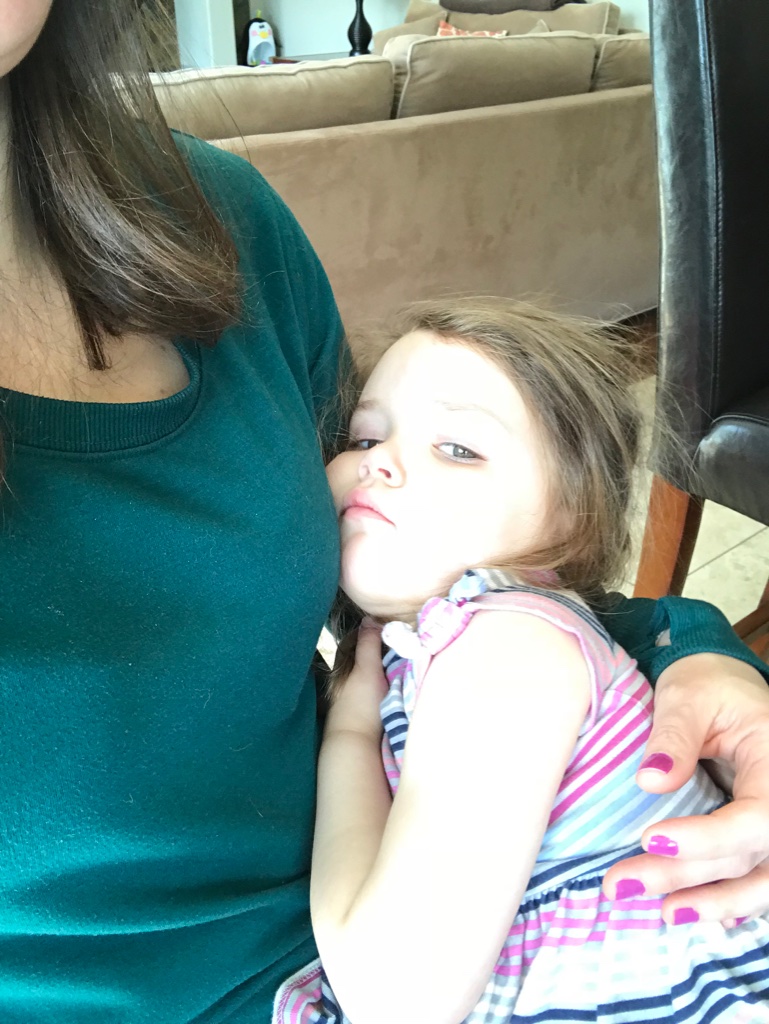 She didn’t move a muscle while watching Moana on the couch and then, believe it or not, she ASKED me to rock her to sleep! 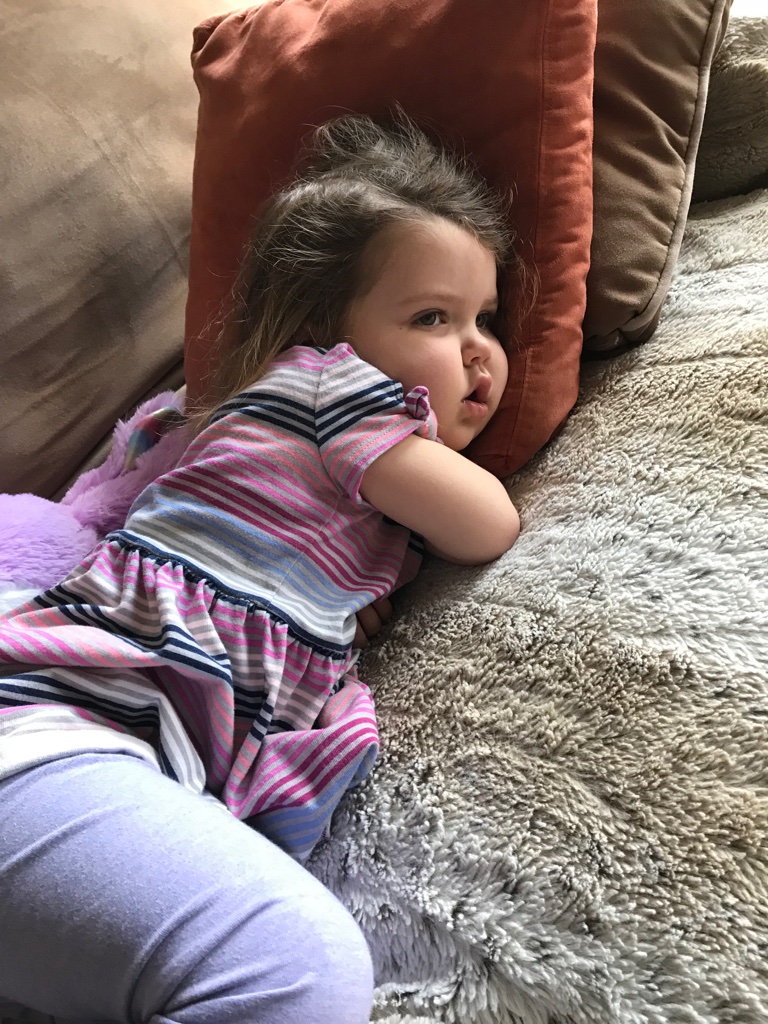 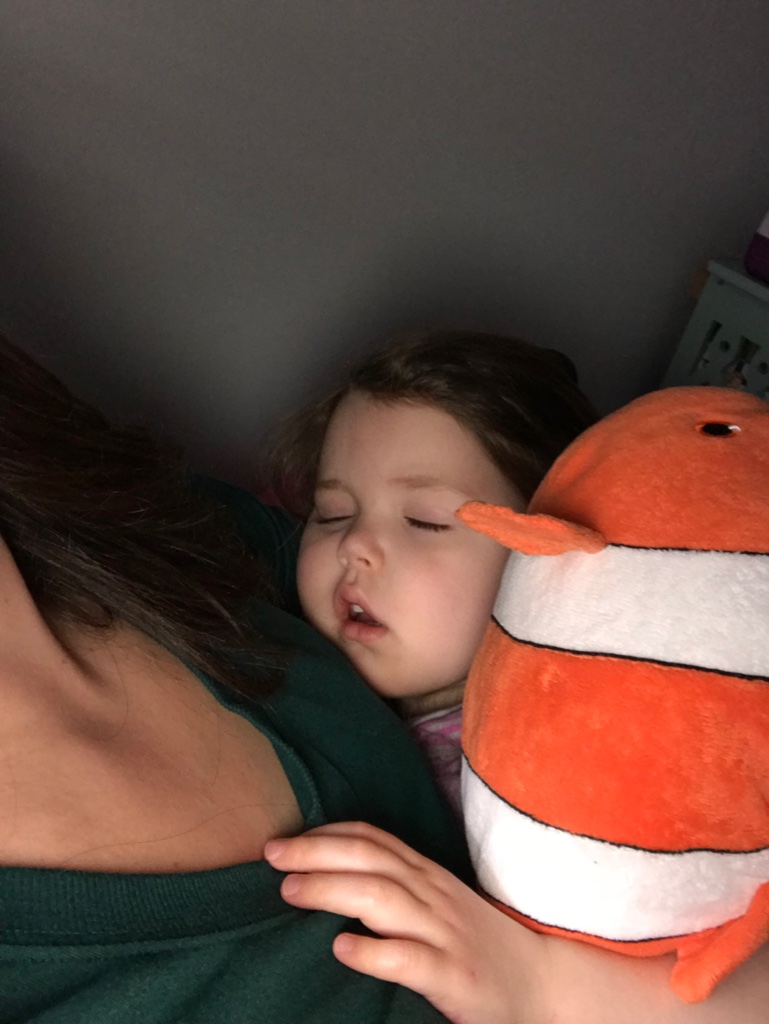 . . . and then slept for 90 minutes in her crib. Obviously, I didn’t like that she was sick, but I DID like that I had about an hour with both girls napping. #thatneverhappens #ever 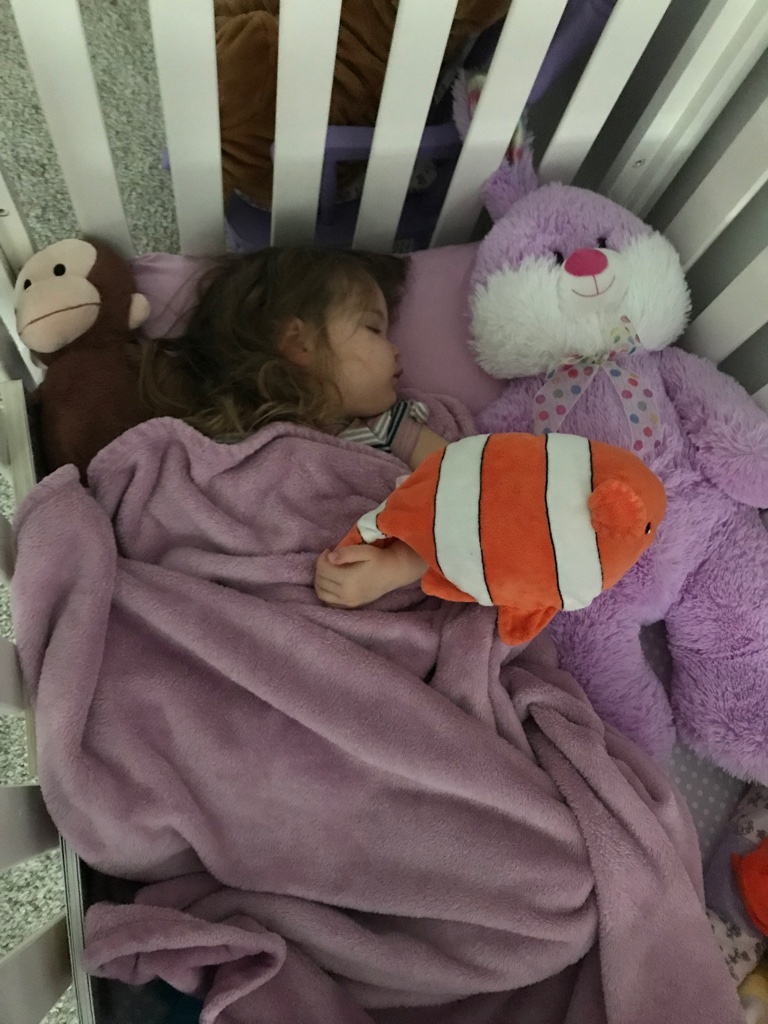 She had a fever and diarrhea on and off for about two and a half days. She was acting more like herself on the second day, but she still had a fever so we couldn’t go anywhere. That made for some looooong days at home this week. 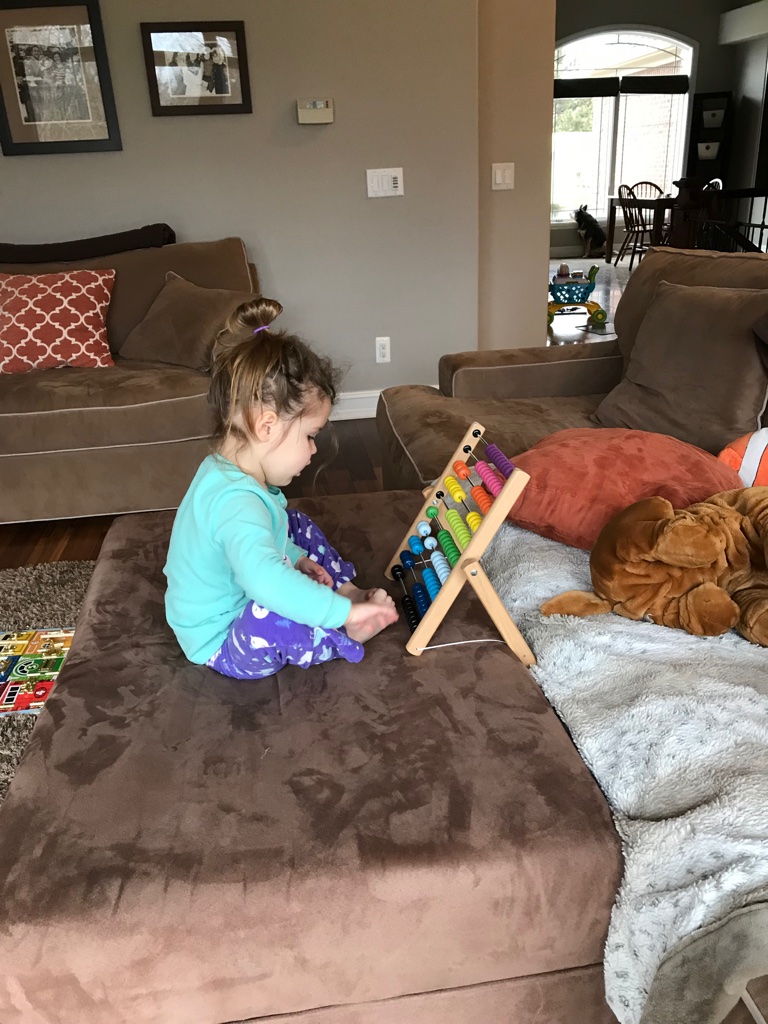 Thankfully, Emmy Roses didn’t get sick. She did, however, have a great time trying to feed herself yogurt for the first time. Who needs a spoon when you have your finger?! 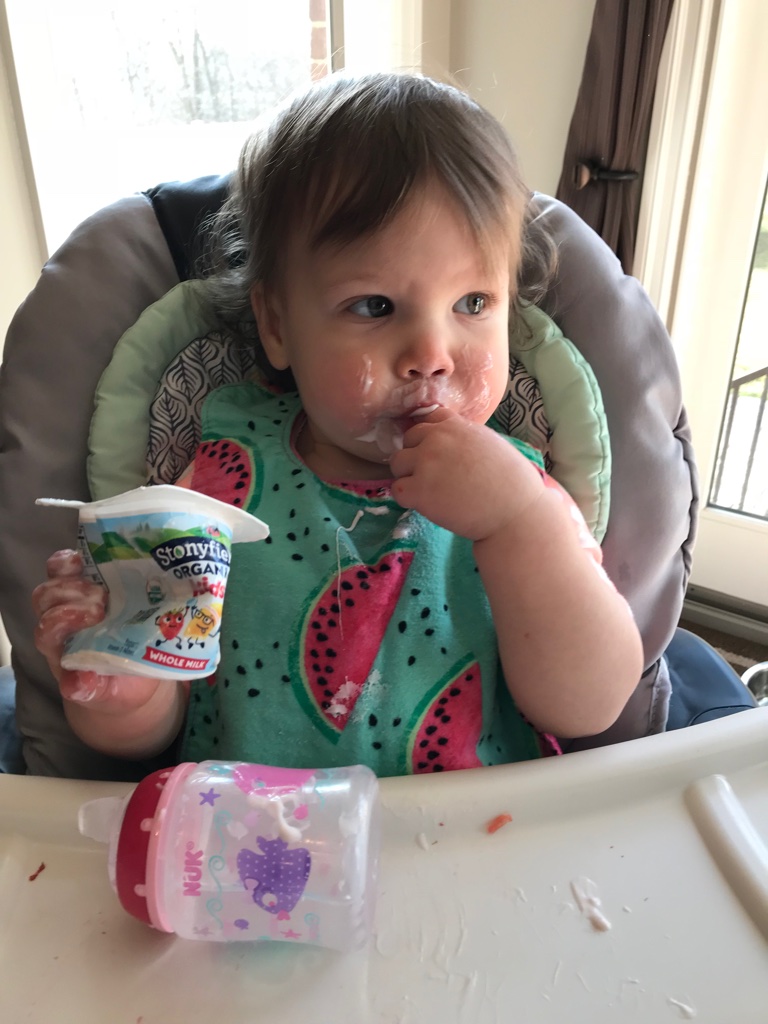 The weather on Thursday was gorgeous, and we got out and enjoyed some much needed fresh air. 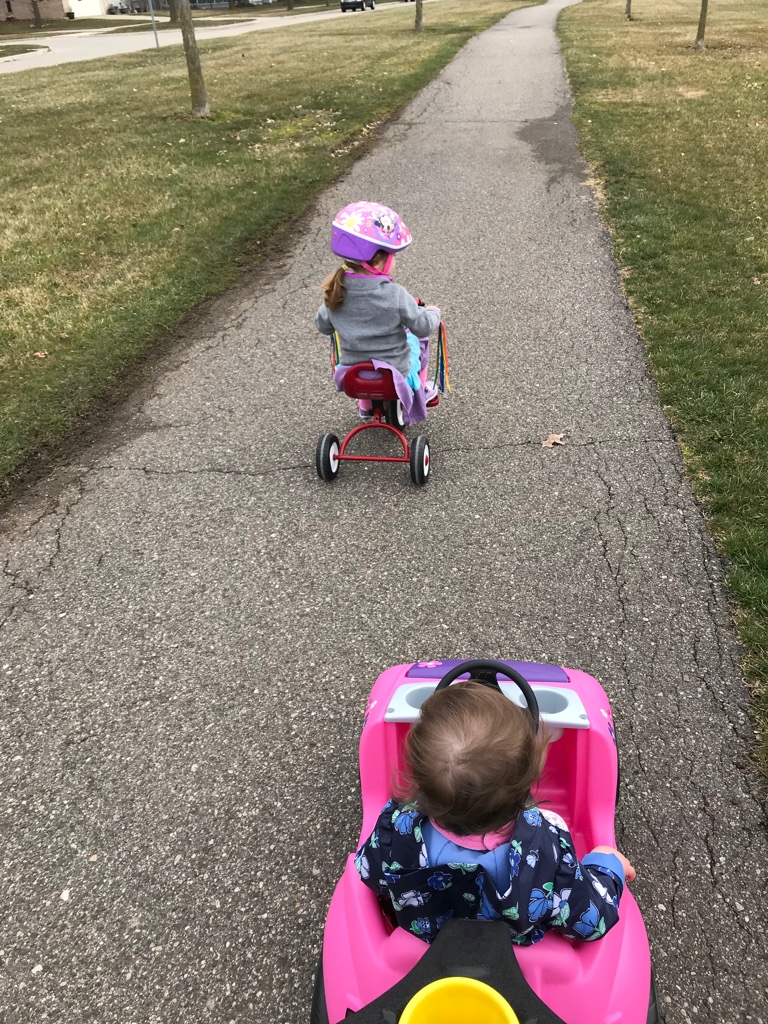 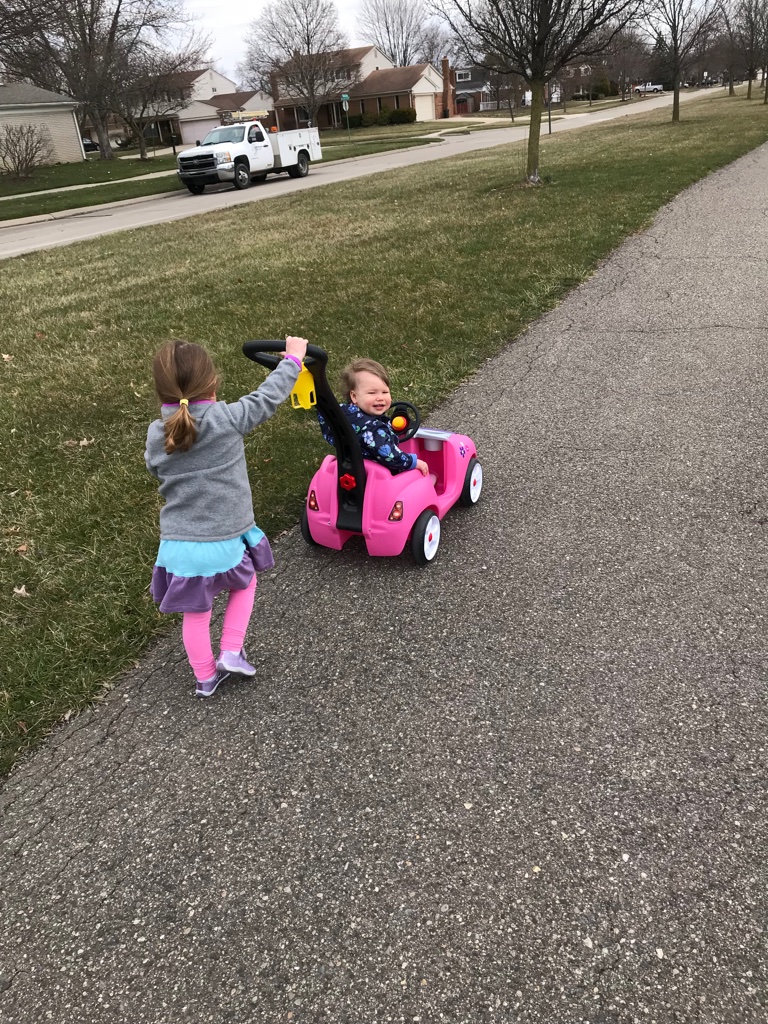 The girls are good about making sure that Sydney keeps up with her shots. 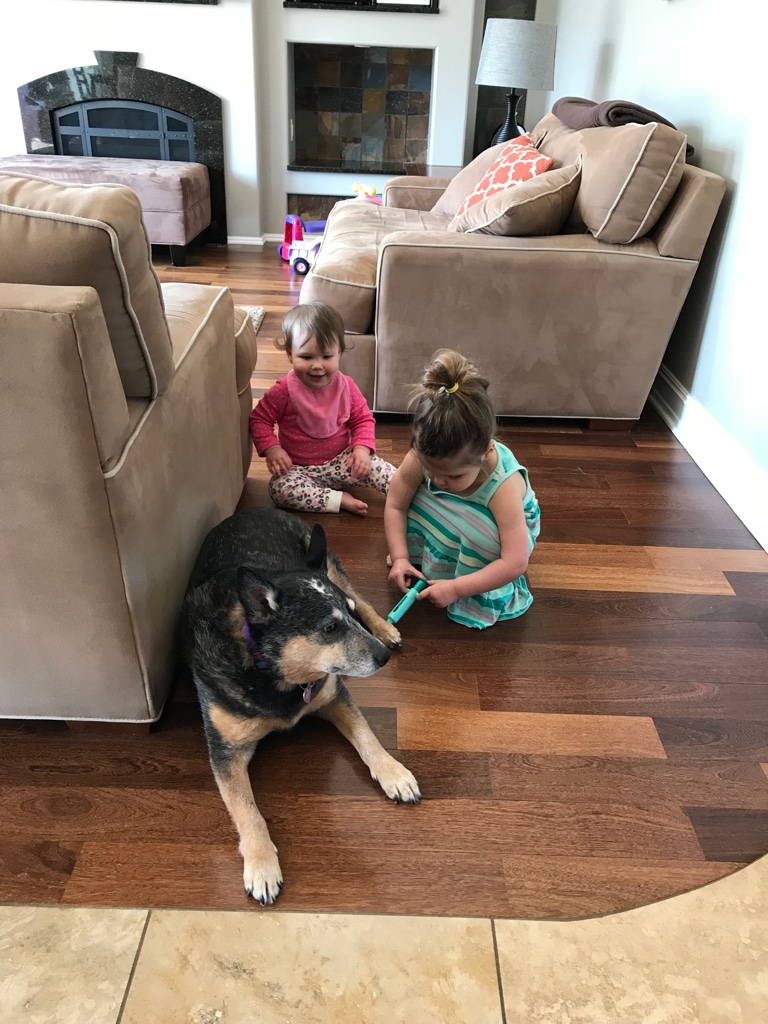 It’s all fun and games until the hair pulling starts. 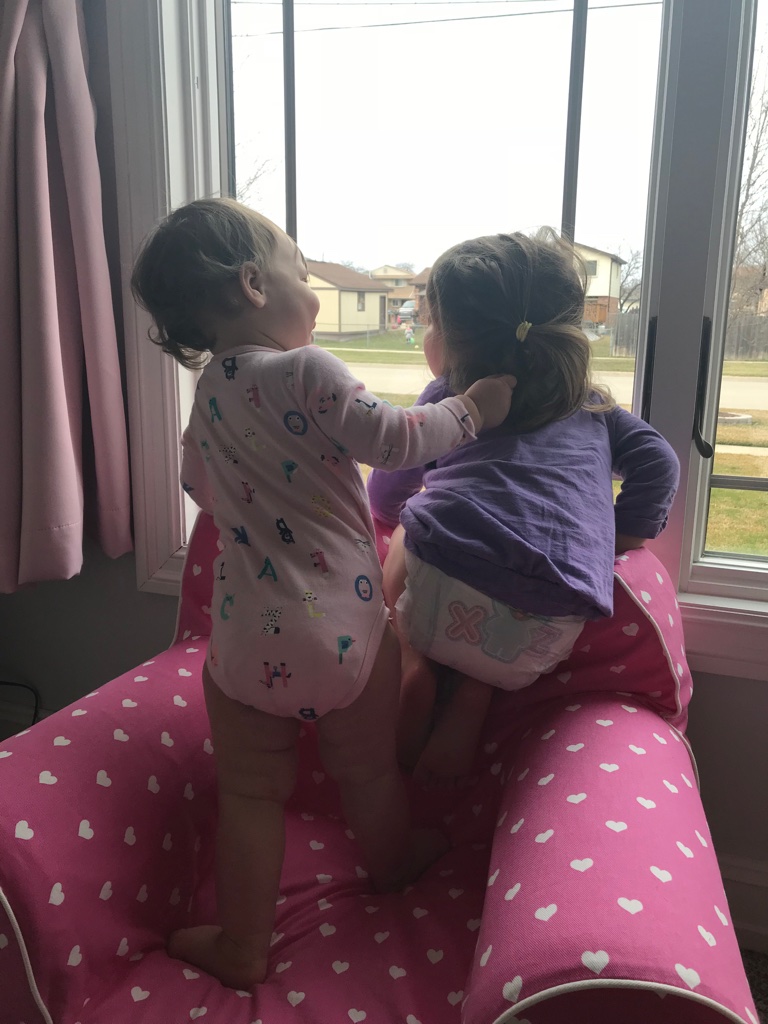 This girl loves her pasta . . . and went directly from her high chair to the bathtub! 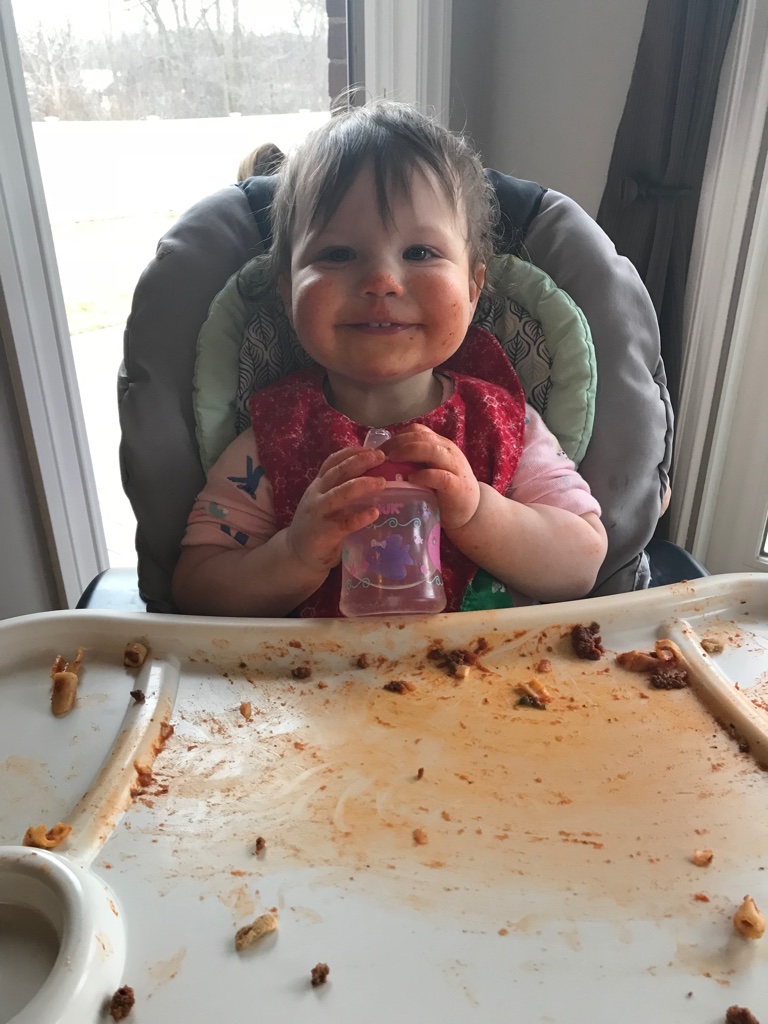 Emmy has entered the stage where she pulls everything out of the cupboards. It’s super fun, and not messy at all. 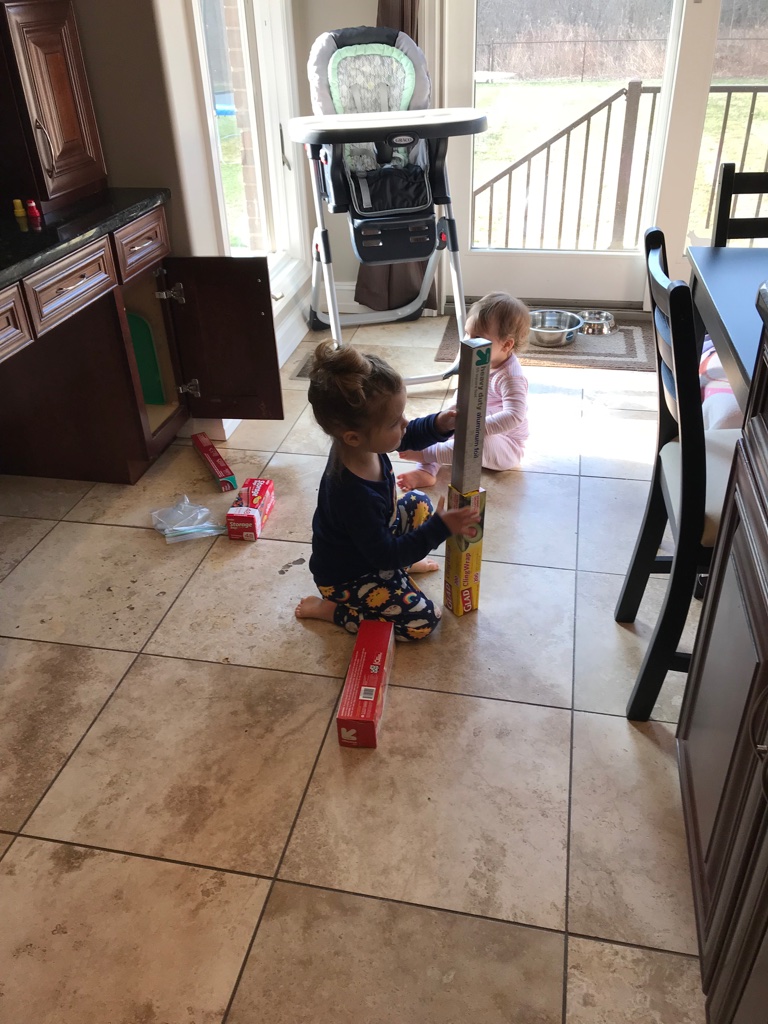 And on Saturday morning, if Emmy wasn’t dumping out entire bags of straws . . . 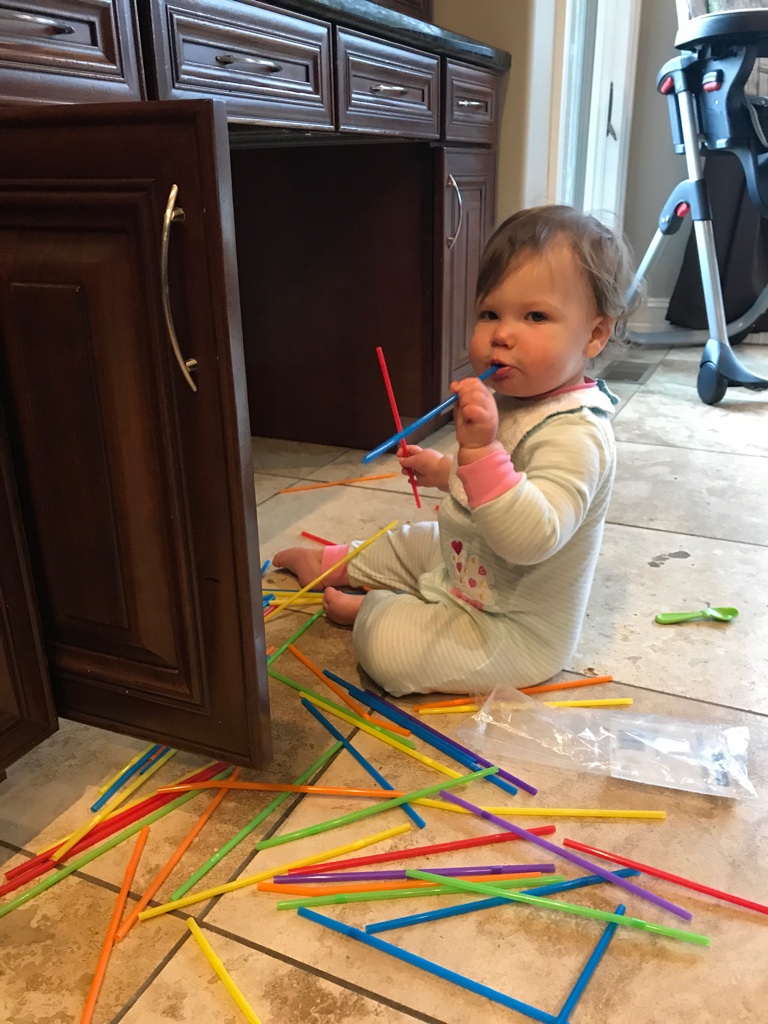 . . . then she was crawling into the dog bed every chance she got. #gross 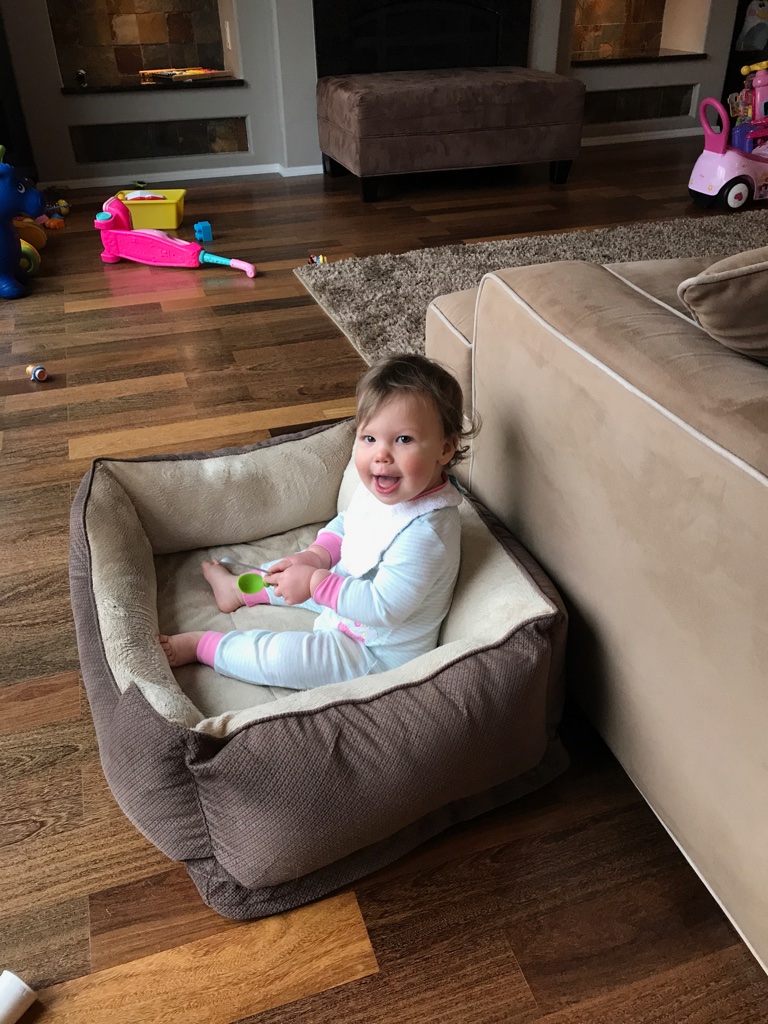 We toured a model home on Saturday morning. Emmy loved climbing up the stairs . . . 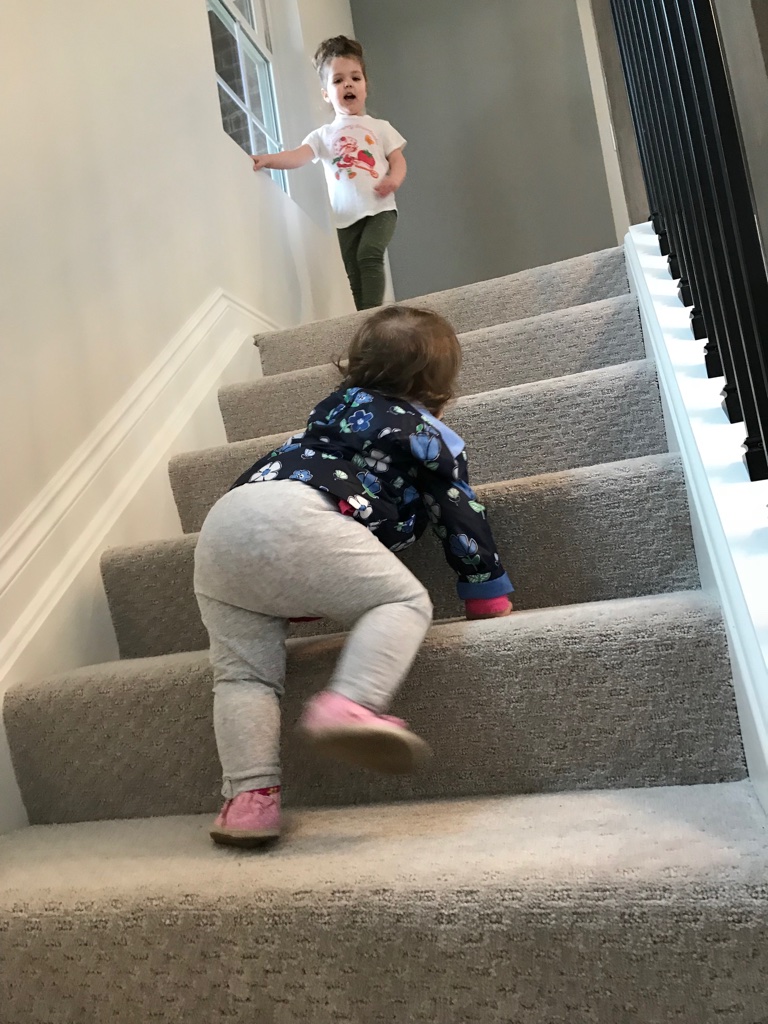 . . . and Lucy and I had the same reaction upon finding out there are two closets in the master bathroom! Are we moving? Are we staying? It’s the never ending question here at the Kissel house . . . and it still hasn’t been answered. 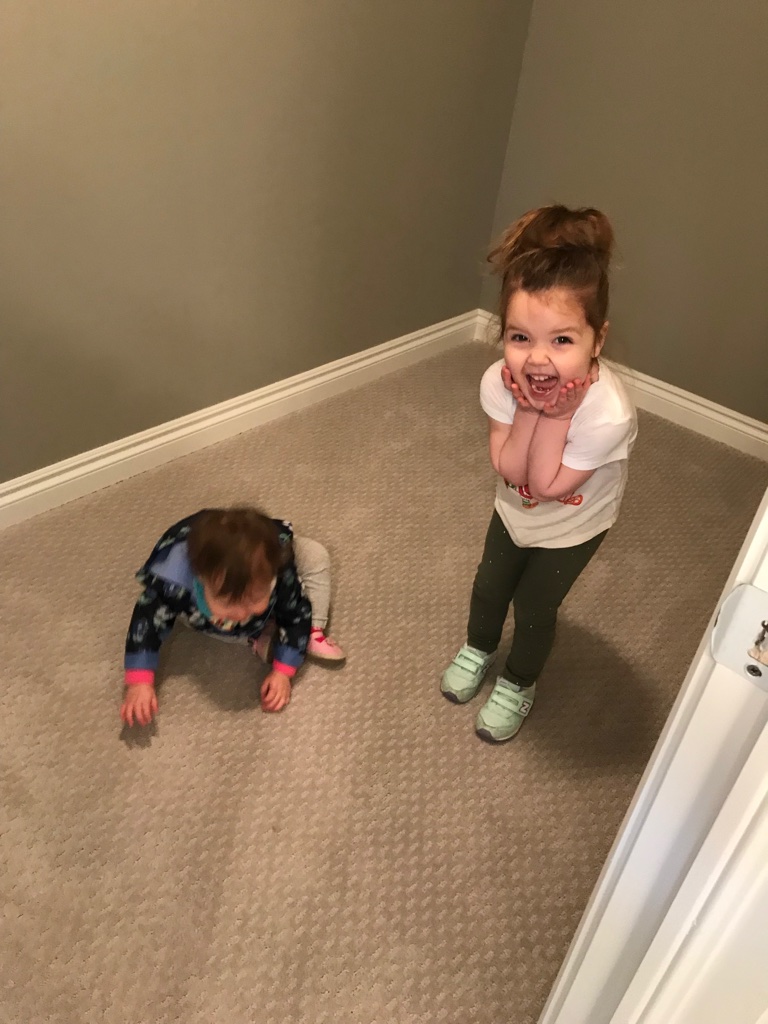 The Heinbuchs bought the girls sparkly, sequined Minnie Mouse ears when they were at Disney World over spring break. They are the cutest things ever, and I can’t wait until they girls can take them to Disney and meet Minnie someday! 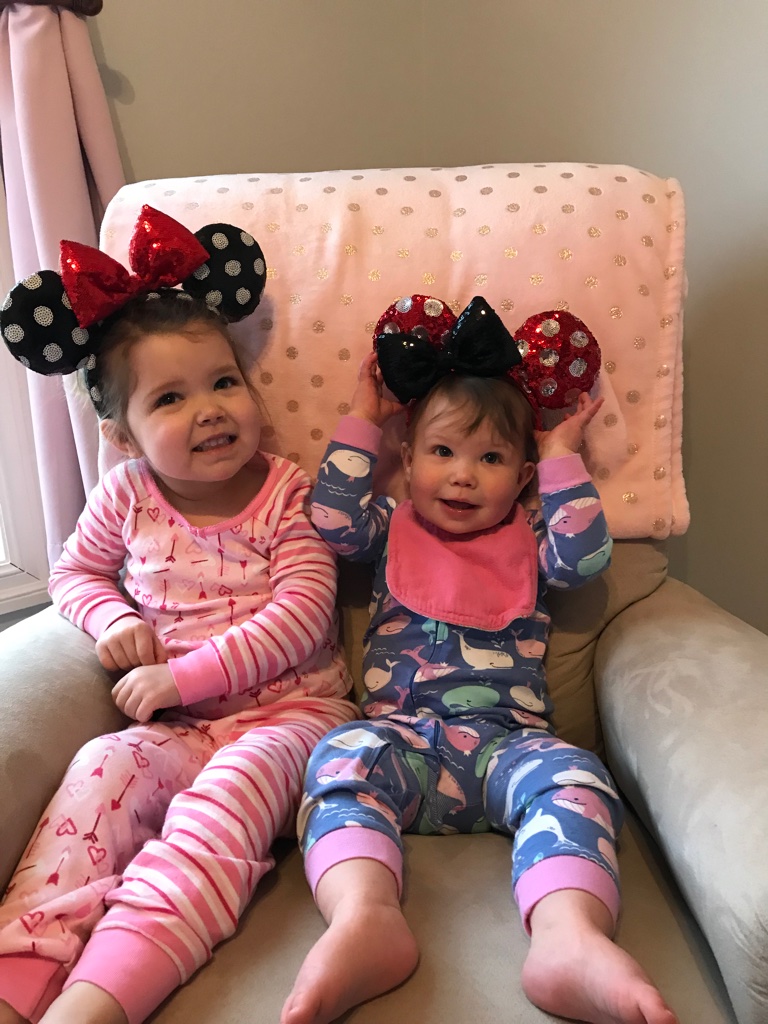 The screws in Lucy’s tower needed a little tightening, and Lucy was happy to help Matty out. 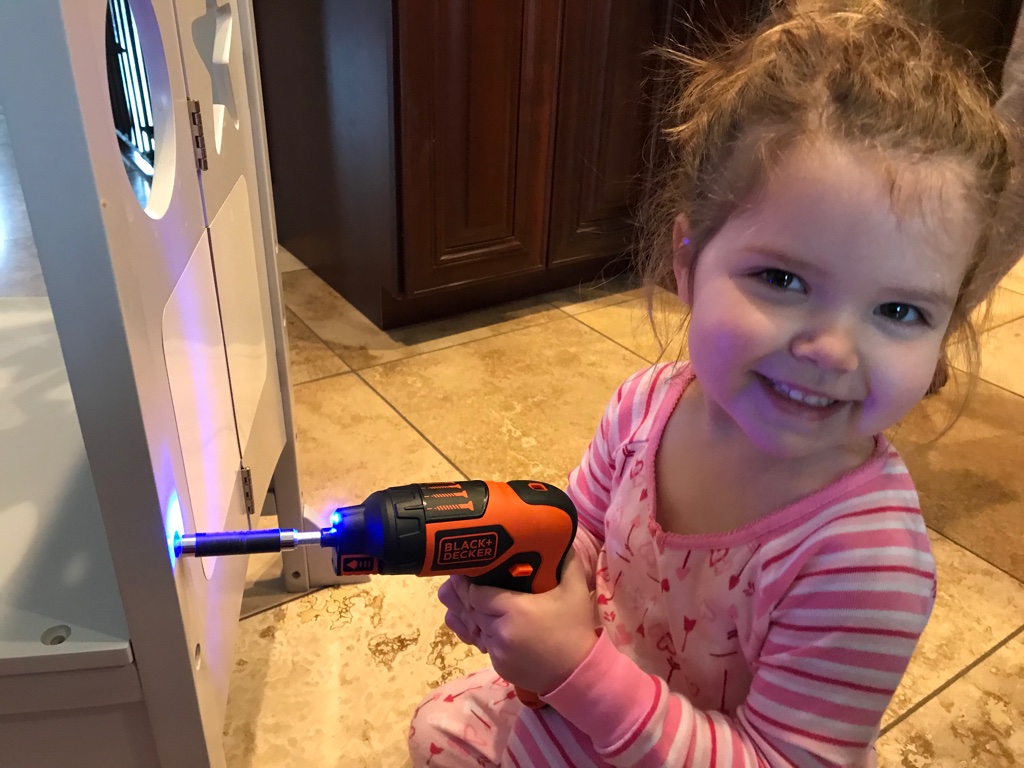 We hit the jackpot at Kroger as far as shopping carts go. The girls did a great job sitting side by side. Except for when Lucy was trying to grab Emmy’s snack cup full of Cheerios and the lid popped off and the Cheerios flew all over the floor. Right in front of the milk cooler . . . one of the busiest areas! Picture me on my hands and knees trying to scoop up Cheerios while Lucy keeps trying to get out to help and Emmy is leaning over the cart whining because she still wants to eat the Cheerios. Never a dull moment! 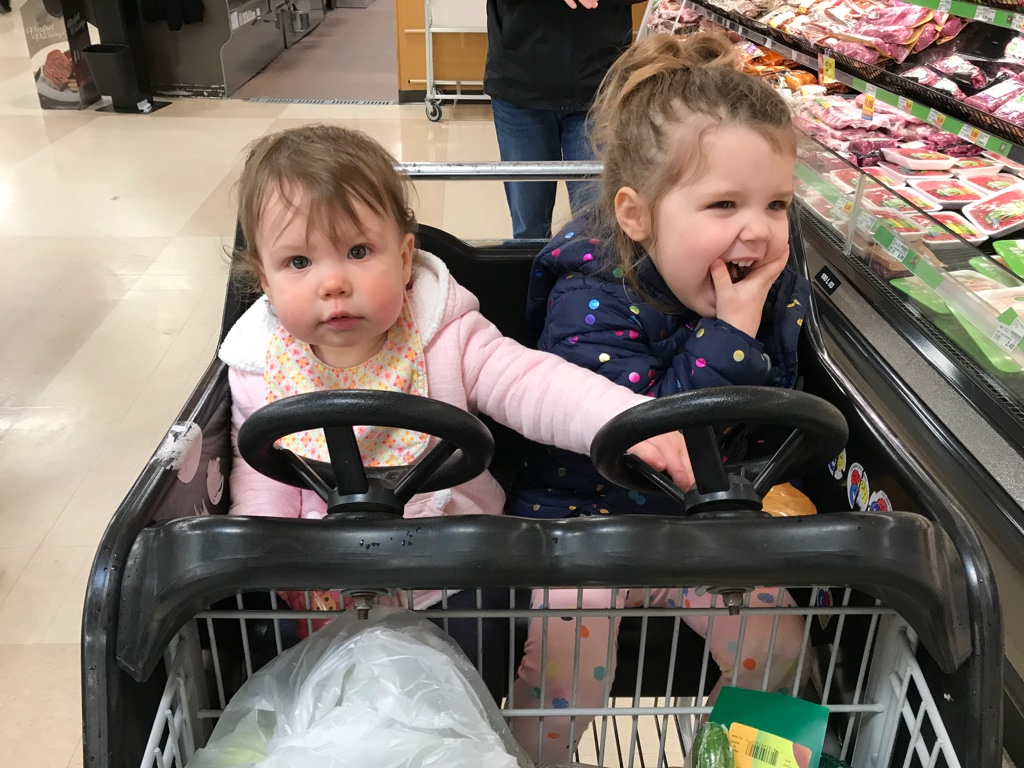 And that’s all she wrote.
I’m looking forward to getting out of the house more this week. Now that Emmy is down to just one long afternoon nap, I’m going to attempt to take both girls to story time at the library on Monday. Wish me luck!
Have a great week!
XOXO