This is not the post I planned to write for today.
Our weekend did not turn out as planned because on Saturday morning we took both dogs to the vet for exams, and only came home with one. Poor Snort had been declining for quite some time now, and the vet said it was obvious that he was in quite a bit of pain. He was fourteen years old, and she said it was time to think about putting him down. There was no way we could bring him home knowing he was in so much pain, so we decided to go ahead and do it on Saturday. We know it was the right decision, but it was still very sad and very hard.
So today’s post is all about our sweet Snort dog. 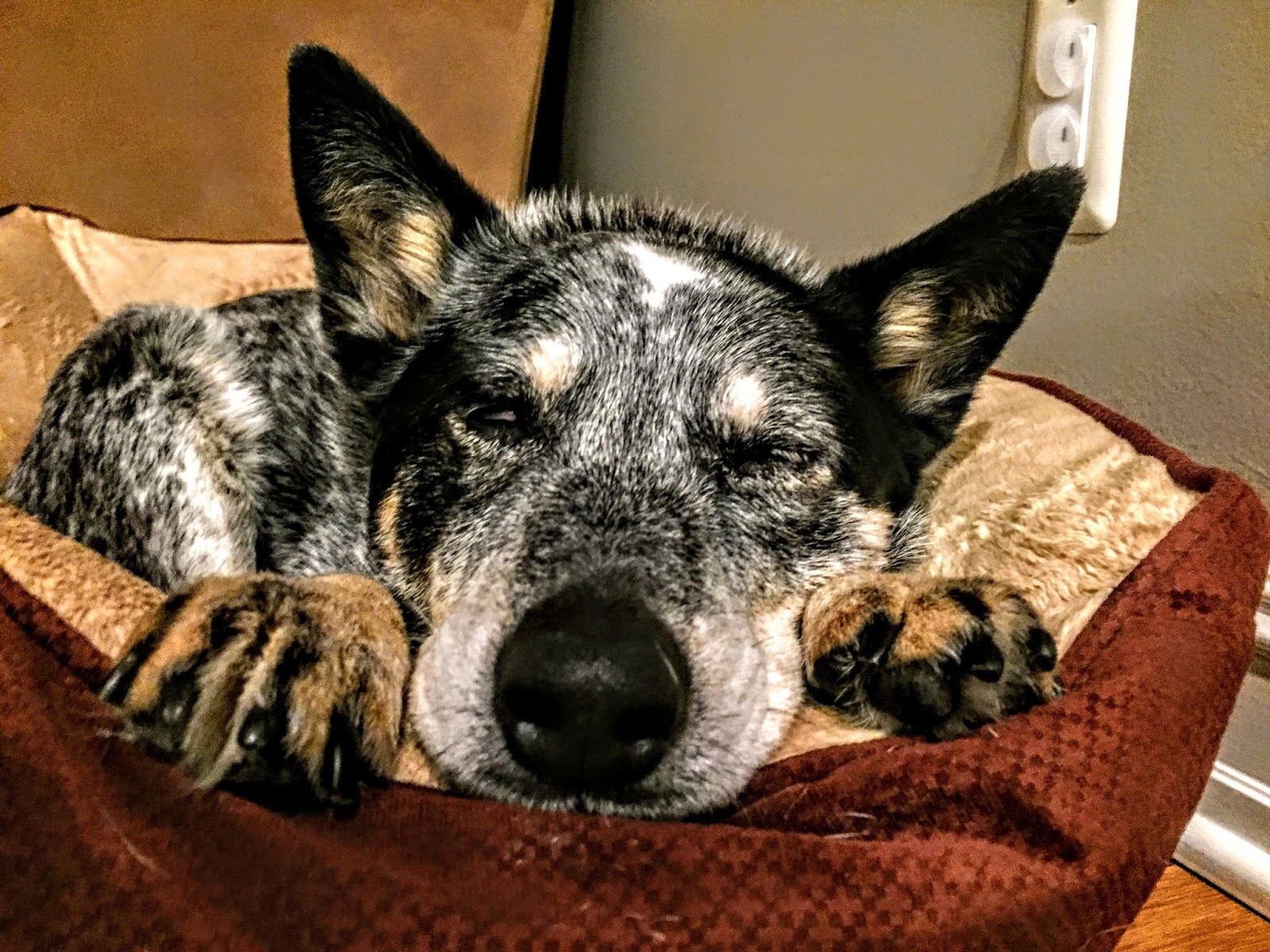 ~~~~
Snort started out as Matty’s Aunt Becky’s dog. She lived around the lake from our cottage up north and found Snort walking around as a stray. She put up signs, but no one claimed him, so she kept him and gave him the name Snort. She also had a cat named Plop. Perhaps naming pets was not her strongest skill. 😉
The first time I saw Snort, he jumped out of Aunt Becky’s car and started racing around the front yard at the cottage, and I was actually a little leery of him because he looked a little mean to me. I couldn’t have been more wrong. He was sweet, cuddly, loyal, and listened so well. Matt immediately loved him, and every time we went to the cottage we’d either drive over to pick Snort up or Aunt Becky would let him out and Snort would run across the road to the dock and we’d pick him up by boat.
Sadly, Aunt Becky passed away soon after Matty and I got married and moved to South Korea. Matt’s parents took Snort until we moved back home. The night our plane landed, we picked up Snort and he was ours for the next twelve years. 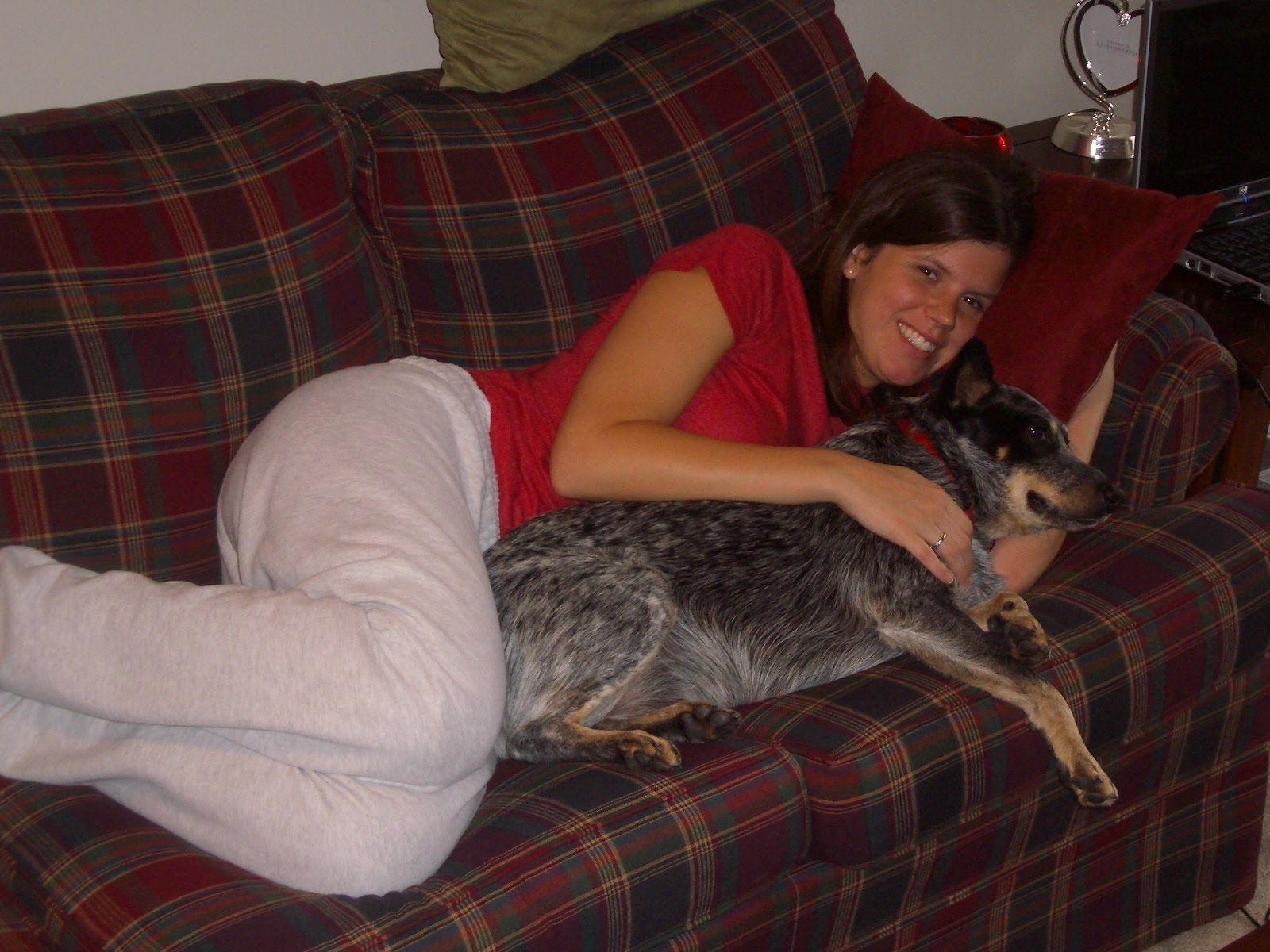 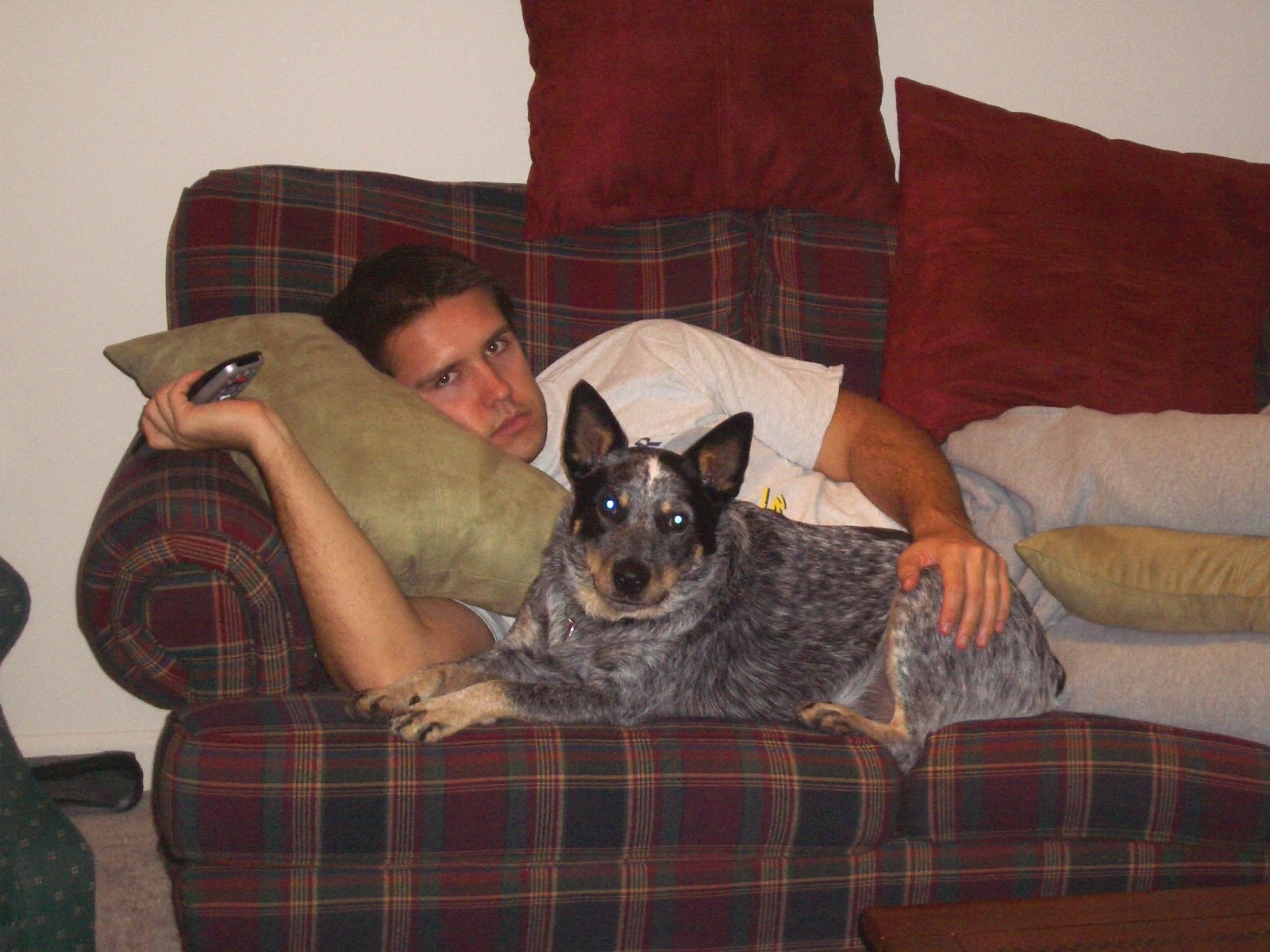 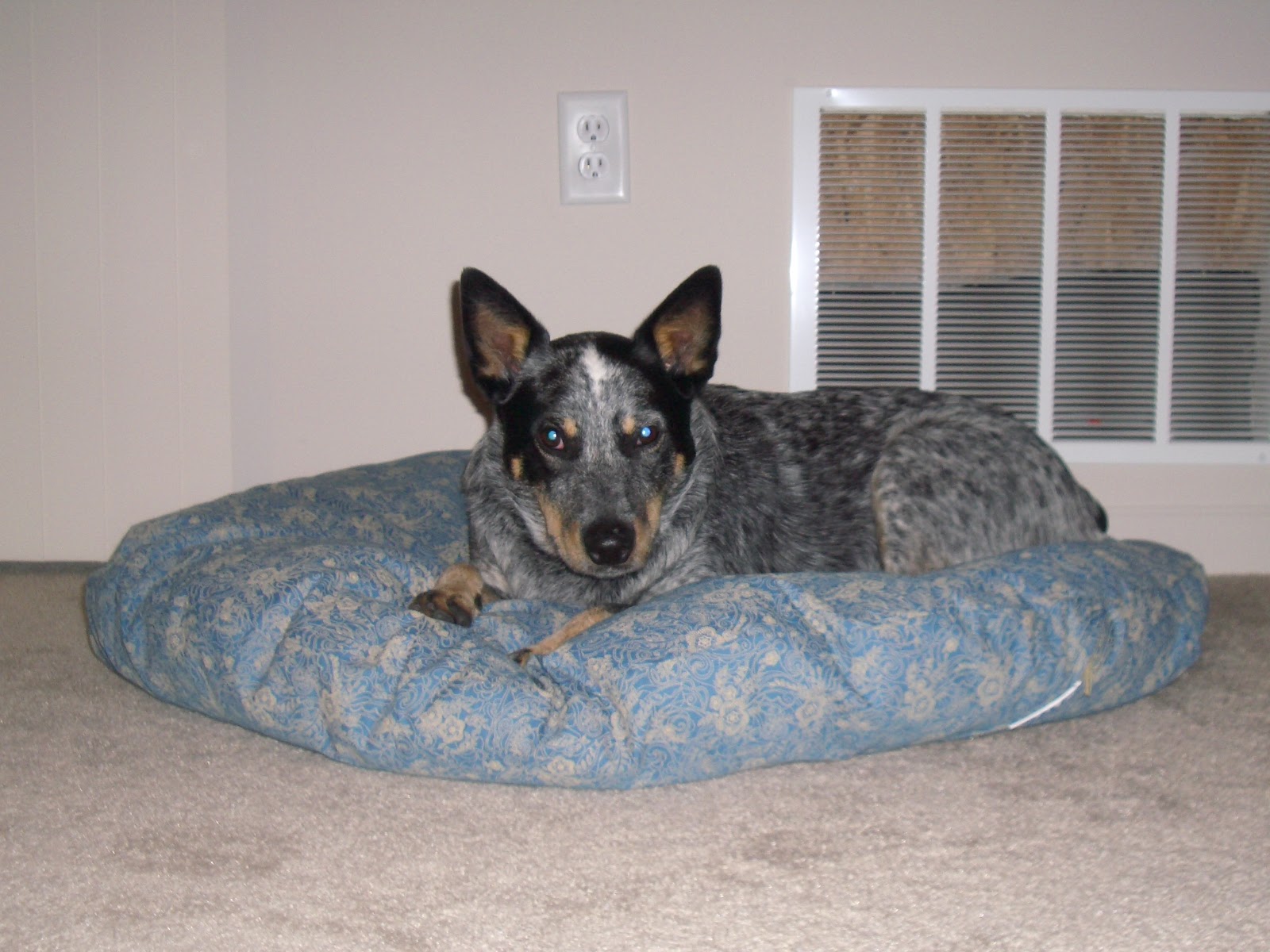 He really was the best dog. He didn’t need a leash because he wouldn’t dream of running away from us. We were able to teach him to sit, stay, roll over, and give high fives. And, most importantly, he LIVED for chasing the ball or the frisbee. . . on land or off the dock or boat into the water. 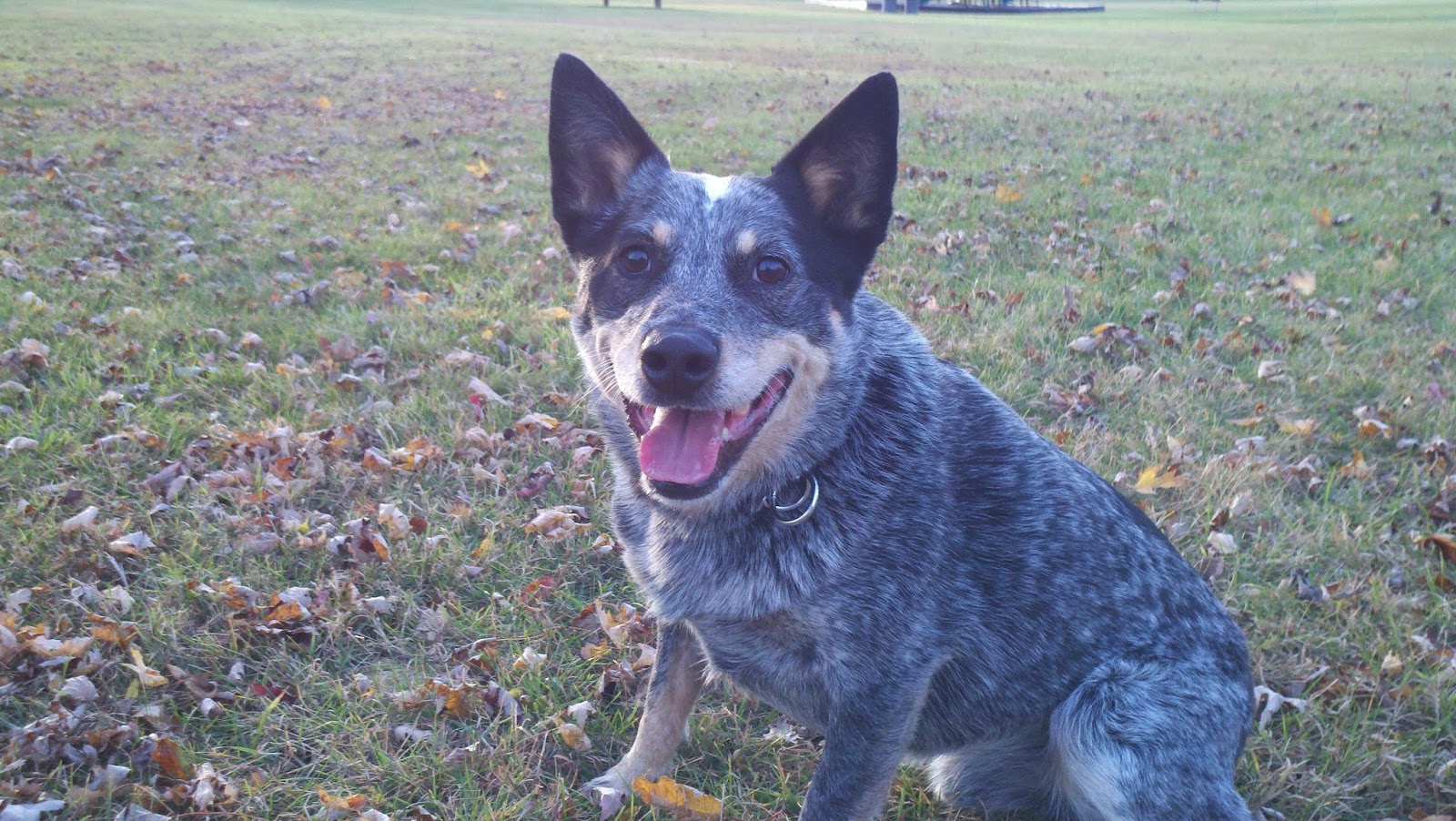 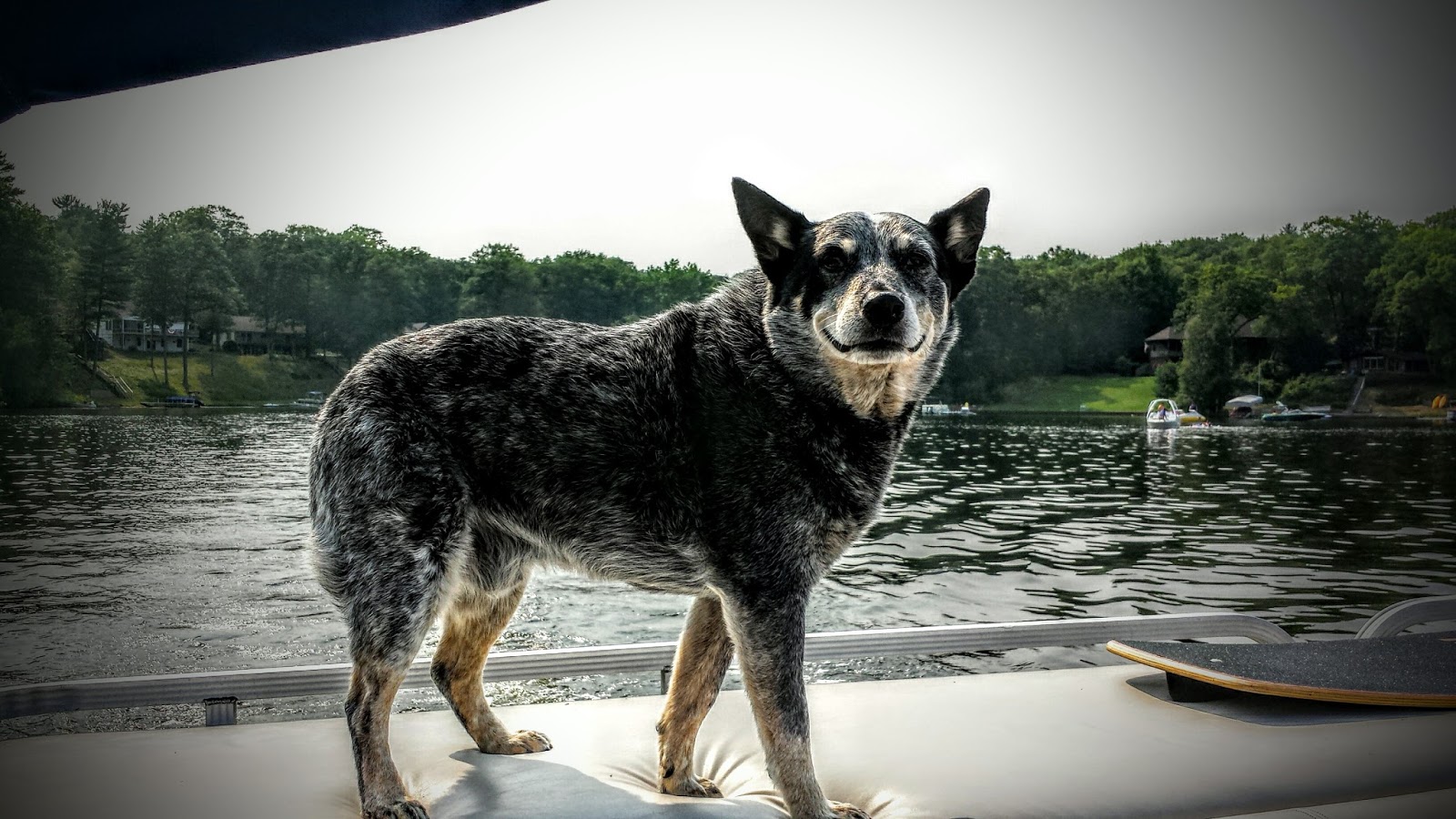 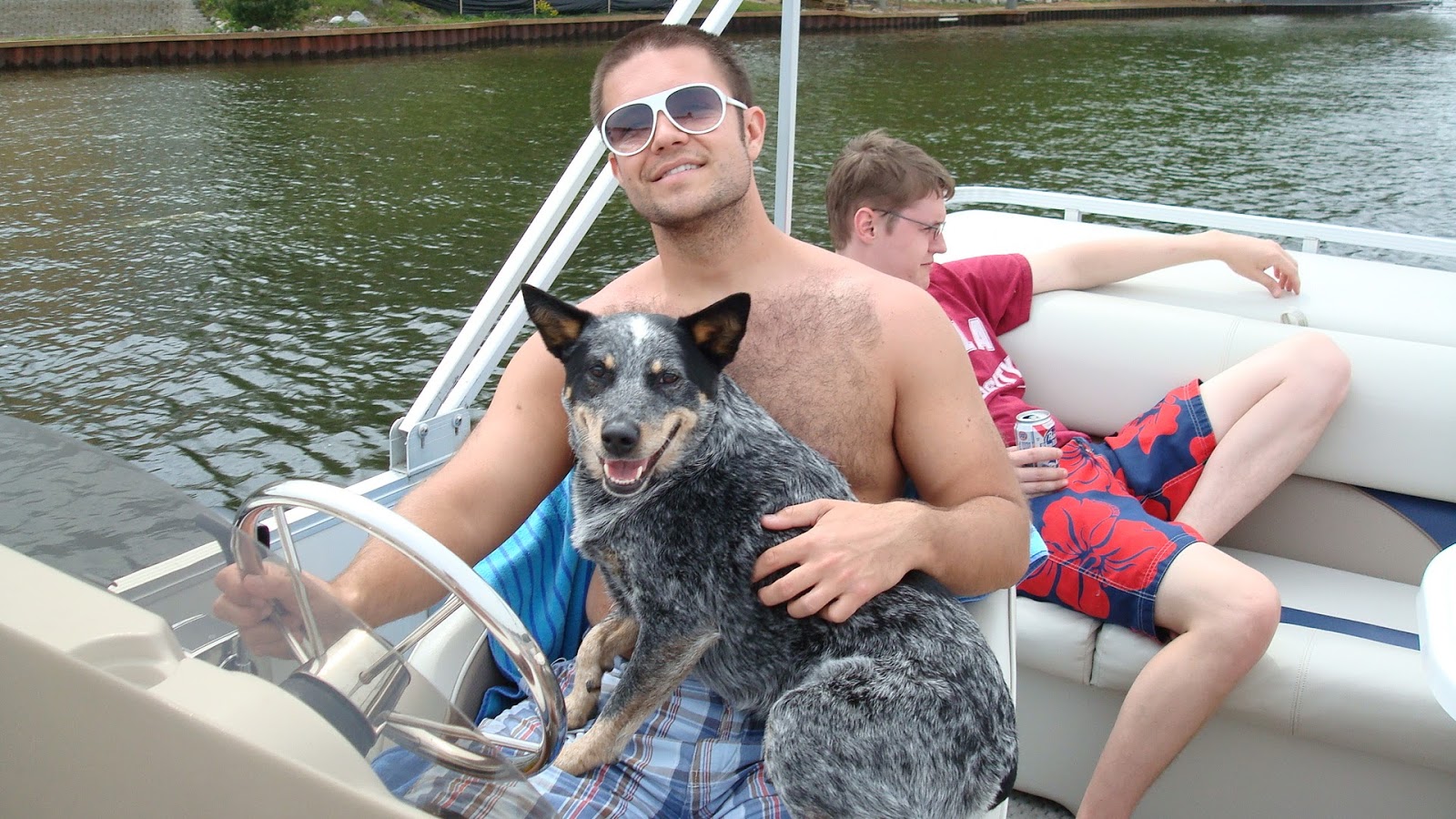 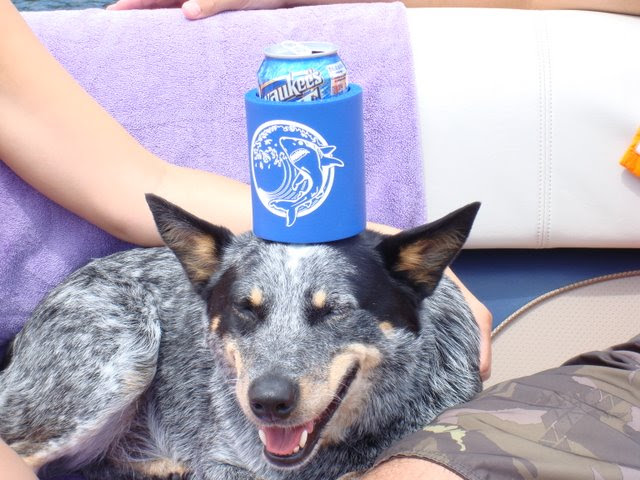 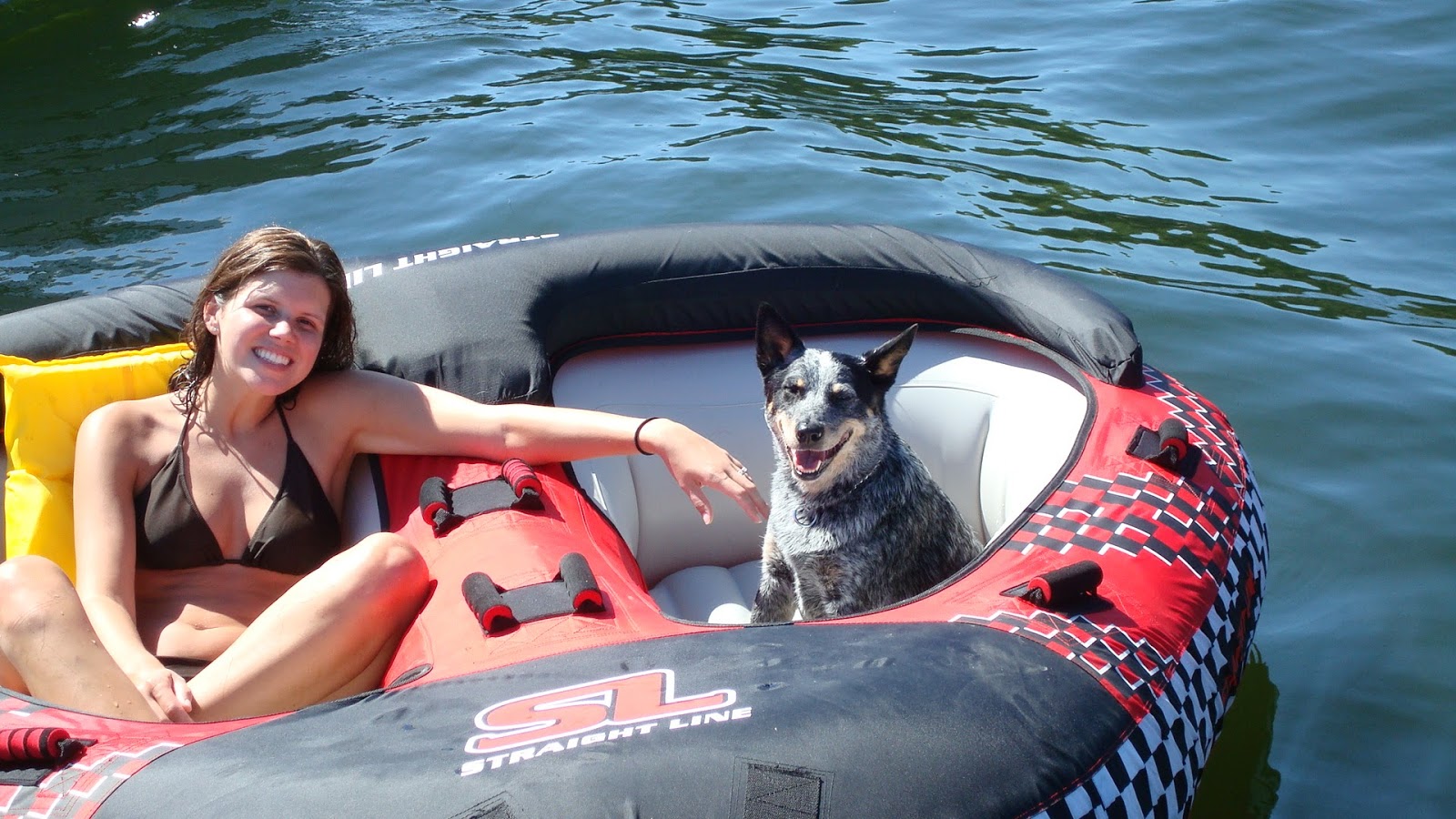 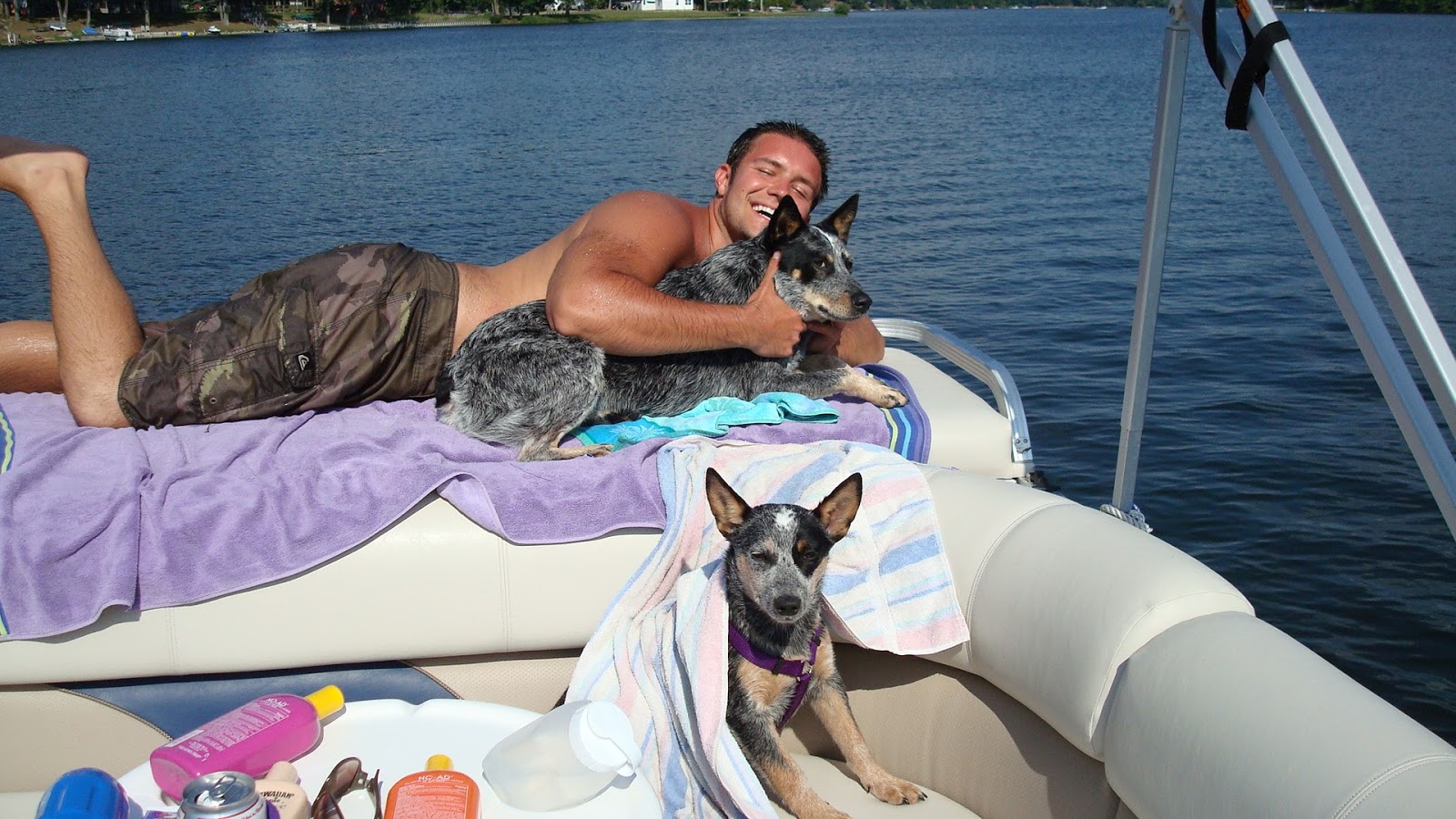 Snort went everywhere with us. If we went to the grocery or the gym, he’d happily hop in the car and wait there while we were inside. One time, we left him in the car with a leftover container of ribs while we ran into Target. It turns out that even our amazing Snort couldn’t resist the aroma of ribs, and we came back to a car covered in BBQ sauce! 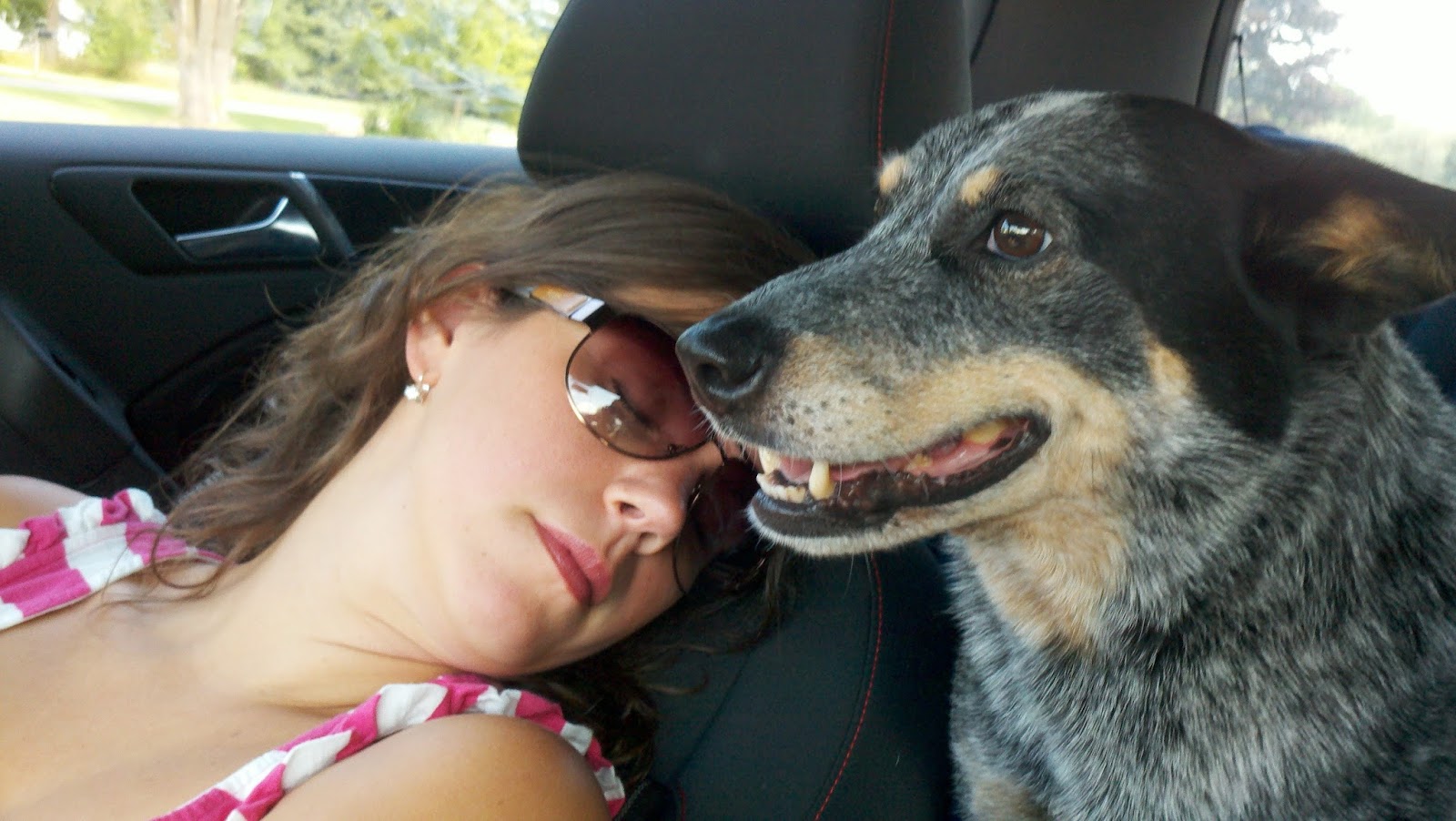 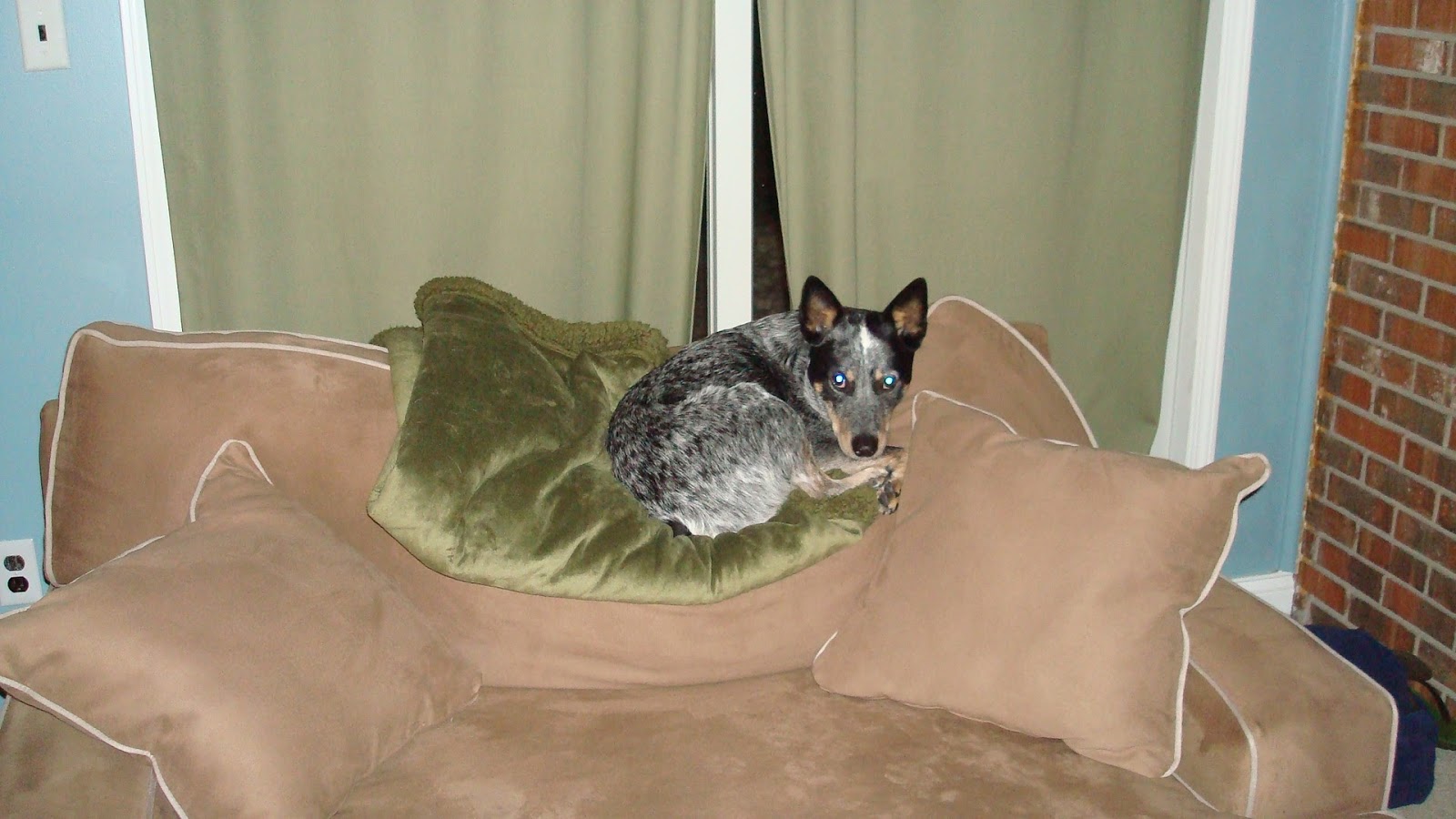 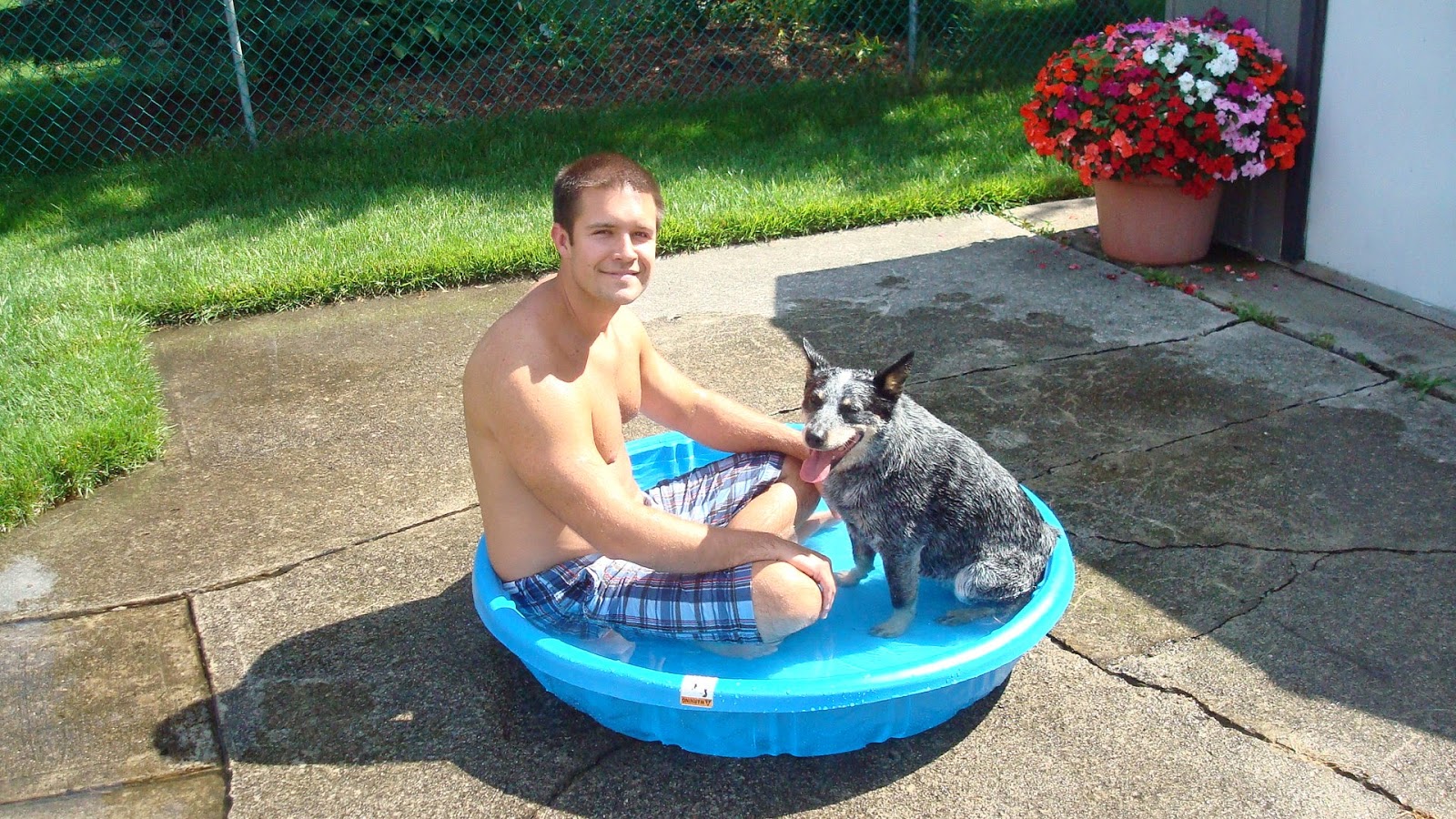 When we moved into our first house, we had an electrician over during the day to install some ceiling fans while we were at work. When I checked in with him, he said everything was going great except that he’d left his McDonald’s breakfast sandwich on the table and Snort ate it!
And then there was the time when I baked peanut butter cookies and left them in a glass cake dish on the middle of our kitchen table. When I got home from work the cake dish was teetering on the edge of the table, and every last cookie was gone! 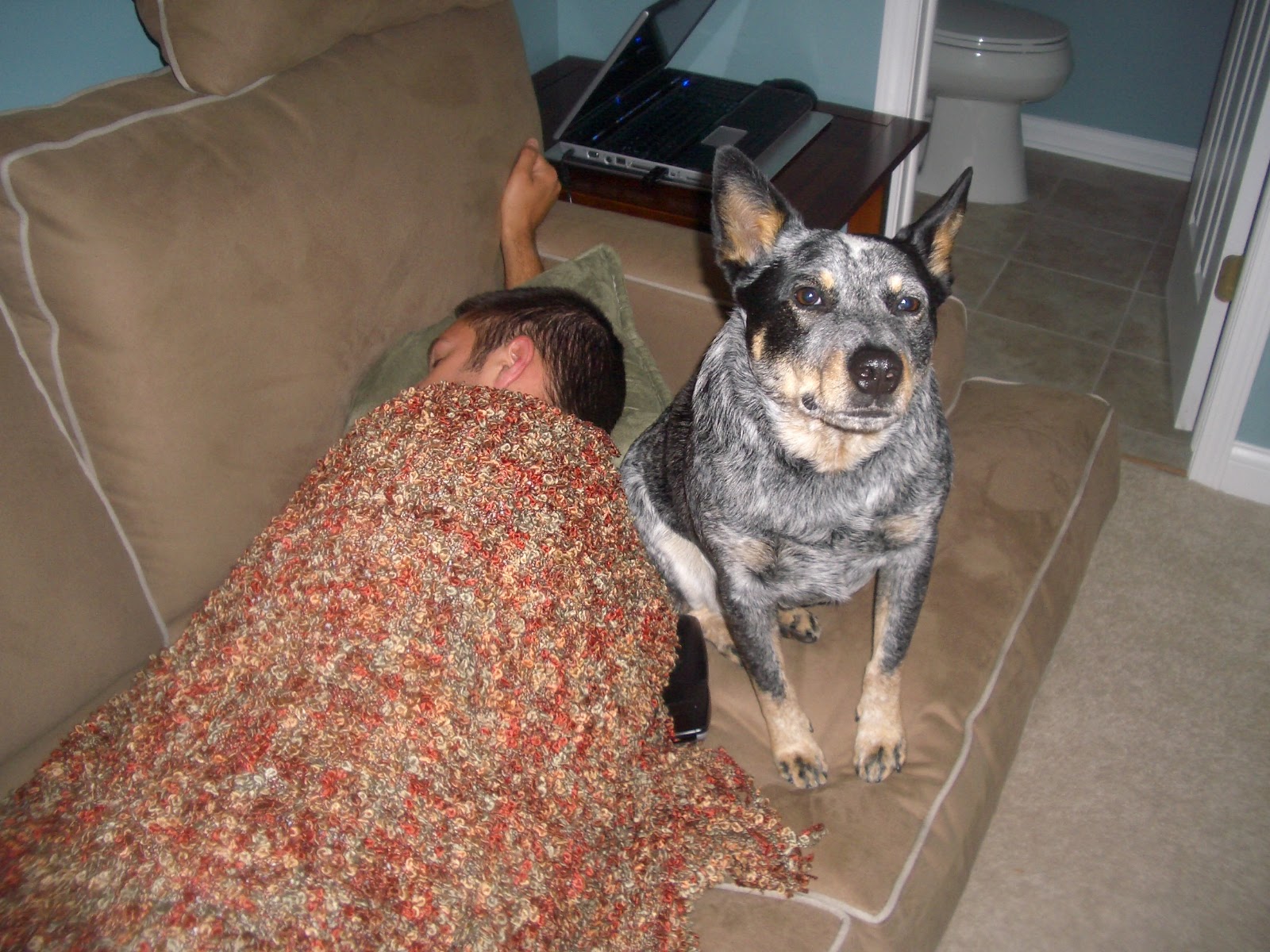 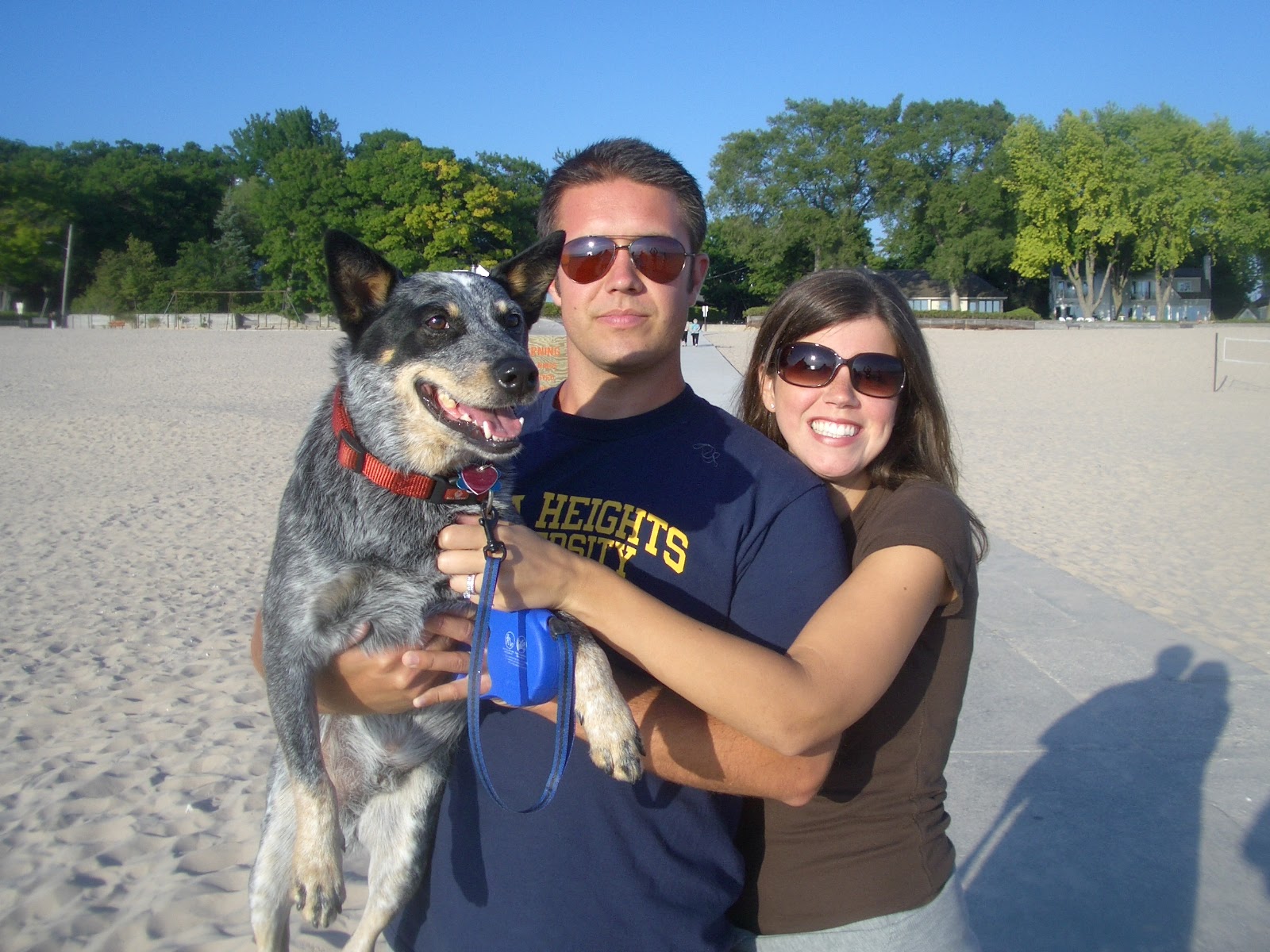 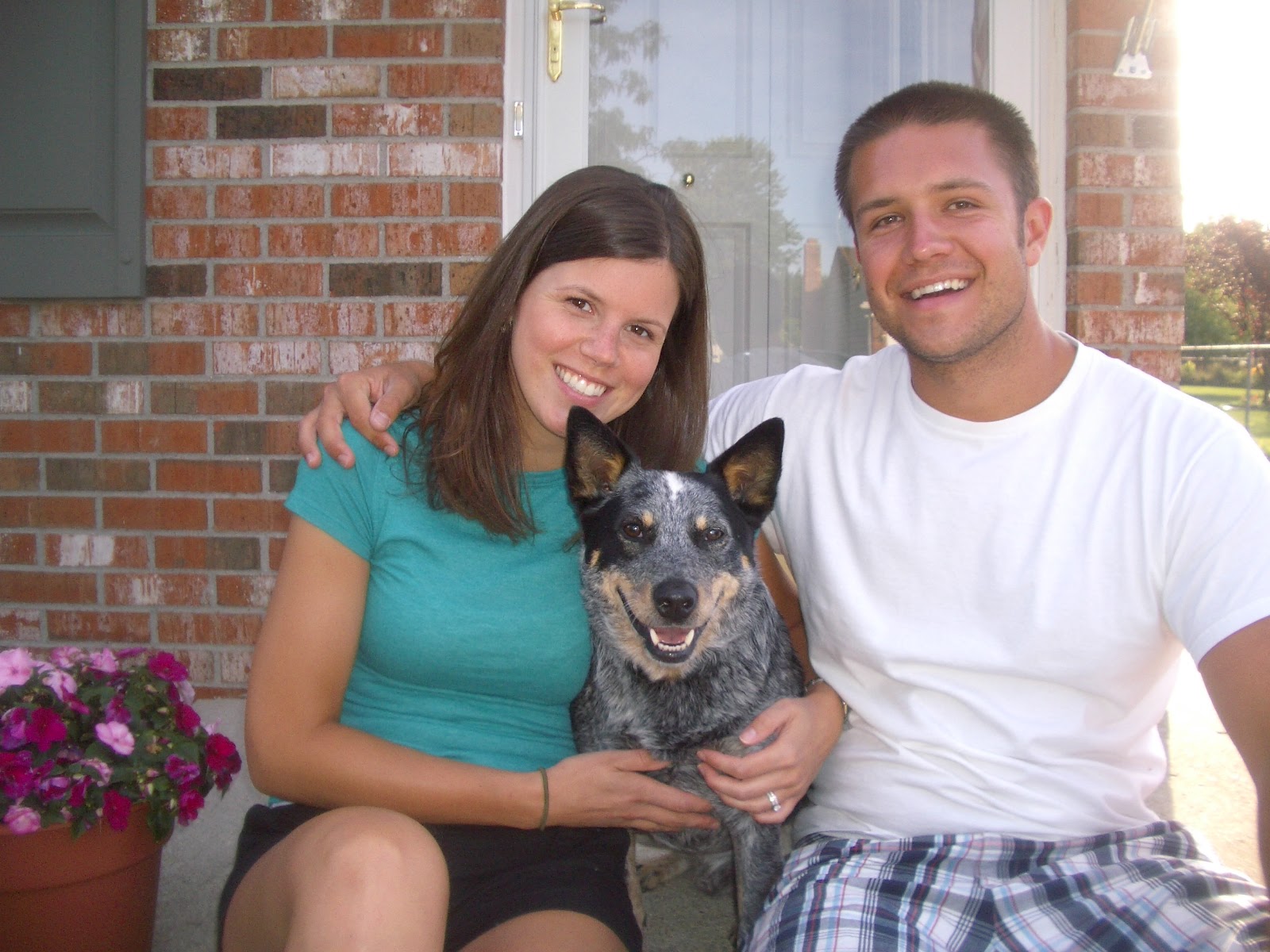 Snort was so amazing that we decided we should get him another cattle dog buddy since he was alone all day long while we went to work. We got Sydney about six months after getting Snort. It turns out that all Australian Cattle Dogs are not created equal. Snort set the bar a little too high, and Sydney has never lived up to it. Don’t get me wrong, Syd has her good qualities, but she just isn’t as all around good as Snort was. 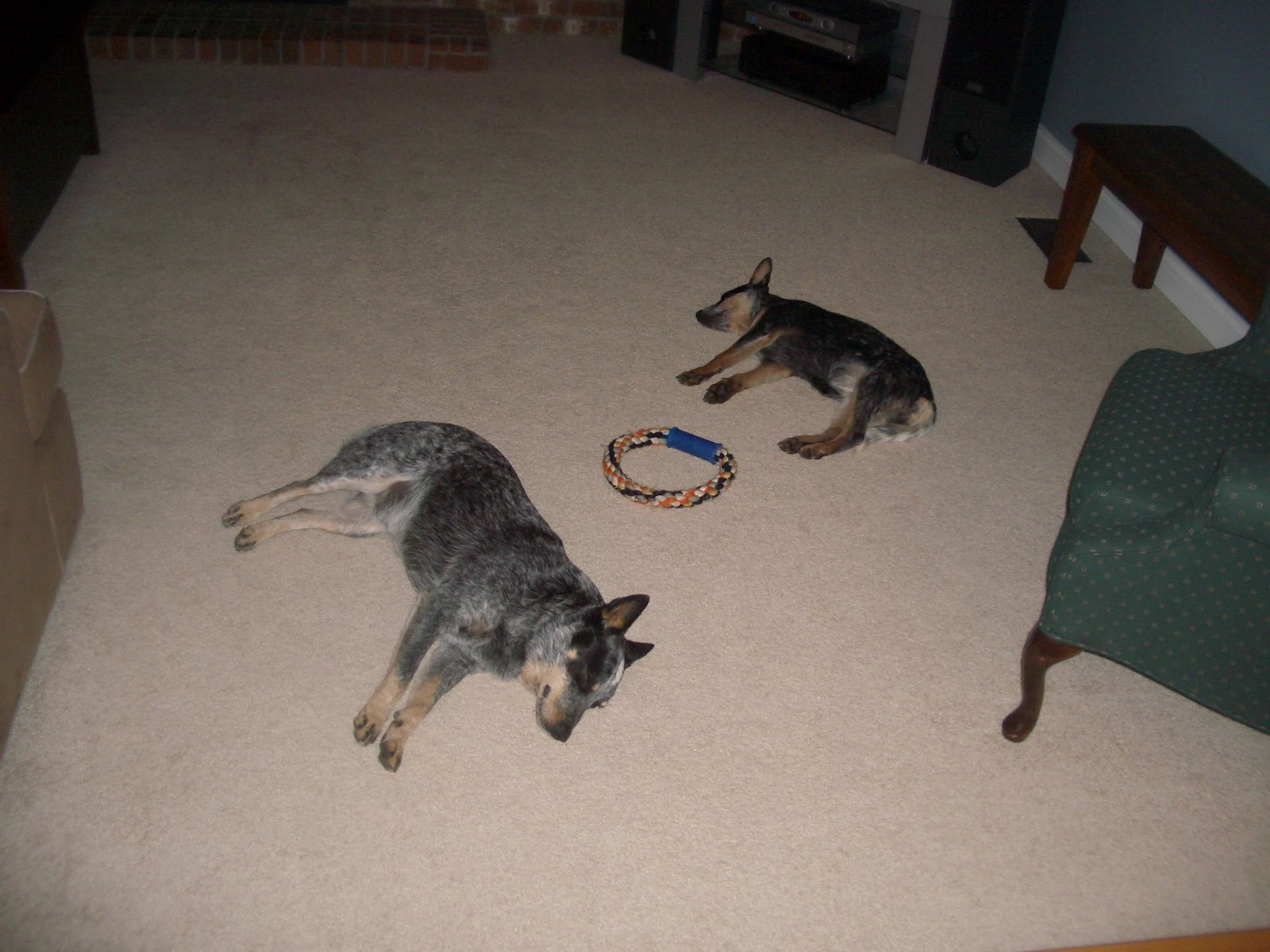 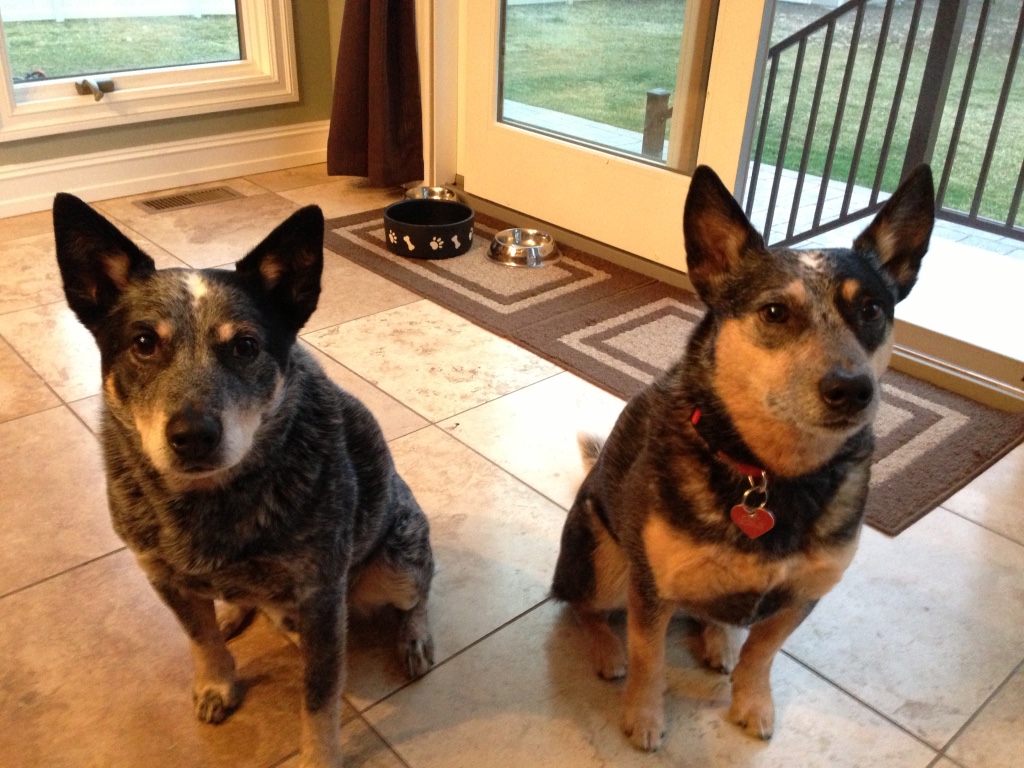 Matty and I have this thing where we give a dog (and our children!) one nickname and then it just kind of evolves into another one . . . and another one. It’s amazing anyone in our house ever comes when called. Snort had so many nickname over the years that I can’t even remember all of them, but here are a few: Snorty, Snots, Snooter (courtesy of my Grandma Matzo!), Snoot, Snooty, Snog, Snoggy Doggy, Lord Snots A Lot, Big Dude, Big Duder, Bort, Bortman, Big Guy, Budward. 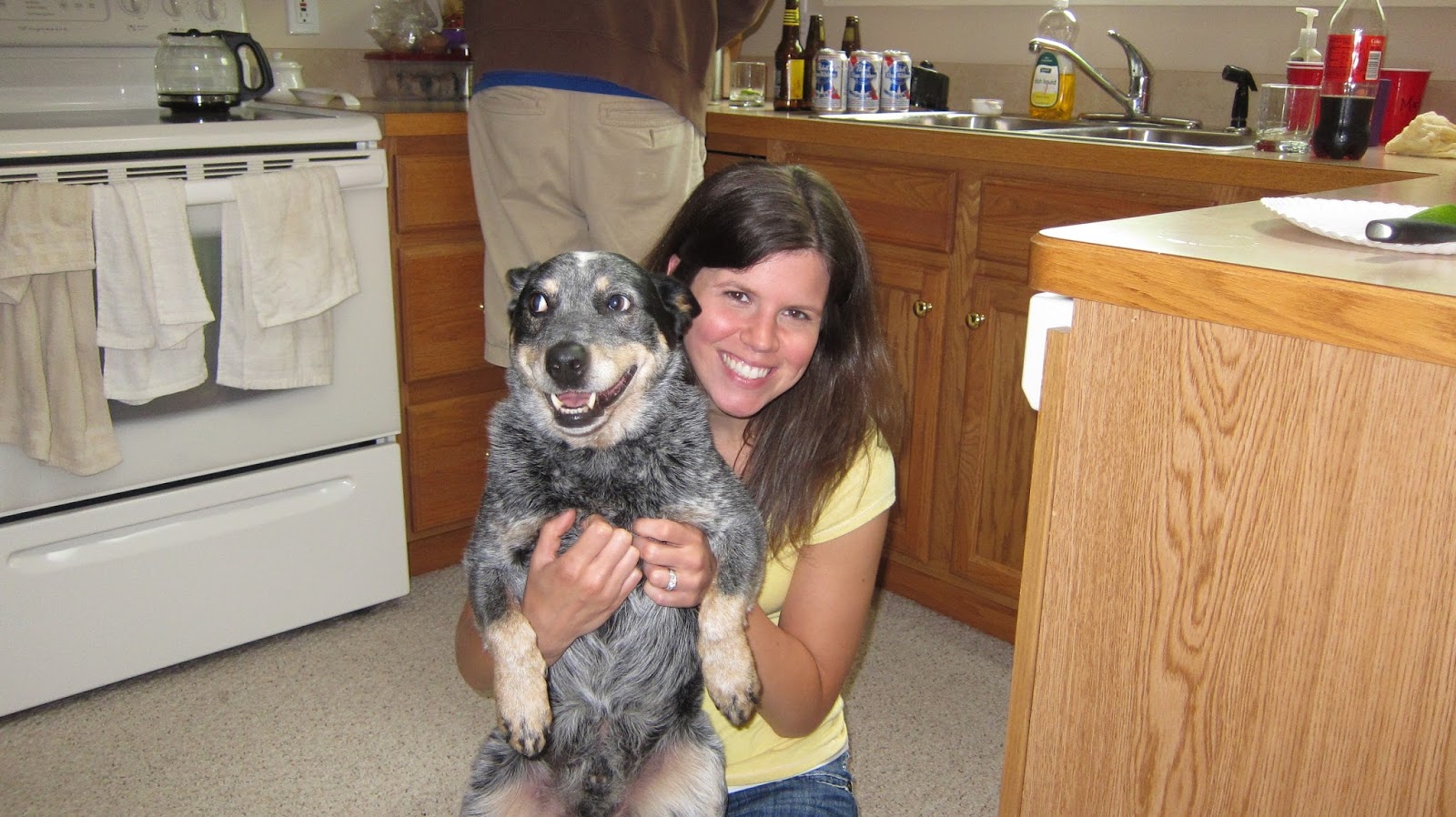 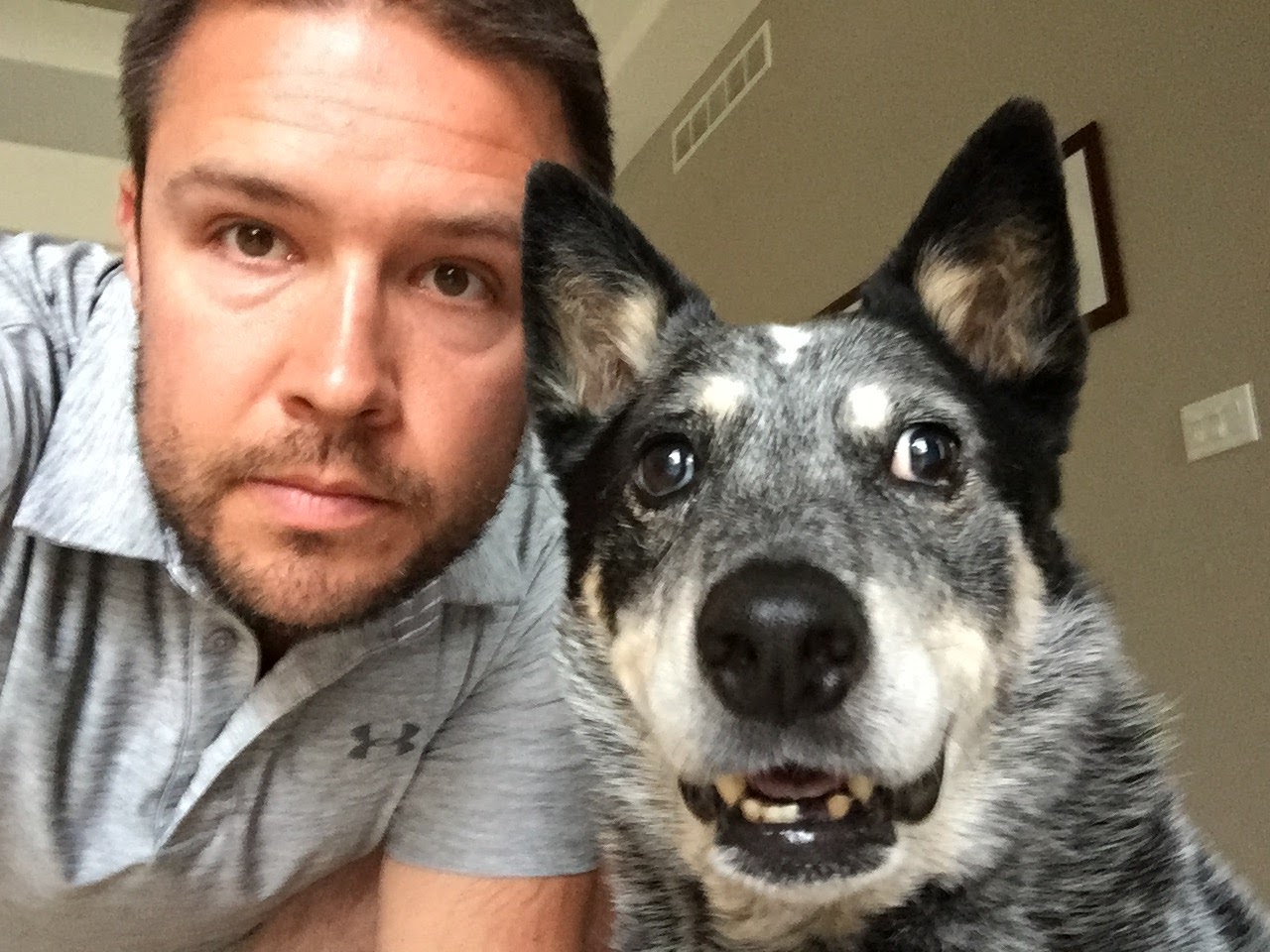 This is one of my favorite pictures . . . Snort meeting my nephew, Andy, for the first time. This was nine years ago! 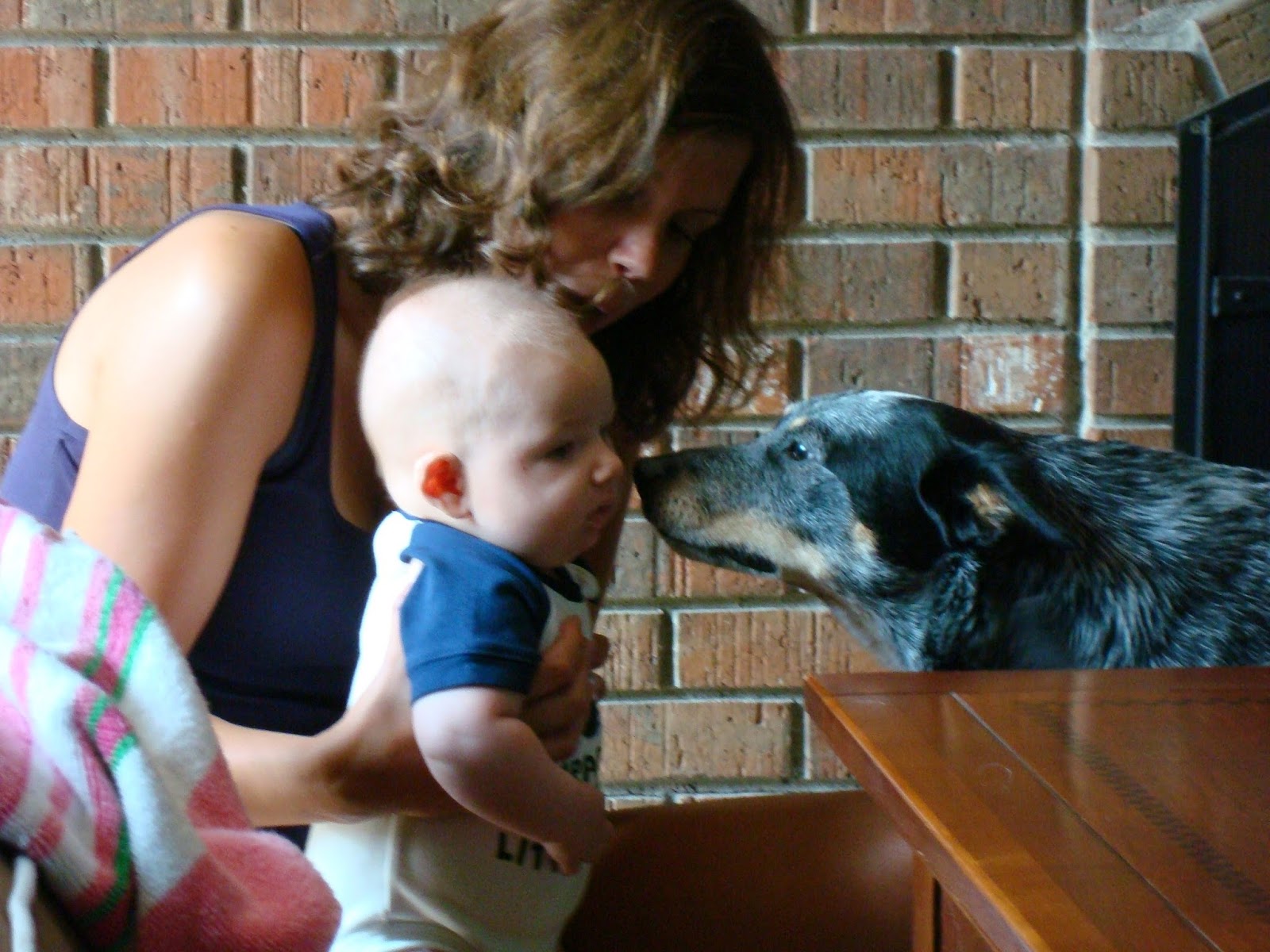 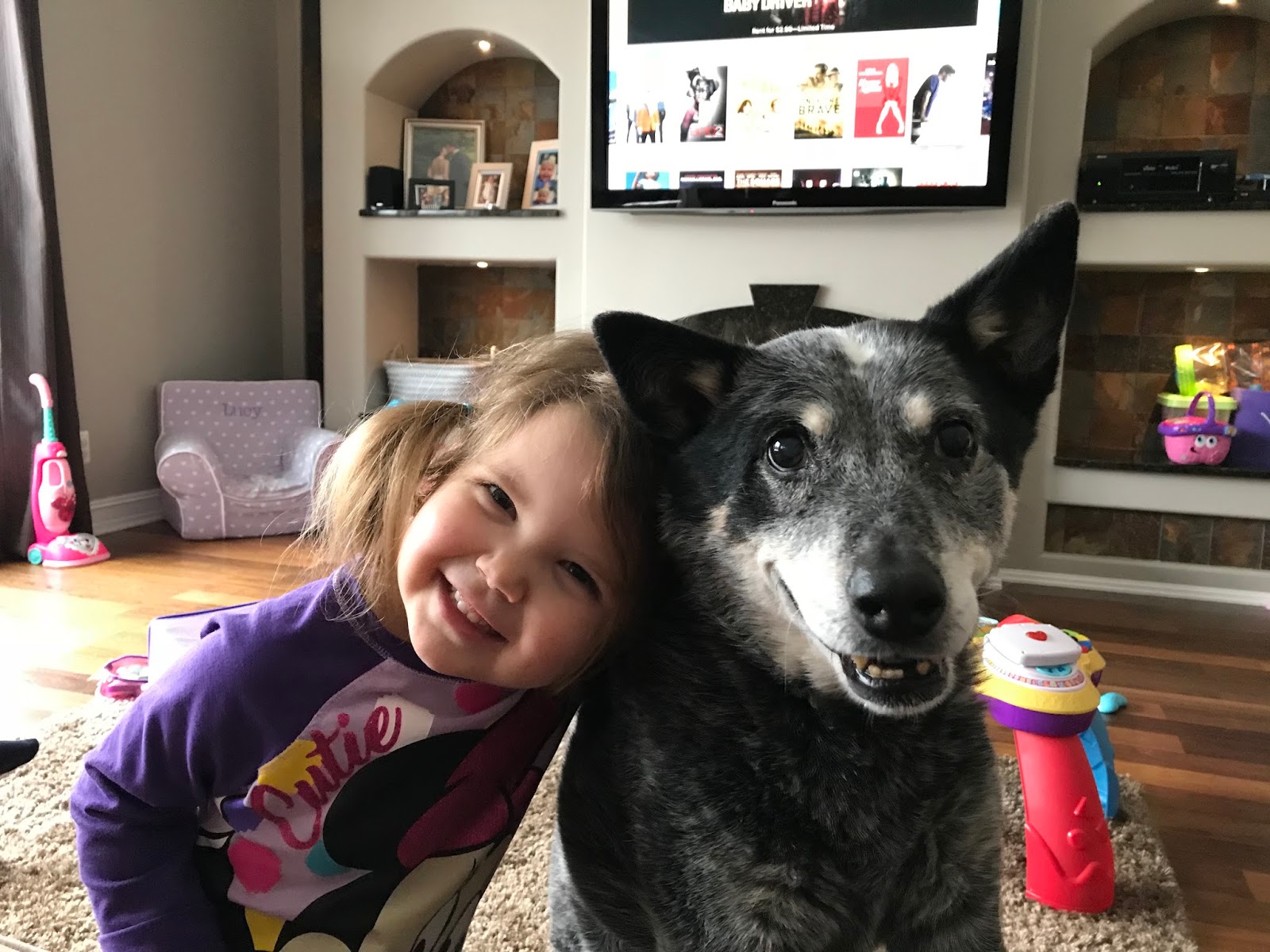 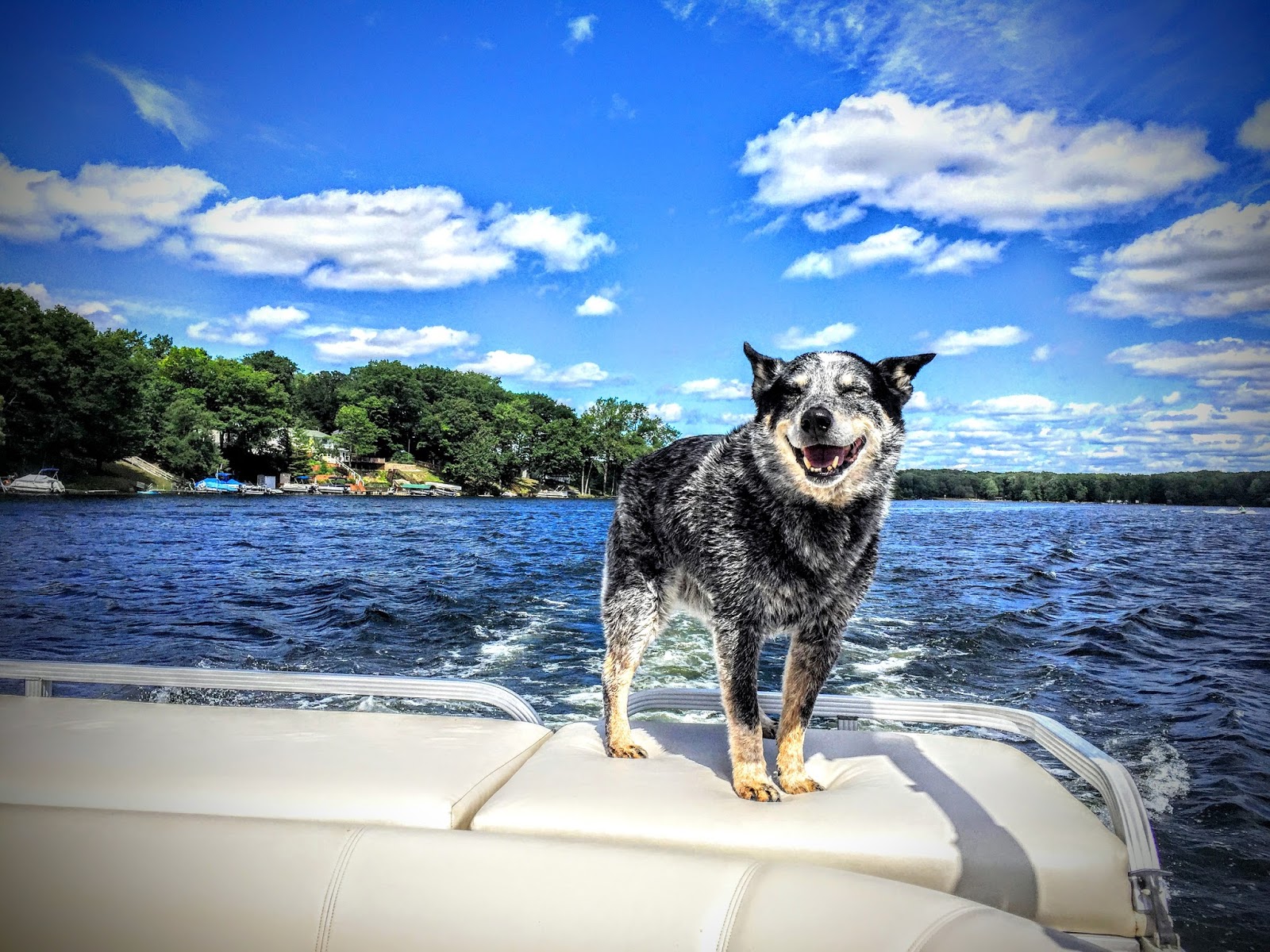 ~~~~
I’m the first to admit that I found the dogs to be a big pain in the butt once the girls were born. I couldn’t leave toys on the floor, there’s unbelievable amounts of dog hair everywhere, and they’d bark and wake up napping babies. However, when push came to shove, I love my dingos and am having a really hard time going about my day without Snort. The level of sadness I feel is actually quite surprising to me. One minute I’m feeling fine, and then the next minute Lucy waves at the sky and says, “Goodnight, Angel Snort,” and the waterworks start all over again.
I know it’ll get easier with each passing day, and I look forward to the days when there’s more joyful memories and less sadness.
Here’s hoping the upcoming week goes better than our weekend.
XOXO