Life has been a little different around here lately. We’re adjusting to life with just one doggie, and it’s definitely a lot harder than we thought. Apparently, it took a few days for the reality of the situation to kick in for Lucy because she seemed to be doing fine until Tuesday morning. She woke up crying for Snort, and has had several little meltdowns and all kinds of questions since then.
But still, life most go on, and I’ve got some cute pictures to share.
Starting with Emmy’s new spring/summer shoes! Aren’t they adorable?! I’ve been a loyal Robeez fan since Lucy was an infant. Their socks and infant shoes can’t be beat, and these cuties are no exception! 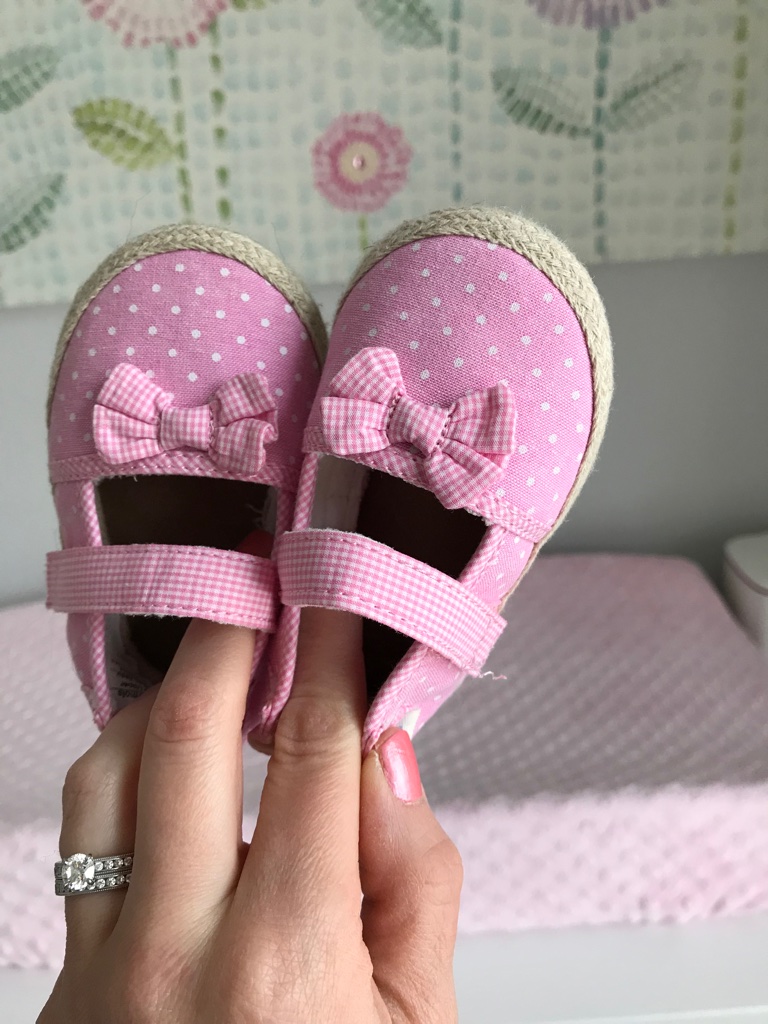 Last Friday we went to Sky Zone for a birthday play date for Lucy’s friend Ella. Look at all the kiddos we’ve acquired over the past few years! 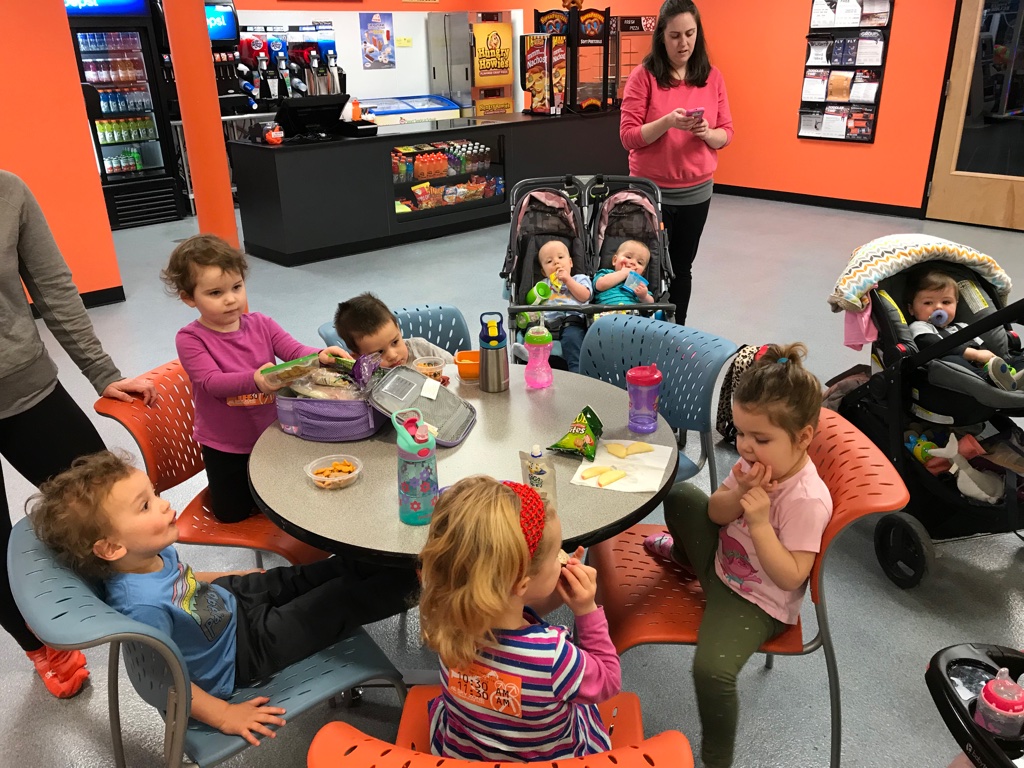 Emmy was there too. She did a great job bouncing on the trampoline and then hanging out and snacking. 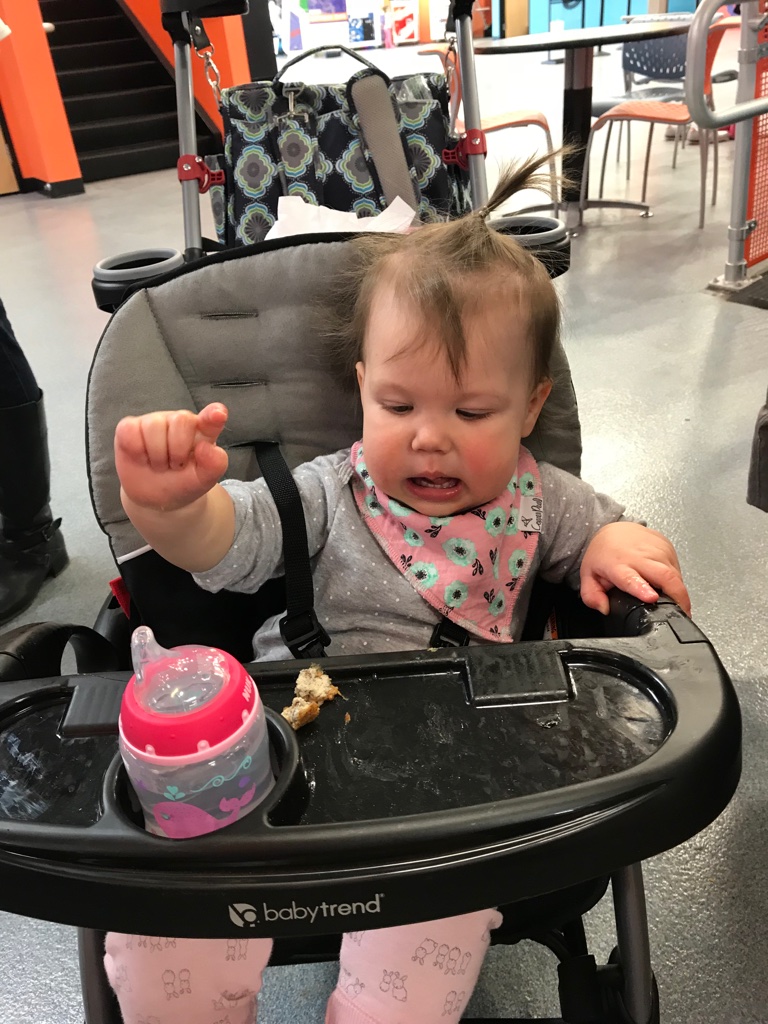 And this girl did a great job eating her cupcake treat! 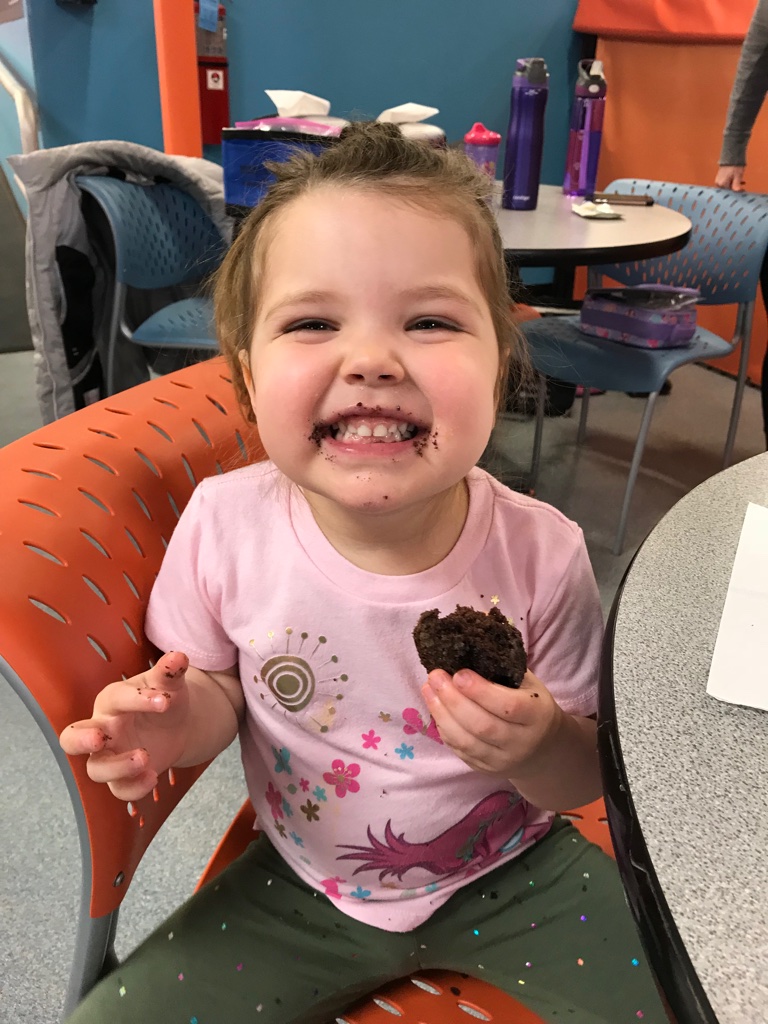 Snuggles on the couch during “rest time.” That term has a very loose meaning the past few weeks. 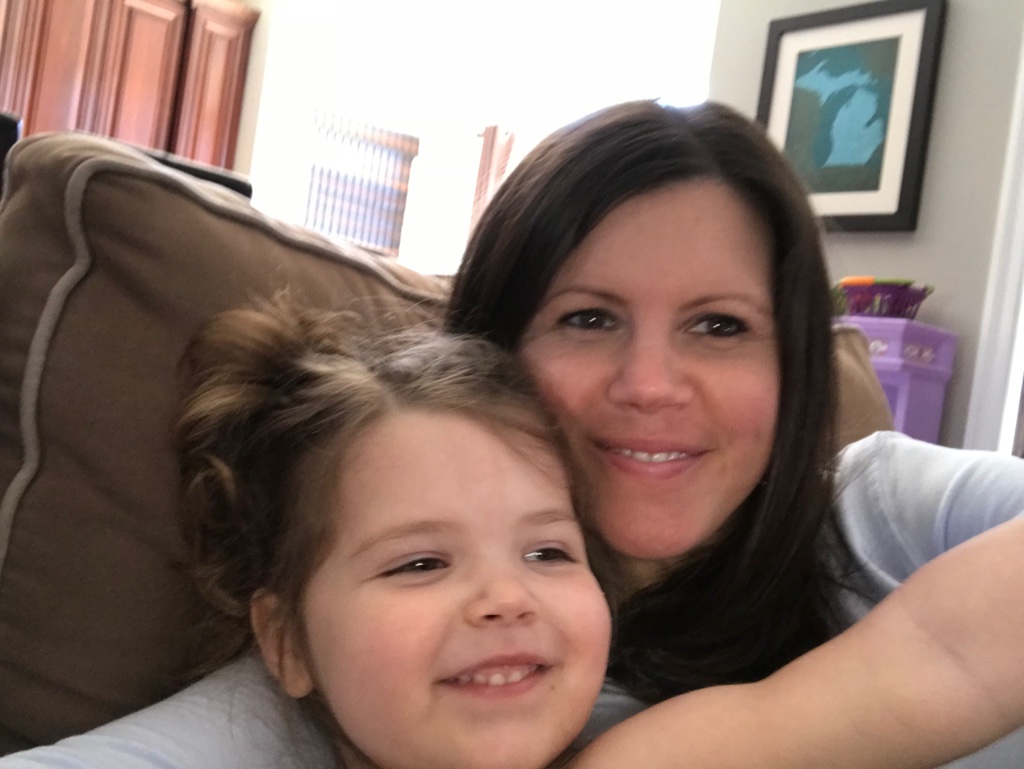 We had green smoothies for breakfast on St. Patrick’s Day . . . 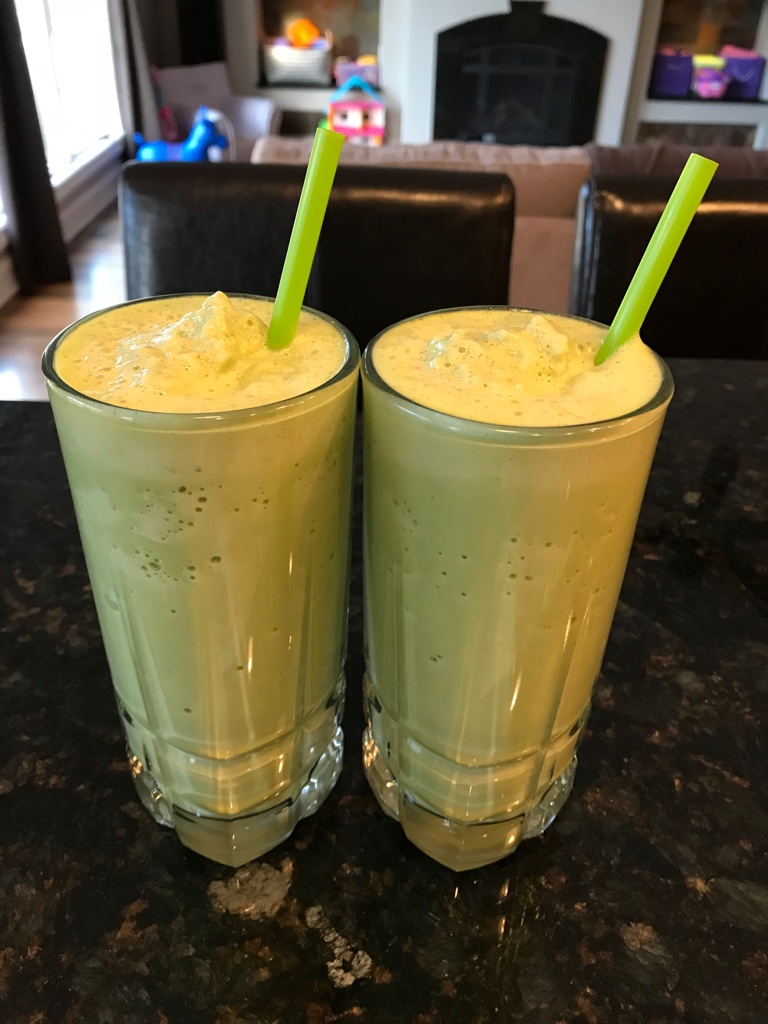 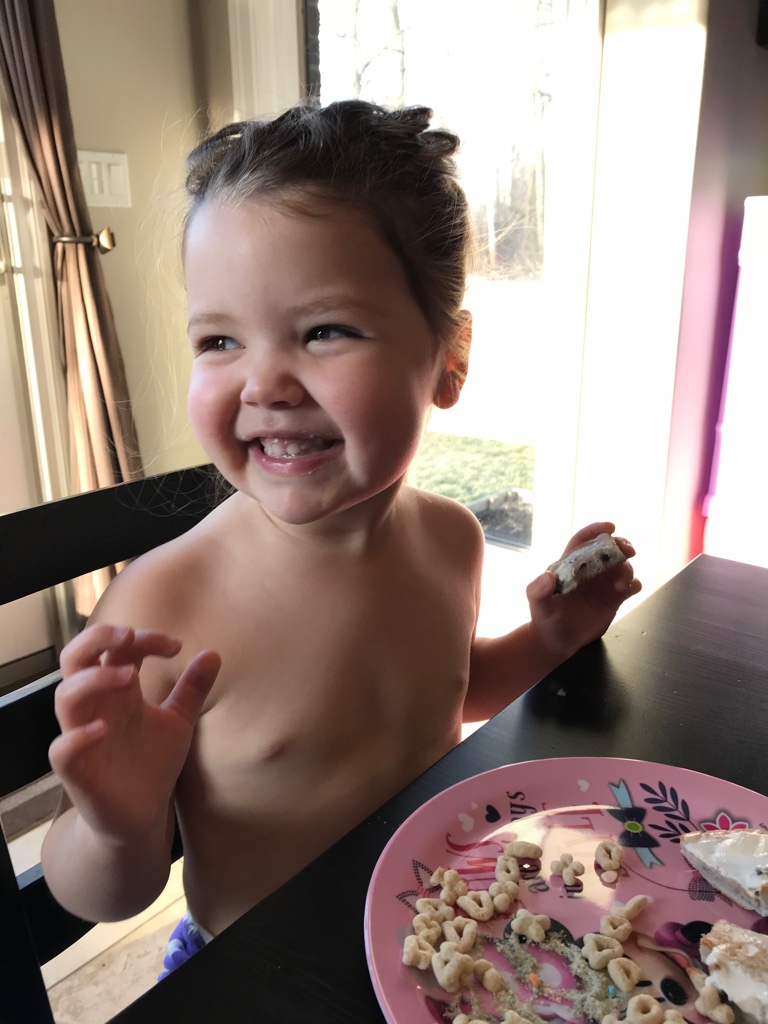 Believe it or not, Emily ate all the marshmallows and left the cereal pieces on her tray. #ibelieveit 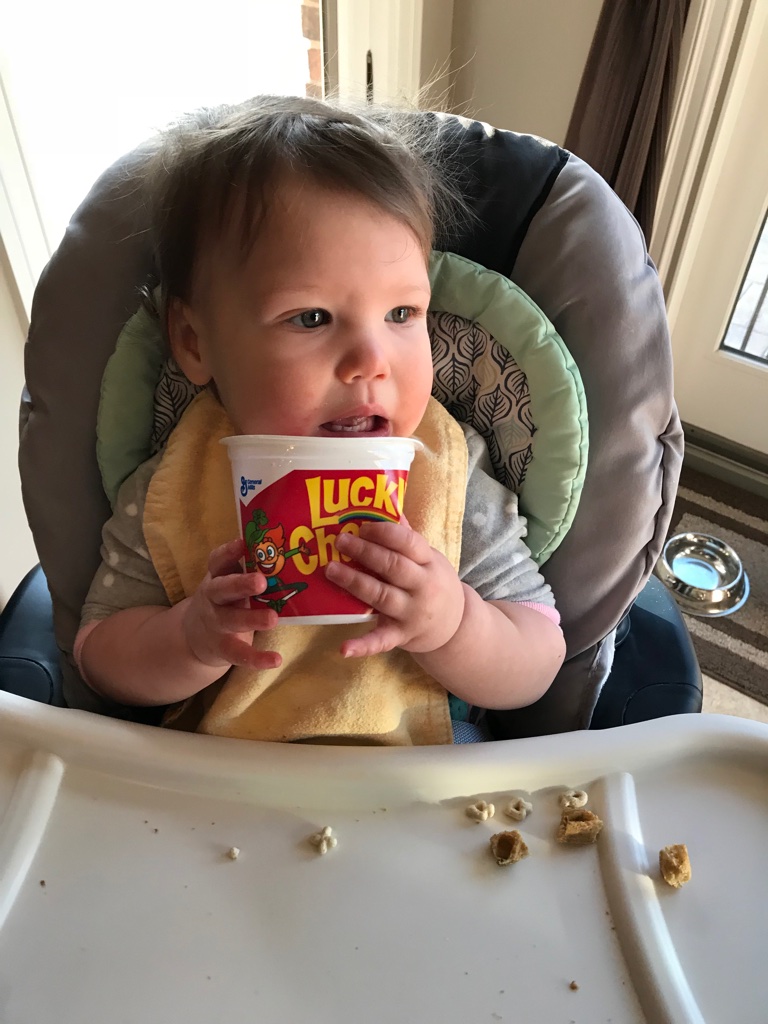 Lucy went to my mom and dad’s on Saturday while the whole Snort ordeal was happening. When I met up with them to pick her up, she was sound asleep. Playing with your grandparents all day is hard work! 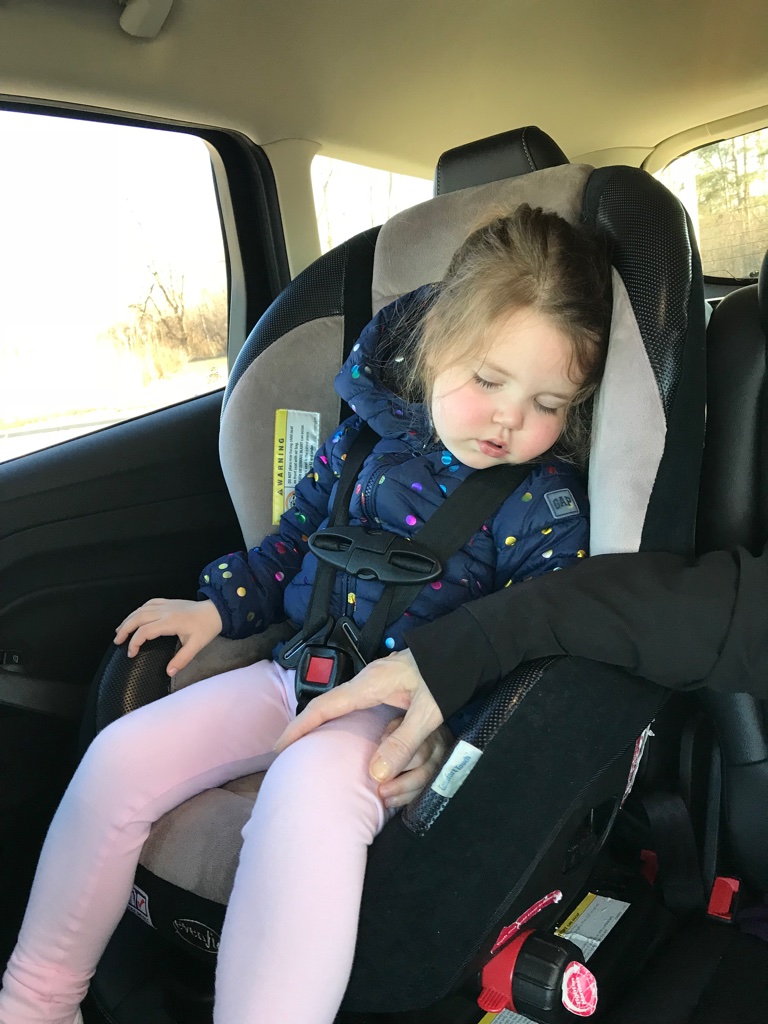 There’s no better way to start off a beautiful Sunday morning than with your first set of pigtails! 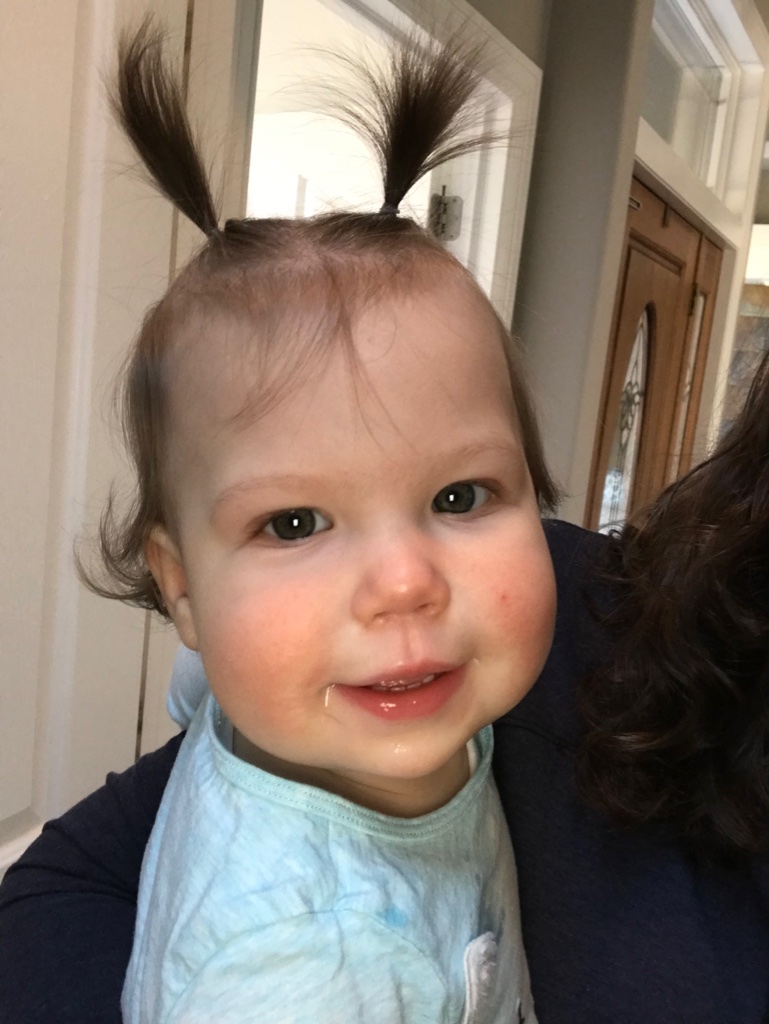 The weather was gorgeous on Sunday, and we were outside most of the day. It was a great way to keep busy and not think about Snort. We even walked to Target, which was a nice treat. 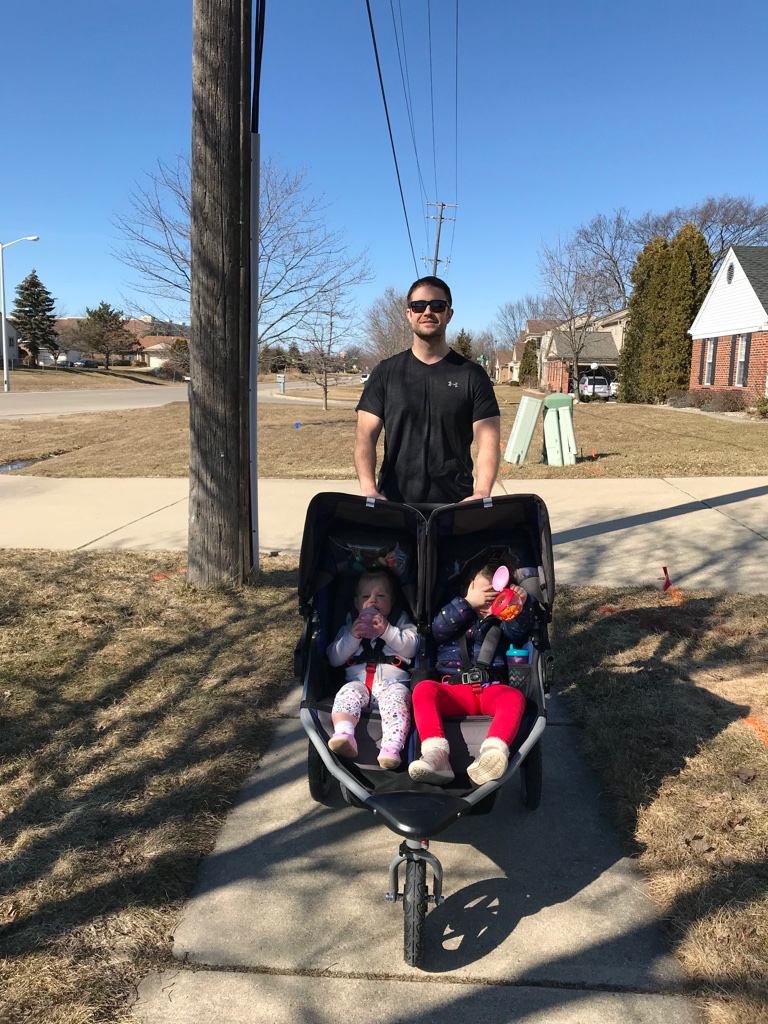 We’re loving on this girl a little more these days. 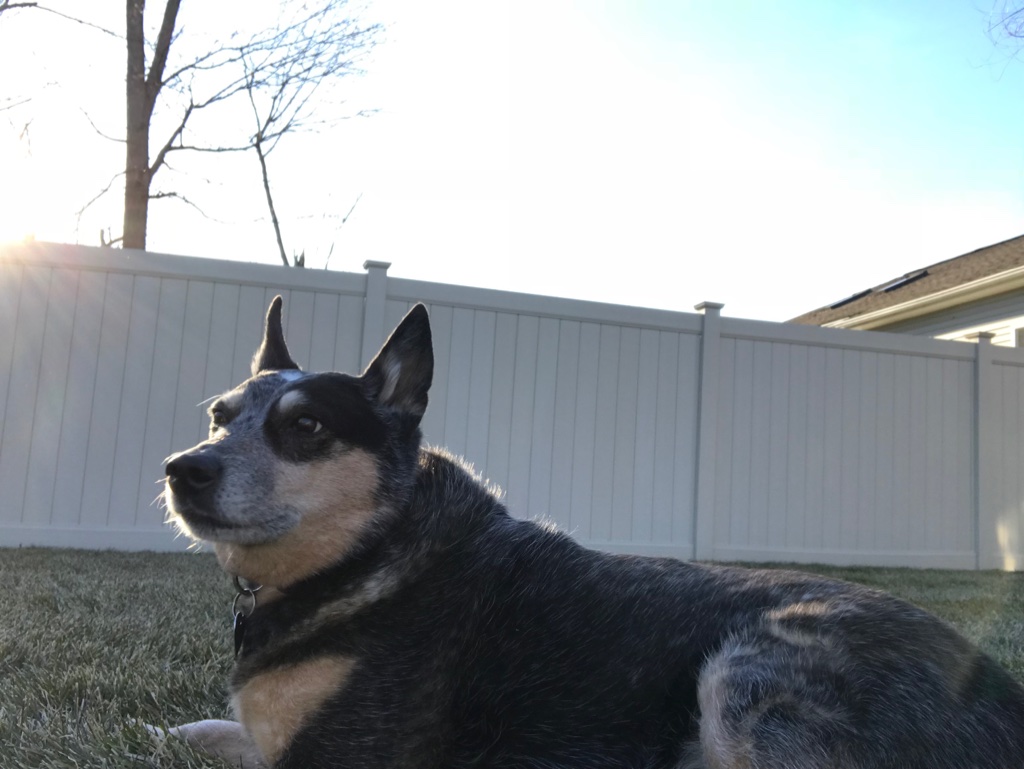 Both girls came down with colds over the weekend. Lucy, like her daddy,  is usually able to sleep no matter how stuffy she is. But Emmy, like her mama, has a really hard time sleeping when she’s stuffed up. This was me rocking her at like 9pm on Sunday . . . 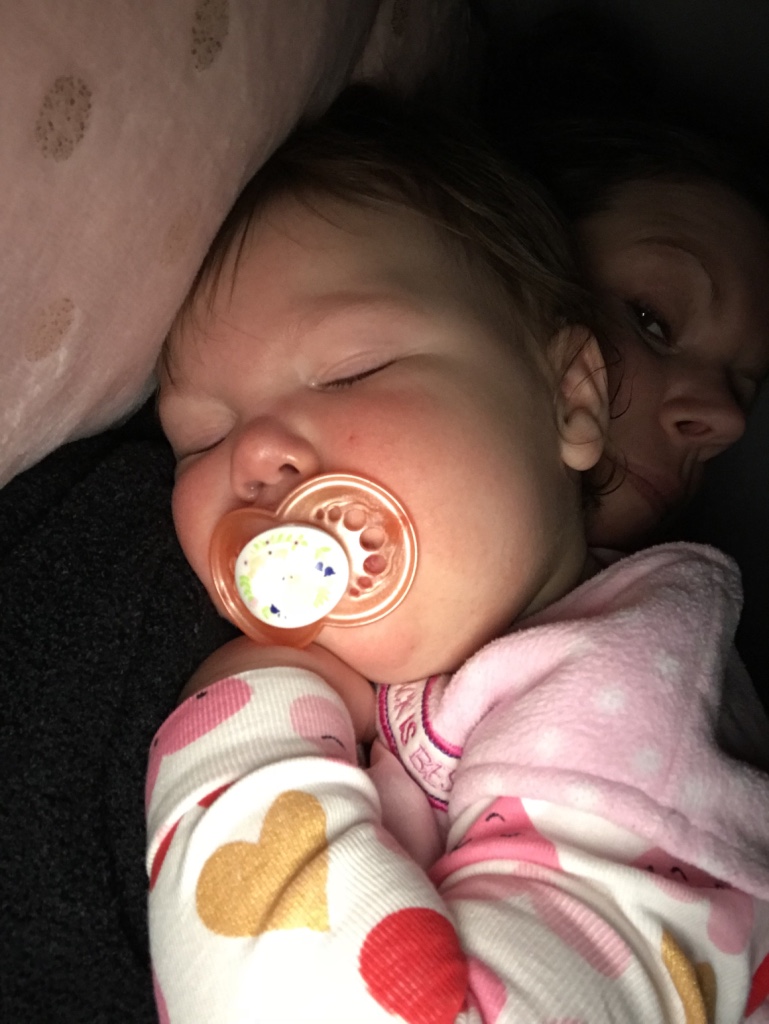 And here we were again at 2am. Poor little thing just wanted to be cuddled. 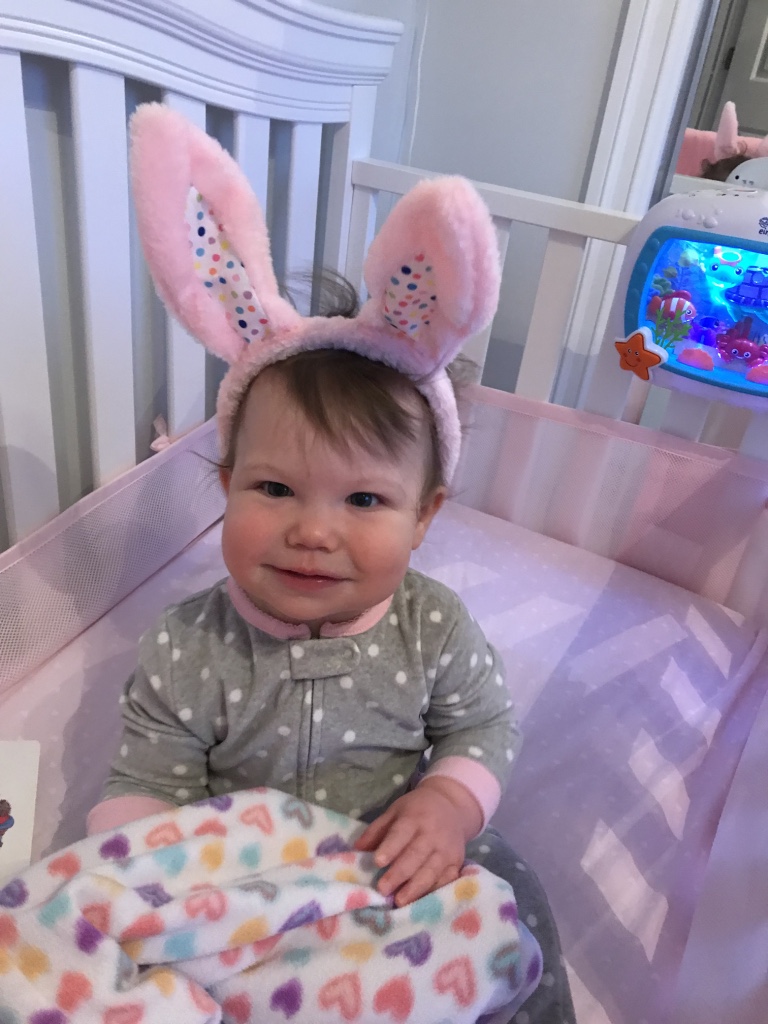 Lucy loves this little play set at school. I’m trying to convince Matty we need one for our backyard this summer. 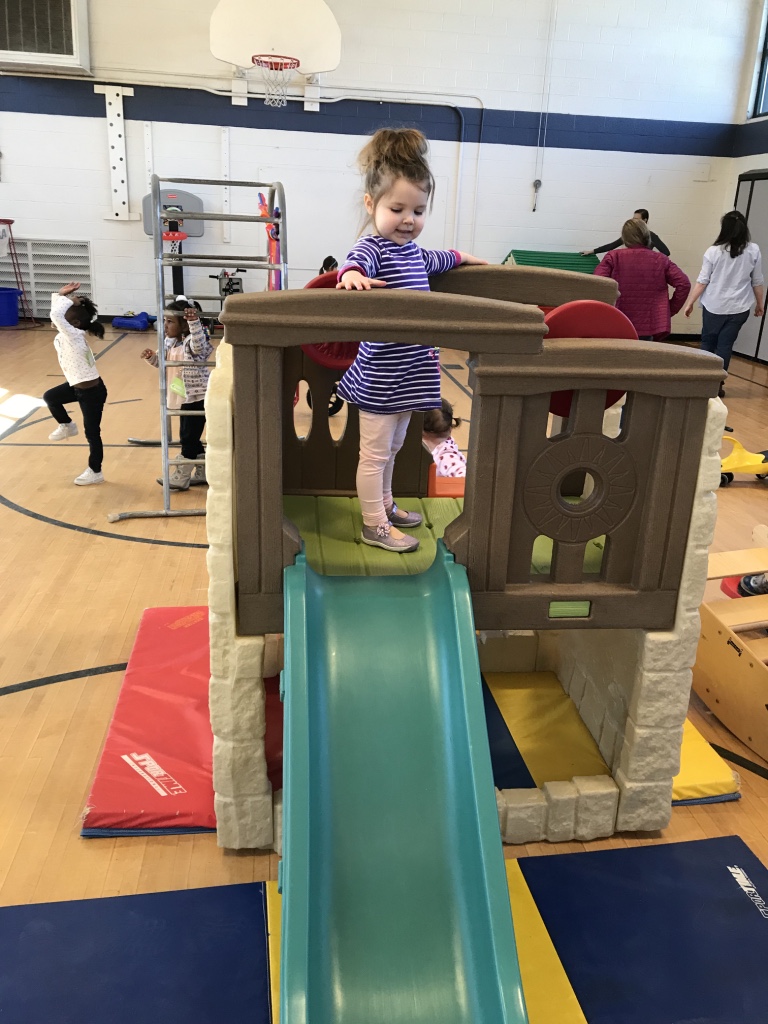 Tuesday was the first day of spring, and Dairy Queen was giving away free cones to celebrate. This is the second year in a row that we’ve gone, so I think we’ve officially started a family tradition! 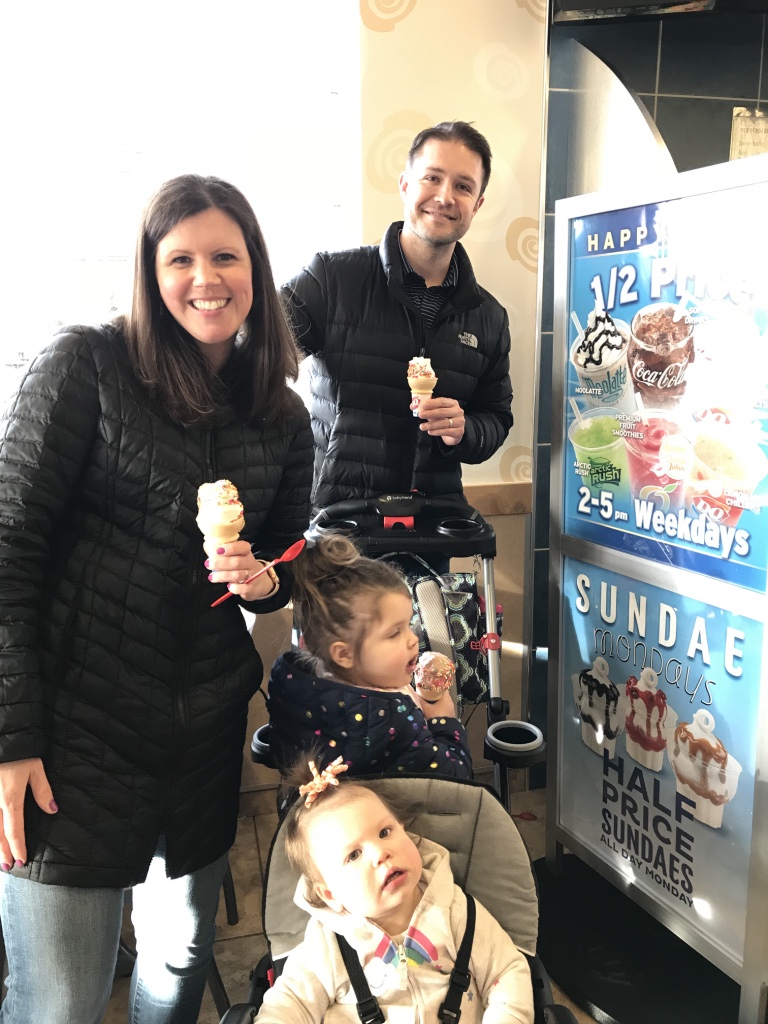 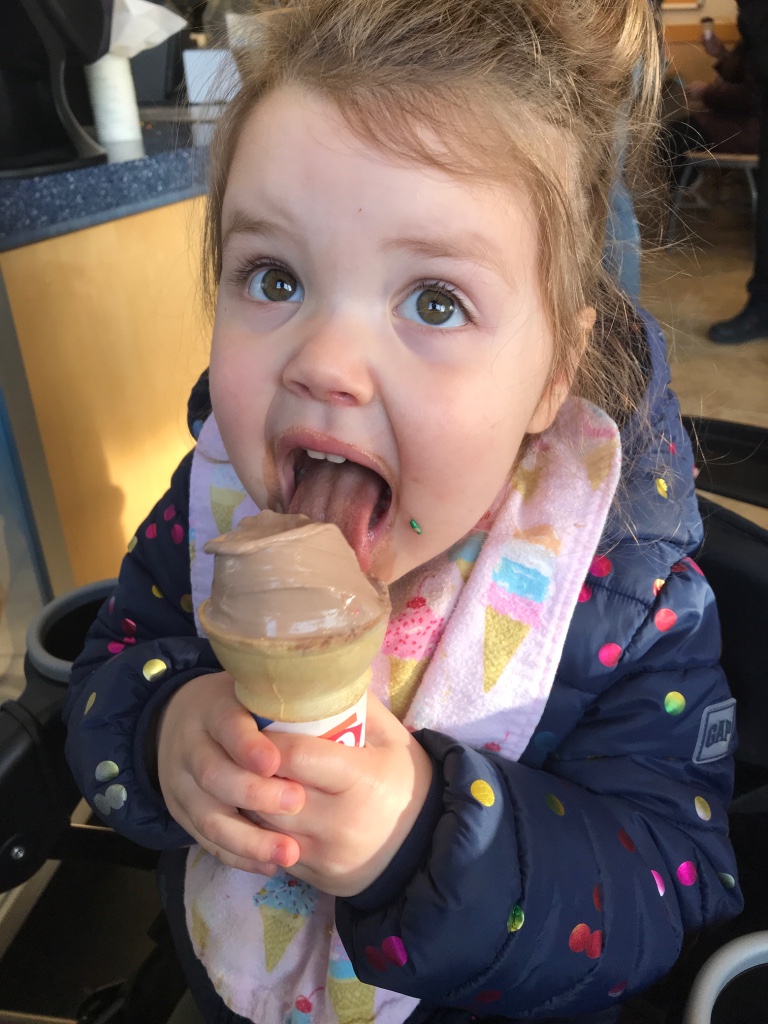 Em had her first ice cream before she’s even had her first birthday cake. She made a funny face for her first bite, but then quickly decided she needed to do a lot more research to determine if she liked it or not. #shelikedit 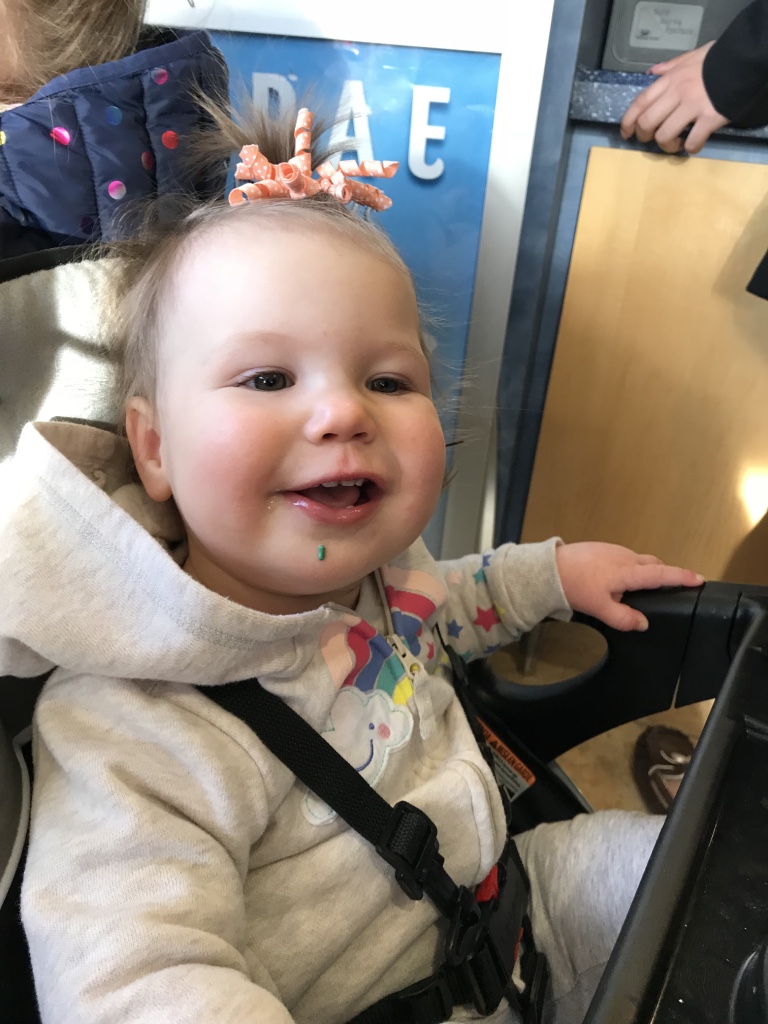 Ok, ready for my embarrassing story of the week? I woke up with a bit of a sore throat yesterday and decided to take some zinc, which is what I always do when the girls are sick or when I feel like I’m getting a cold. I wasn’t even thinking, and just popped two pills in right when I woke up because I didn’t want to forget. About ten minutes after Matty left for work I started feeling pretty nauseous and had to run to the bathroom. I felt awful and was convinced I had the stomach flu again. I texted Matty right away because I know how bad I get and that I would need help with the girls. He had just gotten to work, but turned around and came right back home.
I had managed to get both girls their morning milk, but Emmy was still in her crib playing with toys I had given her . . . in a poopy diaper. I was laying on her floor willing myself not to throw up anymore. Matty came home, got everyone changed and fed, and decided to take Lucy to Rita’s for the day. A little while after he left, I started to feel a lot better and was even a little hungry . . . which never happens when I get the stomach flu. I googled “zinc on an empty stomach,” and it turns out that’s a big no no! I mean, I know you’re not supposed to take medicine on an empty stomach, but I guess I didn’t really even think about a vitamin. Everything I read said that taking zinc on an empty stomach makes you feel like you have the stomach flu until it all gets out of your system. Ugh, learn from my stupid mistakes!
So I felt embarrassed that I was such a dumby and that Matt had to come home from work. But, in the end, we had a nice quiet day at home with just Emily . . . which has never happened before!
At one point we Face Timed Lucy, and she wanted to see Emily. Here’s Lucy getting super close to the phone so she could see Emily and talk to her. Maybe she really does love her! 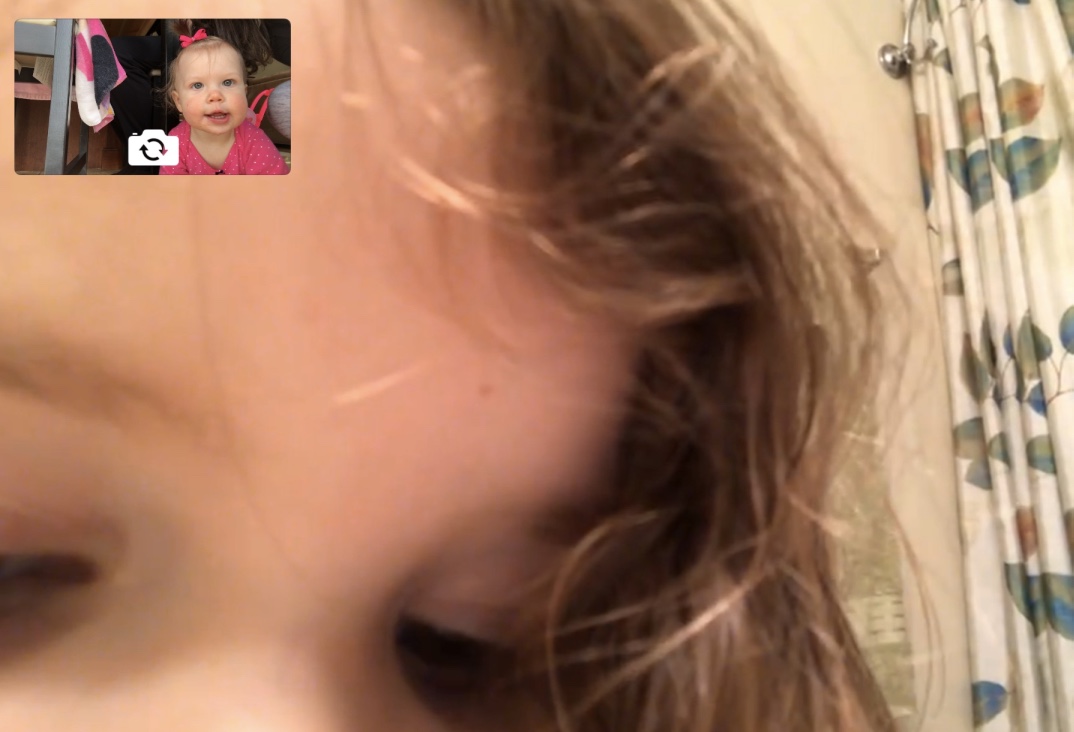 I saw this the other day and it made me LOL . . . because sometimes I just want to eat a Reese’s Peanut Butter Egg and not have to share it! 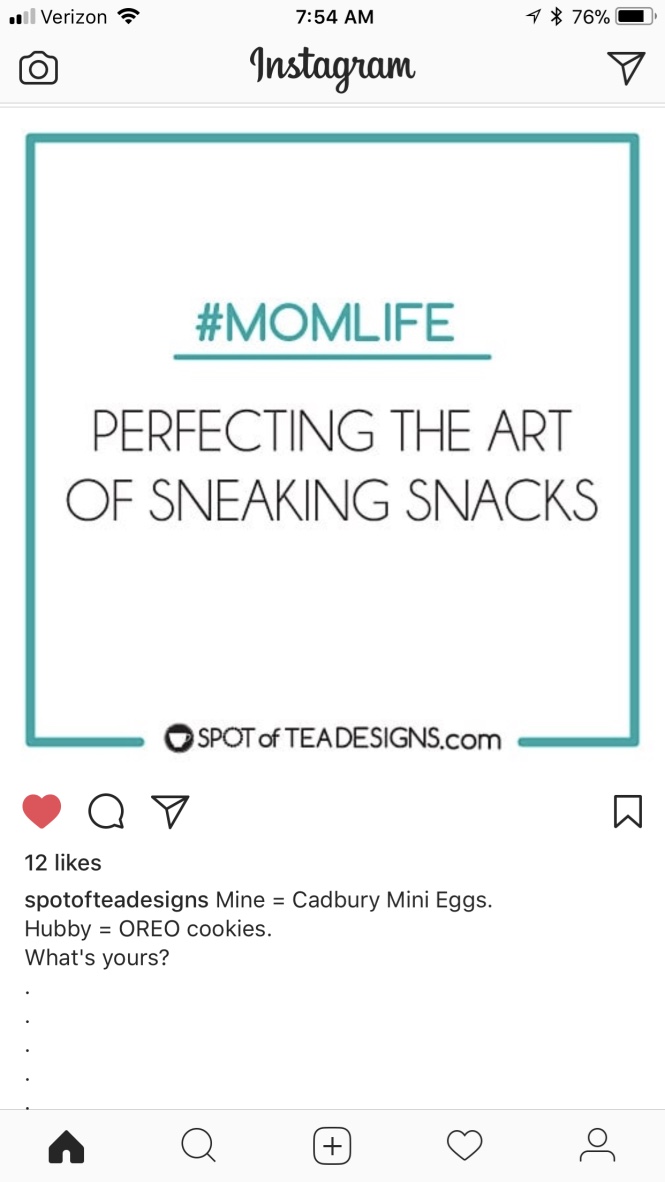 And that’s been our life lately.
Today I’m prepping for my big Moms Night Out party that I’m hosting tomorrow night. This is the one that got cancelled last month when we got 12″ of snow on the day we were supposed to have it. Luckily, there’s no snow in the forecast for Friday. #sofar
Have a great weekend!
XOXO