Happy Thursday!
We’ve pretty much been homebound all week because of the girls’ colds. When they are super snotty and coughing I can’t justify taking them to a public play place, so we’ve just been running a few errands and playing with all the toys.
Matty was doing some work in the living room, and Emily was very interested in his tools. 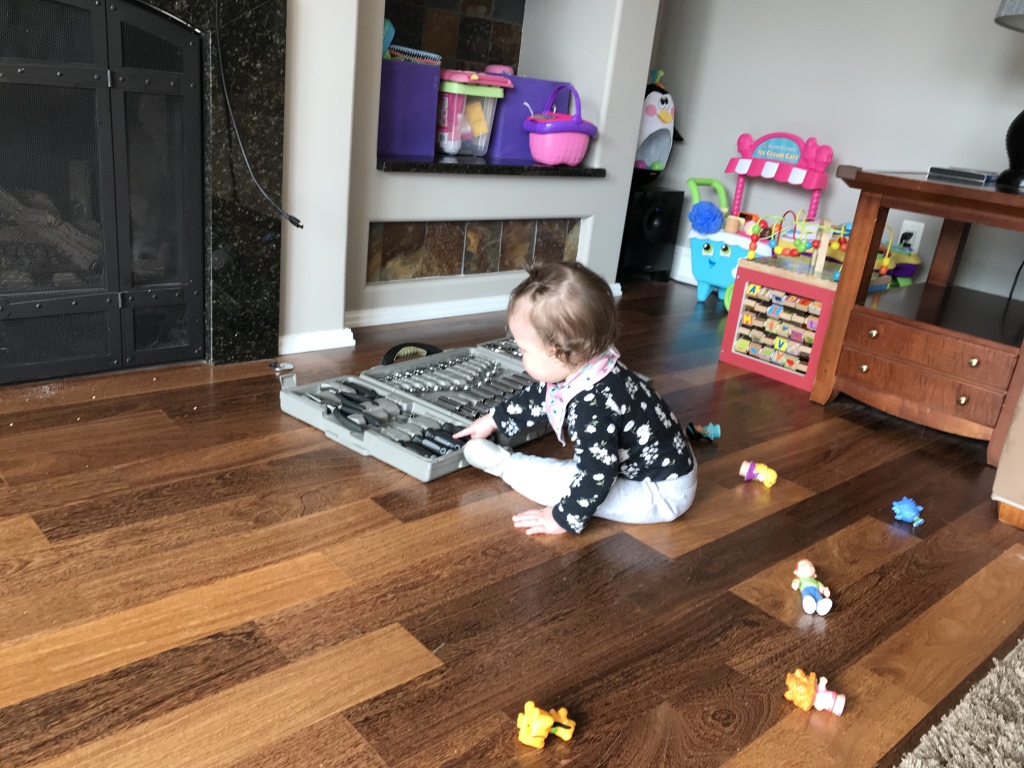 Sweet Lucy Belle was playing school the other day and said she had to go pack her backpack. When she came back, she had the entire contents of my bathroom drawer in her backpack! LOL! My nail file, dental floss, face cream, eye cream . . . even my toothbrush! If you look on the top shelf in the picture, you can see it all sitting there because I didn’t want Emmy to get into it. Oh, and, yes, I threw my toothbrush away and got a new one. I switch out all our toothbrushes on the first of the month, so I was bummed to see that one go so soon! 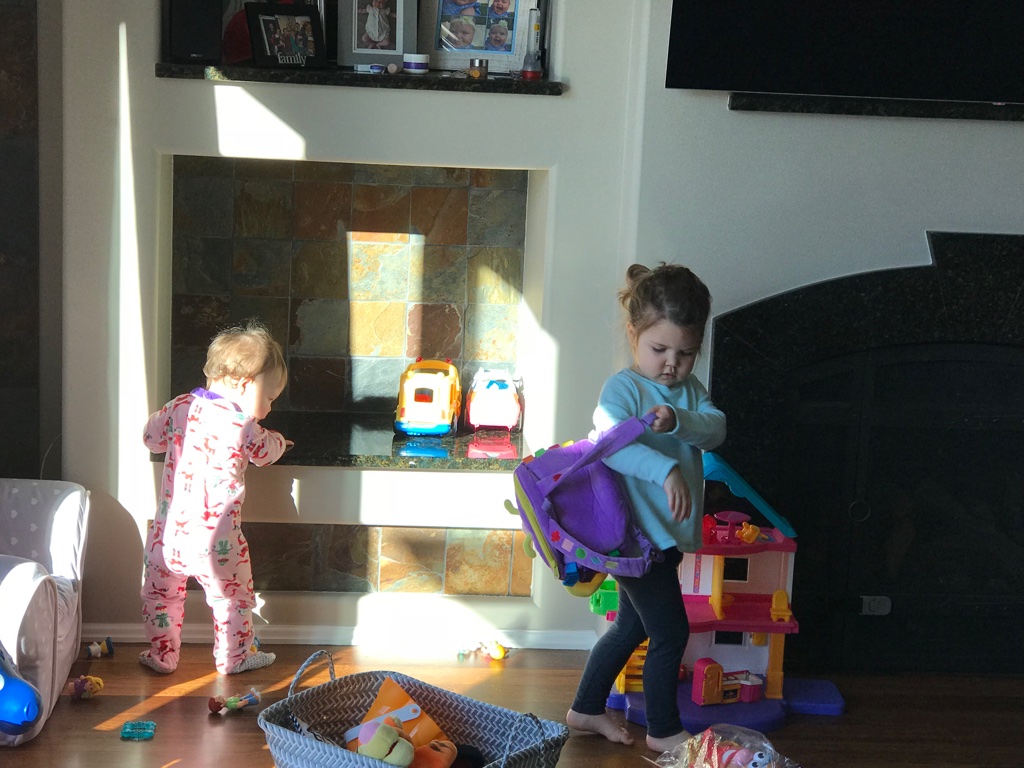 Emmy Roses discovered our animal magnets the other day. For now a cookie sheet is working, but pretty soon I’ll put them on our dishwasher. 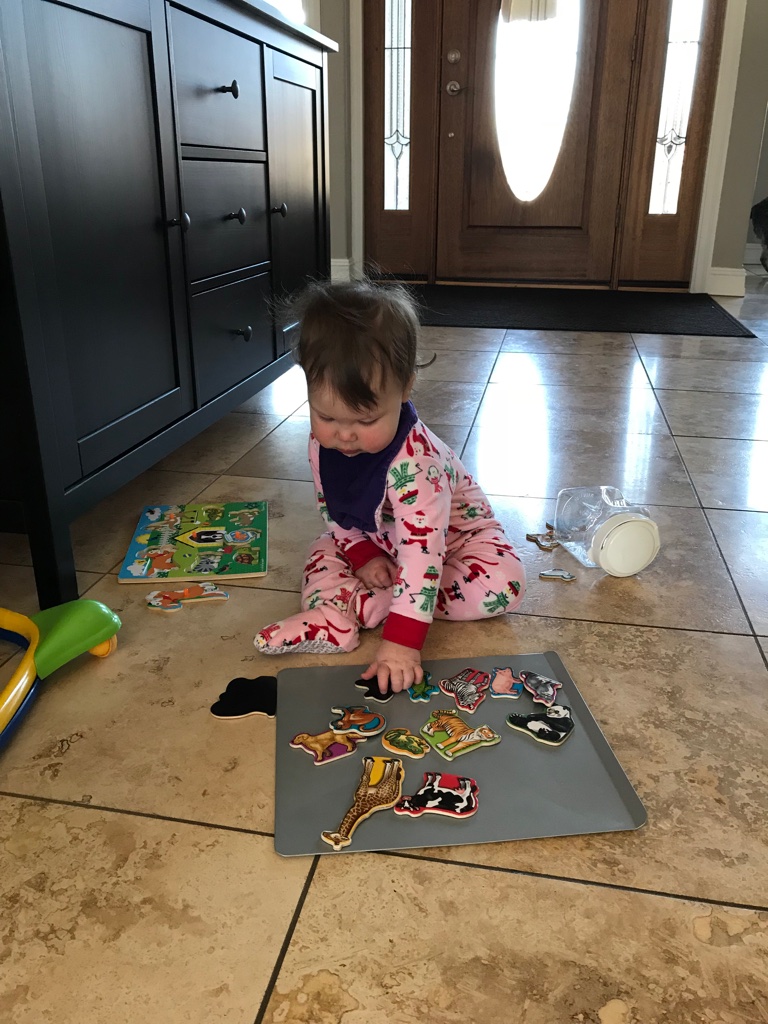 Lulu loves puzzles, but dislikes when Emmy tries to eat the pieces. #understandable
She’s been doing lots of puzzles on our bed lately. 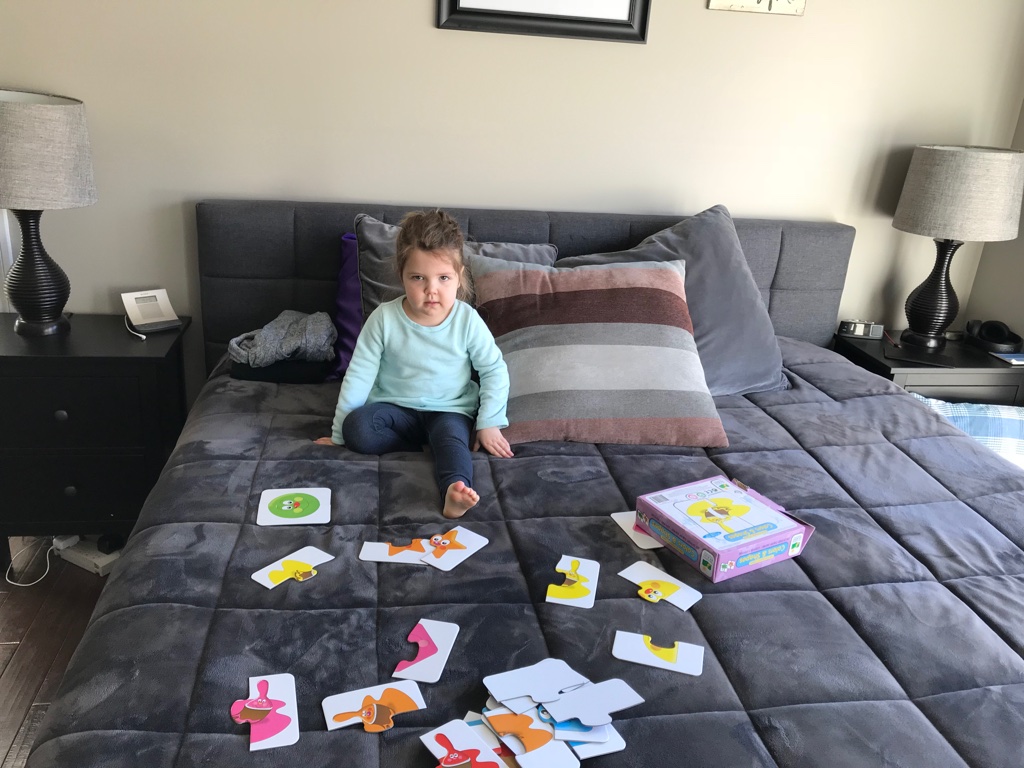 We usually do our grocery shopping at Meijer. However, we decided to switch it up and go to Kroger on Monday, and Lucy was in her glory in this cart. Meijer has zero fun carts . . . why is that?! 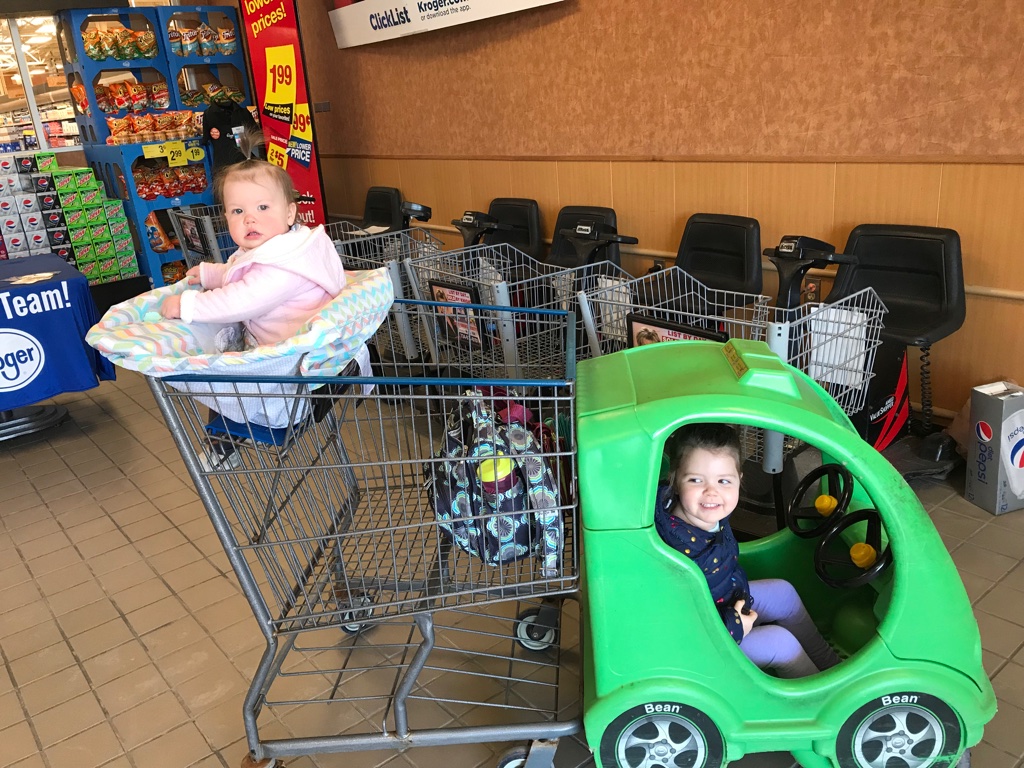 Since we were spending so much time at home, I decided to do a trial birthday cake for Emmy’s first birthday. I don’t anyone to see the cake before her party, though, so I put a heart stamp over the cake in all the pictures. Obnoxious? Probably.
Lucy did a great job keeping busy with some frosting of her own. After dinner Lucy got a tiny little piece, and I think she enjoyed it! 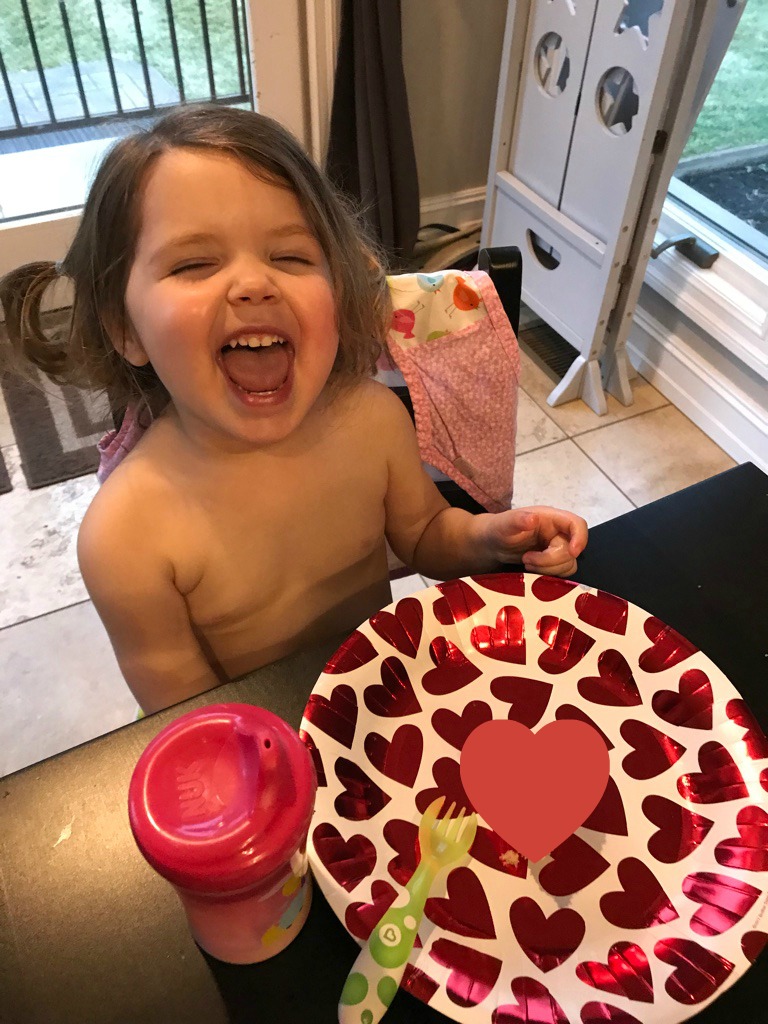 Matty showed the cake to Emmy, and we’re fairly certain she will dive right in when the big moment arrives. This girl would dive right into a bowl of peas of we’d let her, so I’m sure cake is definitely going to be her jam! 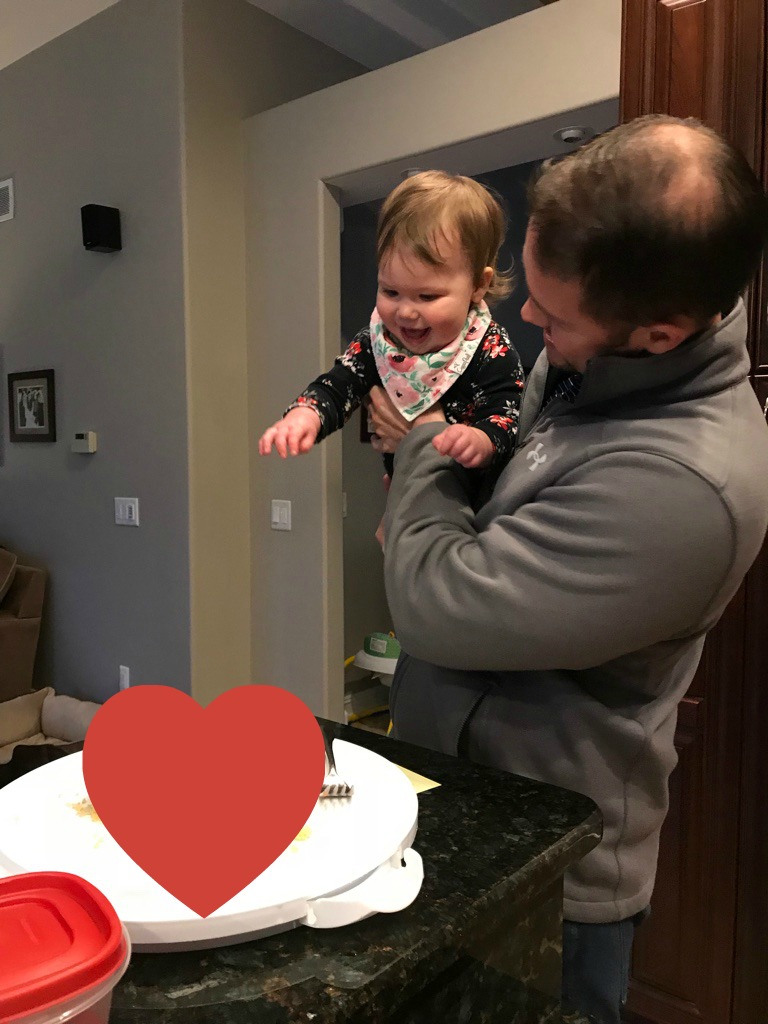 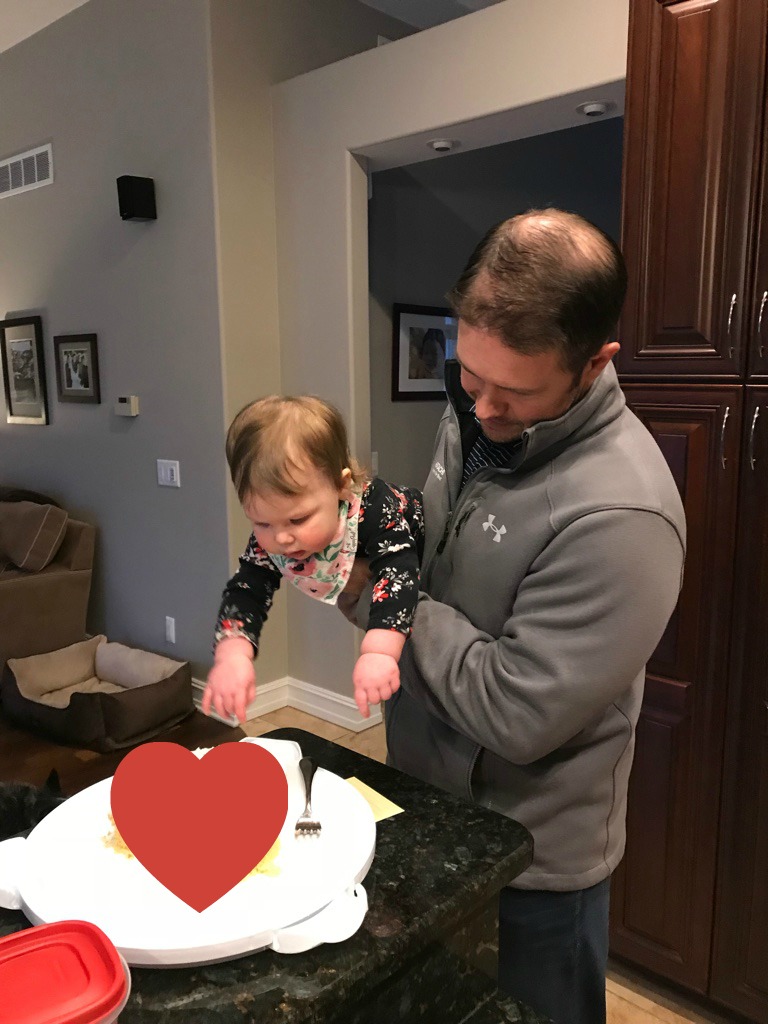 No big plans for the weekend other than another birthday party for one of Lucy’s friends. It seems we’ve officially entered the birthday party stage, and I kind of love it!
I’m also hoping a certain handsome hubby of mine will help me set up my new wireless printer.
#hinthint #winkwink
However, we’re losing an hour this weekend and that probably was going to be my “set up the printer” hour. Bummer!
Also, it seems that I can never remember what the heck to do with the girls’ sleep schedules during Daylight Saving(s) Time. Maybe just do nothing and hope for the best??
Have a great weekend!
XOXO