Whew! We had a busy weekend! Productive . . . but too busy!
Thursday was pretty mild so Lucy and I headed outside while Emmy napped. This girl could play outside for hours, even in the cold! 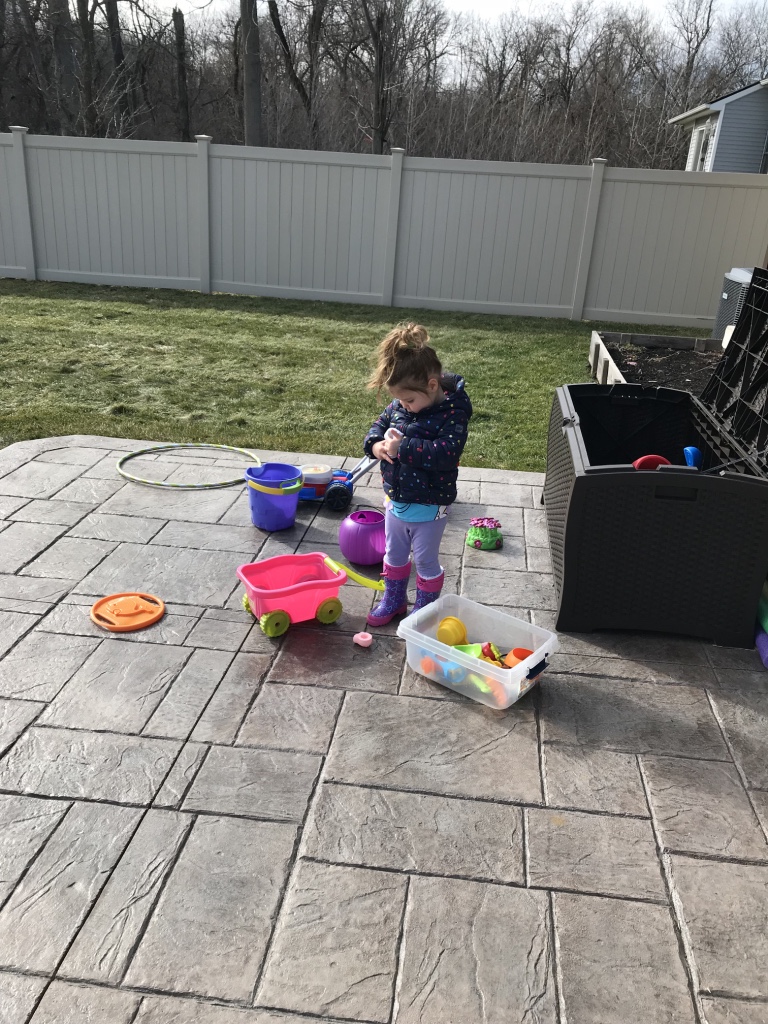 The grandmas watched the girls during the day on Friday so that I could have a little shopping time! My mom brought over this Minnie Mouse fanny pack that was mine when I was little. . . because clearly I was super fashionable when I was ten years old! 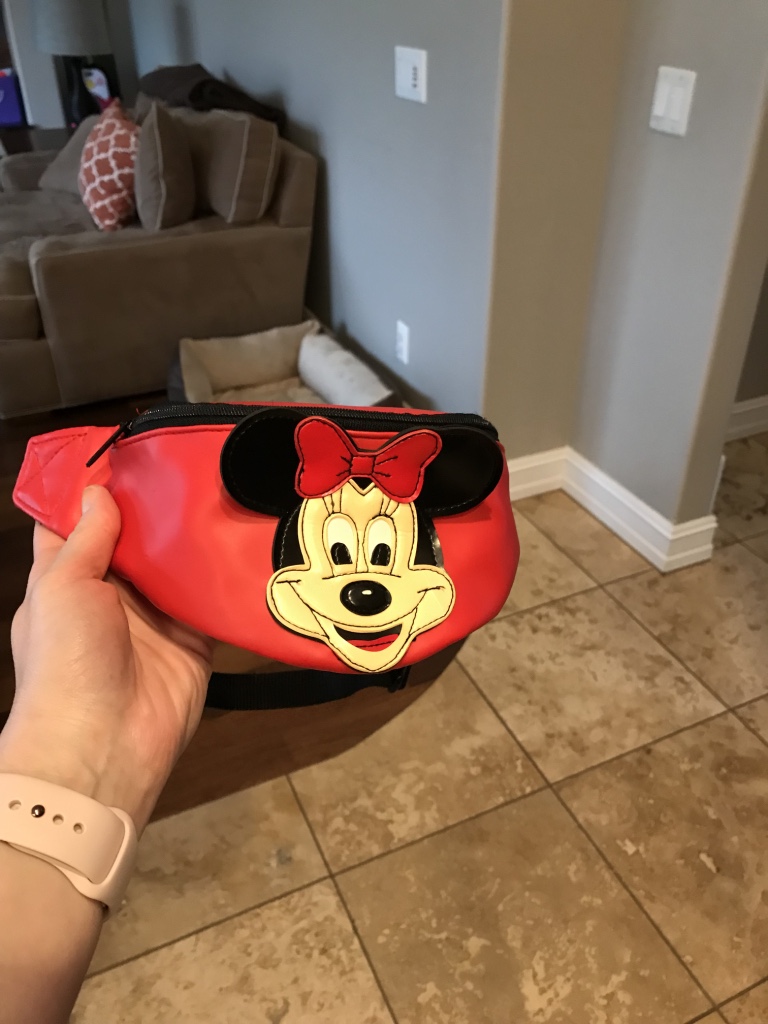 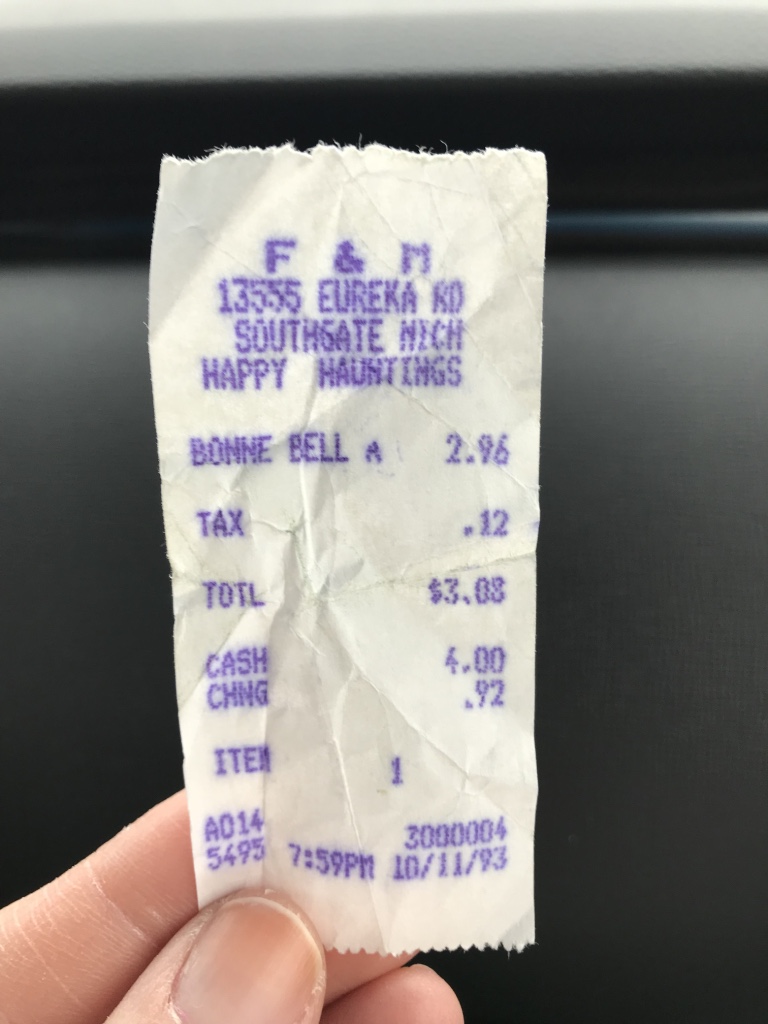 The whole gang was waiting for Matty to get home Friday evening. #TGIF 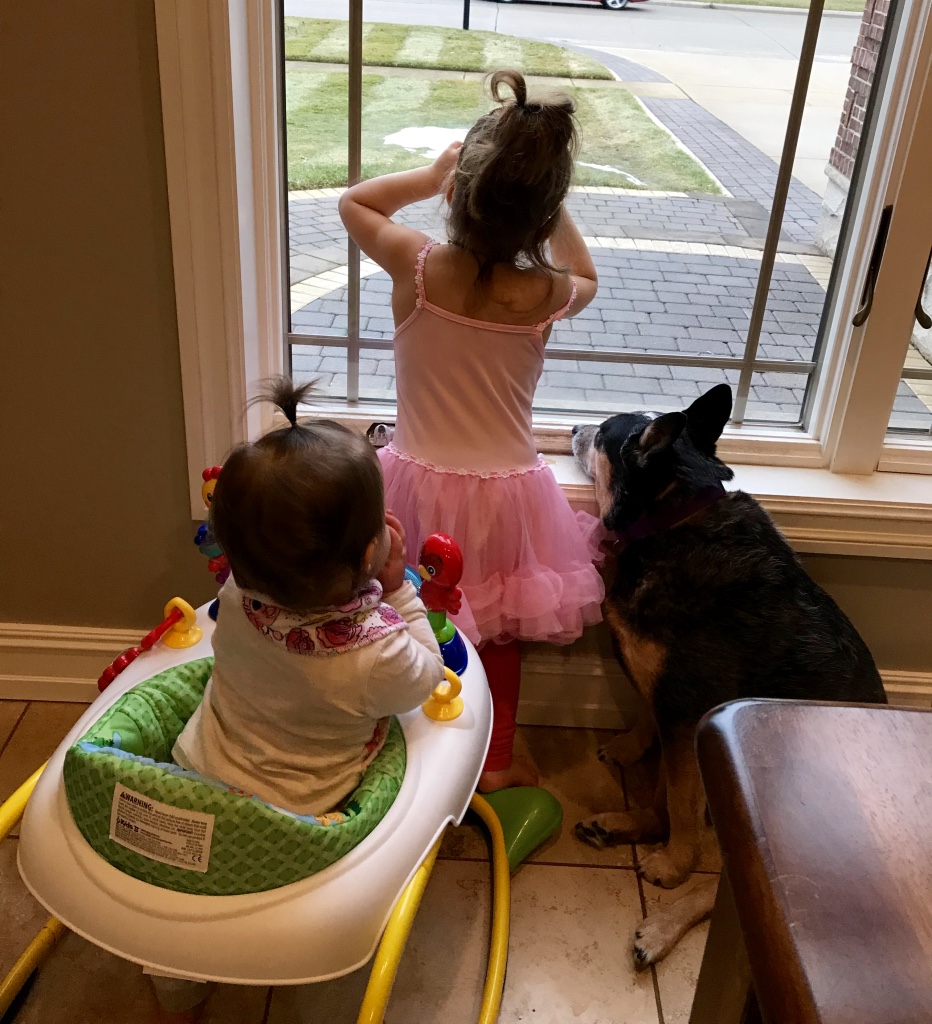 Lucy and Matty went to Holiday Market after dinner Friday night, so I decided to change Lucy’s sheet in her crib while she while she was gone . . . mainly so Miss Roses could have some time playing with all the stuffies in Lucy’s crib! She’s constantly trying to play with them, and Lucy is constantly taking them away from her. 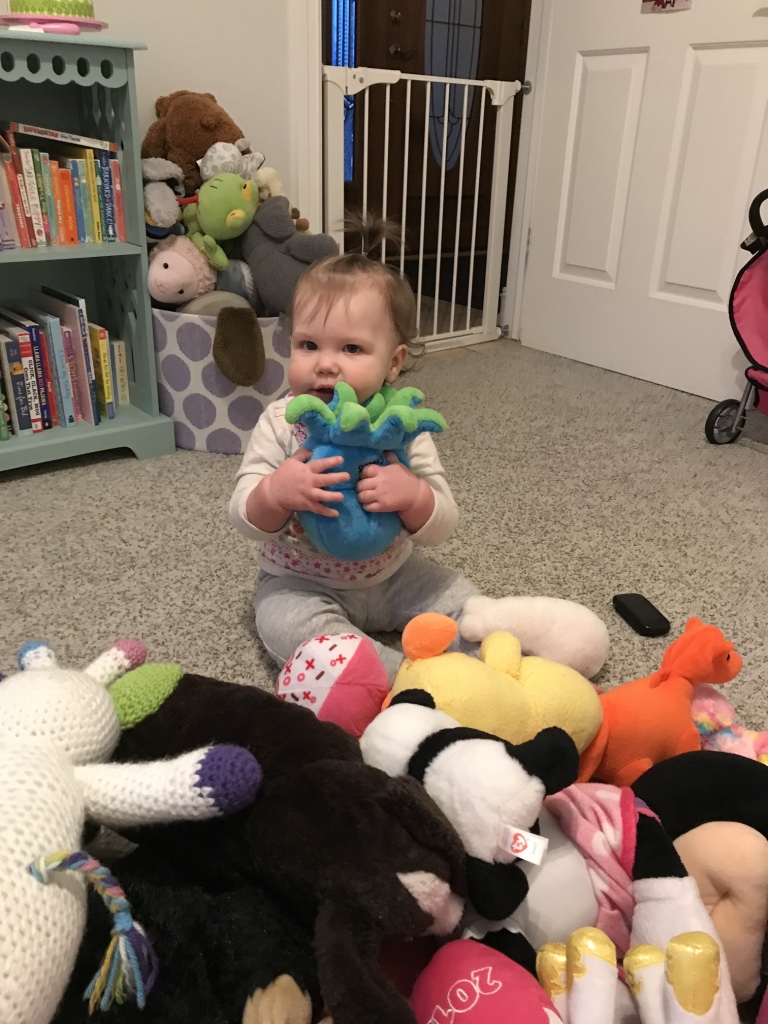 This one is a little blurry, but she was trying to snuggle all of them. 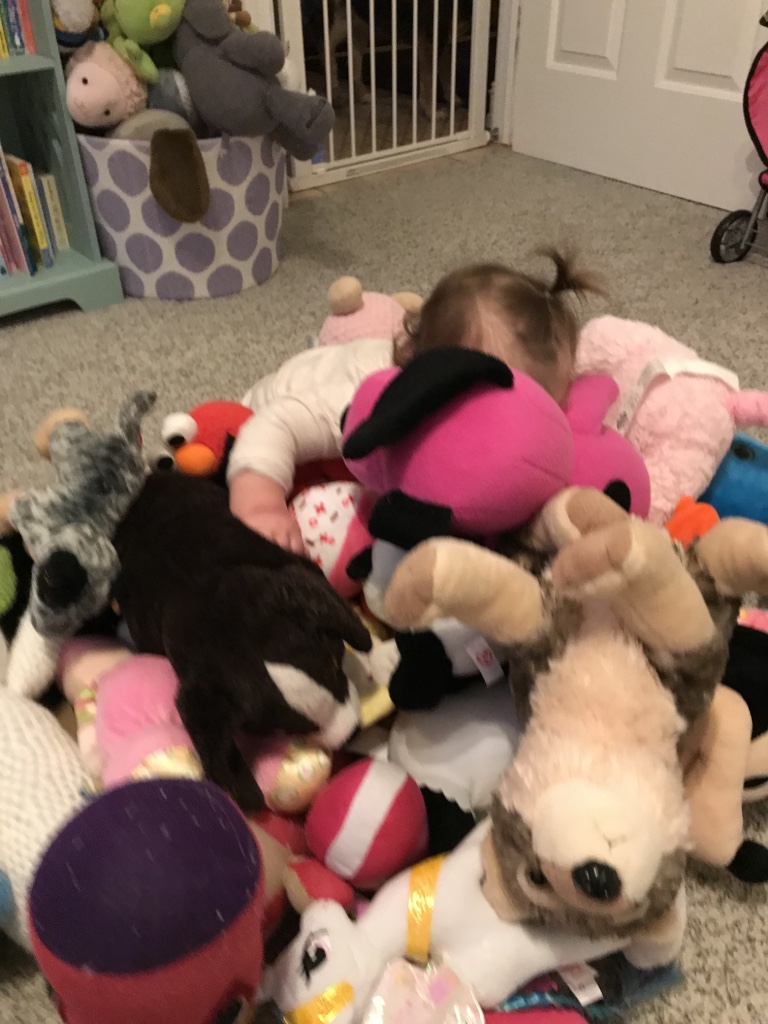 Emmy has been playing Peek-a-Boo lately, and it’s so cute! 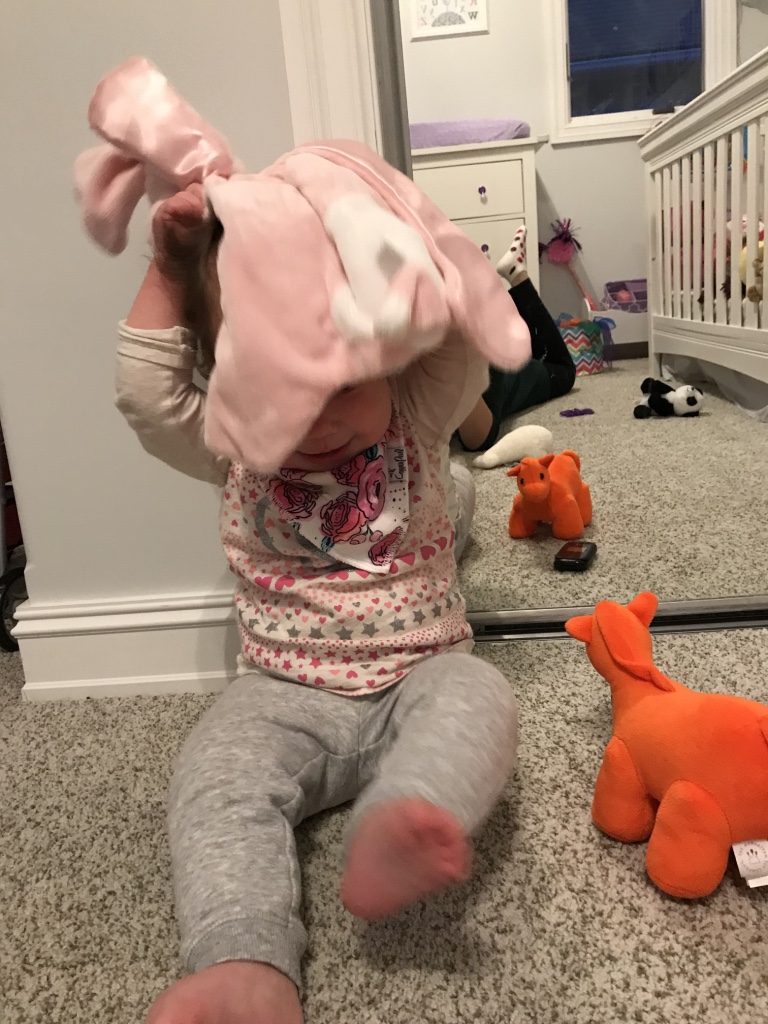 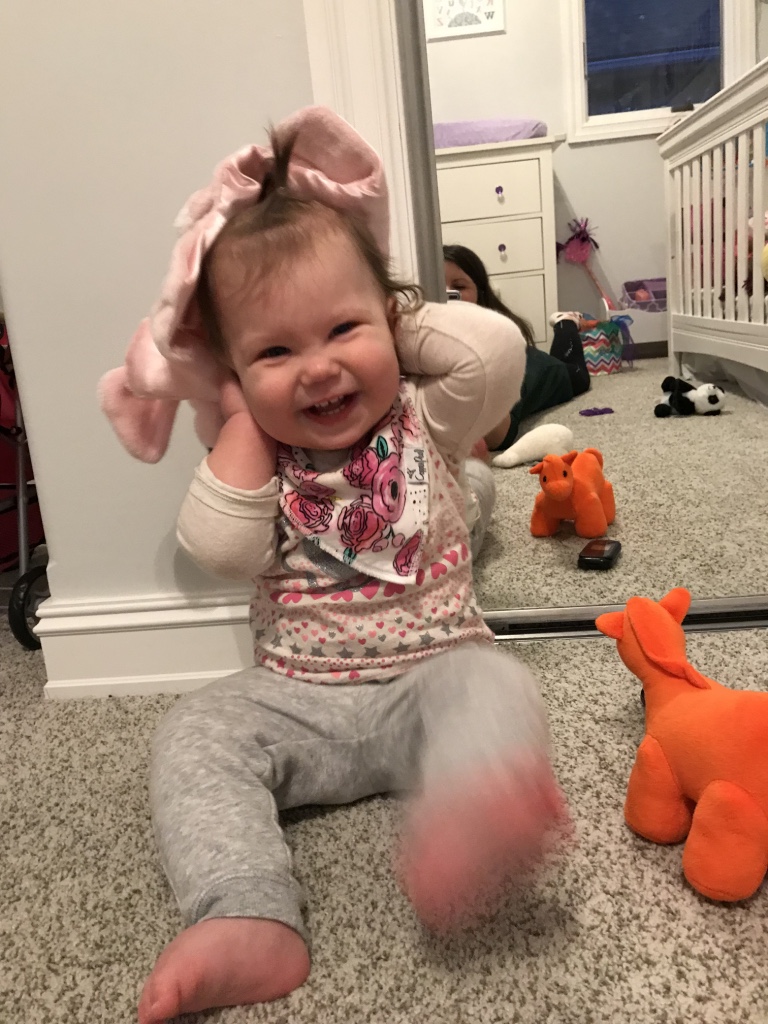 Lucy came back from Holiday Market with a purple balloon and had a great time letting it float to the ceiling in her room and then standing on her stool to get it. Don’t let anyone tell you that the Kissels don’t know how to party on a Friday night! 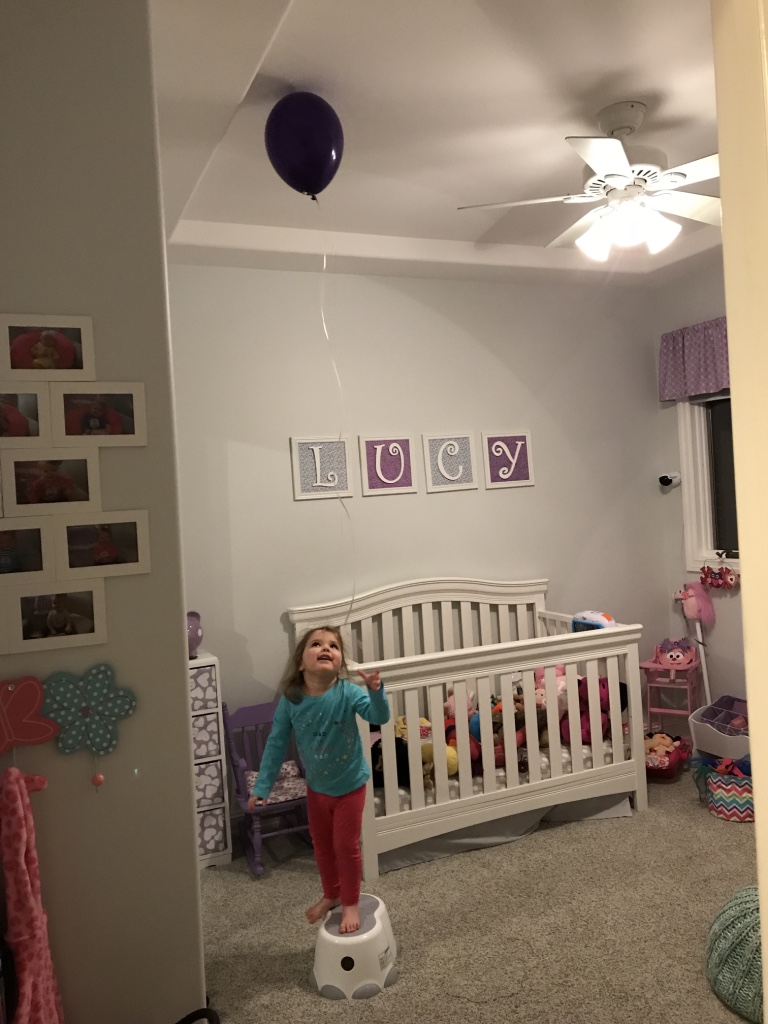 Emily’s pesky one year molars are working their way through, and she is not happy about it. She needed some extra snuggles after we put her to bed Friday night. Check out those curls!! 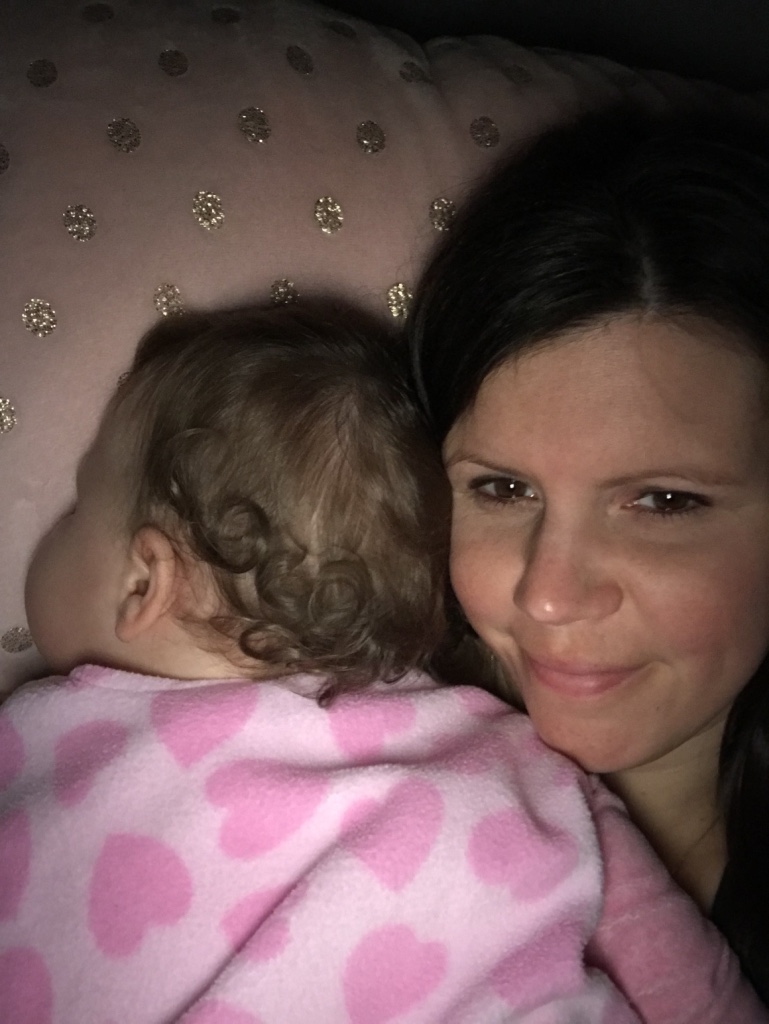 While I was snuggling my littlest baby, Carla was bowling with her biggest! They had a mother/son bowling event, which I think is a much better idea than a mother/son dance. 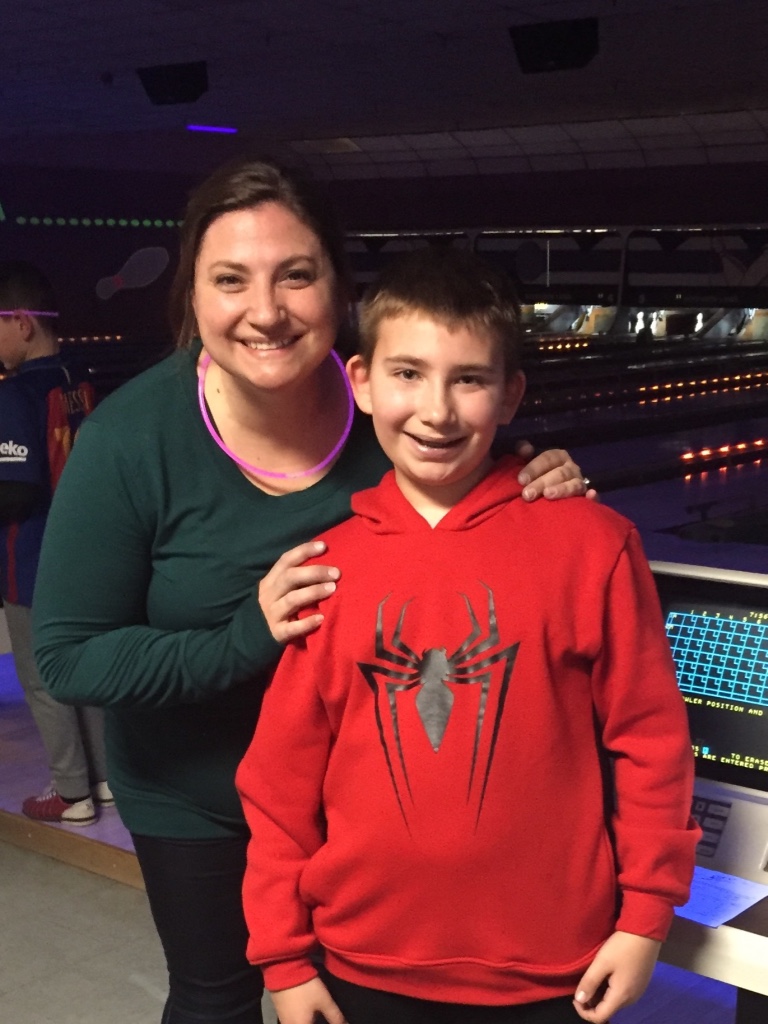 We spent all of Saturday morning working on purging and organizing our basement. It’s not fun, but it feels so good to get rid of all the stuff that’s just sitting down there for no reason! After a trip to the grocery store and some lunch, we decided we needed to get out and do something so we went for a lap around the park. 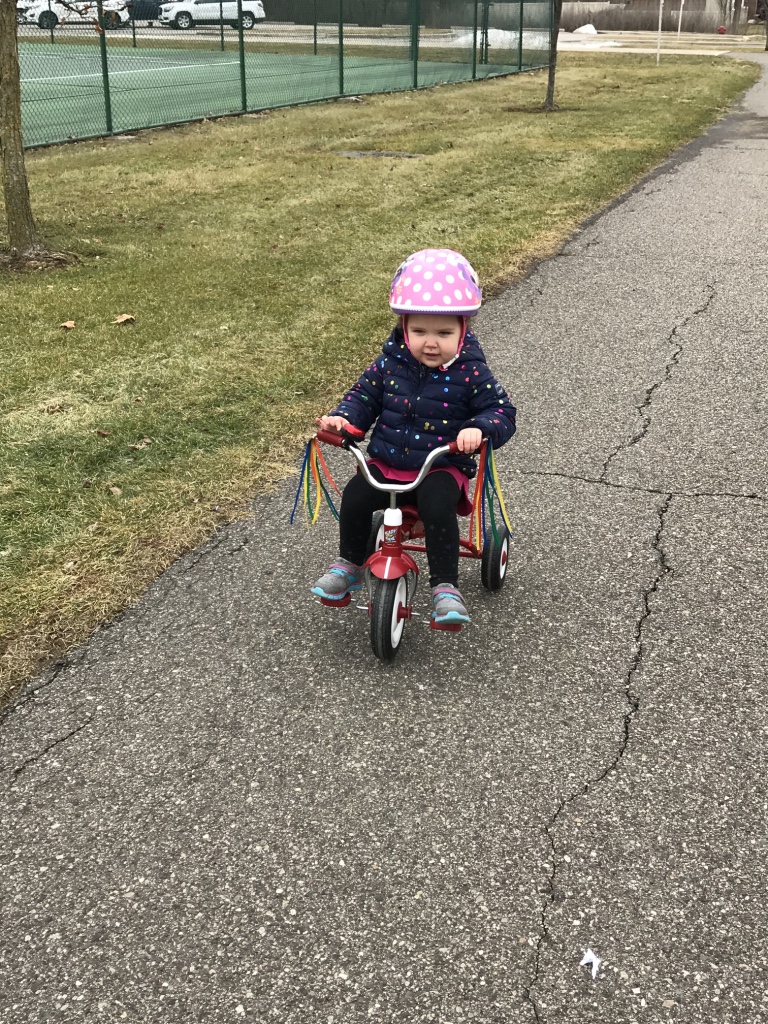 Lucy didn’t have her rain boots on so she couldn’t jump in the puddles, but she had a great time riding through all of them! 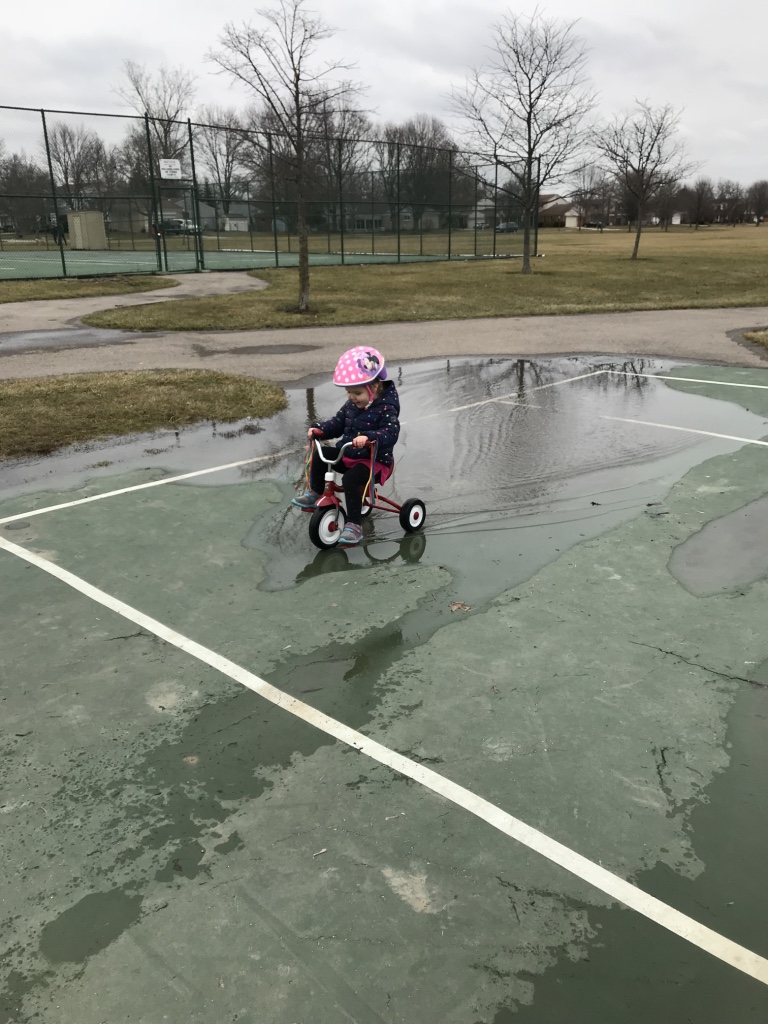 And then after a little rest time for Lucy and a hair appt for me, we were back at it again in the backyard. 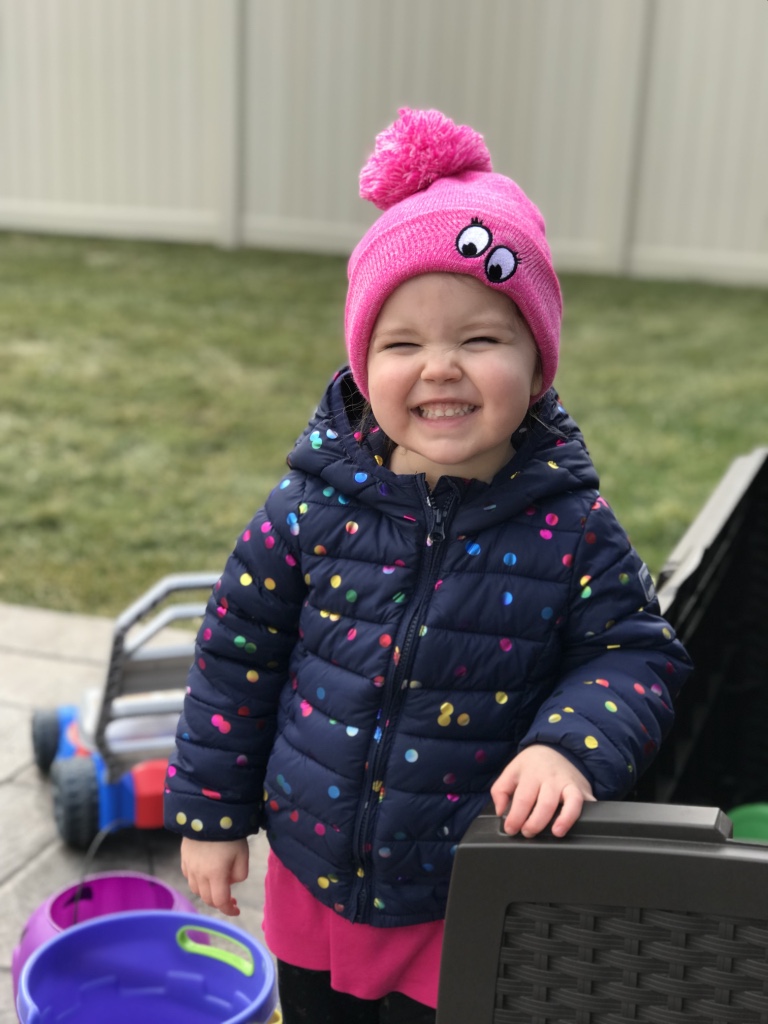 Matty was getting ready to give Ems her bath, but Lucy wanted to take a turn in her old baby tub. She thought she was so funny, and so did we. Don’t let anyone tell you that the Kissels don’t know how to party on a Saturday night! 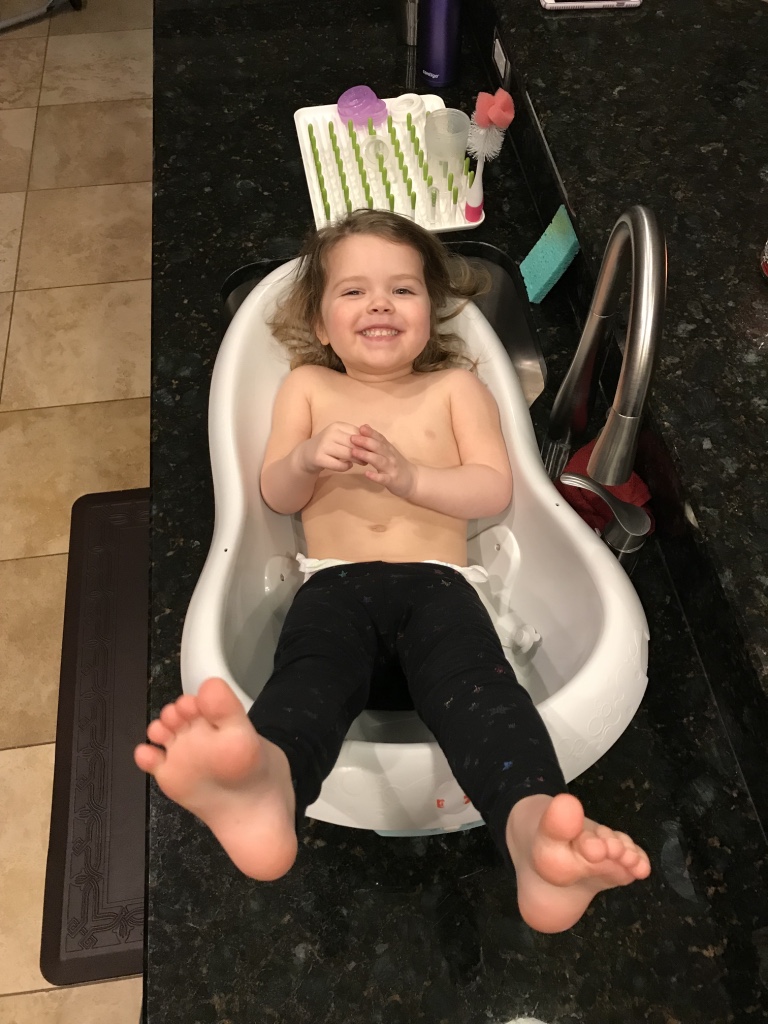 Ems has been really into taking things out of one container and putting them into another. Unfortunately, when she’s playing with the little kitchen, most of the objects end up in Sydney’s bed. 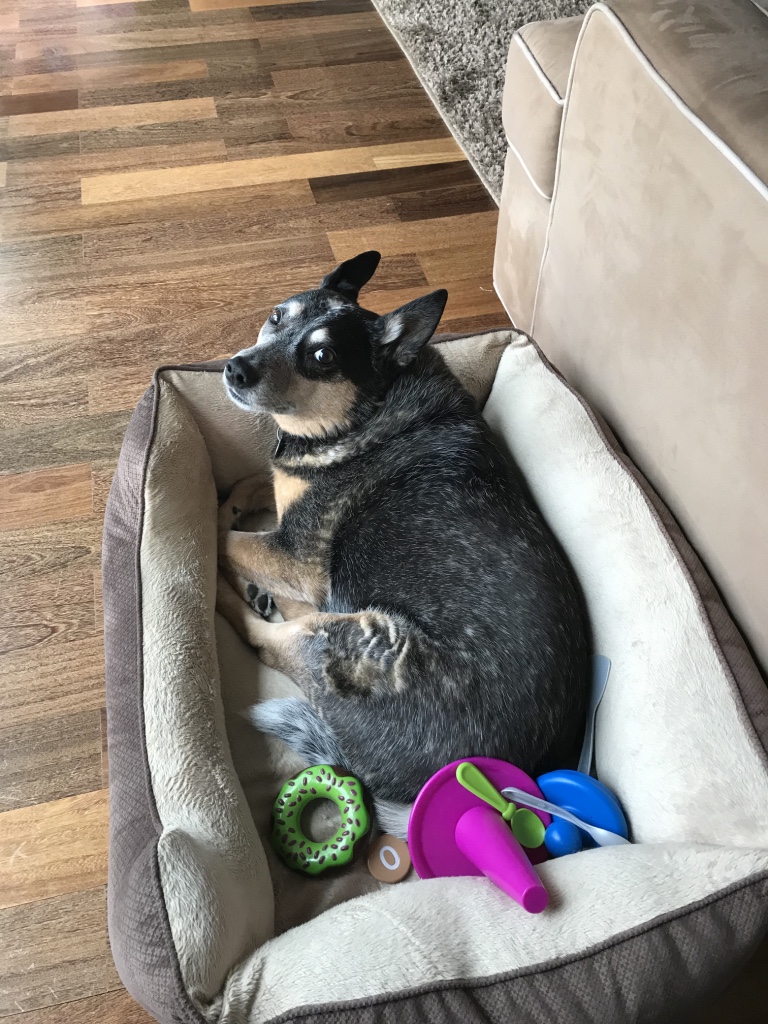 Sunday morning was more purging and organizing, and then in the afternoon we headed out to the house of one of Matty’s coworkers. They live in South Lyon, and Lucy fell asleep on the drive there. Also, she’s being attacked by the giant stuffed dog that Matty bought me when we were dating. I found it in one of our bins in the basement while we were purging! 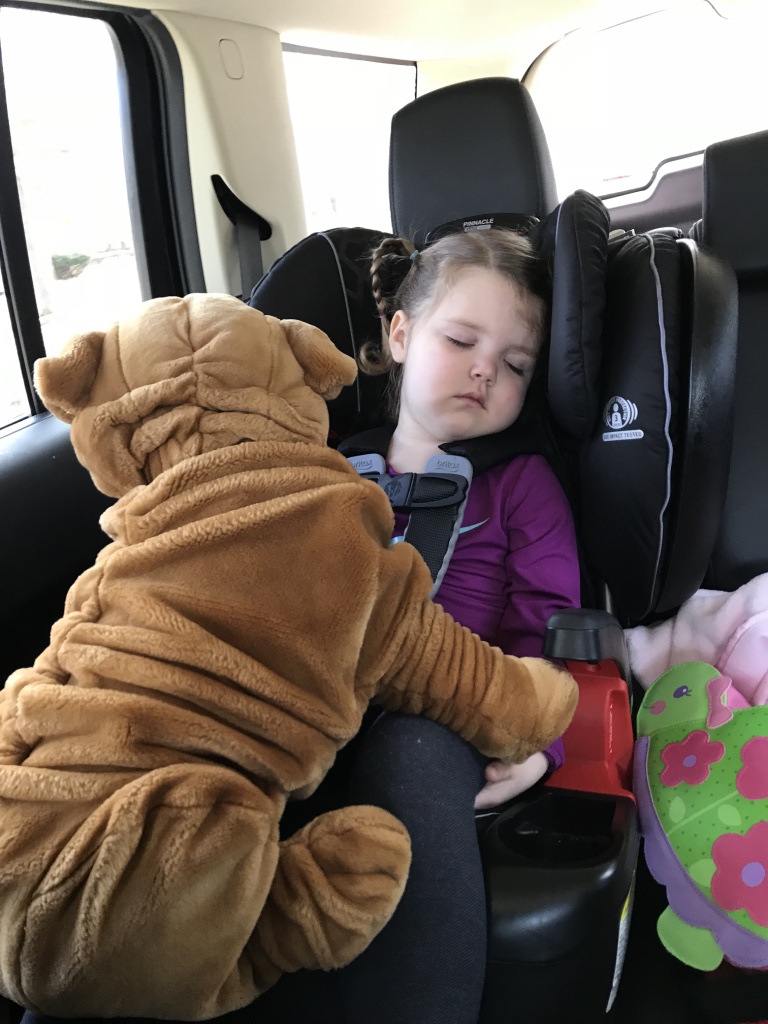 There was an open house going on in the same neighborhood that Matty’s coworker lives in, so we stopped by to check it out. There’s a five-year-old girl who lives at the house, and the girls made themselves right at home with her toys . . . with the realtor’s permission, of course! 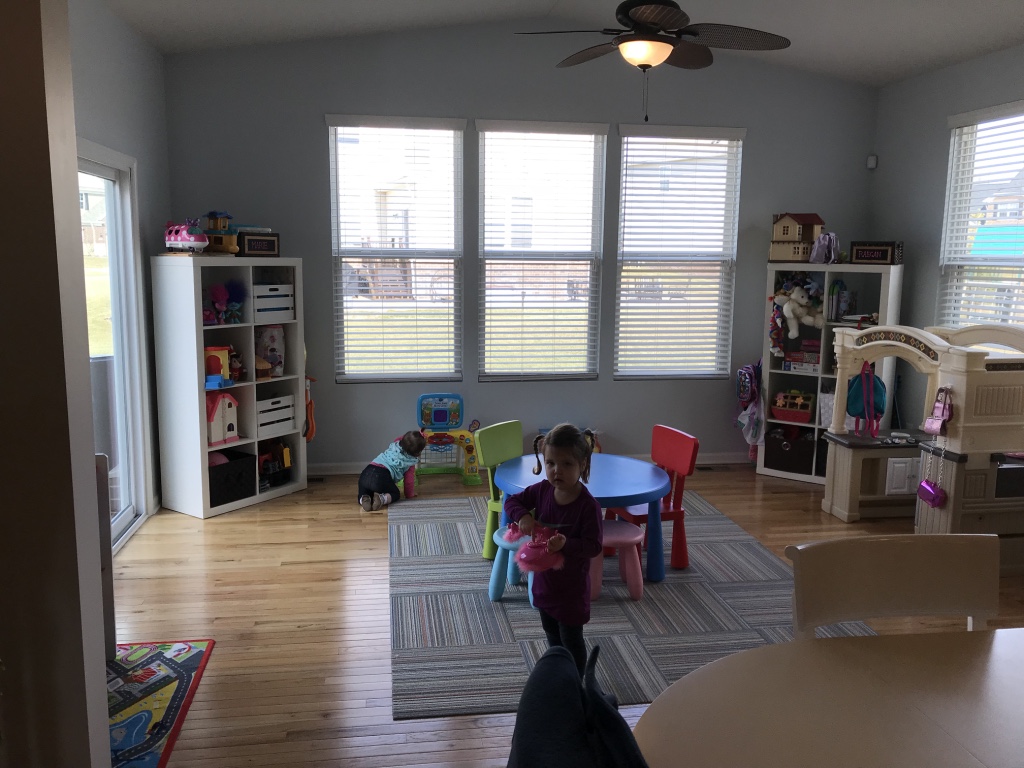 Lucy had a great time playing outside on the swing set during the gathering. 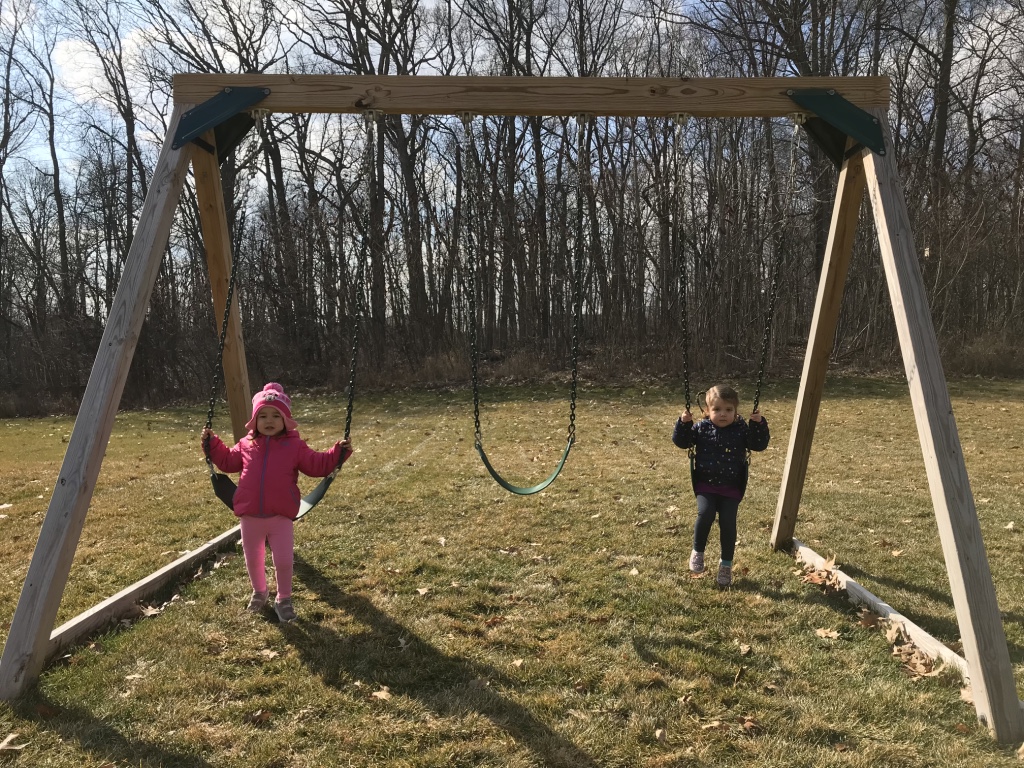 And she also dressed up and played so nicely with Matty’s coworker’s daughters. We were so proud of Lucy! 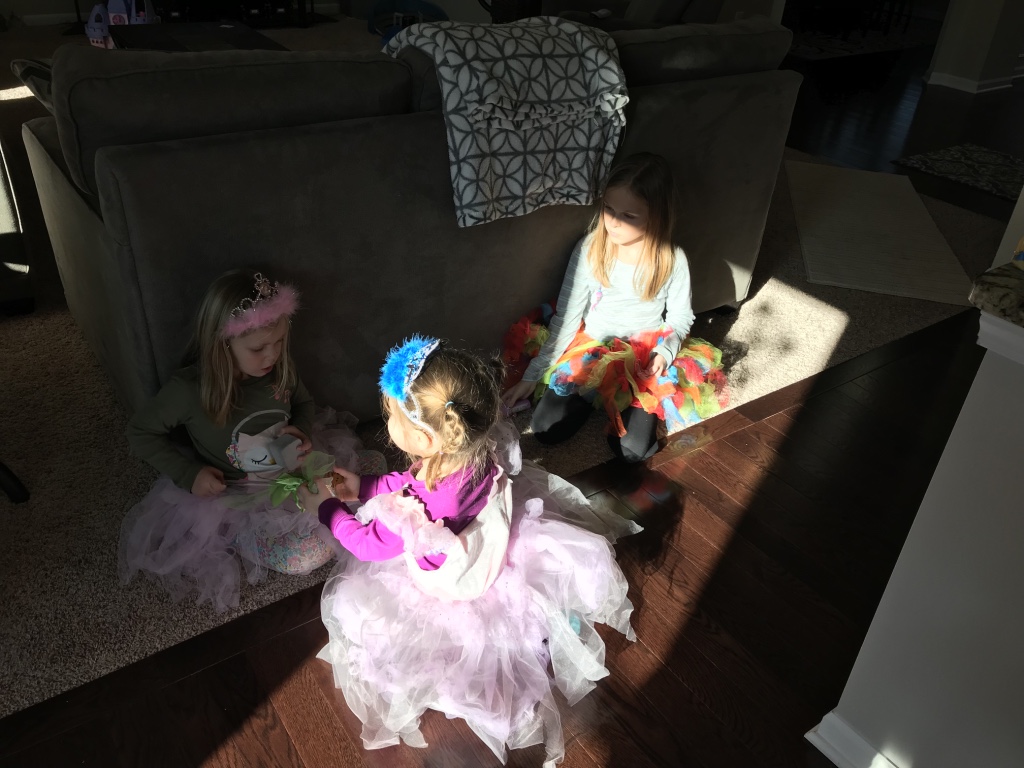 Thank goodness Ems hasn’t figured out stairs yet!  She really enjoyed playing at the bottom of them, though, and it was nice not to feel like I had to watch her like a hawk. 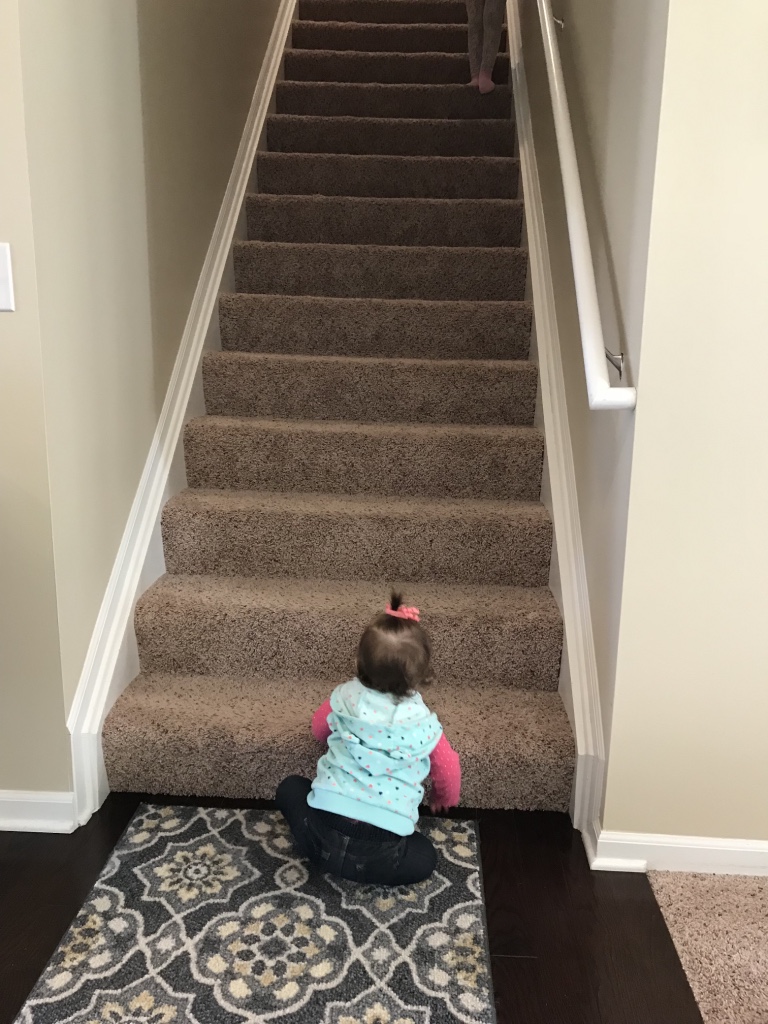 And that’s all she wrote! If you recall, we were supposed to be at our cottage this weekend, but that got cancelled because Sarah got the flu. We made good use of the unexpected time at home and got a lot done. It’s nice to feel accomplished at the end of a weekend. Super tired . . . but accomplished!
The weather is supposed to be great here on Monday and Tuesday. If you need us, we’ll be outside!
Have a great week!
XOXO