I had been looking forward to this past weekend for six weeks. Why? Because I had planned a Moms Night Out at my house for Friday evening, and the girls were all set to go to their grandmas’ houses for the night, and Matty was scheduled to go to a diaper party for one of his coworkers. Two thirds of those plans got cancelled because of stupid Snowmageddon!
Now, normally, I’d be pretty excited to get 12″ of snow because that doesn’t happen very often. But you’ll have to forgive me if I was slightly really annoyed that it happened on the ONE DAY that had been circled on my calendar for SIX WEEKS! #ugh
Let’s go back and start with Thursday morning. Lucy woke up bright and early and was able to give Matty some snuggles before he left for work. 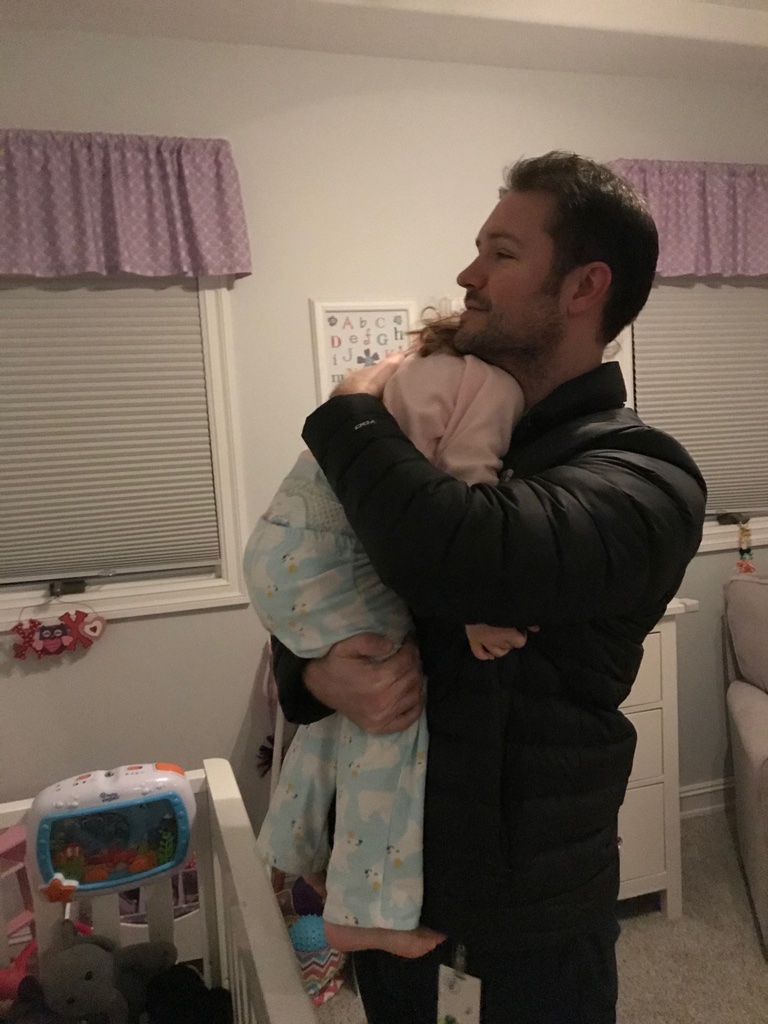 I said, “Girls, smile!” and Emmy knew just what to do! 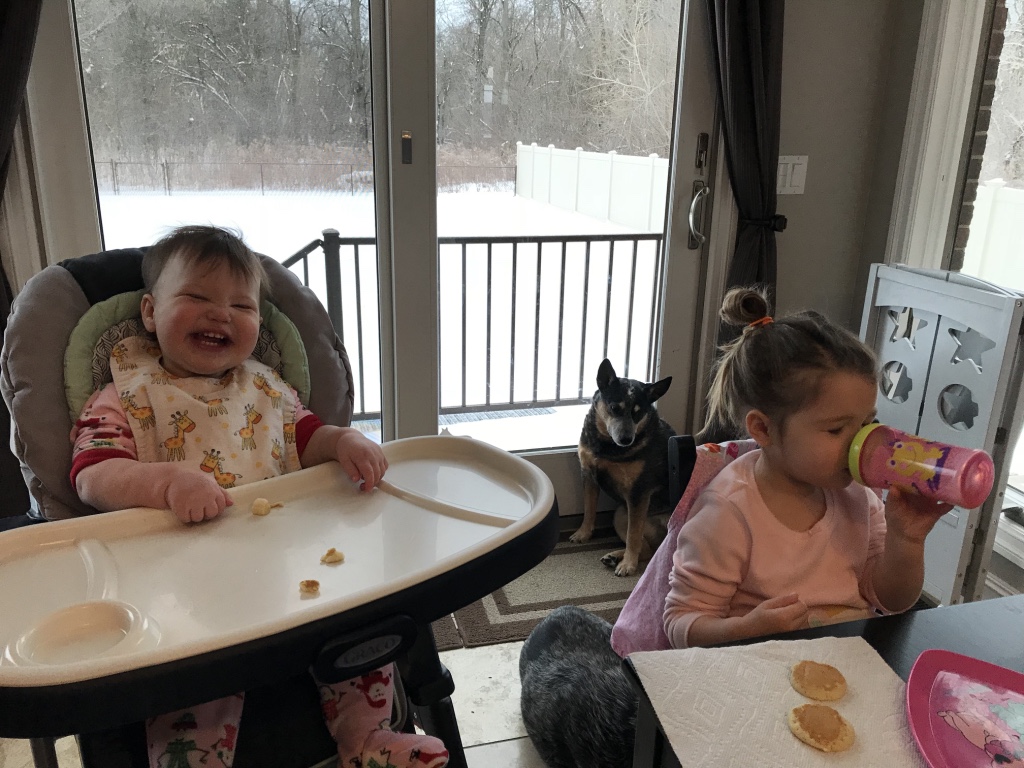 We were expecting a delivery from FedEx that I would have to sign for sometime on Thursday, and I was convinced it was going to arrive right in the middle of playing Beauty Salon with Lucy. 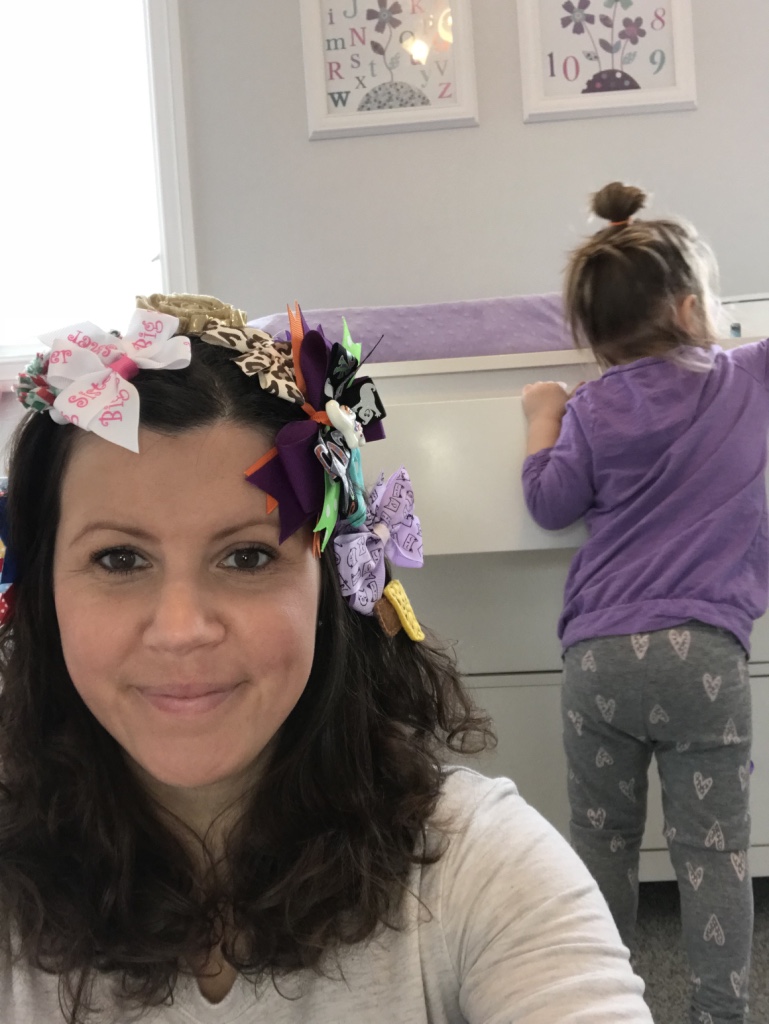 Luckily, it didn’t come until later so we had time to reverse the roles a bit and Lucy got to wear all the bows! 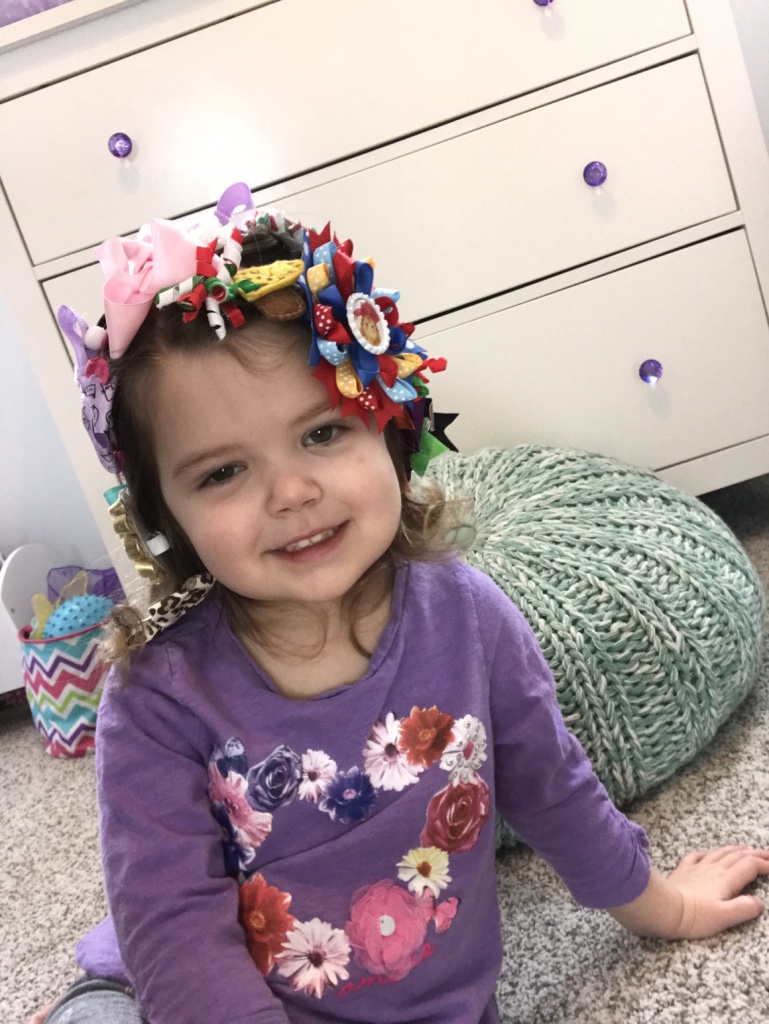 She was digging her new look and kept it in for about an hour or so! 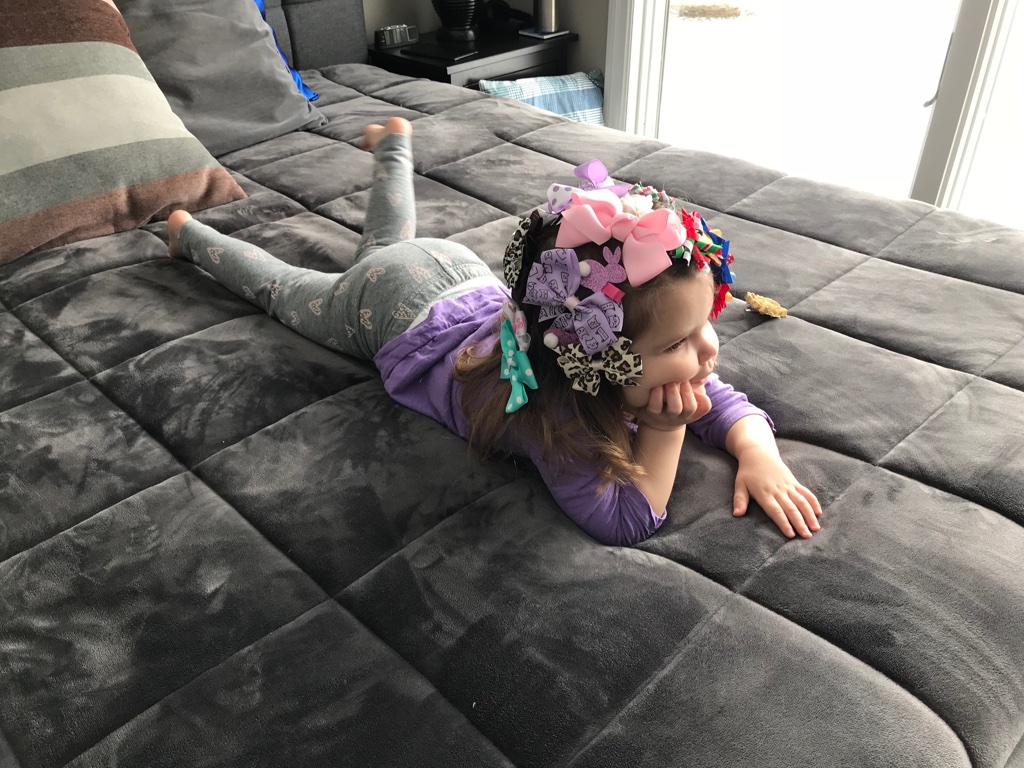 Lucy woke up last Monday morning with a really bad attitude toward Emily, and she road that train all week long. Then, we had unexpected snow and an unexpected doctor appointment Wednesday morning, which meant the errands I had planned to do had to get postponed. I had Rita come over Thursday to watch Emmy so I could try and knock out as many errands as possible with just Lucy. She was a real trooper, but couldn’t quite hang in there for everything I needed to do.
We arrived home from our errands just in time to see the FedEx truck pull up. The super helpful delivery man (sarcasm font) told me that he wasn’t going in our house or our garage. In fact, I think his exact words were “I ain’t going in your house. I ain’t going in your garage.” Matty had ordered a gigantic new TV . . . and this guy wanted to leave it on our front porch in the snow! I finally convinced him to push it in the garage, but he wouldn’t even do it far enough for me to close the door, so I had to do the rest myself. He told me if I was so concerned about the delivery of the TV then I should have had someone else deliver it. Thanks a lot, FedEx!
So anyways, to continue our fantastic week, I had planned on baking two batches of chocolate chip cookies for an event on Saturday while Emmy napped . . . but Emmy wouldn’t nap no matter what I tried! And then I went to change her diaper and didn’t make Lucy come with me . . . and this is what I found afterward! Lucy said, “I don’t know what happened. It just kept coming undone and I couldn’t stop it!” #welcometomyweek
Those are my address labels, btw. 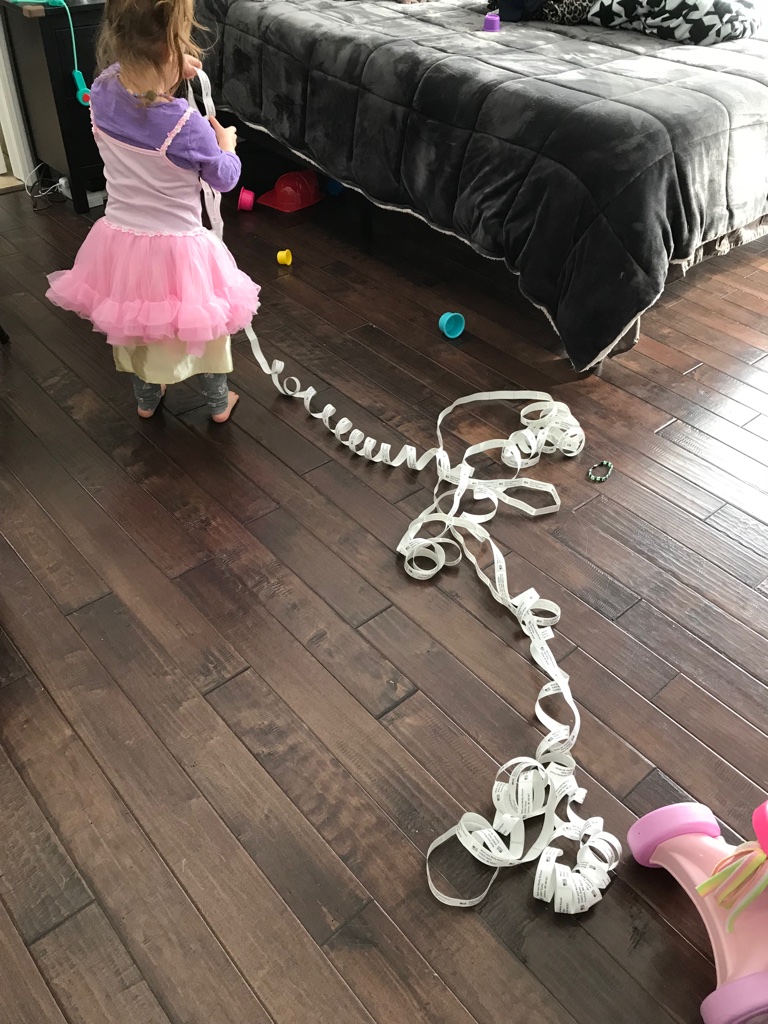 This sweet little girl can cheer me up anytime, though. Even if she doesn’t nap! 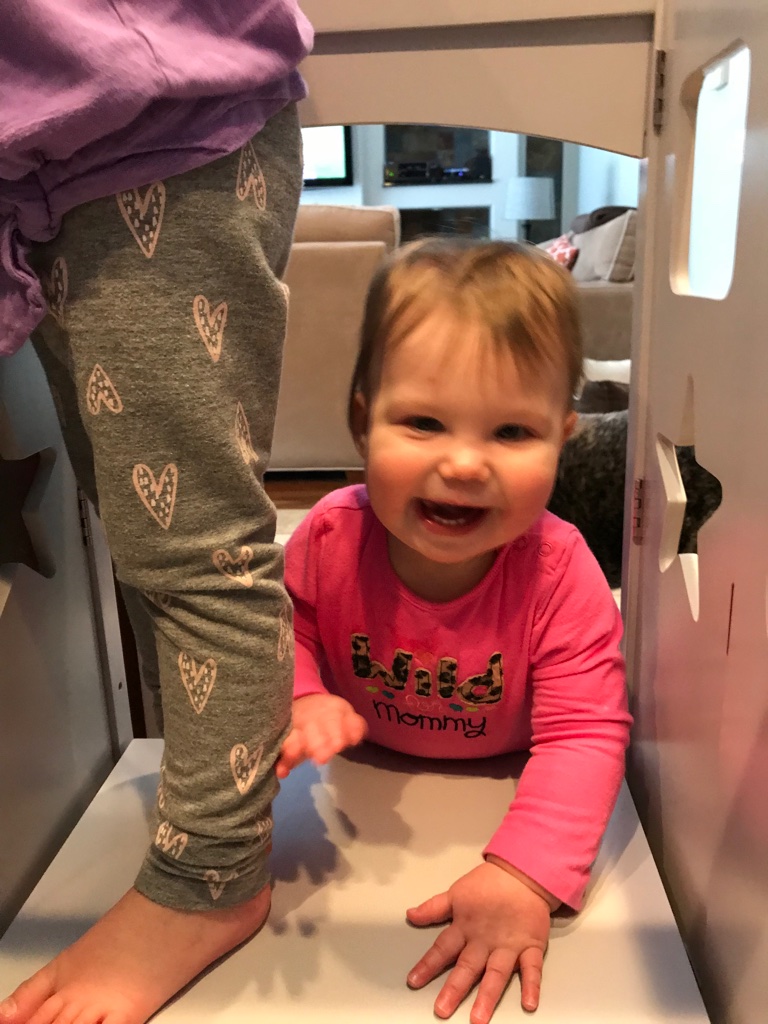 Apparently, Lucy was just as excited about our new TV as her daddy was and couldn’t fall asleep Thursday night! We let her lay on our bed and watch Moana on the new TV for a bit, and it was actually kind of fun to have a little alone time with her in the evening. 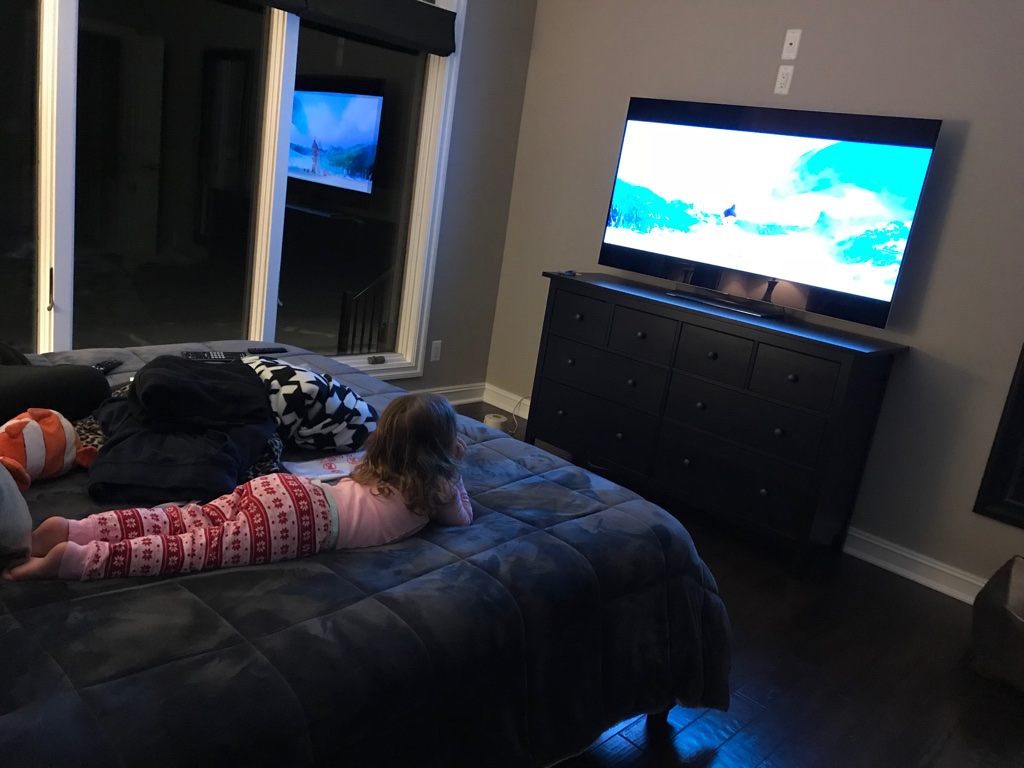 And then Friday morning arrived and so did all the snow! All the schools were closed, Matt’s office was closed, the city offices closed . . . and my moms night out party was not looking promising. Come hell or high water . . . or 12″ of snow . . . Matty was getting the girls to their grandmas, though! He doesn’t mind driving in the snow, so we loaded them up and were out the door by 9am because the snow was scheduled to get worse as the day went on. This was us blazing a trail on the highway. No traffic . . . but no lanes, either! 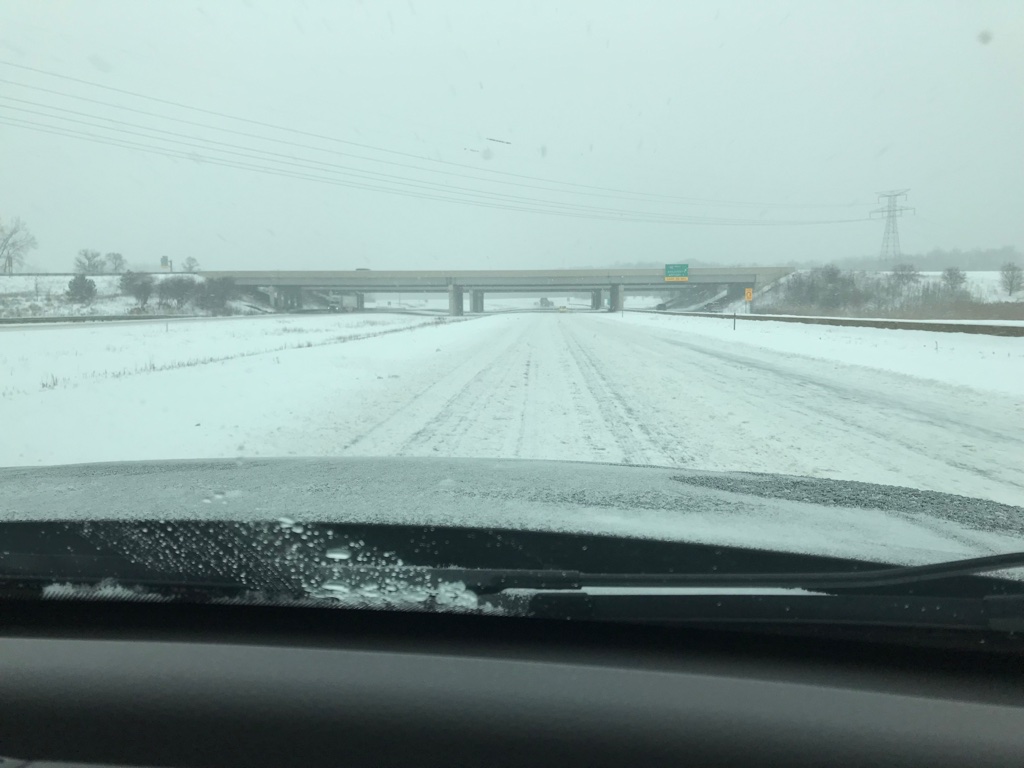 Alas, the mamas weren’t able to make it to our house, and Matty wasn’t able to make it to the diaper party. So we ended up having a quiet afternoon at home before meeting some friends for dinner. It was very nice and relaxing . . . but I was REALLY looking forward to hanging out with my friends without the kiddos around!
We picked up the girls pretty early on Saturday. Matty and Lucy tried to play in the snow, but Lu was having a hard time moving around because there was so much so they came back in for some rest time on our bed instead. 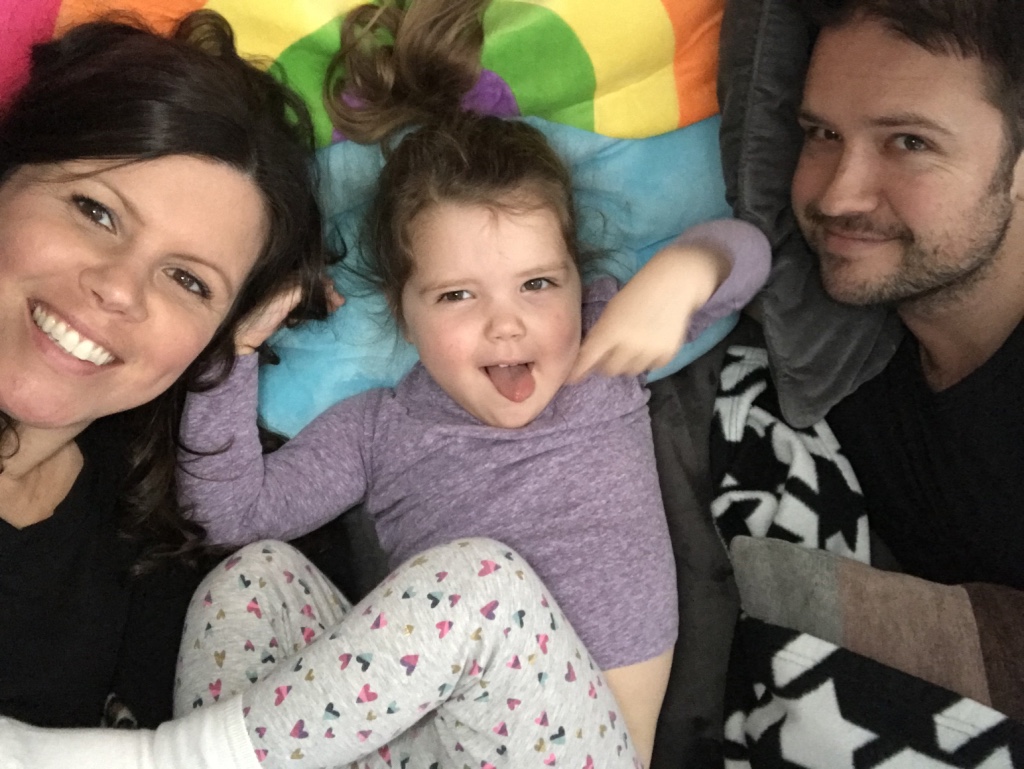 This little lady needs to slow down! She now can pull herself up to a standing position. I am not ready for her to start walking! 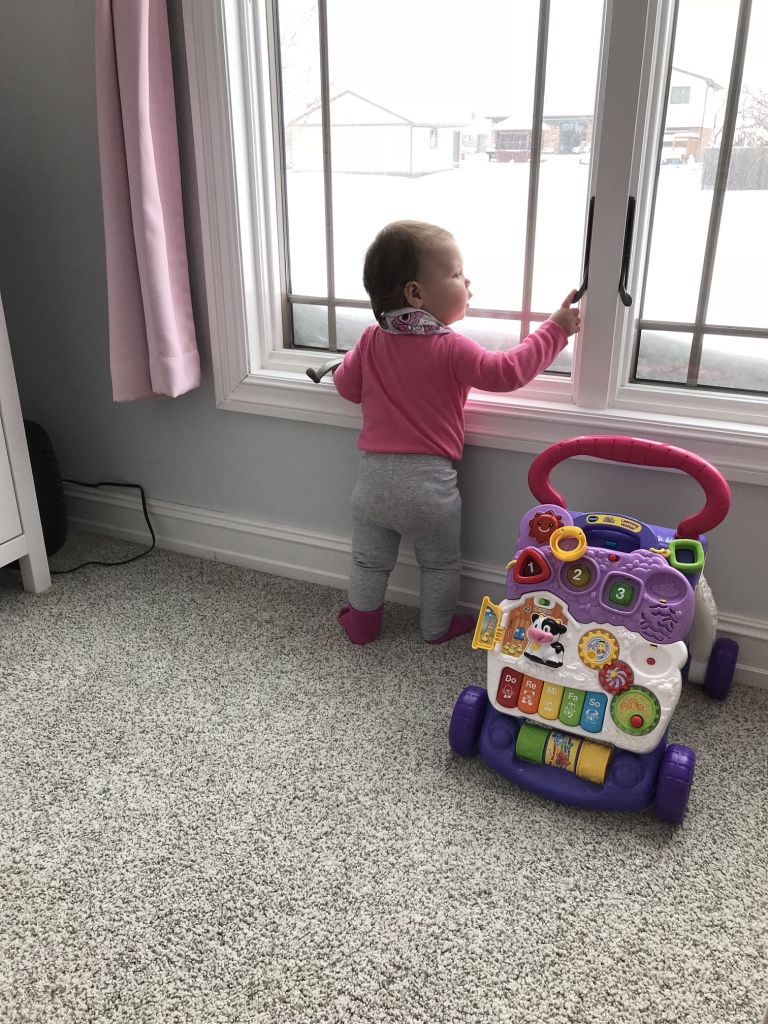 Lucy and I worked on her Valentines for school. She picked out ones with dogs and cats and did a great job “writing” her name on them. 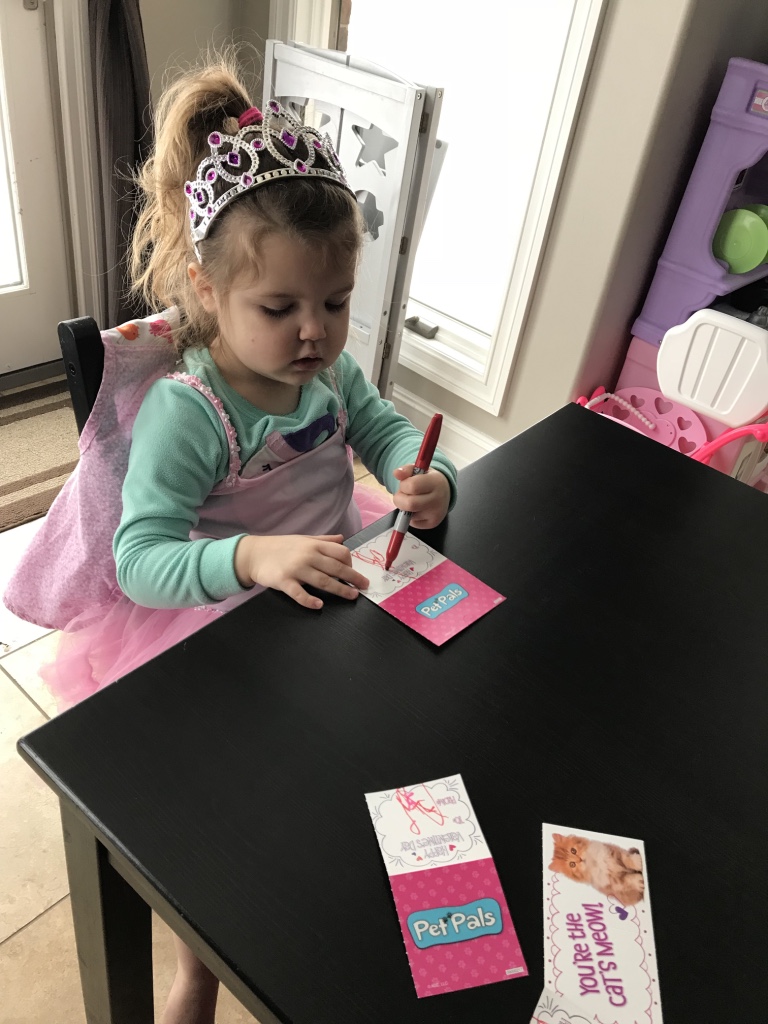 And Miss Roses was nothing but smiles at the grocery on Sunday. I’d be happy, too, if I got to snack my way through grocery shopping. 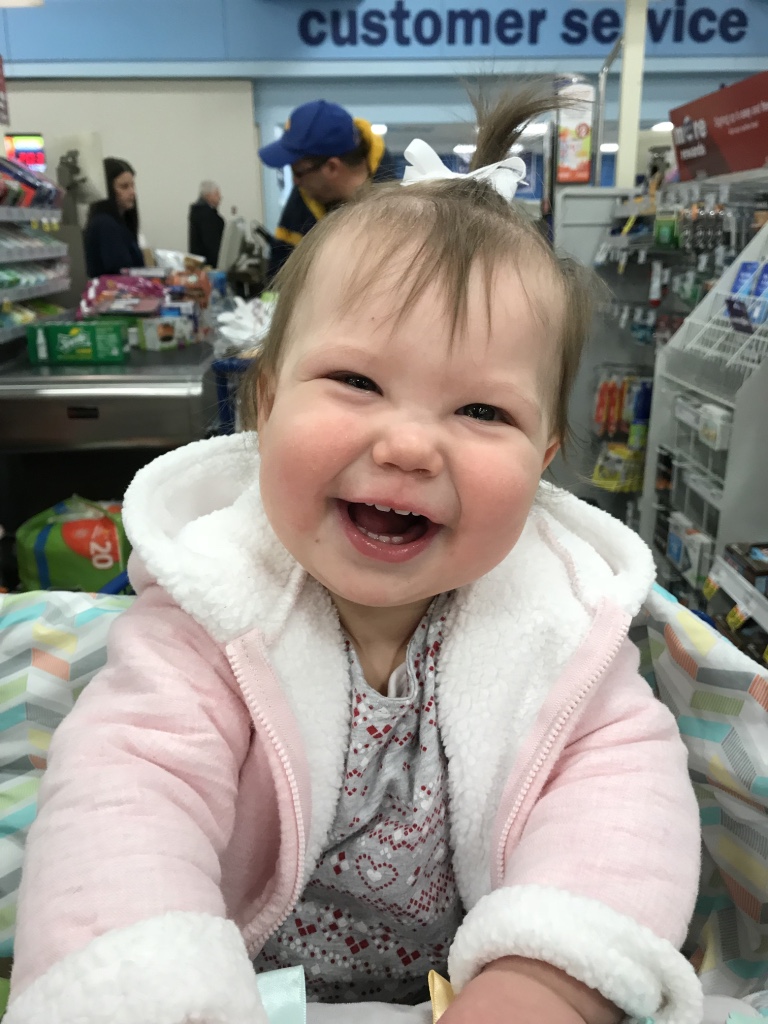 Even though I was disappointed about Friday night, we did end up having a nice, relaxing weekend. Last week was pretty challenging, so I feel like this week has to be better! I’m going to do my best to start it off with a positive attitude and a truckload of patience.
I’m looking forward to Lucy’s Valentines Day party at school on Tuesday and then having a special little day with my loves on Wednesday. We’ll be baking heart shaped things, for sure!
Have a great week!
XOXO