Not for us, thank goodness! #knockonwood
We were supposed to meet Sarah, Brian, Tommy, and Eleanor at the cottage this weekend, but poor Sarah started not feeling well on Tuesday night, was officially diagnosed with the flu yesterday, and is out of commission for 48 hours. After we made the stomach flu a family affair a few weeks ago, we aren’t messing around with the real deal flu . . . so our cottage weekend got cancelled.  🙁
In other news, Lucy spent a good amount of time “fixing” Emmy’s activity table. This little lady is definitely an engineer in the making. 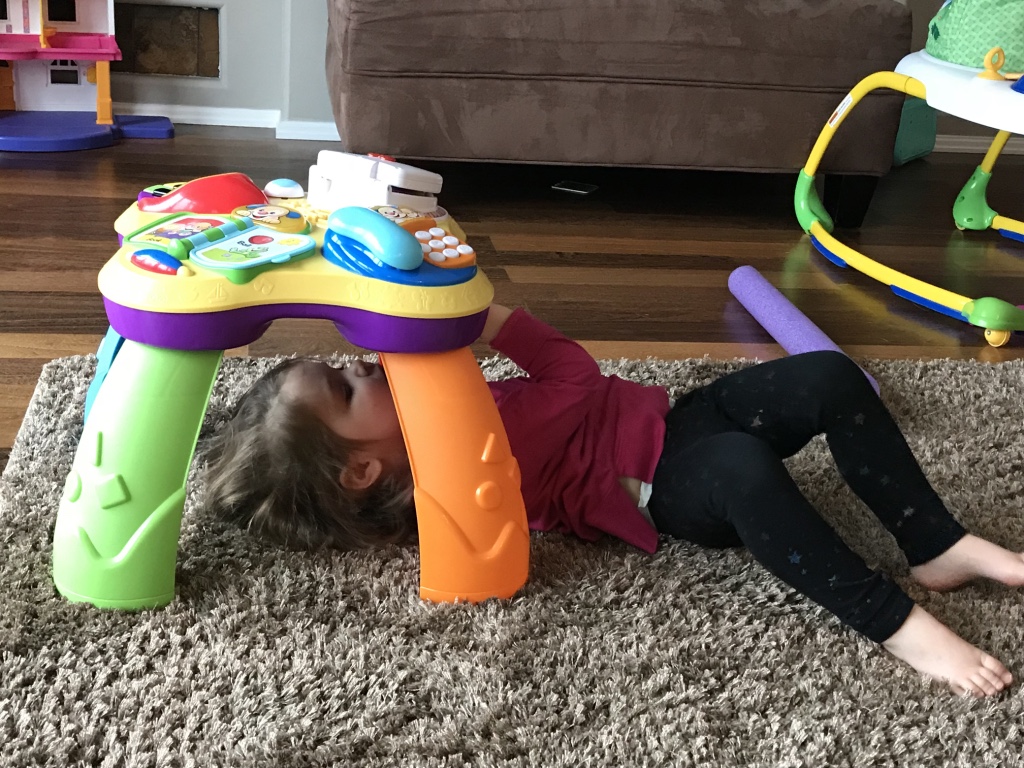 Emmy loves her pacifier, but we never give it to her outside of her crib. It’s for naps and bedtime only. I think she’s starting to compensate by carrying this pancake around in her mouth! I took this picture the other day after she had been carrying it around like this for ten minutes! 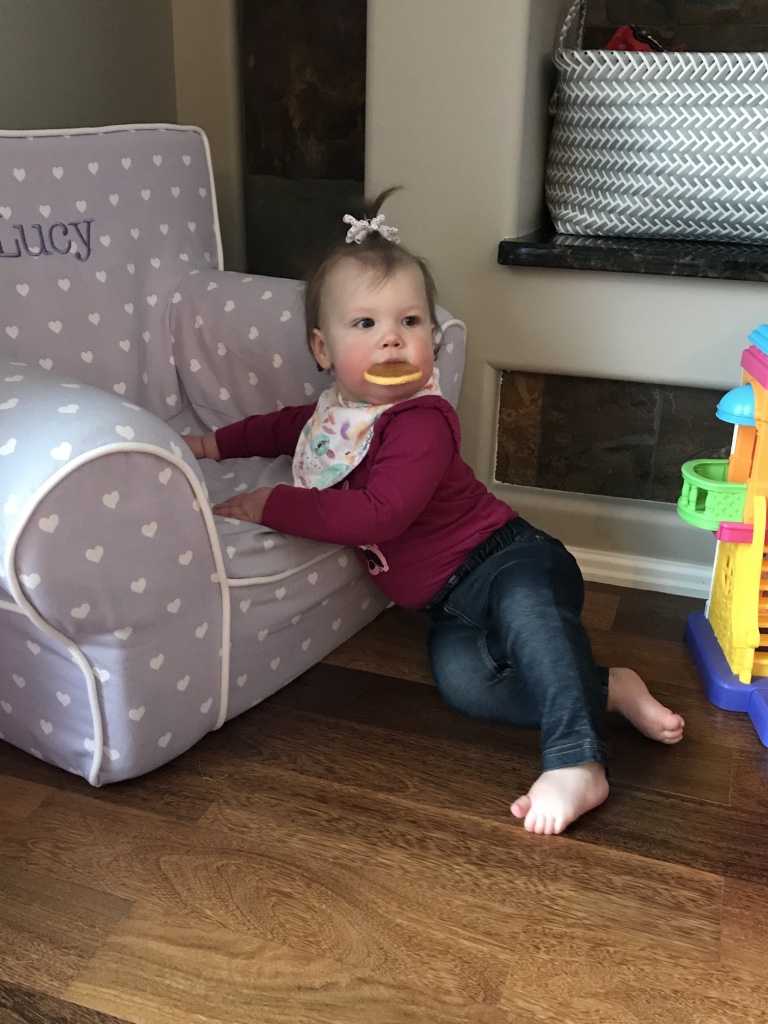 The cutest little kitchen helper ever! 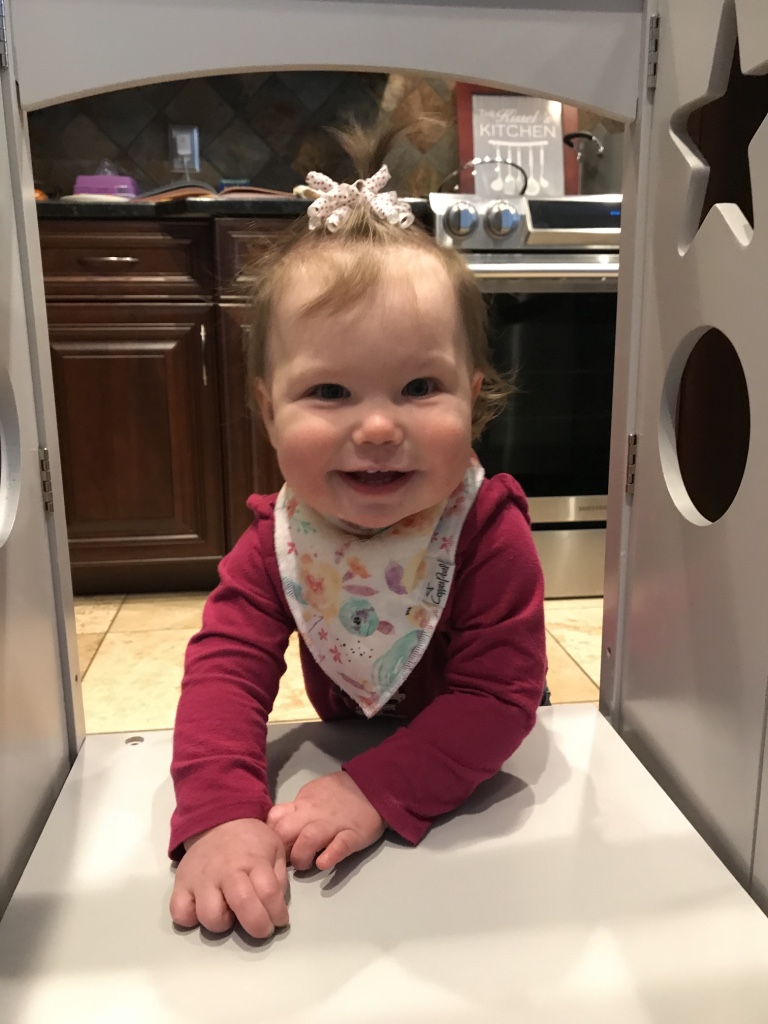 Lucy’s school had a field trip to Funtastic on Tuesday, which is one of Lucy’s favorite places ever. This isn’t the greatest picture of her, but I included it to show how curly her pigtails were! It was warm, rainy, and humid on Tuesday. Super weird for February . . . but her hair knew exactly what to do. #shegetsitfromhermama 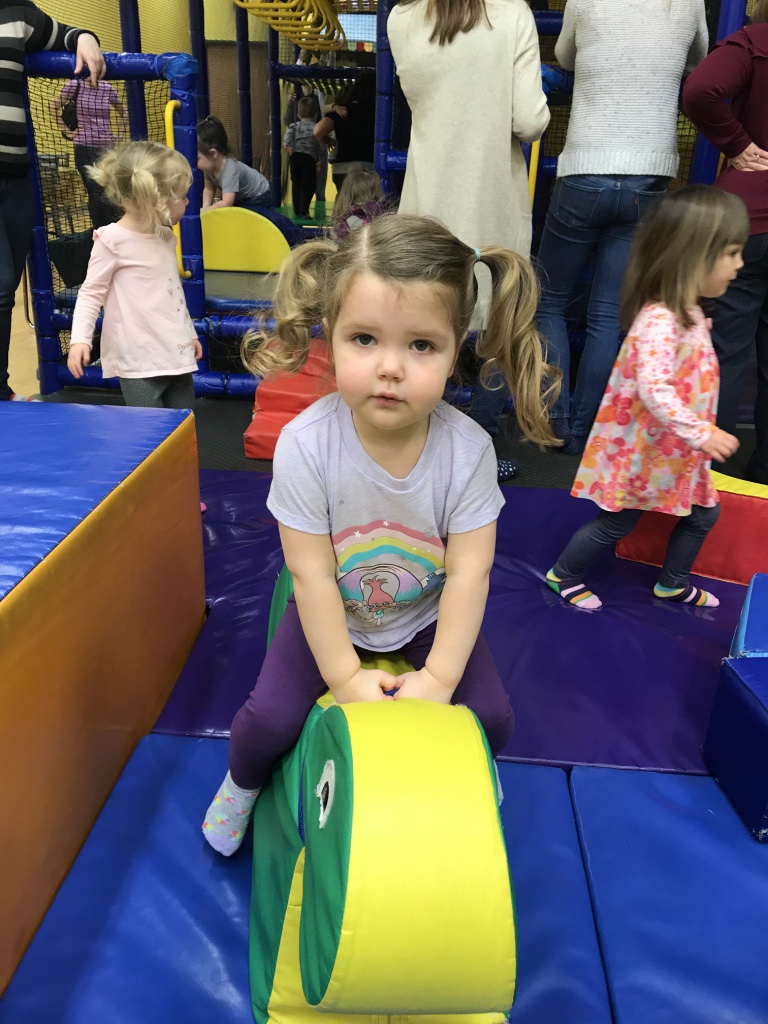 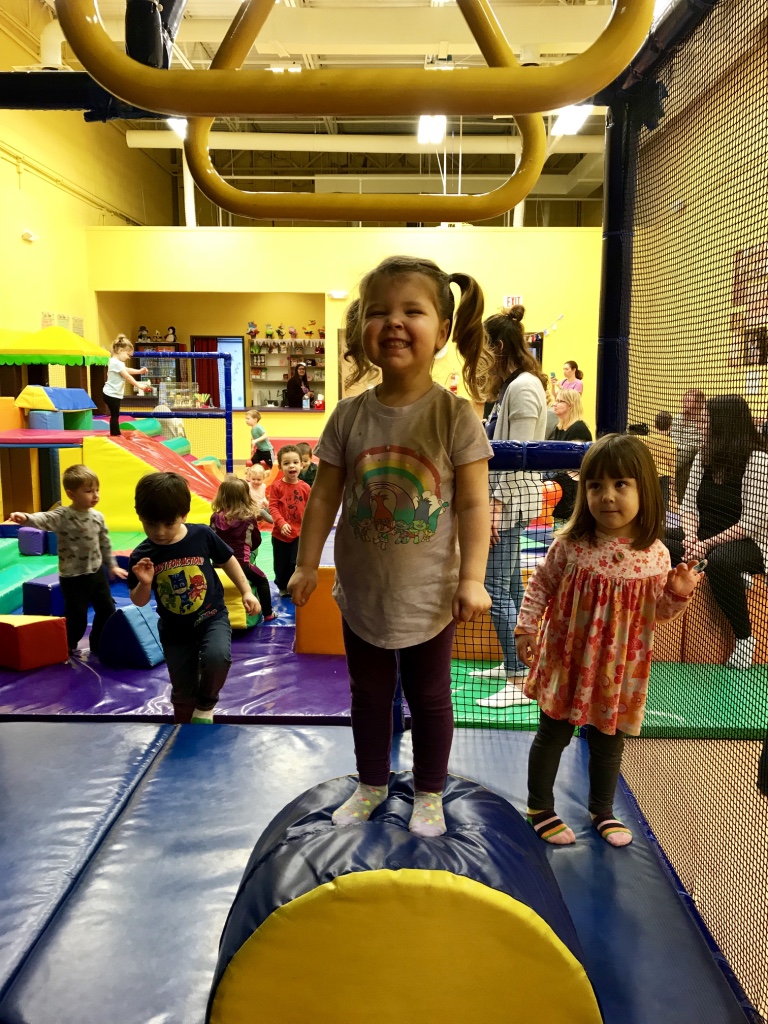 This was a two hour field trip, and all of the classes from Lucy’s school were invited. She gets really overwhelmed with a lot of people, so I expected her to only last a little bit. Well, she surprised me and we stayed the whole two hours! She was a little clingy for the first half, but by the end (of course!) she actually went up to her classmates and asked them if they wanted to play with her. It was the cutest thing ever, and I was so proud of her! 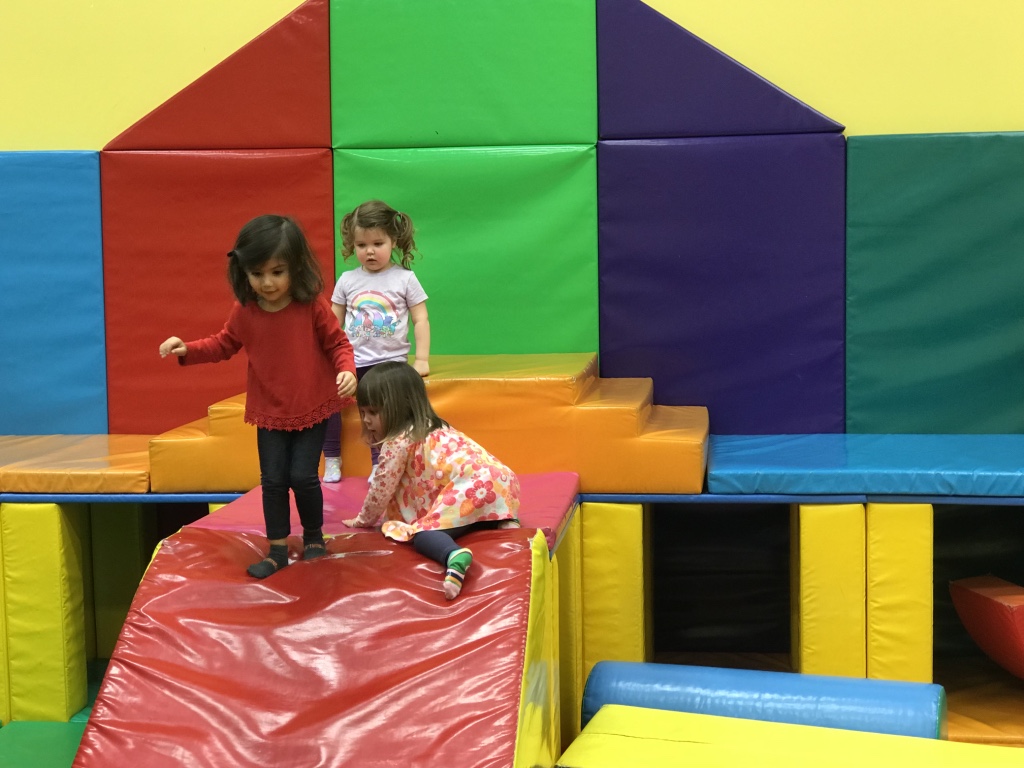 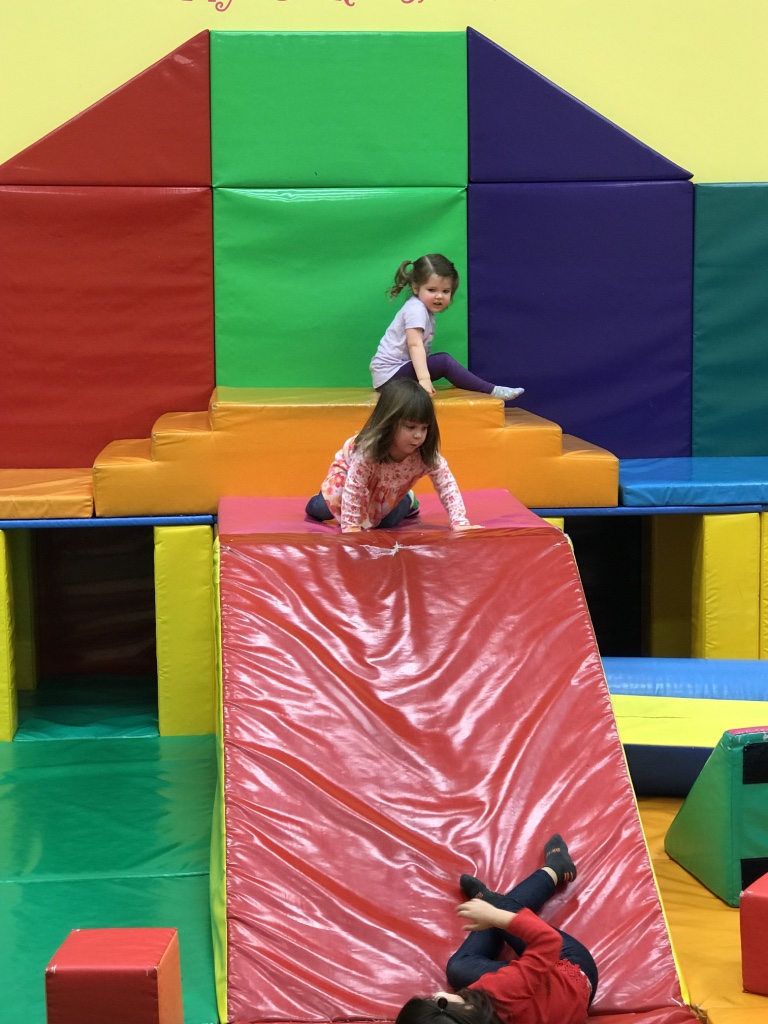 Lucy found a little sequin heart on the ground and was showing it to her friend Ana. 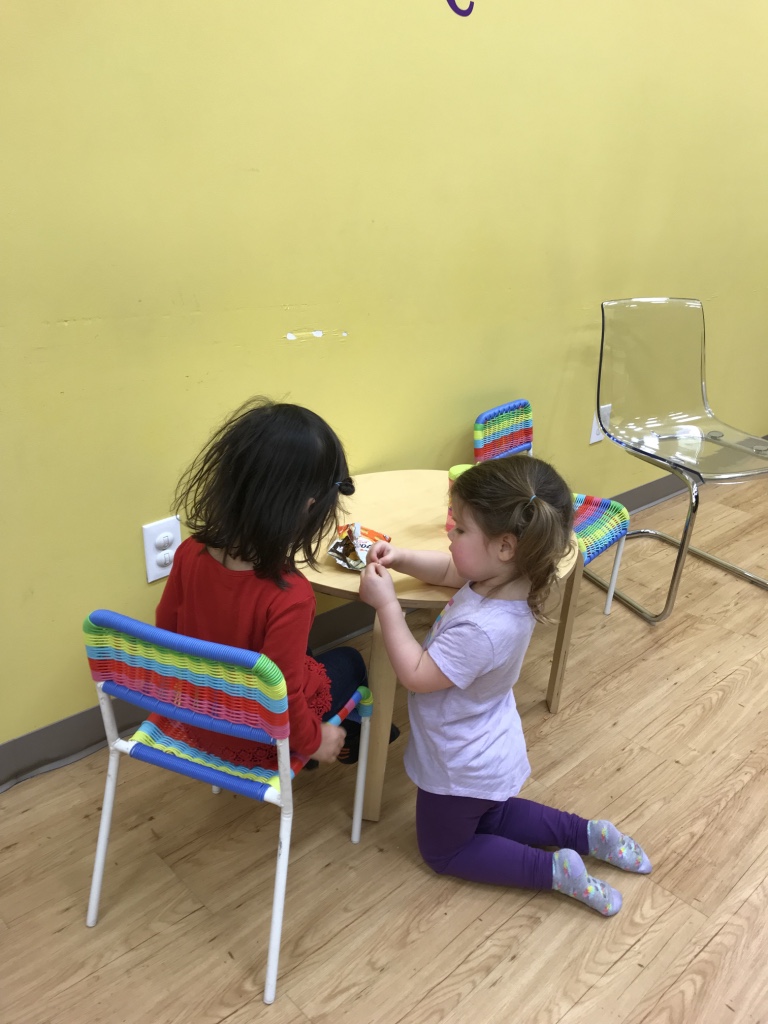 Our grill isn’t out yet, but the weather was so mild on Tuesday that Matty took our cast iron skillet outside with our hot plate and made some hamburgers. It was done raining by dinner time, but Lucy need her umbrella just in case! 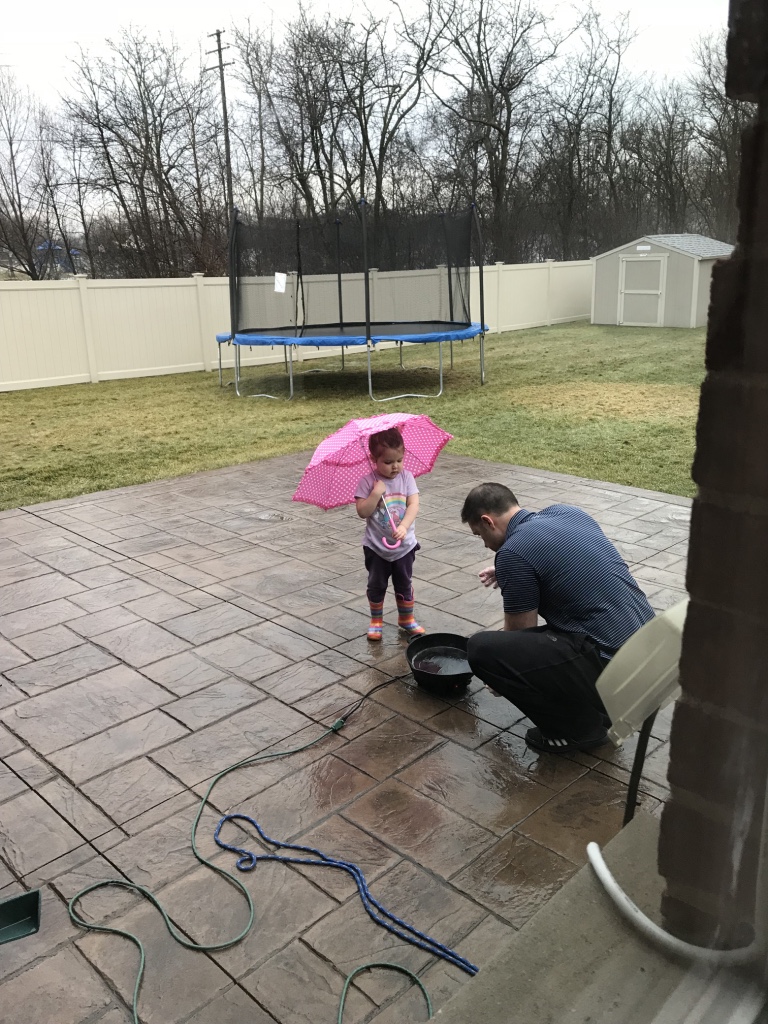 She eventually got bored with the food prep and made her way to the back fence where the big, muddy puddles were! Surprisingly, I really didn’t care about how messy she was getting! 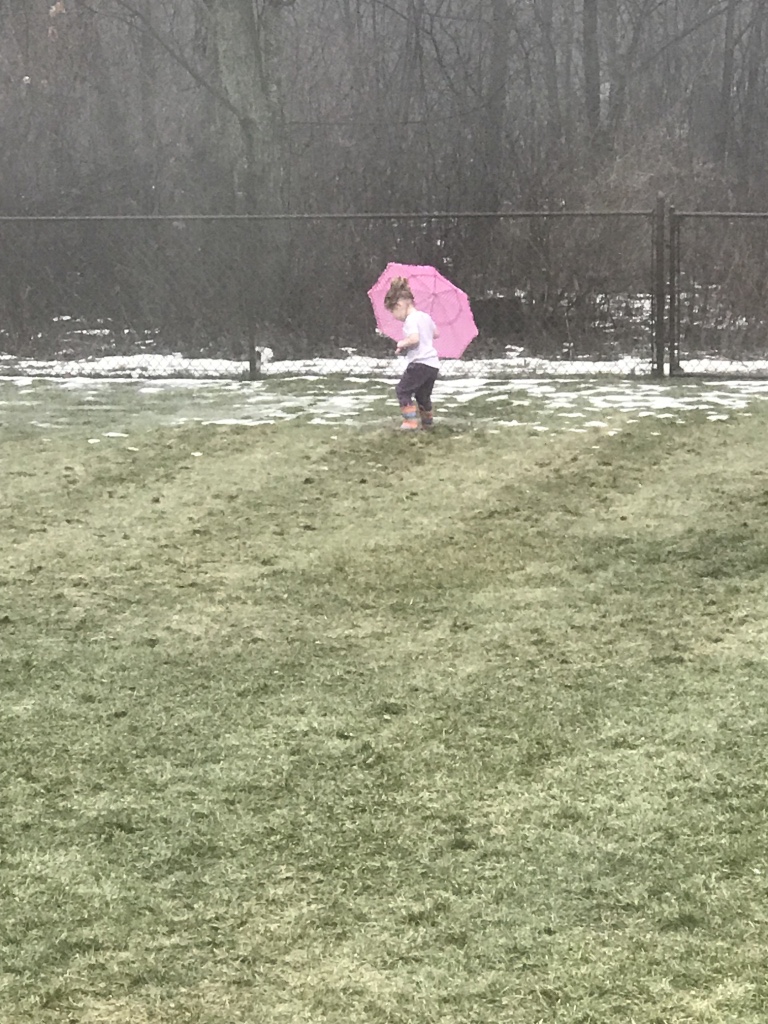 Matty’s birthday was yesterday, and my mom left gifts for him when she was over here babysitting on Tuesday. He opened them up in the evening with his cute little helper. Matty was excited for his new beer glass, Lulu was excited for the bubble wrap! 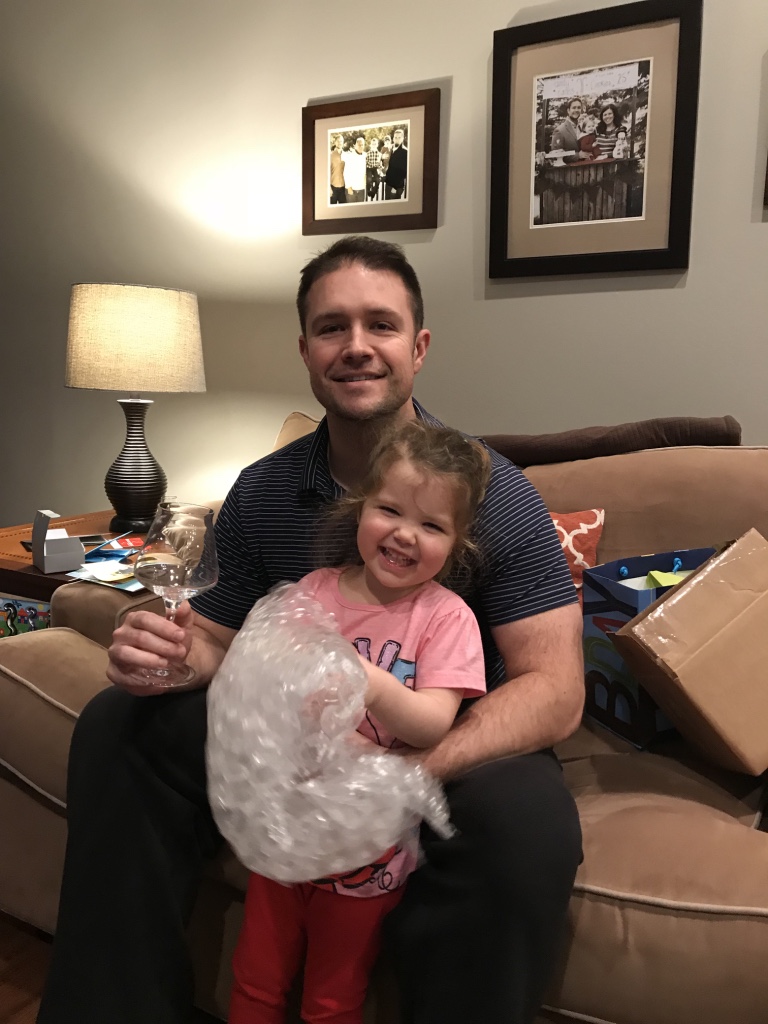 Emily was excited about the big yellow ribbon on the luggage that my parents bought Matty. 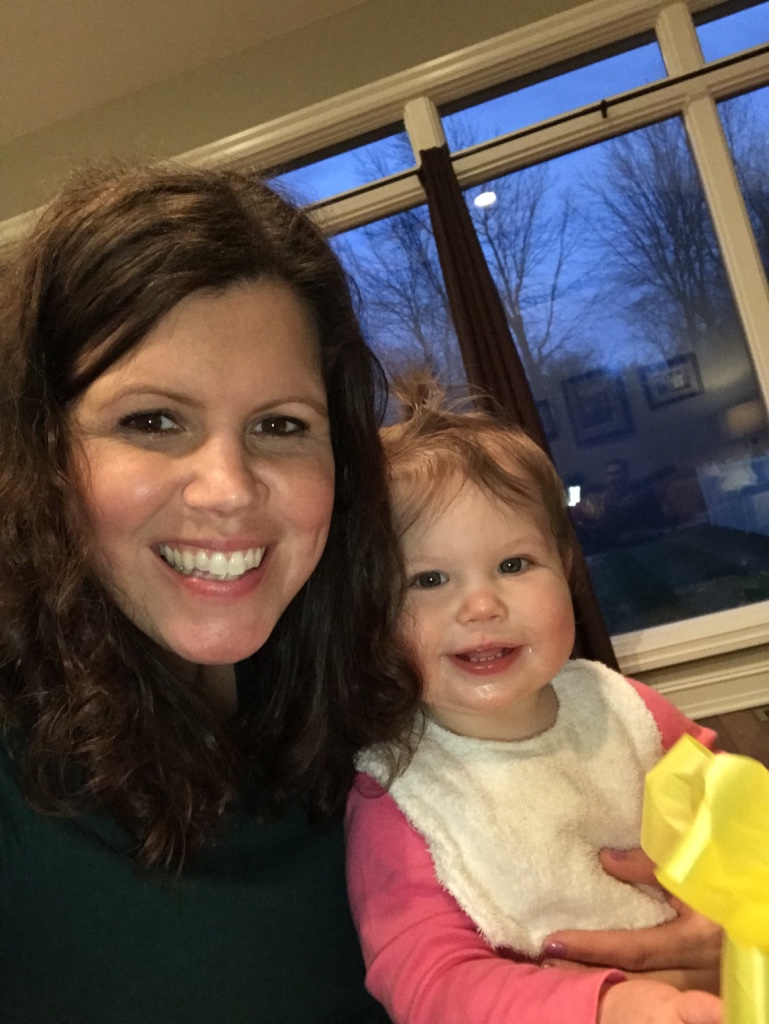 Lucy’s favorite activity lately is to wash her tea party dishes in the sink. I used to really dislike doing it with her, but, it turns out that if I just tell myself that it’s going to be a giant mess and that it’ll all get cleaned up when she’s done, I’m actually ok with it! 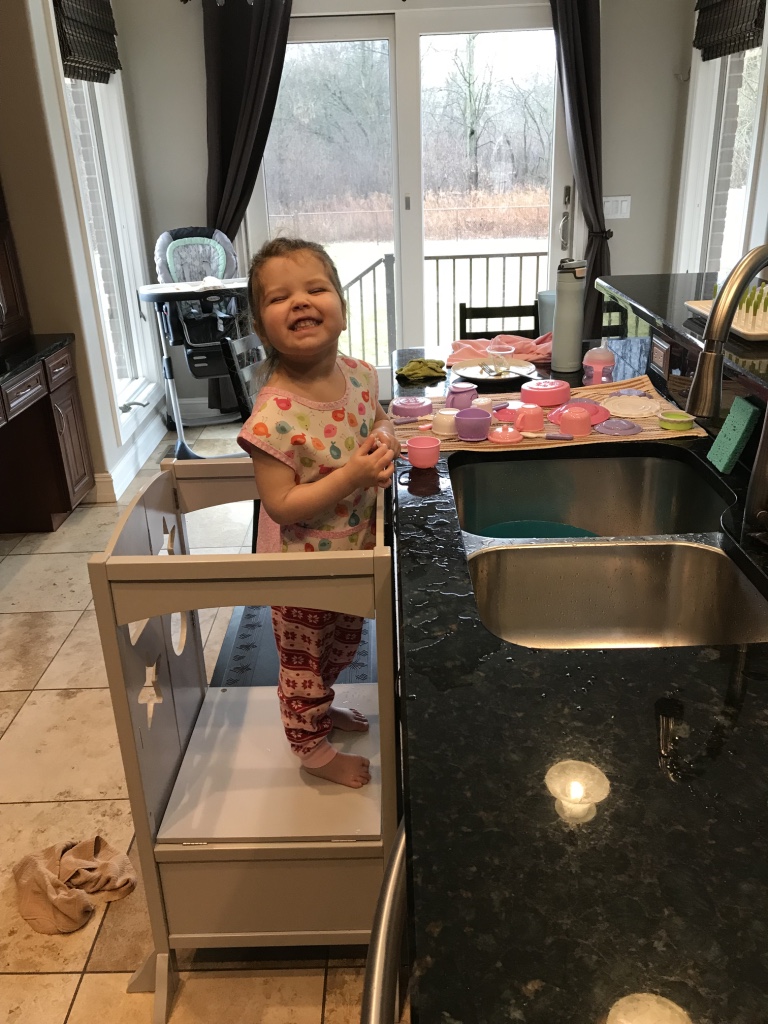 For the first time ever, Emily was a real stinker during lunch yesterday! I put pb&j and some blueberries on her tray. She usually shoves them into her mouth by the handful, but instead she decided to throw them off of her tray piece by piece. The dogs loved it, I did not! Then I gave her some graham crackers, and after she chewed them she spit them out and rubbed it all over her face! #naughtybaby 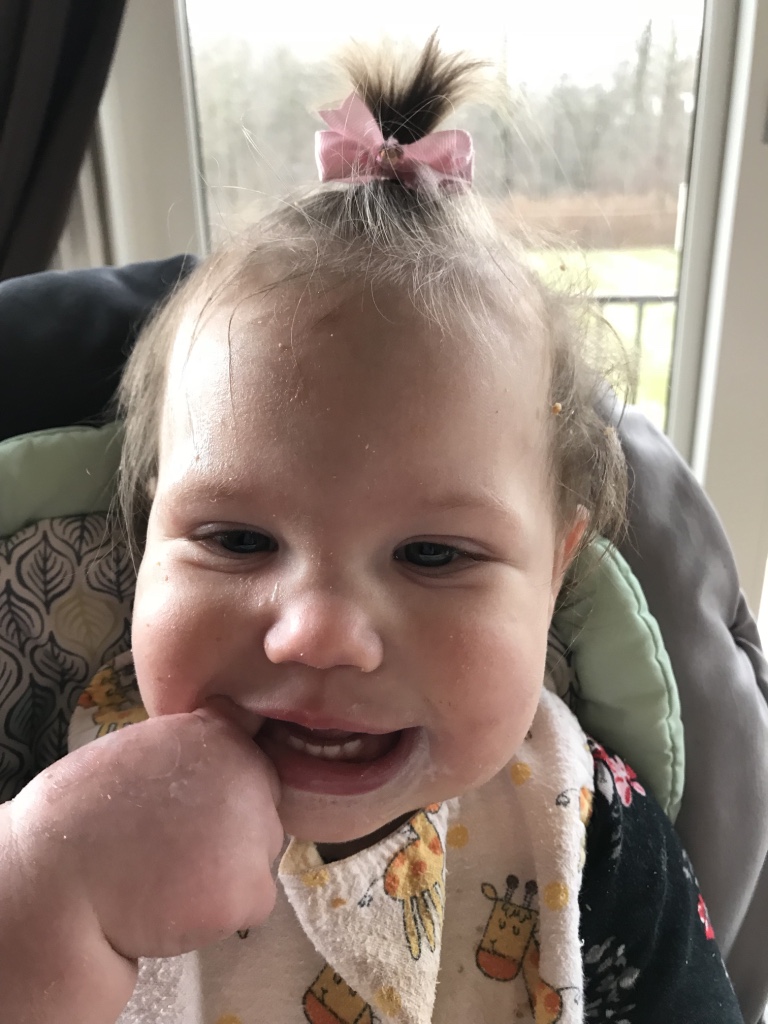 Grandma Rita came over yesterday afternoon and brought a sticker book for Lucy. It kept her busy for about fifteen minutes! 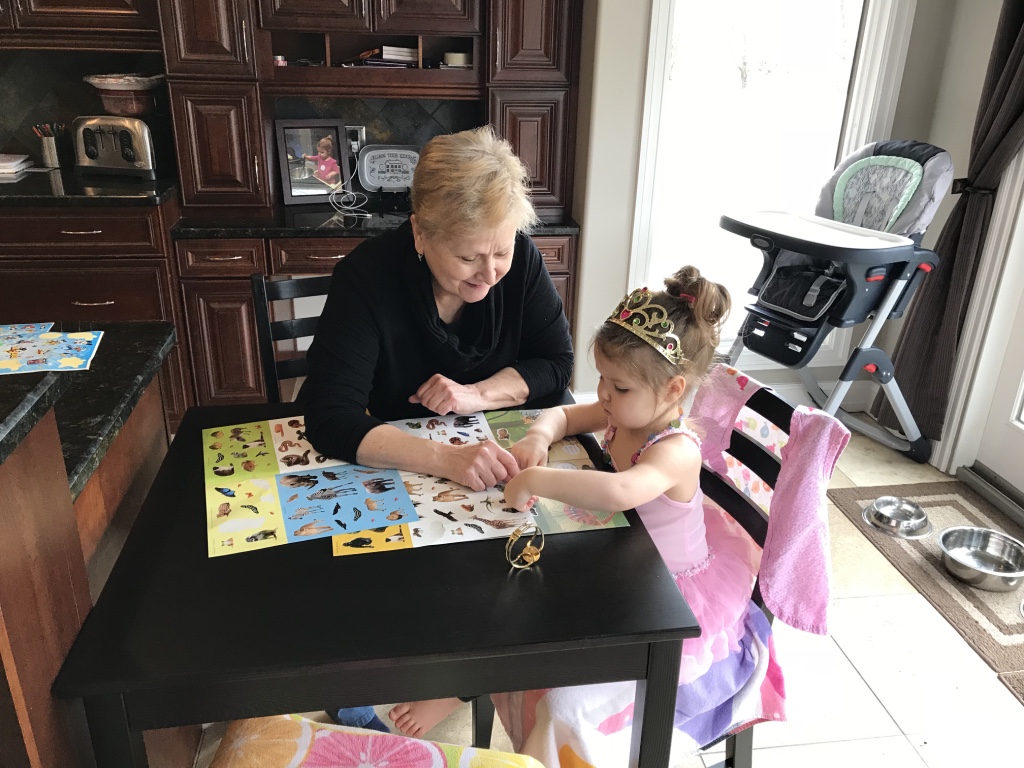 The girls got Matty a massage for his birthday, and Lucy had no problem opening up his card and pulling the gift card out for him! 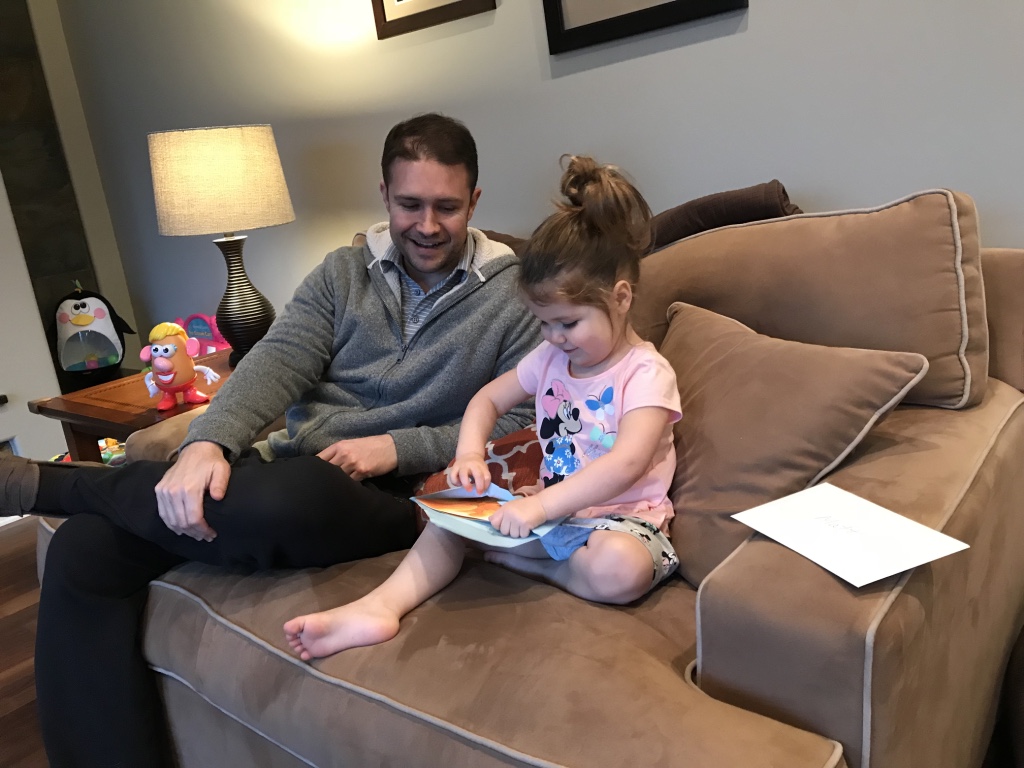 There’s a little look at life lately. I’m not sure what our weekend holds now that we’ll be at home instead of the cottage. I do know that since Matty decided to work on Friday since we aren’t going, I am taking advantage of having both grandmas being available. They are both going to watch the girls on Friday so that I can have some “me” time. I’m not sure what that entails yet, but I know I’ll figure it out!
XOXO