Happy Monday!
I’ve got some cute pictures for you from our weekend and a few from last week as well.
Lucy’s one and only princess crown broke last week. Since she plays princess every single day, I ordered her a new one right away. Actually, Amazon had a great deal on a Melissa and Doug four pack . . . because a princess needs some options when it comes to her crowns! Lucy happened to see the mail lady leave the package on the porch on Wednesday and ran into her room to get her knife from her fruit cutting kit to open it. It kept her busy for about five minutes before she asked for help. 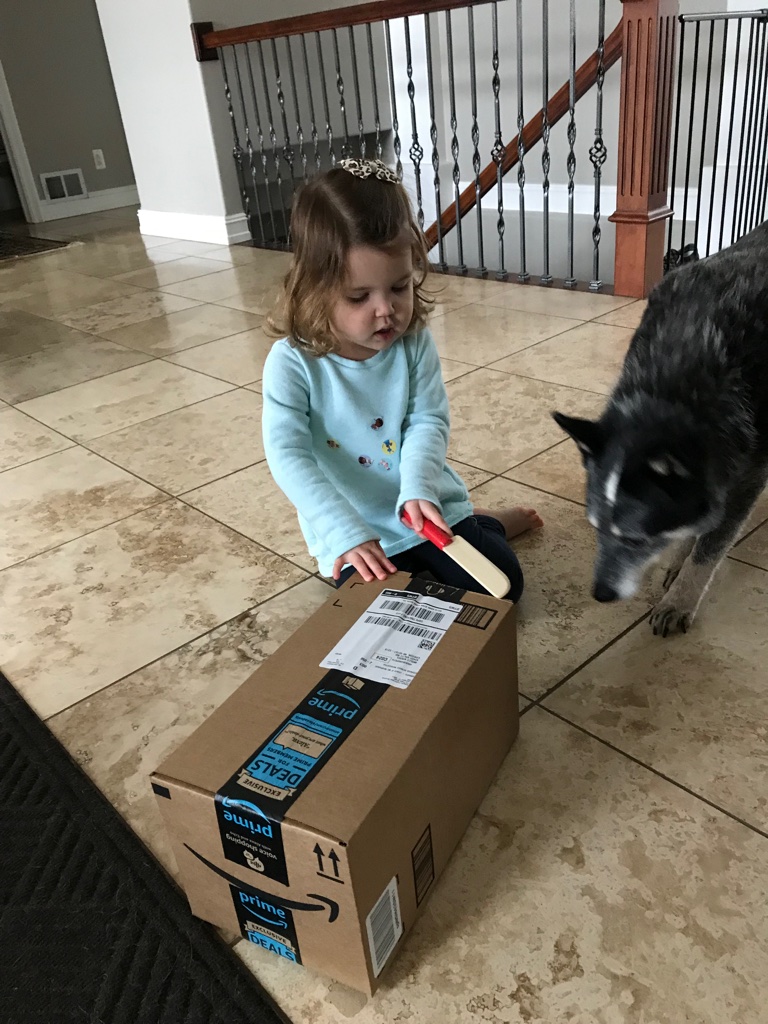 I bought this game from the Target dollar spot when Lucy was only a year old and knew it would come in handy some day. Wednesday was the day! Lucy and I spent some time matching up animals with what they eat while Emmy napped. 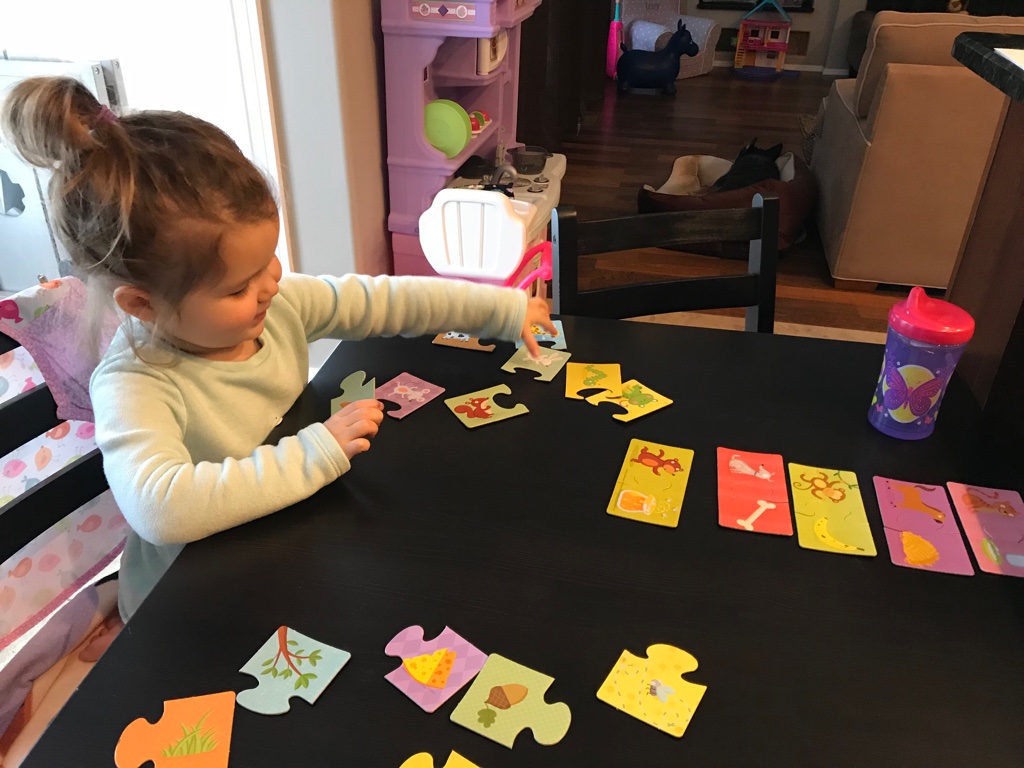 Thursday morning was a beautiful morning: 53 degrees and sunny! This isn’t the greatest picture, but I put the girls in their stroller . . . Lucy complete with one of her new crowns! I wish I could say it was to take them for a nice, long walk. But instead they sat in it and played while I picked up the enormous amount of dog poop that appeared in the yard once the snow melted! It was a gross job, but someone had to do it . . . and it felt so good to have it done! 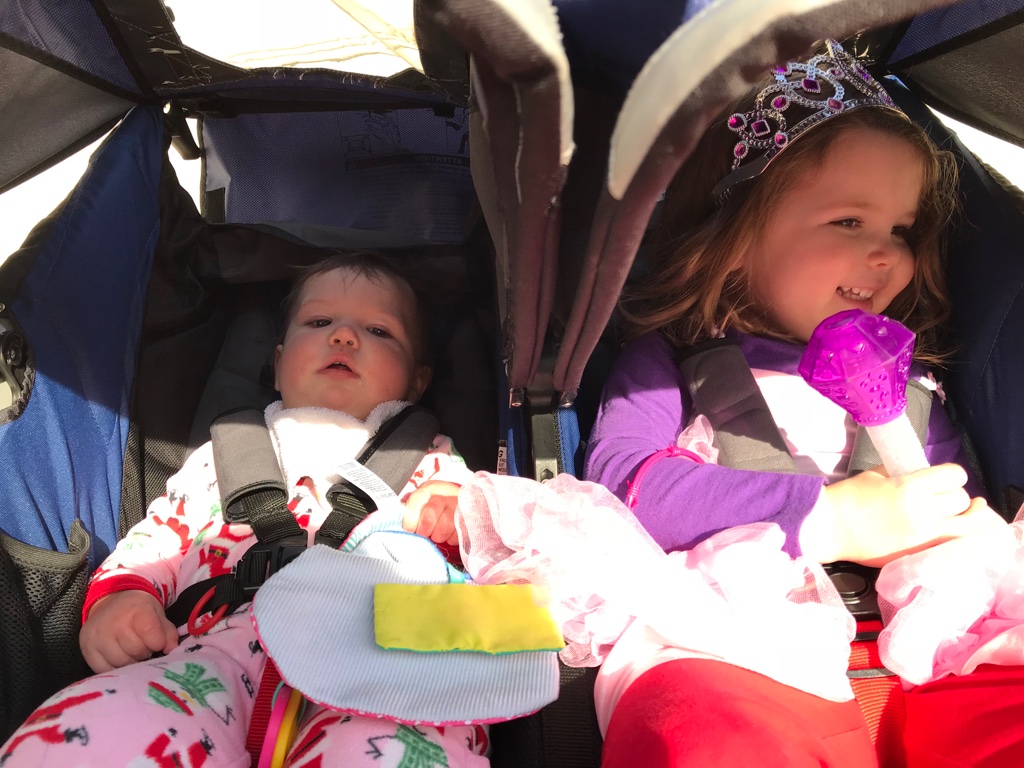 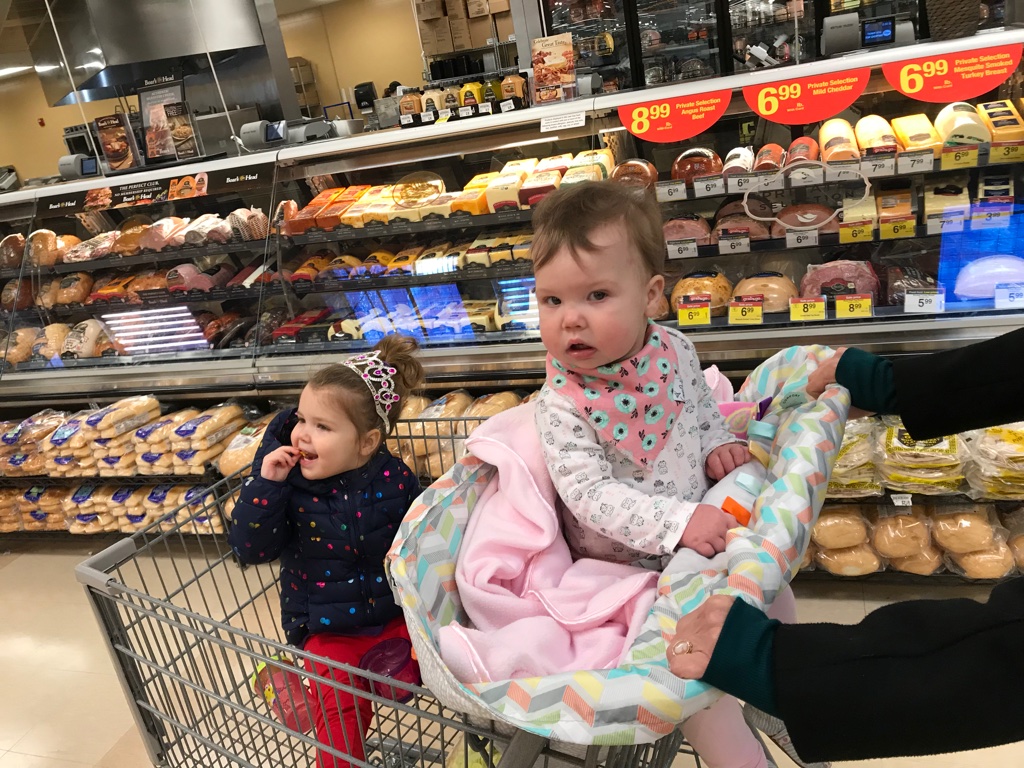 Because the girls have been sick with runny noses/fevers/coughs, the trip to Kroger was our only outing allllll week long. This mama is not used to that! We came up with some fun ideas of things to play inside, such as a birthday party with the stuffies . . . 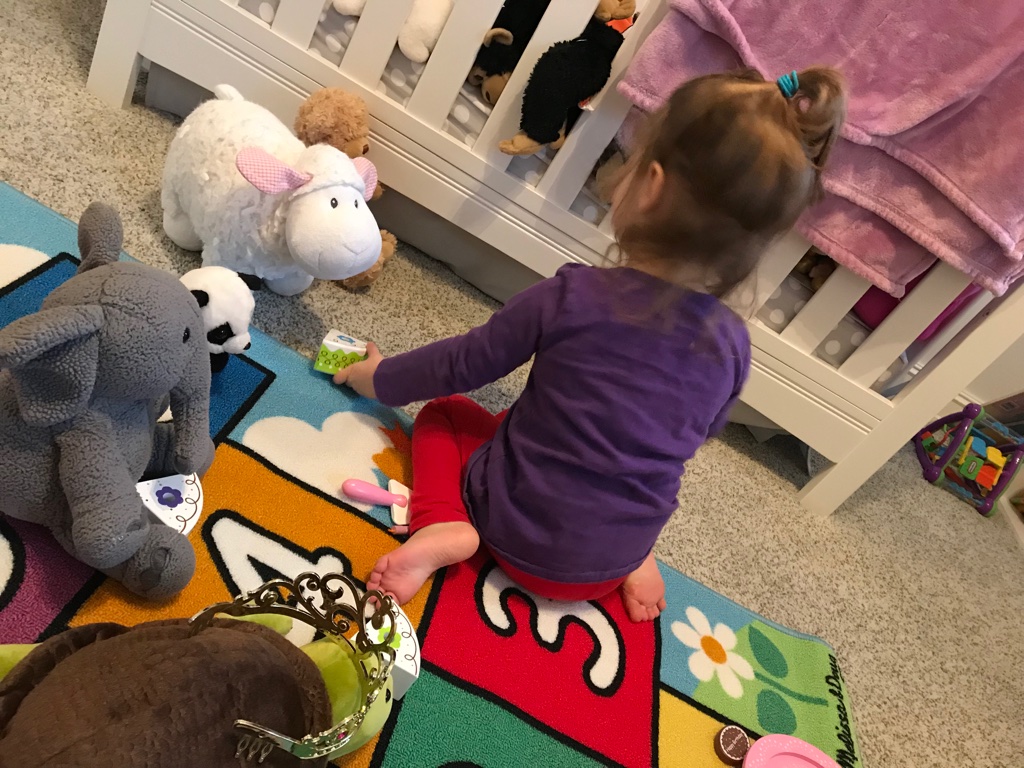 . . . and washing Lucy’s tea party dishes. This activity is not my favorite! 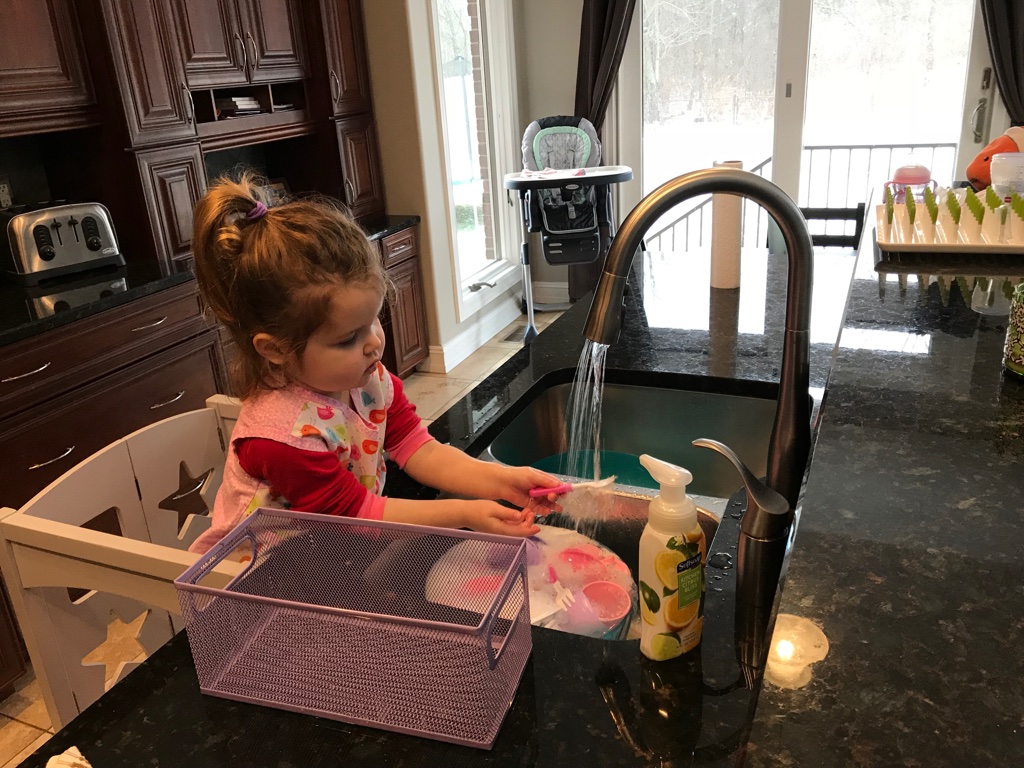 Matty woke up on Saturday morning with a really bad headache. He went back to bed for awhile, and once he was feeling better I let Princess Dr. Lucy go in and give him a check up. It was the sweetest thing ever! 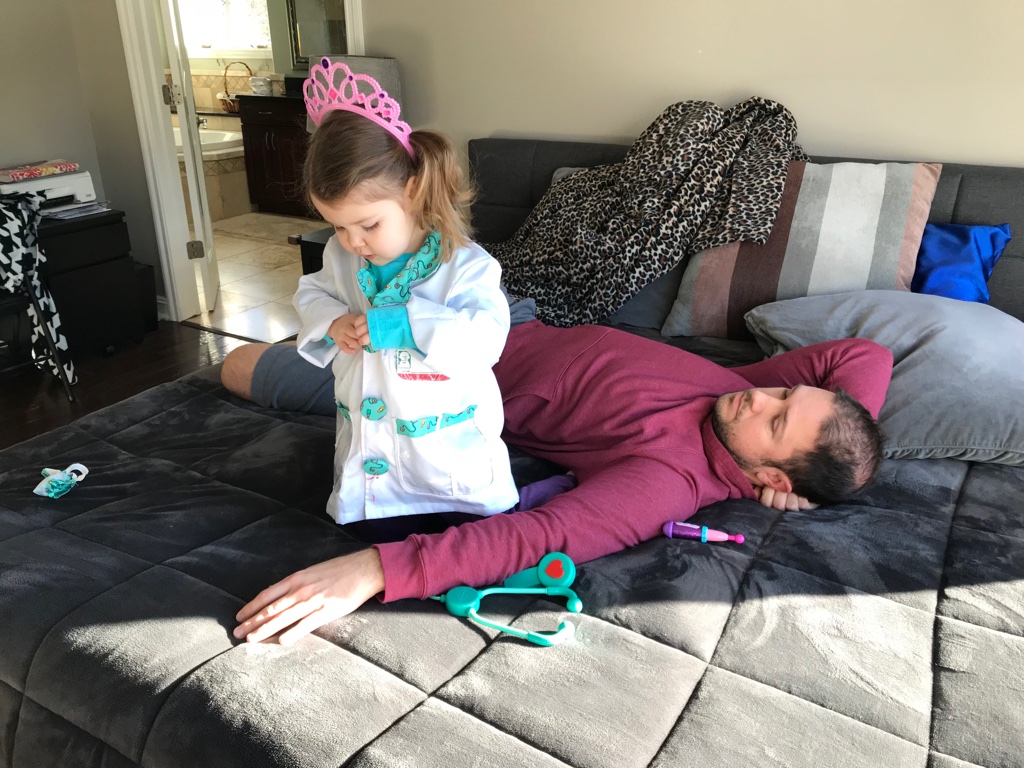 We had freezing rain Friday morning, and it turned the intersection in front of our house into an ice rink. Literally. We spent most of the day Friday, and lot of Saturday, playing in Emily’s room so we could watch the circus of cars sliding right through the stop sign, spinning out, narrowly missing one another, etc. 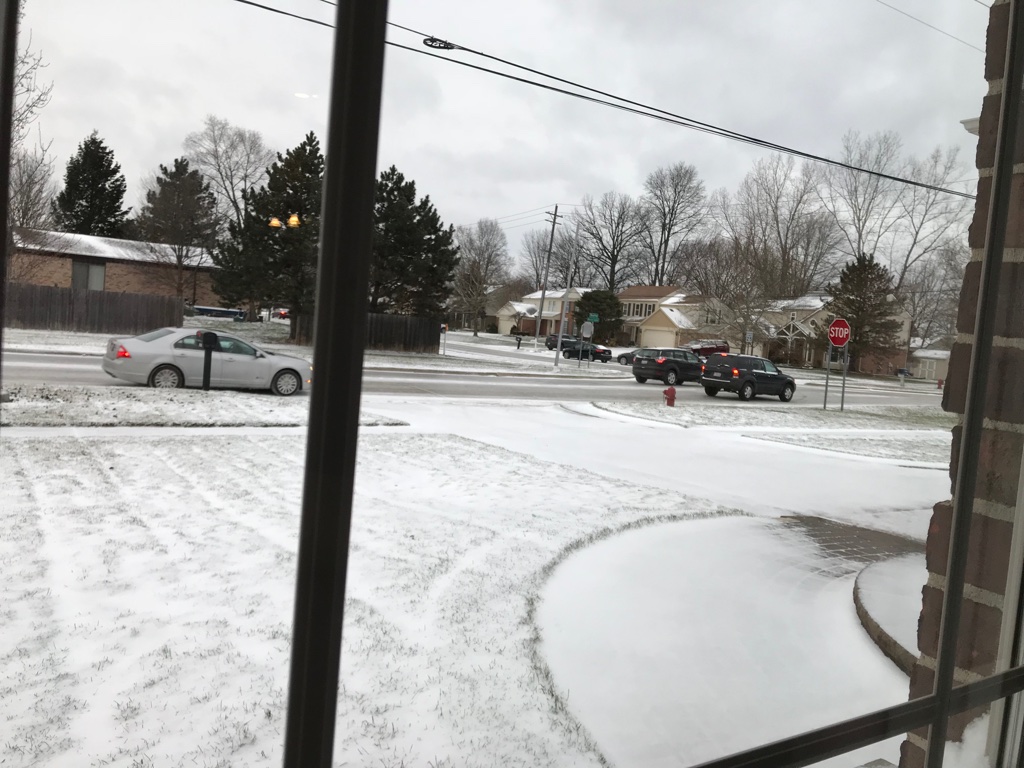 We left for an hour on Saturday to go to the grocery, and when we got home we saw that someone had run into the stop sign and knocked it over! #andwemissedit
Anyways, Matty went out to try and fix it, but it wouldn’t stay up. I called the Canton Police to let them know, and they told me that not only was it not their problem (it’s the county’s), but that if it was so icy then the stop sign wasn’t really effective anyway so there’s no rush to put it up. #seriously #theysaidthat
So anyways, as frustrating as it was, the lack of stop sign definitely increased the entertainment value. Thankfully, the only casualty was our neighbor’s mailbox, and it’s a small miracle that ours is still standing!
Update: a county truck came out Sunday afternoon and spent some time scraping the road and putting down salt. But still no stop sign. 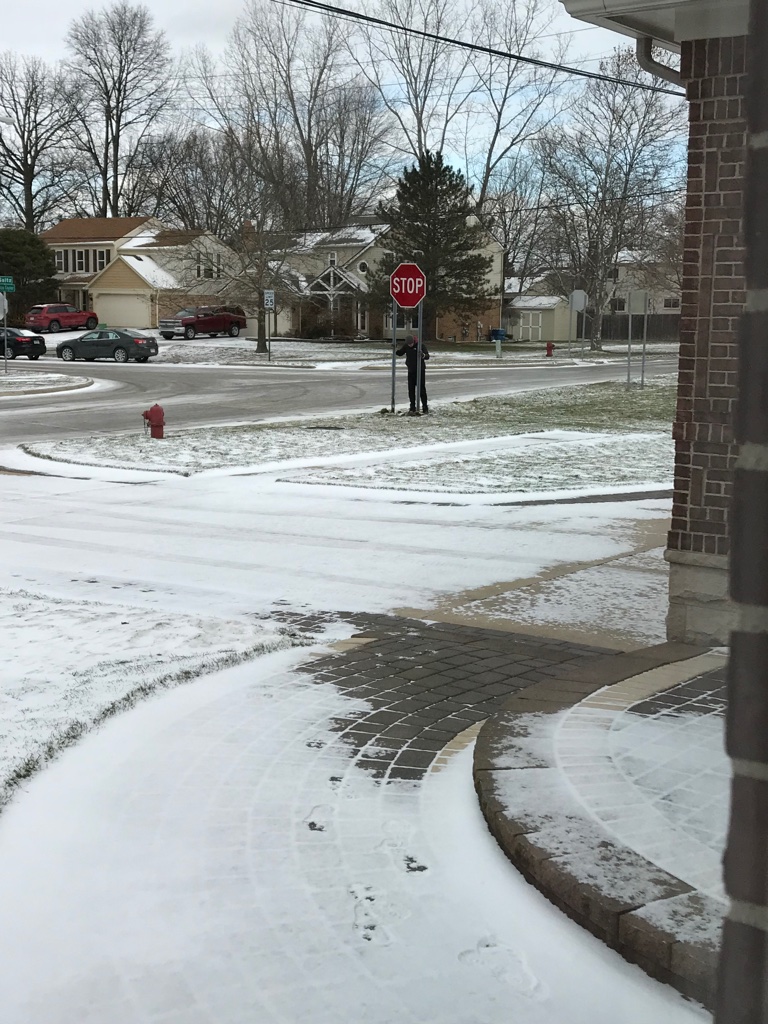 Miss Roses is officially allowed to have a lovie in her crib now, and she was so happy to get this cute little puppy! 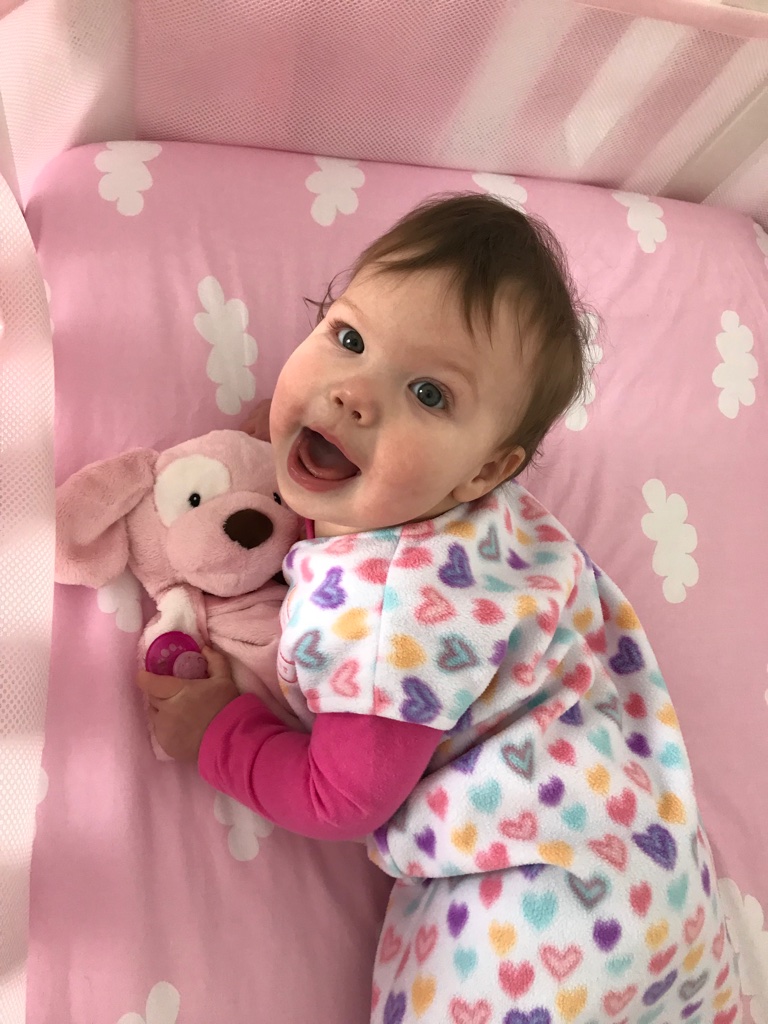 I should have predicted that Lucy would like the puppy too. Needless to say, a second pink pup is arriving on Monday. There was a major meltdown when Lucy wanted to have Em’s new pup and we said no. There was a lot of back and forth discussion about whether or not Lucy should get one too, especially after her major meltdown over it. We didn’t want to reward her crappy behavior but, in the end, decided that she’s only two and doesn’t quite understand the whole concept of you don’t always get a gift when your sister does. #parentingishard 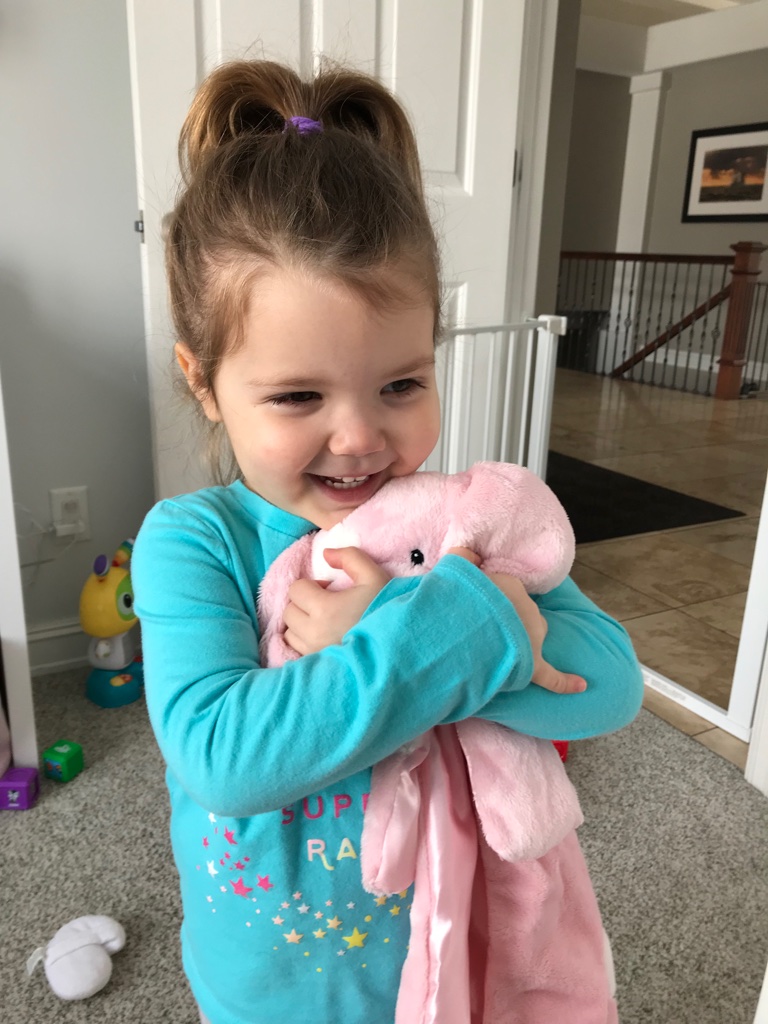 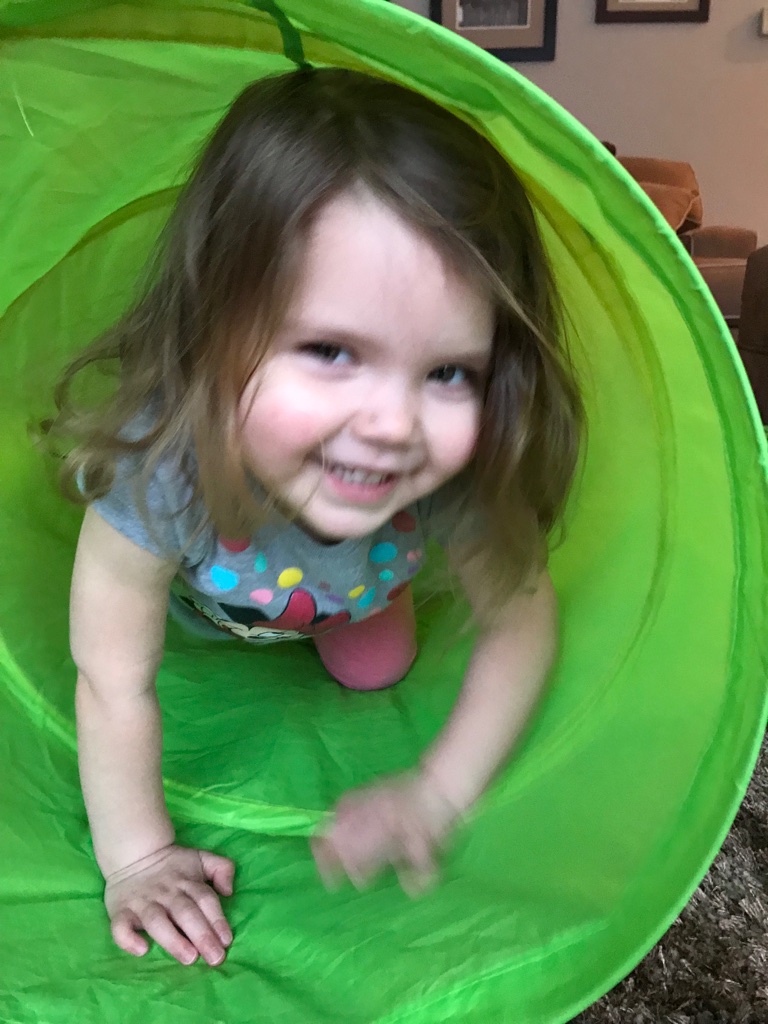 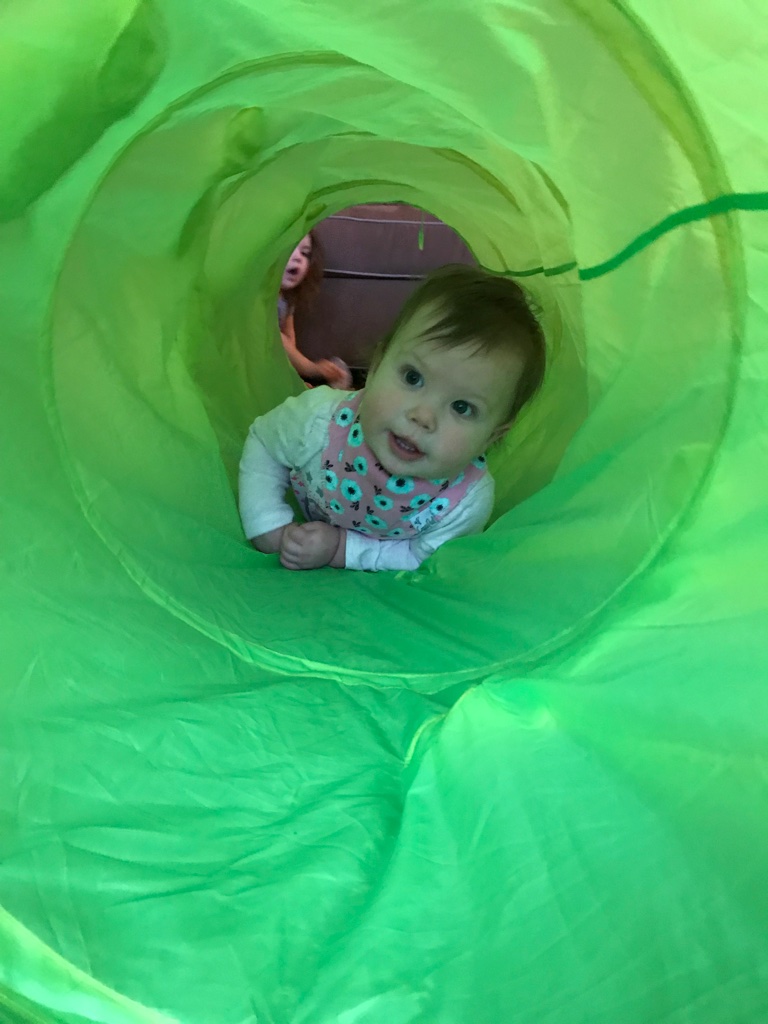 And just for fun, here’s Lucy on her birthday when she first got the tunnel! 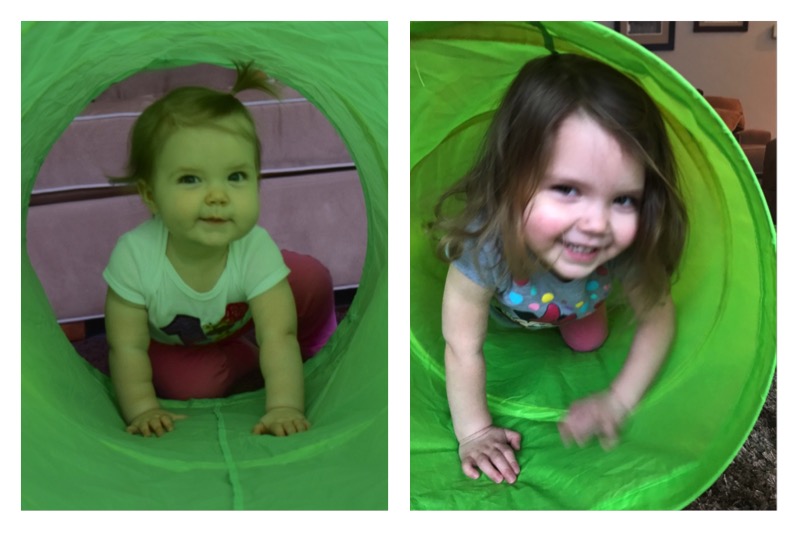 Lucy used one of her new crowns to make Sydney look fabulous. 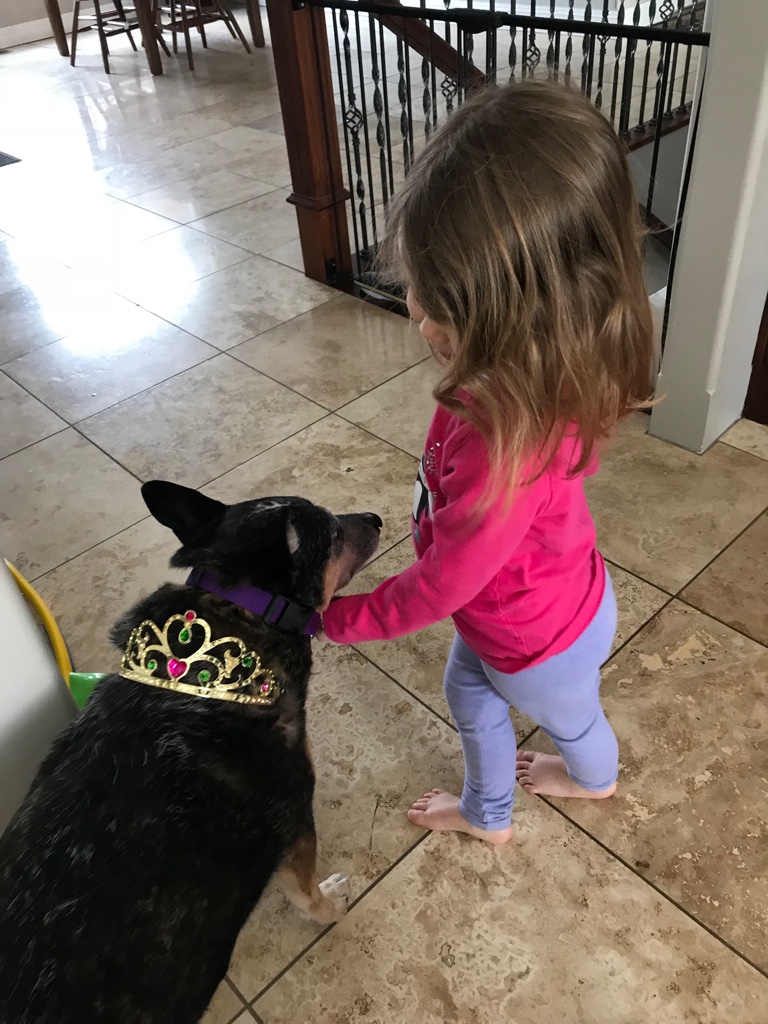 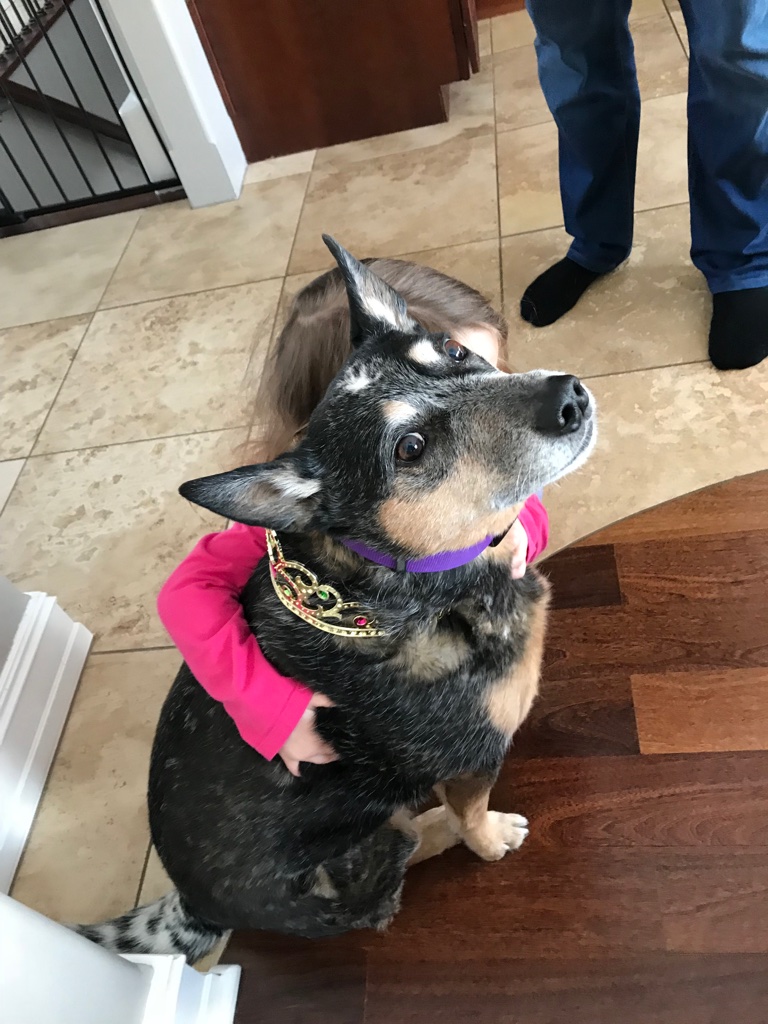 How sweet is Emmy Roses?? Since the girls have joint custody of pink pup until the new one arrives, I gave Em this elephant for her nap. Really, though, I just want to crawl in and cuddle up with her! 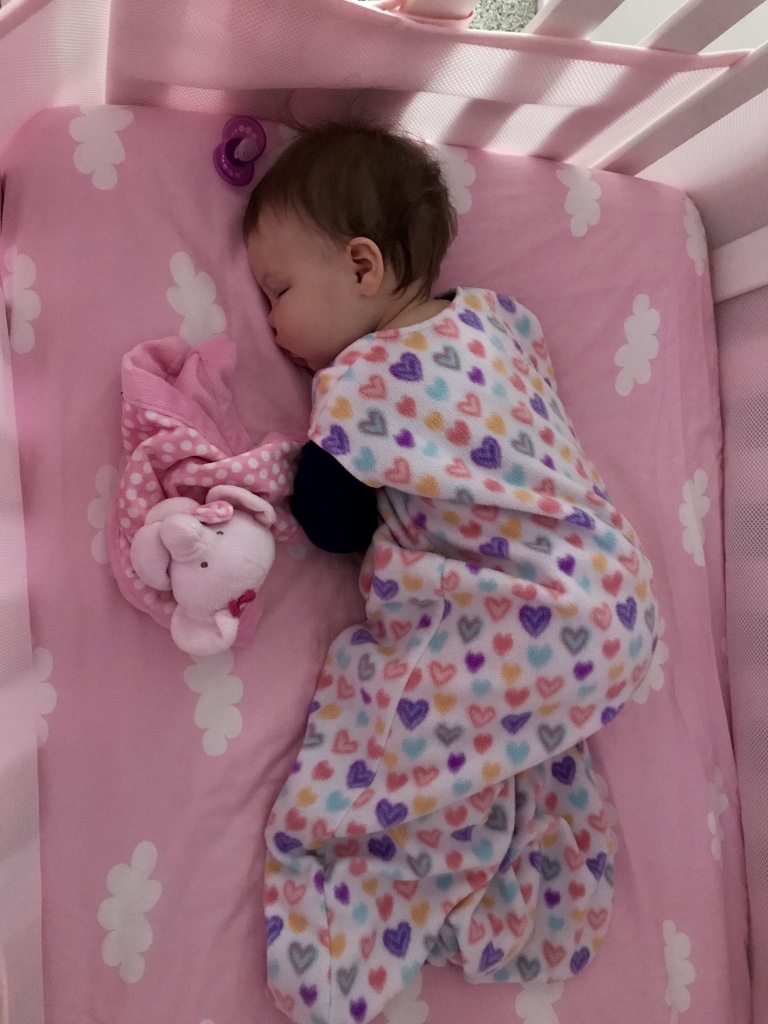 Our double jogging stroller is too big, bulky, and heavy for me to keep in the car for our everyday trips in and out of stores. I’m tired of Lucy wanting me to carry her all of the time instead of walking next to Emily’s stroller. So, it looks like we’re going to sell our regular single stroller and get the girls this new ride. A regular seat for Emily, and then a platform with a buckle for Lucy if she doesn’t want to walk. #hereshopingitworks 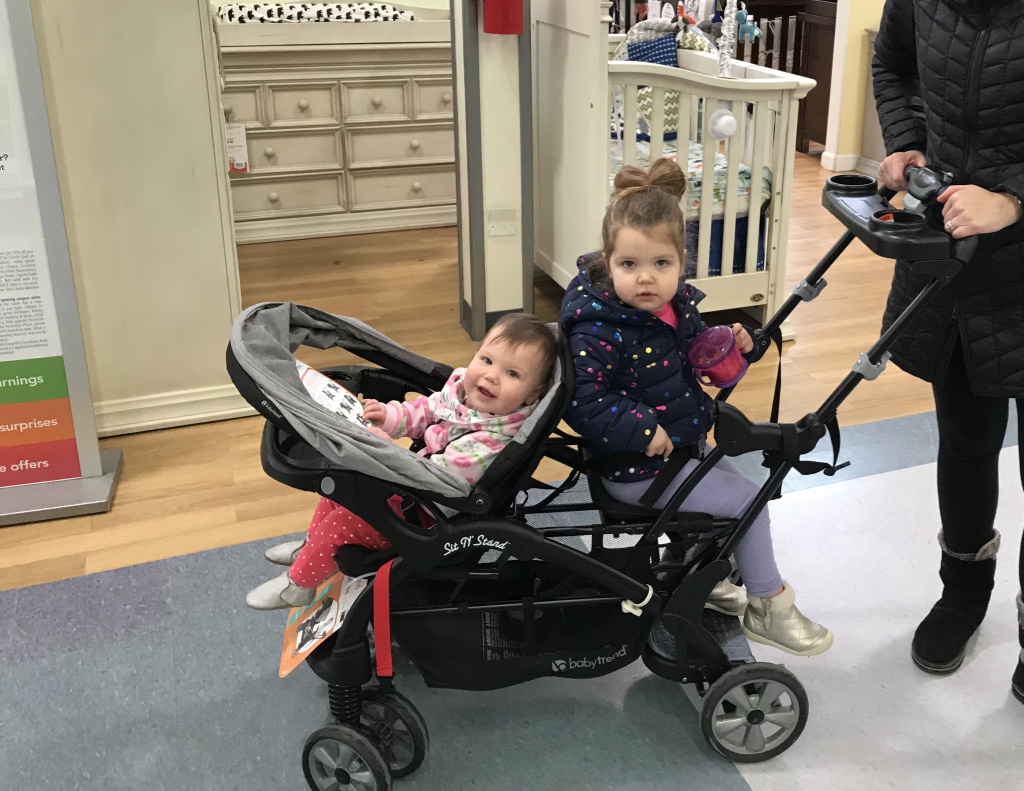 We stopped at Trader Joe’s on Sunday, and it was SO crowded, but Lucy did a great job pushing around her own shopping cart. She eventually filled it with Trader Joe O’s, cheddar rocket crackers, and a little bag of heart shaped sugar cookies. #healthnut 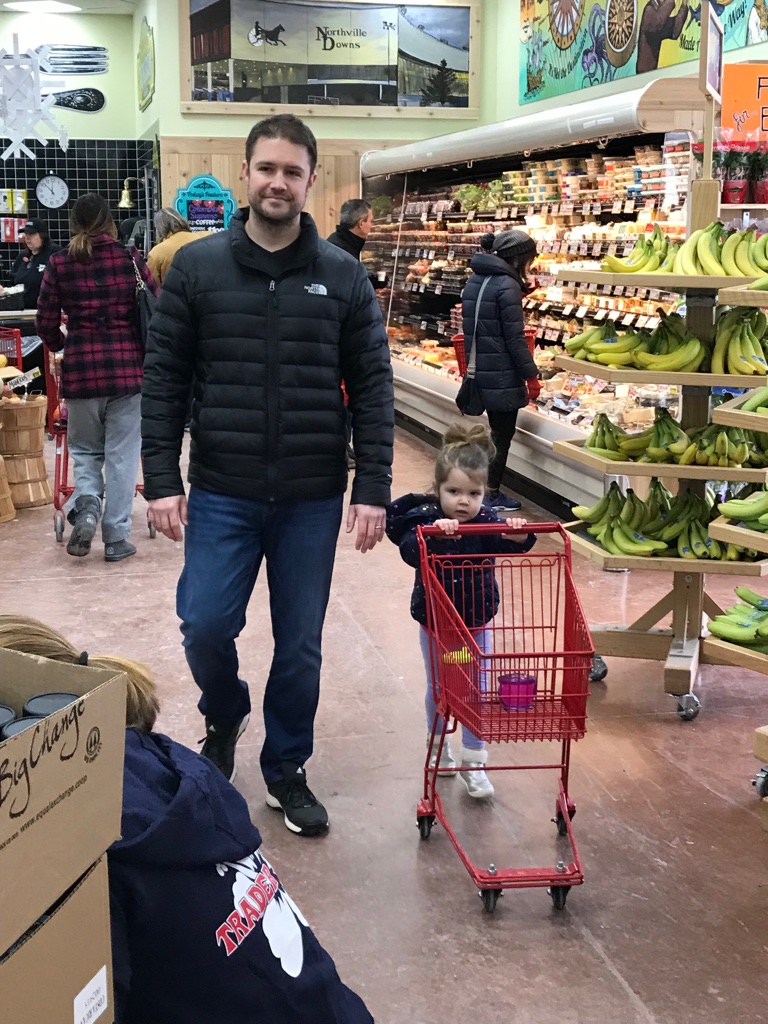 And seeing Lucy push that cart reminded me of this picture of her from her first birthday play date at Tiny Town. She is turning into such a big girl! 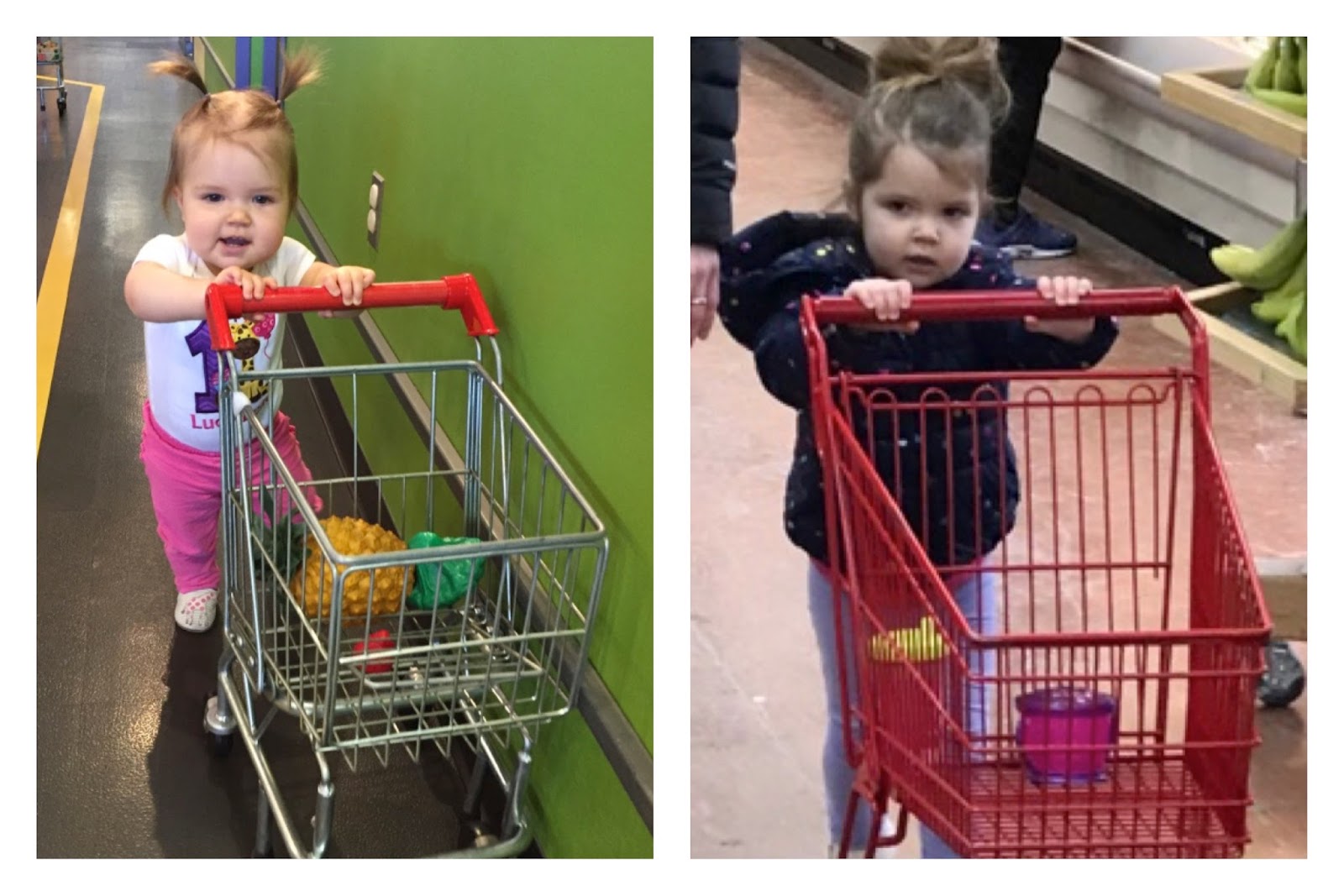 This weekend flew by, and I’m looking forward to having some healthier girls this week! Other than Lucy’s school on Tuesday, we have zero plans. I’m going to have to fix that because I can’t handle another week of staying home everyday. This mama needs some adult interaction!
Have a great week!
XOXO