A day late because Matty and I had a DATE NIGHT last night, and the girls each spent the night at a grandmas’ house! We were living large at the Red Wings game, and it was a real treat. It should be noted that neither of us are hockey fans, but Matty got free tickets from a vendor at work that included parking, food, and drinks. #cantpassitup
Before we talk about Date Night, though, there are cuter matters at hand! It was way too cold to play outside last week, so I brought some snow inside for Lucy to play with. 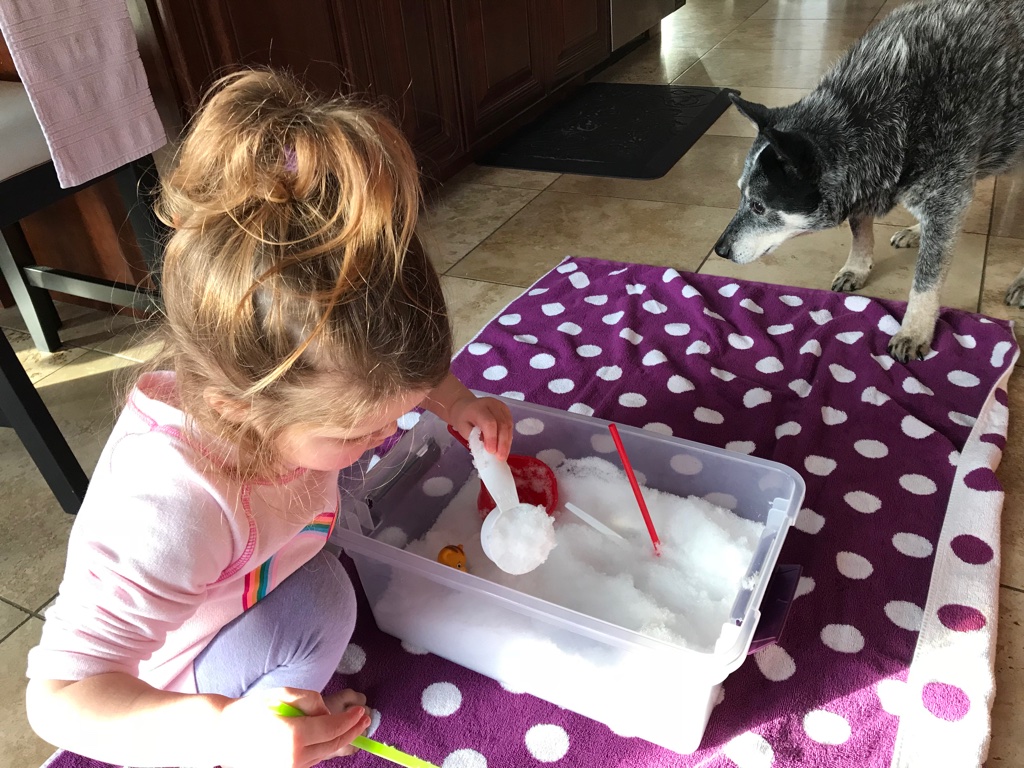 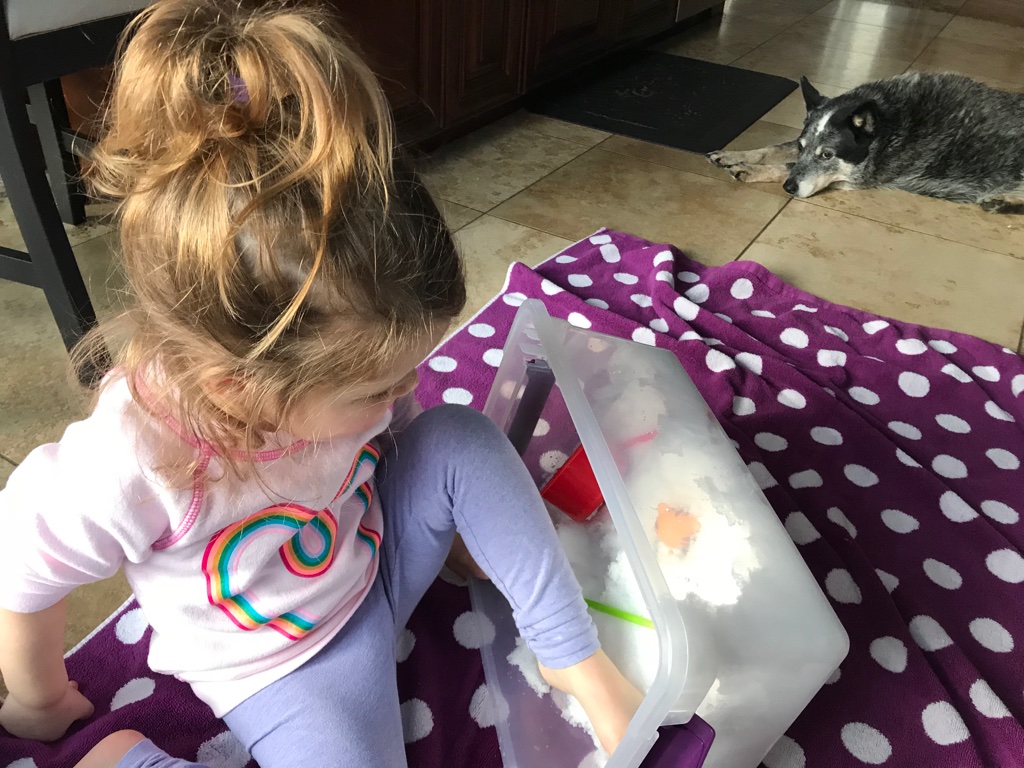 Emily was playing nicely in her room, so I went in to the kitchen to grab something. In the thirty seconds I was gone, she had overturned the baby cradle and helped herself to one of Lucy’s baby pacifiers. She knew exactly what to do with it, but kept pulling it out and looking at it because it was different than her normal paci . . . and it was the cutest thing ever! 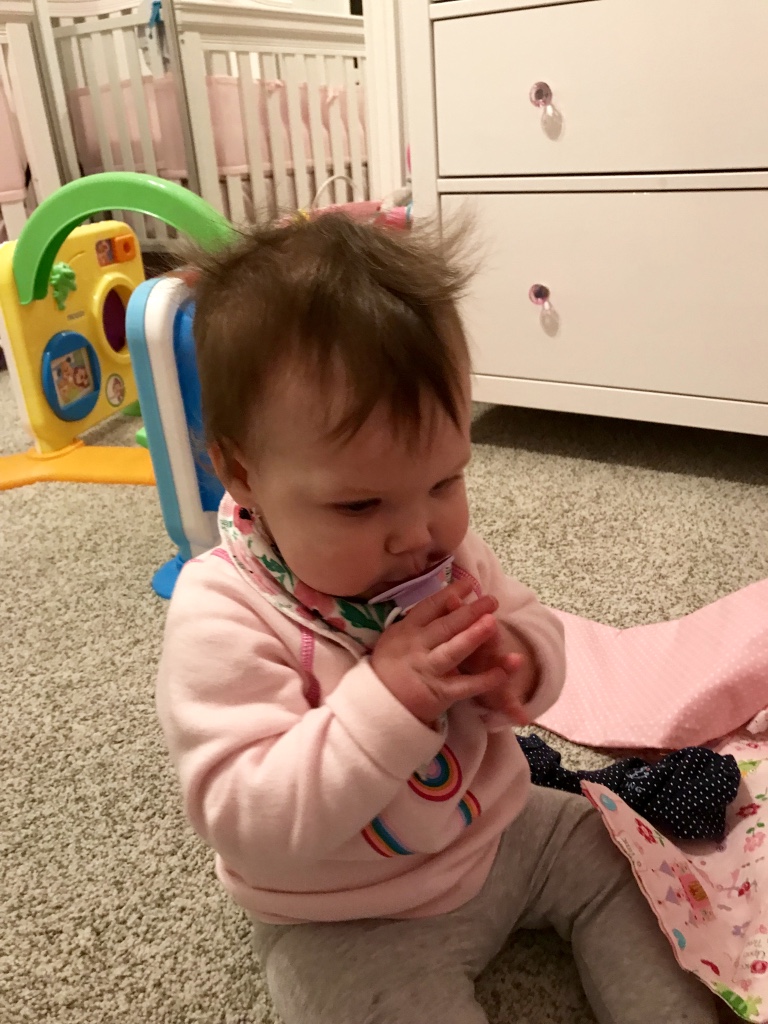 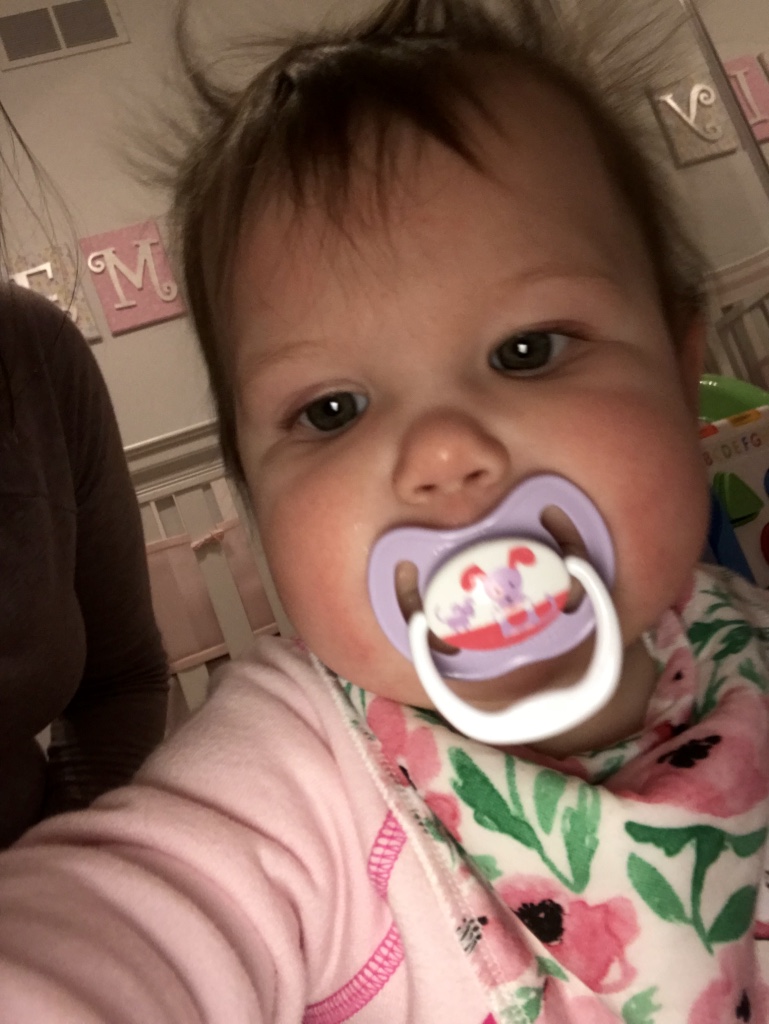 Someone didn’t get the message that it’s Friday and she should be happy! It turns out she was in the beginning stages of a bad cold, though, and wasn’t quite feeling her normal happy self. 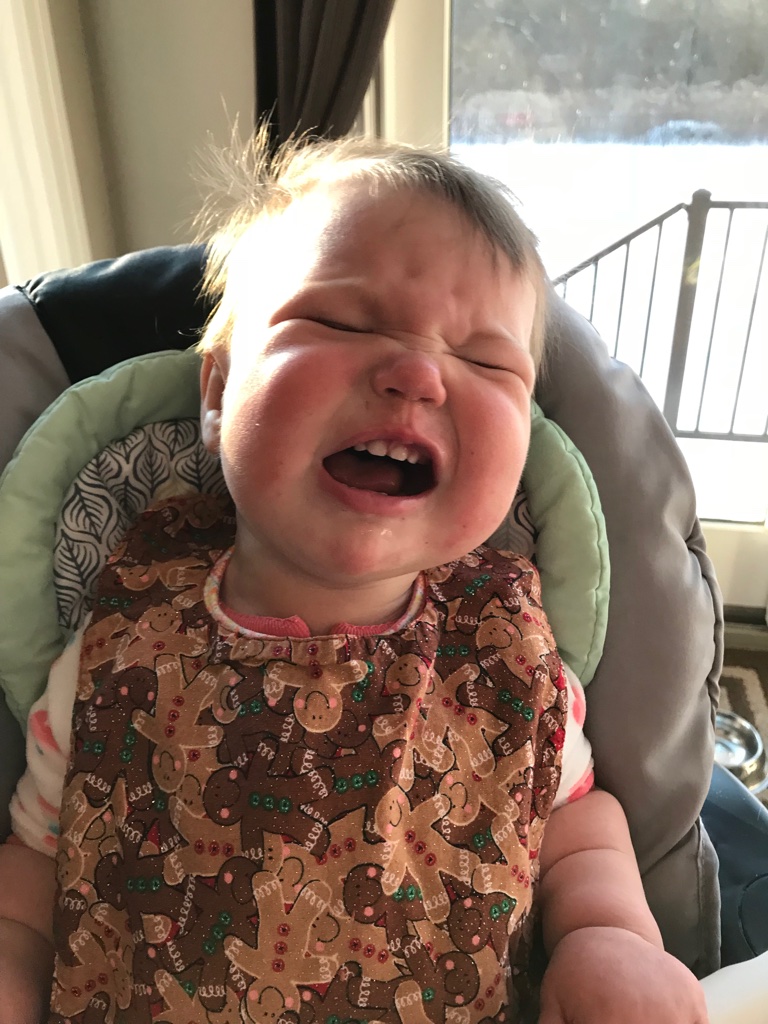 We had a play date to get to on Friday, but I was having a hard time getting Dr. Lucy to take off her dress up clothes and get in the car. Fruit snacks, Kindle, yogurt raisins . . . none of my usual bribes were working! #momproblems 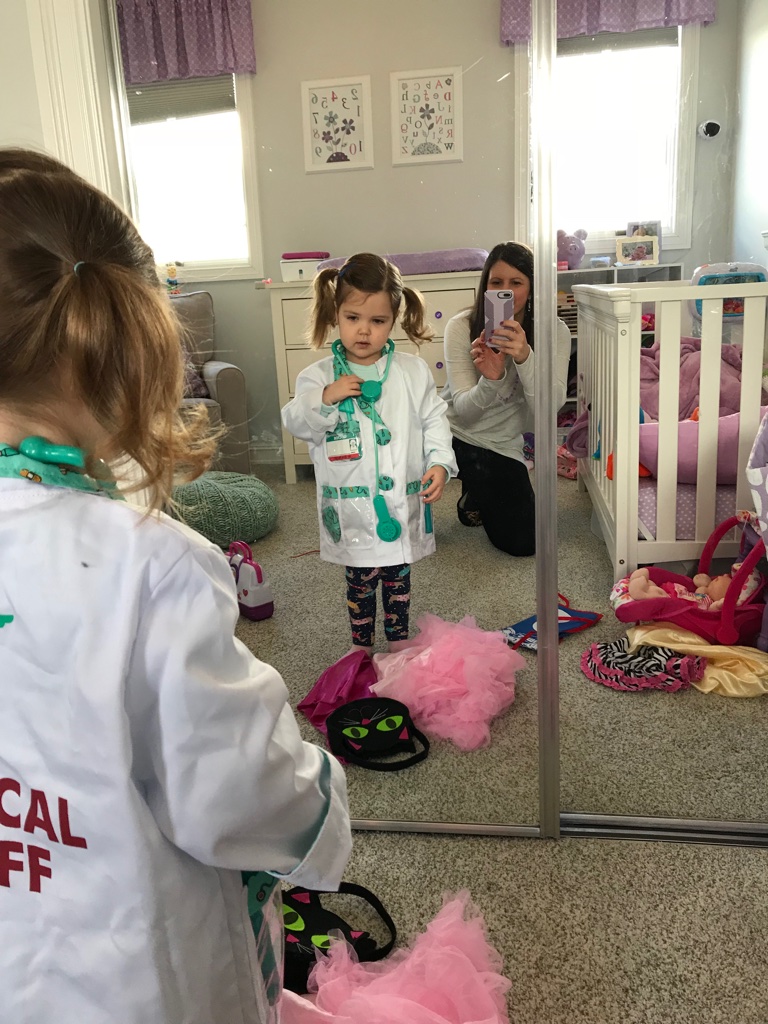 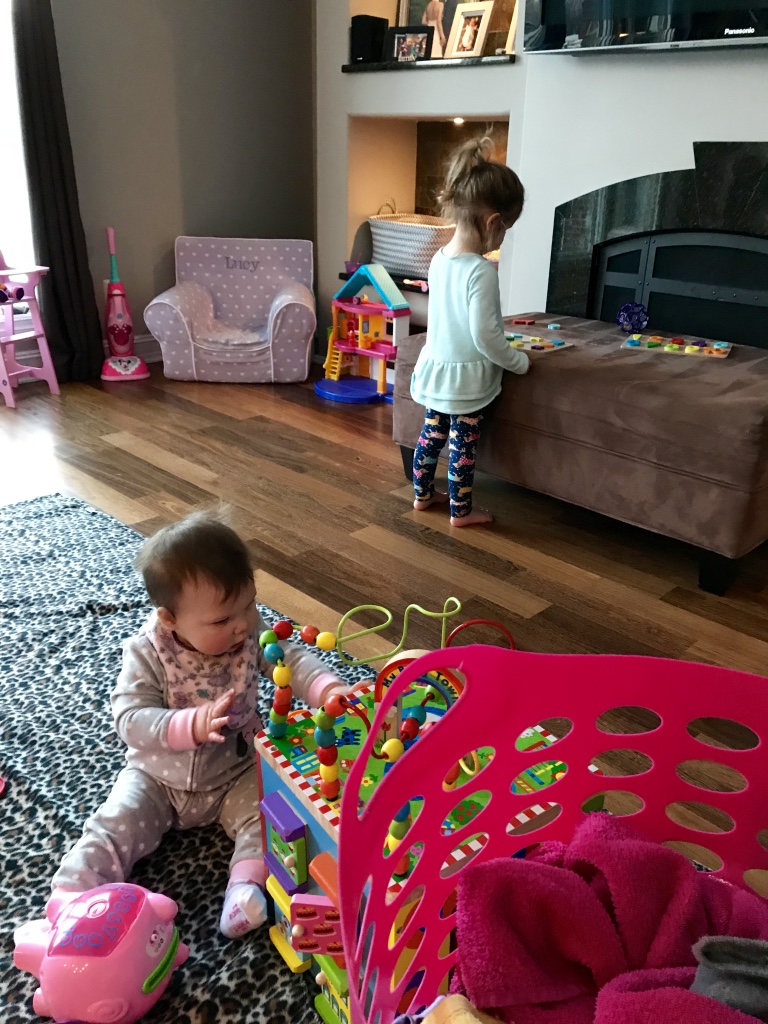 Emmy had a tough night on Friday. She was so stuffed up that she couldn’t sleep well lying down flat, so we cuddled up for a lot of the night. 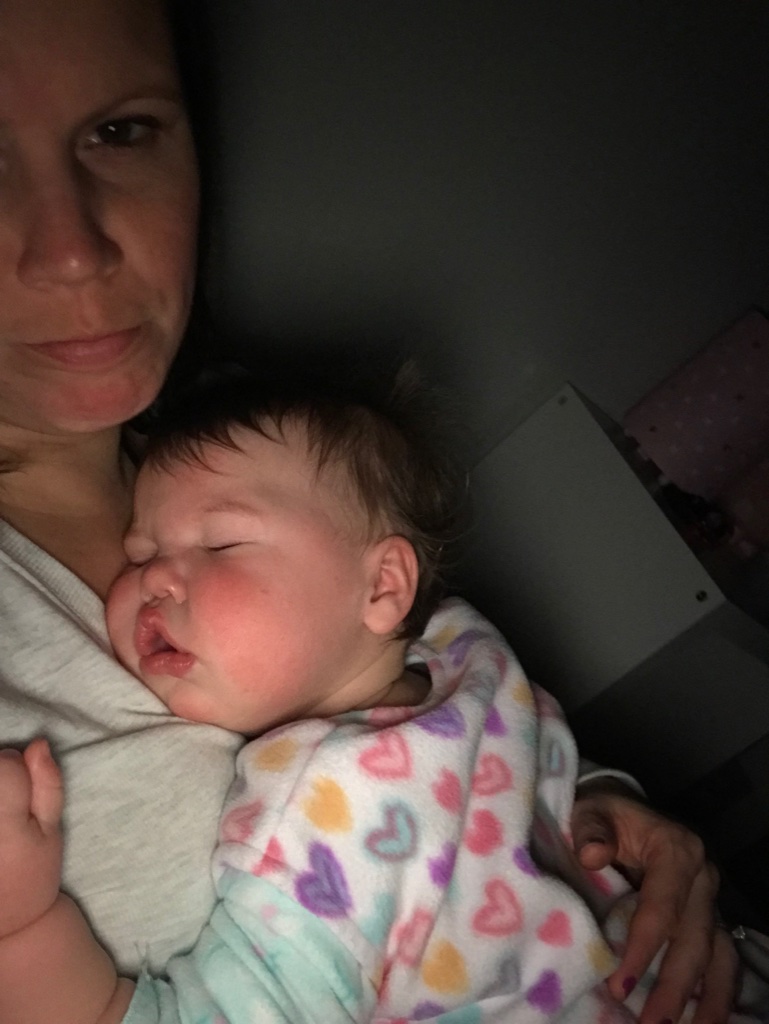 I apparently have zero pictures from Saturday. We went to Costco, picked up Panera for lunch, and played at home all afternoon.
Matty kept the girls busy Sunday morning while I packed them up for their grandma sleepovers. Please note, as soon as Matty saw this picture he said, “Where are my shorts?!” haha Rest assured, he was wearing shorts, but two wiggly girls on his lap must have made them ride up. 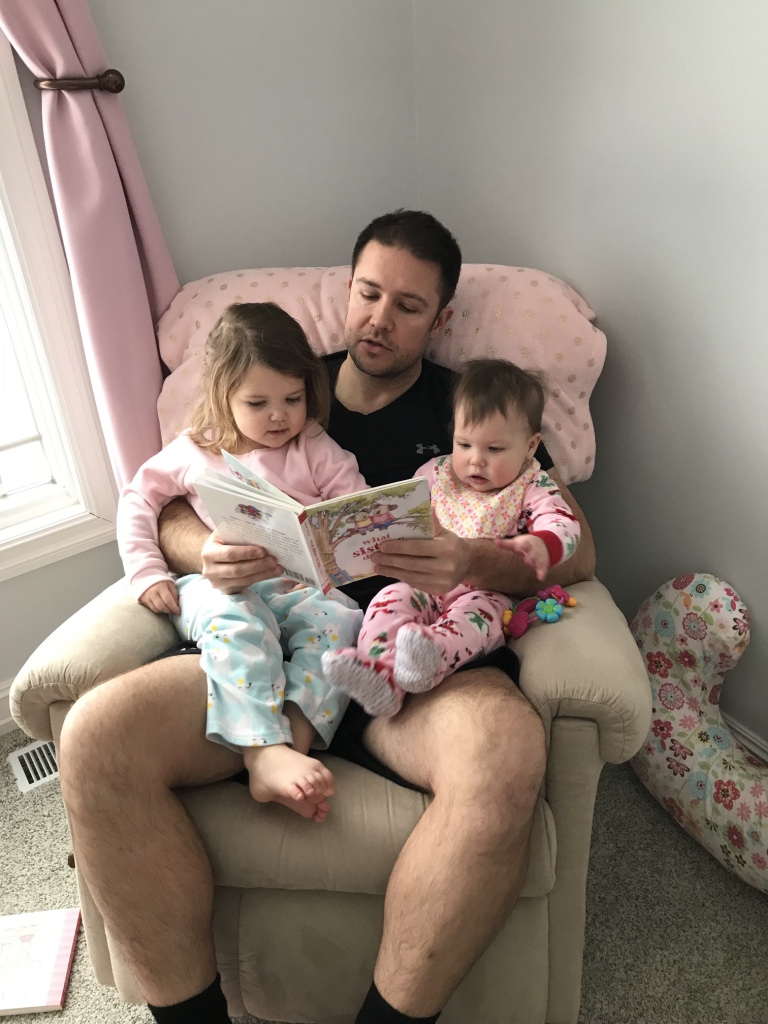 Oh. My. Goodness. Rita picked Lucy up around 11ish, and then Matty drove Emmy to my parents’ house while I went to the grocery. We reconvened for lunch and a few chores and then spent much of the afternoon relaxing on our bed! Matty had some bourbon and watched football. I had some wine and worked on some blogs. It was pure bliss! 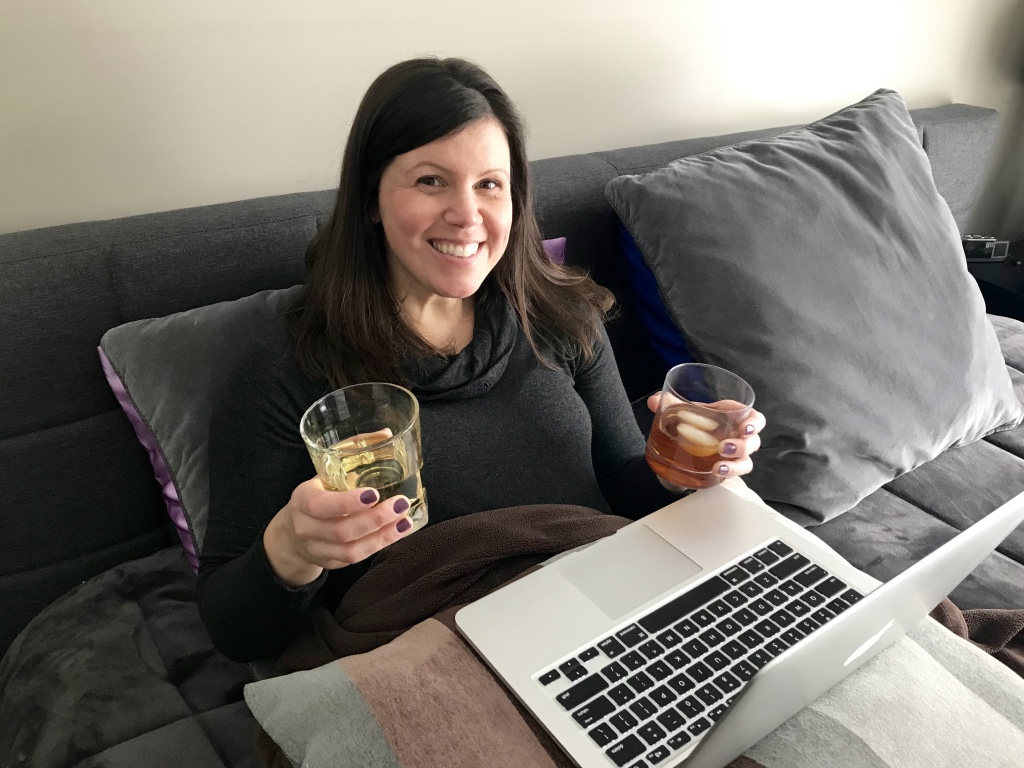 We got ourselves out of bed and ready to head to the hockey game, and we were so surprised/impressed with how nice everything was at Little Caesars Arena. Matty was given two tickets from a vendor, and we weren’t quite sure what to expect, but it definitely wasn’t this! Our tickets included club access which meant our parking, food, and DRINKS were all free! The club area was quite nice, and the food was delicious! 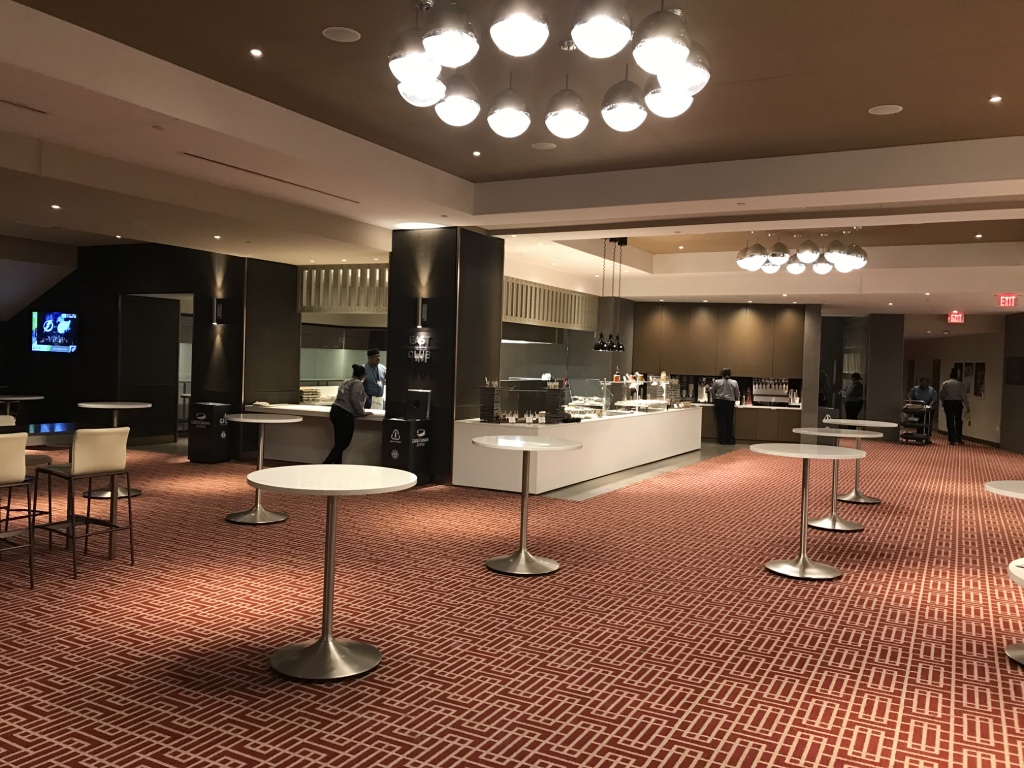 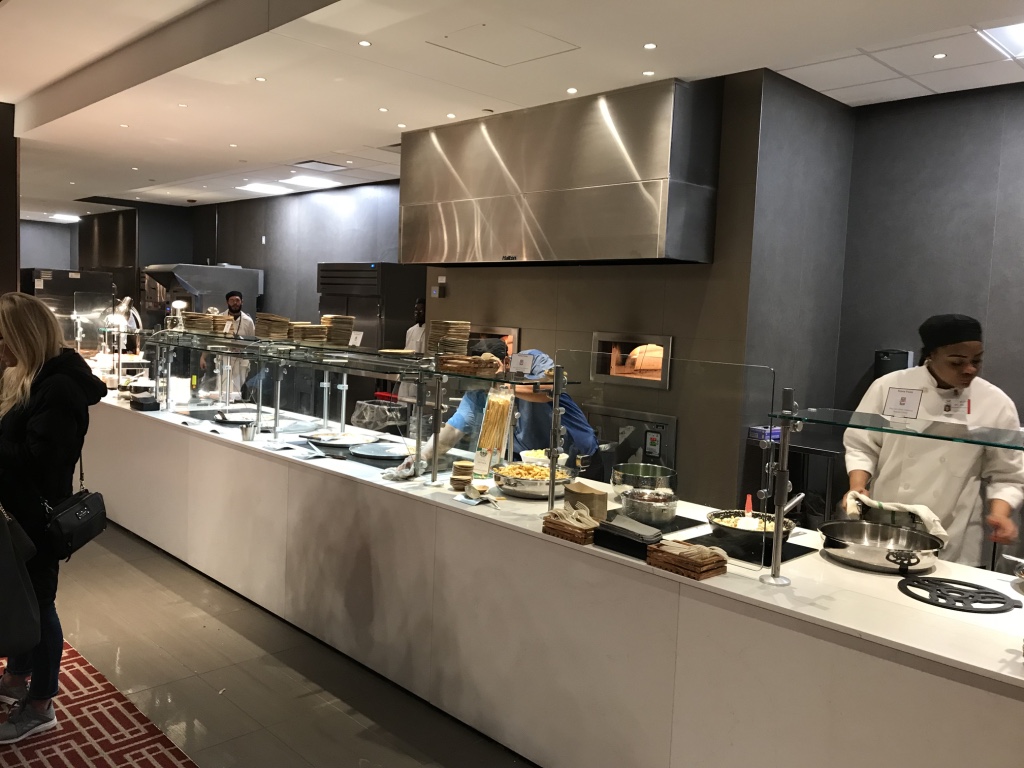 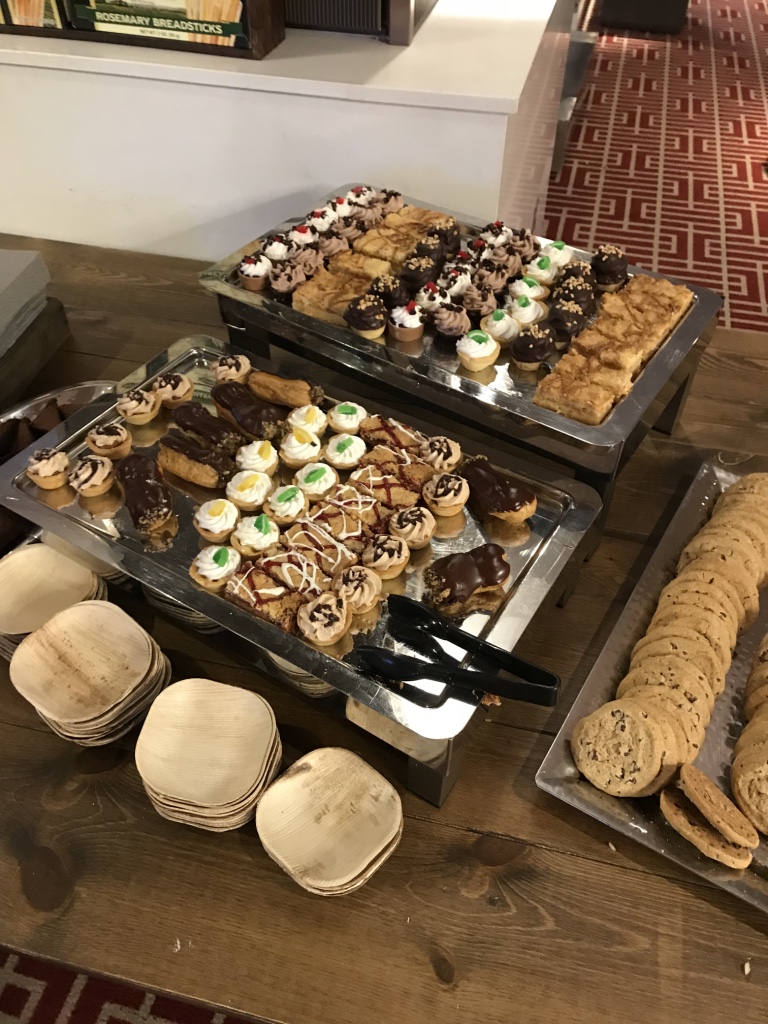 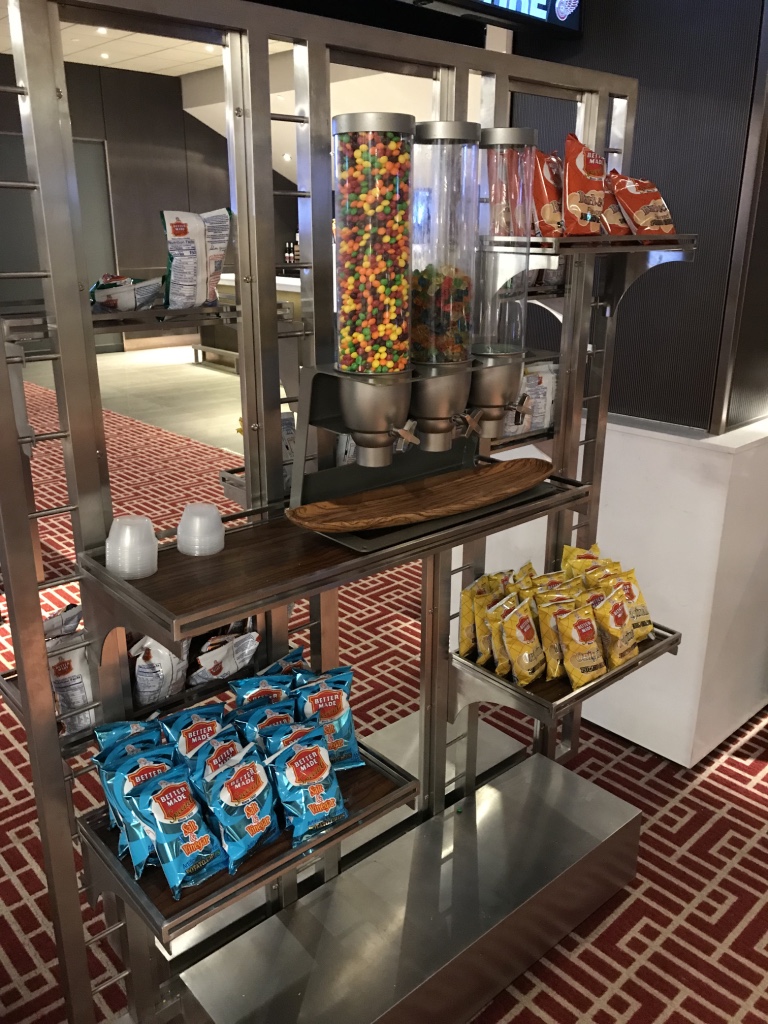 I would go back again just for the salmon. So yummy! 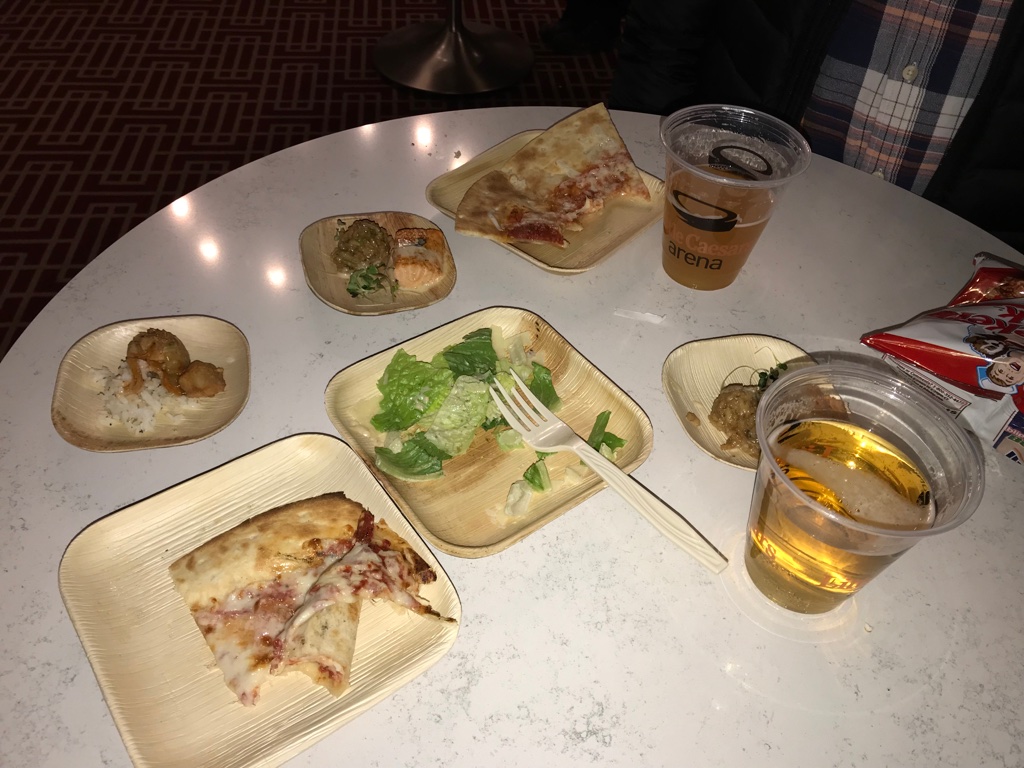 They even went with nice, classy wristbands instead of the kind you might get at a church festival. 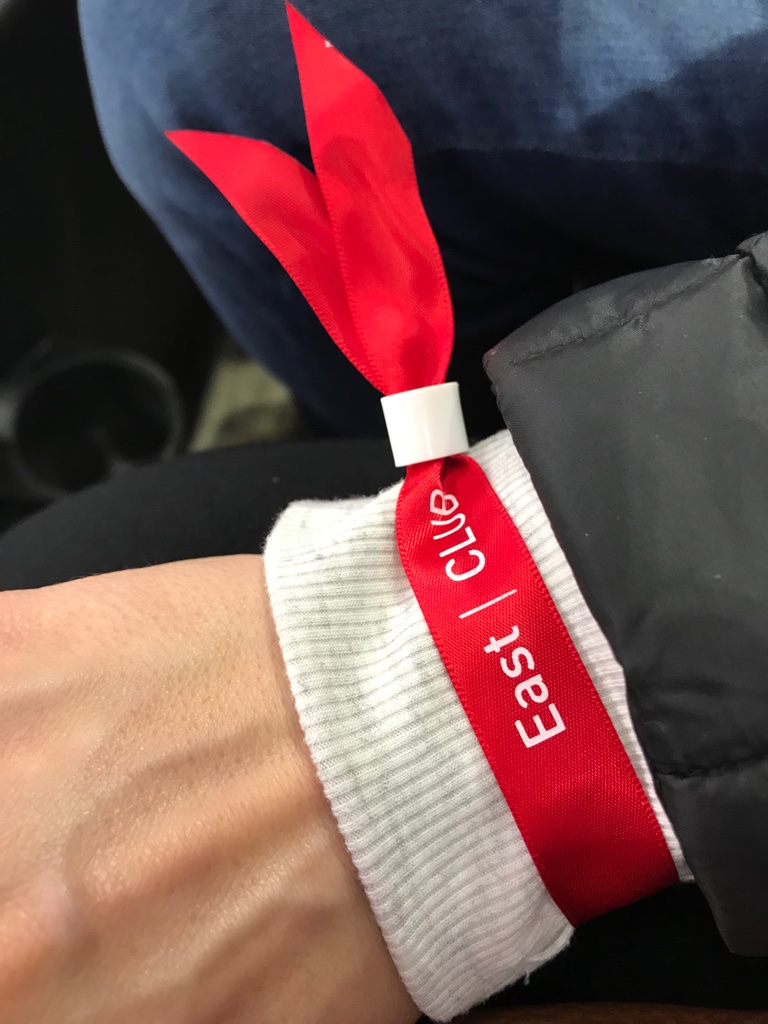 Oh, and we did watch the game too. For a little bit. Our seats were pretty awesome! 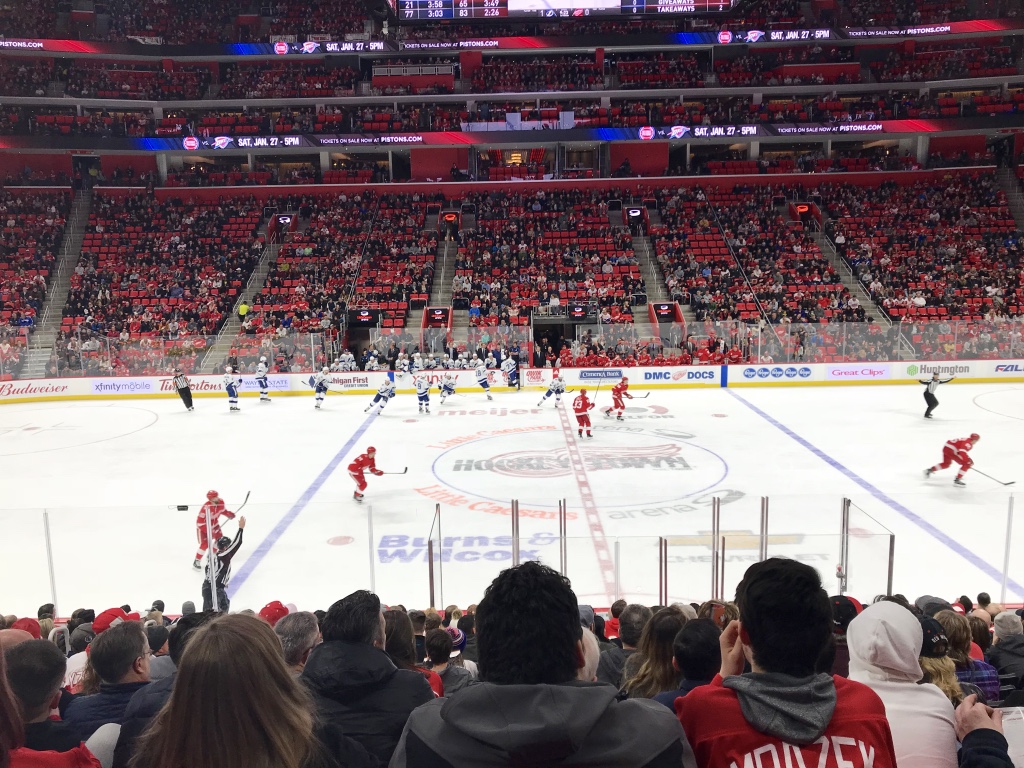 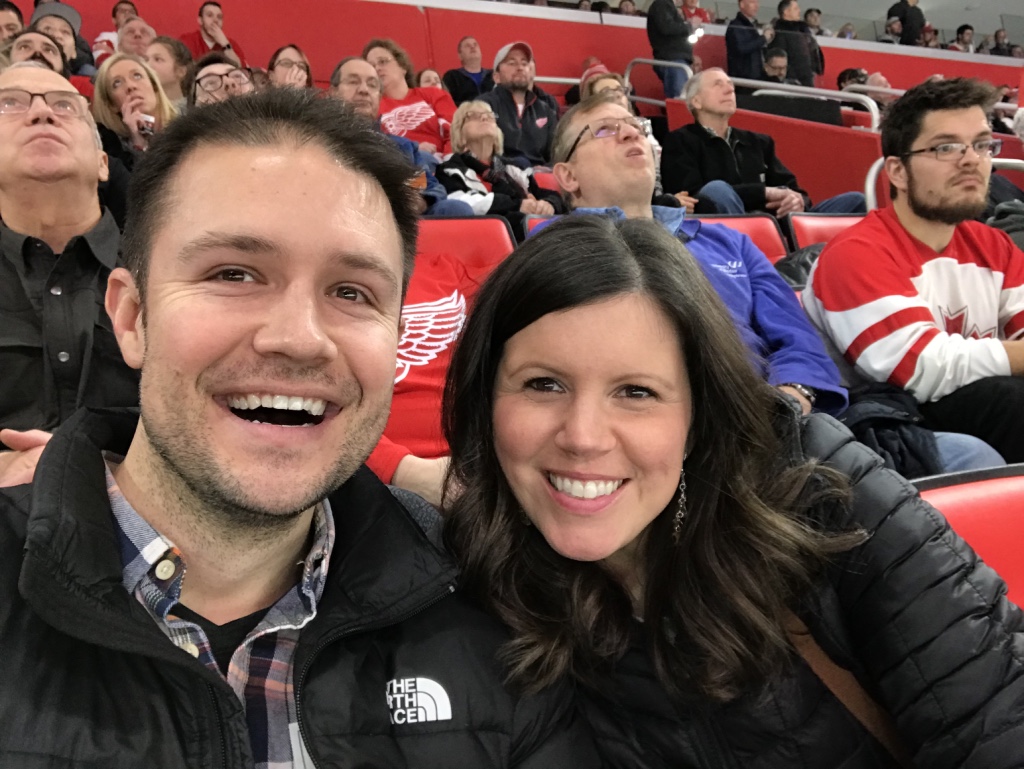 Something happened to both of us immediately upon entering the East Club. We didn’t care how many calories we were consuming; we were going to enjoy all of these special treats! What should you do after eating pizza, salad, and salmon? Enjoy an entire bag of white cheddar popcorn with your beer, duh! 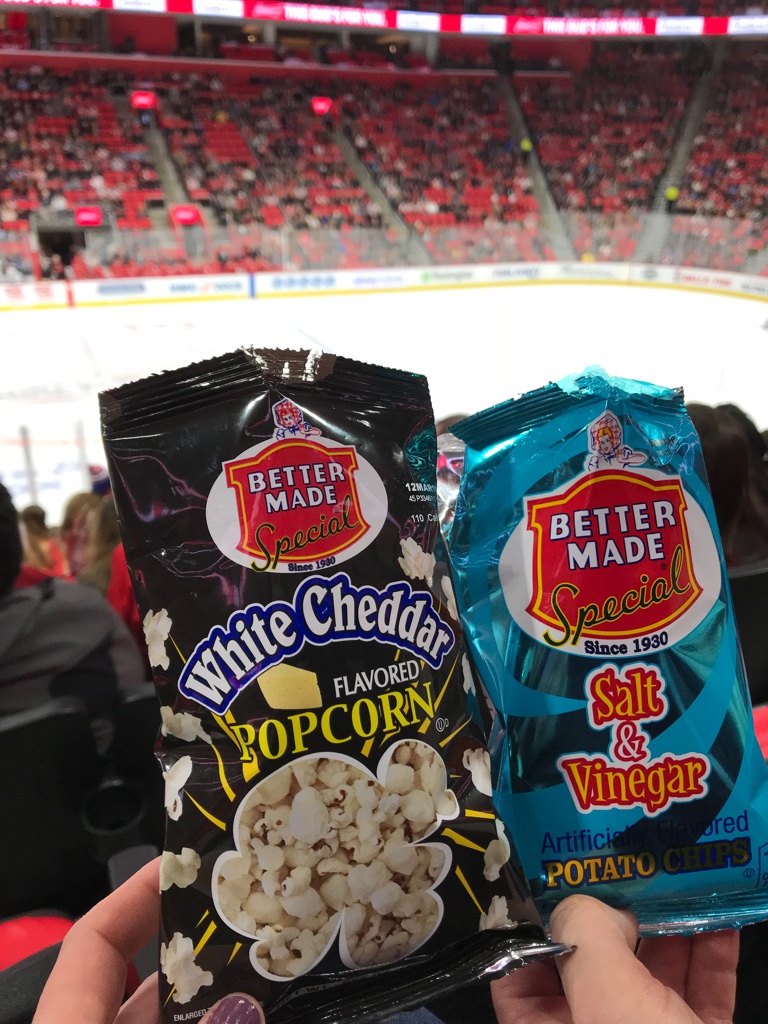 And then go back in after the first period and make an amazing dessert! 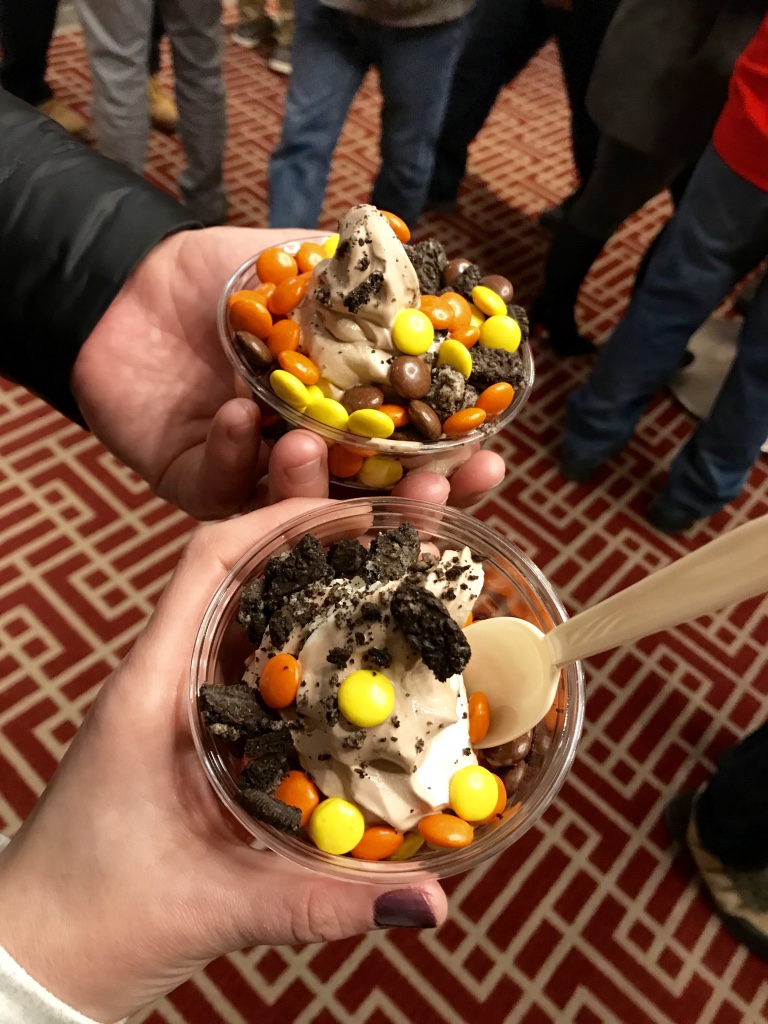 I don’t know how much our tickets cost the vendor, and I probably don’t want to know! We had such a great night and were so lucky to get these tickets! Also, huge hockey fans that we are, we left halfway through the second period to beat the traffic and be home in time to watch a few episodes of Shameless before bed. #winning 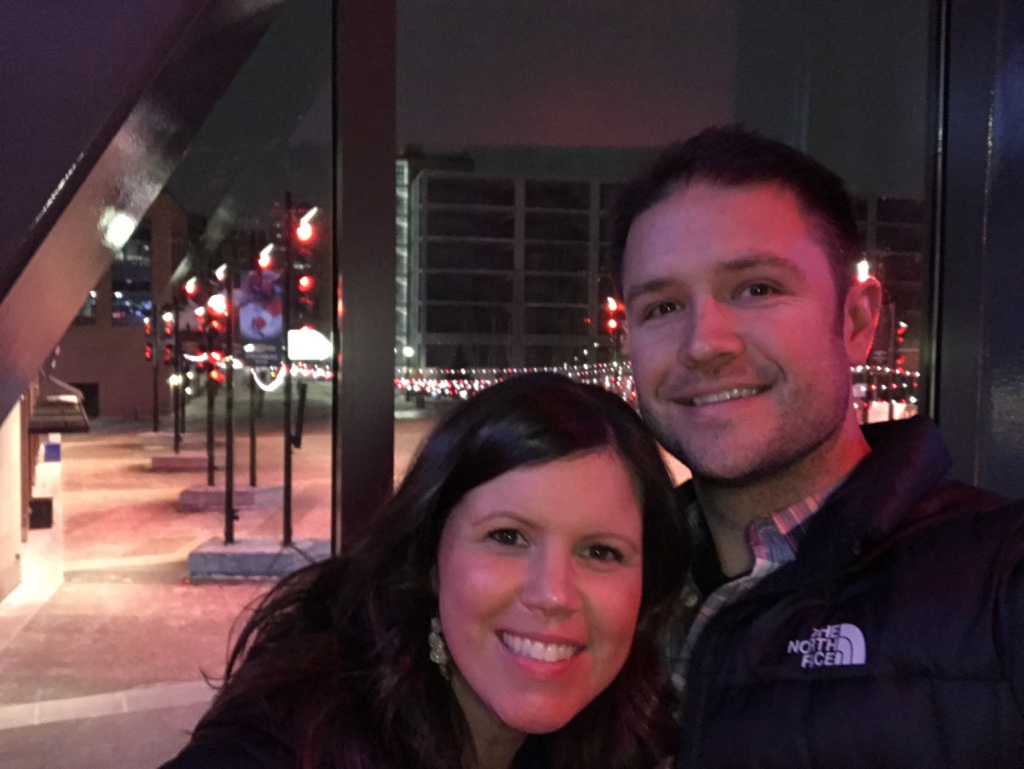 While we were living it up at the game, this sweet girl was snoozing away at Grandma Ri’s . . . and developing a bad cold of her own. #ugh When I picked her up on Sunday morning, it was in full effect. 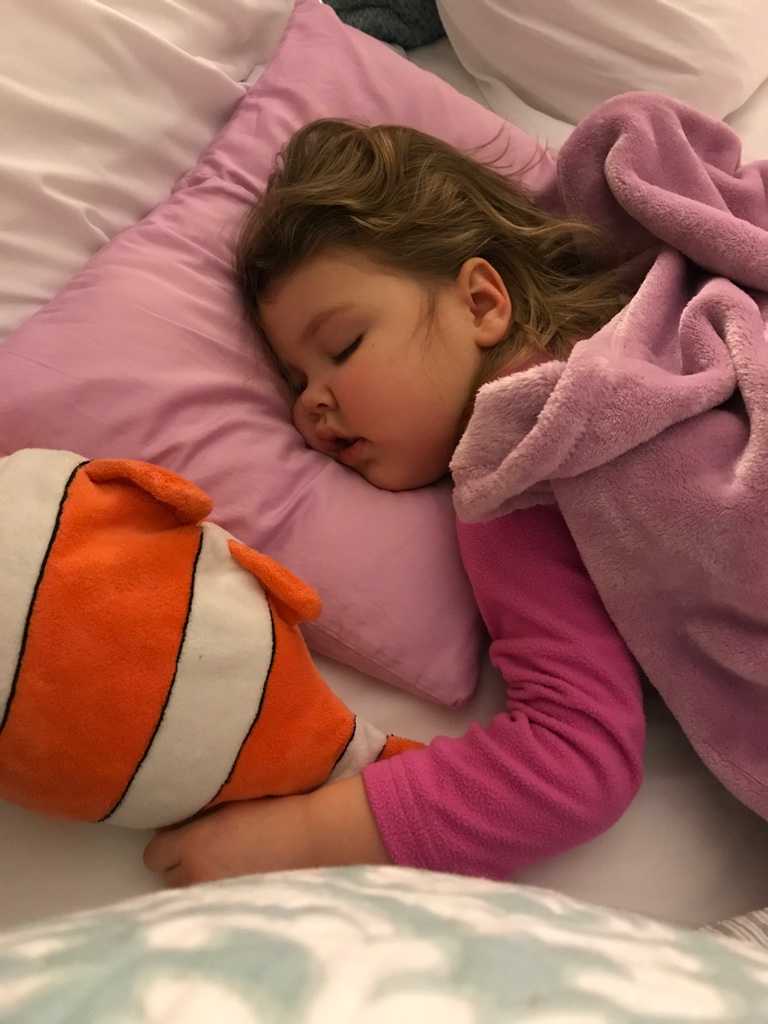 And this one was having fun with Gordie! She apparently also went crazy for spaghetti and meatballs for dinner, but I forgot to get that picture from my mom. 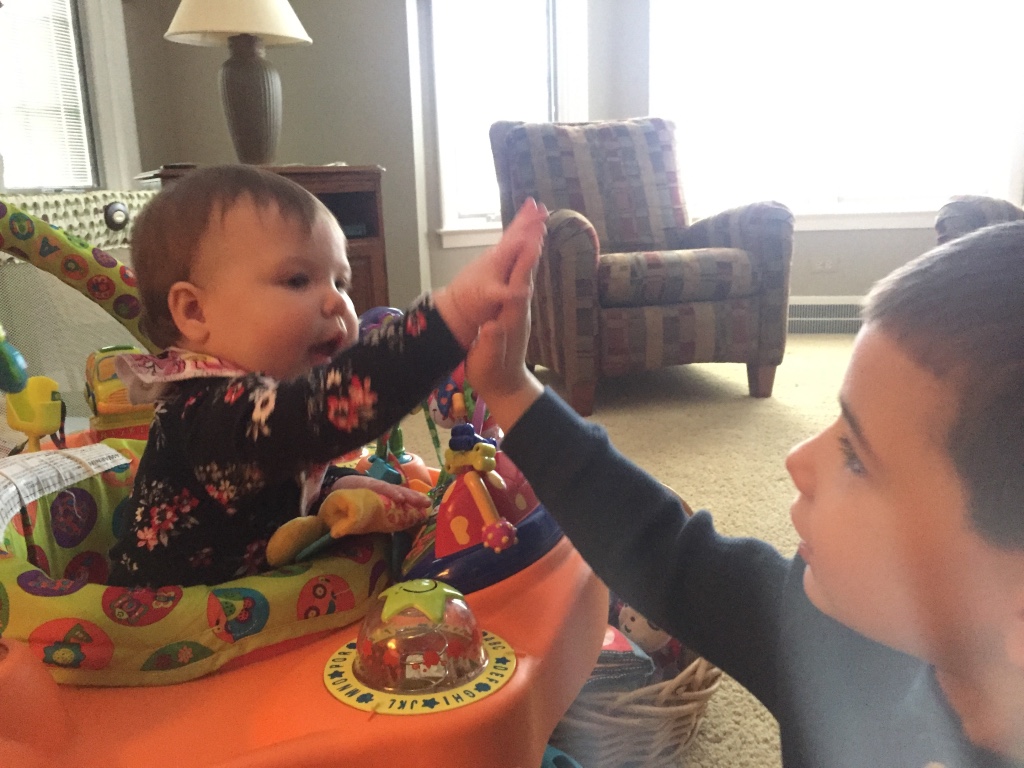 Matty took yesterday off of work, so that made our weekend even better!
All good things must come to an end, though, and it’s back to reality with two sick girls and a sick hubby. Yep, that’s right, Matty started not feeling well yesterday.
Now, normally I would post something like this: 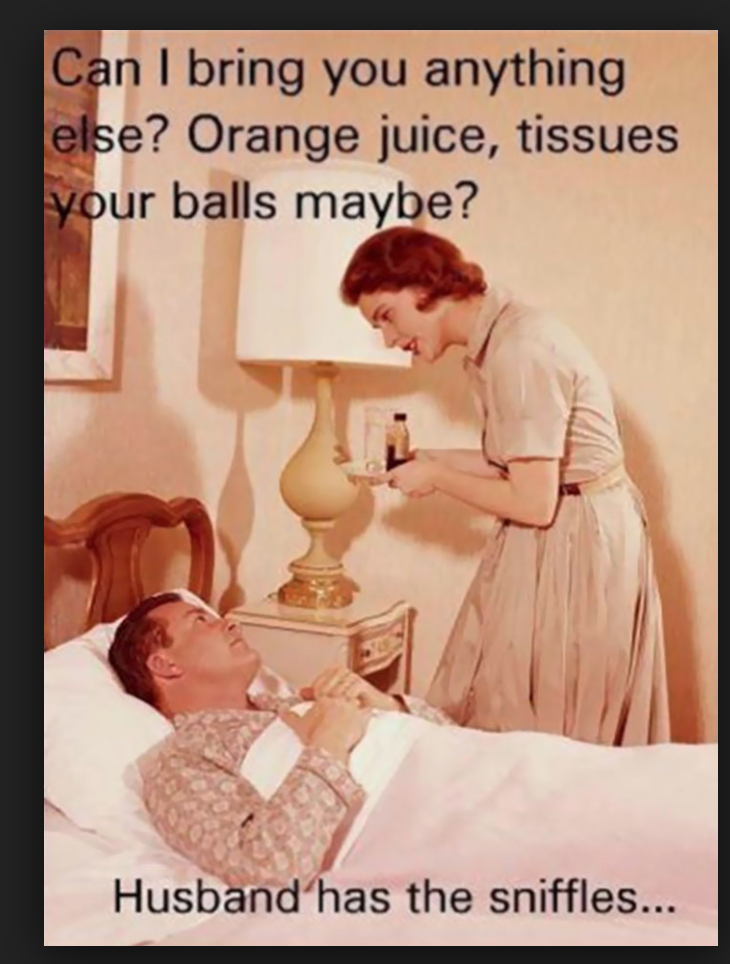 But that was 2017 Molly. The Molly of 2018 is going to have compassion for her poor, sick husband and relieve him of some of his daddy/hubby duties to help him feel better. #resolutions
It might be a long week. We’re having a heat wave, though, so there’s that!
Have a great week!
XOXO