This is a direct quote from the end of my previous blog post:
“So that’s about it. Here’s hoping the week goes by quickly and that we all have a healthy, happy reunion!”

1. The week was never ending.
2. The reunion might be happy and healthy, but the in between sure as hell wasn’t!

I’ve been going back and forth, and I really think the only way to lay things out for you is by giving you a timeline.

Monday
7am: Lucy and I drop Matty off at the airport for his Mexico trip. Emily stayed the night at my parents’ house Sunday and was going to stay Monday as well.
7:30pm: After a fun-filled day, Lucy goes down for bed without a fight.
10:00pm: After doing too many chores and not enough relaxing, I text Matty goodnight and head to bed.
10:45pm: Yep, only 45 minutes later I wake up and think, “Hmm, my tummy feels weird. Uh oh . . .”
11:45pm: After my second episode of vomiting/diarrhea, I know I’m in trouble and I call Rita from the bathroom floor. Previous experience has proven that I have a tendency to pass out as the episodes continue, and it’s just not safe to be alone with a toddler if that happens!
11:45pm-4:30am: I continue to die a slow death. I’m not kidding. I think I had four more episodes. Maybe five. You’d have to ask Rita, except she’s probably blocked it out of her memory already.
Tuesday
6:15am: My phone rings and it’s my dad. I had sent my mom an email around 5am letting her know what was happening. I assumed he was calling to check up on me. FALSE! He knew nothing about the email, but was calling to tell me I was going to need to pick up Emily because my mom had been sick all night too!
So, I was still barely alive. The nausea wouldn’t quit, the fever, chills, and body aches were no joke, and my sweet baby was now stuck at my parents’ house with only my dad as her caretaker. He has two children and five grandchildren, and I don’t think he’s ever changed a diaper!
6:30am: There’s only one person who can calm me down, so even though it’s only 5:30 in Mexico, I call Matty. Turns out I didn’t wake him up because he was up all night with the flu too! Alone . . . in his hotel room . . . in Mexico!
This news does not calm me down. Rita comes in to check on me and grabs her phone on the way. She has a text from my brother-in-law, Brian, that Sarah has been super sick all night long and that Rita should bring Lysol wipes with her later that day. Ohhhh . . . did I forget to mention that Rita was scheduled to fly to Bloomington Tuesday evening to stay for a week?
HOW IS THIS HAPPENING????!!!
So over the next few hours, Rita occupied Lucy and we tried to figure out how to get Emmy back to our house. Carla went over to my parents’ house for a few hours to play with Emmy and put her down for her morning nap. 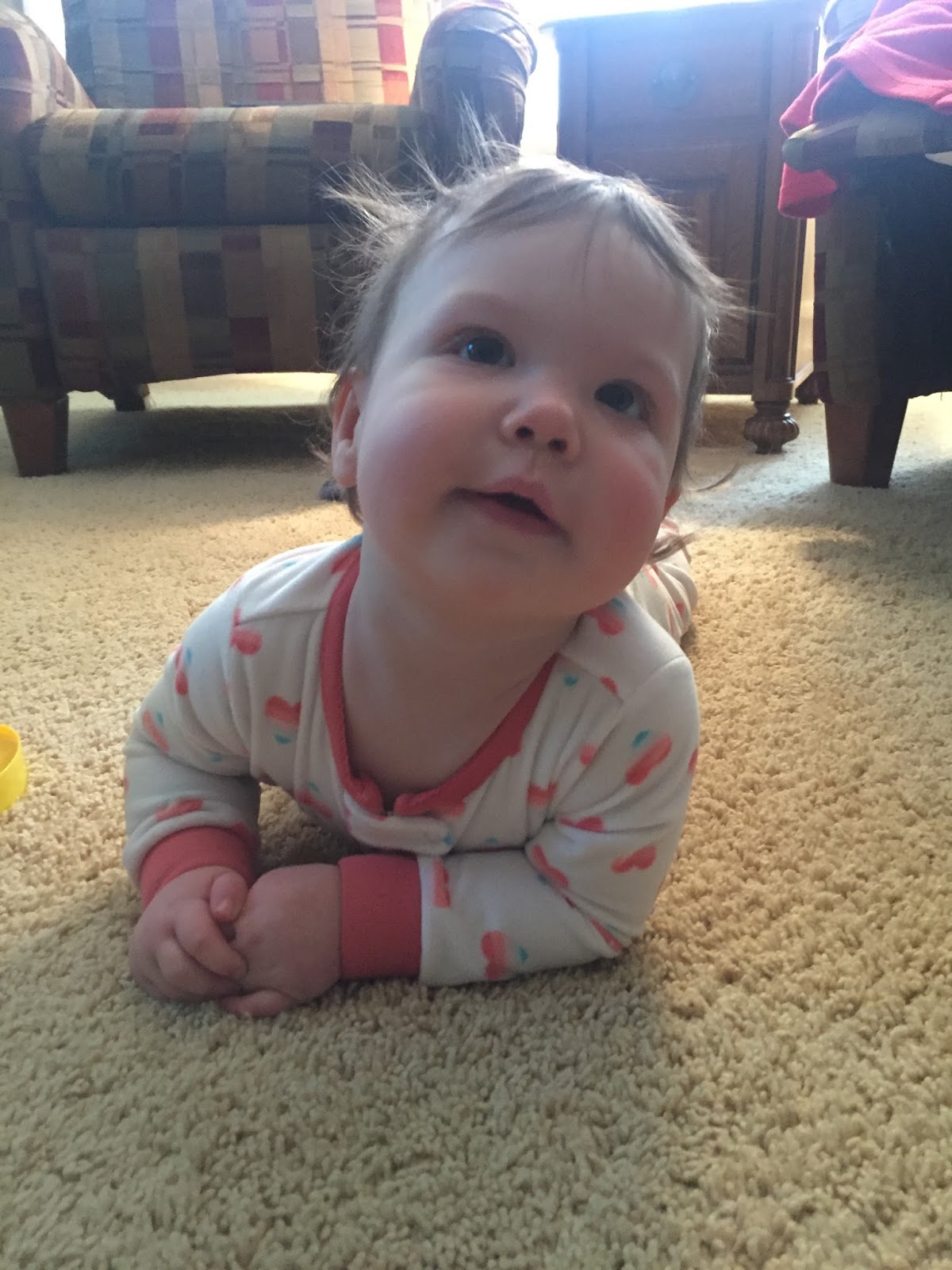 The plan was for my dad to drive her out to our house once she woke up . . . but then my dad started not feeling well! We were dropping like flies! Carla saved the day and loaded Emmy and all of her stuff up and drove her home.
So now I’m still feeling awful in bed, and Rita had to survive the next six hours until bedtime with the two girls. And she handled it like a champ! I just laid in bed feeling awful, worrying about Matty in Mexico, feeling guilty that Rita had to cancel her trip to Bloomington, and scared to death that one of the girls was going to get sick. Or, worse yet, that Rita was going to get sick before I was well enough to care for the girls. Not exactly the recipe for a restful recovery.
Bath and bed time was a little tricky, and I did get up to help at one point. Lucy was getting tired of having to stay out of my room and wanted to snuggle with me. My mama heart was breaking, but this was the best I could do. She got to sit in her chair (away from my bed) and watch a Bubble Guppies. 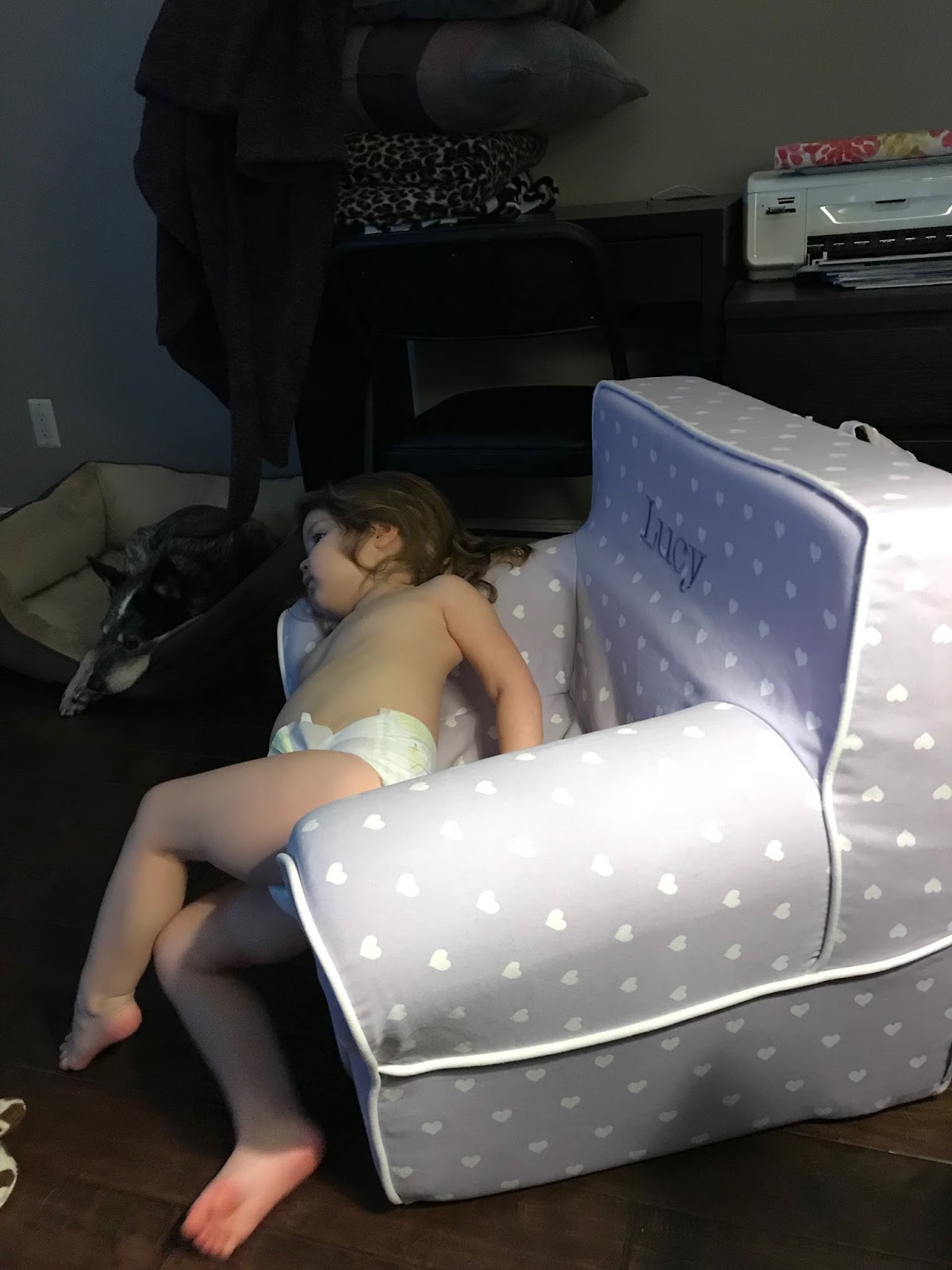 9:00pm: Both girls are sound asleep, and I am finally able to drag myself out of bed and shower which felt amazing. I took some Tylenol and headed to bed and got a fairly good night of sleep.
Wednesday
6:30am: I wake up feeling MUCH better. Matty calls to check in and says he is feeling better as well. The girls wake up happy and healthy. We’ve made it through!
In the meantime, though, we’ve lost my Aunt Donna, Brian, and my nephew Andy!
And that’s it. On Wednesday, I was able to be up most of the day and play with the girls and help Rita out. Matty was able to go in to the plant in Mexico. It really was just a 24 hour bug . . . but the worst 24 hours ever!
A special shout out to my friend, Bridget, who went out of her way to drop off Gatorade, Pedialyte (just in case the girls got sick), water, and a thermometer for us!
And the award for the best immune system goes to . . . RITA! She is still going strong with no signs of flu like symptoms . . . even after being in the trenches with me for hours.
Matty comes home today, thank goodness! I’m thinking we are in need of a nice, relaxing, low-key weekend.
Sorry there weren’t a lot of pictures but, trust me, there was nothing worth photographing!
Have a great weekend! Stay healthy!
XOXO