We visited Santa this past weekend, and it really couldn’t have gone any better. I’ve been looking forward to/dreading this for a few weeks now. Lucy had been saying that she didn’t want to sit on Santa’s lap. At first, I thought I’d go all tough love and just put her on his lap anyway, but then I remembered that she’s a freakishly strong temper tantrum throwing toddler drama queen and decided it was probably best not to force her . . . this year.
We usually go to Three Cedars in Northville because they have a great Christmas experience set up while you wait in their perpetually long line. They do a great job, but after seeing lots of other people’s Santa pictures, it seems as though Three Cedars are always a bit dark because they are taken upstairs in a barn. So, we decided to go to Ray Hunter Florist down by my parents’ house . . . and it was fantastic!
We arrived about 45 minutes after Santa opened up for business . . . and we were the only ones there! The shop was so festive and had loads of Christmasy things to look at. 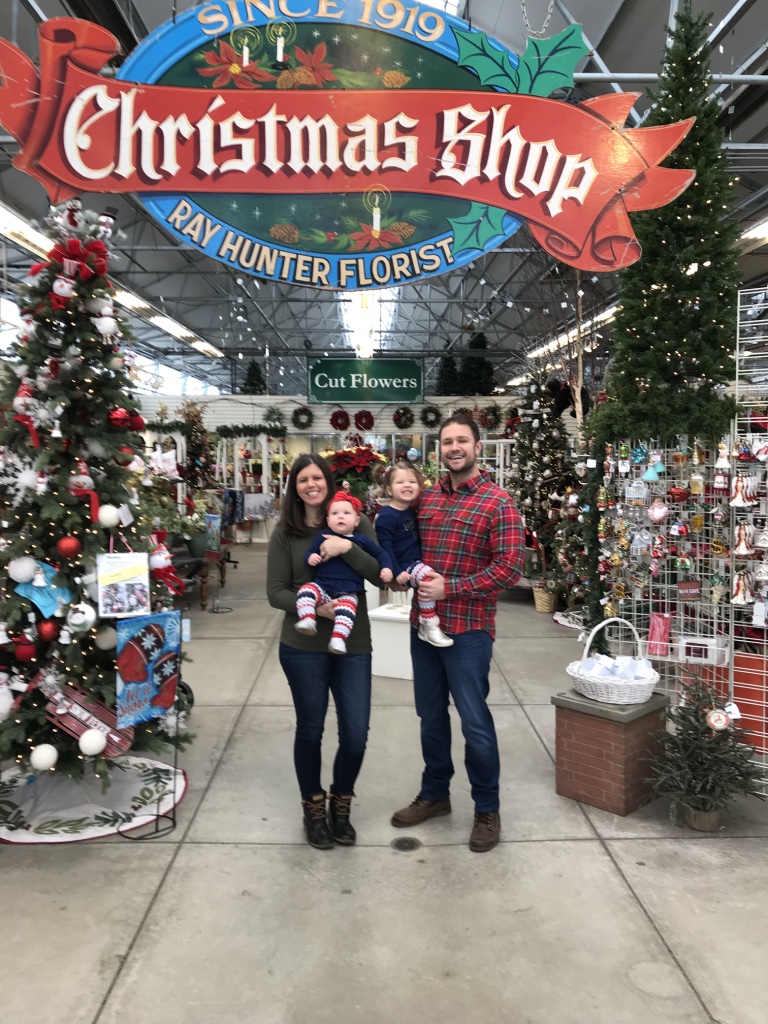 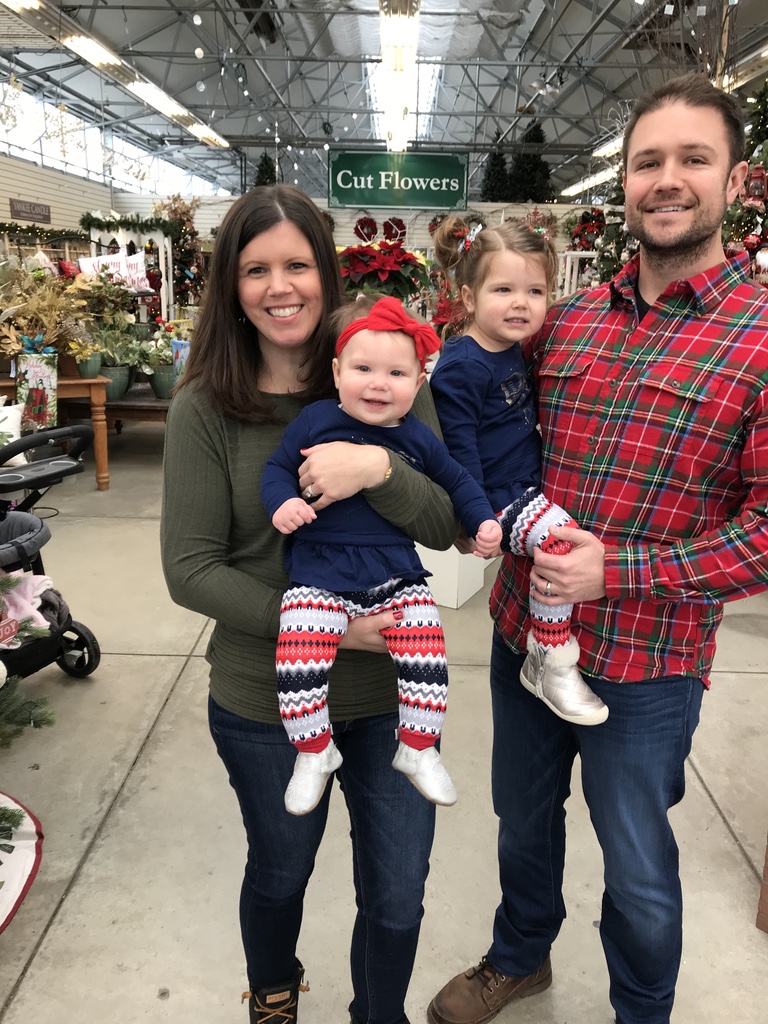 We chatted with Santa for a few minutes before taking the picture. 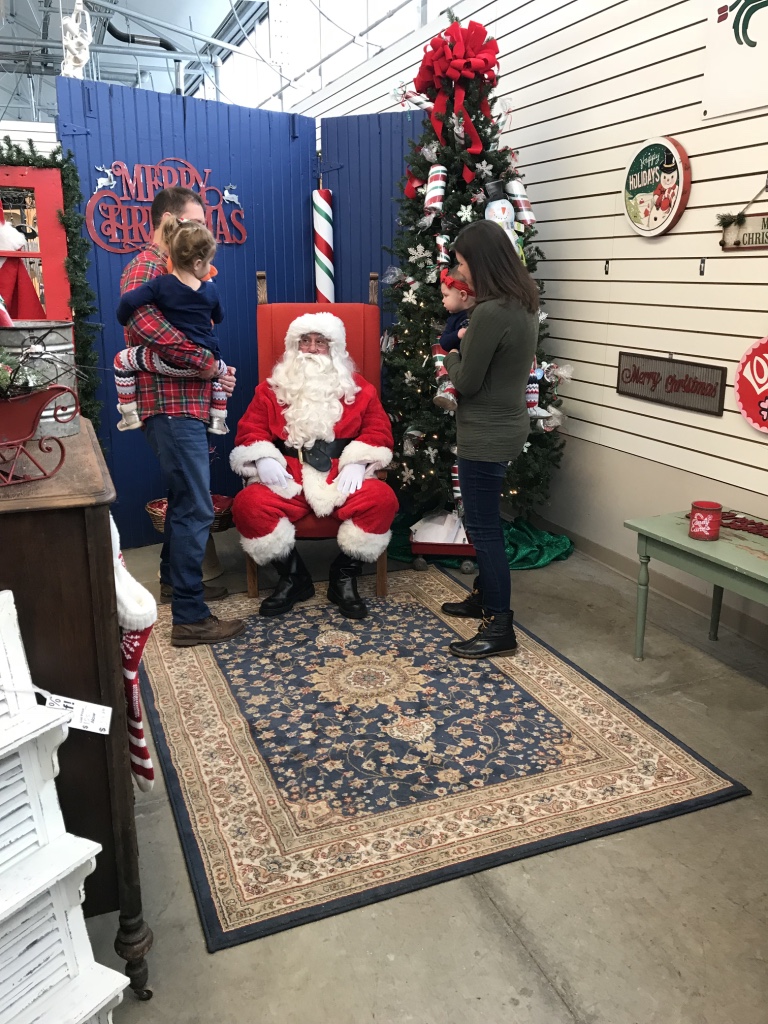 Matt and I anticipated each holding a girl and standing next to Santa . . . but the big guy himself had other ideas! We were a little unsure about it, but onto his lap we all went! haha 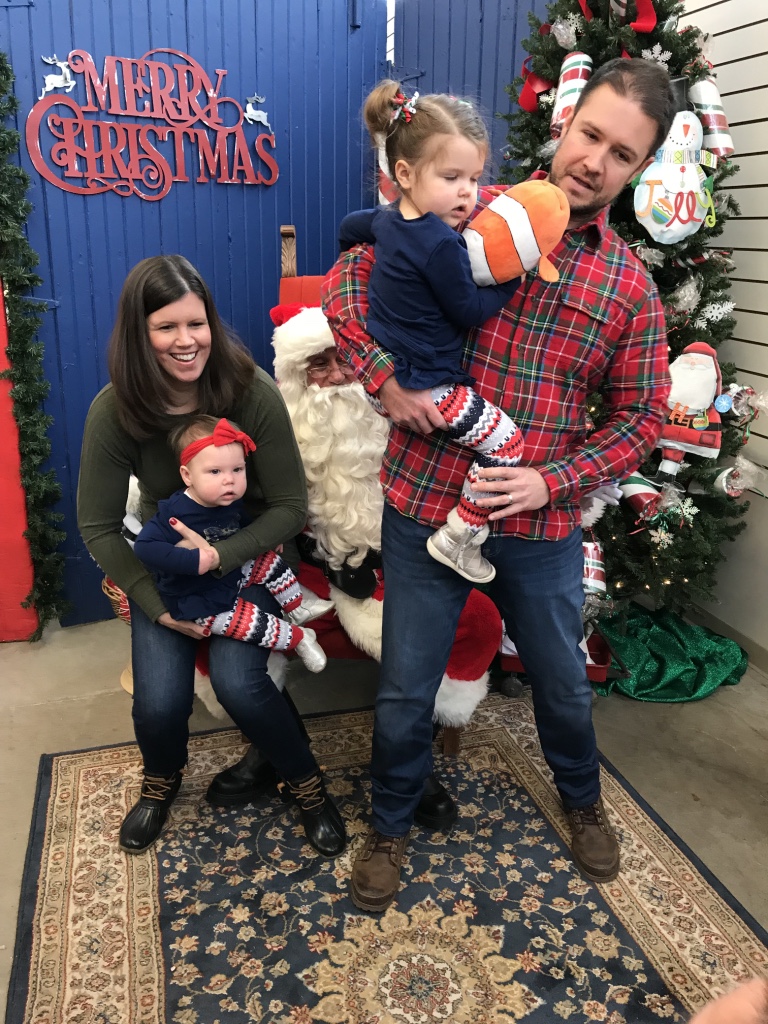 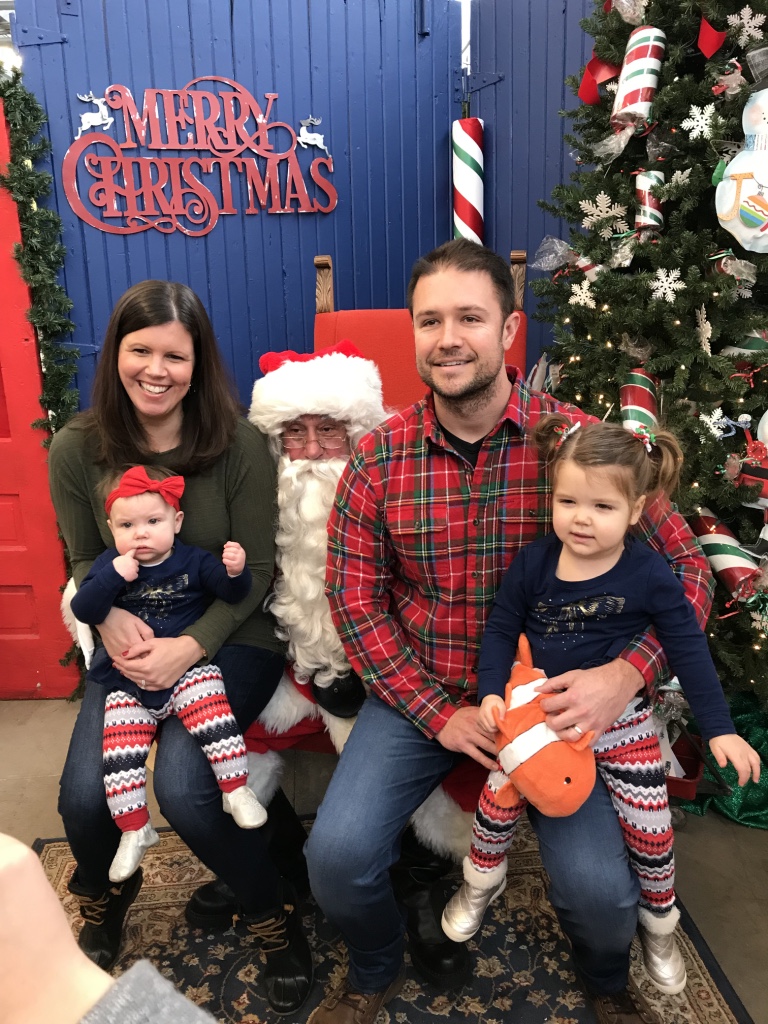 Since we were still the only ones there, Santa used a candy cane to convince Lucy to talk to him a bit. I was so proud of her for talking to him! She asked for a car seat for her baby, a baby high chair, and a pair of princess sunglasses. #done #done #anddone 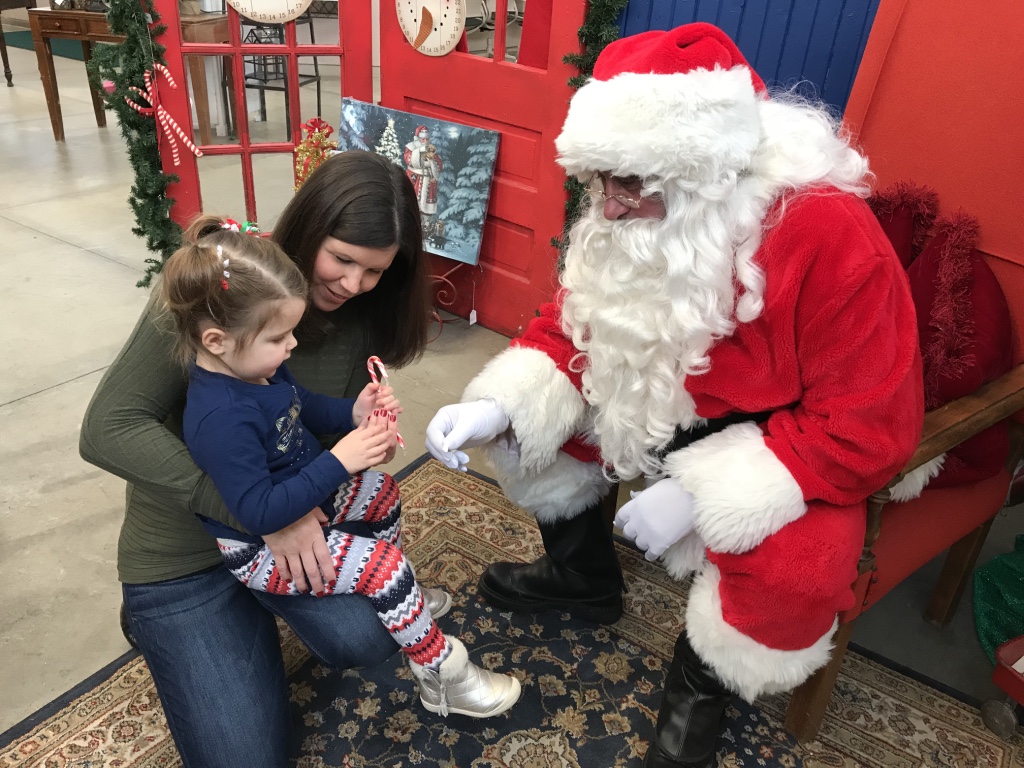 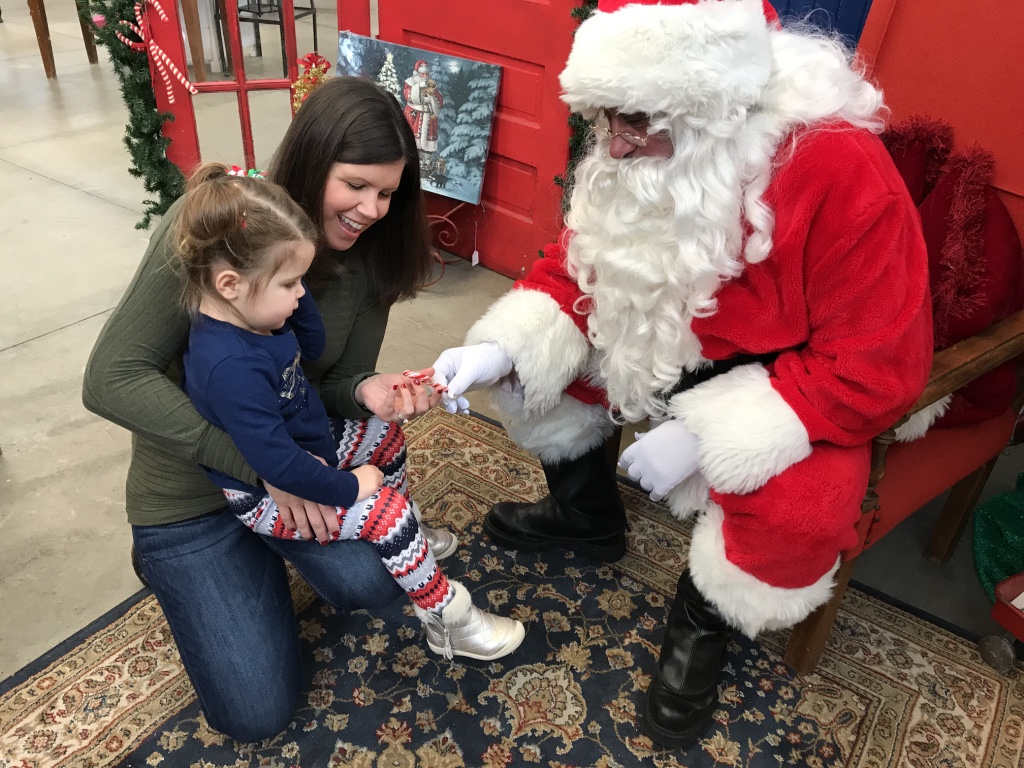 And then since were STILL the only ones there, we posed with the grandparents as well! My dad asked for a cottage . . . for like the thirtieth year in a row. #stillonthenaughtylist 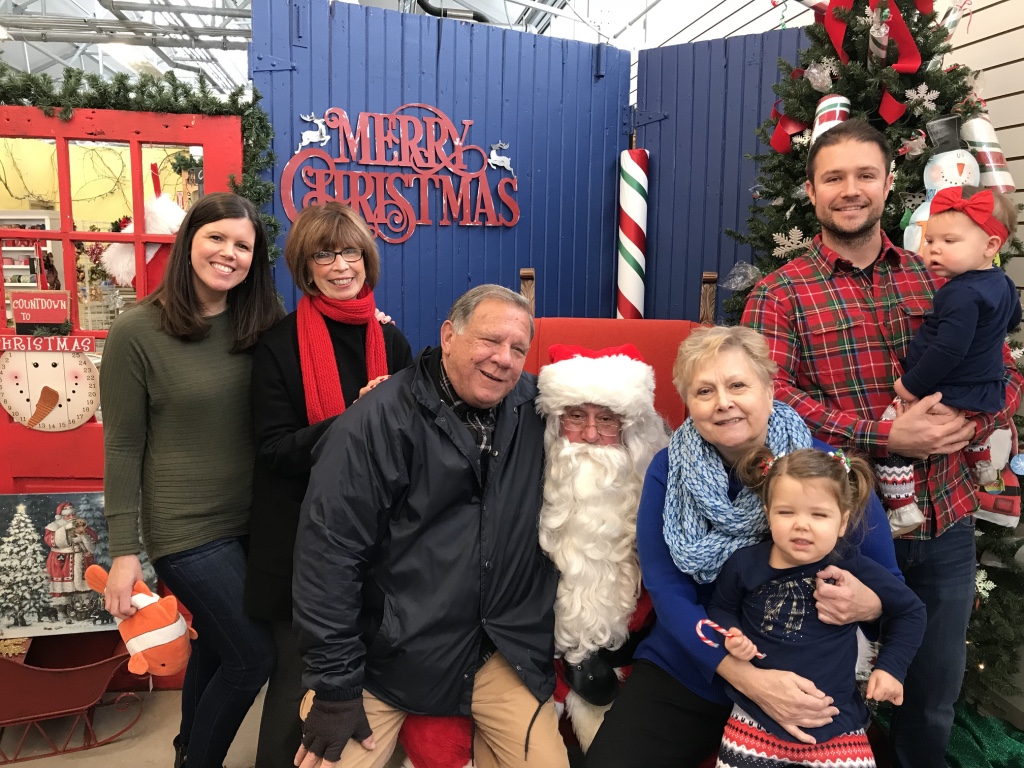 And since we were STILL THE ONLY ONES THERE . . . I decided to plop Miss Roses onto Santa’s lap and see what happened. 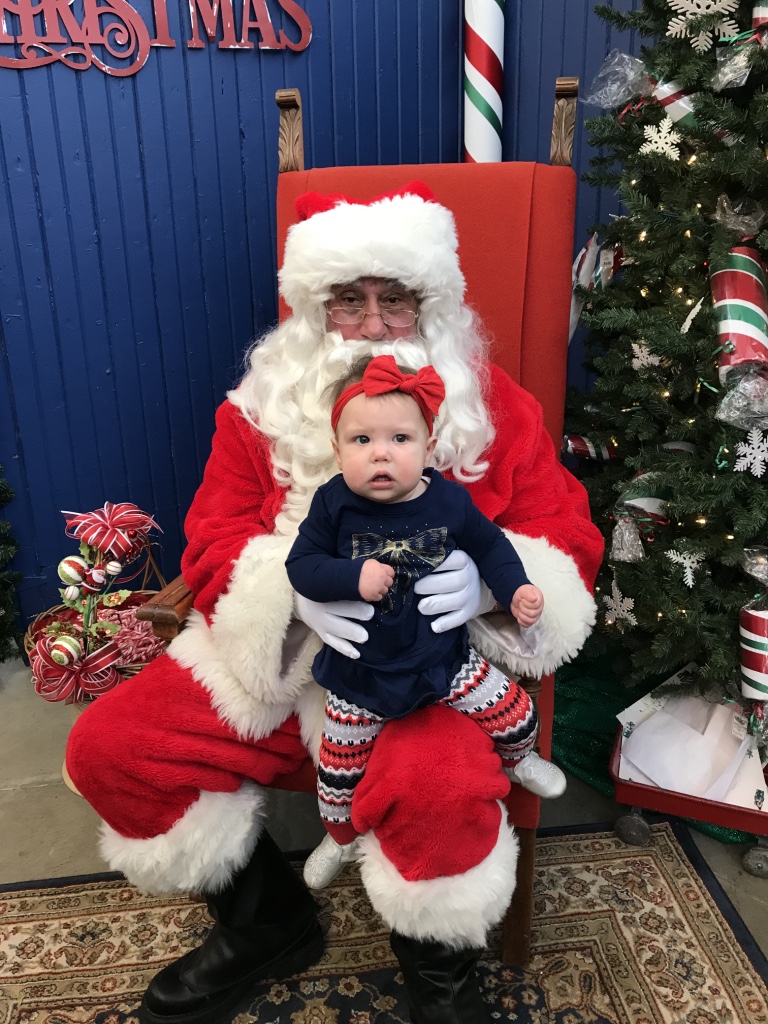 She didn’t love it. 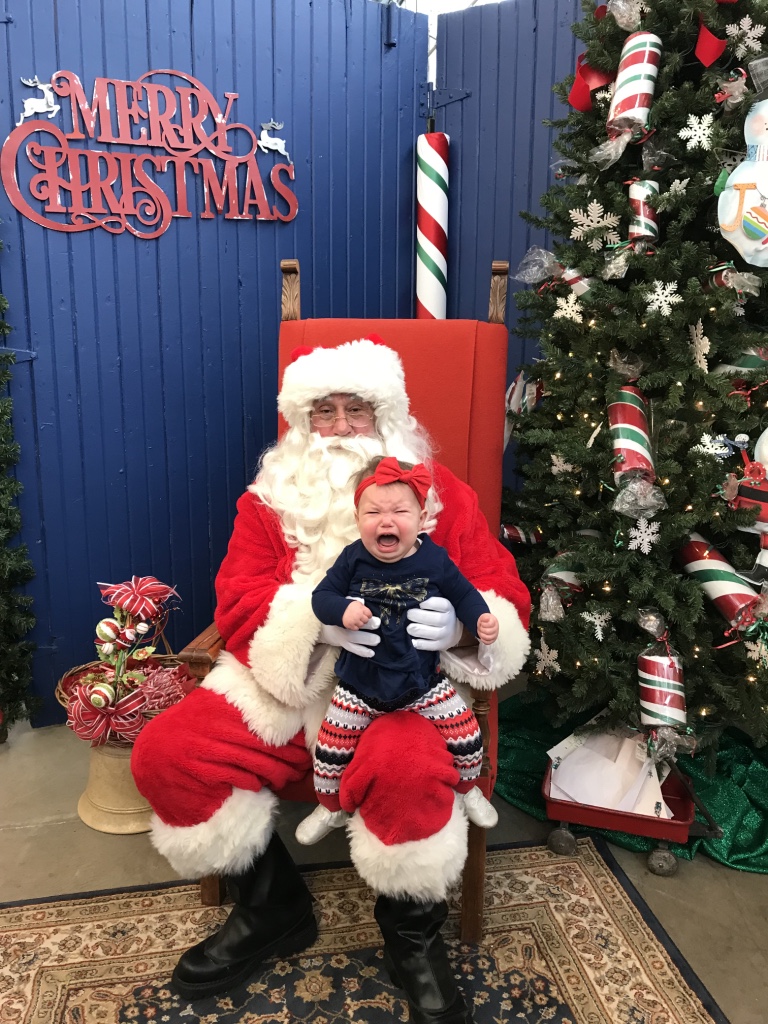 Lucy enjoyed part of her candy cane and then we were on our way. 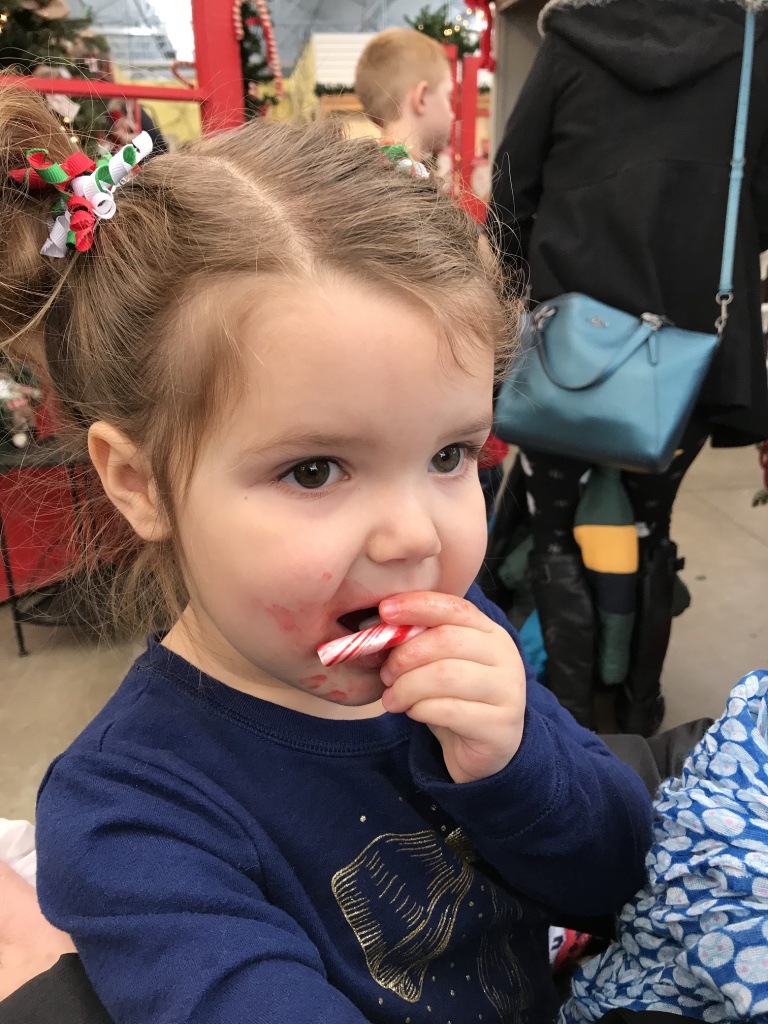 My parents were nice enough to watch the girls so Matty and I could sneak away for a lunch just the two of us. We went to a Mexican restaurant, and I had the most delicious fish tacos! 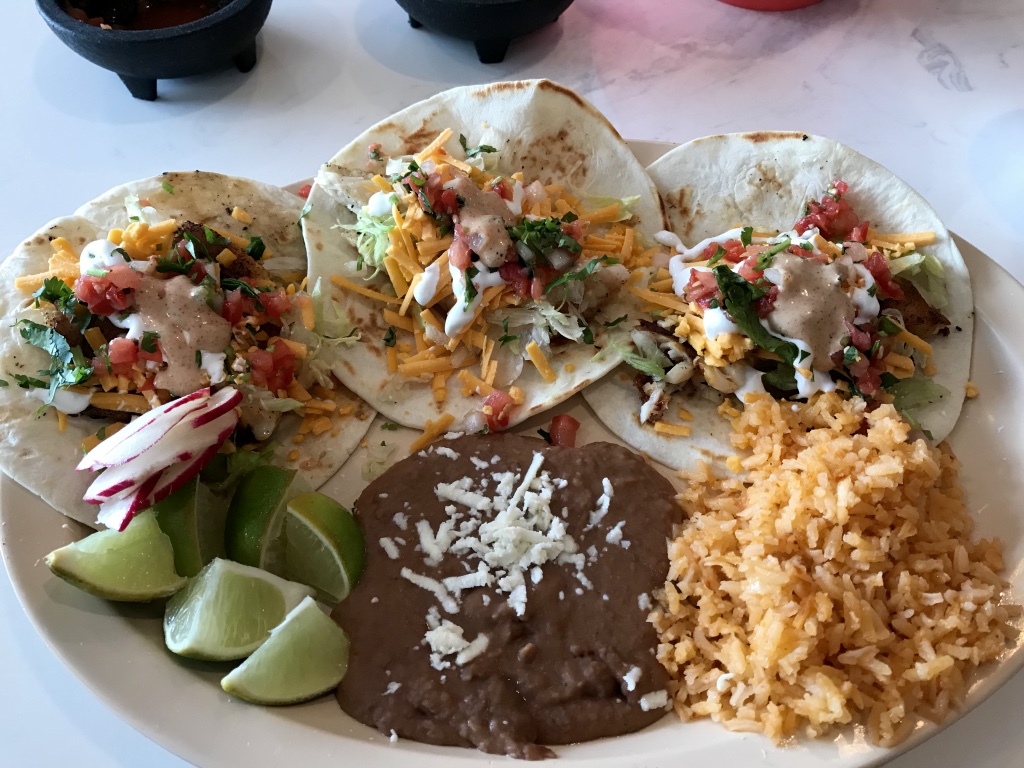 Emily was napping by the time we got back, so we hung out for awhile. Lucy got her first taste of hot chocolate with Oma and Sadie! 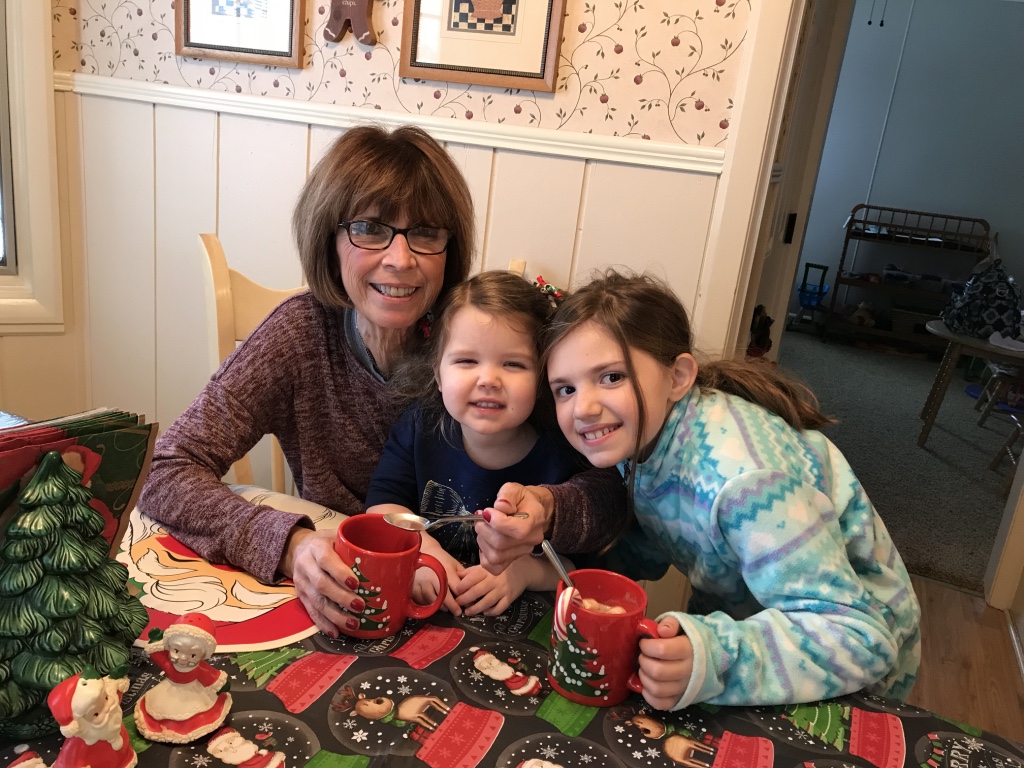 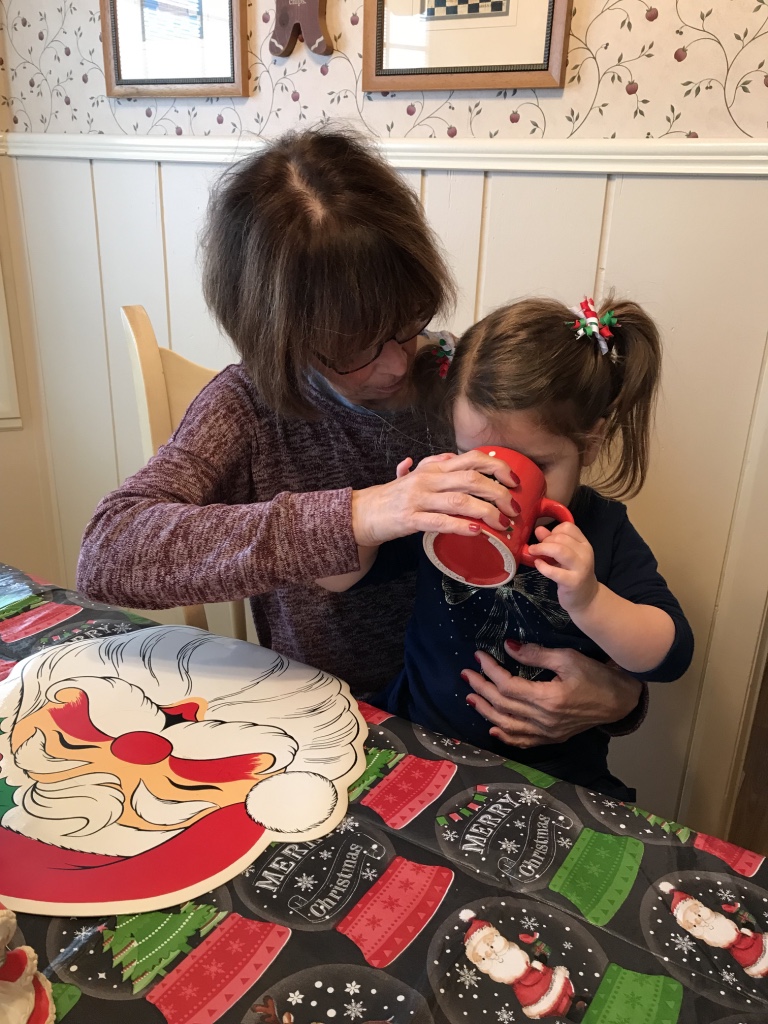 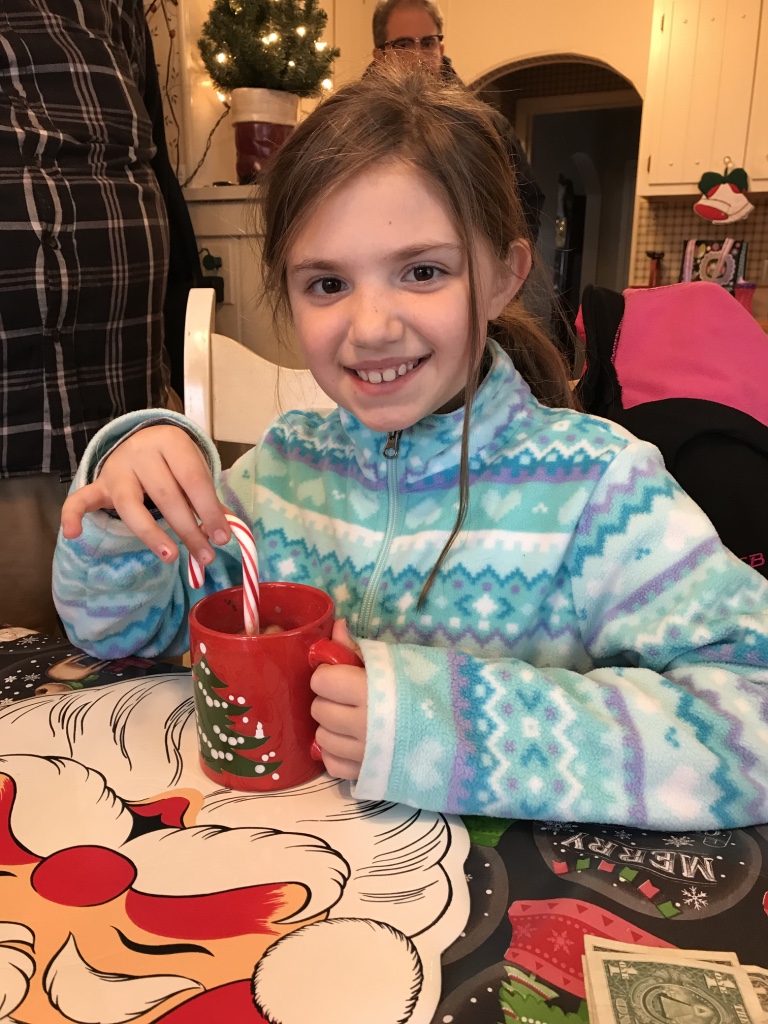 And then she rested with Matty until Emily woke up. 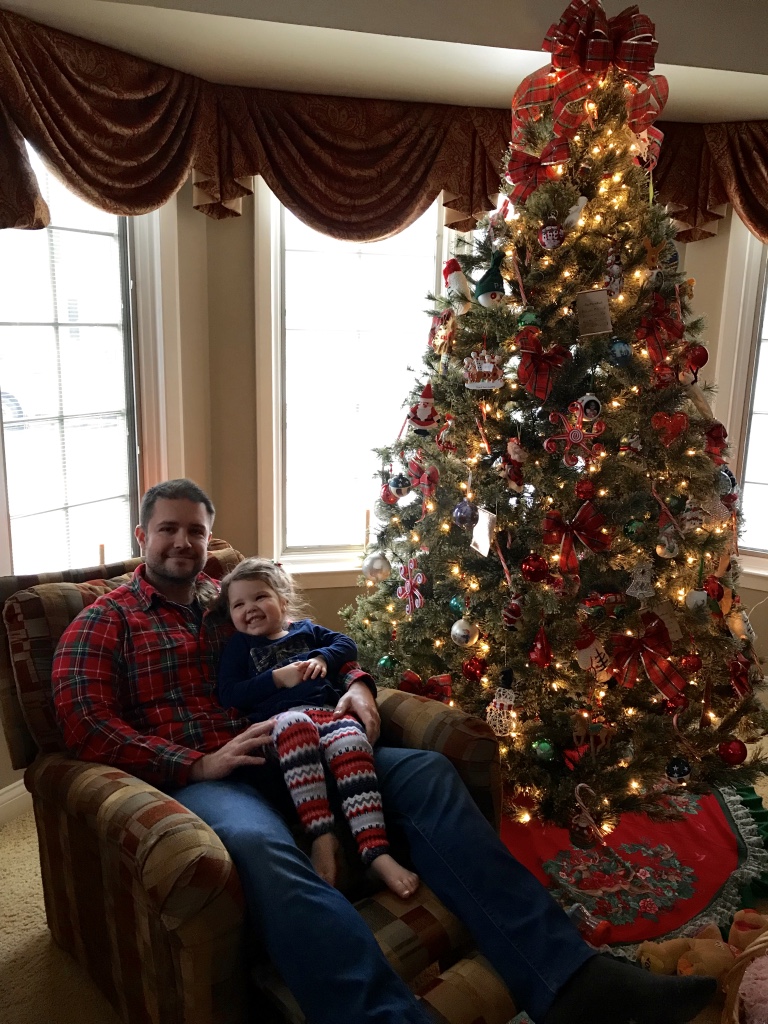 I sounded like a broken record all day long, but I kept saying how happy I was with how the visit went. I think Ray Hunter is officially our new place to visit Santa!
And just for fun, here’s Lucy’s first visit to Santa in 2015 . . . 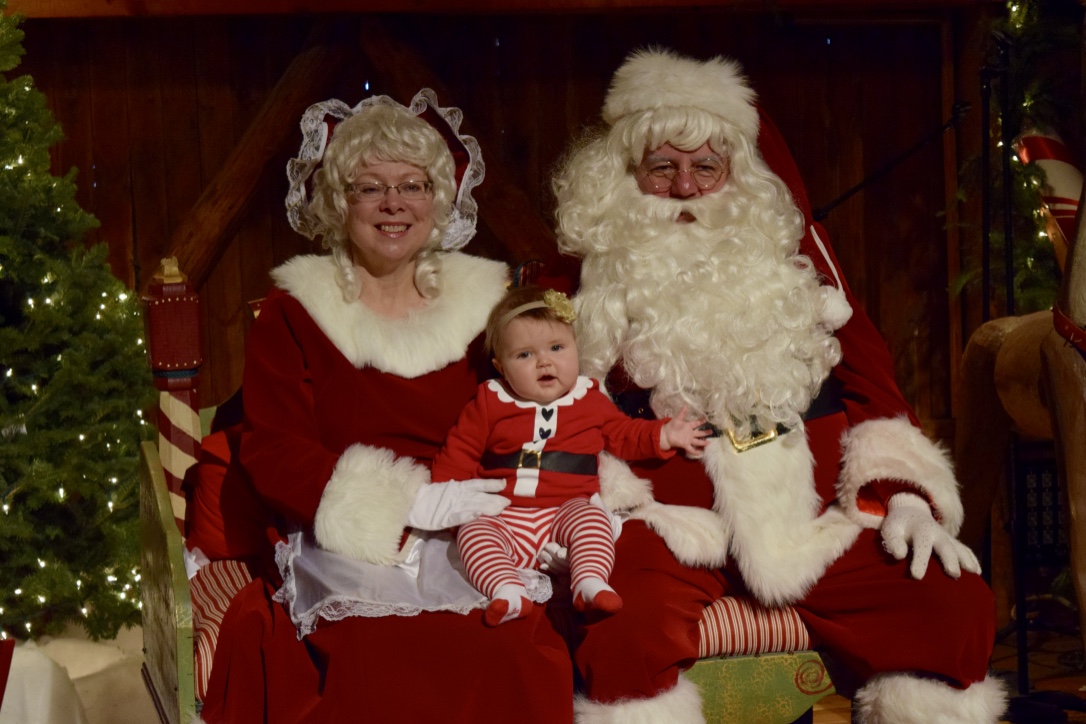 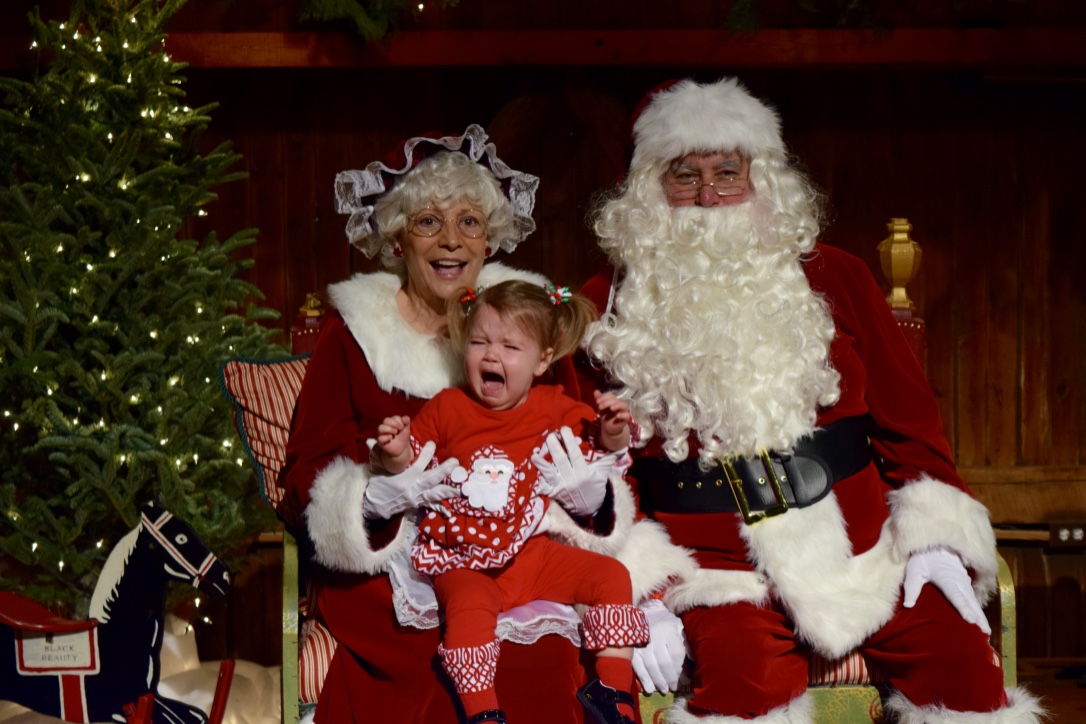 Thanks for a great visit, Santa!
Ho, ho, ho!
xoxo