It’s Wednesday night, and as I type this my hard working hubby is outside blowing away all of the snow we got today. And I’m inside huddled under the blanket with a snack. I feel slightly guilty. Emphasis on slightly. Most nights he’s relaxing on the couch and I’m finishing up chores I didn’t get to during the day. #rolereversal
We were stuck inside all day today during the snow, and several times I attempted to discuss with Lucy what she wanted to get Emily for Christmas. I’ve been doing this for several days now, and it’s going downhill fast. When I asked her a few days ago, Lucy said she wanted to get Emily her own special Nemo stuffy. (Nemo is Lucy’s absolute favorite stuffy, and the only one we won’t let Emily touch.) But faster than I could get out my “aww, how sweet,” Lucy followed it up by saying that Emily would definitely want to share her new Nemo with her big sister. #hmmmm
Yesterday when I asked her, Lucy said that she wanted to get Emily her own Minnie Mouse stuffy (Minnie is a close second to Nemo). I think this idea came from the fact that I told her yesterday that my mom was buying Emmy a Minnie Mouse stuffy. Then Lucy said that Emily would probably want to share it with her. #isenseapattern
So today when I asked Lucy what she wanted to buy for her baby sister she said, “Ummmmm nothing. I don’t want to get her anything. I don’t want to see my baby sister anymore.” #lucyscroogekissel
Oh, you just came for the pictures?? Why didn’t you say something sooner?! Here’s what we’ve been up to.
We had a playdate at Funtastic on Monday and basically had the place to ourselves. This was Emily’s first time, and I think she liked it! 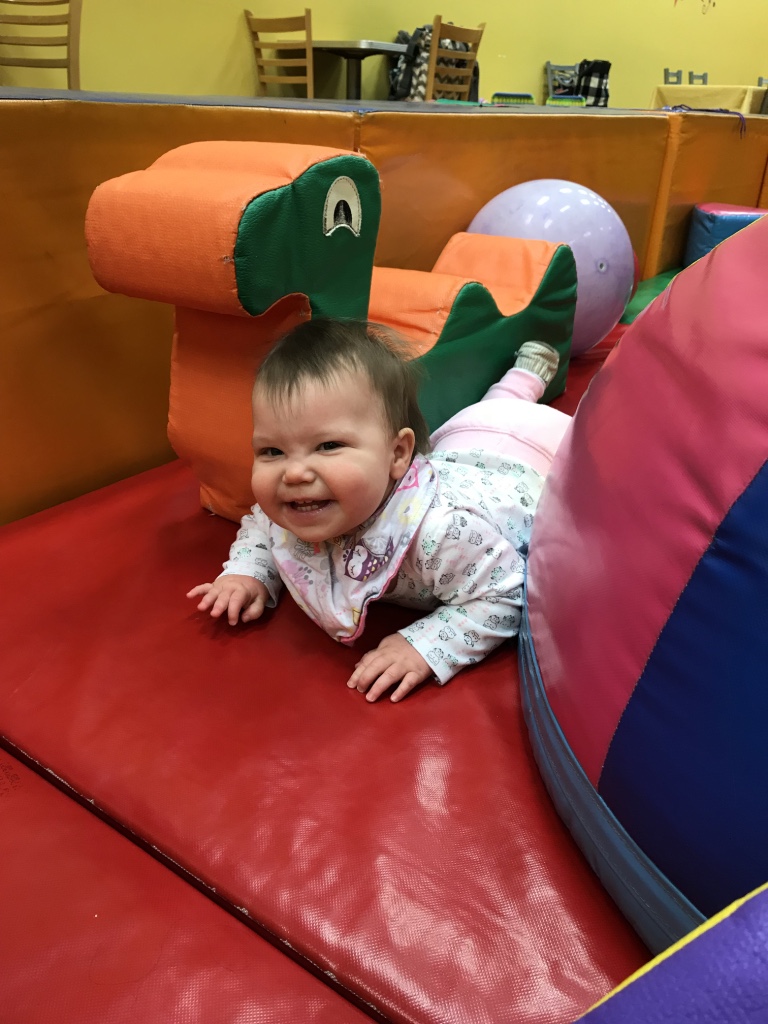 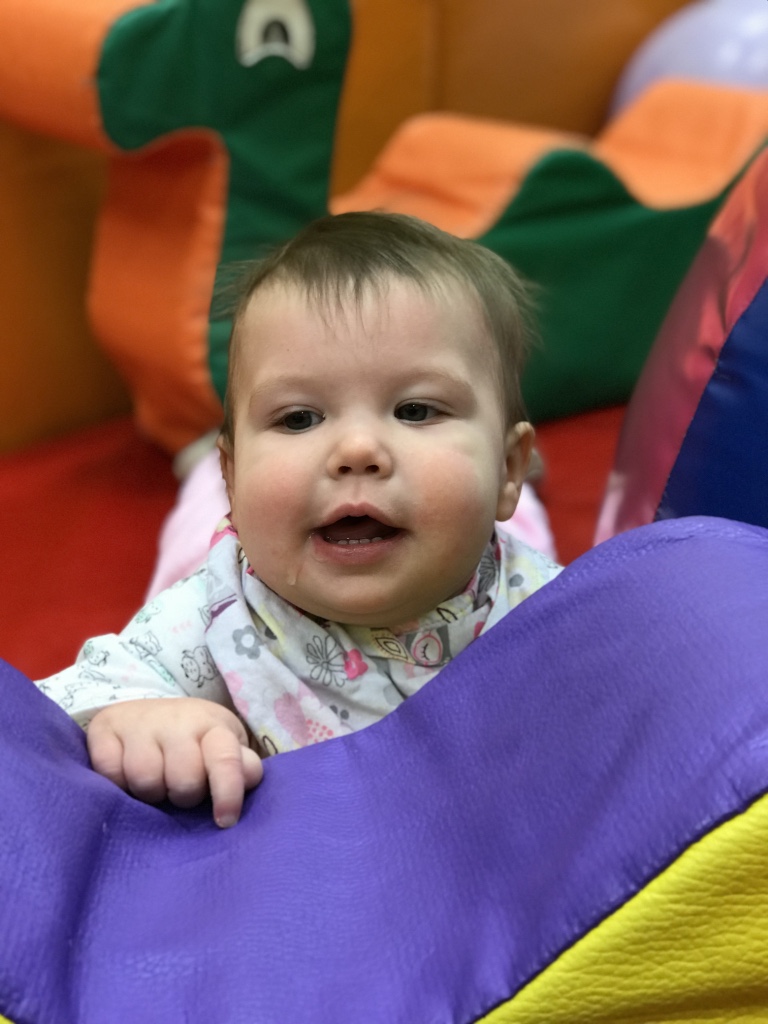 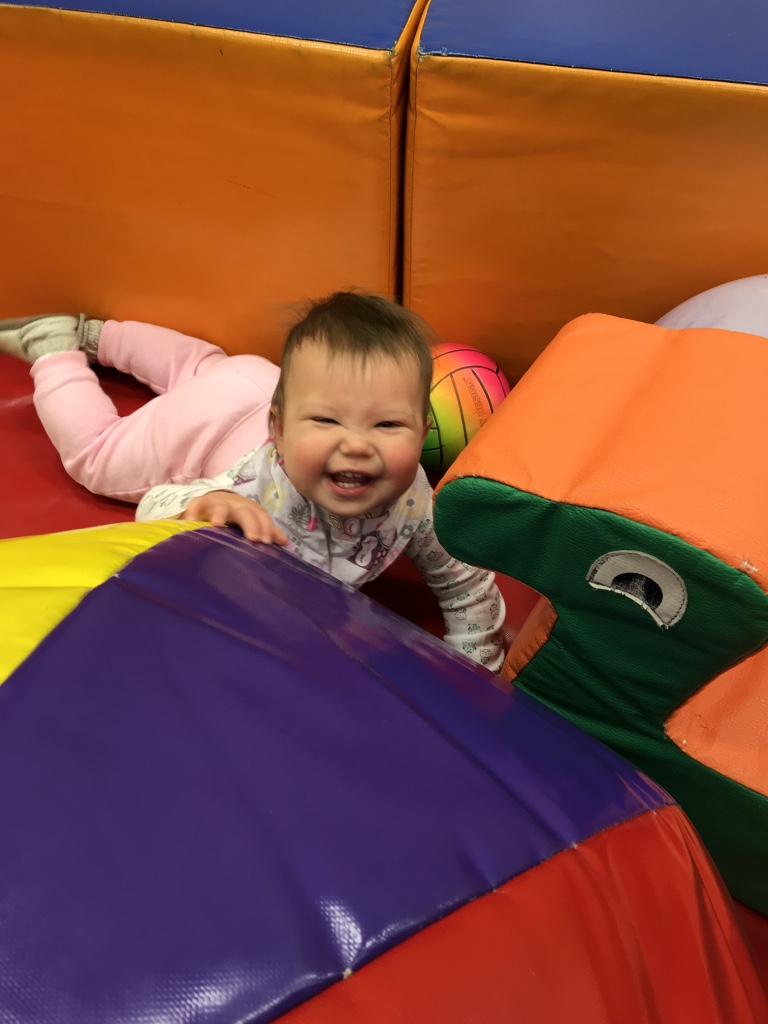 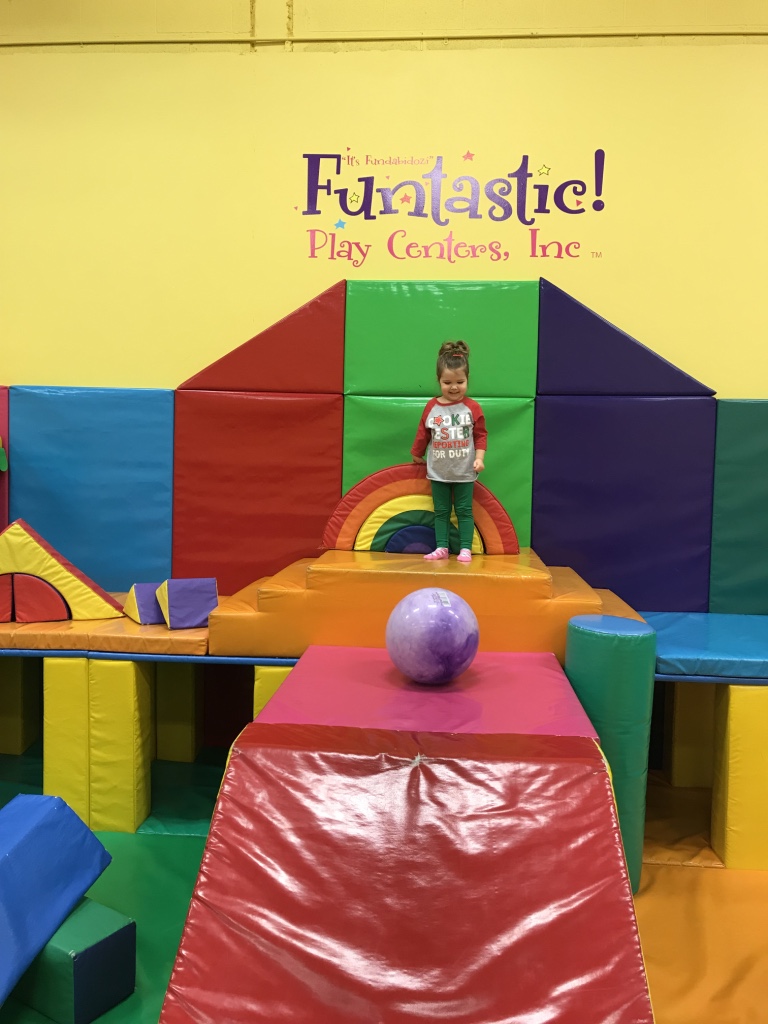 For a place that’s geared toward little kids, their slides are freakishly fast. Marie and I took turns climbing up with Amelia and Lucy. Amelia is younger, so she’d ride on our lap and then we’d hold Lucy’s hand. During one of my turns, Amelia got ahead of me in the tunnel and started to go down the slide herself. I dove through and grabbed her hand and pulled her back up. It was a pretty awesome mom save. I think if Lucy would lay flat on her back and go down that way she could handle it, but she’s not interested in trying it yet. 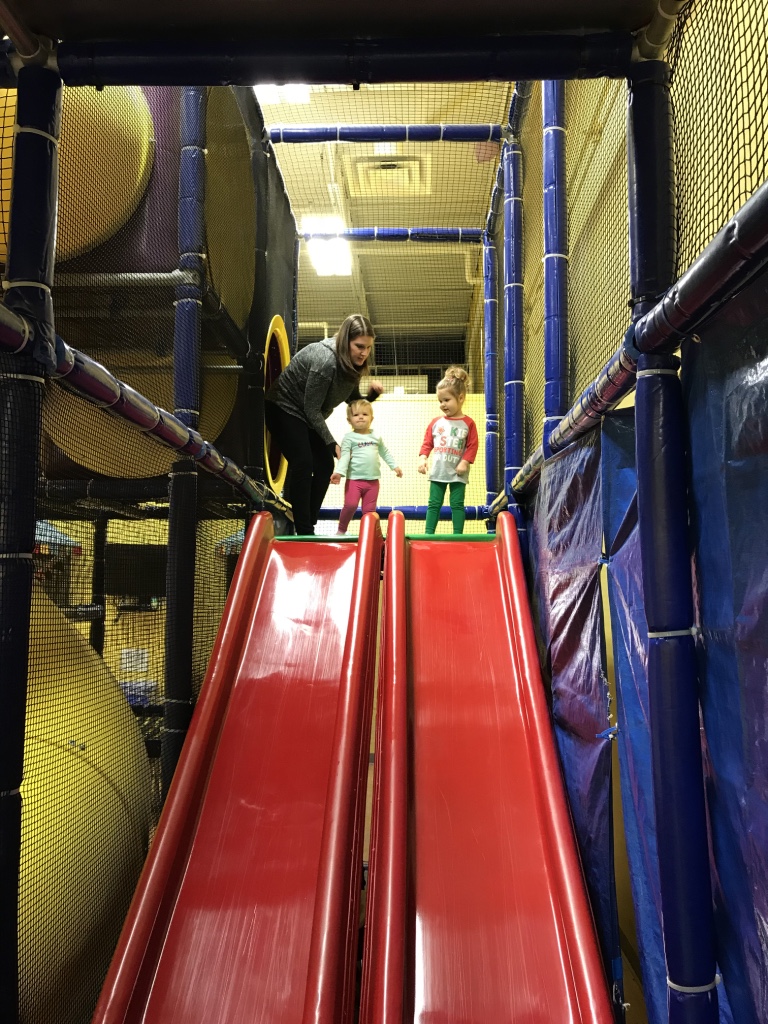 When you’re the second child, you get put in the random high chair without a protective cover or a tray. 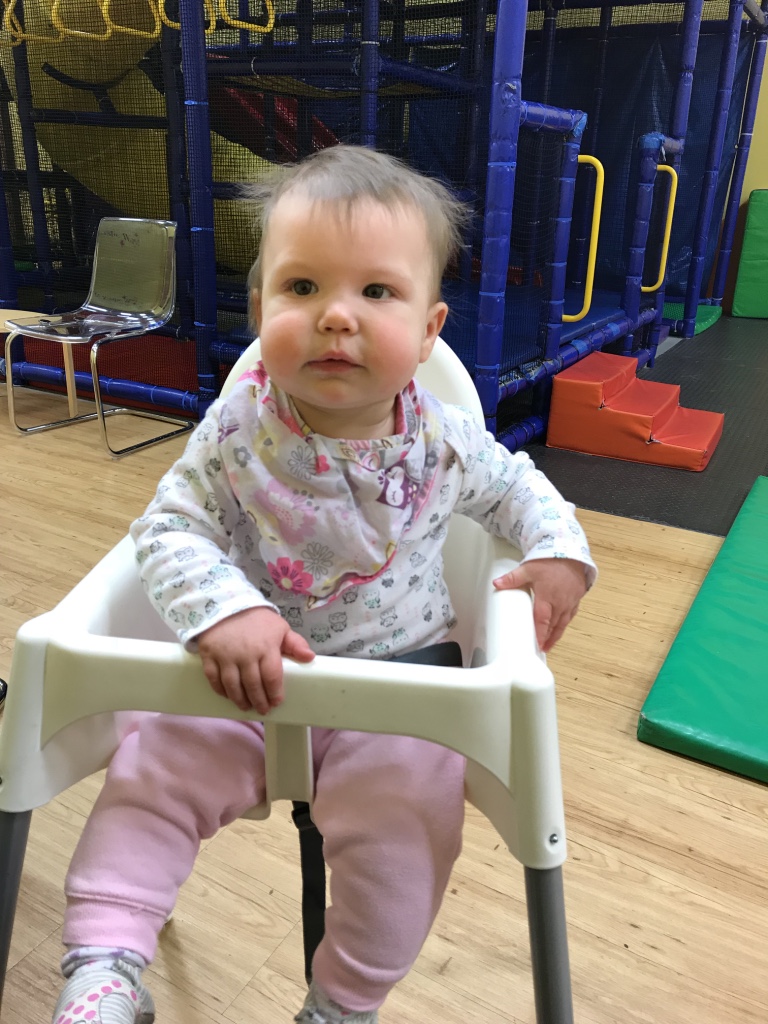 Monday night I pulled out all of my Christmas wrapping supplies to assess what I needed to buy (NOTHING!), and what I wanted to use. It took me all of five seconds to realize that gift wrapping was not going to happen while the girls were awake. Do you see those gift bags on the floor in the basket? Lucy had filled them with random things from the basement and then put them together in the bucket. Adorable, but not productive! 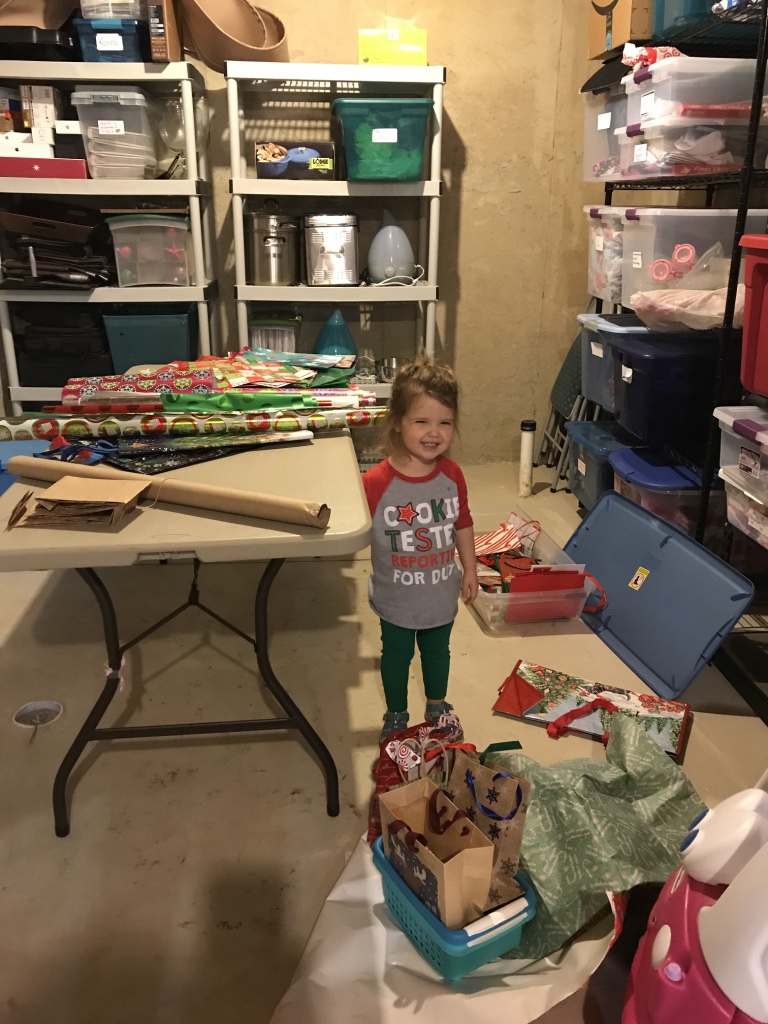 Snort is really enjoying the little doggie door area on the new tower of power. It’s like a little crumb cave! 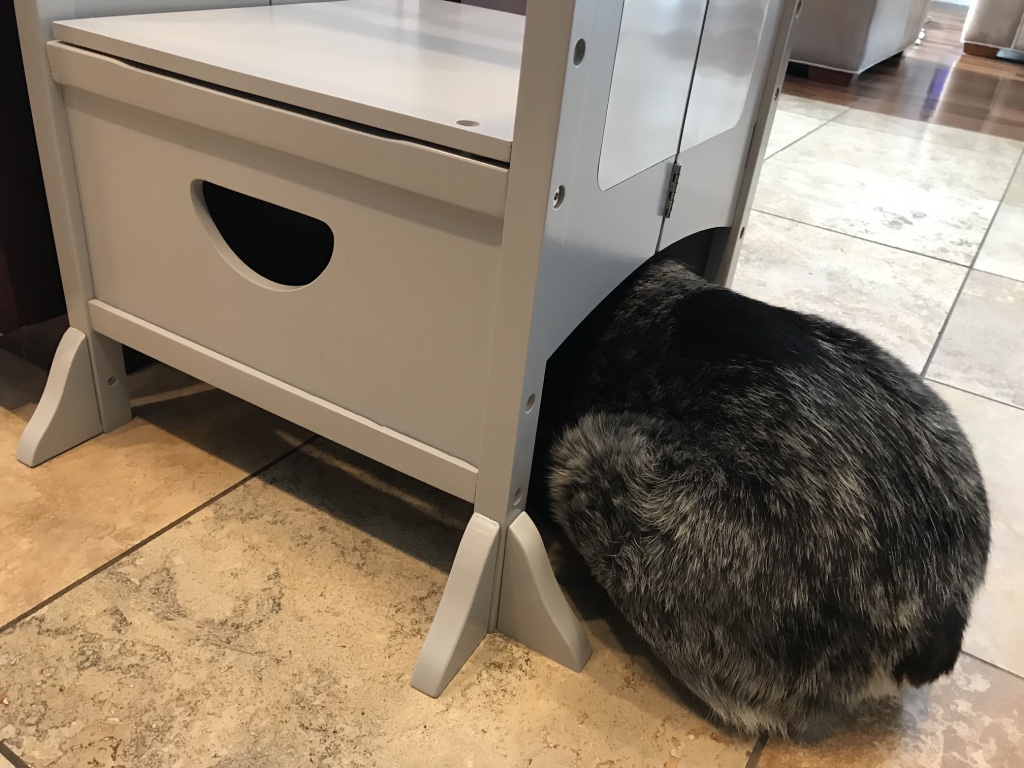 Lucy was reading a book to Nemo. 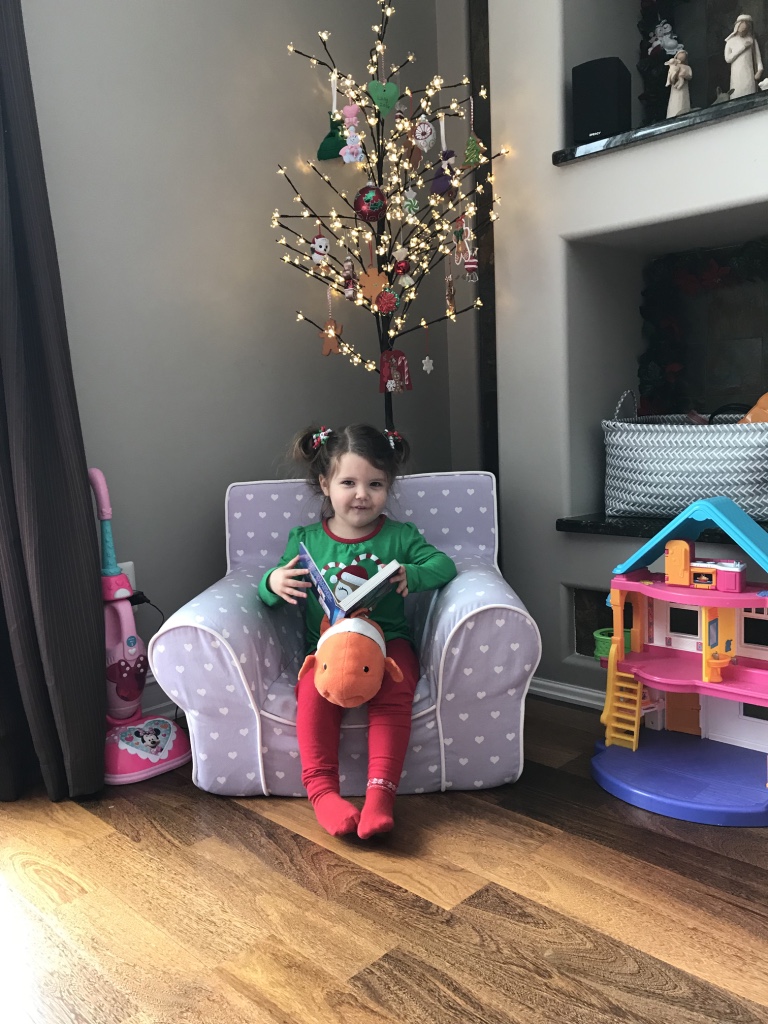 This picture is a little blurry, but I had to document that they were actually playing together! 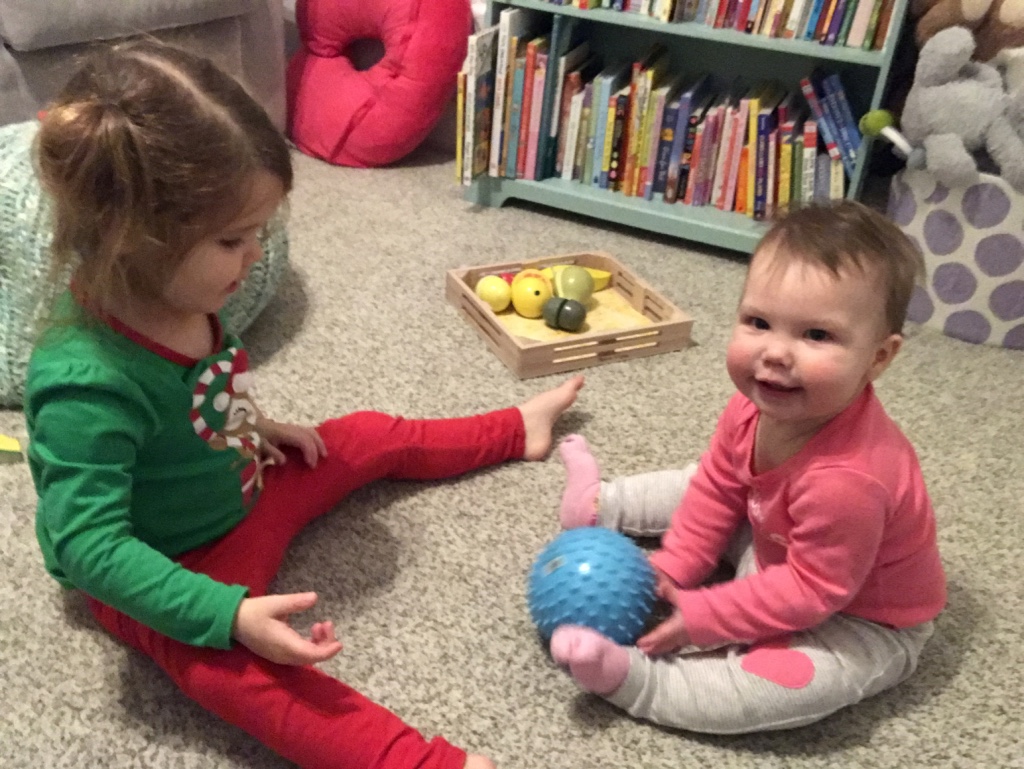 I noticed this little footprint as we were walking up from the basement the other day. I guess I need to be a little more diligent about cleaning the stairs! 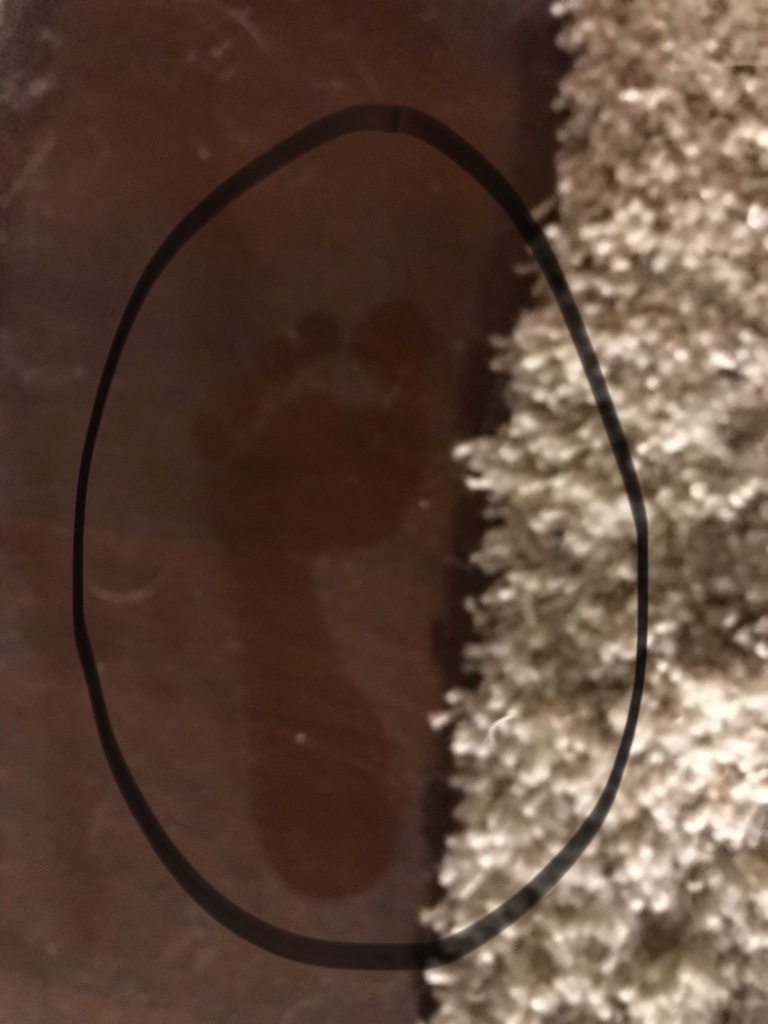 Now that Emily is consistently napping, I’ve been trying to get a few workouts in during the day while Lucy plays in the basement. Sydney things my mat should be for lounging instead of crunches. 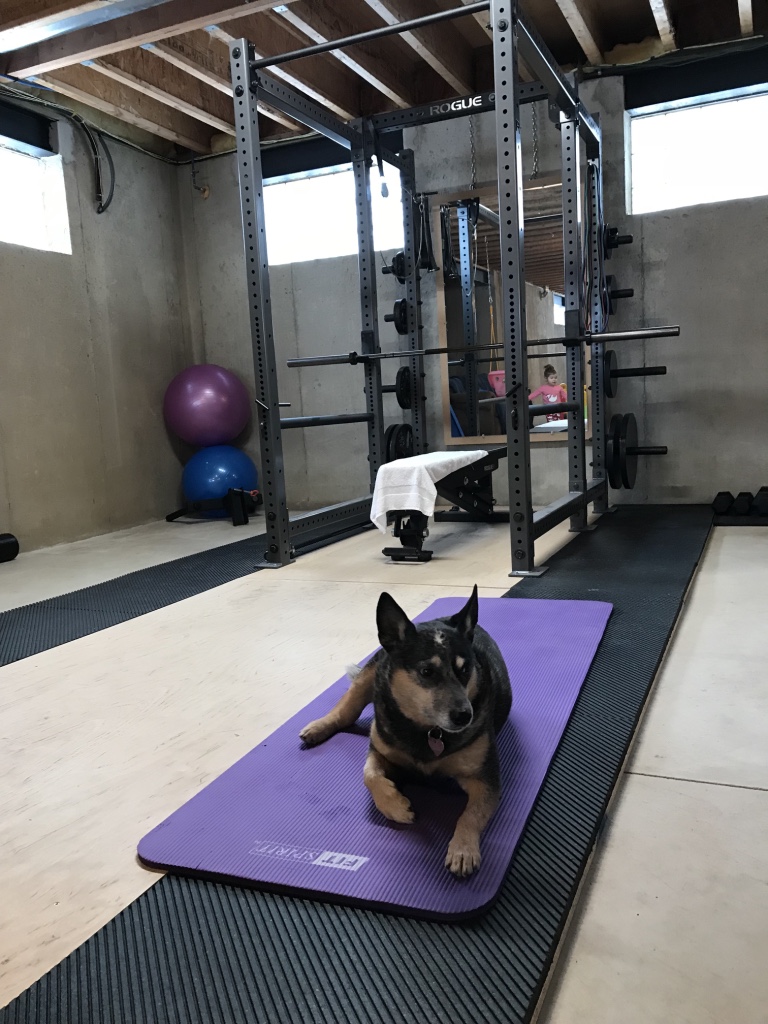 You wouldn’t know it from this picture, but Lucy crawled up onto my lap to snuggle after finishing a pretty epic tantrum. We had been home all day because of the snow, and I think both of us had had enough. I love the look on Em’s face. 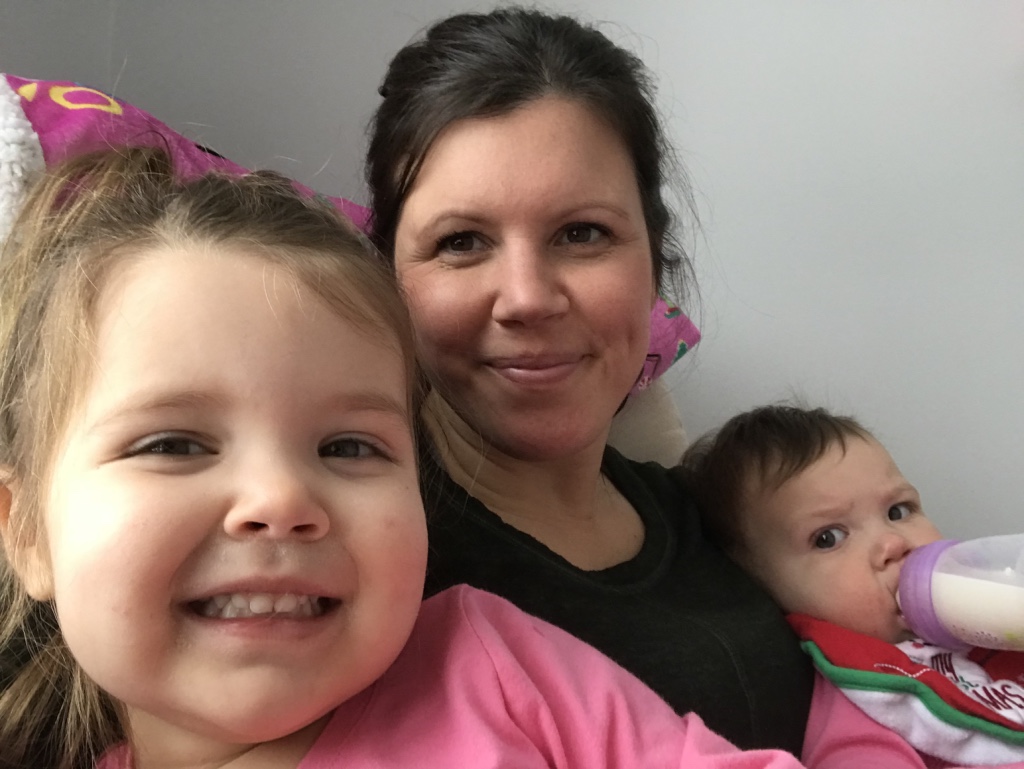 I took Lucy out to play in the snow during Emily’s afternoon nap. At first, I wasn’t sure how I’d set the monitor down because everything was covered in snow. Sometimes my brilliance surprises me.  😉 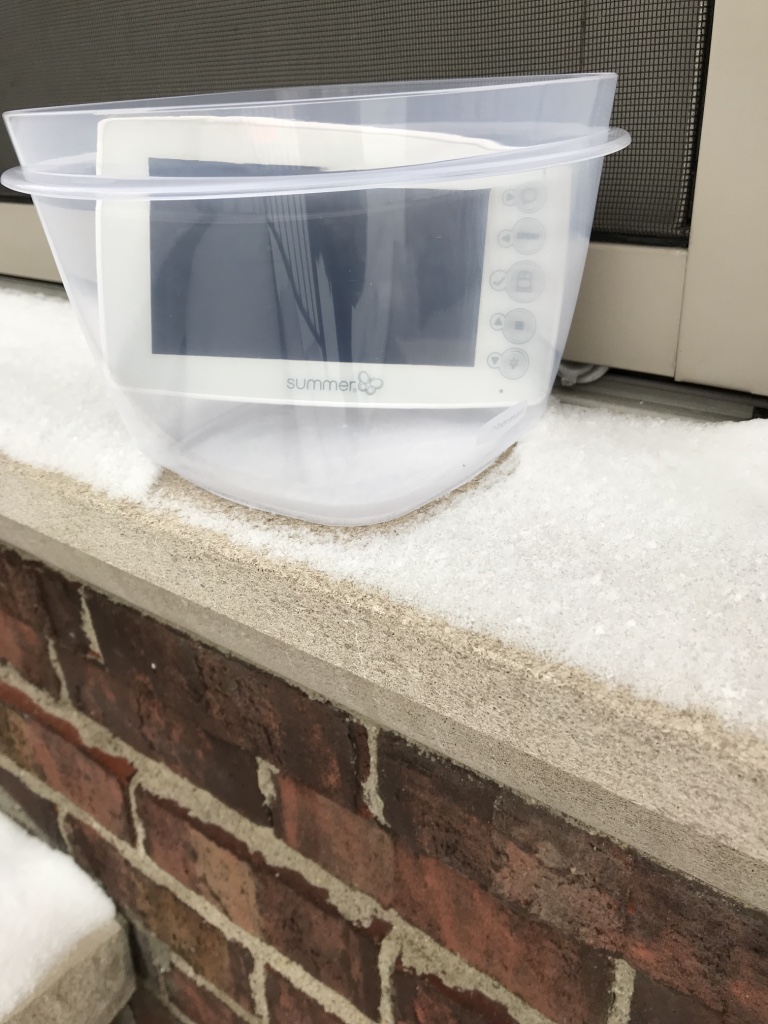 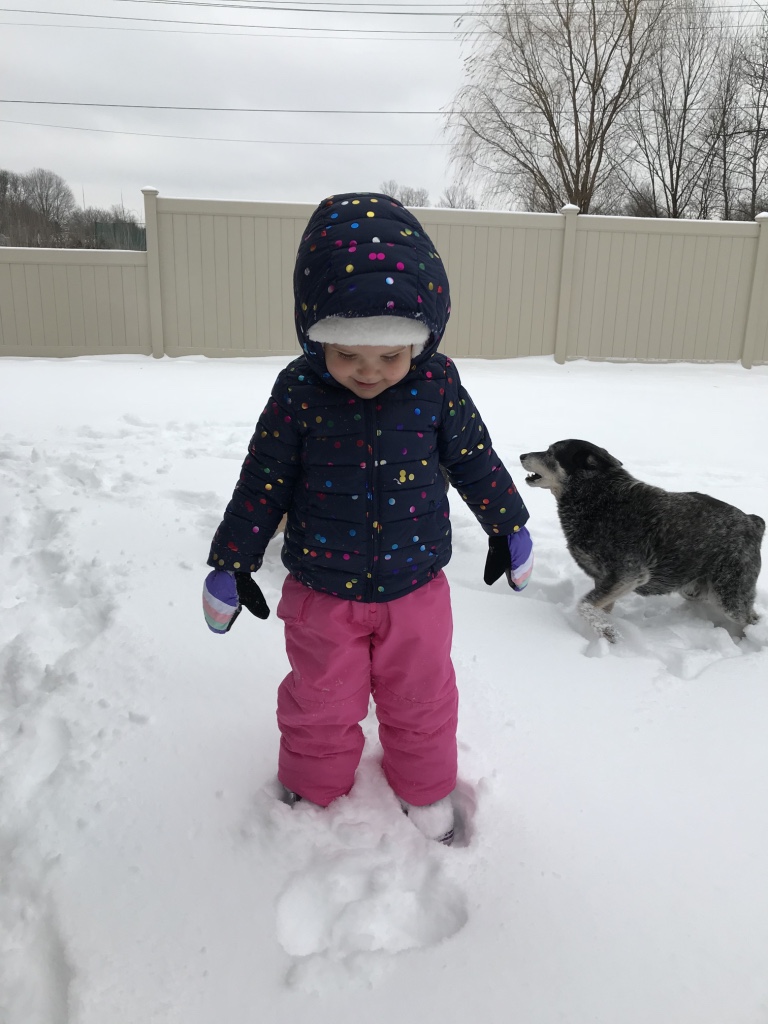 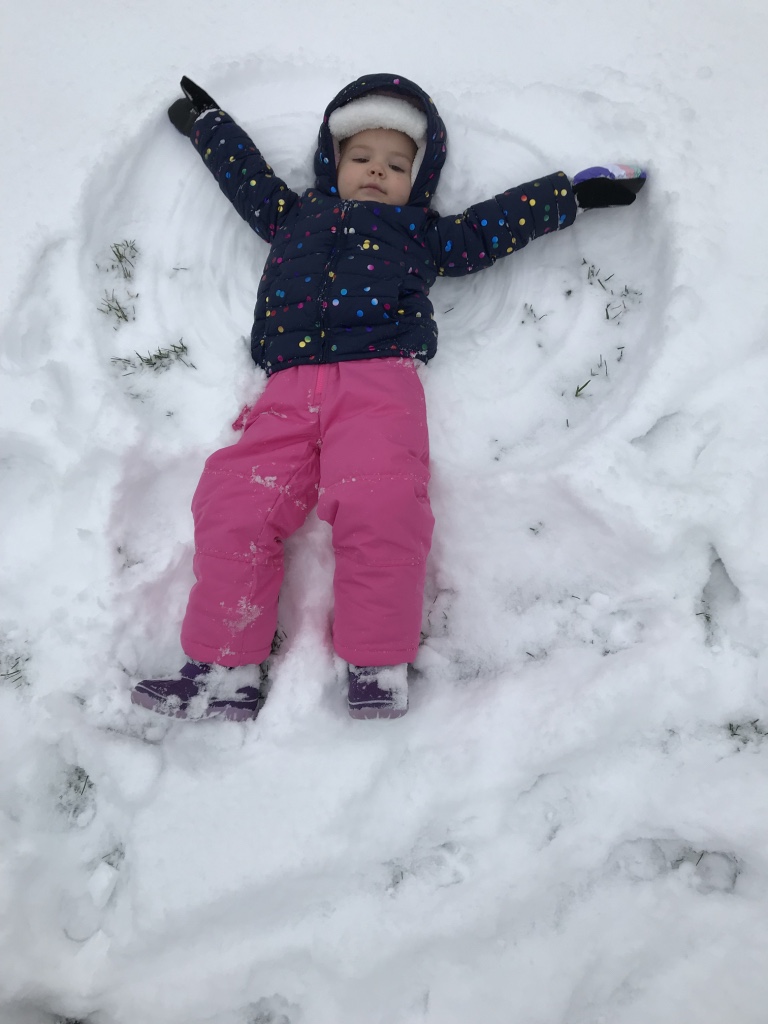 Emily slept in this position for quite some time the other night! 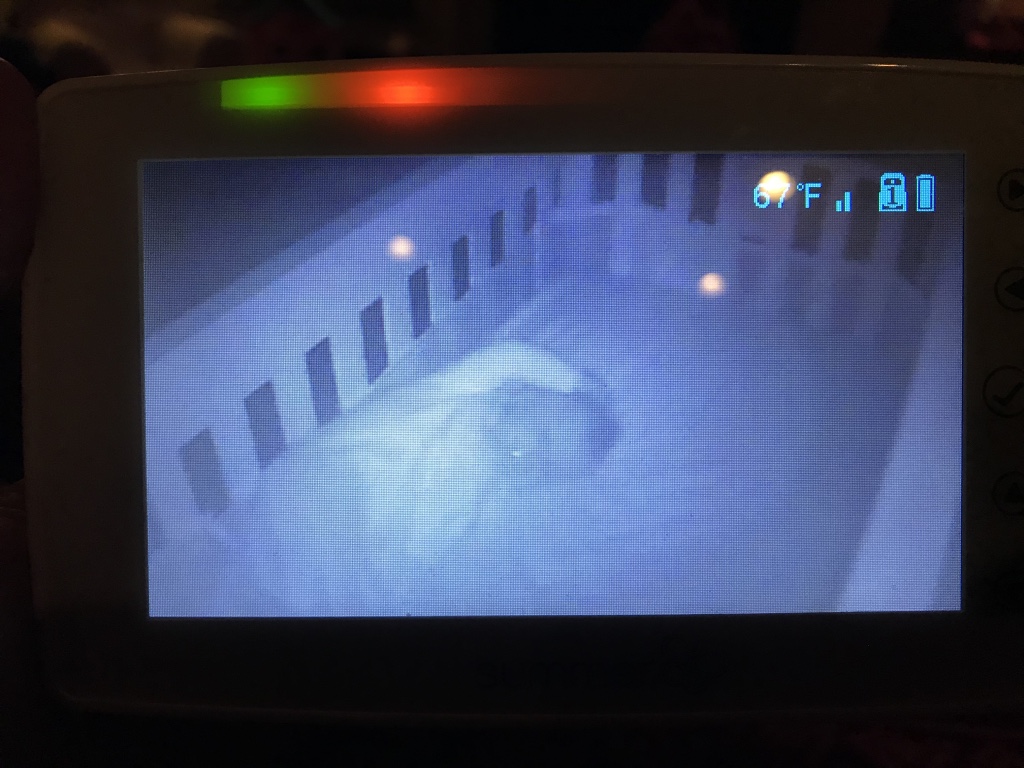 And finally . . . Matty isn’t the only one outside working hard tonight. I just got these pictures from Carla. Look how cute they all are! 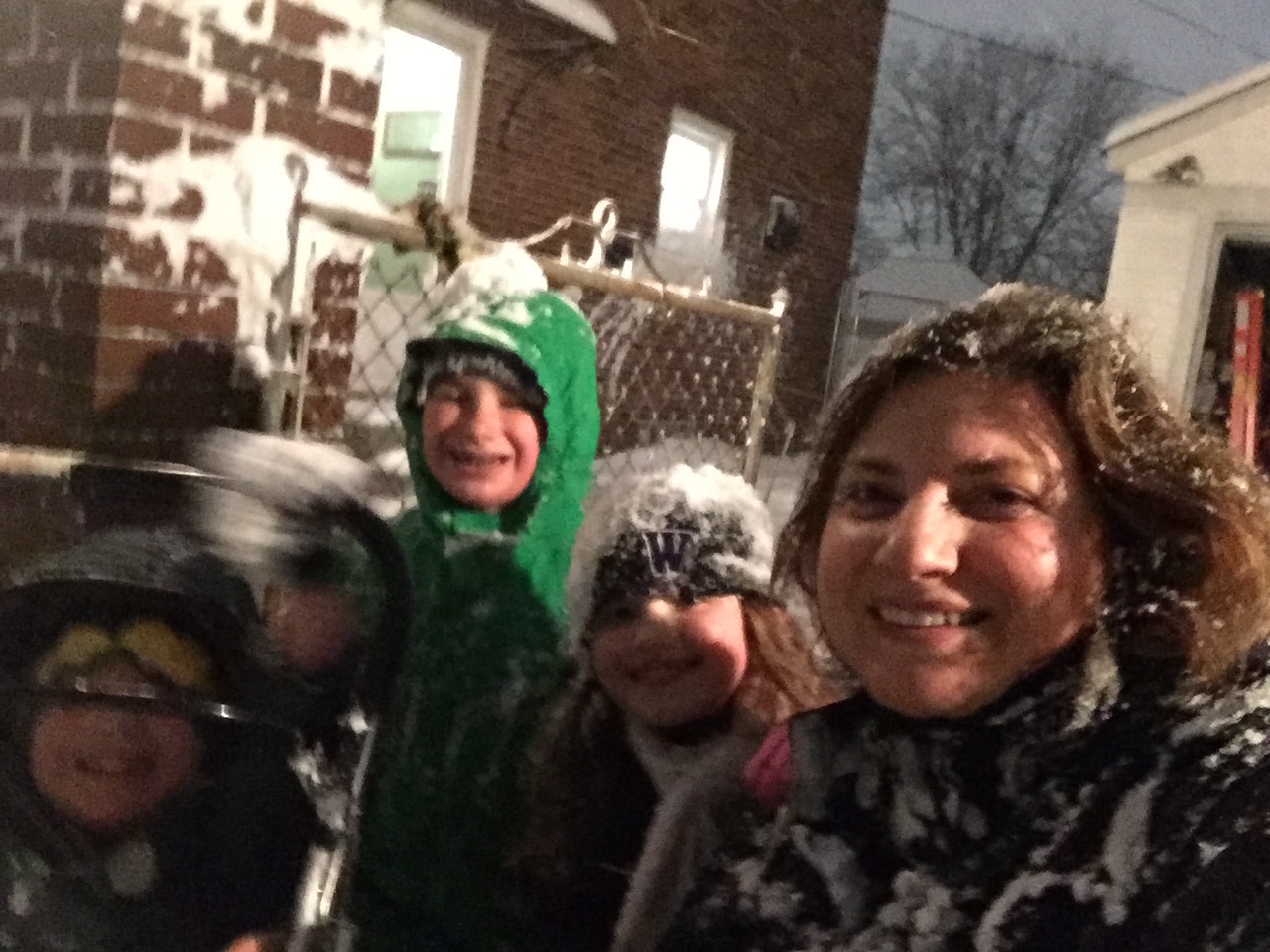 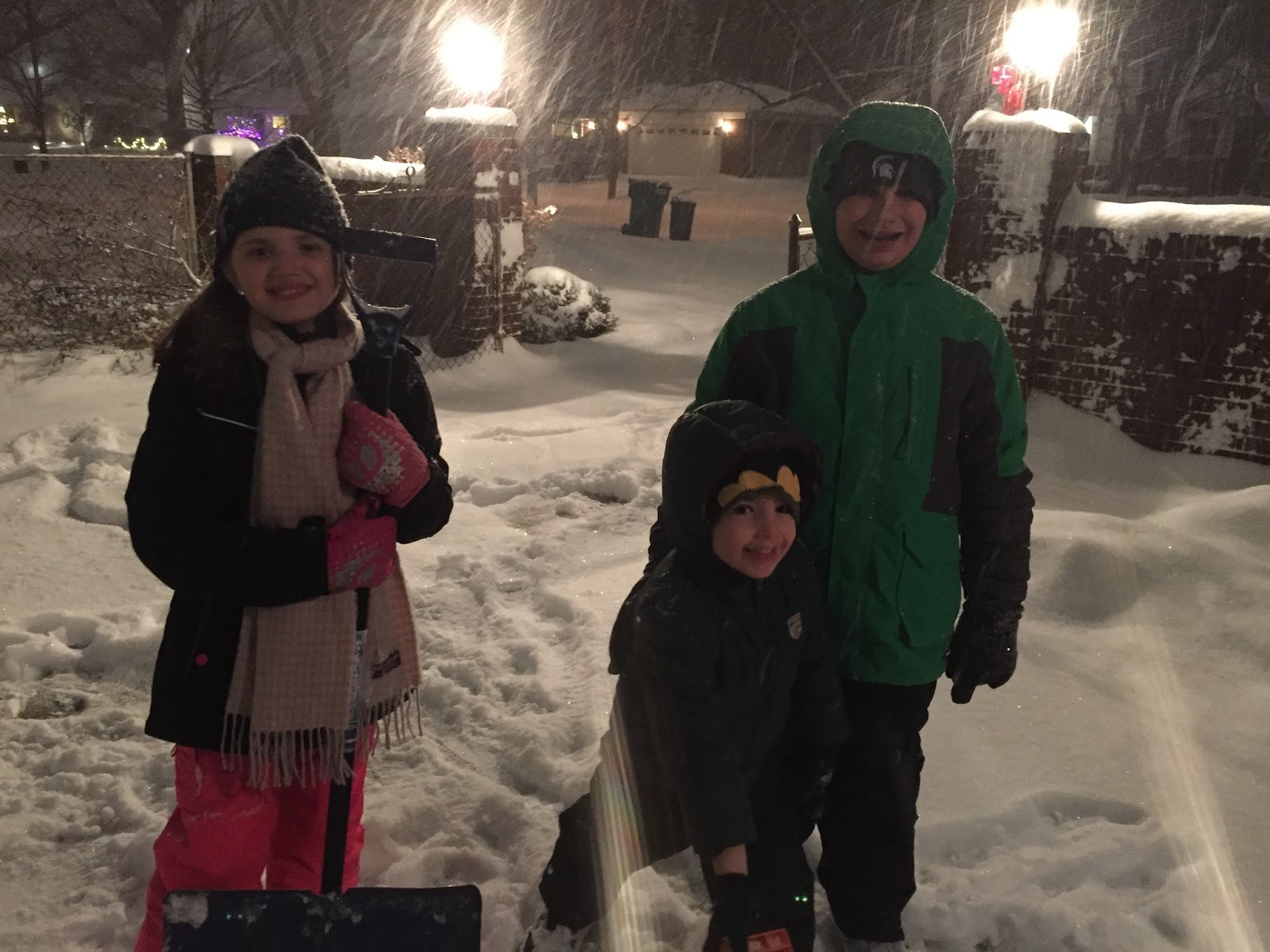 Alrighty, that’s all for now. We don’t have any official plans for the weekend, which is nice. I’d like to drive around and look at lights, and I haven’t gotten my annual Peppermint Hot Chocolate from Starbucks yet. It seems like we could definitely combine those two into a nice little evening trip!
Stay warm!
XOXO