We had a very productive weekend of Christmas decorating! Emily spent the day and night at my parents’ house on Saturday, which made decorating about a thousand times easier than it would have been with a baby crawling around. But let’s not get ahead of ourselves. I’m gonna start things off strong with the amazing dinner I made for my family on Thursday.
Not! So Chicken Paprikash is one of our favorite meals . . . when made by Matt’s mom! You may recall that last Wednesday was Rita’s birthday, and she said she’d rather make US dinner than have us take her out. Um, ok! Rita came over with all the fixings on Wednesday, but ended up not feeling well and went home instead. I didn’t want the food to go to waste, so I decided to give it a try on Thursday. I guess it was a bit overzealous of me to take on such a big meal all by myself . . . while also entertaining two children!
The prep work actually went smoother than expected, and I got everything into the pan to simmer and was feeling like a superwife . . . until it came time to uncover everything and make the gravy. Turns out I had simmered the meal on too high of heat, and the chicken was burned on the bottom. 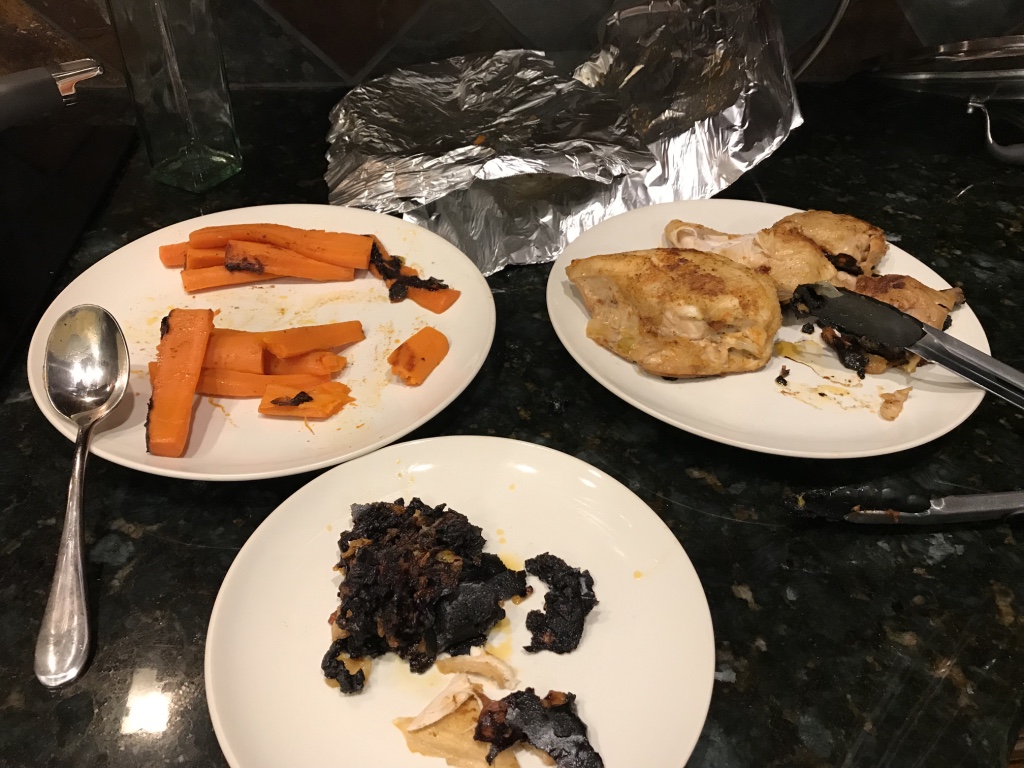 I decided to go ahead an try to make the gravy anyways. Bad idea. I believe when Matty tried it he said, “How can it taste THAT bad?” #oops #mamatried #neveragain 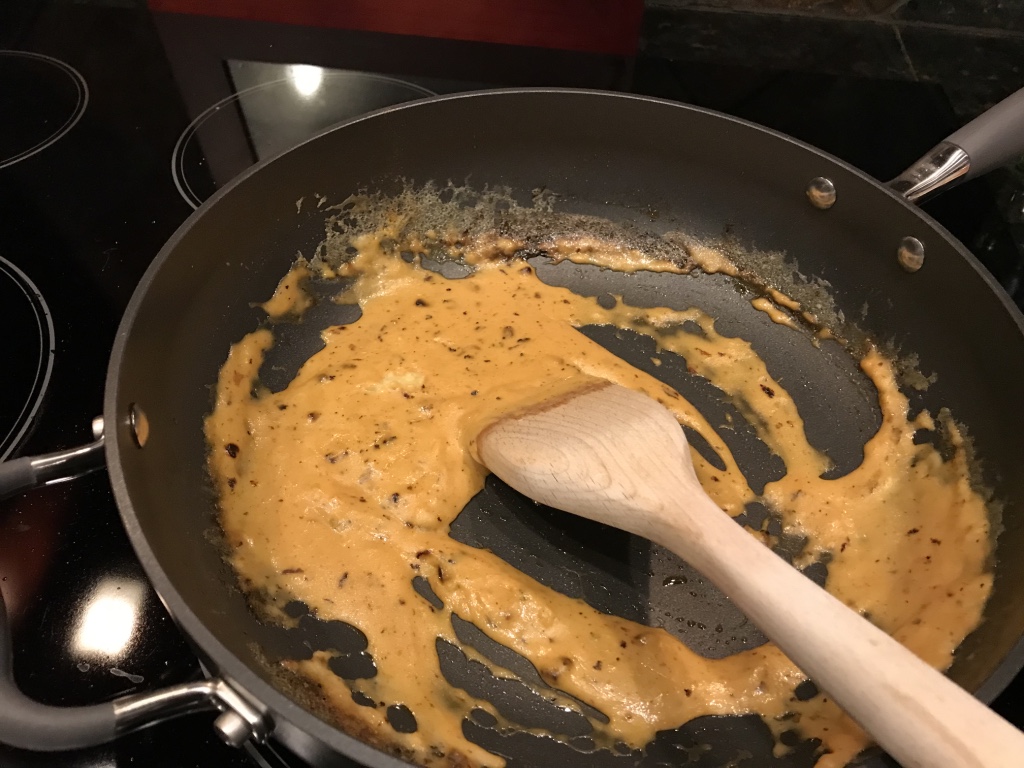 I took the girls to Sky Zone for Toddler Time with my friend Leslie and her three kiddos . . . and we had the place to ourselves! It’s usually pretty crowded, so this was a treat. You may recall from previous posts that Lucy has been going through a difficult phase lately, so I had really low expectations about this play date. I basically told myself I was taking her to Sky Zone so she’d have a different location to throw her tantrums. Well, she surprised the pants off of me by doing a GREAT job! Not only did she leave my side, she spoke to Leslie, initiated play with Catherine, and even held her hand as they ran around! 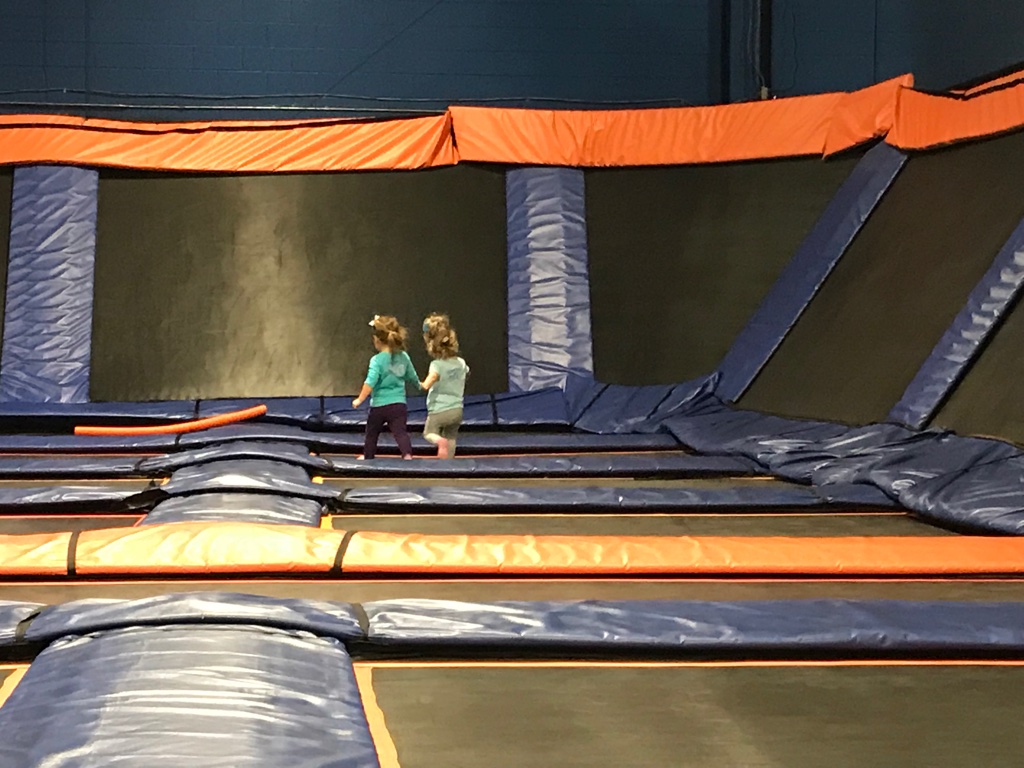 They pretended to have a parade and then sat down for “story time.” You guys, I seriously thought I was going to cry tears of thankfulness and relief. After the previous ten days we’d had, along with a challenging conversation with Lu’s doctor, I was at the end of my rope. . . and then it’s like Lucy flipped a switch and my sweet girl was back! 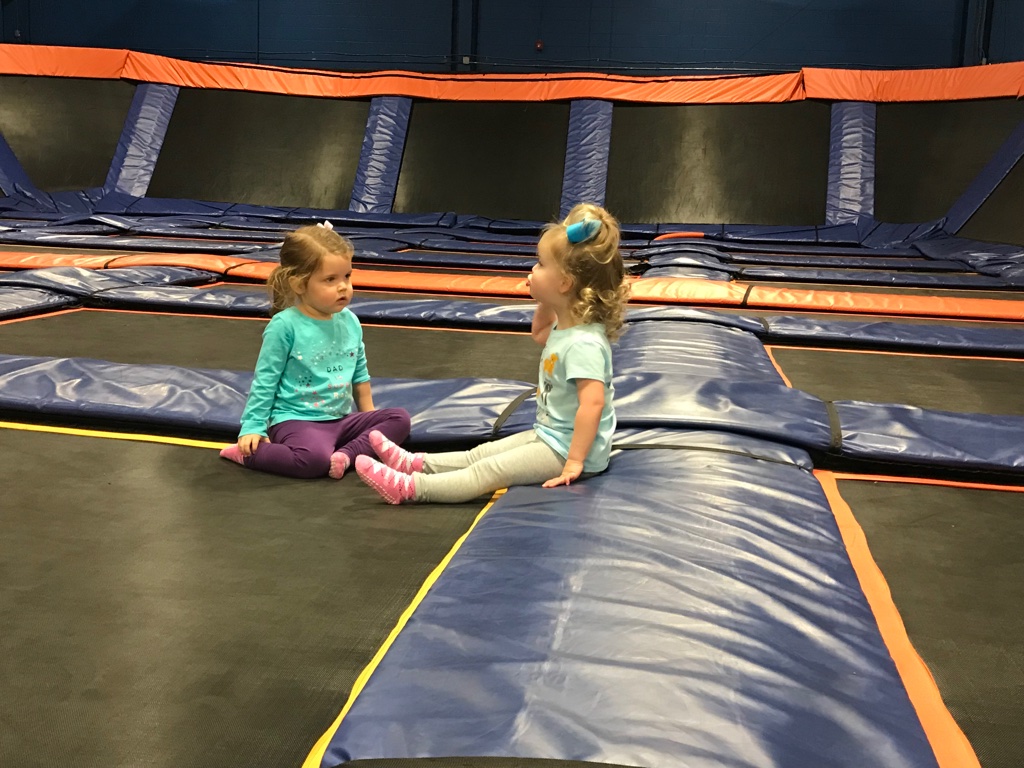 After jumping for about ten minutes, she was ready to stop for a snack! 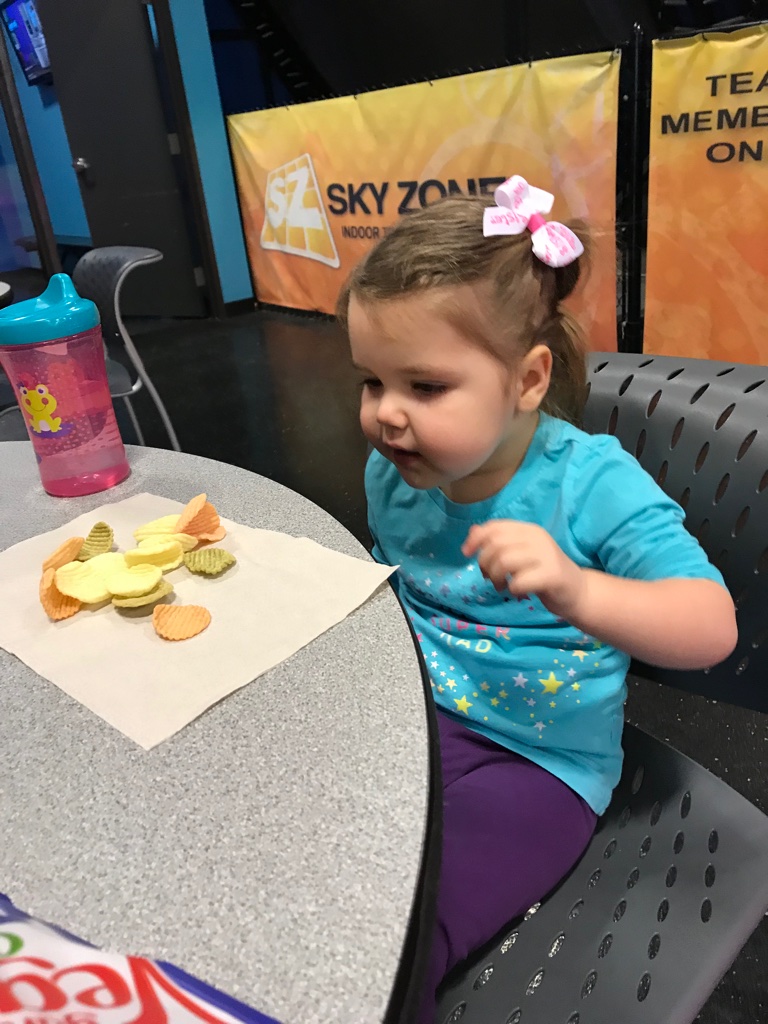 Since it wasn’t crowded, even the adorable babies got to play around! 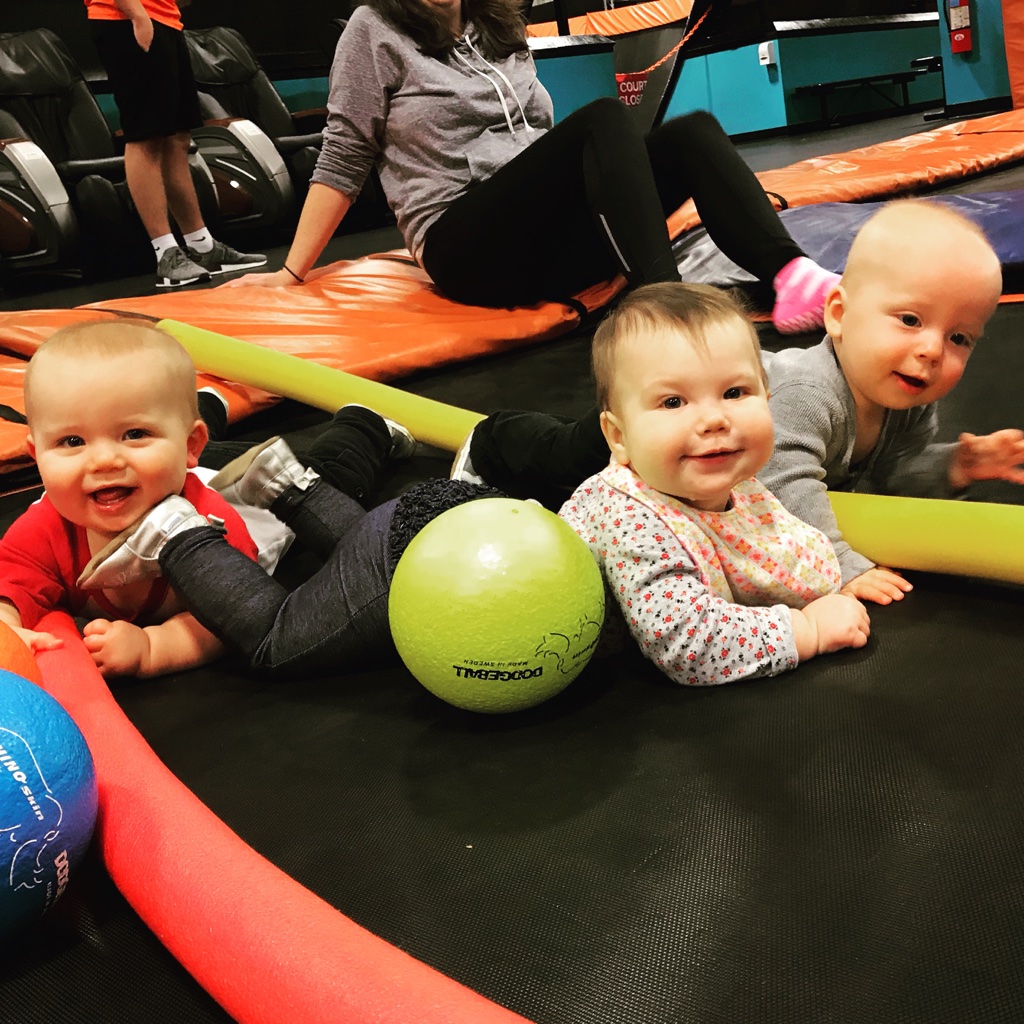 Emily had skipped her morning nap and passed out as soon as I put her in the car to drive home. 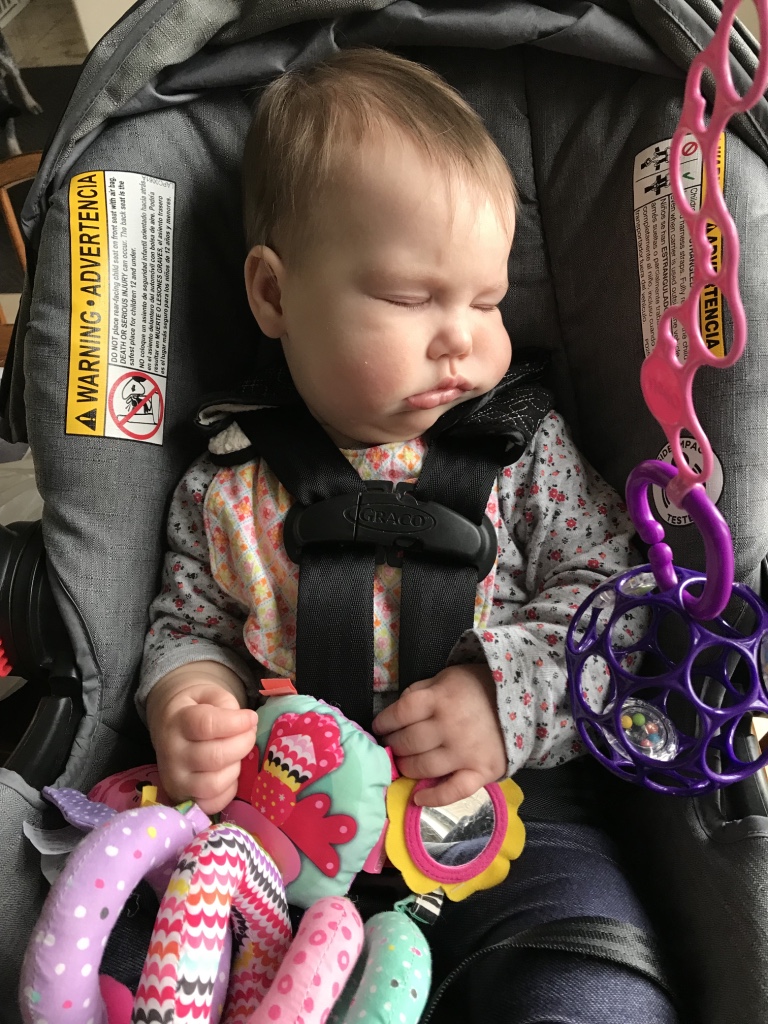 After nap/rest time I loaded the girls back up and we headed to Target. This was the first time I had Emily in the cart when Lucy was with me, and they did a great job! They were both too interested in the new Starbucks to look at the camera, though. 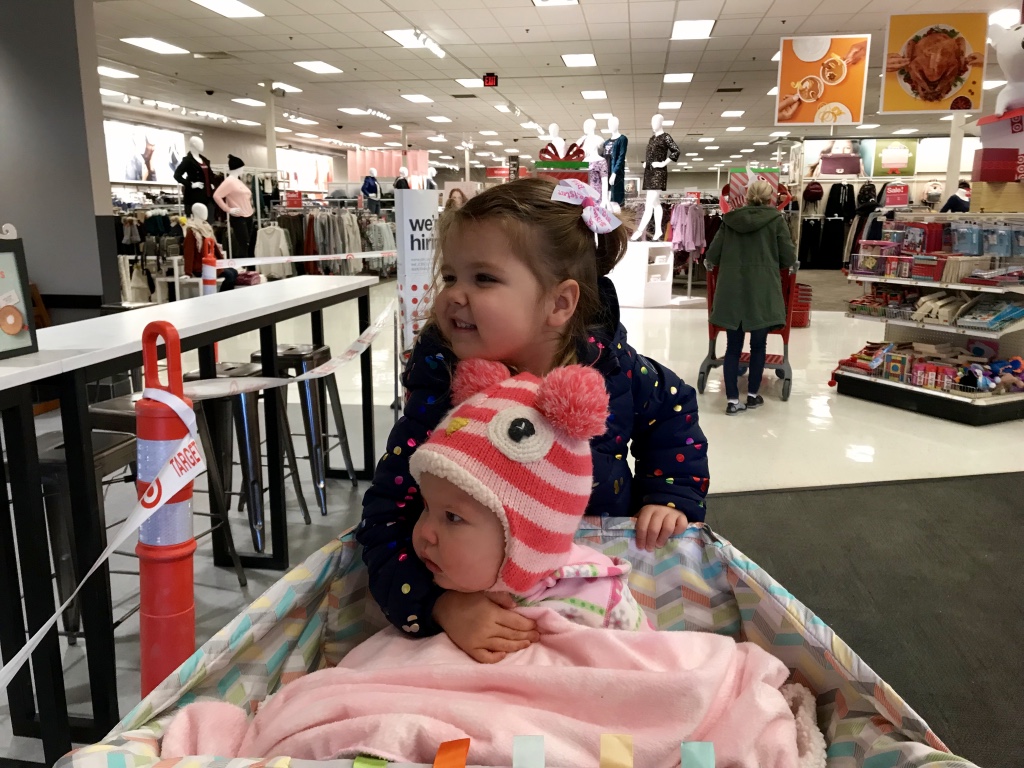 After putting Emily in the car and loading all of our Target purchases, I was standing behind my car holding Lucy’s hand and was about to go put her in the car when this gray car pulled right in next to me (even though there were lots of other available spots). The lady opened her door (which tapped my car, by the way), got out, and walked away without even looking at me. The perspective might be a bit off, but there was no way I could open the door to get Lucy in, so I had to take Emily out of the car, and crawl in from that side with Lucy to strap her in, and then put Emily back in.  #thanksalotlady
Oh, and while I’m venting about parking lots, you know what I don’t get? Those signs that say the close spots are reserved for mothers with newborns. Newborns are a piece of cake to shop with! You know what’s hard to handle in the parking lot? . . . a fussy toddler who wants to jump around instead of walk, and makes her arms go limp like noodles when you try to pick her up. The signs in the close spots should say, “This spot reserved for moms with fussy toddlers who have to run in to the store really quick because it’s unavoidable. You can do it!” I think they’d have to make the signs bigger, though.  😉 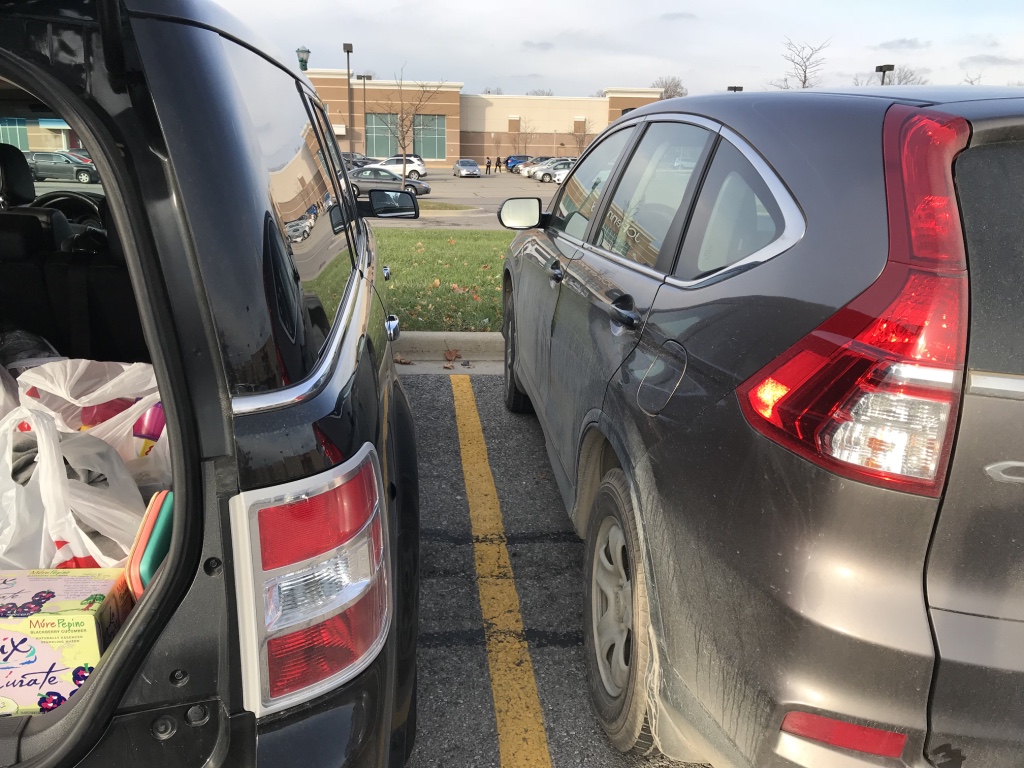 Apparently Matty and Lucy have a great time in the car. I’m assuming they were at a red light when this was taken. Also, Lucy’s newest thing is taking off her socks and shoes in the car. It’s always something! 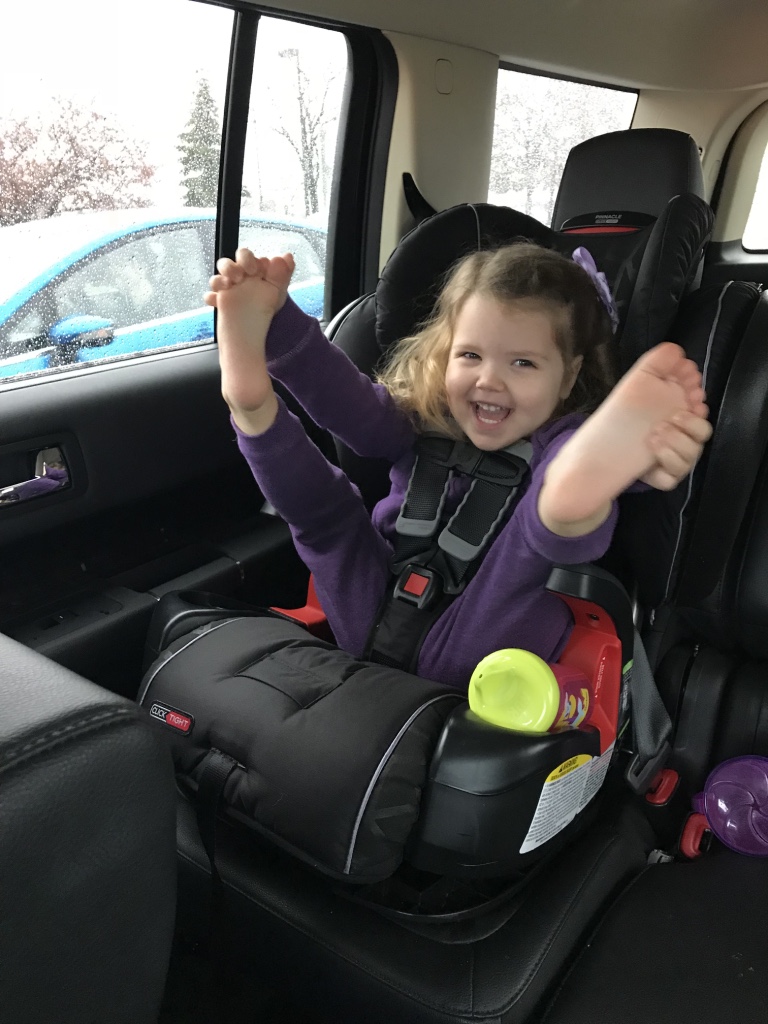 Decorating our silly little tree. I’ve said it before and I’ll say it again . . . as soon as our naughty dogs pass on to the dingo farm in the sky, we are getting the biggest, most beautiful artificial tree you’ve ever seen! 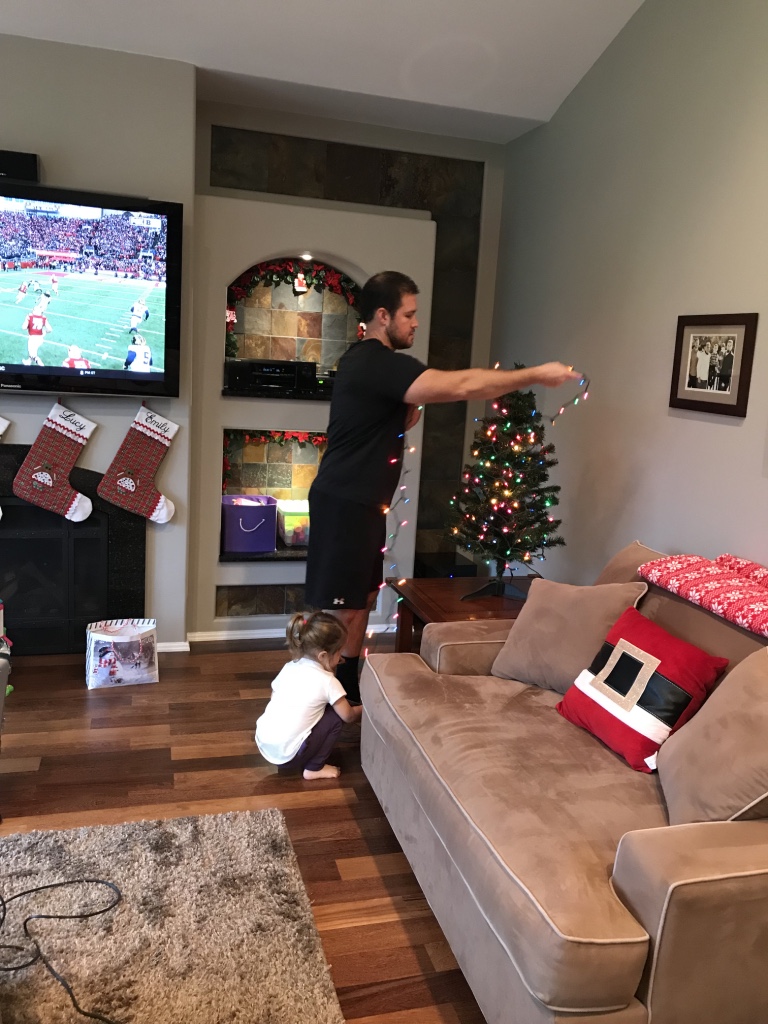 I picked up our annual personalized ornaments a few weeks ago, and they are so cute! 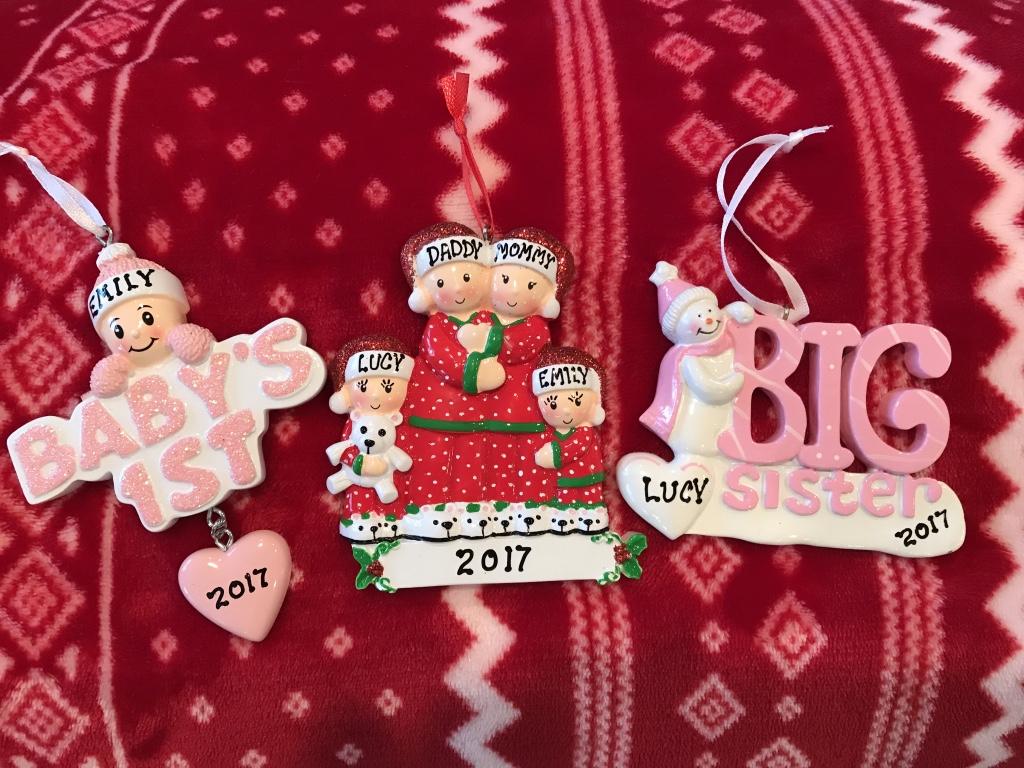 After a long day of decorating on Saturday, we took Lucy out for dinner. She wasn’t cooperating for pictures, but she did a great job eating lots of bread and a little bit of her noodles and sauce. Also, they had grilled salmon on the kiddie menu. I would like to know the exact number of kids who have ordered that! #zero 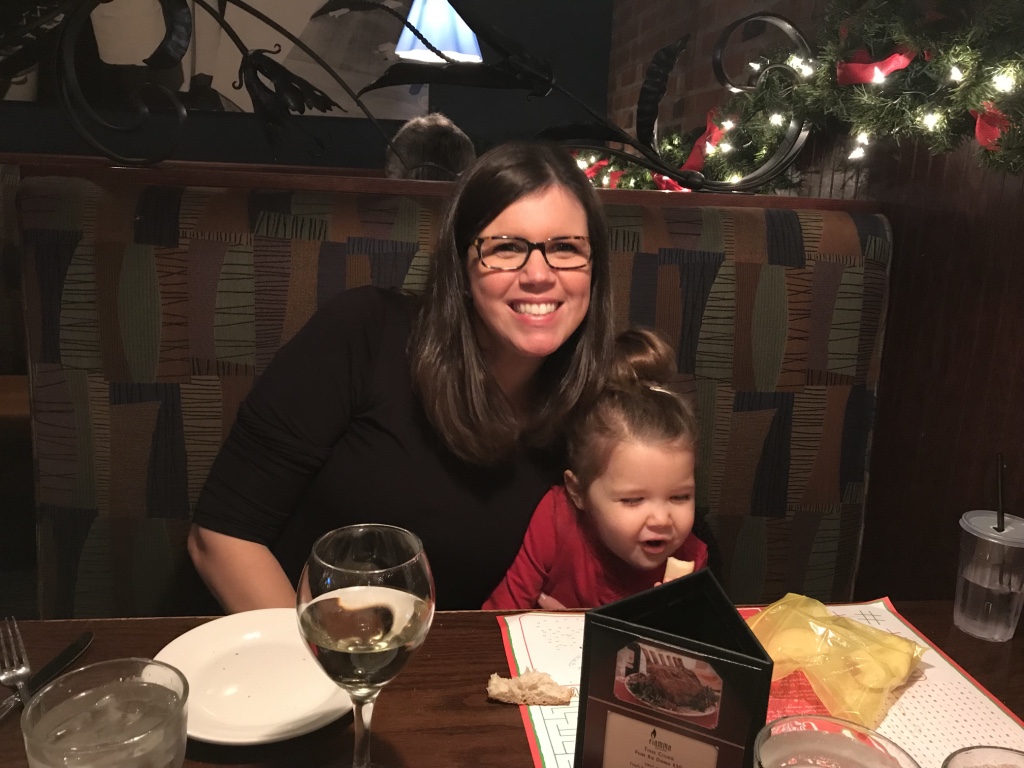 Still not cooperating for pictures, but Lucy enjoyed a little ice cream for a treat after dinner. 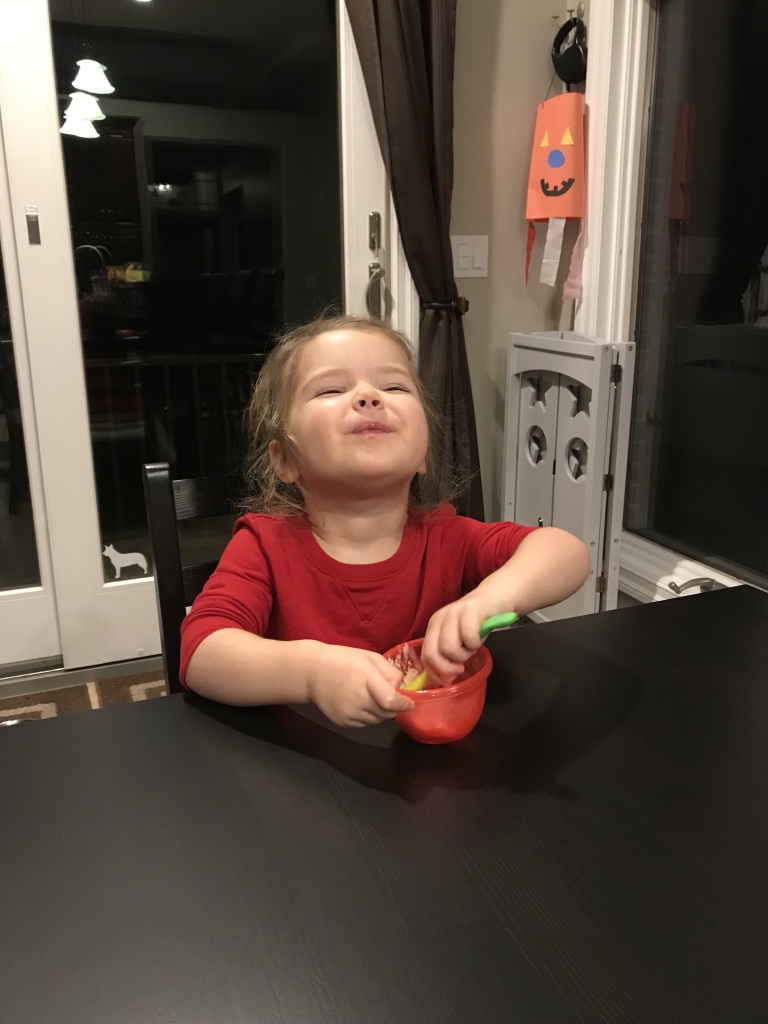 It was so easy to put one child to bed . . .and then collapse on the couch and enjoy the fruits of our decorating labor. 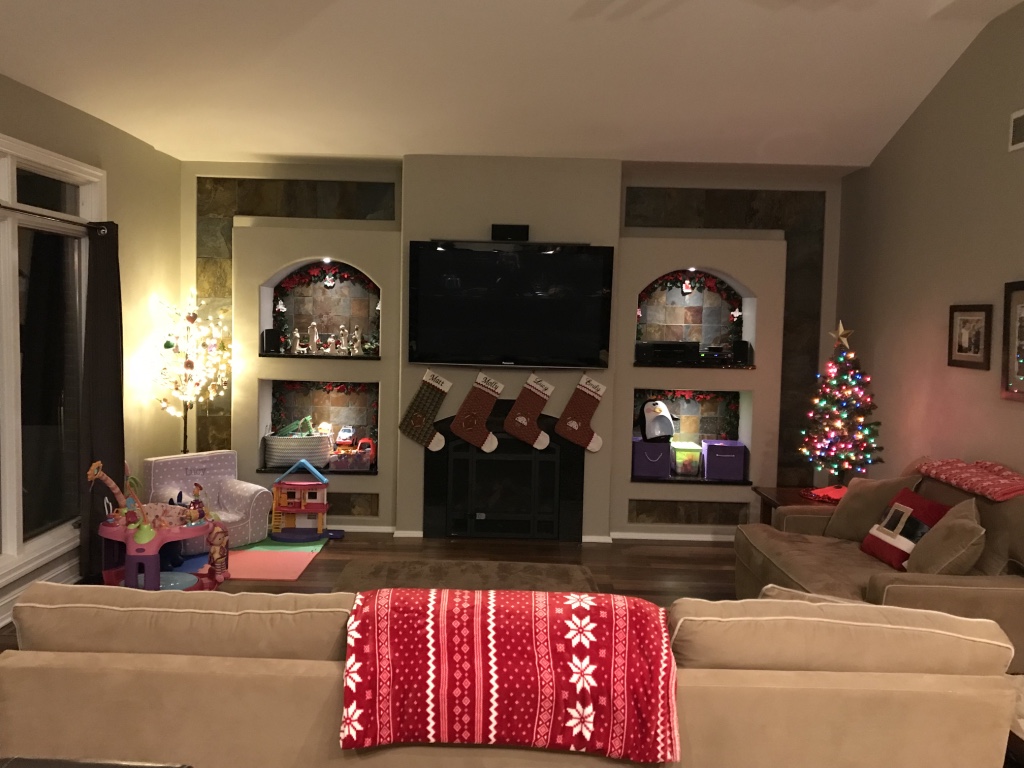 Lucy slept in on Sunday morning (thank you, Baby Jesus!) and then we ran some errands right away. She wore her pj’s and one of my big statement necklaces and enjoyed some Tim Bits in the cart. Being a two-year-old must be awesome! 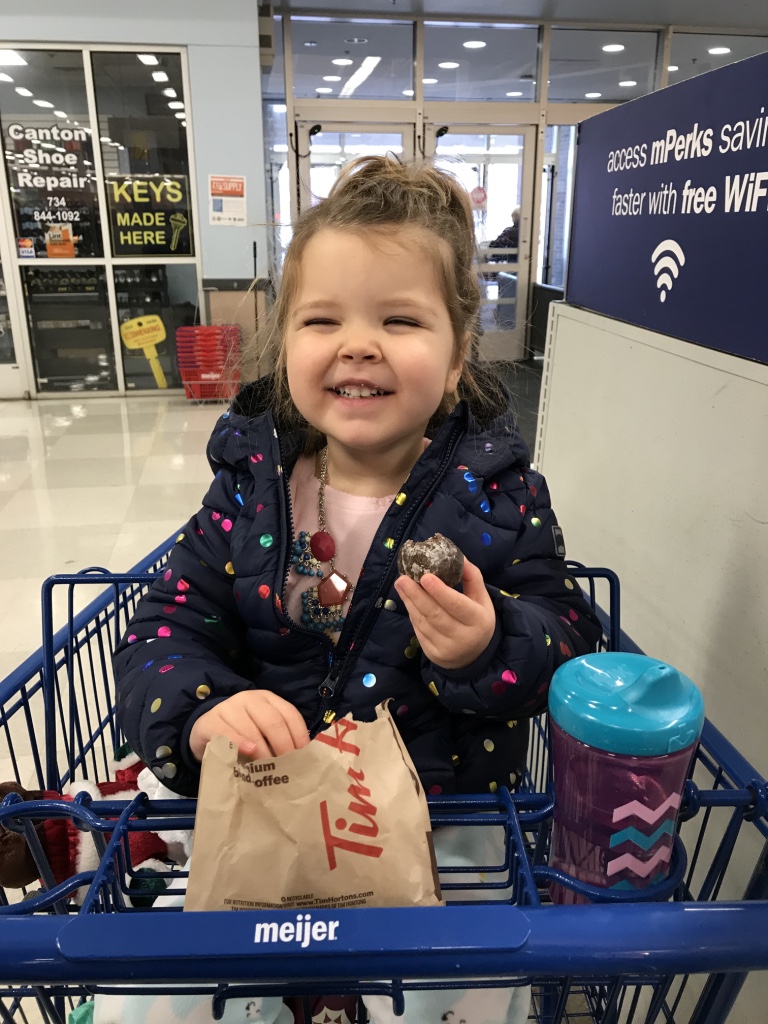 She had not one, not two, but THREE penny pony rides while Matty waited in line to buy our groceries. 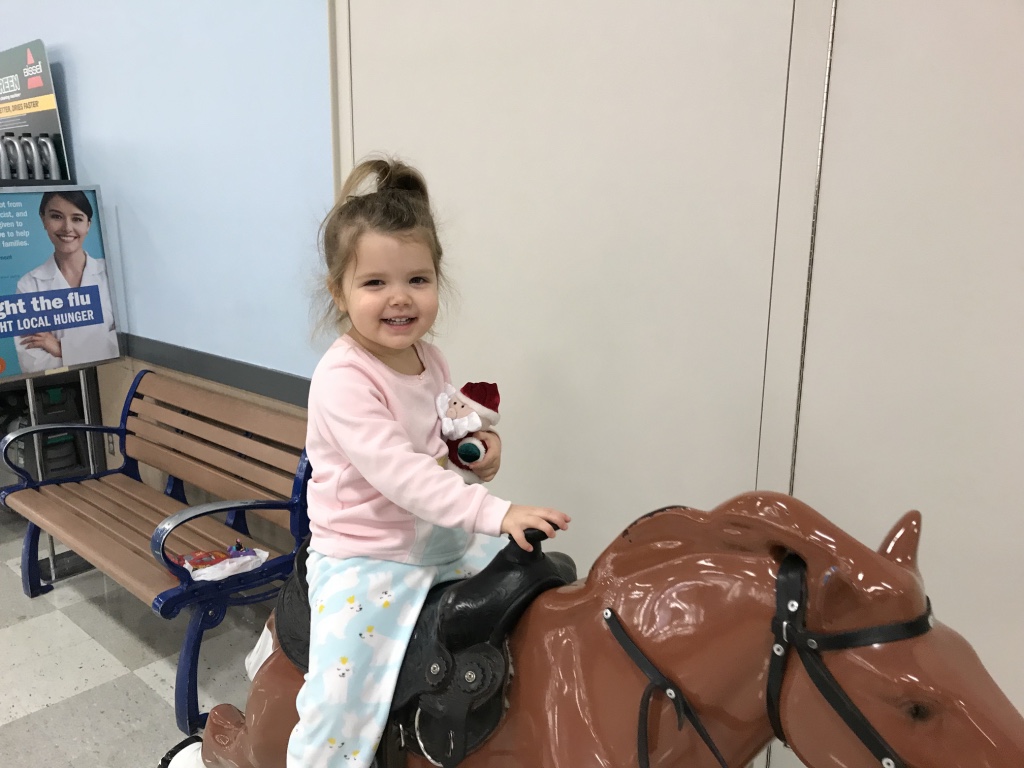 Lucy and I went to pick up Emily on Sunday afternoon. Lu was playing with blocks while my mom and I were talking, and when I looked over she had made this all by herself. Apparently, she was as impressed as I was! 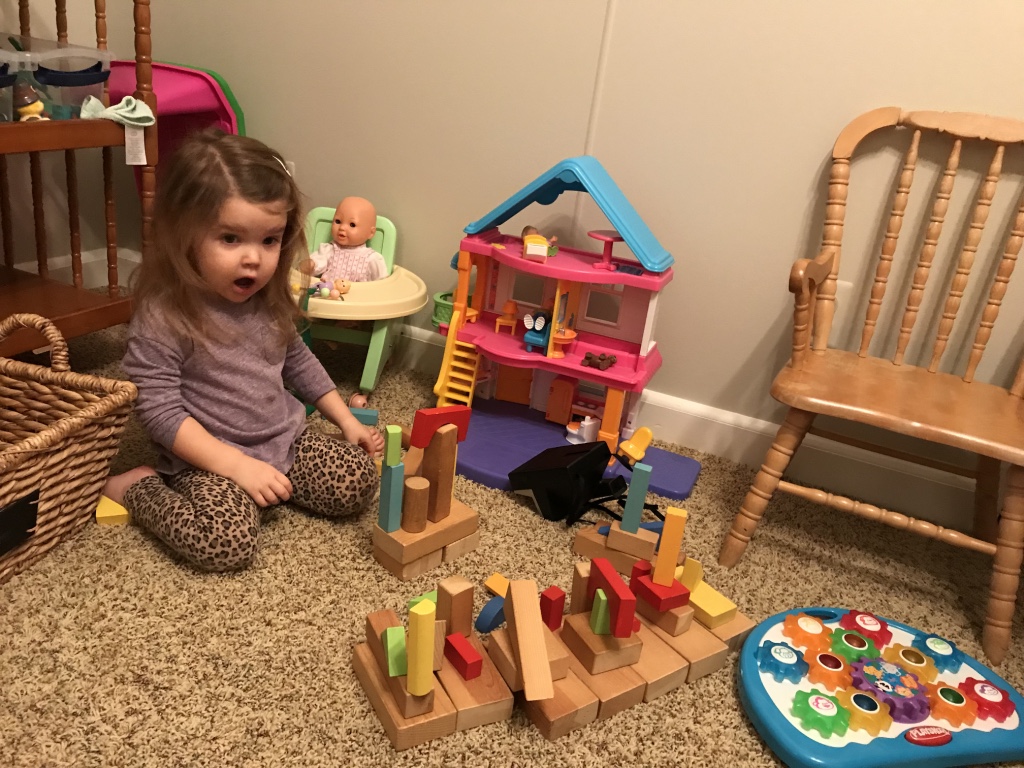 And that’s all she blogged. This post has been pieced together in between going in to rock Emily because she keeps waking up. Every night I tell myself that this is the night I’m going to start sleep training and letting her cry it out. But then I just can’t do it! Her cry is so loud and sad sounding . . . and she’s my last baby to rock!
I’m looking forward to having Matty home two extra days this week! #woo #hoo
A very Happy Thanksgiving to all! I’m planning to do a special post, but I also have to finish my 400 chocolate chip cookies for Friday so we shall see!
XOXO