I was so happy to have a short week last week! Matty ended up coming home from work early on Wednesday so our vacation started sooner than I thought!
I found the cutest set of Christmas books from Costco. There are two board books, two soft books, and two bath books, all depicting Christmas carols. I love reading them, and Emmy Roses loves chewing on them. 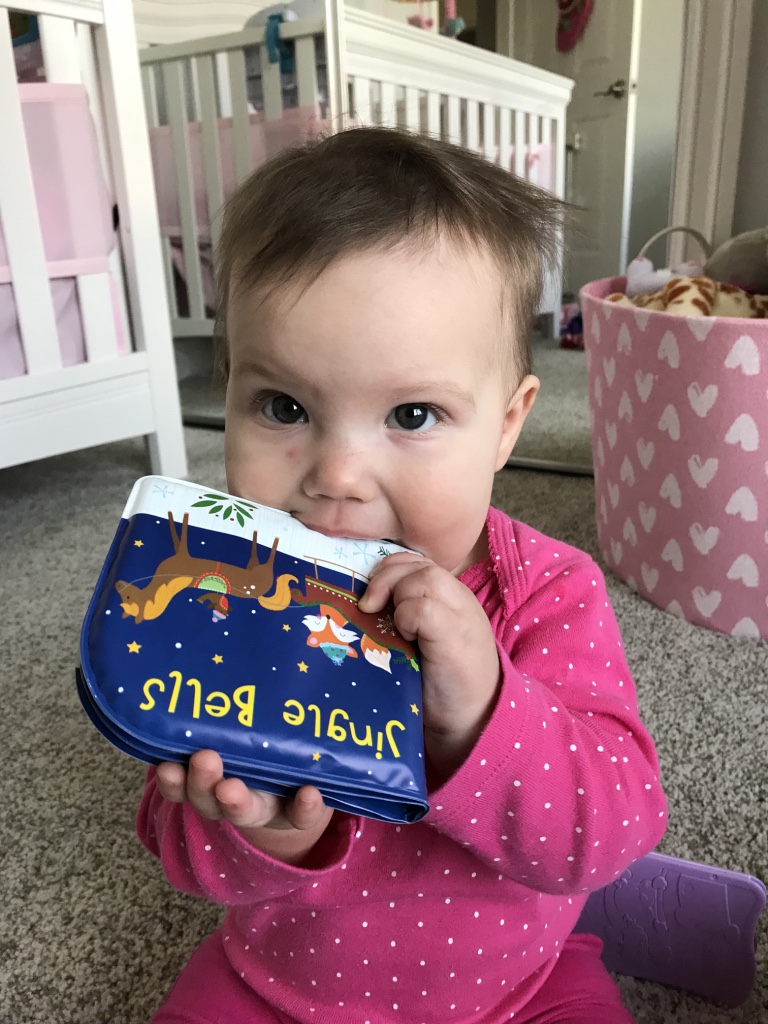 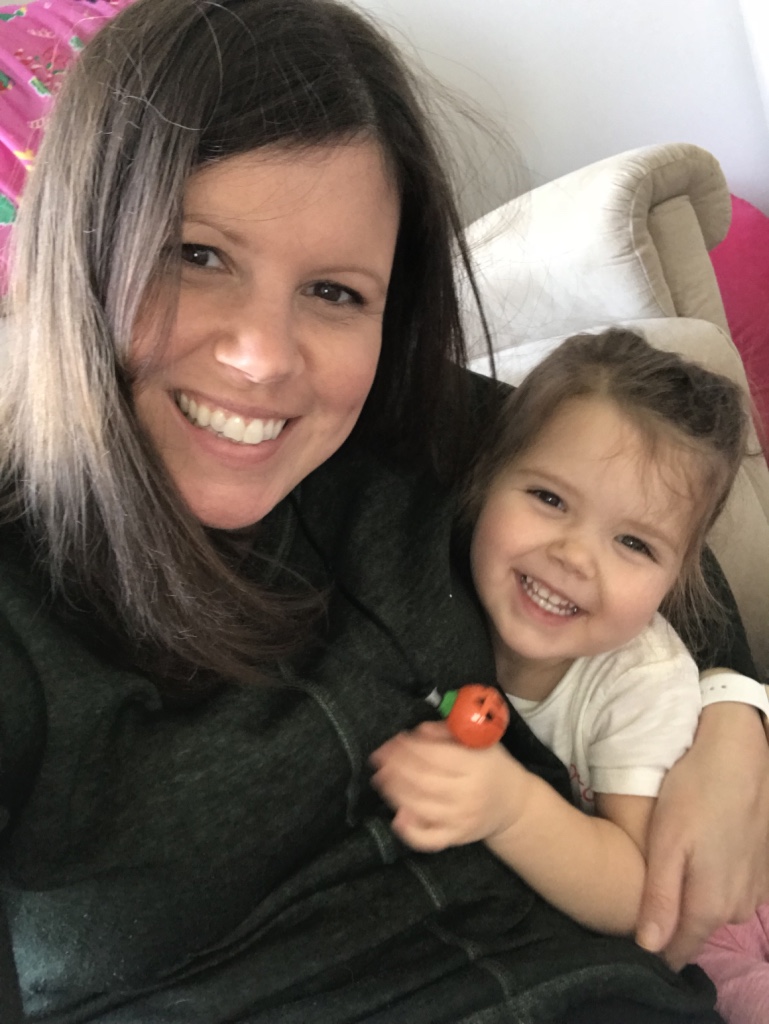 . . . and super cute smiles from another. Side note: Emily’s hair is at a weird stage where it does not lay flat no matter what I do! It needs to grow just a little more so it’ll stay down! 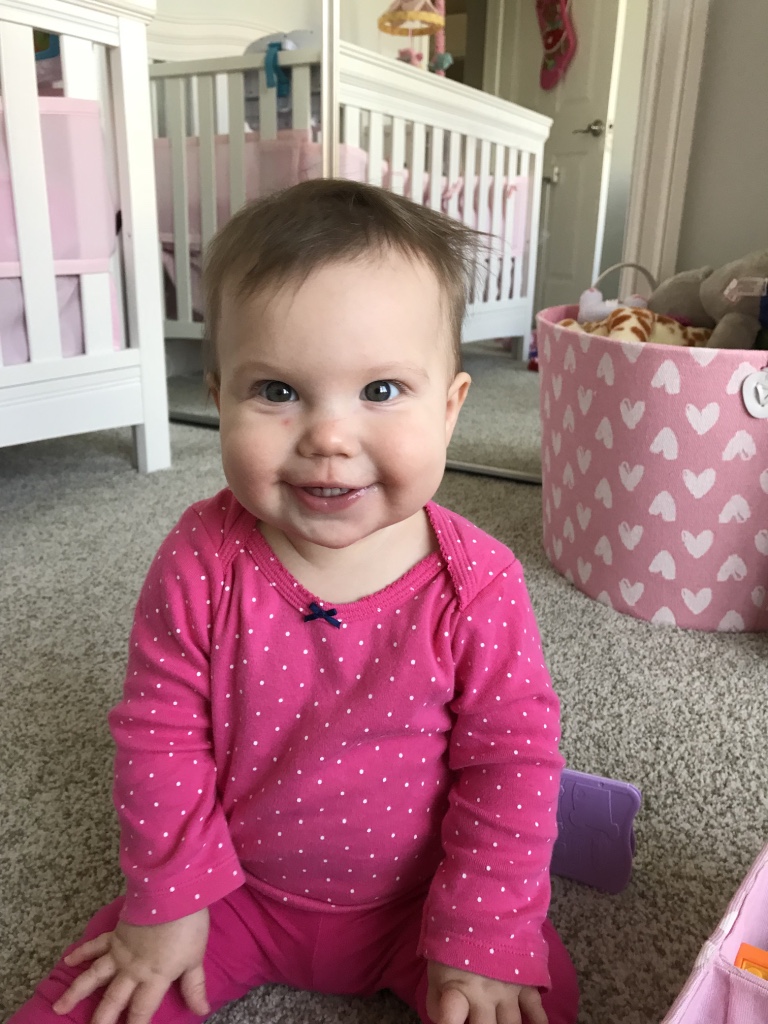 Lucy has been sleeping in lately, and she did not want to wake up for school last Tuesday. 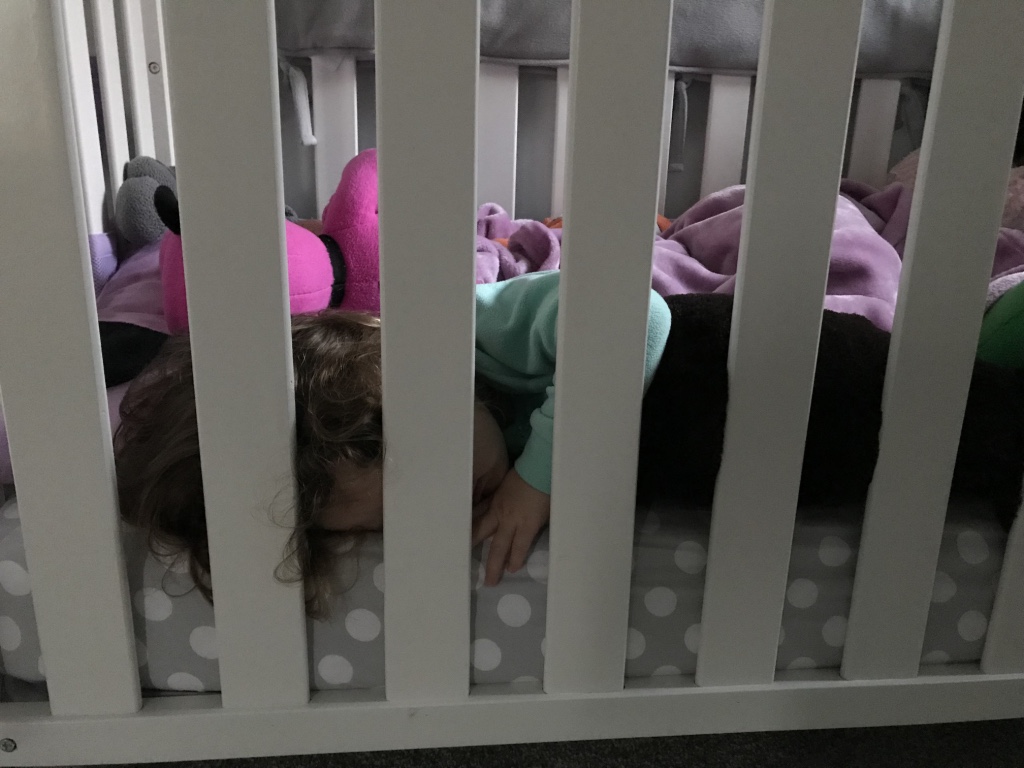 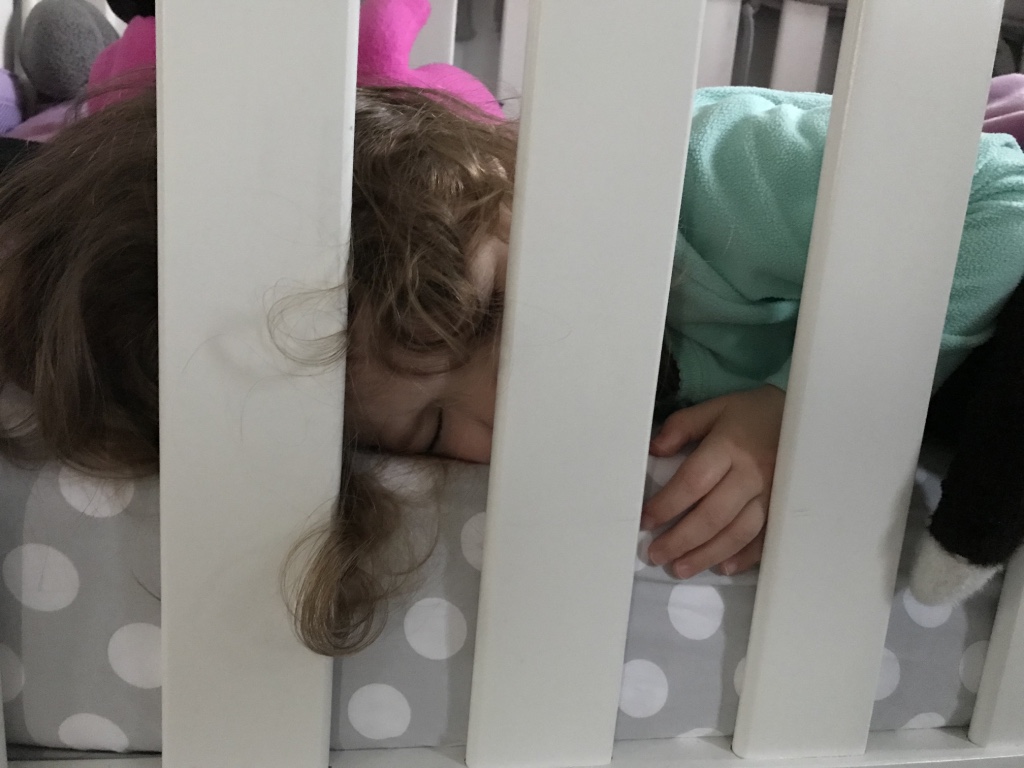 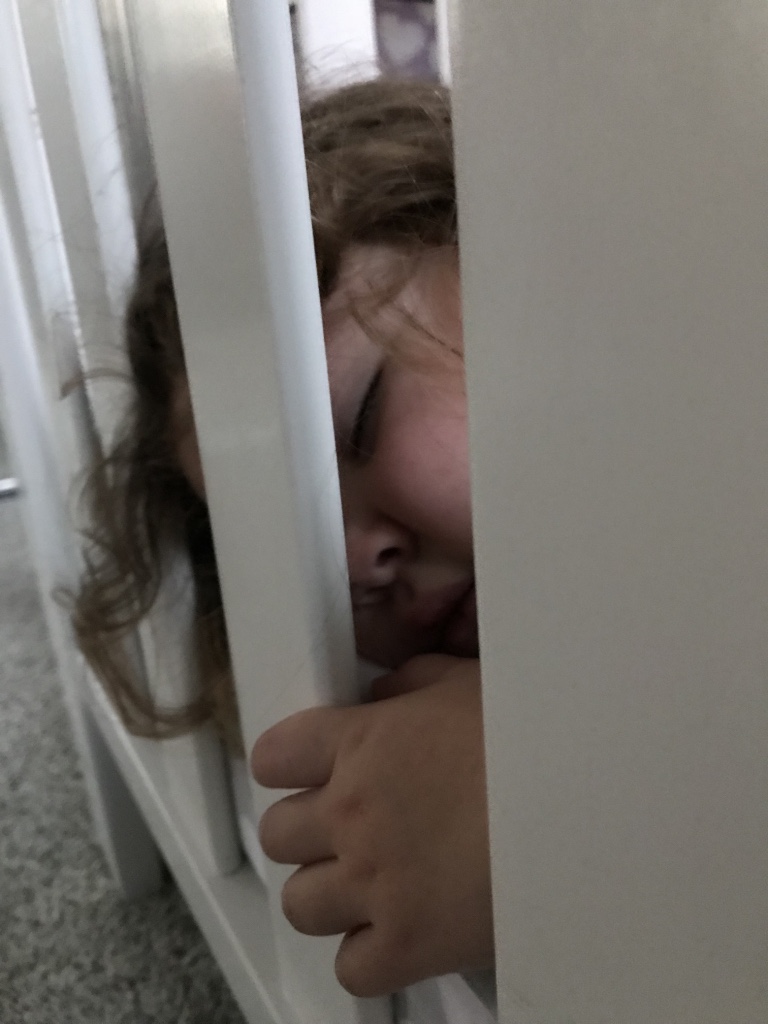 Once she woke up and got to school, she had a blast. See that macaroni necklace she’s wearing? So fun! 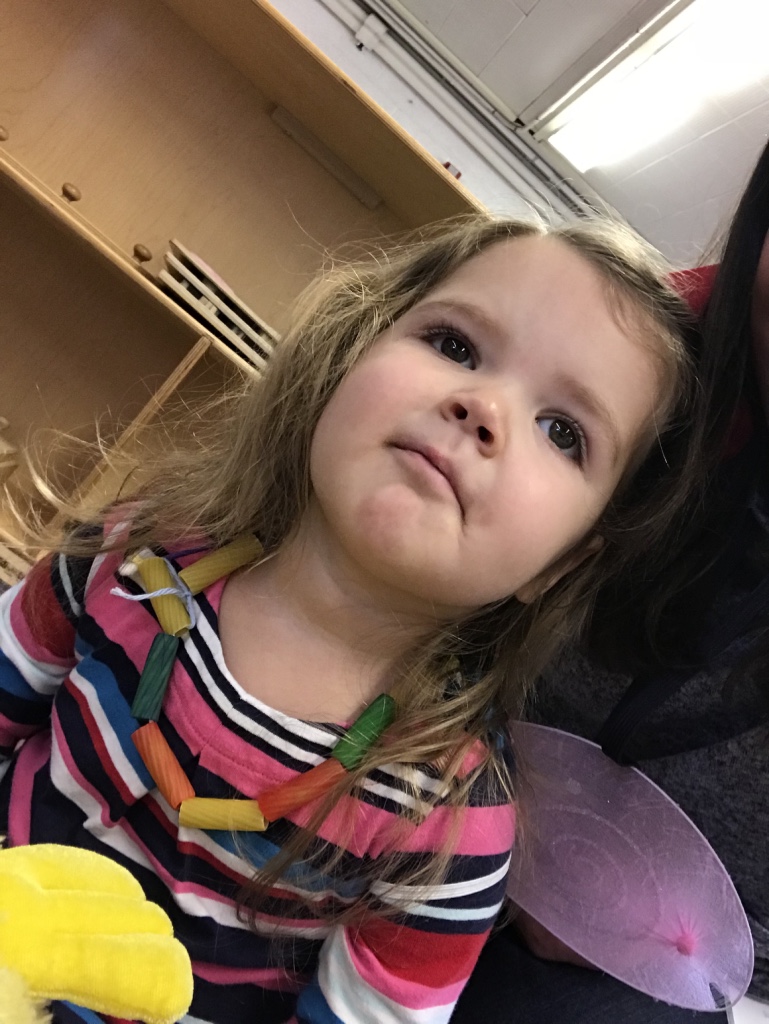 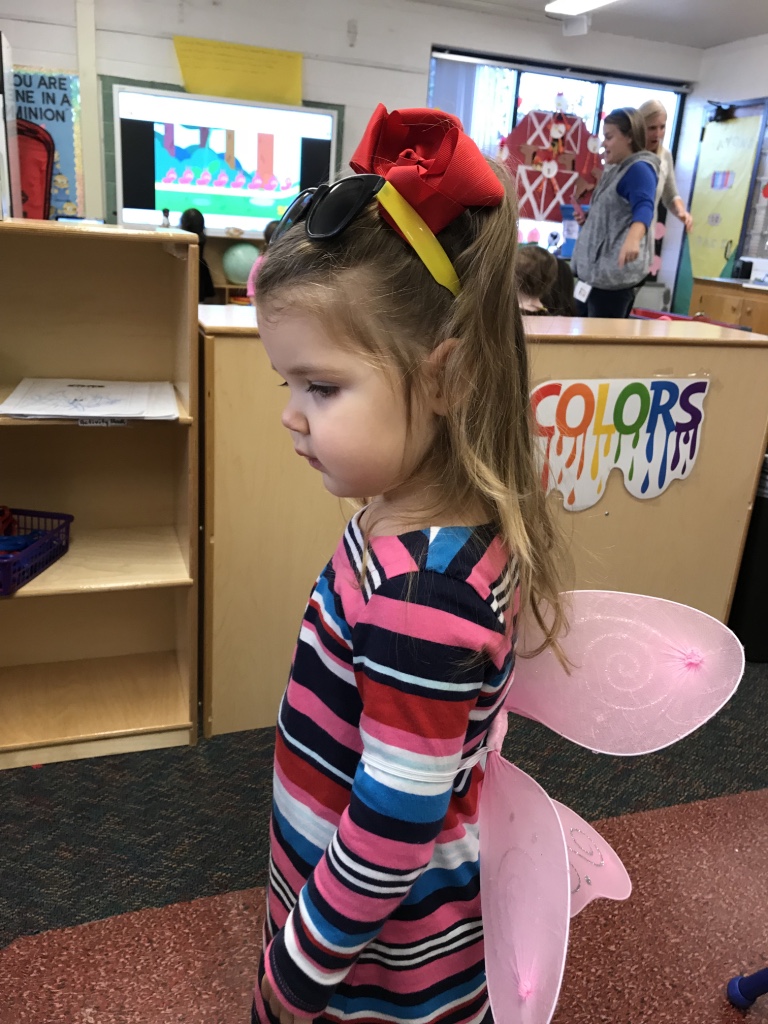 And then Daddy came home early, and we were officially on vacation! 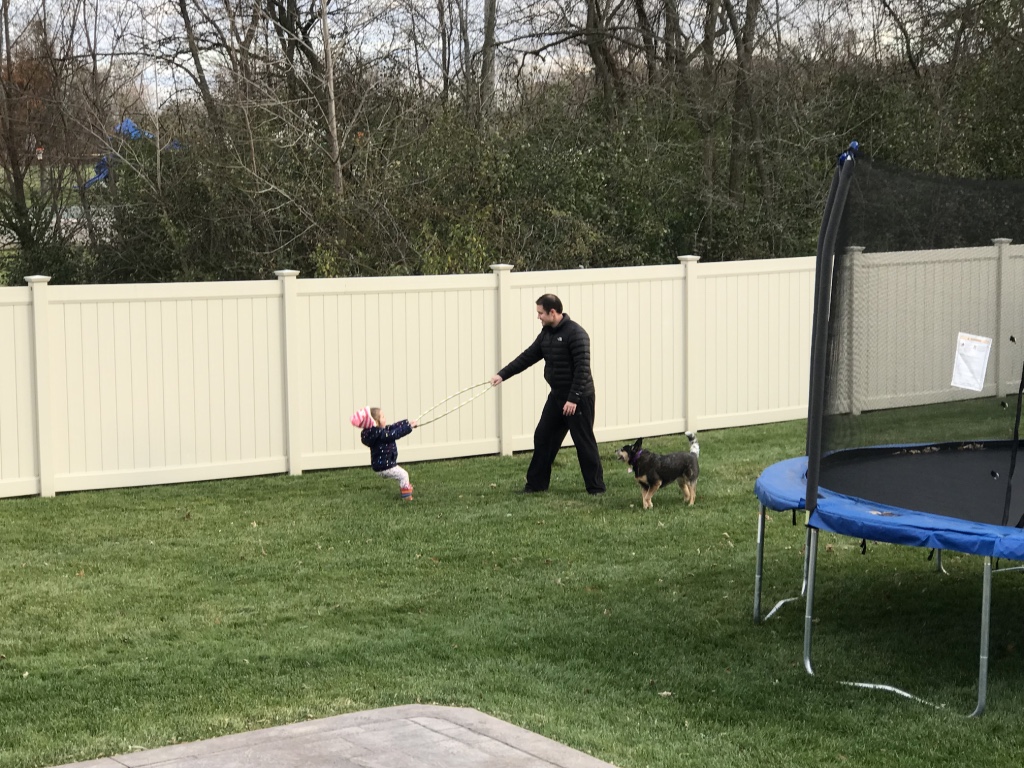 We started it off big by playing with Play Doh. Do we know how to party the night before Thanksgiving or what?! 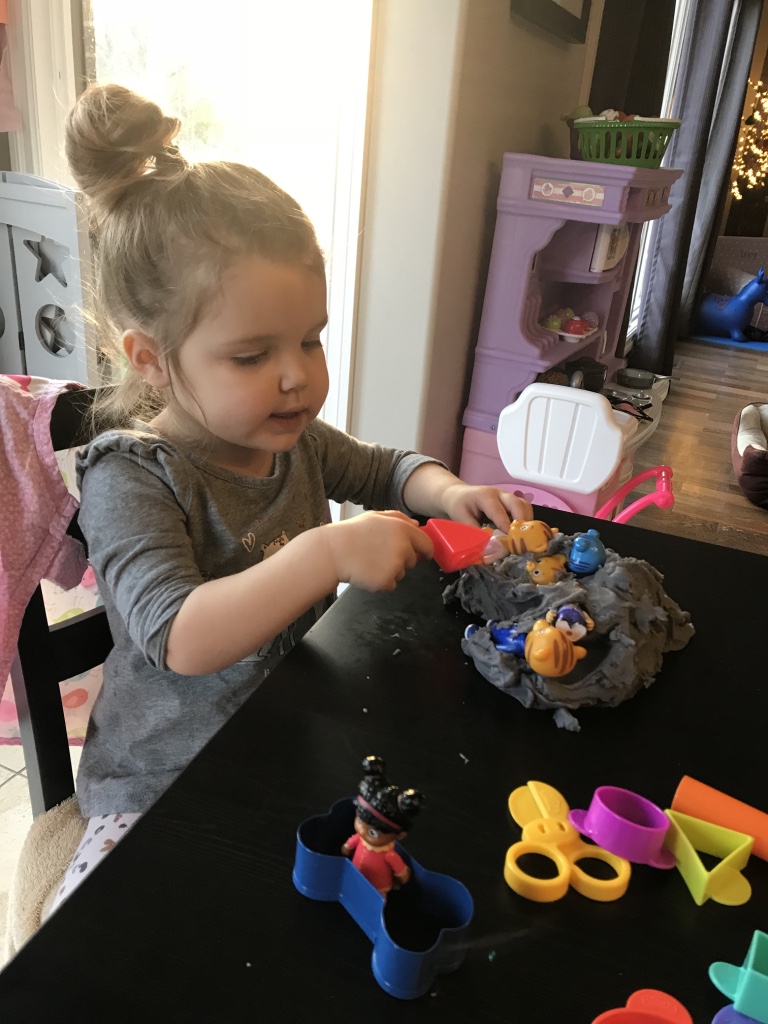 For about the past three weeks, this has been how Emmy slept when she woke up sometimes four times a night! I was having trouble letting her cry it out, but I finally reached my breaking point on Thanksgiving. We put her to bed Thursday night, and she cried for 24 agonizing minutes . . . and then she fell asleep and slept until 8:00 the next morning! She cried a little bit for each of her naps, and then fell asleep and took the best naps ever all weekend! It’s Monday afternoon and as I type this we are still going strong. Sleep training is not easy, but it certainly does work! 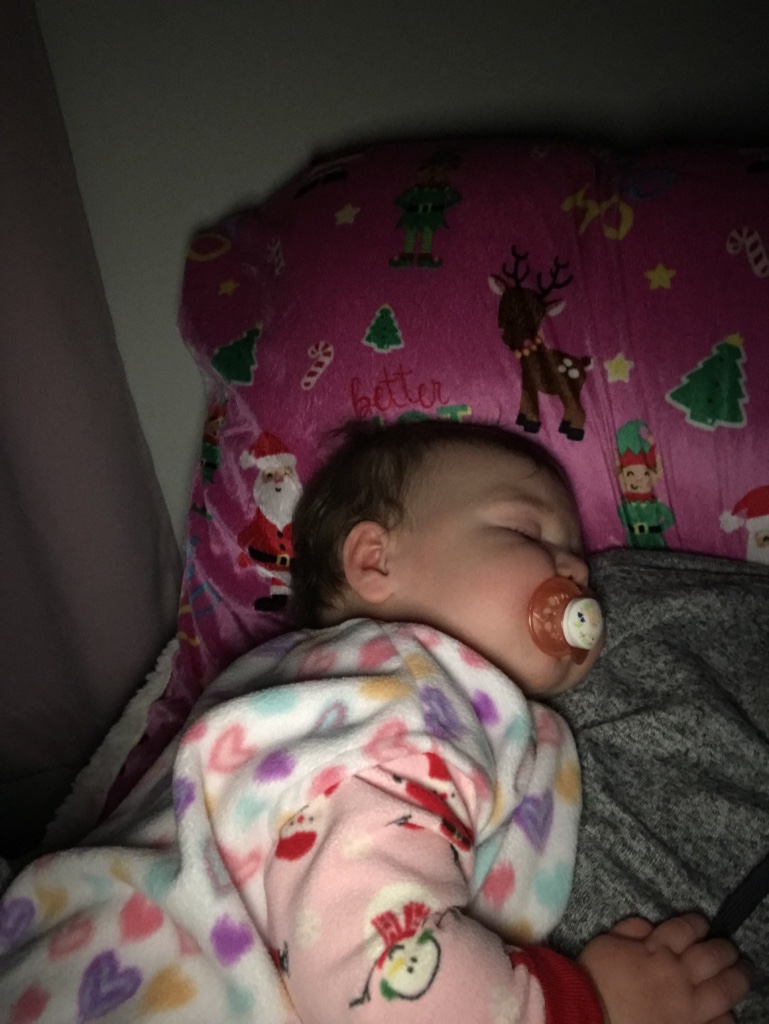 The day after Thanksgiving seems like an appropriate time to break out the matching Christmas outfits! 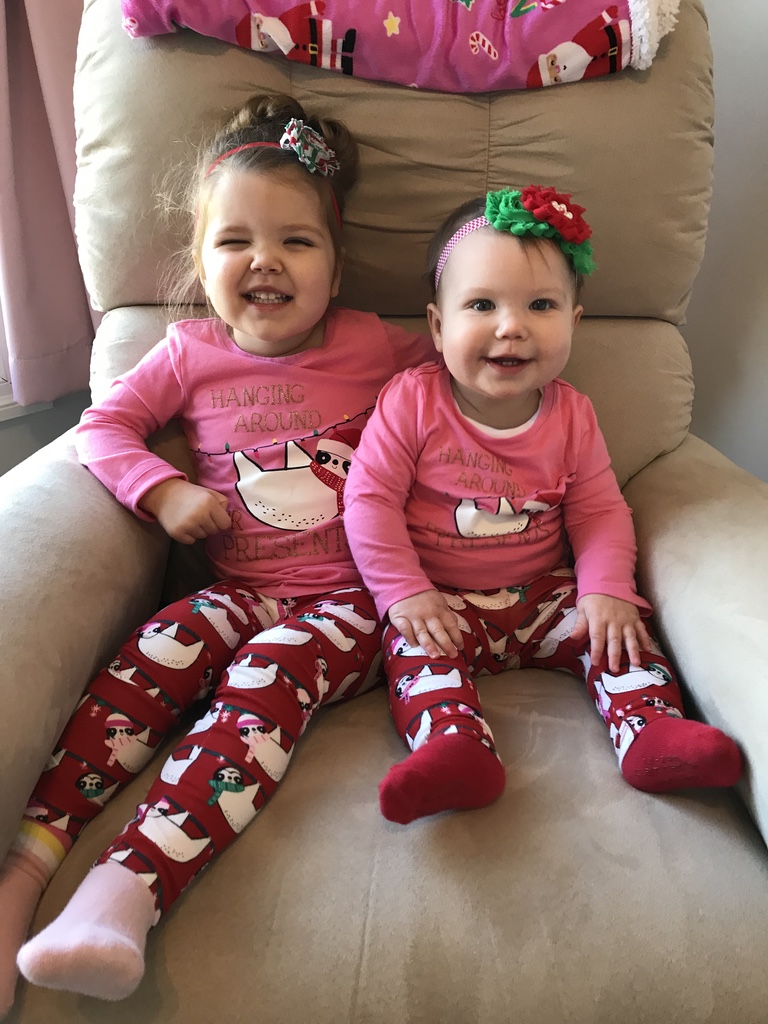 I’ve been talking about a giant cookie order that I’ve been working on for a few weeks now. We delivered the cookies on Friday, and it felt so good to be finished! Four hundred chocolate chip cookies is nothing to sneeze at! Carla made 100 sugar cookies, and they were adorable! 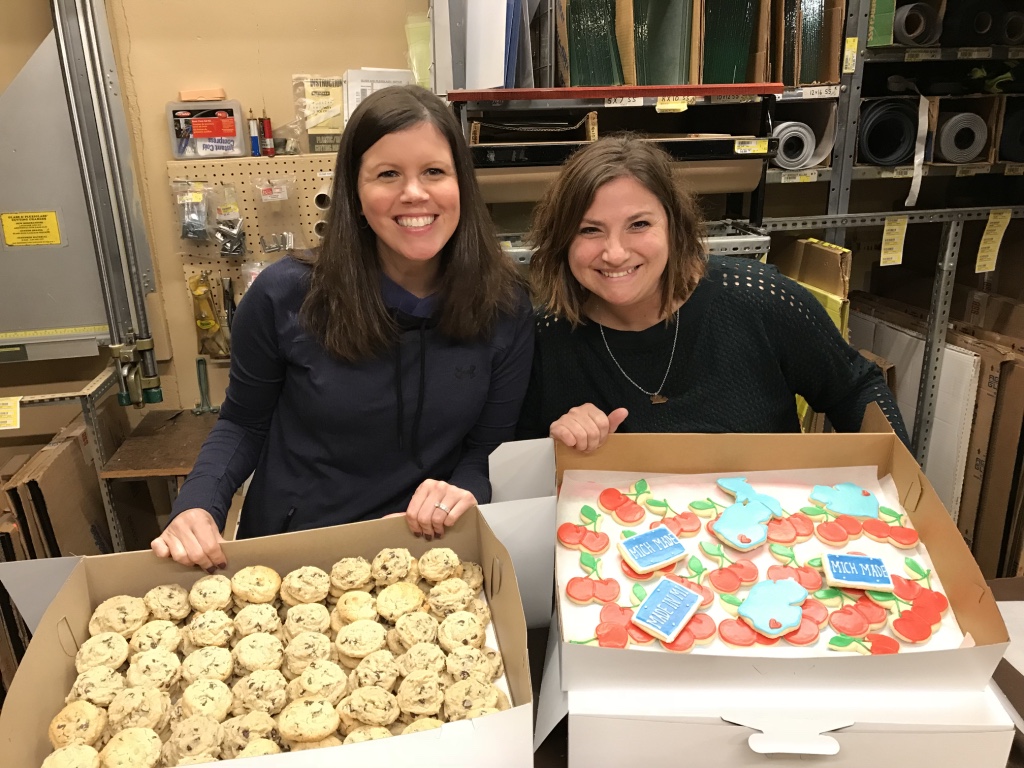 It was a pretty mild day on Friday, so we headed to the park in the afternoon. 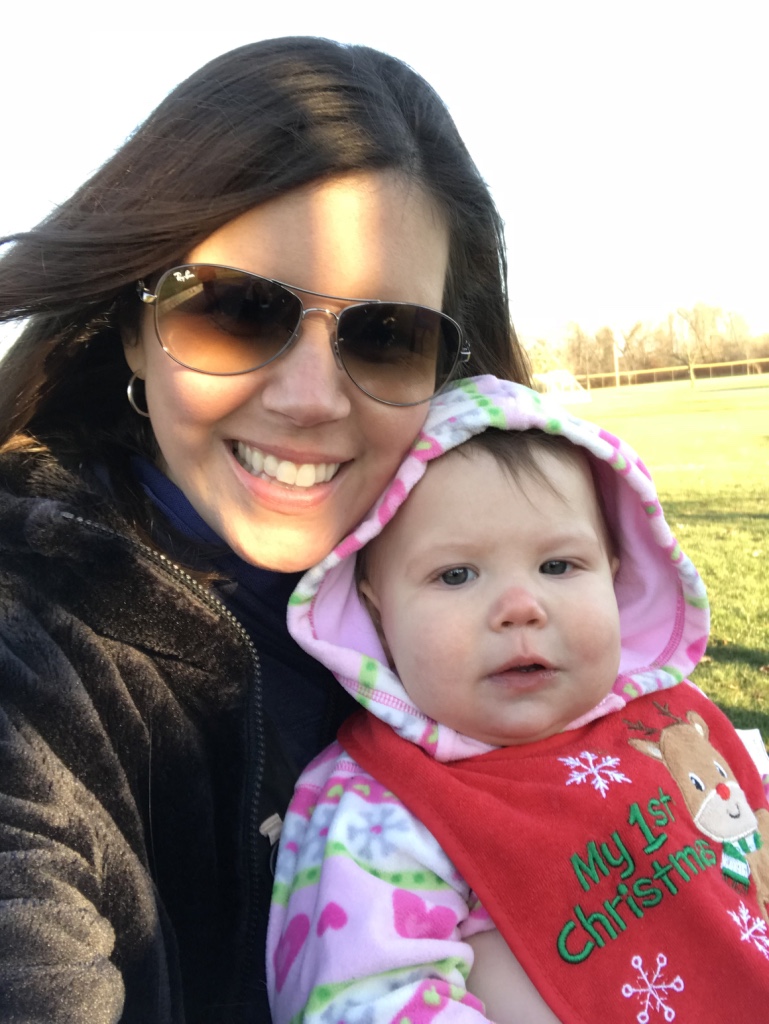 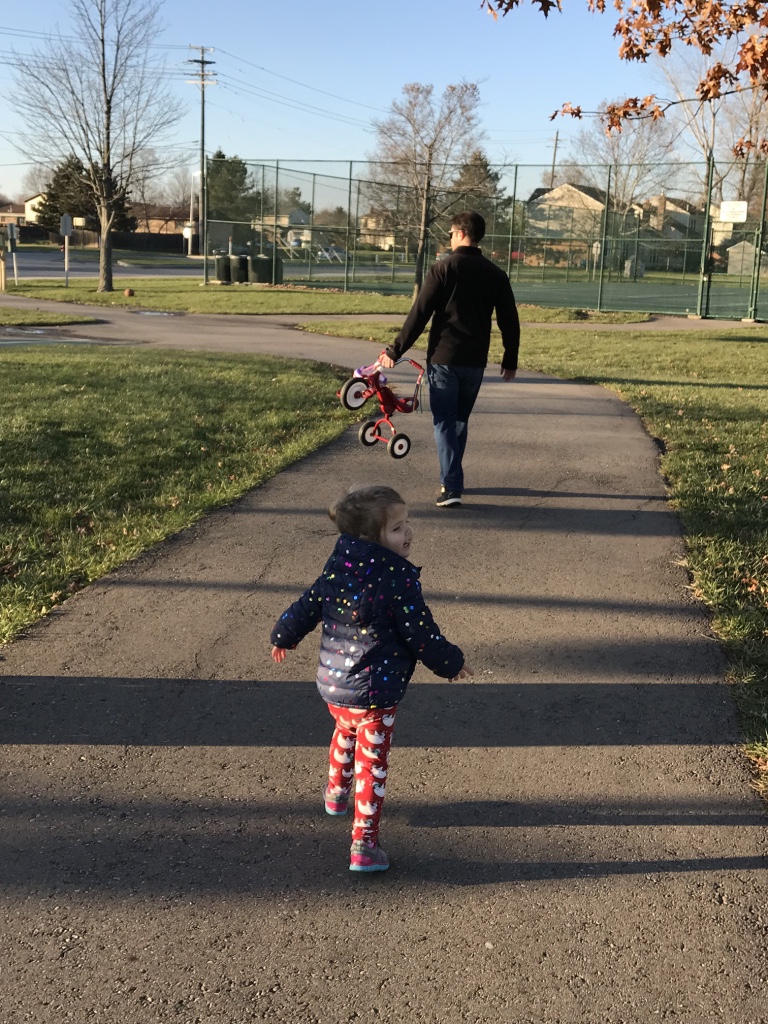 Double grocery carts! Emily really enjoys sitting in the cart now, and it’s nice when Matty goes with us so both girls can have a cart. 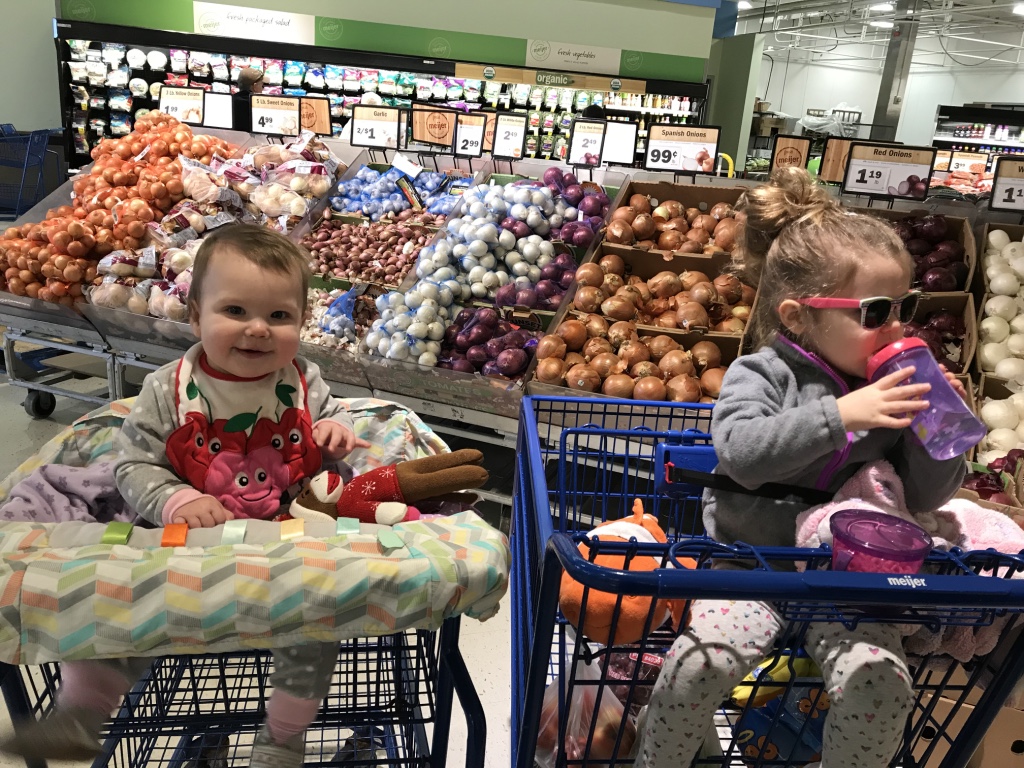 I posted about these Mommy and Me aprons from Hobby Lobby awhile ago. We tried them out for the first time over break. Lucy loves hers! 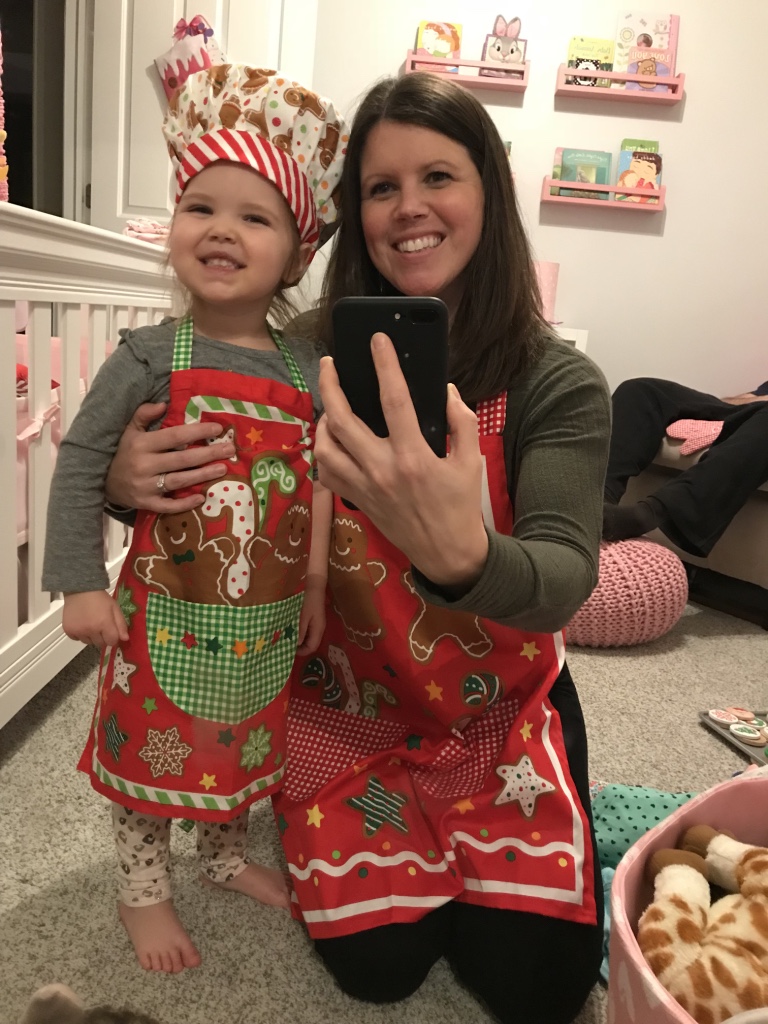 Emmy is still too small for her apron, but she sure enjoyed playing with the pretend sugar cookies. I bought this Melissa and Doug Christmas Cookie set on clearance last spring, and I’m so glad I did! Lucy is having a blast “baking” and “decorating” her cookies. 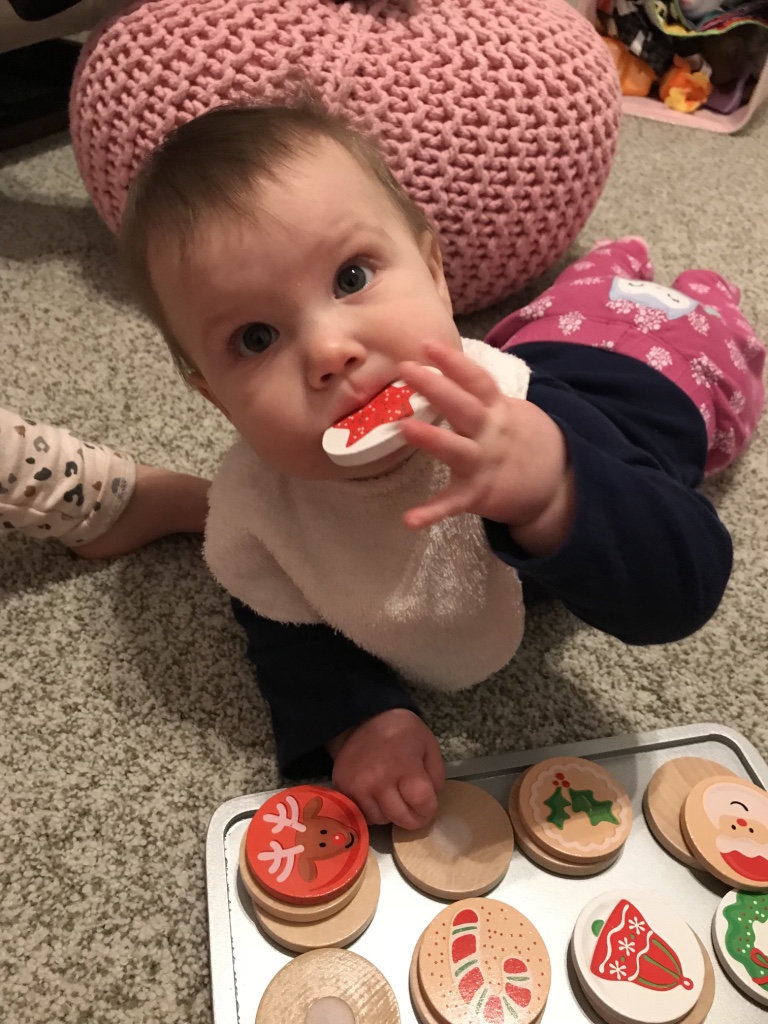 Our friends, the Heinbuchs, got a new puppy! We went to a pet show with them a few weeks ago and met Humphrey Bogart the puppy at one of the booths. He was so so sweet . . . and then about a week later we get a text from the Heinbuchs saying they just adopted him! Lucy loved playing with Bogey. 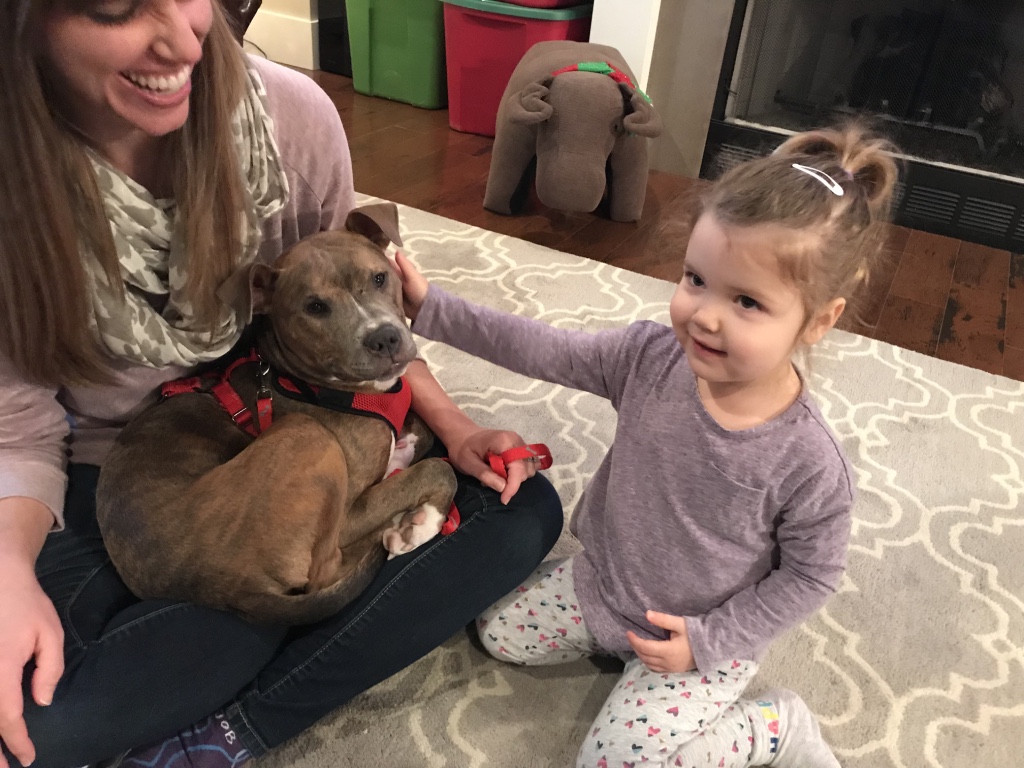 Lucy got ahold of my phone one day and took some pictures. I found this one, and I found it creepy/artsy/surprisingly interesting. I don’t know how she figured out how to make it black and white! 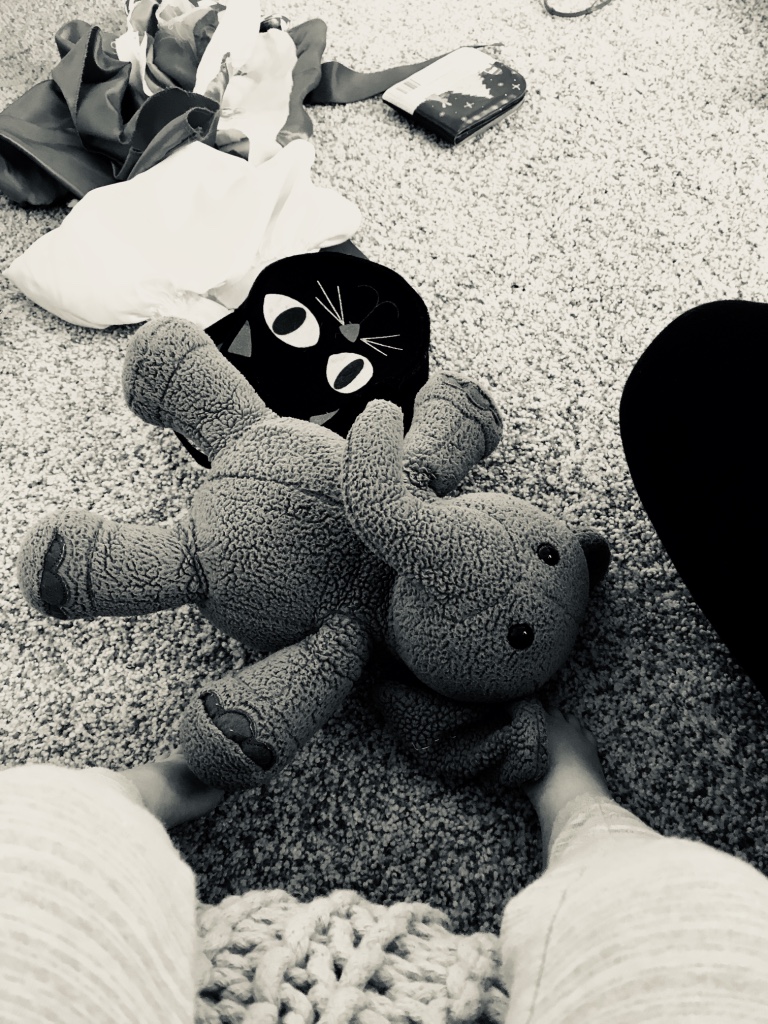 We spent Sunday doing a lot of cleaning . . . or as much as we could get done with two girlies on the prowl. Matty and Lucy put on their headphones and vacuumed the basement until Lucy started walking upstairs saying, “I pooped mommy. You can’t vacuum with poop in your diaper.” #sotrue 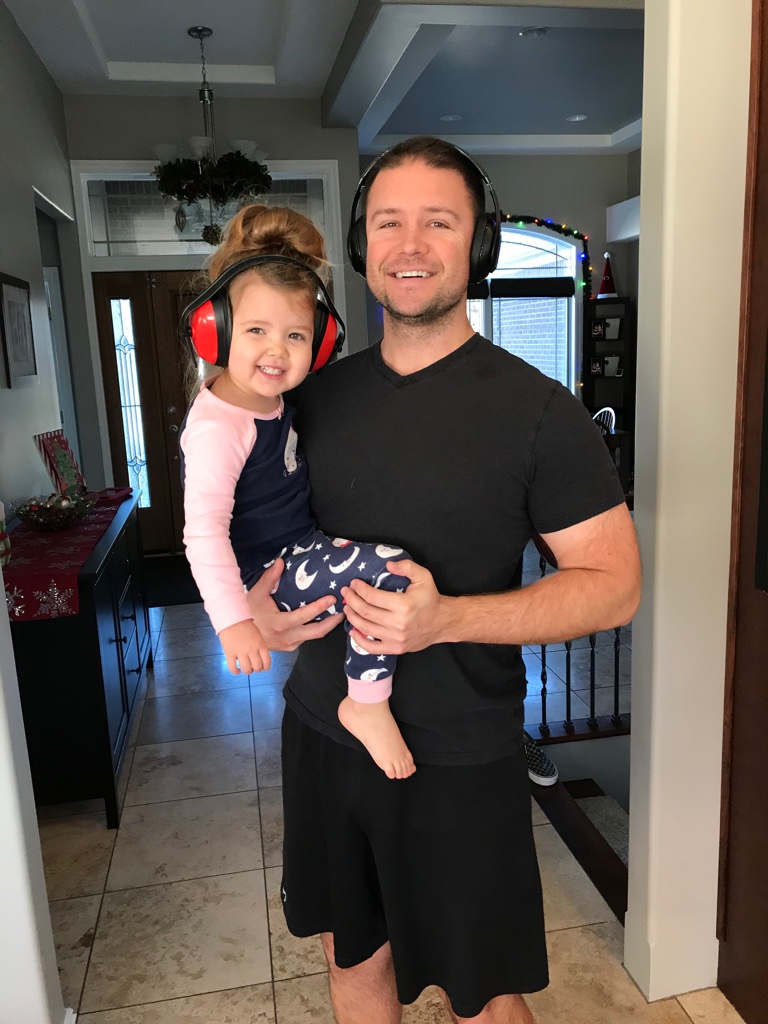 Miss Roses has been having a blast army crawling between her room and Lucy’s. 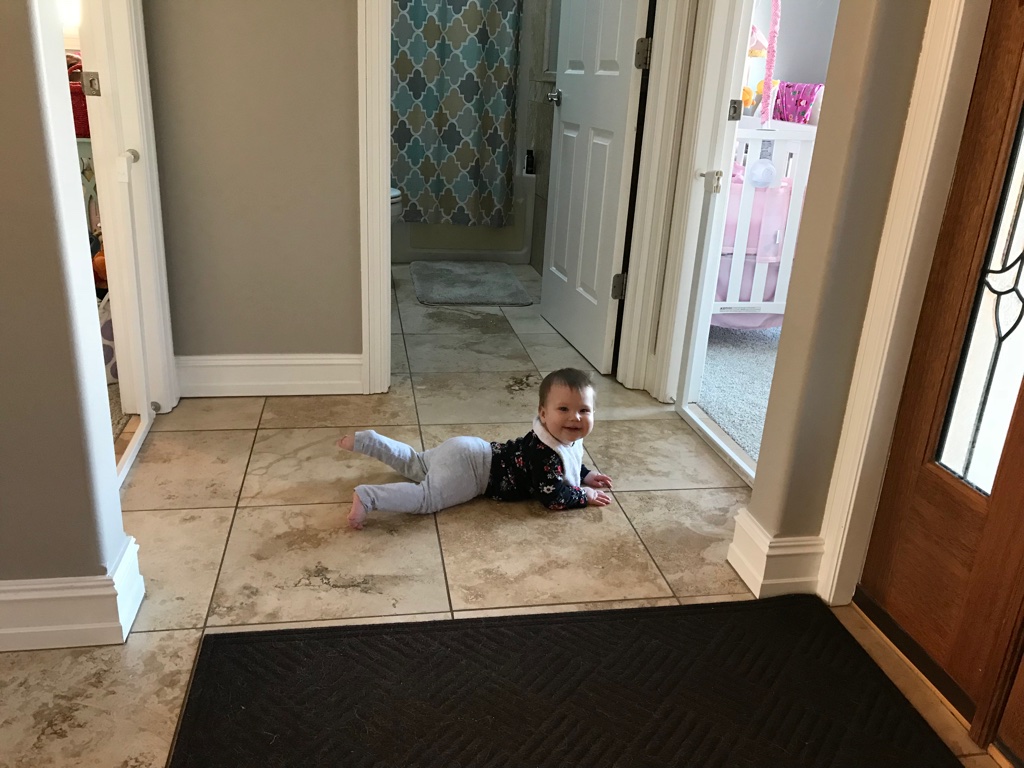 And there she goes again! 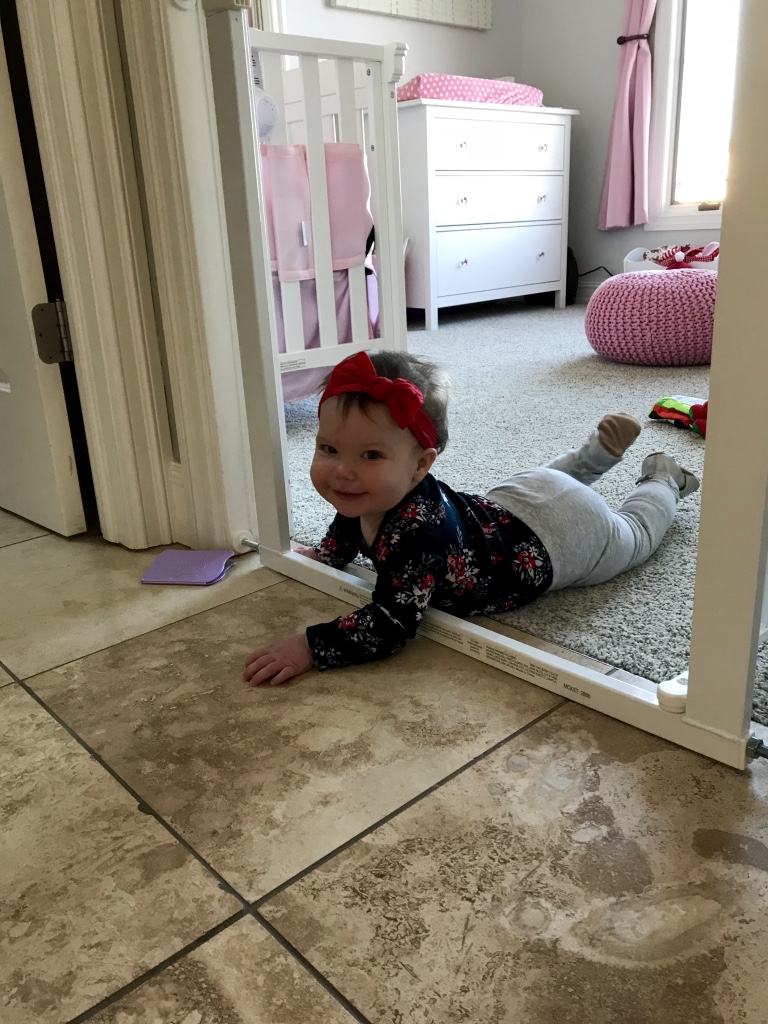 We ended our vacation with a homemade chicken pot pie! (Not the crust, just the inside. Believe it or not, I’ve never learned how to make pie crust!) I make one, maybe two, pot pies a year and they are delicious! 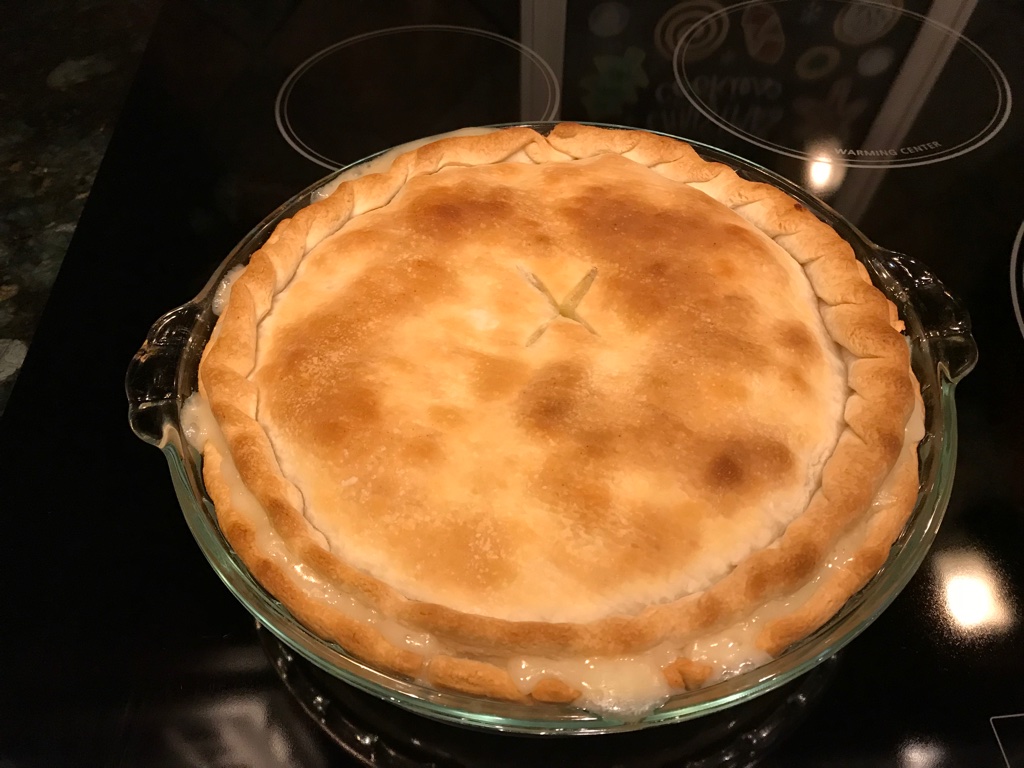 We had such a great Thanksgiving break, and now it’s only four weeks until Matty is off for Christmas!
XOXO