Where do I even begin? Maybe with a warning: There will be lots of talk about peeing and pooping in this post!
Isn’t there a saying that you have to experience failure in order to appreciate success? I guess I’m going to operate under that motto for awhile because, you guys, I failed BIG TIME at potty training this weekend. I did everything I could to set us up for success. I got tons of supportive texts from friends and family. But they weren’t hear to see my sweet girl go CRAZY. Let’s start at the beginning . . .
Friday morning we got up and took Emily Roses to my mom and dad’s house. She was going to spend Friday night with them and then go to Grandma Ri’s for Saturday night. Matty, if you’ll remember, went to Kentucky for a work golf outing.
So we ate lunch at my parents’ house, and then Lucy and I headed home to start our potty training bootcamp weekend. Now, I realize the power of positive thinking and all of that jazz. And I was VERY positive with Lucy, but I had this nagging feeling in the back of my mind that I was going to be bad at this. Turns out, I was right.
We were all set and ready to use the potty! 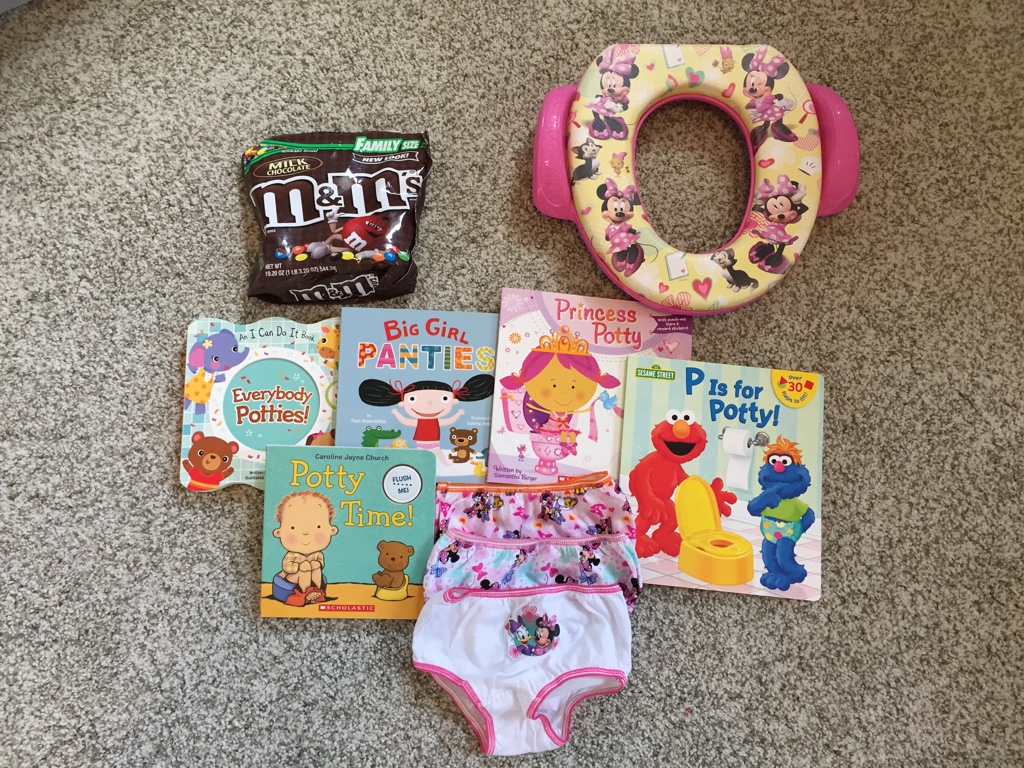 Lucy had been pretty excited to get her big girl underwear, and I was met with minimal resistance when it was time to put them on. She did not take a nap on Friday (or ANY day this weekend), so I let her watch a few Daniel Tiger episodes so she could rest for a bit. 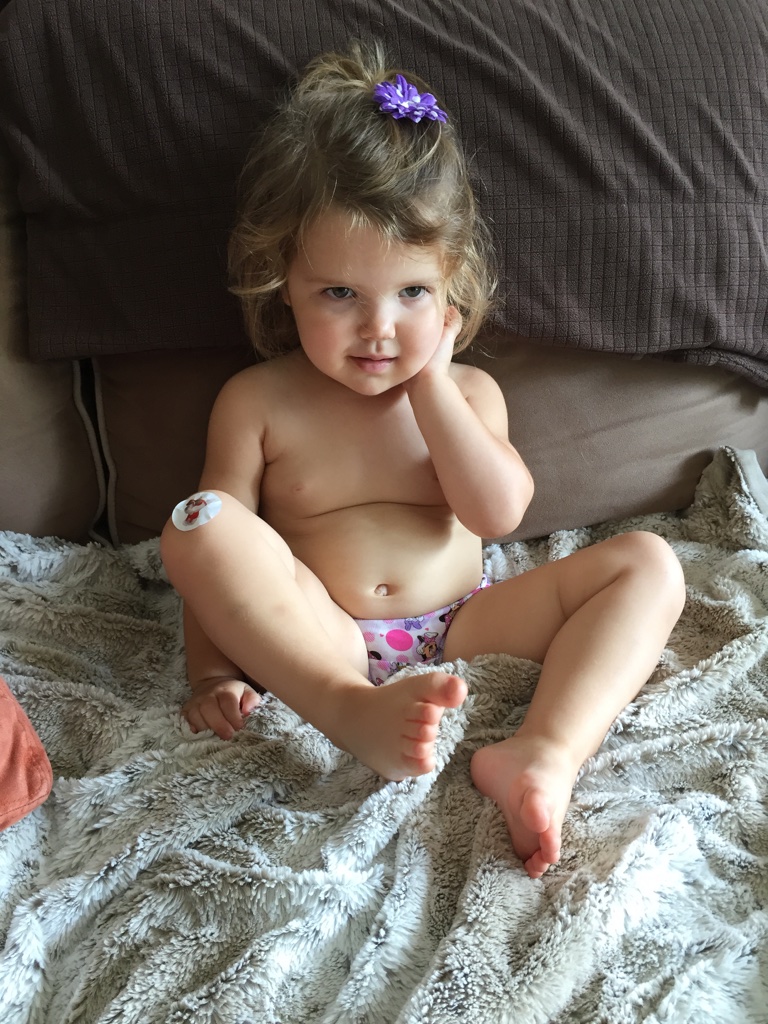 She had her first successful peep on the potty, and we celebrated by going to play in her room for a bit. I figured we were safe since she had just peed. 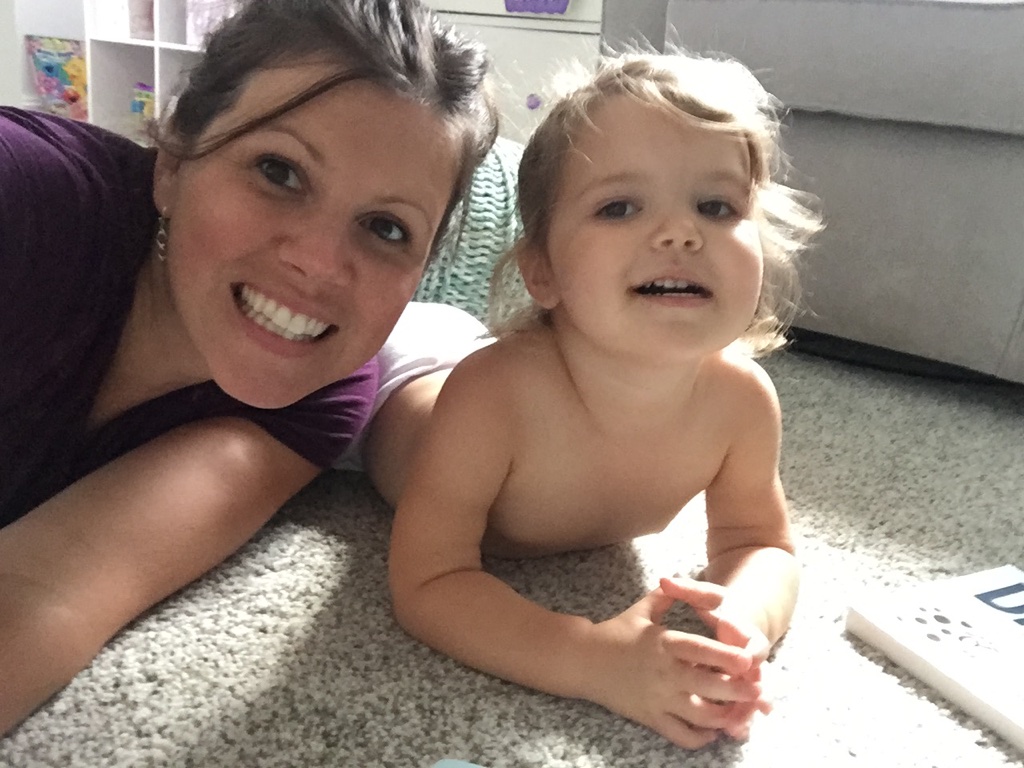 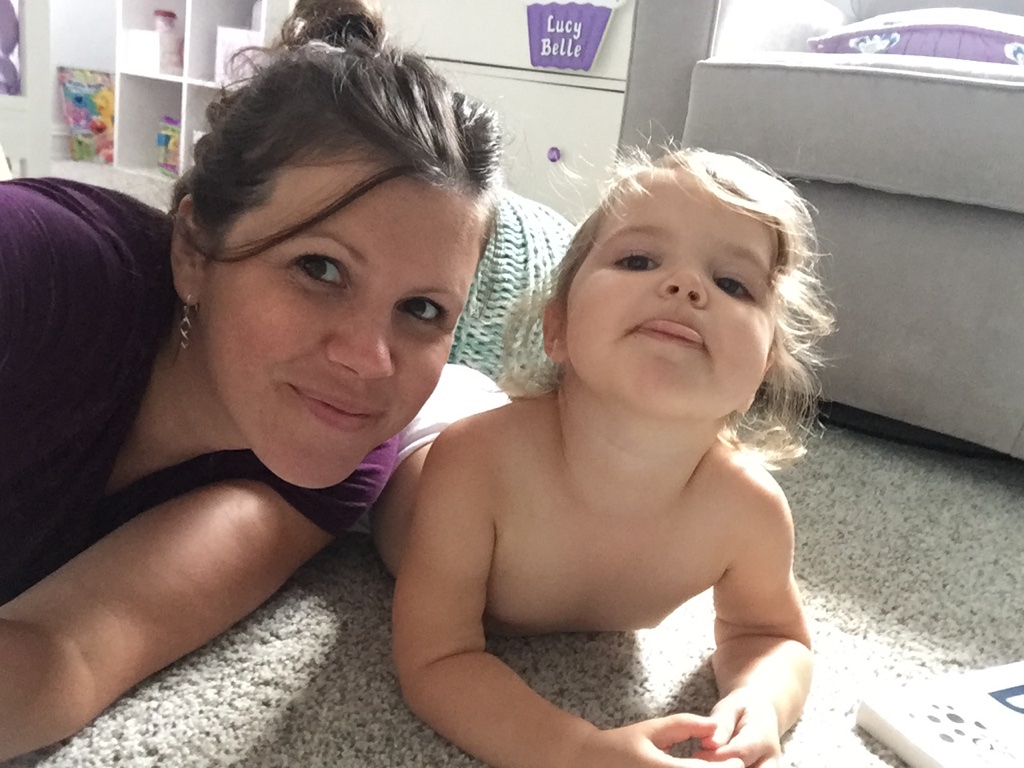 I went into the kitchen to get Lucy some water, and I hear “Momoo, I pooping!” I ran to the bathroom ready to praise her, and I found this. I asked her if it felt gross to be sitting like that with poop in her pants, and she said, “No, mommy, it feels GOOD!” #thefirstwarningsign 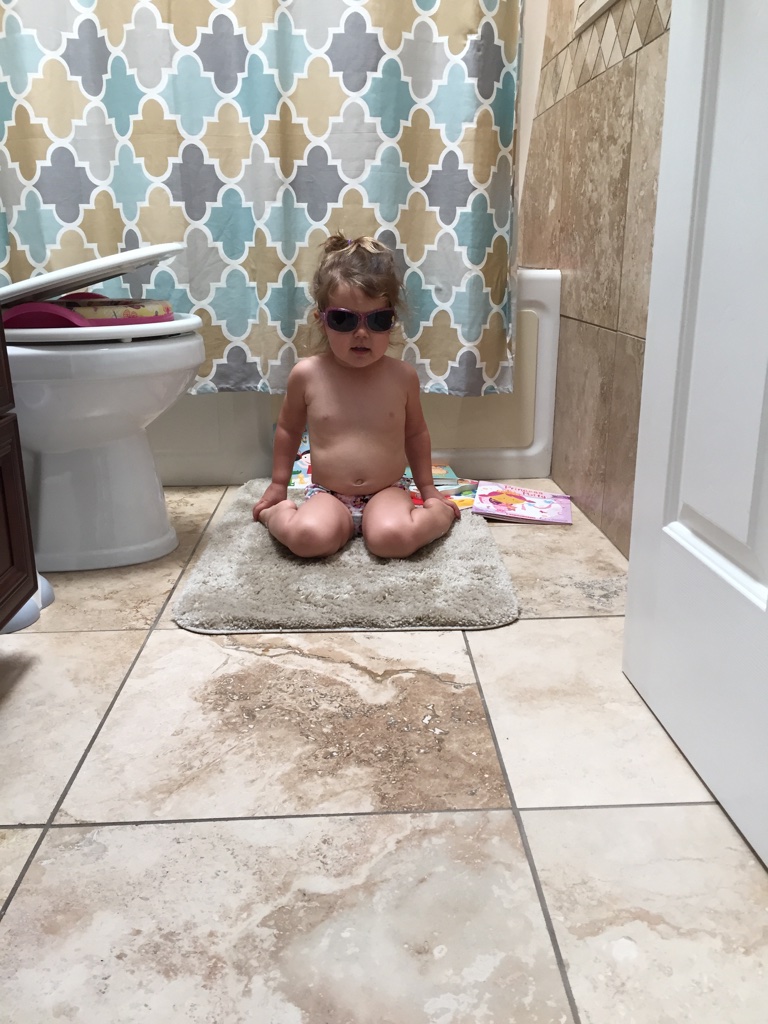 So I cleaned her up, threw out the underwear (there was no way I was going to try and clean them up), and we went about our afternoon. She had two more successful peeps, two peep accidents, and another poop accident. I was feeling a little defeated. Everyone kept telling me that she was ready and that because she’s so smart it’ll be a piece of cake. #nope
Lucy passed out just after 7pm on Friday, and I was so happy not to have to worry about potty accidents. Since Matty was gone, I had envisioned getting all kinds of things done around the house at night, but I was TIRED! Mentally and physically . . . I was useless. So I cleaned up, showered, and started rewatching Gossip Girl on Netflix.
I woke up Saturday morning with a positive attitude, and a freshly made incentive chart. 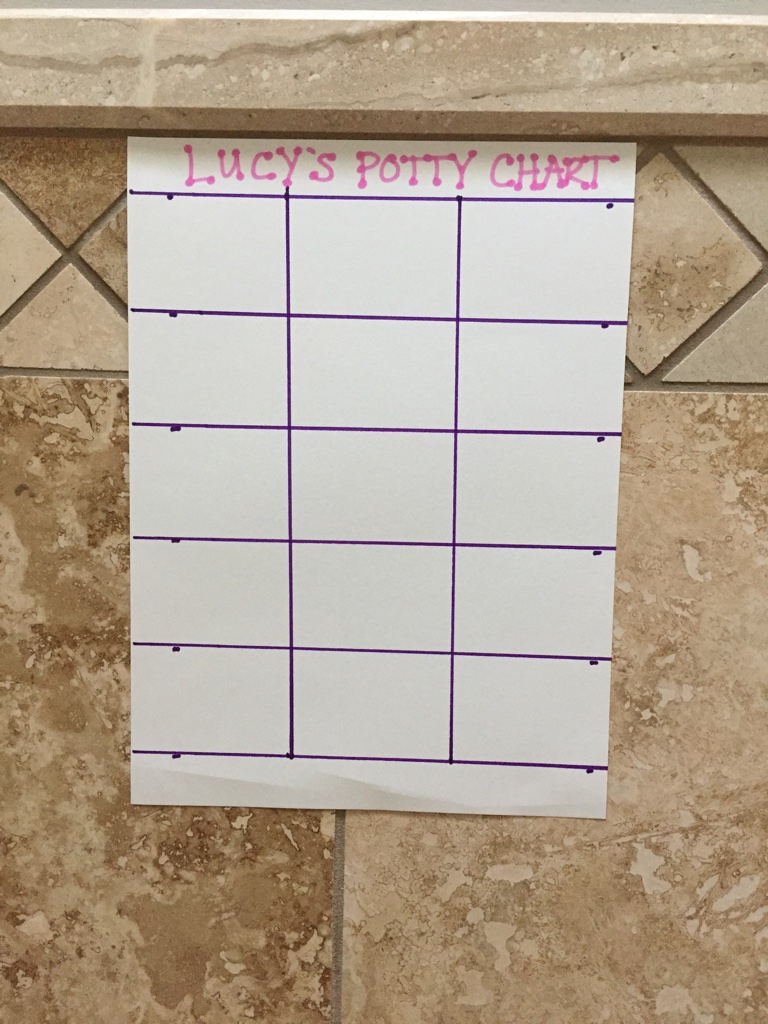 When Lucy first woke up, she did not want to take her nighttime diaper off. It took me awhile, but I eventually got her to take it off and sit on the potty. With her Kindle. #moderndaypottytraining 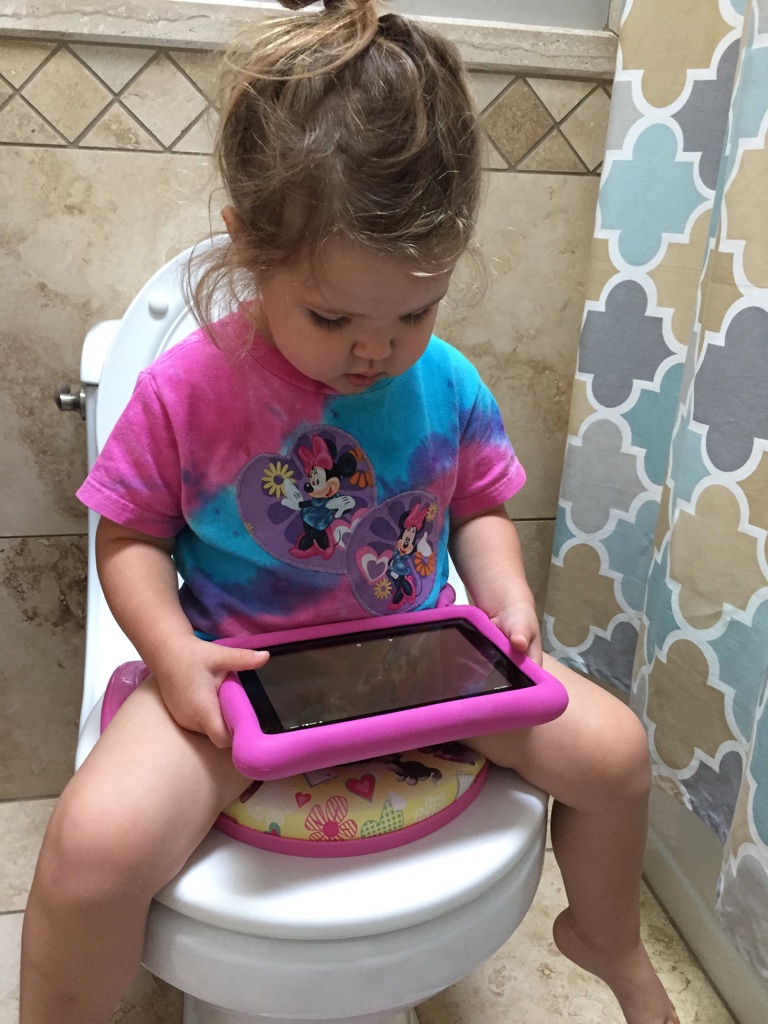 And she pooped!! Yes! We FaceTimed all of our family, and she happily told everyone. I knew Saturday was going to be so much better! 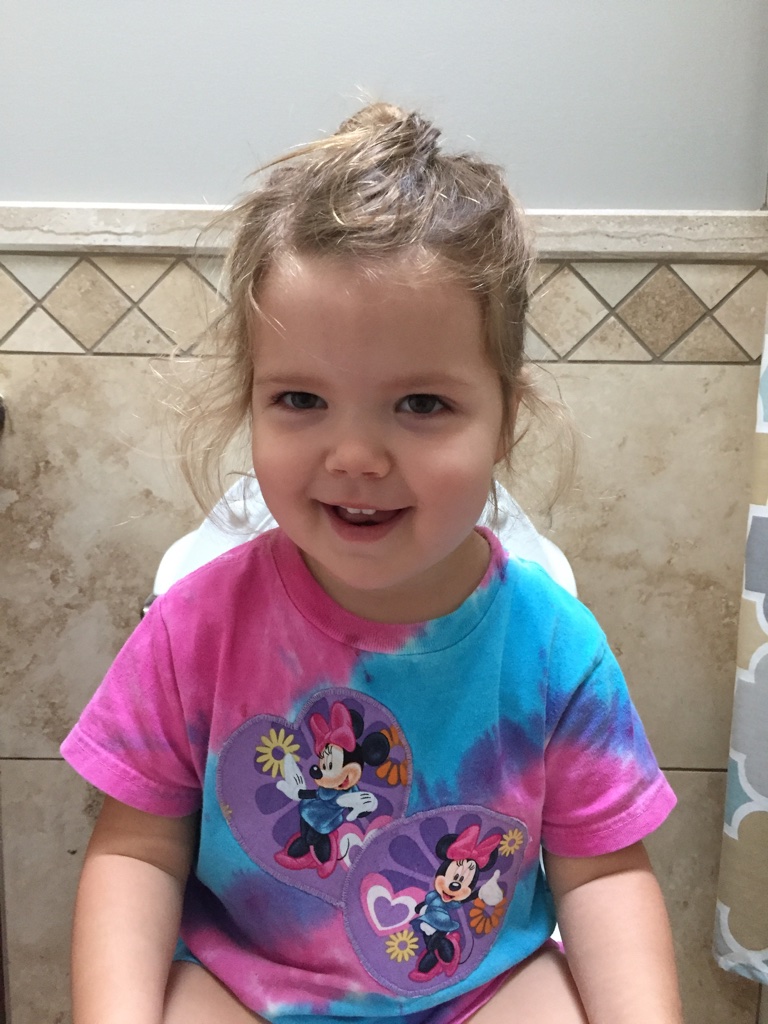 I was wrong. After the successful poop, it was just one accident after another. Plus, Lucy did not want to sit on the potty. It’s impossible to MAKE her sit on the potty. I tried everything, but she wasn’t having it. It was a beautiful day so we headed outside to pick tomatoes. While we were out there, Lu squatted down on our patio and said “I pooping outside momoo!” The unfortunate part is that, at this point, she was only wearing a loose pair of shorts. So when she stood up the poop fell right out on to our patio! #imnotkidding #stoplaughing
So I cleaned her up, put on a new pair of shorts (cuz at this point she was anti-panty), and turned on the sprinkler. I just needed a break. I wanted to not have to worry about whether her wet shorts were from the sprinkler or pee. I realized I’m supposed to be the strong one here, but I was frustrated. 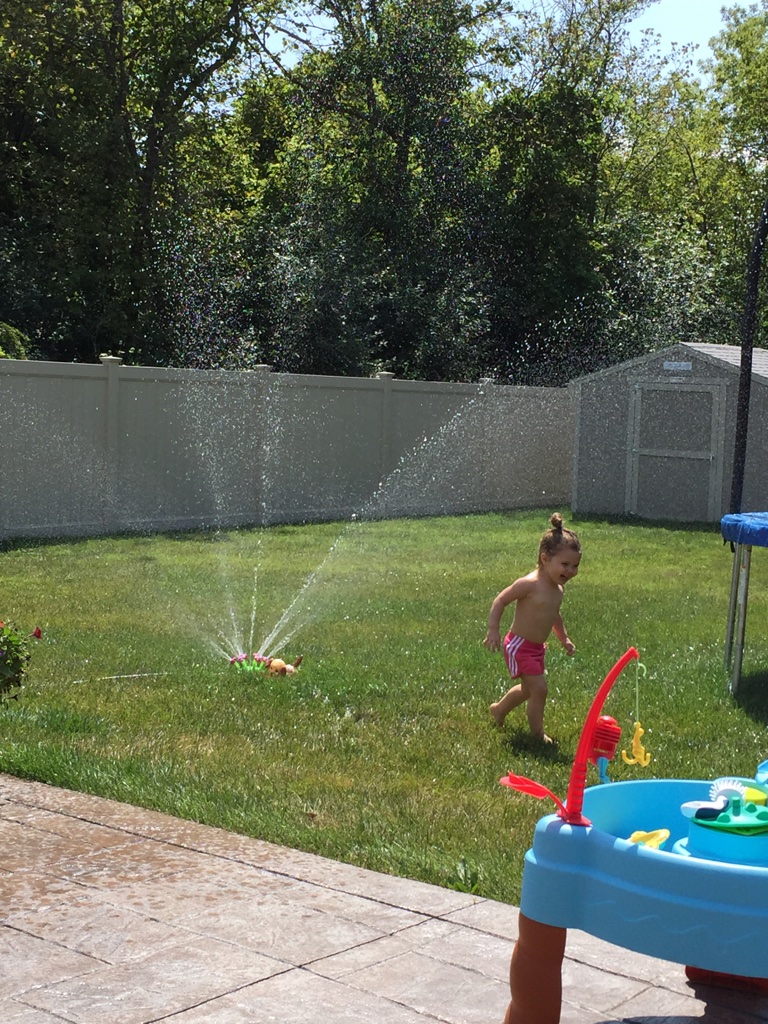 We went inside and regrouped, I got her to put on some panties, and we played in the basement for a bit. I believe she did finally go on the potty once or twice, but she also peed in her tower, at her little table, and ON OUR CLOSET FLOOR! #andshelaughedeverytime 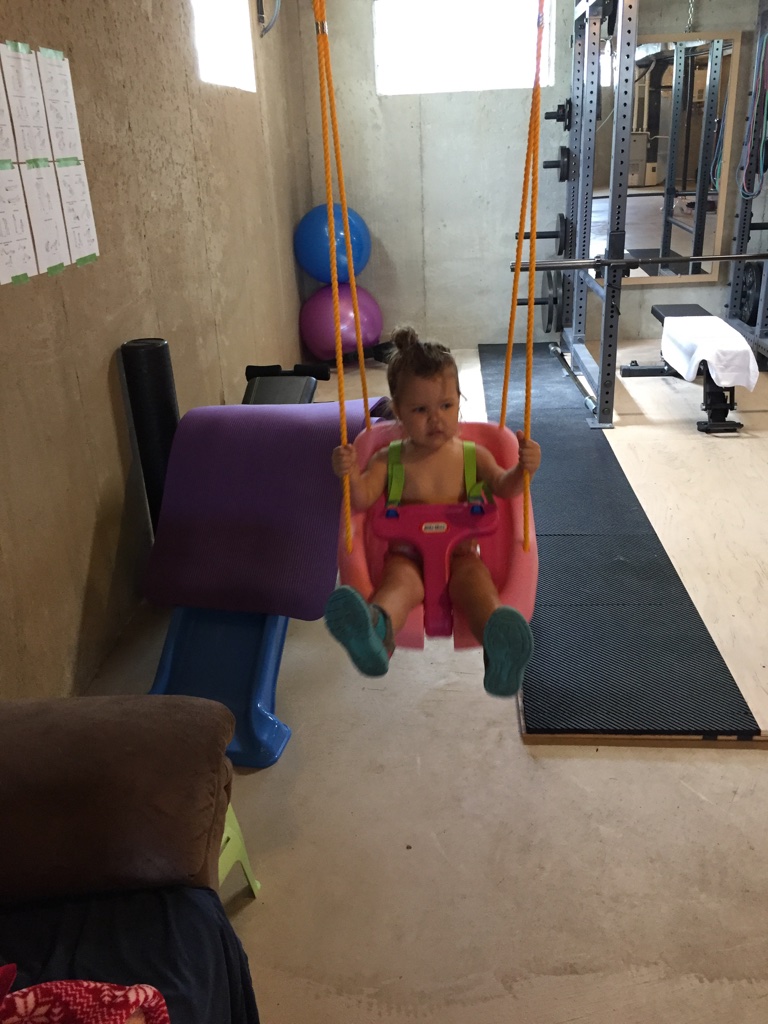 Look at all the tomatoes I picked! 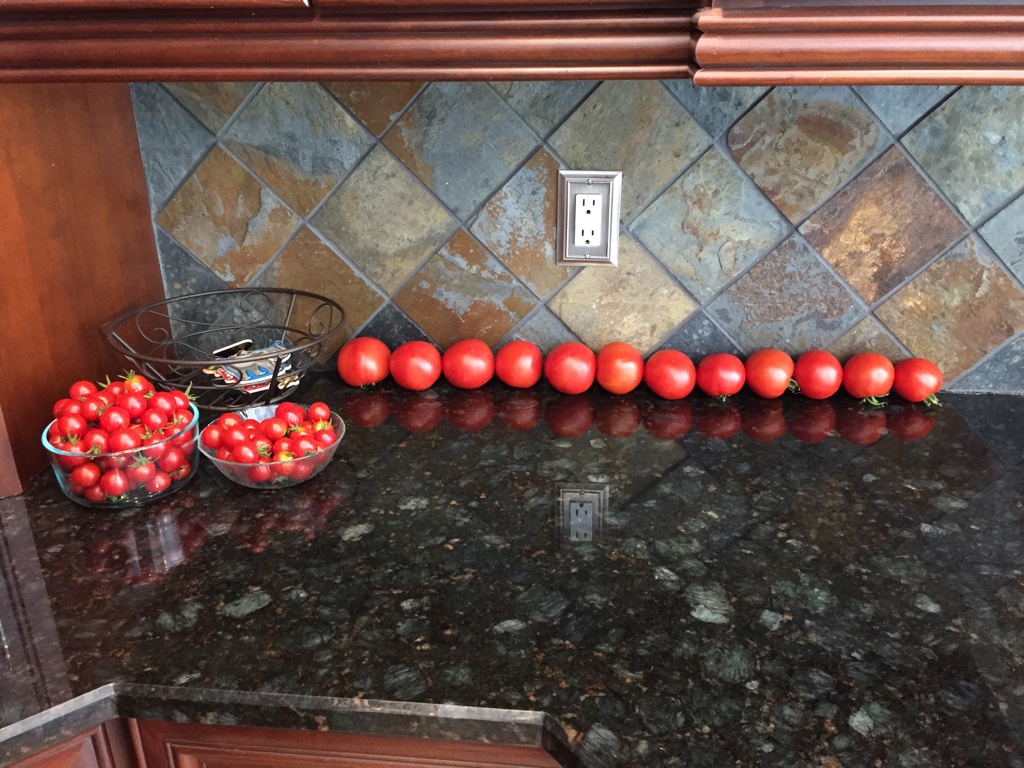 We ordered in pizza and had a picnic on the floor. At one point she asked if she could eat her pizza on the potty. Maybe I should have said yes, but I had to draw the line somewhere. I’m a firm believer in separation of food and potty. 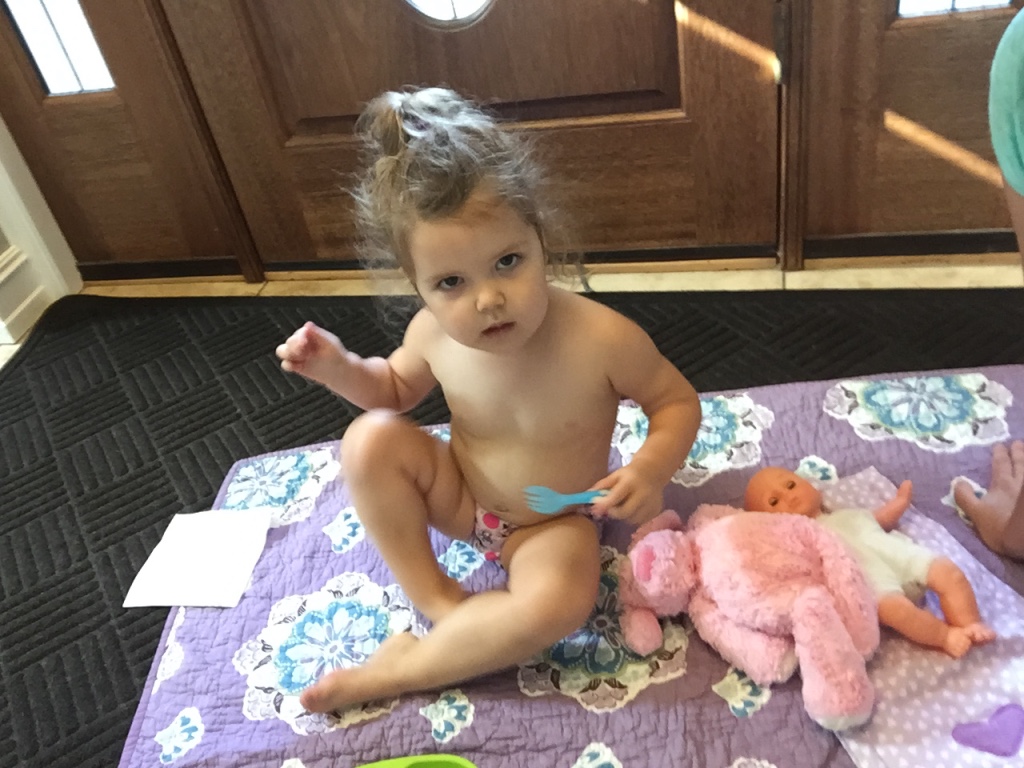 This was Lucy five minutes after I put her to bed on Saturday. Potty training is exhausting! 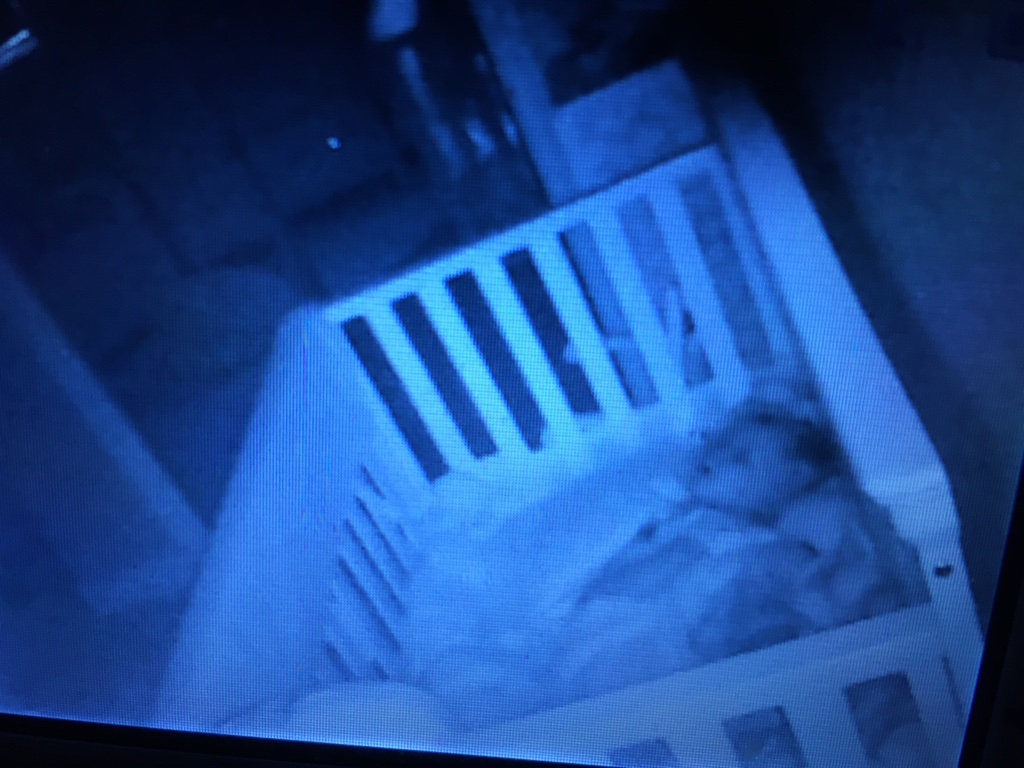 On Sunday morning, I had a super hard time getting Lucy out of her crib. Probably because she knew her diaper was going to come off. I eventually got her to take it off herself, but she wasn’t happy about it. And she refused to sit on the potty. I tried everything I could think of . . . stickers . . . candy . . . Kindle . . . nothing. 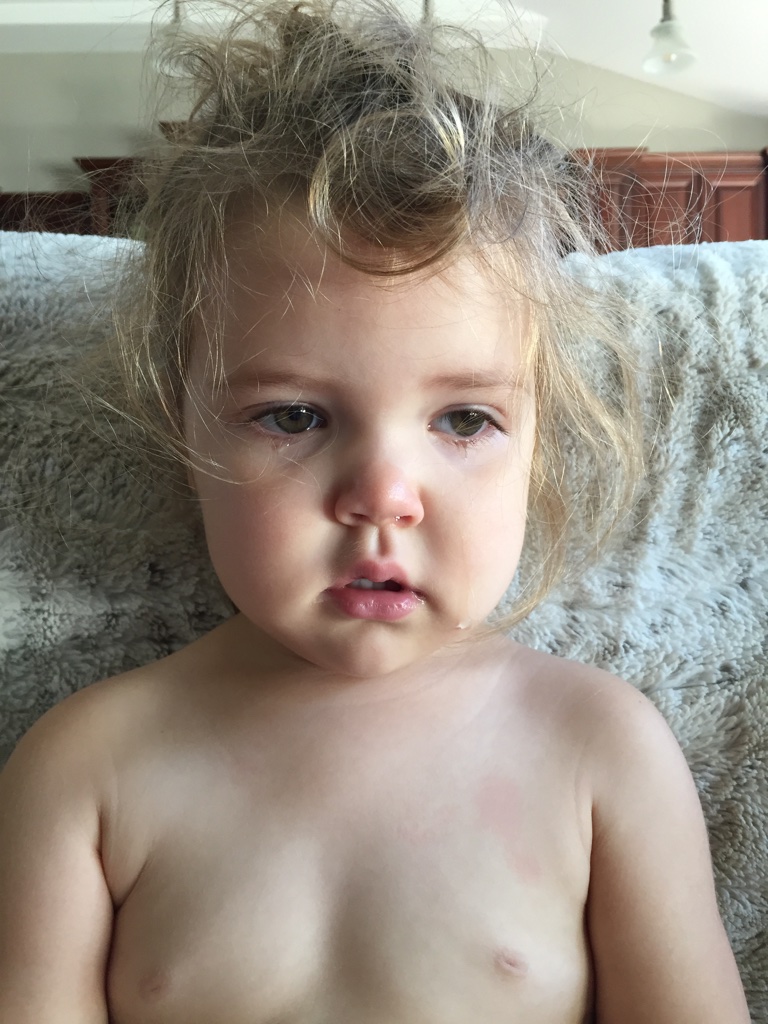 And what was Matty doing during all this craziness? . . . golfing! Here’s his team. They came in 2nd place out of 19 teams. 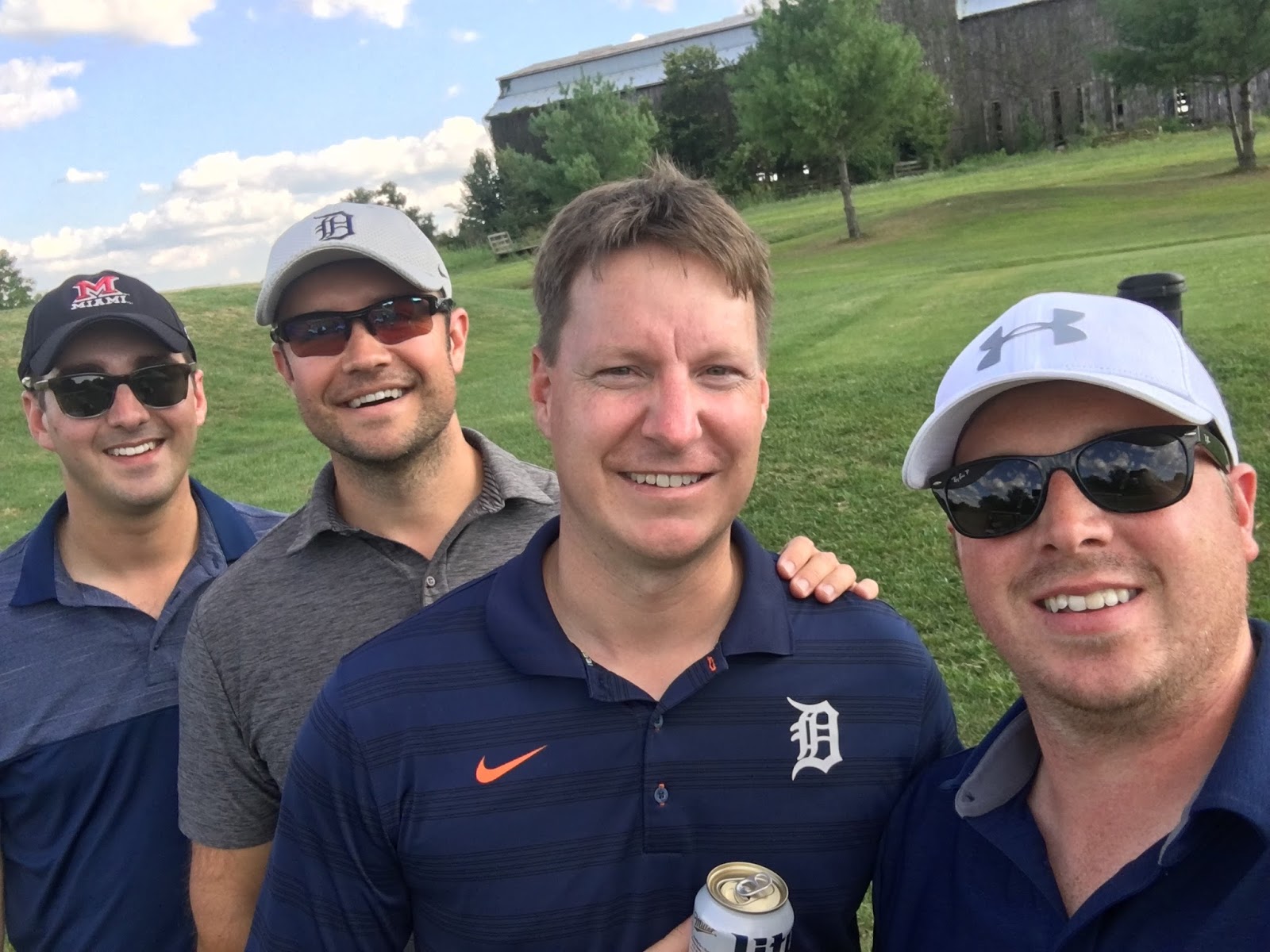 And he got this super professional certificate to prove it! It’s also worth mentioning that he won a $25 Visa gift card too . . . which he gave to me. #besthusbandever 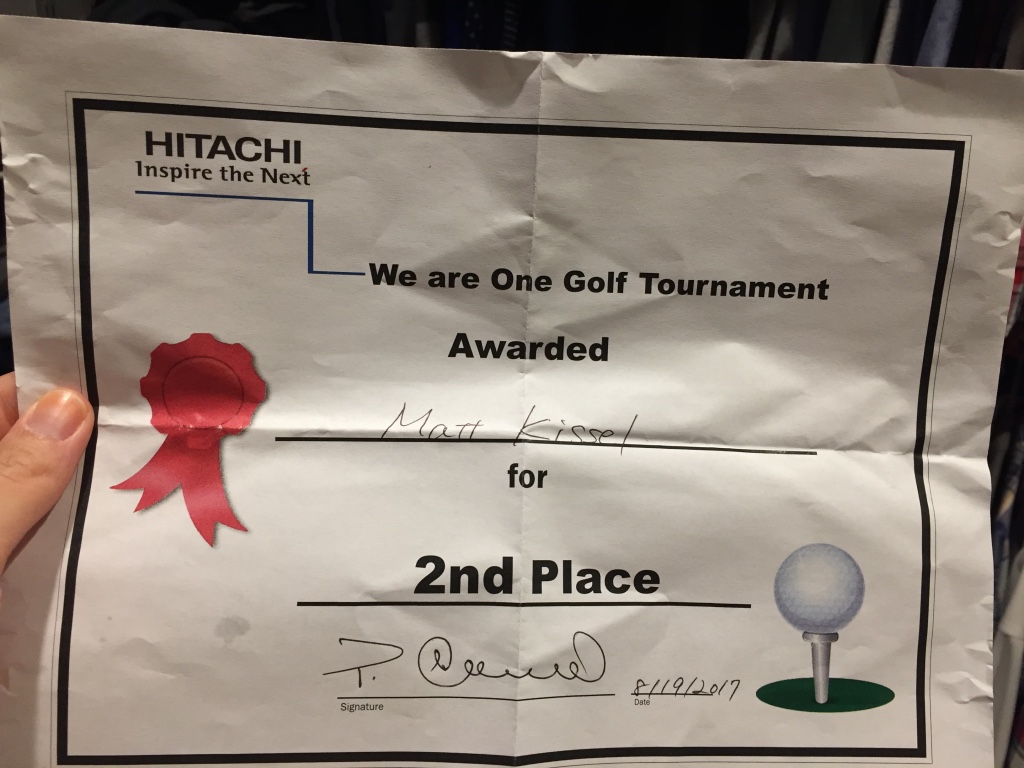 And I guess I’ll be using that $25 gift card to buy Lucy some diapers, because I officially declared potty training a fail late Sunday morning. When I was trying to coax Lucy onto the potty, I said that maybe she just wasn’t ready and that we should put her back in baby diapers (assuming she’d disagree with me), but her little face lit up and she said “yes, mommy! I love diapers!” Good Lord!
So I put a diaper on her, and felt free as a bird because we were finally able to leave the house. We walked to the park, and look how happy she was! Grandma Ri brought Emily home after lunch. Lucy decided that, like potty training, napping was not high on her list . . . so she hung out with Grandma Ri for a bit instead. 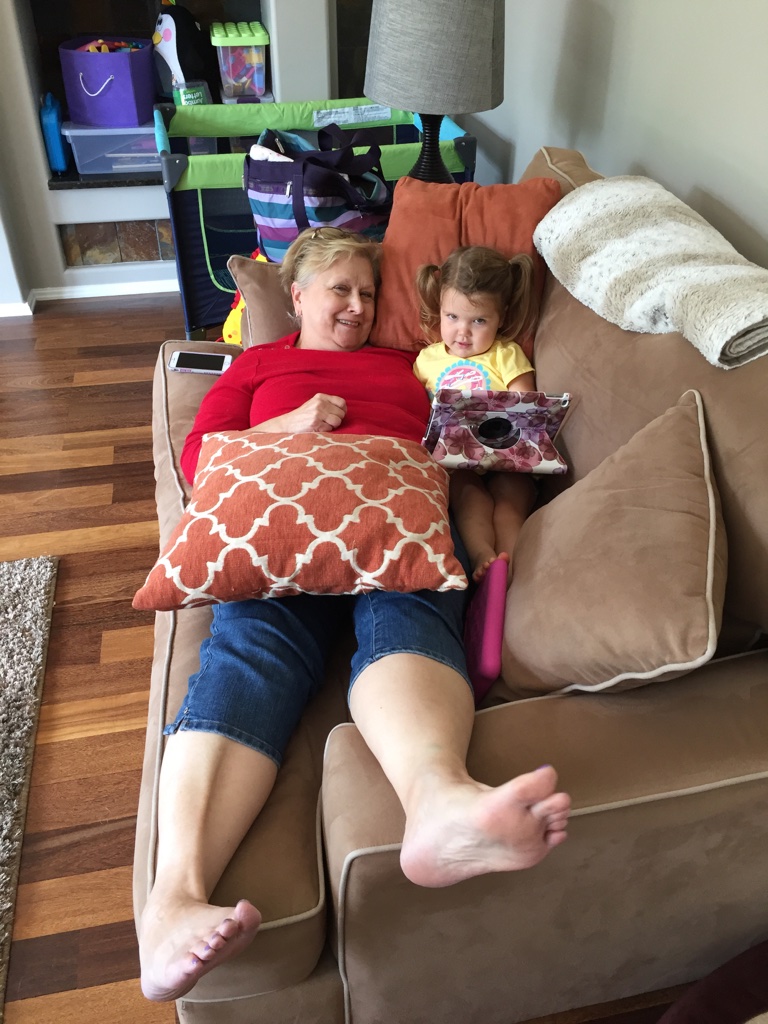 Before the last few pics, here are my thoughts on potty training:
1. It’s disgusting. I felt like our entire house was covered in pee and poop!
2. It created the ultimate power struggle situation, which is not a good thing.
3. I’m embarrassed and disappointed that it didn’t work out.
4. Lucy is even more stubborn than I thought.
5. I don’t know why I thought doing it by myself was a good idea. It would have been way more helpful to have Matty here to tag in and give me a break. And to clean up the accidents!
6. I’ve been second guessing myself all day, wondering if I should have stuck with it and maybe it would have clicked. But what am I supposed to do when she refuses to sit on the potty?! She’s got to WANT to do it, right?
I guess we will try again in a few months . . . or maybe one day Lucy will wake up and tell us she’s ready to go on the potty like a big girl and then do it without a single accident. A mama can dream!
I propped Emily up on her chair for a picture, and she tipped over. She didn’t seem to mind! She does NOT look like a 4 month old baby, am I right?! 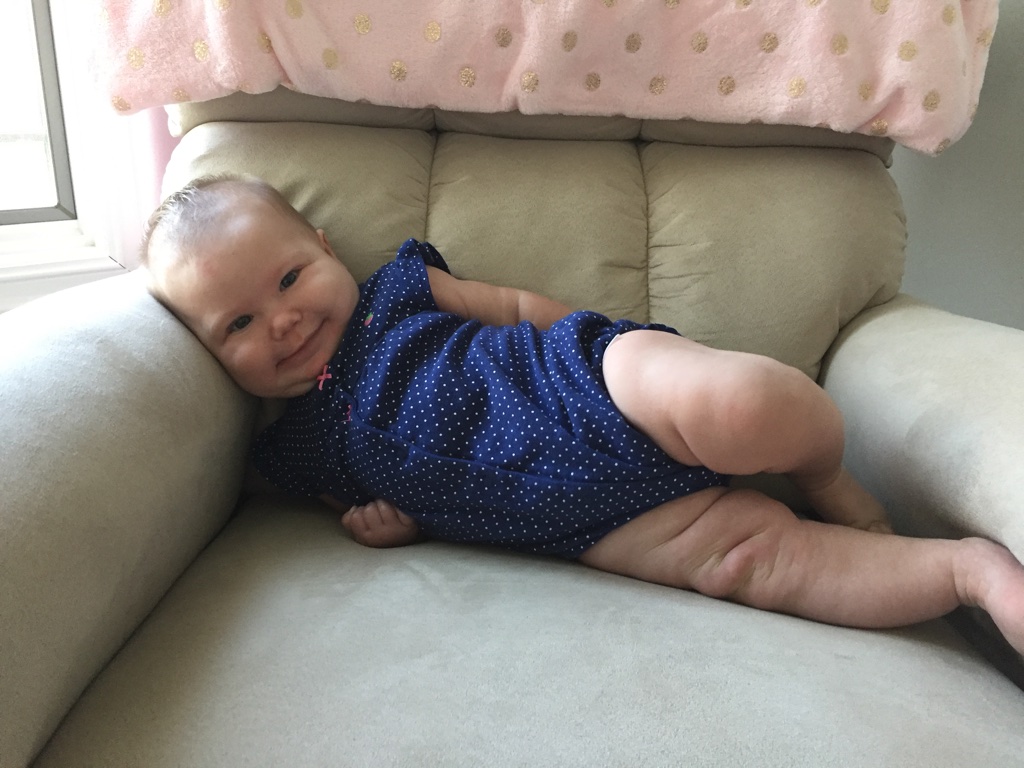 I like this picture because I caught Matty sleeping in the background. Golf trips are tiring work! 😉 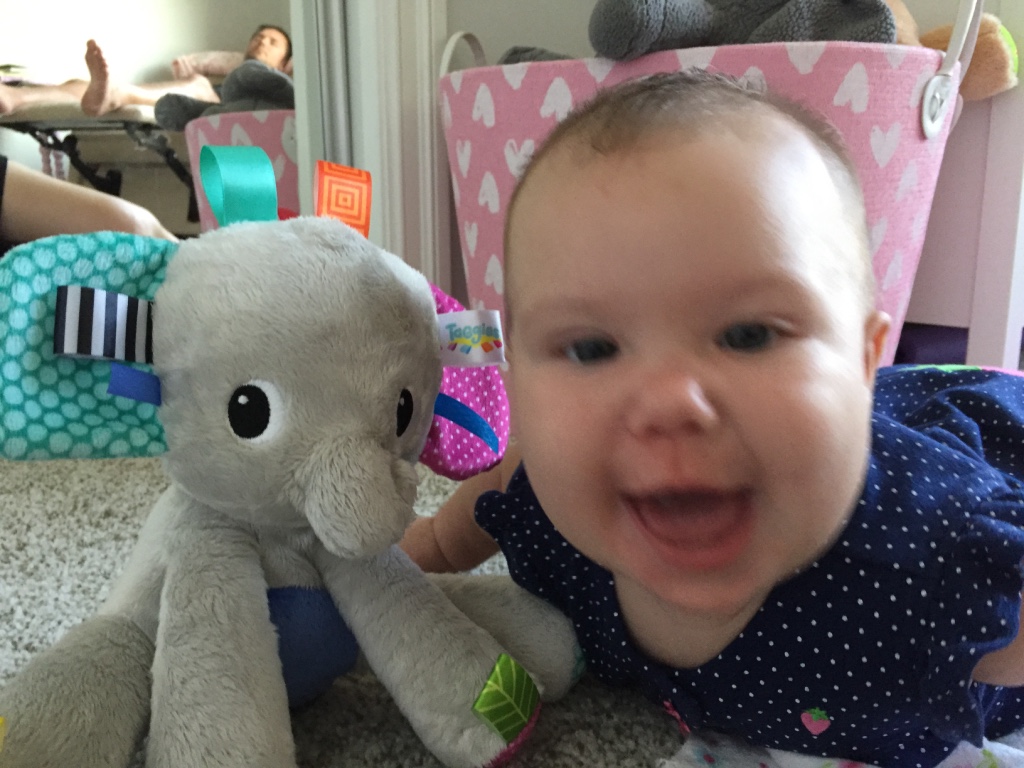 And finally, Lucy and I went to Holiday Market to get some groceries on Sunday. This older man who works there came up to me and said that Lucy looked exactly like Drew Barrymore as a child. Then he called another worker over and asked his opinion, and he agreed as well. So I came home and googled it, and there certainly is a bit of a resemblance! 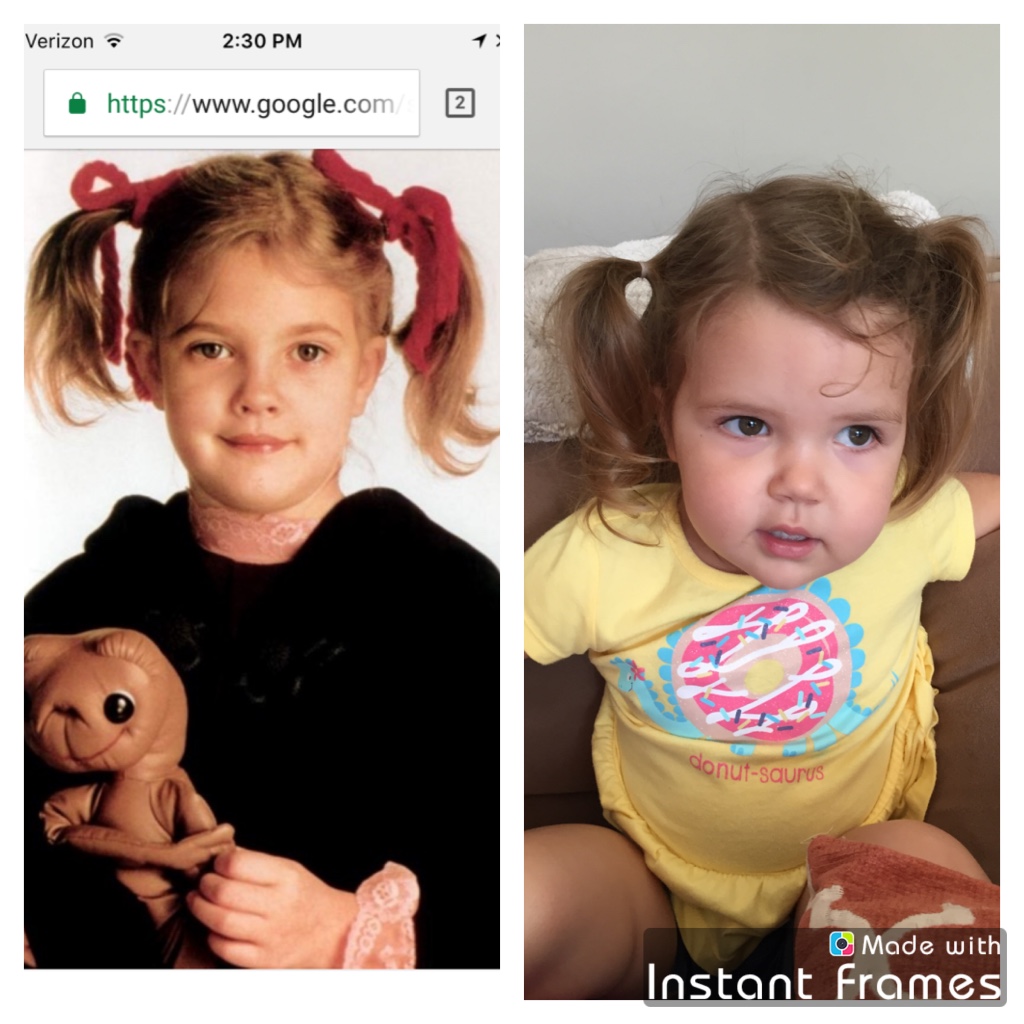 So there you have it. I’m disappointed because if I hadn’t decided to try potty training, Lucy and I could have had a really fun weekend just the two of us. You win some, you lose some. ugh! Oh, and I should also mention that Lucy has a pretty bad cold, which I’m sure affected her behavior as well. The poor thing had snot dripping out of her nose and was rubbing it all over her face all weekend. I’m hoping that both she and Emily make a full recovery this week because I missed going to Kindermusik and gymnastics last week.
Have a great week!
XOXO