You may remember back at Christmas time that Lucy went through a major regression of some sorts. Well, I’m sorry to say it’s happening again. She’s not napping, but thankfully still sleeping well at night. The only downside is that we have to make it through an evening of fussiness, crying, throwing, jealous cuddling, bath tantrums, and ONLY mama being allowed to put her to bed. She also climbed/fell out of her crib last week, and was in the middle of climbing out again yesterday at nap before I caught her on the monitor. Her crib used to be a safe place I could put her so she could calm down . . . not anymore! Maybe I could crawl in there and calm down for a bit. That would probably really throw Lucy for a loop! Oh, and did I mention that she took off her diaper and peed in her crib on Monday during her non-nap?? That was a real treat!
We had zero plans for Monday, so I put the girls in the stroller as soon as they both woke up and went for a two mile walk. Emmy took a good snooze for a lot of it. 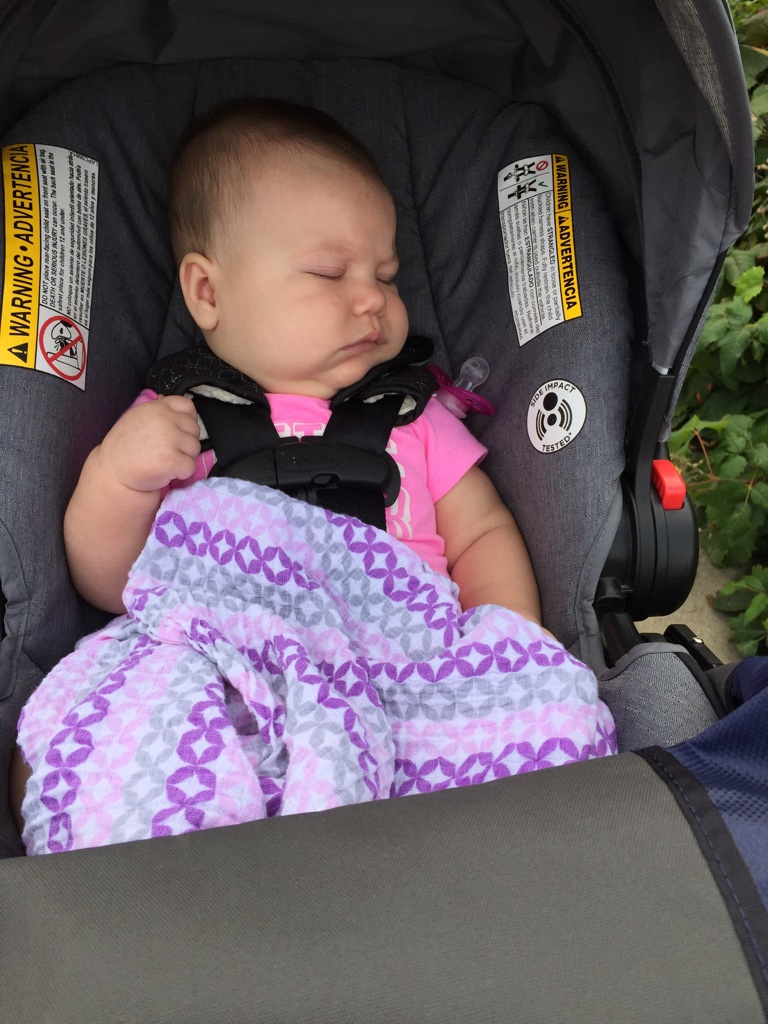 Lucy did a great job sitting in the stroller without complaining for the long walk, so we stopped at the playground before heading home. It was going to rain later in the day, so I figured I’d let her burn off some energy . . . in her monkey pj’s. 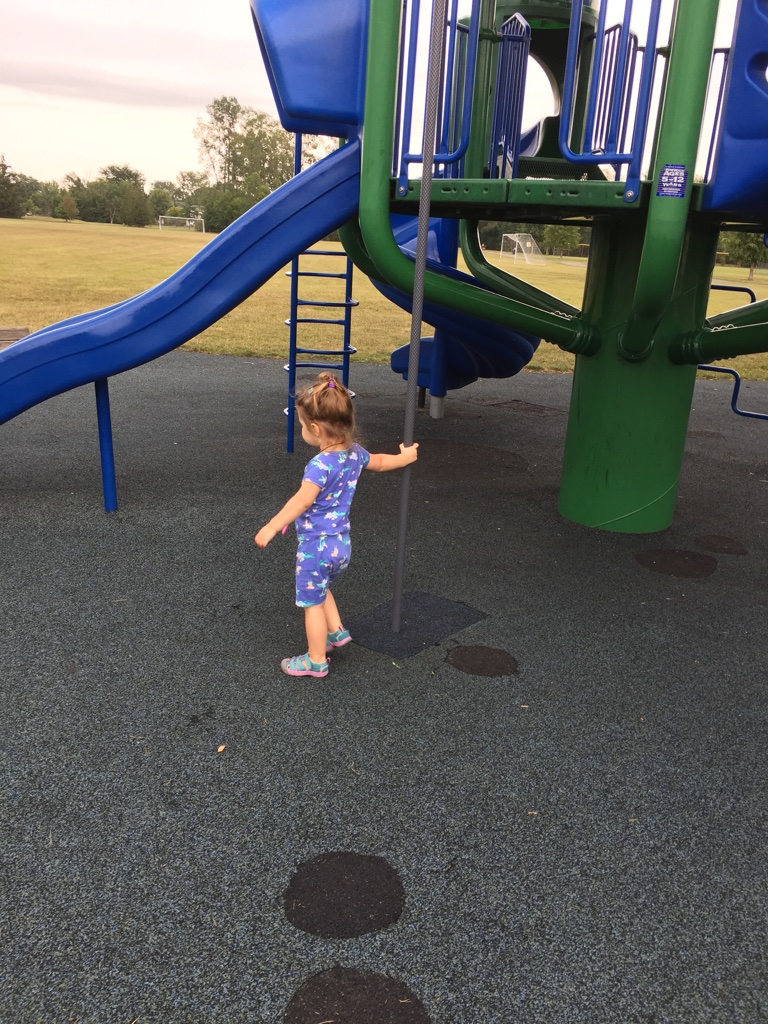 Since she was wearing her monkey jammies, she needed to eat a banana! 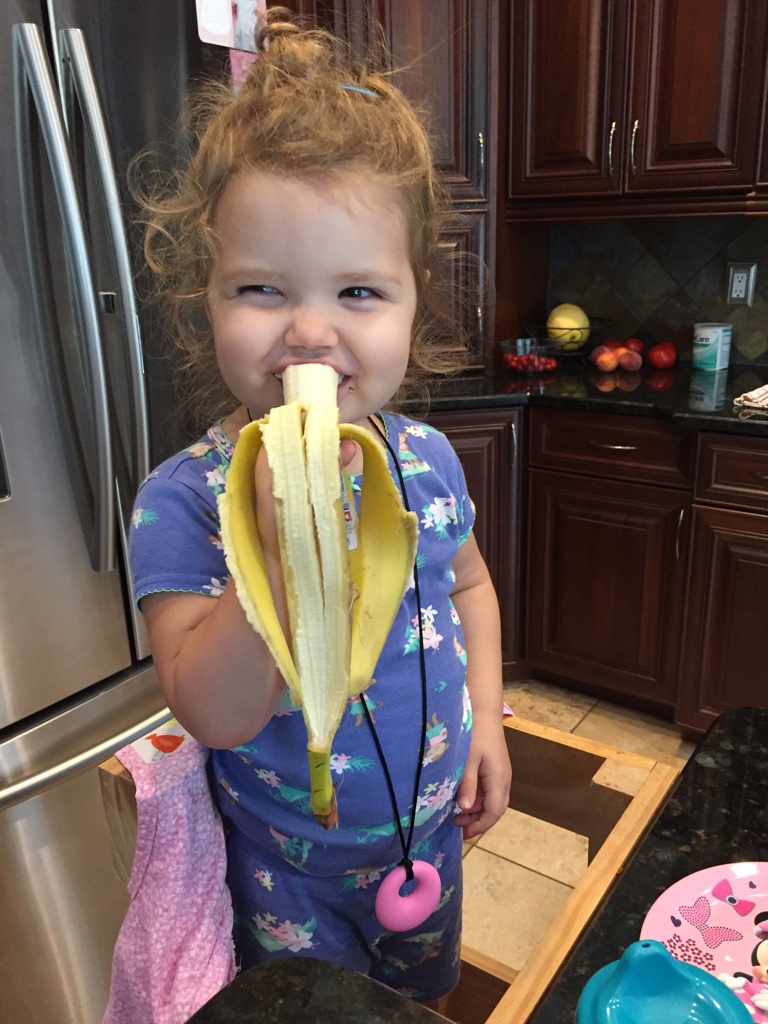 We put Emmy in this walker thingy that we had for Lucy. She liked it long enough for me to take this picture, then started crying. 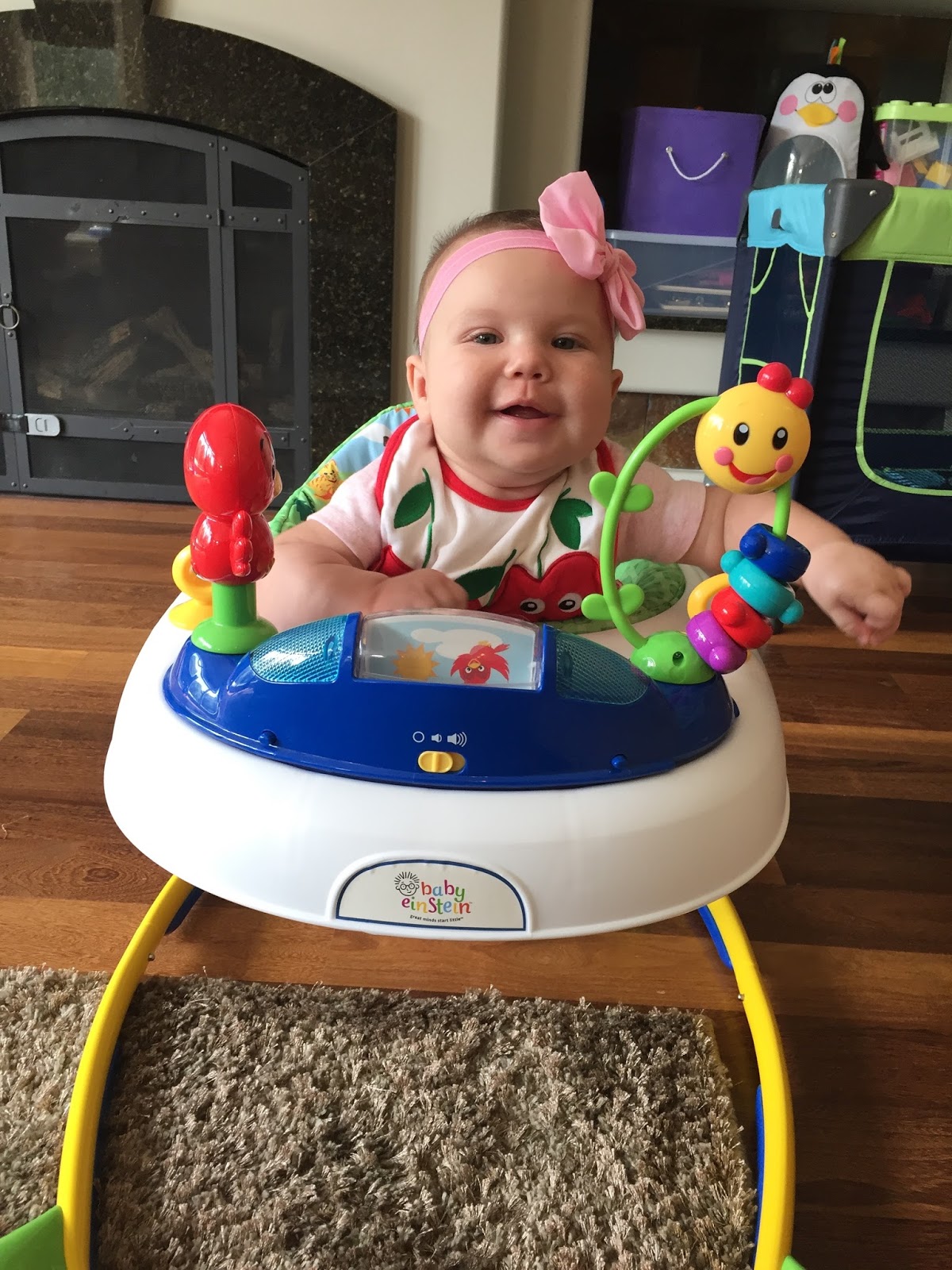 Apparently, she prefers the carrier. #armrolls 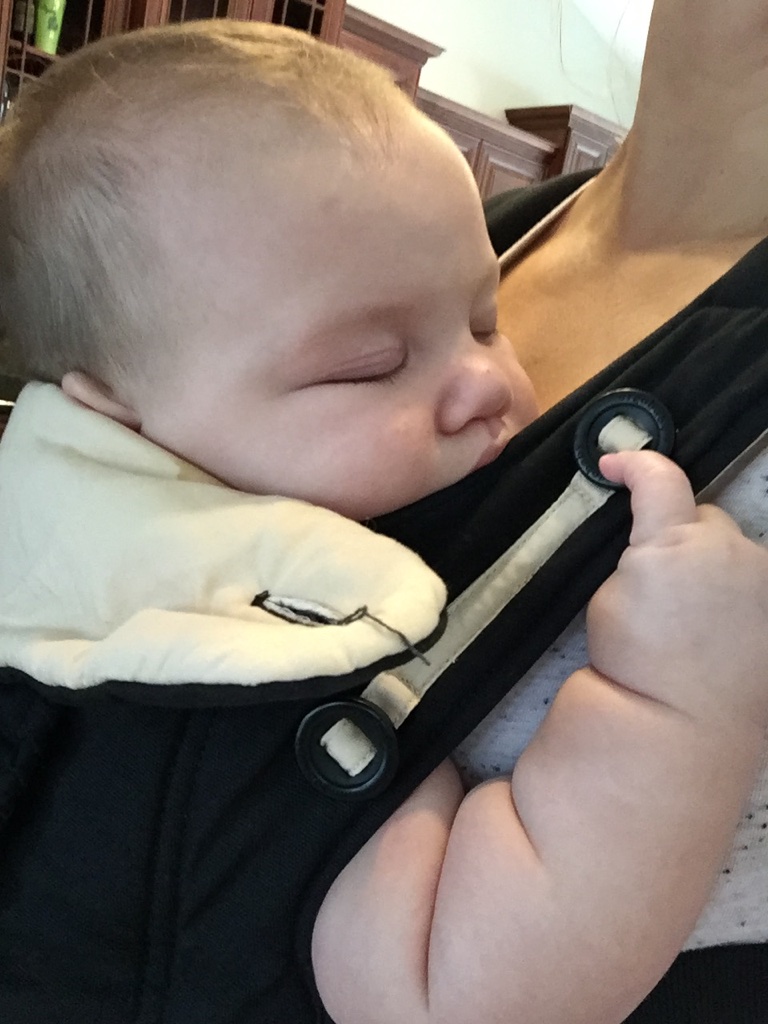 We went to Grandma Ri’s to play on Tuesday. Lucy enjoyed quite the snack! 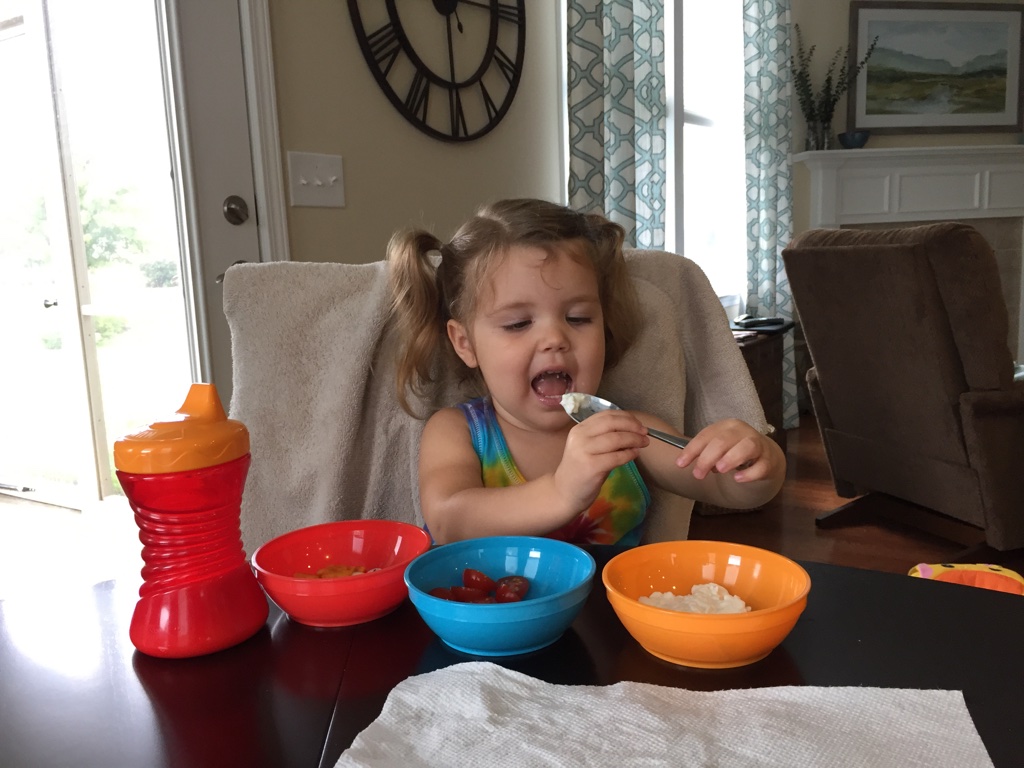 The girls were not interested in napping at Grandma Ri’s. Neither of them could hang in there for the ride home, though. 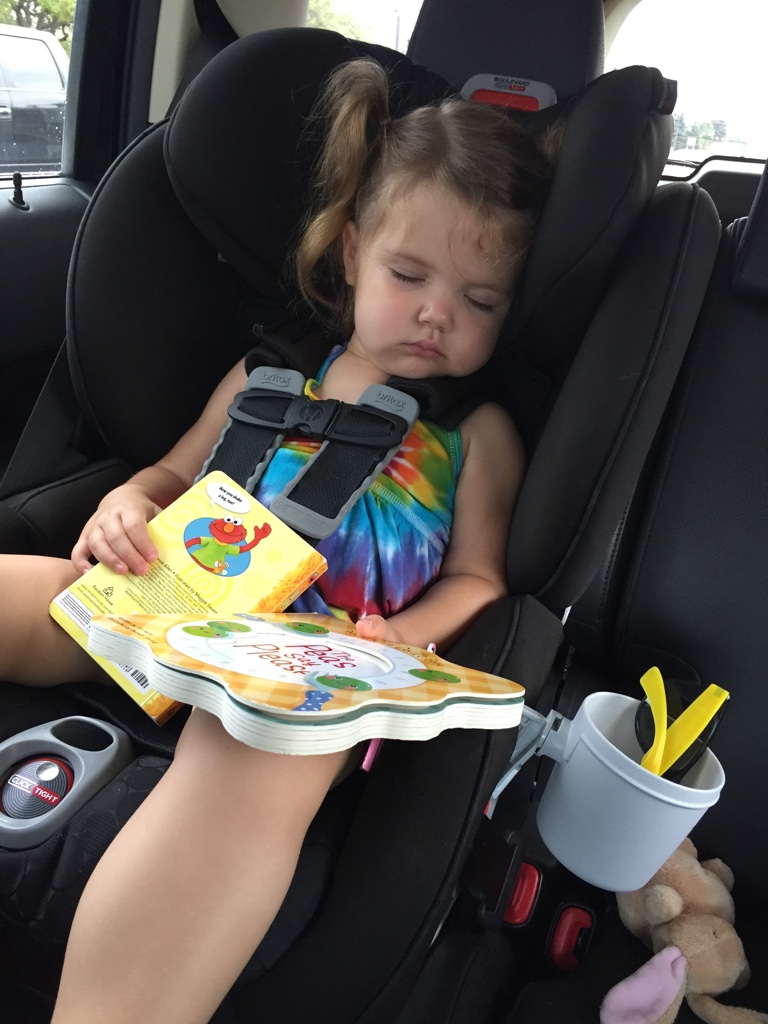 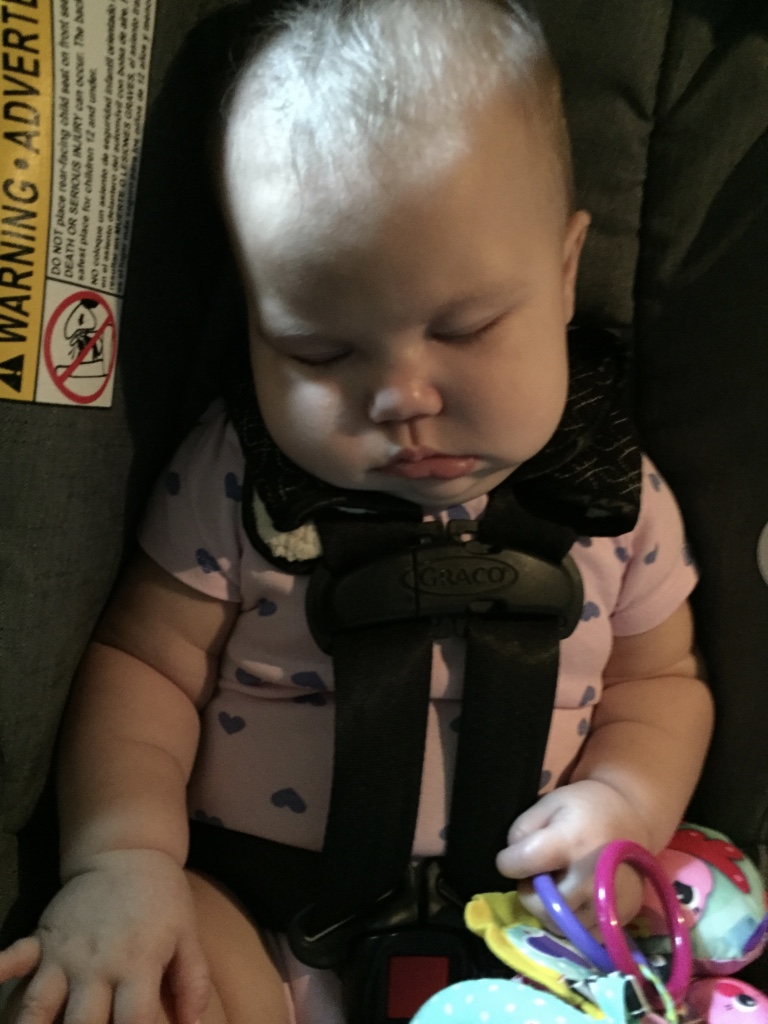 Thankfully, it was not a very hot day so I left them in the garage for a bit. Emily woke up after about 10 minutes, and Lucy lasted about 20 minutes. #illtakeit 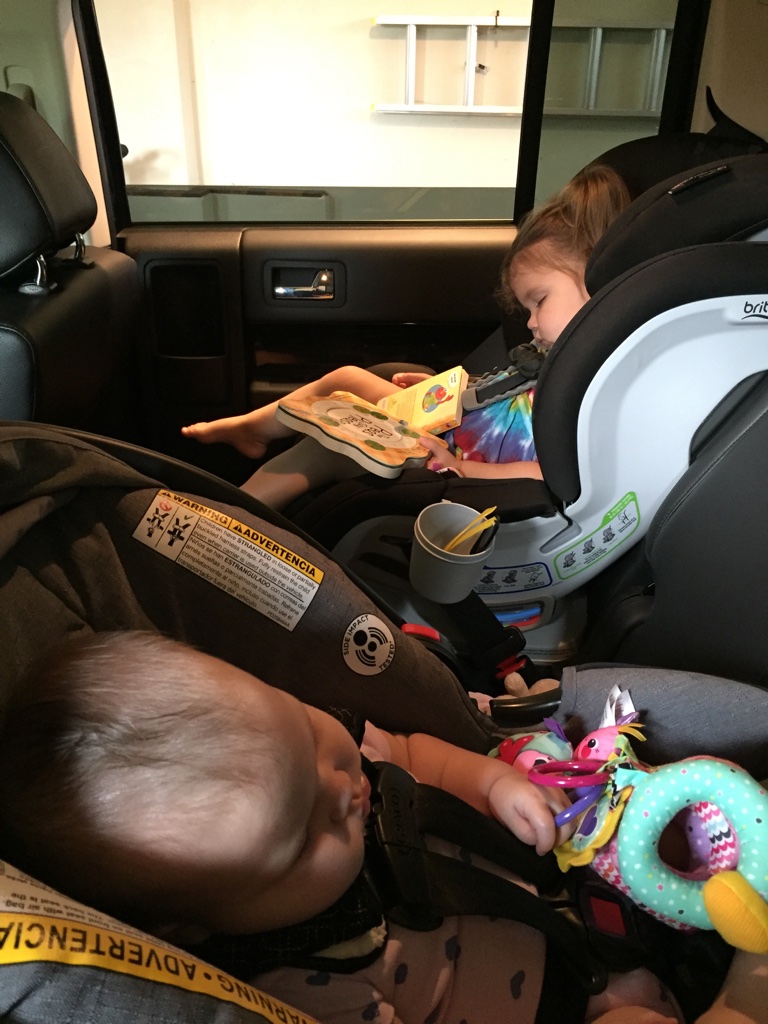 Safety glasses are required when working with daddy’s tools. Clothing, apparently, is not! 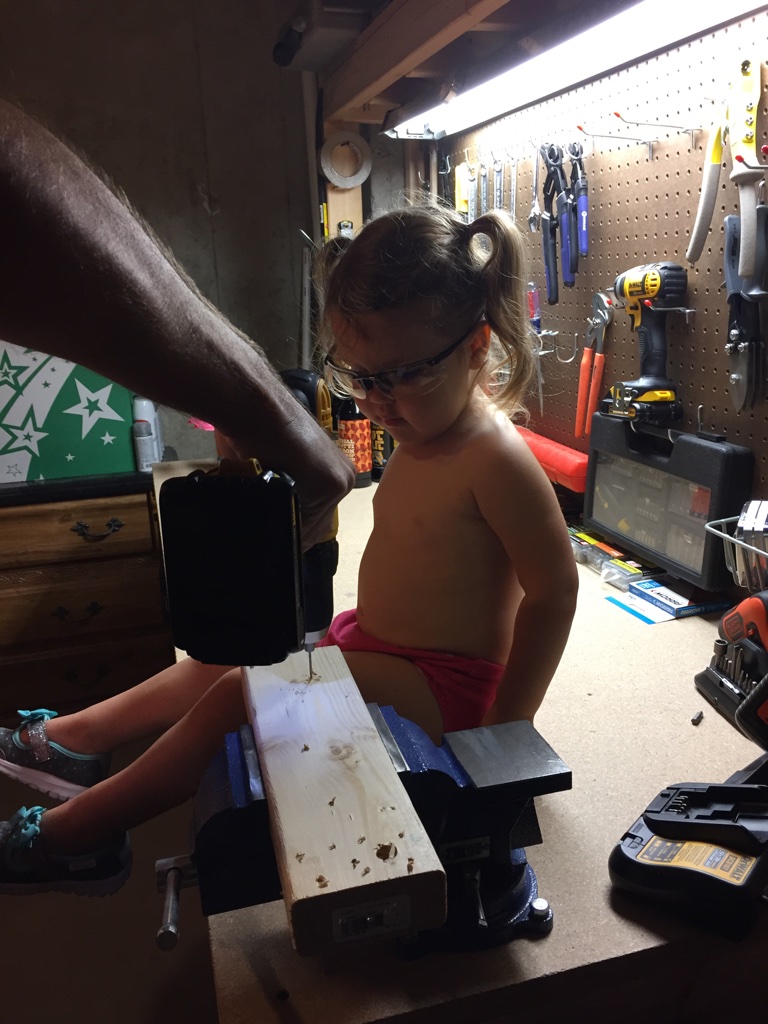 At least one of us was happy to be painting! Lucy does not understand how to use a paintbrush. She just puts her hands right in there and goes to town! 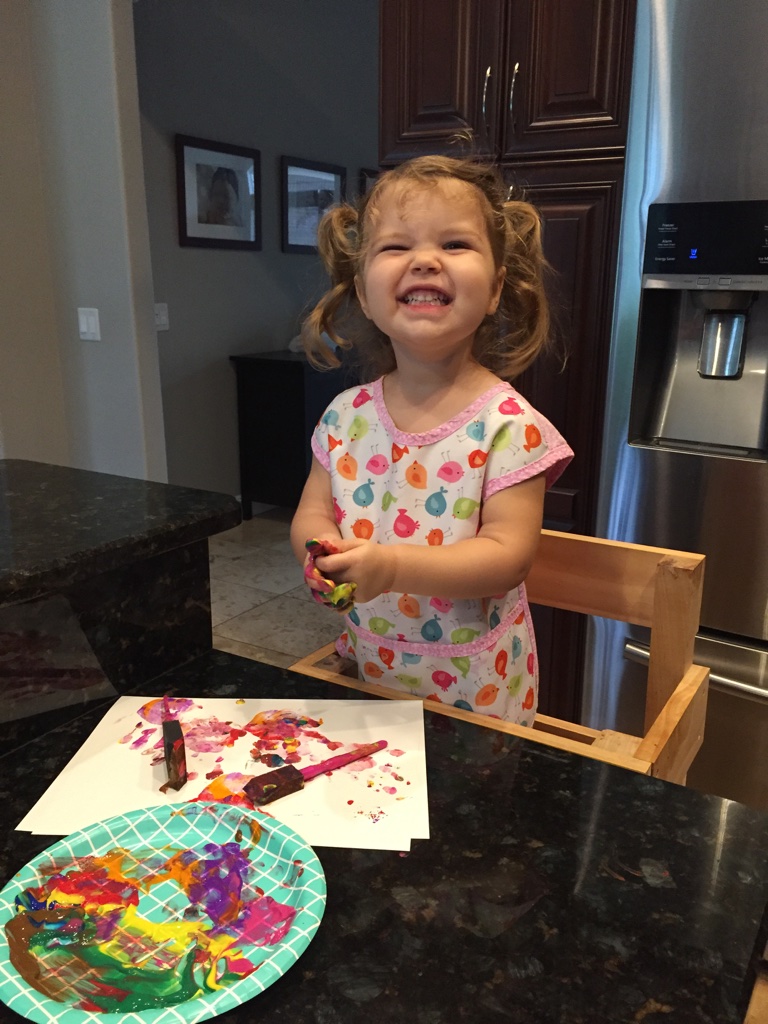 I was feeding Emily, and Lucy wanted a snack. She helped herself to a box of raisins, poured them in a bowl, and brought her water over to the ottoman so we could be together. The sunnies are just an added bonus. 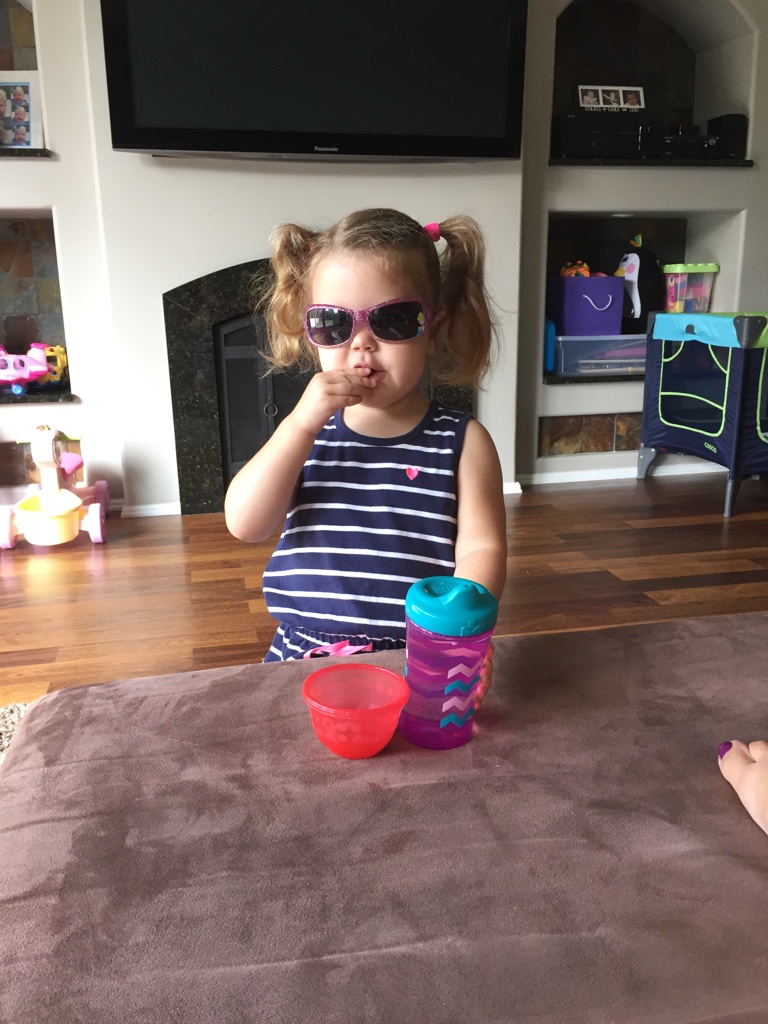 I inadvertently let Emily cry it out yesterday. I usually put Emily in her crib to watch her aquarium while I put Lucy down for a nap, and then I go and rock Em to sleep. Miss Roses was not happy about being in her crib and cried the entire time I was changing Lucy’s diaper and tucking her into her crib for her nonexistent nap. It was only about five minutes or so, but she tuckered herself out and actually fell asleep on her own! #legrolls #strawberrybooty 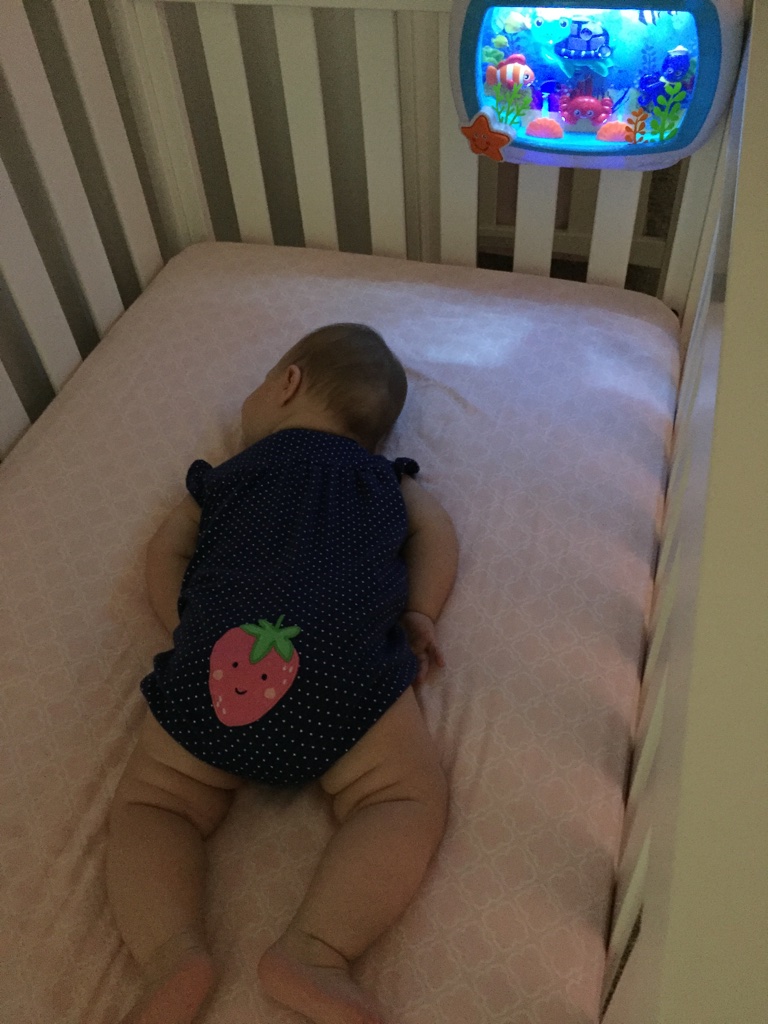 If looks could kill. She took off her diaper in her crib again and then tried to crawl out the front and the sides. Nap time is a real barrel of laughs around here lately. 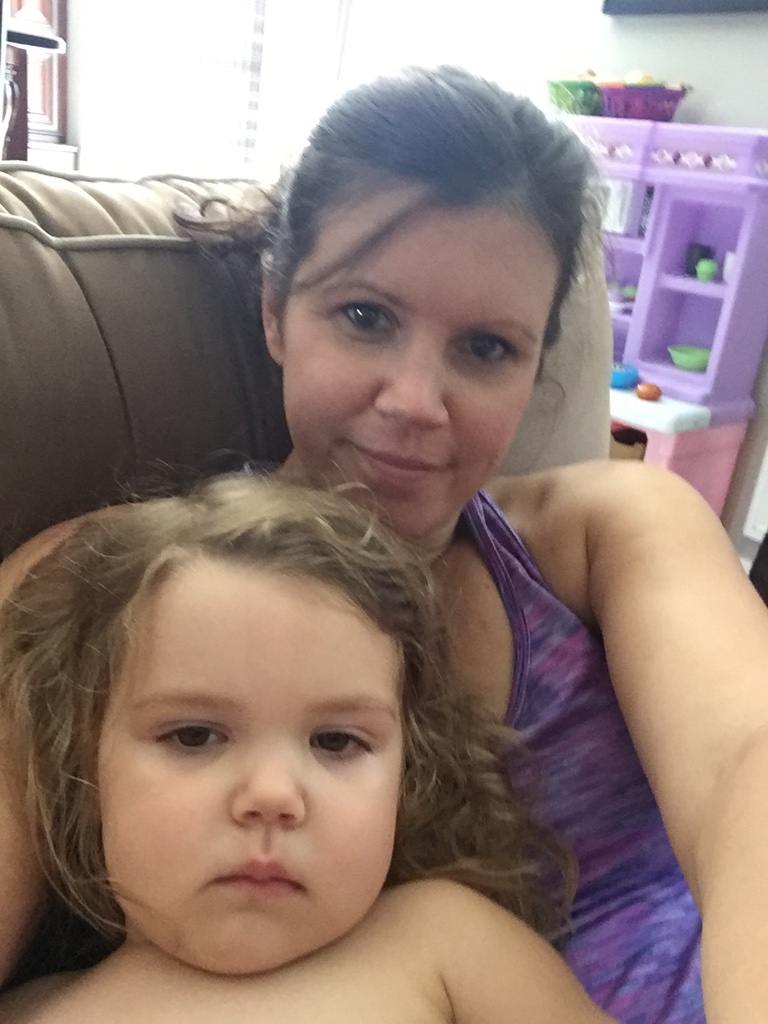 Spaghetti noodles are not only delicious, but they provide us with a lot of entertainment! 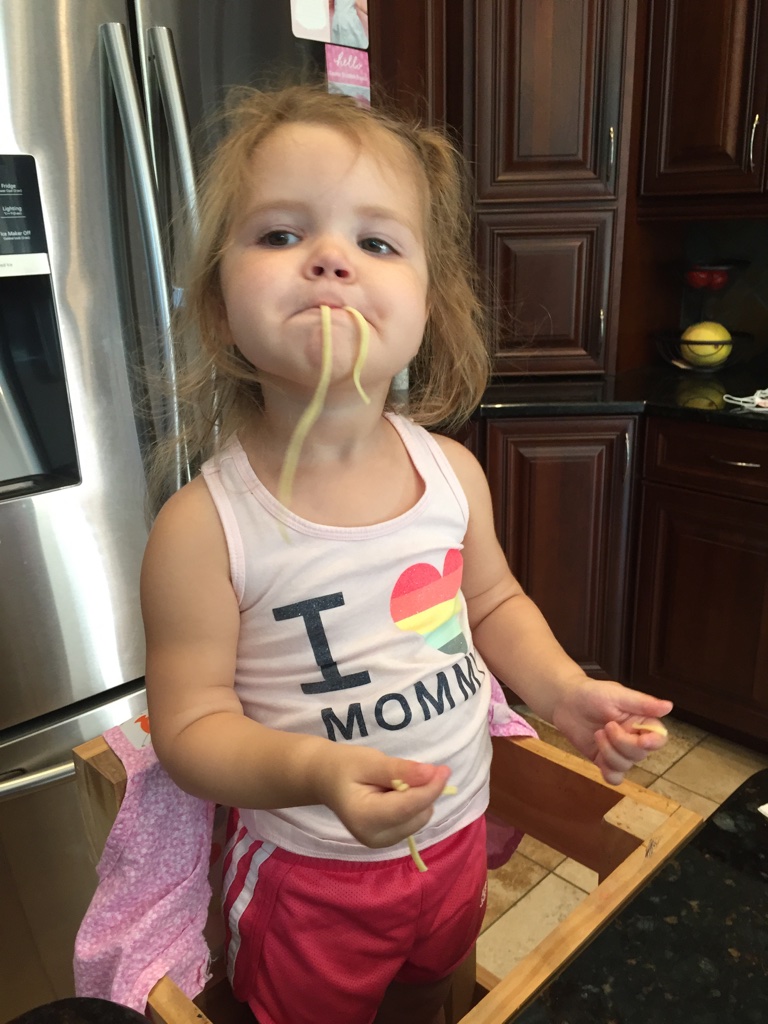 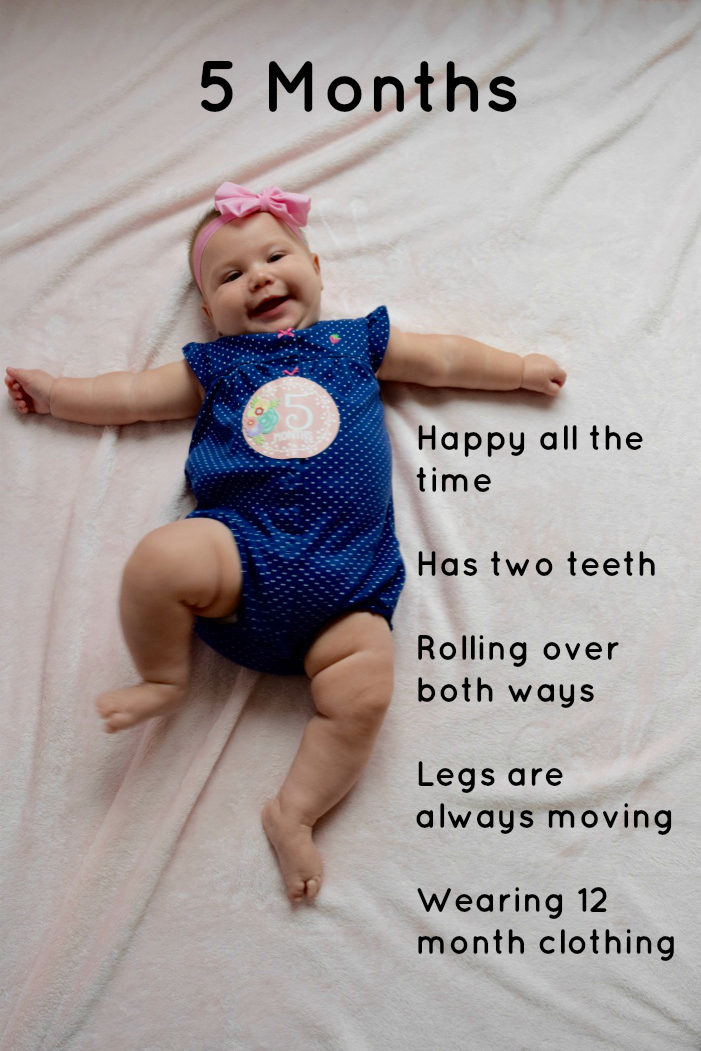 We are packing up and heading to the lake tomorrow morning. I’m really looking forward to unplugging and having a more helpful adult to child ratio. With five adults and four kiddos, it seems as though I should get a little bit of a break at some point. Here’s hoping!
Have a great last weekend of summer!!
XOXO