Or maybe a novella. I tend to go on and on . . . have you noticed?
I’ve been wanting to do this post for awhile now. It’s finally happening due to all the mushiness I feel over our new niece, Eleanor, being born. I figure it’s time to get Lucy’s (and Emmy’s!) birth story on the blog so it can live on in Internet infamy. Hopefully.
My mom had Emily Roses for TWO nights in a row (What?! Hello, well-rested Molly!), and I tend to jump right back into blogging mode when I have my littlest love gone (but not forgotten!).  So, here we GO!
I’ve already mentioned several times how much we struggled, and struggled, and then struggled a lot more to get pregnant with Lucy. I have no issue openly discussing our infertility journey because once I started sharing it with people, it turns out that there are way more people out there who experienced infertility too. It made me feel “better” in a way because I didn’t feel so alone.
So once we finally got (and stayed) pregnant, Lucy’s pregnancy was super easy on me. Not a lick of morning sickness, I worked out, walked the dogs, and nested like nobody’s business. Her original due date was June 3 (I think! See, this is why I should have done this sooner!), but we ended up scheduling a C-Section for Friday, June 5. I had a check up on Tuesday, May 12 and told the doctor that I had been experiencing a lot of pain/discomfort near my ribcage. She did a quick ultrasound and determined that Lucy was breech, so we had to schedule a C-Section. I was tickled pink about this because the thought of labor and delivery terrified me. We were so focused on getting a baby IN there that I never really stopped to think about the fact that I had to get it OUT! HAHA
So two days after that doctor appointment (Thursday, May 14), Matty had a work outing to the Tigers game, and I had a dentist appointment. I woke up and felt super tired. My appointment was early, and Matty asked me what I was going to do all day, and I remember saying I needed a nap. At one point, my friend Bridget texted me to say that an ice cream place down by where we grew up was giving away free ice cream if your name was Molly! Now, those of you who know me well are probably thinking that I got my 8 months pregnant booty up off the couch and went for the ice cream. Nope! I told her I was TOO TIRED! That should have been my first clue that something was going on.
Matty got home from the Tigers game, and we relaxed for a bit and then went to bed. I woke up around 3am to use the bathroom. I crawled back into bed and less than five minutes later there were some trickles of something running down my legs! (TMI? sorry!) Luckily, since I had literally just used the bathroom I knew that I wasn’t just a pregnant lady losing control of her bladder. I shook Matty and told him that I thought my water just broke. He said, “No it didn’t” and then rolled over and went back to sleep. We both still laugh about this. I stood up just to be sure and, yep, my water had definitely broke. I woke up a very confused Matty and we called the doctor.
I was a little nervous while waiting for the doctor to call back, so I wandered into the kitchen and had a handful of chocolate teddy grahams. Because when I’m nervous, I eat! So the doc called back and said come on in and get checked out. I wasn’t having contractions or anything so we decided to take our time and shower first (oh, and pack our bags cuz we hadn’t done that yet!) We got to the hospital around 5:30, and they confirmed that my water had, in fact, broken. Since we were already scheduled for a C-Section, they said they’d just go ahead and do it now. Our minds were pretty much blown because, rookies that we were, we never really entertained the idea that Lu would come early . . . let alone three weeks early! 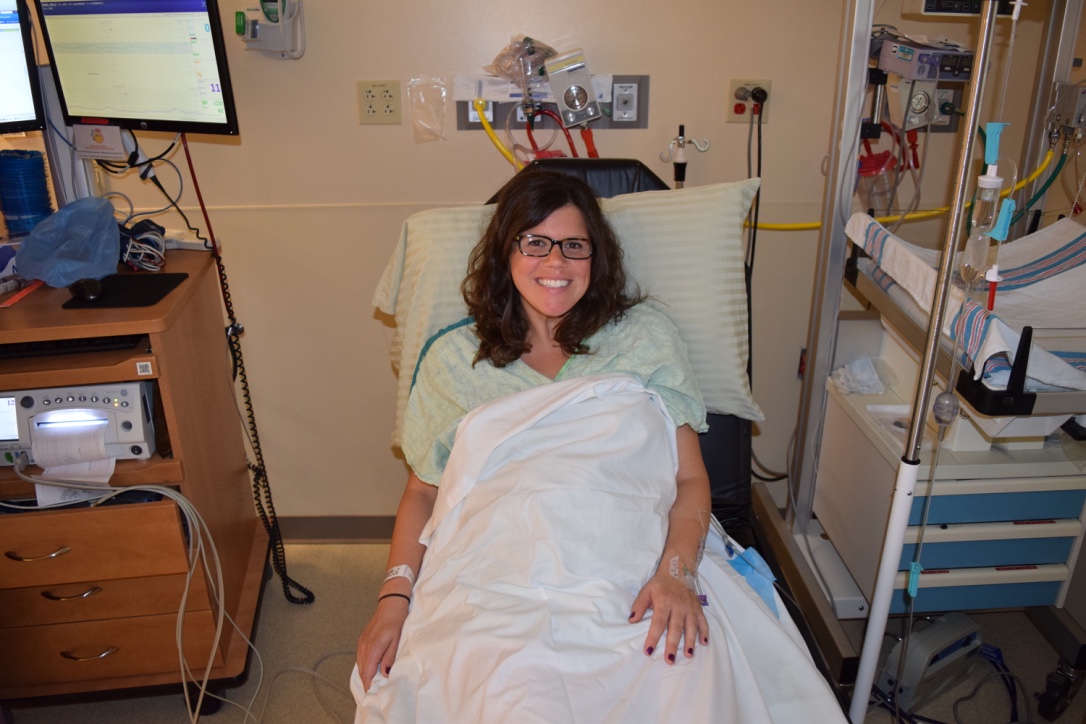 So as they are prepping me for surgery, someone asked if I’d eaten anything. STUPID me mentioned that handful of chocolate teddy grahams. (Insert the sound of car brakes screeching to a halt). Apparently, they won’t do the surgery if you’ve eaten recently, even if it is ONLY A HANDFUL OF CHOCOLATE TEDDY GRAHAMS! At this point, the contractions were kicking in and everyone who came to talk to me or check on me was like, “so, I hear you ate some teddy grahams.” Funny now, annoying to the contracting pregnant lady. While we were waiting, they filled out this board and asked me what my goals for delivery were. Did I say a healthy baby? Nope, they added that to what I said . . . I said that I didn’t want to throw up! haha There’s nothing worse, am I right?! 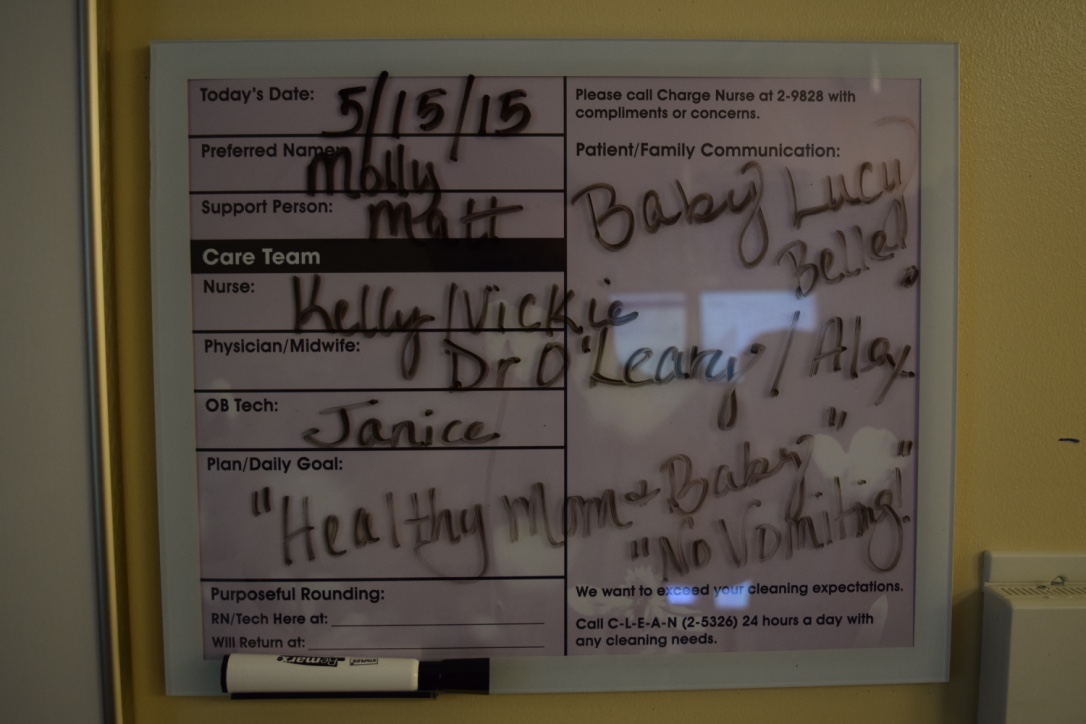 So after enough time had passed (it was really only like 3 or 4 hours, but I sat there and cursed those darn teddy grahams they entire time), they wheeled me back to the OR and it was quite the scene. There were people and instruments everywhere. Except for Matty. He wasn’t allowed in during the prep phase which was a real bummer because that’s when I was kind of scared and really needed him. The anesthesiologist (nailed that spelling on the first try) had me sit up and swing my legs over the side of the table and then he said, “Ok, give me the biggest hug you can and squeeze me really hard.” Nice to meet you too! Apparently that’s how they get you into position to administer the spinal anesthesia. I could go on and on about how weird the spinal anesthesia was, but this is getting way too long so I’ll spare you.
So they got me all prepped and ready and brought Matty in. I was shaking like a leaf at this point, and they gave me some super warm blankets which were delightful. Everyone was standing around talking, and I asked if they were going to let me know when they started, and the doctor informed me that they almost had the baby out! ha! Couldn’t feel a darn thing . . . so weird! After a few minutes we heard a little cry, and there she was . . . our little Lucy Belle! So they cleaned her up quick and brought her over to us and asked if I wanted her to lay on my chest . . . and I was all like “Nope, I’m gonna throw up!” #theregoesmygoal   Seriously, I felt awful and wanted nothing to do with the baby! So they cleaned her up more and did her measurements and gave her to Matty while they adjusted my medicine levels and got me feeling better. It felt like an eternity, but was probably only 5 minutes. Once I felt better, Matty gave me that sweet baby, and it was love at first sight! 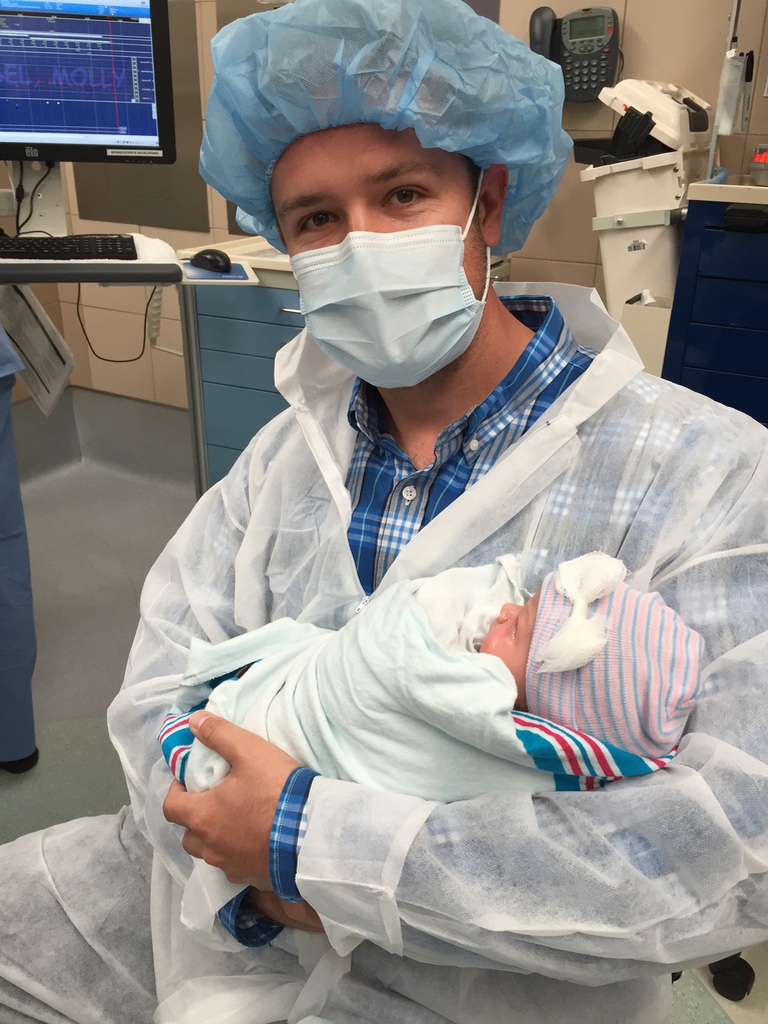 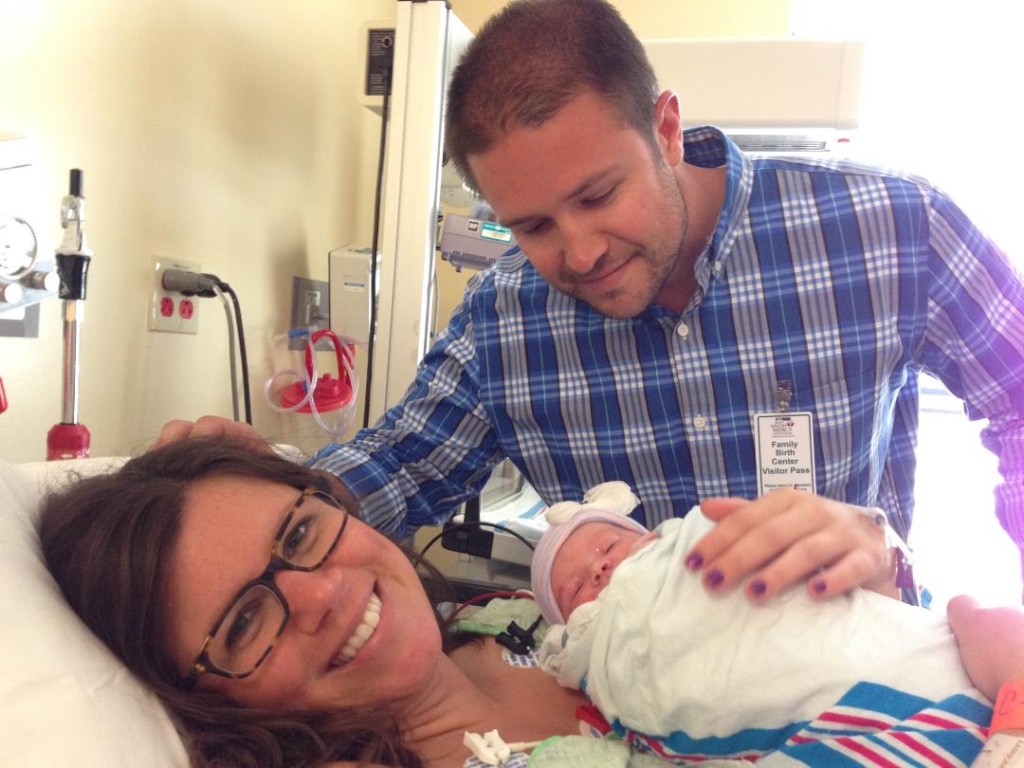 We stayed in the hospital for two nights, and we were soooo ready to get home! (I felt very differently after Emmy was born, but that’s another story for another blogfest). I dressed Lucy in her going home outfit, and it was too big! She was so tiny. She weighted 6lbs 7oz when she was born, but had dropped to 5lbs 11oz by the time we took her home. Itty bitty! 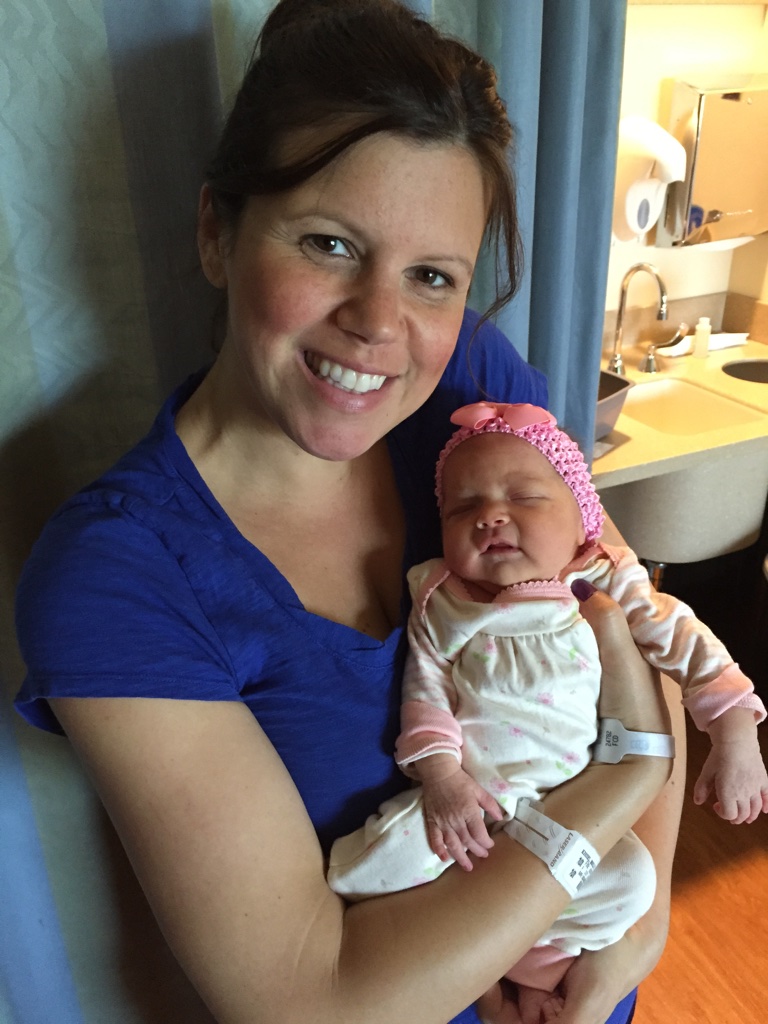 Thanks for hanging in there til the end. Sorry it was so long . . . I blame the teddy grahams! 😉
XOXO