Honestly, not a whole lot has happened since Tuesday morning’s post. We had a particularly trying day on Tuesday. Of course, Matty golfs on Tuesday nights so it was like the never ending day for me.
It got off to a good start. Emily woke up early and Lucy slept in. So I got some good morning play time and snuggles with Em and even got to rock her to sleep for her first nap of the day before Lucy woke up. 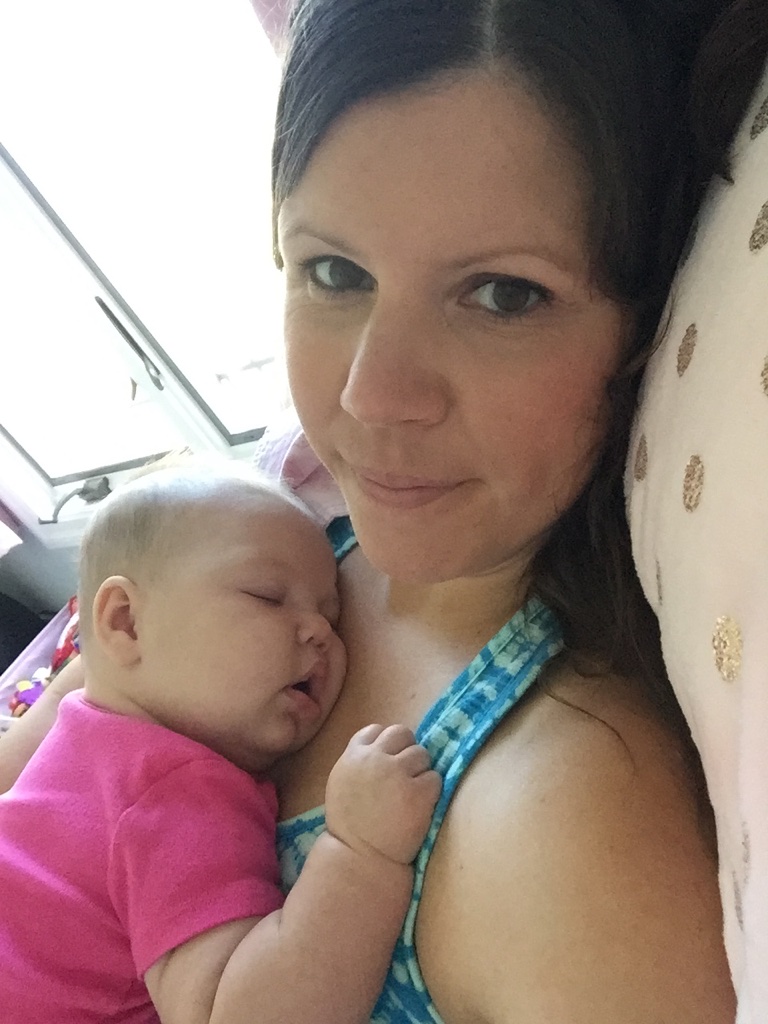 But once she was up, she was up in a big way. I thought Lu was in Emmy’s room playing with her dollies, but then I heard, “Come see me, momoo!” Never a good sign. She had crawled into Emmy’s crib! 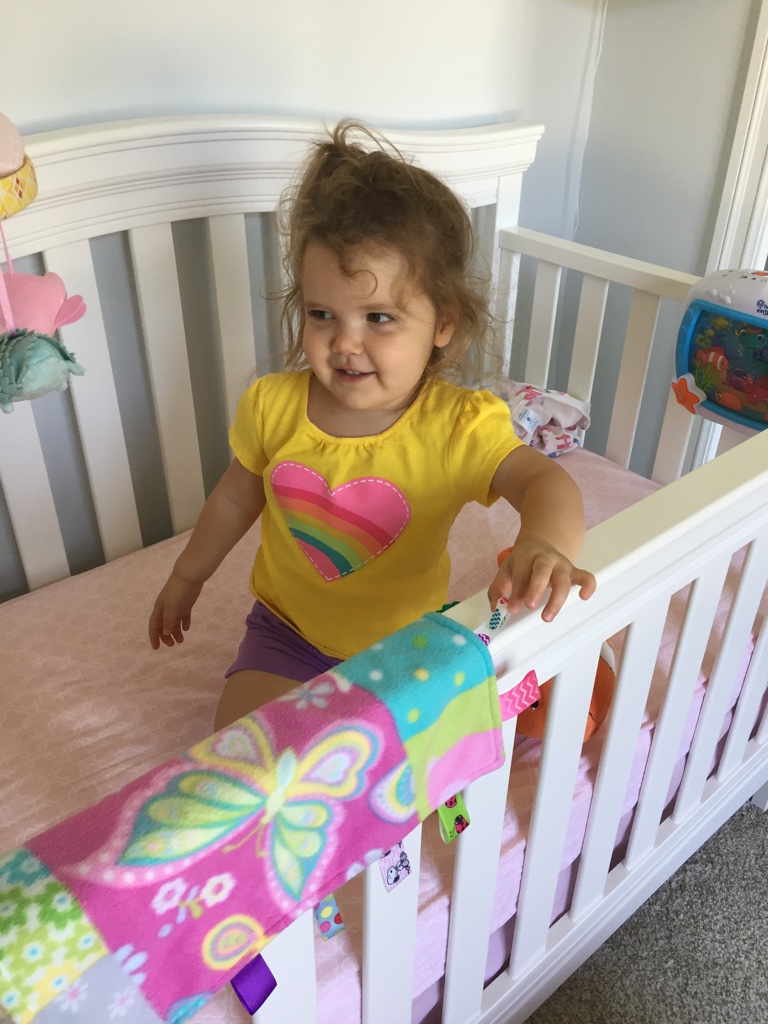 Both girls were fairly fussy most of the day, and nap time did not go well. I tried putting Lucy down, but it didn’t work. No matter what I tried, she would not play quietly while I tried to rock Emmy, so I brought in her chair and the Kindle and officially surrendered to technology. Emily was crying quite a bit while I was rocking her, and instead of showing any sort of compassion Lucy just yelled, “Be quiet, Emily, I can’t hear Daniel Tiger!” Don’t forget to vote for me when the Mother of the Year awards come around. 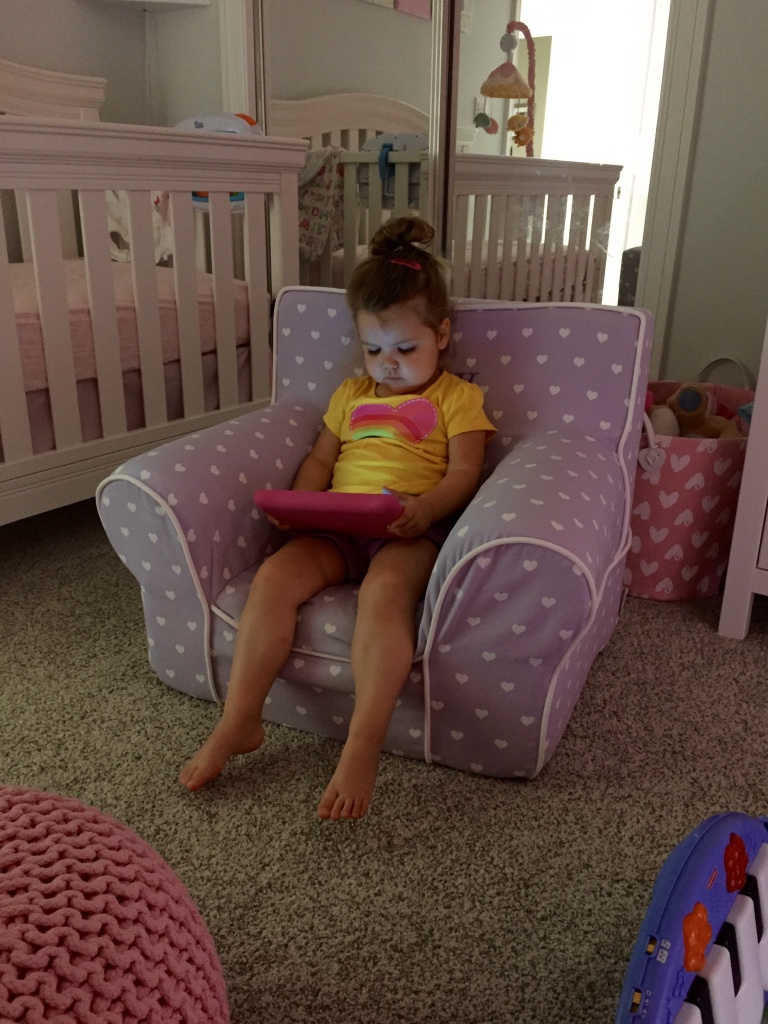 We had a play date scheduled for Wednesday morning, but needed to stop by Grandma Ri’s on the way. Both girls were awake before 7am, so this is what I saw when we pulled in to Rita’s driveway at 9:30am. 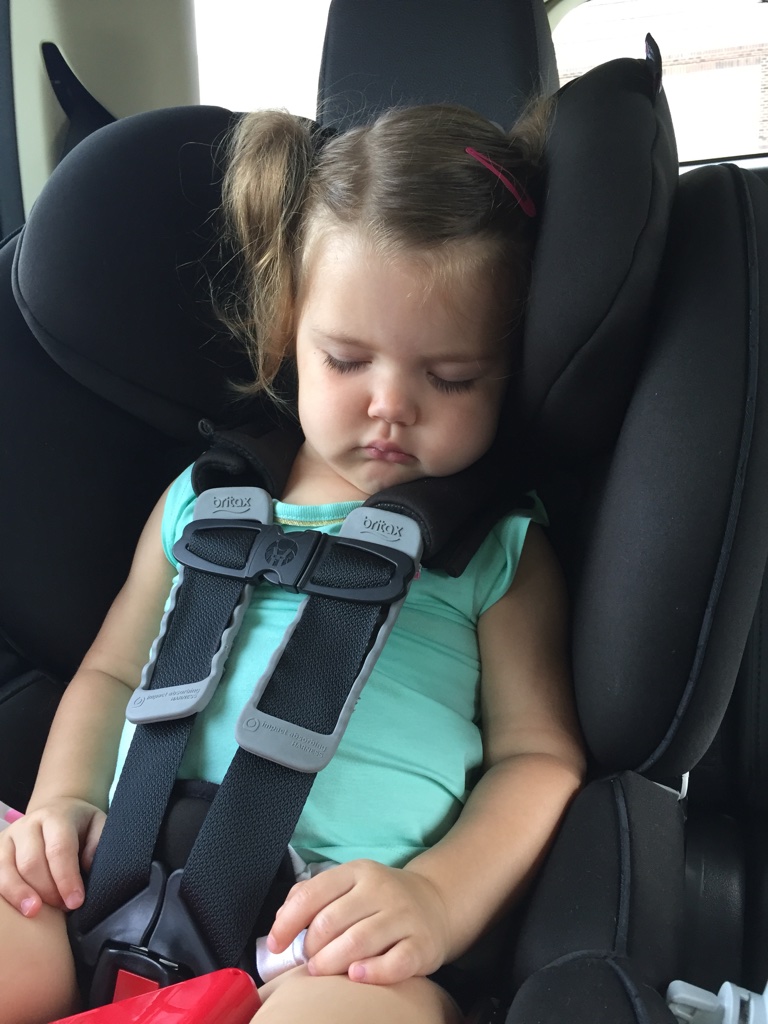 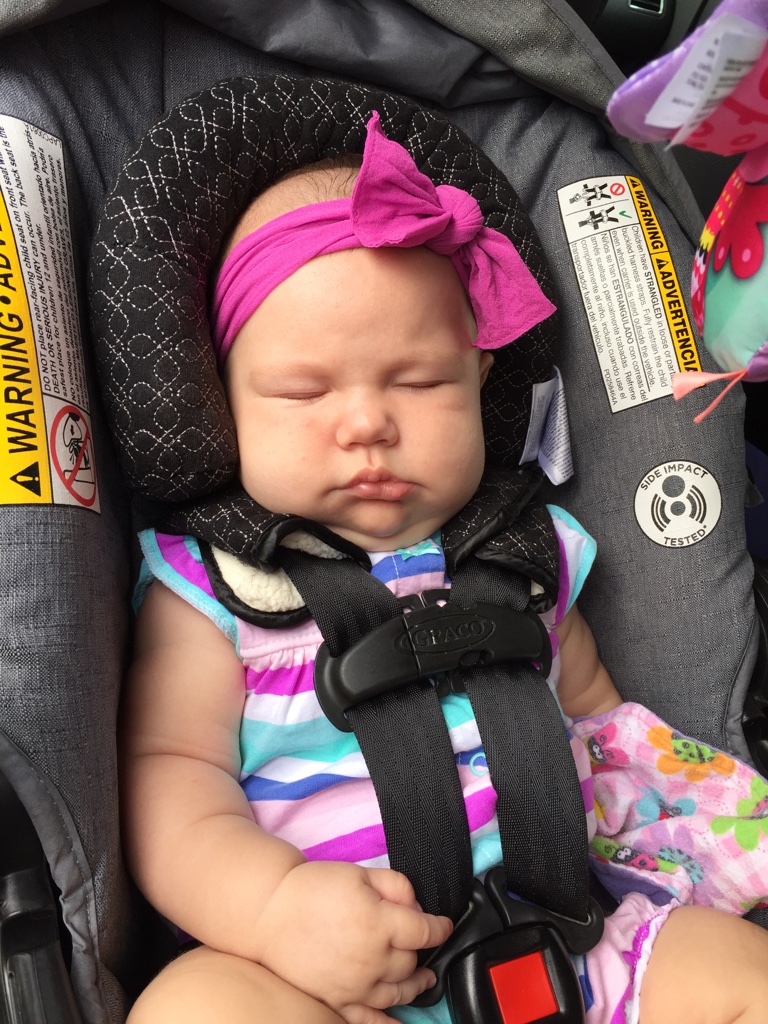 They woke up and rallied for a super cute pic on Grandma Ri’s couch. Isn’t it awesome when you dress your kiddos to match the accent color of their Grandma’s house?? #notplanned #iswear #bythemoonandthestarsinthesky 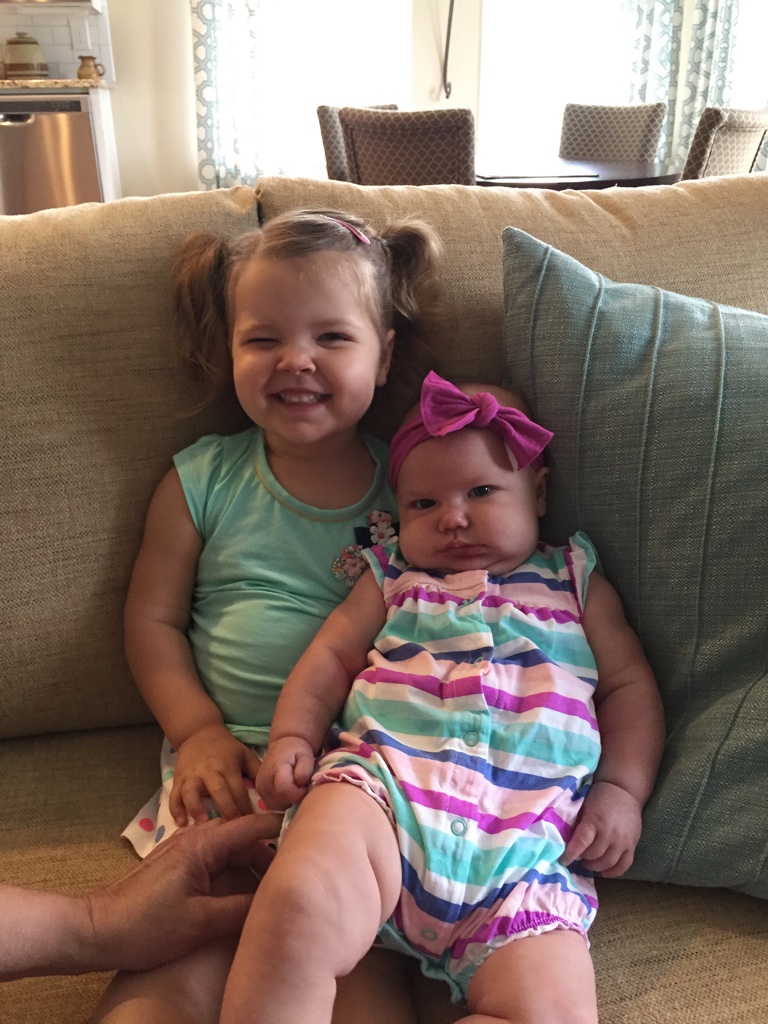 So we made it to our play date, and this is the only picture I managed to take. This tower of power is a little better than ours! 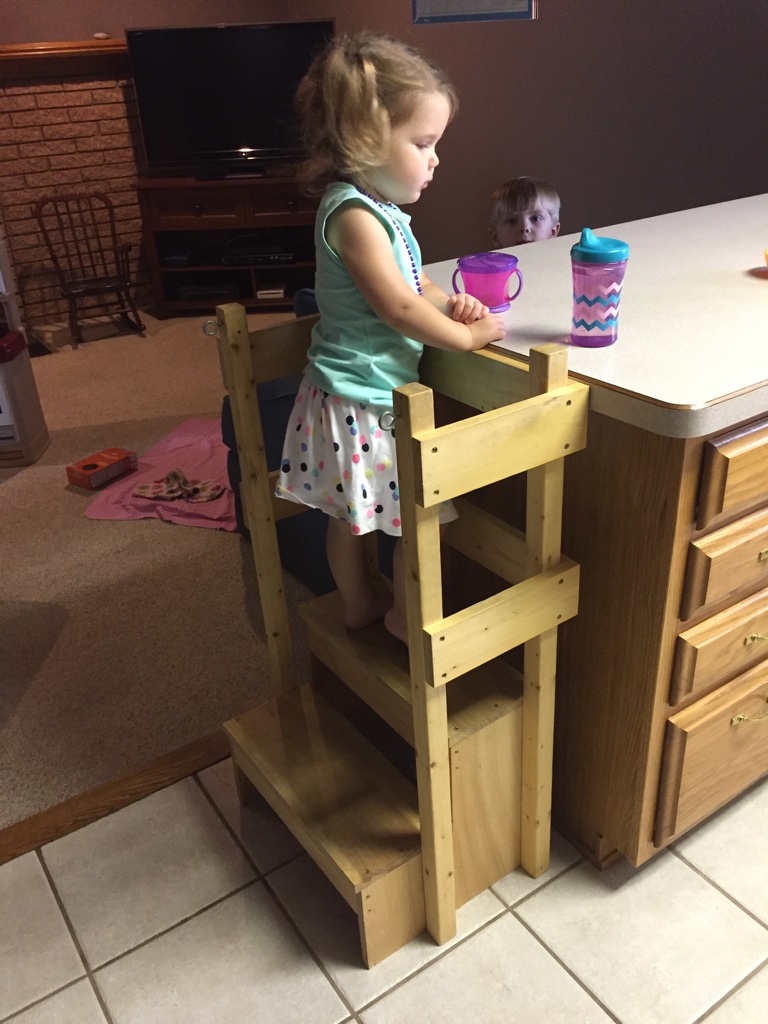 The girls must have gotten together and decided to do something nice for mama since Tuesday was such a hard day, because after we got home from our play date they took super great naps! Lucy went down first and napped for THREE HOURS, and then I rocked Emmy for a bit and put her down and she slept for TWO HOURS! #iforgiveyou 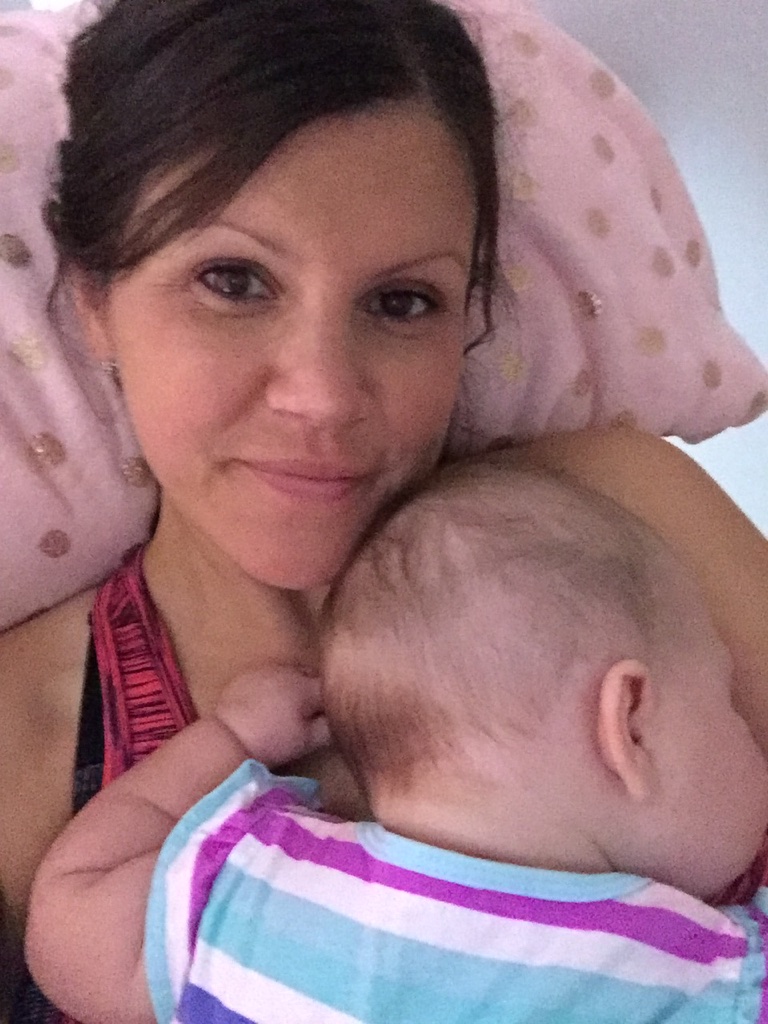 Lucy jumped on the trampoline after dinner last night while we did a little mini photo shoot with Emily. 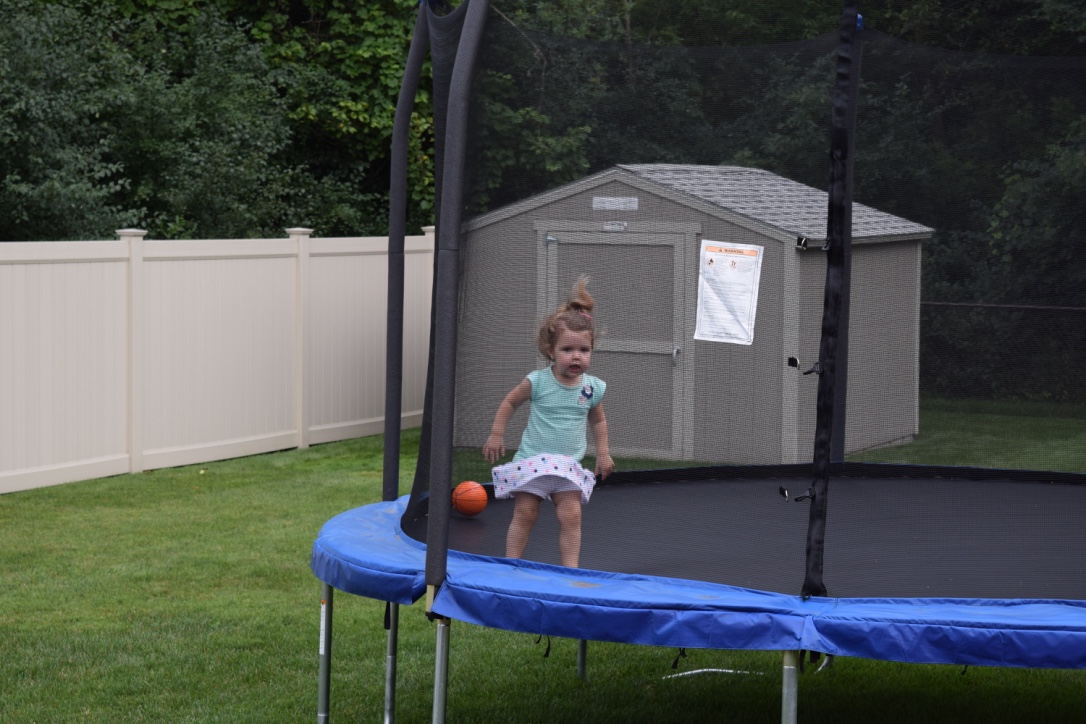 We have this collage of Lucy framed in our house, and both of us just think it’s the cutest thing ever. I was looking at it the other day and realized that Emmy is about the same age as Lucy was in these pictures. (Lucy was a little over 4 months old, Emmy will be 4 months next week.) Unfortunately, Emmy doesn’t fit in this outfit, but we decided we’d try to get Emmy to give us some smiles while I stood in the same spot. 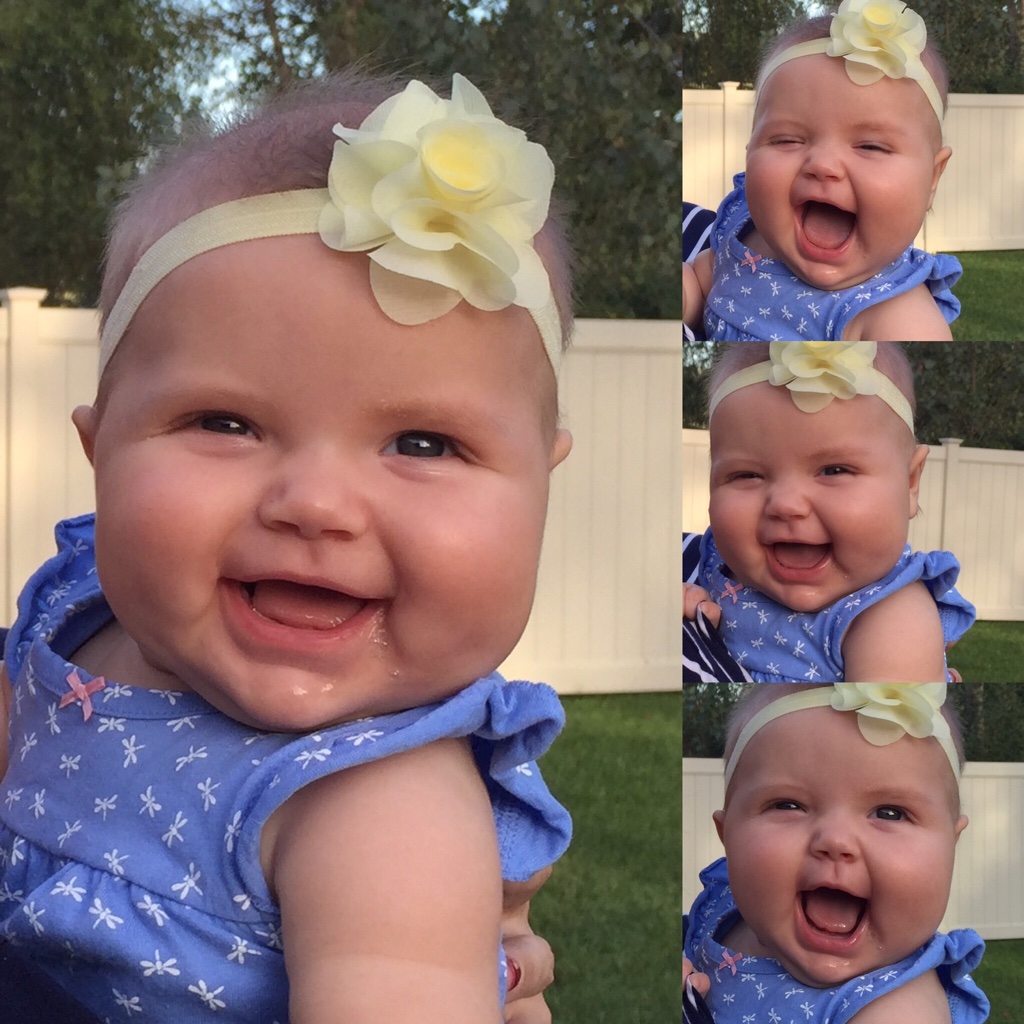 This is the best we got, and the only one where she was smiling. Unlike Lucy, Em makes us work for her smiles. If I hide the camera she usually is super smiley, but as soon as she sees the camera or my phone she focuses on that and forgets to smile. She better shape up! 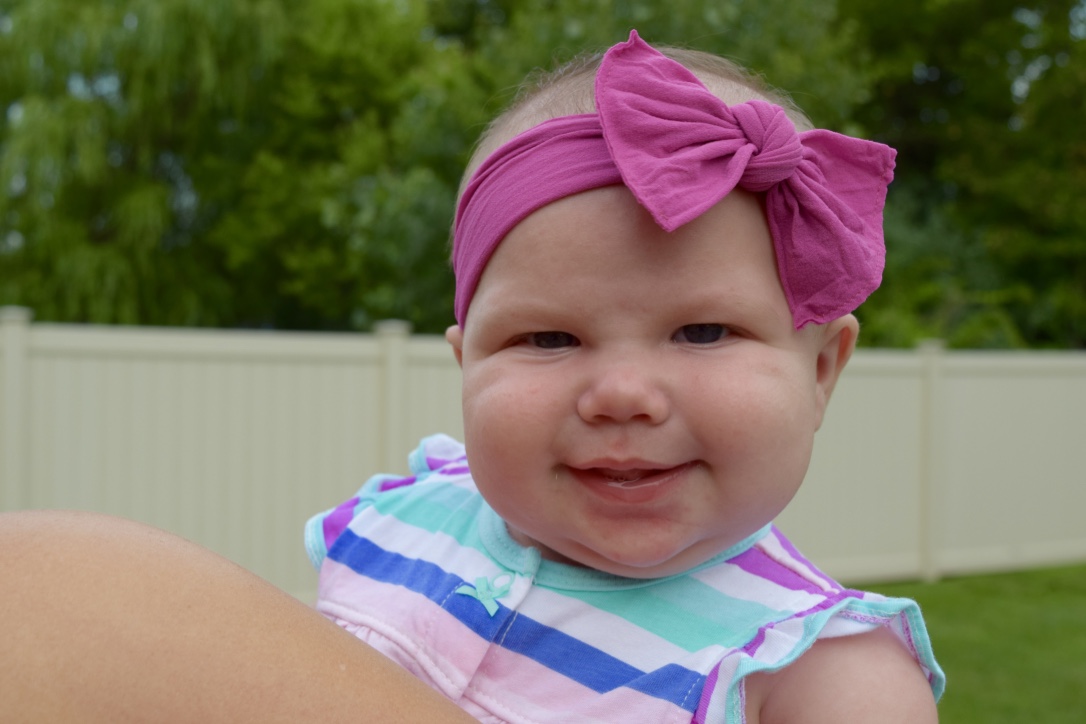 She didn’t smile much because she was too busy chewing on her hand, which is her pose of choice lately. 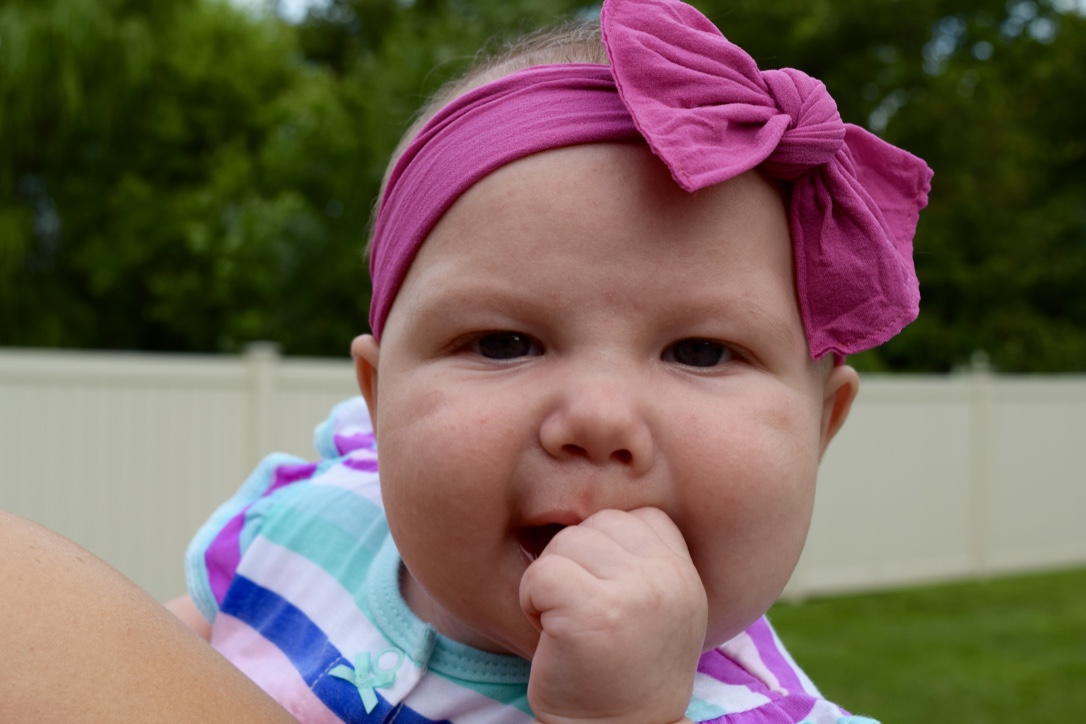 And it’s hard to smile when you are drooling like crazy. All day, every day. Drool is life around here. 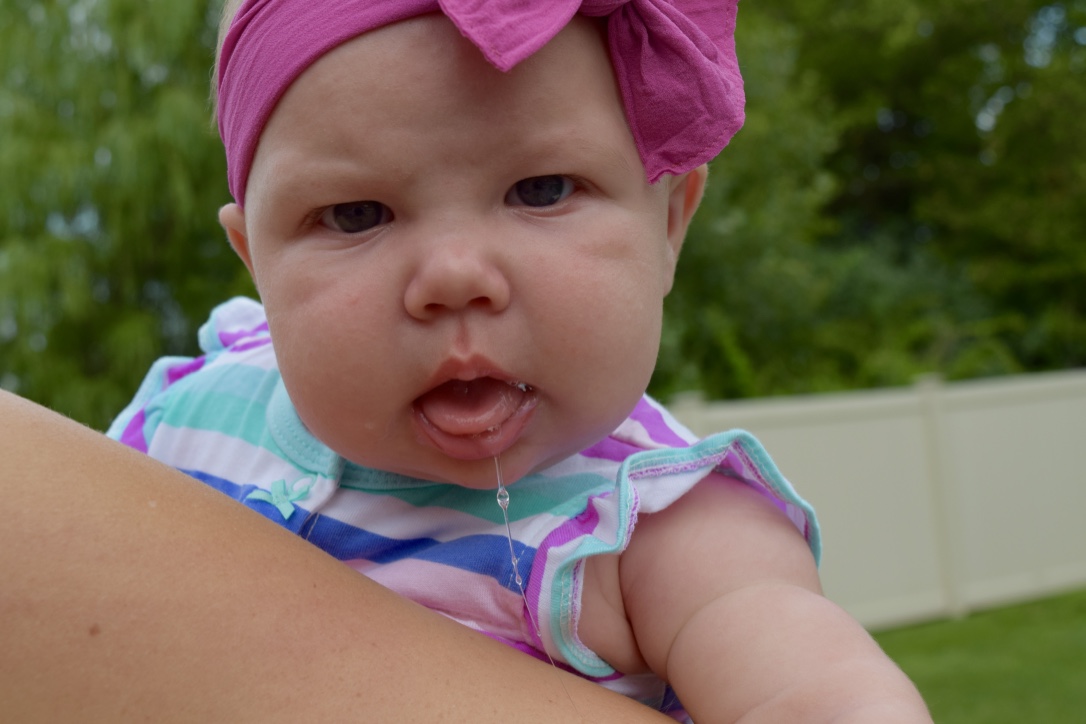 So we couldn’t make a collage like we did for Lucy, but I did make a cute comparison photo! Matty said that Emily’s headband makes her look like Tupac, so naturally I had to make this comparison photo as well. 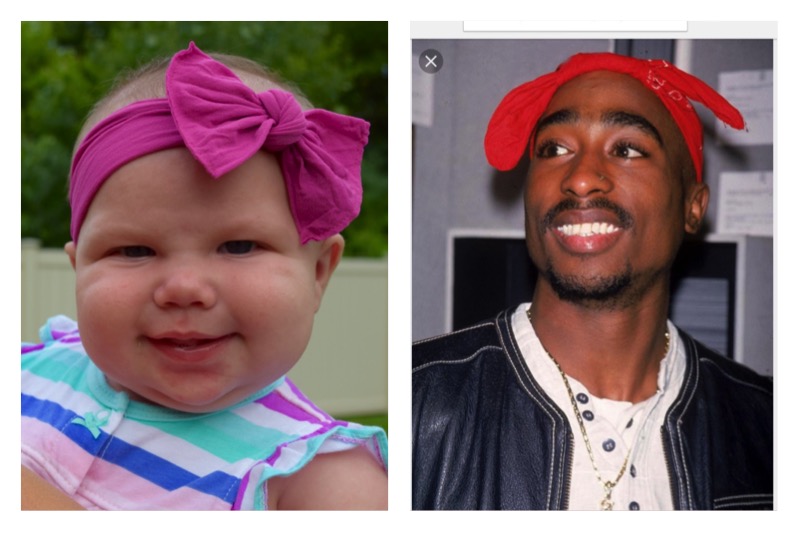 Jeez Louise, slow day in blog land, eh? Thanks for hanging in there with me! I promise to never blog about Tupac ever again. You’d think a mother of two would have more pressing things to do.
We have gymnastics today and then a play date tomorrow. And THEN, on Saturday Matty and I will have approximately 27 hours of time all to ourselves! That’s right, the girls are hitting the road!!! Lu is going to my parents’ house, and Emmy Roses is going to Grandma Ri’s. And guess what we are going to do . . . our own thing! Yep, that’s right. We are going our separate ways during the day to get projects/errands/book reading/naps/relaxing/whatever the heck we want to do done, and then will reconvene for dinner and a movie in the evening. Matty is looking forward to renting an action movie and watching it as loud as he wants, so I may bow out of the movie portion of our staycation as well. We are both really looking forward to having no time constraints, no schedule, and no commitments. One of us will be totally fine, and one of us will still miss our girls terribly. I’ll let you decide.
Have a great weekend!
XOXO