Which means we haven’t been outside much. I just can’t bring myself to put Emmy in the carrier or in the stroller when it’s 85 degrees and 90% humidity. Plus, Lu is going through a weird phase where she only wants to play inside with her toys. Fun for her, BORING for me. She constantly asks me to come and play with her, but what she really means is “come sit next to me and don’t touch my toys.” Some weeks are good, some are bad. I’d call this one mediocre at best.
Monday morning started off dark and wet. It was wet outside due to the huge storm we got, and it was wet inside from all of Lucy’s darn tears. From the moment she woke up she was FUSSY, and everything set off the waterworks. It took lots of extra snuggles . . . and patience . . . to get our day going. 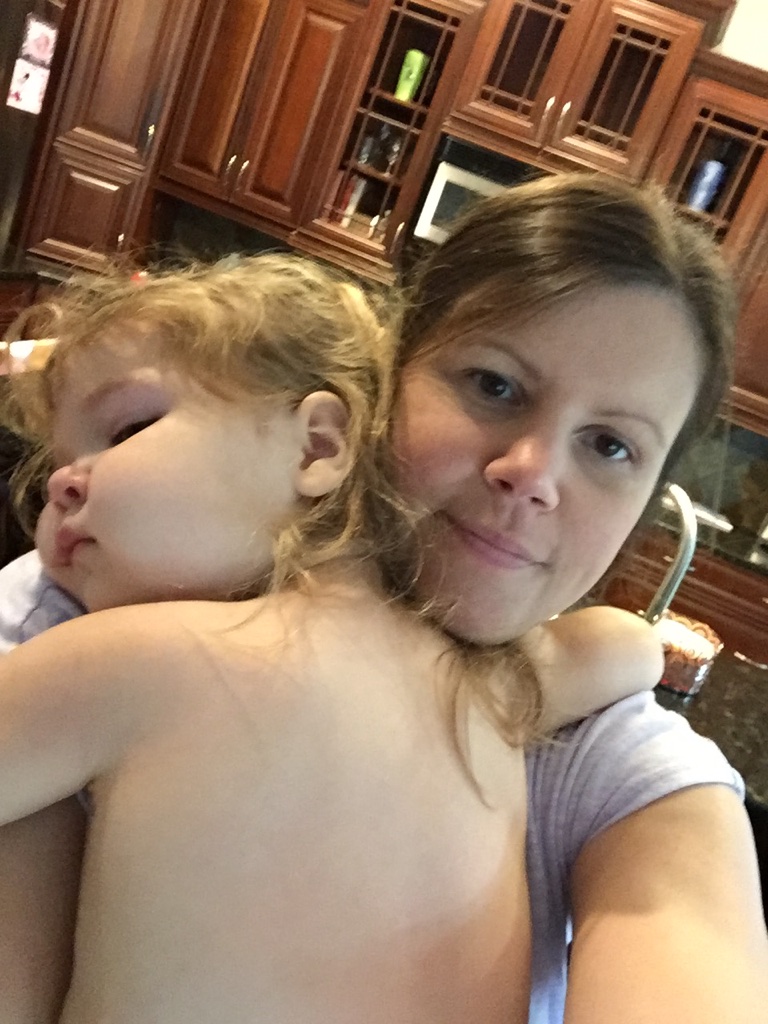 Lucy wanted me to read books to her . . . and only her. Nice try, girlie, but you’ve got a little sister now! This is the only position I could find where she was happy to read books with Emmy around. 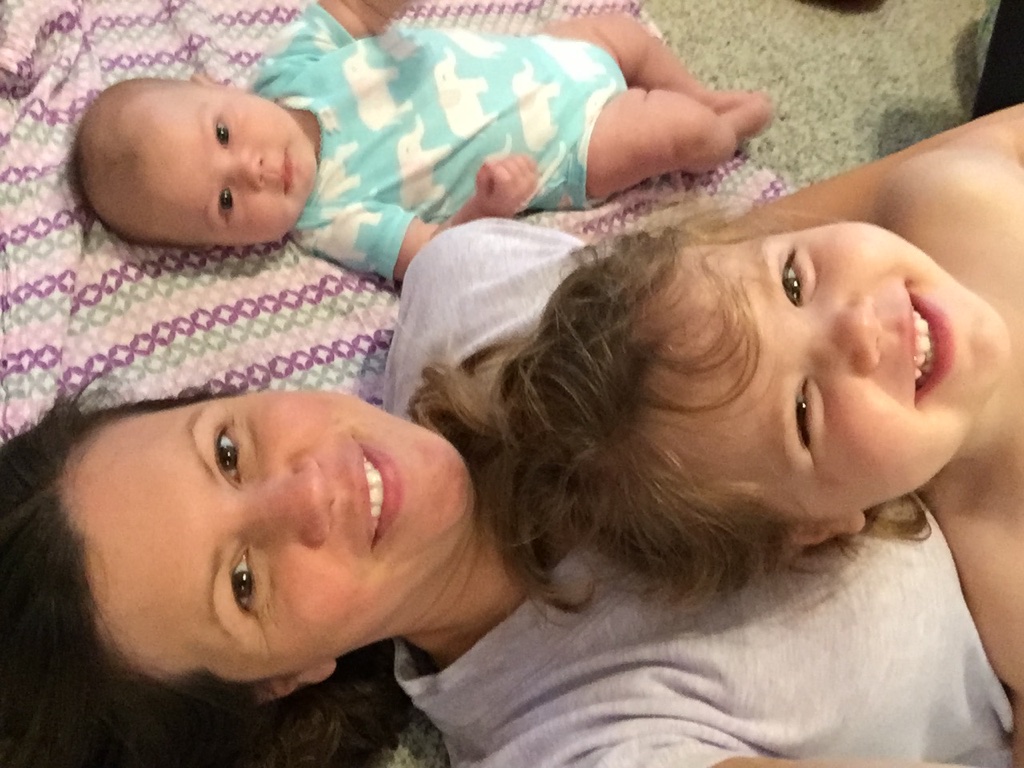 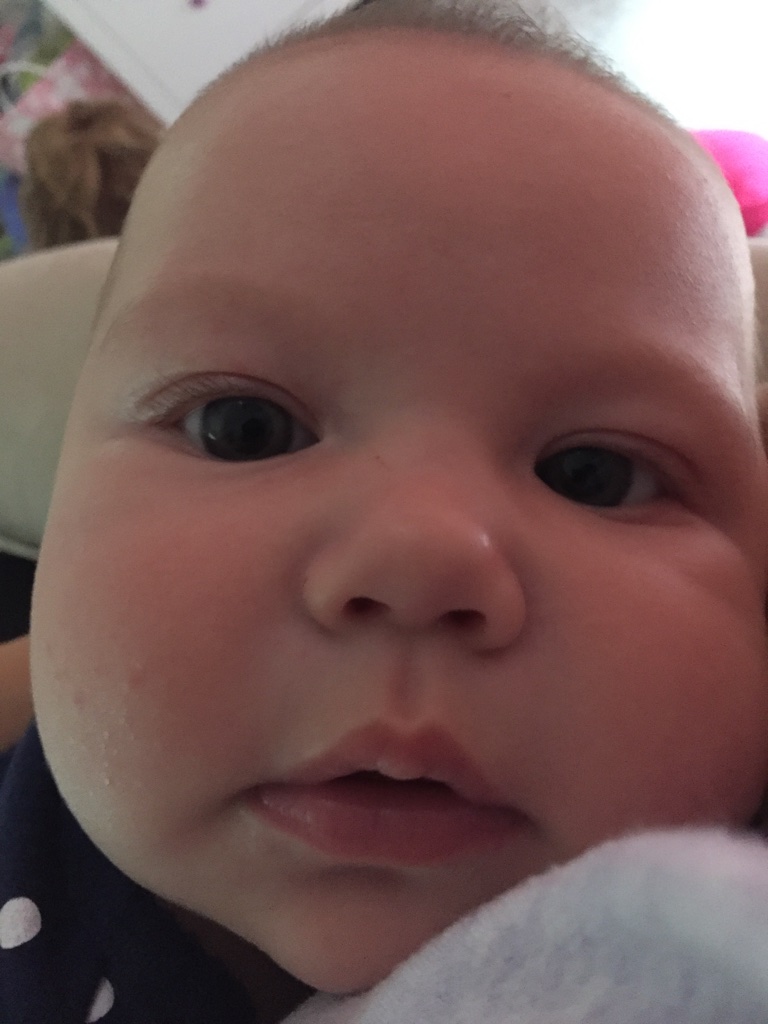 My view while feeding Emily. “I doing gymnastics, momoo!” She starts gymnastics for real this morning. Heaven help us! 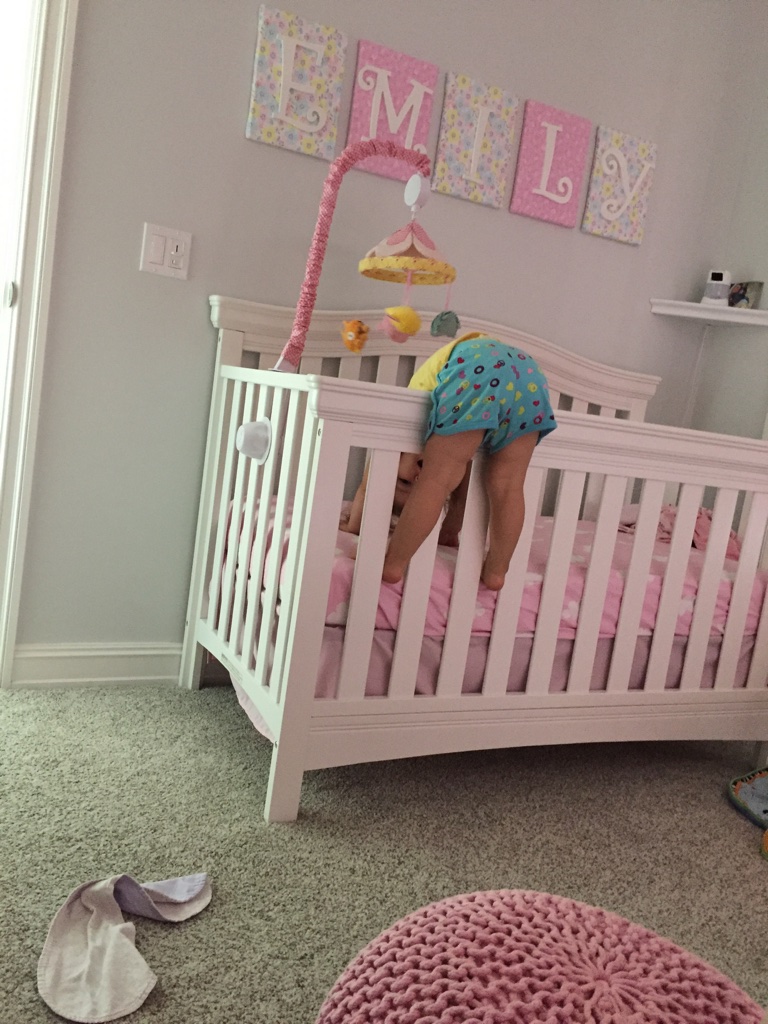 I joined the family Kindermusik class so that I could take both girls instead of getting a sitter for Emily. Em did a great job and already has a reputation as the girl who takes all the stuffies! 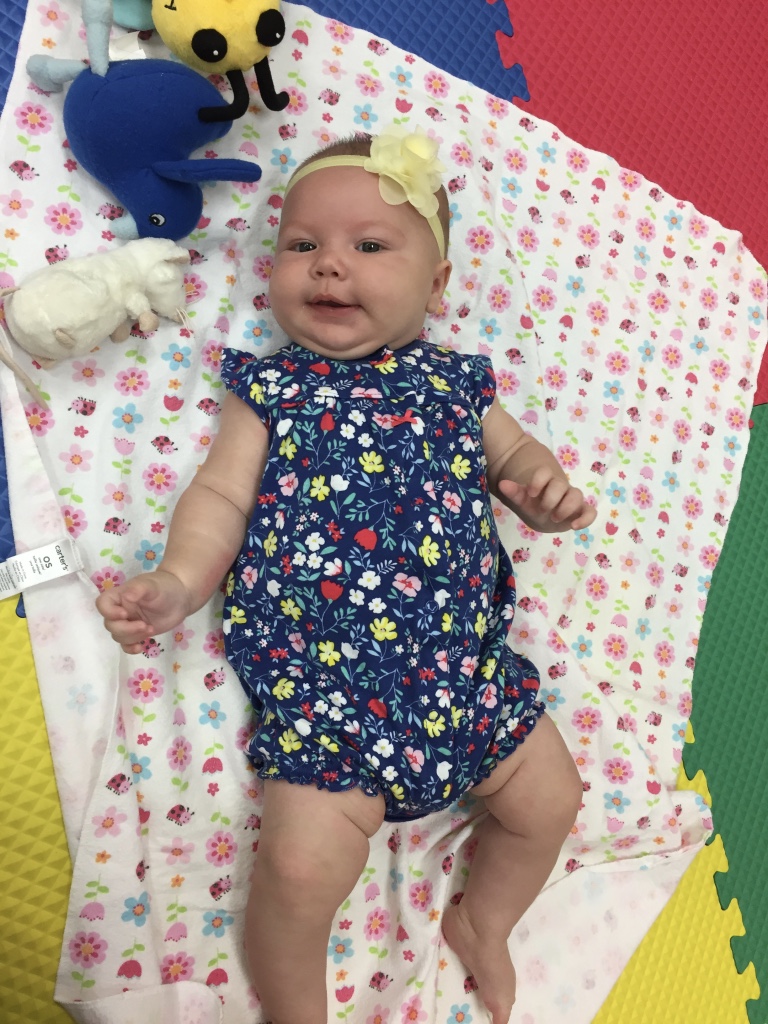 Look at her holding on to two shakers! 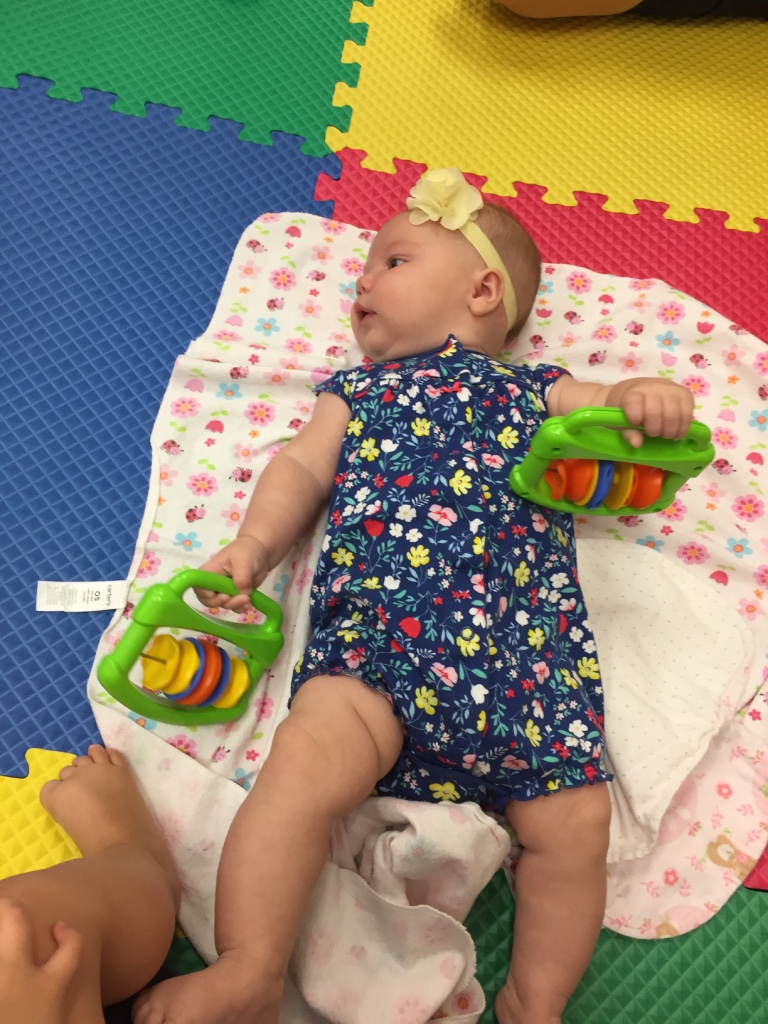 These pictures made me laugh. Emmy’s neck control at 3 months is way better than Lucy’s was at like 5 months. 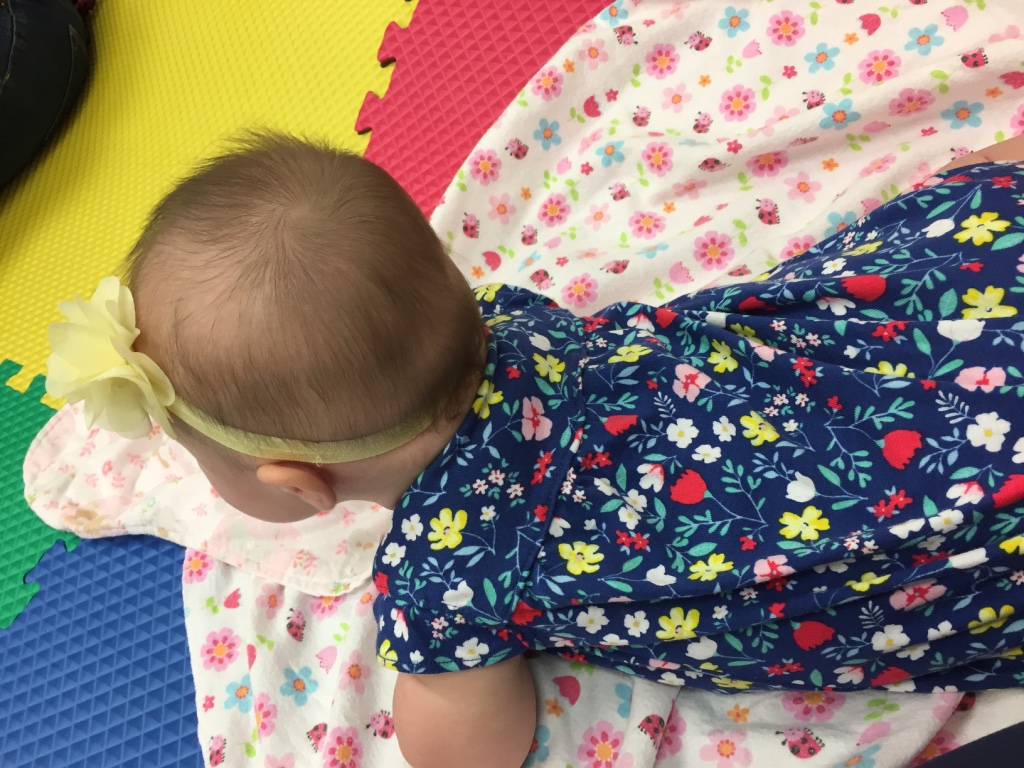 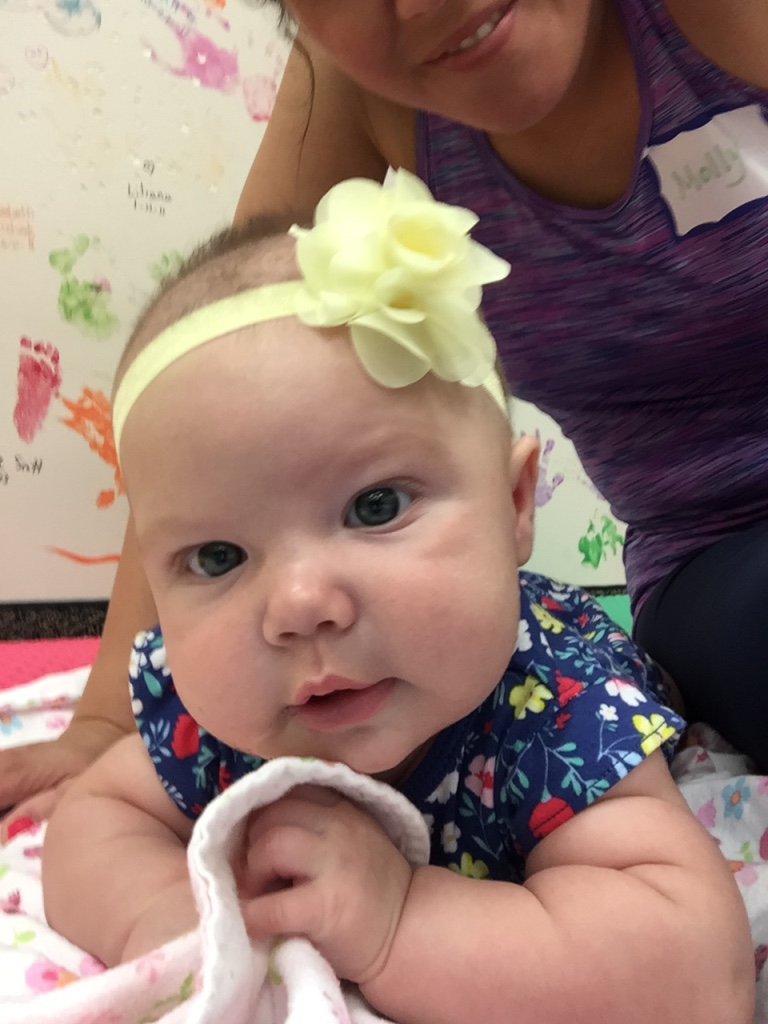 The baby in the headband is Lucy at her first Kindermusik class at 4 months old. That’s as high as she could lift her poor head and could only hold it up for a second or two. Thank goodness for physical therapy! 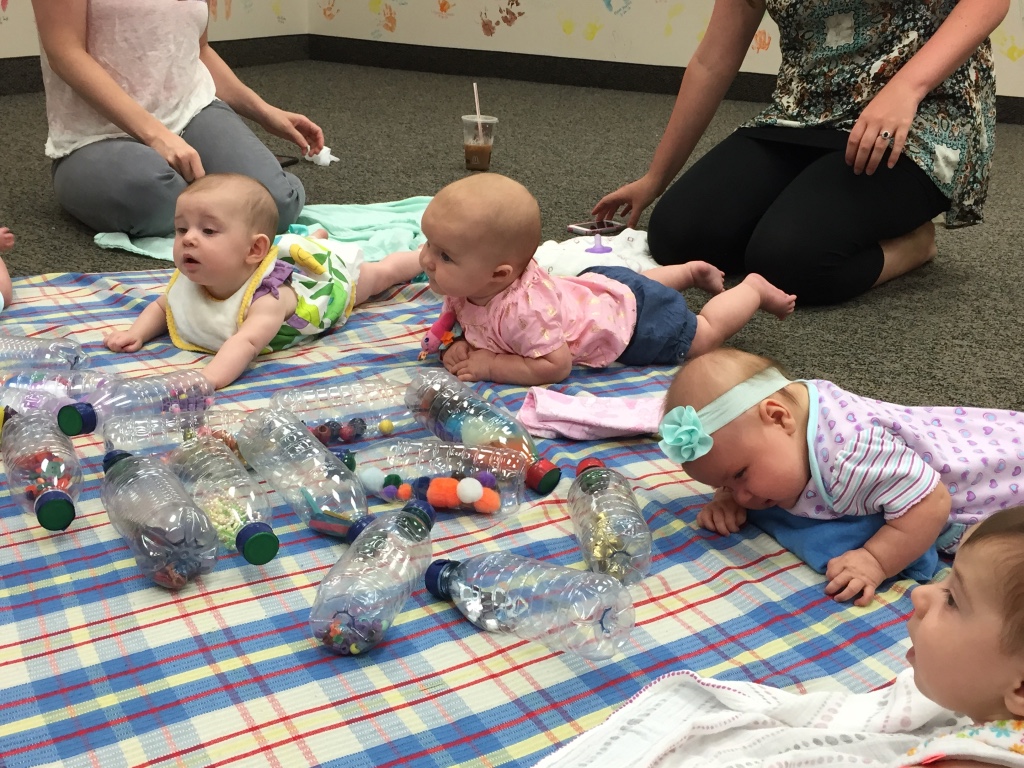 Now look at her . . . two years later and she has excellent neck control! 😉 The kiddos were supposed to be tapping their knees, but Lucy was ever so gently tapping Emily’s head! 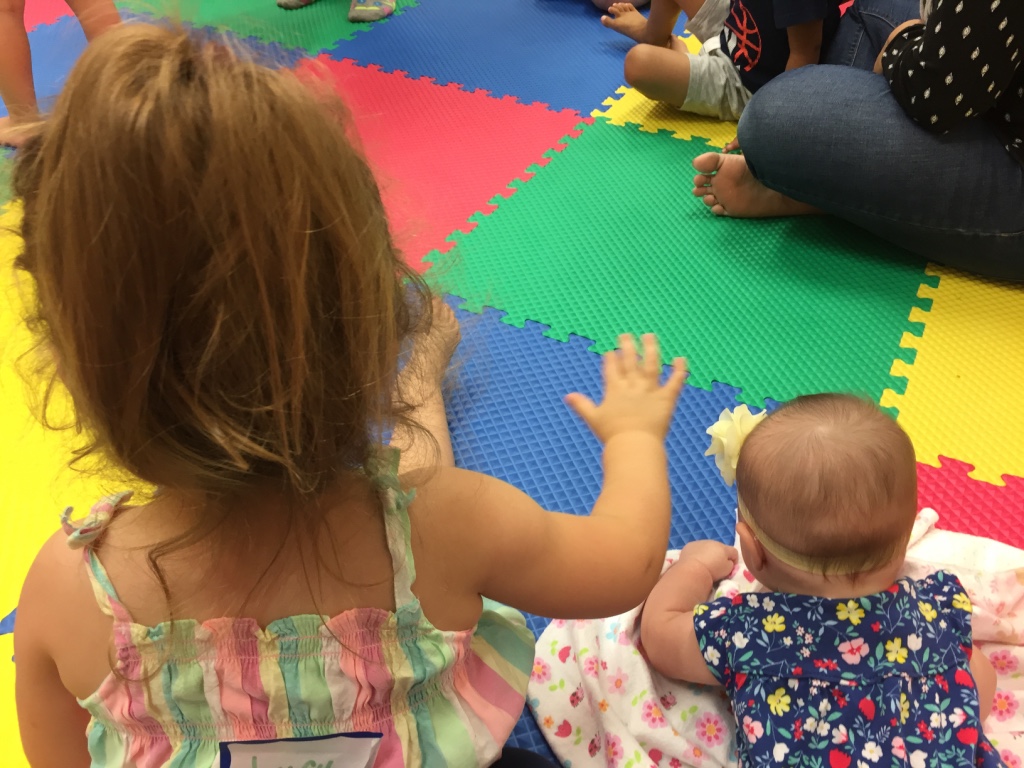 Super excited to get a fish shaker! 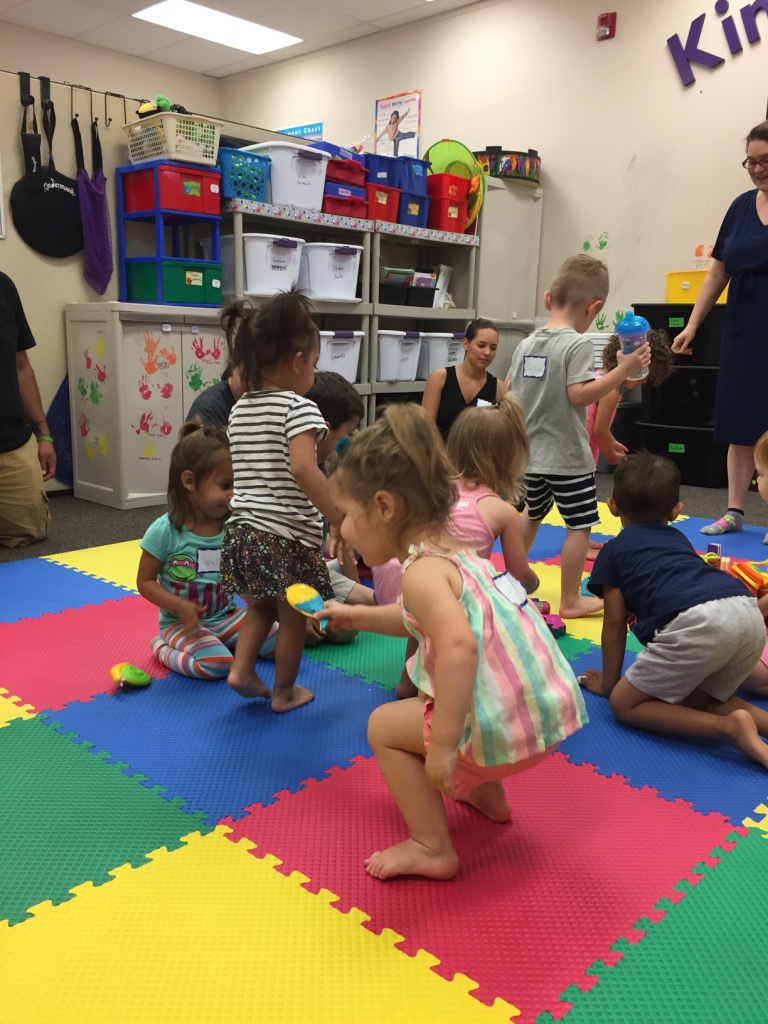 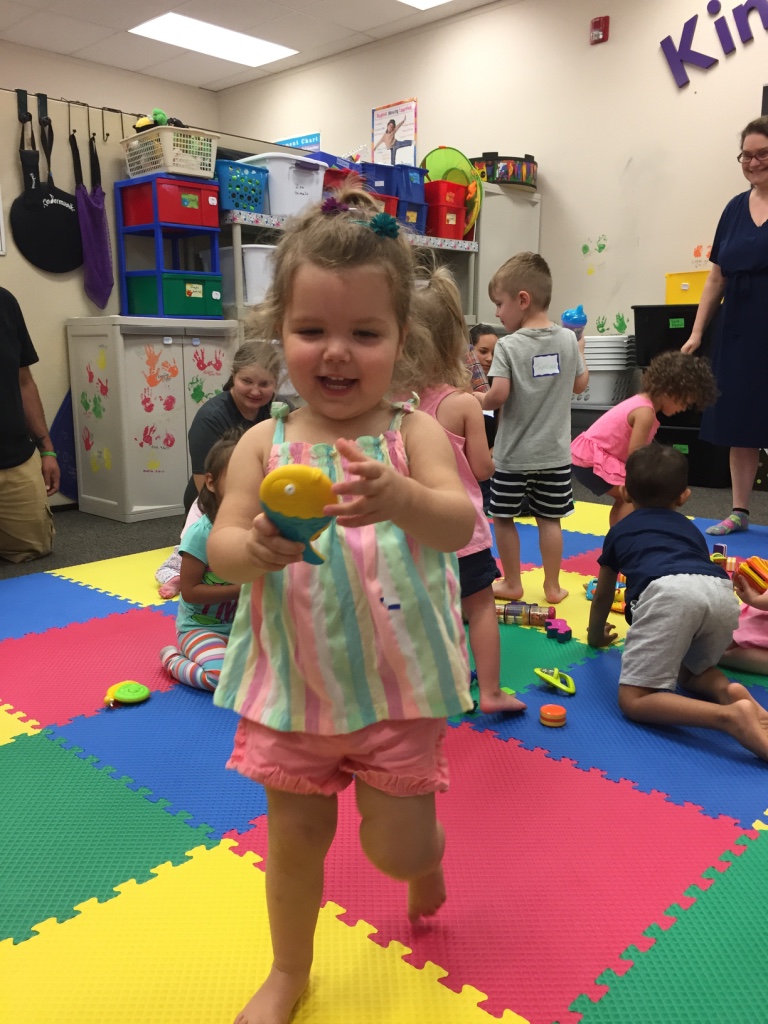 Matty has golf on Tuesdays, and I refuse to cook dinner since he isn’t home. Lucy and I went to pick up some of our favorite Chicken Lemon Rice soup, and she dressed to impress! Sunnies on, sparkle shoes on the wrong feet, and a cross body purse. Inside the purse was one of her most prized stuffies: New Seal Pup. Now, New Seal Pup is actually a turtle, but for some reason Lu thinks it’s a seal pup. She started calling him NEW seal pup so as not to be confused with a stuffie that is now called Old Seal Pup . . . and is actually a seal pup. You follow? I’ll take a picture sometime and show you. 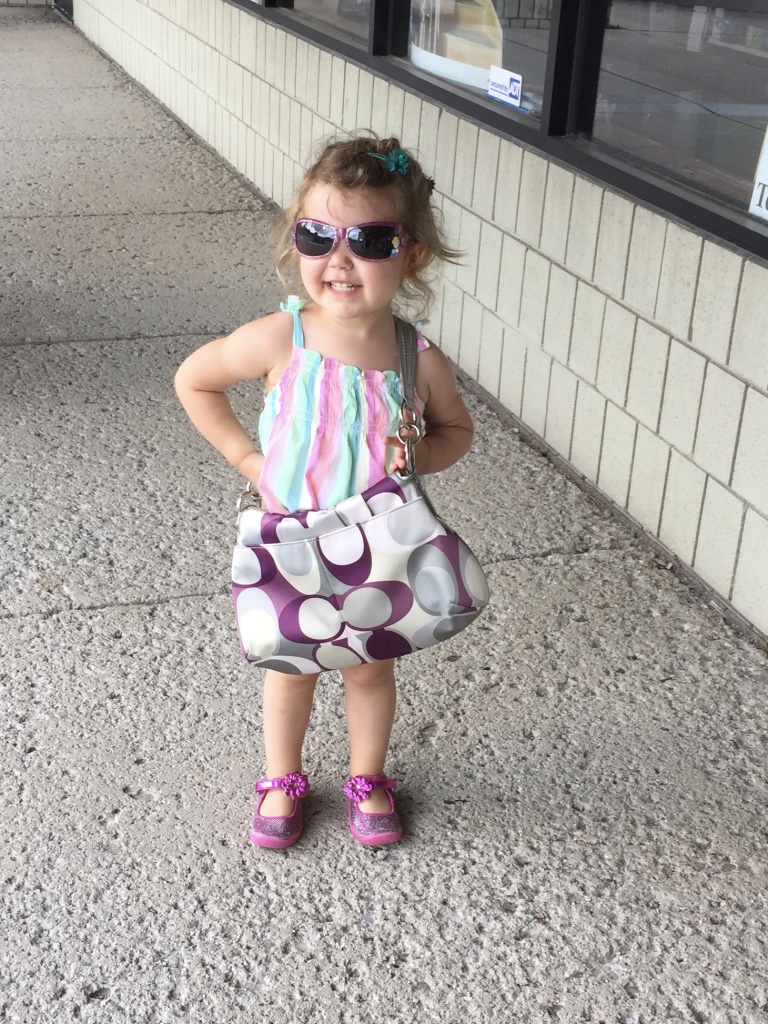 Two adorable girlies getting ready for their baths. 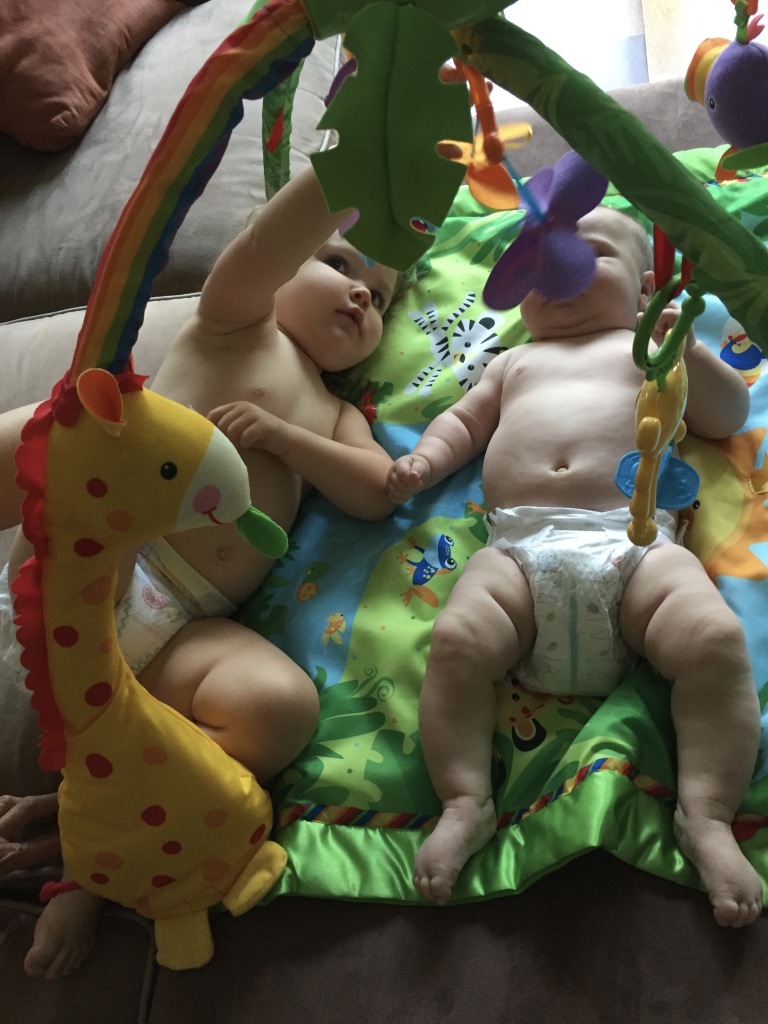 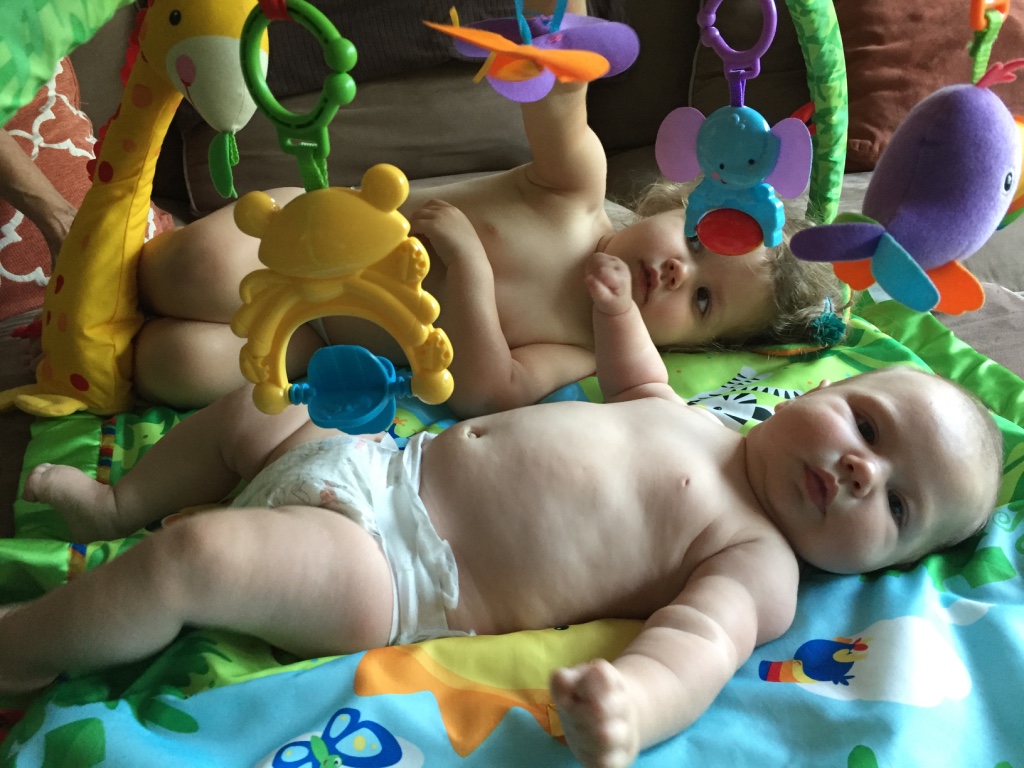 And they were right back at it yesterday morning! 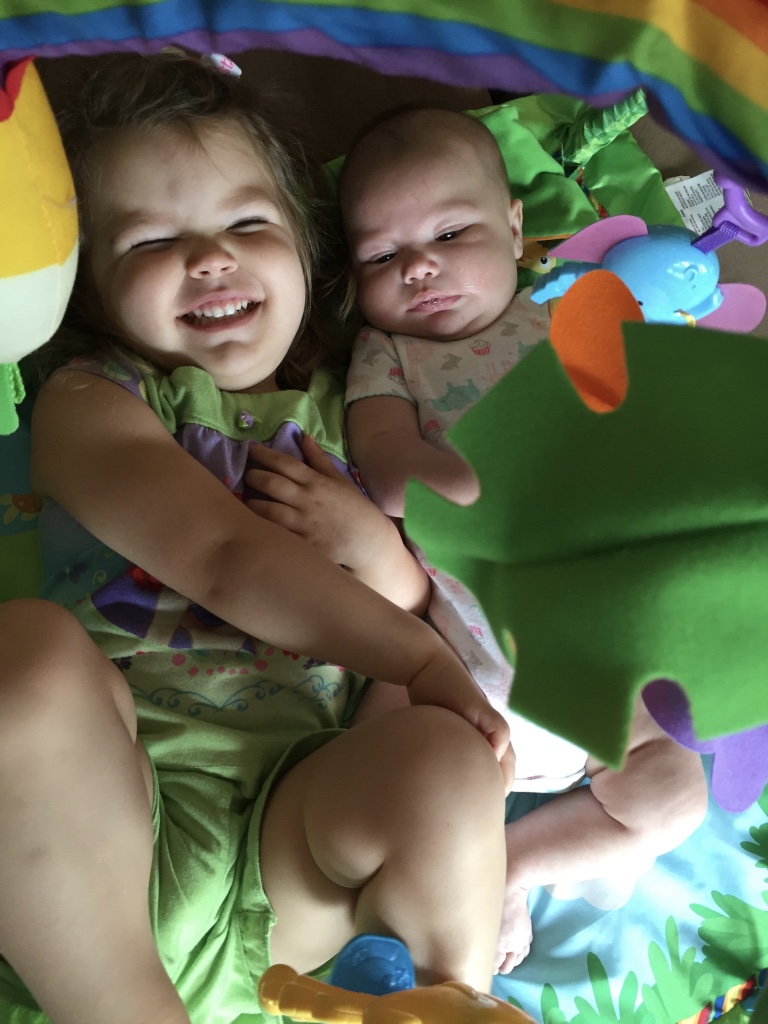 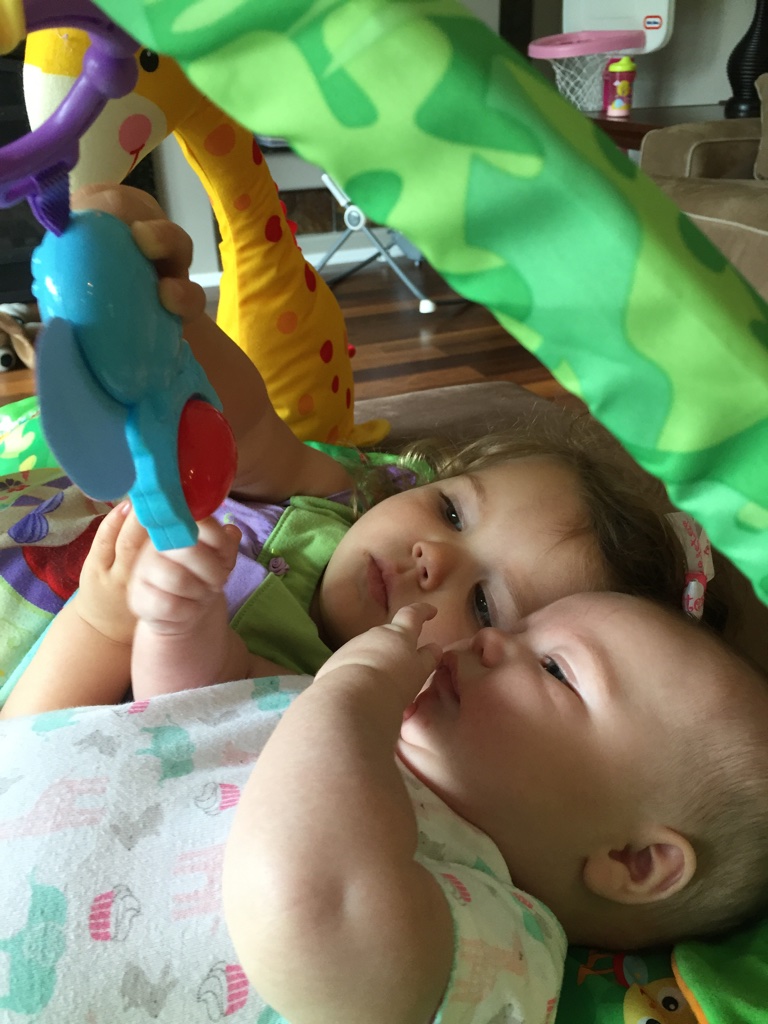 That grip is getting good! 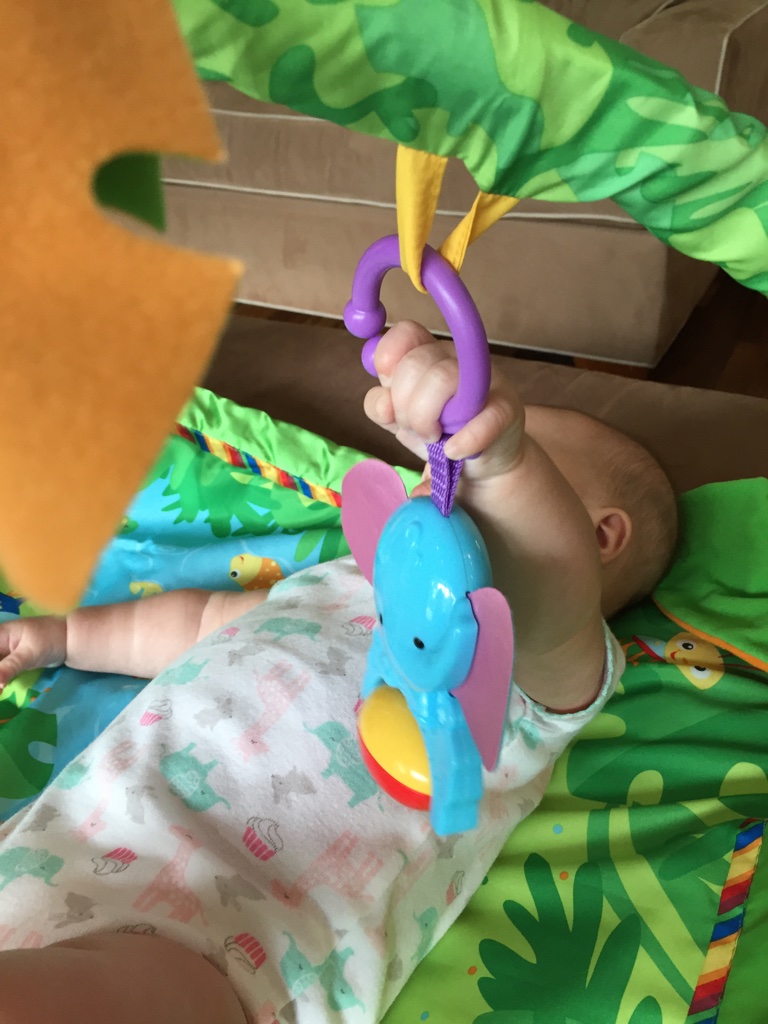 The bus! Where do I even begin? Aunt Carla and Uncle Zack got Lucy this bus last Christmas. About two months ago she started filling it with all of her Little People. She also has a Little People airplane that she fills up as well. She is OBSESSED. For the past two months, the bus, the airplane, and her basket of Little People are basically all the entertainment she needs. She’s been riding the bus around the house for a while now, which is super hilarious, but I’m seriously worried she’s going to break it and then her world will end. When I saw this (much more appropriately sized) ride on pony listed for $5 on a mom to mom Facebook site, I knew I had to get it! She likes it, and . . . . BONUS . . . now she likes to put her Little People into the yellow bucket on the front! #mamawin 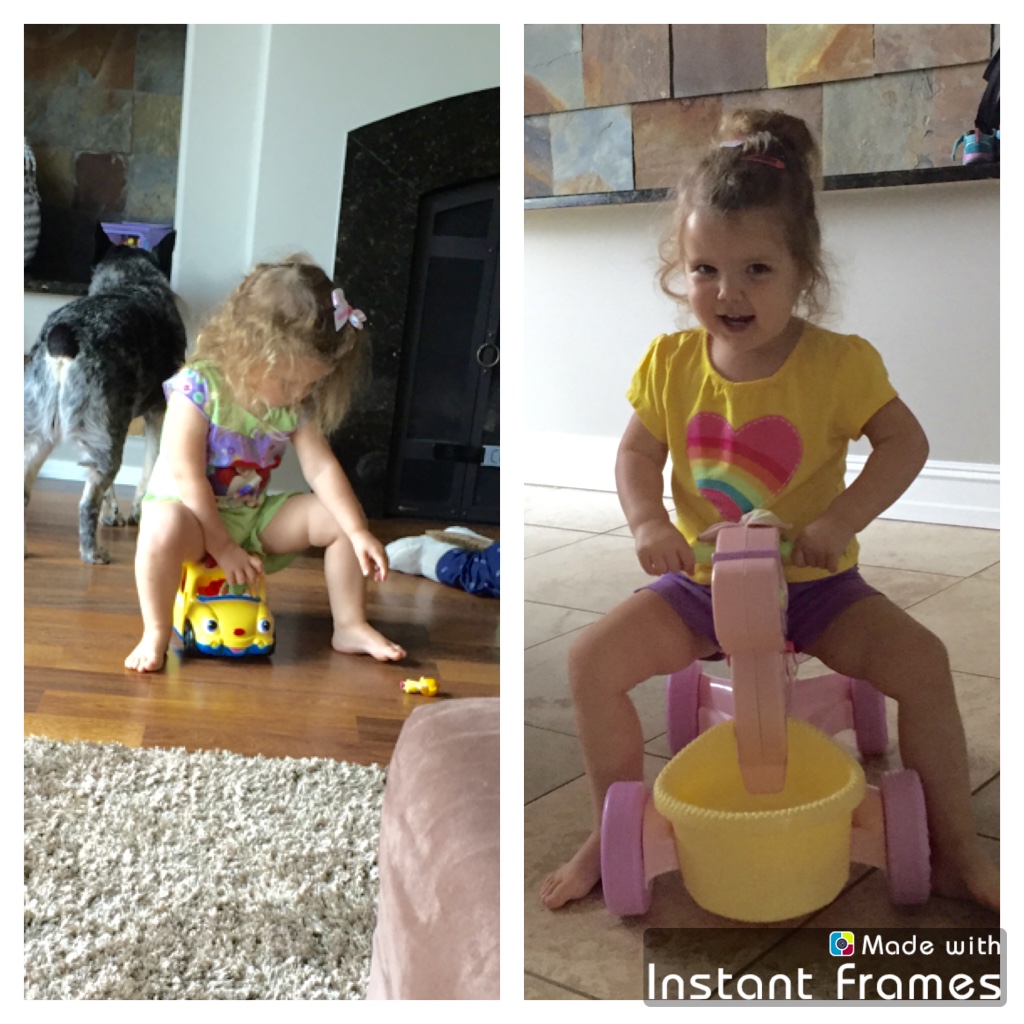 How did people know if their babies were asleep before selfies were invented?? 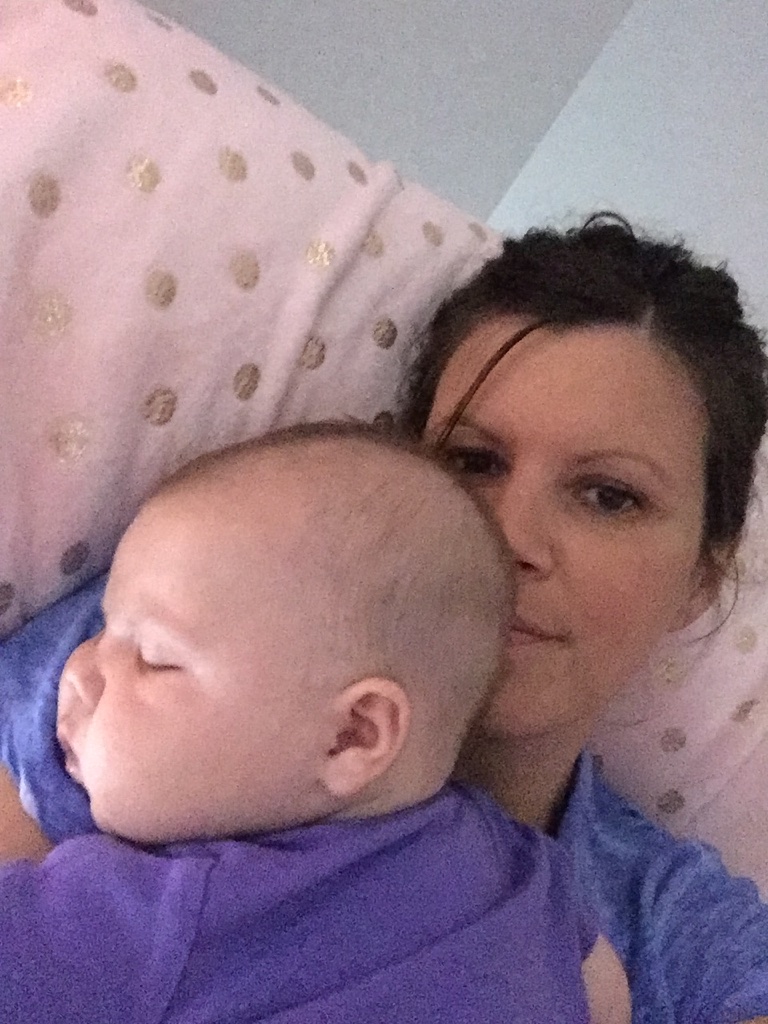 My friend Marie recently had an online book party for Usborne books. If you’ve never heard of this publisher, they have fantastic books for kids. I exercised A LOT of self control and only ordered two books for Lucy and one little box set of black and white contrast books for Emmy. Even though the look on her face might say otherwise, we had a good time reading them. 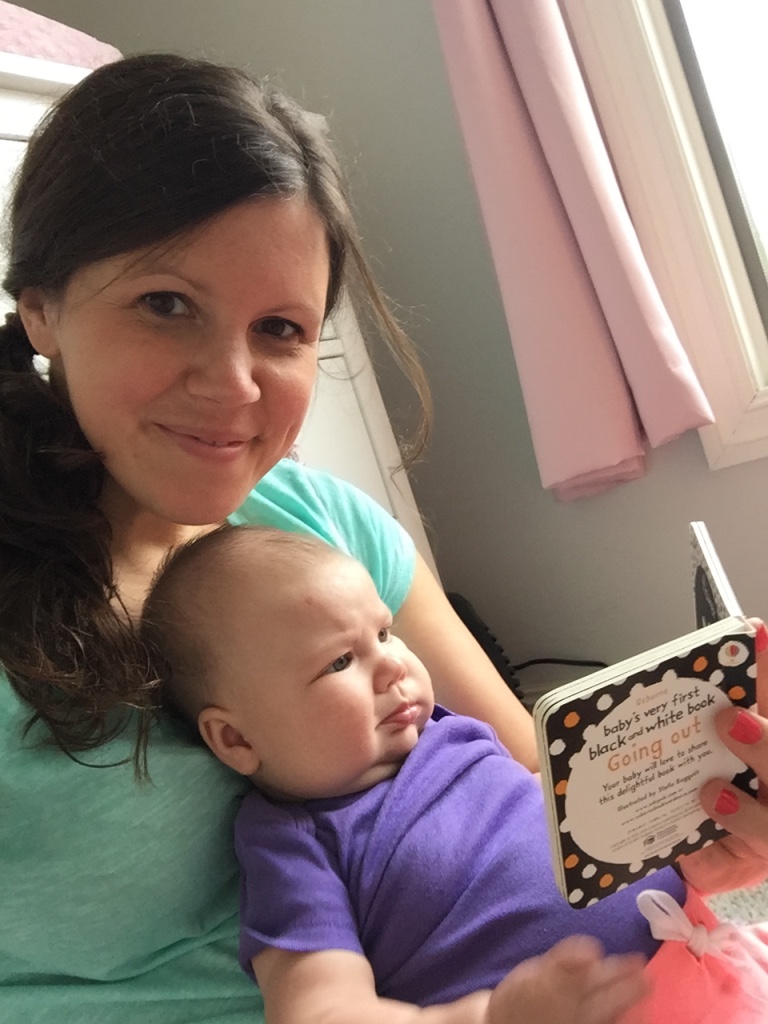 And that’s all she wrote. It’s currently 10:05 on Wednesday evening as I finish up this post. I finished a workout a little bit ago and need to hit the shower. I’m trying REALLY hard to get myself back into a workout routine. The “you just had a baby!” excuse can only last so long. Unfortunately, the only chunk of uninterrupted time I can get to workout is late in the evening after the girls are asleep and the chores are done. I could try to do it at nap time, but Emmy is still a bit inconsistent with how long she sleeps, and half the time Lu doesn’t nap at all! I tried to workout last weekend while Em was sleeping and Lucy was playing. It was very comical, and Matty took a video. If I didn’t look so ridiculous I’d show it to you. Lu was hanging all over me saying, “Don’t do that momoo, stop momoo” and trying to hug me. Cute, yes, but not productive.
Is everyone rested up after a marathon day of Prime shopping?? Early access to the Nordstrom Anniversary sale starts today for those of us with the Nordstrom Card. Prime Day and the Anniversary Sale all in one week . . . this is what I’ve been training for!! 😉 It’s time to hunker down, make my lists, and get some Christmas shopping done! Now, who wants to watch my girls today so I can focus up? Jk. Sort of.
We are looking forward to another low key weekend. I can’t wait!
Have a good one!
XOXO