We had a very low key weekend, which we love. At one point on Saturday afternoon, all four of us were hanging out and playing in Emily’s room and Matty and I were discussing how nice it was to just sit and relax with the girls and not have to worry about going somewhere or getting anything done. I feel like a truly relaxing day doesn’t happen very often, but Saturday was pretty nice!
This picture was taken last week during our walk in the park one night. Matty thought the clouds looked pretty cool. 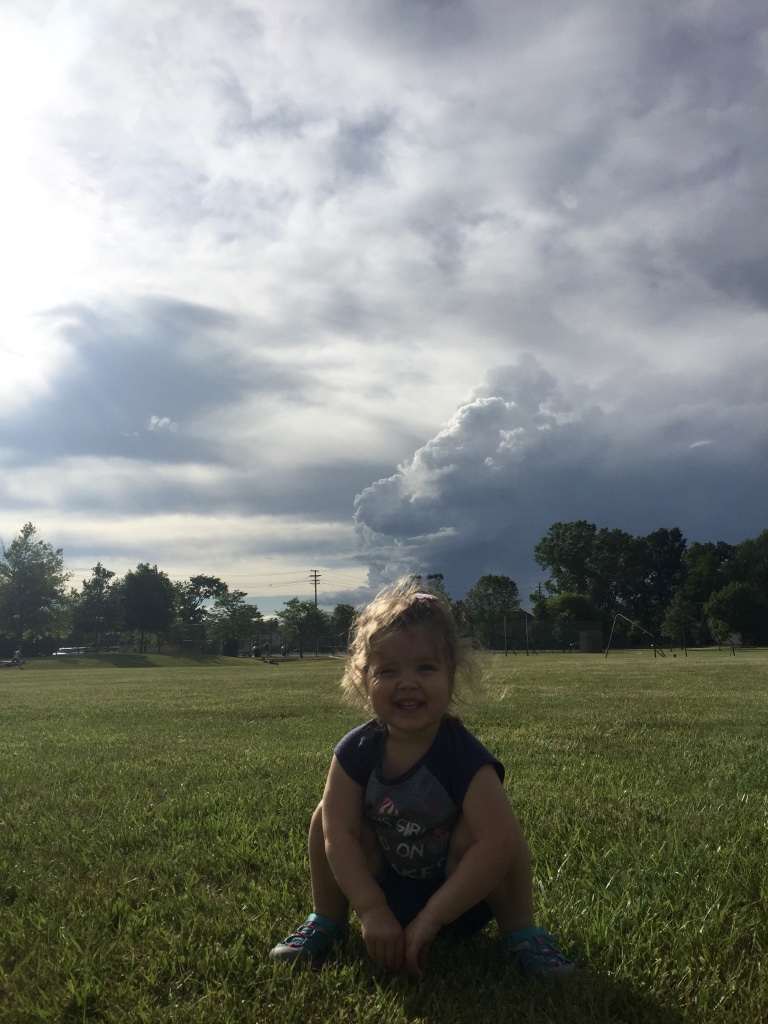 I always try to enjoy a little one on one time with Emmy while Matty reads to Lucy and puts her to bed. 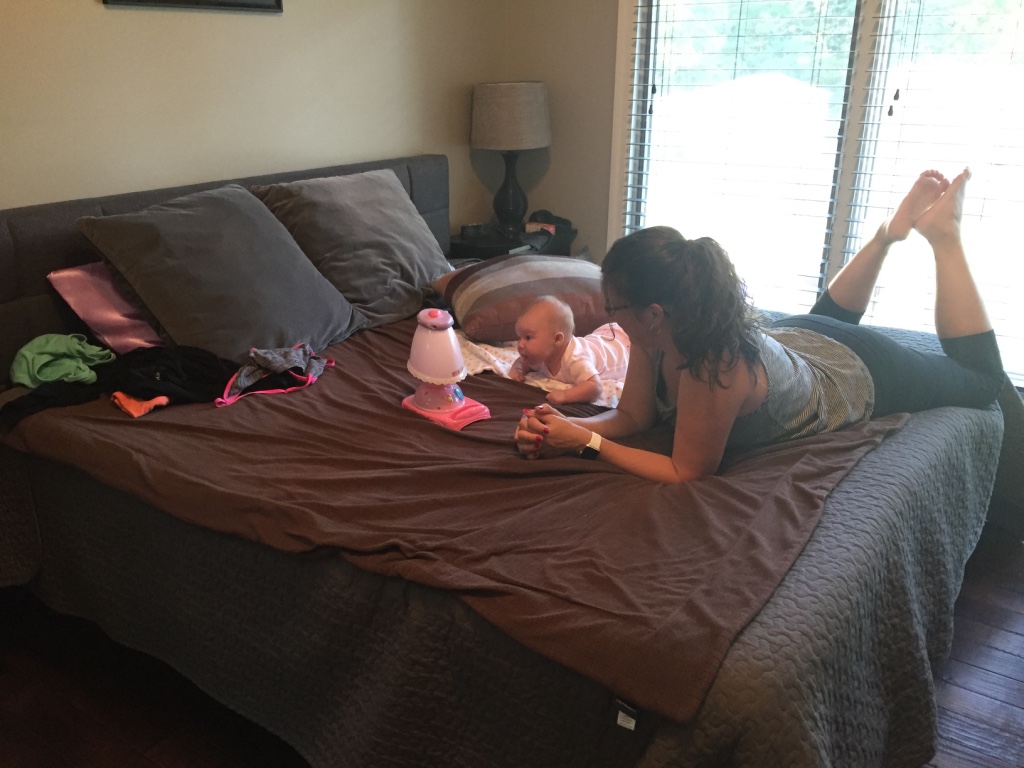 This happened on Thursday evening, and was super cute. I joked with Matty that years ago Thursdays used to be dollar beer night, now he “swings like a monkey” with his daughter in our basement gym. 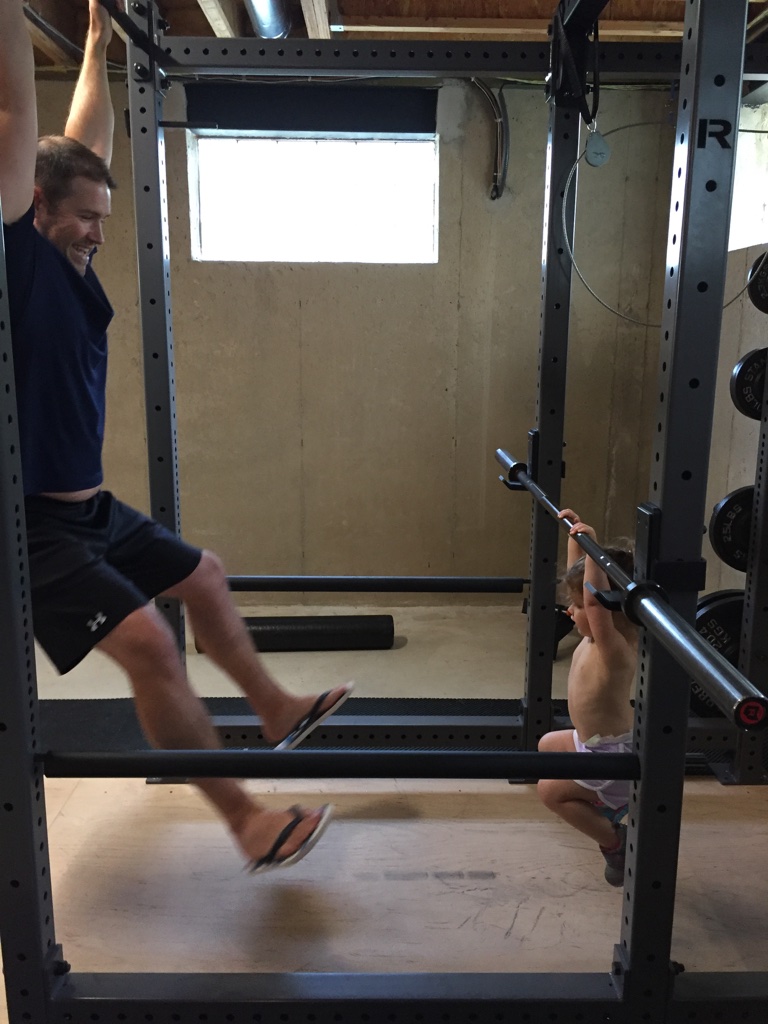 Lucy was reading books to Emily. She started every page with “Once upon a time.” It was precious. 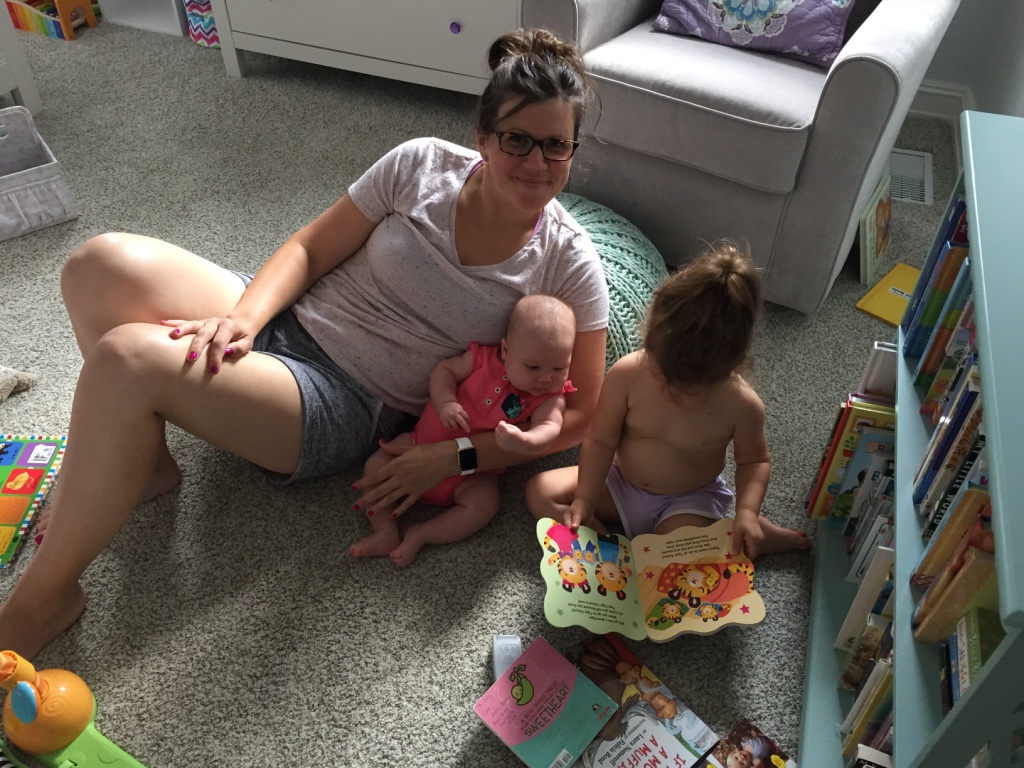 How adorable is this romper from Em’s Aunt Sarah? A definite winner! 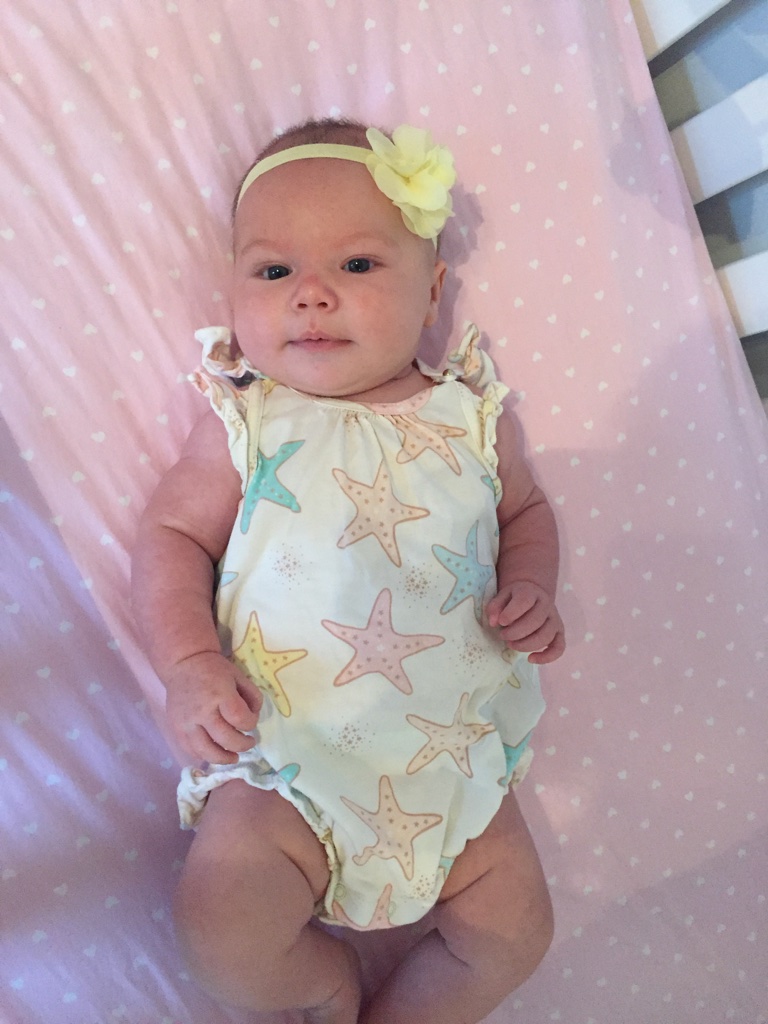 The reason why it takes me forever to get in the car and go anywhere. Lucy had to buckle her stuffies into the front seat first. 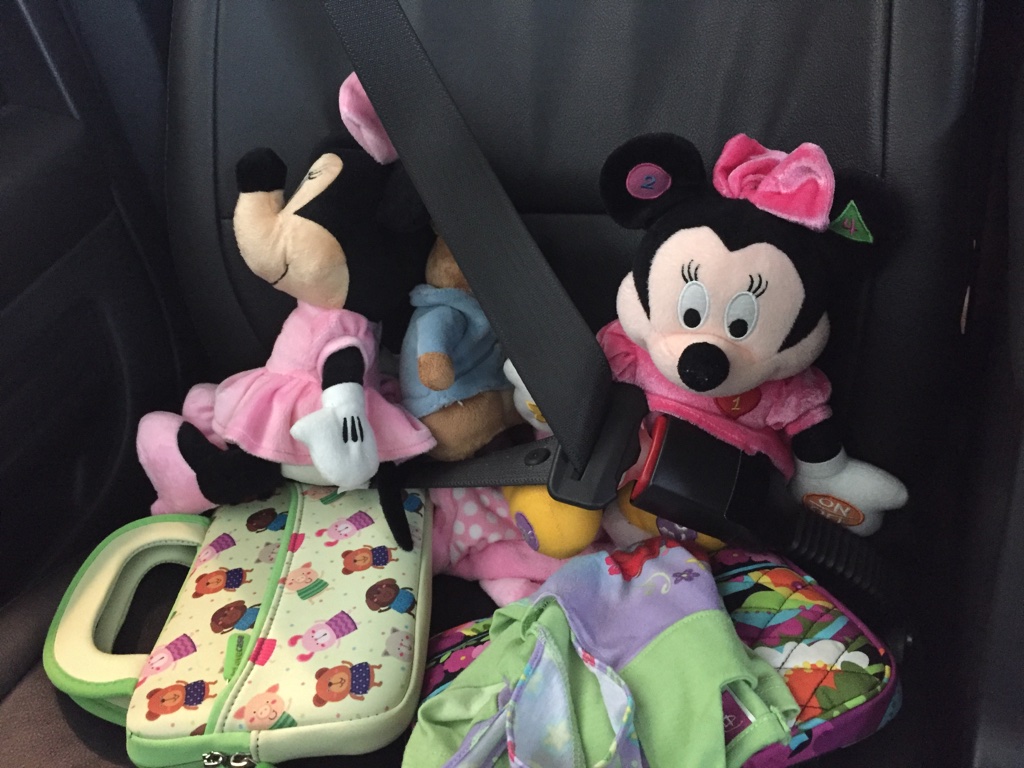 On Friday, my mom and I took the girls to the Trenton Art Fair. I LOVE street fair season, but this may have been my first and last with the girls. It was hot, it was a lot of work, and the constant in and out of the stroller on Lucy’s part was driving me batty. Stay in . . .stay out . . . I don’t care, just pick one!! Despite all of that, though, we did manage to find some super cute things! 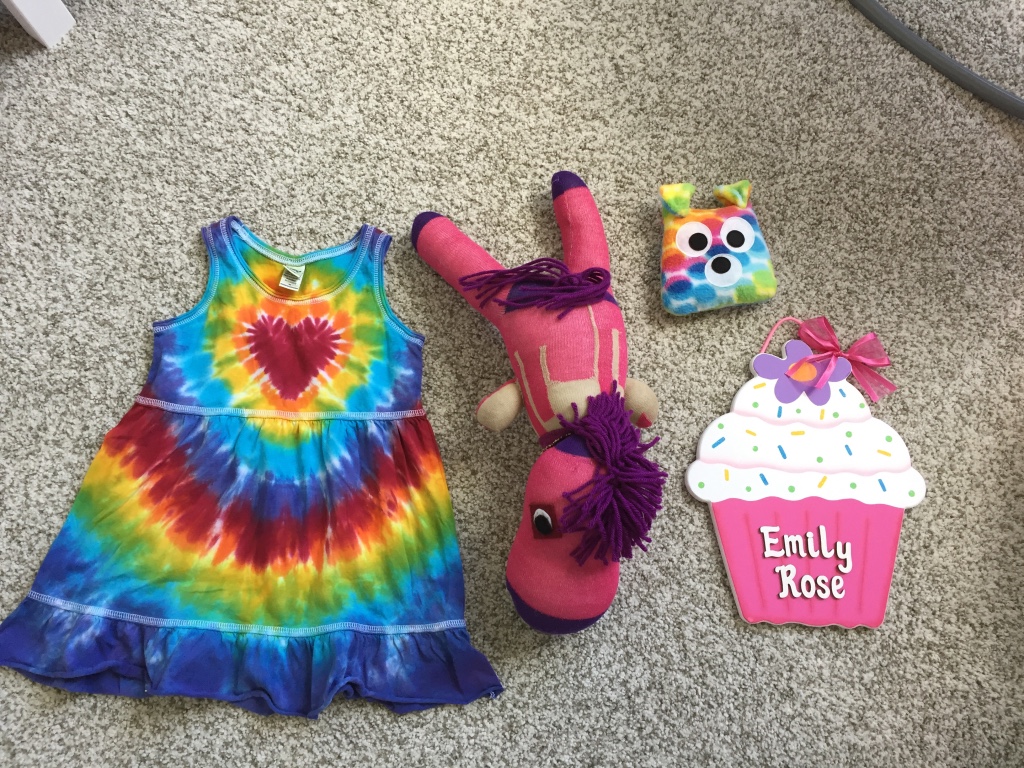 Two years ago when I took Lucy to her first street fair, I got a purple cupcake for her room. I was thrilled to see the same artist at the Trenton fair, and they had a pink cupcake for Emily’s room! 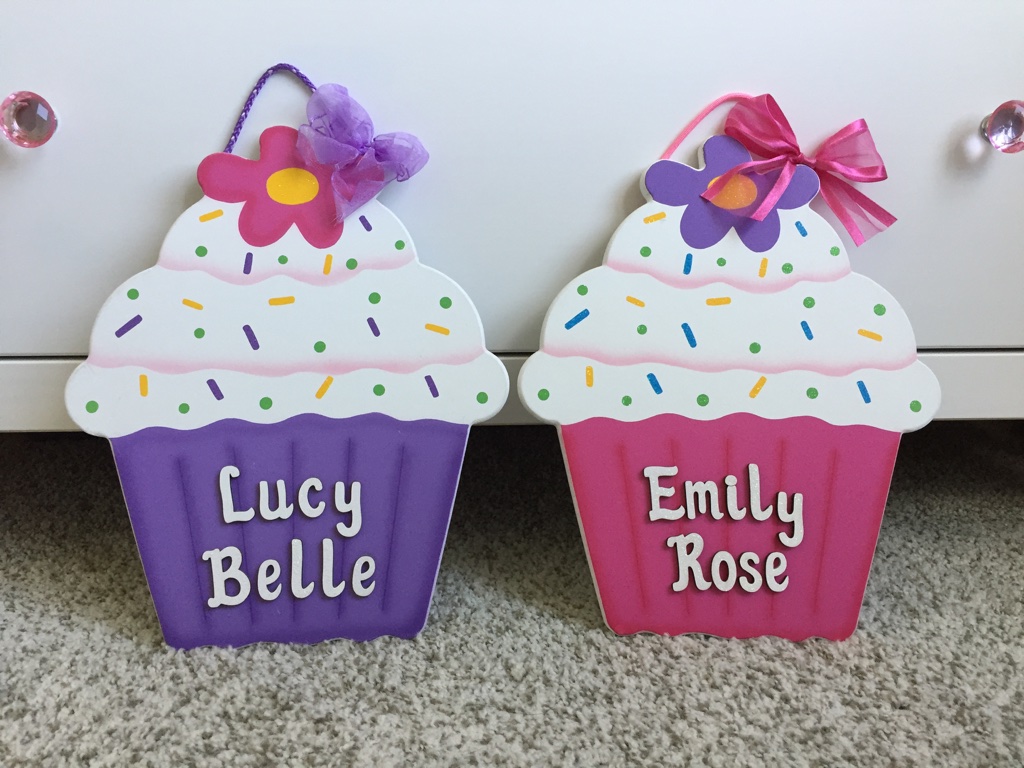 We walked past this dog made from fake grass in front of a vet’s office, and Lucy loved it. 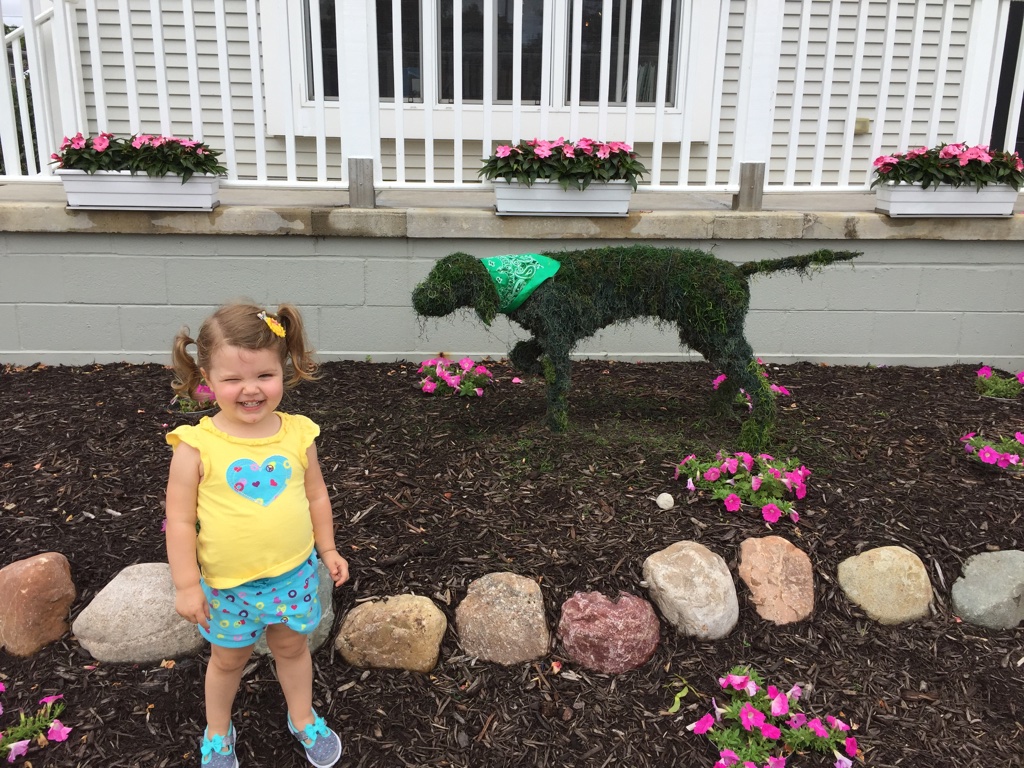 After the fair we played at my parents’ house for a bit and then loaded up to drive home. I was positive Lu would fall asleep since it was way past nap time and we’d had such a busy day. I was wrong. She was awake and FUSSY. Nothing made her happy. She kept “dropping” her toys and wanted me to pick them up for her. She let out a super loud scream that woke up Emmy . . . who then started crying. At one point we were on 275 and Emmy was crying because she had been woken up, and Lucy was crying because she didn’t like what I had on the radio. My patience was gone, there was no reasoning with her, and there was nothing I could do except turn my music up louder and ignore both of them. #motheroftheyear  Have I mentioned that I’m not doing any more street fairs with them??
Once we got home and got everyone settled and happy, I decided to pop open one of the raspberry beers Matty had gotten for me. It was delicious! . . . and definitely deserved! 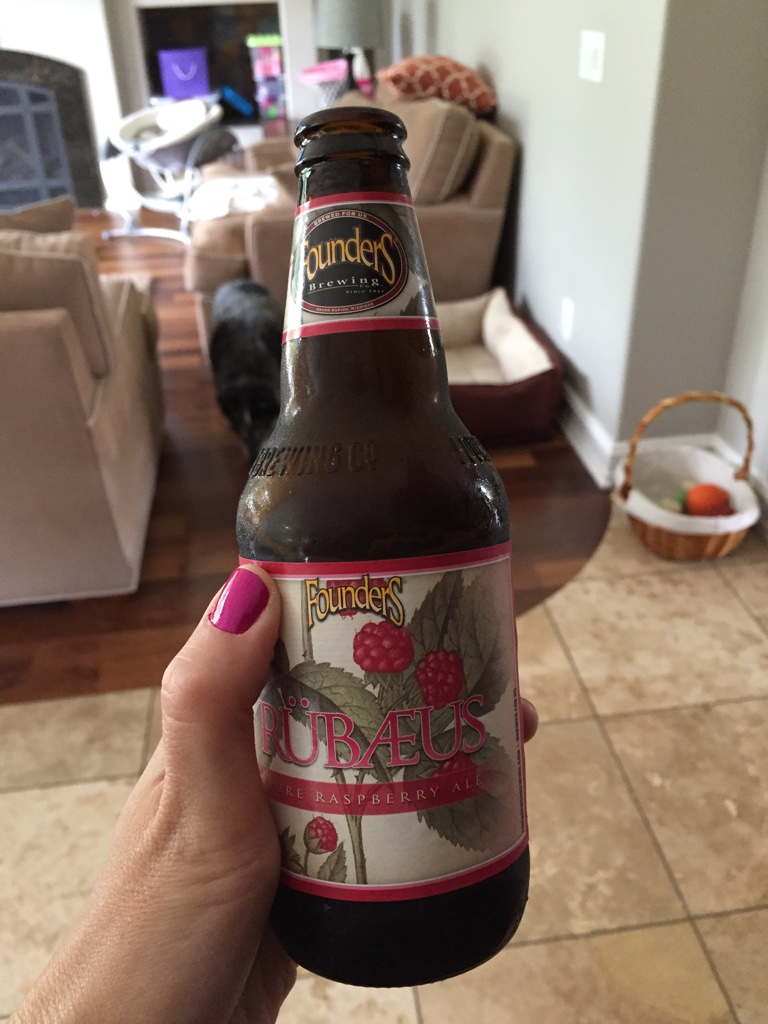 I put a lullaby show on Netflix, still clinging to the idea that Lu might snooze for a bit, but it didn’t work. 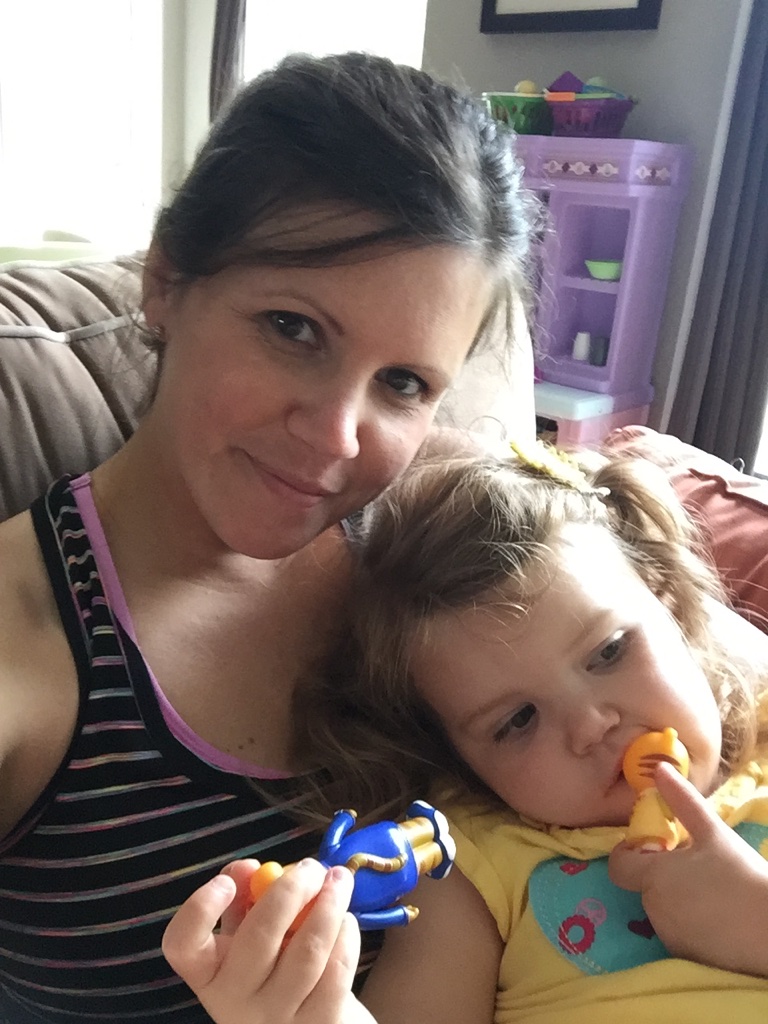 Instead she asked to hold her sister! 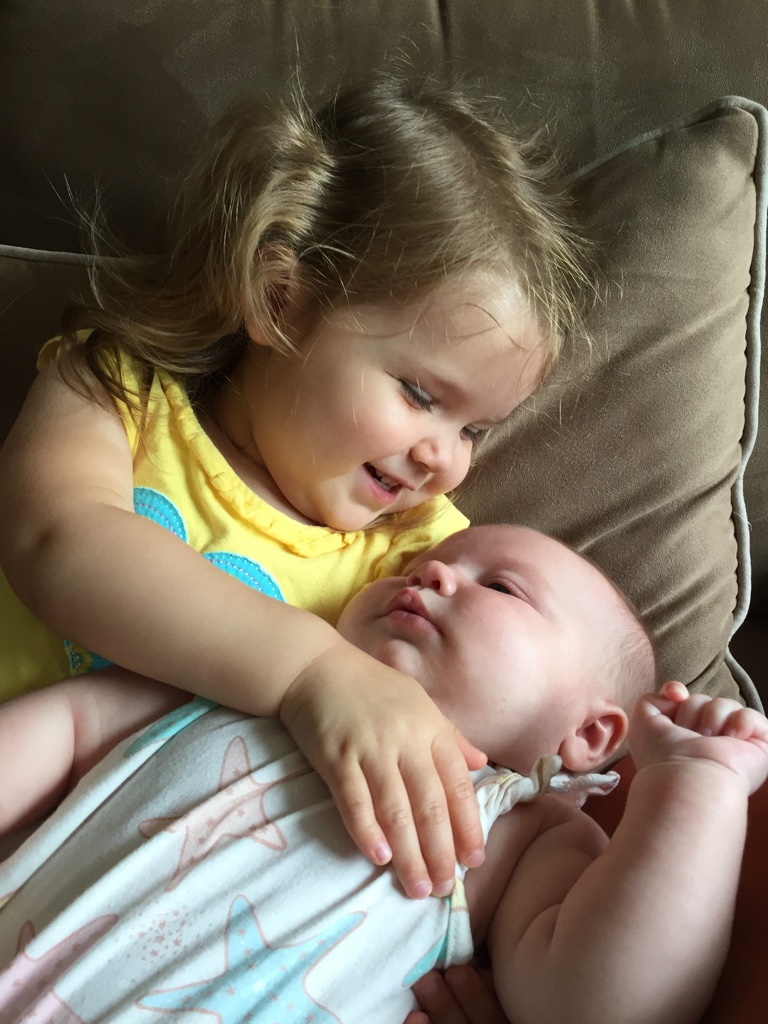 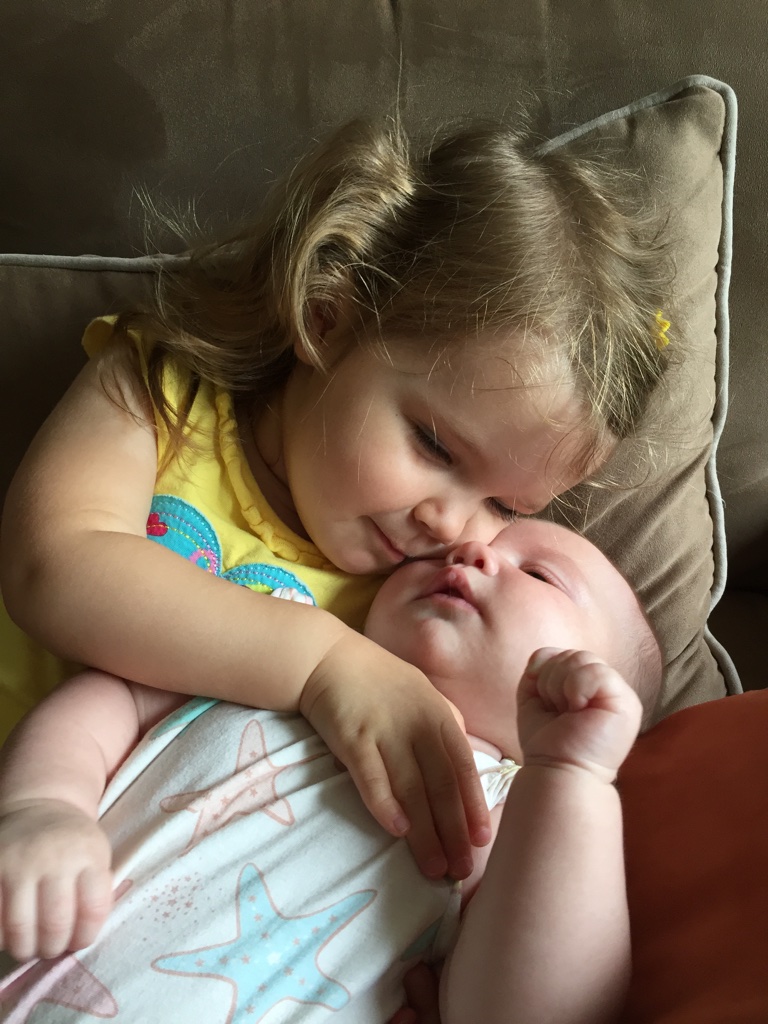 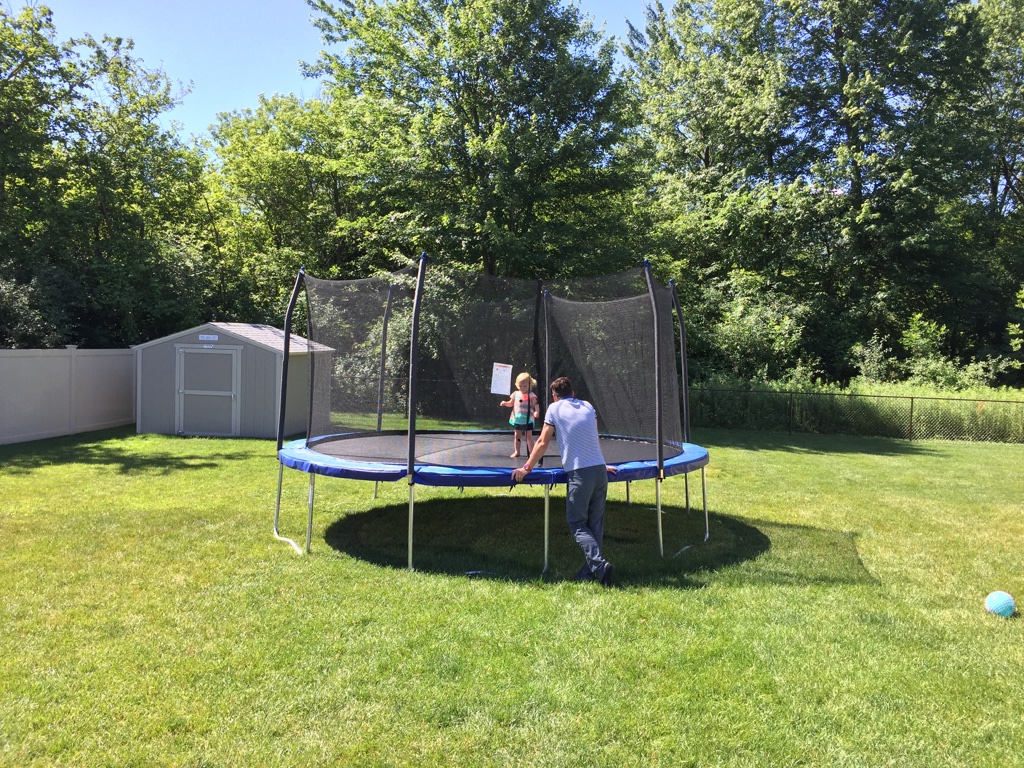 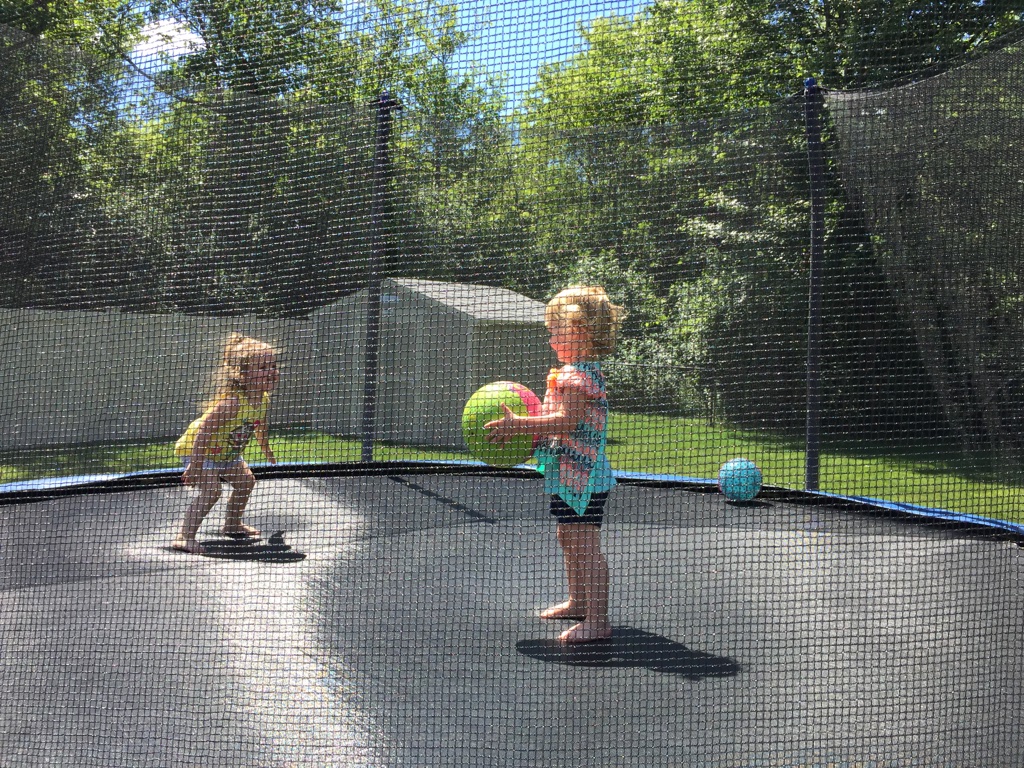 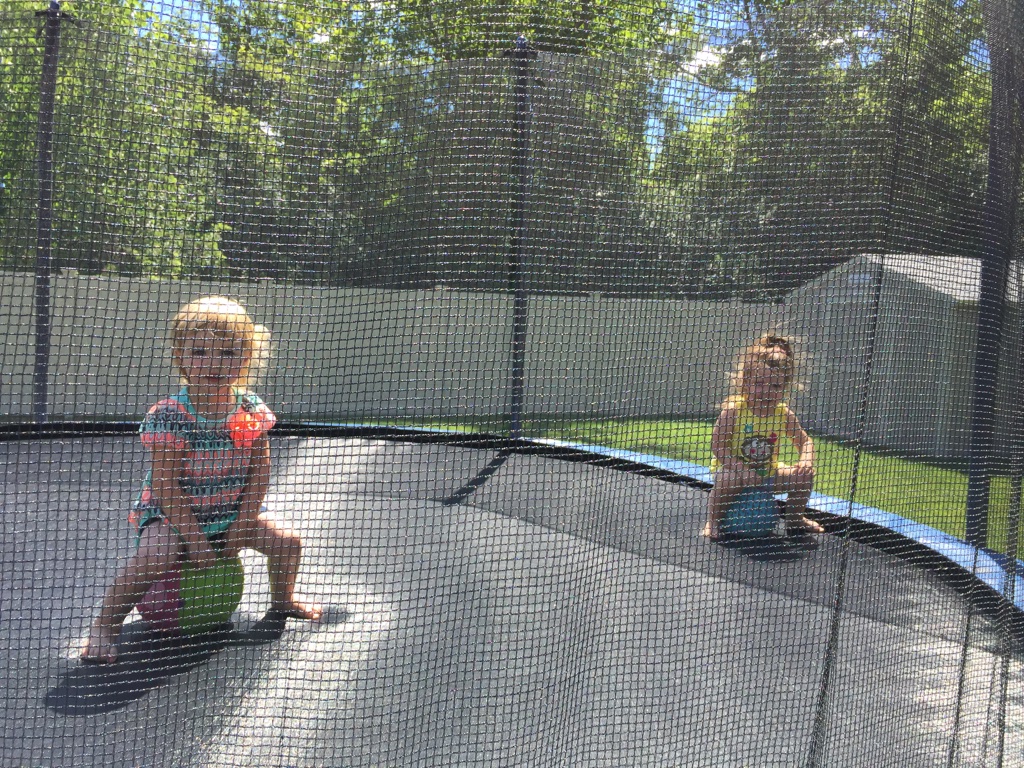 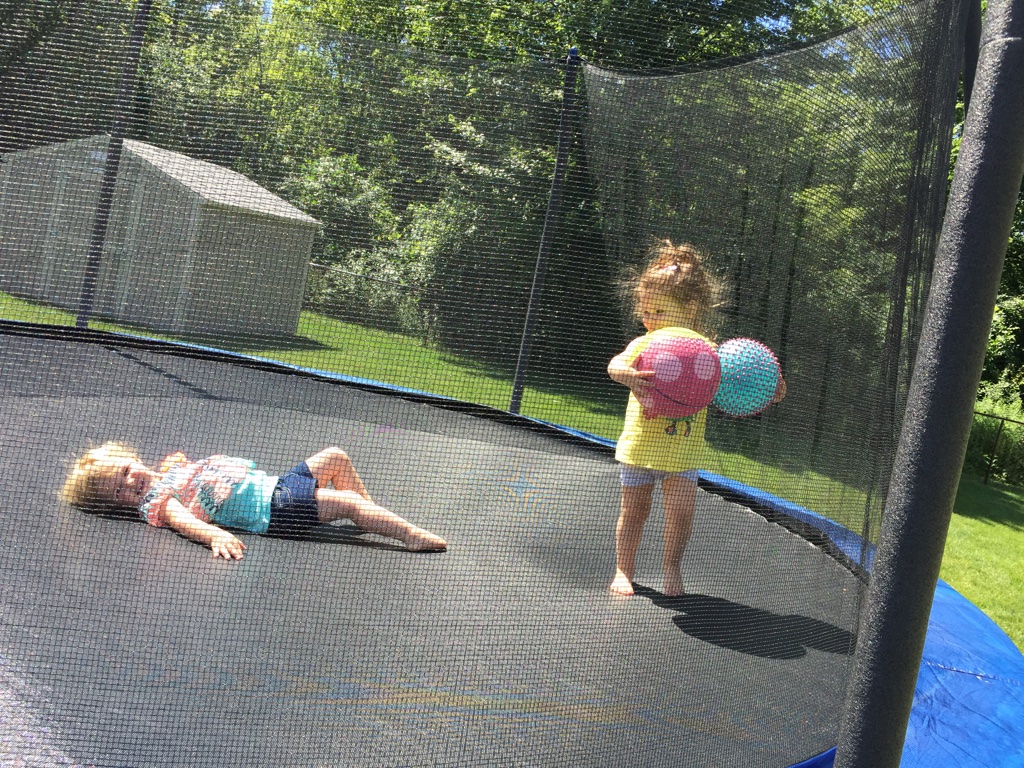 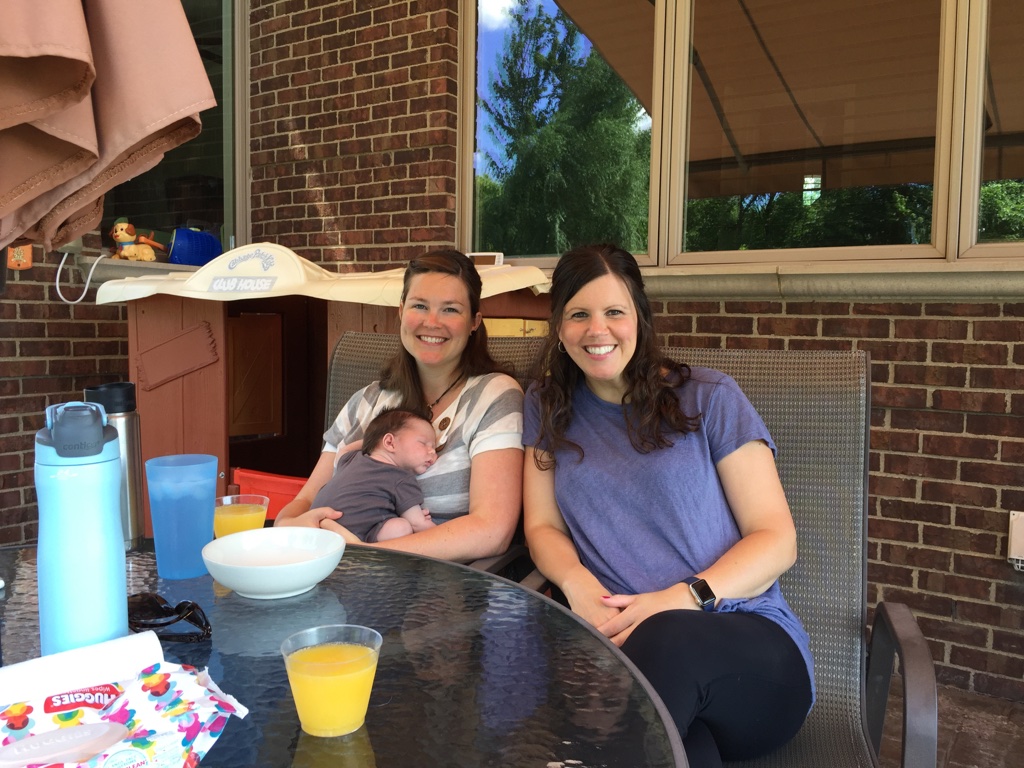 . . . and holding babies! Matthew and Nicole have Ella, who is Lucy’s age, and they just welcomed baby Oliver two weeks ago! 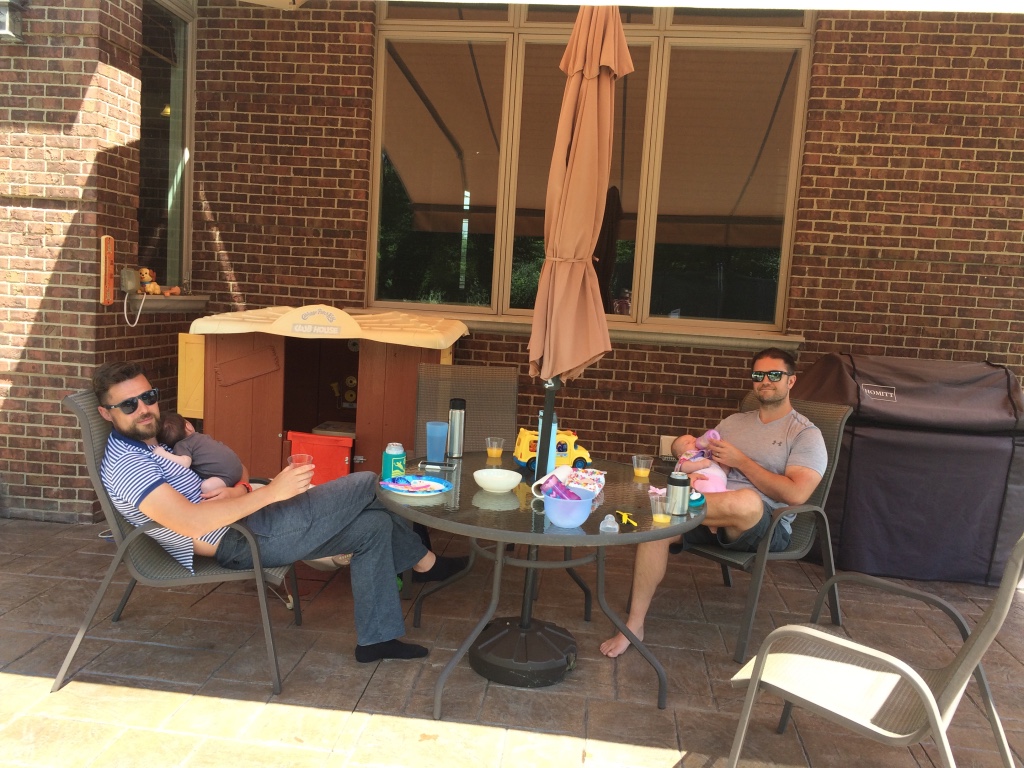 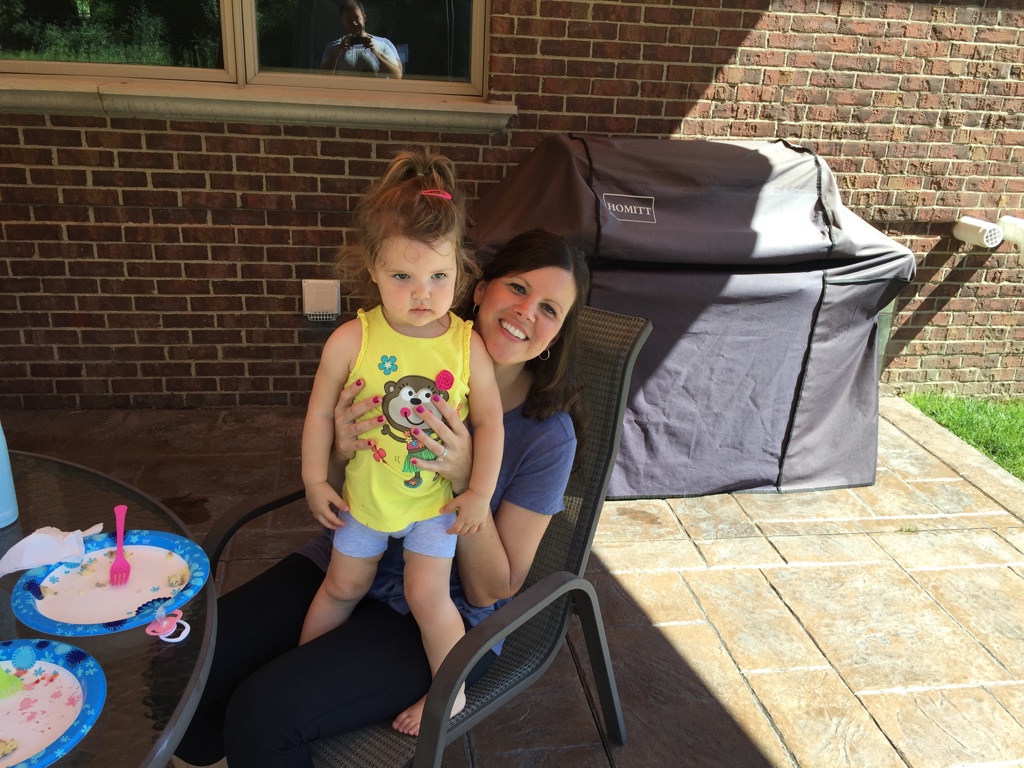 Lucy played hard, and was getting tired toward the end of the visit. She had a bit of a meltdown when Ella wanted to play with the bus too. Matty gave Ella the airplane instead, but Lu wasn’t having it. 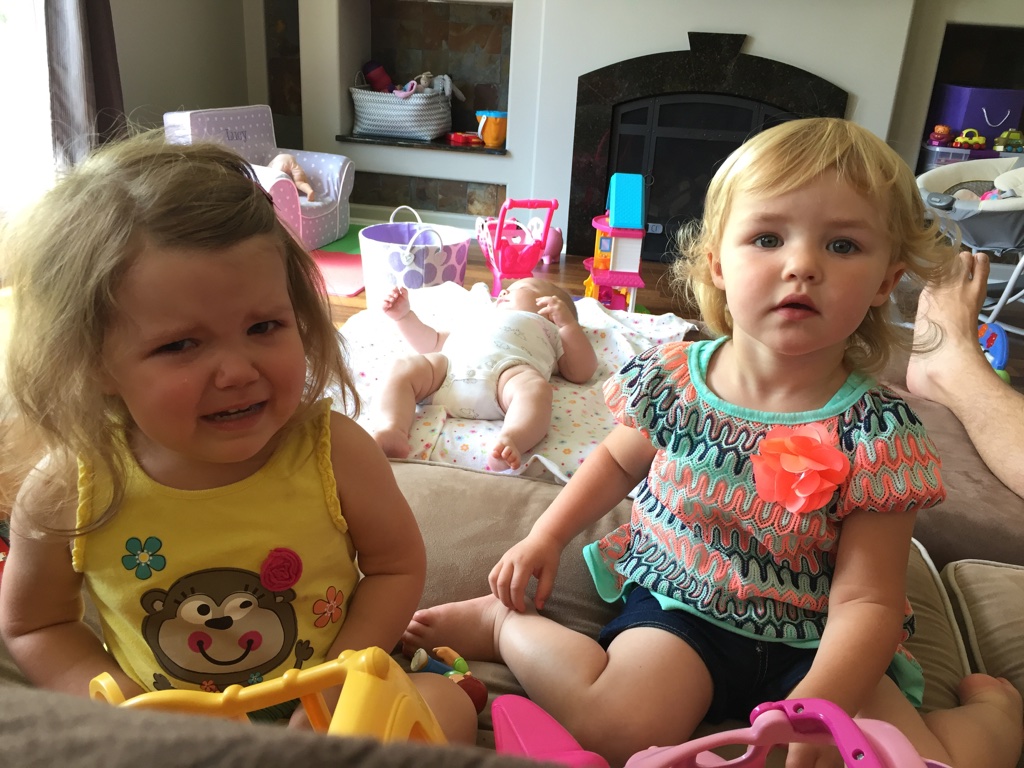 It it just me, or do they look like twins? 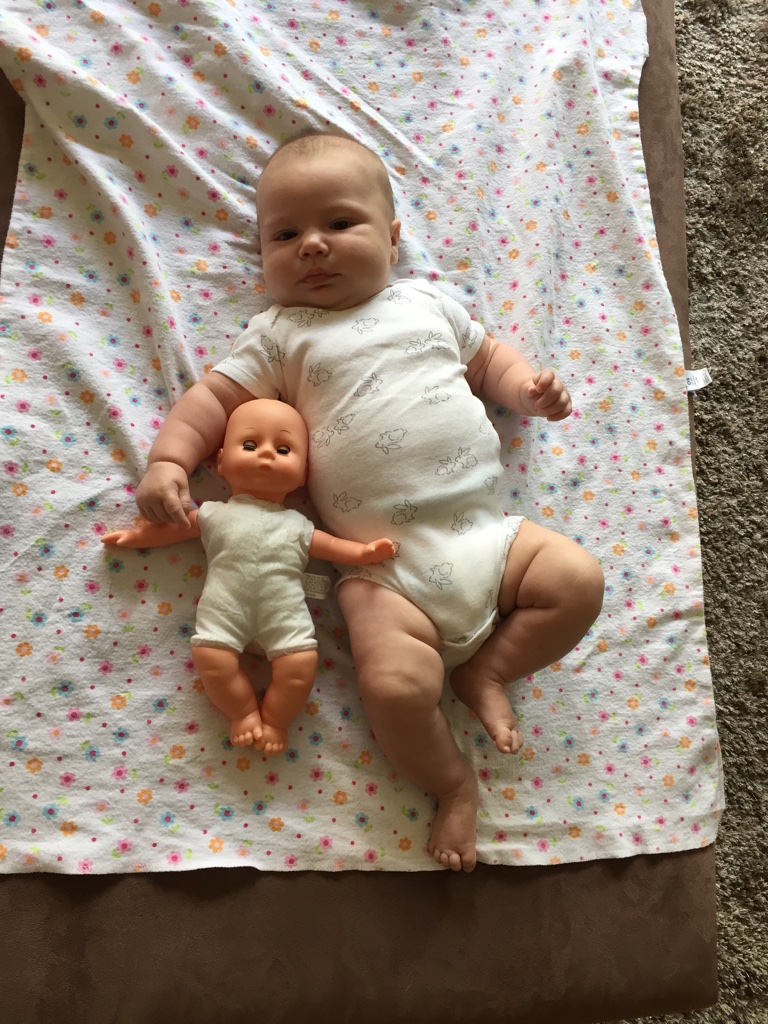 We had an impromptu date night Saturday evening while my parents stayed with the girls! It was a beautiful night, and we ate outside at Cellar 849. Delicious food and pizza! 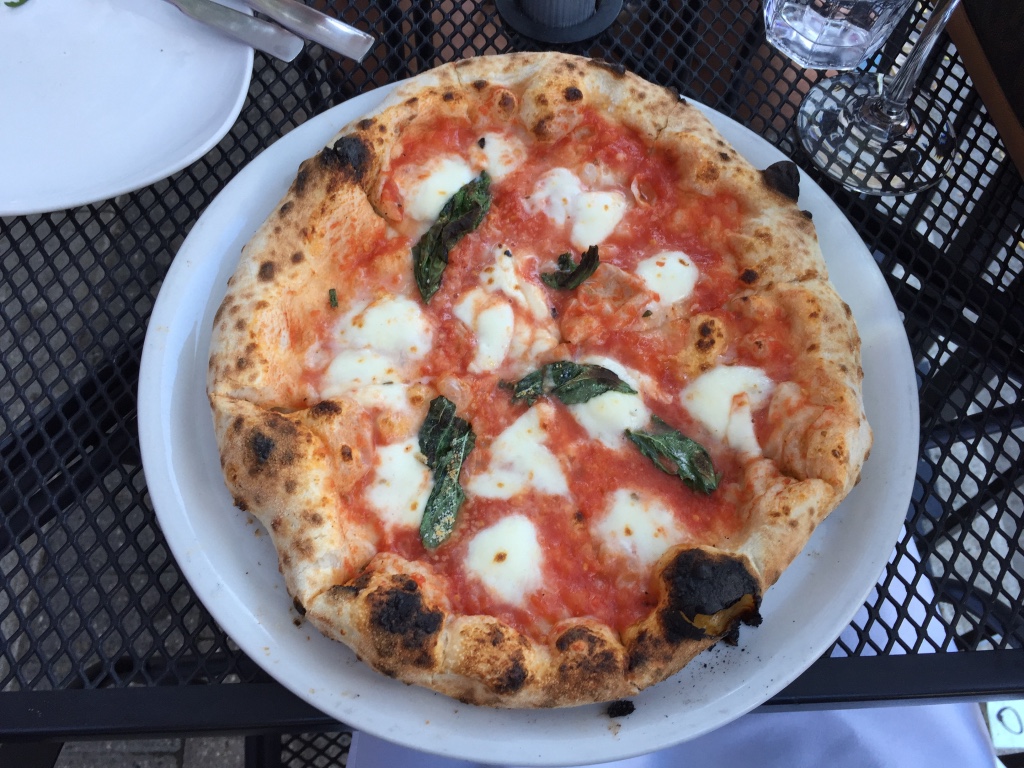 Matty had Lucy’s bike inside on Sunday morning to fix something on it, and she had a great time riding her stuffies around the dining room. 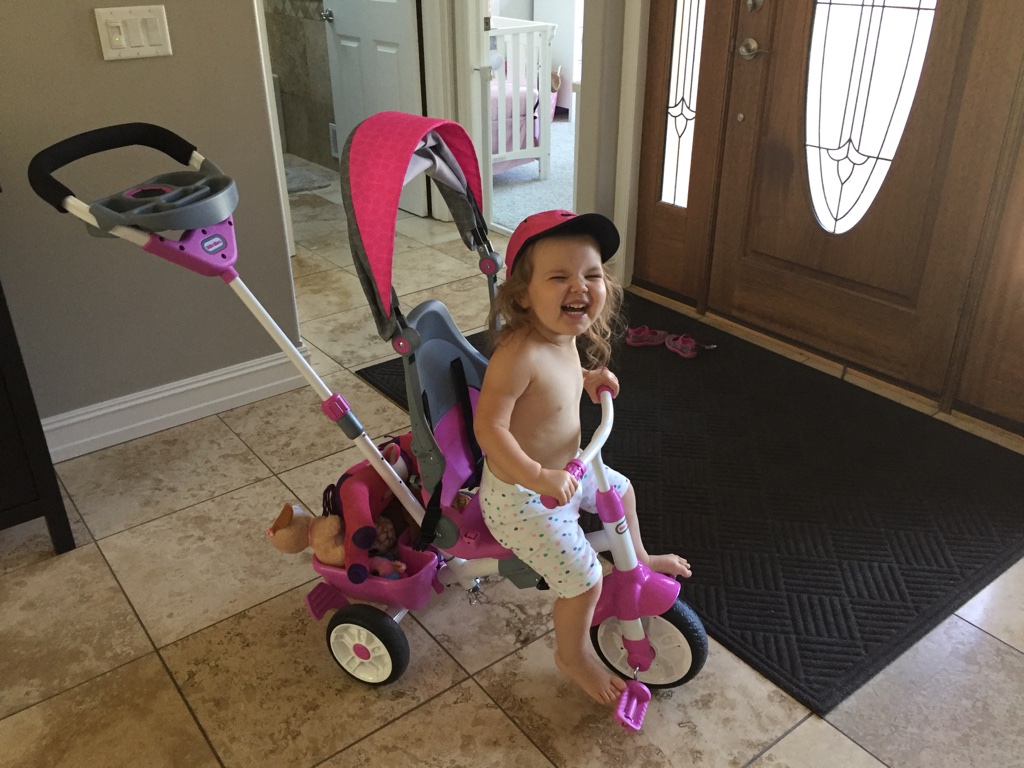 We finally convinced her to take the bike back outside. She is SO CLOSE to being able to pedal all on her own. 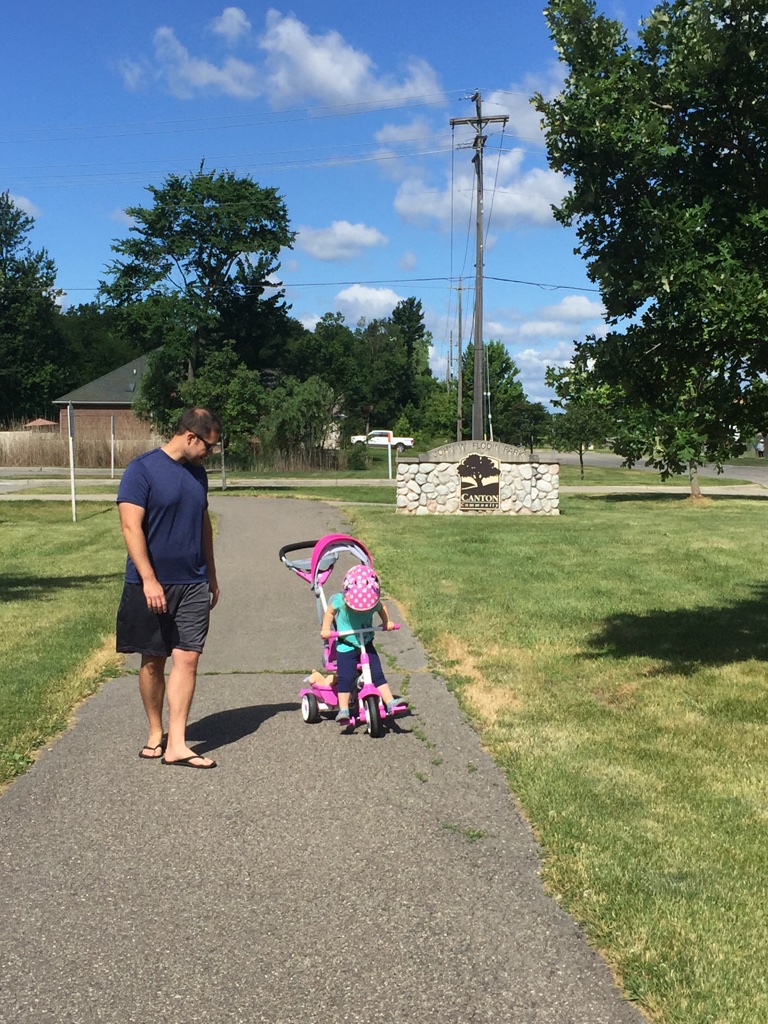 Carla sent me this picture of the kiddos. They went to West Virginia for the weekend to visit her family. Right after she sent it, Matty and I were discussing whether or not it would be polite to ask Carla if her family lived on a compound. But then she sent an additional text explaining that they were visiting a historical fort. haha 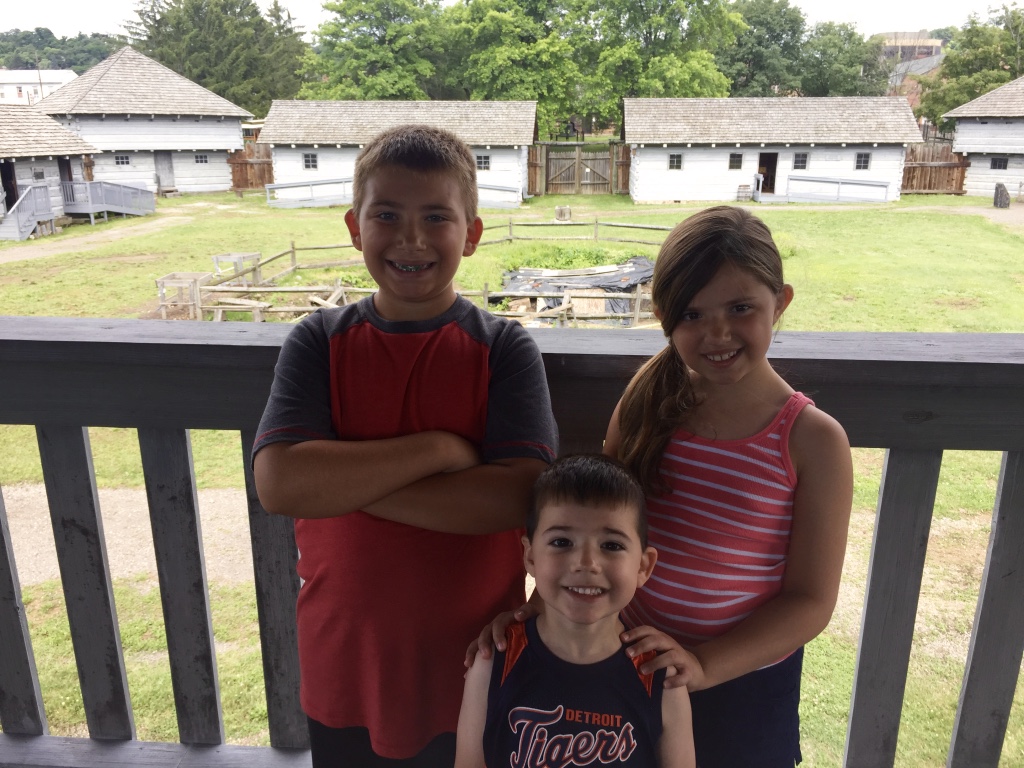 And in the BIGGEST news of the weekend . . . we are getting a new niece on Monday!! Matt’s sister, Sarah, is scheduled to deliver her baby girl at noon on Monday, and we are so excited! Obviously, I wish we all lived closer together all the time, but it’s times like this that I REALLY want to be able to just pop on over to the hospital and hold my sweet new niece . . . without having to endure a six hour drive first!
Have a great week! I’ll be spending it preparing for our Fourth of July cottage trip. Yes, it takes me all week!
XOXO