Since I’m slowly getting back into the blogging world, I thought I’d do a different kind of update. Here are three things about each of us right now.
Matty
1. Golf league started up at work, so every Tuesday evening Matty has the night off to play golf with his coworkers. He really enjoys it; I tolerate it 😉 Prior to kiddos, I’d get together with the wife of his golf partner and we’d do dinner and drinks, mani/pedis, or a workout class. Ha! This year we will get together for playdates with our girls instead. 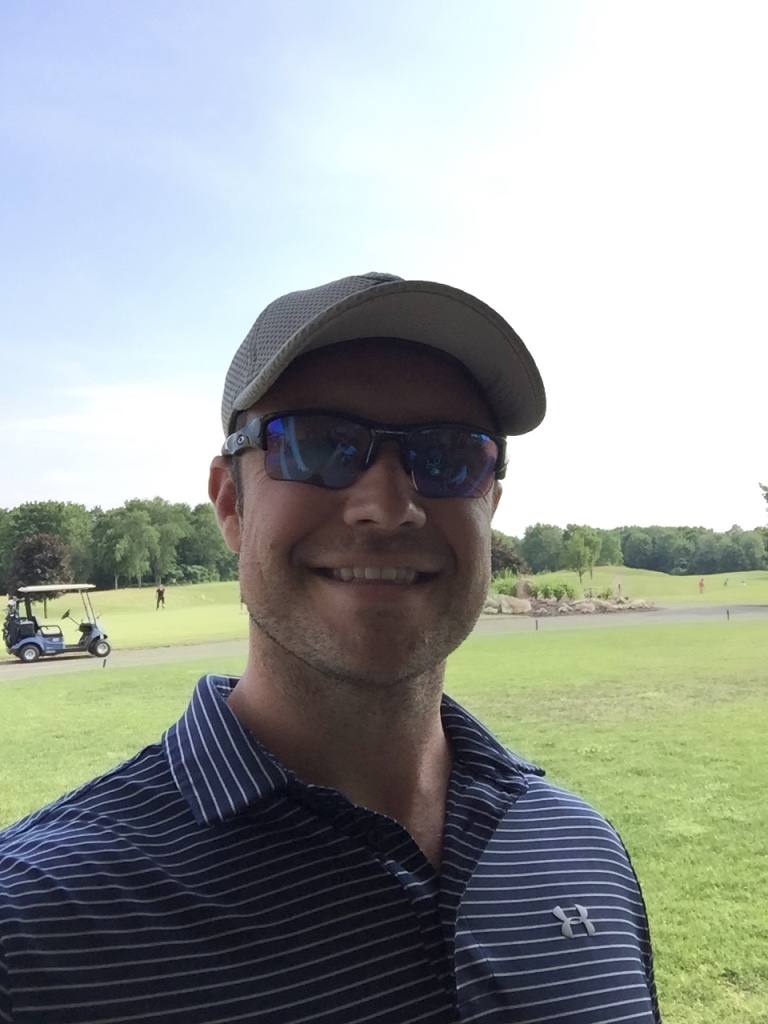 2. It’s lawn season, and Matty isn’t messing around. He has declared this “his year,” and all of his prep work from last year is paying off. He cuts, he fertilizes, he does different patterns, he probably even gets down and whispers words of affirmation to the individual blades of grass. Whatever he’s doing, it’s working, and several people have stopped to tell him how good the lawn and house look.  A picture would require me to get off the couch, go outside, cross the street, and snap the pic. #nothappening
3. Matty has been Super Dad with Lucy since Emmy has been on the scene. Obviously, he was great with her before Emmy as well, but now he basically spends all his time with Lu from the minute he gets home until he puts her to bed. Lucy is so happy to see her Dadu when he comes home each day, and she immediately wants to tell him about her day and start playing. It’s the sweetest thing ever. These girls are so lucky to have Matty as their daddy . . . even if his idea of a field trip is the walk in cooler at Holiday Market. 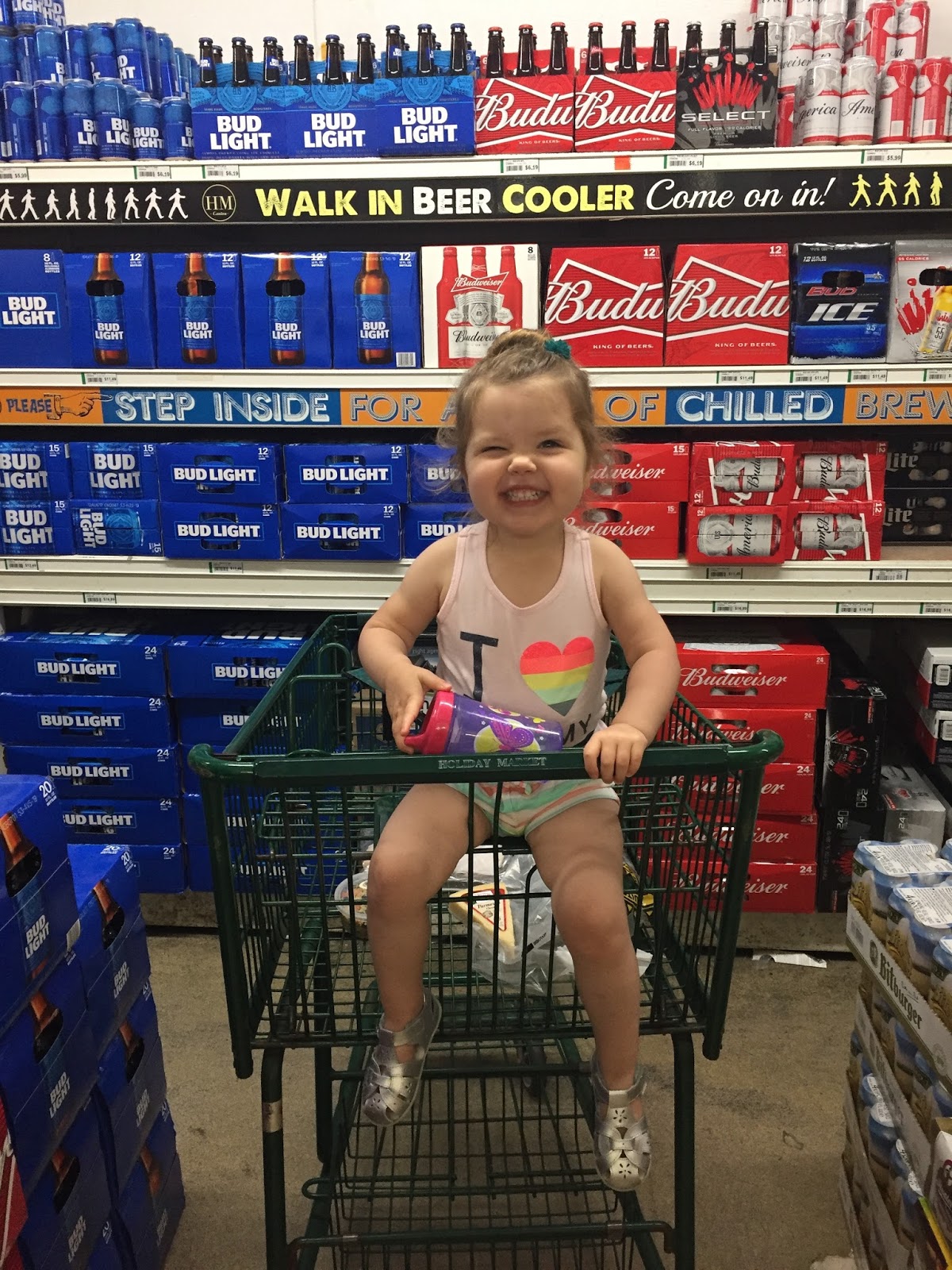 Molly
1. I’m starting to feel like a normal, functioning human being again. There were some dark days during her first eight weeks, but Emmy seems to be calming down and settling into some sort of a routine. This means that for the past few nights, I’ve had about an hour or hour and a half of “me” time before it’s time to head to bed. Yes, a good chunk of that is still spent cleaning up from the day and prepping for the next day, but at least I’m doing it at my own pace and not trying to hurry and finish while Matty’s holding the crying baby. Oh, and I’ve also had the chance to sit and watch tv fall asleep on the couch with Matty. (Update: I started writing this post several days ago. Since then, Emmy has regressed and is not going to bed so easily. #ugh)
2. After I had Lucy, the baby weight just fell right off plus some extra weight as well. I have not been as lucky with the weight I gained from Emmy’s pregnancy. Due to the fact that I had Lucy to take care of, I wasn’t able to work out like I did with my first pregnancy, and I certainly haven’t been able to work out since Emmy has arrived! Matty has been following an NS/NG (No sugar, no grain) diet for awhile now, and I’ve decided to join him. I don’t miss the grains as much as the sugar. I can put away a bag of chocolate chips like nobody’s business, and it just seems wrong not to get up and start my day with something sweet. So now I allow myself to have some sweets on Saturdays and limit the rest of my sugar intake as much as possible. It’s hard, but I’m managing.
3. I can’t think of a third thing! I sure do love spending time with these little ladies, though! 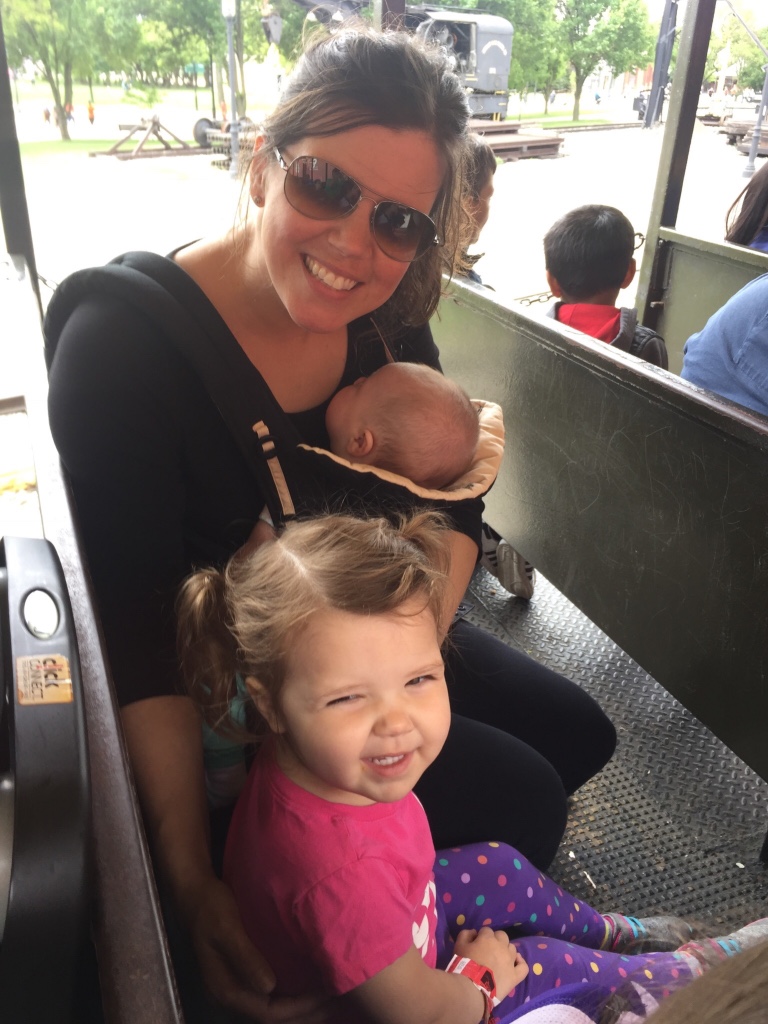 Lucy Belle
1. Lucy’s vocabulary and conversation skills have skyrocketed over the past month. The things she says constantly amaze us/crack us up. A few weeks ago we were eating dinner, and I was joking with her about something and Lucy said, “Ok momoo, that’s enough!” She is a parrot and a sponge in that she hears and repeats everything we say, so it’s time to start monitoring our conversations!
2. She is officially a water baby! Whether it’s her kiddie pool, water table, sprinkler, the lake, or Pop’s pool, Lucy wants to be in it and playing. She has no fear, which is not always a good thing! The other day she even went in the pool with Aunt Carla and Pop instead of Matty or me. That’s another big milestone! 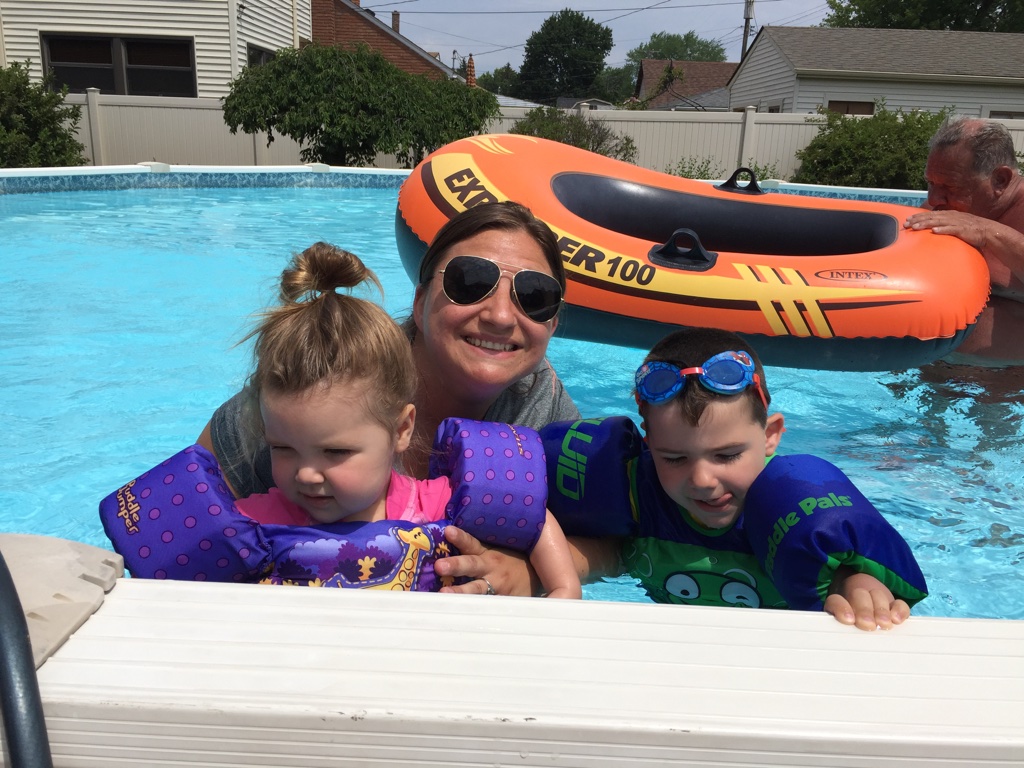 3. Lucy has been doing a lot of independent play lately, and her imagination is running wild. She’s been obsessed with playing with her Little People and a school bus and airplane that she can put them in. I love to sit on the couch and play with Emily and just listen to Lucy play. The songs she sings and conversations she makes up with her toys are priceless. 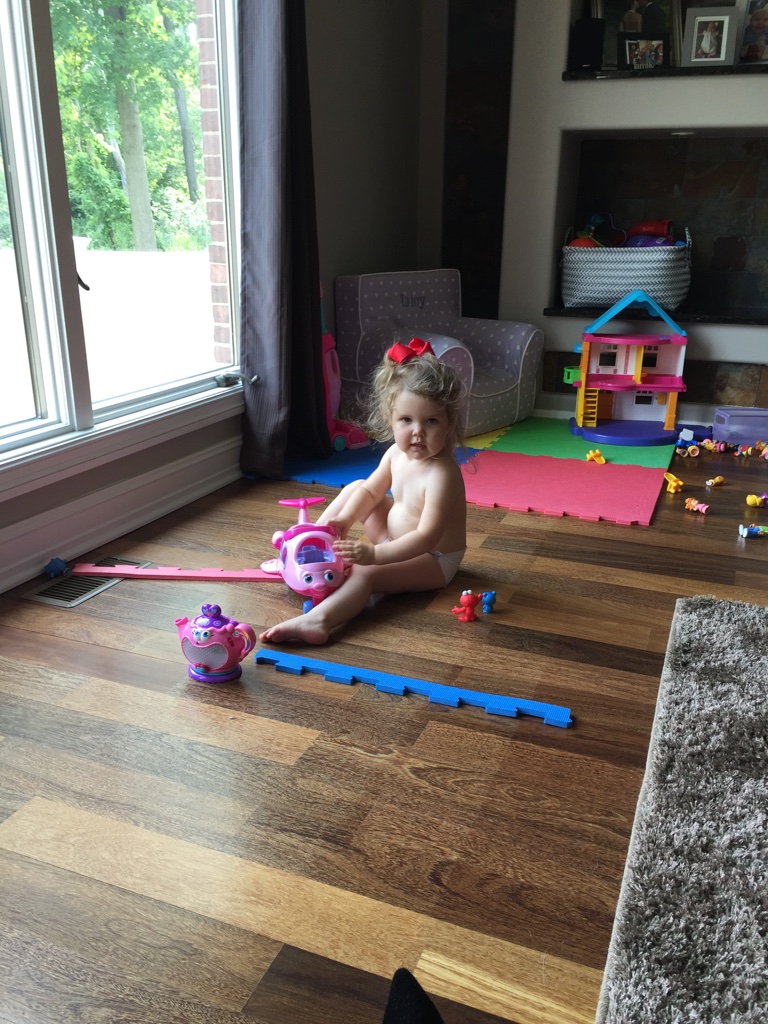 Emily Roses
1. She is starting to sleep for 5 and 6 hour stretches at night! (Update: Sometimes)
2. Emmy is starting to smile and coo, and it is the cutest thing. She looks up at you and her eyes light up, and she gives the sweetest little smile. 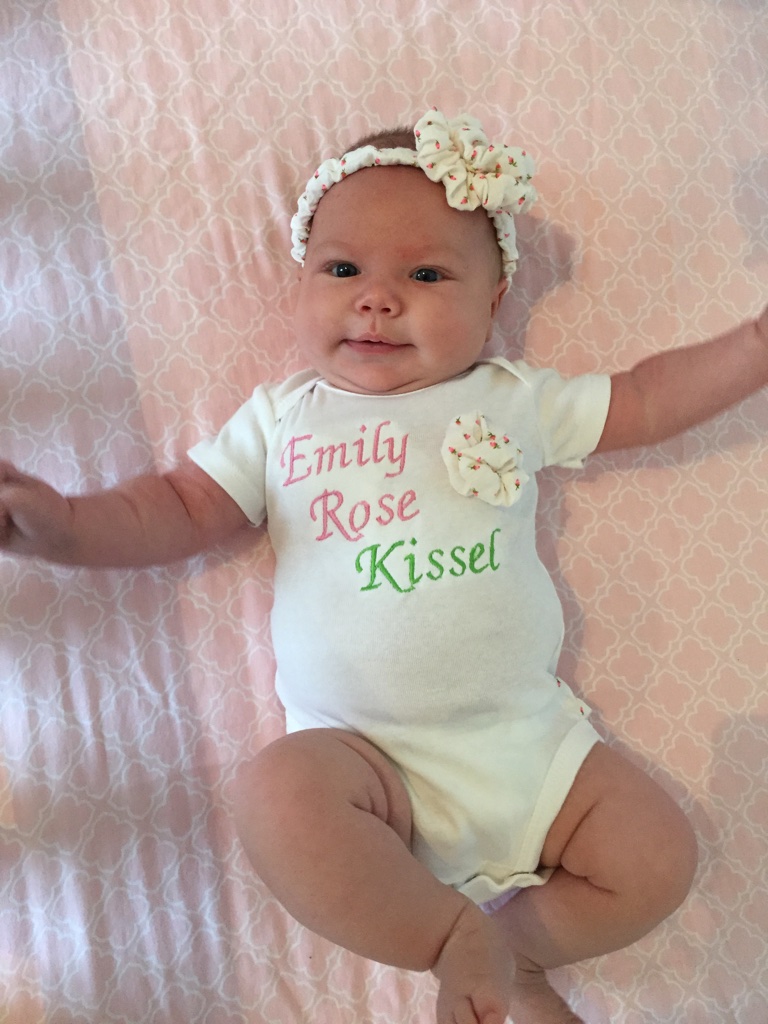 3. She’s growing up so fast! She’s lost her newborn cry and has developed the saddest little “real” cry, which accompanies the saddest little lower lip put I’ve ever seen. She looks like a baby now instead of a newborn, and is wearing the clothes of a 6 month old. She is most likely our last baby, and I am trying to soak up every little bit of her baby-ness that I can.
4. A bonus fact for Emmy! She loves the Ergo carrier, which has made my life much easier. I don’t know how I’d chase Lu around the playground if I had to maneuver a stroller everywhere. 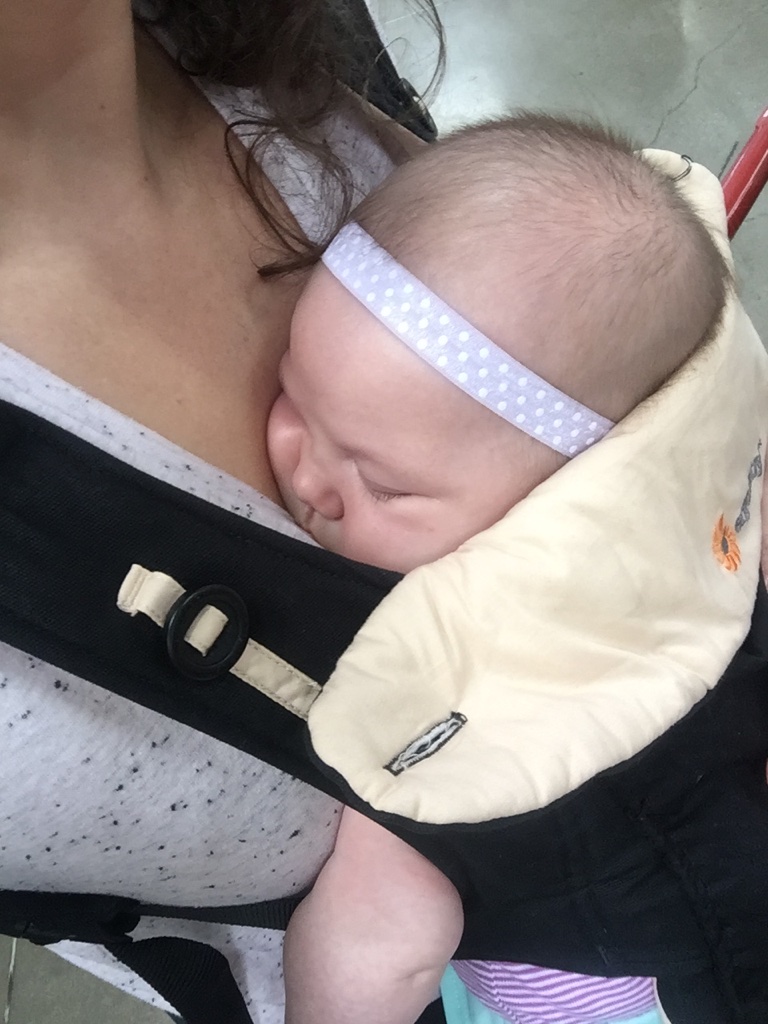 Hope you enjoyed the update!
XOXO