It doesn’t get much better than that!
On Saturday we went to my parents’ pool for the first time this year, and Lucy made herself right at home. She started out clinging to Matty a little bit, but after she got comfortable she was kicking around all on her own . . . with the help of her puddle jumper and a pool noodle, of course. 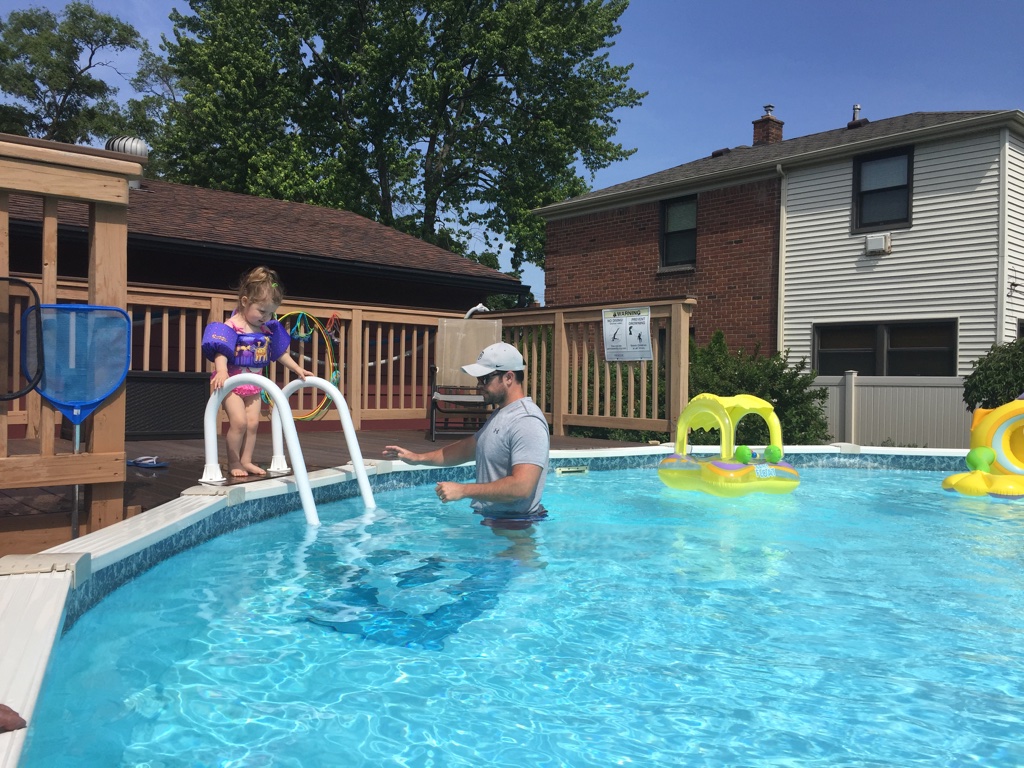 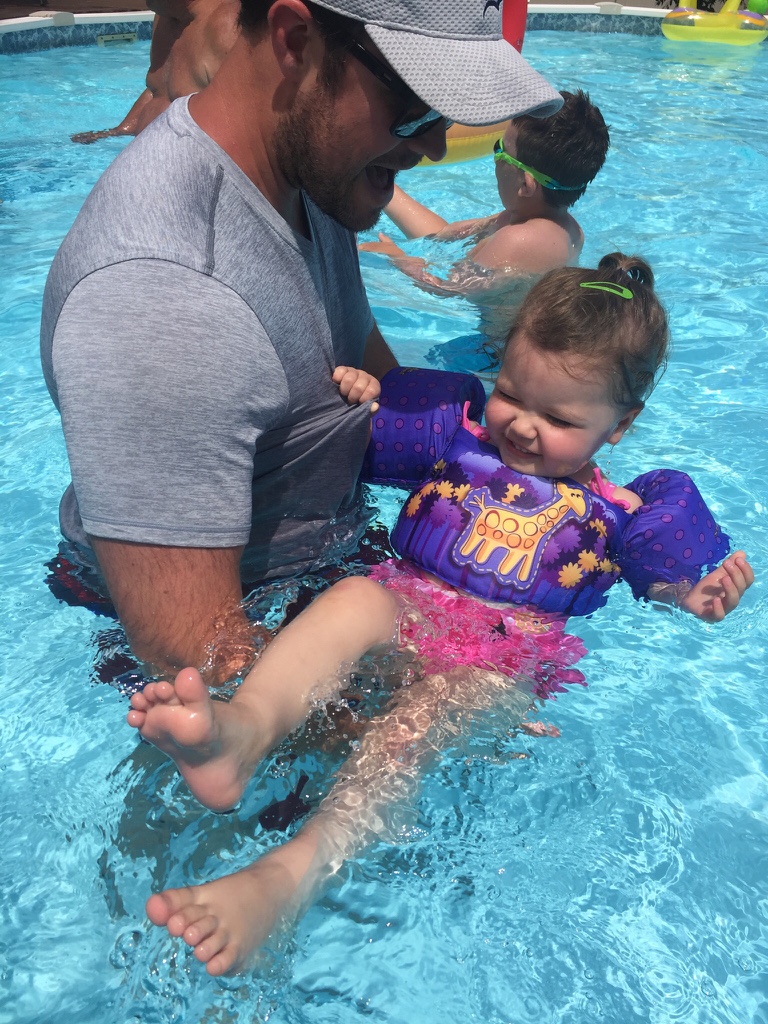 My new favorite picture of these two! 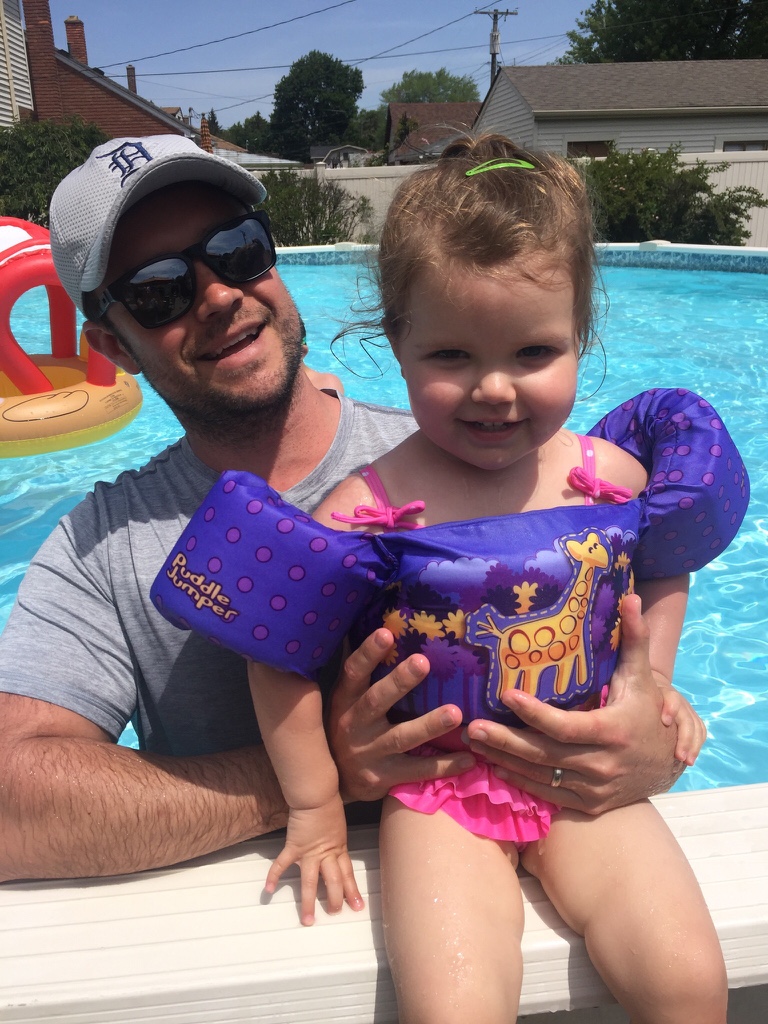 Floating around all on her own! 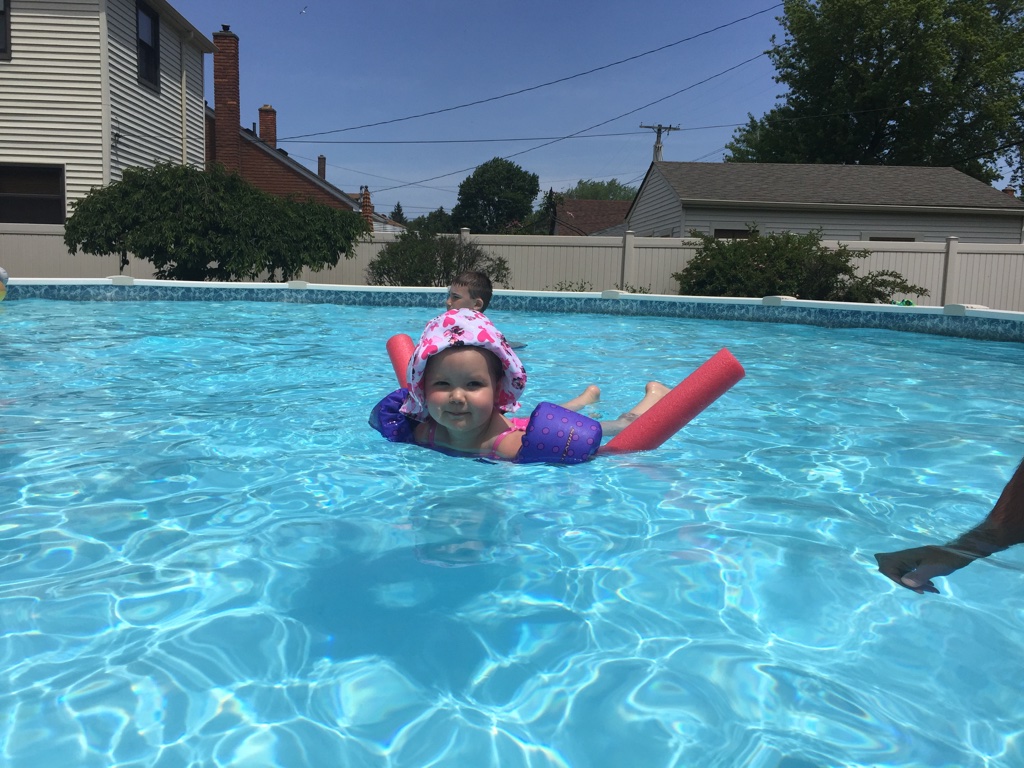 Andy and Sadie love the pool! 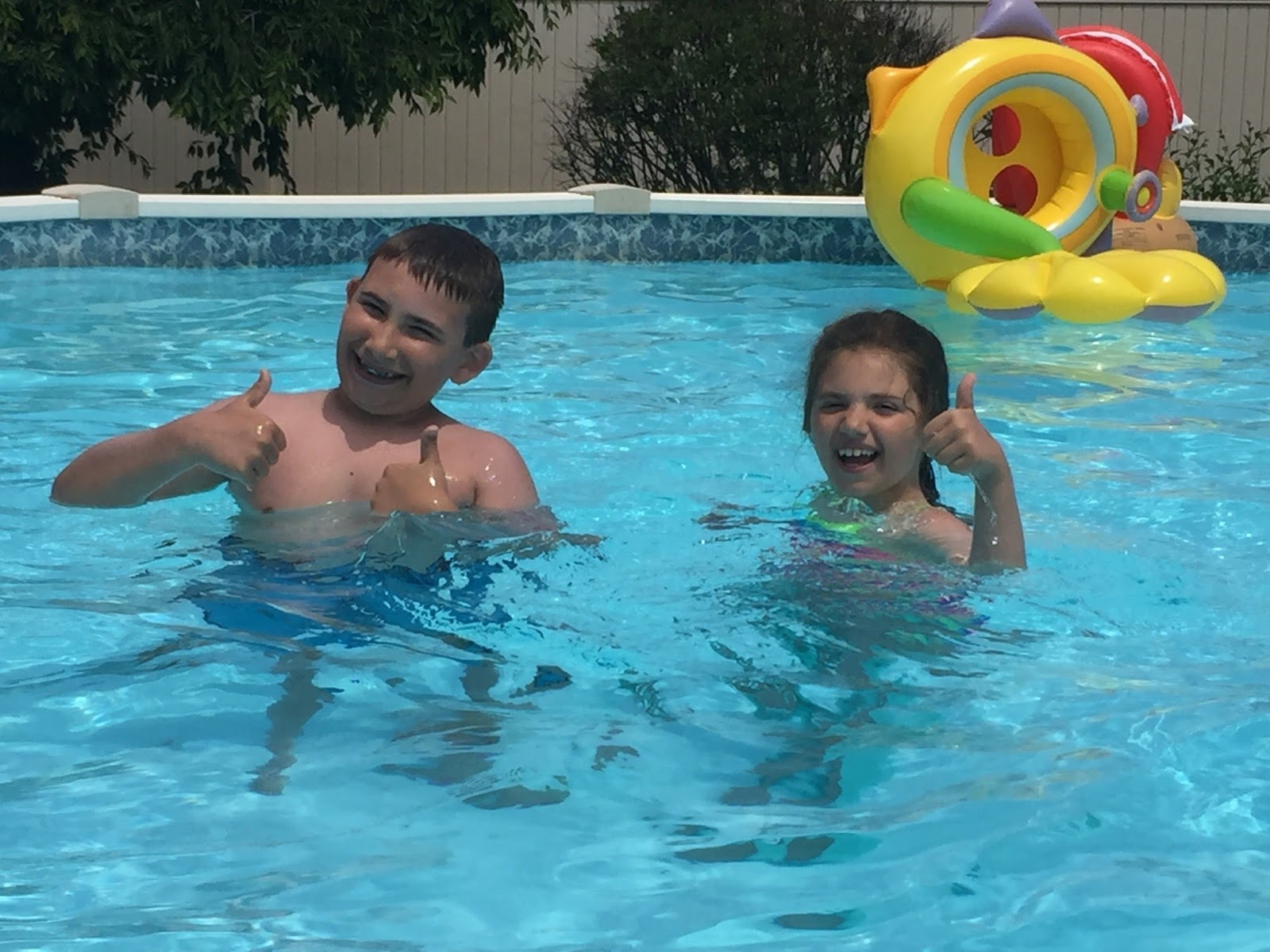 Gordie enjoyed jumping off the ladder into Papa’s arms. Lucy will be doing that before we know it! 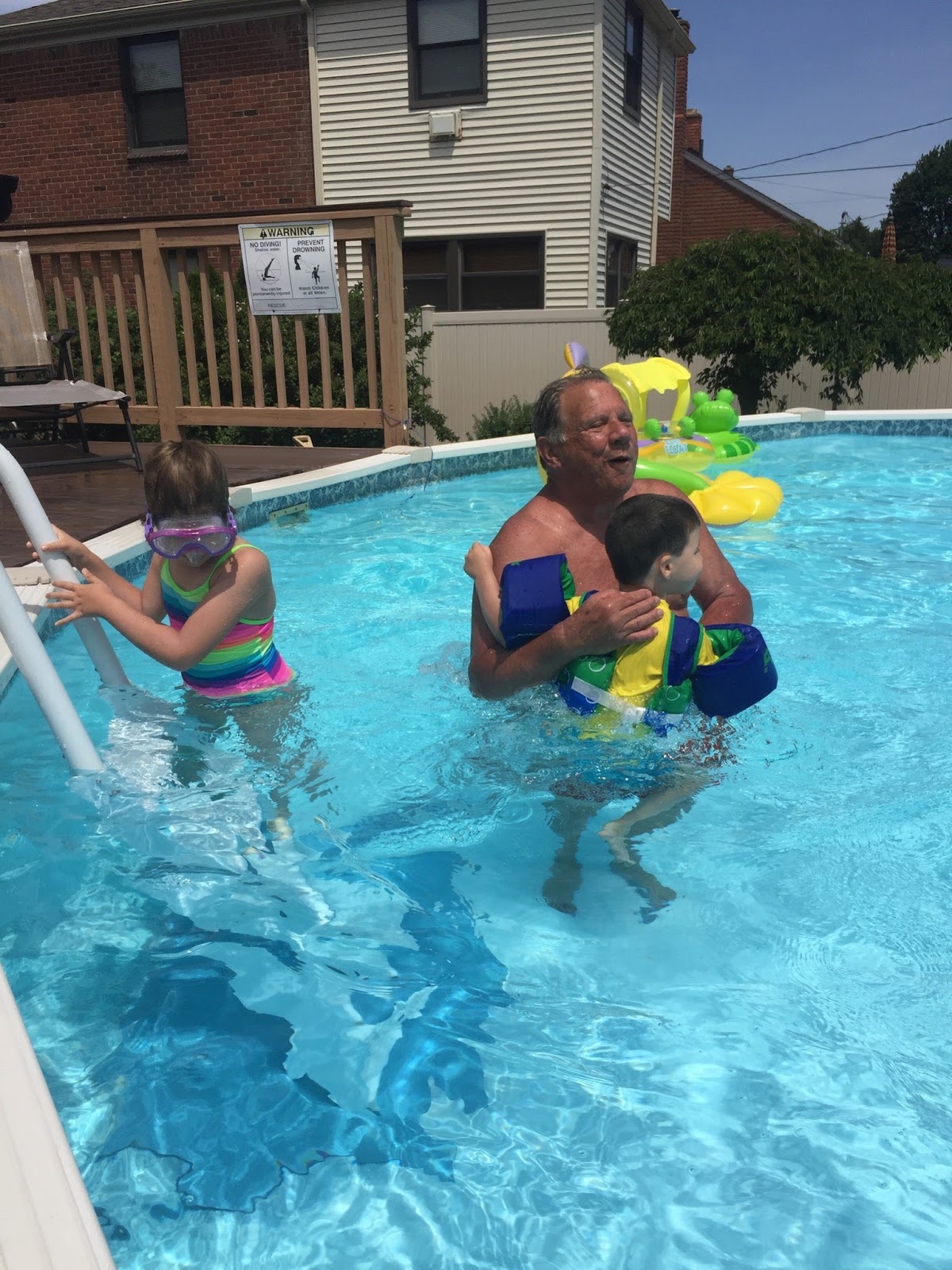 Showing off her swim moves for Oma in the kiddie pool. 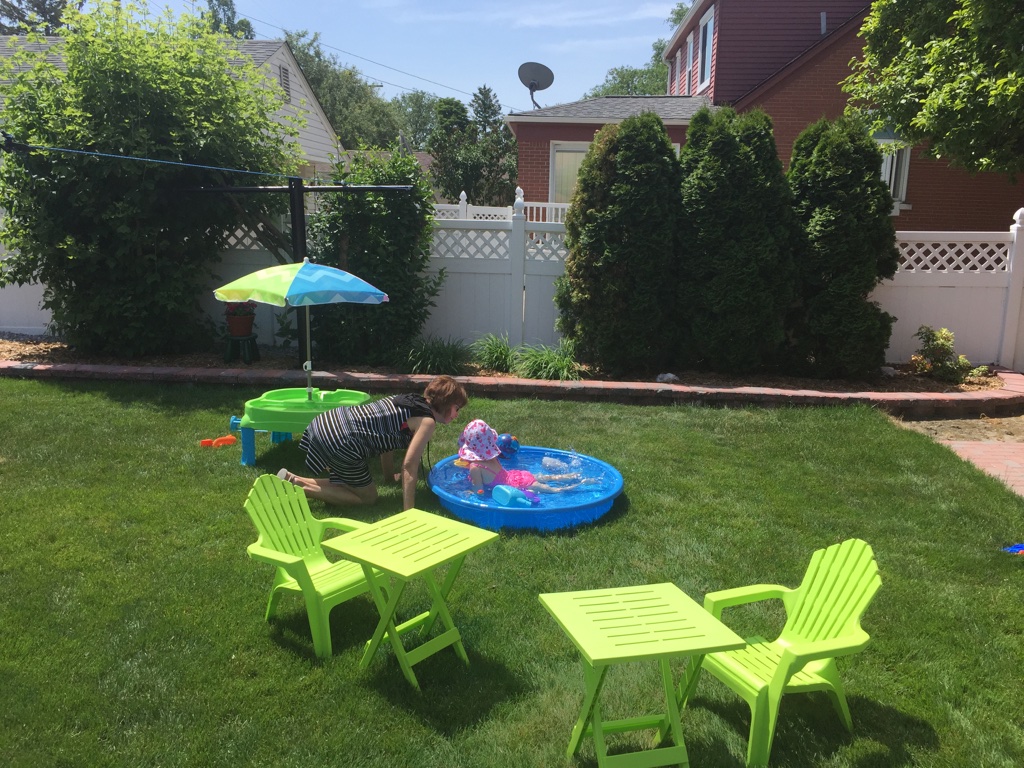 Lucy was super excited to ride on my old tricycle, although you’d never know it from this picture! 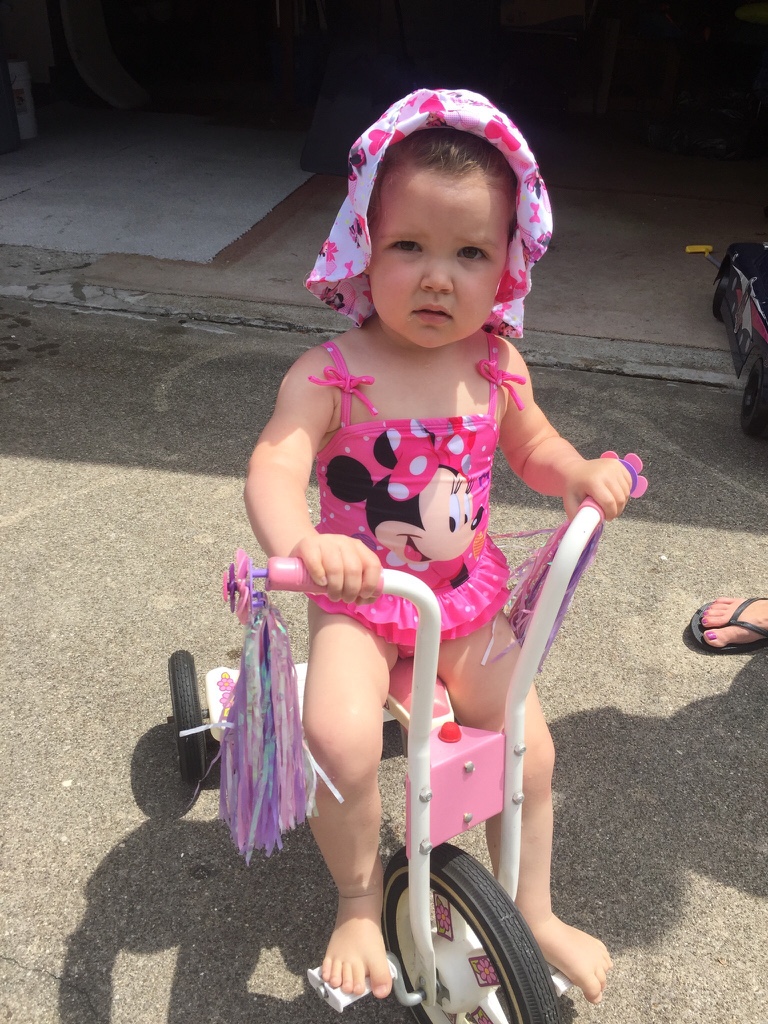 Emmy stayed in the shade and was the life of the party. 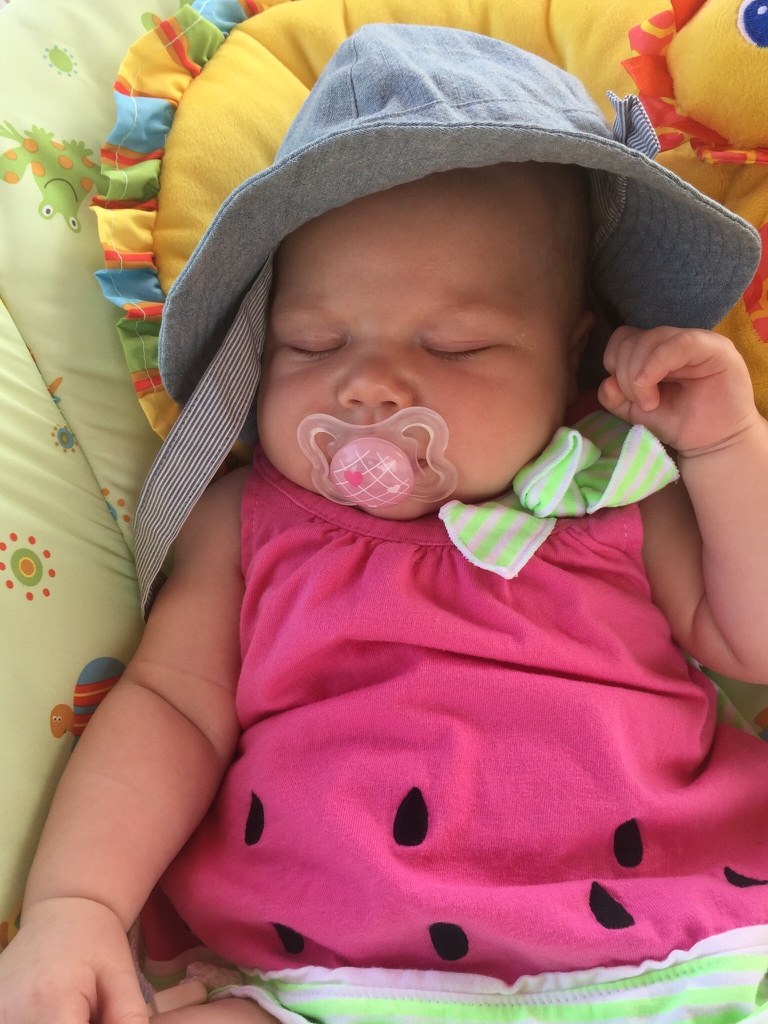 In an attempt to drop some more baby weight, I’ve been trying to limit myself to sweets only on Saturdays. This is HUGE for me. I might be convinced to sell one of my daughters for the right kind of chocolate treat. J to the K, mostly. Anyway, we were looking forward to our first trip to Bob Jo’s of the year. Lucy was very tired, though, and it was waaaay too hot out to sit outside and eat with Emmy, so we ate it in the car while Matty drove home. Vanilla with toasted coconut = amazing! 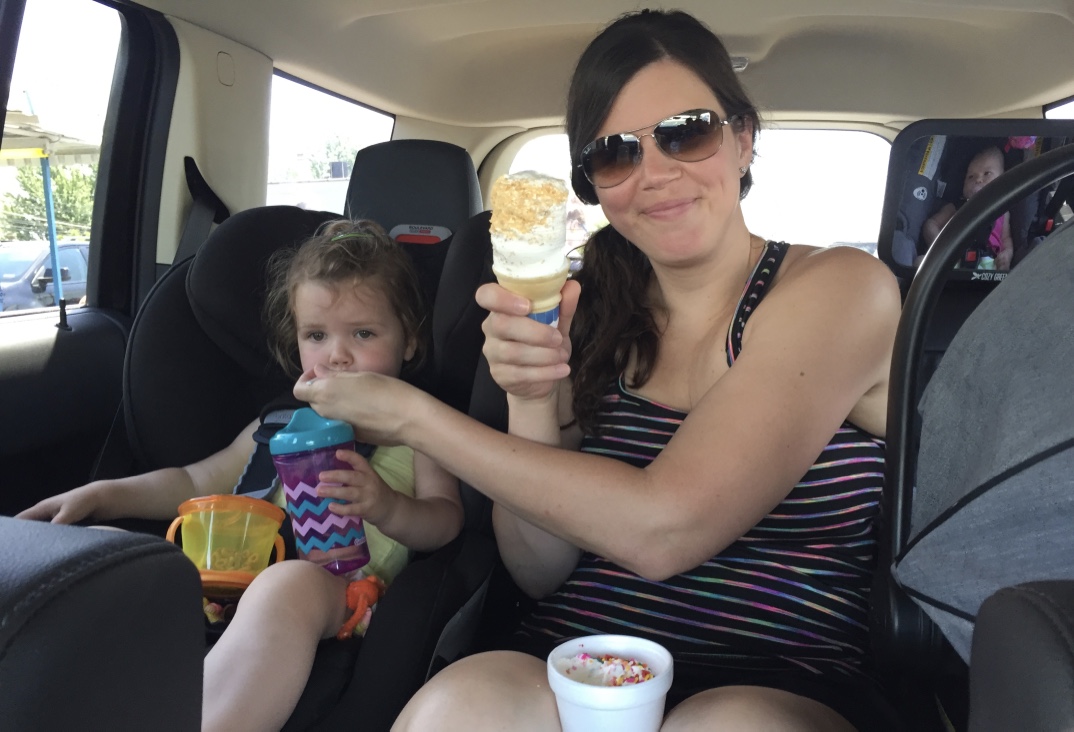 She stole my cone! 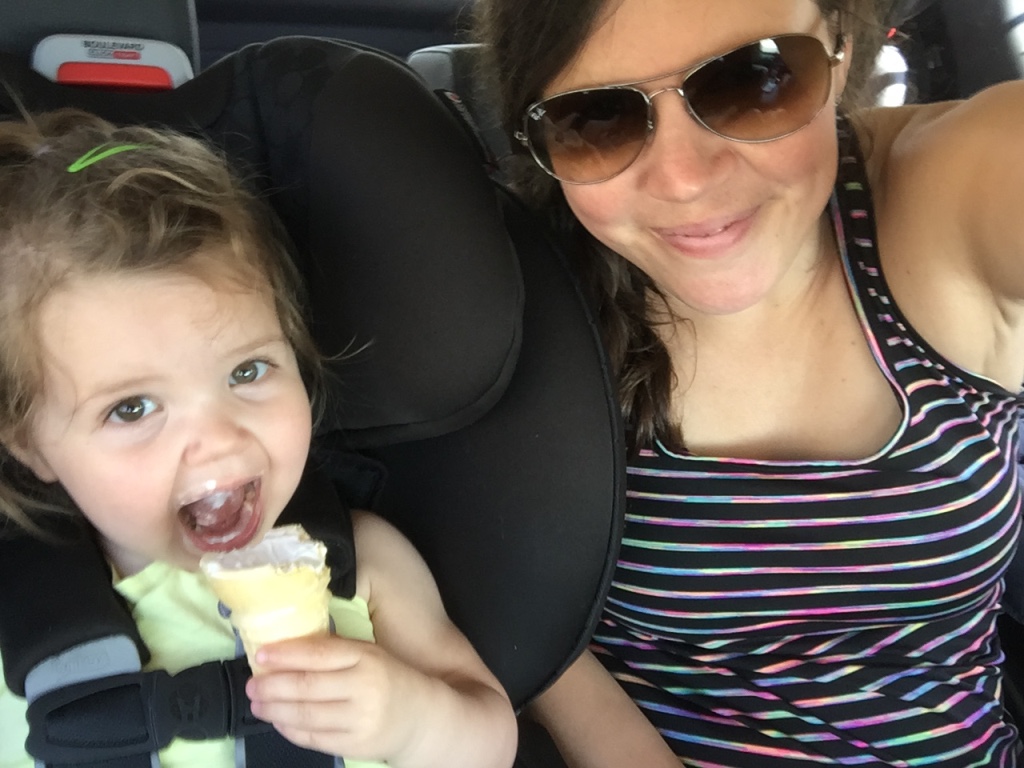 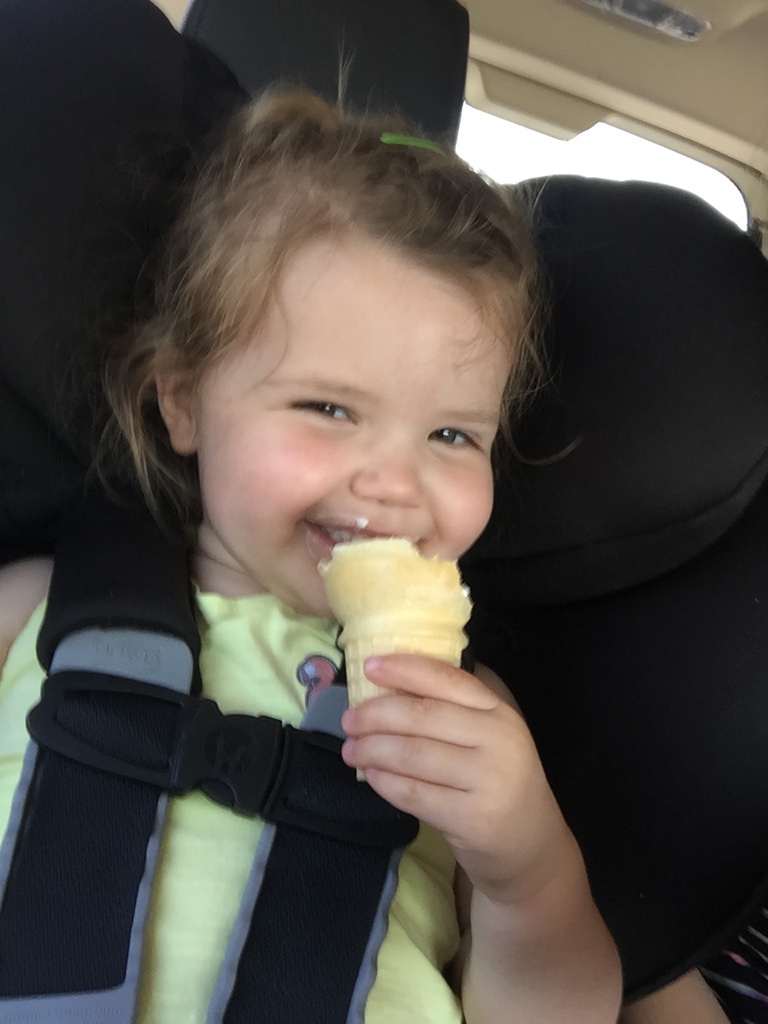 Lucy took a late and long nap after the pool, and Emmy snoozed for just a little bit. 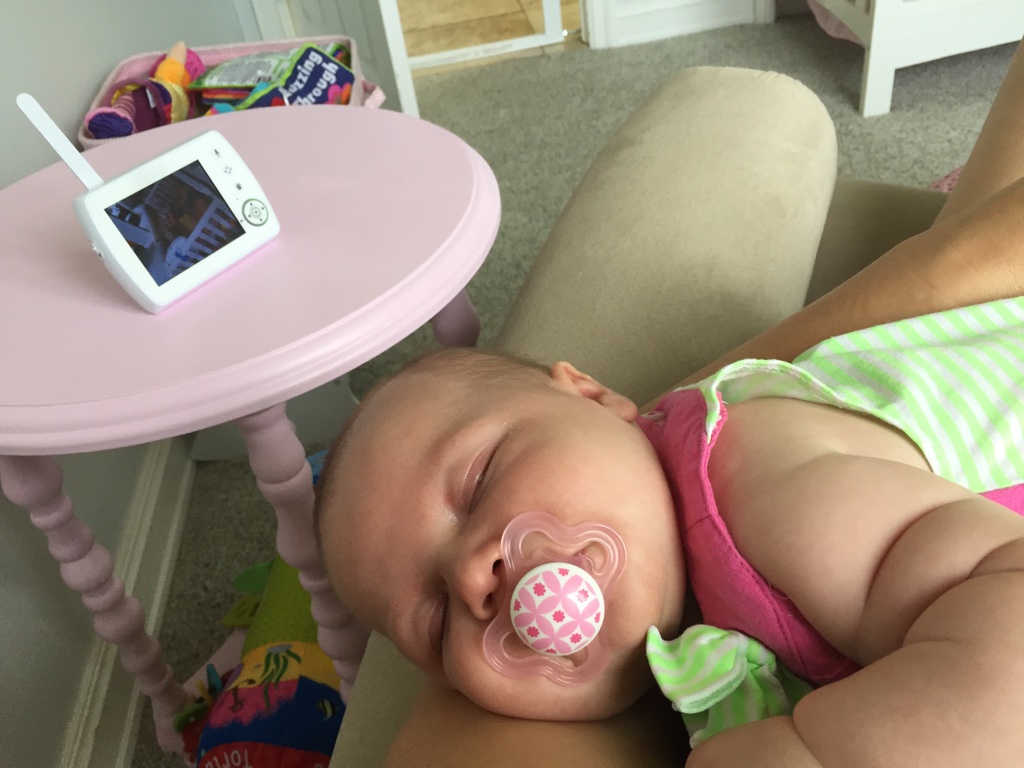 After nap, we surrounded Emmy with stuffies while Matty made dinner. Then Lucy and Matty played in the sprinkler while Emmy and I sat in the shade and enjoyed the spectacle before bed. 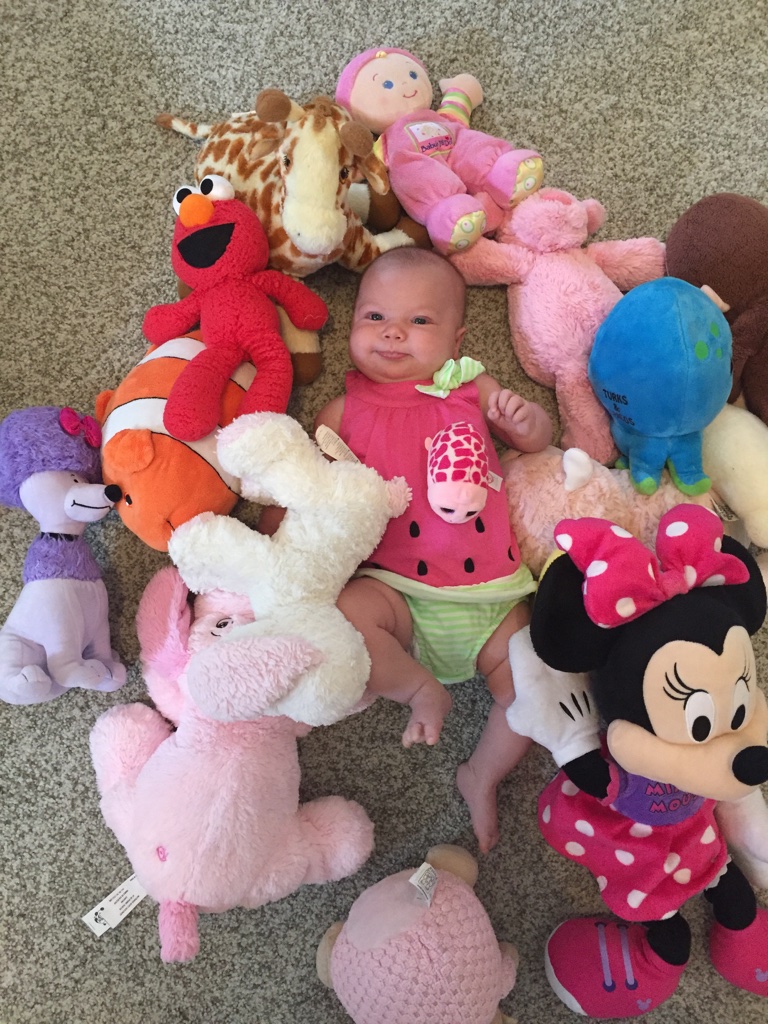 On Sunday afternoon we drove out to Milford to pick up a double jogging stroller that we found on Craigslist! I’m so excited about it, but we haven’t taken any pics yet. We happened to be out by the Heinbuch house so we stopped by for dinner and a boat ride. Lucy had a great time! 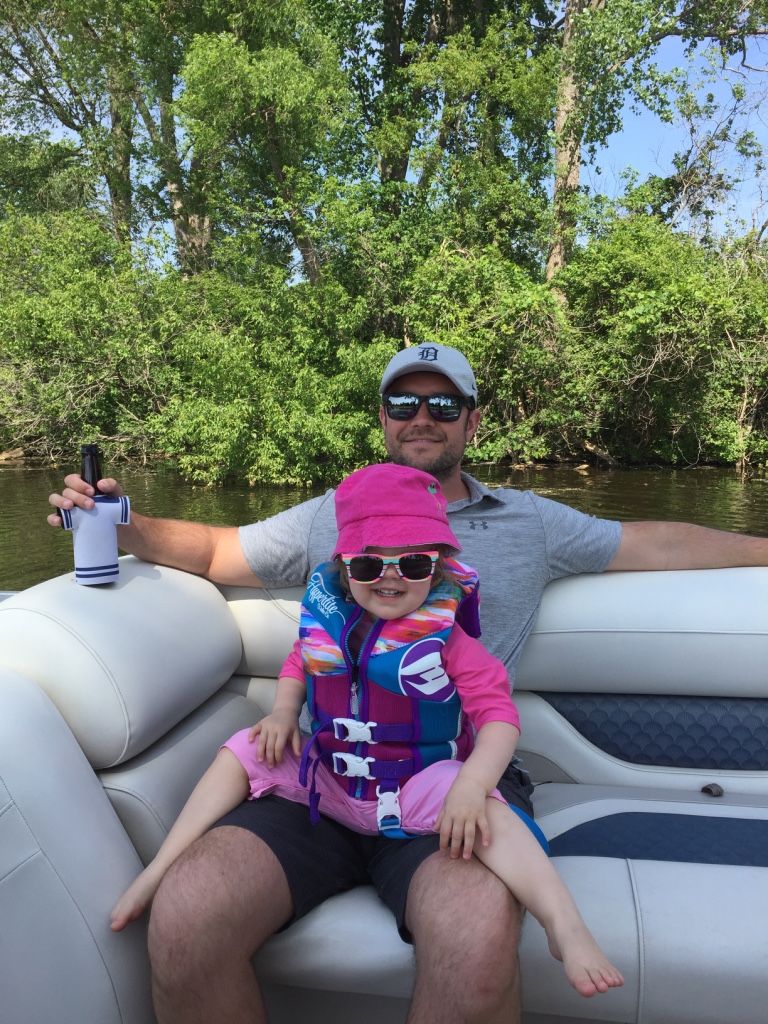 Someone kept pretending to “fall asleep” when Matty tried to take our picture. 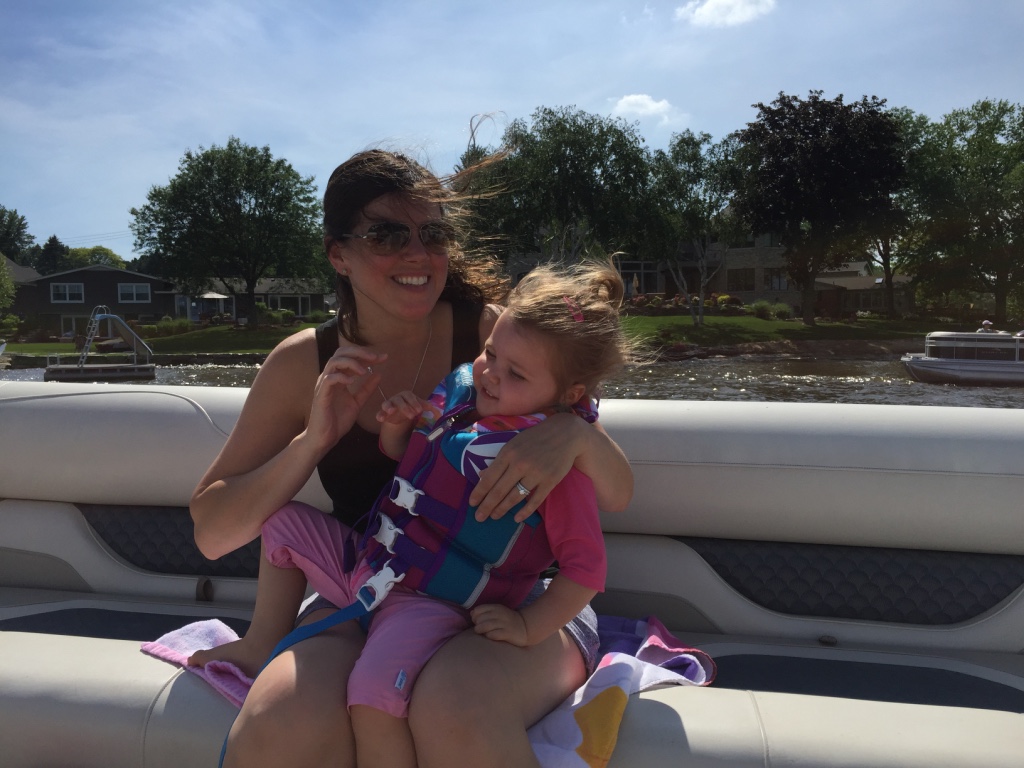 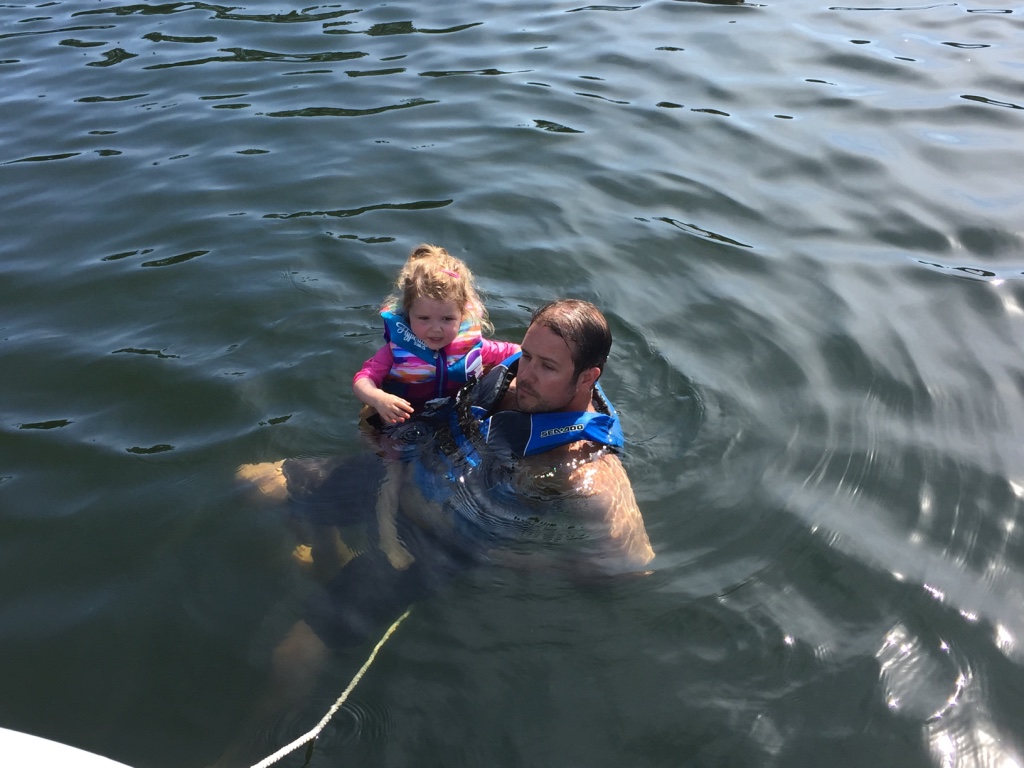 After a few minutes she was floating around all by herself. We definitely have ourselves a water baby! 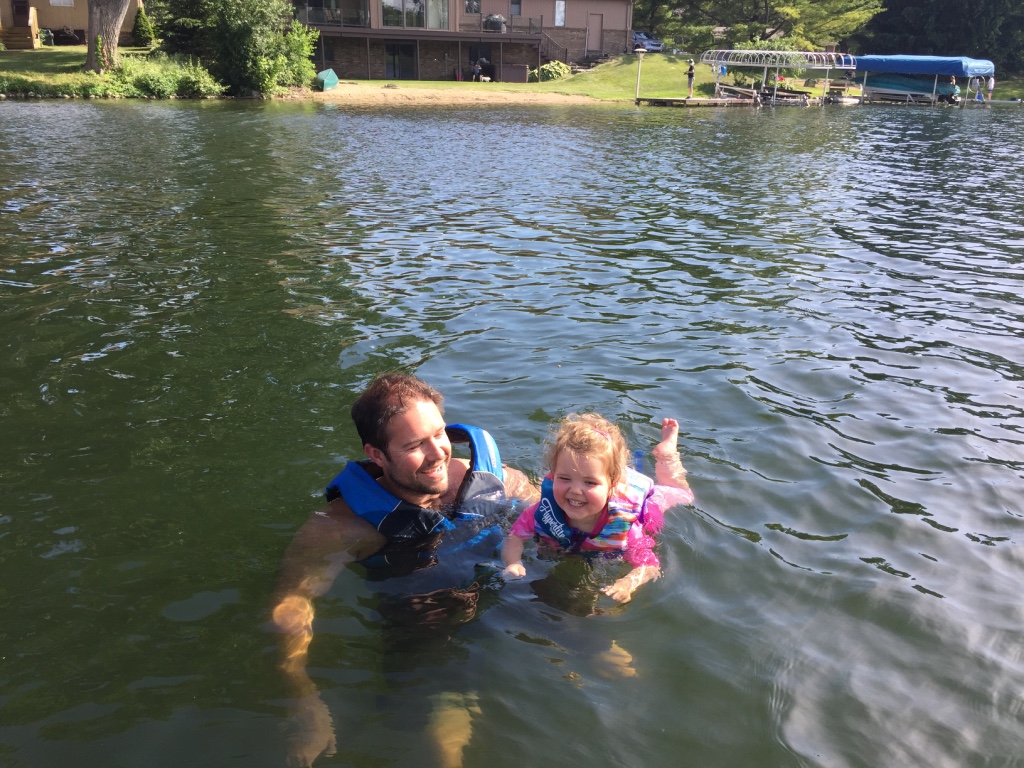 It was a great weekend with family and friends. We played hard and Lucy napped even harder! Unfortunately, I played so hard that I don’t feel prepared for the upcoming week. Matty says it’s worth it since Lucy had such a great time. I agree, but still feel a little stressed that there’s no food in the house!
Hope everyone has a great week. Stay cool!
XOXO