Our sweet little girl went back to the doctor yesterday because her screaming and fussiness just will not stop. Wednesday night she screamed from about 7pm until 11pm. If we managed to find something that calmed her down, it would only last a few minutes and then she’d start right back up again.
After talking to her doctor on the phone for a bit today, I took Emily in one more time for a check up and a diaper check (this is where they test a poopy diaper for microscopic blood). The doctor determined two things:
1. Emily most likely is a colicky baby.
2. Her diaper tested positive for blood, which means she probably has some other food sensitivity in addition to the dairy and soy. (I’ve been dairy and soy free for over a week now, so something else is causing the blood in her diaper.)
#ugh
So, for now, our plan is to use a super special (ie, super expensive) formula for the next 2-3 weeks. I’ll continue to pump my milk, but will freeze it. There’s just too many variables for me to eliminate from my diet in addition to the dairy and soy. The sensitivity could be to eggs or gluten as well. So we are going to use the formula for a few weeks to see if we can get her to improve. This way we know for sure that she’s not getting any dairy/soy/etc through something I might accidentally eat.
As far as the colic goes, the doctor sympathized but said there isn’t really a cure. Apparently, symptoms of colic start to subside at 12 weeks so we are still on the upward climb. yay. The doctor said it looks as though Emily is going to be a bit of a high-maintenance baby, which is the exact opposite of Lucy as a baby. When researching colic, I found the following explanation on a website:

For both new and veteran parents, a colicky baby can lead to sleepless nights, psychological stress, physical exhaustion, and even the breakdown of a relationship.

Yes to all of that . . . except maybe the breakdown of a relationship part. Matty and I aren’t breaking down. We may get short with one another now and then, and I haven’t really been sleeping in our bed at night, but we still make a pretty good team.
Despite all of the crying and eating issues, Emily continues to remain super cute. I caught a nice little picture of her for her one month birthday. 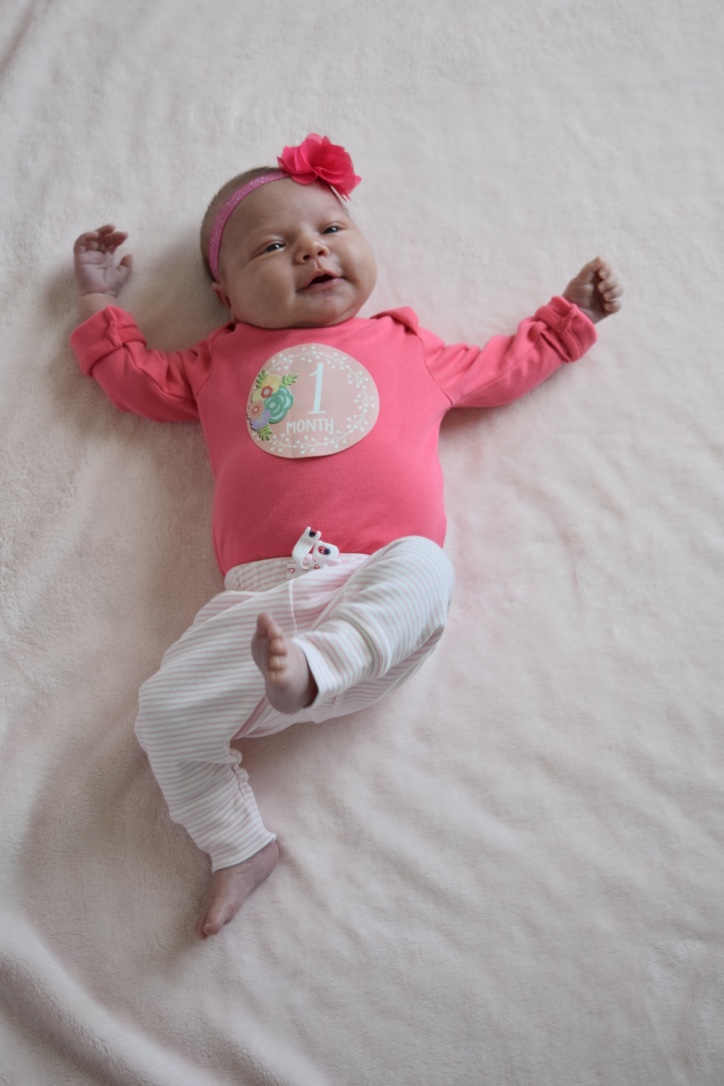 As of yesterday, she weighed in at 11lbs 7oz, which means she gained over 3 pounds since birth. What a little chubbers!
She’s really trying to smile at us (when she’s not crying), and loves to snuggle up on us for naps.
Lucy calls her “Emmy Roses,” which we think is the cutest thing ever.
She’s adorable and we love her so much . . . and just want her to feel better and stop crying!
Hopefully by her second month picture, we’ll have everything figured out, life will be calmer, and I won’t look like such a zombie anymore!
XOXO