Life lately has been a little crazy. Lucy has decided to throw her naps to the wind again, which does not make the days easy for this super pregnant mama!
Monday came and we had zero plans, so I decided to stay home all day and get some things done. Lucy woke up and was ready to take her baby for a walk right away. 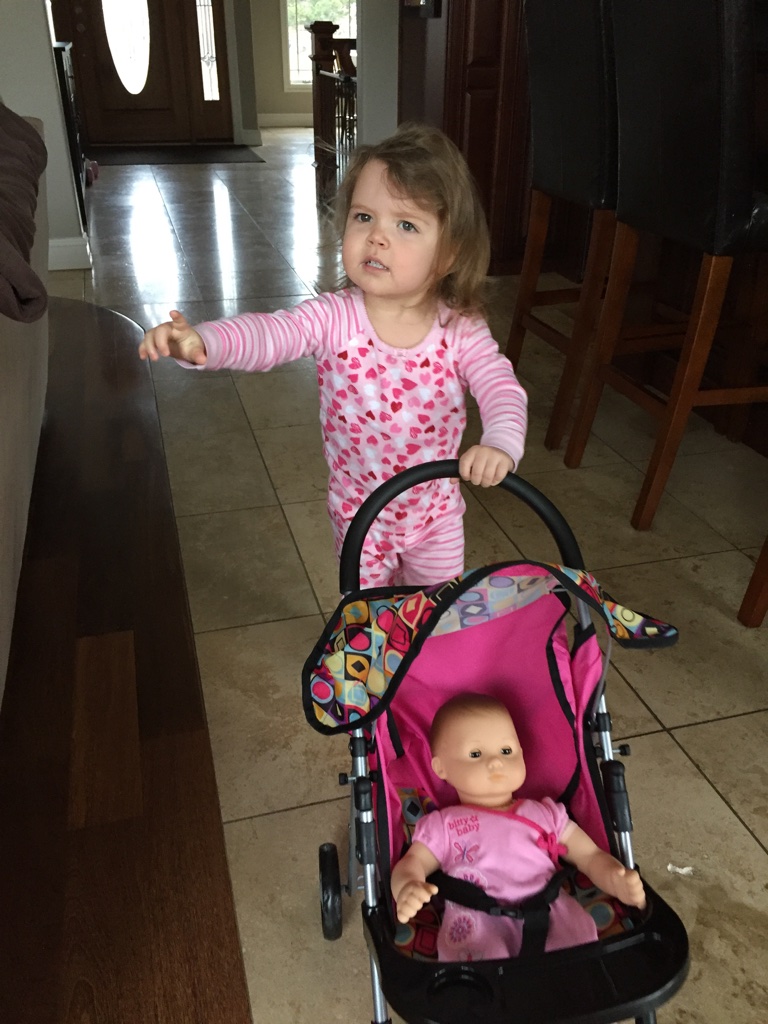 I figured it was time to bring up my pumping supplies and bottles for Emily. It was like Christmas morning for Lucy. She was “super helpful” with unpacking the bottles and lids . . . 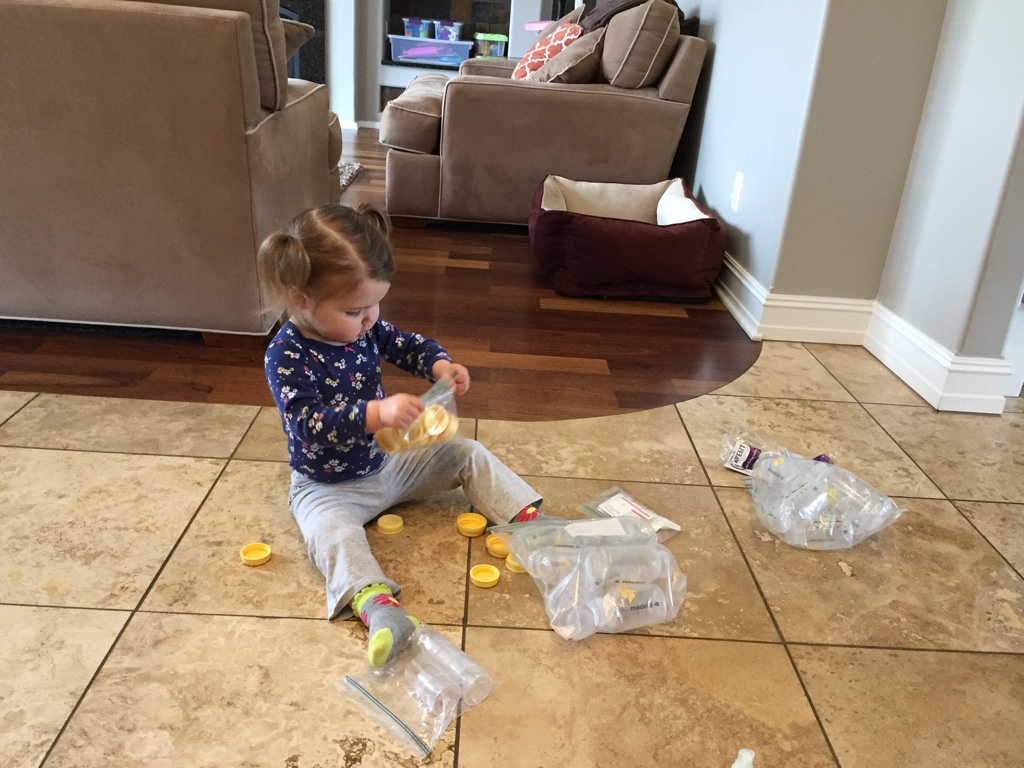 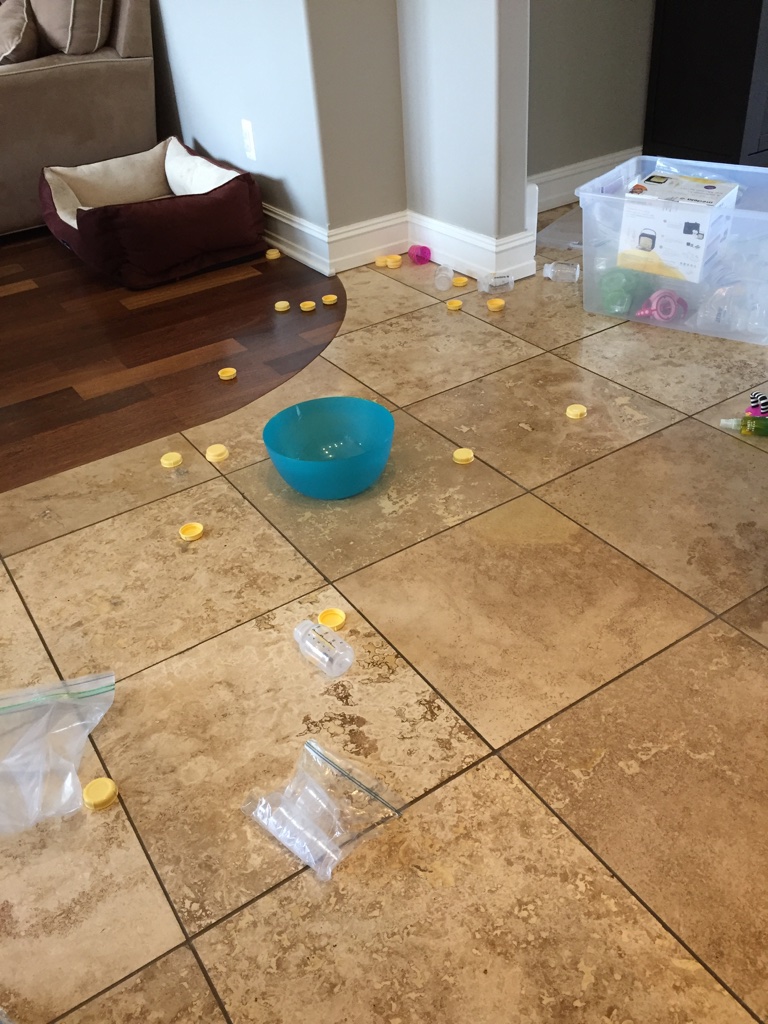 Halfway through the bottle project, Lu sprang up and went to grab my container of oats and said she was ready to bake. So I set her up with some baking supplies, which lasted about five glorious minutes until she started brushing everything on to the floor! 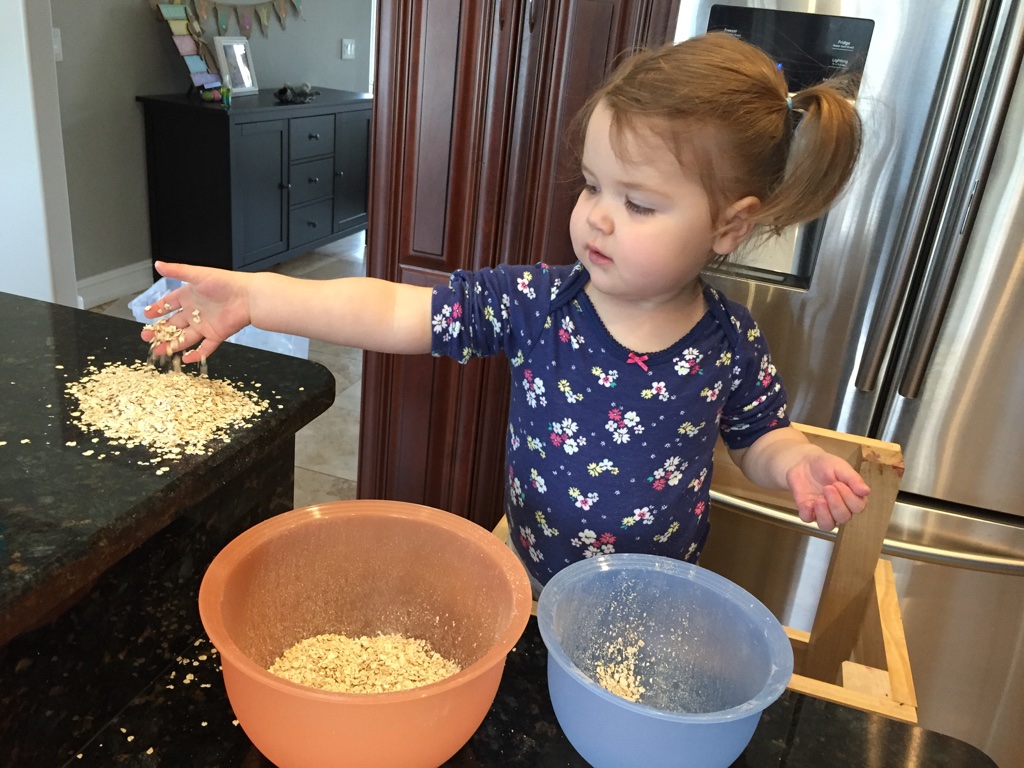 Later in the day she started saying that she wanted to give her baby a bath, so Matty brought up our baby tub from the basement. Baby Fishy got a super quick bath . . . 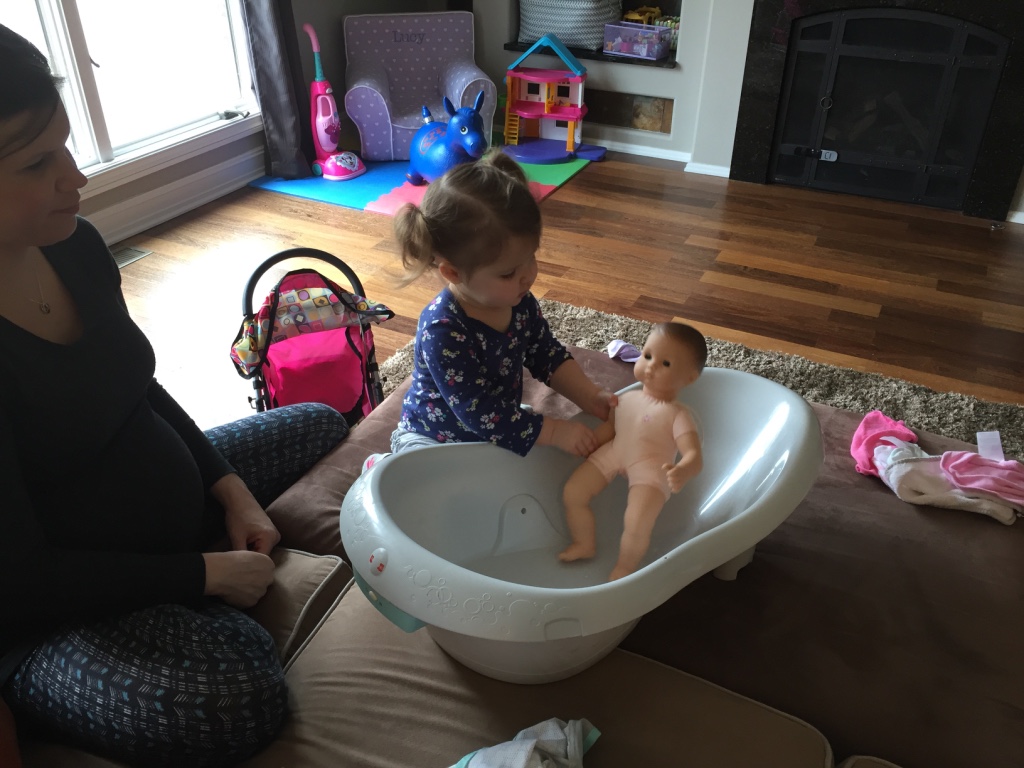 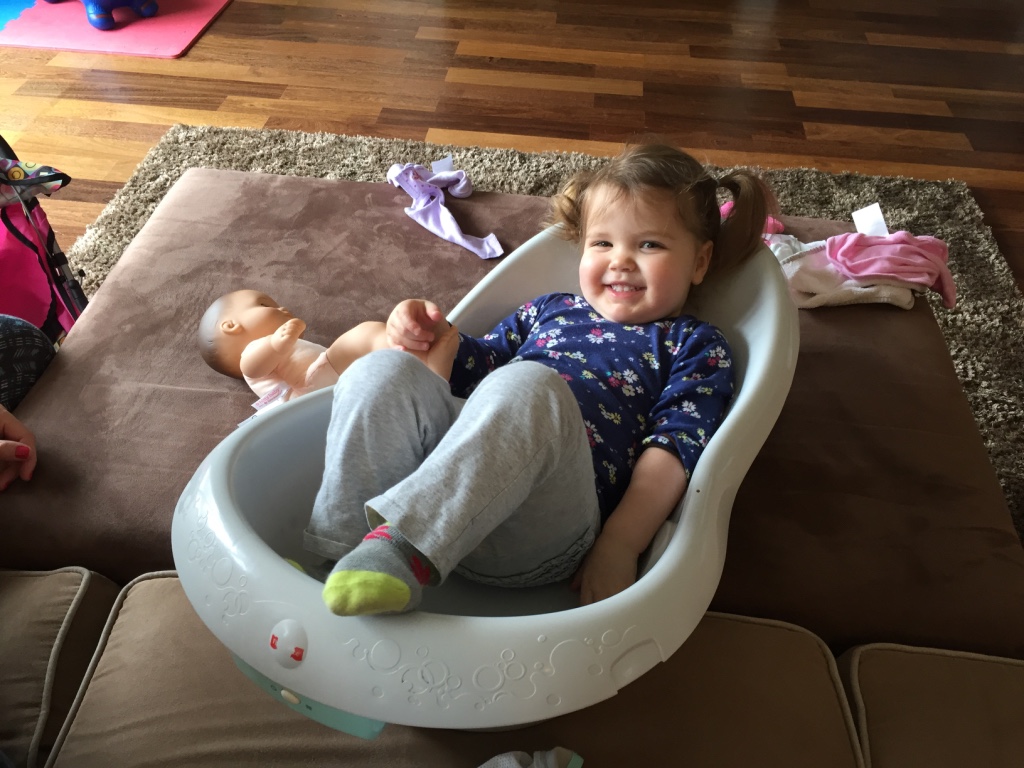 And for reference, here’s a cute pic of her in the bath when she was about 7 months old! 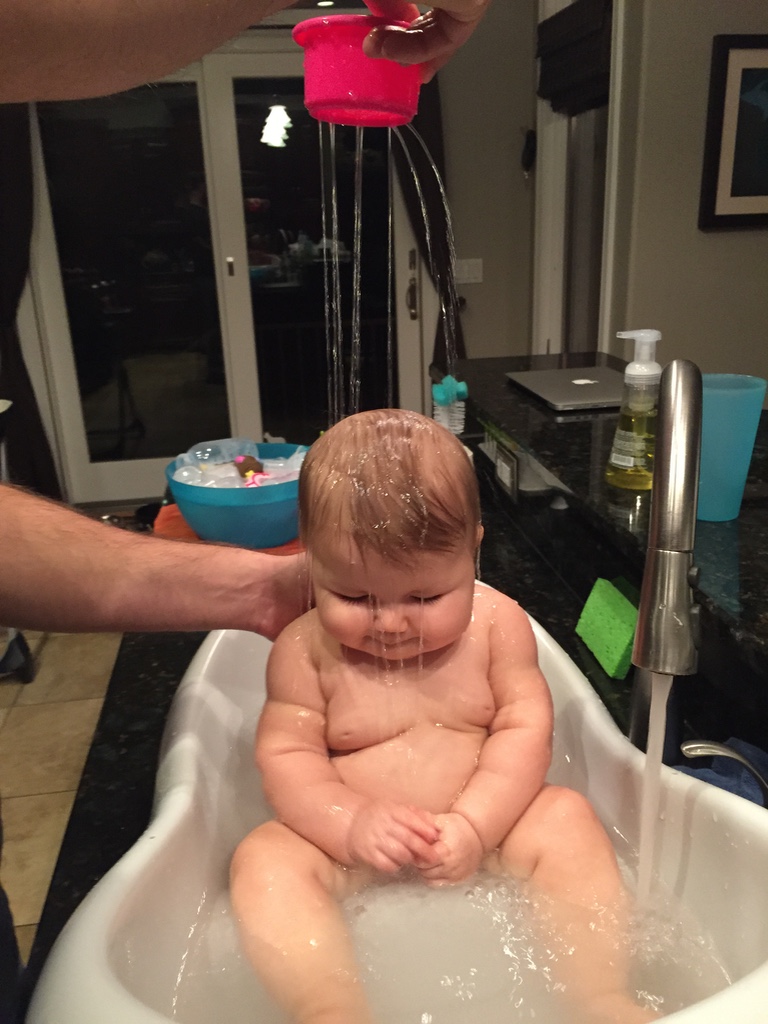 We went for a walk in the park Monday after dinner, and Lucy had a great time splashing in all the puddles. 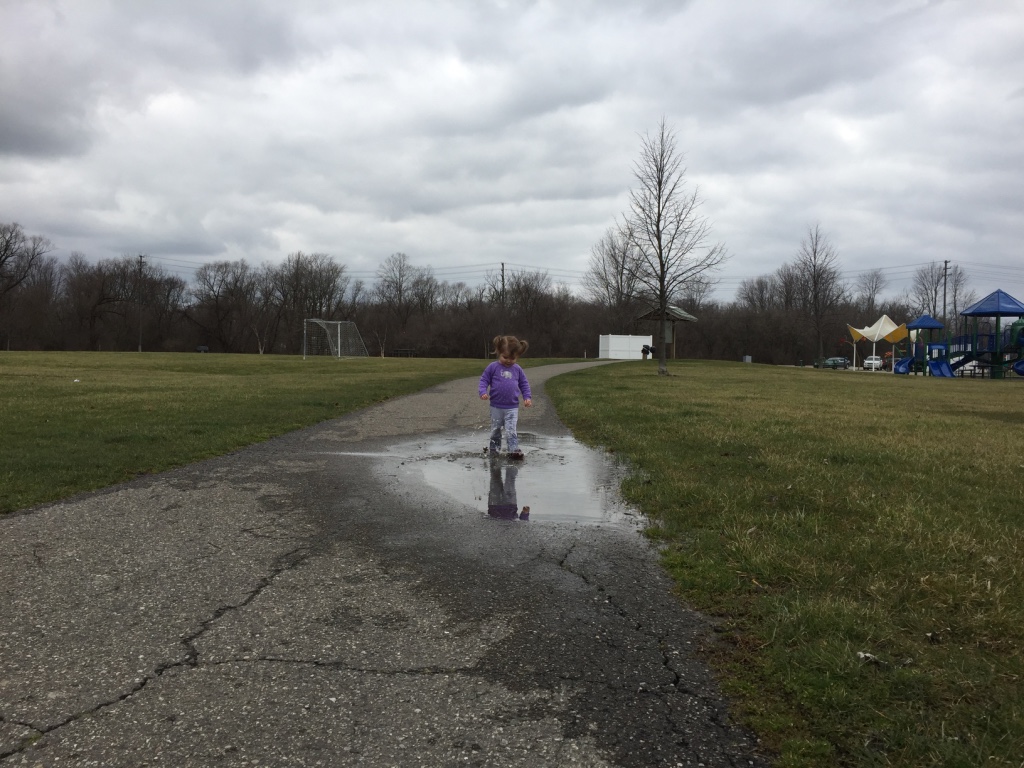 She loves to look for ducks in the creek. 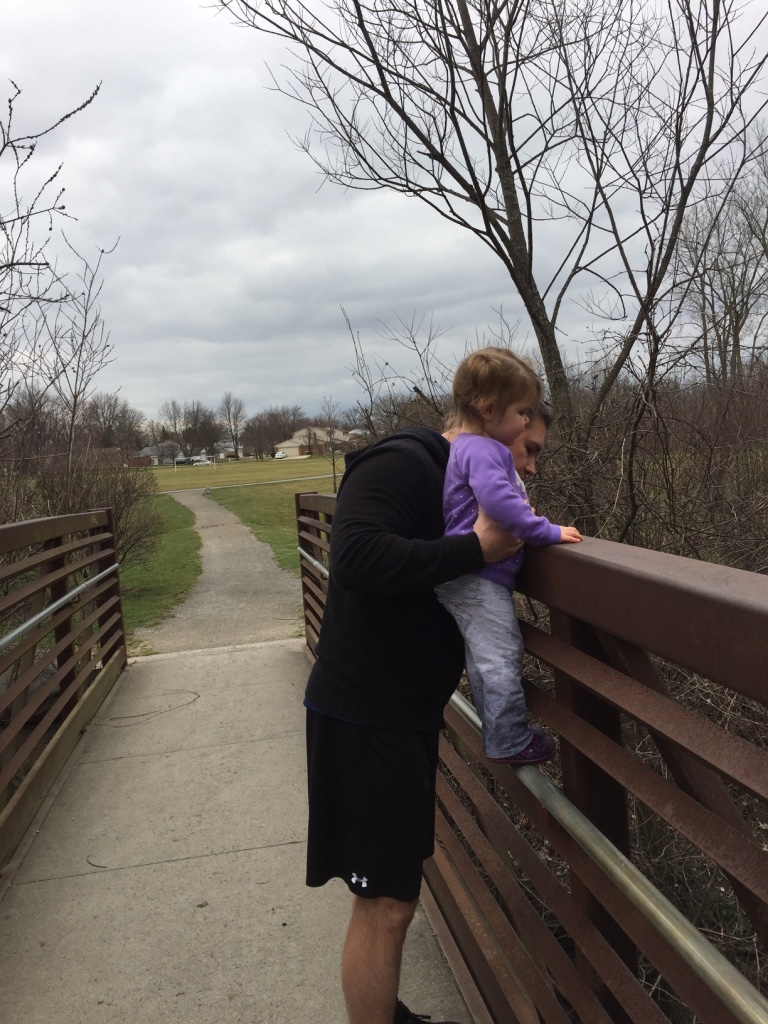 Due to her lack of naps, Lu has been sleeping in later in the morning. Tuesday I had to go in and wake her up so we wouldn’t be late for our Kindermusik class. Doesn’t she look so comfy?! 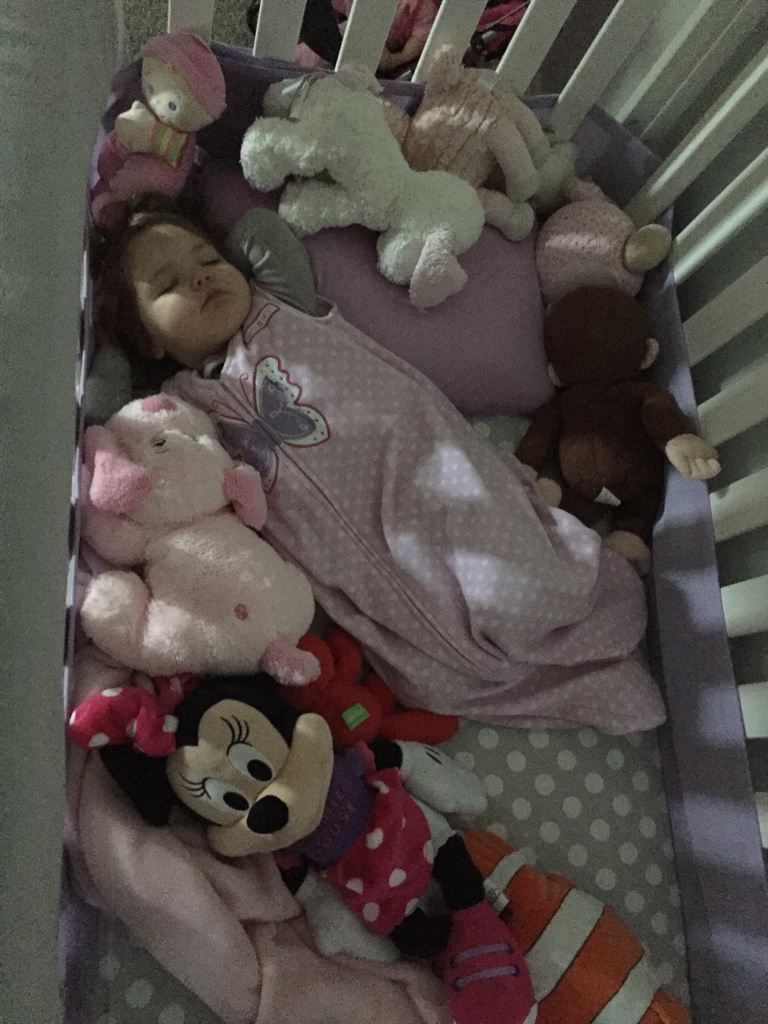 When she finally did decide to get up and start her day, I thought her hair looked so cute! 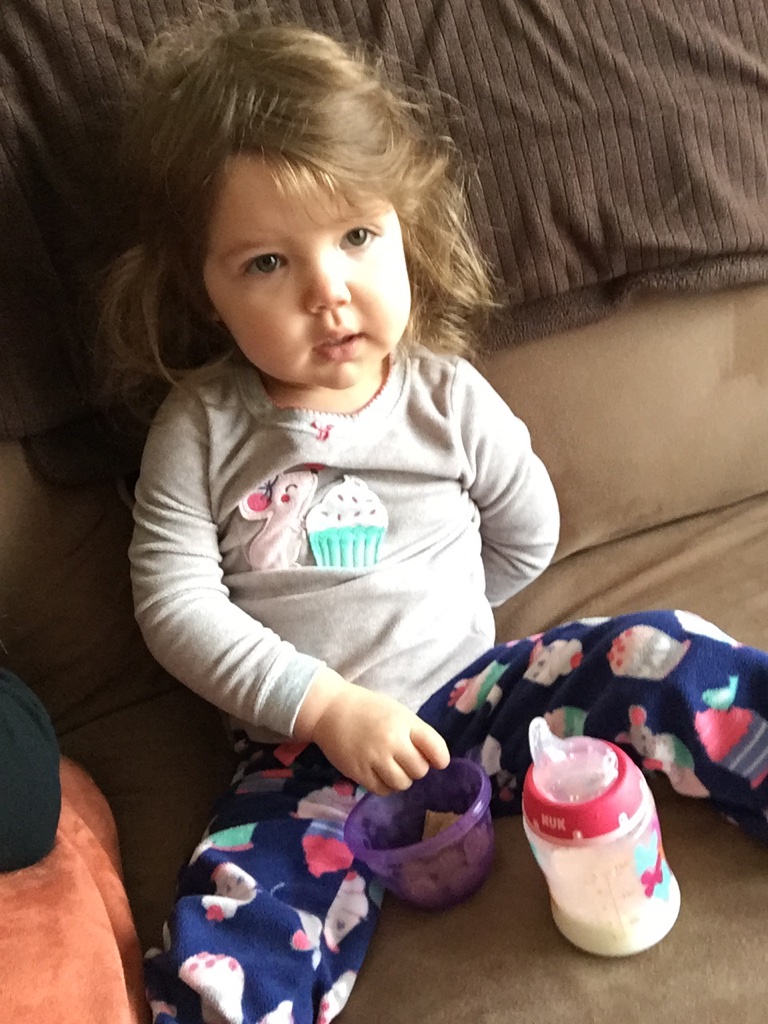 She chose not to nap again on Tuesday, so I put her to work washing bottles with Oma. 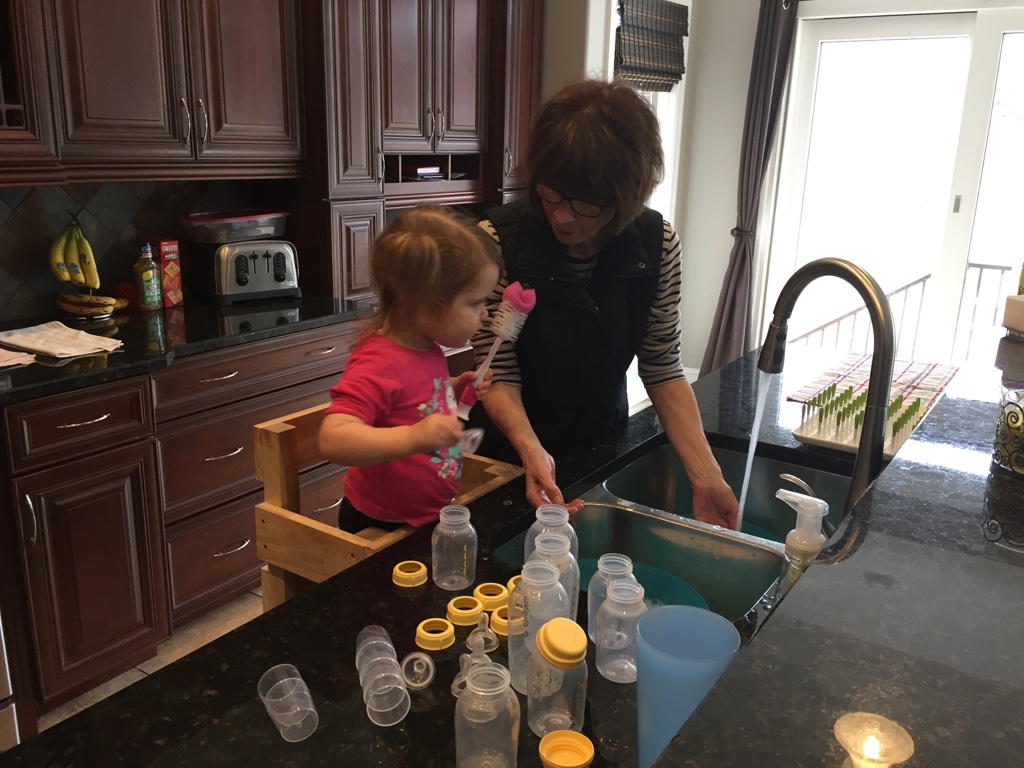 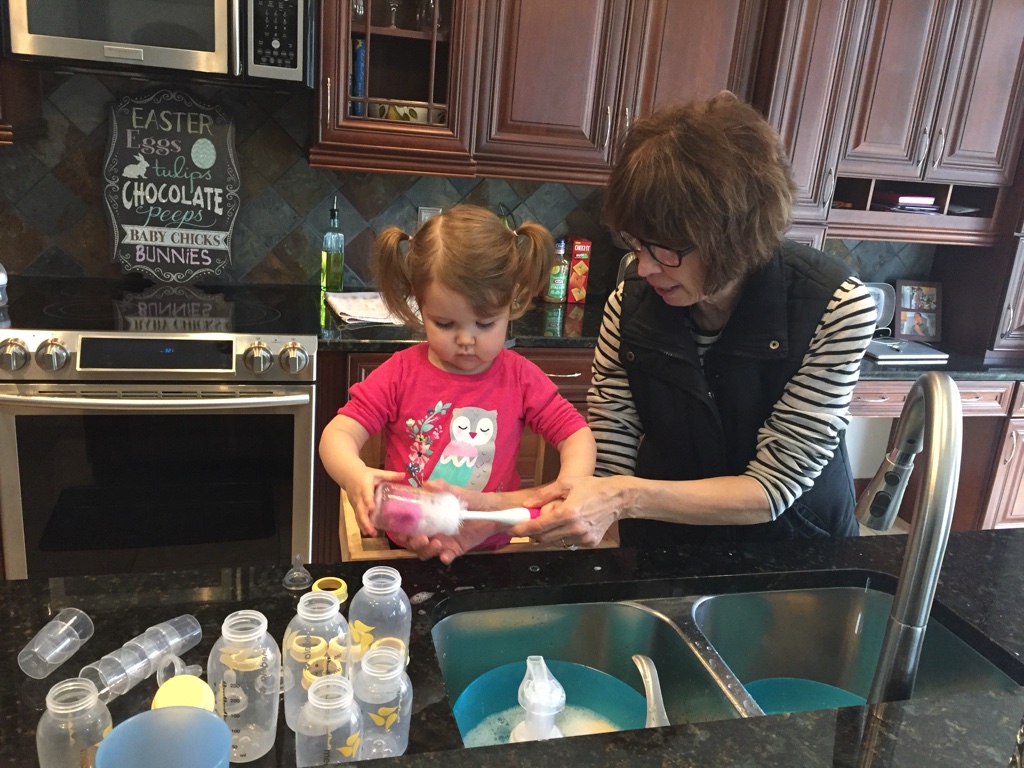 This rocking chair used to be mine when I was little. It also used to be pink and covered in Cabbage Patch stickers. My parents gave it a make over, and it’s just perfect for Lucy to rock her baby in! My sweet friend Becky had us over for lunch yesterday, and Lucy was obsessed with Baby Maxine! Hopefully, that turns out to be a good thing when we bring Emily home. 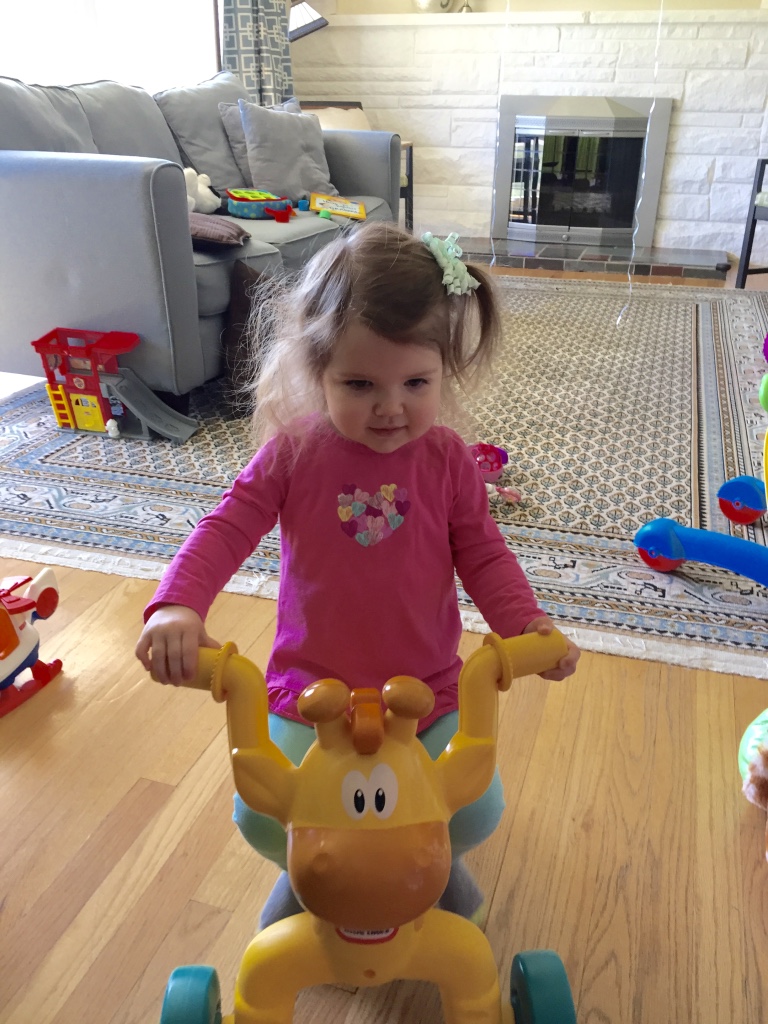 Lucy even wanted to sit in Maxine’s high chair to eat her lunch. 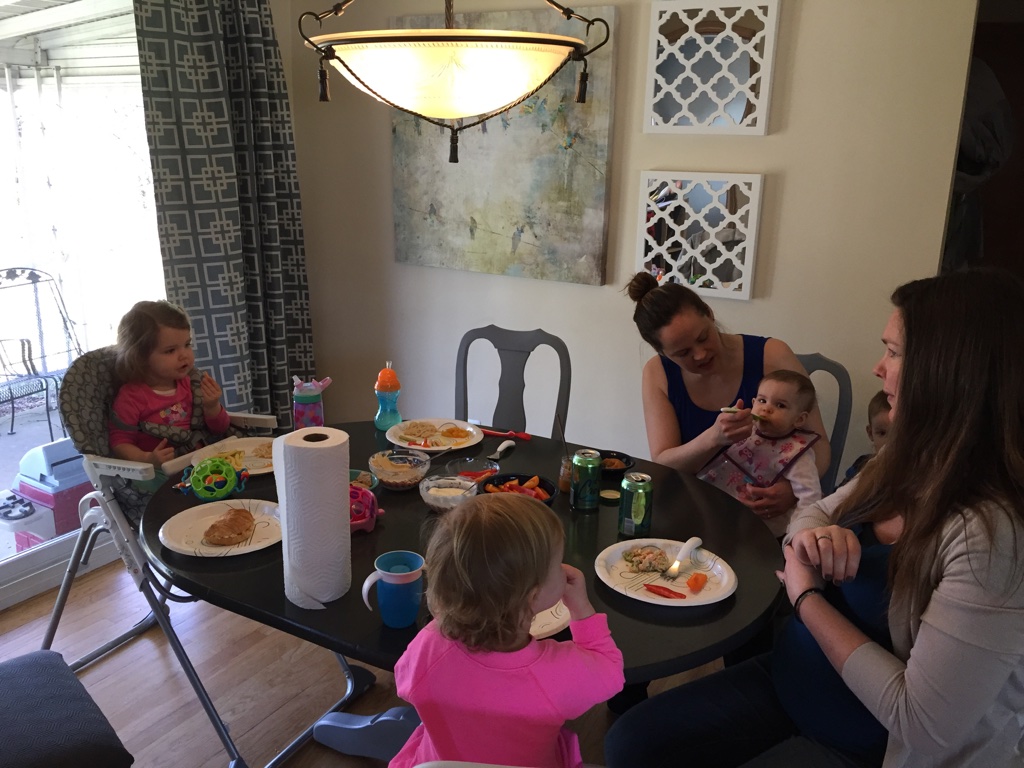 Matty got a little “push present” yesterday. Even though he won’t be doing any pushing (and, technically, neither will I!), he’s put up with a fairly cranky pregnant mama for the past nine months and this grill was his reward. 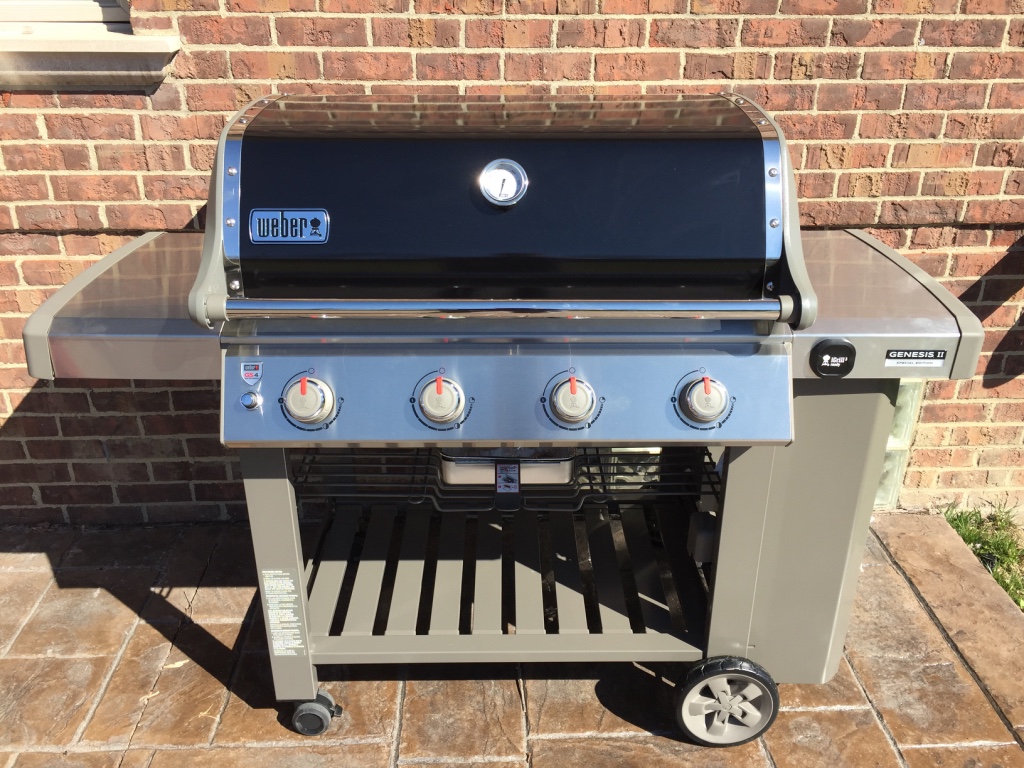 Looking good grilling us up some chicken and asparagus for dinner last night. 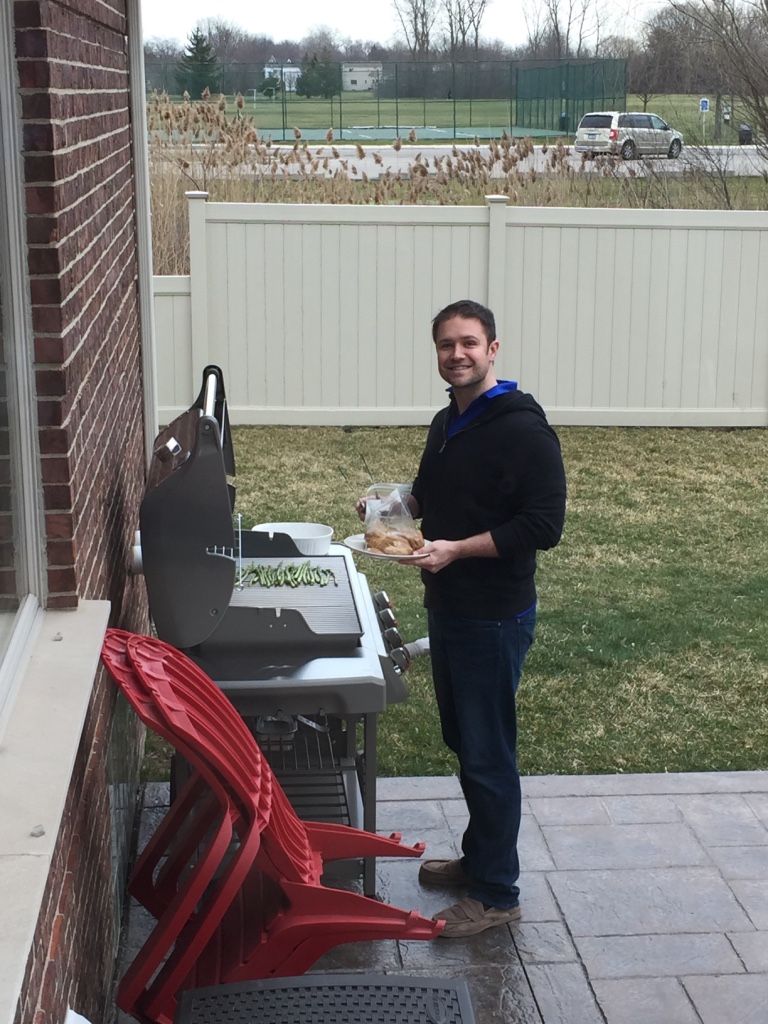 This is not the clearest picture, but we took a selfie on our last night as a family of three while we were playing outside after dinner. You guys, we are having a BABY tomorrow!! Last night my mother-in-law said it seems like just days ago that we were hoping to get pregnant again, which is funny because a few nights ago Matty and I both agreed it seems like I’ve been pregnant FOREVER!
This morning I’m taking Lucy to open gymnastics and then HOPEFULLY she’ll finally take a nap. My parents are going to come out and pick her up after nap and take her back to their house. We have to be at the hospital at 6:15 on Friday morning, so we figured it’d be best not to have to disturb Lucy that early. I’m going to miss my girl so much while I’m in the hospital. It’s so weird to think that she’s not going to be my only baby anymore!
I’ll try to hop on here quickly at some point over the weekend to post a picture or two. Other than than, I may take a blogging break for a few weeks to get acclimated to our new normal. Also, I need to figure out what the heck to call my little slice of the internet since it’s not life with just Lucy anymore!
If you haven’t signed up for email notifications whenever I do a new post, be sure to check back every now and then over the next few weeks to see when I’m back up and running.
Have a great weekend . . . I know we will!!!
XOXO