I’m happy to report that life seems to be getting back to normal around here. Illnesses have vanished, and we are getting back into the swing of our daily routine. I still don’t feel like I have a ton of energy, but I’m also fairly certain that’s my new “normal” for the next two months.
Matty usually leaves for work before Lucy wakes up. Every morning, without fail, when I go in to get her from her crib, Lucy will ask the following questions:
Dadu home? Dadu coat? Dadu hat? Dadu mitts? Dadu boots? He usually just wears a coat, but on Monday morning he had on his gloves, so we took a picture to show Lu when she woke up. 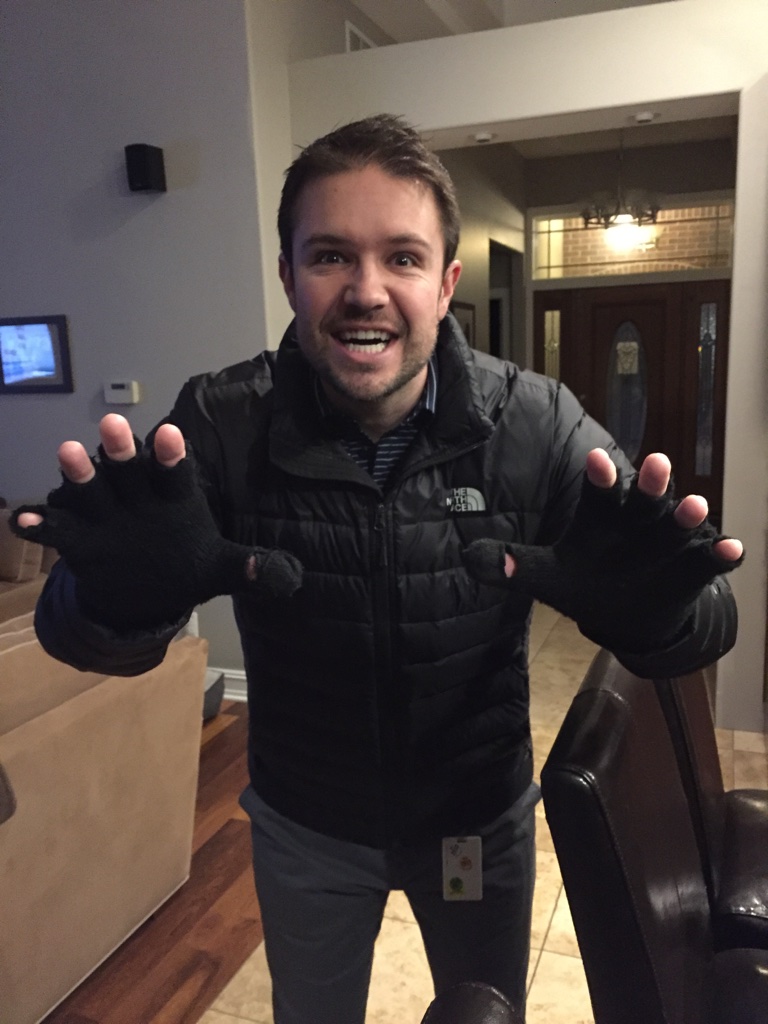 We finally went back to story time at the library on Monday after missing out for three weeks. I think Lucy forgot what it was all about and was a little nervous. She kept her sunnies on the whole time and just wanted to sit and eat her snack instead of bounce or clap along. 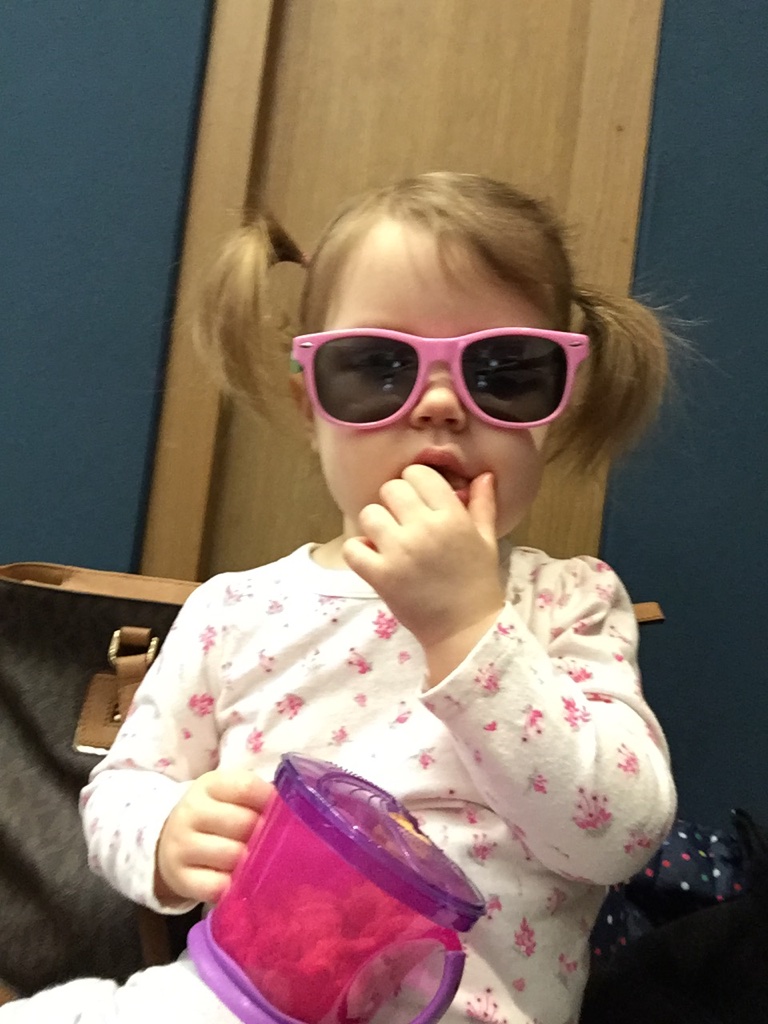 I ran into one of the moms from a moms group I used to belong to, and her adorable daughter grabbed Lucy’s hand and tried to get her to go shake the parachute with her. Lucy took about five steps and then ran back to me. #progress 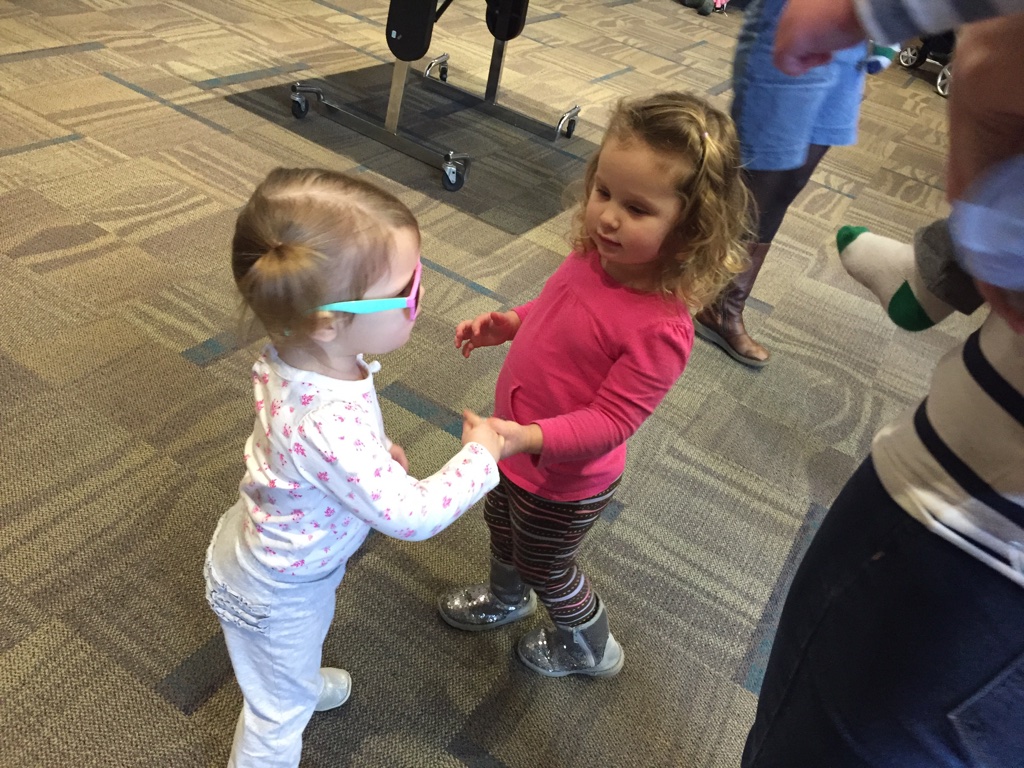 As we were on our way out of the library, Lucy made a break for the children’s area, and we spent half an hour playing with the puppets. 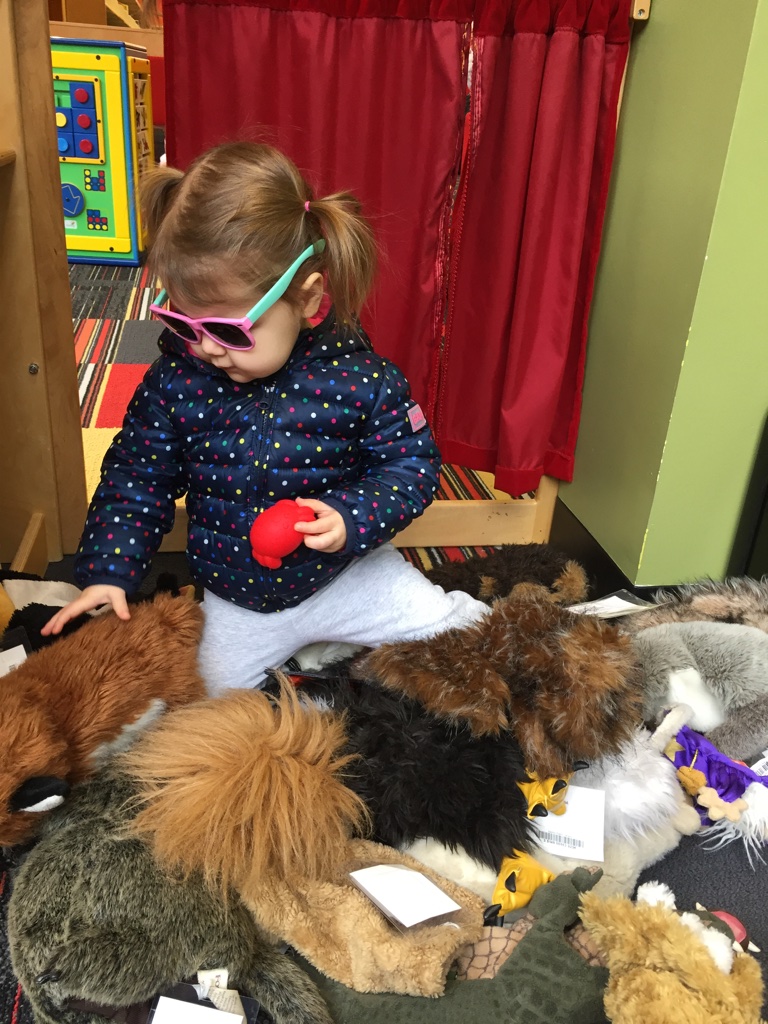 We got out the paint and had some fun after nap one day. I gave Lu red and blue, and she made purple all on her own. #babygenius 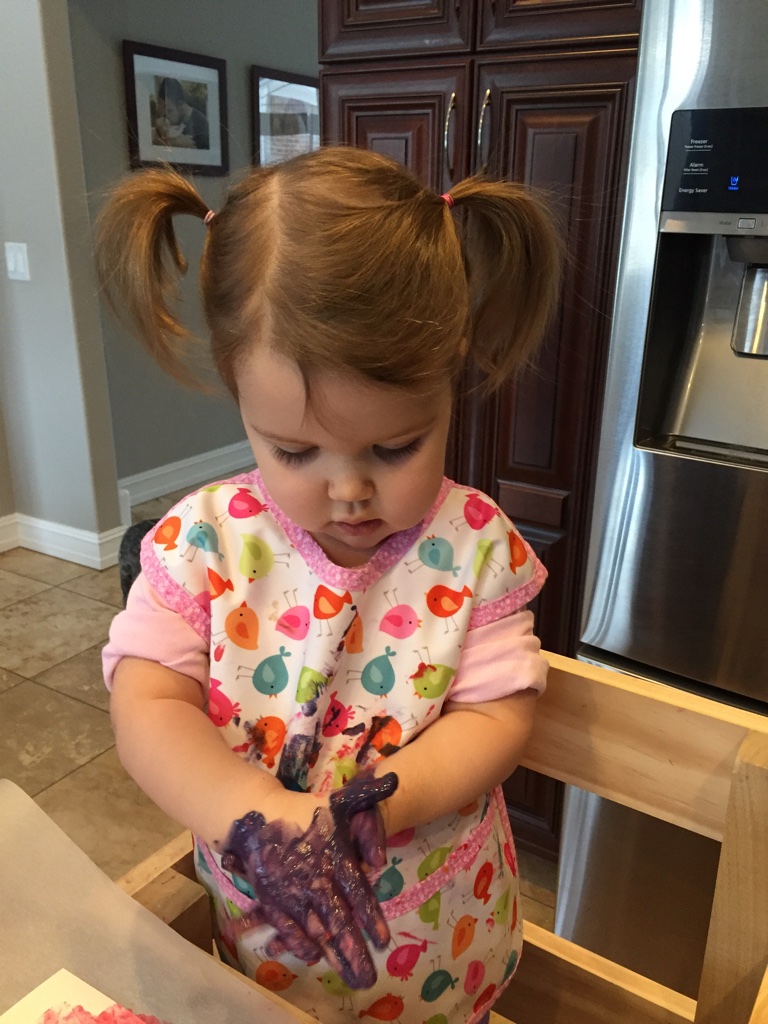 My ability to sleep the past two weeks has been TERRIBLE. Pregnancy insomnia is no joke. I managed to fall asleep for a few hours Sunday night/Monday morning and had a dream about Stroh’s Triple Chocolate Overload ice cream. I worked at a Stroh’s ice cream parlor for eight years in high school and college, and TCO was a fantastic flavor: chocolate ice cream, chocolate chips, chocolate syrup. It was all I could think about on Monday, so after dinner we headed to Holiday Market to get some. 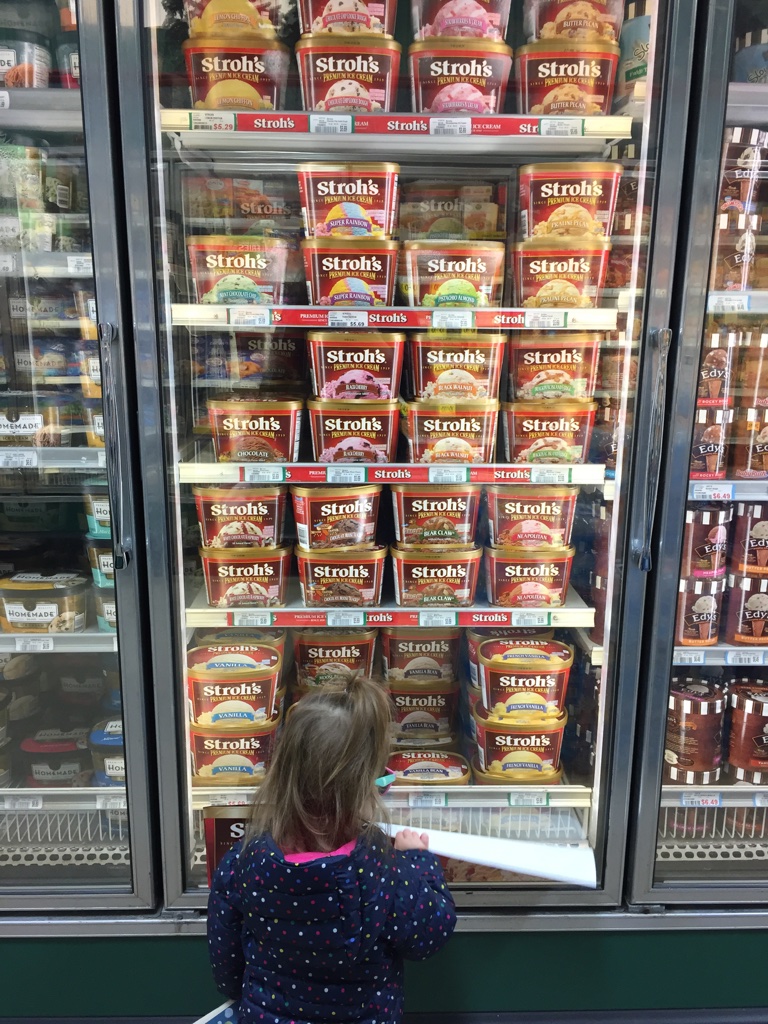 Unfortunately, they didn’t have that flavor so Lucy and I decided on Chocolate Moose Tracks. I enjoyed some while watching The Bachelor, and it was delicious! 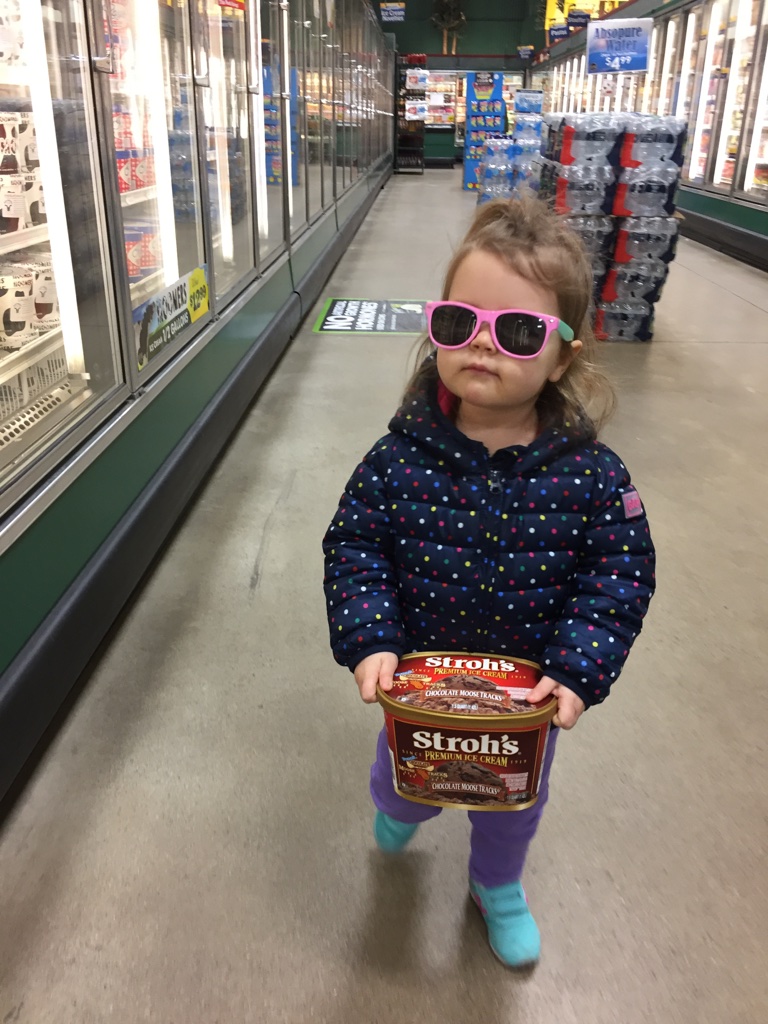 A snack time selfie after Sing and Play. Someone was obviously annoyed that I was interrupting her snack. 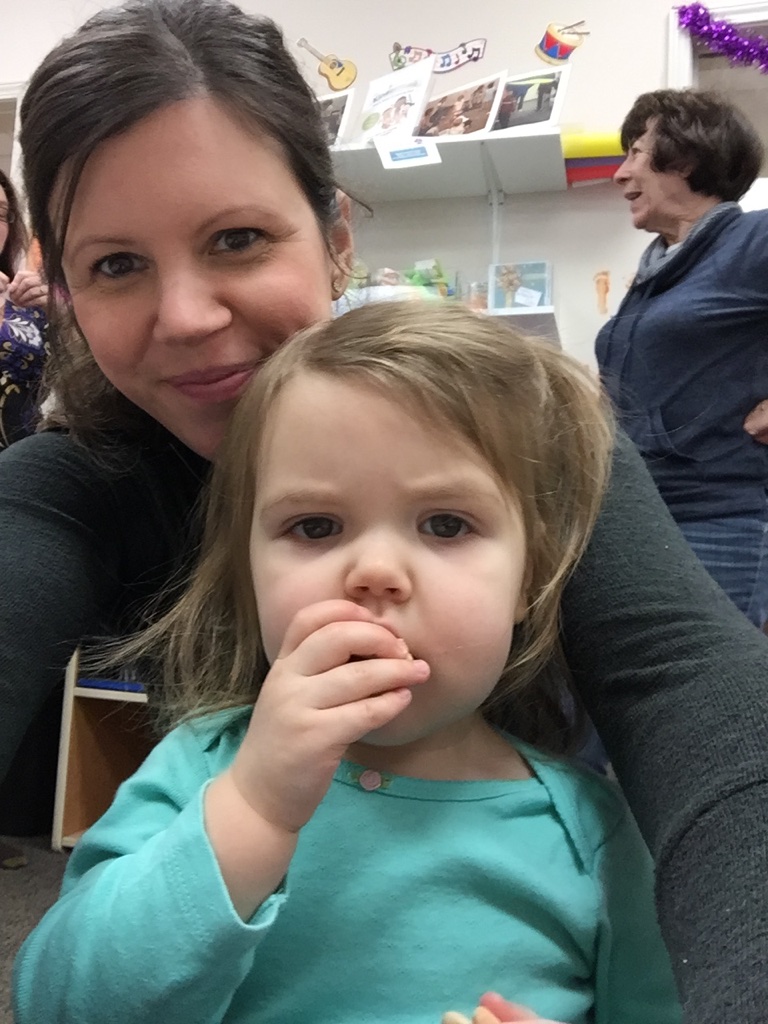 We stopped at Home Goods after Sing and Play. Lucy saw this rug and ran up to it saying, “Rug! Gamma’s house!” Rita recently moved into a new home, and we have been talking about decorating a lot, and Lucy must have picked up on it. So funny! However, I think Lucy’s tastes differ from her Gamma’s a little bit 😉 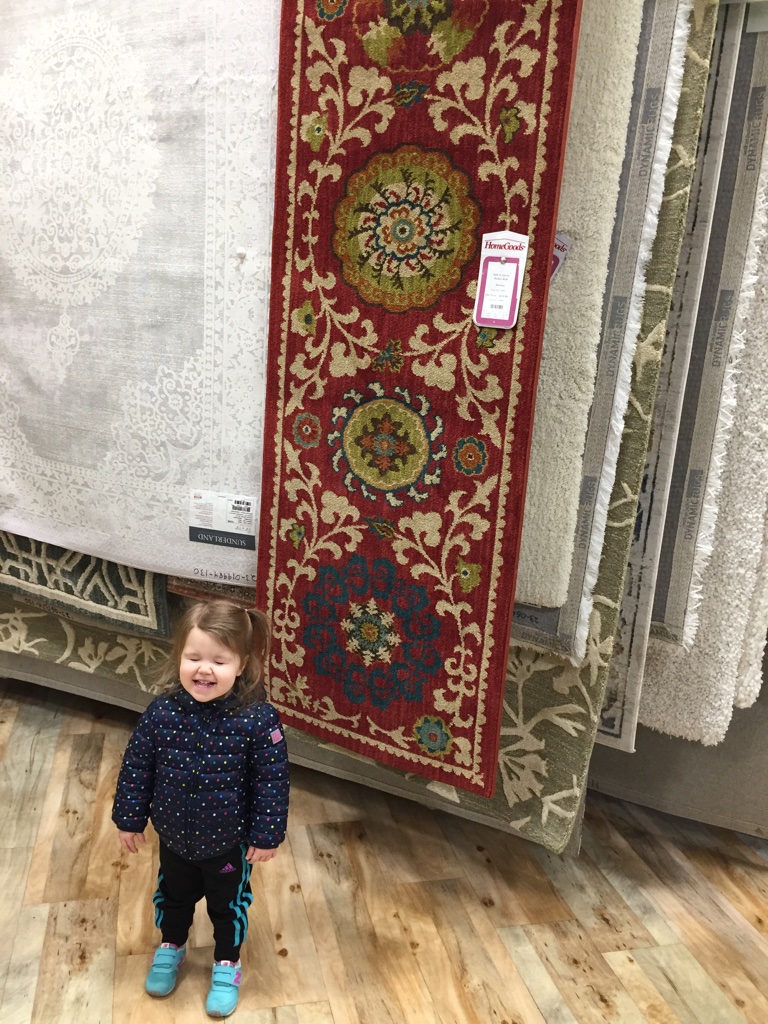 I don’t even know what to say, except that Lucy was cracking herself up. 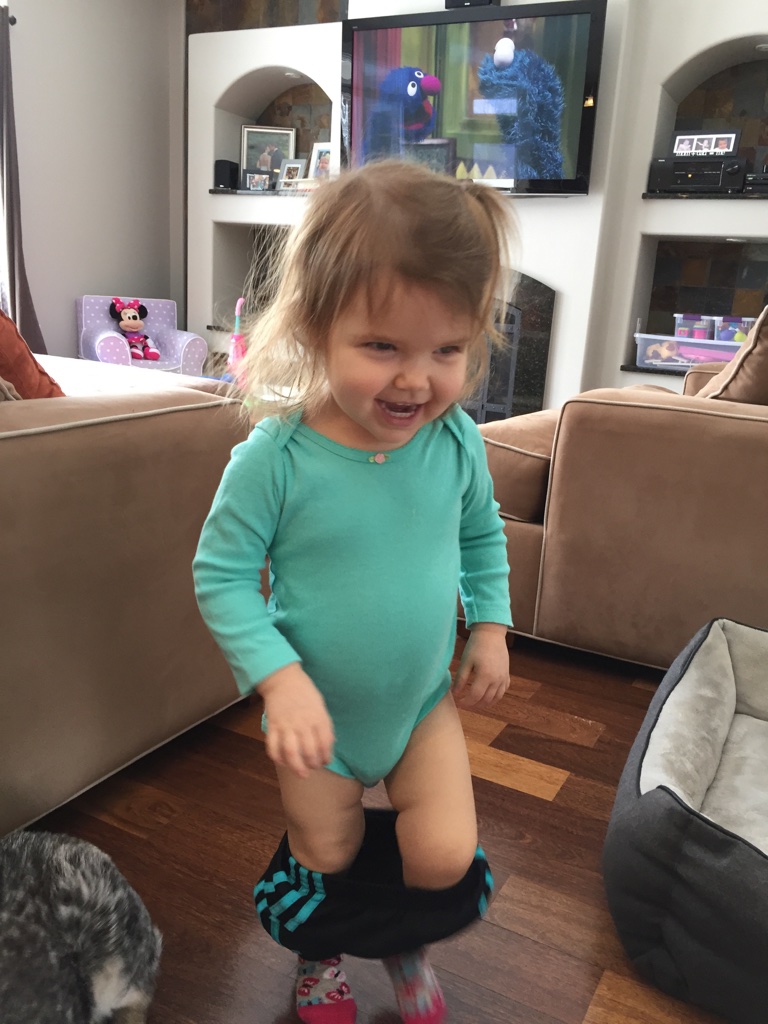 Watching the Wheels on the Bus video that Aunt Carla bought her for Christmas. There are a bunch of other songs and videos on the DVD, but Lucy only wants “bus!” 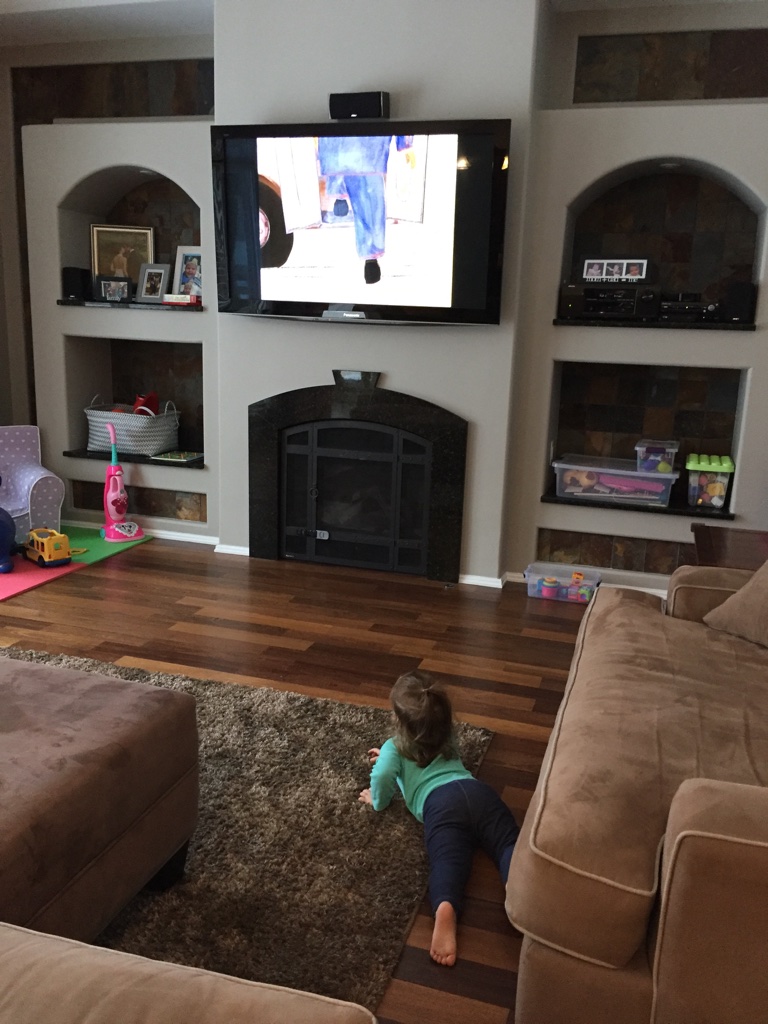 A good morning pic for Dadu. 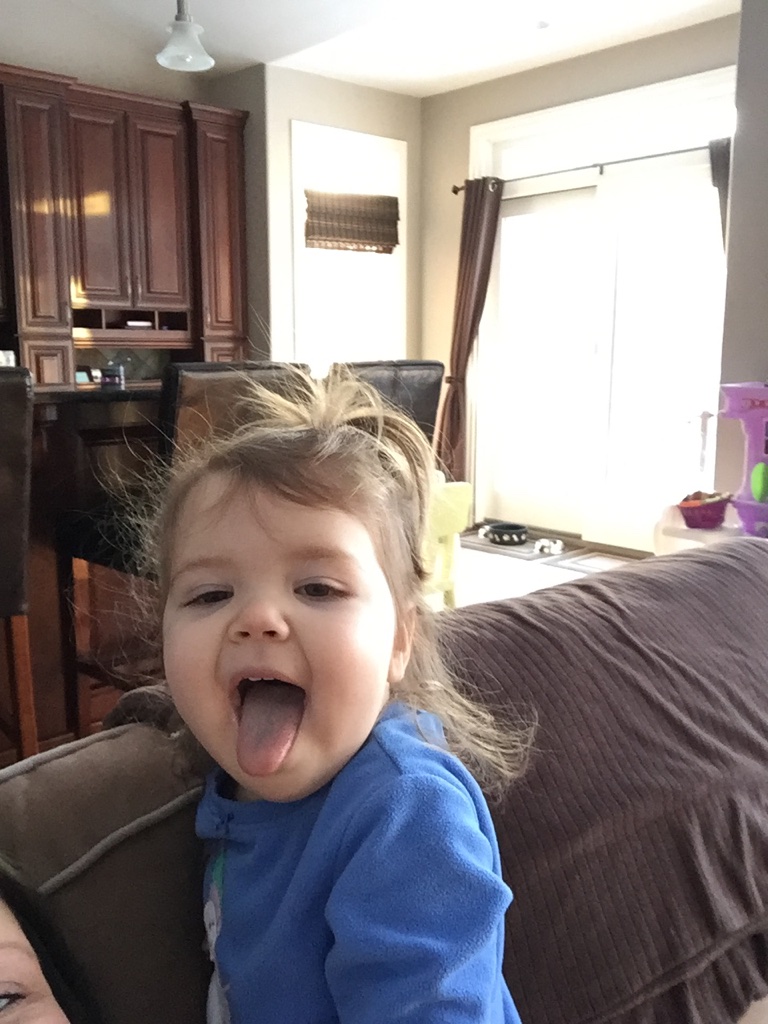 I attempted a Valentine’s Day photo shoot yesterday. It didn’t go that great. They were much easier when she wasn’t mobile! 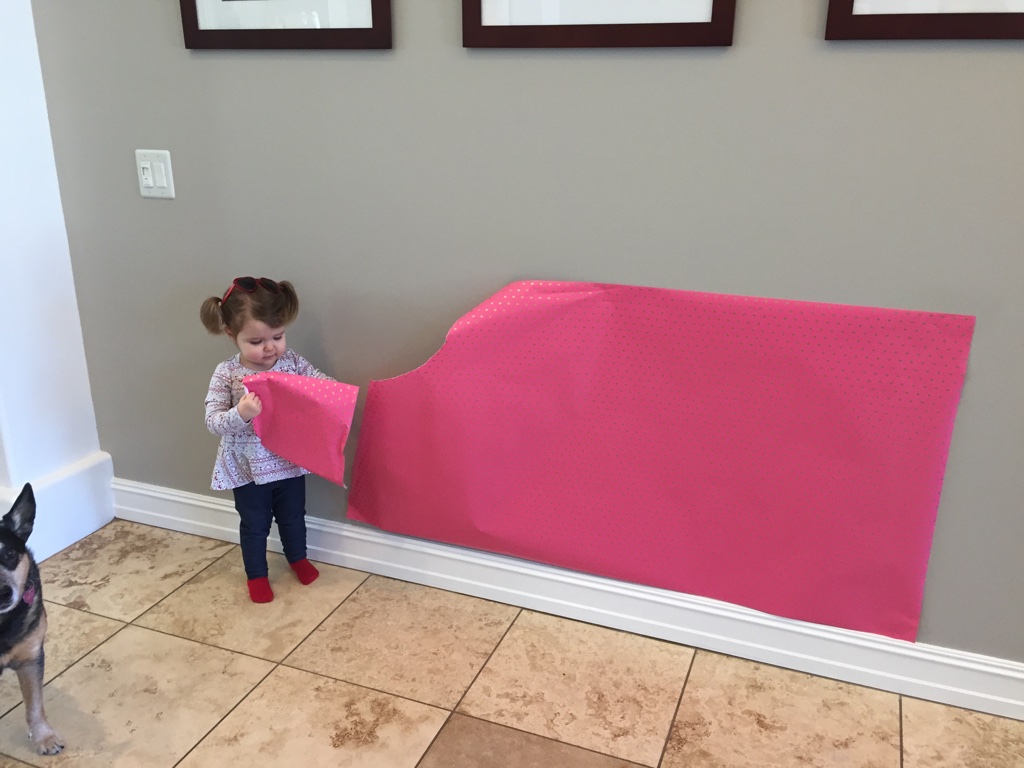 We did go out and play in the snow a little bit, but we also brought some snow back inside with us. 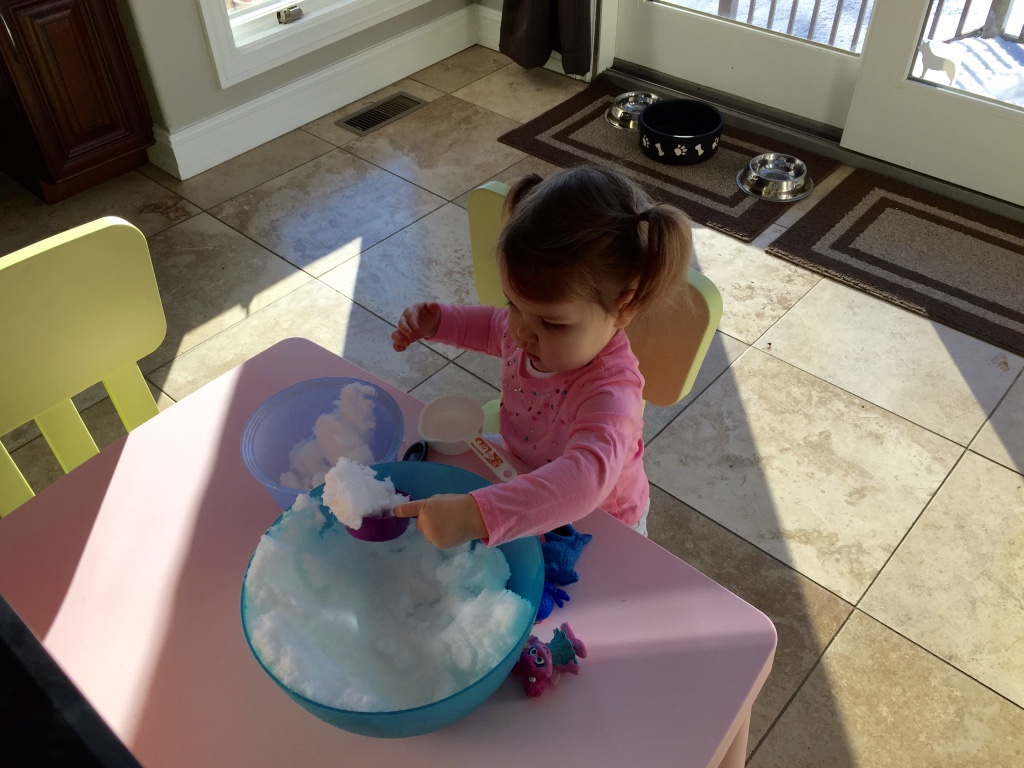 I finally got around to watching the first half of last week’s Scandal premiere. I must admit, I’m kind of over the long, drawn out, angry monologues. However, I have to keep watching to see who Olivia ends up with! #teamfitz 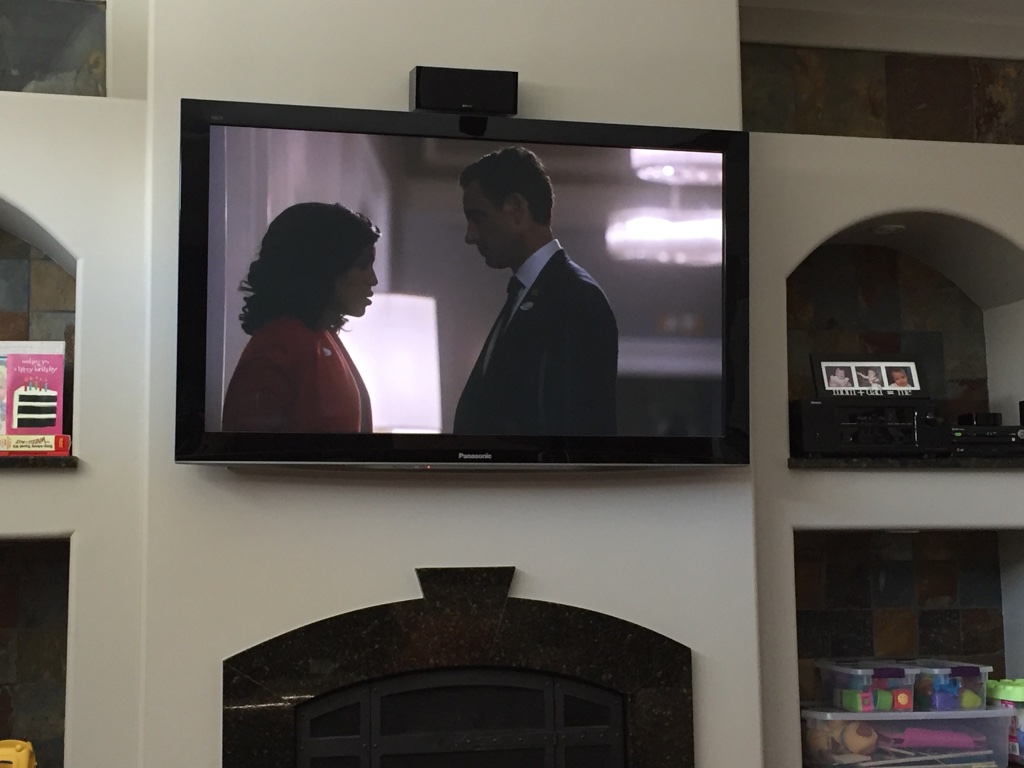 Remember the pregnancy insomnia I was talking about? Usually I just lay in bed and read on my phone to try and make myself tired, but sometimes I get bored with that so I turn to online shopping. It’s really in our bank account’s best interest if we nip this sleeping problem in the bud ASAP! Gymboree was having a big sale last week, and everything looked adorable at 3am! A few Valentine’s Day outfits for Lucy, and a ladybug themed purchase for Emily. 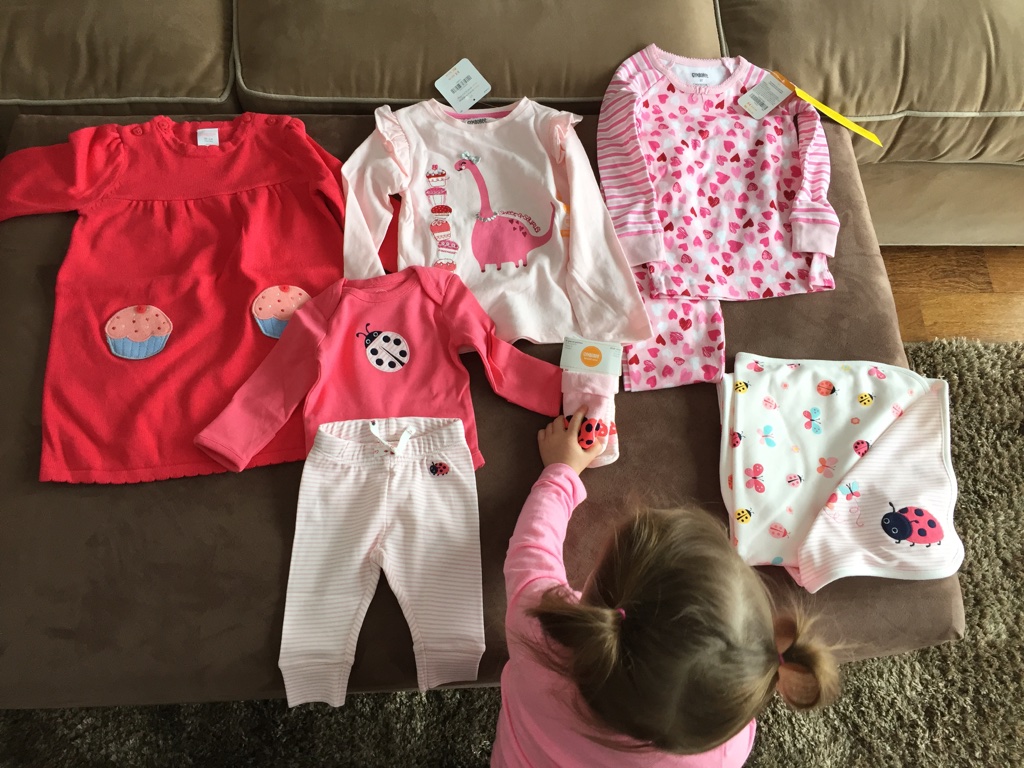 And that’s about it! We’ve had a busy week, and it will continue into the weekend. We have a play date on Friday morning, and then Sunday’s the big day . . . No, I’m not talking about the Super Bowl . . . it’s my birthday! We’re going to celebrate with our parents on Saturday, but I know Matty will take good care of me on Sunday  . . . until about 6pm.
Have a great weekend!
XOXO