How is the weekend over already? They go by too quickly!
Grandma Ri stayed with us for a few days. We went to Babies R Us on Thursday morning. Lucy refused to go in her stroller, but had no problem hopping in this one that was on clearance and cruising around the store. 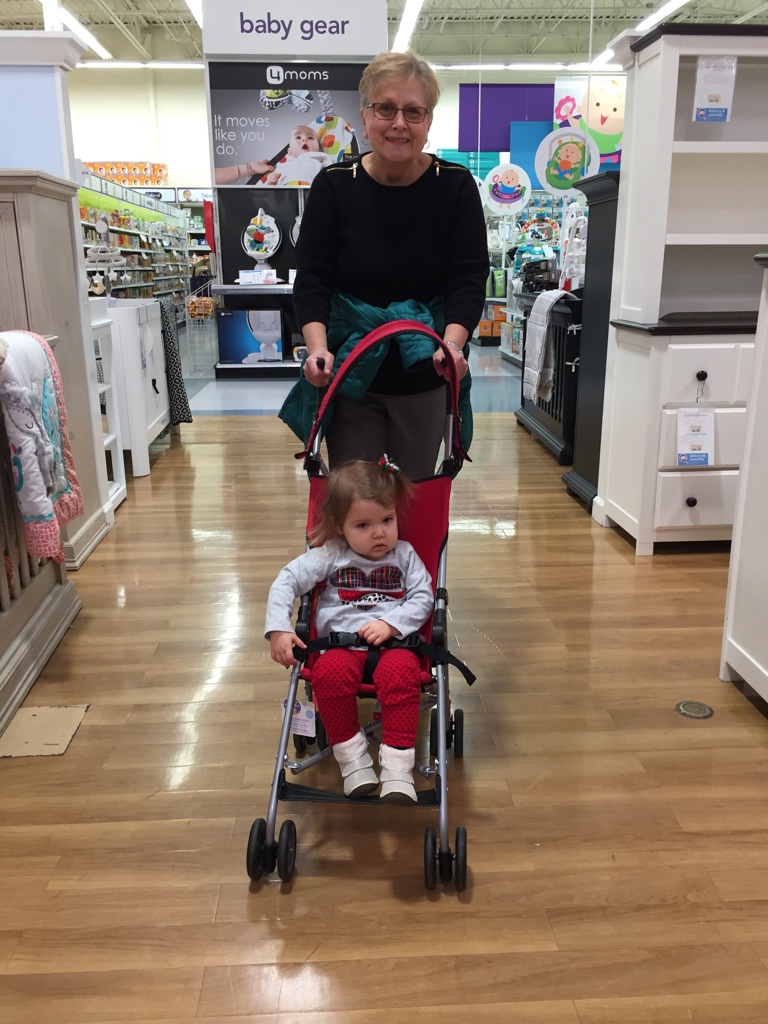 We got to the store right when they opened, and the weather was not that great, so we basically had the entire store to ourselves. I let Lucy have free reign in the toy department for a bit while Rita and I perused the selection. Lucy pulled not one but two of these Doc McStuffins kits off the shelf and was excited to look at them. I’m so happy that I’ve had one stashed away in our closet to give her for Christmas for over a month now! 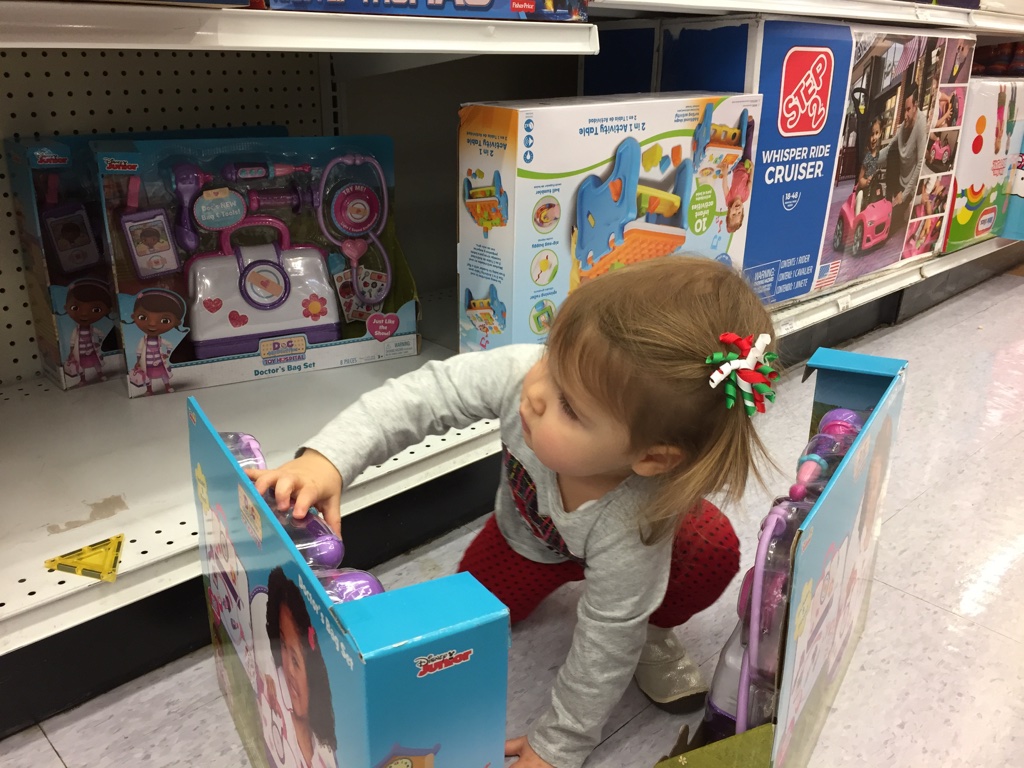 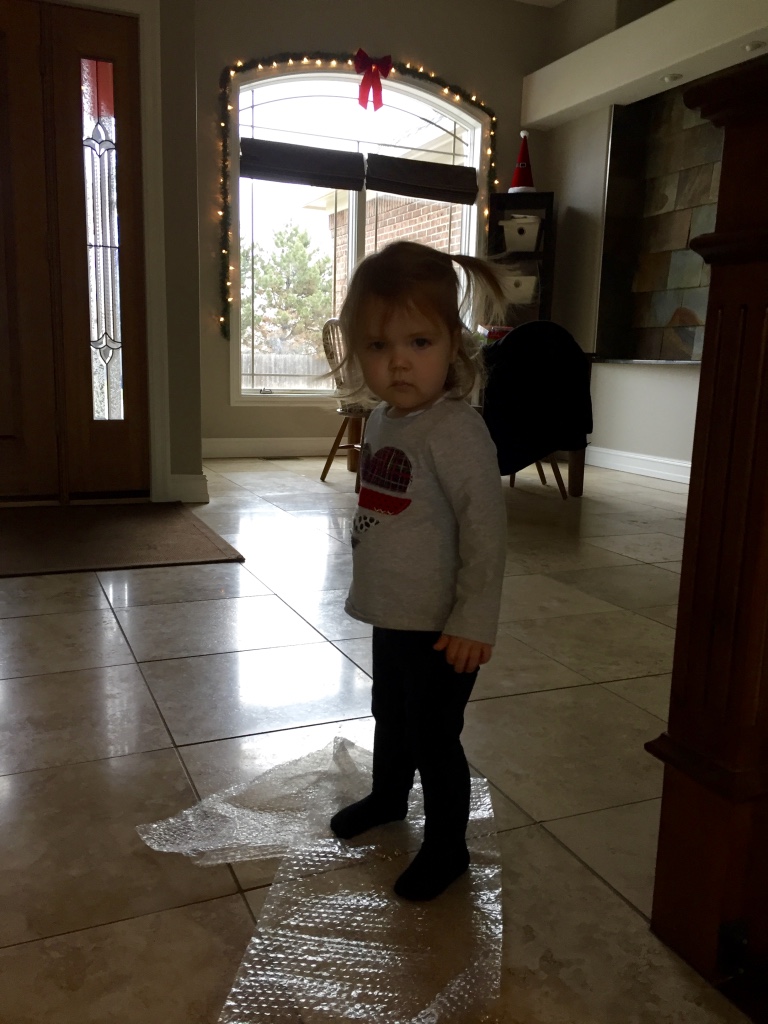 Thursday afternoon was snowy and cold, so we pulled out the paints to keep Lucy busy for a few minutes. This girl loves to get her hands messy. I just let her do her thing and then used cookie cutters to cut out shapes and make ornaments after it dried. 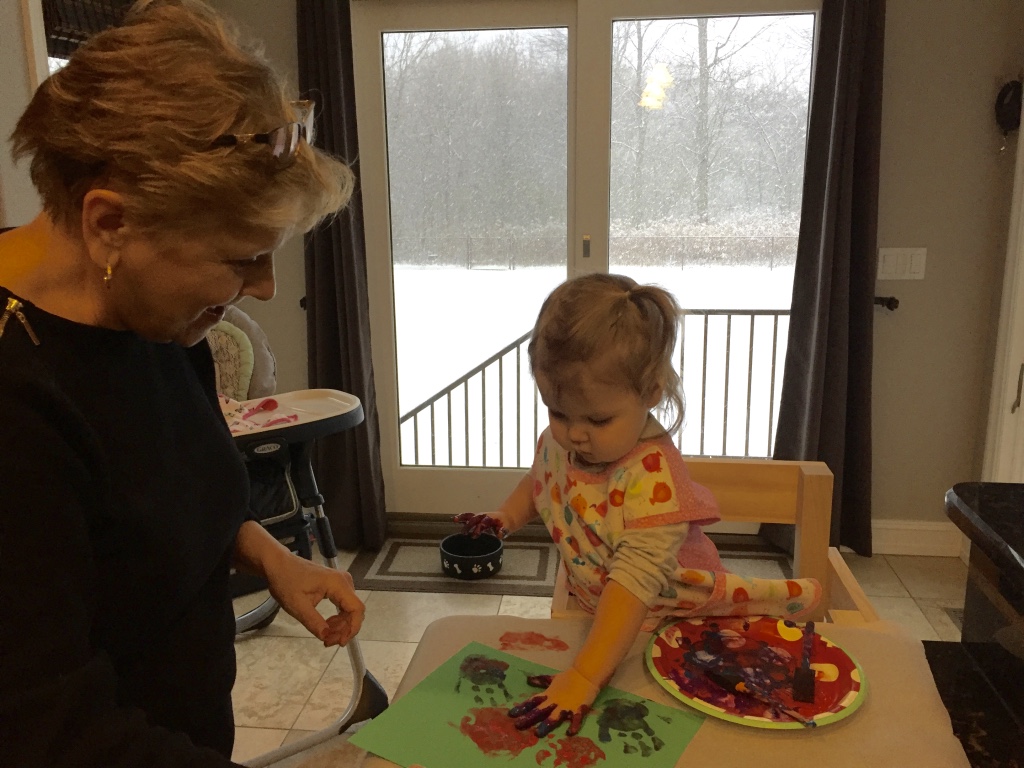 Then this happened, and I decided we had reached the end of our painting experience. 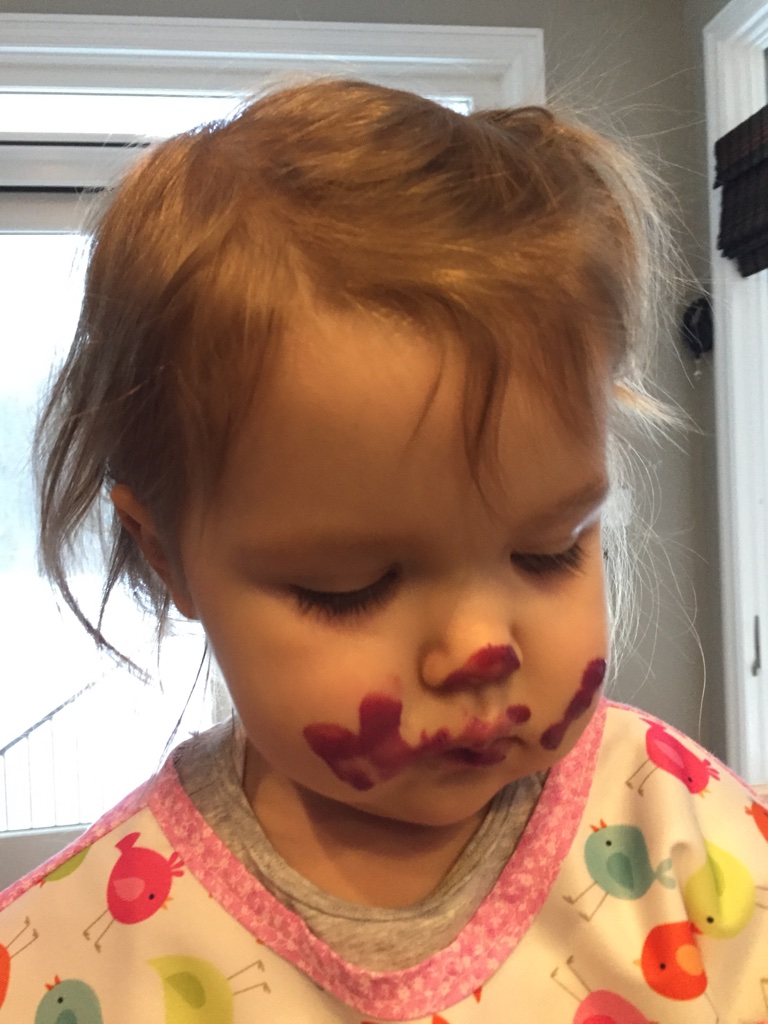 A gift arrived in the mail from my bestie who moved so very far away this year. What a great surprise! 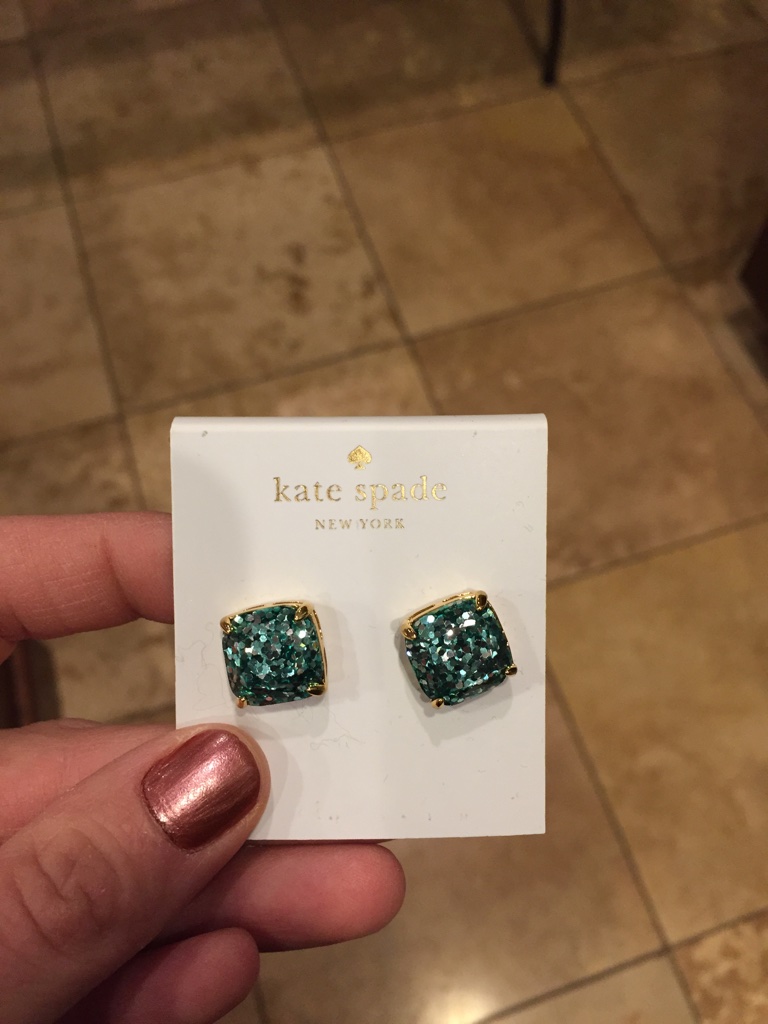 So this is the original costume that I purchased for Lucy from Once Upon a Child for Halloween. She wanted nothing to do with it, which is why I ended up going back for the owl. However, Friday morning she saw it in her closet and said, “Duck. On!” She put it right on and toddled around the house like the cutest little duck you’ve ever seen . . . two months too late! 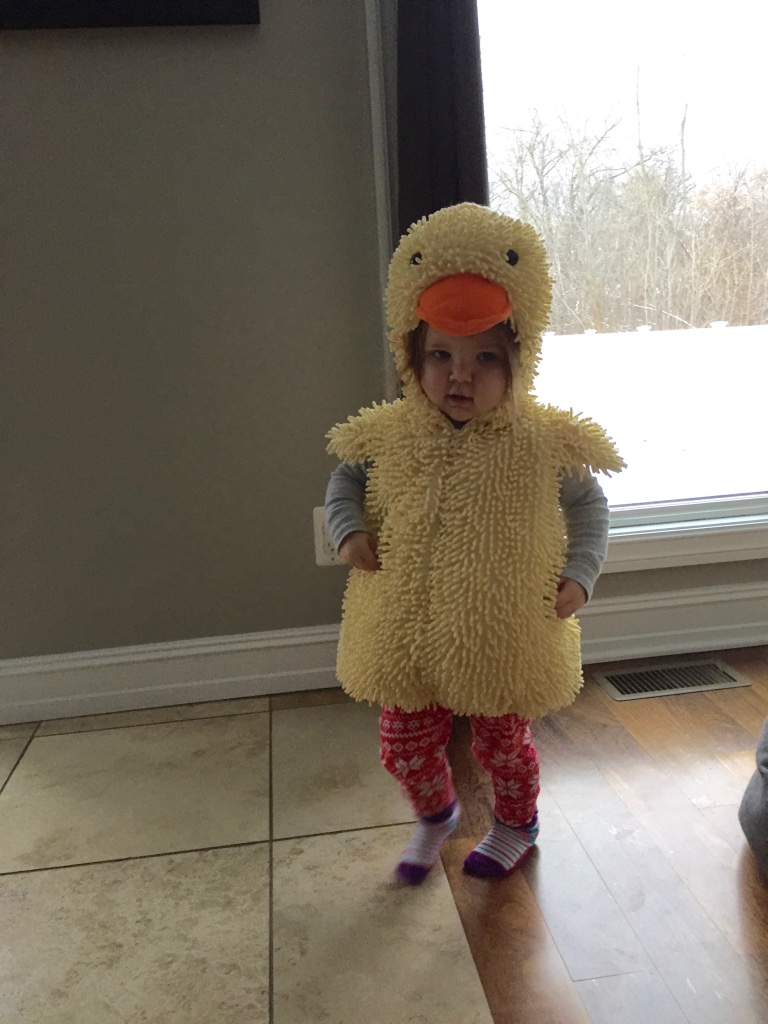 Friday morning we had a play date at Sky Zone, and I took zero pictures. Can you believe it?? Lucy was a little fussy and took a some time to warm up to jumping. Once she finally found her groove and was playing nicely, I didn’t want to chance walking away and grabbing my phone.
After the play date I drove her to my mom and dad’s where she spent the night. That means I had Friday afternoon to wrap gifts, clean the house, clean my car, and clean Lucy’s room. It was wonderful and oh so productive! 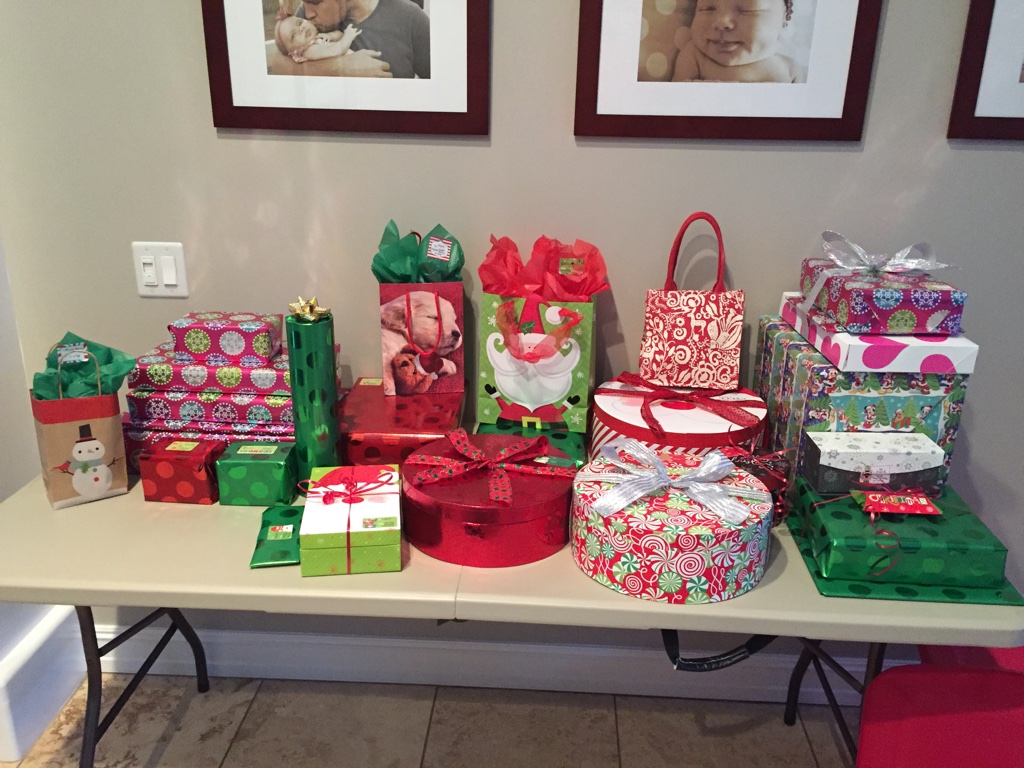 Saturday morning we were up bright and early, because apparently our internal clocks didn’t care that Lucy wasn’t home . . . they are set to wake up by 7am on weekends. We spent the entire morning cleaning out and organizing our basement. It felt great to have that done! Afterward, we went for a late lunch at Batch Brewery in Detroit. The food was delicious, and I even convinced Matty to play a few rounds of Guess Who with me. I really wanted to get Herman, but no one ever picked his card. 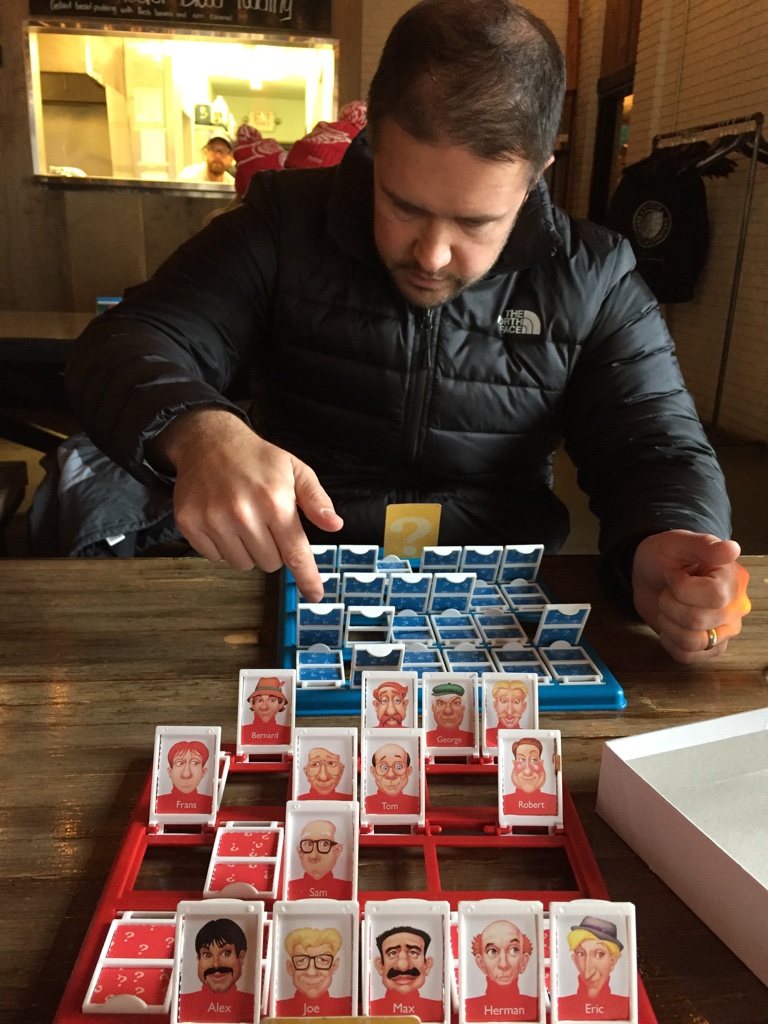 After lunch, we went to pick up Lucy and headed to Fantasyland with my parents, Carla, and Gordie. When we picked her up, Lucy was wearing this shirt that my dad bought for her over her outfit. 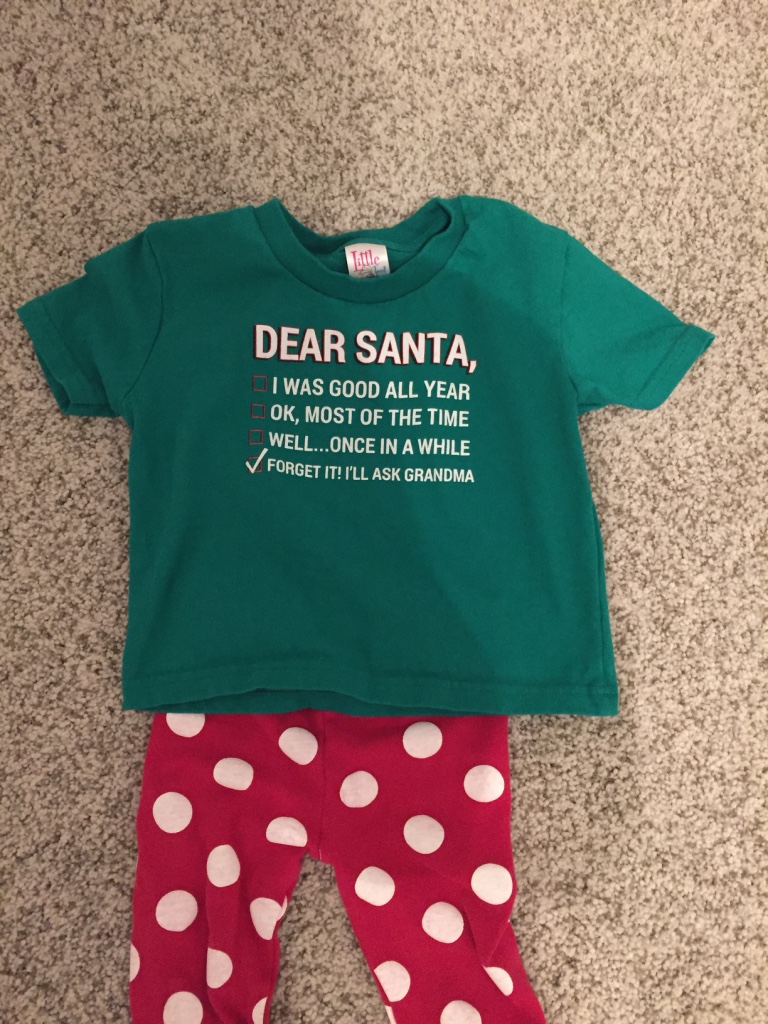 Lucy was so intrigued by all of the decorations and displays at Fantasyland. Note: she was wearing a cute Christmas outfit, but it was somewhat chilly inside and it was a major fight to get her jacket on in the first place, so we decided to just leave it on her. There were signs all around that said “Santa’s watching you, please don’t touch the displays.” Here’s Lucy showing Santa who’s in charge. 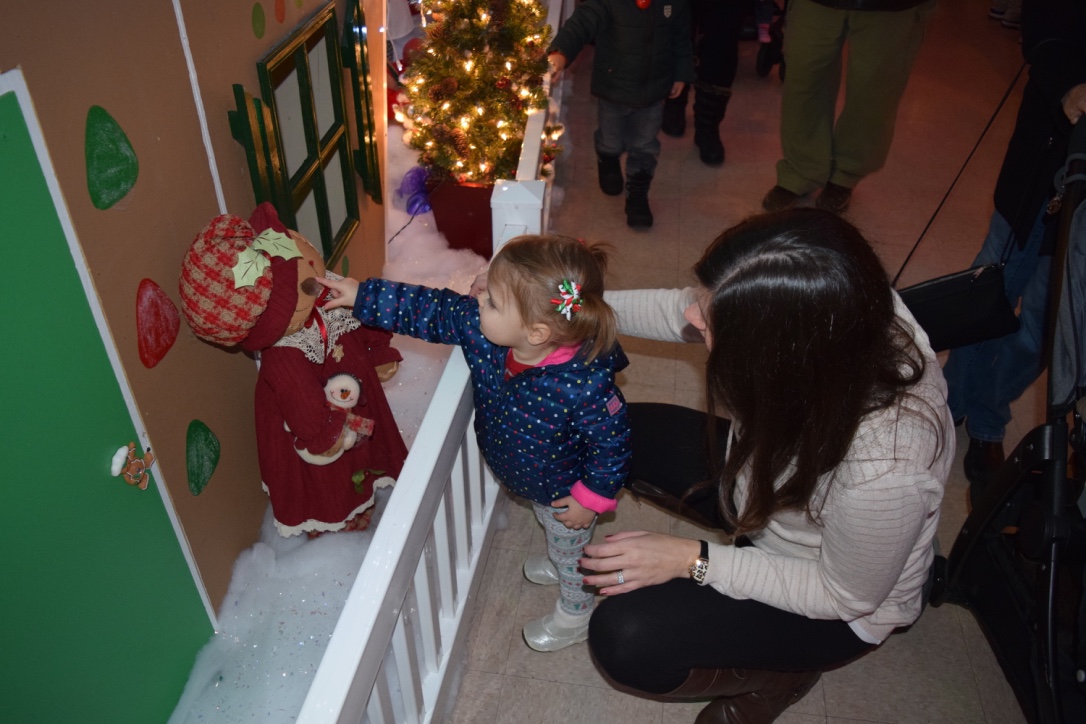 She basically pointed her way throughout the entire place. 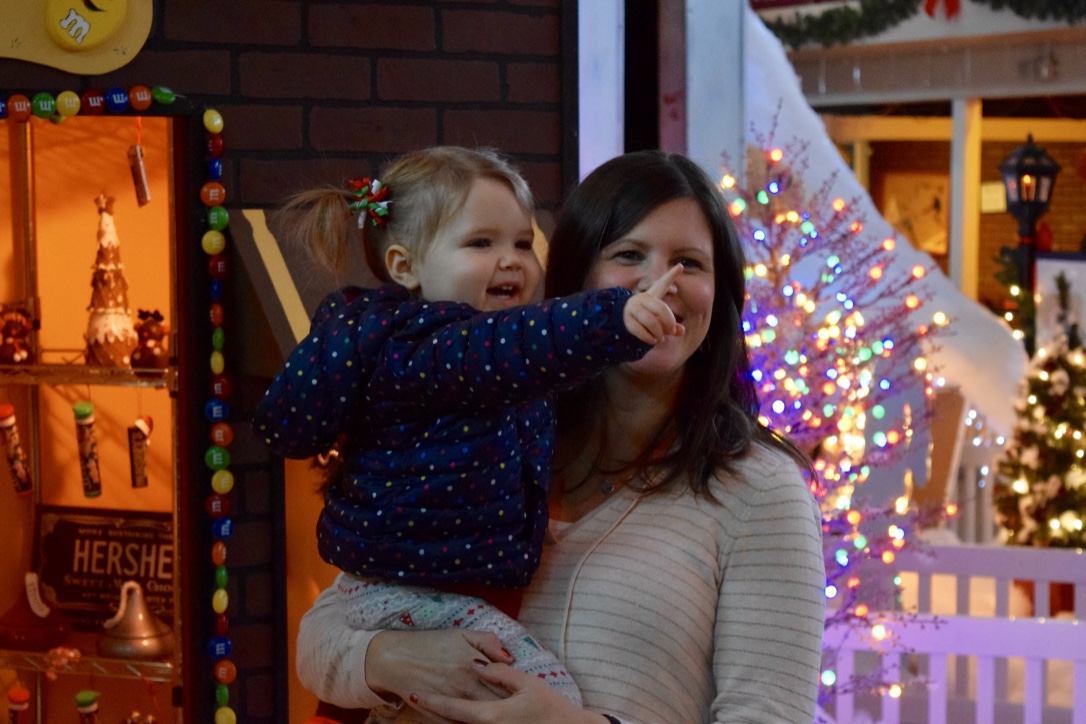 My selfie didn’t turn out, but this little gem that Matty took did. 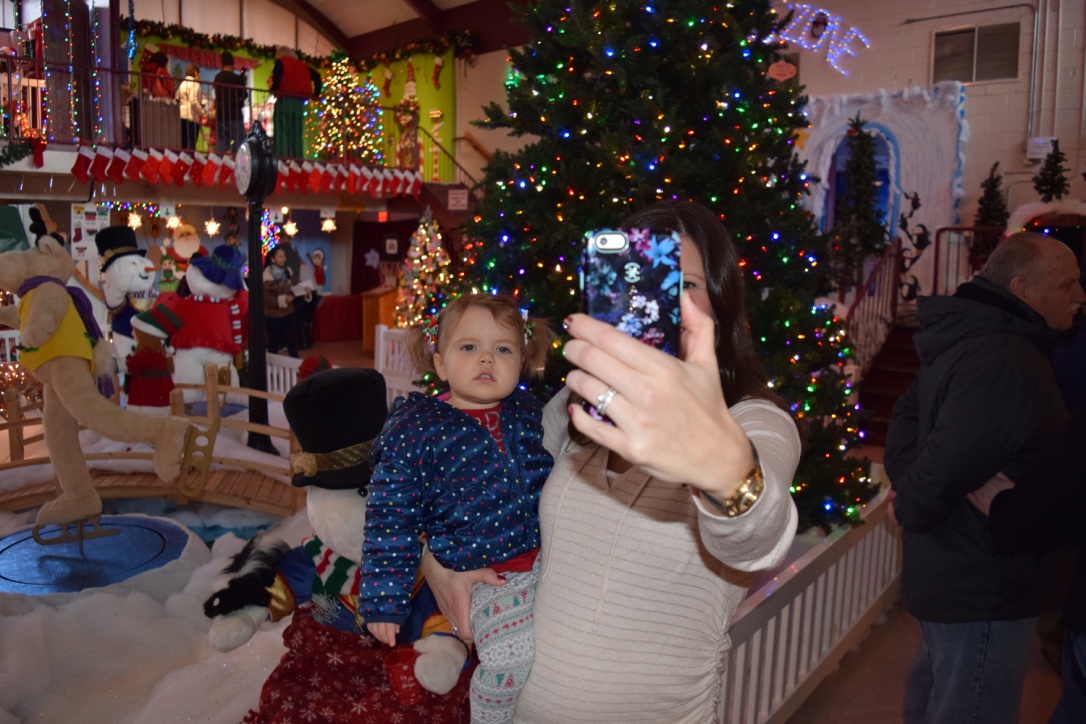 The grandparents and their littles. 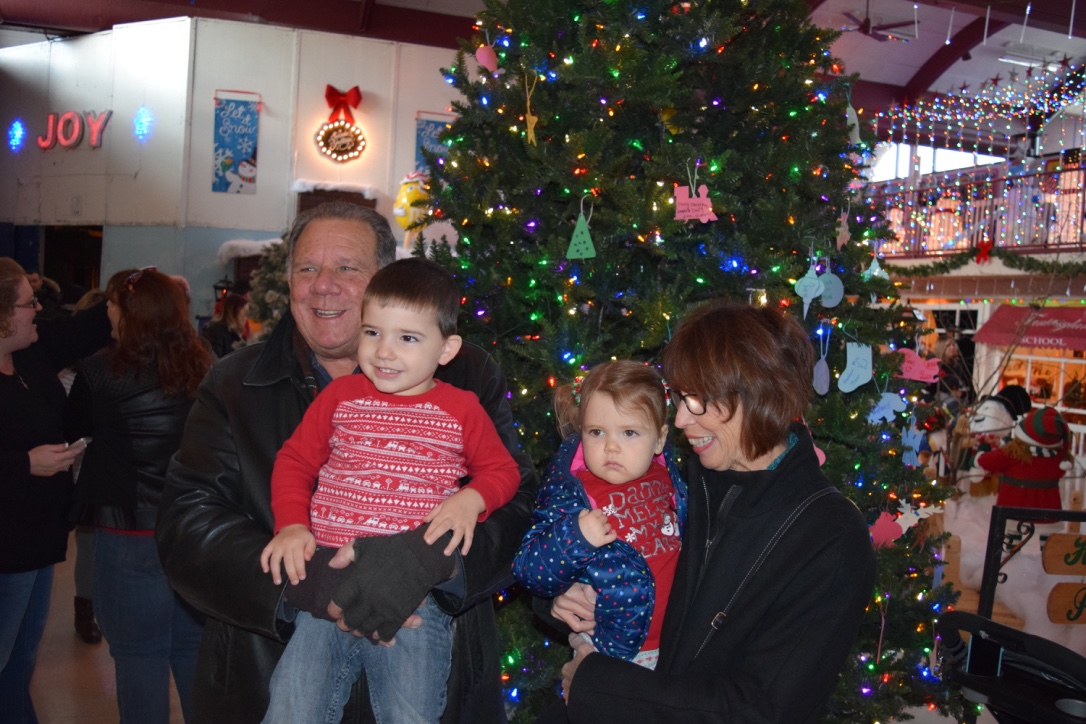 Loving on my girl in the polar bear exhibit. 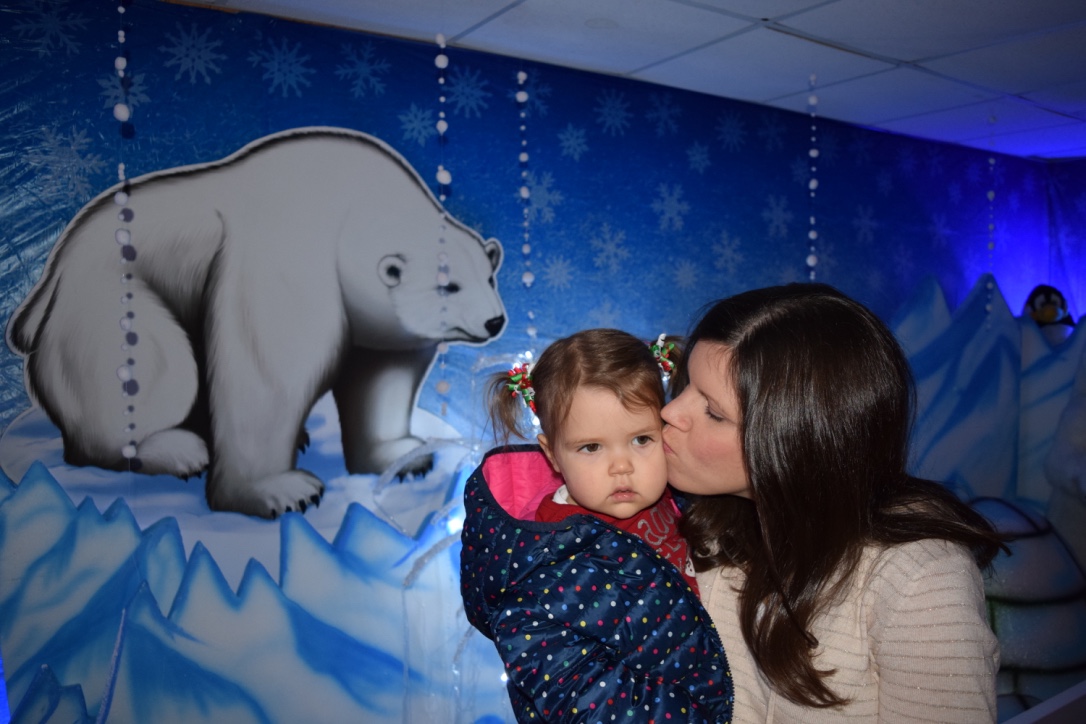 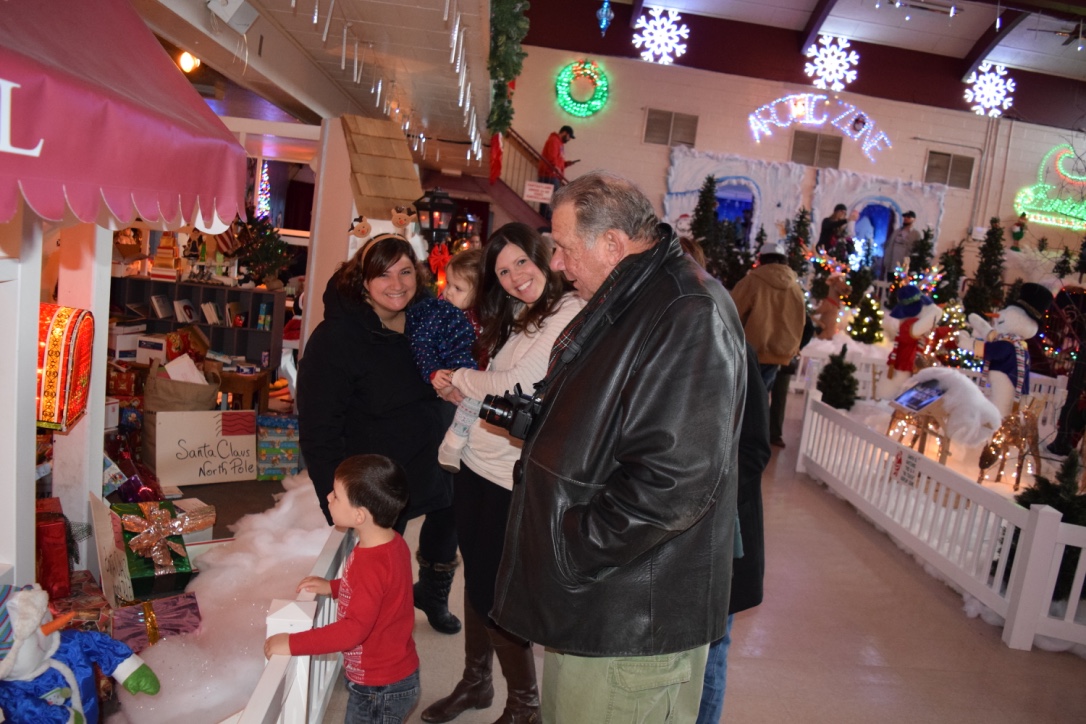 While cleaning out the basement, I found these gingerbread pancake molds that I’d never used. Sunday morning seemed like as good a time as any. I was so excited to make them for Lucy, but they were a major breakfast fail! 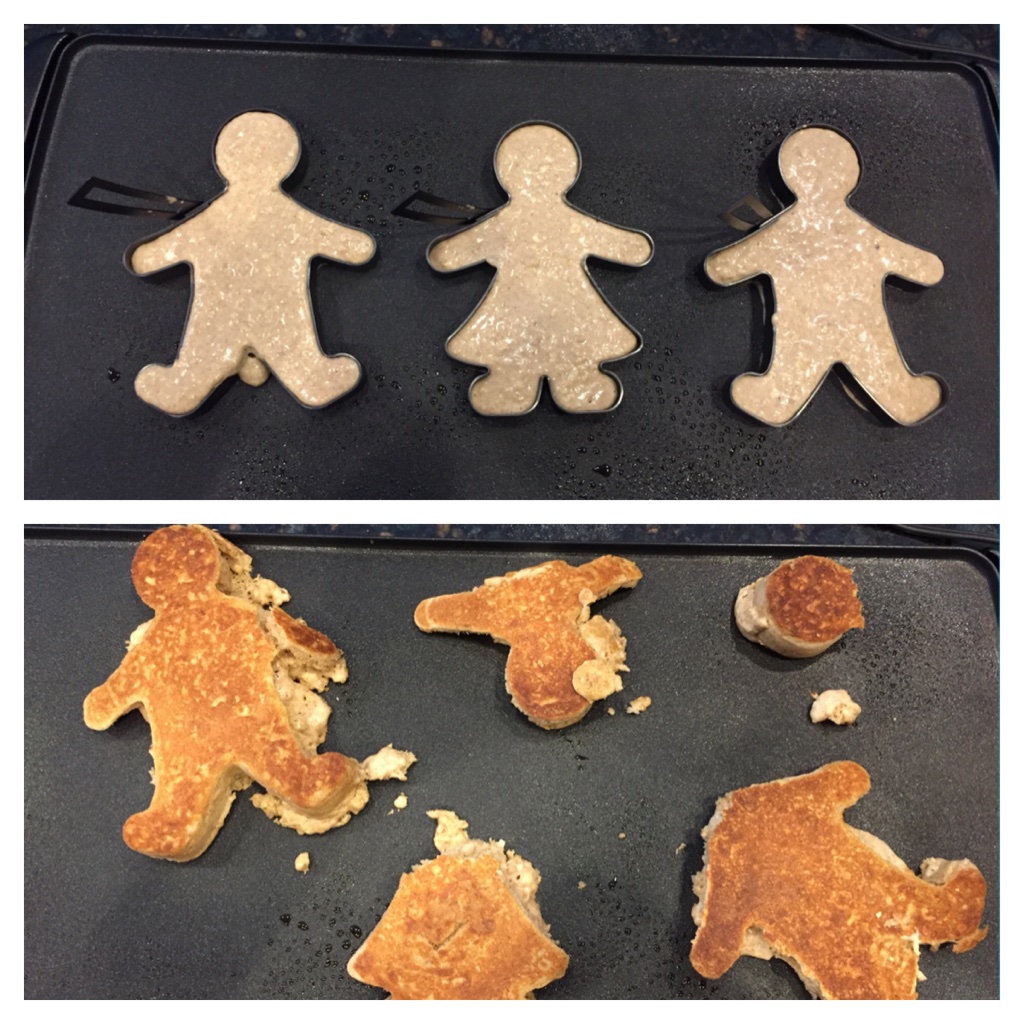 They still tasted good, but Lucy wasn’t having it and painted herself with ate yogurt and eggs instead. 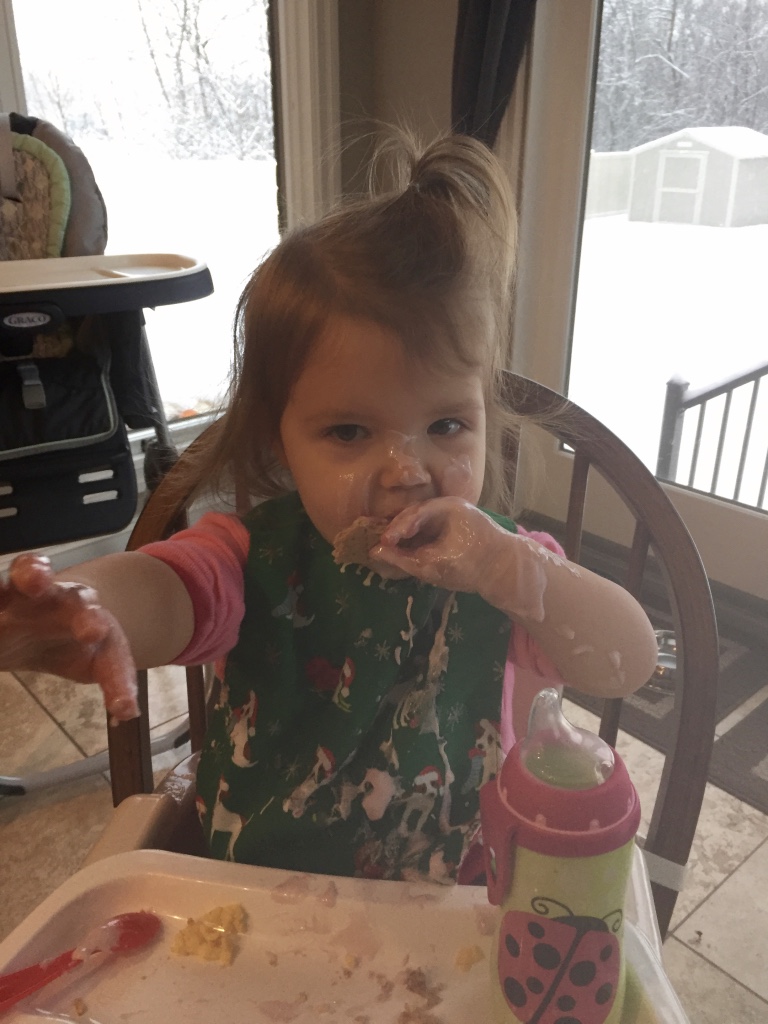 Sunday was super snowy so we stayed home all day. It was kind of a strange day for Lucy. She didn’t really play with any of her toys, but found other ways to entertain herself. While I cleaned up the kitchen after breakfast, she spent about 20 minutes hiding her socks in the couch pillows and then squealing when she found them. She had the best time with herself! 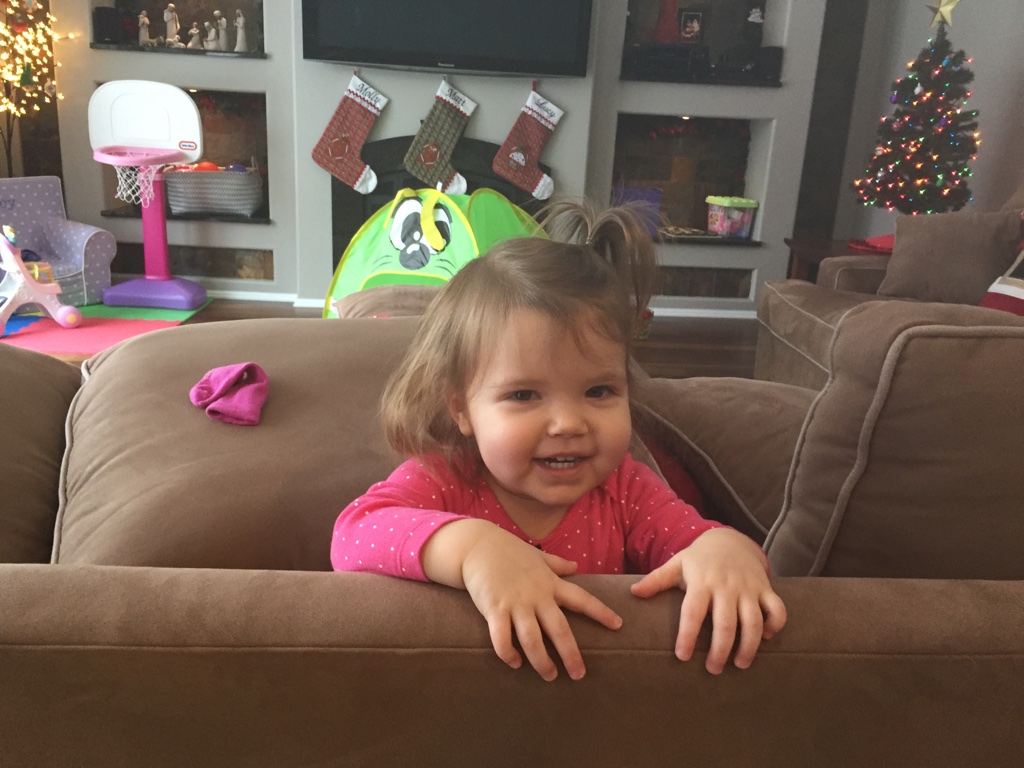 Once the kitchen was clean, she came in and said, “cook!” Of course. So I gave her a bowl with some oats and little noodles in it, some cups, and a smaller bowl. She probably played this way for another good 20 minutes or so while I made our grocery list. 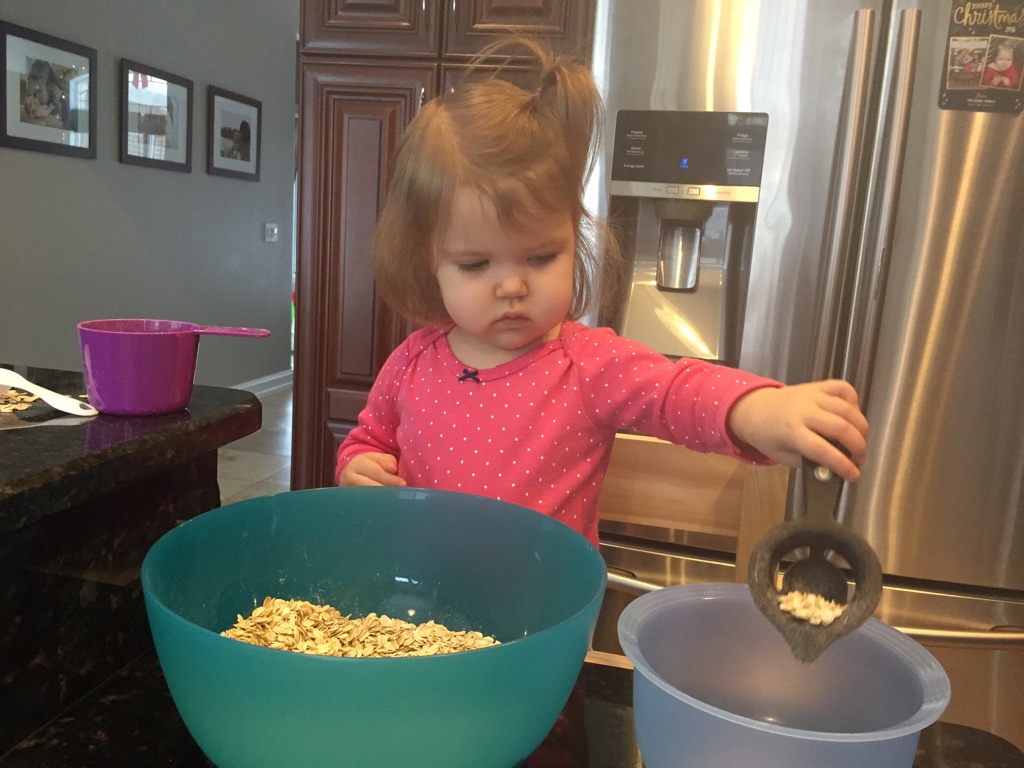 Then she started trying to pour from one bowl to another and things got messy, but she was still having a good time so we let it go. Matty took a little unexciting video.

If you recall from last weekend, Lucy was sick and ended up napping on me for an hour and a half. She wasn’t sick this weekend, but woke up a little early from her regular nap. I, on the other hand, was still going strong with my nap so Matty was kind enough to get her and bring her to me on the couch. She snoozed for about 15 more minutes. I think we’ve started a new Sunday tradition. 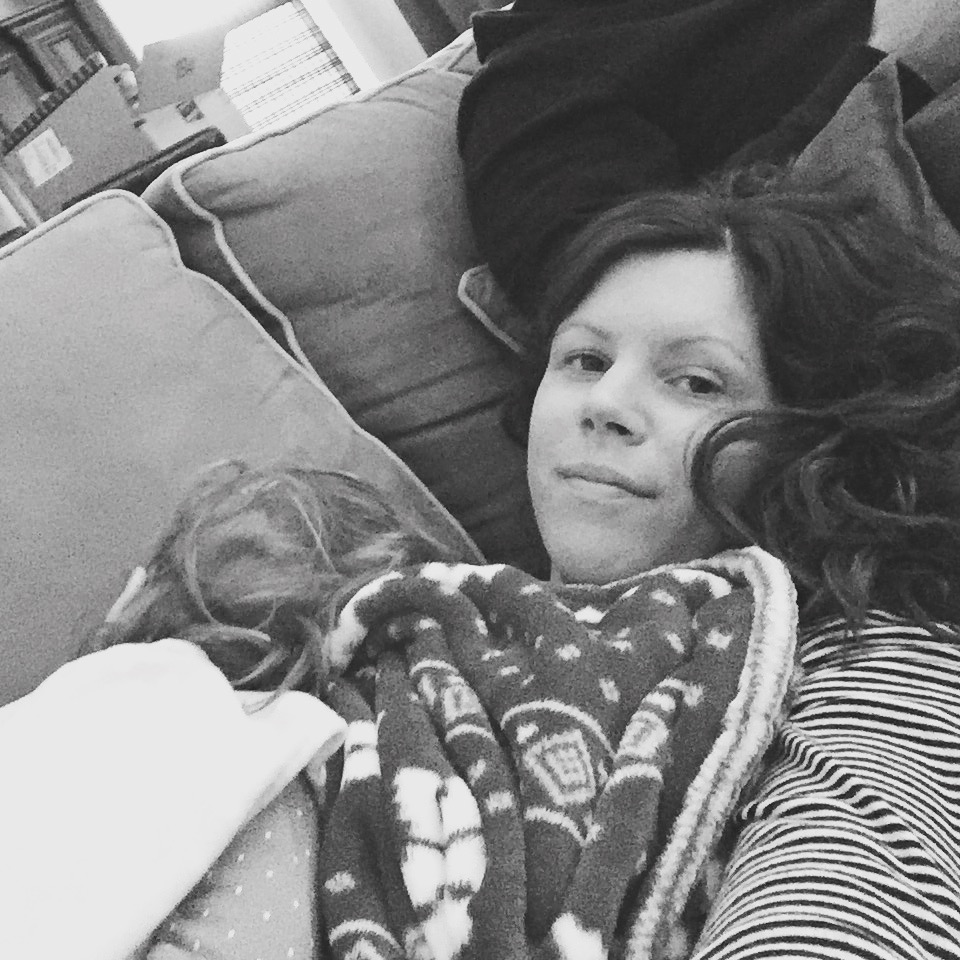 Are we the worst parents ever for not taking Lucy out to play in the snow today? At first I didn’t think so, but now I’m seeing pics of everyone playing with their kiddos in the snow and I feel bad. I’m justifying it by saying we don’t have a sled yet, so it wouldn’t have been that fun. Maybe I’ll take her out tomorrow. Then again, maybe not. 😉 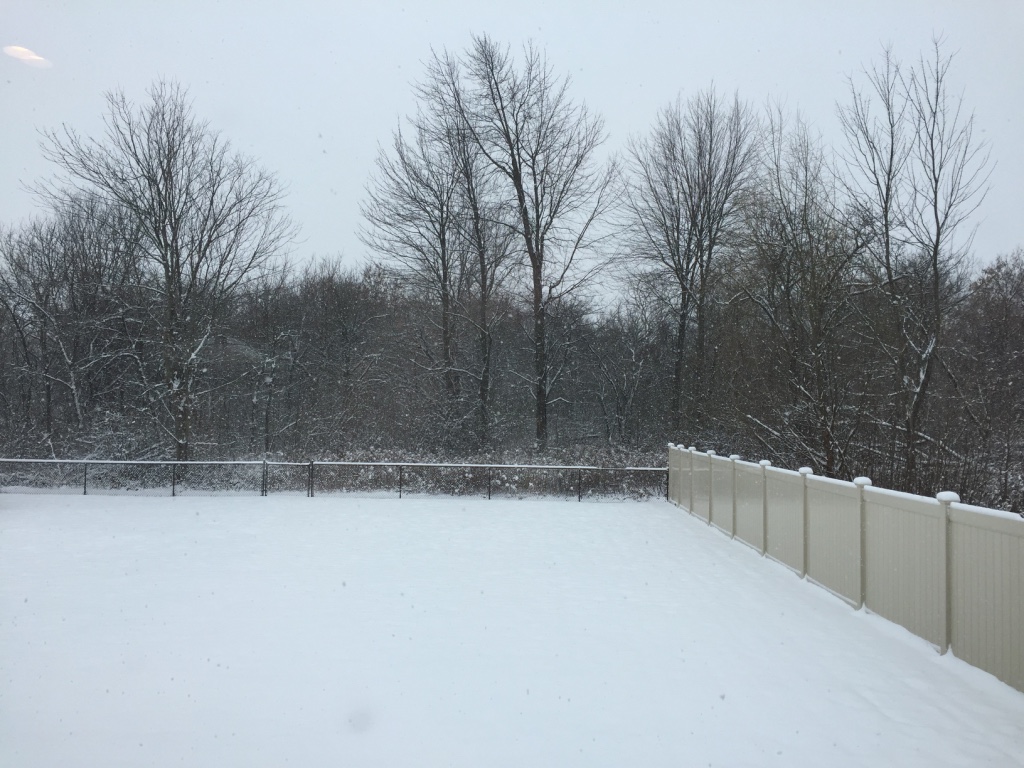 Lucy, Daddy, and Patch played some matching games on the iPad after dinner. 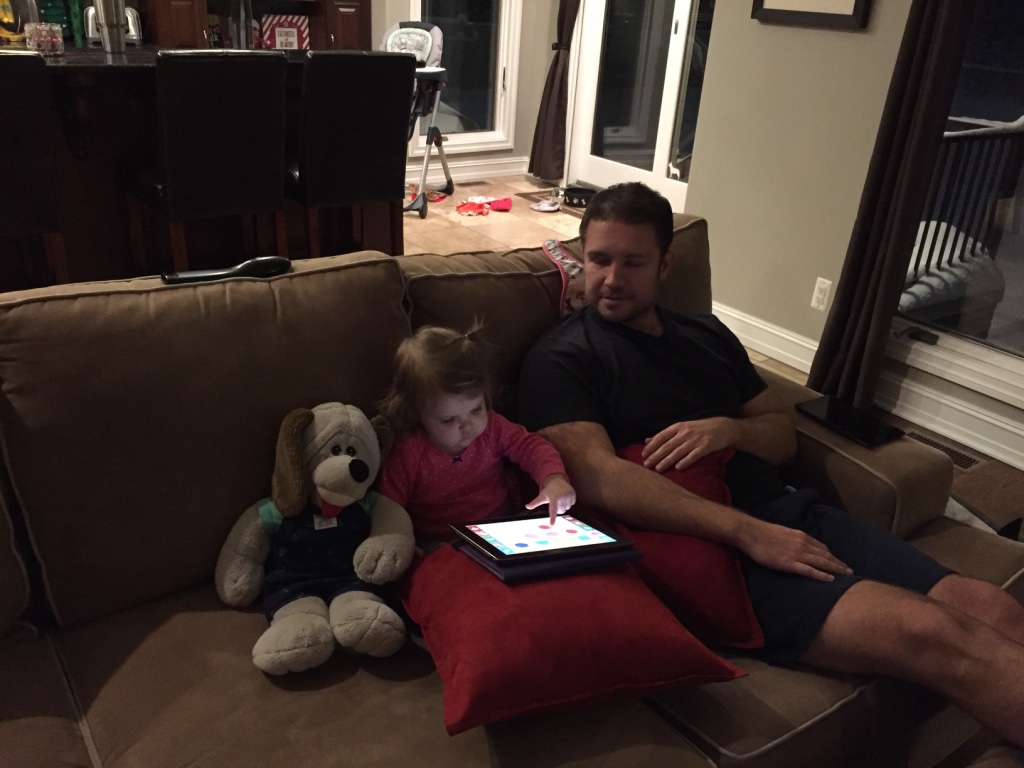 And that was our weekend. This is Matty’s last week of work before he’s off for TWO WEEKS! I can’t wait! However, we don’t have many plans for this week, so the days will probably crawwwl by.
Have a good week. Stay warm!
XOXO