Life lately has been pretty low key around here . . . since my last post two days ago!
Lucy has been really into hats lately. Sometimes she’ll pile two or three on at a time. This was her hat of choice while waiting for me to make her breakfast the other morning. 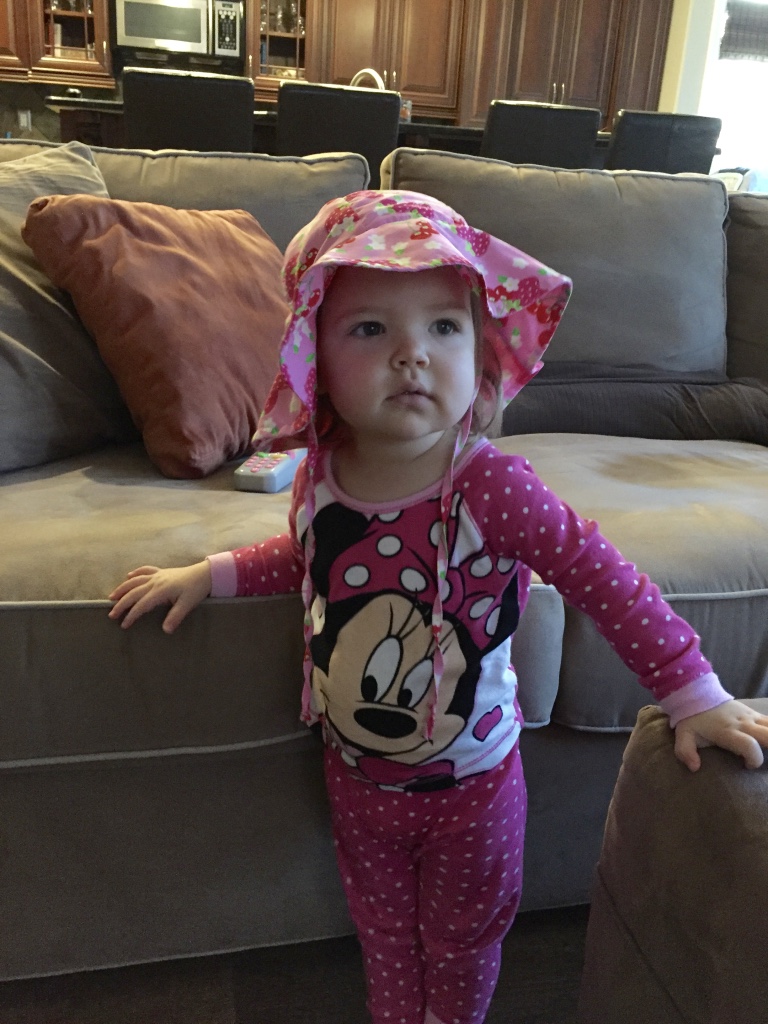 Later that day she decided to sport the backward baseball cap look. No matter how many times I try to show her that you pull a wagon, she insists on pushing it like her lawnmower. 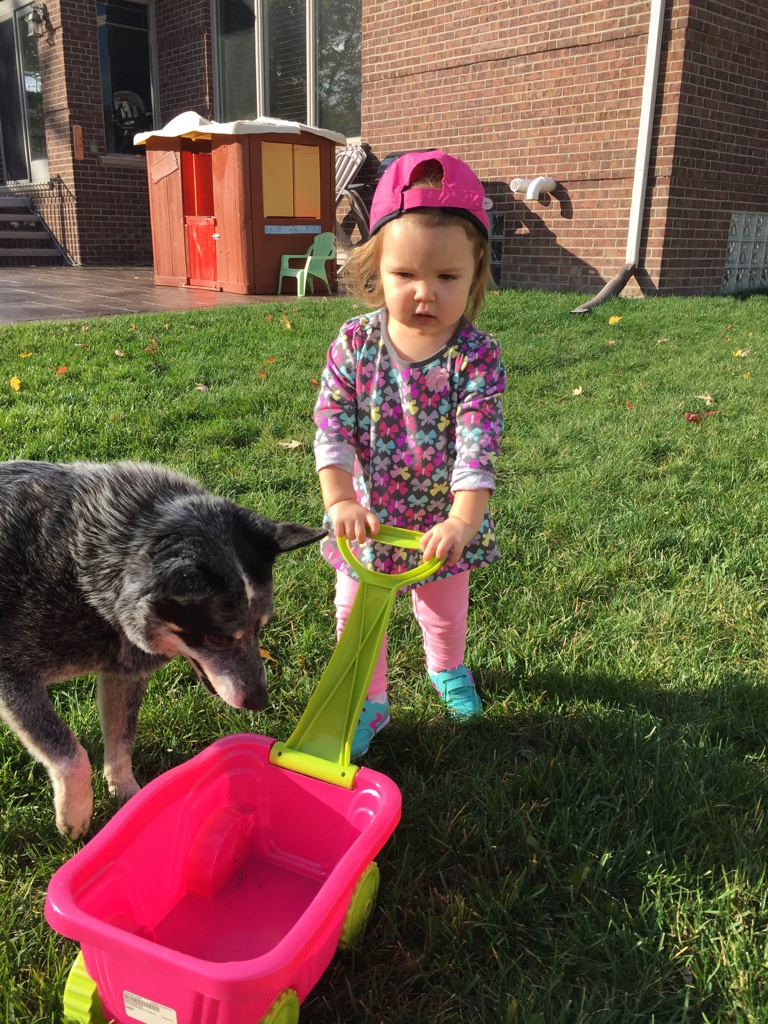 Had a little car trouble at the park, so she got out and pushed 😉 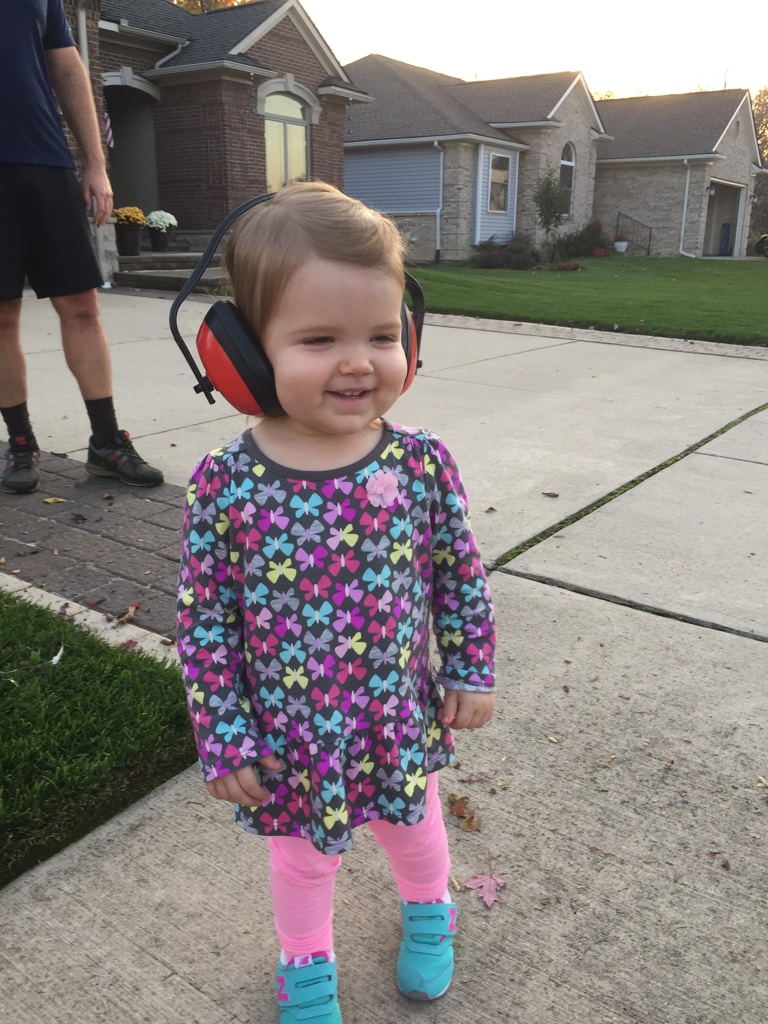 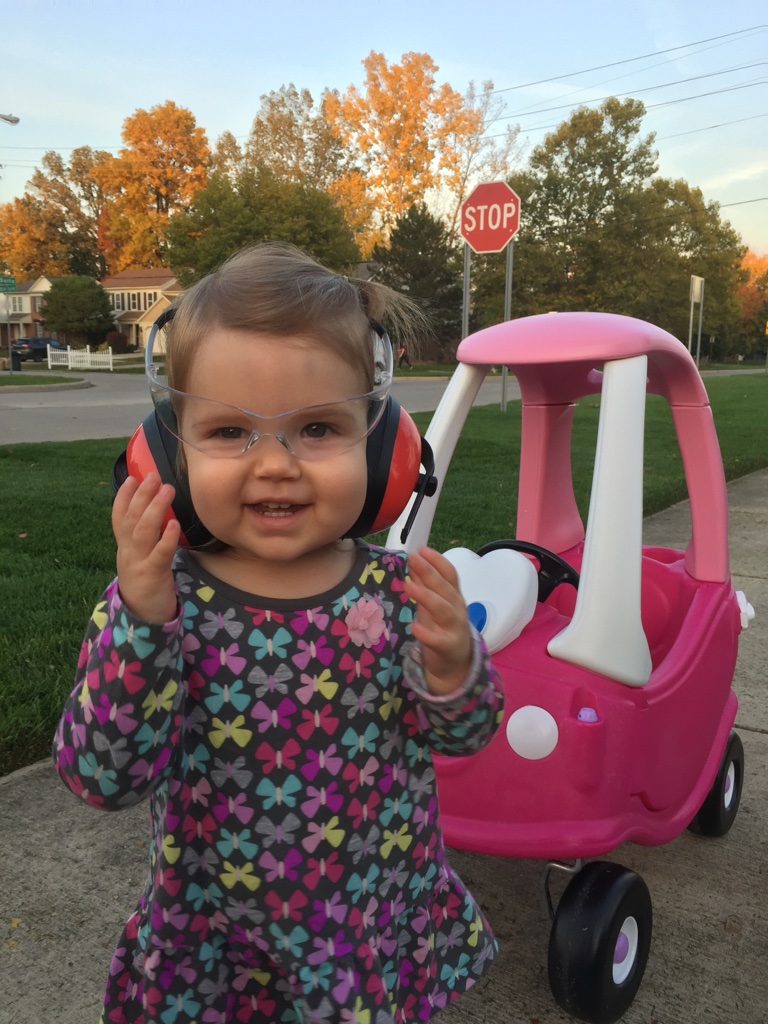 A rare picture of the two dogs close together. 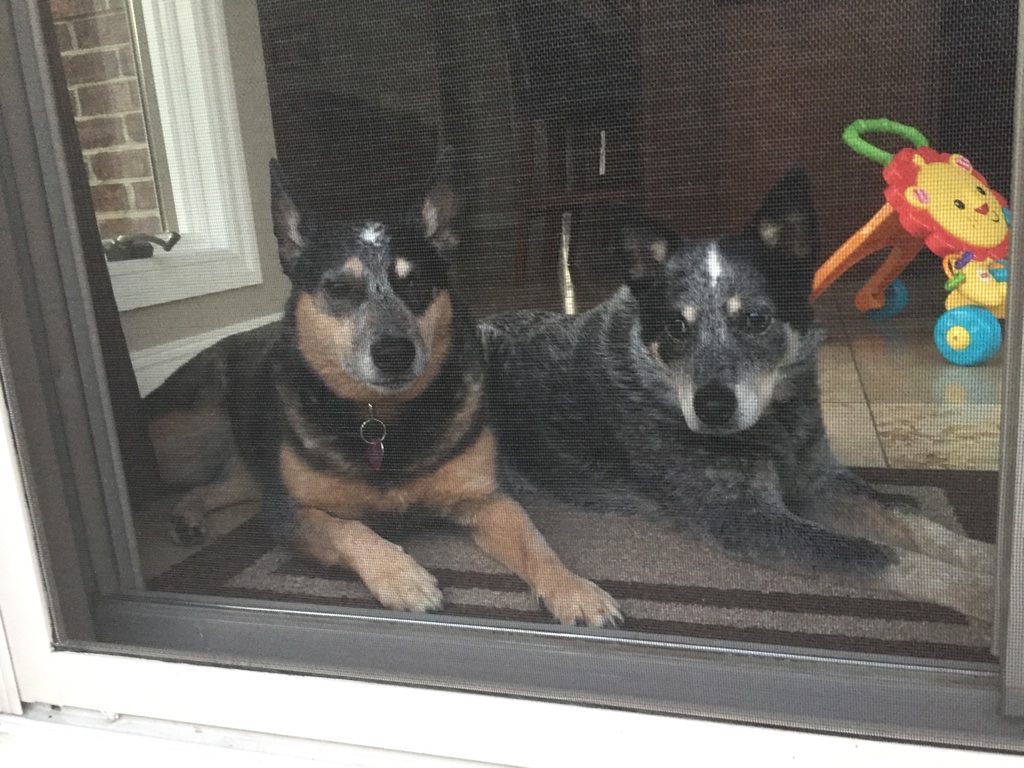 See what I mean about the hats? The sunglasses are a nice touch. 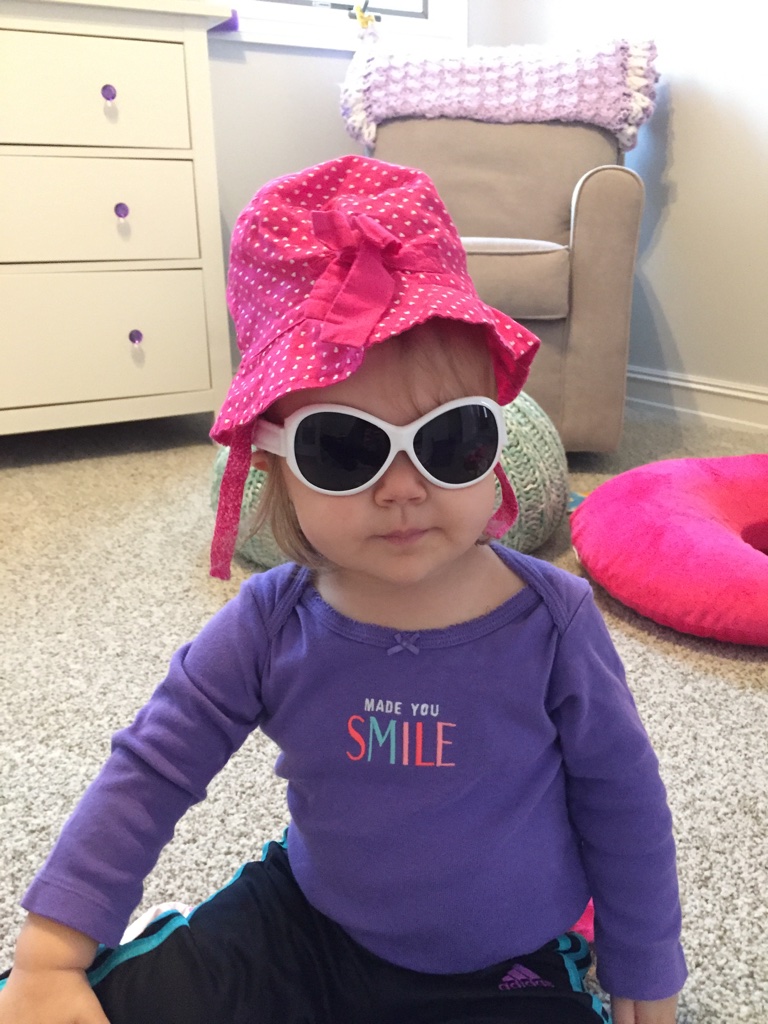 So I know I’ve been complaining informing you a lot about Lucy’s less than desirable carseat and store behavior lately. I like to give credit where credit is due, and we had a very enjoyable little shopping trip yesterday. Getting her in the carseat wasn’t crying free, but it was considerably easier than it has been. She toddled along next to me or pushed her stroller through Old Navy, Kohls, and Target (all in the same strip mall so that I didn’t have to put her back in the car), and even rode in her stroller for about fifteen minutes while she ate a snack. I was able to look at things and purchase things and didn’t go home feeling frazzled at all. Woo hoo! She was obsessed with the doggie mannequin at Old Navy, which was pretty cute. 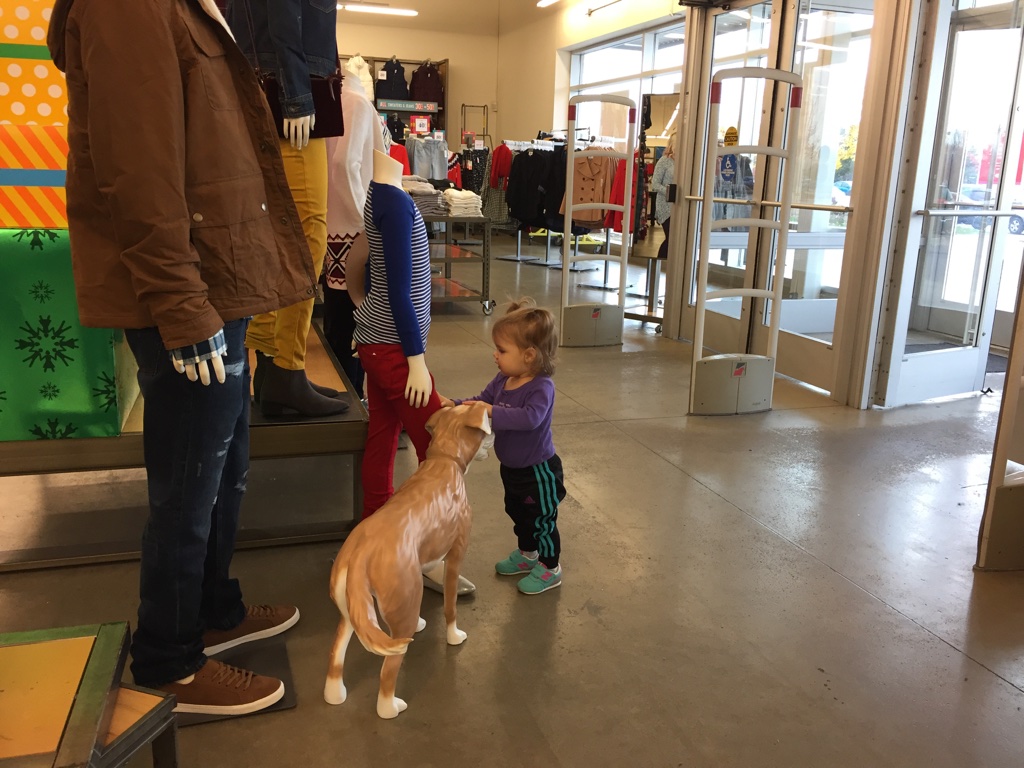 Now forget everything I just said and let me tell you about the nightmare that is Lu’s bedtime routine lately. She gets a bath every night and handles that just fine. But from the moment she gets out of the bath until the time Matty rocks her and give her a bottle, it’s torture for all three of us. We’ve tried giving her time to toddle around naked, read books, play for a few, but no matter when we try to put a diaper and pajamas on her, she just loses it and throws herself around and cries.
Lucy has a piggy bank in her room that is breakable so we keep it on a high shelf. She loves to look at it and “feed” it when we bring it down and let her. So two nights ago I had the idea to tell her that she could feed the pig if she put a diaper on. And it worked! And then we let her feed the pig again after she got her jammies on. I’m sure you can see where this is going . . . directly to our award for parents of the year, obviously. 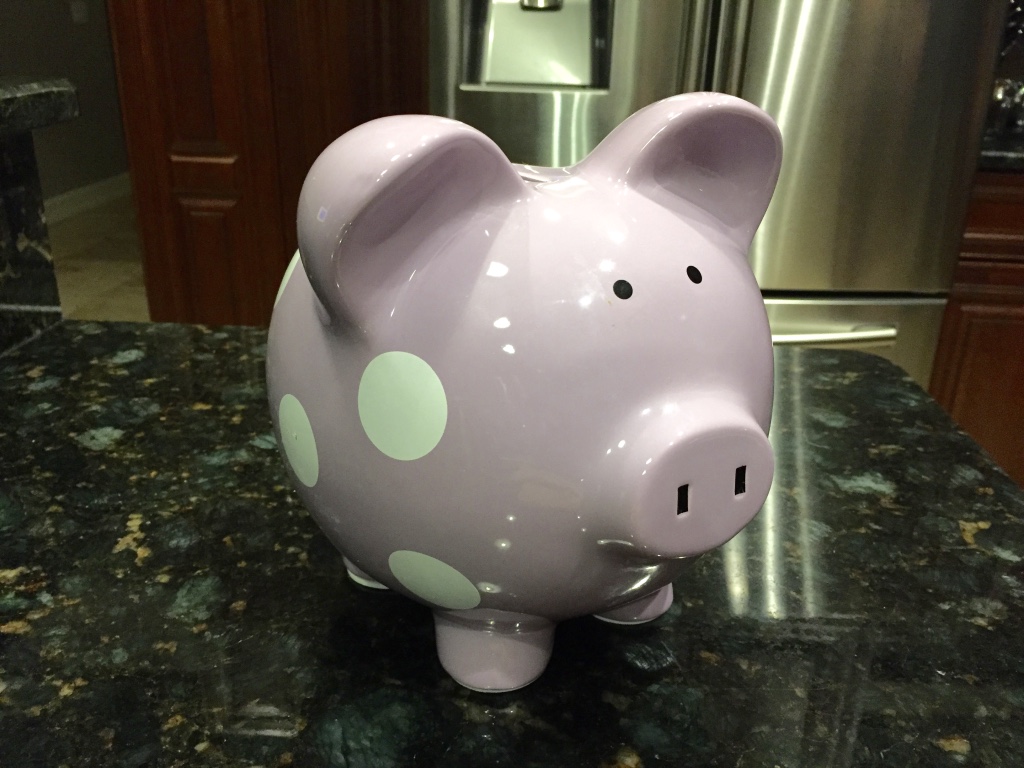 We tried it again last night and it worked fairly well. However, there are two problems: 1. We don’t want to go broke trying to get our baby to sleep every night and 2. Money is dirty and we didn’t like the idea of Lucy touching it and then going to sleep. So, what do two desperate parents do? . . . we take the piggy bank out of the room, empty out all of the change that’s already been put into it and boil it! Ha! Yes, you read that correctly. We now have a tupperware full of nice and clean coins for Lucy to feed the pig, and it won’t cost us a thing. Except maybe our self respect, but we are fine with that. 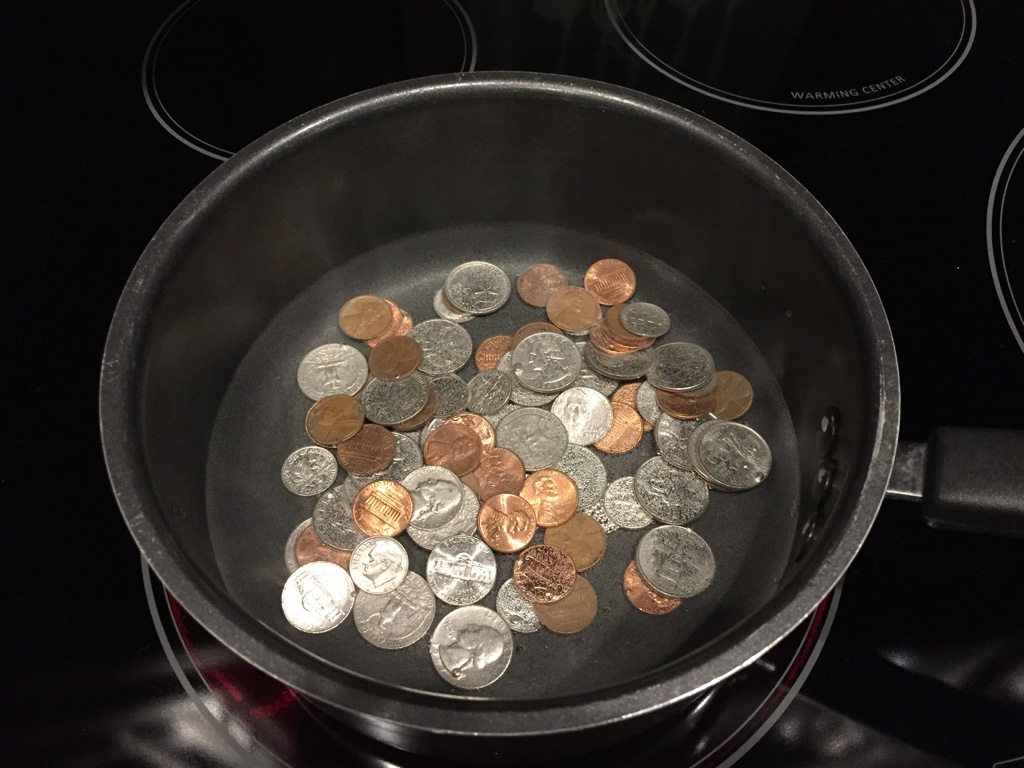 And finally, I saw this on Instagram the other day and totally agreed with it. If I ever win the lottery one day, it’s gonna be a toss up between who I hire first: a personal chef or someone to blow dry my hair everyday. Meal planning is one of our biggest struggles each week, and sometimes I dread Sundays just because I know we are going to have to discuss what to have for dinner during the week. 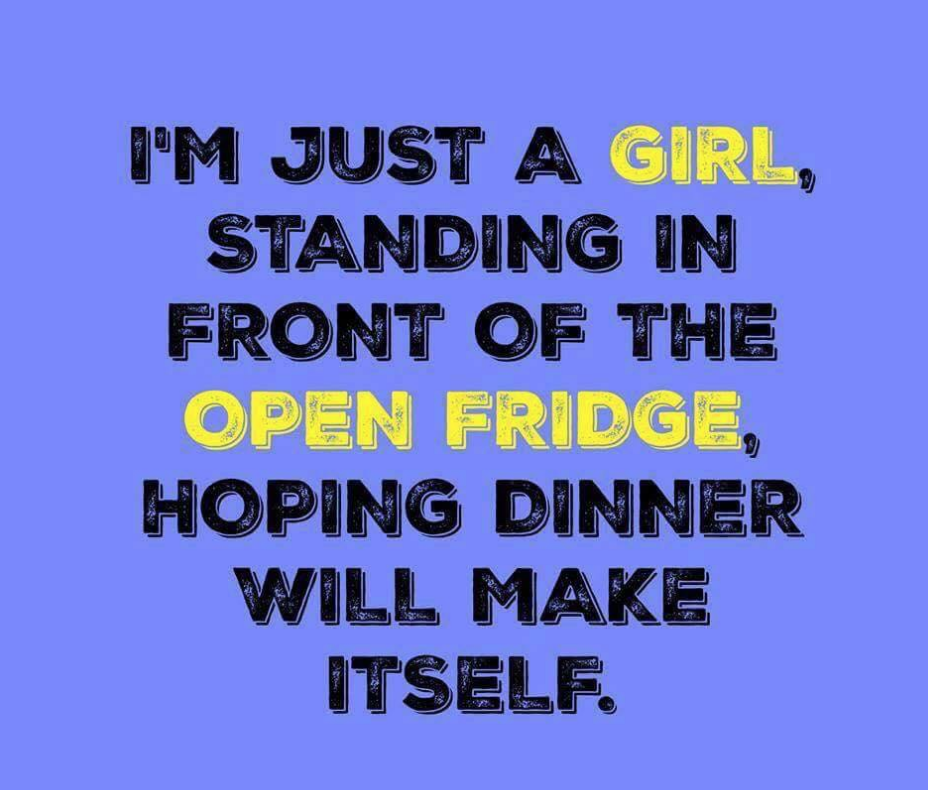 My moms group at church recently had a meeting all about meal planning. Funnily enough, I had to miss it due Fridgageddon, but they emailed the notes. The woman who spoke suggested coming up with 27 meals at the beginning of the month and planning/listing/grocery shopping/prepping them in advance as much as possible. I had to read it twice just to make sure I hadn’t misunderstood, and my thoughts were this:
1. Ain’t nobody got time for that
2. I don’t think I even know 27 meals
3. What about leftovers and eating out??
4. How big are her fridge and freezer?
So if you are wondering why I haven’t posted any recipes lately, it’s because I haven’t tried anything new or exciting in a long time because we are in a dinner funk! If you have any suggestions, feel free to pass them along.
Hope everyone has a great weekend. The weather is looking pretty nice, which is convenient because we have outdoor family photos for our Christmas card on Saturday morning. This will be the first time ever that we’ve paid to have our pictures taken. Usually we just do it ourselves or have our friends, the Heinbuchs, do it. However, this local photographer was advertising super cute Christmas mini sessions for a reasonable price, complete with adorable props and a real Santa Claus! Fingers crossed that there’s a lot of smiles instead of tears!
XOXO