As I sat down Sunday evening to type this post, I commented to Matty that this weekend seemed like a blur and he totally agreed. We were busy busy busy, and we had one major hiccup: NO HOT WATER! So we have a tankless hot water system in our house which, until a few days ago, has been awesome. We have as much hot water for as long as we want. Well, Tuesday morning about halfway through my shower that hot water ran out . . . and I had to finish off with cold water! Over the next few days, we’d have hot water for 60 second intervals. Time yourself in the shower sometime. Unless you’re rushing like crazy and don’t have long hair, 60 seconds is not enough!
So someone was supposed to come out on Thursday to fix it, but the part he needed didn’t arrive until Friday and then he was too busy so he came out Saturday afternoon. After working on it for five hours, something went wrong and instead of at least having 60 seconds of hot water . . . we had no hot water at all! We Kissels like our showers, so this was not super convenient. I hadn’t washed my hair in several days, and we had a picnic for Matty’s work on Sunday and I was not going to go looking all crazy haired! Matty suffered through a cold shower Saturday night which was quite entertaining to observe! I have a membership to our city rec center, so I got up bright and early Sunday morning and showered there. It wasn’t the greatest, but at least it was warm! So the guy came back for several hours on Sunday, and when we returned from Matty’s company picnic we had hot water! Oh, the things we take for granted!
Well, now that you’ve heard our saga . . . on to the Lucy pictures!
Lucy still gets three bottles of milk a day, and her doctor has strongly encouraged us to eliminate the bottle by 18 months. We’ve tried a few times, and Lucy was not happy about it so we gave up. The other morning she walked out from her room and saw me get out her milk. She ran over and grabbed her empty sippy cup and brought it to me . . . and we haven’t looked back! She does still get a bed time bottle, but we’ll work on it. 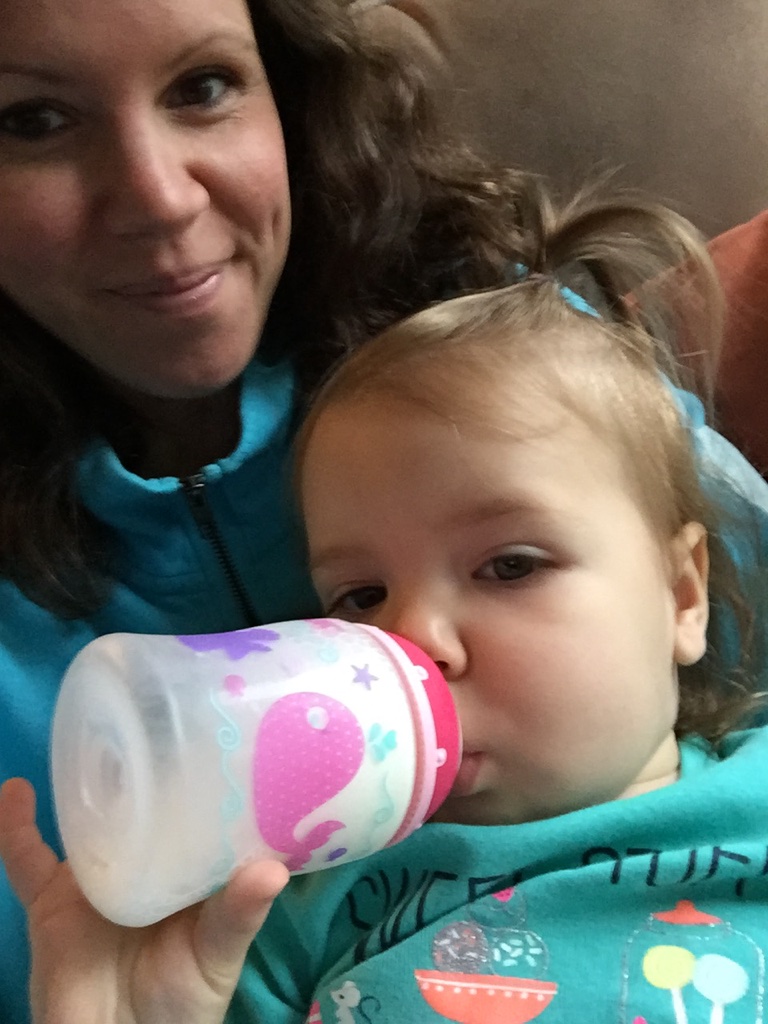 This is how we do Target now. We’ve started letting Lucy toddle around when we go certain places. However, she doesn’t understand that sometimes she can’t, and she’s started throwing fits when I try to put her in her stroller. It’s been lovely. 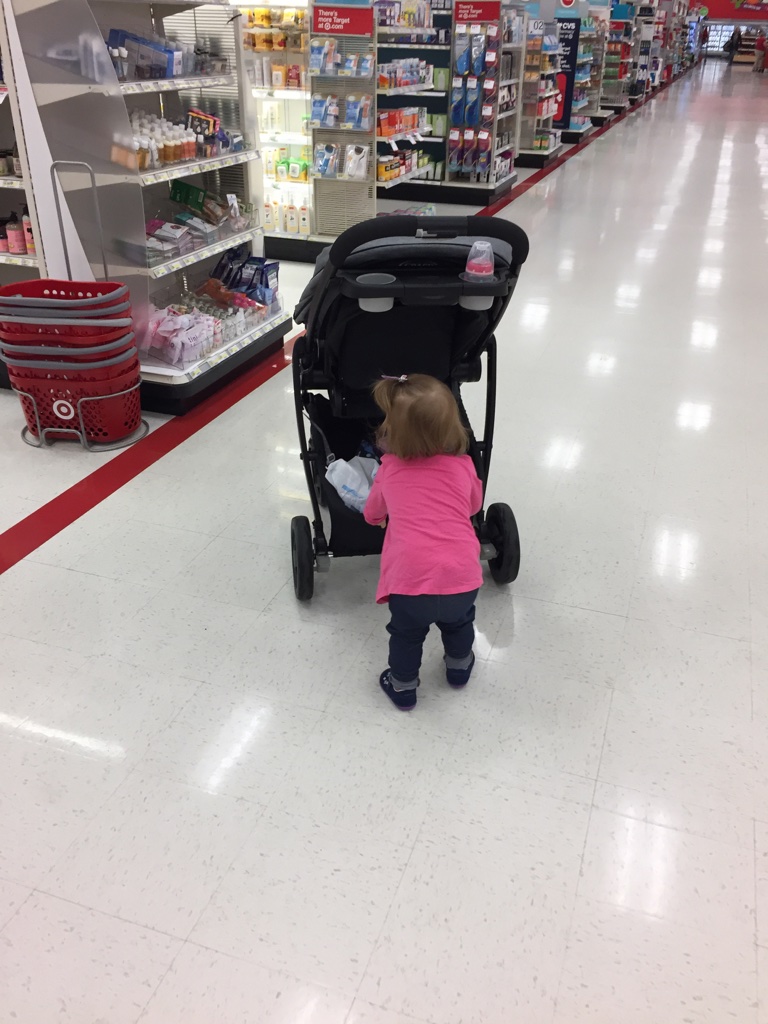 Went to Kohl’s to exchange two pairs of pants for Lucy, and came back with all of this! The fall clothes are so cute, and they were so cheap! How could I resist? 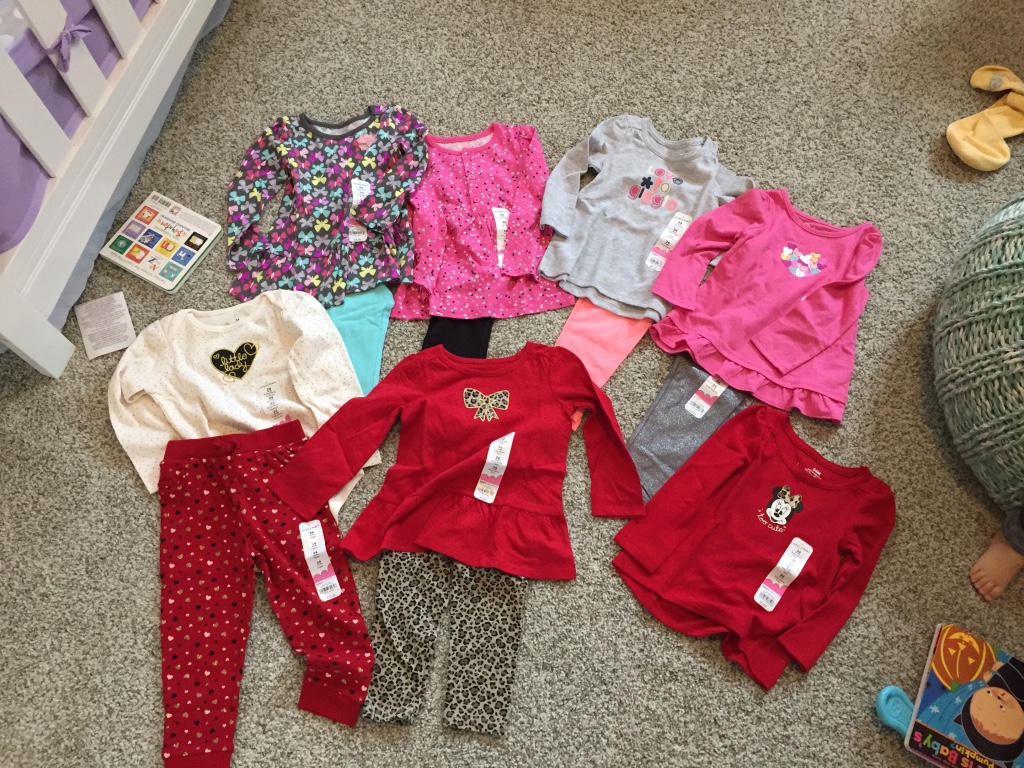 Realistically, with another baby on the way, I’m four . . . maybe five years away from having a neat Tupperware drawer again, right?? It keeps Lucy busy while I make lunch, and the clean up keeps me busy while she naps. ugh! 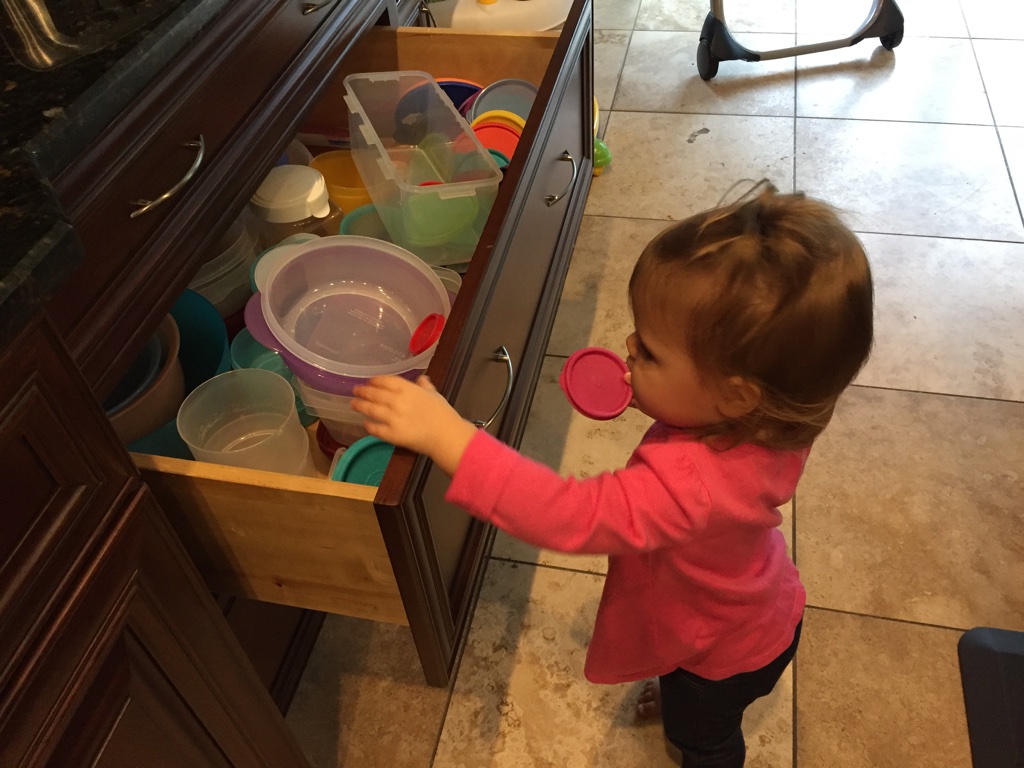 Nap time on Thursday was ROUGH. I was not feeling the greatest, Lucy had gotten up early, we were stuck inside again because of the rain, and that sweet baby would NOT go to sleep. I tried everything. I even tried letting her cry it out, but she just kept crying! For the first time ever, I went in and got her and brought her into our bed thinking she’d relax with me and fall sleep. No such luck. But she looked super cute while driving me crazy! 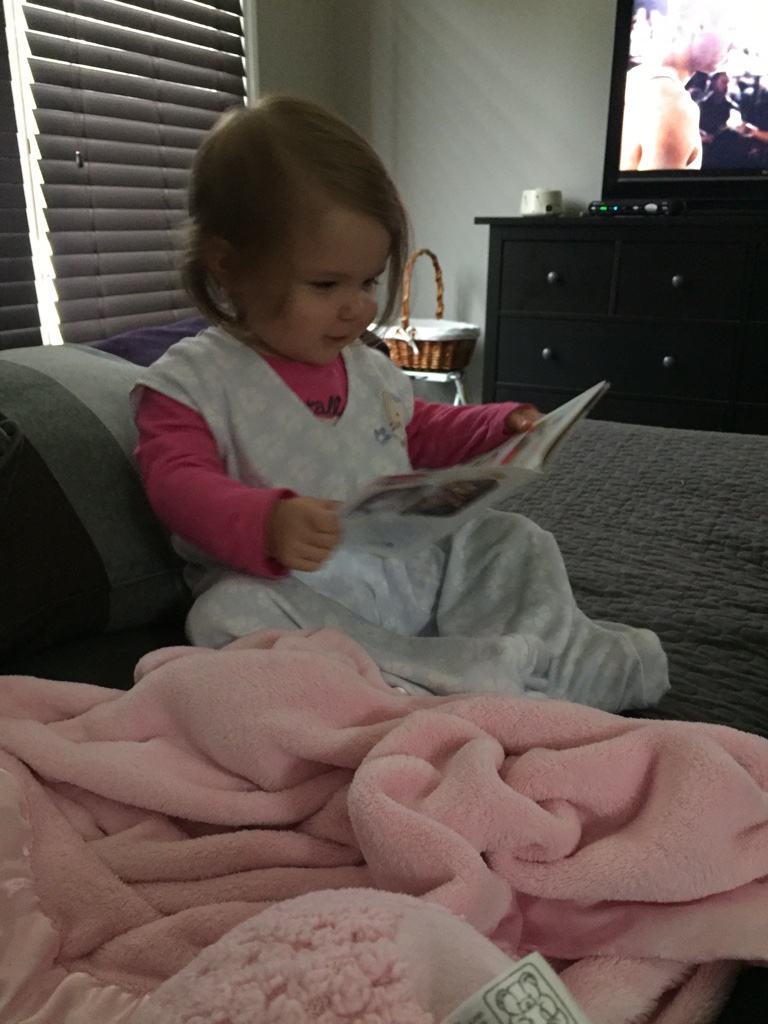 She was too cool for the grocery store on Friday morning. 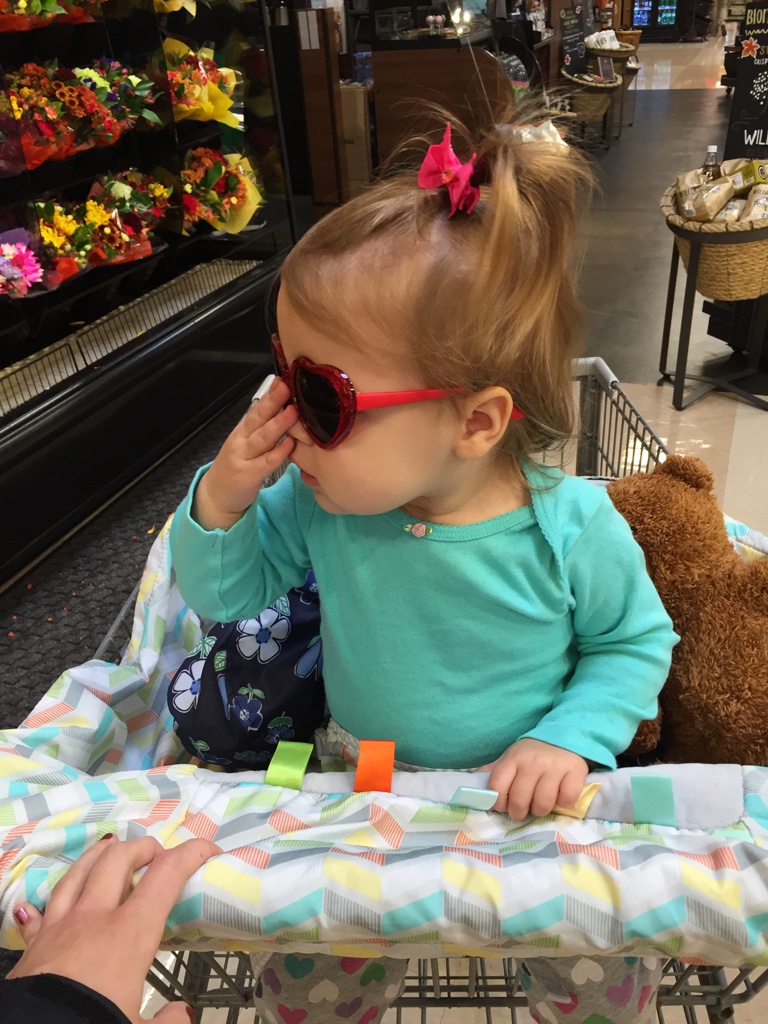 Grandma Rita brought Lucy a red wheelbarrow. Lucy pushes it around by resting it on her love handles. Matty and I think it’s hilarious! 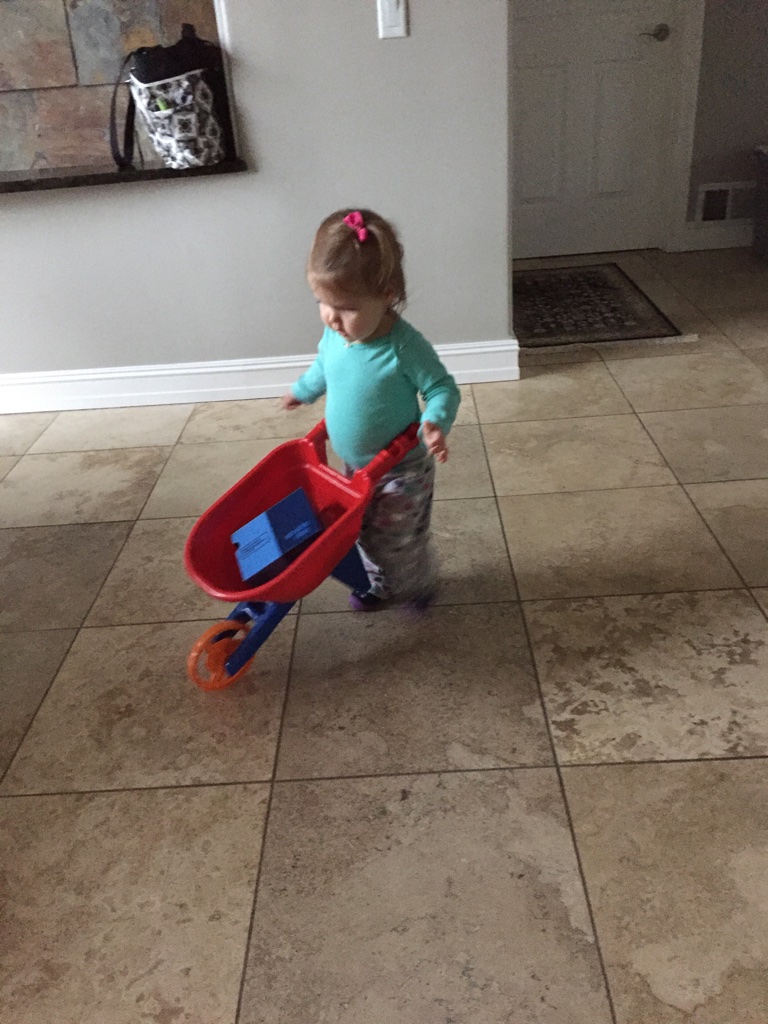 I accidentally dropped an orange while unpacking the groceries. Lucy grabbed it, and it kept her busy for about 20 minutes while I put things away and made lunch. She threw it, rolled it, wiped it clean, offered it to the dingos. It was well worth sacrificing the orange! 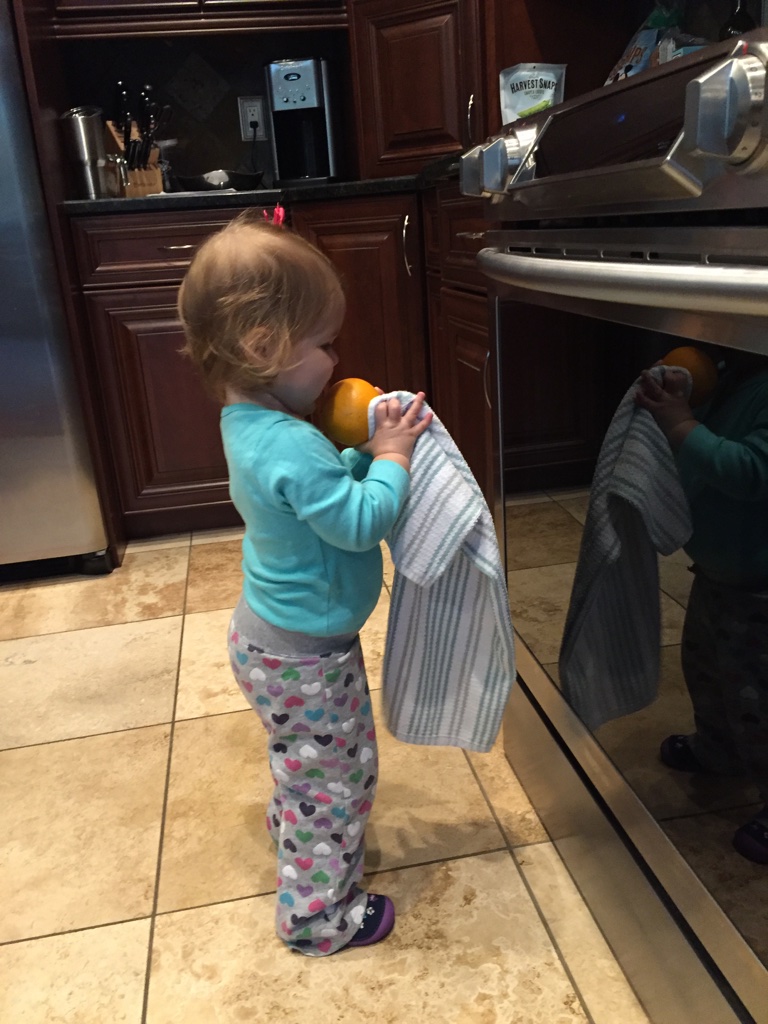 Went to Lowe’s on Friday night because we’re crazy like that. Lucy loved these Halloween decorations! 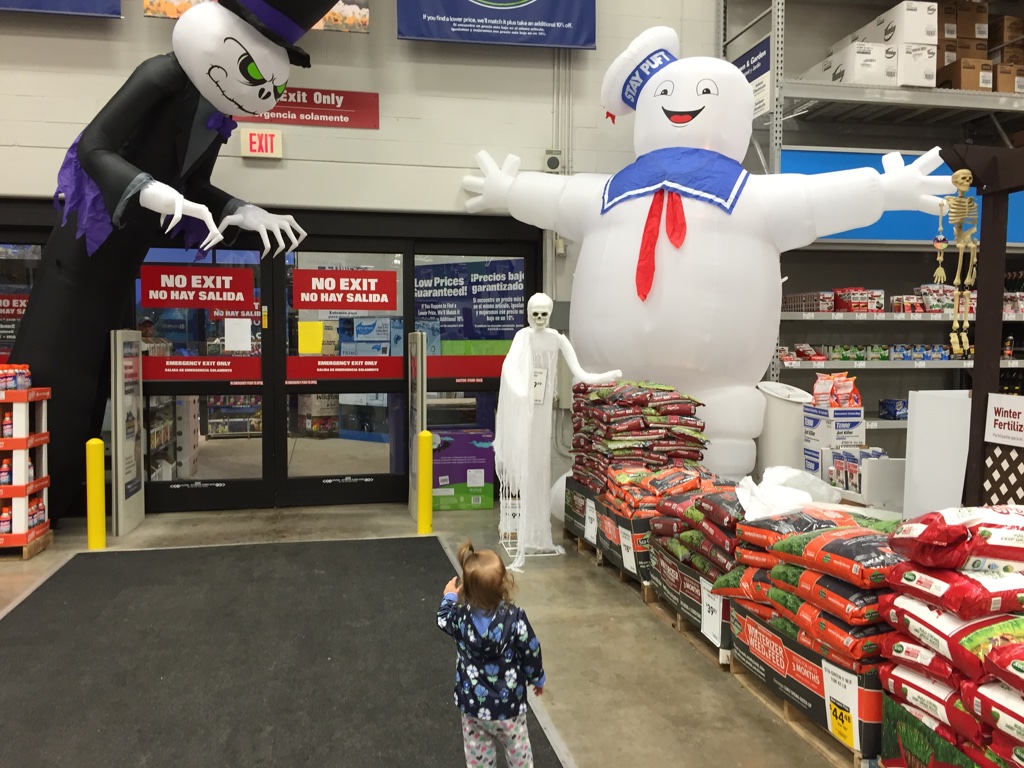 Glow in the dark skeleton pajamas because October is here! 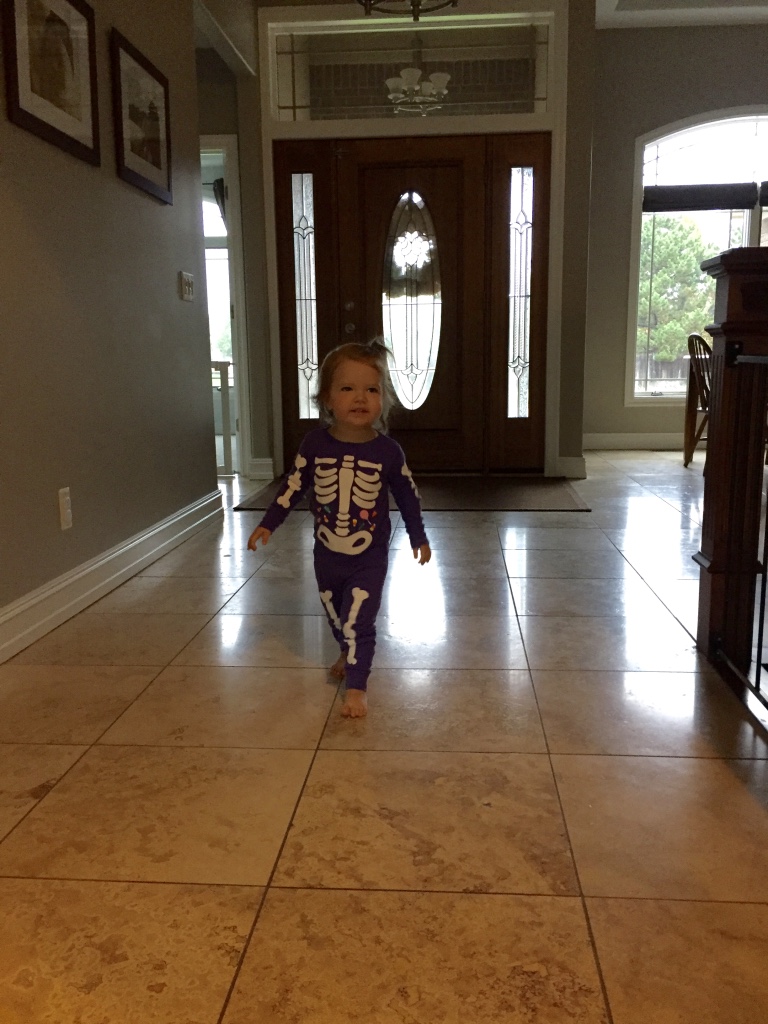 Target for the second time this weekend! Why do they put their stuffies so low on the shelves?? 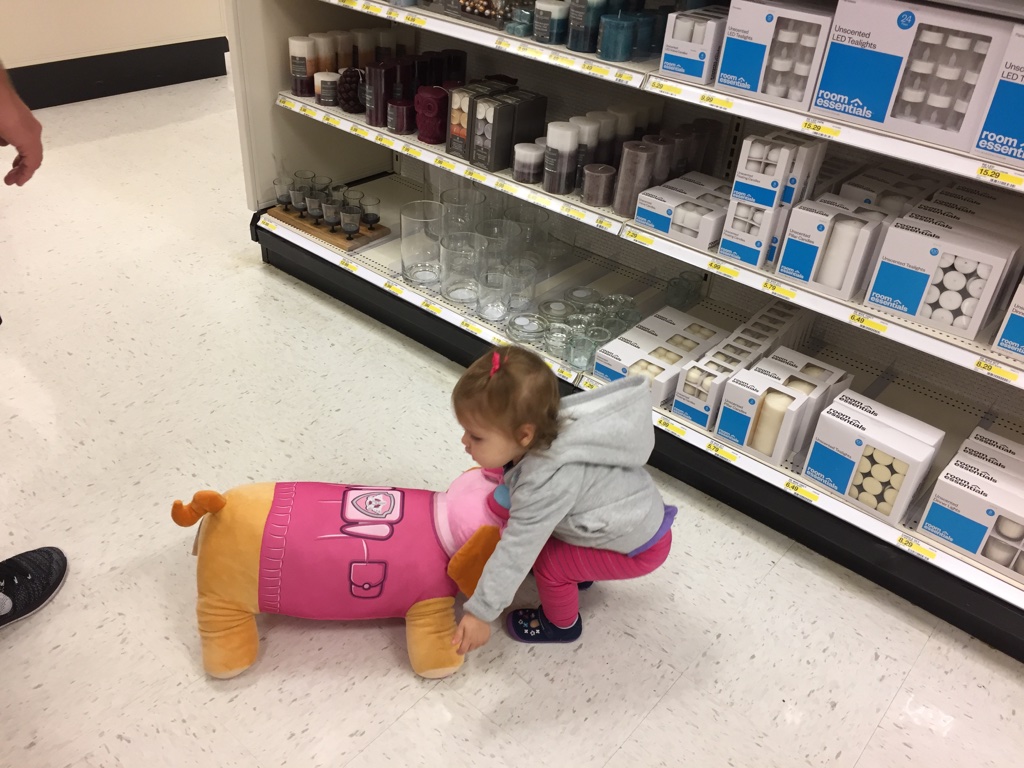 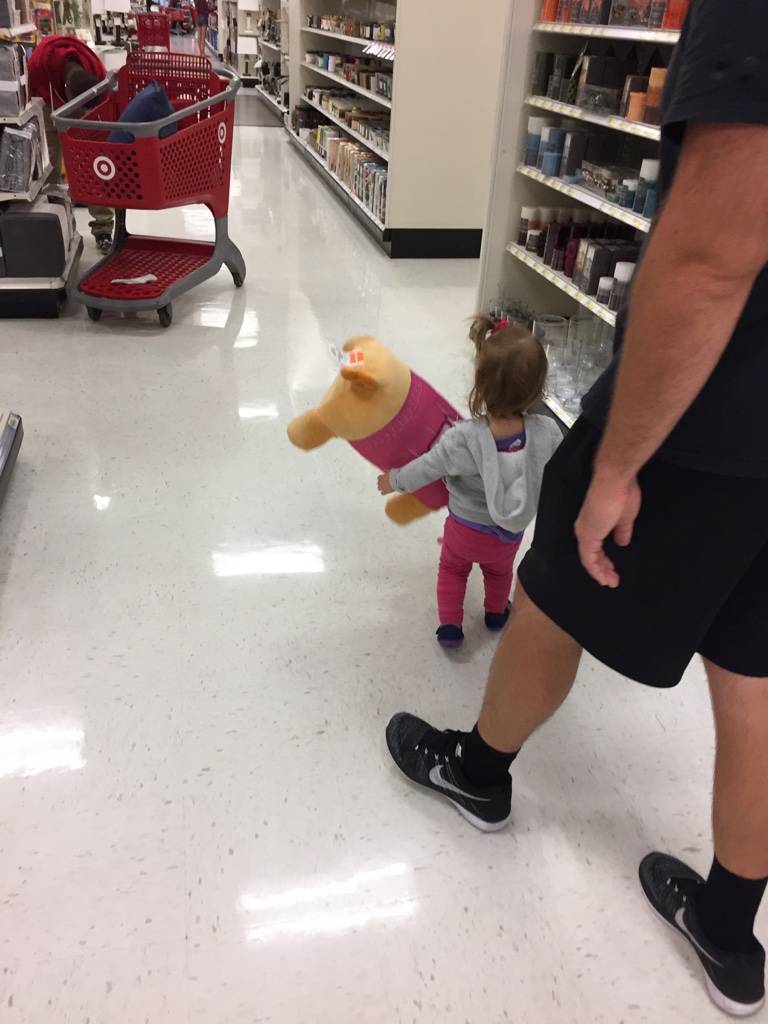 Three lovies, one blanket, and one pillow . . . she likes a soft base! 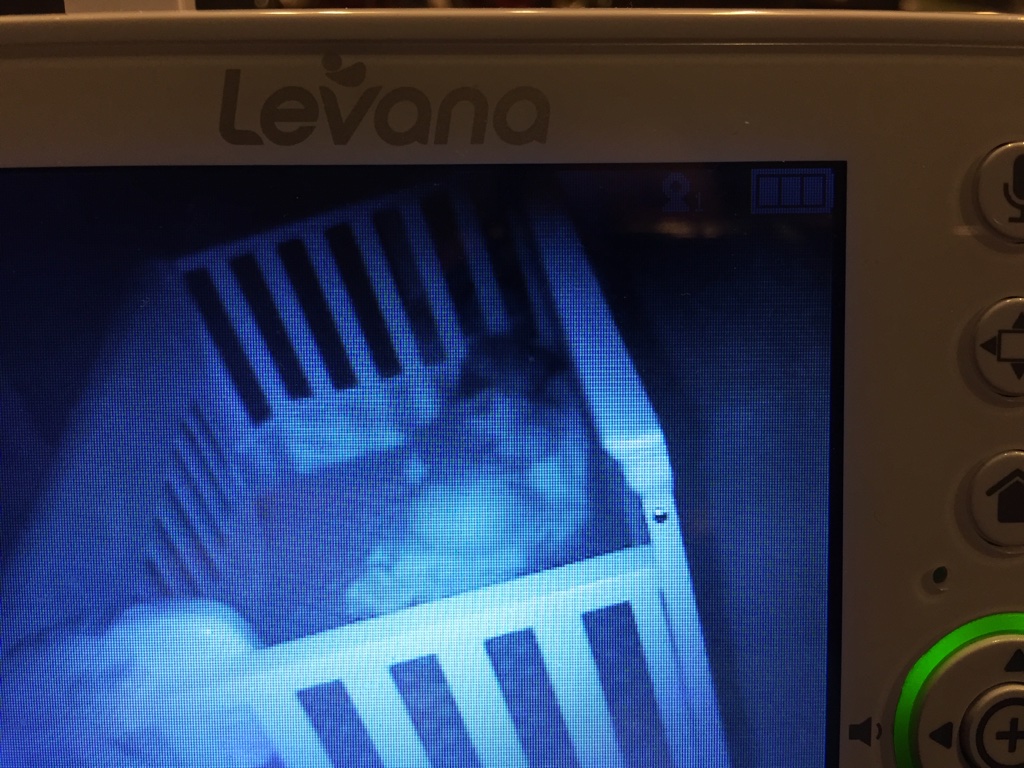 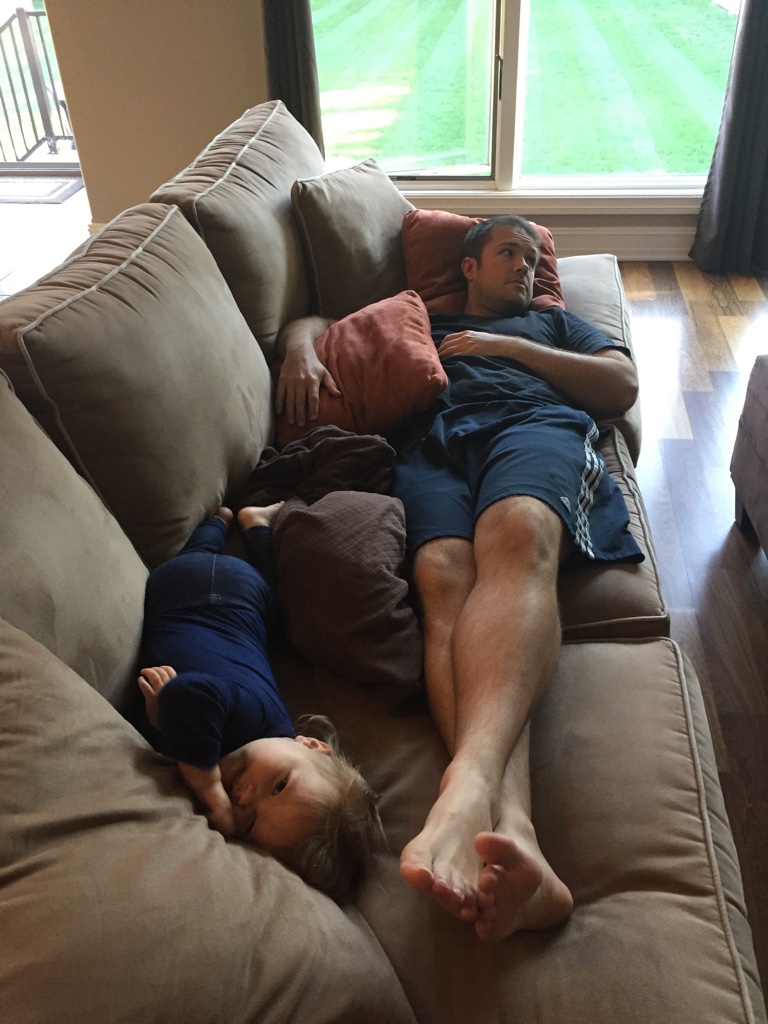 So since the night we found out we were having another baby, we’ve been seriously considering moving to a bigger house. We love our house, but the bedrooms aren’t that big and there’s not a lot of play space, especially once we turn the only extra room we have into a second bedroom. So we looked at a lot of houses, considered building a new one, but in the end decided the financially responsible thing to do is to stay put. Sometimes being an adult is no fun! We also got a quote to finish our gigantic basement. Turns out that’s also not in our budget. You know what is, though? A few upgrades that we now plan on doing around the house.
Matty’s first choice was a new lawnmower. He’s quite the lawn guy and had only ever had hand-me-down mowers. That came to an end this weekend when he got his dream mower. It’s 9″ wider than the average lawnmower, so it’s going to cut down on his cutting time . . . which makes me happy! 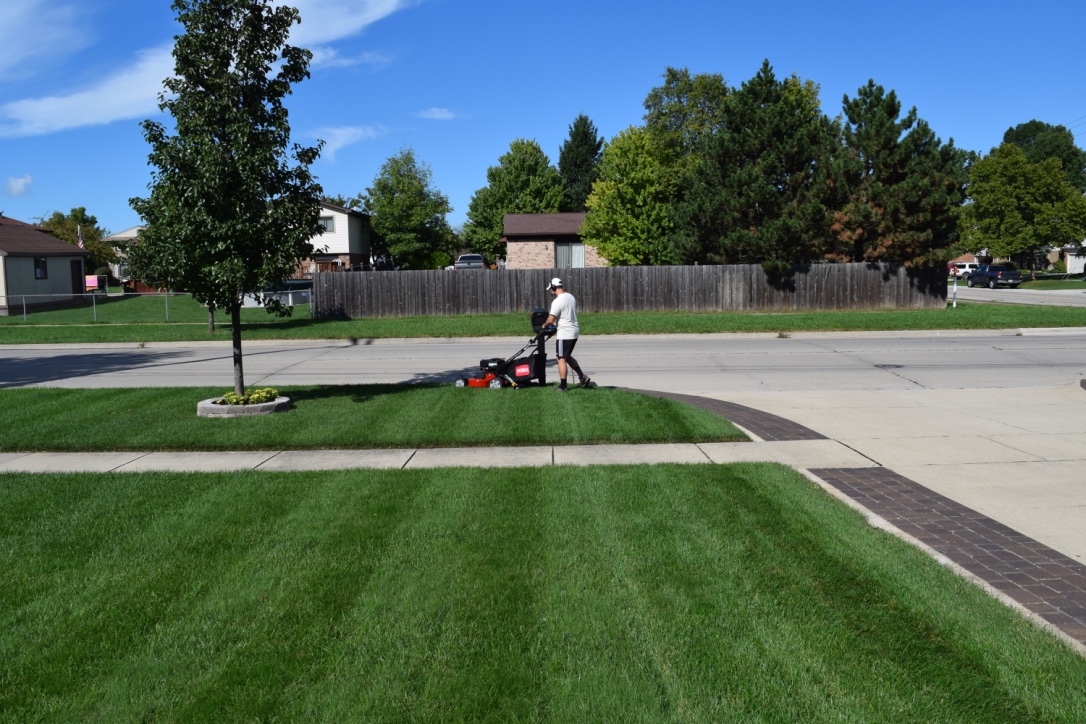 That’s one happy guy! Wait until you see what I chose to upgrade . . . should be ready in a few weeks! 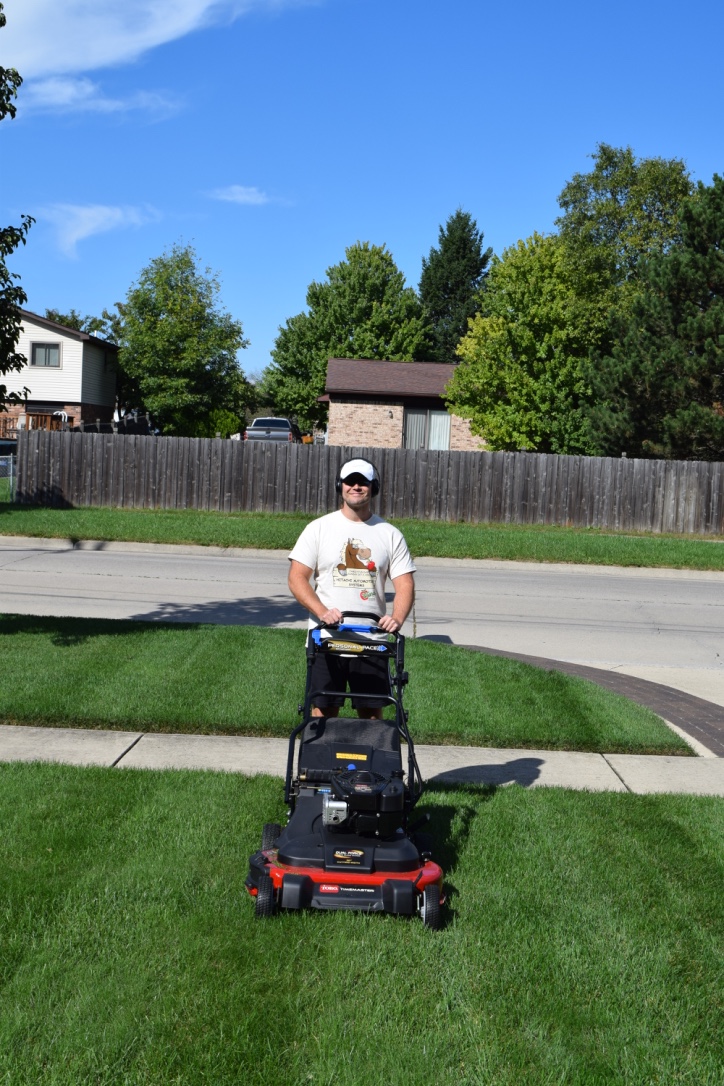 A big part of our Sunday was a company picnic that Matty’s work had at Wiard’s Orchard. It was a great day, but I have a lot of pics so it’s going to get its own post on Tuesday. 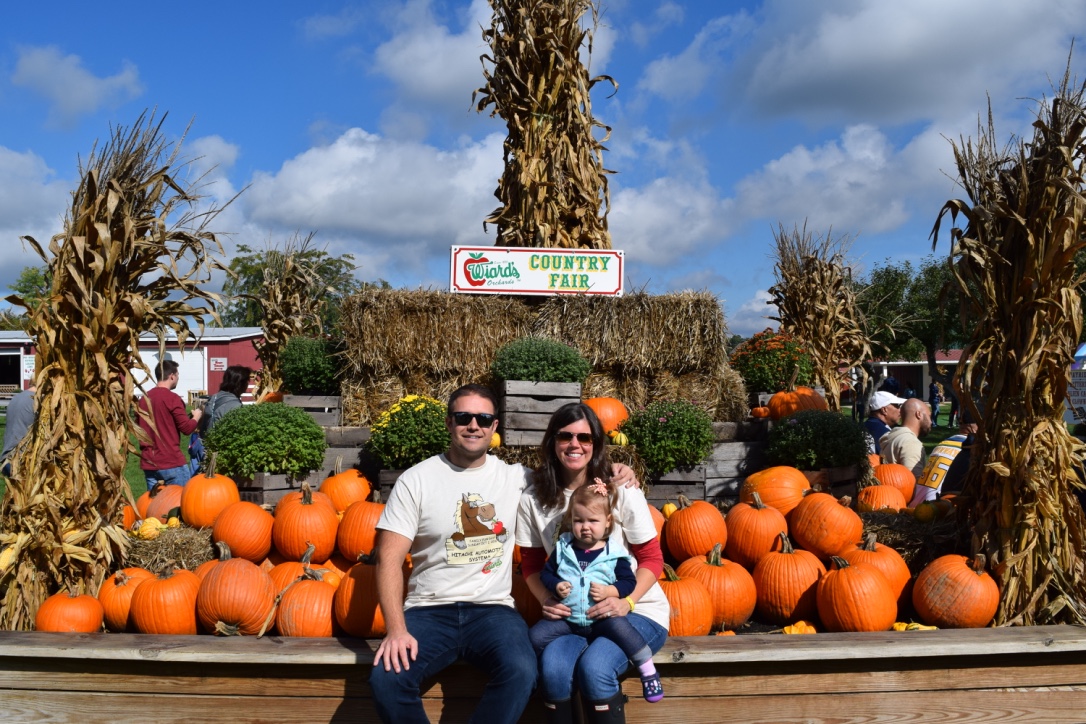 So that’s about it. Everyone got nice long showers (or in Lucy’s case a bath) this evening, and we are ready to tackle another busy week!
XOXO