I feel like life lately has been a little nutty around here. Matty’s been working late and having conference calls in the evening, Lucy seems to be auditioning for the role of fussiest baby ever, and I’ve just had a lot on my mind about random projects and things that need to get done. Oh, and I started another class. So I know these pictures will paint a different picture but, trust me, this sweet baby has been off her game for about ten days now. There doesn’t seem to be anything wrong with her other than she’s incredibly fussy . . . which is frustrating!
Whenever possible, I try to let Lucy have as much independence as I can while eating. She showed interest in dipping her pancakes in plain yogurt last week, and here’s the result. 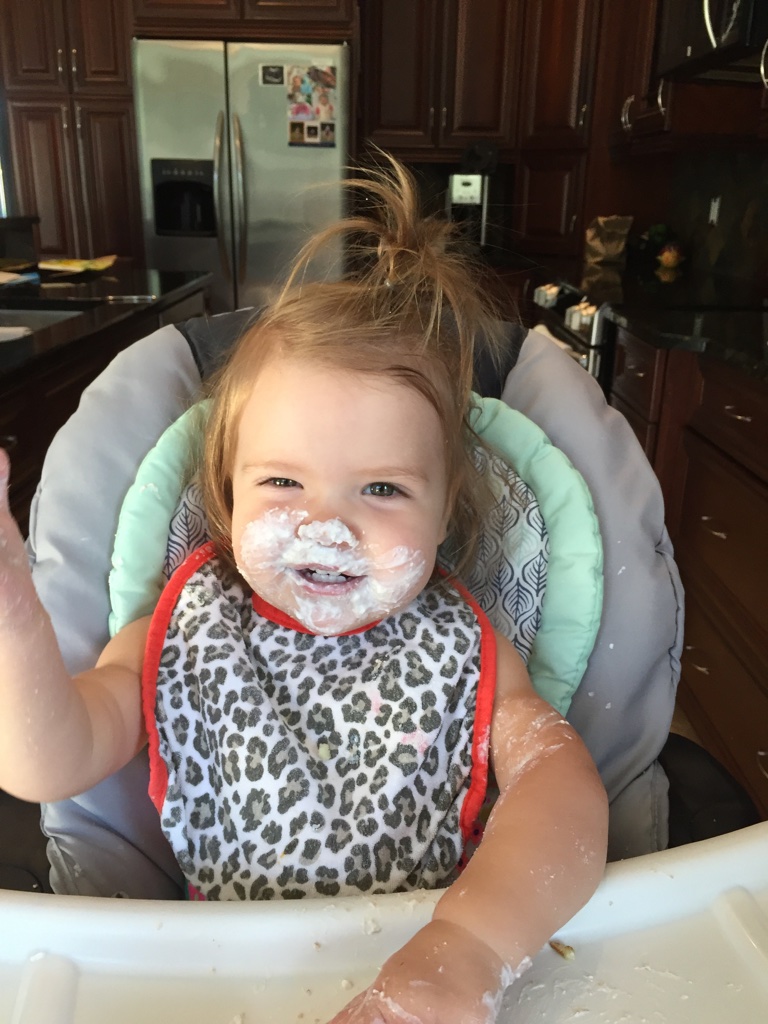 We had a little mama/daughter date at Panera, and I made sure she was eating things that weren’t going to be too messy. Which was good because I forgot to pack a bib! 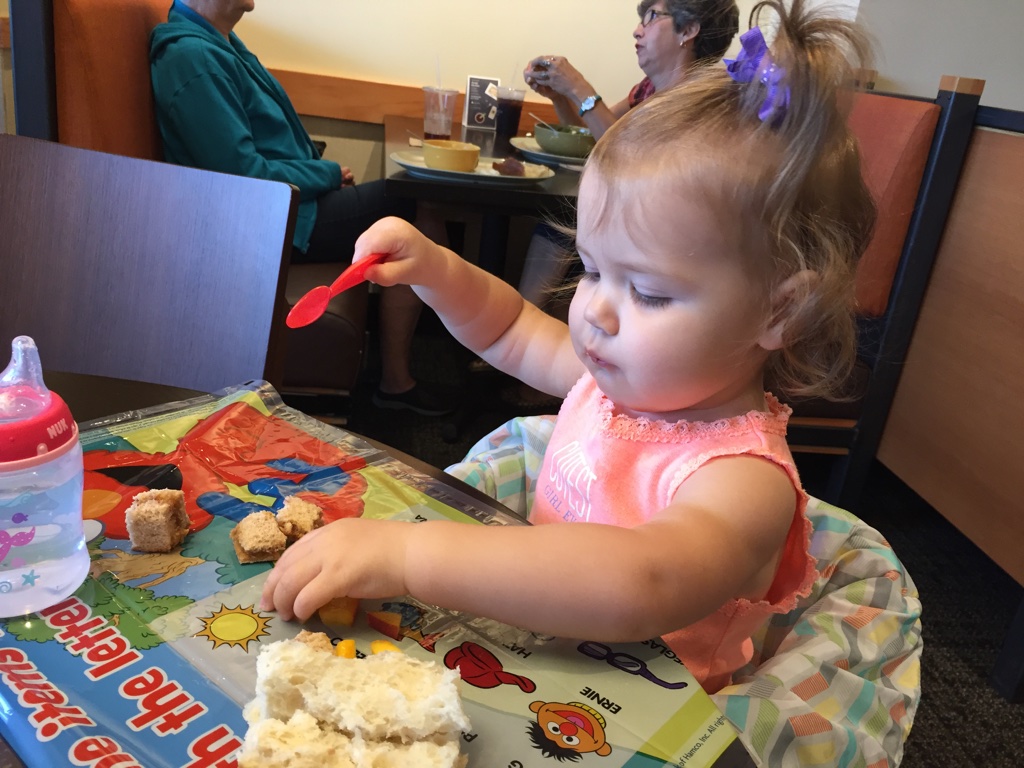 And in the last of the Lucy and Her Food collection is this snapshot of the new plate and cup my mom bought her. I love the divided plates, however I seriously cannot give it to her unless all the spaces are filled with something! 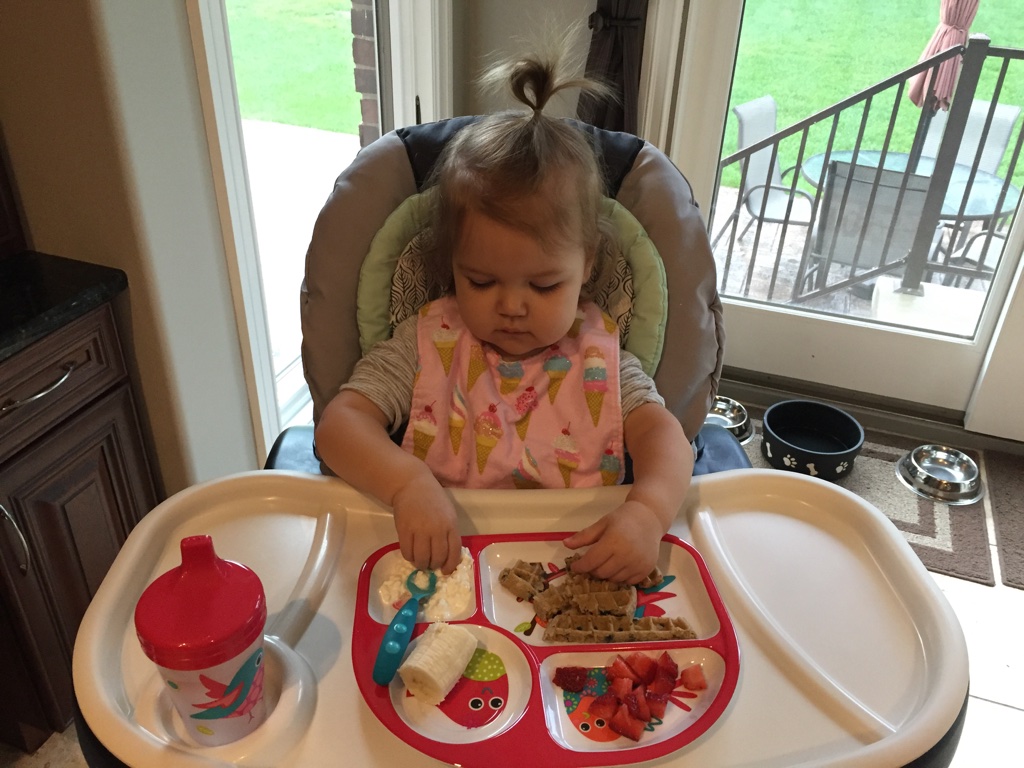 This is Lucy trying to negotiate a puppet trade at the library. The other little girl had a cheetah shark that Lucy really wanted, so she offered her this horrible rodent type thing instead. The other girl wasn’t having it and luckily things didn’t escalate! 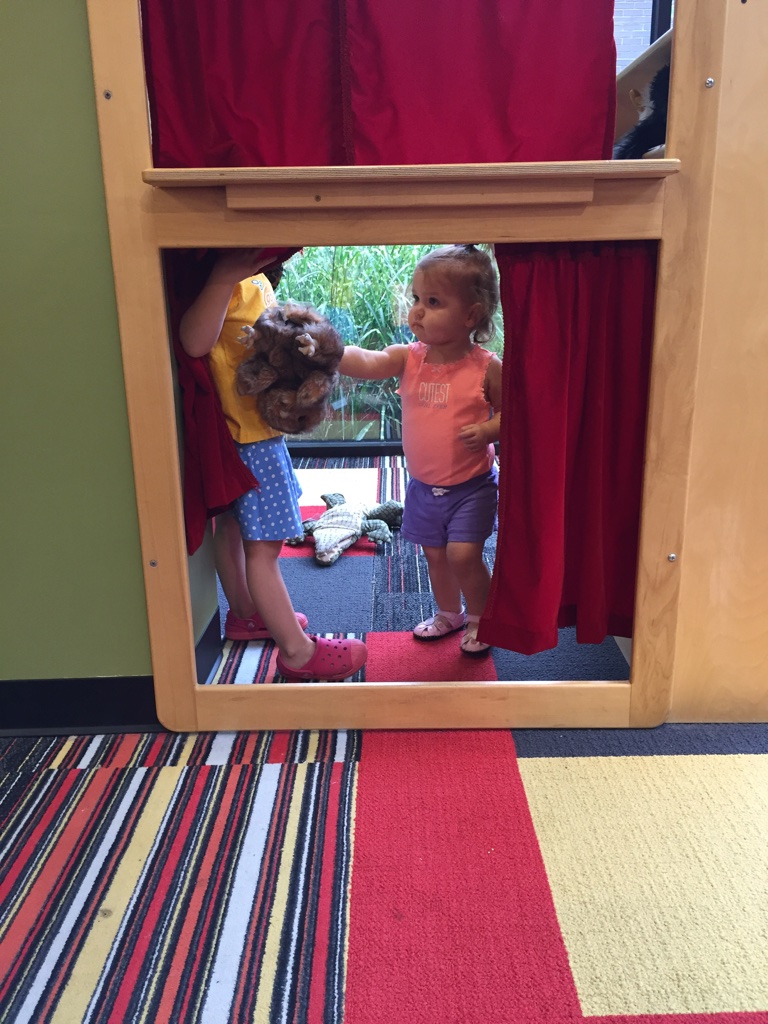 We allowed this to take place just long enough to snap the pic. This is not a regular occurrence. The only reason Lu got in was because we told her no when she looked at us. She is testing us like crazy lately! 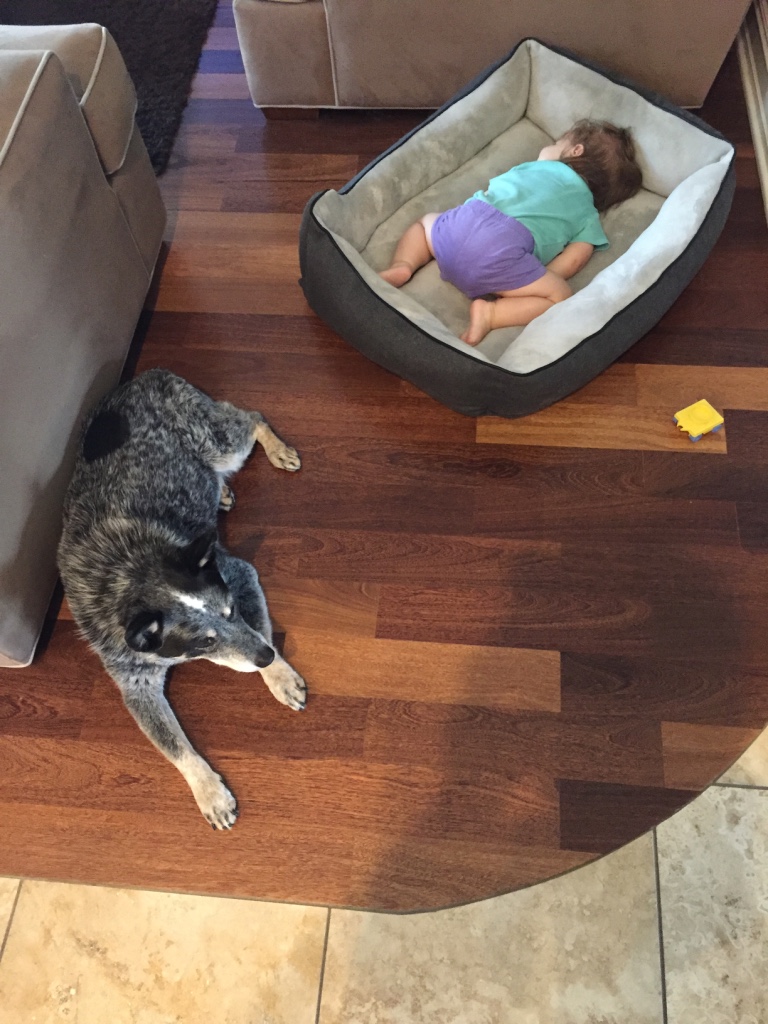 We stopped by Aunt Carla’s garage sale on Friday just long enough for Lucy to swipe two stuffies, scrape her knee, and have a graham cracker. Look at that adorable profile! 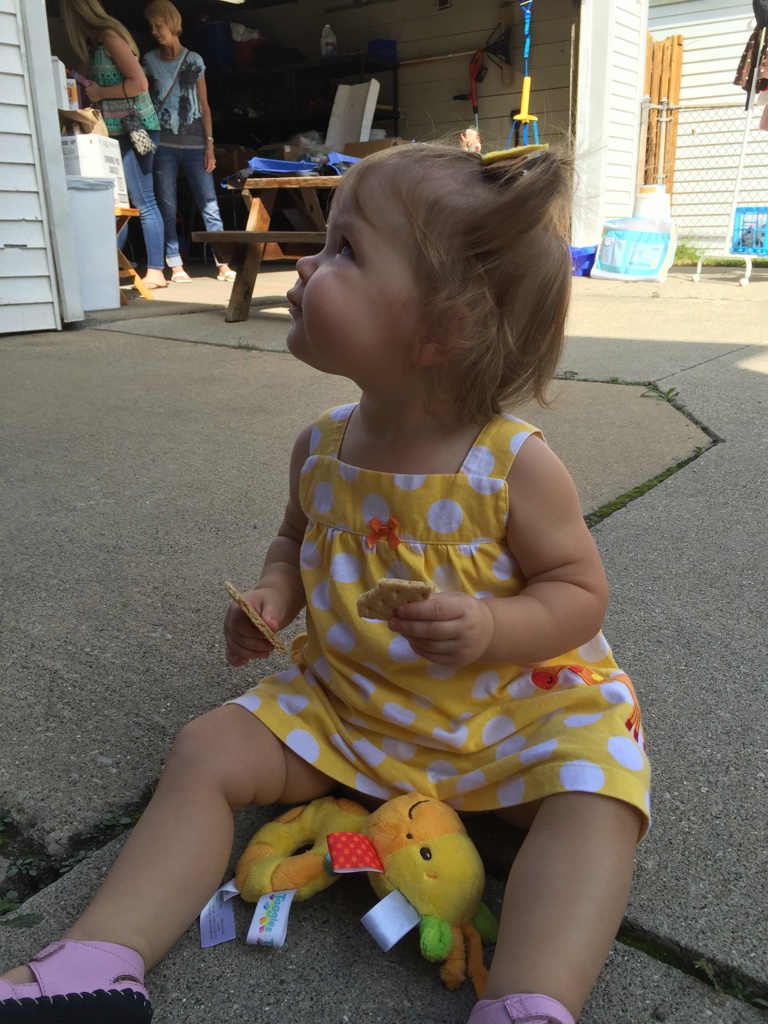 Nap time back at Oma’s after the garage sale. It’s tough eating graham crackers and riding in the stroller! 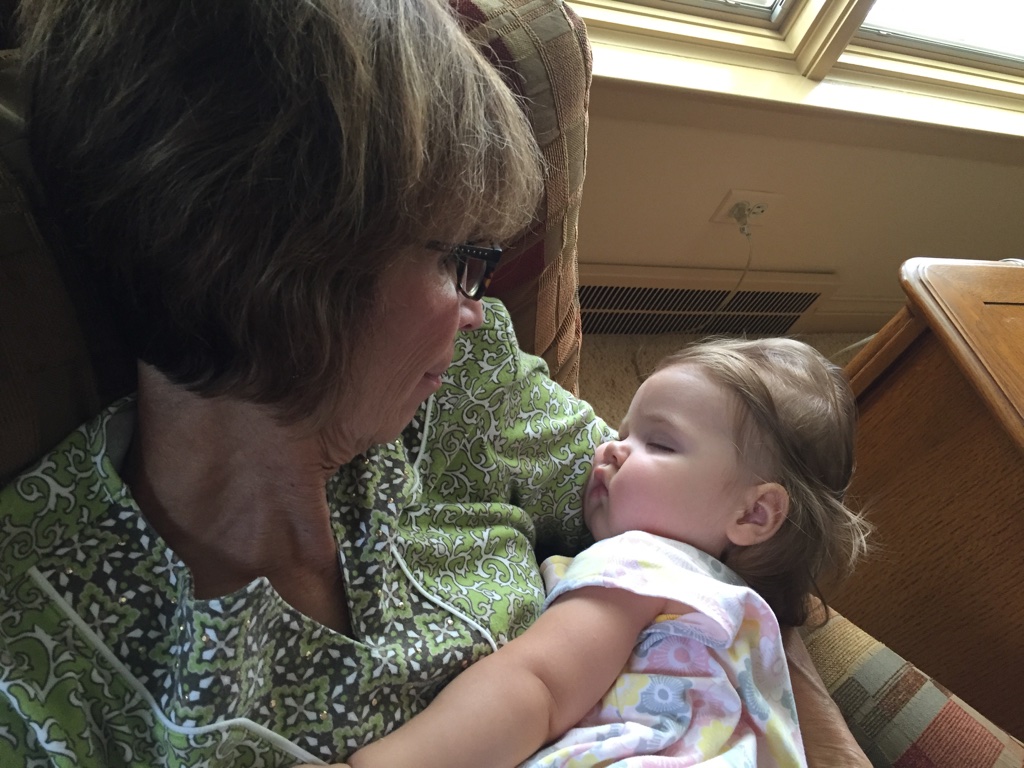 Friday night was a beautiful evening so we left the stroller at home and let Lucy toddle around the park. 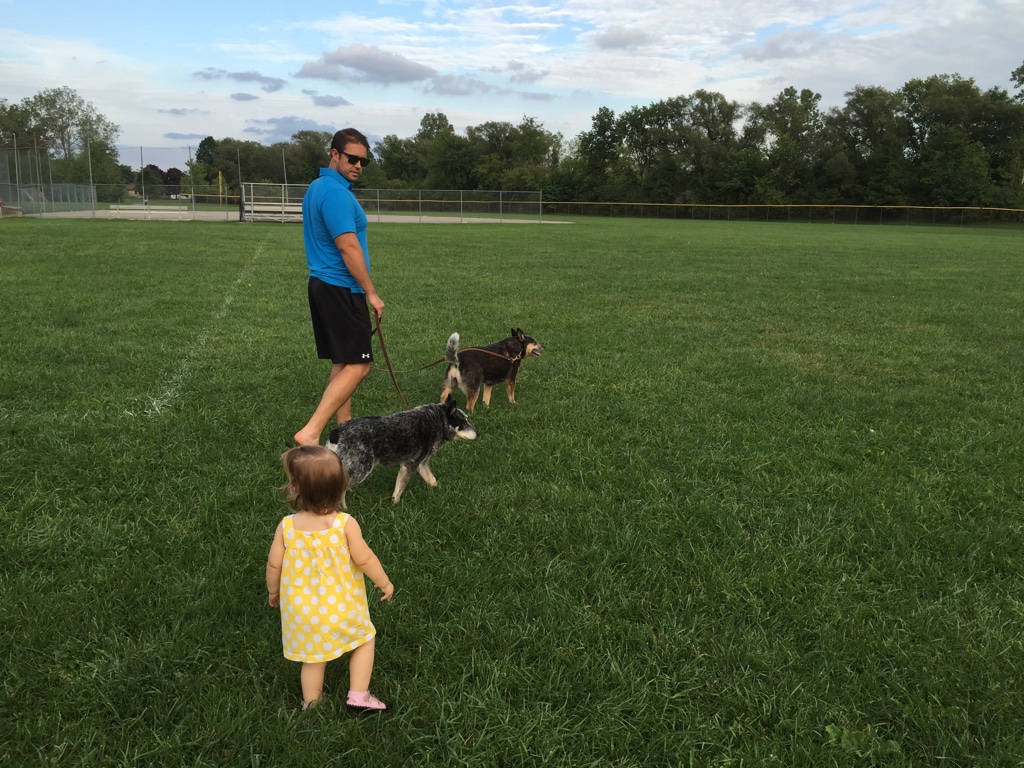 So earlier this summer Costco was giving away samples of their Key Lime Pie, and it was the most delicious thing I’ve ever tasted. And I don’t even care for pie! I went back to get one for the cottage for the 4th of July but they didn’t have any. We were there on Saturday and they were back! But we had no reason to buy one, and they are so huge that they truly wouldn’t fit in our tiny freezer. It was so sad. 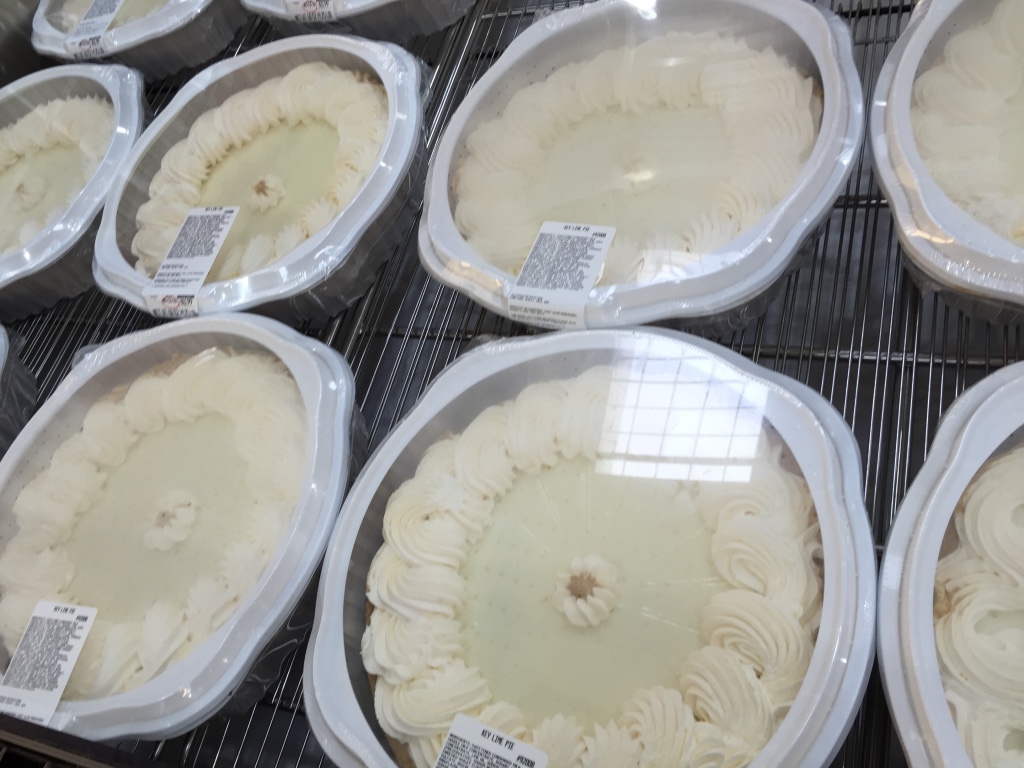 The cutest stuffie in the whole pile! 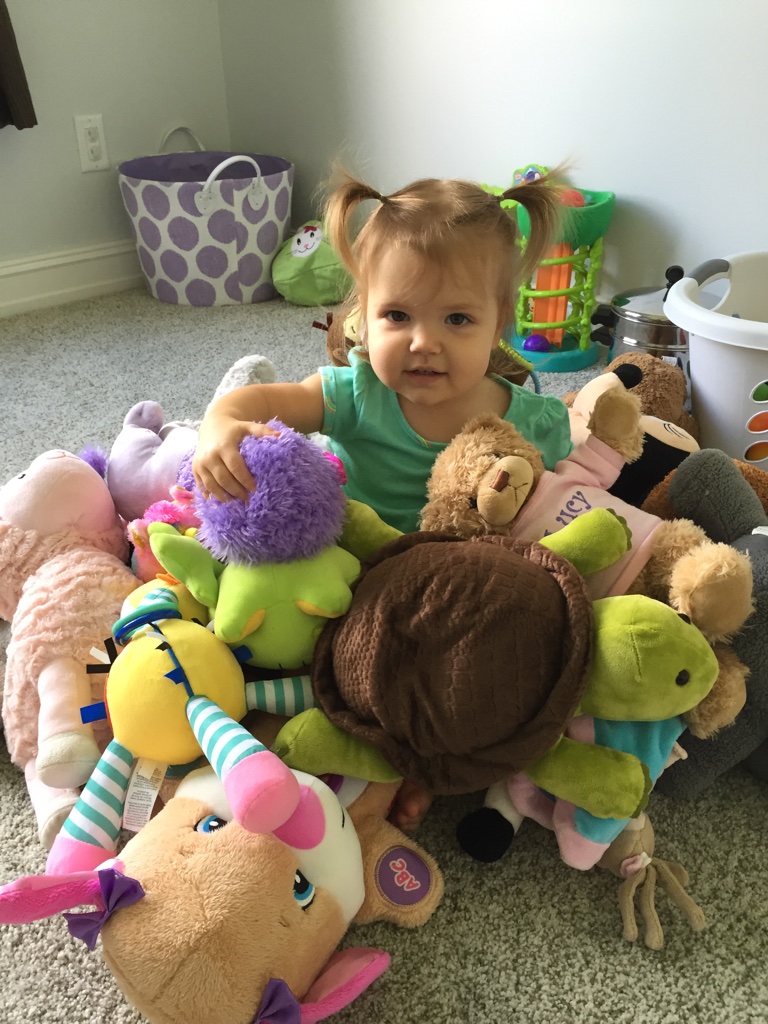 So it’s obvious in this picture that our closet needs some serious attention. I think it’s also obvious as to the reason why. If that sweet baby isn’t pulling things off the shelves, she’s sitting in the bins that I’m trying to organize! 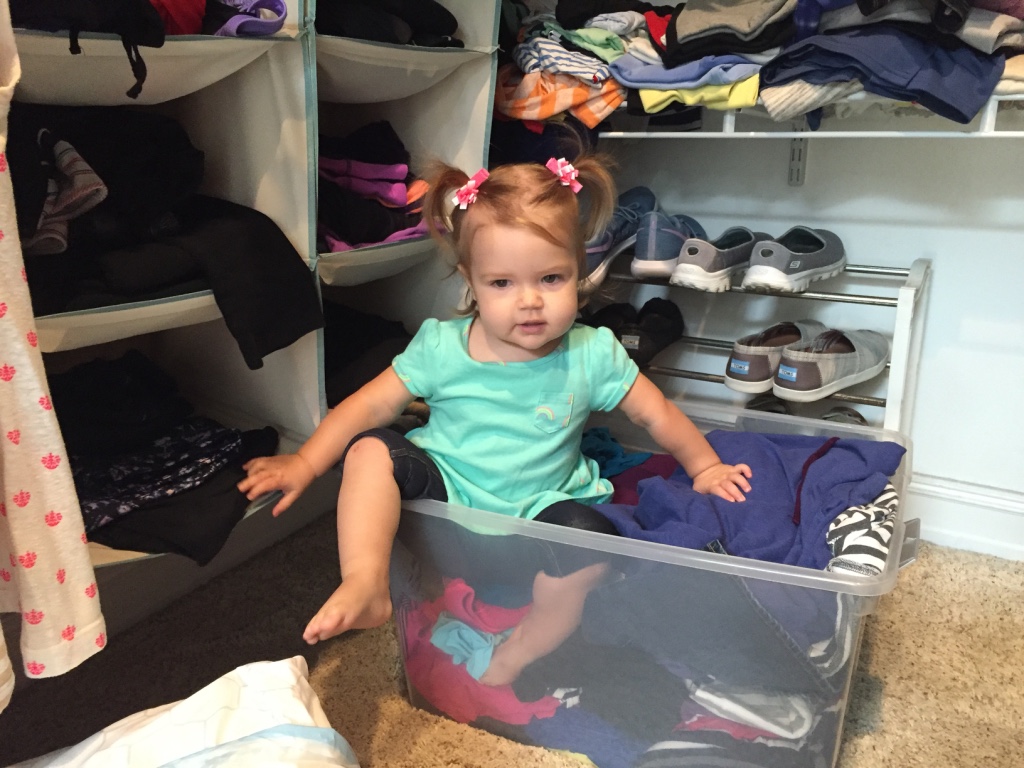 Our coasters are made from ceramic tile, and we don’t leave them out because we don’t want Lucy to hurt herself or break them. She knows she’s not supposed to touch them. However, she and Matty have developed a game where he leaves the coaster from his drink on the couch when we go to bed. In the morning, Lucy wakes up and runs right into the family room to find it and give it to me. She was feeling a little feisty the other day, though, and didn’t want to give it up. 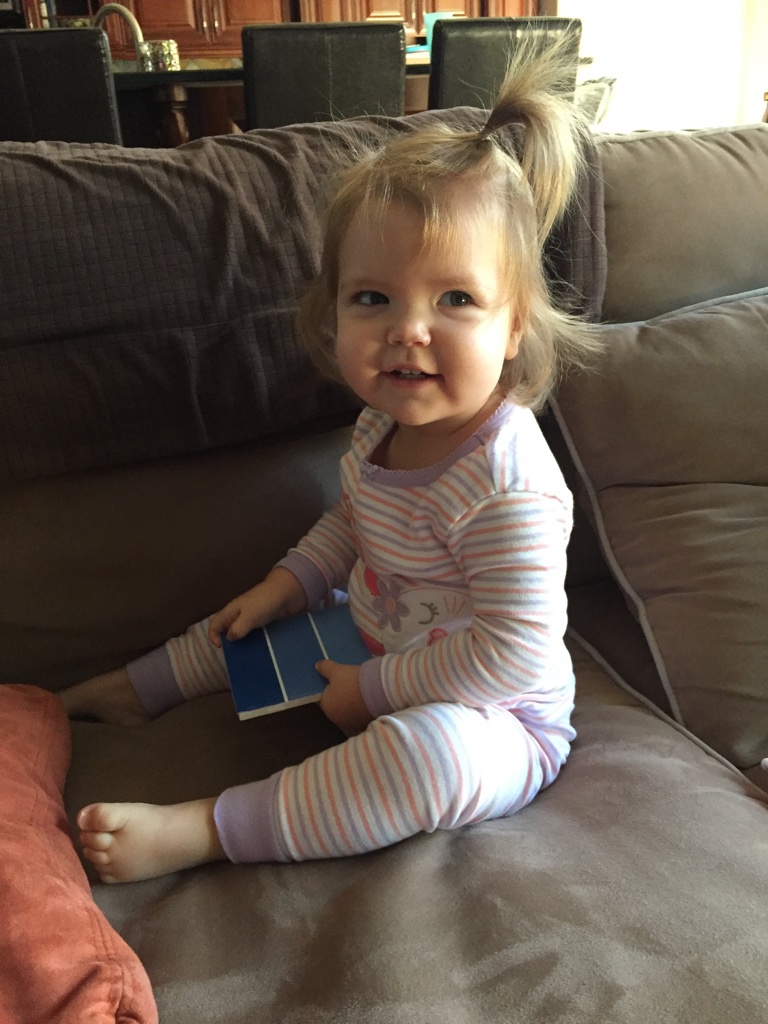 A few days ago Lucy and I were sitting on our bed waiting for Matty to change his clothes after work. He plopped down on the bed to join us and we heard a splintering sound and the foot of the bed collapsed! After we finished laughing, we realized we were going to have to do something to fix it because the mattress couldn’t stay on it. The frame is from Ikea, and they were not super helpful. They said our only option was to buy an entirely new bed. 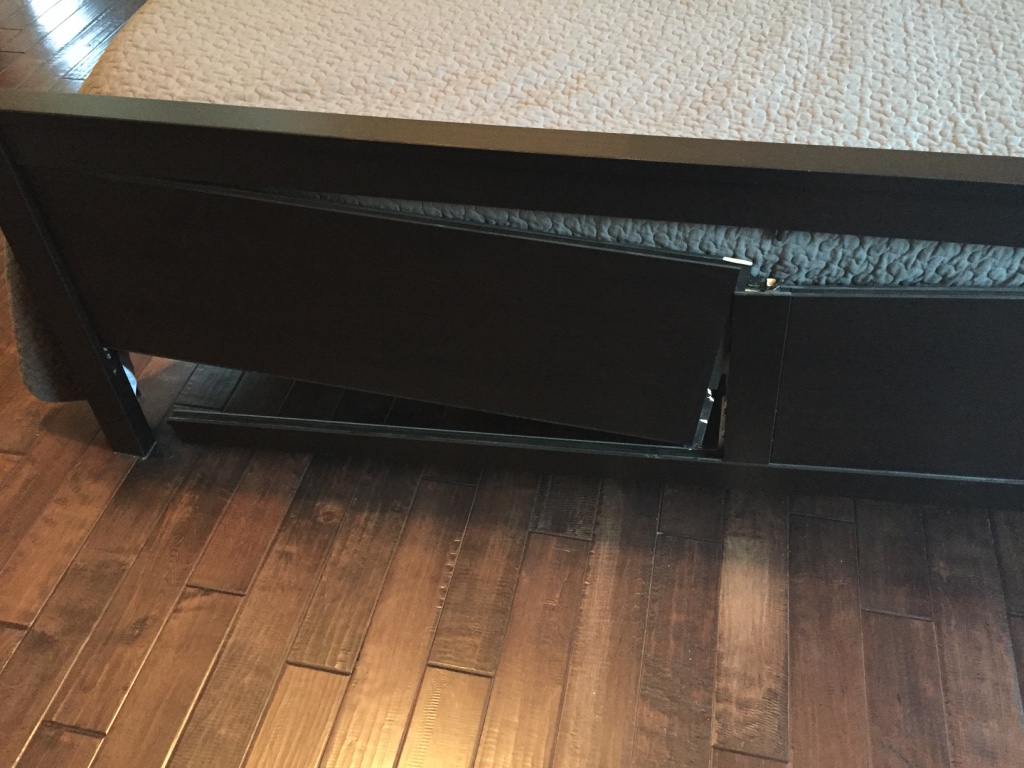 Well, we aren’t sure exactly what bed we want to buy, so our frame is currently being held up by a stack of my Harry Potter books. Why are the covers ripped, you ask? Because I left them on a low shelf in the basement and the dingos decided they wanted to use them as chew toys. Apparently, they liked what they read and wanted to see what happened to Voldemort in the end because last night we heard a little crash and Snort had pulled the books out from under the frame! #neveradullmoment 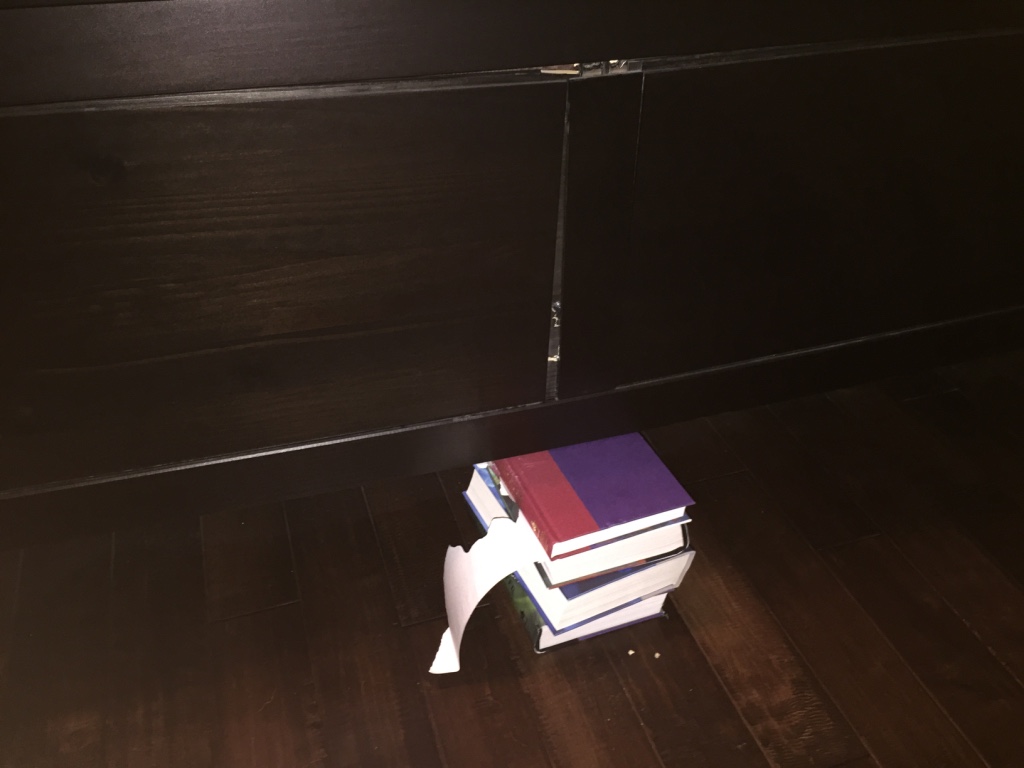 Spicing things up a bit! 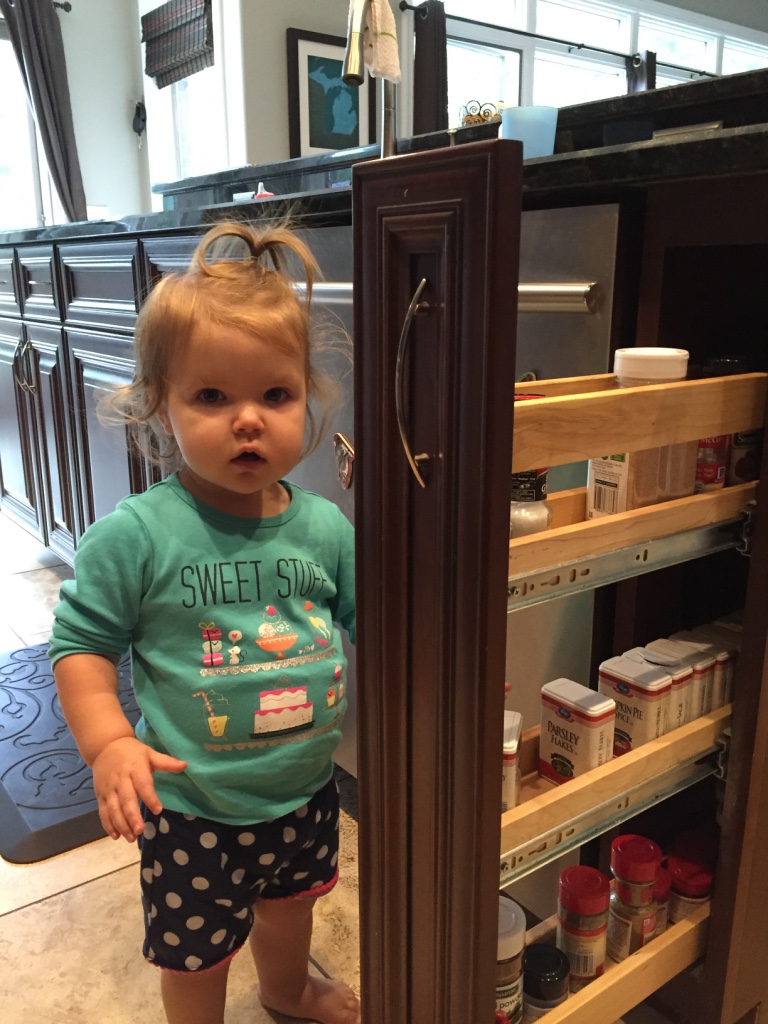 Look at that sweet face enjoying our evening walk! 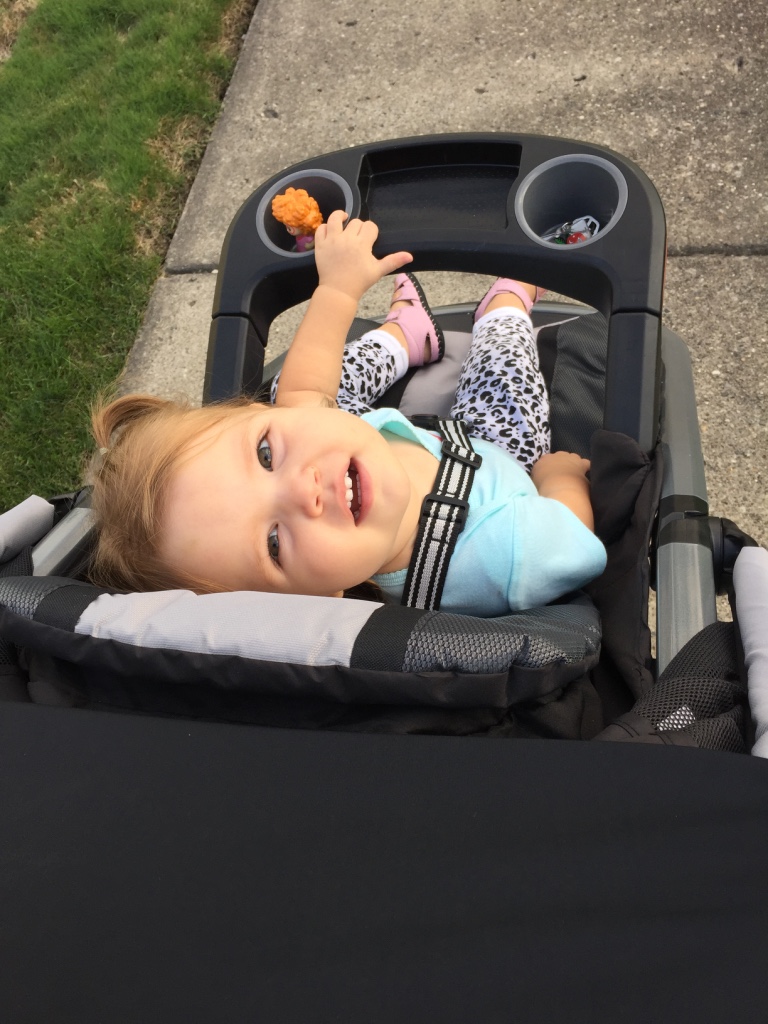 So that’s life lately. I’m definitely looking forward to the weekend. Mainly Sunday, though, because Matty’s going tailgating at the U of M game on Saturday. He’ll be gone all day so it’s just like another week day for LuLu and me. I’m going to have to think of something fun for the two of us to do.
Have a great weekend!
XOXO